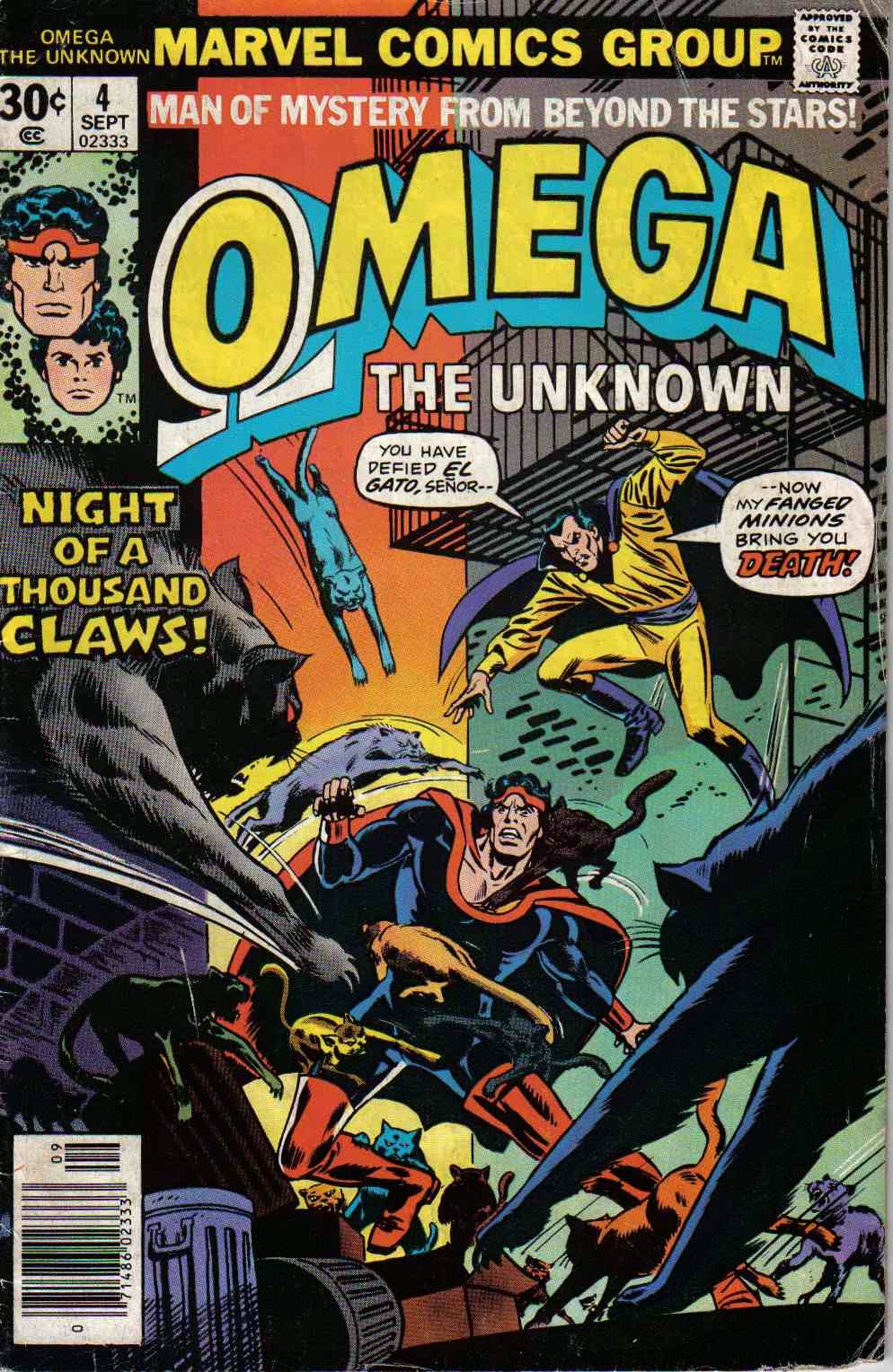 Steve Gerber, the legendary creator of Man-Thing and Howard the Duck, shares co-creator rights with Mary Skrenes on 1976's Omega the Unknown title. And while Gerber is the big name working on this mess, Skrenes has the more interesting background. A long-time collaborator of Gerber, Skrenes contributed charaters for both The Defenders and the original Guardians of the Galaxy. She was even the inspiration for Beverly Switzer, Howard the Duck's love interest...eww!...in both the book and movie versions. She has a long publishing history of horror stories under the pseudonym "Virgil North," adopting the false name due to an ongoing feud with DC editor Joe Orlando.

No matter how much talent was brought to this title, I'm still left scratching my head at the resultant book and character. Marvel labels Omega as the “Man of mystery from beyond the stars!” and I have to admit that many things about Omega mystify me. Like how does he gets wet wood to not only catch fire, but to continue burning in the pouring rain? 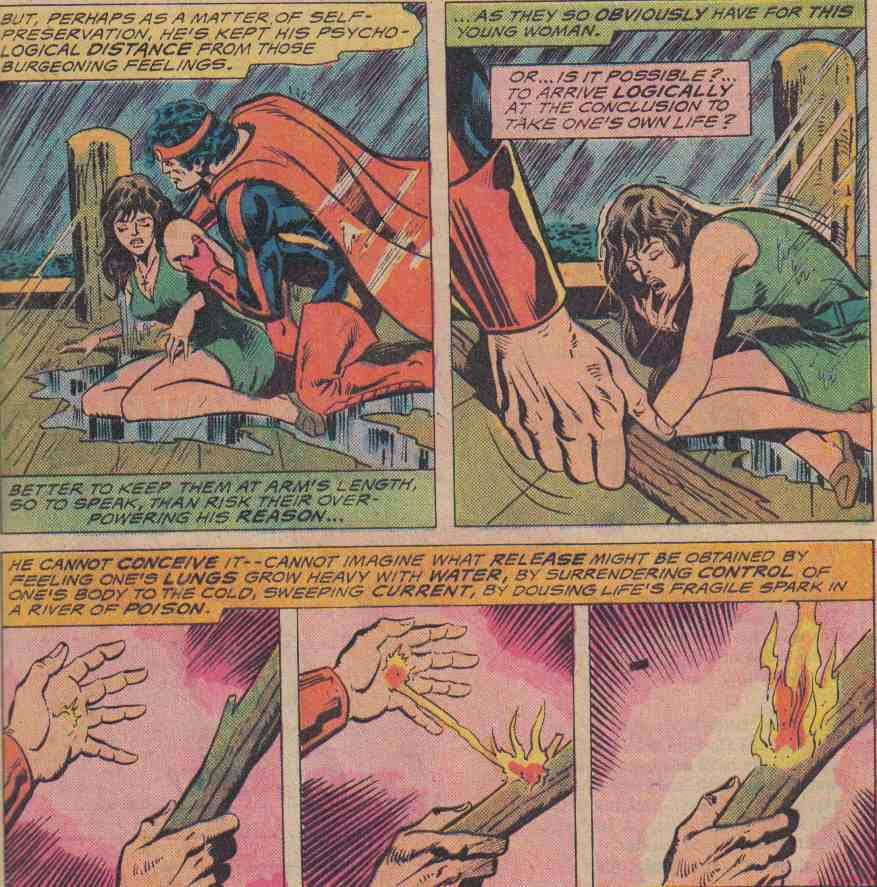 Like why do his thought bubbles fill up more page space than the character art for a majority of the magazine? Yet Omega himself rarely speaks. 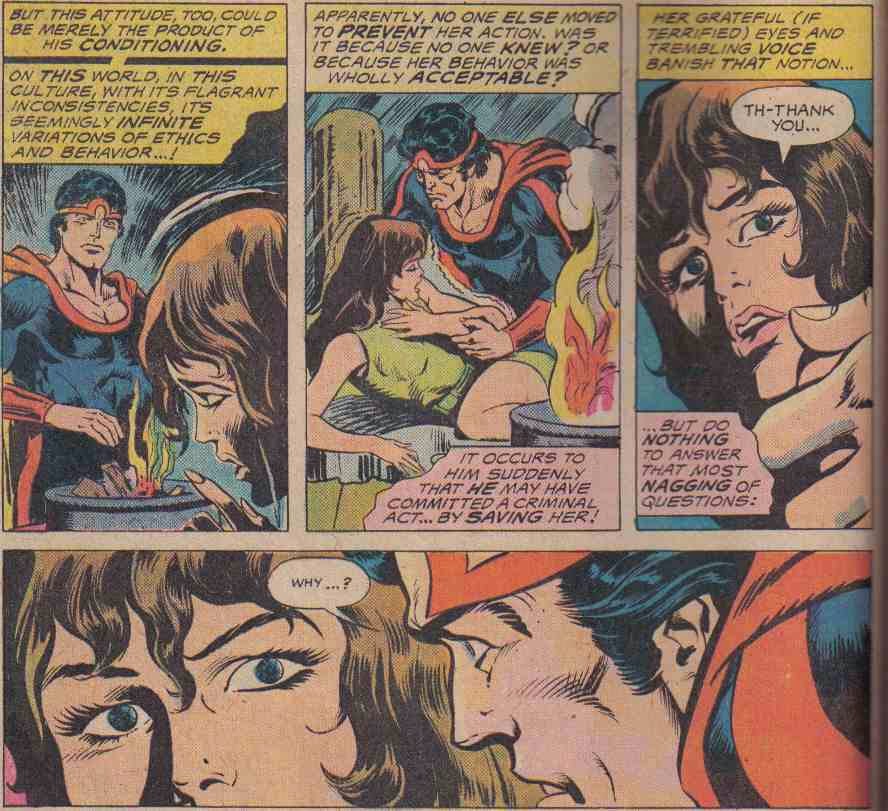 And most intriguing of all: How is a man with the strength enough to stop a speeding car (note the three tons comment)… 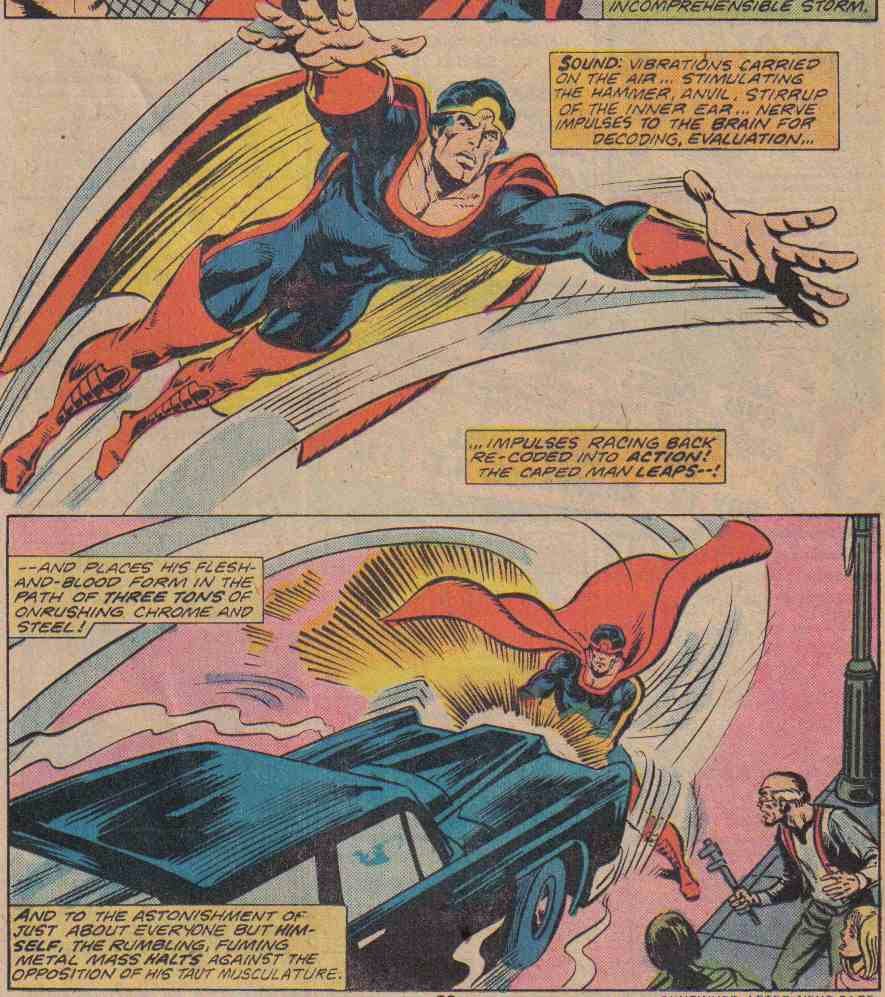 …taken down by a large pack of alley cats? Can I assume there were four tons of cats in these pictures? 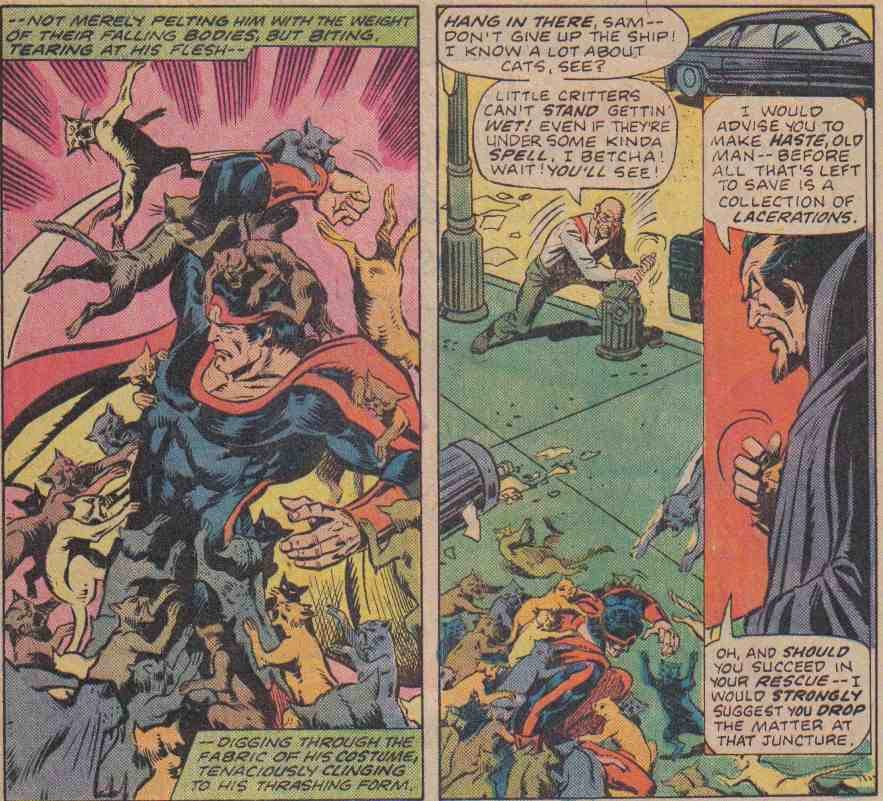 To be fair, Omega is meant to leave the reader with more questions than answers. Marvel made everything about him sketchy, including his origin. Somehow he’s linked to a twelve-year-old boy named James-Michael Starling. JM was raised in isolation by parents who turned out to be robots. As a result, JM talks like a Vulcan. That’s okay though, he’s given a cast of secondary characters that provide his daily doses of drama. He’s picked on by bullies at school, has a tomboy love interest and a glasses wearing “Friday” type as a best friend. Best of all is Amber, one of the two twenty-somethings he lives with (their relationship to him is never explained). 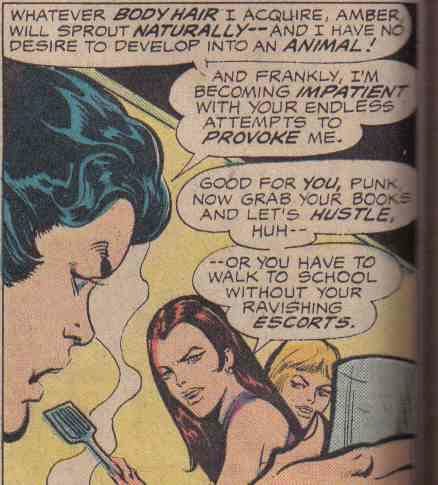 Note that pet name she has for him: The Punk. Where’s Marvel’s version of CPS?

There is so much time spent on JM, that you'd assume the title was actually his. In fact it was. Omega was a bit character put in and "linked" to JM in a mysterious way so that Gerber and Skrenes could write a gritty story of the life of an school age boy. The superhero stuff is pretty much rote action pieces that act as filler between JM's life struggles.

This particular issue is pretty lame.  JM attends school where some bullies hassle him and mess up a science experiment. JM’s friend is caught by the same bullies later for a little shadow boxing, with him playing the shadow.

Omega saves someone who jumps off a bridge. He takes the potential suicide to stay with this old man who talks a mile-a-minute. The old man explains that the neighborhood burjo, or witch doctor, wants to take her as his wife. Omega tries to stop the burjo, who calls himself El Gato, from abducting the woman. El Gato sics a bunch of cats on Omega and escapes with her.

This series is really pretty third-rate, both art and story-wise. The title was cancelled after issue 10, which means it didn't last a year. Gerber and Skrenes never got around to explaining the link between JM and Omega, the whole dead robot parent deal or why Omega’s mute through most of the issues. Omega ended up killed off in issue 10 and other writers tied up the loose ends of JM's life in the pages of The Defenders.

The dialogue is overkill and the thought balloons (especially Omega’s) tend to grate. They are supposed to be adding atmosphere and mystery, but end up being clichéd and repetitive. However Omega has a cult following among comics fans and one of their number, novelist Jonathan Lethem revived the character in 2007 for a 10 issue limited series. Lethem's take even garnered a nomination for an Eisner for Best Limited Series.

Posted by SonOfCthulhu at 6:58 AM