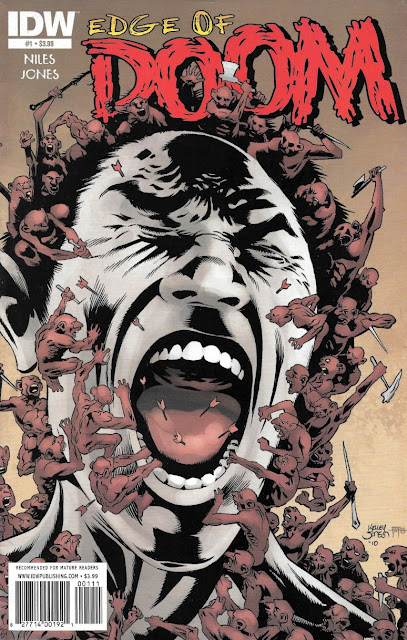 Near the edge but nothing pushes you over


Steve Niles is most notable for writing the comic 30 Days of Night, a modest seller that launched a movie and turned into a franchise. It was originally conceived by Niles as a movie, but no one bit, so he turned it into a comic. Then the movie offer rolled in because of the book.


I know of Niles because of 18 issues of perfection from DC called Simon Dark that he wrote in 2006. Simon Dark was one of the few books that I fell in love with, an emo Frankenstein's monster as superhero tale that was unique enough to feel fresh in the age of stale stories. It was cancelled because life basically sucks.


Kelly Jones I know from Sandman and Batman, although he is one of these guys that has been everywhere. He has a list of credits for Marvel, Dark Horse and DC comics. You won't find a much better artist for horror either. Just take another look at the cover if you think so.


Recently these two have teamed up on two titles in Niles' Cal MacDonald series, which we will get to when I finish digging Supernatural Freak Machine out of the Crapbox Stacks. Have patience with me.


As for right now we have Edge of Doom from these two fellas, a six issue, 2010 anthology series of book-length horror stories for IDW that might have been great, but starts off a bit rocky. This first issue is missing only one element, a very crucial piece that I like to call "the turn". We'll get to that in due time. Have a second helping of that patience and let's let the boys weave us a tale this evening. 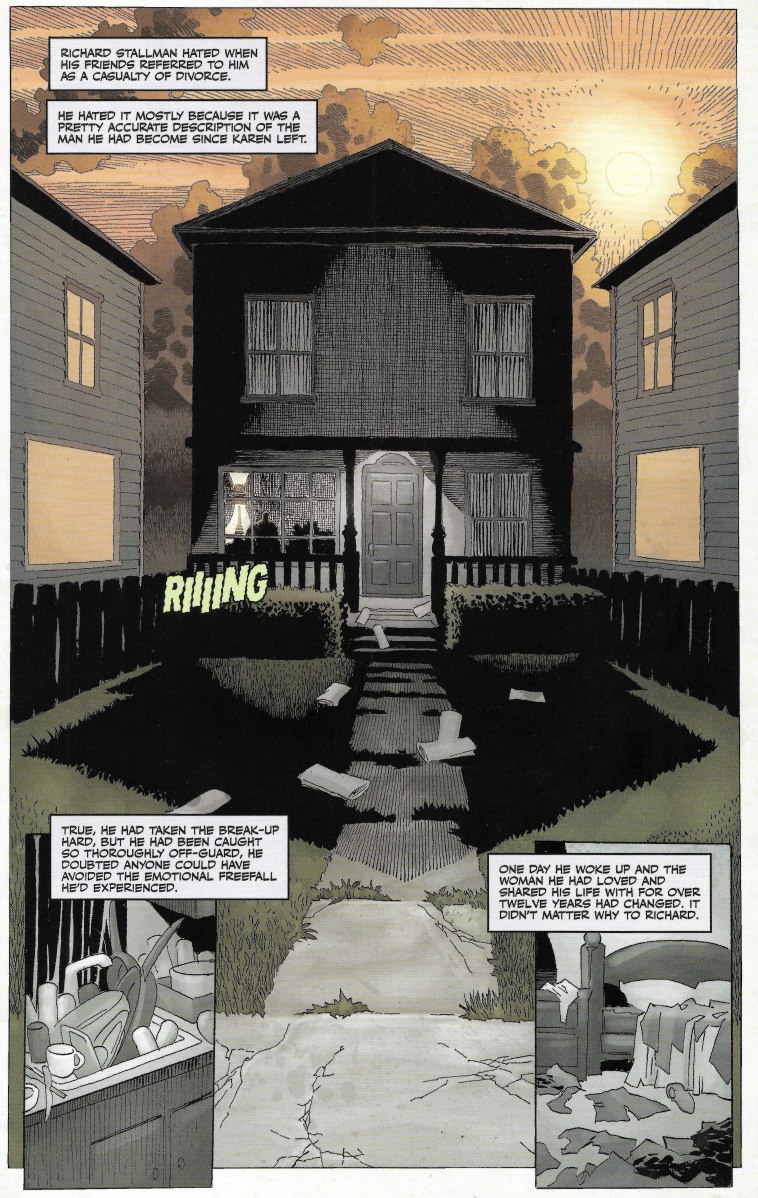 We being with Richard Stallman being in what I term "The Shit." That painful feeling after a long-term relationship has gone south where you don't want to deal. It appears, Stallman has been in The Shit a little too long by the look of his yard. He even states how his wife did all the gardening


And the inside of his house isn't much better. Stallman's been on the drink with no chance of coming back, or so it seems. He's given up on life. So much so that he no longer goes into work. So much so that he loads his hand gun and considers doing himself in. And then he doesn't. Unfortunately for him and the neighbors, he makes a midnight decision that isn't so wise. 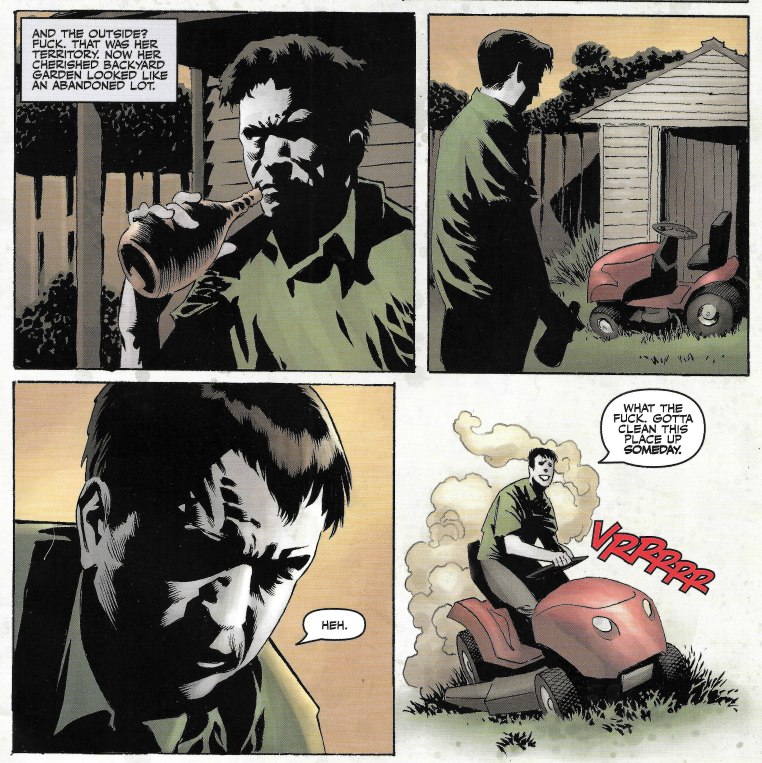 He's going to be popular. No sooner do I think that, than someone comes out to stop him. 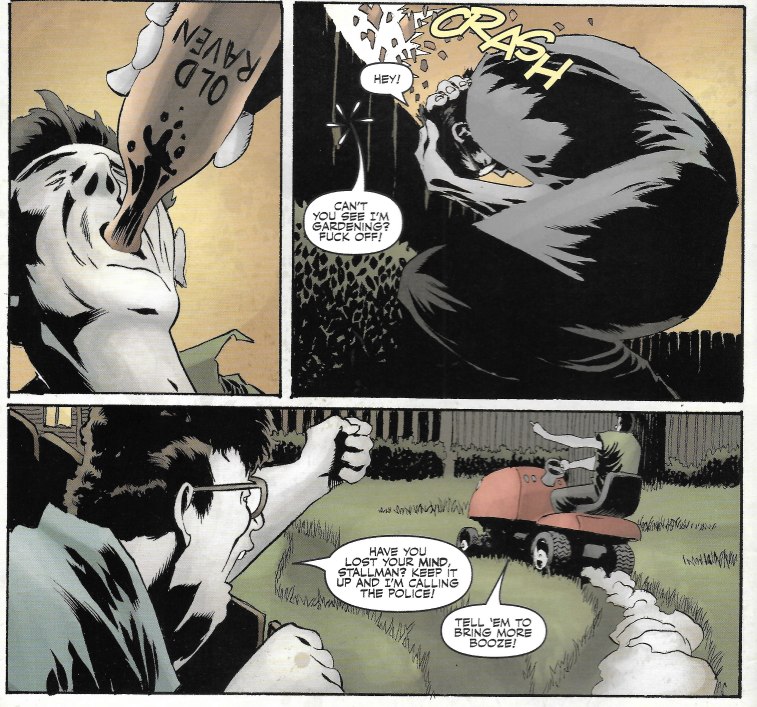 Looks like he'll be mowing until sunrise. Or at least he would have been if his meandering path on the riding mower didn't cause this to happen. 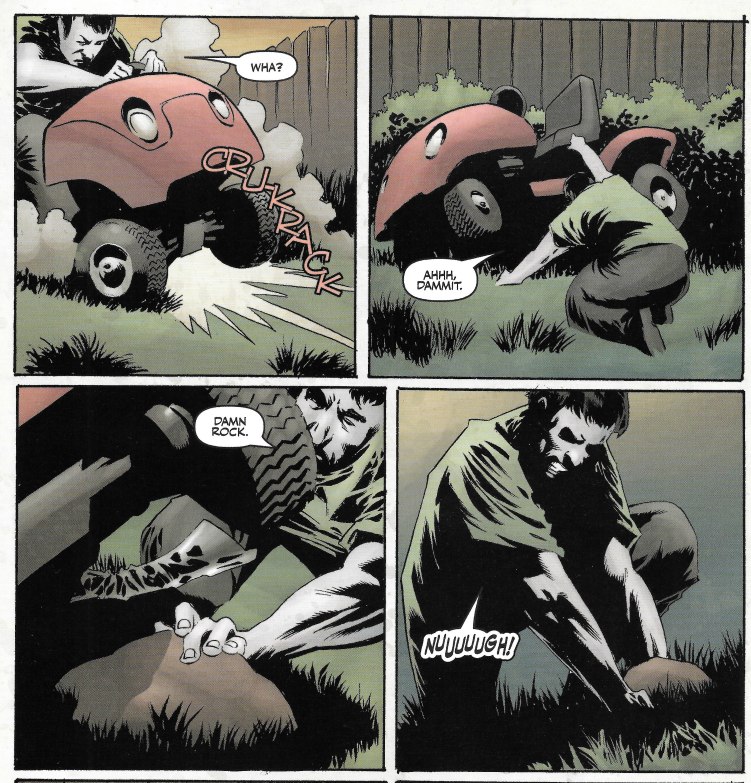 He's so drunk he nearly drops the rock on his head getting it out of the ground…and what do you think he finds beneath it?


If you said hole, bingo! You win a cupie doll.


And a small wooden coffin, apparently. So while Stallman runs inside to check out tiny dead people, his neighbor makes the life-changing mistake of finding out what all the ruckus was about. He really should have just let sleeping dogs lie…or in this case: drunken men mow. 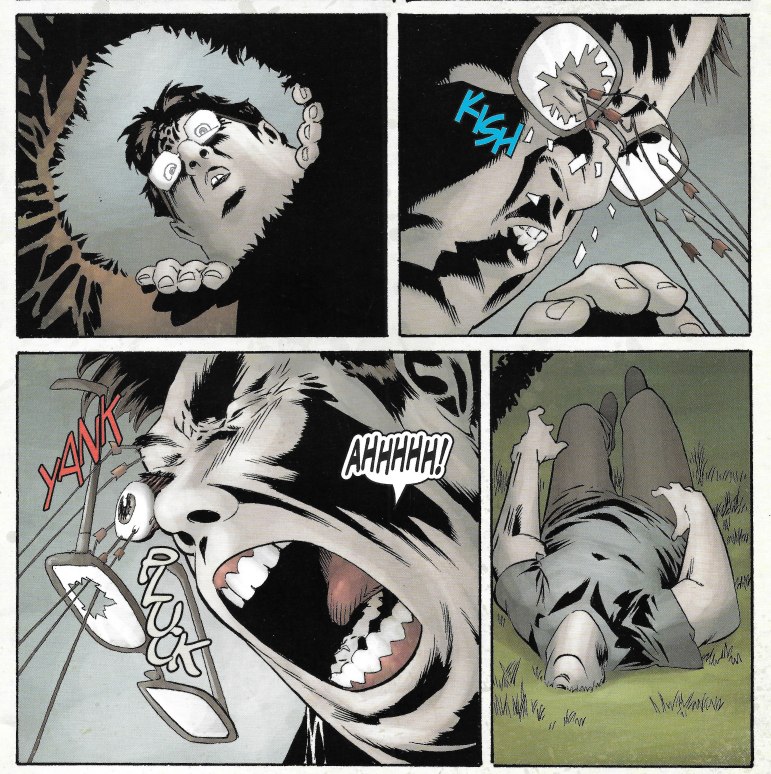 And Stallman doesn't hear this commotion due the fact that he's got problems of his own. Problems that don't end with wondering what would happen if he went to the news with his find. 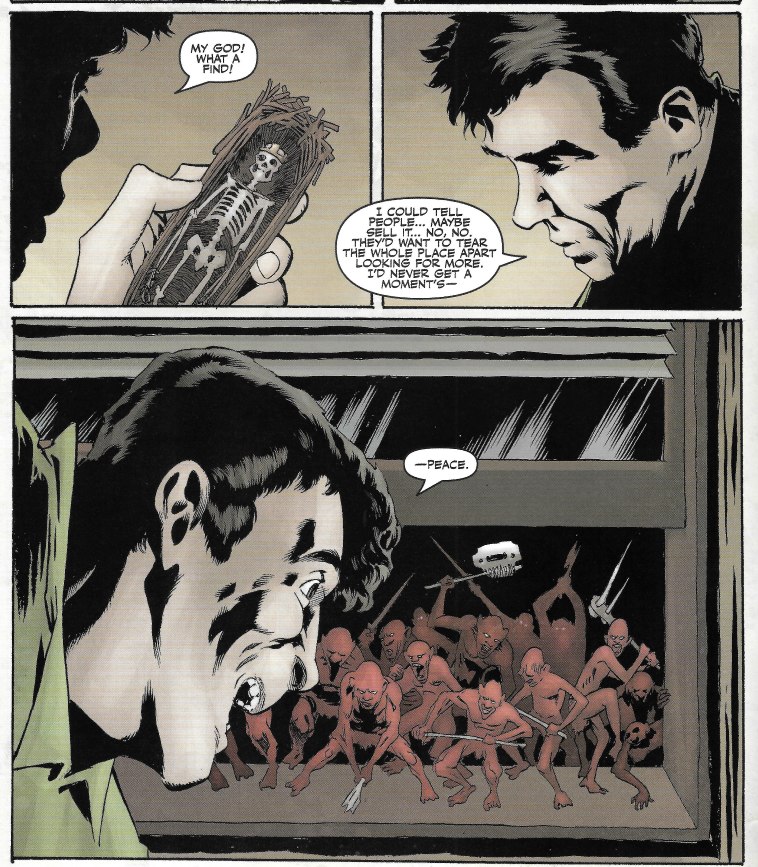 That can't be good.


Even in his drunken depressed state, Stallman still knows not to mess with three inch tall primitives and gives them back their coffin. And after a terse hissing from the leader, it looks like Stallman is off the hook.


And then they slice his Achilles tendon bring him down with arrows and ropes, then truss him up like a turkey at thanksgiving and head him down the hole. 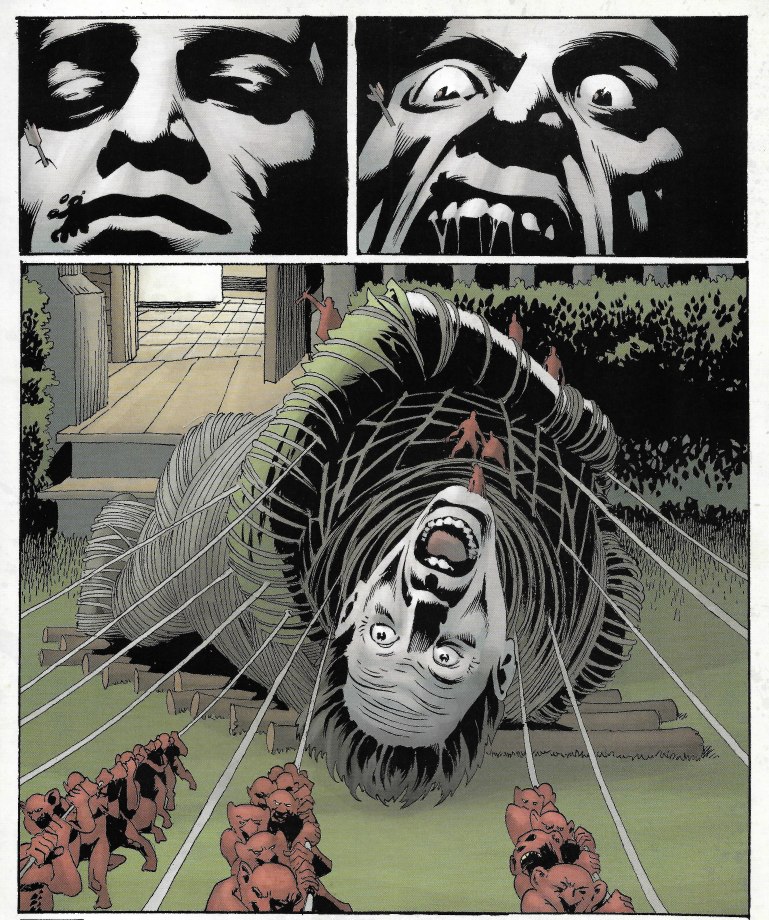 Jones is really fabulous. I love both the blocking and the art here. He set up those first two panels so well. The art in this brings actual chills and I'm even cutting out some of the other scenes that bring even more shivers to the fore. 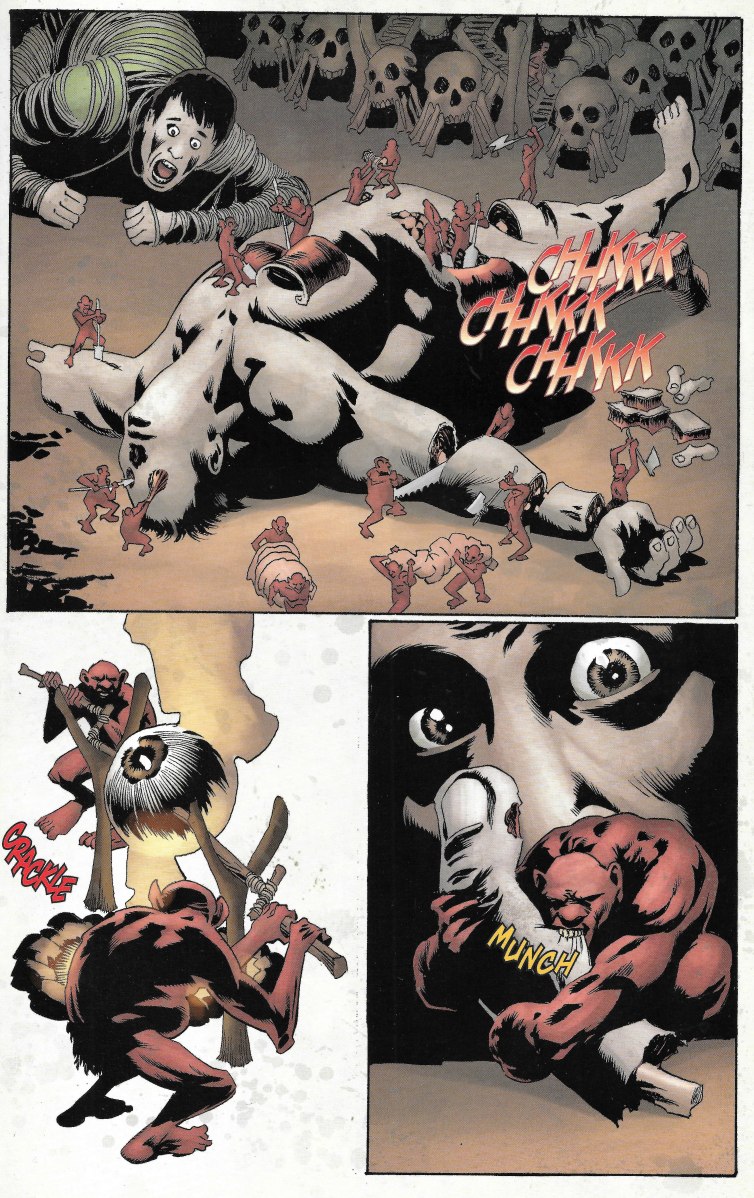 Woah, that is some mind-bending gross-out stuff there. It looks like his neighbor is just the appetizer too. Someone else is slated for the main course. Someone like Stallman himself. 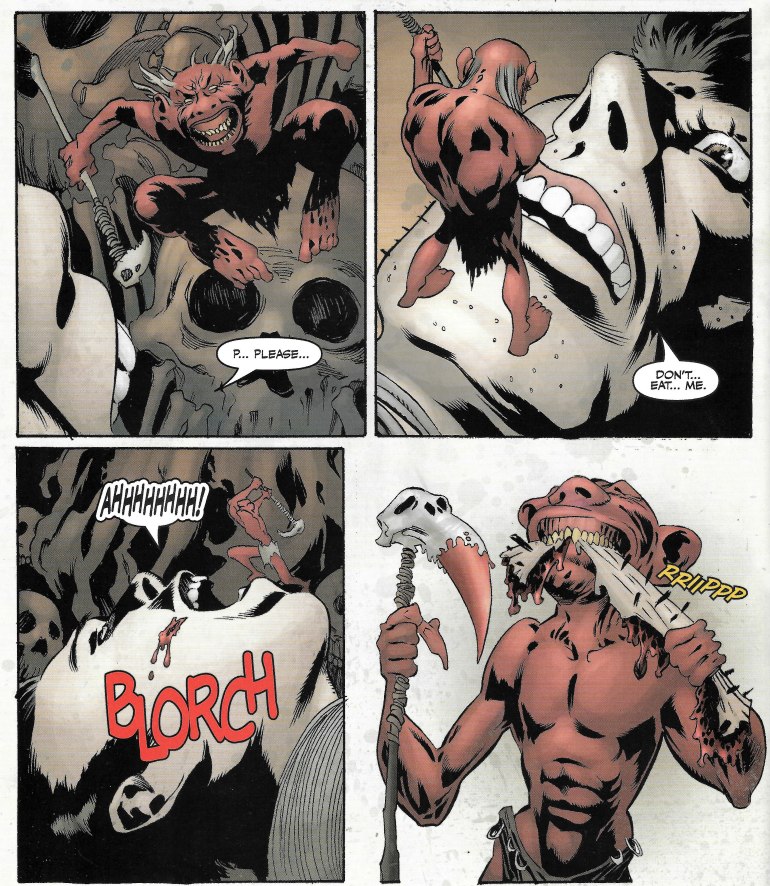 And I think they've decided he's come into season. It's then that he remembers grabbing the gun as he fell. He fires and it breaks him free of the ropes. It also gets him some much needed revenge. 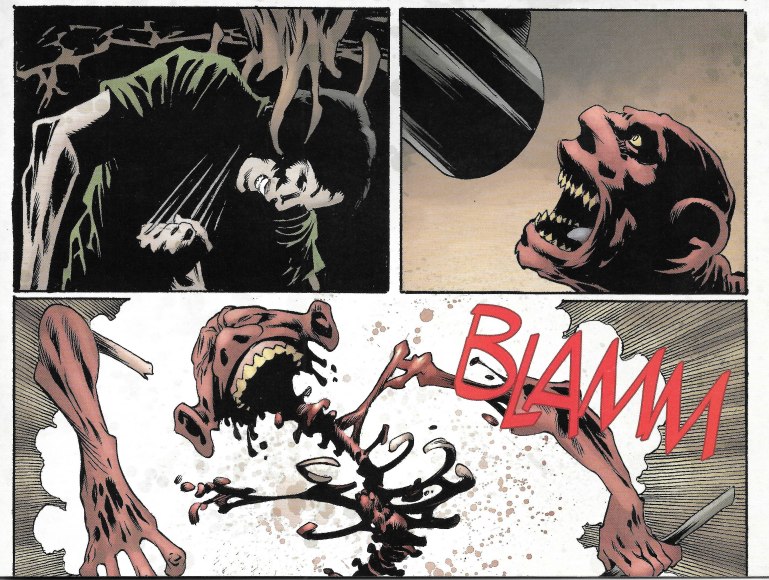 Can't say enough good things about the art and the colors used. Those credits should go to Jay Fotos, and his work on bringing the pencils to life with color usage staggers. Even in hard to look at scenes like this one. 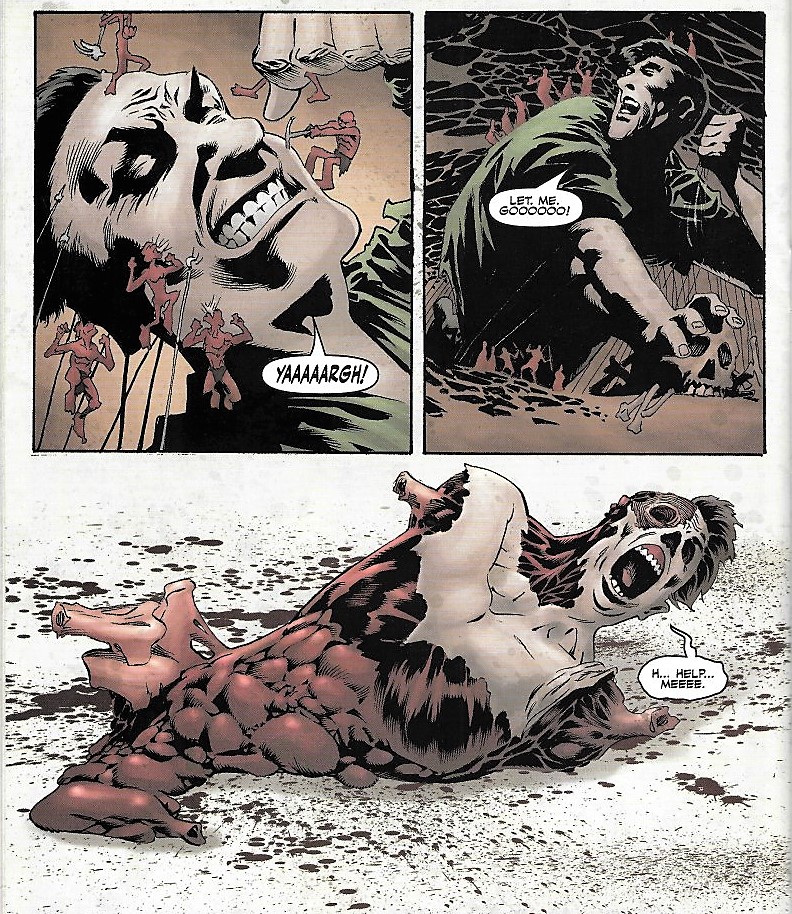 That's some Grade A nightmare fuel there. Woo-boy.


Stallman shoots him in the head on the way out, which is a mercy killing. Then drags himself out of the hole and uses his mower to dump gasoline back down and presto! No more household vermin problems. 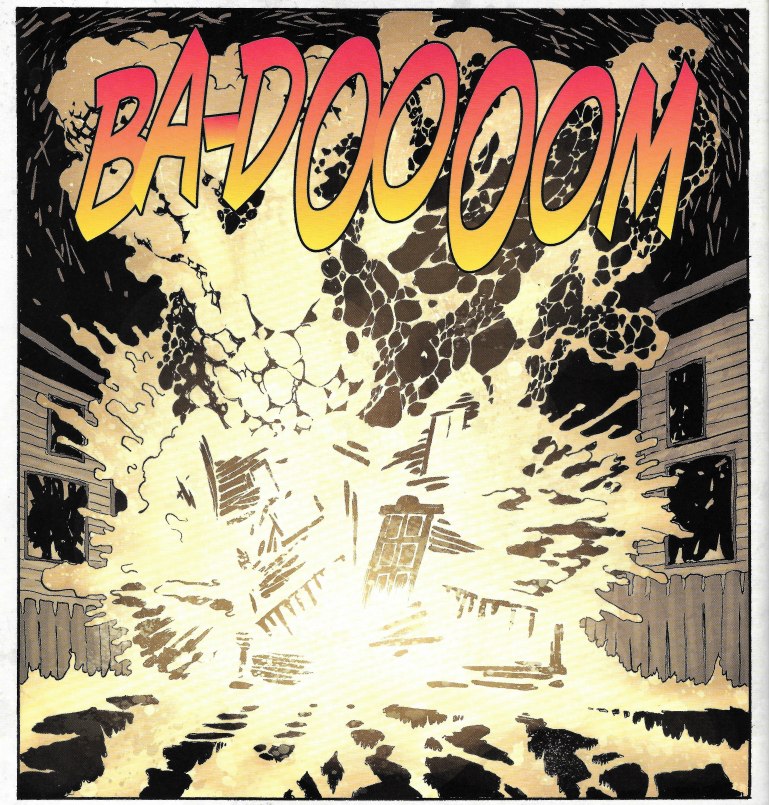 Heck, no more household either. Stallman gets caught in some of the blast and a tiny bit crispy fried. Not as bad as our tribe of tiny natives, however. 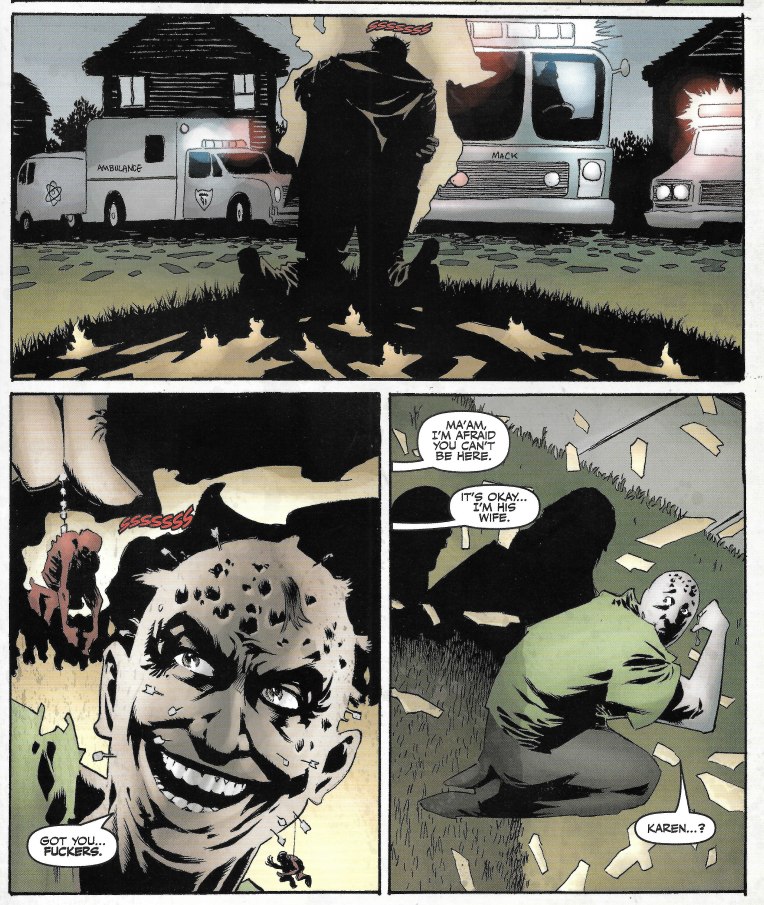 And it is at this point I realize I'm waiting for something. Something dramatic to punch this up somehow. An ending to wrap this together. And Niles lets me down a little. He just has the wife reappear with little real reason for coming back. All so that he can use it for this lame joke line. 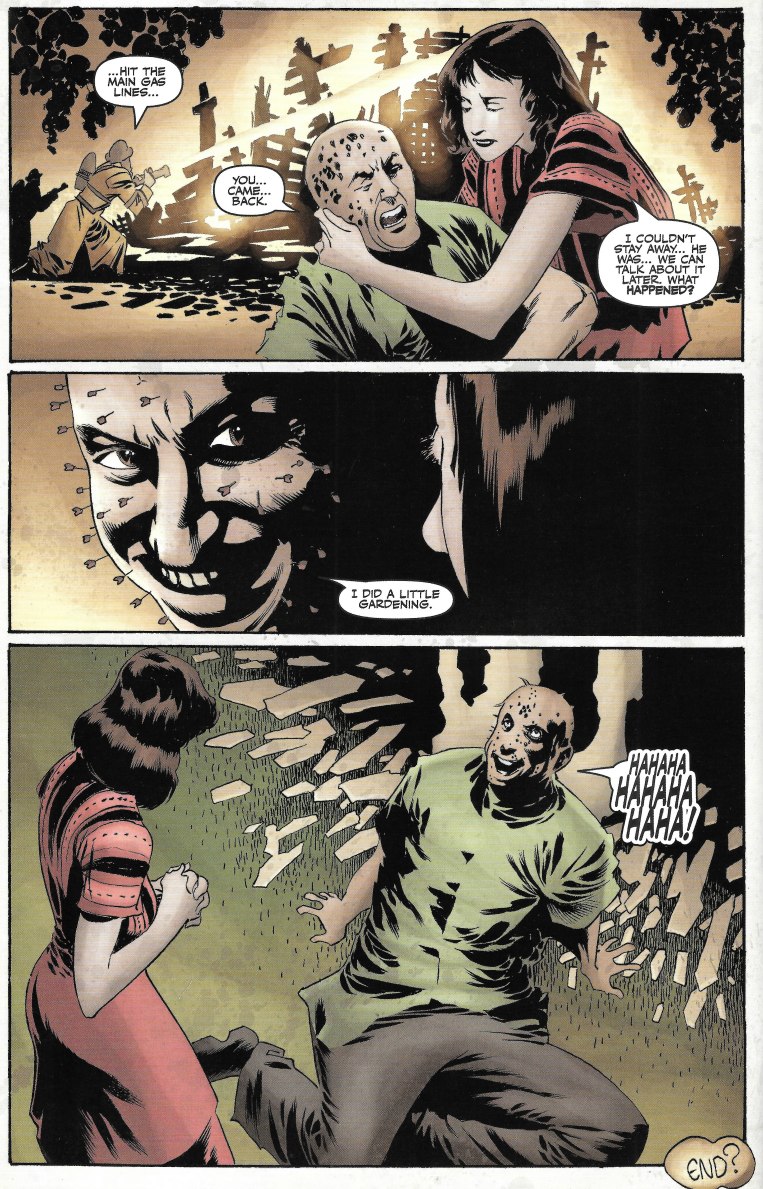 Now I'm not saying the issue doesn't have the necessary chills or freakouts to not merit inclusion on a "good" list. I'm just saying the ending is kind of a letdown. There needed to be some kind of gut punch if you were going to bring back the wife. This joke is both expected and cheesy. As such, it doesn't do it for me. And perhaps doesn't even do it for Niles. Note the little "potato" at the bottom saying "End?" like even the author was penciling this in with hopes of coming up with something better before the book headed to press.


I've written my fair share of horror fiction (unpublished) and there is a point at the ending of all good stories I like to call "the turn." It usually occurs after the climax of the story or right alongside it. The turn is fundamentally a part of our enjoyment of horror story. It is the unexpected last scare that stays with us long after the story has faded. If you want an example of the turn, think of the ending of the first Friday the 13th movie. Jason jumping out of the lake at the end is really just a post-climax jump scare, yet it is the thing that we take home out of the theater.


It is the idea that unsettles us, the thing that makes us feel uncomfortable, like the story hasn't truly ended. Something is left unresolved. Things truly aren't over. The ending to this first issue of Edge of Doom doesn't satisfy on that level. It just stops at the punchline to a bad joke.


On the strength of that ending, I would give this a weak recommend. The art alone is spectacular and there were six of these, so perhaps the other stories had stronger finishes. I think that if you see 'em, snag 'em!
Posted by SonOfCthulhu at 5:09 PM