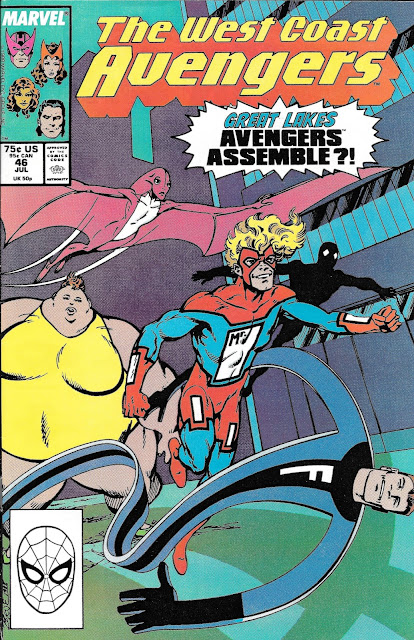 Make way for the GLA!

I have a love-hate relationship with the West Coast Avengers.

It was the first book I bought when I got back into "serious" collecting after high school. I decided I didn't have time to read real books due to my college coursework. And I always loved comics as a kid, but first never had money for them and then didn't have the ability to buck the social order that at the time made being seen in public with a comic "uncool."

You have to understand that they weren't generating movies with box office draws in the triple-digits beyond "million" back then. They were just "funny books."

Iron man was on the cover of WCA #1's unlimited series opener and I had to have it. Didn't matter to me that it was "uncool." I was about to be drowning in a sea of textbooks the size of a small minivan. I NEEDED something to read. Something lite and quick and soft on the eyes.

Plus I was over the whole cool-uncool thing.

There is MY love for WCA.

And the hate for WCA? WCA's first two years has some of the WORST writing of any Avengers…no, scratch that….of any MARVEL title of that day or any other. It is the dialogue. Unnatural and overly angsty, not to mention stilted and filled with exposition dumps in large awkward doses every single issue.

I kept buying it way too long. Far into my second year collecting and only then did I drop it due to price increases squeezing my buying dollar.

But in 1989, the book and I caught a break: John Byrne came back to Marvel.

A growing rift between Byrne and DC after his revamp of Superman reached a point where both parties decided to part ways. Byrne came back to Marvel and took over minor titles in what looked like shame to us fans. The guy after glorious runs on X-Men and Fantastic Four and he came back to do Star Brand (more on this another day), West Coast Avengers, She-Hulk (which I loved) and finally Namor. He pulled a writing stint on Iron Man too.

I hated him on Star Brand, loved him on She-Hulk, and was ambivalent to his Namor. His West Coast Avengers stuff however, was way more controversial.

The team was really a bunch of second stringers by this point. Hawkeye and Mockingbird just made an exit. Vision and the Scarlet Witch were still around, but neither had ever carried a series alone. USAgent, the crazy roided out dick that took Captain America's place for a few weeks, had just joined. Wonder Man had stayed on, but Simon Williams exuded the generic strongman vibe in such a way that no one was ever excited. Tigra was still there, too… but beyond that I don't know who the team comprised.

Bryne wanted the title so he could thoroughly f-up the Vision. He got his wish, although for those of us Vision fans we really wished he hadn't.

What everyone (at least I think everyone) did love however was Byrne's introduction of the Great Lakes Avengers. I'm not going to spoil any of this, but let the book do its own talking for once. 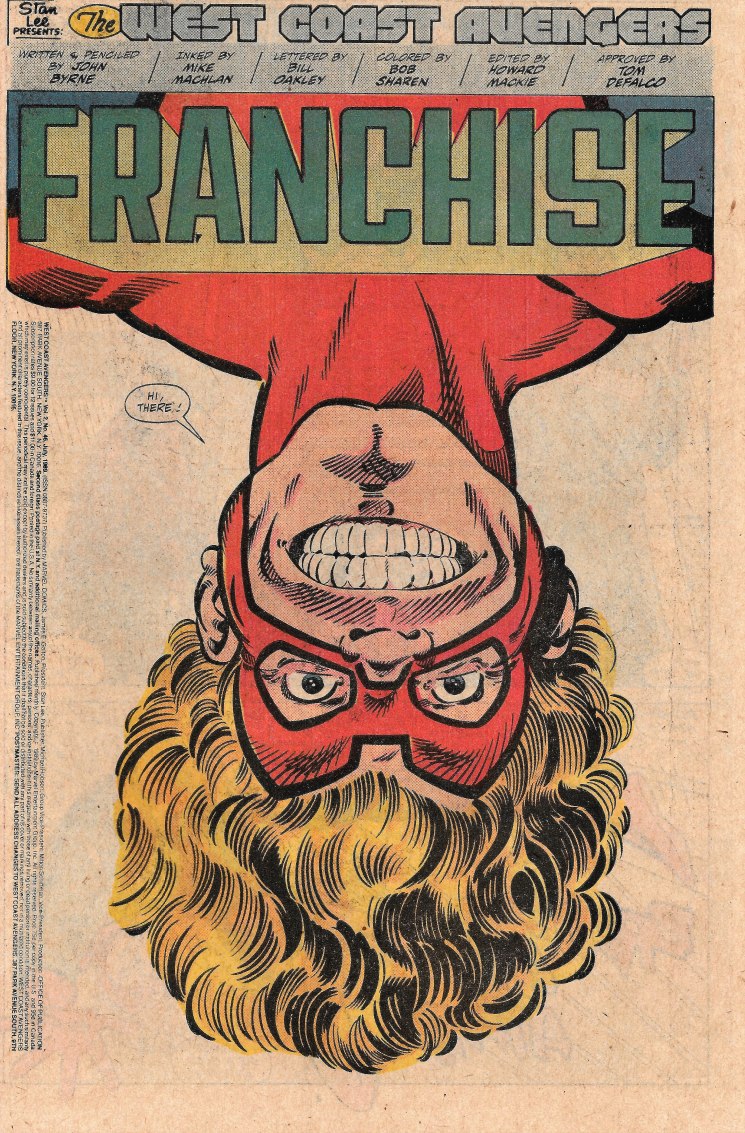 We begin with a surprise splash page which is totally Bryne at his best. Meet Mr. I. I'll tell you what that stands for in a moment. But first, check out the inking done here by Mike Machlan. I think it he does an exquisite job of showing off Bryne's pencils. Bryne has been (in)famous in the past for talking bad about people who inked him, but I could really care less what he thinks. Machlan's inks here are a delight and remain so throughout the issue. Love those hair waves!

Anyway…who is this and why should we care?

This is your superhero, folks. Or one of them at least. He's about to foil this bank robbery. Let's watch shall we? 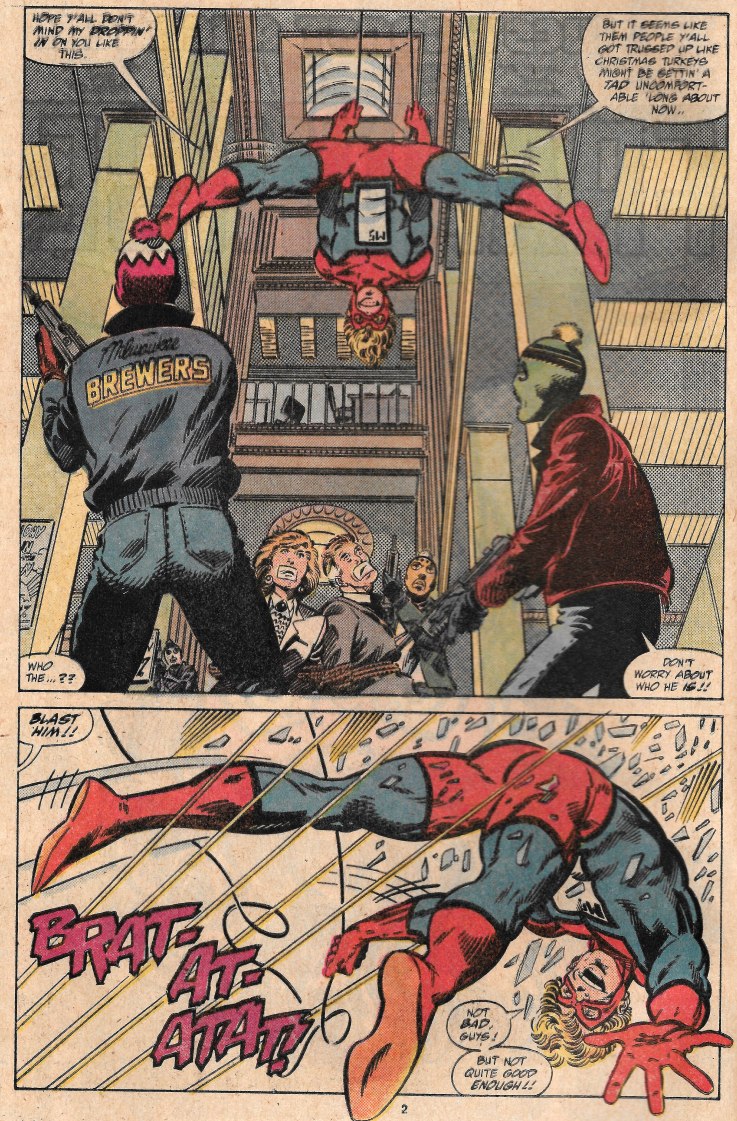 Look at these two panels. Look at them. When I saw this, the child inside me screamed with delight. THIS is what I wanted from John Byrne: panels and action that overflowed with joy. Mr. I does okay against these guys, bouncing around like a snazzier dressed "Speedball" but then… 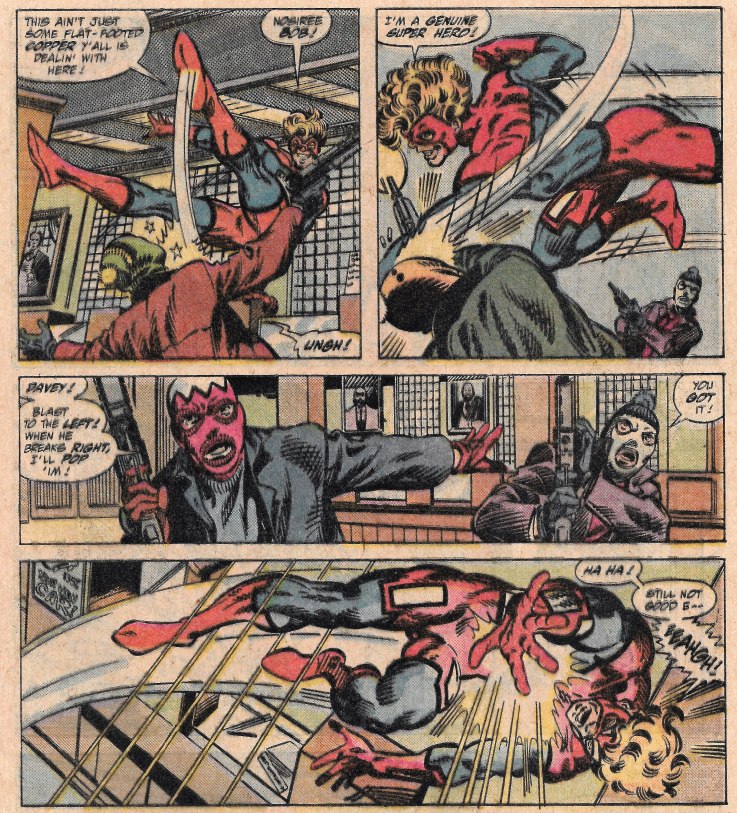 …he gets tagged and you feel like the mission to rescue these hostages all went to H-E-double hockey sticks. 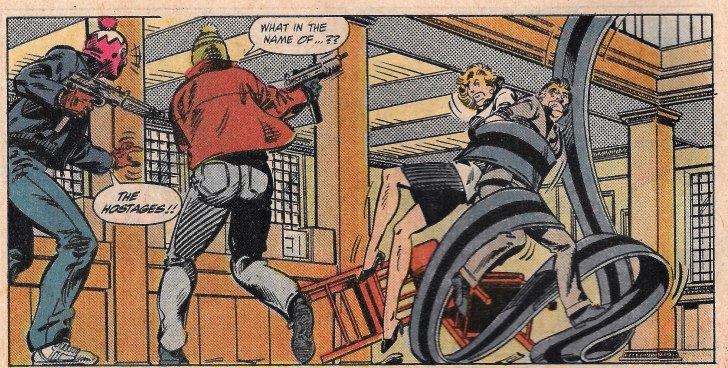 That's the point where the wall caves in and 700 lbs of woman comes striding into the room. 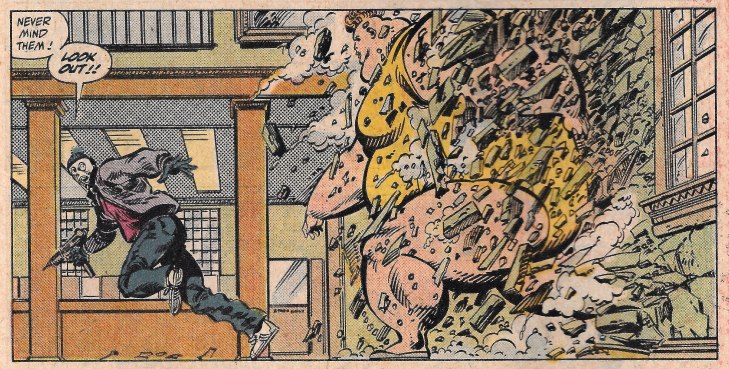 Jeebus! I guess the Blob has a sister. What next could bedevil these robbers? 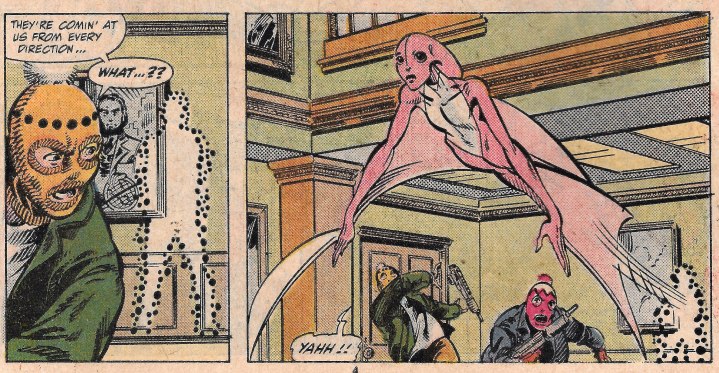 Woah! A man-shaped portable hole and a girl version of that Dinosaur guy from X-Men. What the crap is going on here?

Oh, that's right! A rescue mission. And while the throwback to a Ray Harryhausen creature feature flies rings around one of the robbers, another gets the idea to just shoot the fat chick and call it a day. I mean hey! It worked on that first guy. 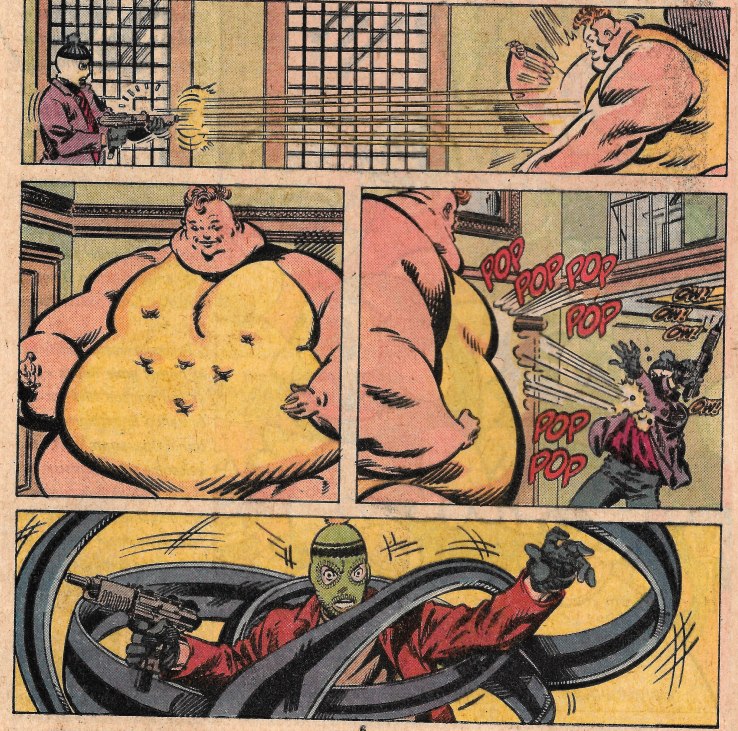 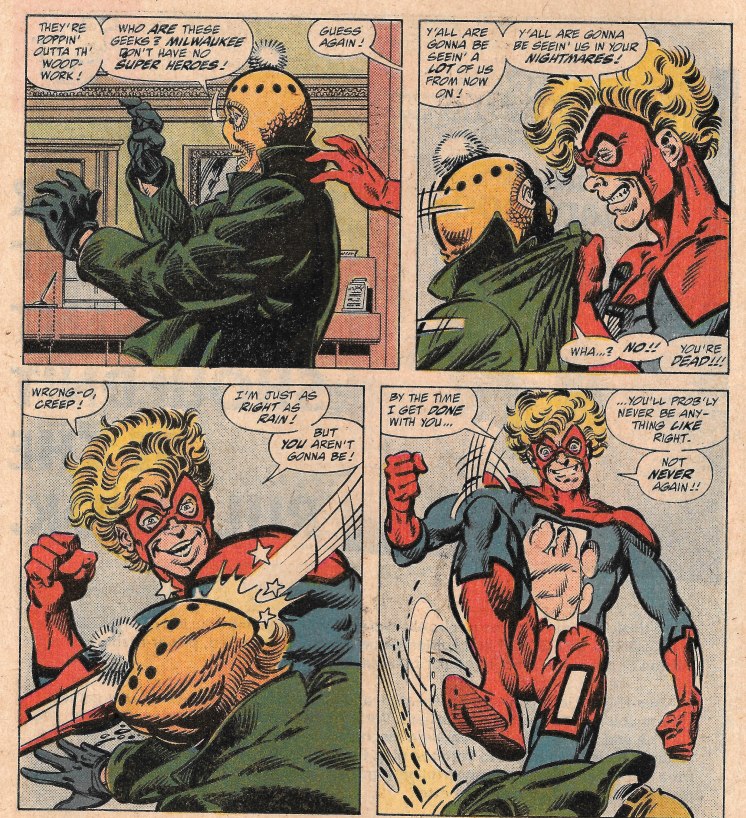 And dare I say it? That Mr. I guy came back a bit …off his rocker, if you know what I mean. Good guys don't usually curb stomp bad guys that are down and out. It gets so bad that discount Mr. Fantastic has to restrain him and the Pterosaur chick puts some kind of whammy on him using her voice. 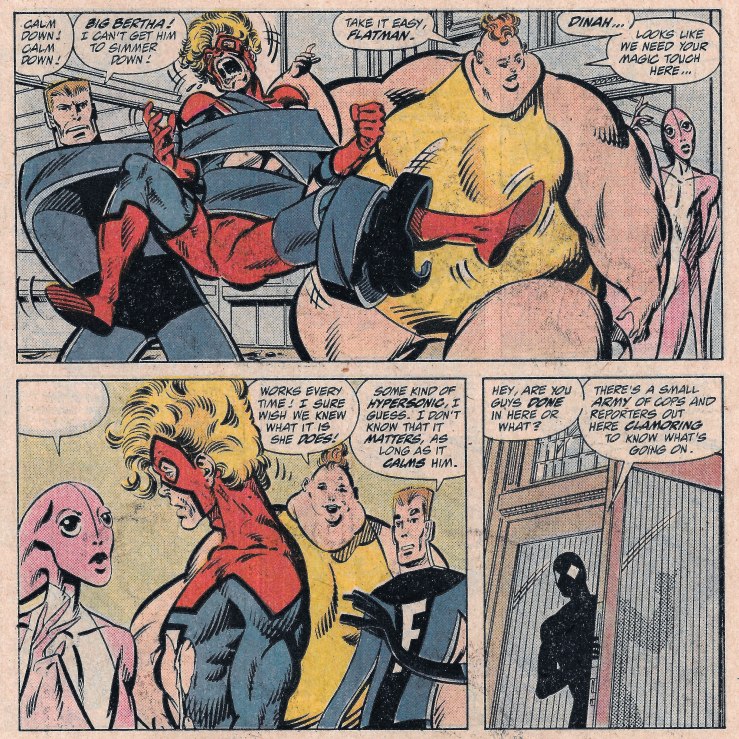 While "Diana" does that, we get a few more code names. The Blob's sister is called Big Bertha and the stretchy guy is Flatman. Mr. I is their leader, when he isn't recovering from being shot to death or out of his skull crazy. As to who these guys think they are? Why not let them tell the press here? 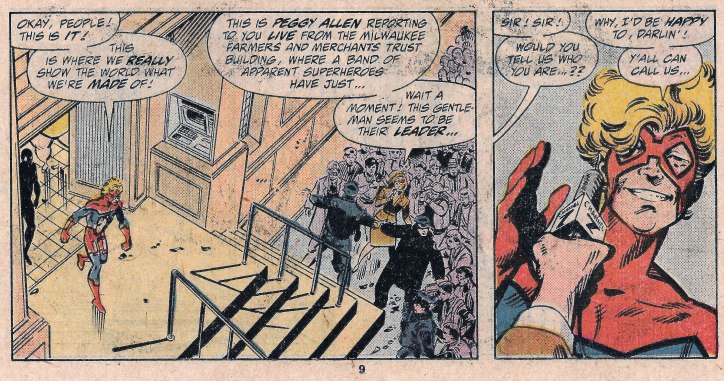 The announcement is of particular import to the resident of this dingy motel room. That being one Clint "Hawkeye" Barton, currently estranged from his wife Mockingbird and on one of his many hiatus's from the Avengers. He was team leader of the West Coast branch last time I checked in, so him being out is a surprise to me.

Possibly as much of a surprise as the GLA is to him. Clint knows these guys aren't legit Avengers, since he recently was privy to all the group's top secrets. He wonders what, if anything, he should do about them.

Just then a knock sounds on the door. 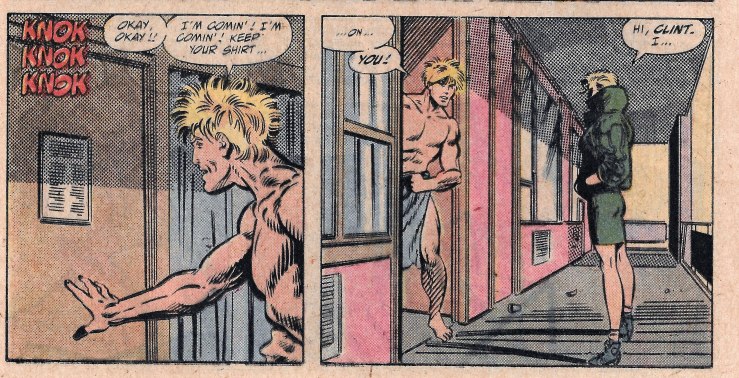 And there stands Bobbi "Mockingbird" Morse, his wife.

A huge argument ensues that fills in the gaps on what has been going on between them. Bobbi kicked Clint off the team for his rash actions. Clint is still nursing the hurt of losing a team he helped found. Bobbi is still nursing wounds from when the Phantom Rider drugged and used her, wounds made all the worse by Clint's reaction not being very supportive of her. In short they are considering divorce. It's a bit like when your parents are arguing and you uncomfortably trapped in the room with them.

While they fight, we turn back to the West Coast Avenger's compound proper, where USAgent is having breakfast. 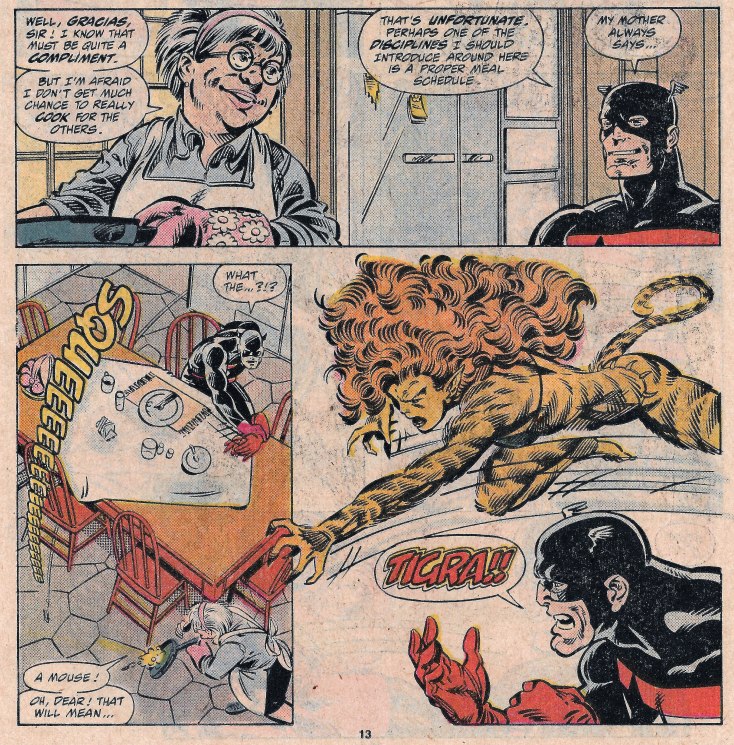 Byrne worked extra hard on "normalizing" USAgent. The character had been a raging psychopath when he wore Captain America's mantle, and was sorely in need of repackaging. I was never sure I bought him as a good guy. Just too much water under that bridge for me. I mean, he killed people in cold blood and stuff.

Tigra interrupts and this is another shift that Byrne introduced: Make Tigra have control problems with her "wild side." It is an okay story concept as far as it goes, even though I generally tend to be disappointed with storylines that try to give everyone a glaring dysfunction to move the plot along. What I'm saying is that I'll allow it, specifically because Byrne's pencils make any plotline go down easier, even ones we think are kinda silly.

I mean look at this: 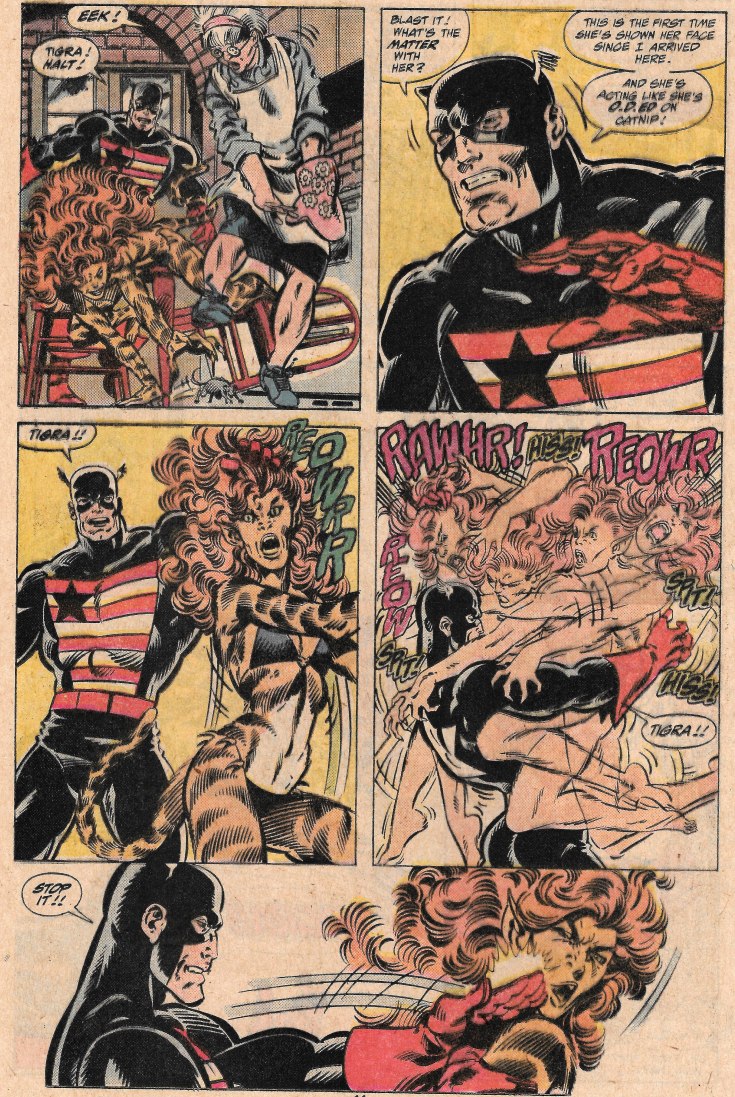 USAgent vows to do something about her out of control urges.

Meanwhile, Bobbi and Clint have decided to put aside their differences and investigate the GLA. I’m just going to give you some great Byrne shots here. This book is filled with them. 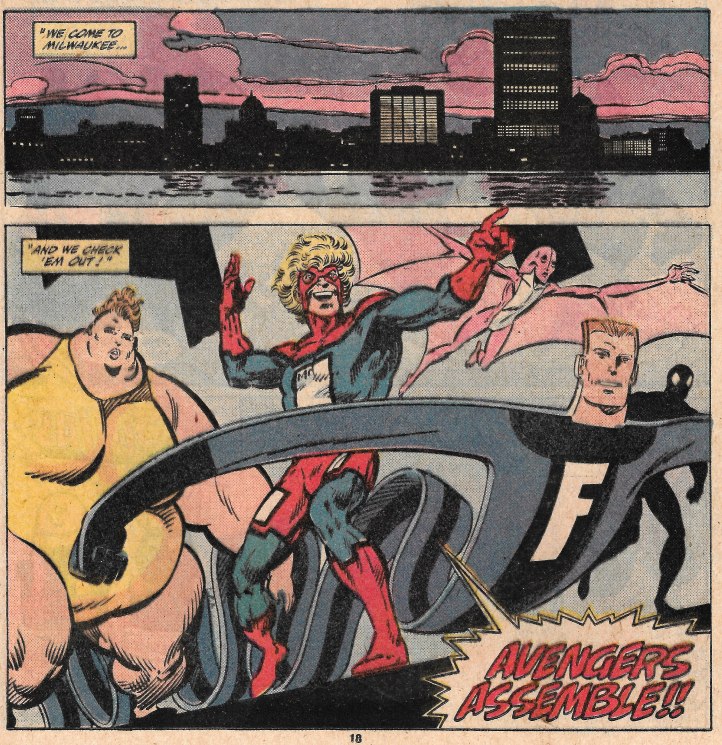 And it is here that we finally get a look at the team's powers, as they use them to infiltrate a building that Clint and Bobbi have setup as a trap. First our Pterosaur chick is called, get this, Diana Soar. Ugh! 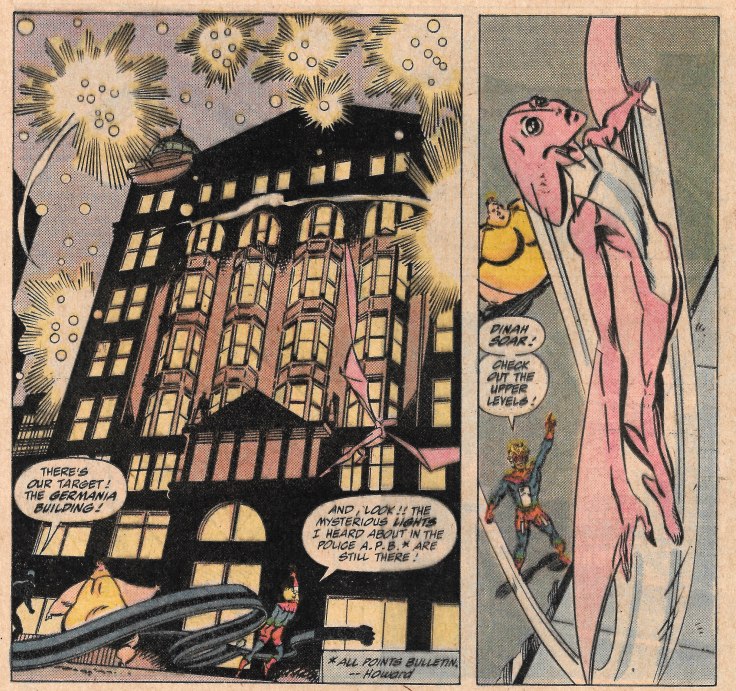 Our shimmery friend here is called Doorman, and his power appears to be linked to opening temporary holes in things with his body. 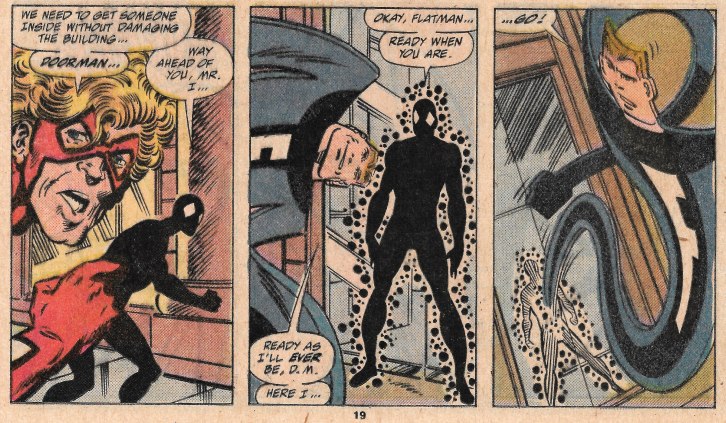 When Clint trusses up Diana Soar, Mr I and Big Bertha move to investigate. They scale the building in quite a unique way. 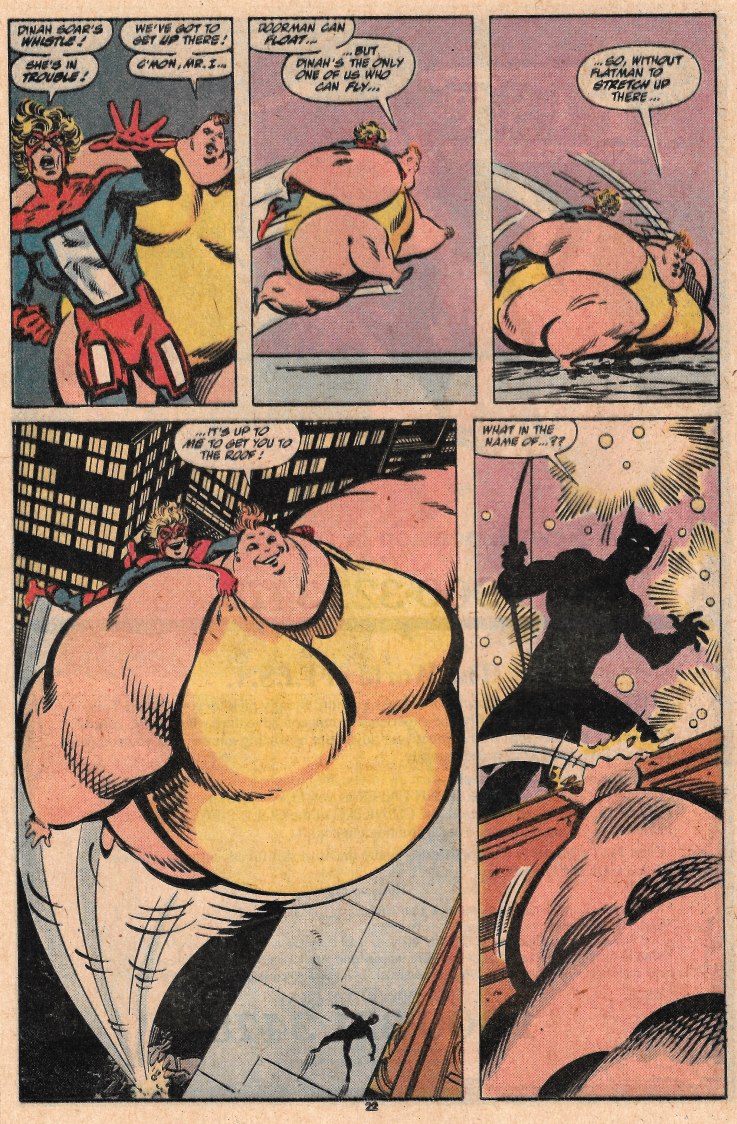 Big Bertha can't pull herself up or keep that perch for long. Before she plummets back to Earth, Mr. I hops off to deal with Clint. And I do mean "hops".

Love the way Byrne silhouettes Clint all in white here.

What ensues is a few short panels of fisticuffs that Byrne uses to play up the fact that Mr. I isn't buying these heroes are who they say they are as well as get in some great dialogue. He really can craft a story. 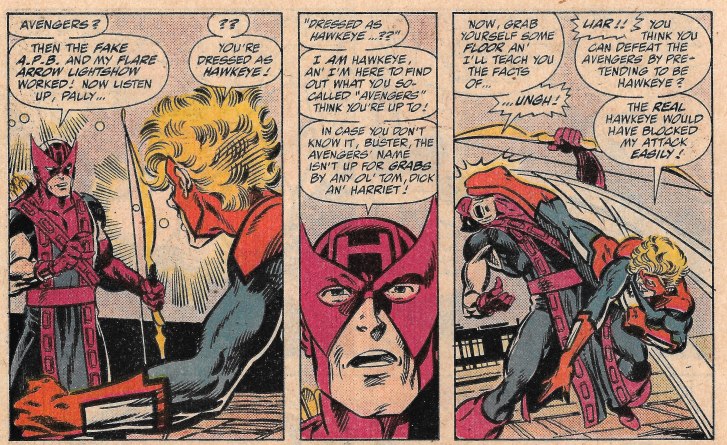 And he really knows how to work a joke. 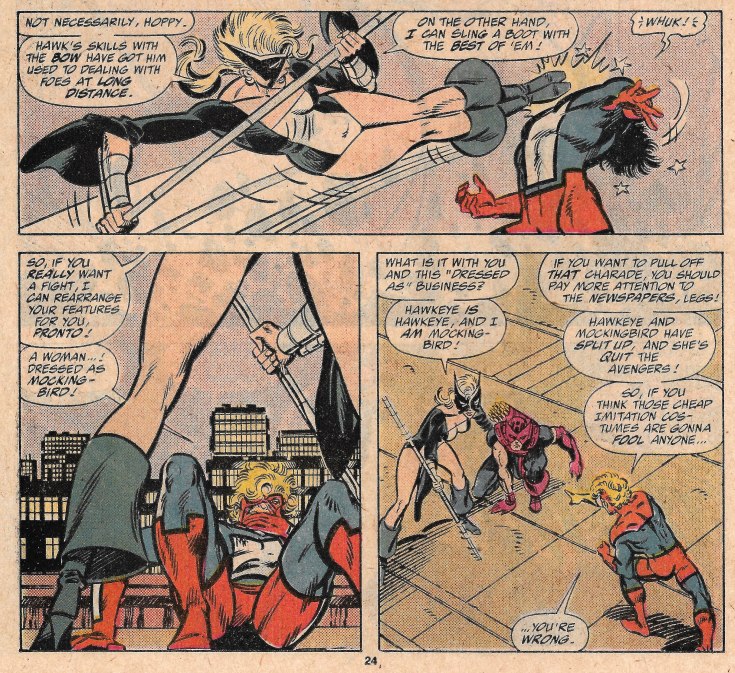 Finally Mr. I has had enough and he takes a header off the rooftop. Mockingbird follows him down because it appears he's fallen to this death. 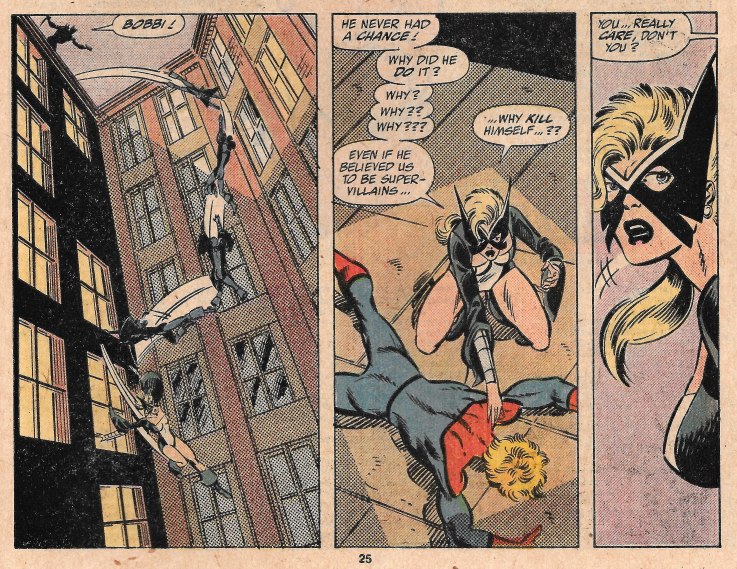 Once it is apparent that these are the REAL Mock and Hawk, Flatman stops the battle to converse with them. He also gives them the skinny on Mister Immortal, who has a healing factor on Wolverine level. 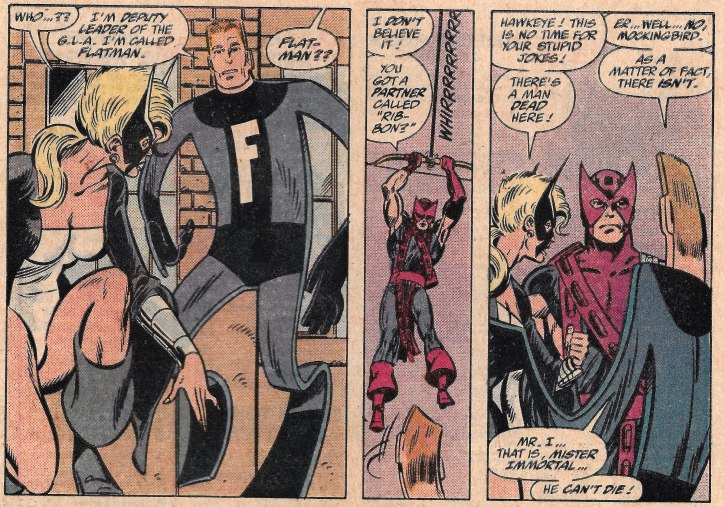 Love the "do you have a partner" joke. Byrne was hitting on all cylinders when he did this issue. The right amount of action, drama, and humor to make it a joy to read. Out of his entire run on WCA, this is perhaps my favorite. Sadly it became a stand-alone issue, as Byrne didn't return to these characters in this run.

Anyway, they shuffle off to Big Bertha's crib which doubles as the team's headquarters. 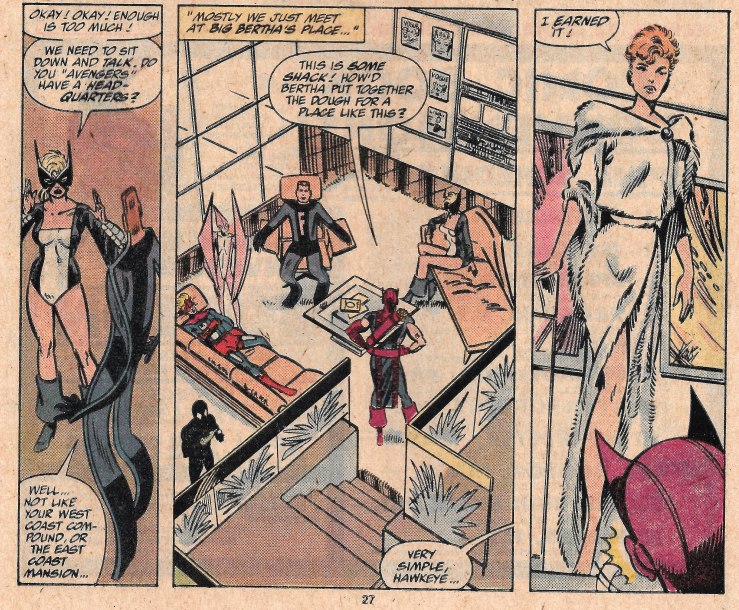 Turns out Big Bertha is a slim model who can mutate her body into a more chubby state that has Blob-like density and strength. It's a neat twist.

As is the glint in Clint's eye. 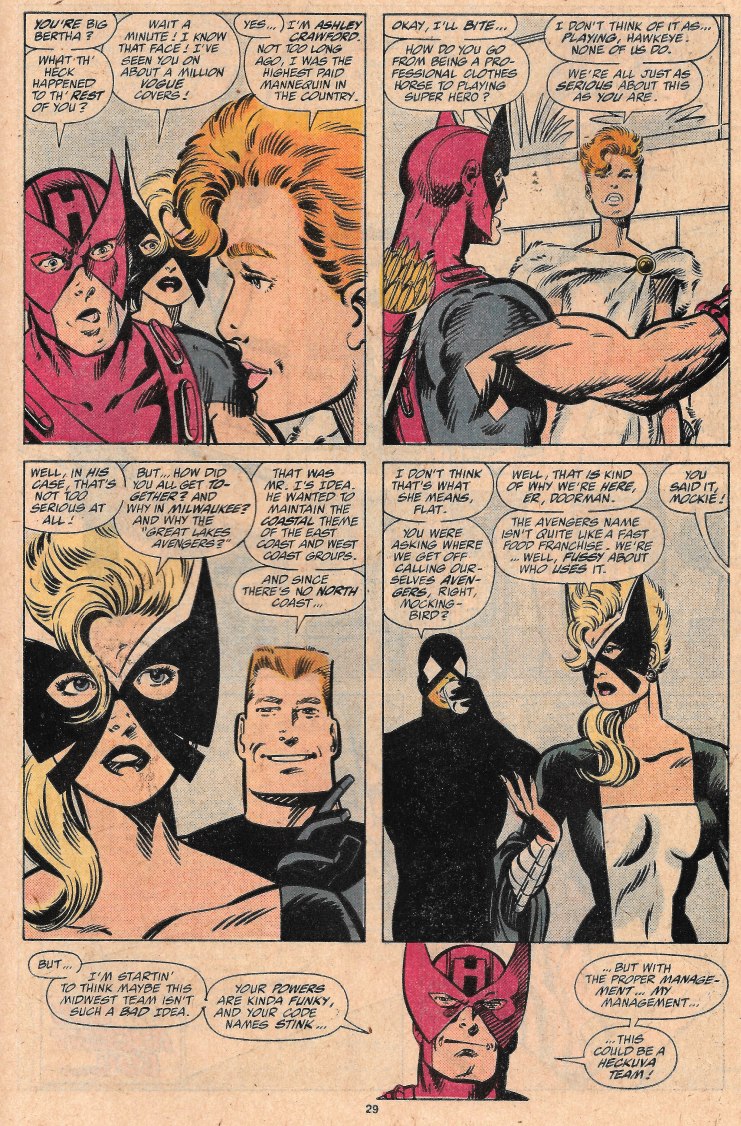 This was Byrne's way of exiting Mock and Hawk from center-stage and giving the other characters a chance to shine for a bit. They got a few cameos in later issues, but it was mostly sideline stuff. It was a good exit for Clint and Bobbi although at the time if they had a GLA limited series I believe it would have sold well. At least it would have sold well with Byrne at the helm. He really seemed to have fun creating these guys.

After popping up in issues of Thunderbolts and Deadpool, GLA DID go on to have a limited series, however that series looks to have been more jokey and less serious than they are presented here. It was written by Dan Slott and although I've seen issues in the discount bin, none of them have ambled my way. Likely I would not be impressed, as I didn't think of the characters as "silly" but as actually heroic.
Posted by SonOfCthulhu at 2:18 AM