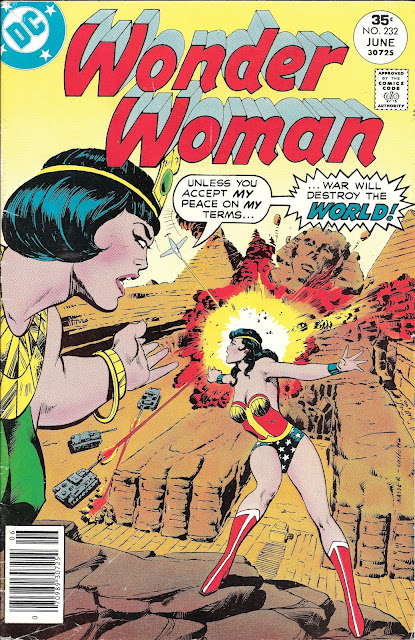 This is my first brush with Wonder Woman in comic book form. I purchased this off the magazine rack at the tender age of 10 or so, during the height of her popular TV show. The book also introduced me to the Justice Society, as they factored into the story too. This was a two-parter and back then I had that prior issue as well. Sadly, it's gone missing over the years as I loved this storyline very much.

I'll cover bits of Wonder Woman history as I go along, or at least what I know of it. The character was created by a psychologist and writer by the name of William Moulton Marston and originally draw by artist Harry G. Peter. William was an avowed feminist, who lived in an extended relationship with his wife Elizabeth Holloway Marston and their lover Olive Byrne. Both women are credited with influencing Wonder Woman's character, however her physical appearance was supposedly influenced by Olive.

I can only use a few stills to conjure up what William's run on Wonder Woman must have been like. However I believed it must have owed a bit to his theories on women's strength deriving from their ability to love and nurture, fulfillment of sexualized desires by light bondage play and a reversal of the feminine archetype as being physically weak. What I boil that all down to is Wonder Woman would get tied up frequently, but she would get herself out of those jams. I can only assume, having no issues older than the one in my hands, that she triumphed over evil in many of her tales, not by application of force alone, but by her inner strength and compassion.

And I get all of those cues from the issue you see before you.

This issue wastes NO time in getting started, with Wonder Woman in the height of World War II. She's already trapped in a pyramid of force by a female in sexy Egyptian getup. The sexy "I Dream of Genie" extra has superpowers that have stopped World War II through mind control. Meet Osira, everyone. 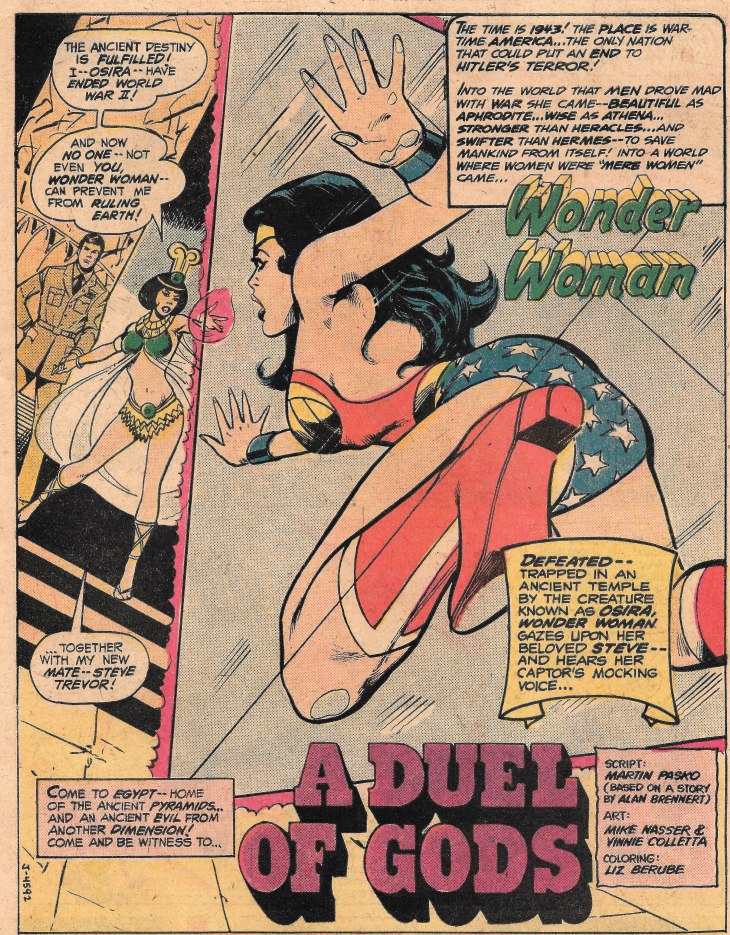 Steve Trevor also appears mind-controlled by Osira to just stand around and watch as the two tussle. Tell me this doesn't sound a bit… kinky? 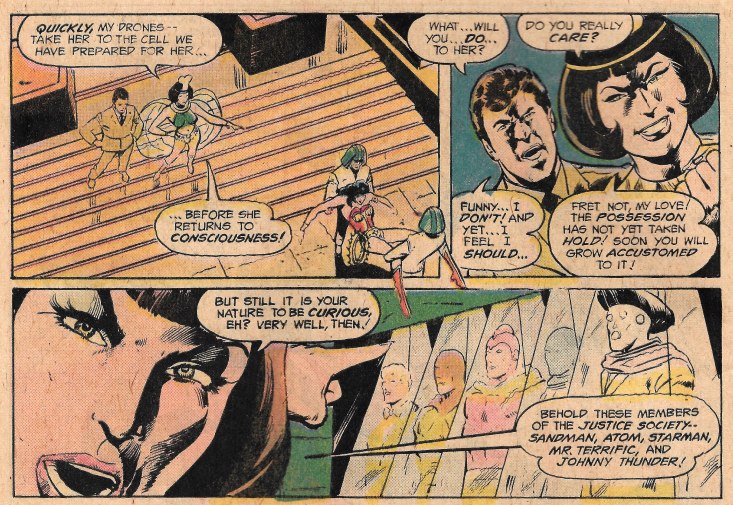 Before we can turn the page, Wonder Woman has passed out from lack of air, and her limp body is carted off by two slaves. Osira starts monologuing to mind numbed Steve, beginning with showing off that she has the Justice Society members on ice as well. 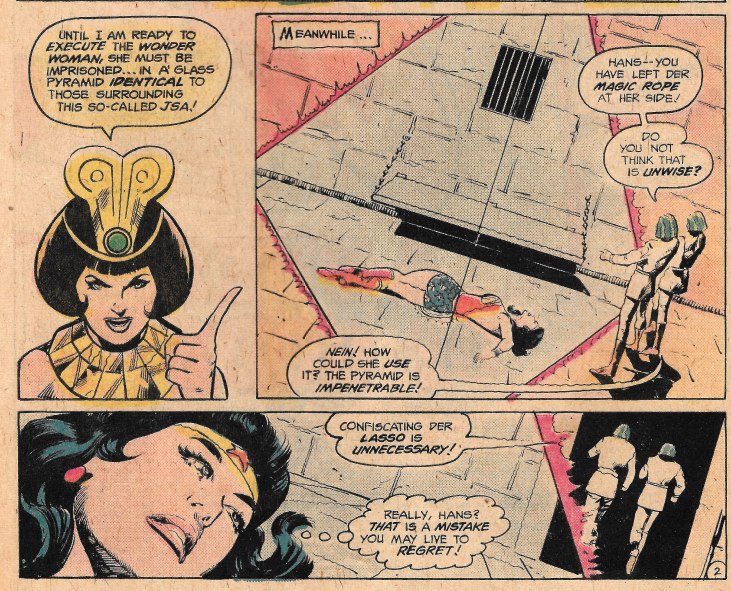 Her evil plan? Kill them all…sometime soon. Really. Her henchmen (who were German soldiers before they got mind controlled last issue) make the mistake of leaving Wonder Woman's golden lasso with her.

As soon as they are out of sight, Diana ties one end off to the jailhouse window bars. She then twists the ever-lengthening rope around her waist and makes like a top (for those under 14 in the audience, "a Beyblade") to dig a tunnel under the dirt floor. 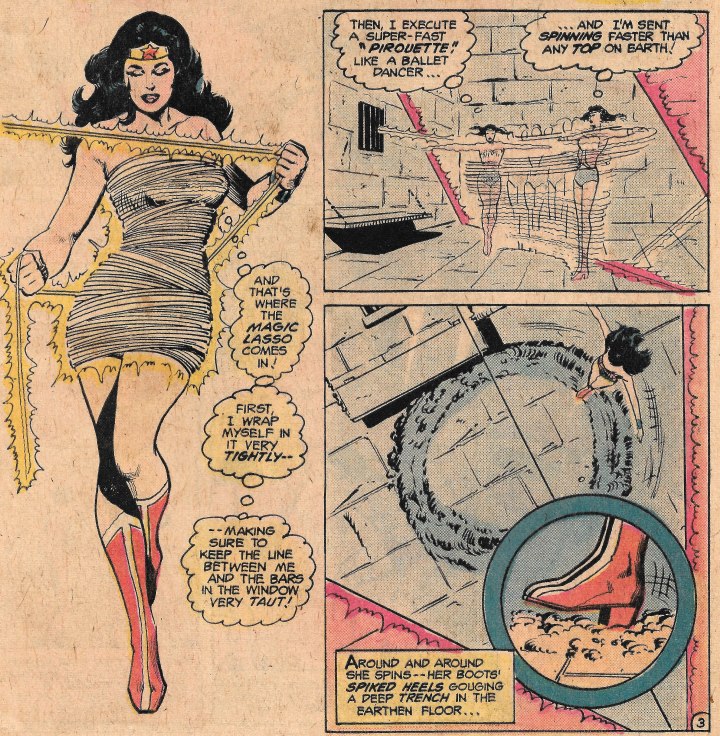 Notice how many of those elements Williams would research seem to be in play in this story so far: mind control, imprisonment, this odd kind of "self-bondage" here and WW's been knocked unconscious once already. The subtext is only weird if you think about it in terms of putting any male hero in her place with this story and doing the same things to them.

Is this a patriarchal "women in refrigerators" kind of story or is this part of Marston's enlightened feminism? I can't tell you. I can say that even 12 year old me enjoyed the story as a story, leaving commentary or titillation to the side. 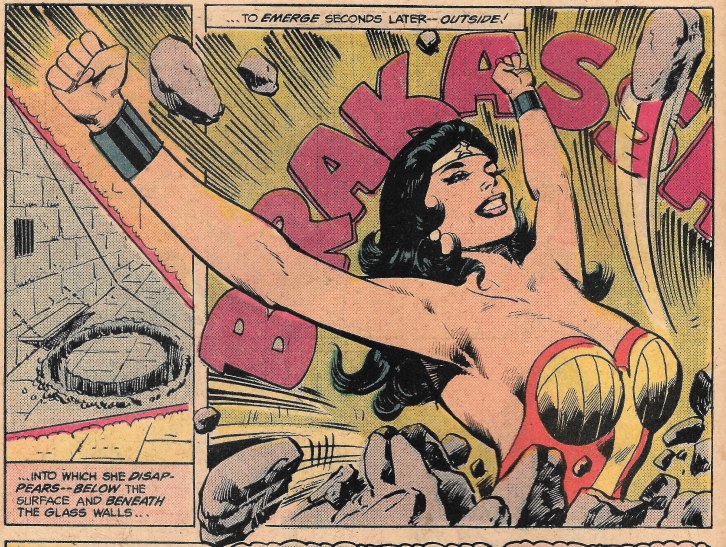 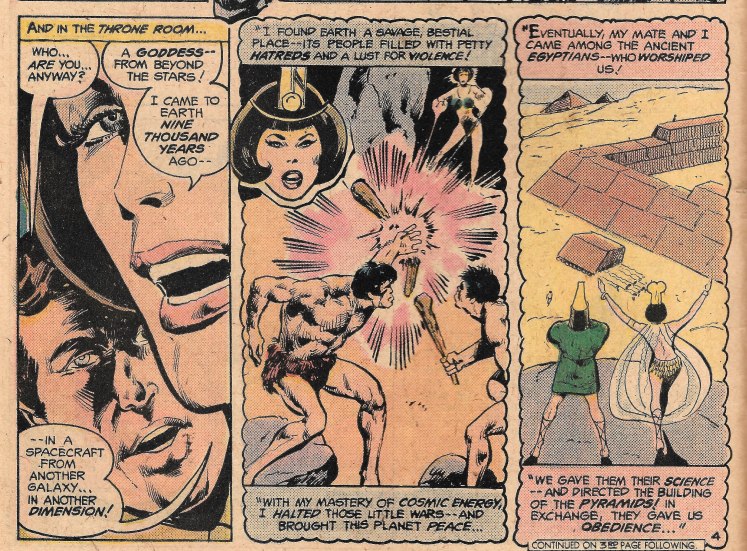 Meanwhile, Osira is recounting her origin. She originally came from the stars centuries ago, landing in ancient Egypt. That's right. She's an illegal alien.

This Anankh you speak of? Did he have a decidedly orange complexion with a "yuge" yellow comb-over? Just wondering. 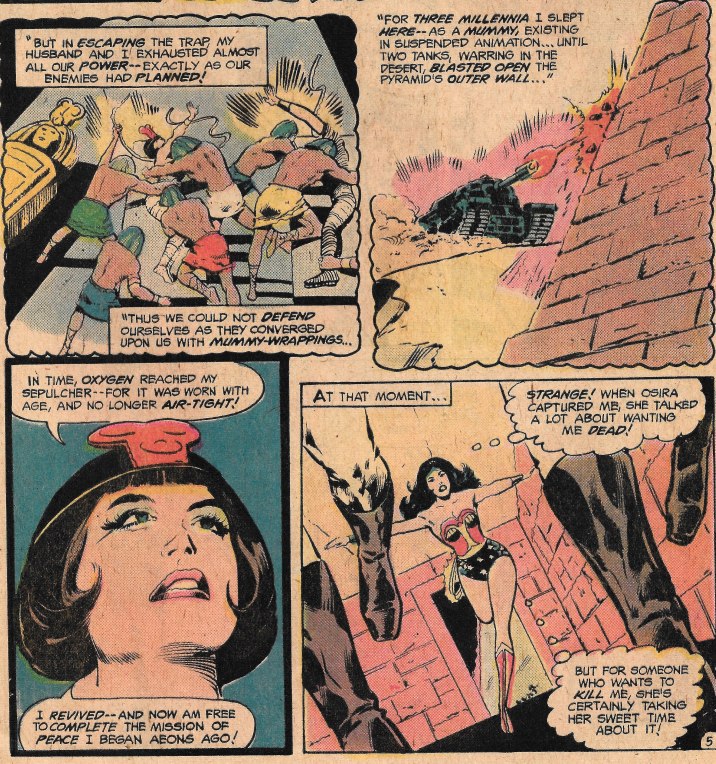 As Osira finishes bringing everyone up to speed on how she got here, Wonder Woman has caught up to the two brainwashed guards.

I can state that certainly seems she's strong enough of a woman for this to count as a feminist comic. I'd like it a bunch more if she was just fighting to free the world from Osira's grip without the added plot of fighting for her boyfriend Steve's freedom as well. 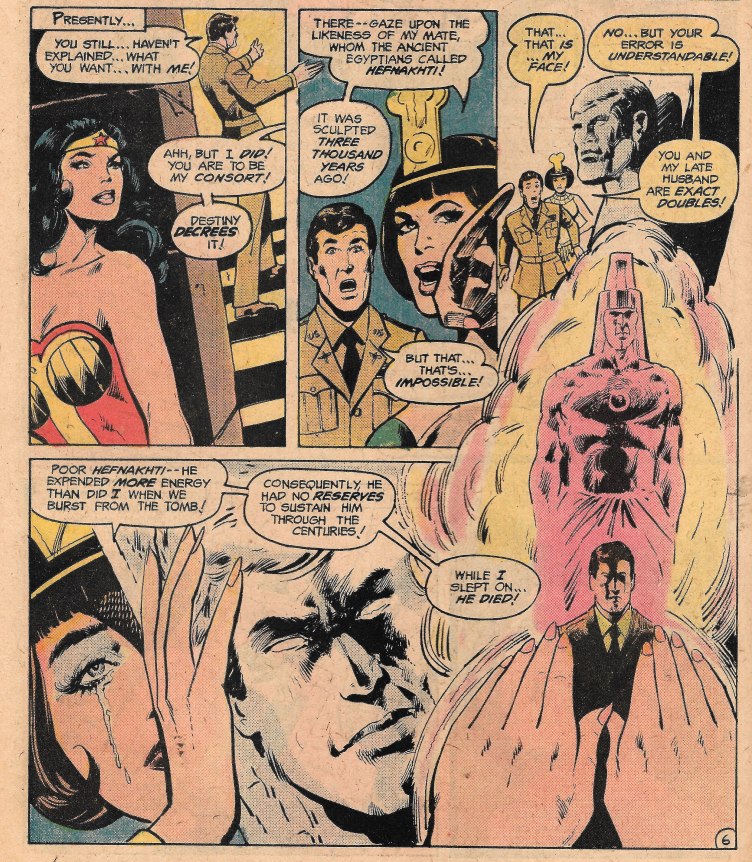 Alas, Steve is a necessary component of the plot, however. And I like this plot quite a bit, so go with it for a moment.

Osira loves her dead mate. Steve looks like dead mate. So she brings back his dead spirit to take over Steve's body. 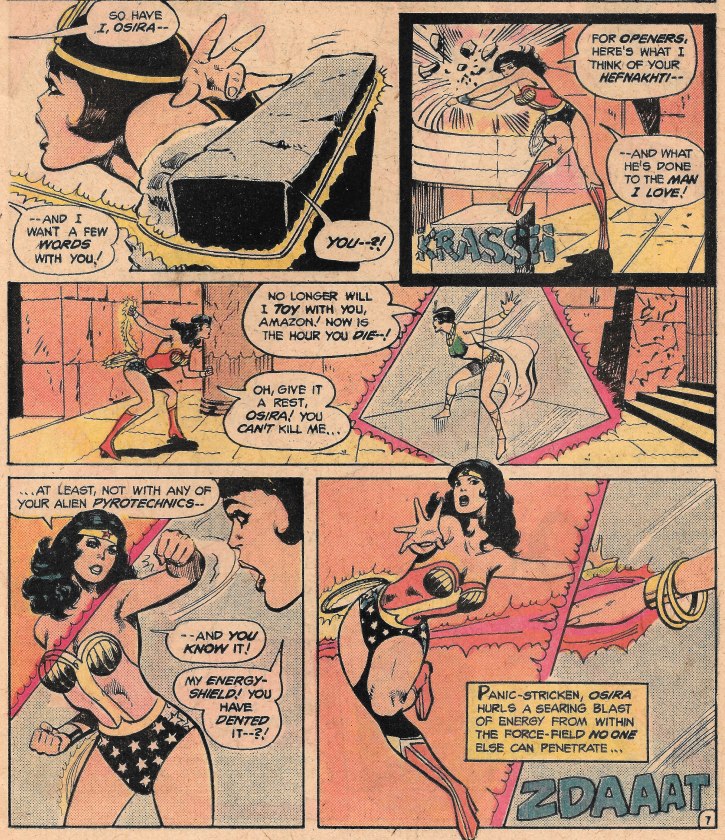 …Wonder Woman isn't having any of that. It is on, Girlfriend! Also appears Osira's energy is ebbing. Wonder Woman keeps the pressure on and has another trick up her sleeve. 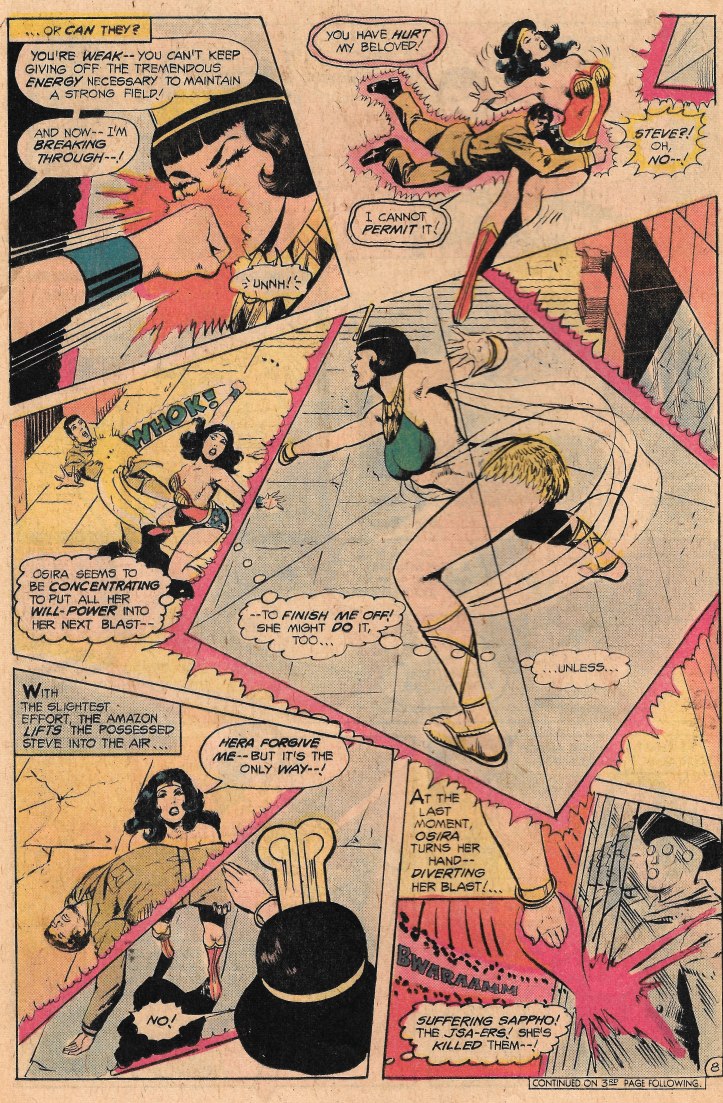 Sadly that looks to have gotten the JSA killed. Looks can be deceiving, however. 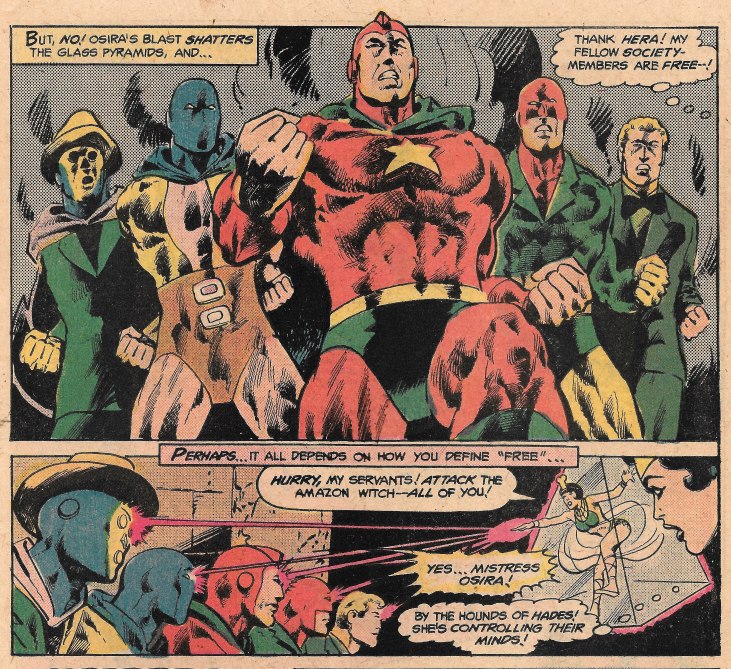 NOW it is REALLY ON! Wonder Woman vs the bulk of the Justice Society. Yup! I remember why I loved this comic so as a kid. And I didn't really know who the JSA was at the time. 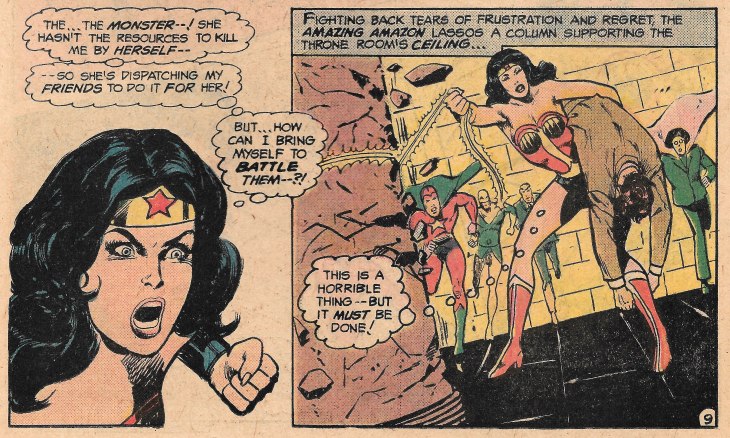 Wonder Woman's first act is to bring the house down on everyone in a bid to slow down her adversaries so she can escape with Steve.

And sadly this version of Wonder Woman couldn't fly without her invisible jet. Here she is forced to user her lasso that is "infinitely elastic" (whatever that means) to scoot her way on over to Giza. 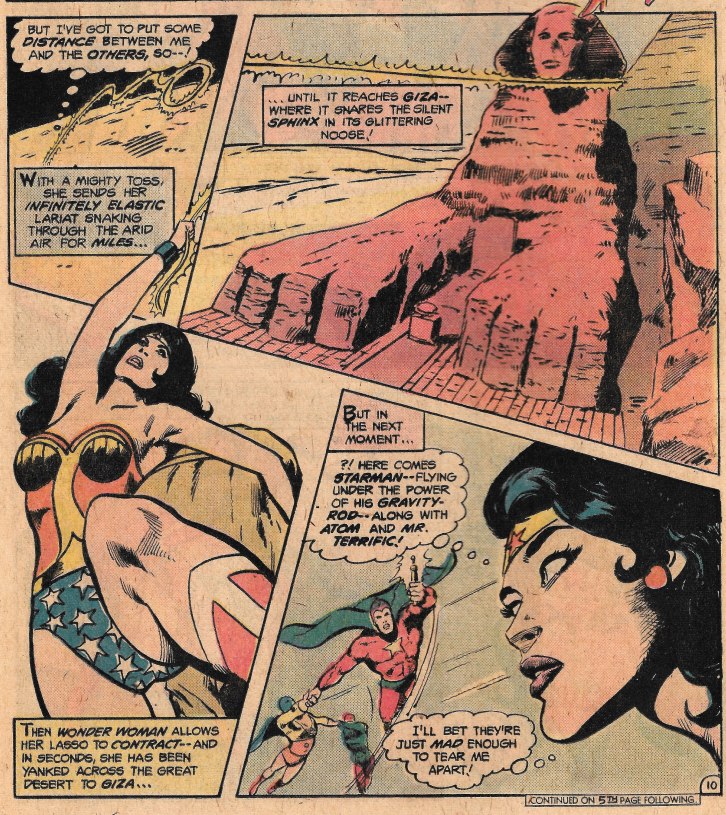 That's far enough for Sandman and Johnny Thunder to be left behind, but Starman drags the Atom and Mr. Terrific to her almost immediately. Ring that bell, because here goes JSA verses Wonder Woman, round one. 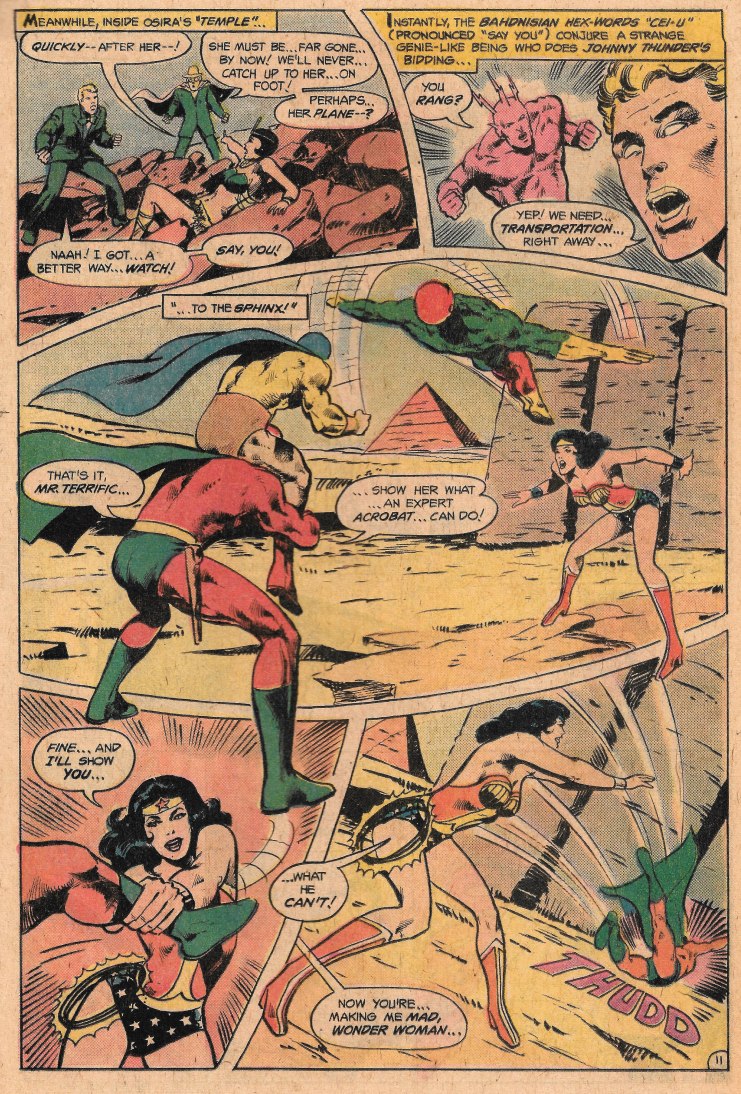 Mr. Terrific is out for the count. 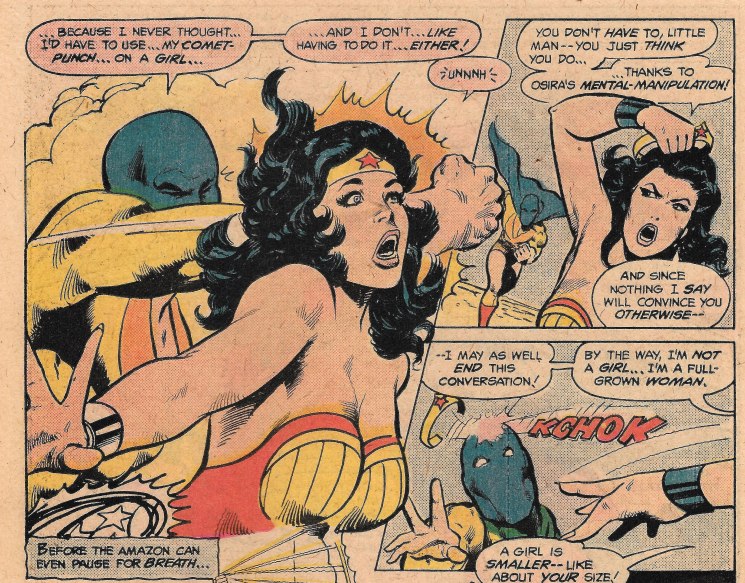 Atom tries to take WW out from behind with a lame-butt suckerpunch and is himself done in by a thrown tiara. Also his poor widdle ego has to be bruised. Wonder Woman called Al "small." 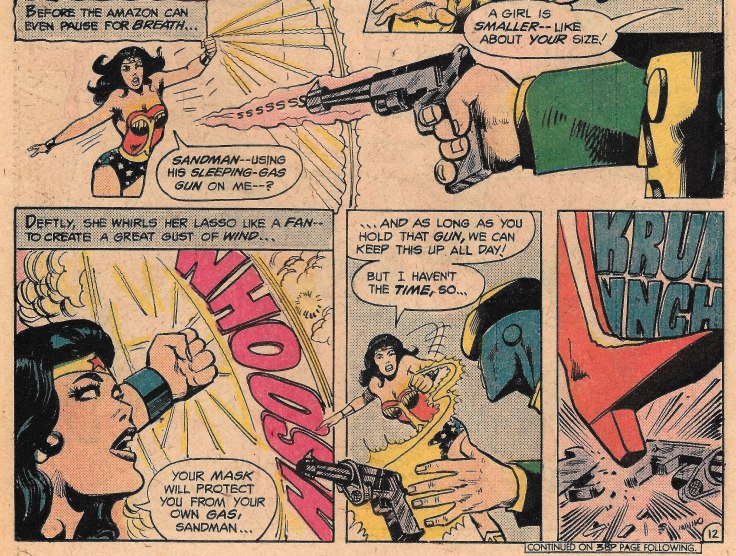 Sandman has his gas dispursed and his gun taken away then smashed under Wonder Woman's boot heel. Seems no one on this team is posing a challenge. 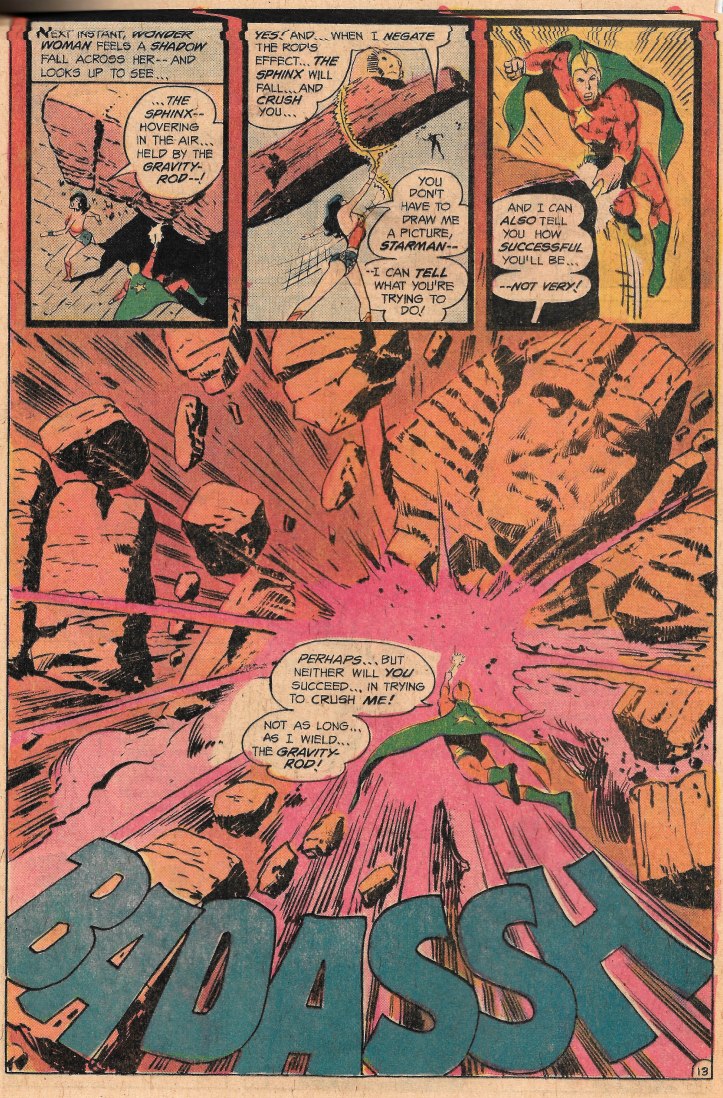 And then Starman drops the friggin' SPHINX on Diana.

And she survives. And looks to be coming out ahead. So much so that late arrival Johnny Thunder is having an argument with his genie Yz about helping Starman before he gets taken down. Luckily Yz isn't mind controlled and can freely interpret Johnny's wish however he chooses. 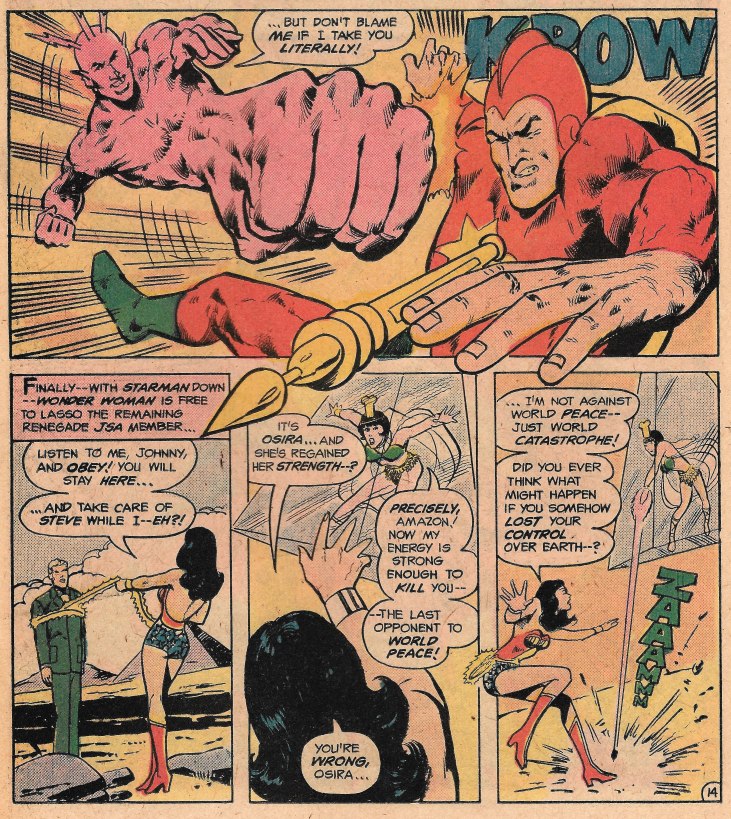 Way to go. And that's how Wonder Woman downs the JSA.
There still exists one more battle to face. Osira shows up with her power at full strength and Wonder Woman starts using logic to take her down. What if Osira falters for even an instant in her control over humanity? What then? 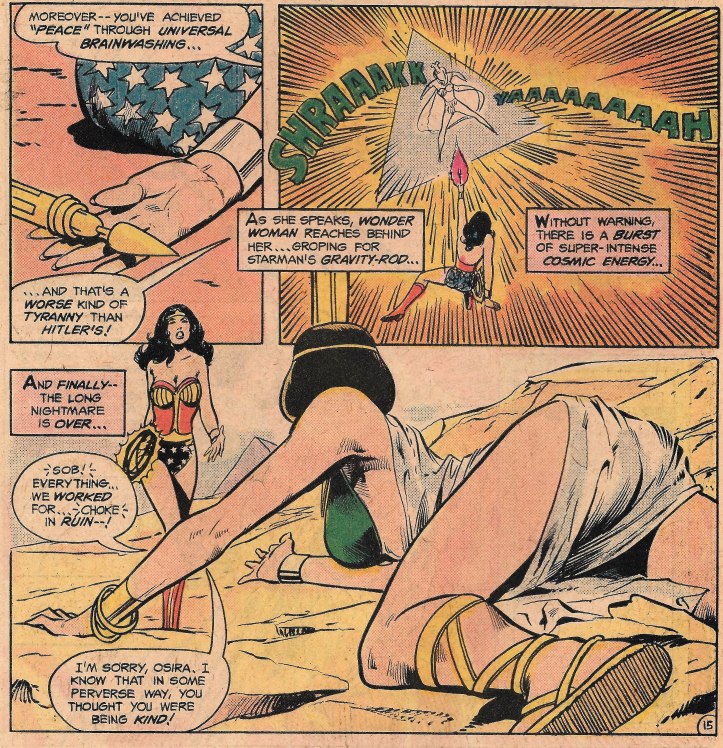 …she sneaks a hand over to Starman's gravity-rod and zaps the crap out of Osira. And here is where the book really differs from so many other superhero tales. Wonder Woman knows Osira's motives aren't necessarily evil. She has good intentions but is going about things in all the wrong ways. 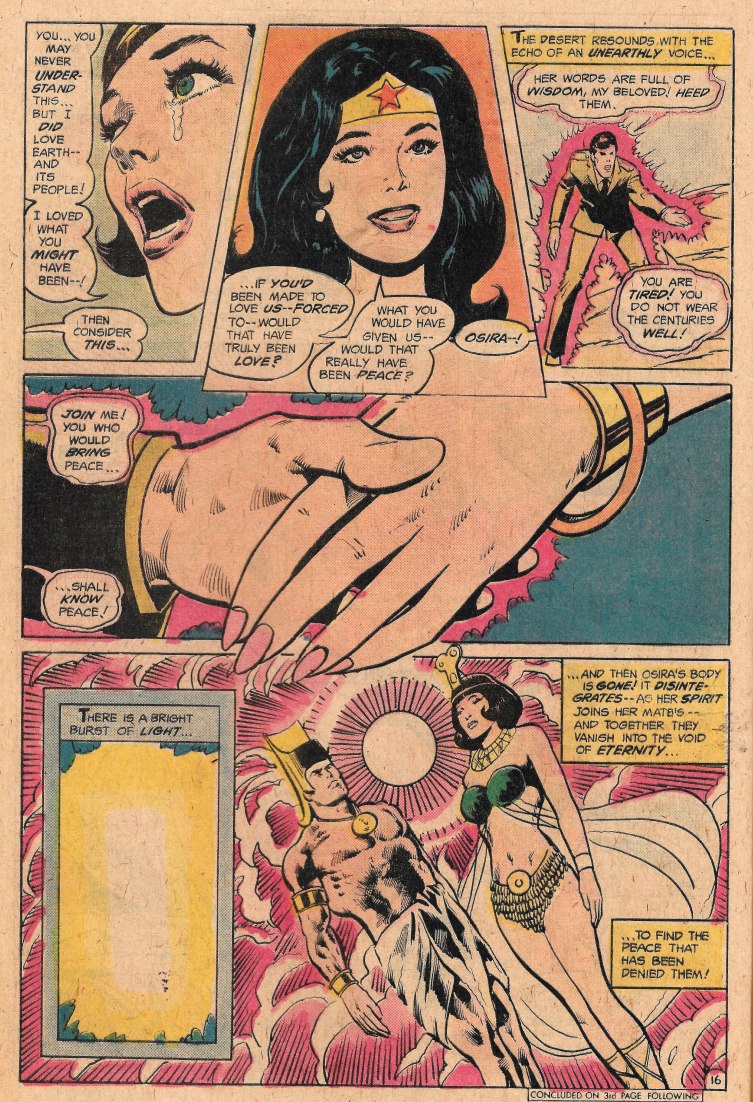 As such she tries to get Osira to see the error of her ways and is completely successful. Geeze, that's no way to create a rogue's gallery. No recidivism if all your foes turn into law abiding citizens or, in this case, join with their departed in the journey toward alien heaven.

Sadly this ending does leave some loose ends… 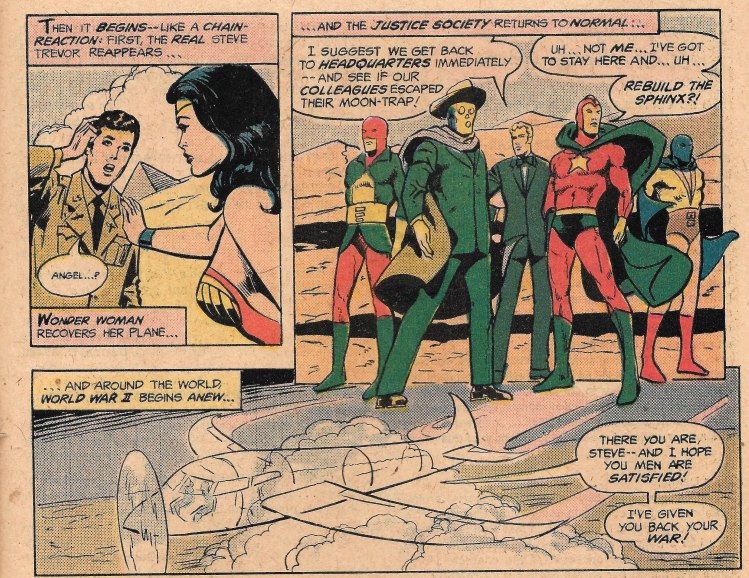 I love Starman in this. LOVE that line. Yeah, you broke it-you bought it, buddy. I wonder how long it took him to piece it all back together.

Wonder Woman can't seem to help rubbing it into Steve's nose a bit that men started the war. 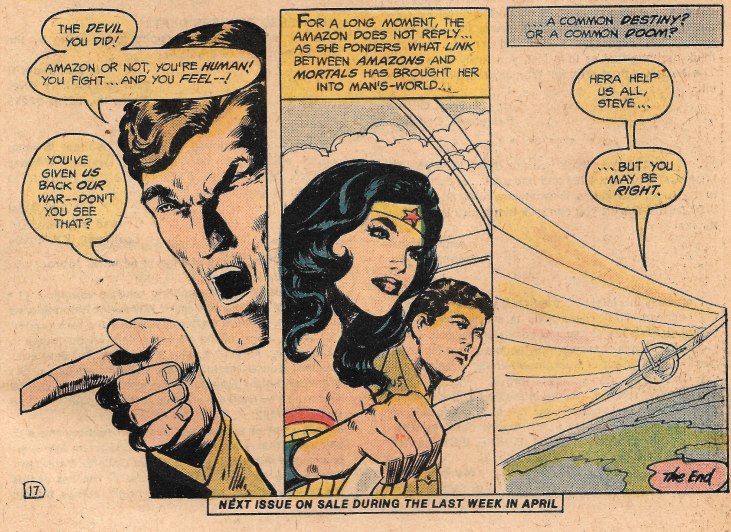 And Steve fires right back at her. However, if it truly is this Wonder Woman's war, in the end everyone will come out friends.

So a re-read of this only heightened my love for it. Such a good story. Wish I had more from that era if they were all of this quality. Art was clean and inventive. Highest recommend. If only I had saved more of my pennies back then for Wonder Woman.
Posted by SonOfCthulhu at 2:43 AM