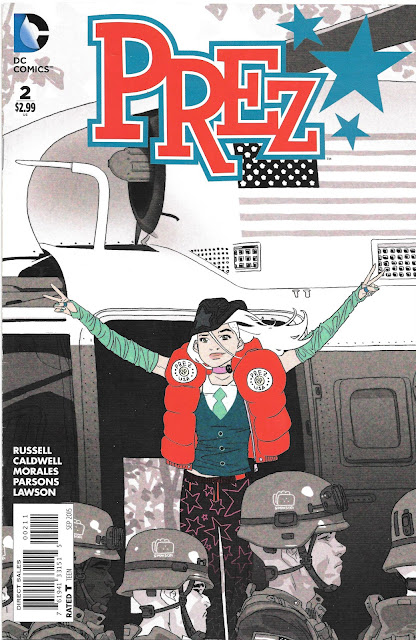 A House party jamz in an unconventional winner

This is a POST Election Day special review! Disappointed with last night's results? Jubilant with a win for your side? Either way, you will find lots to enjoy here. Or at least a distraction from the bottomless pit that has opened before us all. Because here we ask the question: what happens when there is no clear winner in the Electoral College? Need the answer? Read on, McDuff!

We are off to the races in Prez #2 with no one getting 270 electoral votes which means of course...
*waits for that one guy who paid attention in civics class to speak up… 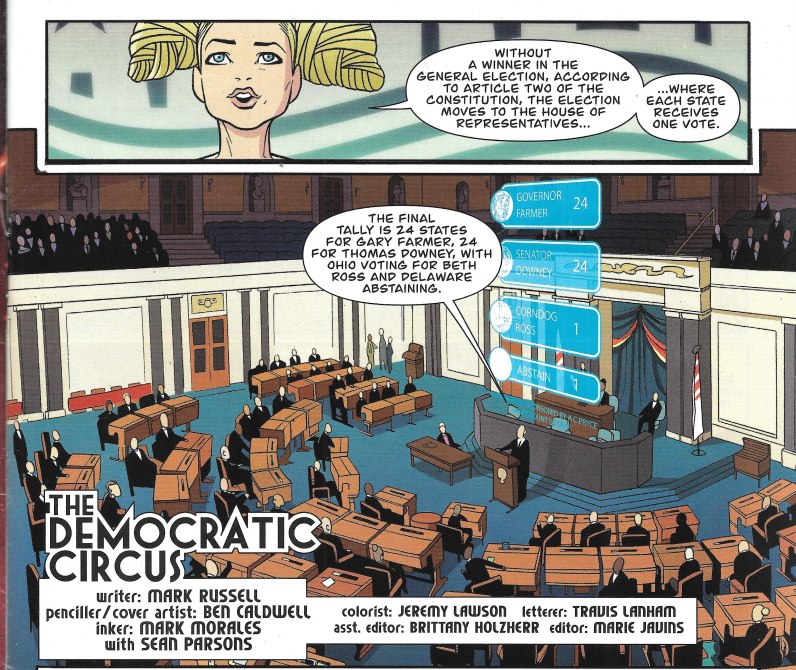 Uh, wait a minute. Does that say electoral votes or "states." What the hell are "States"?

Either the book dumbed things down a bit or Mark Russell was ALSO sleeping in Government class. I'm going with the former since the next bit is accurate. Or at least as accurate as my 30 second reading of the 12th Amendment can confirm. The House of Representatives votes for one of the top three contenders and that decides it. Now just go with me in this "all or nothing with each state still only getting one vote" setup that Russell puts into place.

So they cast votes and we're done, right?

Luckily, in this absurd world that Russell is presenting us with, that ISN'T what happens now. What happens is a lot of backdoor politics with tons of deal-making, deal-breaking and lots of humor. Let's just have Senator Thorn kick things off. 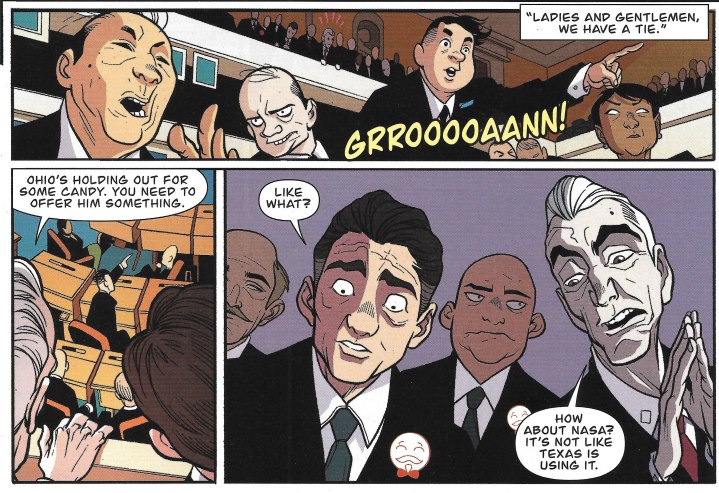 You can't move NASA to Ohio.

And I know Russell knows this. There's a very good reason WHY NASA is in Florida and Texas. Why? The short answer is rockets and physics and science!

The long answer is that shooting rockets into orbit requires lots of speed and the middle of the Earth is traveling at the greatest velocity as it spins on its axis. Since we want to conserve fuel, we start our journey at the point on the Earth already traveling at the fastest speed so our rocket is traveling at 1037 mph as soon as it leaves the launchpad and makes it into orbit.

Moving NASA to Ohio would add pounds of fuel to a rocket just so it could get up to speed, pounds where every oz is critical. Not to mention that the weight on the rocket cuts into the amount of payload you can carry.

What I am saying here is this isn't just crazy, it is cut your own throat crazy AND I think our writer knows it THUS he is using the MOST outlandish pork-barrel he could come up with to play to that part of the audience paying attention.

And speaking of paying attention, corndog-girl a/k/a Beth Ross, the third most electable Presidential candidate isn't doing that since she is still too worried about her father. But that doesn't mean she doesn't get the answer wrong. She's sharp. 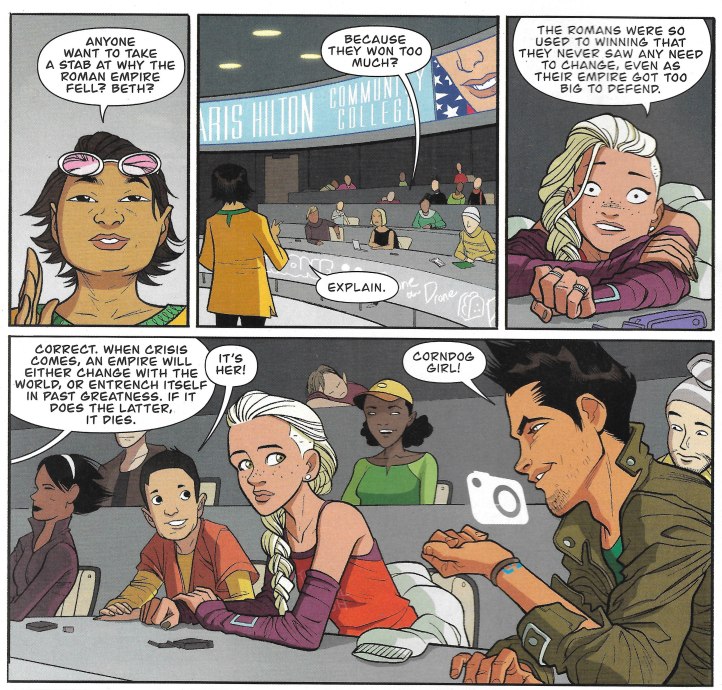 But sharp isn't getting her father's medical condition taken care of. 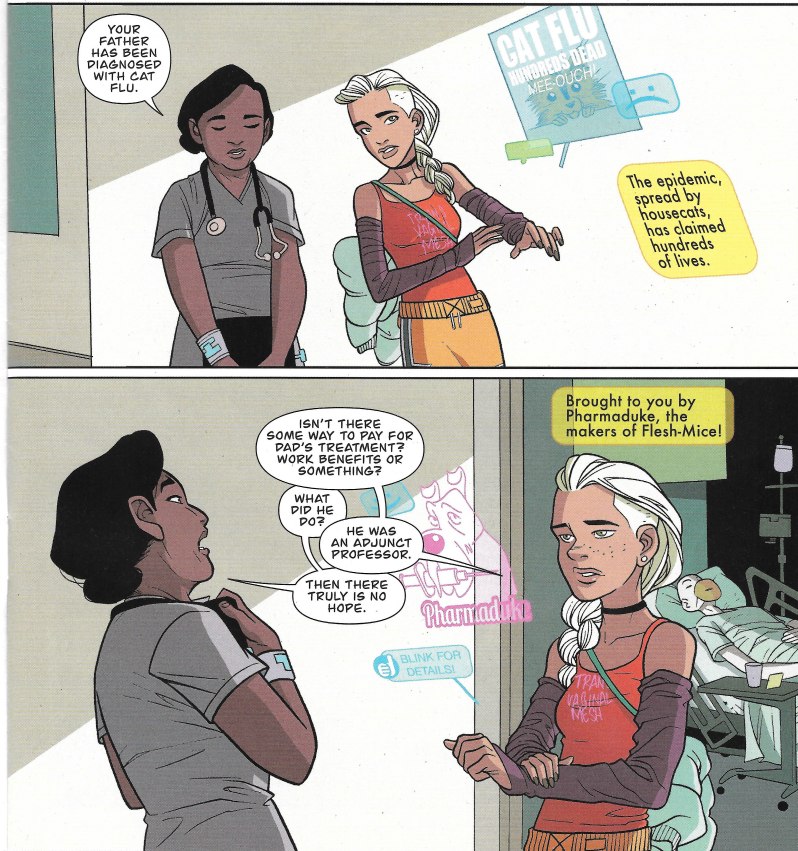 Love the jab at him being an Adjunct Professor as some kind of death sentence.

Beth steps in to see her Dad, for perhaps the last time, accompanied by Carl, the end-of-life-bear. 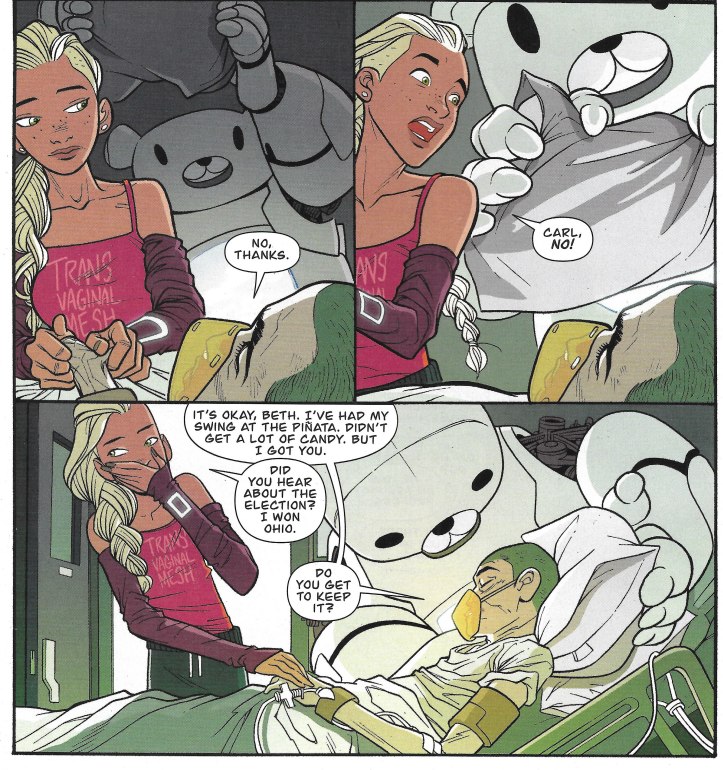 And this wit is where we pin our hopes on things. Perhaps Beth is her Father's daughter. Maybe she isn't old, but perhaps she's wise. As wise as a guy that tells her this as a way of being encouraging. 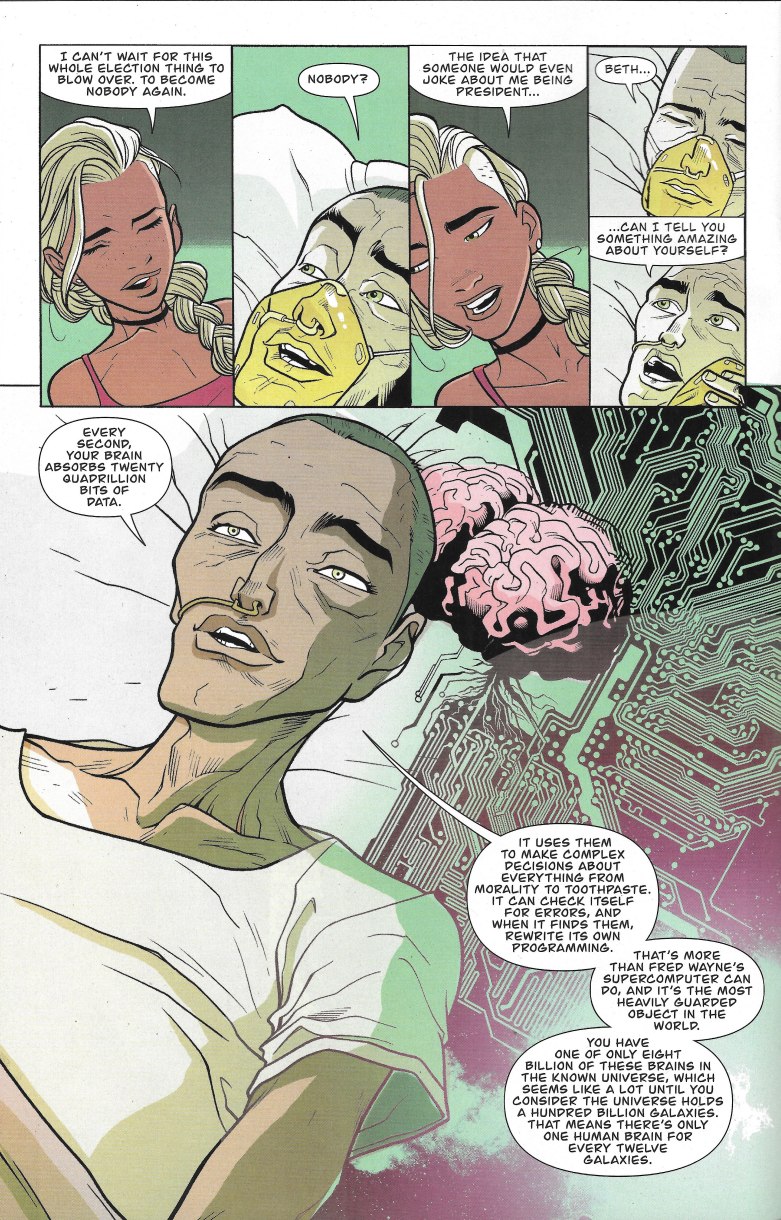 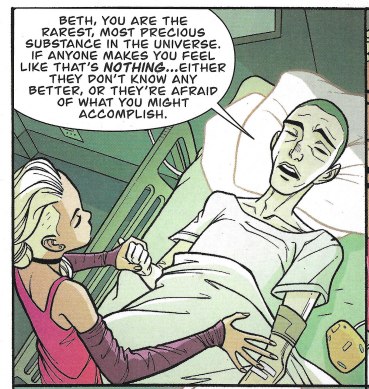 And with that, he's gone.

I don't really even know this character and I find myself touched by this exchange. Great job, Russell.

Meanwhile the presidential candidates are doing as much wheeling and dealing as they can. 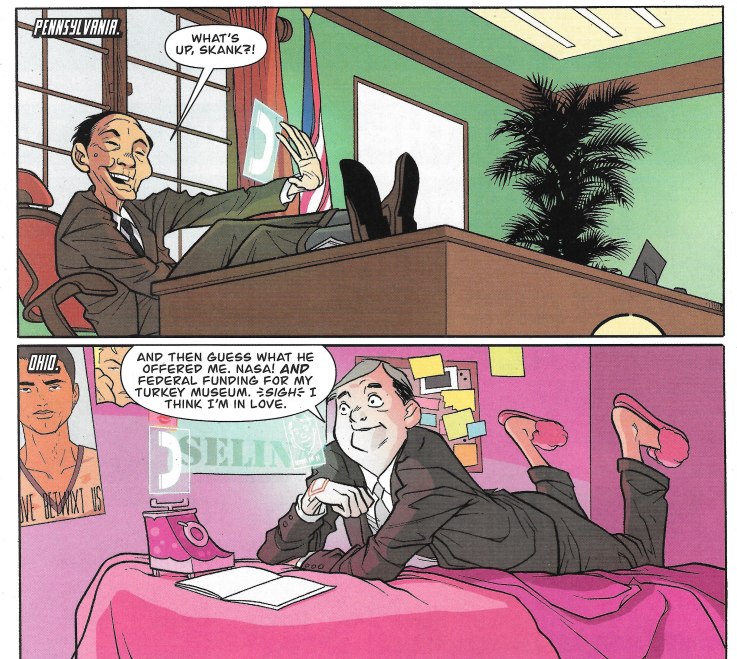 I love how the Representatives are all shown like silly schoolgirls because THAT is the mentality we expect from them in real life as well. I also dig this exchange with the Texas Representative: 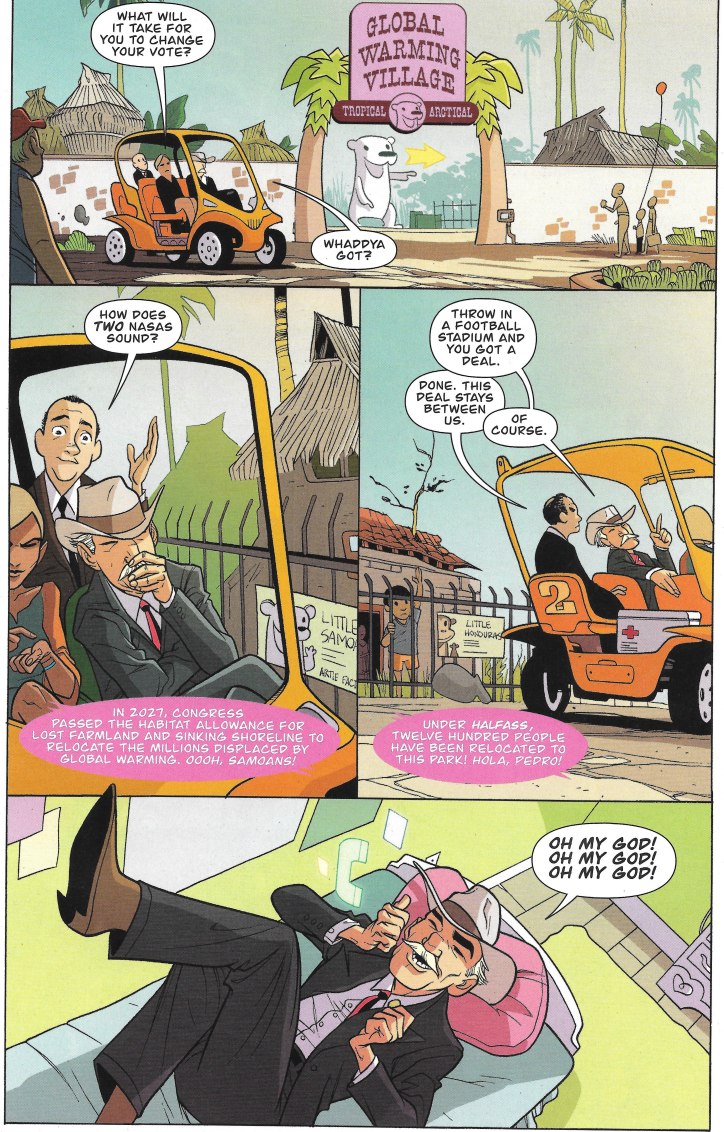 TWO NASAS! I DON'T EVEN… oh, lol – Russell, that line takes the cake.

All this maneuvering leads to this… 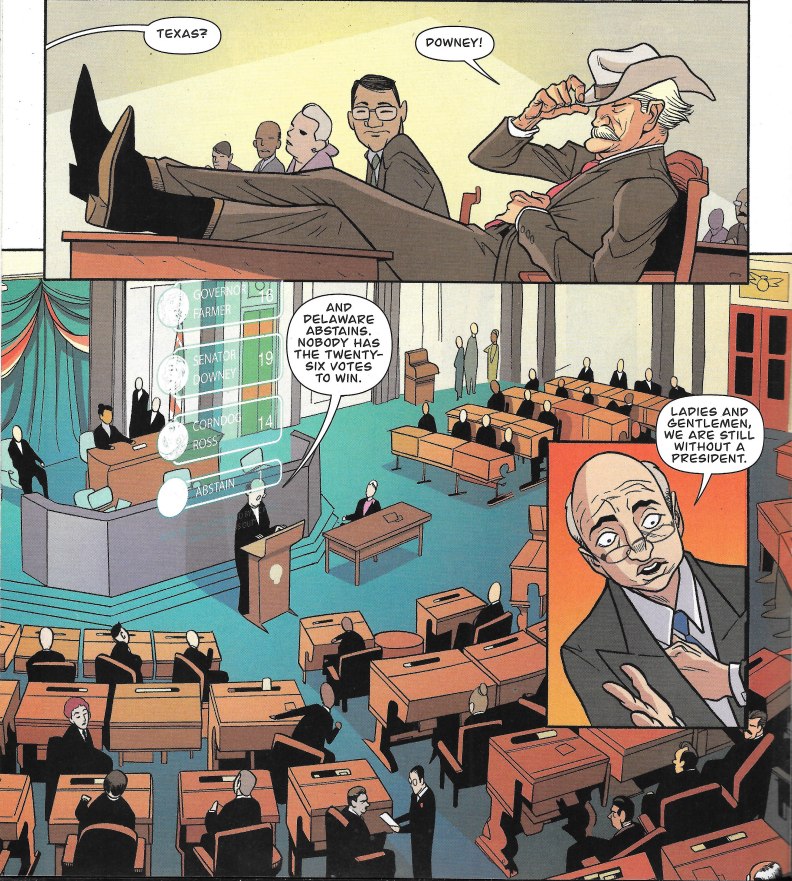 And back to the backroom bargaining tables we go. Only this time with a twist that we will get back to in a moment. But first, back to Beth, who after losing her Father allows these two door-to-door missionaries into her home. Mormons, you're thinking, right?

But no. Beth sneezes in the drinks she is bringing them on accident. 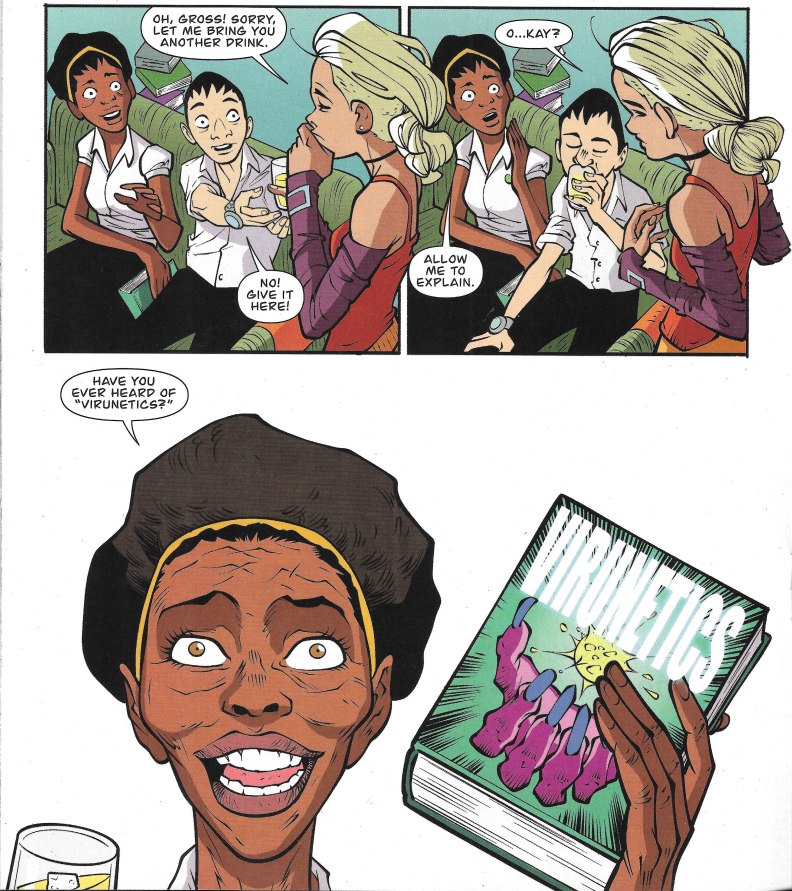 Oh crap! Now they are going to skewer L Ron Hubbard. THIS I cannot wait to see. 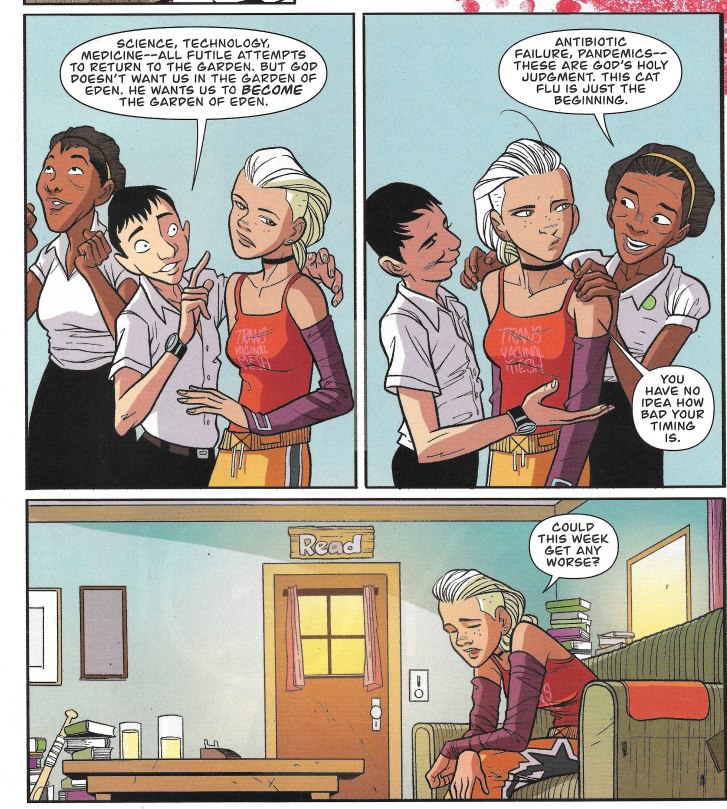 Pooh. That should have gone better. Still funny, just not as on point as the rest of this. And by rest of this, I mean the parts about the election. Seems the goodie train has been rolling into everyone's town. 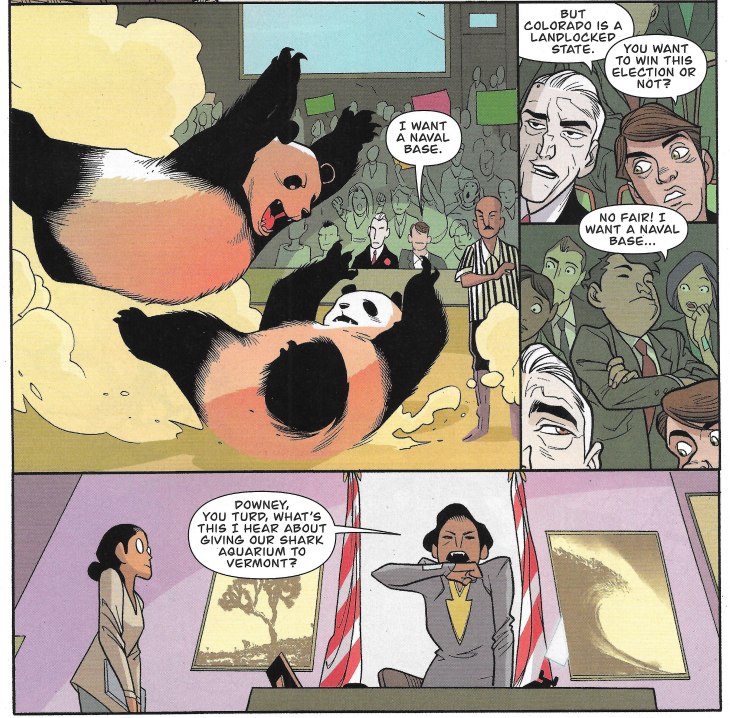 This only encourages the Representative's greed however. 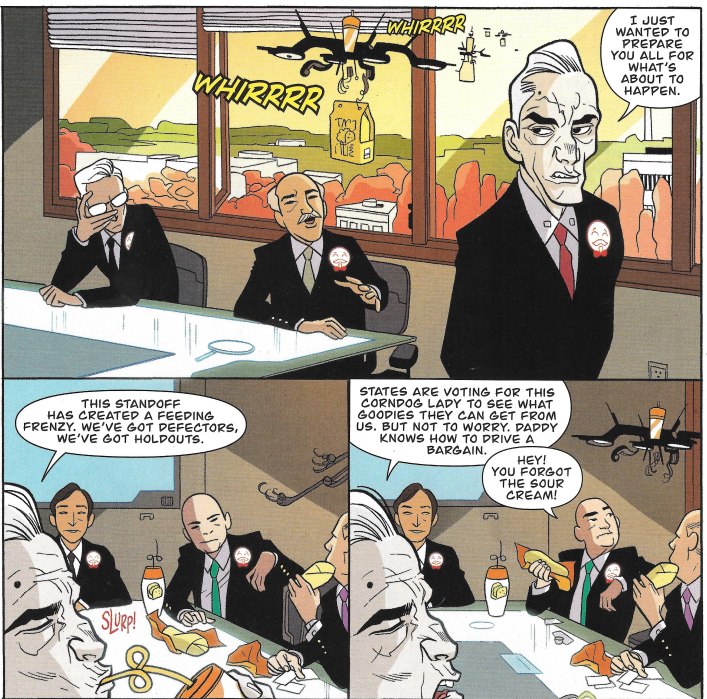 Leading to this new stratagem: cast votes for Ross and see who will give over more appropriations to gain the votes back. Of course they aren't crazy. They only vote enough to get her half-way there… 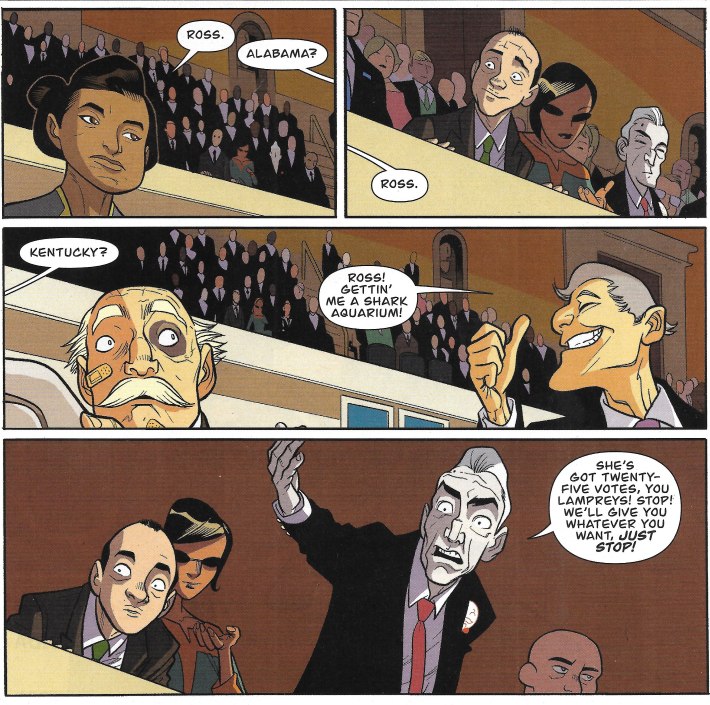 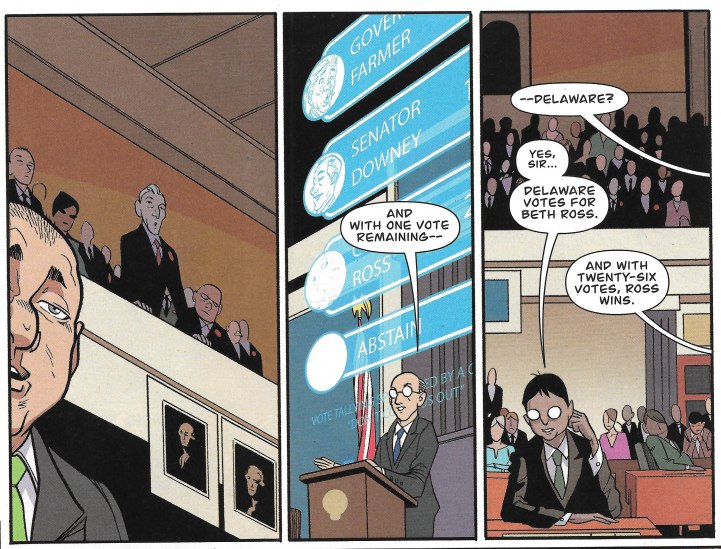 Yup. Just like that. And everyone's special entitlements just vanished. Thorn looks like someone shot his puppy. 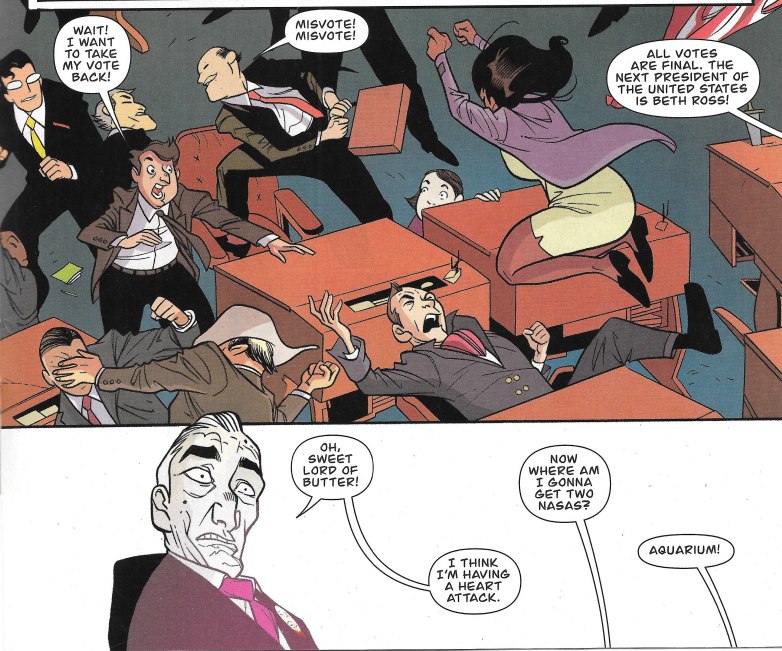 As for Beth, she gets "rescued" from a mob of reporters while visiting her father's grave by a man in a black helicopter. 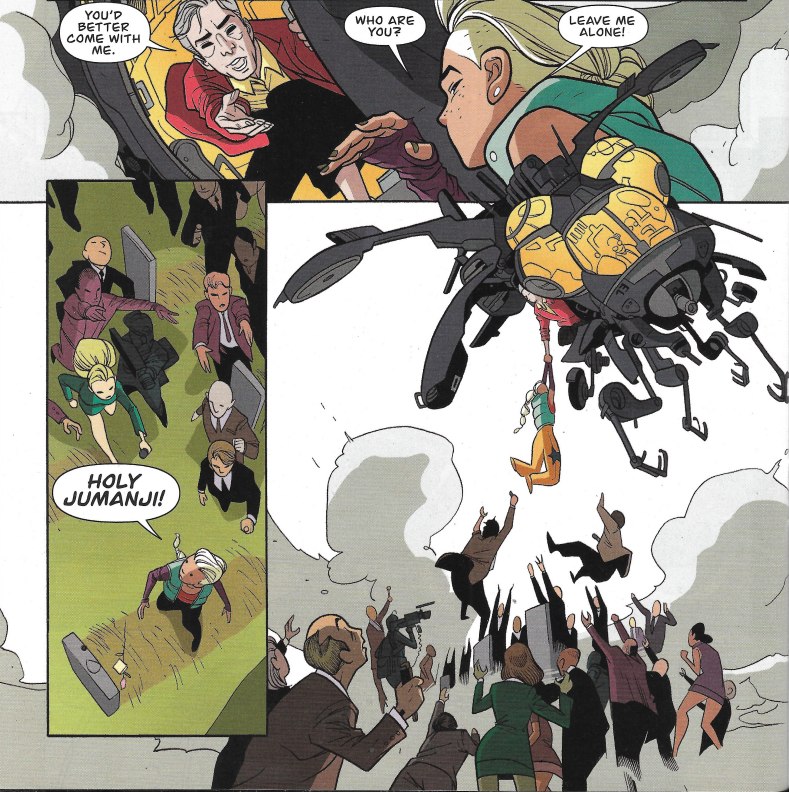 Maybe board games are a religion in the future? Who knows?

Either way, Thorn is in the hospital, not doing well. When asked why… 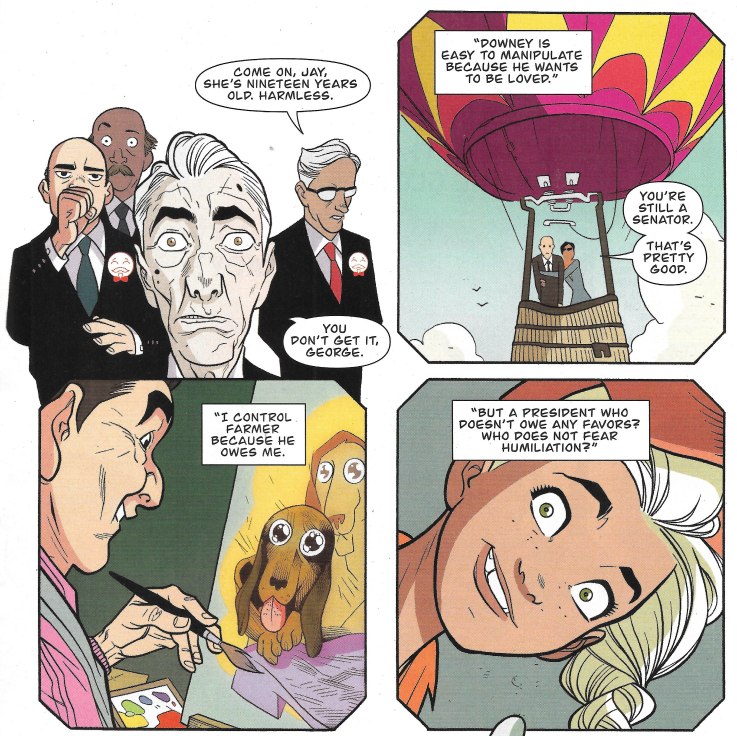 Yeah, he's looking at an uncontrolled variable, one that will surely make his life hell. 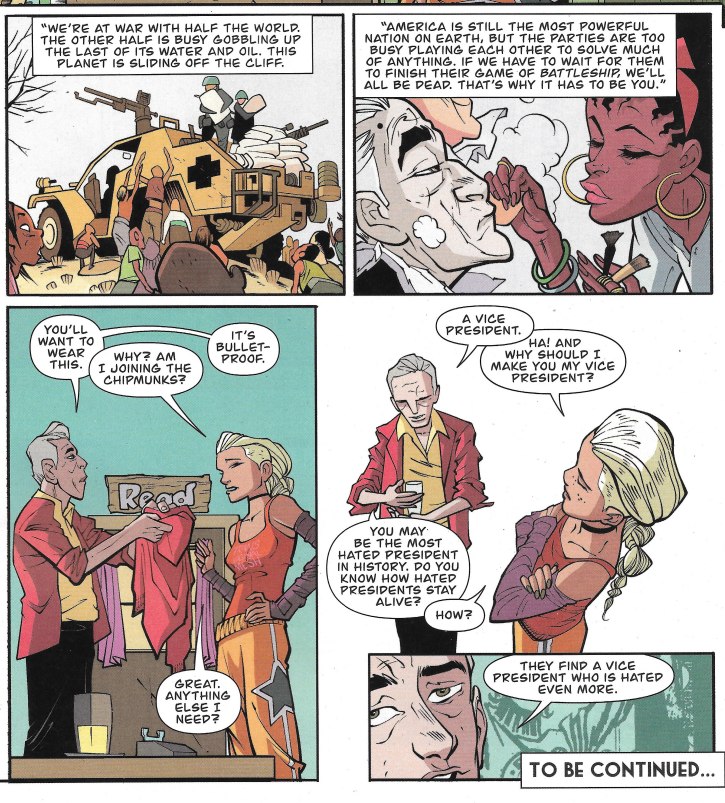 It looks like America's newest President has her work cut out for her.

And with that, the Crapbox is going to take a rest. It's been a long fun ride since October 1st and posting once a day started, but I've run out of steam. We WILL be back this Thursday with something good and maybe a new TWICE A WEEK posting schedule, since many of you have been coming back again and again. Until then, have a great day and a wonderful comic reading experience.
Posted by SonOfCthulhu at 2:26 AM