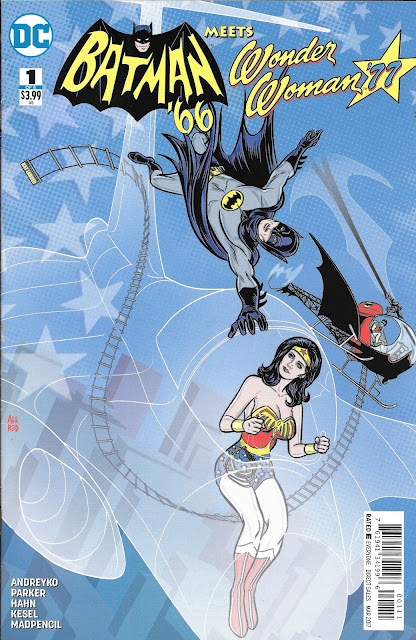 …thrown completely away (at least in this first issue)

I watched both of these television shows when I was a kid. Being born in '67 means that I only saw Batman in syndication, which back then meant every single school-day afternoon. It was silly, but the giant death-traps and the deadpan acting brought me back. As well as the villain-of-the-day chewing on the scenery. Same Bat-time. Same Bat-channel.

Wonder Woman came along when I was ten and at that tender age I was all about superheroes and superhero shows. It was campy but fun. I enjoyed it for the cheese and the cheesecake. I can think of very few women who match up to Lynda Carter and her beautiful baby-blues. 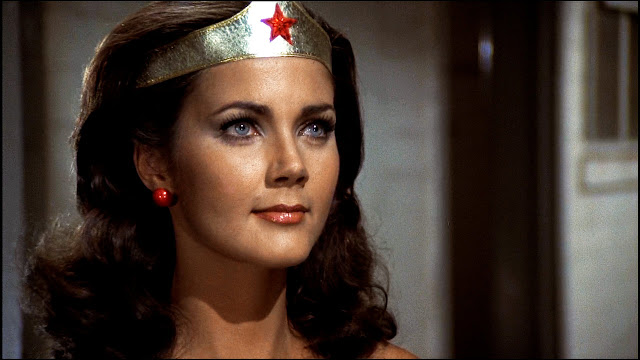 Or her dazzling smile that never needed the extra sparkle the effects department would add. 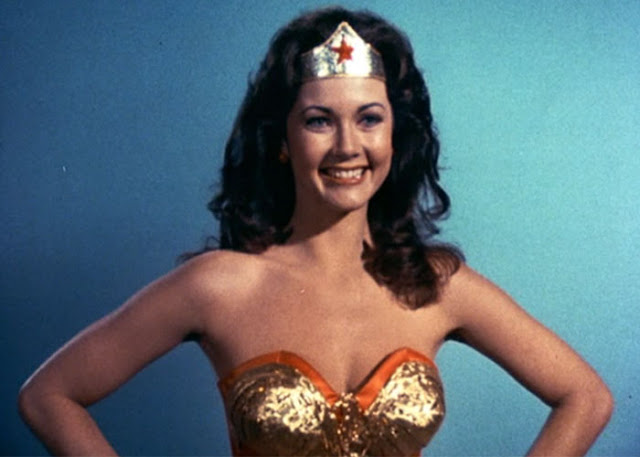 And that amazing figure and those incredible legs. 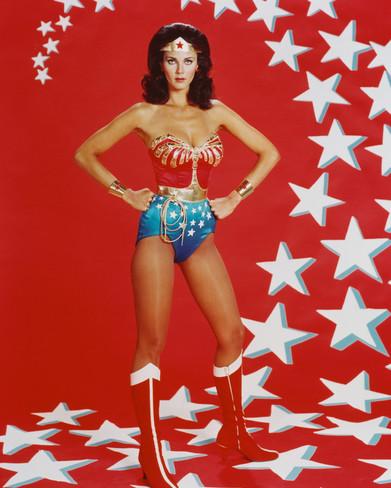 Ms Carter was more than just my schoolboy crush, I think for those three seasons she was everyone's. She had the entire straight male population captured without ever using that magic lasso of hers. Part of it had to do with how genuine she played the character, how in every scene she imbued Diana Prince and her alter ego with love and hope and grace.

Such a classy, talented lady.

When this issue popped into my local store, the nostalgia factor was too great and I had to scoop it up. I mean, who wouldn't want to see these two TV icons interacting in the closest medium to the real thing we are likely to get?

I was sorely disappointed, as you soon see.

We begin out tale with a pair of books which act as a Macguffin. Something everyone in the story will want, bad guys for nefarious things and the good guys working to protect the free world. 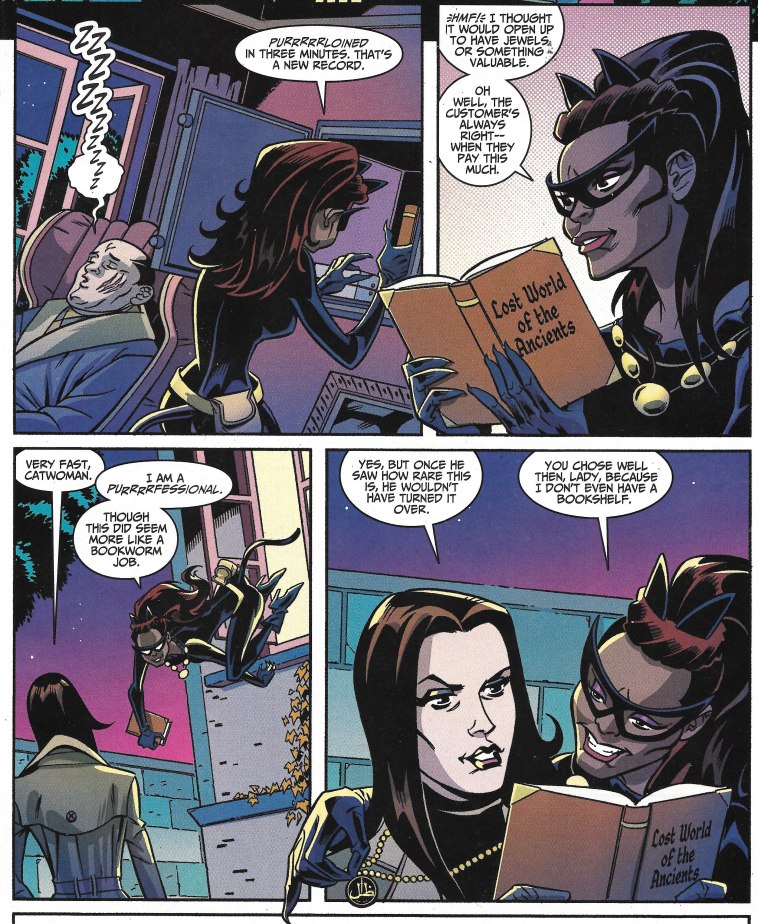 Here we see Catwoman stealing it and then delivering it to the woman who hired her to purloin it. We get right away that the camp factor in this title will be high, as the young lady is waiting just outside the house she is stealing it from. That isn't my problem with this book, the camp aspect is just fine.

I chuckled a bit at the Eartha Kitt-ness of her purring words. 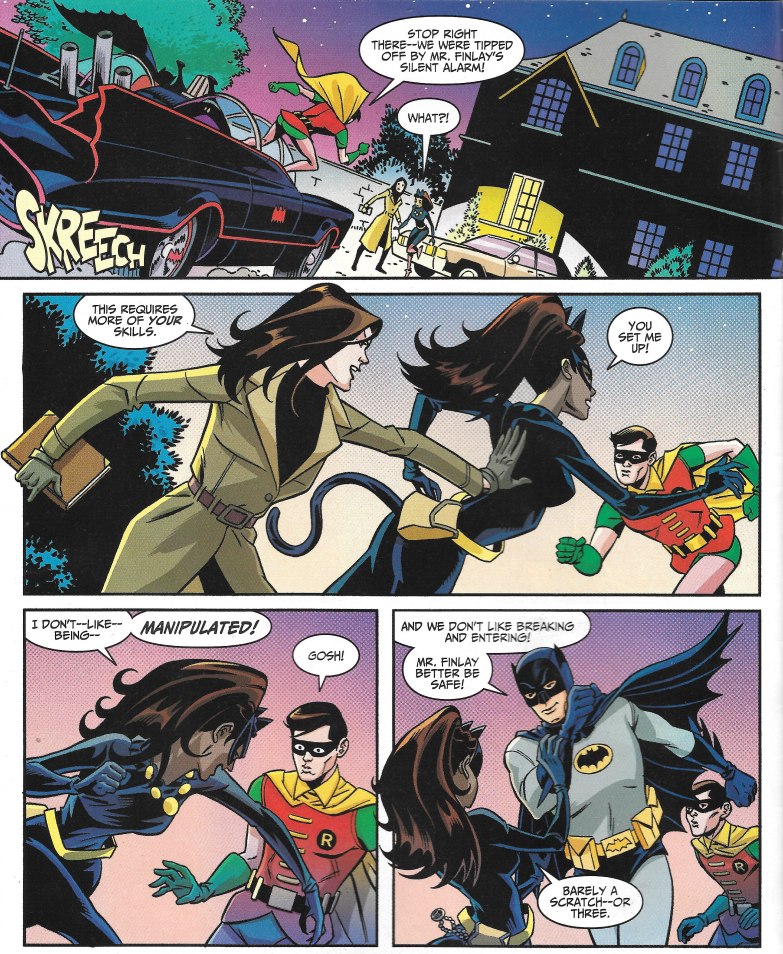 All Catwoman's fun and games ends as Batman and Robin show up in their signature '66 Batmobile (Atomic batteries to power, turbines to speed!) and catch JUST Catwoman, allowing our trenchcoat wearing brunette to just walk to her car and leave. Again, that's part of the campiness of all this. Batman is kind of not real bright. 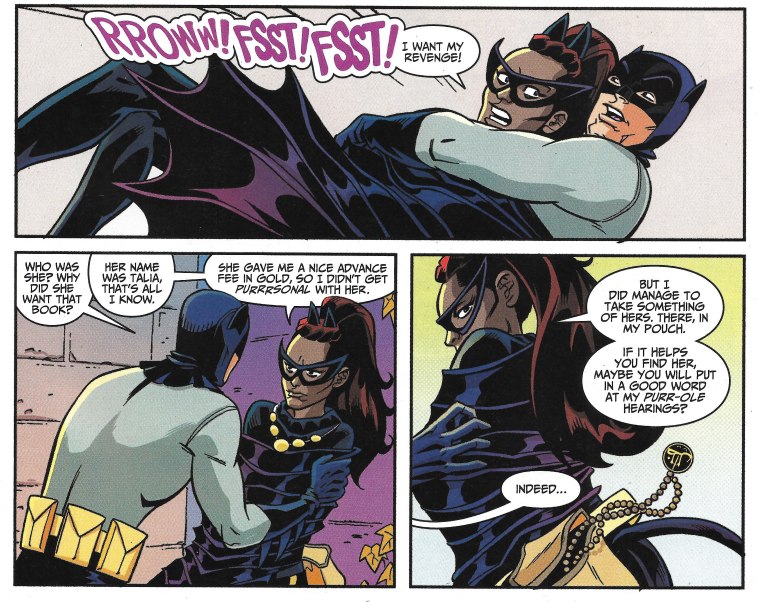 A very brief scuffle takes place wherein Catwoman drops the name of her buyer, which is a bit of a surprise for long-time batman fans. Talia isn't a common name. There's only one place this story can really go and that's confirmed by the necklace Catwoman stole from around Talia's neck. 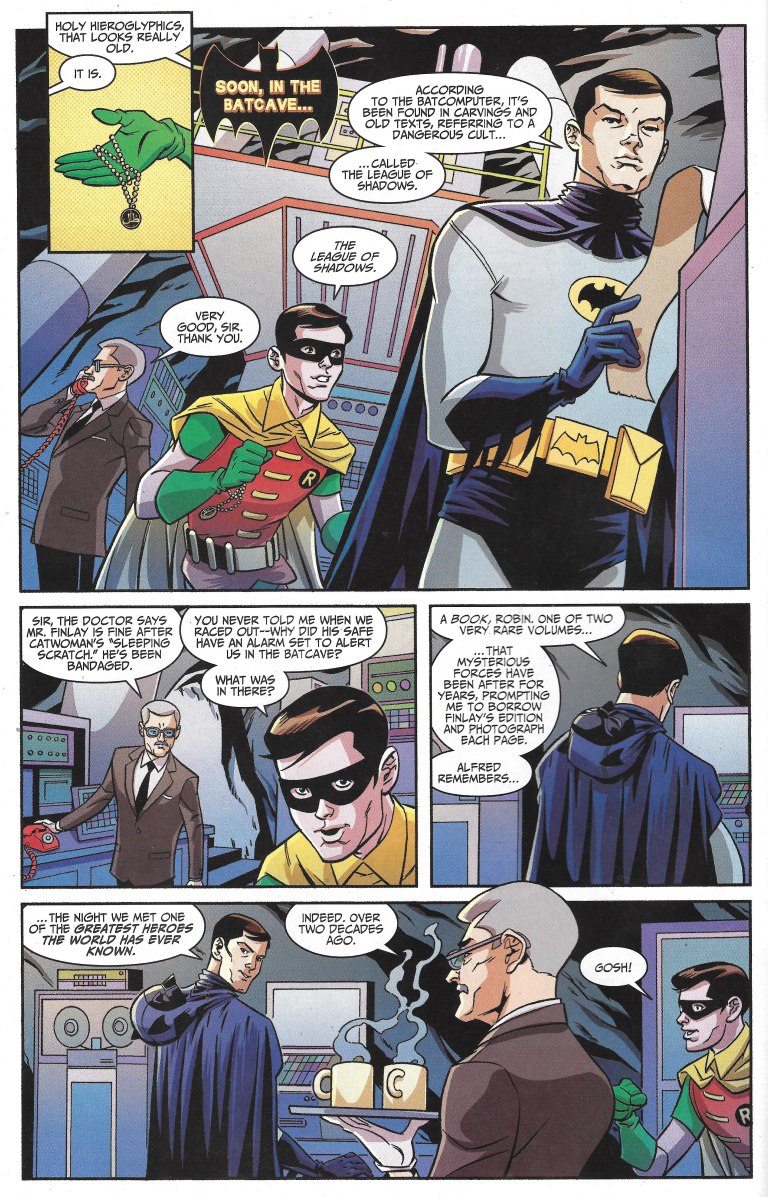 The League of Shadows, or League of Assassins as many of us know it, have been a thorn in comic book Batman's side for several decades. Nice to see them mixing them into the Batman '66's universe.

What isn't nice is Alfred stating that Bruce's last dealings with the League happened over two decades ago, and off the issue goes into flashback land, never to return. At least not for this issue. 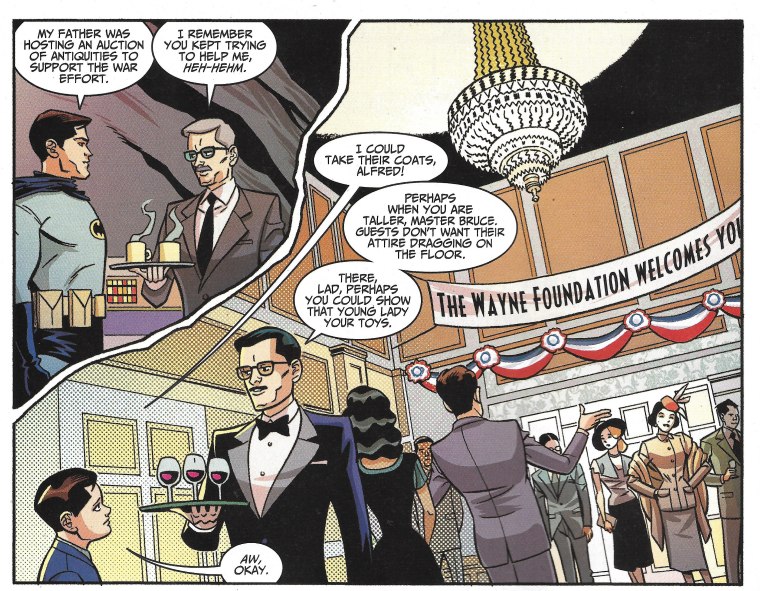 The idea is to set the meeting between Bruce and Wonder Woman during one of the first two seasons of her show. However, unless my brain has short circuited, the third season of Wonder Woman placed her in modern times, soooo Why not there? Either way, this means we will have Wonder Woman meets Bruce Wayne before he was Batman with no Robin in evidence.

Shoot! The whole allure of the book was seeing those two engage with one another, to watch the camp pile up. Instead we get a Batman wrapper that may or may not include Wonder Woman. Even then I'd have to buy the next two issues at least to see if this in-costume meeting of adult Bruce and adult Diana ever took place.

What we do get is rendered in art that is hit or miss from here on out. It's odd to look at it and feel a Bruce Timm Batman: The Animated Series vibe flowing but it's supposed to be Batman from the 60's they are channeling. It is also weird some of the cues the book generates and I'll point out a few awkward panels in a bit. 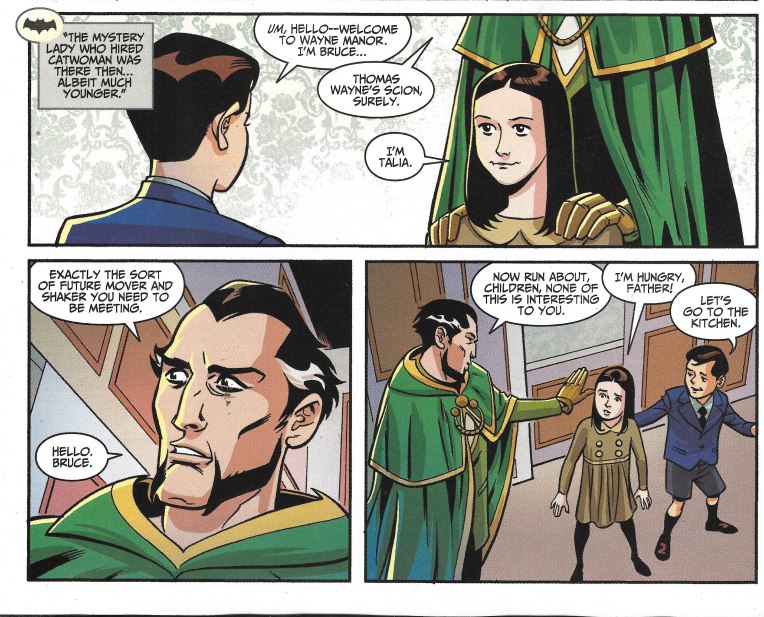 Speaking of awkward, we DO get this historic meeting between young Bruce and Batman's future nemesis Ra's Al Ghul. Oh, and Bruce's future wife, lover, and mother of his child Talia. Well, at least in the DC universe proper that is. No clue what she will end up as here.

At this point I had hope for the book. Hope that we would return quickly to the present, but those hopes were dashed as soon as young Bruce bumps into this guest… 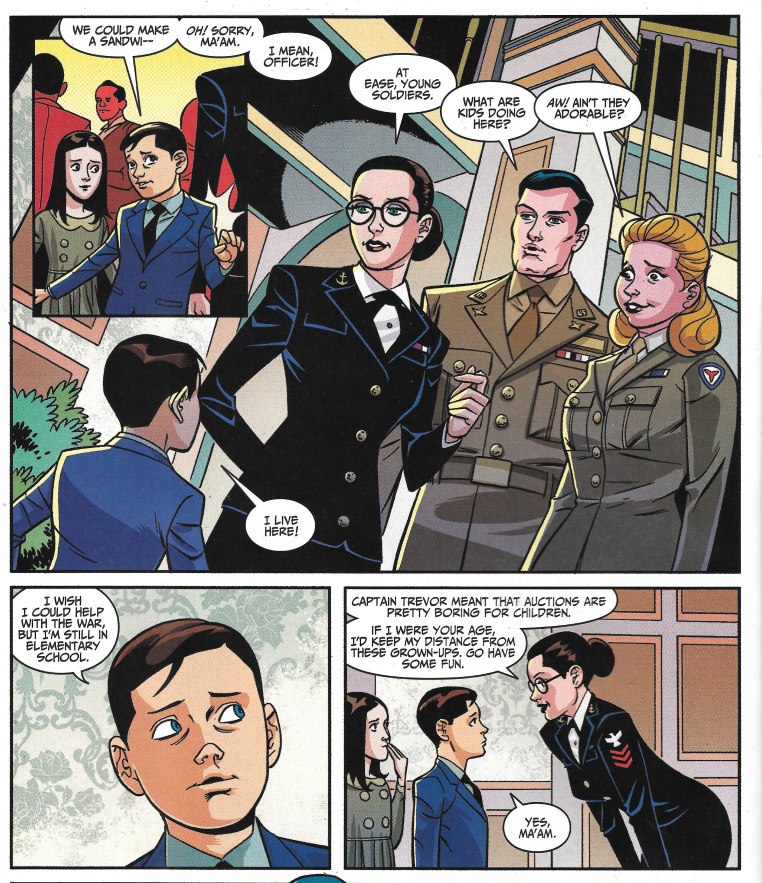 …Diana Prince, who is also Wonder Woman. Bruce offering up help in the war effort is a bit strange to just blurt out, but the writers are trying to establish the period this meeting is taking place. It's ham-fisted and unnecessary, as you will see in a moment.

But first we get handed the reason for Ra's attendance at such a party, the auctioning off of two rare books, one of which Talia has stolen in the present-day. 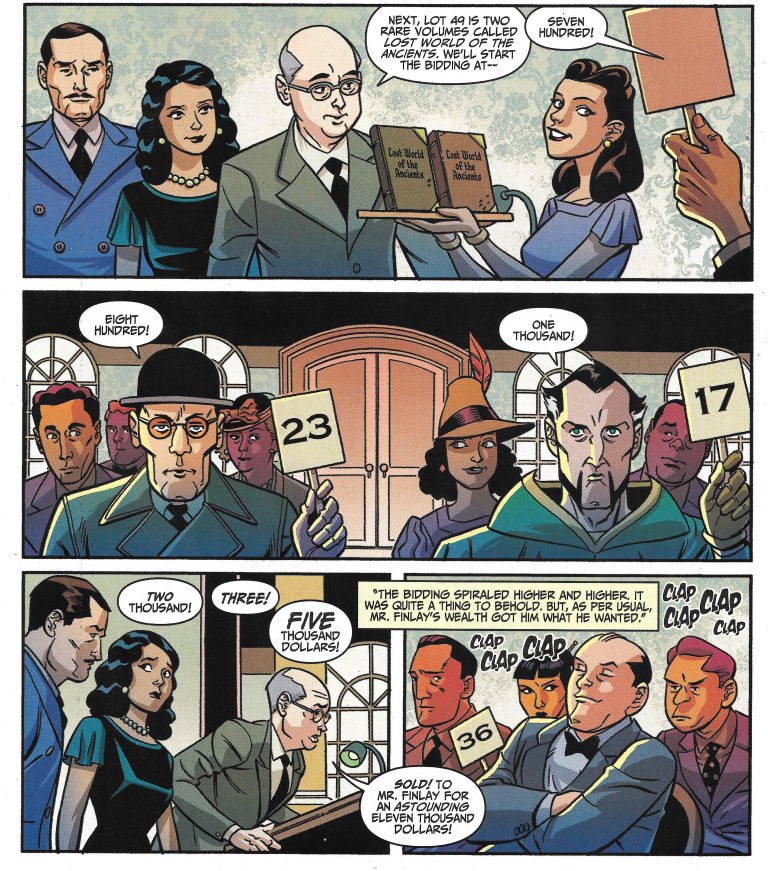 In a three way bidding war, a Mr. Finlay ends up with the spoils. Unfortunately he's going to have a devil of a time keeping them as he is accosted by both Nazi agents AND members of the League of Shadows. 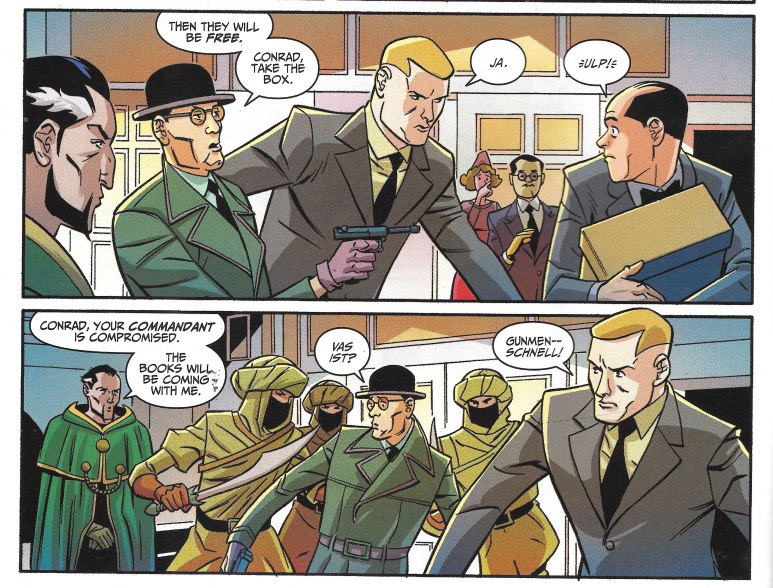 As Ra's men appear suddenly Wayne Manor is crawling with Nazi soliders too, in full uniform. I…don't…know…how that happens, but we are going to go with it because (shrug) why not? 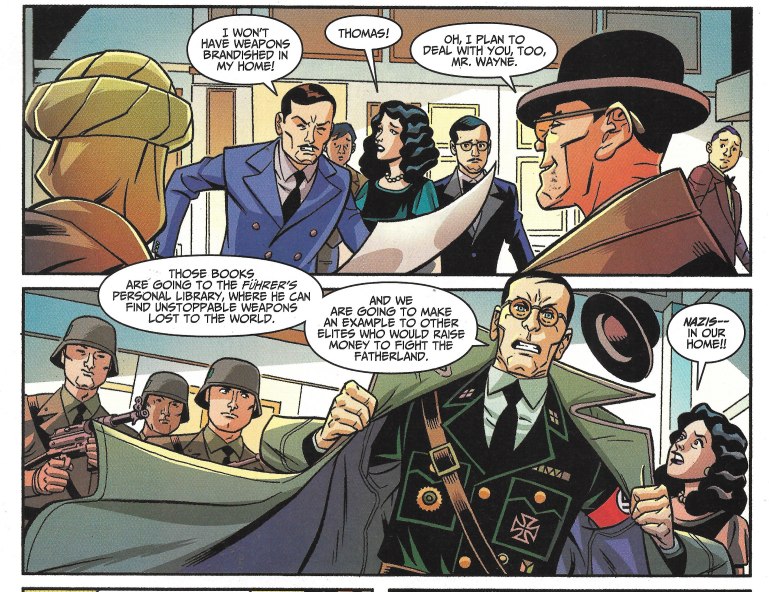 Now don't get me wrong, all of this is REALLY interesting and fun. A pre-teen Bruce fighting Nazis and killer assassins side-by-side with Talia sounds like a great story idea. I just expected a different book based upon the cover. Should NOT have judged the insides by the wrapper as they say, I suppose. 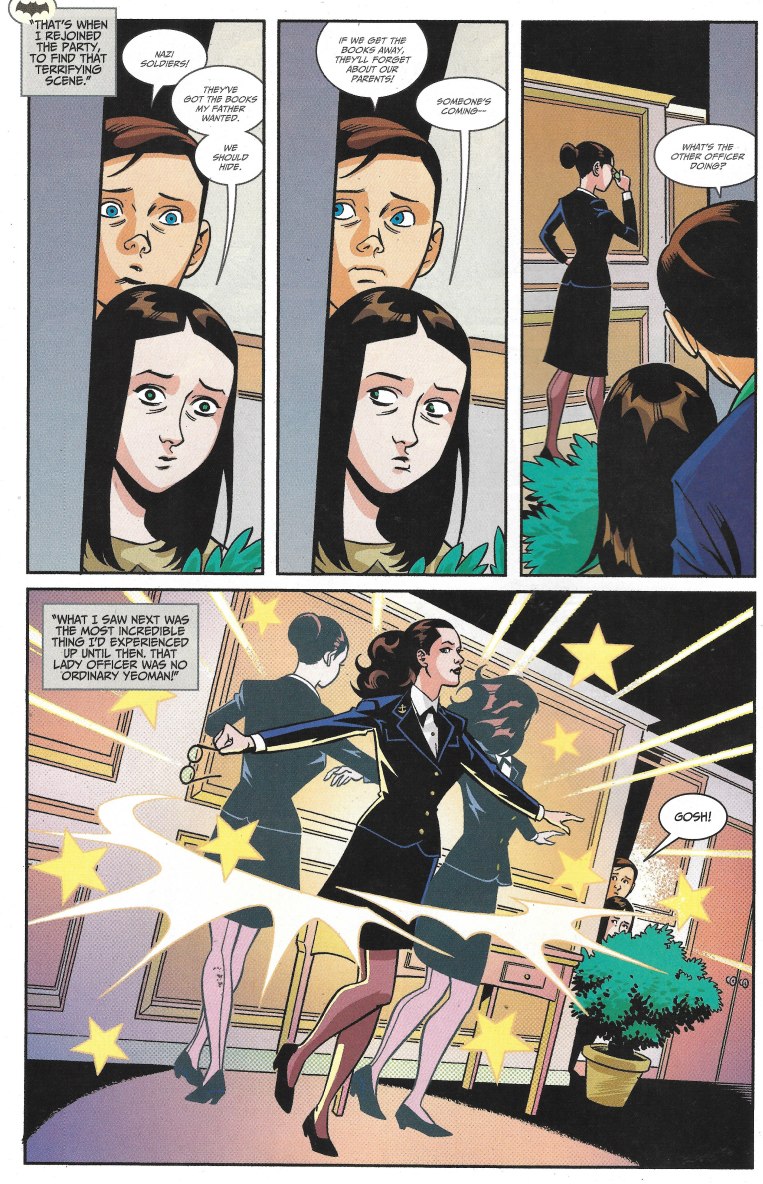 With the danger now out in plain sight, Diana sneaks off to "change", a transformation that is witnessed by the pair of Bruce and Talia. 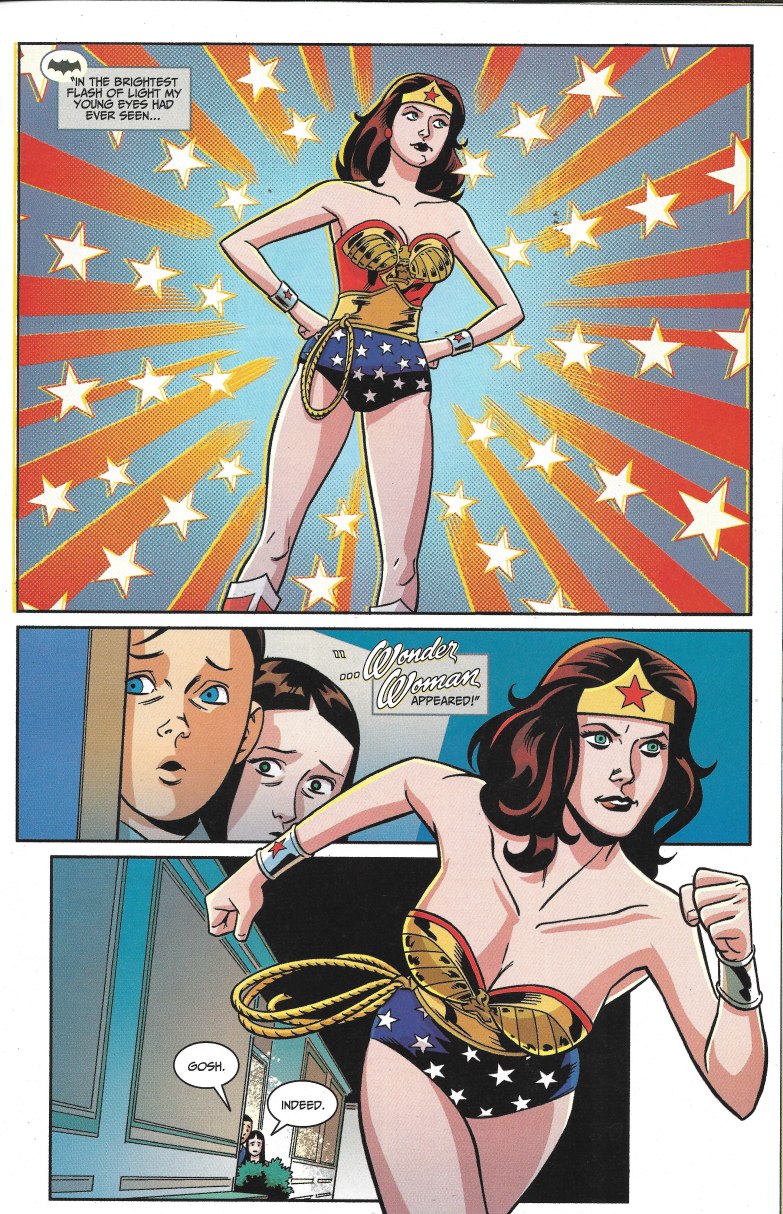 And while the twirl is done justice, the resulting images of Wonder Woman are SO not Lynda Carter. Just …NO! The artist team did not put enough effort in capturing how beautiful the true Wonder Woman '77 was and how much she smiled. This is a poor stand in. There is another Wonder Woman '77 book coming up with a MUCH better rendering. 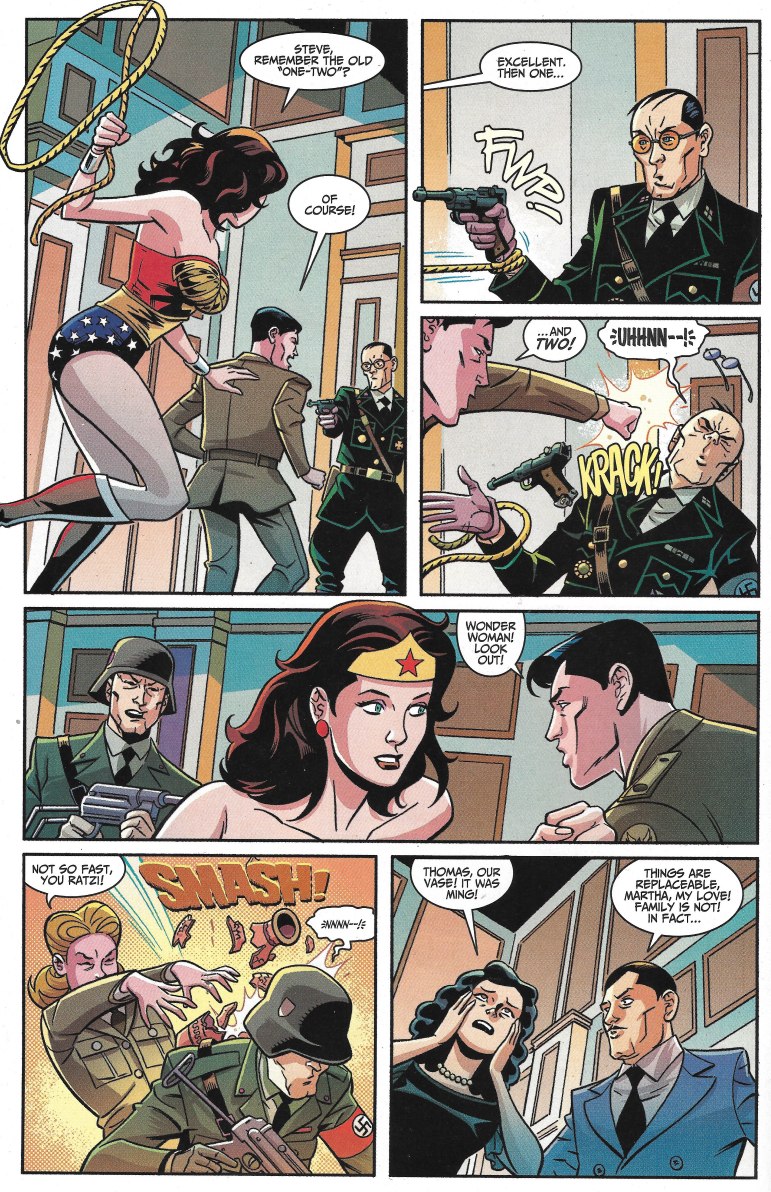 We get some lasso tossing and Nazi punching in as a way of the book trying to apologize for not knowing how to give us a great looking Wonder Woman. Mostly I accept that apology because punching Nazi's is pretty much America's favorite pastime. 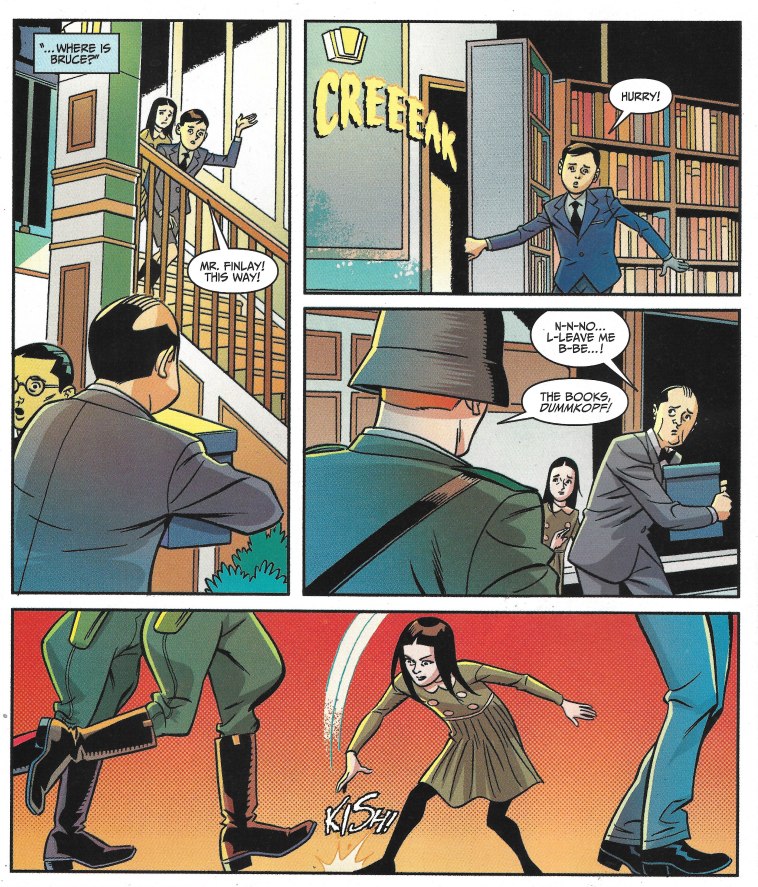 Meanwhile, boy Bruce and Talia are helping Mr. Finlay escape with his books. Interesting that Talia carries around gas grenades but also kind of cool in a "she was doing that way before Bruce" kind of knowledge. 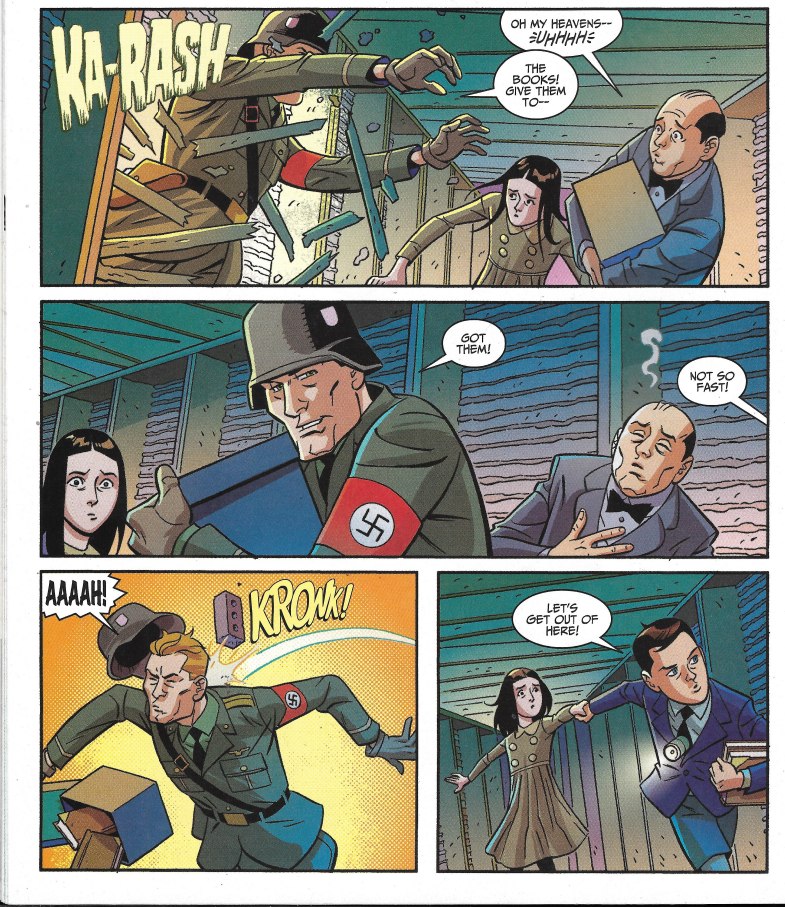 The Nazis are persistent, leading to Bruce ending up carrying the books, leading Talia through Wayne Manor's secret passages to an unknown destination.

Meanwhile, Wonder Woman has the rest of the Nazi's captured but the odd alliance with Ra's League of Shadow sand ninjas comes to an abrupt end with the German's capture. Wonder Woman asks them to stay while she goes after the kids (and the books, of course). 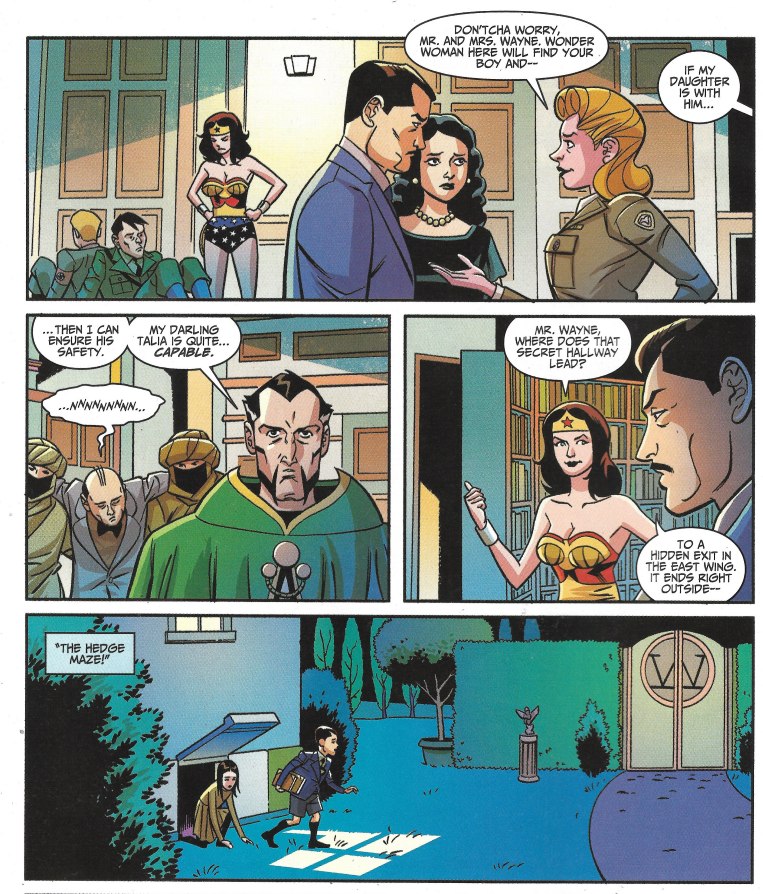 Bruce, meanwhile, heads into the hedge maze to lose any remaining pursuers.

Ra's has gotten miffed at being told to stay with the other guests, and he takes his personal Shadow guard and heads off to find his daughter (and the books), while Wonder Woman and Steve Trevor do the same. 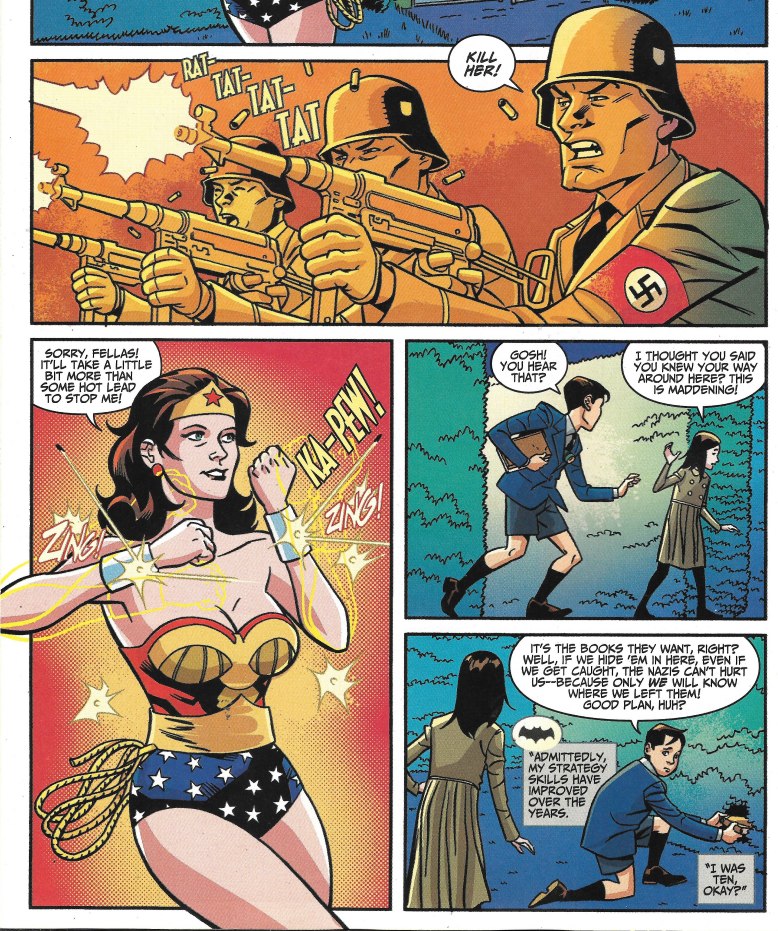 Luckily Diana is the first to encounter this Nazi firing squad, giving her a bullets vs bracelets scene. Just not the same without her smile though.

The children hide the books upon hearing the shots, so now they are lost in the hedge maze somewhere. Good job, kids. No one will ever find them there. I mean that literally. 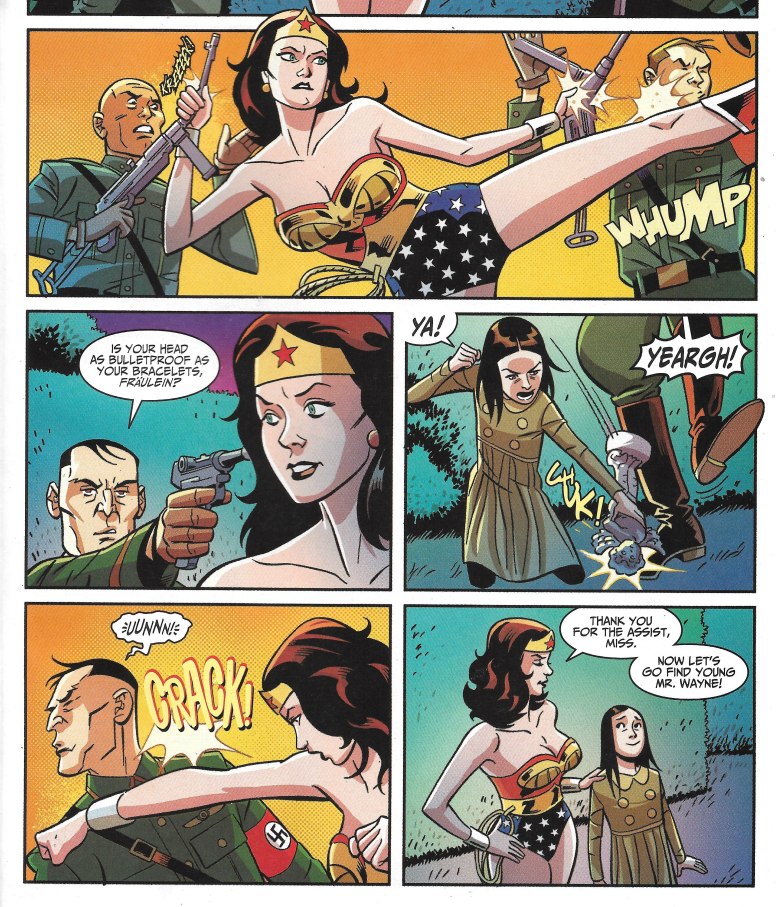 And as if the panels of Wonder Woman had been looking too good for someone, we get this uncomfortable set of facial contortions as she leaps into the center of the maze to help Bruce and Talia.

She only finds Talia as Bruce appears to be…otherwise engaged… Sad. This book tells a decent story, but I'm still heartbroken over what might have been. The series itself is on slow burn, and I show that future issues DID give me the meeting I was so hoping to find in this issue. Number one just promised too much on the cover.

Is the story enjoyable? Yes, very much so. And the art is passable for much of this. I know it is a vain hope that the artist will capture all of Lynda Carter's true beauty on the page, especially given the style of the art being more art nouveau animated than realistic. However, if you are giving me the live action versions of my heroes, you need to meet a higher bar.

You owe it to my childhood and Ms. Carter.

Oh, and next time throw in a George Reeves Superman, will ya?

Posted by SonOfCthulhu at 4:22 AM