Some random Wonder Woman books, Part 6
Back to the beginning 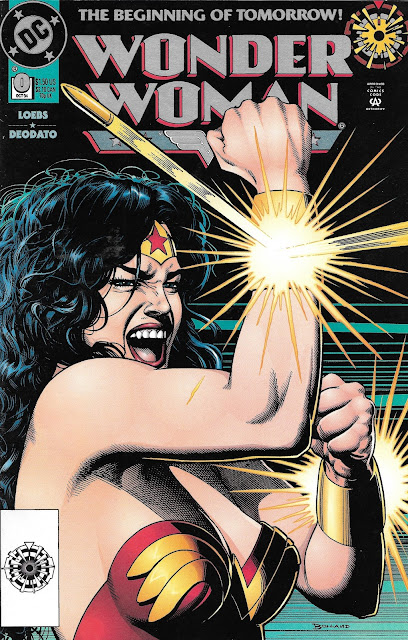 Here we are nearly 30 issues later wondering what the heck happened...

Zero Hour, for one thing. This is the "zero" issue, an issue meant to relaunch interest in titles of all the books after the Zero Hour event wrapped up. This was the "Beginning of Tomorrow" for Wonder Woman…featuring the same creative team as the issue before it (issue #90) and being part two of a story arc started in that prior issue.

This is the creative team that had the book after Perez. Two individuals I generally have a bunch of respect for. However, during this run both of them will come up short at various points. This is late into their association, and Deodato had just jumped back on as penciler.

DC calls this arc "The Contest" when traded and it concerns the fact that Hippolyta, Diana's mother, saw a vision of Wonder Woman dying while Paradise Island is in a demon dimension (yeah, I have lots of missing issues to fill in for here) and obviously she takes that stuff kind of seriously. So she recalls Wonder Woman back home in issue 90 to take part in ANOTHER contest to see if anyone can best her.

The prize? Whomever wins is now Wonder Woman.

At the start of this Diana finds herself with only normal Amazon strength, which is still better than human, but makes her vulnerable. Also there are some new "additions" to the island that will make the competition a bit more interesting. More on them later.

First we have to deal with Deodato's art, which in this comic is STELLAR for the most part. He clearly likes Rob Liefeld's work and takes after him when it comes to pose and panel layouts. However Deodato is a much better artist, only sometimes losing his sense of proportion. This issue works as a story only because of Deodato's art as it is much too decompressed for much of anything to happen.

The issues I have following this one will see some problems develop in both art and story, but for now we are buckled in for the ride so let's get this one started. 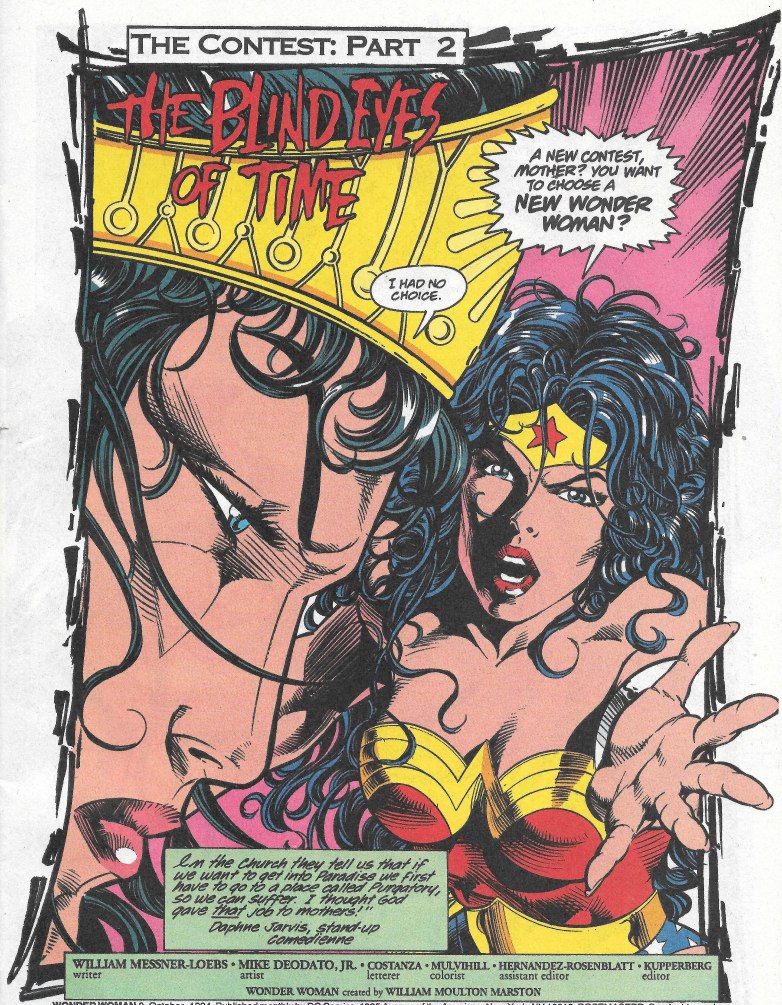 Here we have Diana passionately appealing to her mother. Note that little something Messner-Loebs does in most of his books. That quote from some reading he did. Don't get distracted by them. What you can get distracted by is all those curls and curves on Diana.

Hippolyta uses the excuse that Diana shouldn't use physical force to win her battles in Patriarch's World, which might hold some weight if the contest she is having to choose her successor wasn't based on physical stamina, endurance and strength. I don't recall the contest having a "wright out this essay on proper diplomacy" part. 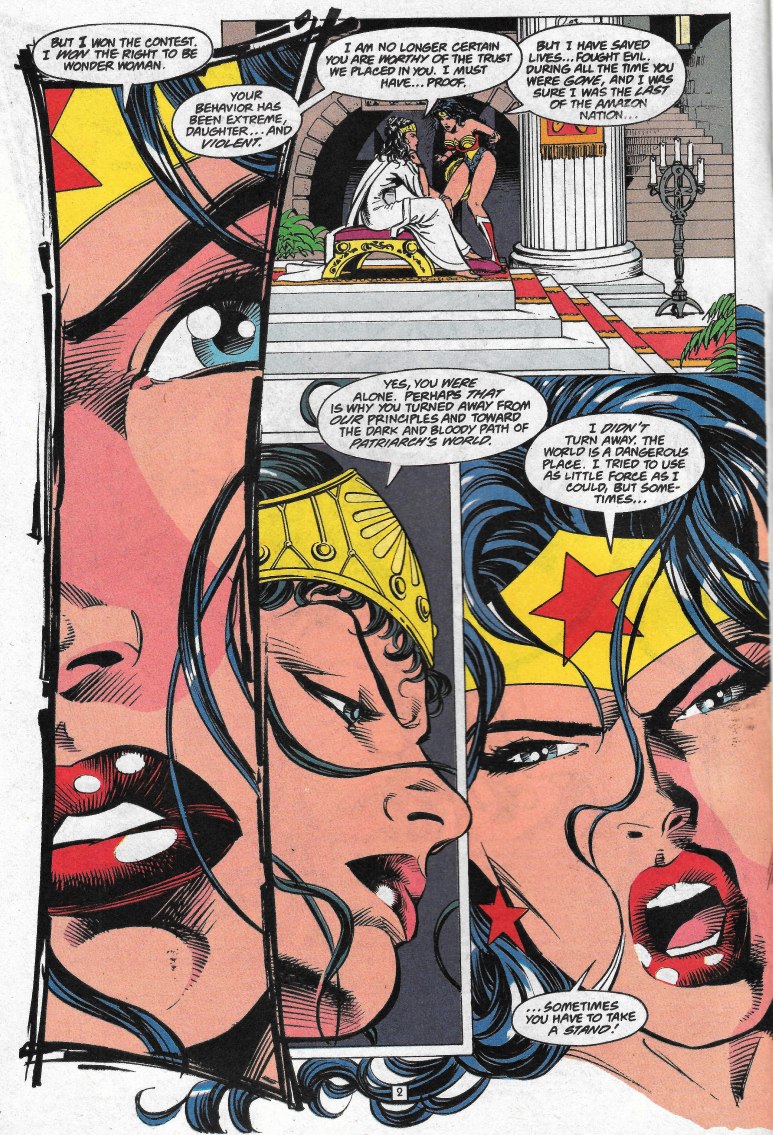 Notice how good Deodato does lips and faces. I am astounded by the emotion and beauty he can evoke in these panels.

Her mother admonishes Diana and tell her the contest WILL go on as scheduled. Diana is stripped of her costume, but retains the dignity and trust of the people who in Patriarch's World she has saved. She uses this as point of argument with her mother, for all the good it does.

When next we see Diana, she has resorted to borrowing a gown from her bubble-headed Amazon sister Mala. I say that not because Mala is a blonde, but because she says some pretty insulting things on accident. Watch her make a oopsie when describing how excited she is about the upcoming contest: 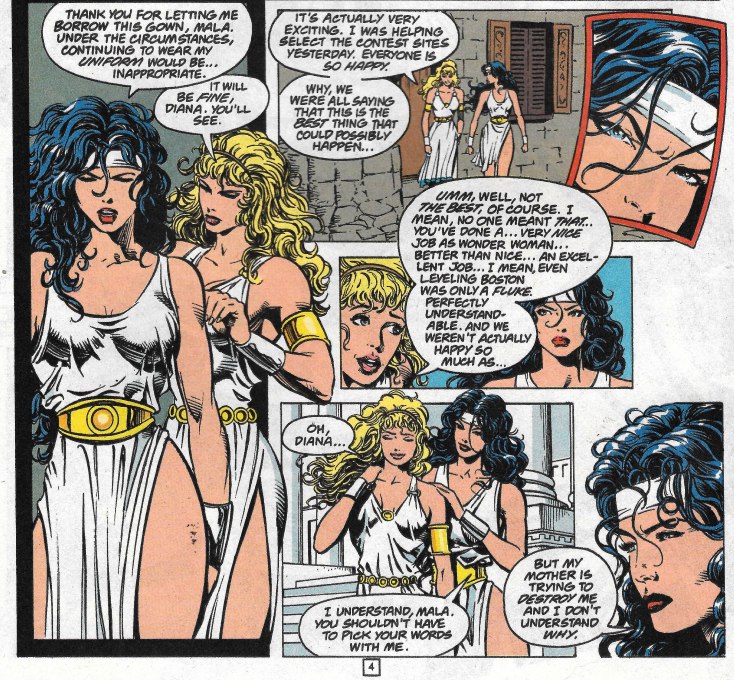 While walking the compound they get rooked into helping setup some poles for the current contest, which allows Messner-Loebs to drive back into Wonder Woman's origin for just a bit. 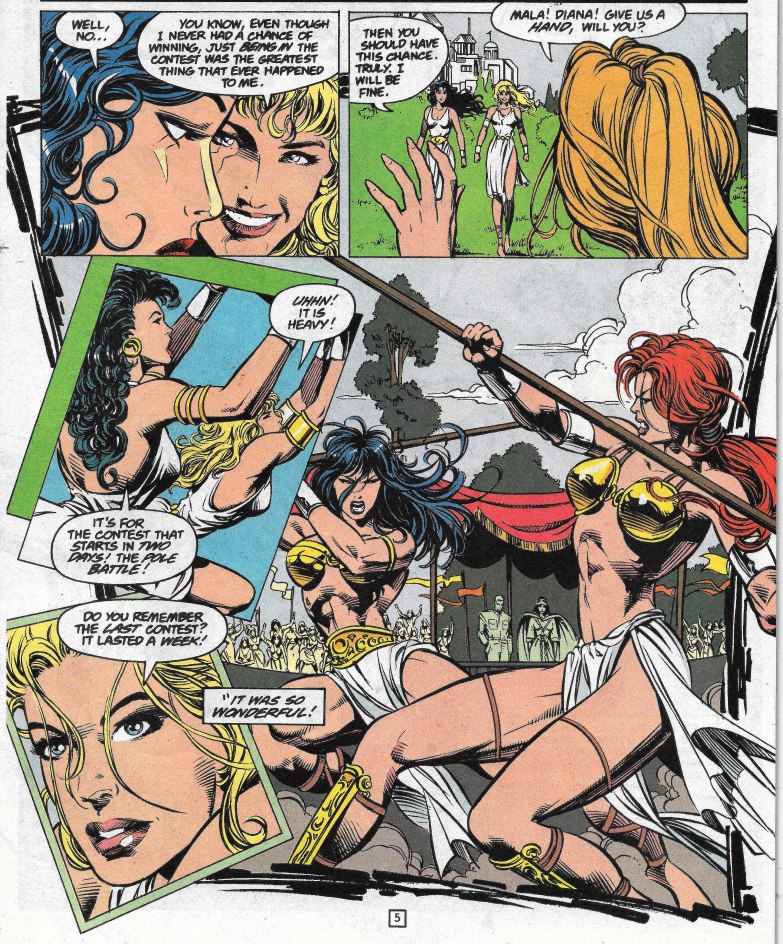 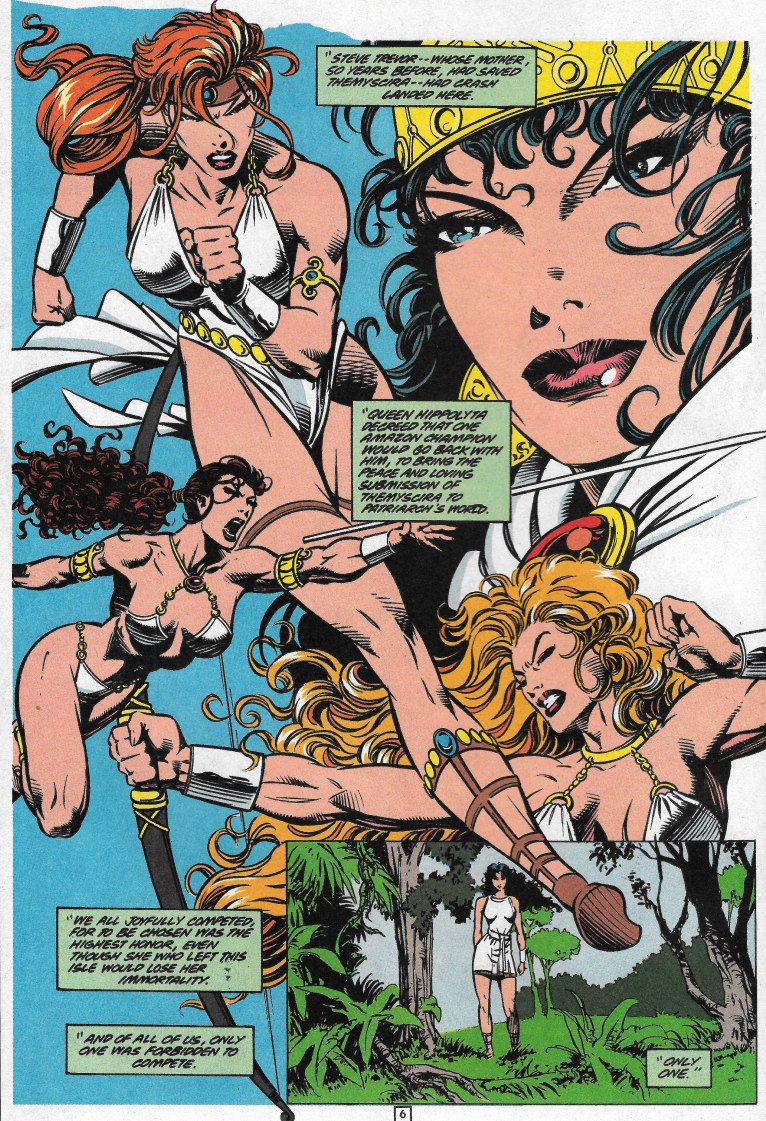 Deodato's pencils don't allow for much cropping, so we get the entire story of how Hippolyta forbid Diana from competing in the contest in one giant page size panel which is a little busy and points out Deodato's one major flaw. The running woman with the ginger hair shows a leg fully extended. And that leg looks to be two-thirds the size of the woman herself. I hate to point out flaws, but that glaring issue will come back again and again with his art. 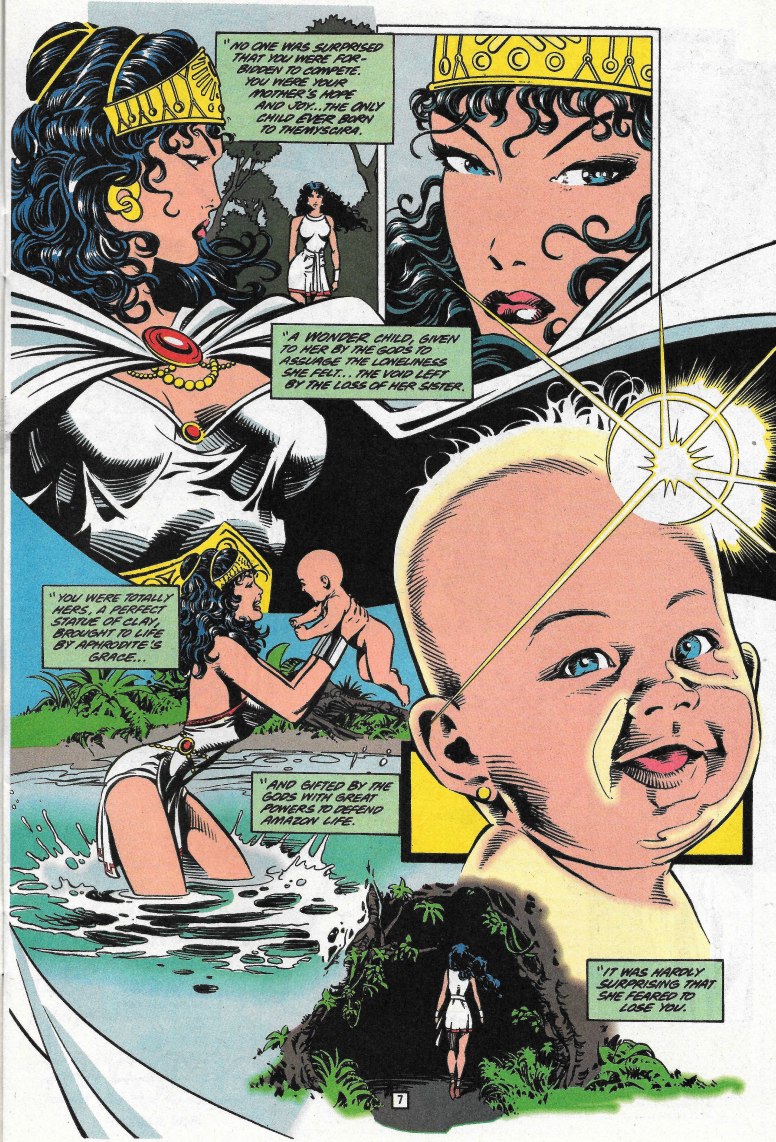 Then the history of how Diana was created comes out in the following page with some baby whose head has gotten thirty coats of Turtle Wax. Seriously, someone put a hat on that kid before she blinds someone. 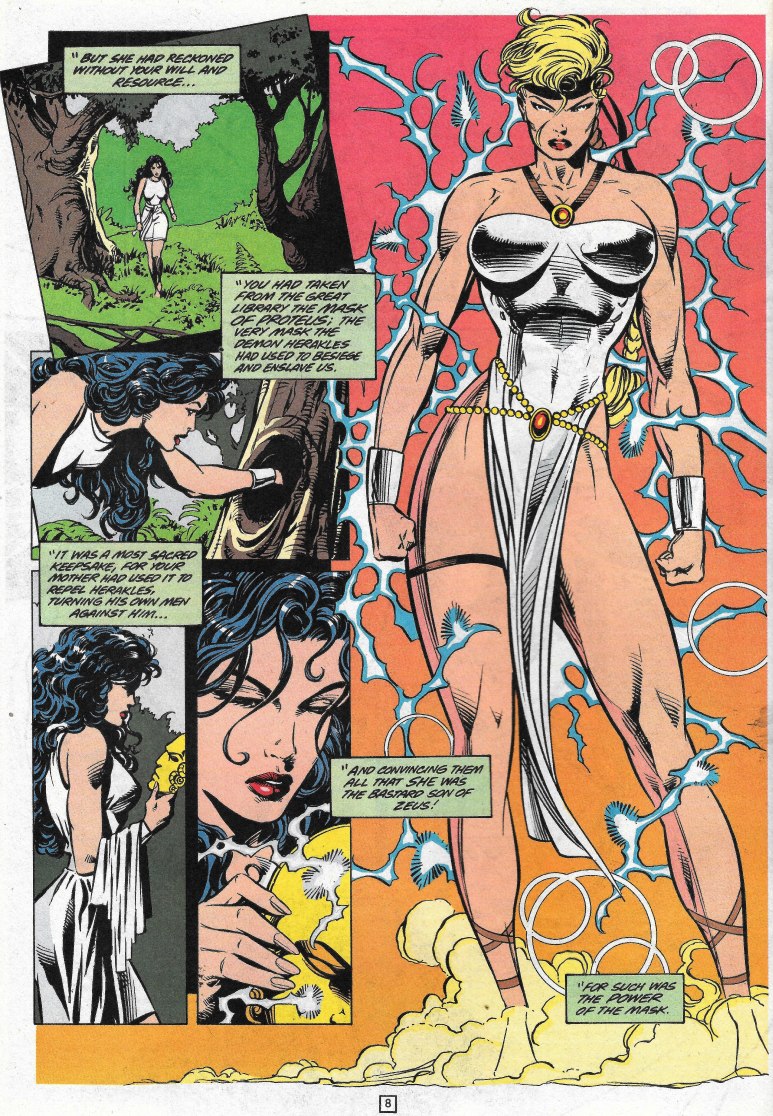 Diana felt she must compete, so she doned the magic mask that makes her look like a blonde. Note the feet here, obscured in clouds. The entire thing makes me think Liefeld, but I have no proof that's what Brazilian artist Deodato is going for. As for the leg length in this shot, it is kind of a near thing, but I'll allow it this time.

Of course Diana passes all the tests even the one where her Mother pulls out Diana Trevor's pistol and fires off a few shots at her. Only then, after being declared winner, does Diana reveal herself. 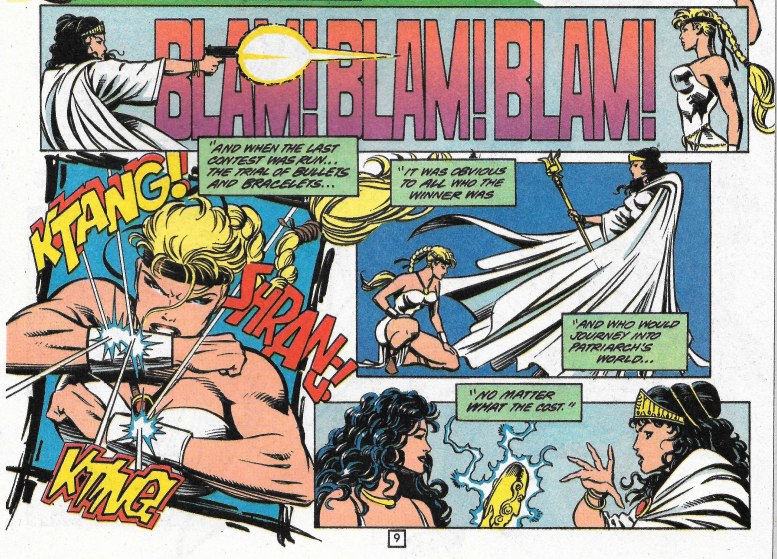 It is then in the present that another Amazon by the name of Artemis makes her appearance known. Artemis is one of a tribe of Amazons that sprang from her Mother's sister. Hippolyta and her sister Antiope had a falling out…decades? centuries?...well, some time ago due to difference of opinion. Antiope and her tribe were not immortal, but raised Amazons just the same. Artemis is part of the survivors of this lost tribe, homeless since the god Hermes destroyed their city of Bana-Mighdall. Diana had some involvement in that too, so if you sense some resentment here, it is possibly warranted. 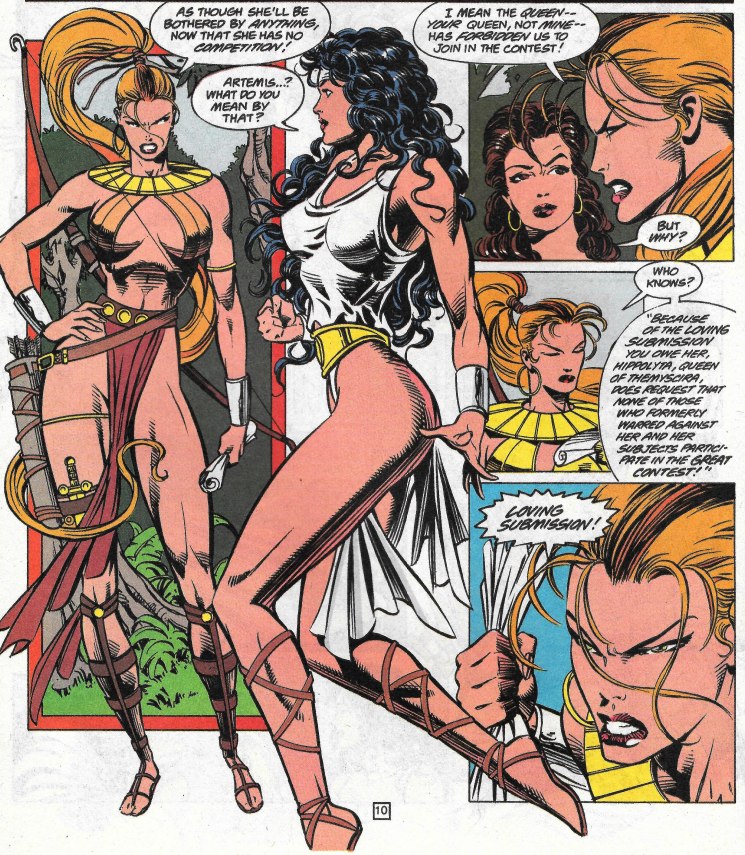 So Artemis is clearly mad at not getting to try out, feeling she can best Diana. While the tribe of Bana-Mighdall are acting like isolationist jerk-holes, you can't say it is completely without cause as they are not allowed to play in any Amazon games. Quite literally! We need a foggy Christmas Eve and Queen Hippolyta to come beg Artemis to be her Wonder Woman…or maybe I'm mixing this up with a Christmas Song.

Diana isn't standing for this stand-offishness, though. She rushes after Artemis determined to make things right with her. Artemis leads her to the camp the Banana-Mighdallians are living in, and it is very harsh and primitive. 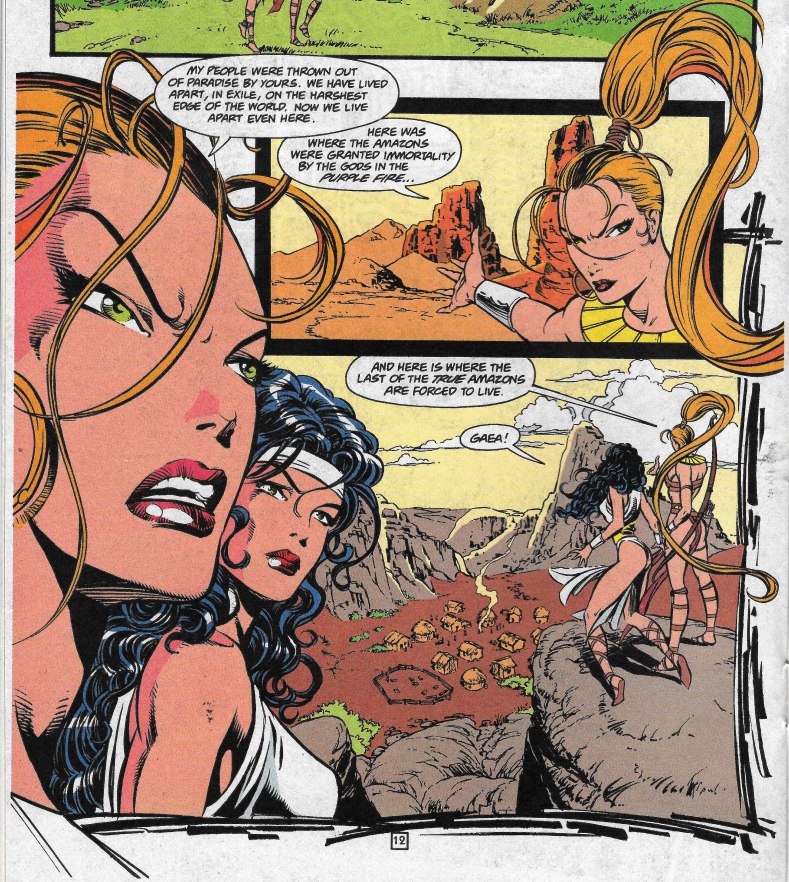 Once they travel into the village, Diana's face causes a strange reaction in one of the locals. This raises questions Diana wants answered. 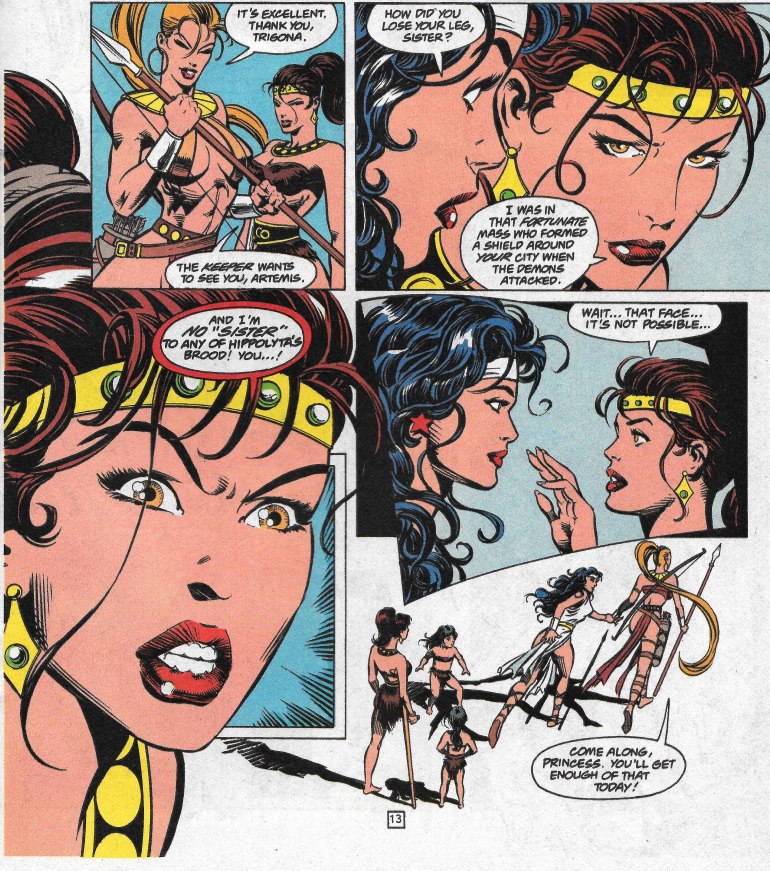 Artemis plays it off that it is Diana's great beauty, but we all know something is up. Especially when she ends up leading her to Mala, the tribe's blind elder and Mala face feels her. After that, she has to drag her to the hut where they honor their most revered ancestor, Antiope. 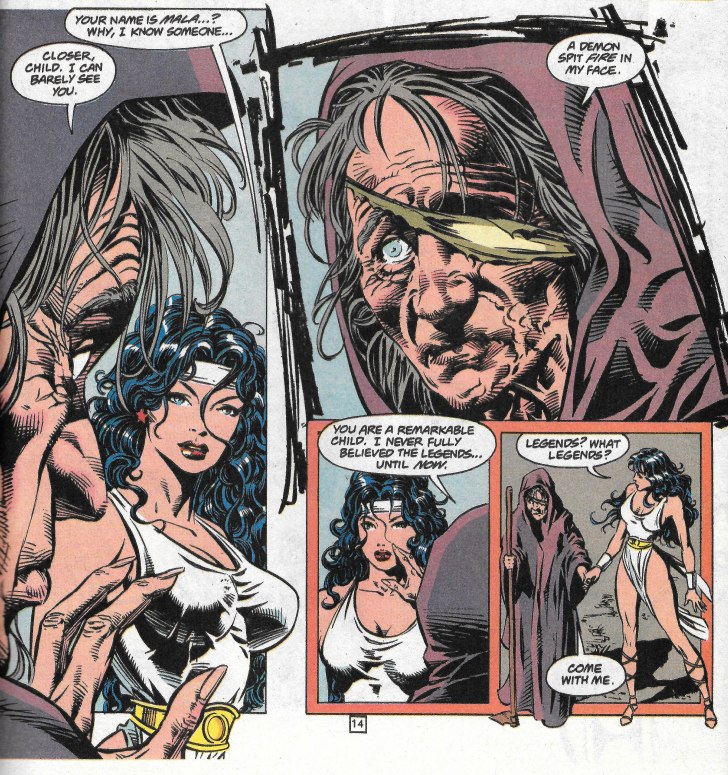 And much to Diana's surprise, the bust she finds there of Antiope exhibits the same facial features as her own. 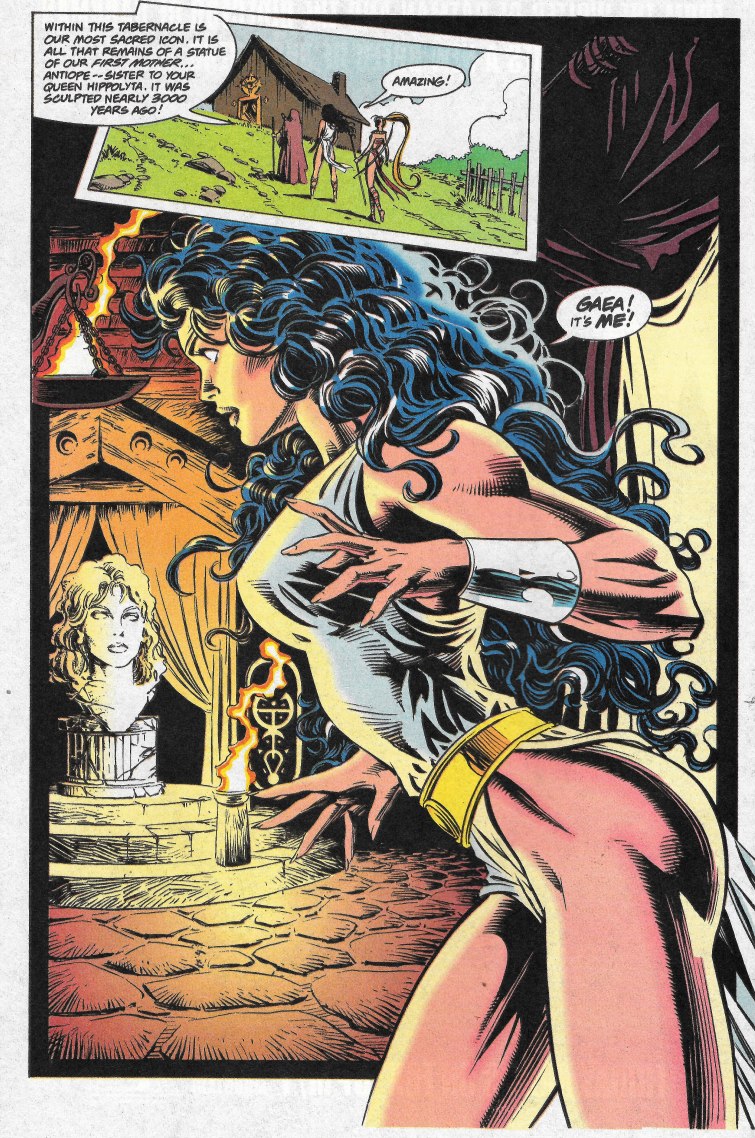 Without warning, a bright flash envelopes Diana. Next thing we know, we have been transported until just before the Herakles and his band of Argonauts betrayed the Amazons with promises of love.

Seems the band from our mythological tales needed the girdles of strength the Amazons possessed and used duplicity to trick them into disclosing their whereabouts. Hippolyta exacted a promise from Herakles of marriage, which is all part of the Argonauts game. 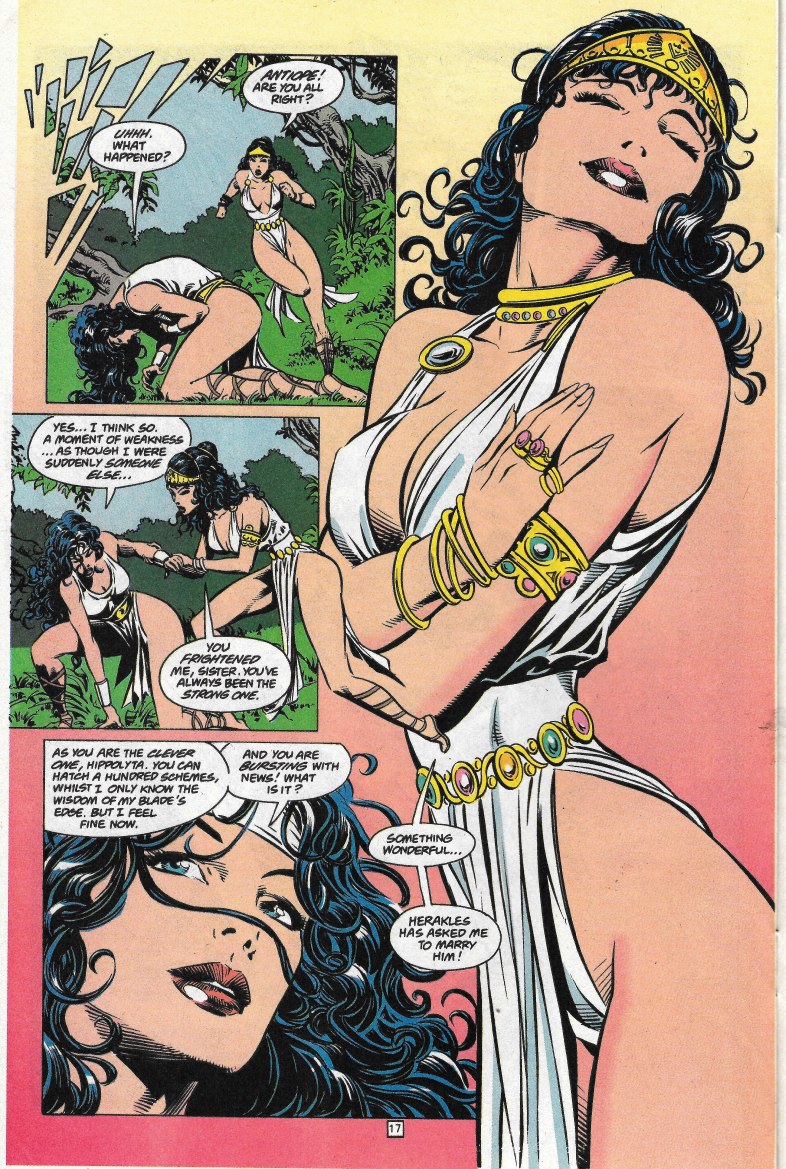 Amazing panels up there.

Antiope is skeptical of Herakles' motives, especially in light of Hippolyte's blind faith. 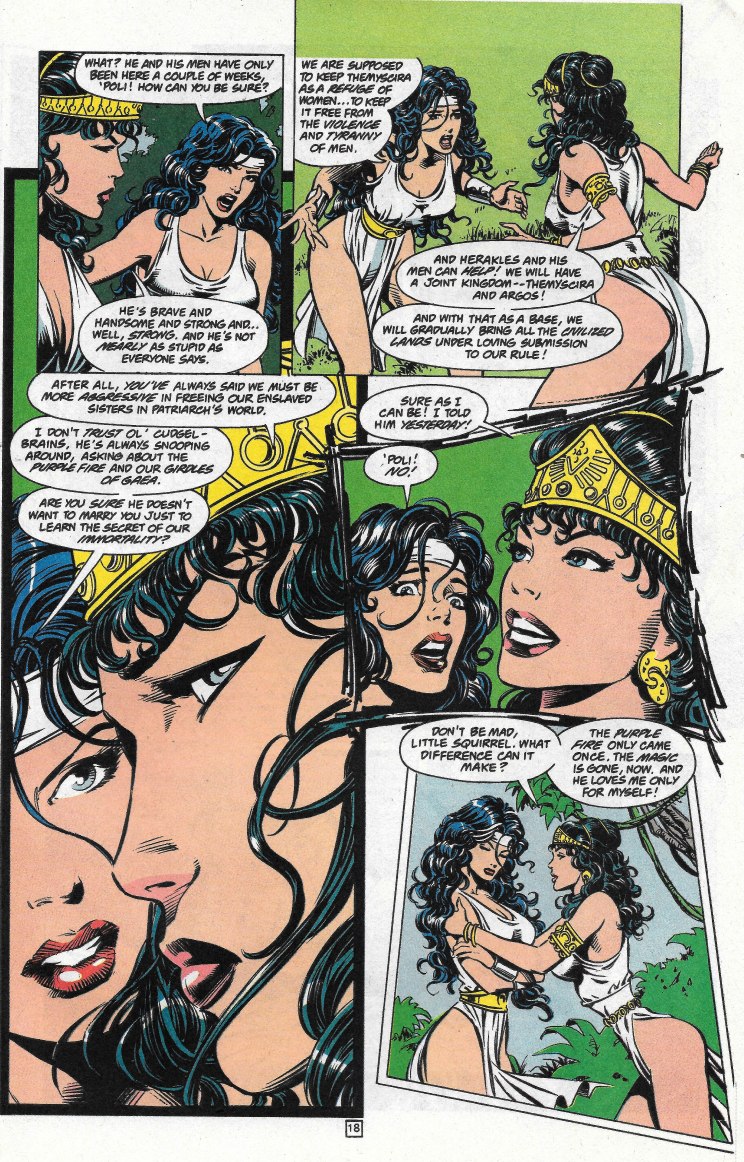 Unfortunately, all the Amazons must be wed for the pact between the two groups to be made binding. Antiope is wed to Herakles' man Hylas. Their wedding night goes the way that most of the Amazon's. 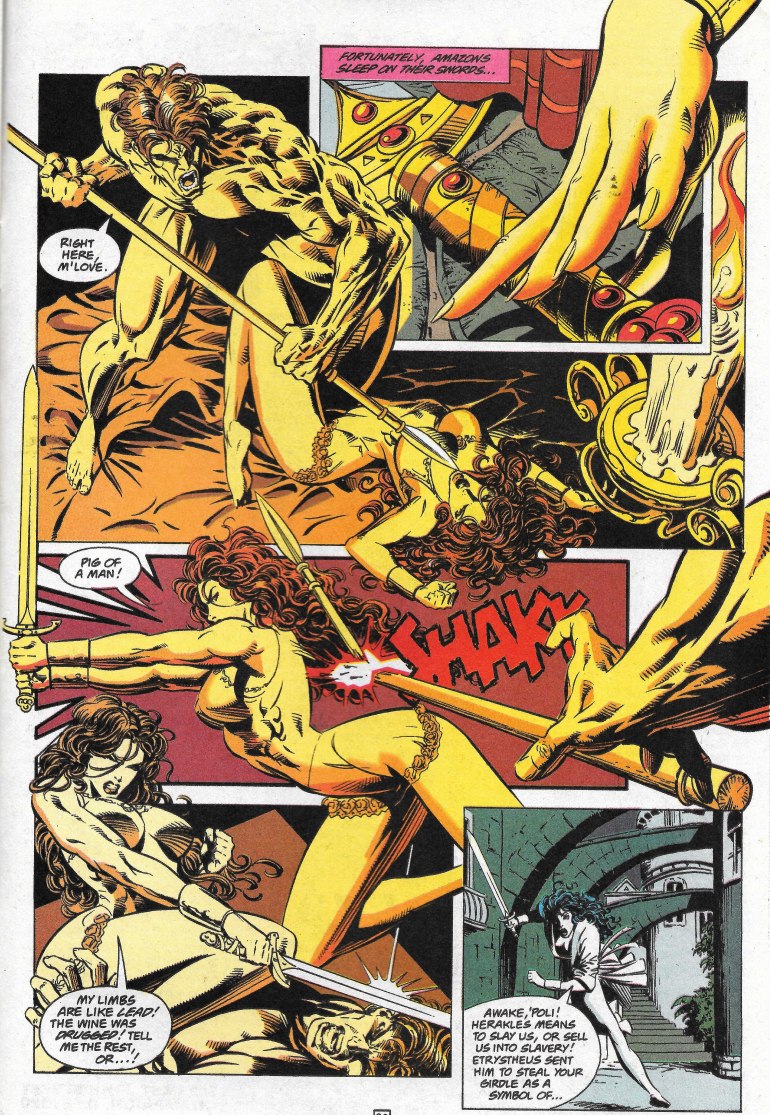 Off to a rocky start, I see. Antiope races to her sister's house to make certain Herakles has done her no harm… 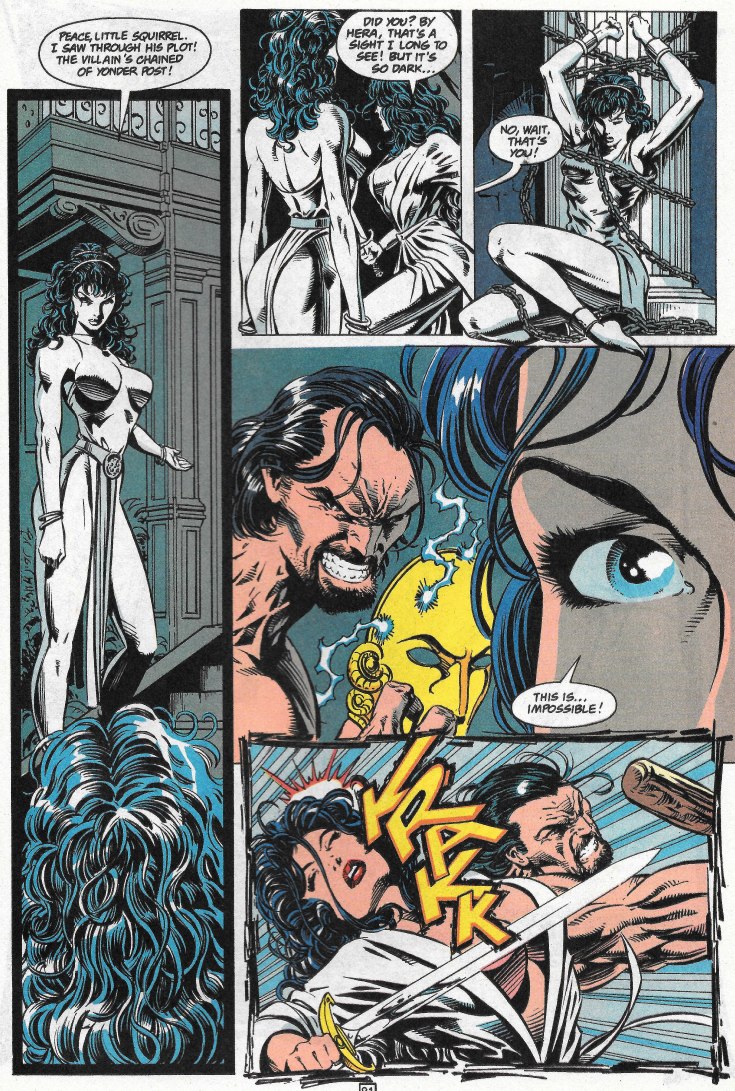 And gets cold-cocked for her efforts. Appears that Diana isn't the first to use the Mask of Proteus nor was Hippolyta. And with that we jump back to the present, where stands Artemis and Mala perched over the prone body of Diana with concerned looks on their faces. Mala pleads with Artemis to get help, as Diana does not appear to draw breath.

An auspicious restart to the character or a ploy to garner sales? A little of both, perhaps. This isn't the worst reboot of Wonder Woman as it gets many of the things right. She is definitely a member of a sisterhood, even if it looks increasingly like it is a very troubled family. The art is astounding in places, if only they can keep it from going too Liefeld. In all, I wanted to see where this was going, however ask me in a couple more issues if that is still the case or not.