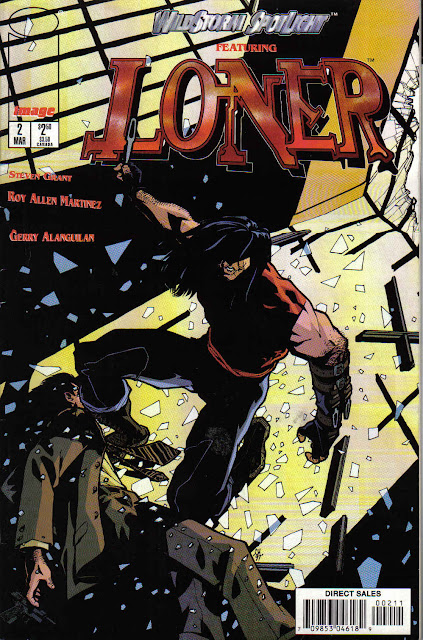 As I read more and more Image books, I have to say that my initial assessment of the company was all wrong. Image’s past is full of dreck titles with stories that went no where, couldn’t meet deadlines, used backup artists instead of the hotshots and became all-around disappointments. But they did put out some enjoyable stuff back then too.

Case in point: Steven Grant’s Loner three-issue mini. Grant is best known for his run on the first Punisher mini way back in the 80’s along with stints on Hulk and Avengers. I’m going to plead ignorance to knowledge of the Wildstorm universe. I’ve read The Authority: Relentless, but beyond that I’ve no idea who’s who in this section of comic book reality and I have no idea how the Loner character fits in it. What I can tell you is that Grant does a great job of plotting and writing this book. Roy Allen Martinez pencils this book. Although he’s no Mike Zeck or Frank Miller, outside of a couple of odd panels, Martinez gets a good visual flow going.

Loner is Rick Vega, a second generation superhero. He’s part acrobat and part knife-fighter. If you want to try and pigeon-hole him, think Daredevil with sharper weapons. Rick’s Dad was the original Loner, but he’s been out of the superhero game for over twenty years. Now spending most of his time at the bottom of a bottle, Ray Vega taught his son all he knows about fighting. Rick’s become Loner on the sly, trying to tie up his Father’s unfinished business without his knowledge. Here’s Rick as Loner saving the life of a news reporter who’s just been thrown off a building by a corrupt police officer. 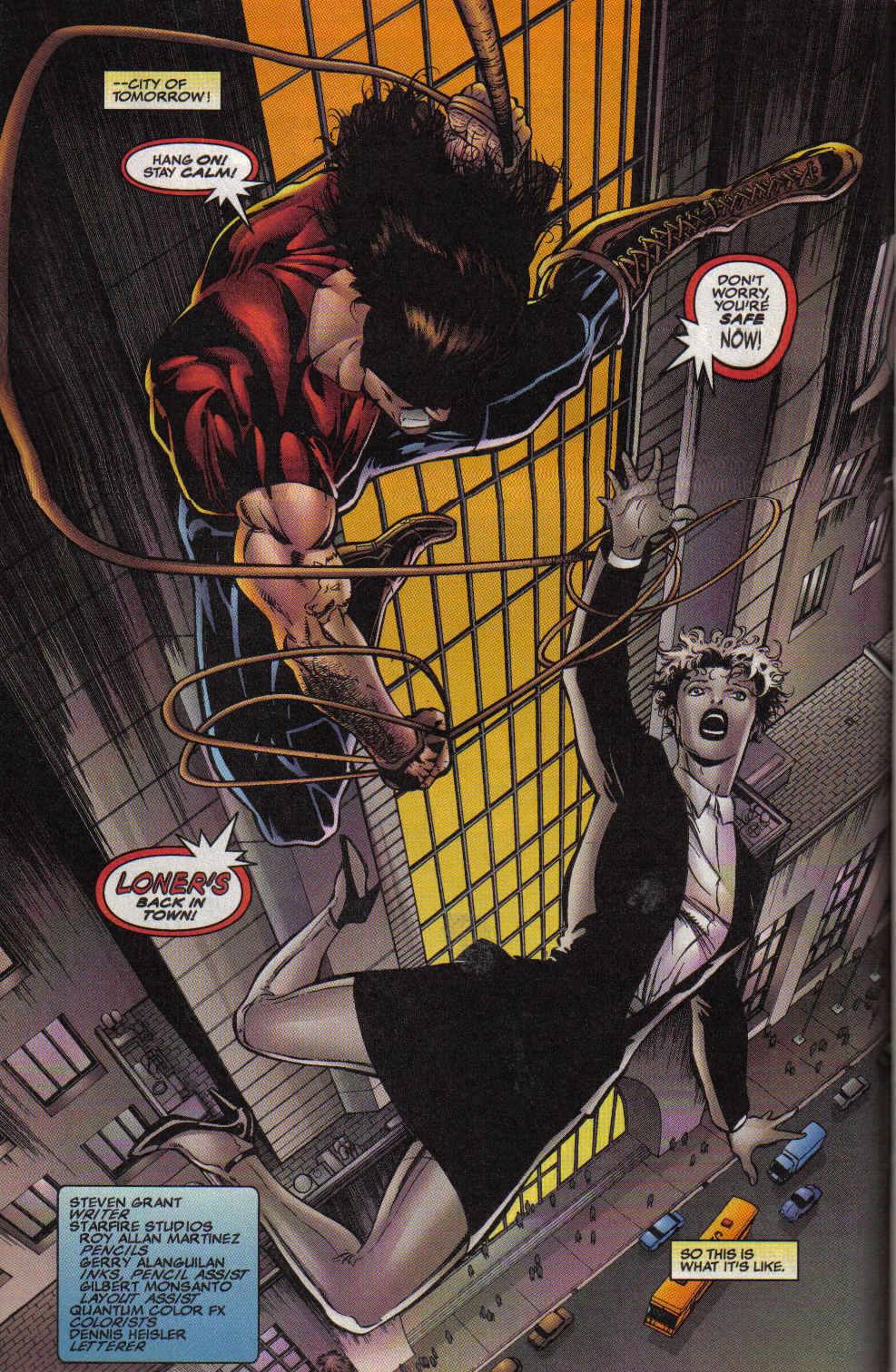 That’s a nice intro for a character. He’s heroic and flashy in a Nightwing way. And there isn’t any useless posturing or huge guns in sight. While saving the young lady, Loner wonders how his Dad could have given this up. After she’s safe he goes after the cop. He bloodies the guy’s nose, knifes him when he goes for his side arm, and then after knocking him off the roof…well you tell me what he does here: 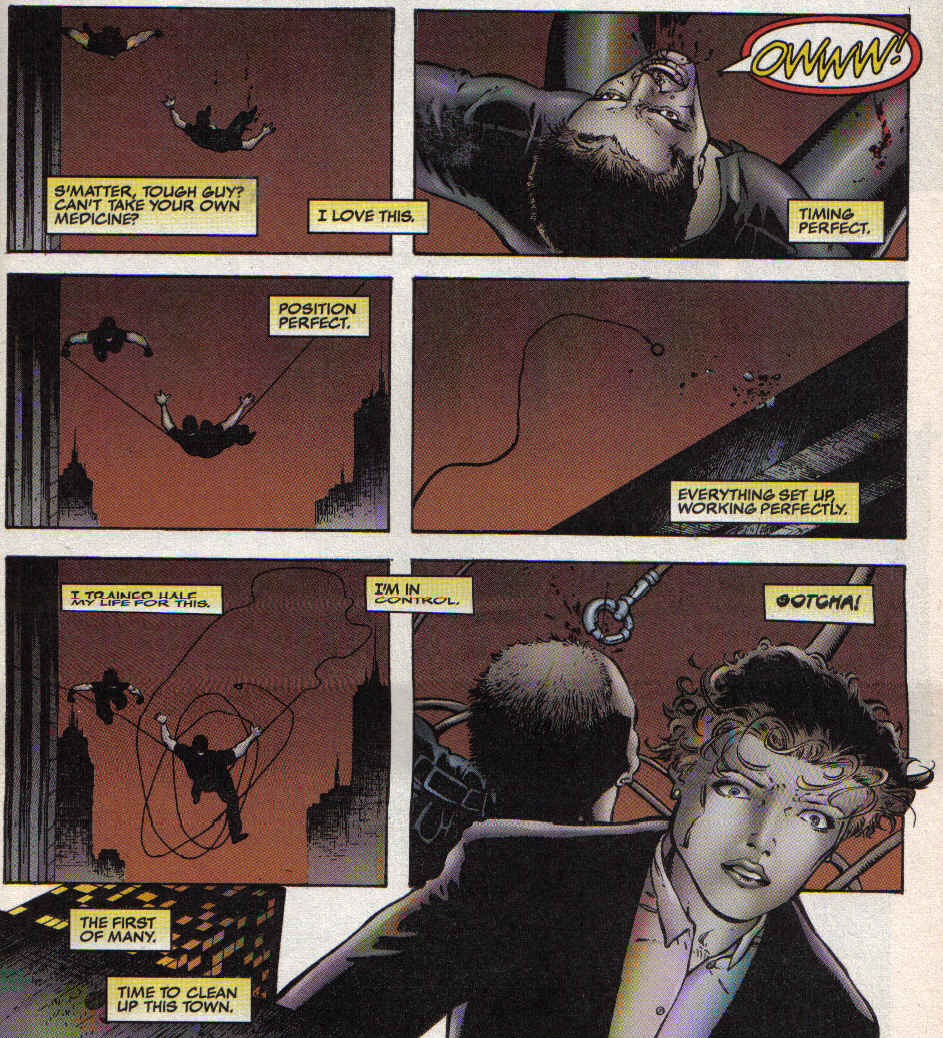 Pay no attention to the woman in the lower right corner, as you can tell, she’s in another panel below these. I can’t make up my mind what exactly happens here. The cop falls off the roof, that much is very clear. Next something odd occurs. My first guess is that Loner throws out a grappling rope which goes around the cops body and then curves back up to a roof top. That is an impossible throw so I discount it. Maybe the cop hits a guy-wire which breaks free from its mooring and then wraps itself around him four times before the mooring anchor taps him on the noggin…not really plausible there. Ok, someone else figure this out for me and let me know. Short end of it is Loner catches bad cop while reporter looks on.

This is the artist’s one flub on the book. Most of the time he’s dead-on with projecting action scenes and character moments. So one little mistake shouldn’t mean we kick him over. (But Loner is holding one end of the wire in the third panel, and in the fifth panel he’s floating in mid-air. That can’t be since he can’t fly. Panel three Loner is definitely holding the end of the wire and then in panel five it’s in front of him. AAAAARRRGH! It MAKES NO FLIPPING SENSE!) *ahem* Sorry. The art here is fine. Really.

Now that Loner has the bad cop tied all up, what does he do? Why head for the nearest meeting between the dirty Mayor and the evil gang lords. Pay special attention to boss Molinari and his lead henchman Barrow. 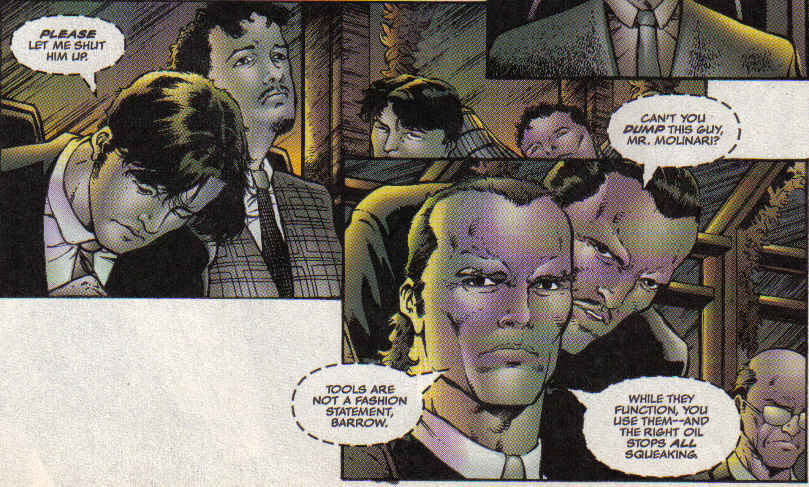 So the mayor is a “tool” that Molinari can oil down and make him stop “squeaking”? Well, there’s certainly no homosexual symbolism in that statement. I don’t change these word balloons at all folks. Really. I guess that little “quip” doesn’t really mean these guys are gay. It’s not like the writer has them singing “It’s Raining Men” or anything. 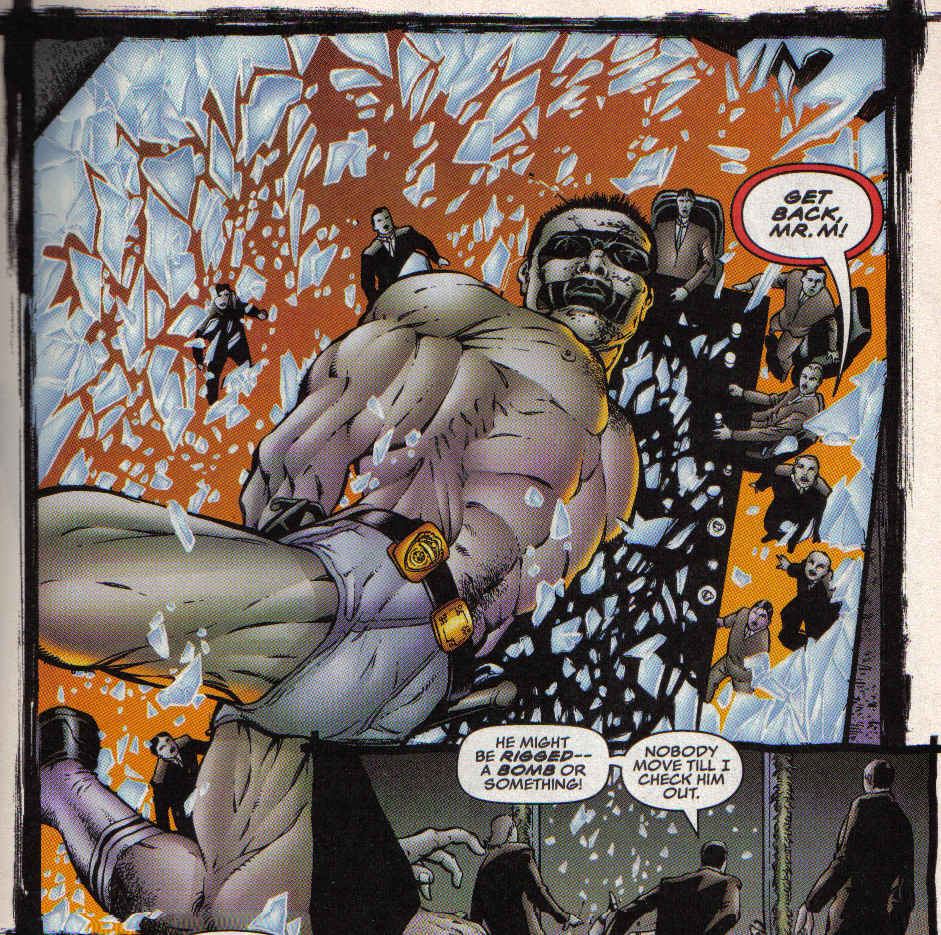 WOAH! It IS raining men though. Let me get this straight: Loner stripped the cop while he was tied up. Why in heaven’s name would he do that? Whatever the reason, I love Barrow’s reaction. “Get back Mr. M. He might be RIGGED, let me do a quick cavity search. Keep back everyone, HE’S MINE!” I’m sure it’s just Barrow’s keen body guard instincts taking over. Or maybe the fact he’s keen on that guard’s body. Not only that, he has a definite idea about what he expects from our trussed up officer. 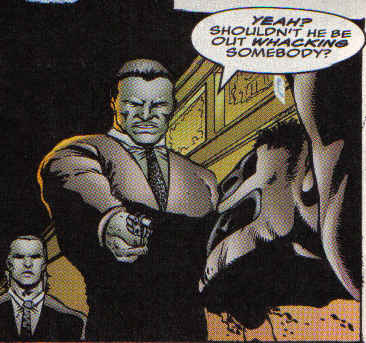 “Wacking somebody”, hmmm. I bet Barrow has just the person in mind, too. The guard has to fess up to Barros that he didn’t complete the hit on boss Molinari’s least favorite investigative reporter. This news pales in comparison to his next exclamation, however. 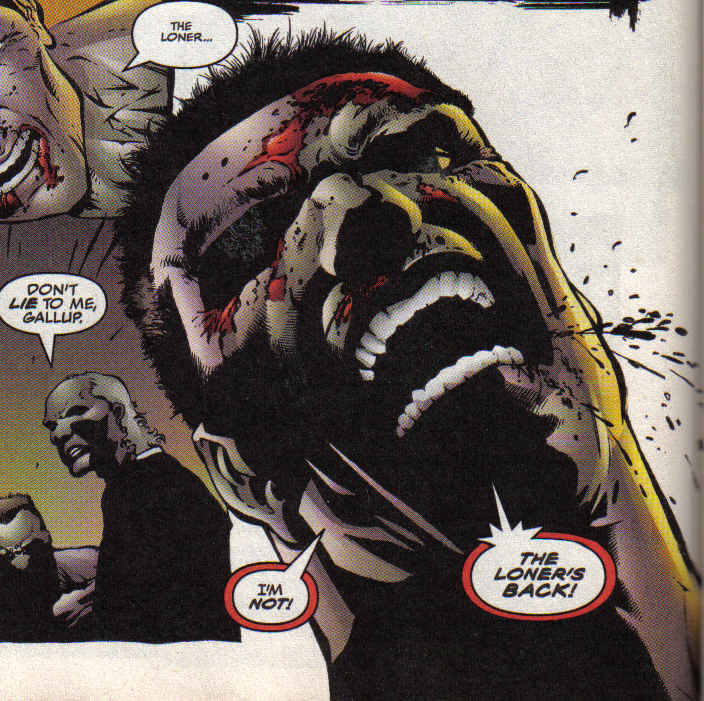 And that panel is followed by this one… 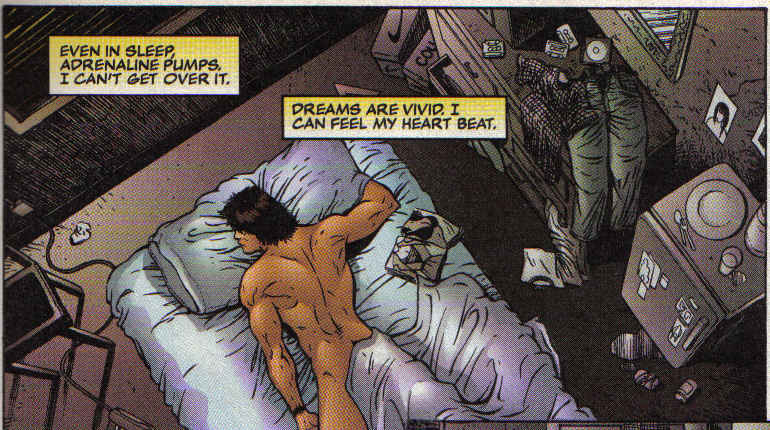 Why yes, that is the Loner’s back. How perceptive of the officer to notice that. Loner takes a call from Molly, his very young step-Mom, who informs him that his dad is on a drinking binge again. Off he goes to get his Dad out of the bars before he decks someone. We check in with lady reporter, Shelly Moran, as she is recovering from her shake up. Just in time, too, for her to learn that the officer that threw her off a building has just died in “the line of duty”. He’s being hailed as a hero but she vows to break her story of his actions anyway.

Meanwhile Rick catches up with his old man, unfortunately it’s after he’s beaten up the entire clientele of a neighborhood bar. Ray tries the same moves on his son when Rick asks him to leave. Rick lays him out and then gets Molly to help him to the car. This is a pretty cool exchange between the upset bartender and our title hero. 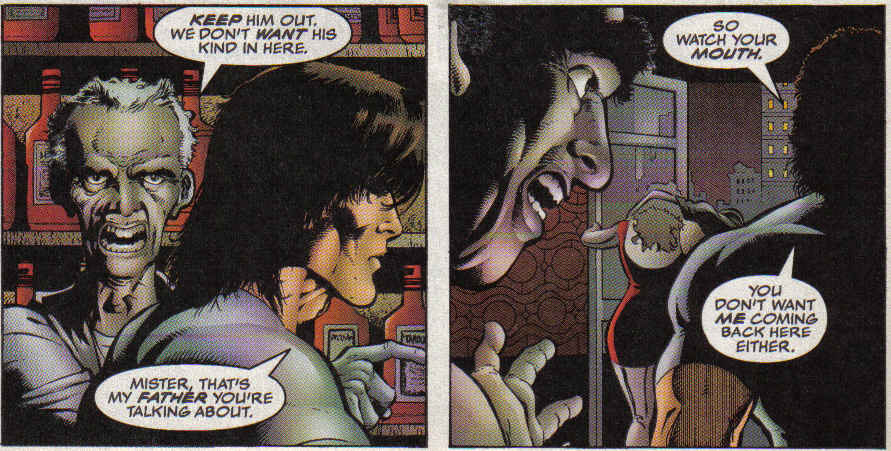 Molly tries to get Rick to open up to her in the car, a conversation he shuts down pretty quickly. Then he explains that his Dad never shared certain parts of his life with Rick. His Dad comes to on the couch at home and the first thing he hears is a newscast about the new Loner, which causes him to tell Rick point blank to get out of town. Rick leaves to stalk the gangsters once again. They seem to be all in a tizzy. What’d Loner do? Pee in his scrambled eggs? What follows is an above-decent three page fight where Loner trashes all of Molinari’s men (including a guy with a samurai sword) and threatens the big guy himself. The L-guy tells Molinari to get out of town or else. A couple of panels just to whet your appetite. 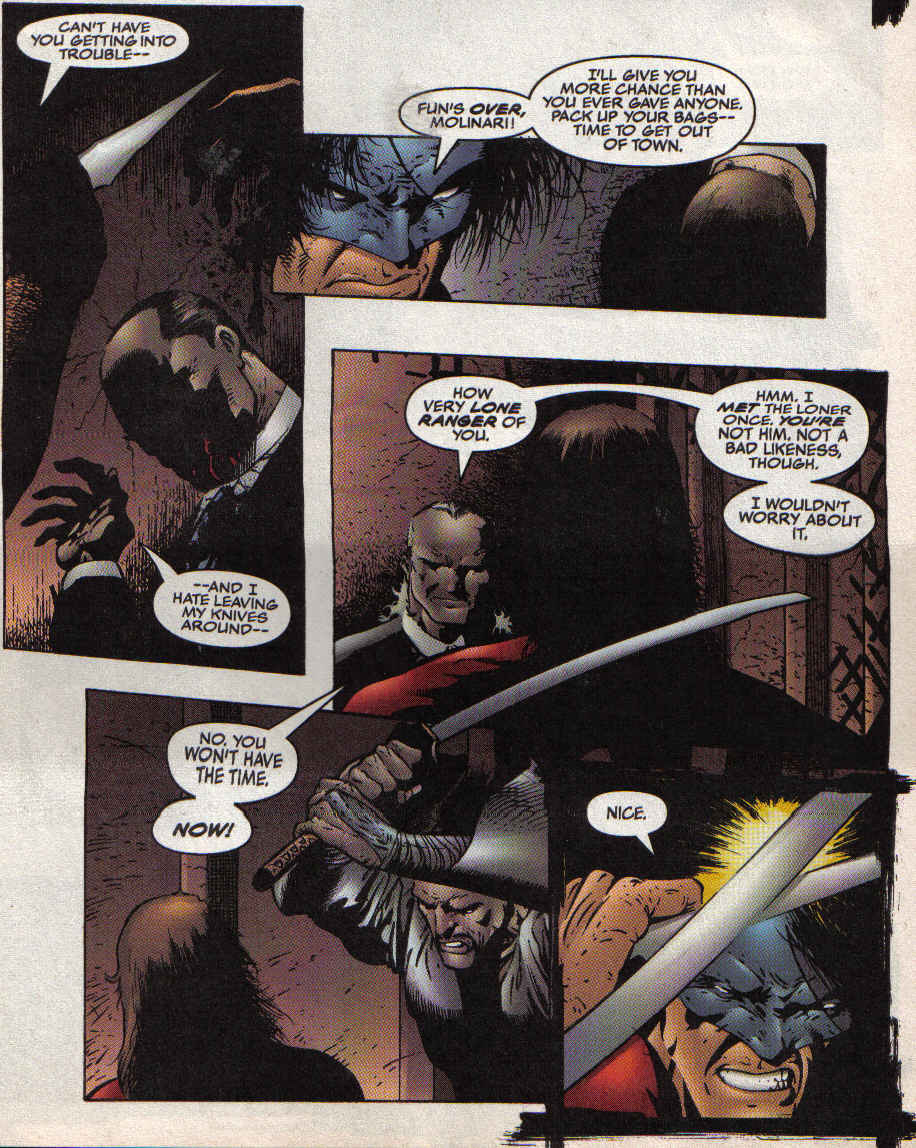 Molinari gets a little P.O.ed after this and borrows Barrow’s gun. He head shots all the guys Loner knocked out and then hands the gun back to Barrow with the warning “Those men disappointed me. Don’t ever disappoint me again.” Woah, that’s motivational. Talk about your tough love. Anyway Loner goes back to visit his old man once more. He fesses up to being the new Loner which causes his Dad to explain that Rick’s put them both in danger. The reason his Father stopped being Loner was because his identity was uncovered by the same gang Loner is harassing. Ray was given an ultimatum: stop being Loner or have his whole family killed. Now Rick has jeopardized that truce…

Posted by SonOfCthulhu at 4:47 AM