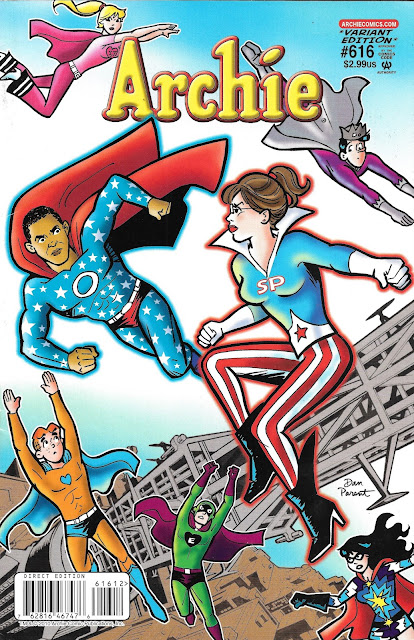 Only in the Archie-verse could Palin and Obama come together

Given that the election is just around the corner, I thought it wise to pull these books about President Barack Obama out and give them a good dusting off. I'm going to start with this two-part Archie comic that should tickle a few.

Back when Archie meets the Teenage Mutant Ninja Turtles came out in 1988, I thought the bland, inoffensive teen romance book would never come up with anything as strange. Boy was I mistaken.

Archie comics did some kind of weird hairpin turn after their management shakeup in 2008. They began making the book a bit more relevant by allowing stories that explored possible futures for characters that had been stuck in permanent stasis for half a century. Life with Archie saw the Riverdale teen married to Betty or Veronica in "what if" type tales. They increased diversity by adding in an ongoing homosexual character. And much weirder stuff was produced with limited series like Afterlife with Archie, the Chilling Adventures of Sabrina, and issues featuring special guest stars like Kiss, the Ramones, Predator, and Sharknado.

As this issue shows, even the vanilla main title got into the act, but don't expect this to be anything other than an Archie story. That's still the Comic Code Authority sticker you see in the upper right hand issue number area. What we have here is a book true to the Archie universe featuring bland out-of-character cameos by first term United States President Barack Obama and former Alaska governor/Vice-President nominee Sarah Palin.

It is odd to see this matchup. Controversy had to have been one of the reasons for this book's creation. Sarah Palin ran a heated and often-times overly aggressive campaign while running in her failed bid with John McCain, many times coming at odds with her own handlers. She had attacked then nominee Obama on issues the McCain camp did not think areas likely to win voters.

If that cover art (which is the variant) is to be believed, we are in for a knock-down drag out confrontation of superhero proportions. But at the end of the day this is still an Archie magazine. Expecting watered down cameos to go with their Disney sitcom teen dramedy will pay off in the long run.

I'm game to get this one started so we begin with a splash-page setting the scene for our upcoming hijinks. 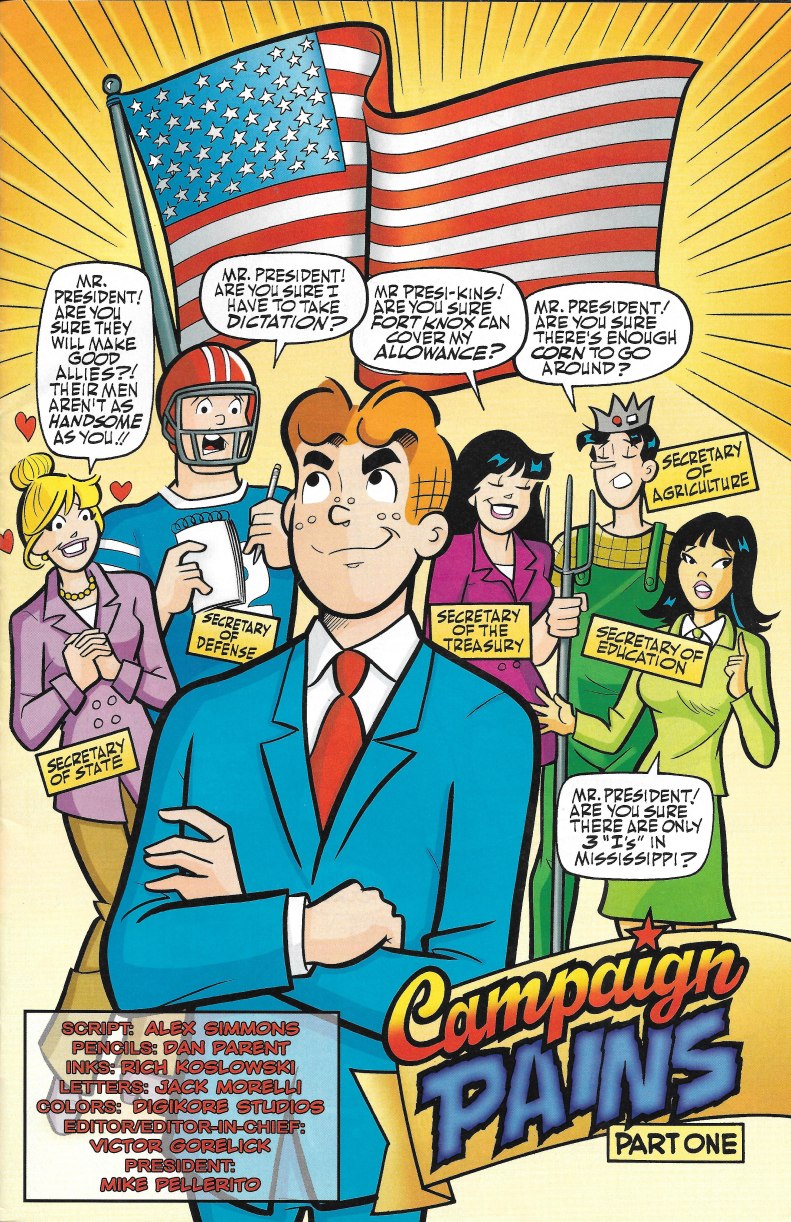 Archie has the bug to run for office, however this scene is just him dreaming of being President. We quickly turn to his abrupt wake up call, being late to the school's class president debate where he is one of the two students running. 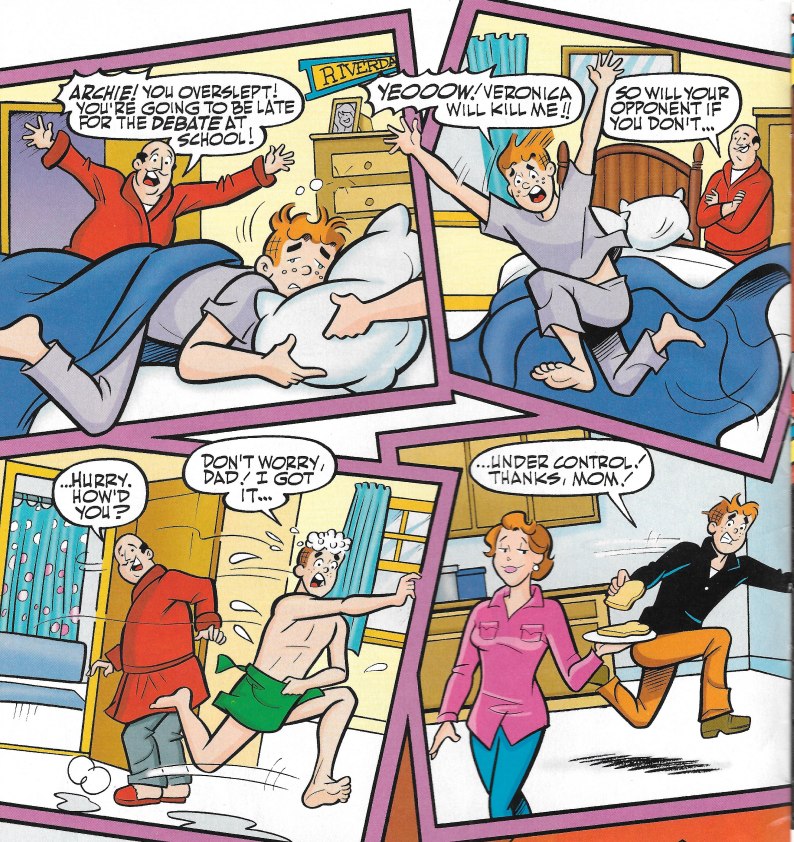 In a few panels we setup the friendly rivalry between Archie's campaign manager Veronica and Reggie's handler Trula. 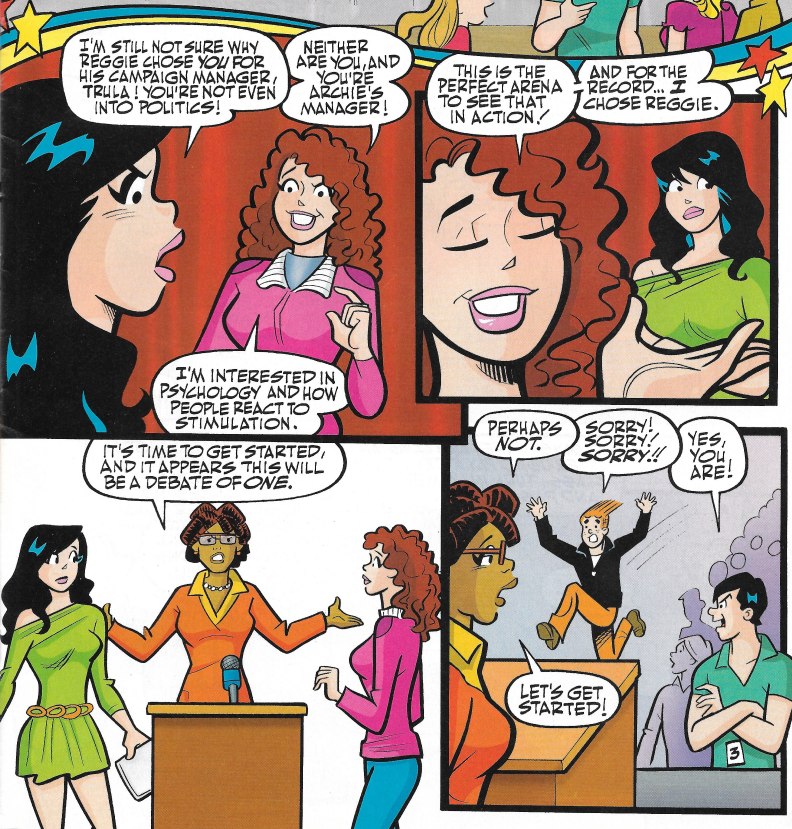 The stage is also set for the Archie to lose this debate, as Reggie hands him his head with a series of snide personal remarks. 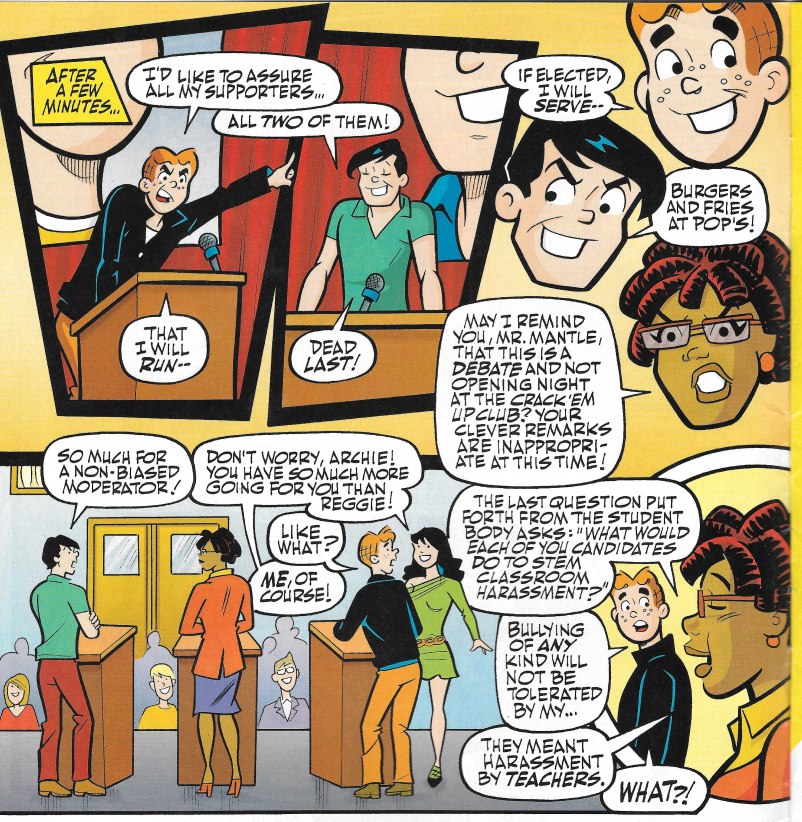 Beyond that, Reggie uses a fine bit of double-speak to answer a debate question with "he would talk to administrators about a problem" in such an eloquent manner that he is cheered off the stage and out of the auditorium. Archie and Veronica are left stunned by this and feel their campaign needs a good shot in the arm. Betty joins them, just in time for one of the lame Archie joke staples. 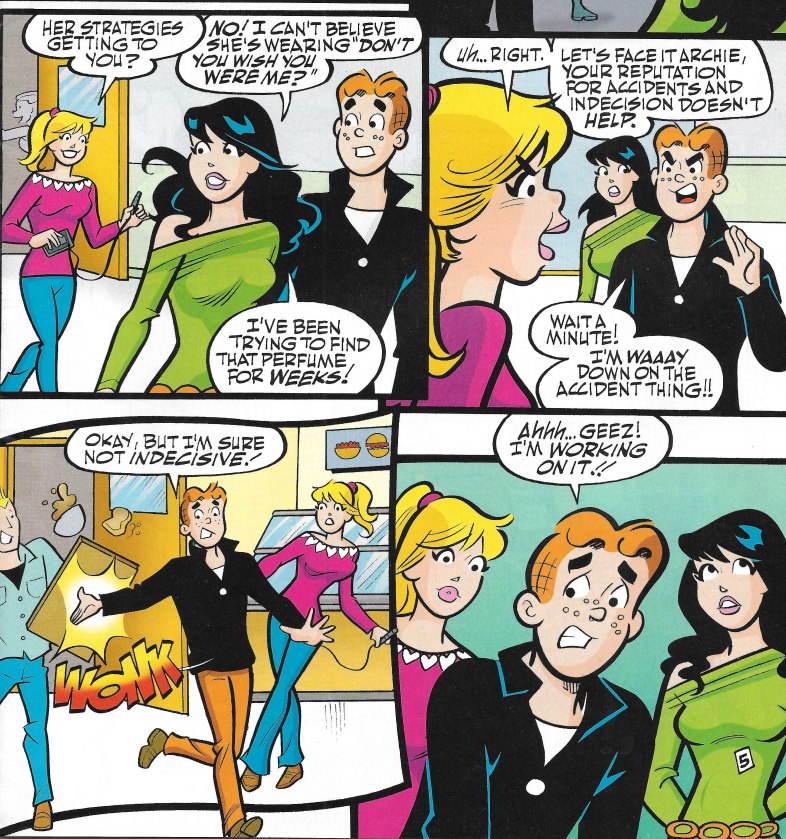 There is a "tacked on" quality to the humor in this book that grates so bad on the adult sensibilities. Kids would dig it, but everyone above the age of 12 is gonna find lots of groaners and little laughs here.

Given Archie's wishy-washy image, Veronica concocts a plan to change it. She rushes off to make preparations in secret while Archie finishes out the school day. While chilling with Jughead after final period, the issue of his campaign comes up and he states he only threw his hat into the ring because Veronica made him, somehow. And it really wasn't even his hat. 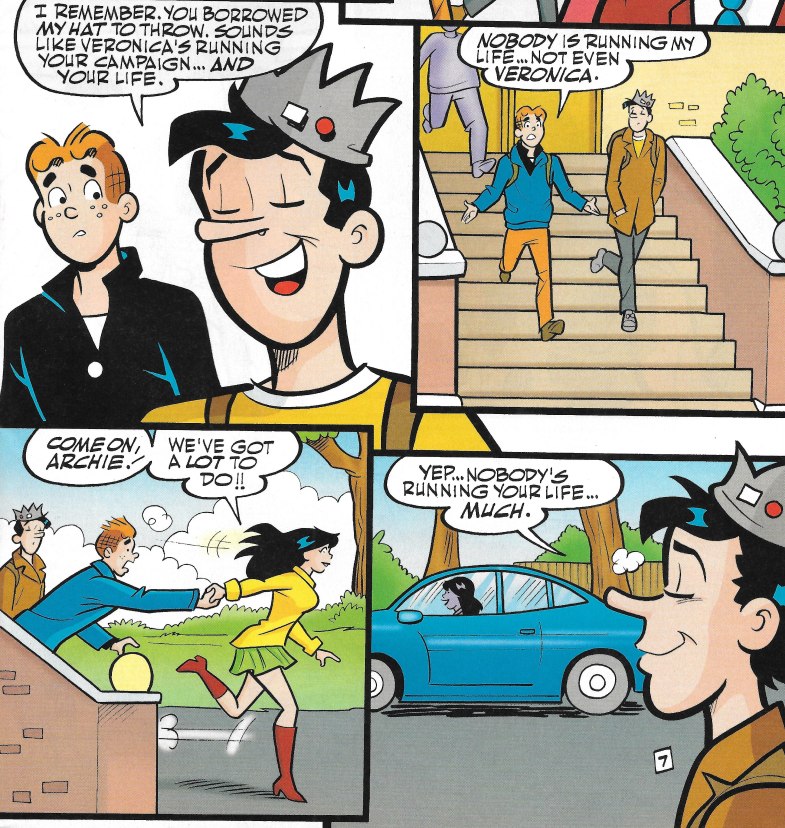 Well, Veronica takes Archie and dresses him in expensive clothes, styles his hair so…that it looks exactly like it always does, and they board one of her daddy's private jets.

Their destination? This Future and Energy Conference and something about improving his image by getting him seen with "the right people". 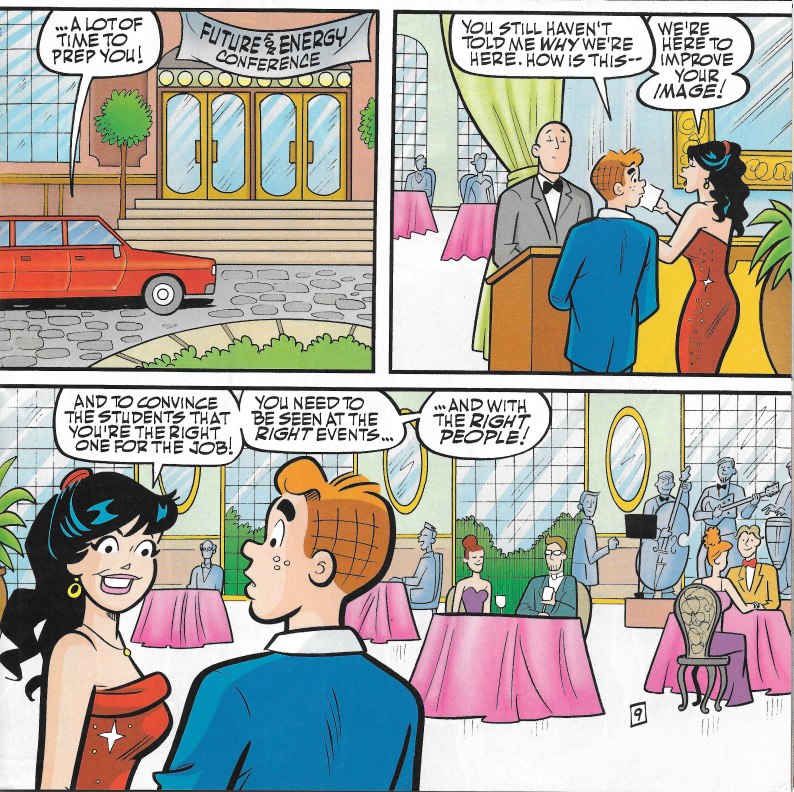 Riverdale's location has never been disclosed to my knowledge, but this interaction places it firmly in blue state territory. 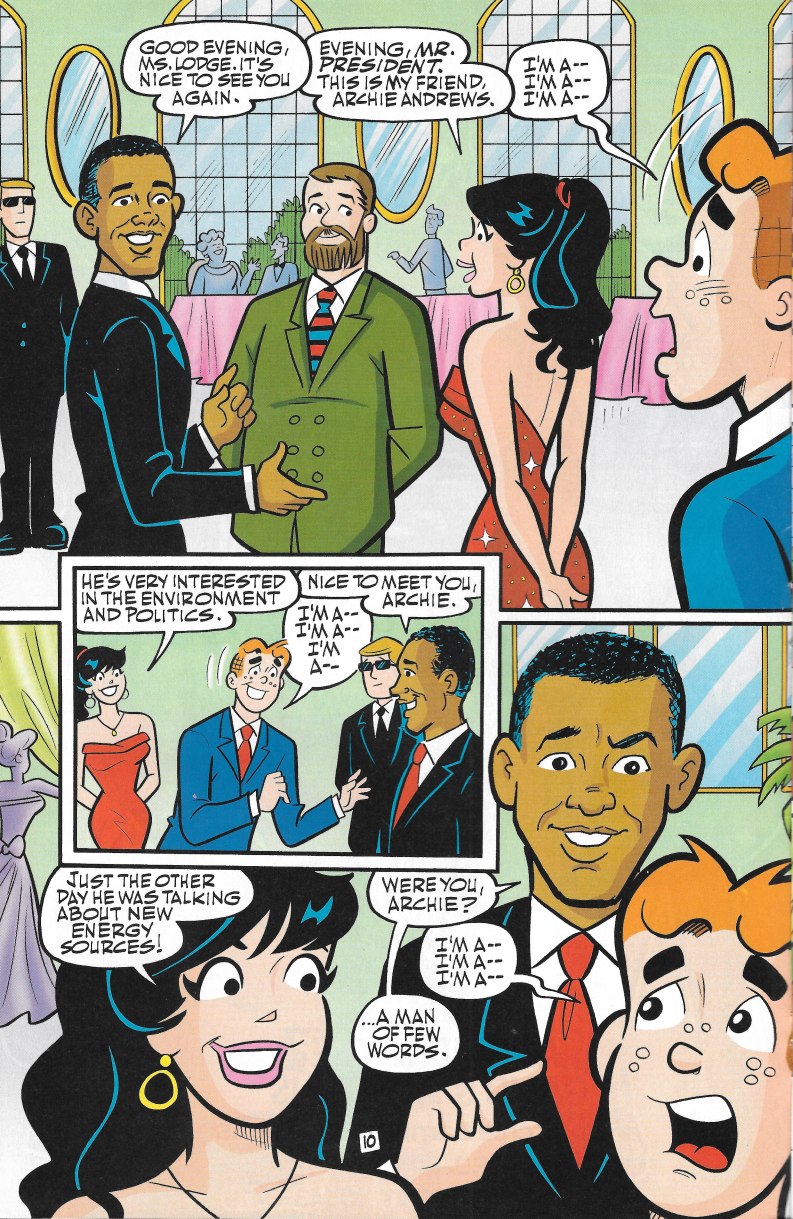 I say that because getting seen with Barack Obama in the Deep South where I am would turn half the voters against you. Because: cultural racism and party loyalty. It's a thing, ya know. But in the Archie-verse, getting your picture taken with the President, ANY President, is a magic salve for your campaign ails. Oh, and how does he actually get seen at an event that none of his class mates (except his campaign manager) is attending? 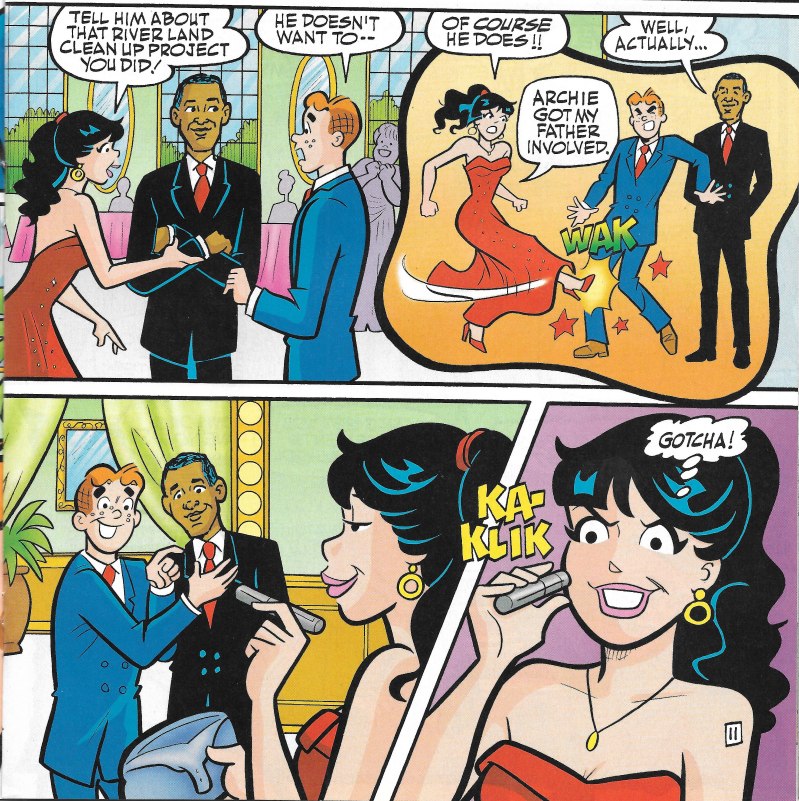 Veronica has a camera in her lip gloss. Good job, secret service.

Archie is oblivious to all this, of course, because he is too morally upstanding to do ANYTHING duplicitous. Which speaks a bit to Veronica's character. She WOULD do this, and while I've always spoken highly of Betty in the past, my thing for brunettes and this shady, bad-girl vibe moves me firmly, once-and-for-all into the Veronica camp. Plus all that money her dad has doesn't hurt. 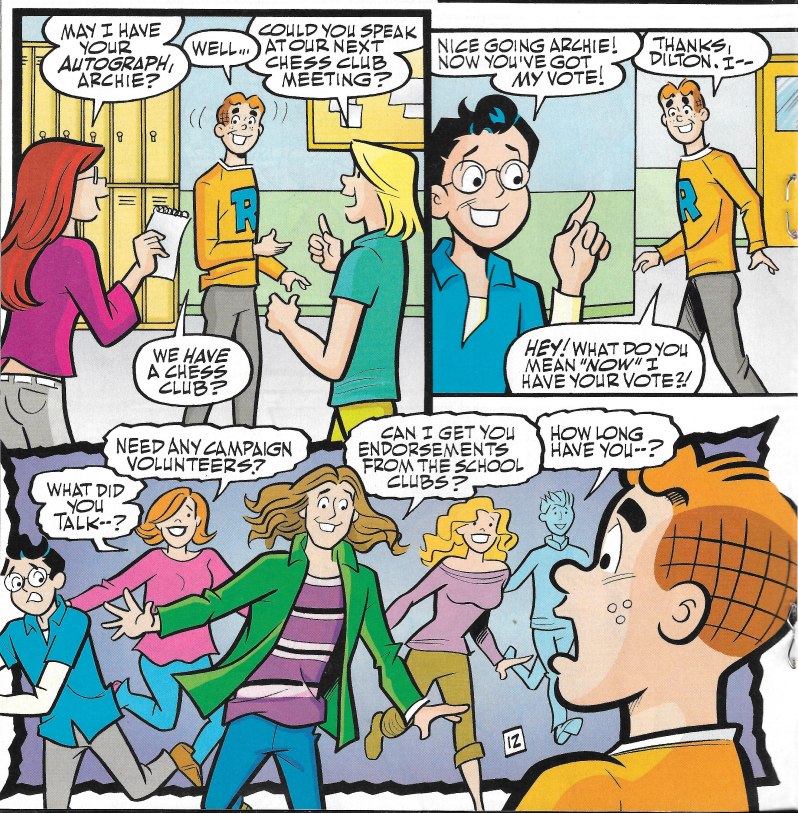 …Veronica decides to clue him in as to why. 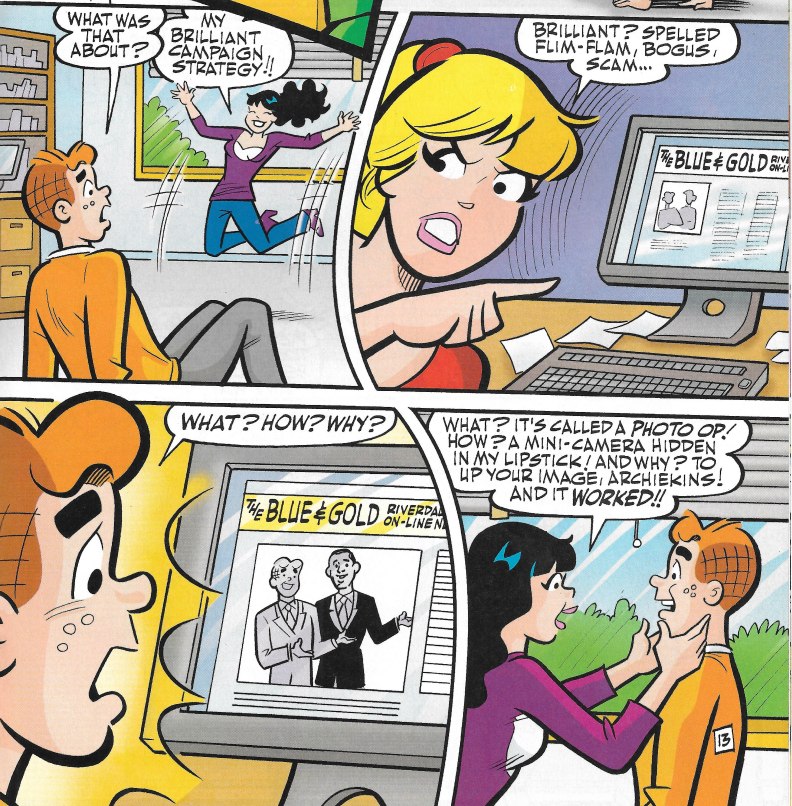 Oh you wicked, sexy bad girl. Why are you chasing after that ginger rube when you could totally get with this silver fox? Wait! Is she still in High School? After 50 years? Never mind. I like my women with the ability to get a degree after half a century at a learning institution.

Obviously the benefits of a morally compromised girlfriend don't occur to Archie either as he seems uncomfortable with the idea of being in a photo with the President shown in a manner that suggests he's been endorsed. 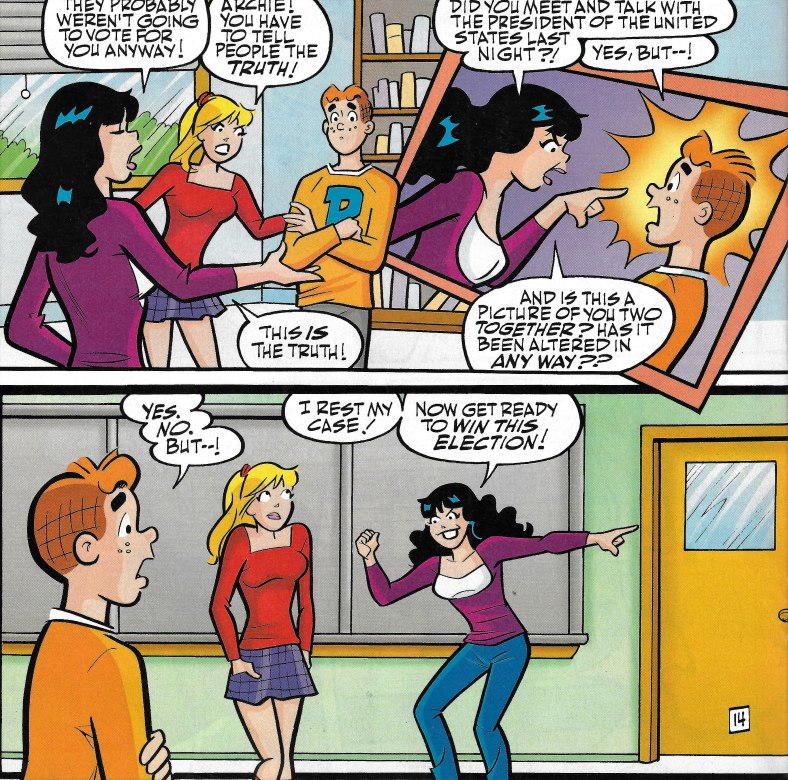 One other place where this isn't going over well is at the Reggie camp, where plots are being hatched by Trula to counter this strategy. 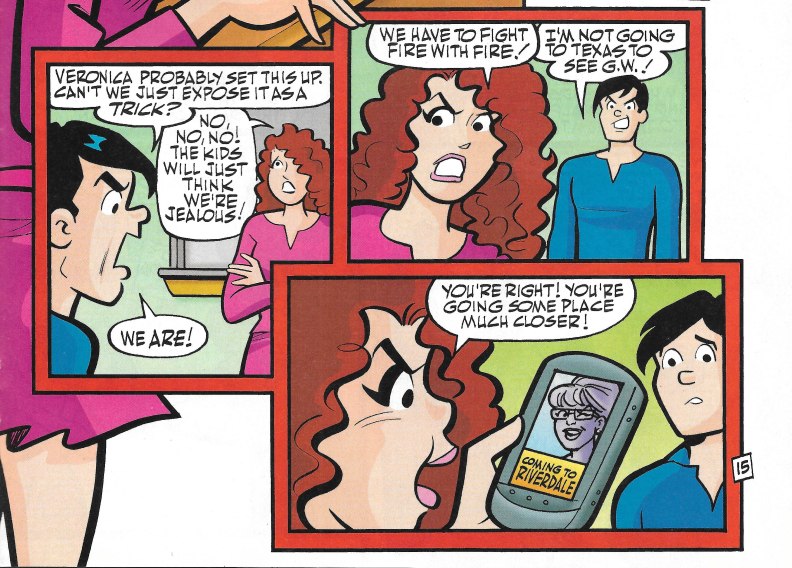 The counter is to have Reggie get into a photo op with Sarah Palin, who also doesn't know it will be used for political gain. And once publicized it causes friction between the campaigns… 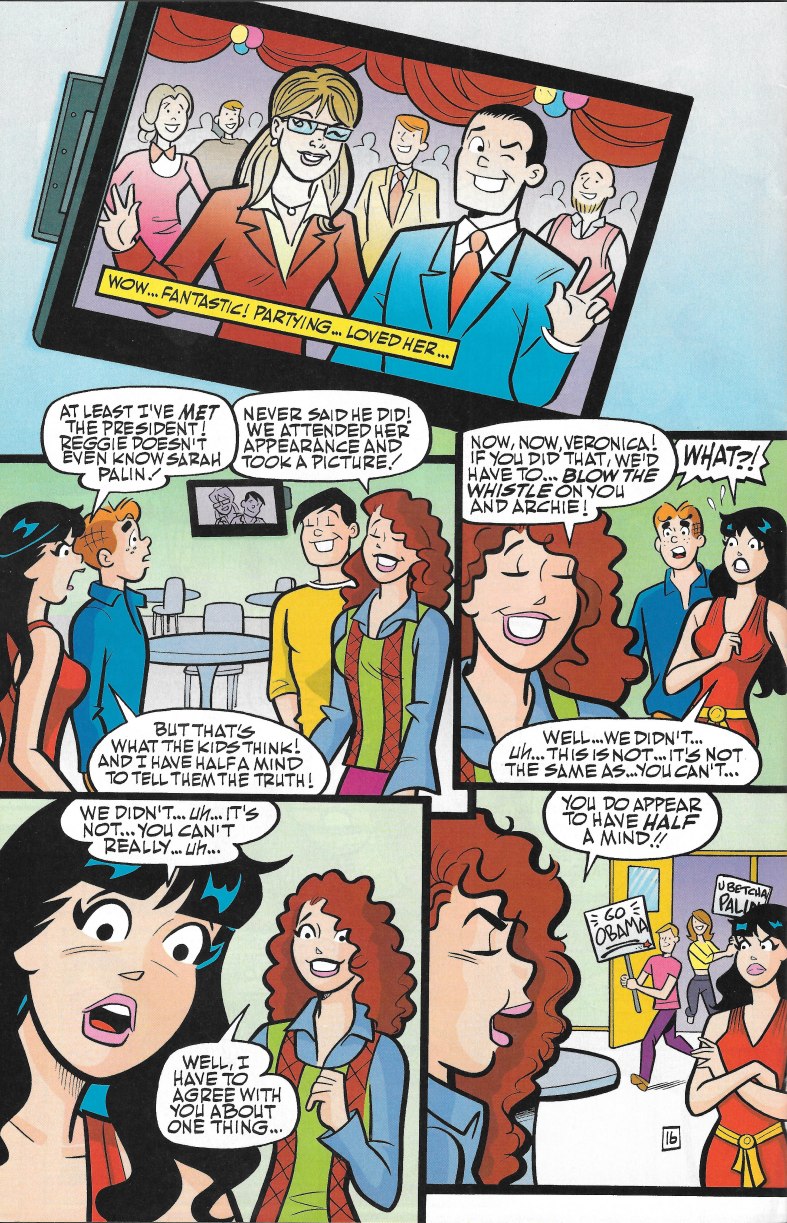 …and the student body. 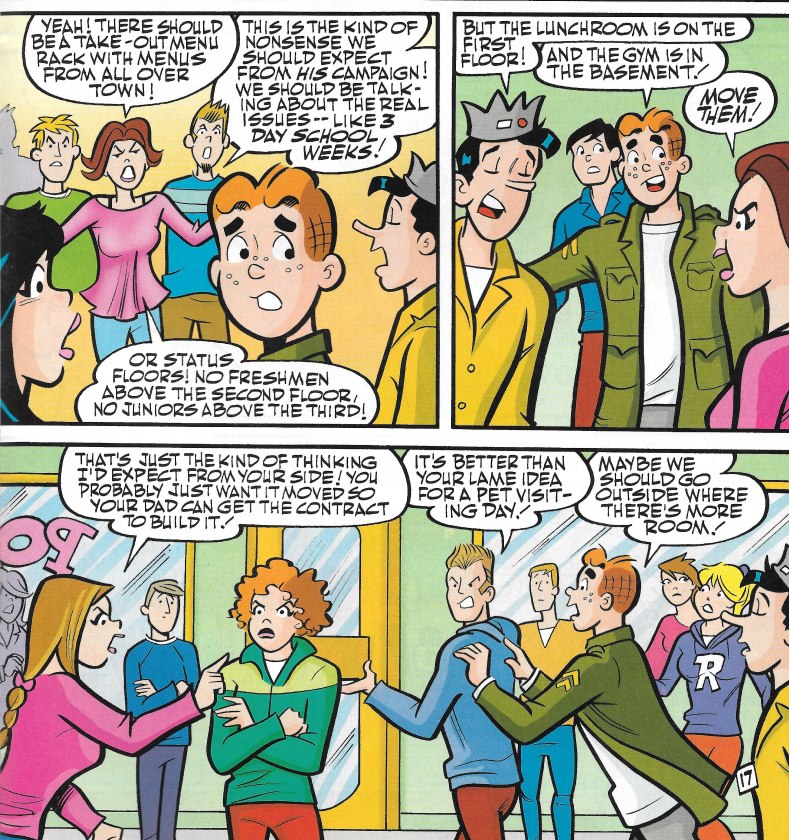 Geeze, it's just like the Trump/Clinton charged political environment. I was hoping to get a break from that in my comics reading.

The conflict gets so out of hand that local news media show up to cover the story of this wild high school election and the next thing you know they are national news. 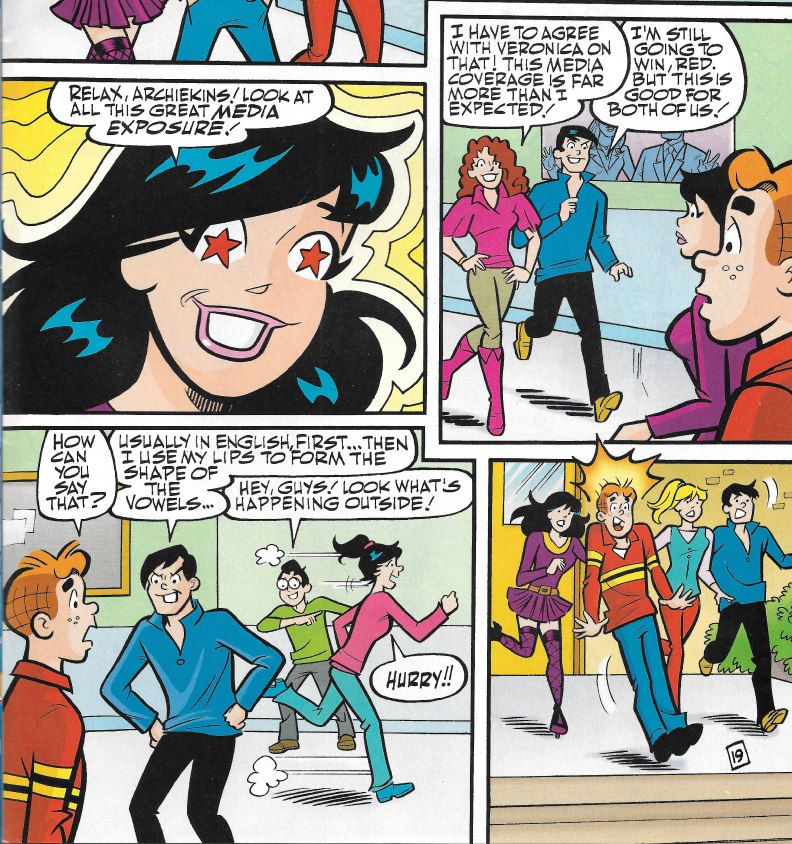 Which leads directly to this… 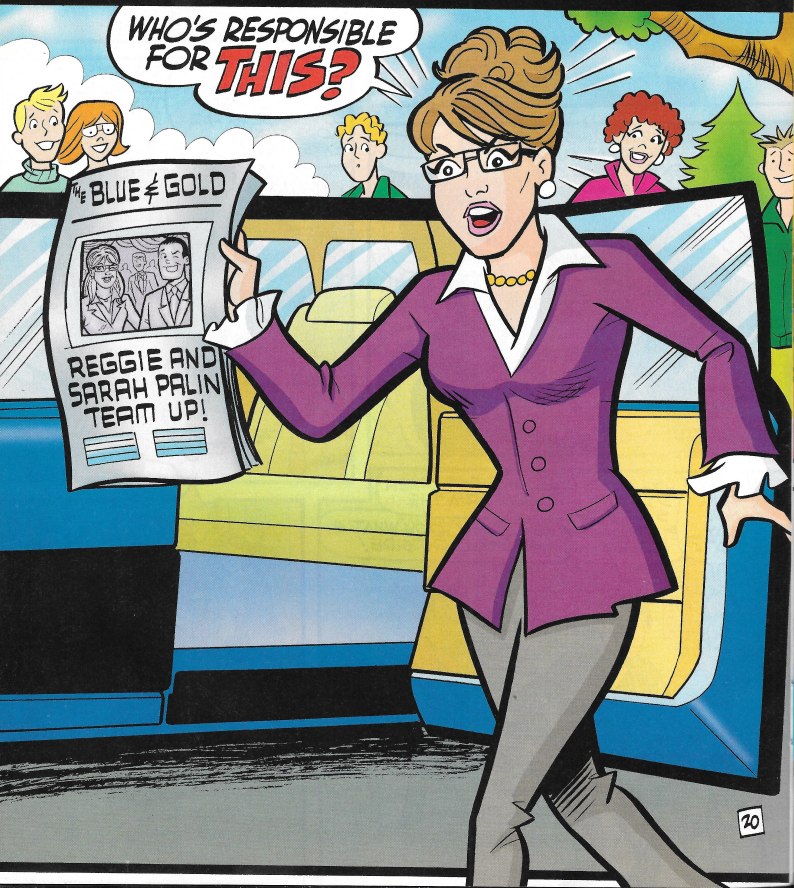 Sarah's so mad, her legs aren't even in panel! And this… 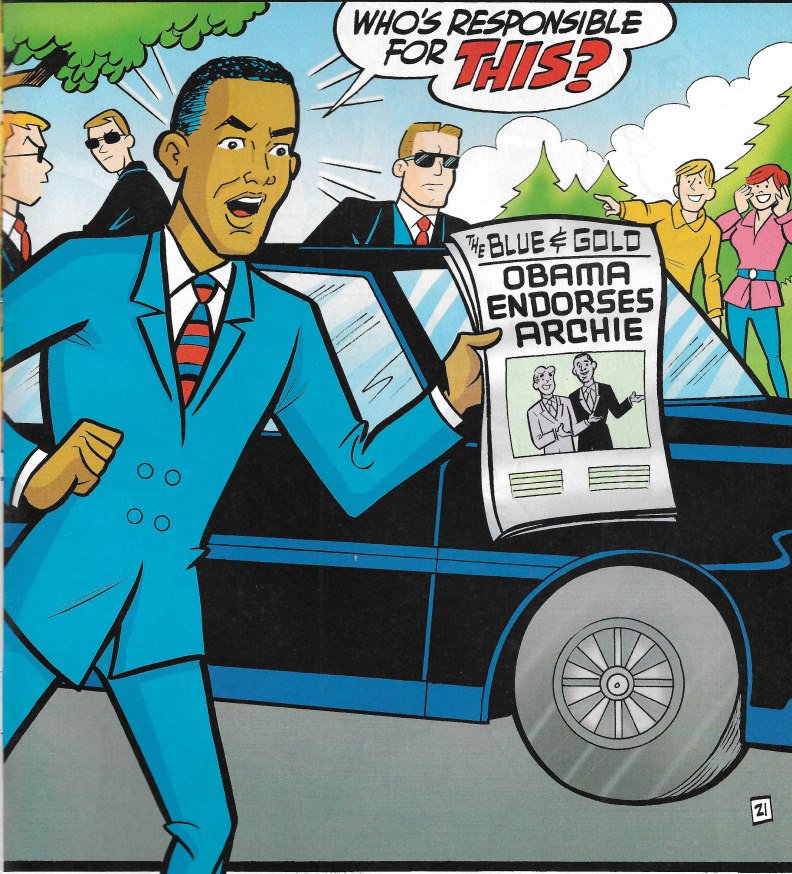 Barack looks ready to drone strike those kids. All of this is occurring at exactly the same instant, 'natch. Which means... 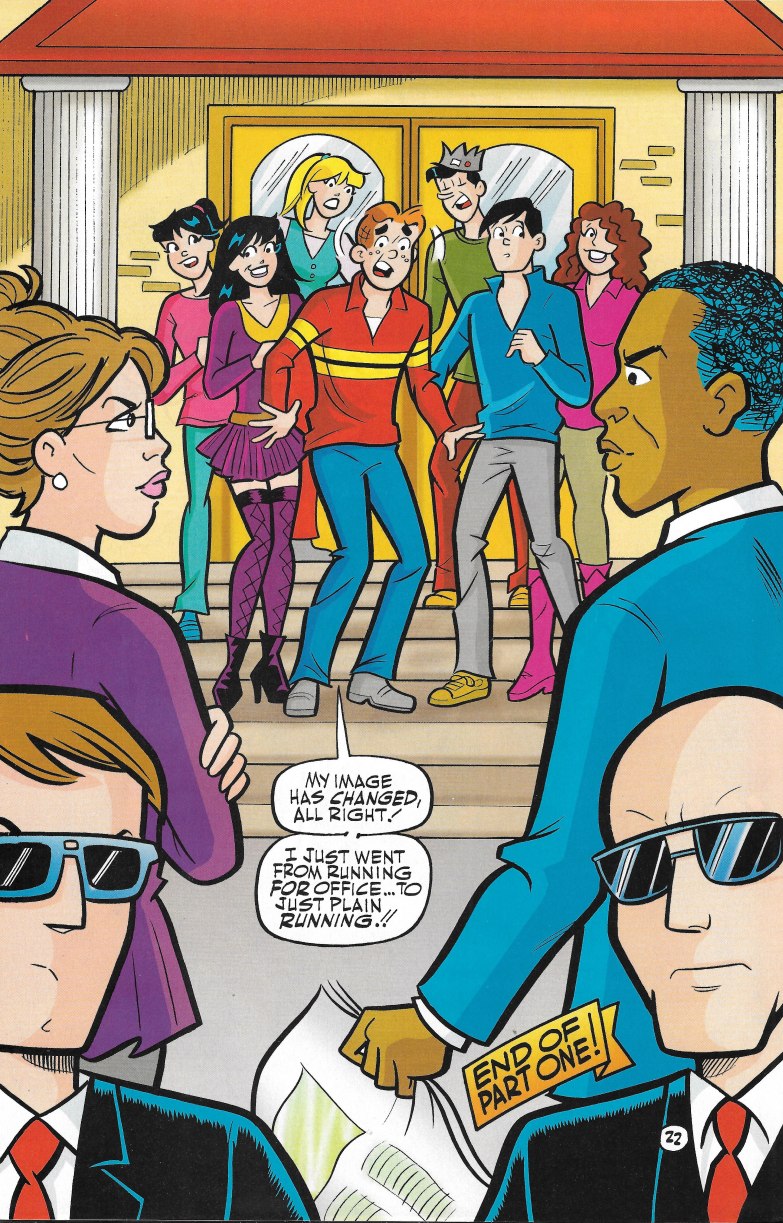 "Archie, you got some 'splaining to do!" Also, the build up here to a knock-down, drag out fight between these two is so on the nose here. If this happened in real life there would be HUGE partisan attacks by both parties ending with a fireball that would destroy Riverdale and all who resided there. Never call down the fury that is politics. That's why we only speak our party affiliation in hushed whispers to those who have already given us the secret handshake.

Continued in next Crapbox, so be here for how all this shakes out.…
Posted by SonOfCthulhu at 7:16 AM