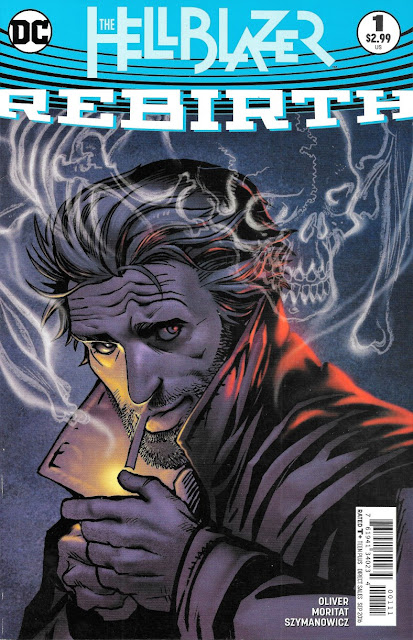 A chance discount bin find of a NEW comic?
Does that mean DC got Constantine WRONG in the new Rebirth?

John Constantine has to be one of the best characters to come out of the mind of Alan Moore. Developed in his run on Swamp Thing (which is classic and definitive, by the way. Not to be missed.), Constantine is a chain smoking, hard drinking, trench coat wearing Brit who looks like Sting from the music group The Police. His demeanor is caustic, smart-assey, and he fancies himself a bit of a know-it-all. Although, once you get below the surface, the reason for all these faults becomes clear.

John is a "detective", as he calls himself, but the more apt term would be warlock or perhaps demon-hunter. Between knowledge of the occult trade and his sharp wit, John's managed to keep himself and humanity alive all these years. Sadly his backstory involves one event that didn't turn out so well, referred to in the original stories as the Newcastle accident. The details were always hazy and hinted at in those original stories, but the outcome was always clear: John had tried in his brashness to fight an evil by conjuring a greater evil under his control. However that evil had turned on him somehow, torturing his friends, scarring John's psyche, and claiming the soul of one abused little girl by the name of Astra.

John never fully recovered from losing Astra. He pushed everyone away, seldom involving anyone's help for any substantial period of time. Constantine became a loner antihero, for years battling demons and devils in the cause of a humanity he left behind.

And for twenty-five years we were treated to that version of Constantine and a really fine string of stories. And then DC screwed it all up.

Flashpoint. Flash messes with the timeline of the DC universe not once, but twice and reboots the whole mess. So we get a new start on various characters, most of which were pretty much a mess. 52 new books, each a restart and most that will show up in various states in Crapboxes to come.

John became a "villain of the month" title. Gone were the nihilistic bent of his stories. Lost were the well transitioned arcs we had with several issue setups that carefully lead us to horrifying payoffs. All swept away in favor of flashy single issue conflicts that felt about as phony and mechanical as this new John's guilt over losing Astra. None of the antihero flare existed either. I have two. They are, in the words of the character, "complete shite".

Then a miracle occurs. Well, more like the expected occurs. With sales in a nose-dive, DC reboots the universe AGAIN (don't ask me how, I really stopped paying attention after "The Green Team" and "The Movement") and we have REBIRTH!

And a new John Constantine.

As I opened the cover, I was really hoping for THE ORIGINAL John Constantine. Shall we see how they did?

We begin with Constantine in the past confronting a demon. There is no preamble, just John already on the losing side using his wits to get himself out of a jam. The jam being not tossed into the demon's home plane of Hell. 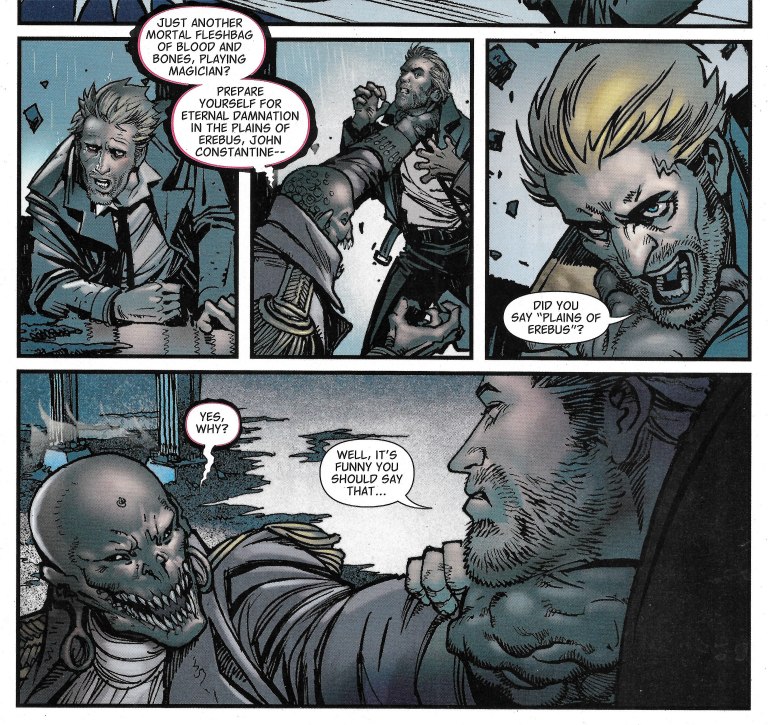 John's gambit this time is that there is a multitude of victims already on the demon's home turf and a fertile dislike for him. Mixing in one John Constantine might make matters decidedly troublesome for his captor. 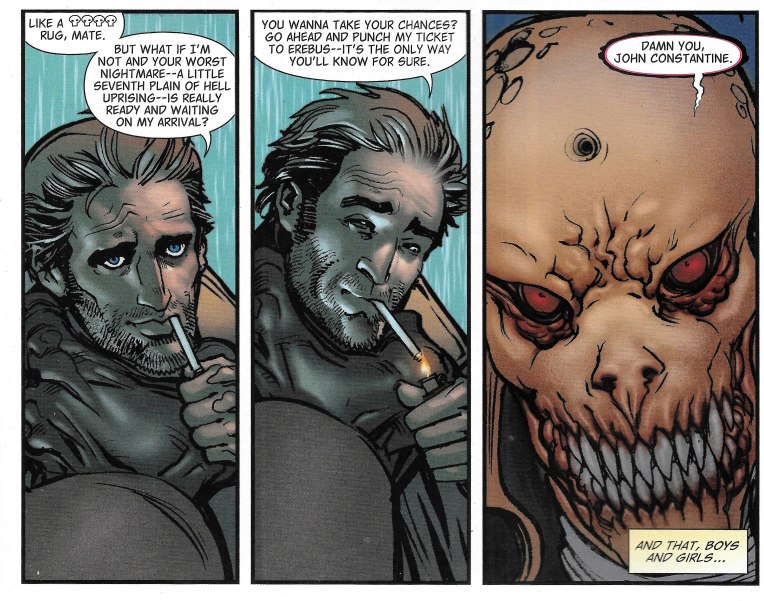 The ruse pays off, at least to a point. Unfortunately there is a price to pay for John still. The demon curses him, forcing John to leave England in its clutches or suffer…well, see for yourself.

The issue opens with Constantine returning to London, having enlisted the help of his mate Chas again. He's come back with a plan to get the curse removed and to retain his residency on his mother soil. We are going to let John get started here. 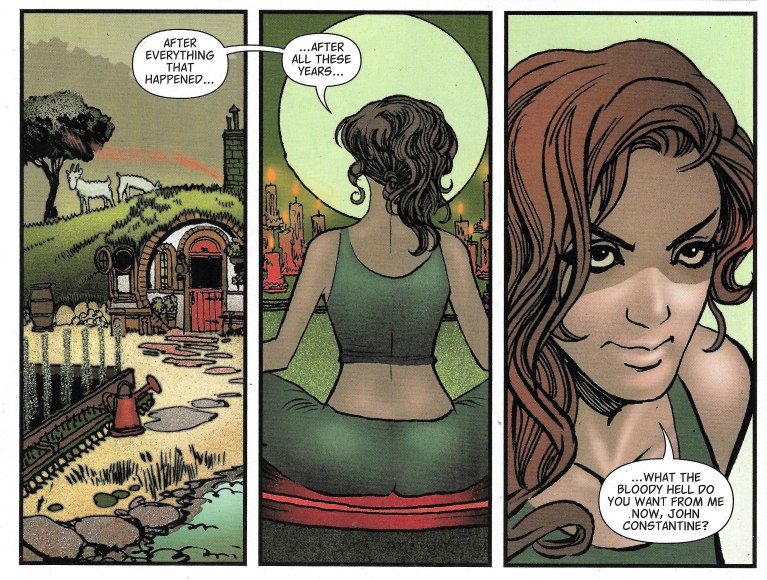 First he uses some connection to call this young lady to meet him. How exactly isn't shown, but we have to assume a magical connection. From there Chas drops him off and he summons the demon who cursed him. 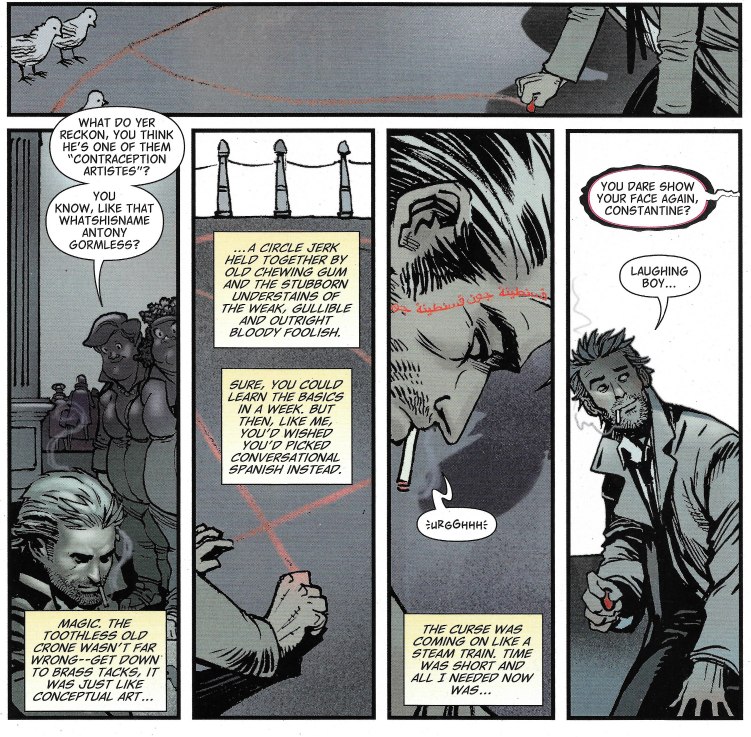 And promptly pokes the bloke to invoke something using his demon blood. Something that at the onset appears to go horribly wrong. 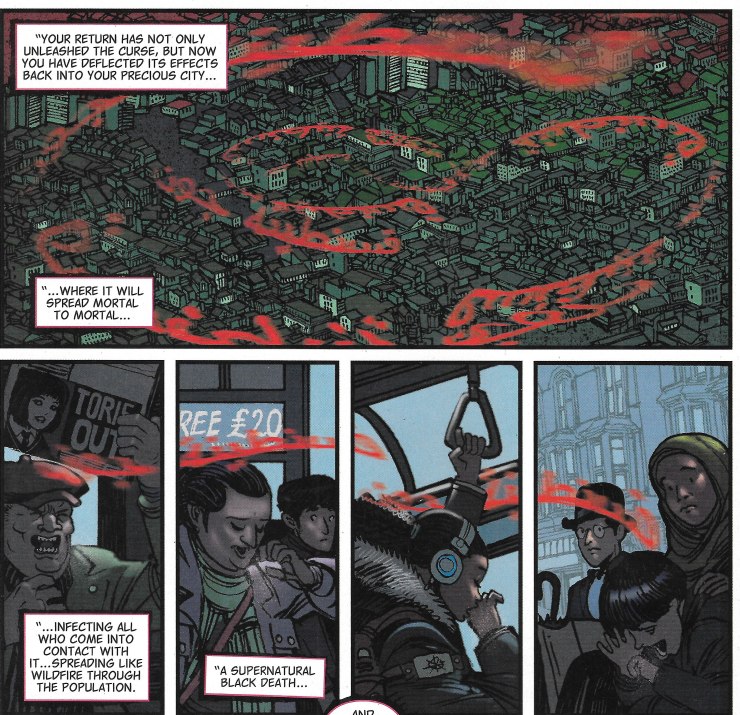 Unless John plans on taking eight million souls to Hell instead of himself. Even he's not that heartless, right? 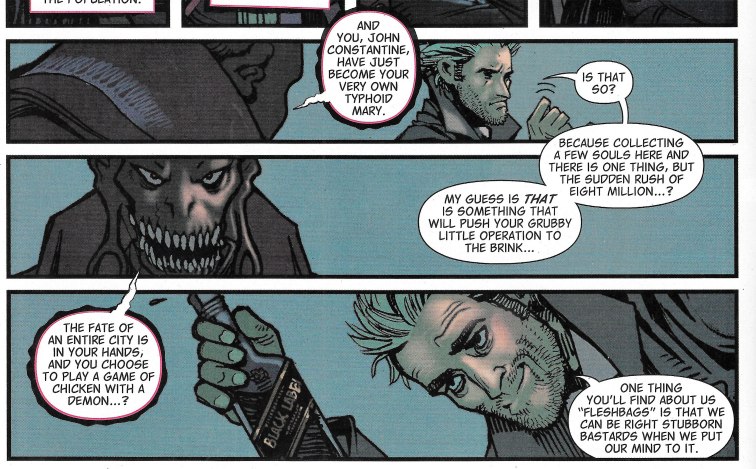 That doesn't sound encouraging. It sounds like Constantine is bluffing with a very weak hand. What if the demon says "Sure" and allows everyone to die? What then, John?

Just in case, two magic sensitive superheroes appear to have felt the screw up that John has made and arrive to settle matters when a third, Swamp Thing to be exact, shows up to warn them off. 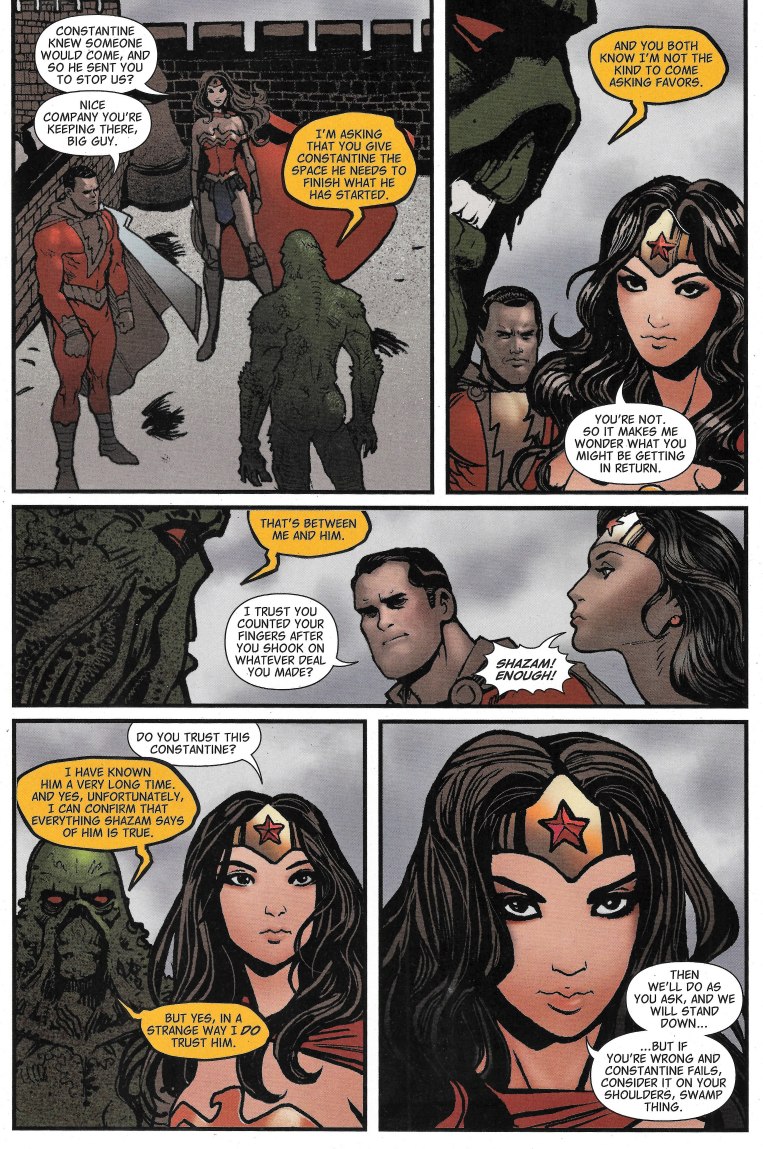 I love the shots of Diana being so young and feminine. It perfectly counterpoints her dangerous warrior side. I equally loath the fact that someone has decided that we should call Captain Marvel "Shazam" as that is an incredibly stupid change to the character and makes him incapable of saying his own name without effecting his trademark change to Billy Batson. They should fix that. I'm pretty certain the Captain Marvel guys I know would agree.

Anyway, so John wins the right to fix this himself. How does he do? 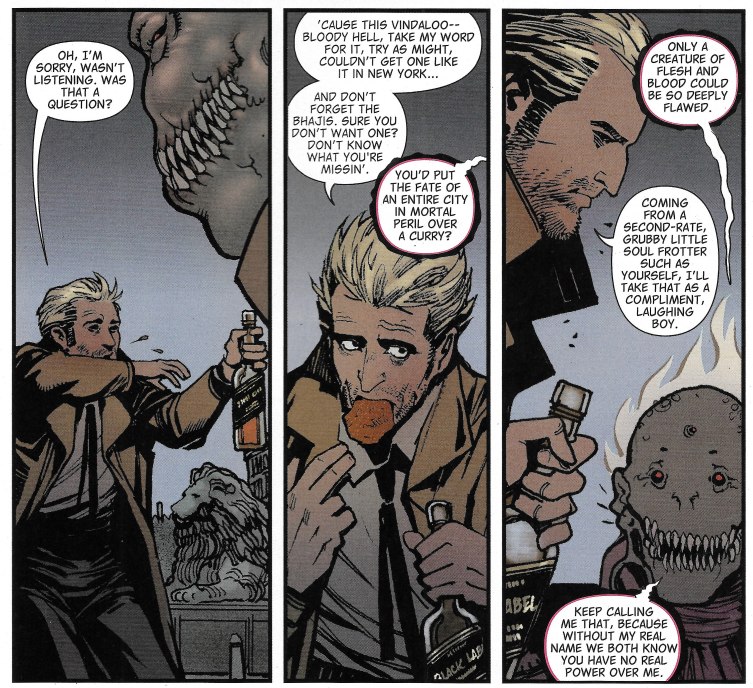 Well, he starts by seeming to be uncaring of what he has done. And then he eats dinner. And then he…doesn't appear to be that heroic at all, which is EXACTLY the kind of thing the New 52 was getting wrong. John is and always was kind of a wanker. His whole stich is that he doesn't look like he cares what happens to us at all when actually that's all just a way to keep everyone around him off balance. Or maybe it's not and he doesn't, but he fixes things anyway. Making him some namby-pamby goody-two shoes only turns off his core audience. This is what people expect from John. Utter disregard for the whole sodden mess that is life on this ball of mud.

By now the demon thinks he's got John's number though, and offers him Astra's soul if he lifts the spell, leaving London forever. He tempts better than that snake in Genesis. 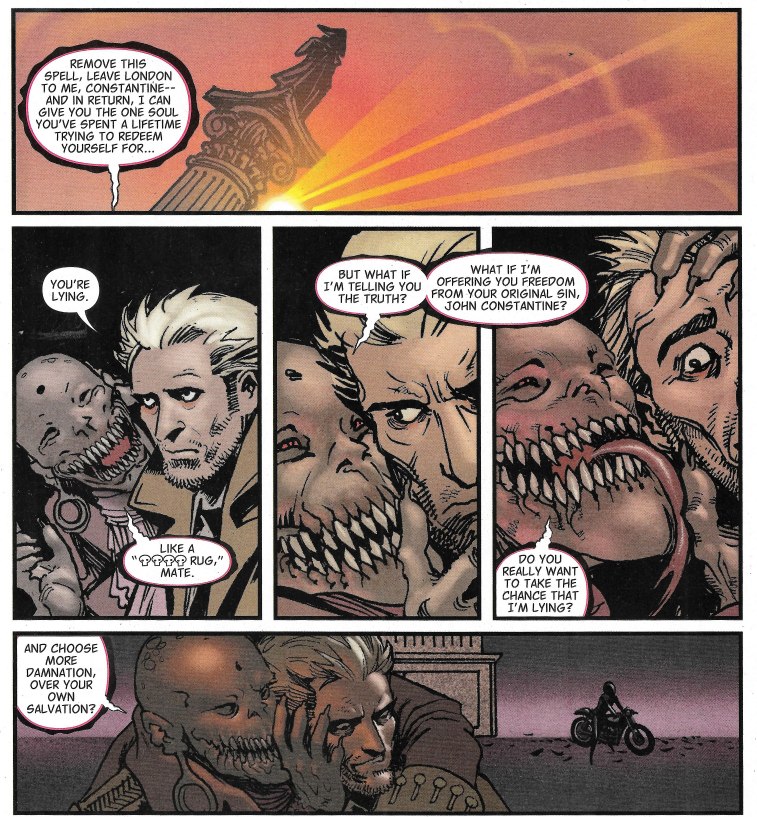 But never fear, that motorcycle rider in the background is the girl Constantine "contacted" earlier, arriving just in time to read toothsome's mind and tell John the demon's true name. 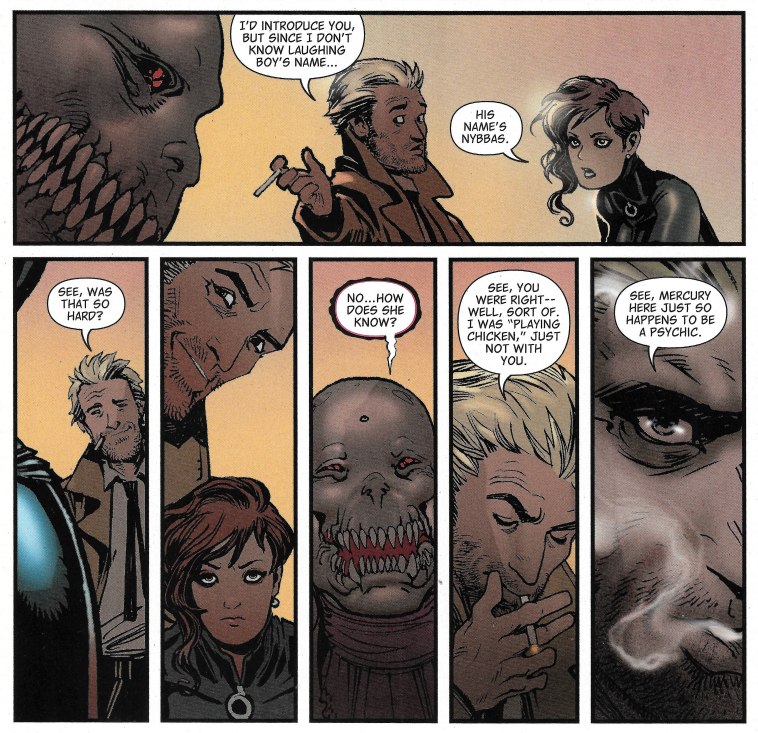 Which is where we end it. John has the curse lifted and London is saved. As for Astra's soul? That remains to be seen.

I will be cautiously optimistic on this issue's conclusion. Yes, it does exactly what The New 52 Constantine book did, and that was wrap things up in a nice bow by the end of 24 pages. Also not very much happens here. But it's part of the REBIRTH series, not the first issue of his ongoing, and they needed a story to instill faith in people that had none AND begin-and-end in one issue. The faith they were hoping to install was that this time they had Constantine right, some of which I genuinely saw. Yeah, this is the same bloke from before, same attitude and flair and all. The issue actually worked for me as a starting point. Where they take it from here is up to the guys and gals at DC.

Don't screw it up this time, please?
Posted by SonOfCthulhu at 6:32 AM