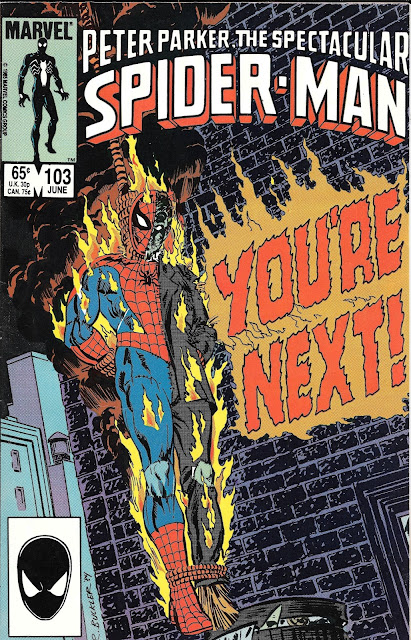 Someone is bound to get burned

Okay, so from almost the same troop that brought us Friday’s wonderful Spectacular Spider-Man # 116, here we go again. This time we have Armando Gil swapped out for Bob McLeod, but the result is the same: great art and a great story. I’m not going to bore you with long intro on this one, other than to say it was a joy to find it in the Crapbox and is now one of my favorite Spider-Man stories.

We begin near the end and do a bunch of flashbacks, so be prepared to hook up your time gem or cosmic treadmills. We will get to those as Police Captain Gene DeWolff interviewers Barry, this young college student, with Spider-Man present. And boy, the tale he tells sure is a doozy. 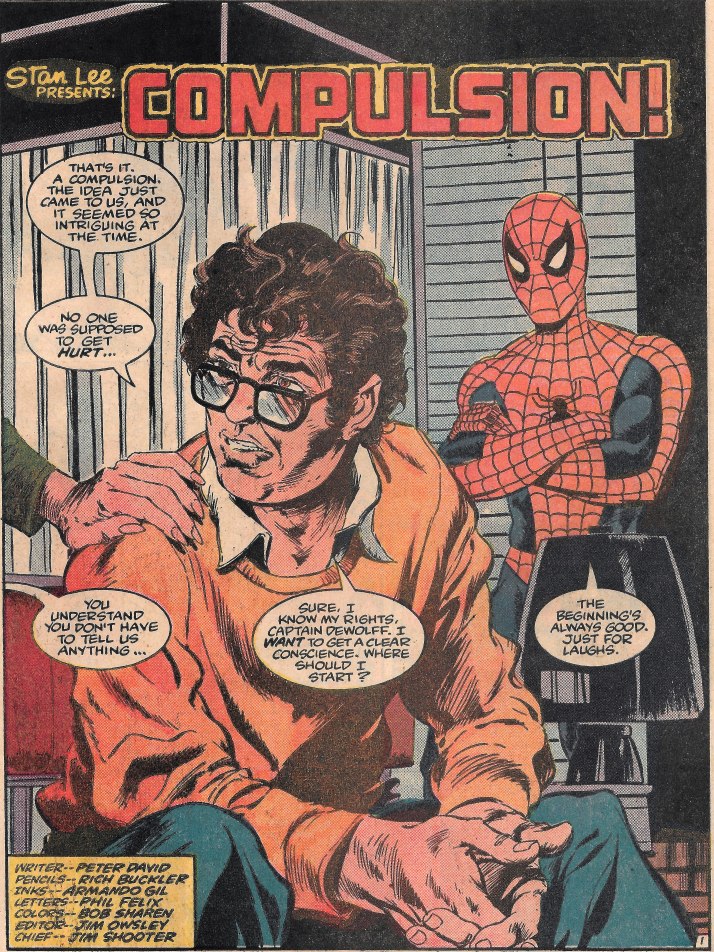 Several weeks ago, our “person of interest” sat around with his two equally brilliant friends in the Empire State University Student Lounge, looking for something to relieve their boredom. Talk centered around likely diversions and Thomas mentioned a new “superhero” roleplaying game, to which Ashley follows a bizarre and dangerous tangent. 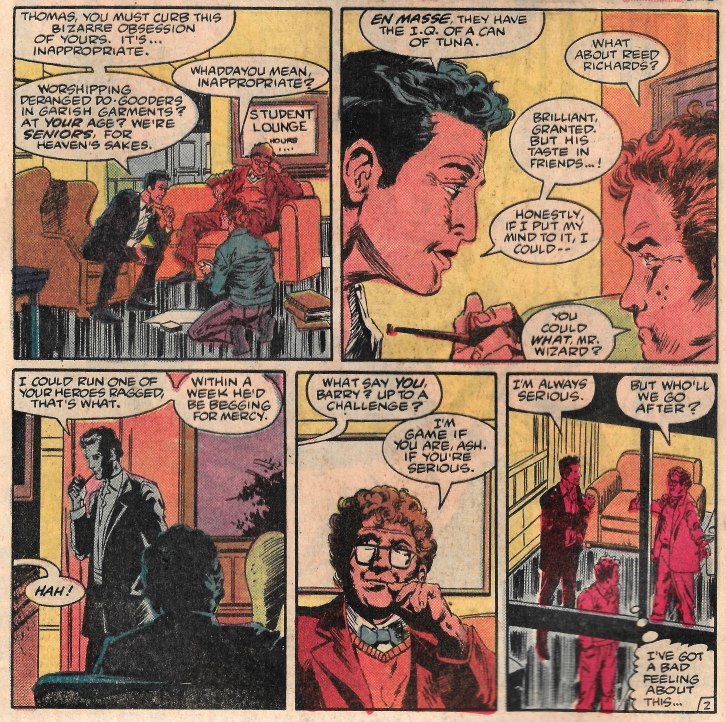 Pitting his wits against an actual superhero. Peter David then plays with the audience a bit. 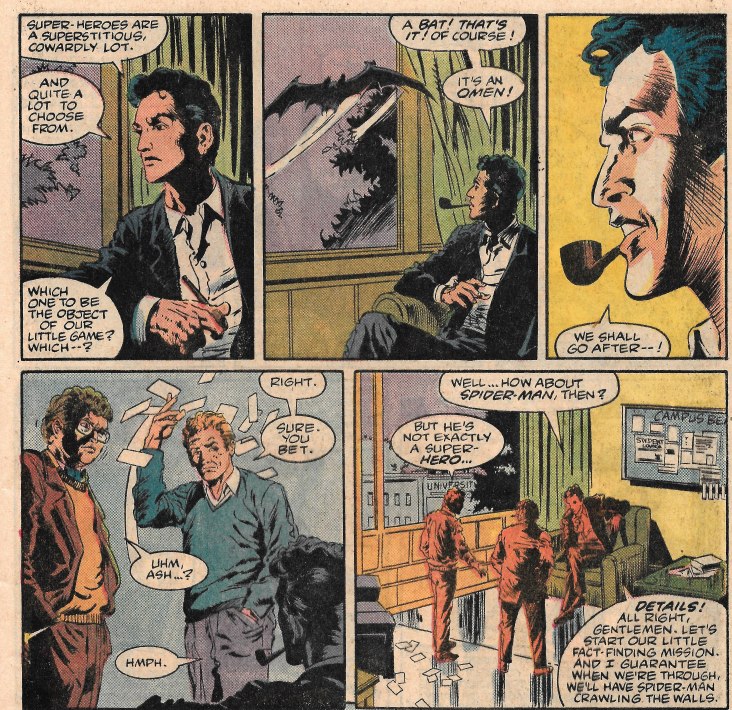 …before having the settle on Spider-Man as their intended victim. The issue had me right here. Just the right mix of intrigue, suspense, and humor.

The trio spend the next few weeks researching their subject from articles found in the library’s newspaper stacks to actual scouting expeditions to trace his route around the city. They find Spidey had a pattern in his patrols and come very close to uncovering his secret identity. 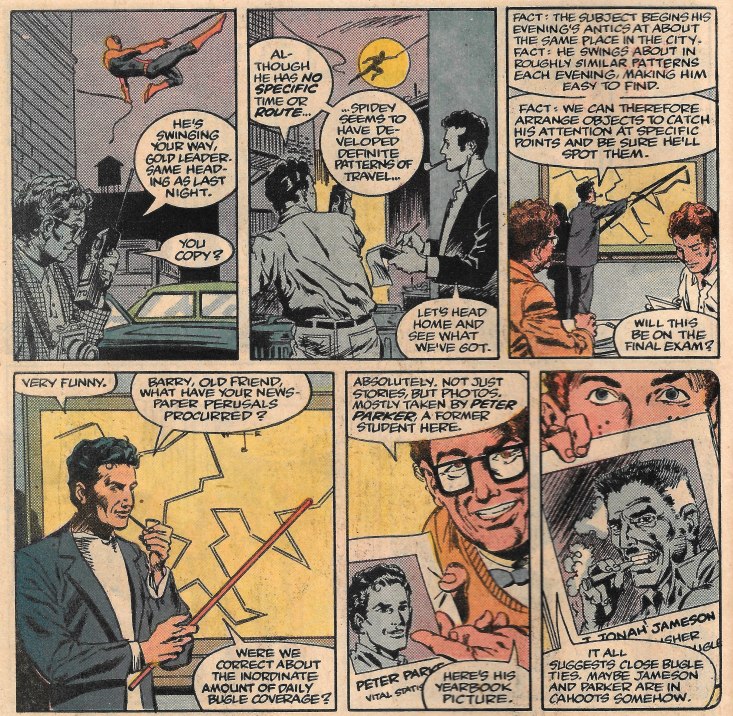 Back in our present, Spidey thinks to himself how sloppy he is to almost be caught by college kids.

They develop a profile for the villain behind the plot they are cooking up, a character they dub “The Blaze.” In part we are drawn in by the fact that people like us (geeks and nerds basically) could cook up something so diabolical and  match minds with another fellow geek. This is a great chess game we are watching. 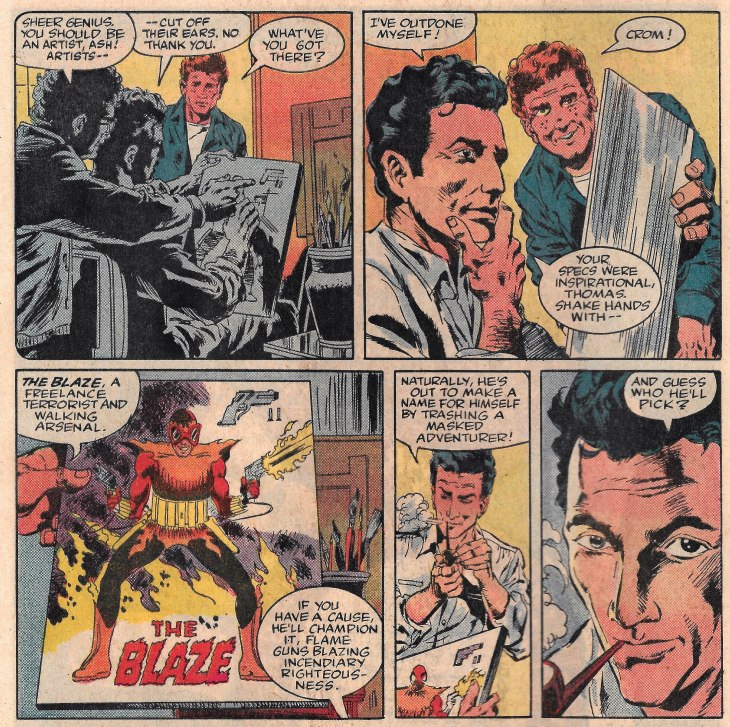 And the opening move begins with an unmarked envelop being delivered to the Daily Bugle’s offices. 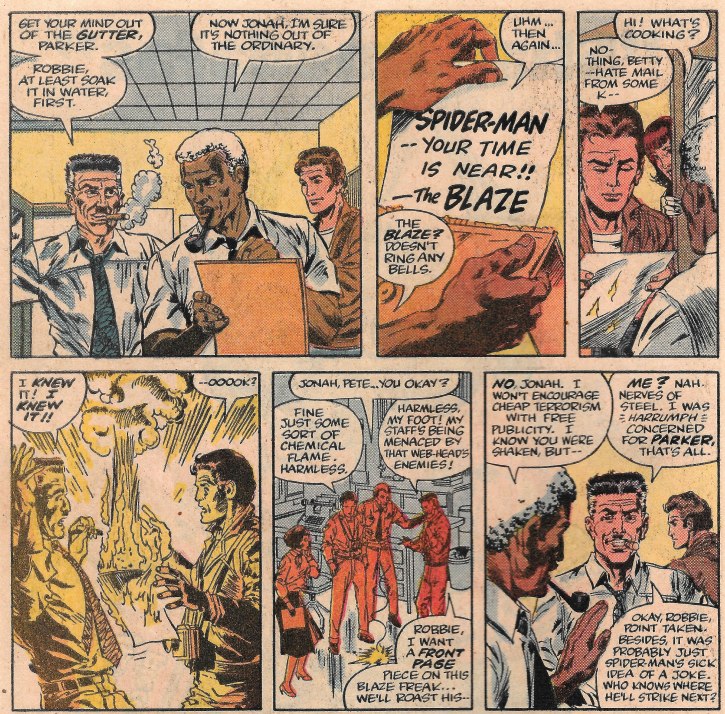 Next we travel to a burned up tenement building with Mayor Koch doing a little showboating to the ladies and gentlemen of the press. 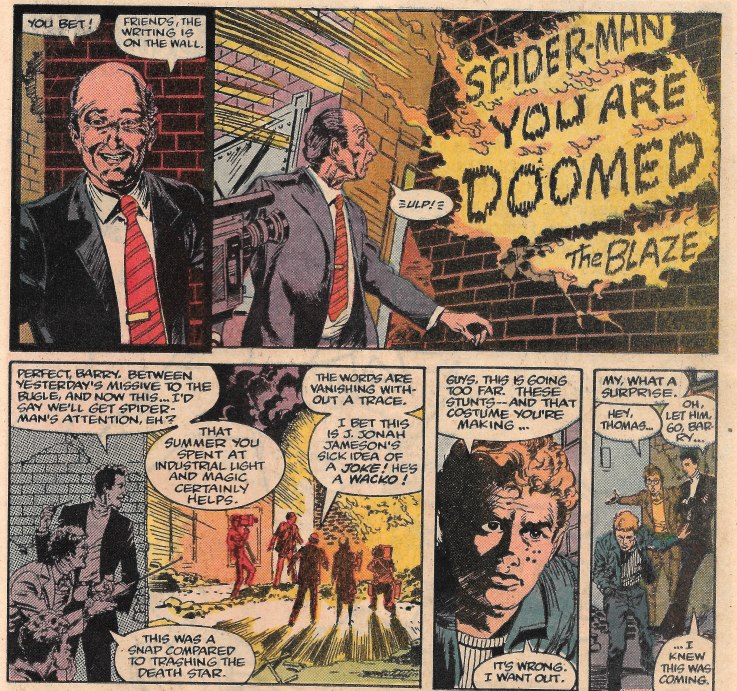 However, all is not well in Ashely’s little group. Thomas feels the guys are taking the prank too far and bails. Ashely seems unsurprised by this turn of events.

Now things really start to heat up as Ashely put son a Blaze costume and threatens Spider-Man via video. 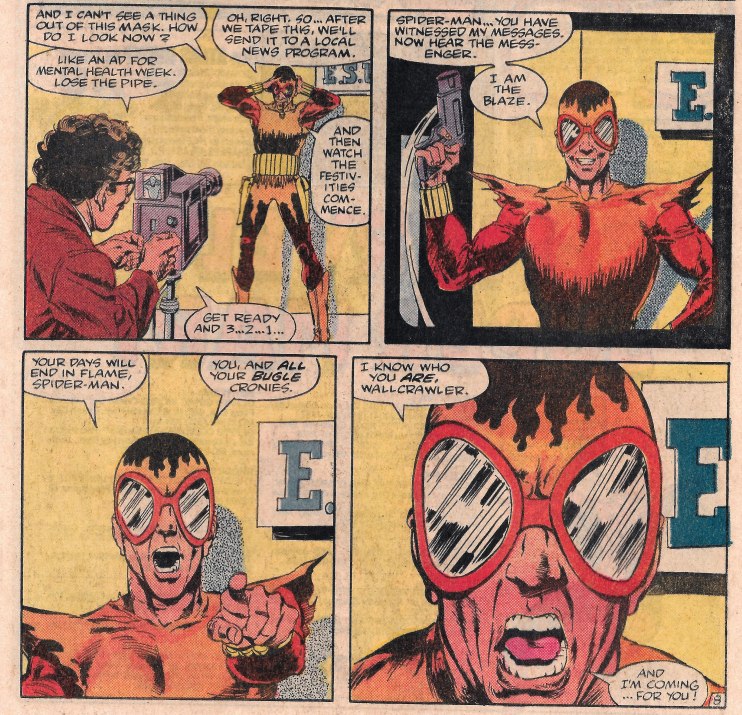 And as calls flood the Daily Bugle, the stress is taking its toll on Peter. He blows off steam at Ashely and Barry when they join a tour group of the Bugle’s offices and dare to snap his picture. 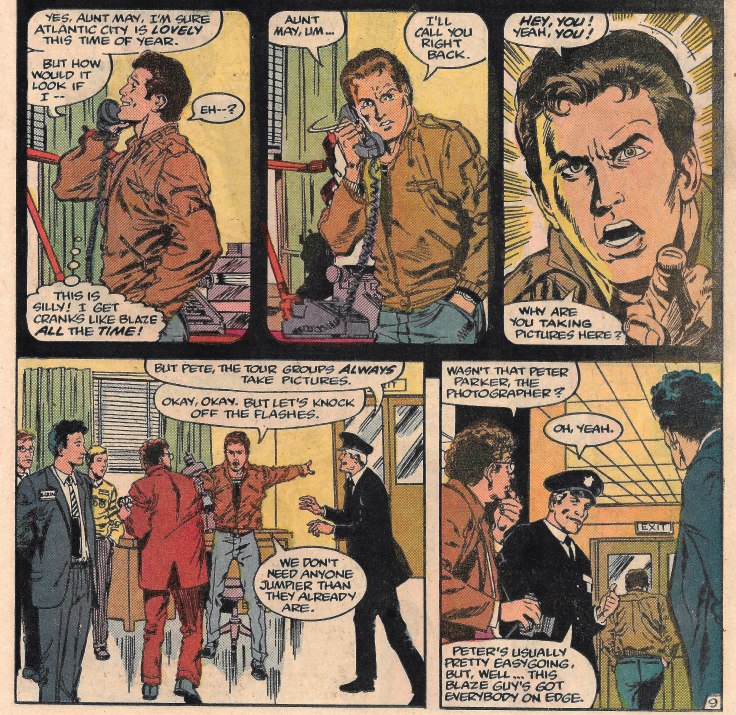 The guys aren’t done yet. The pull off their riskiest prank yet by staging an effigy on Spider-Man’s patrol route. And the effigy looks suspiciously like Peter Parker! 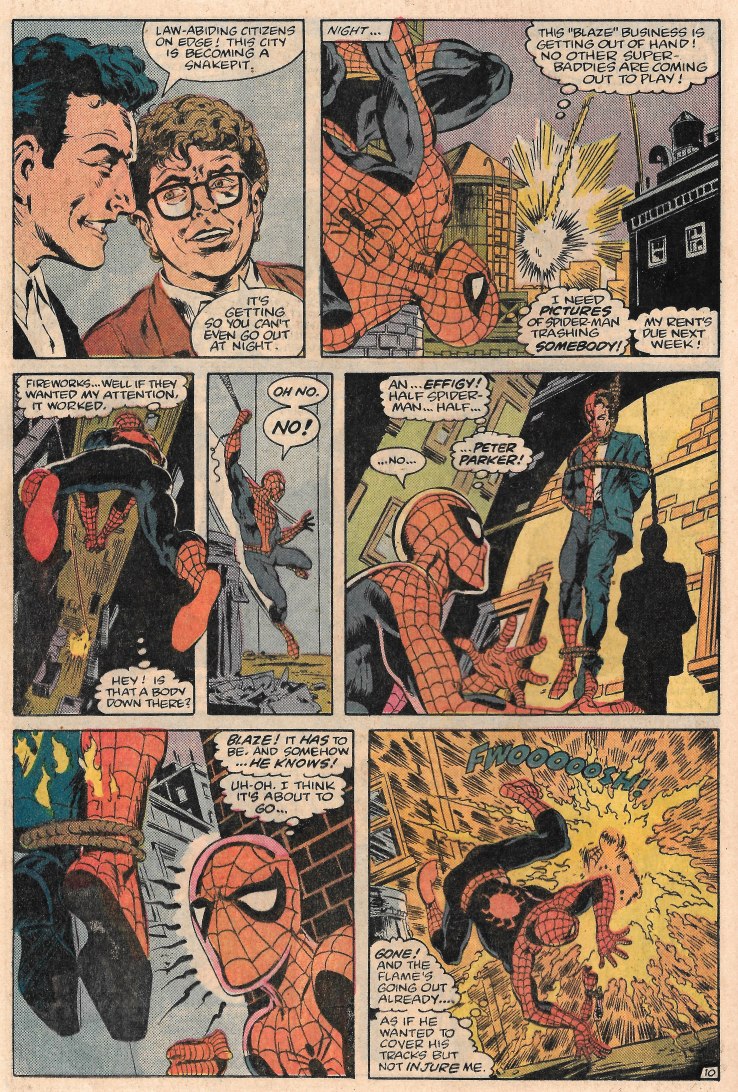 In the present, Barry explains why Parker was chosen, much to the secret relief of Spider-Man. It appears Barry bears some responsibility for his friend Thomas’ condition, who is shown badly burned. DeWolff asks Barry when they decided to make The Blaze into a real villain. Ashely answers with a real shocker… 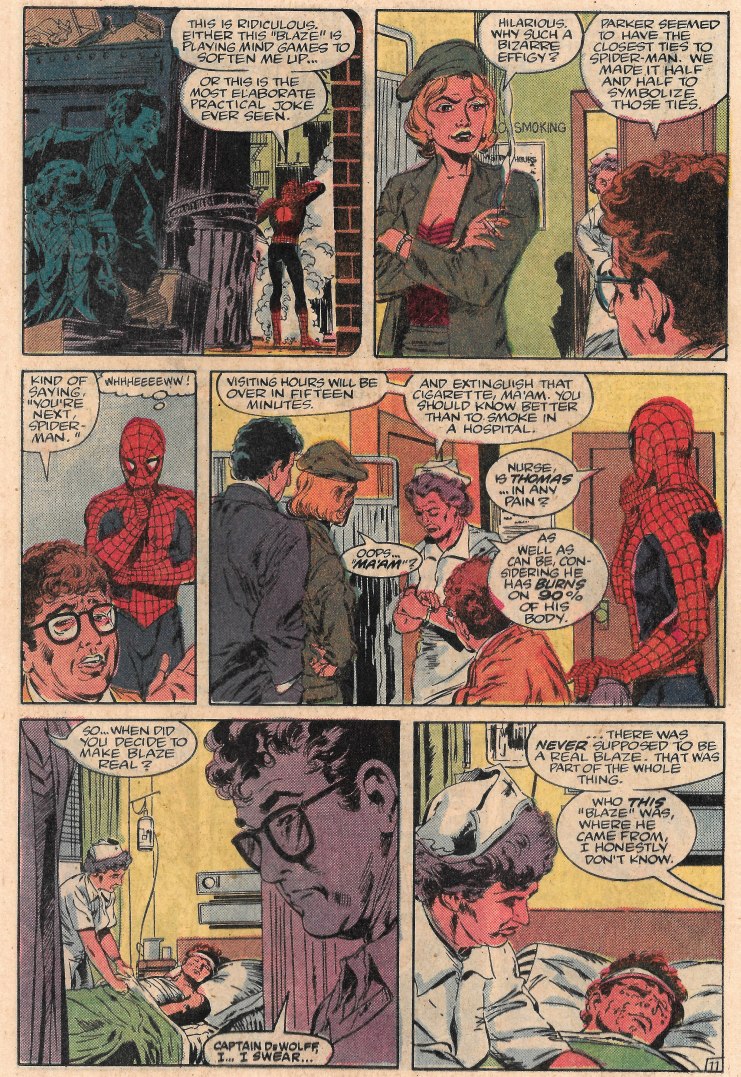 Seems someone or something became interested in the young men's prank and adopted the alias as their own. Next thing we know Spider-Man is attacked by the real Blaze in Duffy Square, with Barry and Ashely in the audience. He escapes but makes plans for a return appearance. 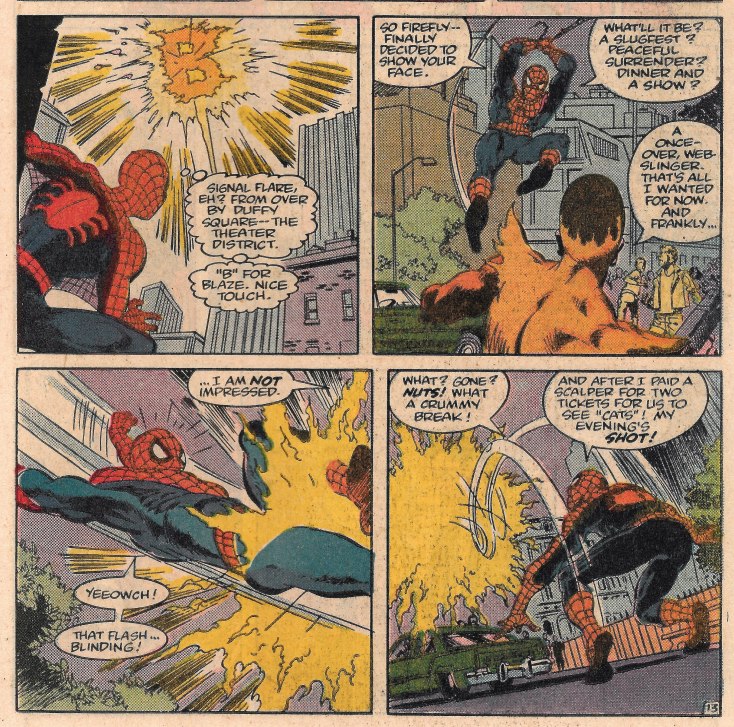 The Blaze sets all of them to arrive at the Arch at 10 PM. Barry and Ashley are told in their note that “Spidey Fries” 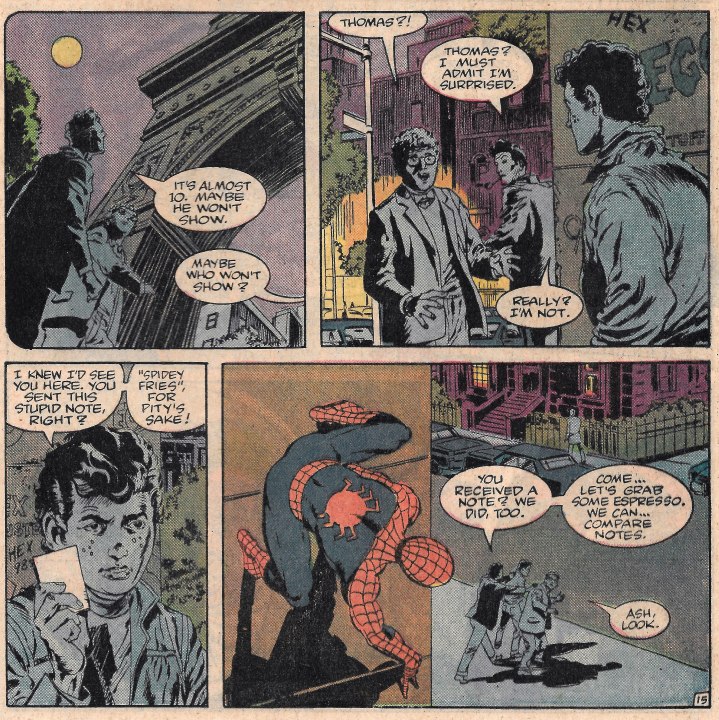 Whomever this is has done their homework, as Thomas arrives bearing an invite too. Spidey tries to get them to leave, but he is too late. The Blaze arrives, appearing to not only shoot fire, but to be able to control it. 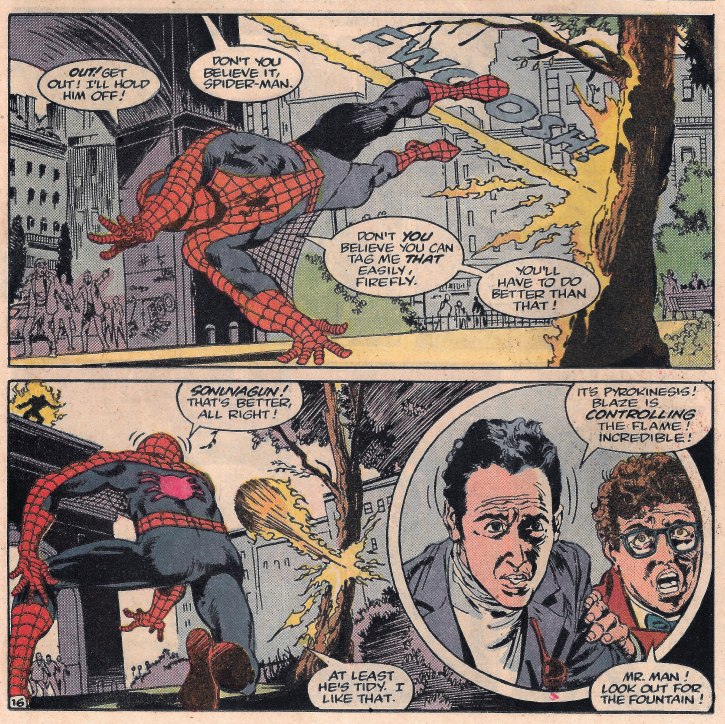 After some narrow escapes, Thomas can’t watch anymore. Eaten up with guilt, he attempts to save Spidey from The Blaze’s assault. 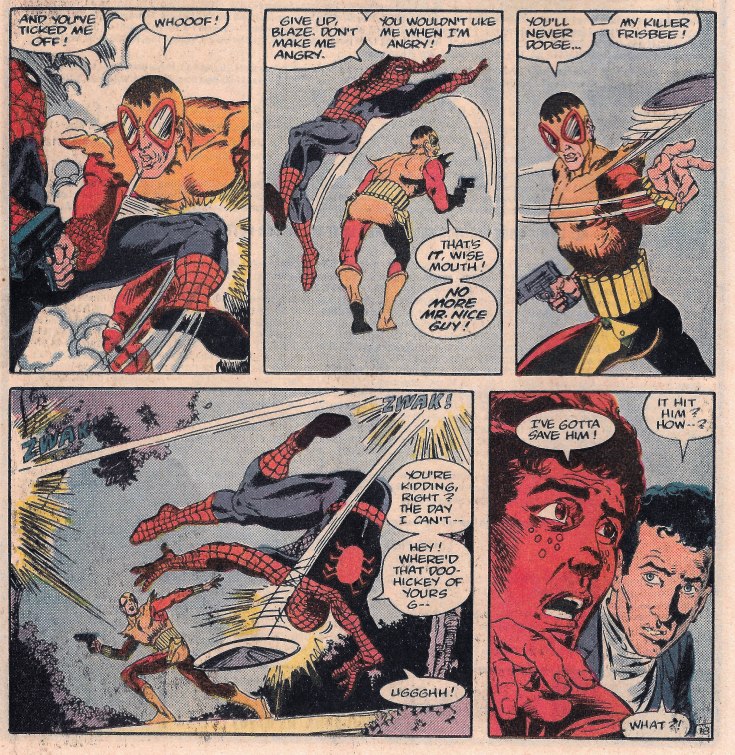 …and ends up sacrificing himself in the process 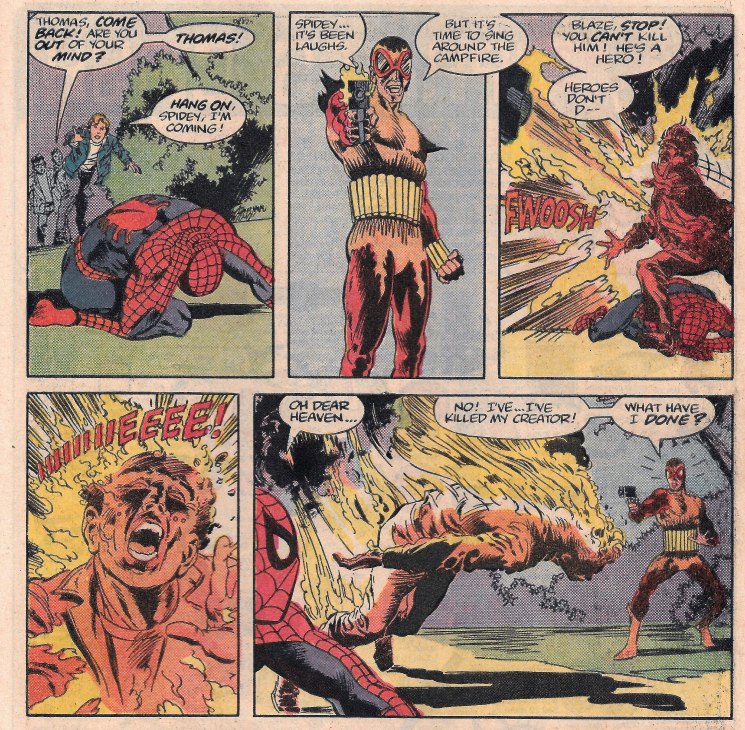 The Blaze escapes again and Spidey rushes Thomas to the hospital, which is where we opened this issue.

After this story, DeWolff lets the two students go and then asks Spidey an unorthodox question… 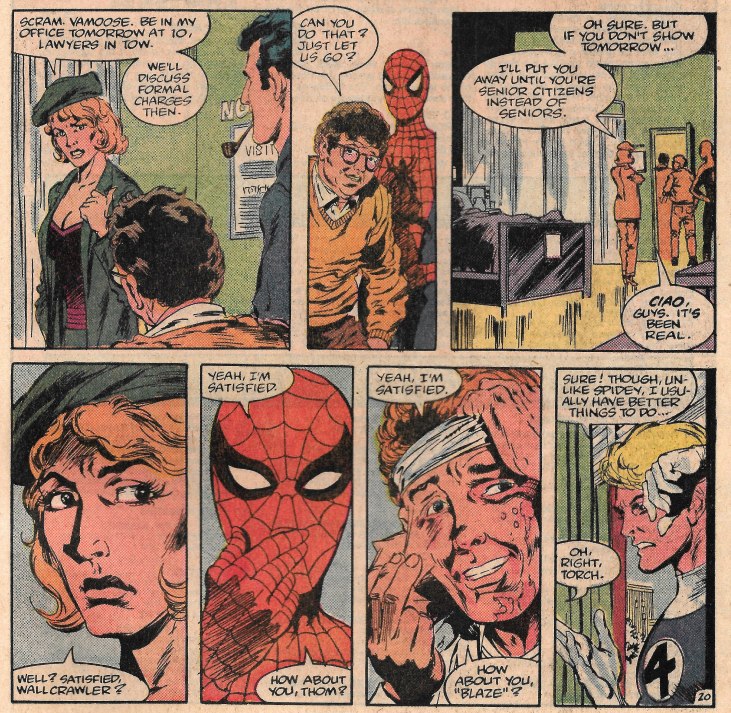 …wow! The “real” Blaze was a scam concocted by Thomas, Spider-Man and The Human Torch. Say whaaa?

So here’s EXACTLY how it went down: 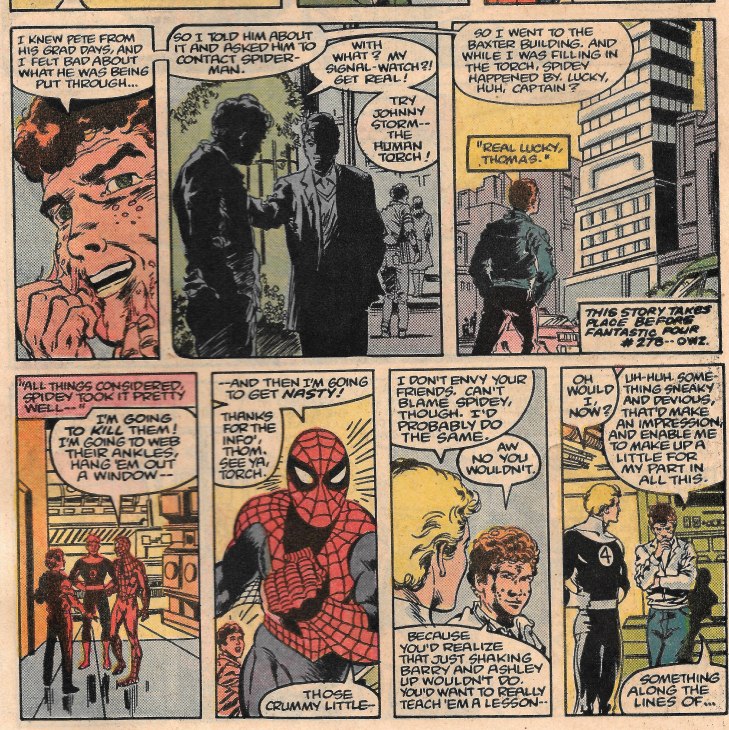 And then the Torch: 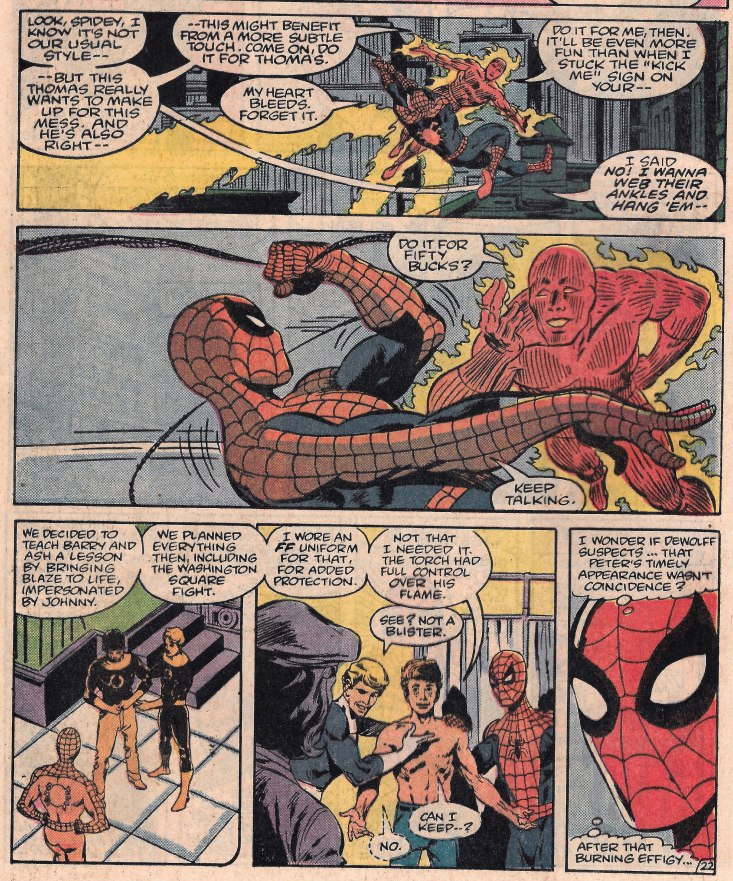 SUCH a good twist. When I saw the Blaze, I immediately expected Thomas was wearing the suit, but THIS turned out to be a much better and more logical ending. Not to mention how thrown I was when he showed up at The Blaze’s final battle.
It was so good I almost hated to spoil it. But that’s like every other PAD story, so just go buy his books. All of them.

And as for Ashley and Barry? 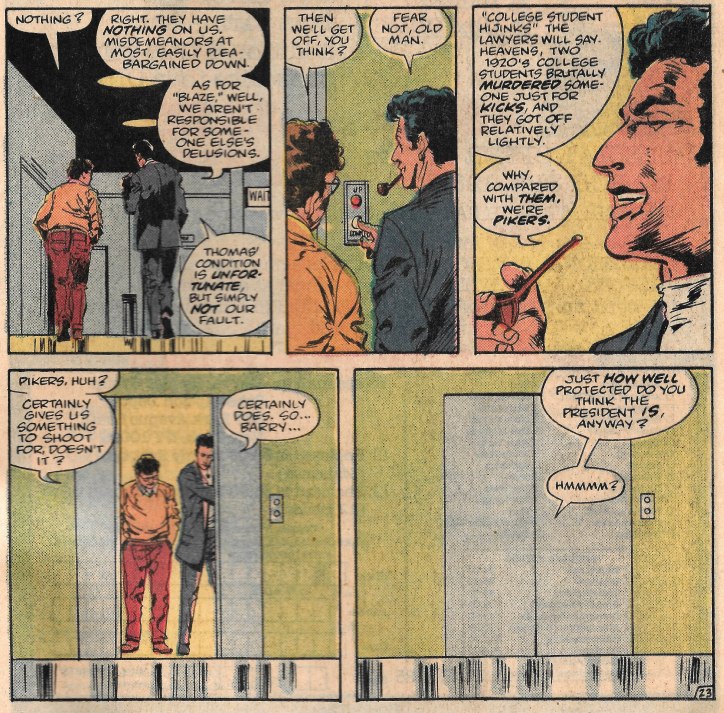 They will never learn, it seems…
Posted by SonOfCthulhu at 2:22 AM