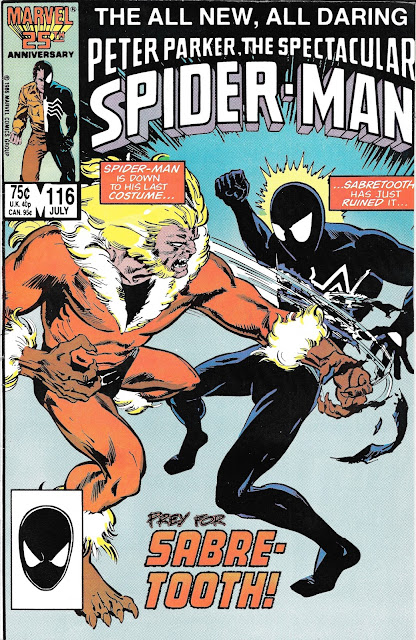 Plus a new twist in the Black Cat / Spidey break-up

We’ve cleared out some of the not-so-good Spider-Man issues from the Crapbox. I figure you deserve a treat. And I’m going to make that treat come from the “Spectacular” title, since it has taken a bit of a beating. There were some really stellar issues over in PPtSSM. It wasn’t just a cash grab by Marvel to milk more money from their most popular superhero.

Take this little gem, for example. We have Peter David on the keyboards, Rich Buckler warming up his #2 pencil, Bob McLeod filling his inkwell, Joe’s got the whole alphabet to play with and Mr Sharen’s got the deluxe box of 64 colors raring to go.

And if all those names don’t get your blood pumping, notice that our editor is none-other than Jim Owsley. Owsley performed both writing and editing duties at Marvel and he was excellent at both tasks. The books of his that have crossed my path through the crapbox are Fun with a capital “F”. He had long stints on Power Man and Iron Fist, Conan the Barbarian, and the Falcon miniseries by this time and would go on to pen many more stories for both DC and Marvel. During this phase, Owsley was the editor on all the Spider-Man titles.

And as was pointed out to me recently on Facebook, many of you may have read an Owsley book and not known it. In 1993 Owsley helped found Milestone Media, affiliated with DC for a score of years and during that transition he changed his name to Christopher Priest. He was recently tagged to write the Rebirth version of Deathstroke, a few issues of which I see peeking out of the Crapbox that now excite me more than I can say. Owsley/Priest is a great writer and an even better editor. Paired up with Peter David, I expect a bunch from this book and boy do I get it.

We begin with the Black Cat in trouble… 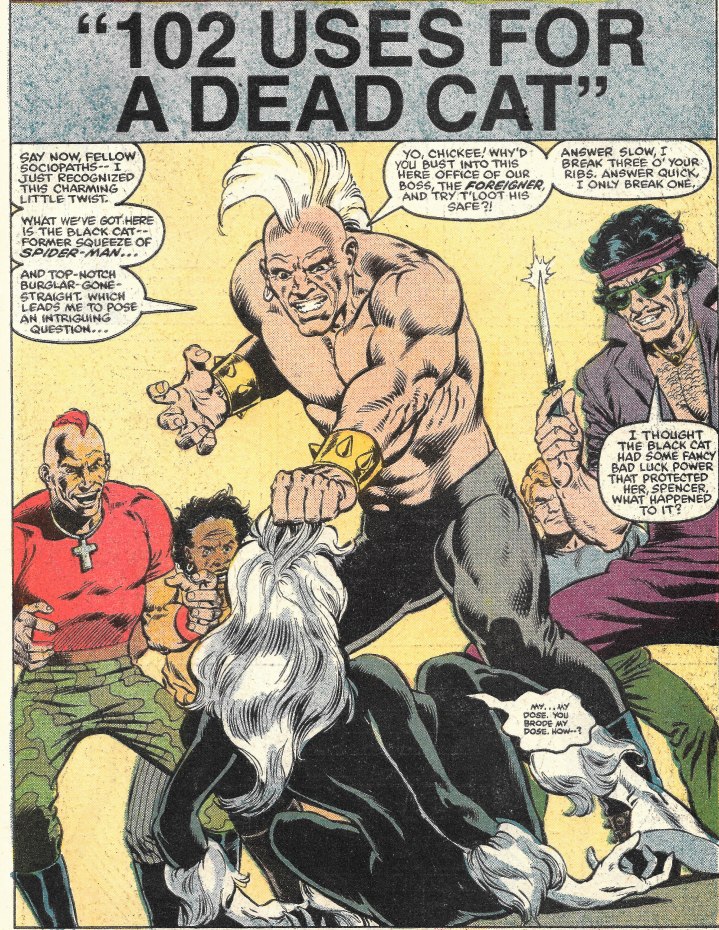 Meet the bad boys that are henchmen for one of the 80’s dastardly crime bosses, the Foreigner. Now I’m going to admit that I knew nothing about the Foreigner when I picked up this magazine, not having followed much of Spidey’s exploits until McFarlane took over doing the pencils. I left a huge fan of his. Not because he is a good guy, but because he is a good “bad guy.” You’ll find out in just a minute. 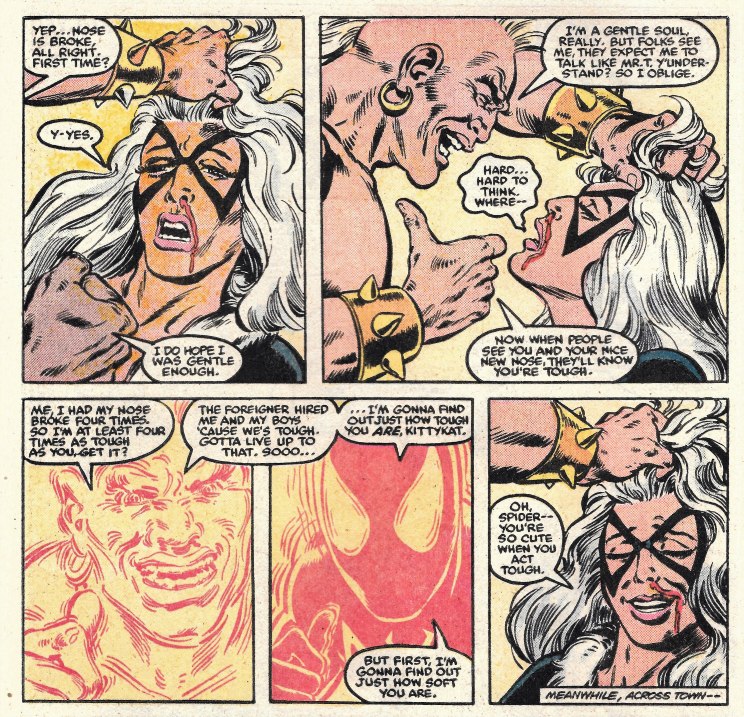 These toughs above have gotten the drop on the Black Cat, which should be near impossible with her bad luck powers. Unfortunately for Felicia, her powers appear to have left her. Peter Parker left her too. She’s facing these guys alone and at first things don’t look good, because sanity appears to have also fled. Not shaping up to be the Black Cat’s day. 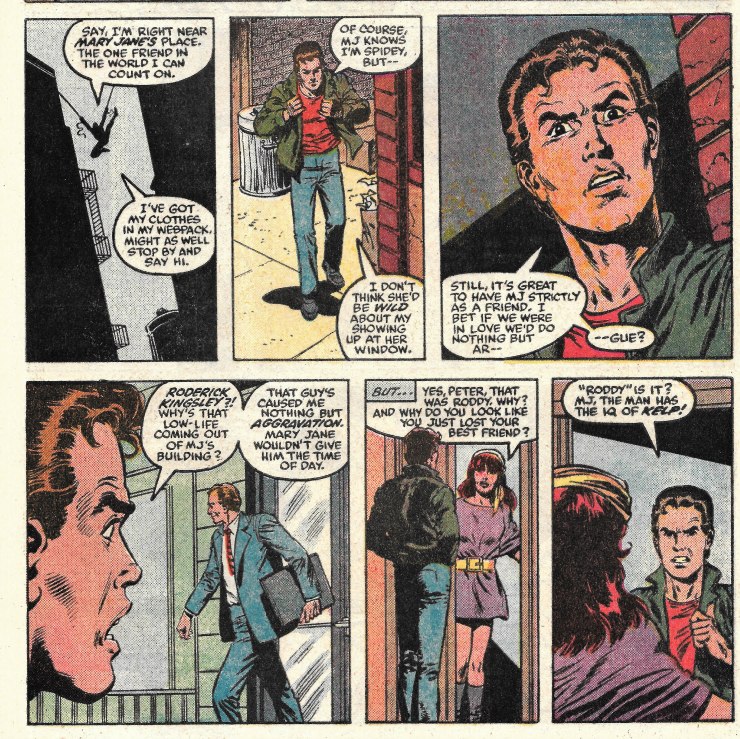 If you find yourself wondering where her bad luck powers went, look no further than Spider-Man. He had the Cat’s aura but had Doc Strange remove them in a Hex-orcism, so to speak. Now he worries about facing Felicia, his recent ex-girlfriend. So he decides to stop in on Mary Jane for some friendly advice and to blow off steam. What he encounters makes him blow off a very different kind of steam. 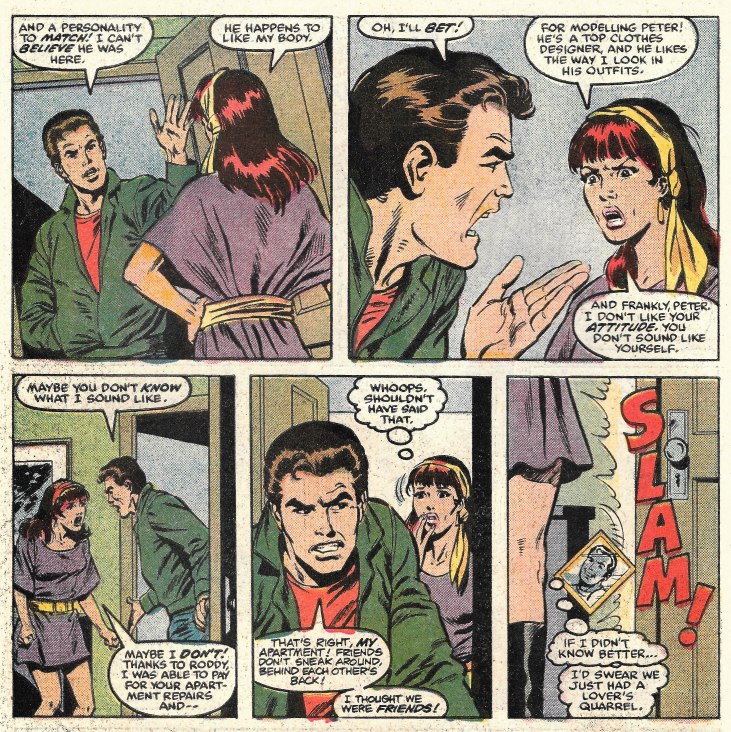 And while Parker and Mary Jane show how hot under the collar they can be, meet our villain of the hour: The Foreigner. He’s one very cool cucumber.

You might think that having a henchman wait patiently while you practice your aim only for the guy to realize what you were really doing was getting him to keep quiet so you can think would be kinda ballsy. 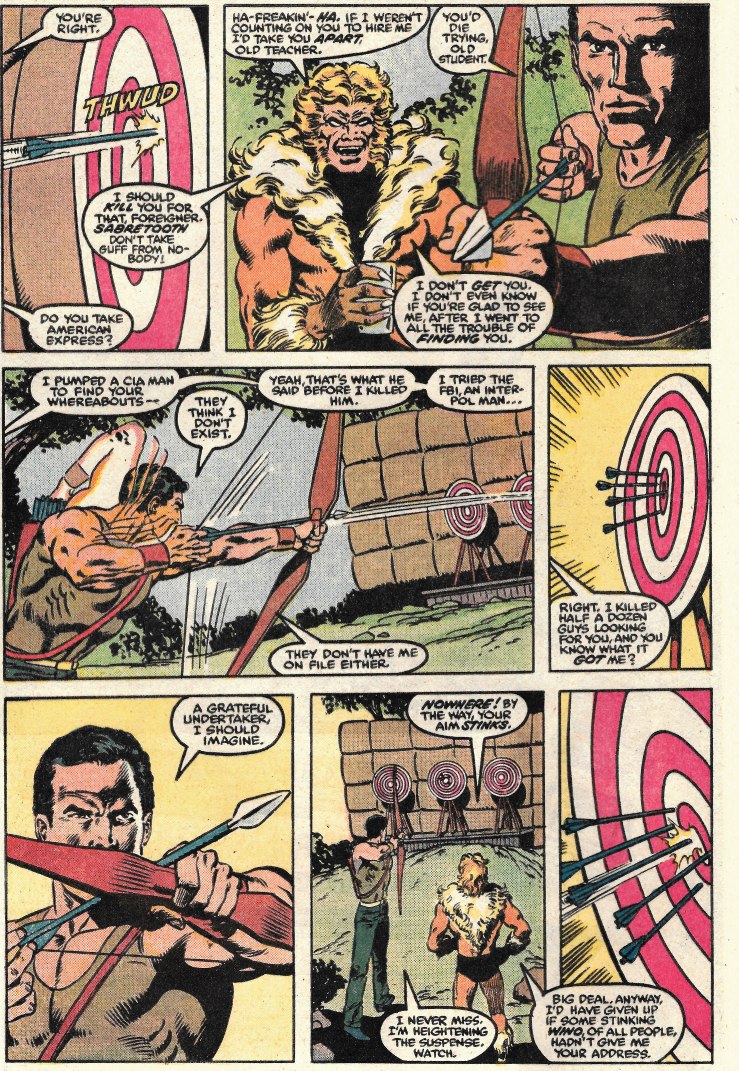 Wait until you find out the “henchman” is actually the killer mutant Sabretooth, in all his savage glory. I learned more about the Foreigner in these few panels than I did about the Kingpin in the entirety of the that prior PPtSSM issue I reviewed.

Especially when it turns out the wino who pointed Sabretooth toward finding his old teacher WAS the Foreigner in disguise. The idea being if he didn’t want to be found, he wouldn’t have been. 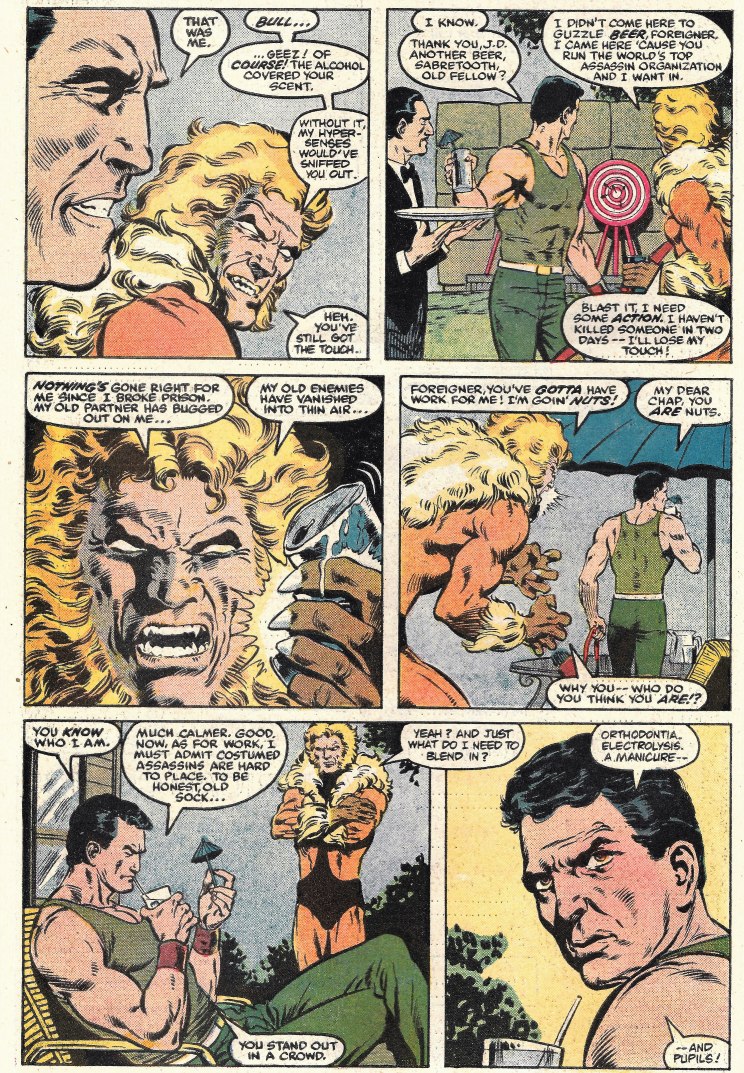 So this must have been after the X-Men vanished through the Siege Perilous and the loneliness has finally gotten to Sabretooth. And the Foreigner wins on that last bit about pupils. Love that tiny bit of forth wall breaking and his cool demeanor. Let’s check in on The Black Cat, shall we? 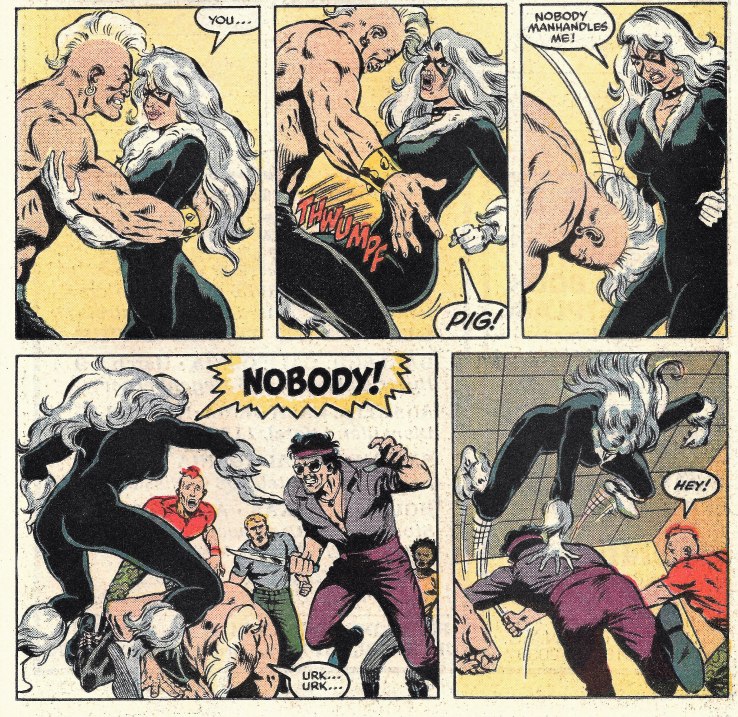 She’s come to her senses and starts beating the crap out of a room full of men, proving she’s got it even without her bad luck powers. 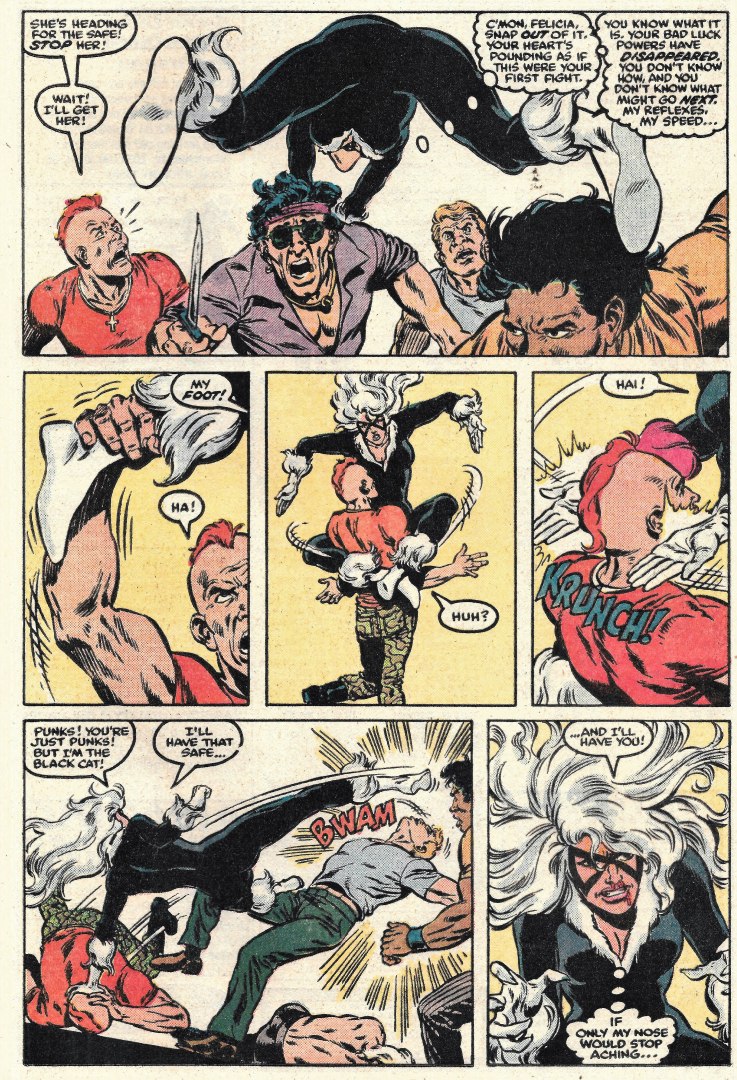 I mean seriously, she’s a force running on sheer willpower here. Now I’m in heaven. David and Buckler have made me fall in love with both the arch-villain and the hero’s ex-flame. This is what I read comic for: to get lost in the adventure and the unexpected turns a story can take. Where are we going next, gents? 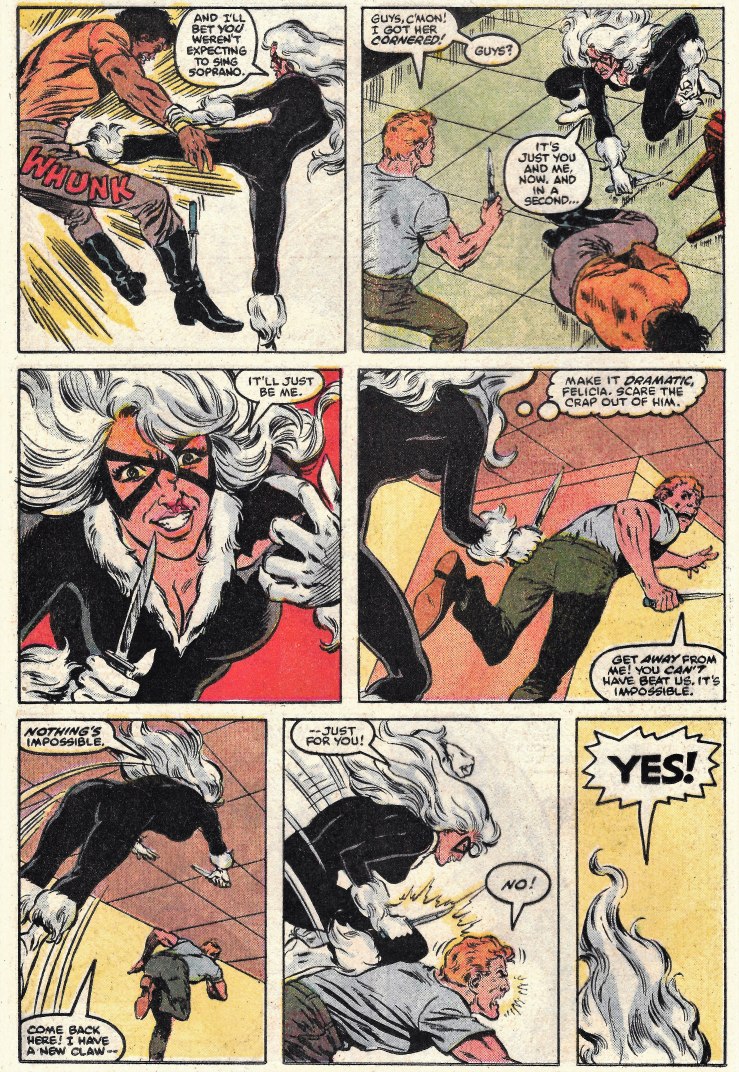 Well, first we have two more pages of Cat getting back at all these guys, ending with Mr. “No!” here. Just delicious! And then switch to… 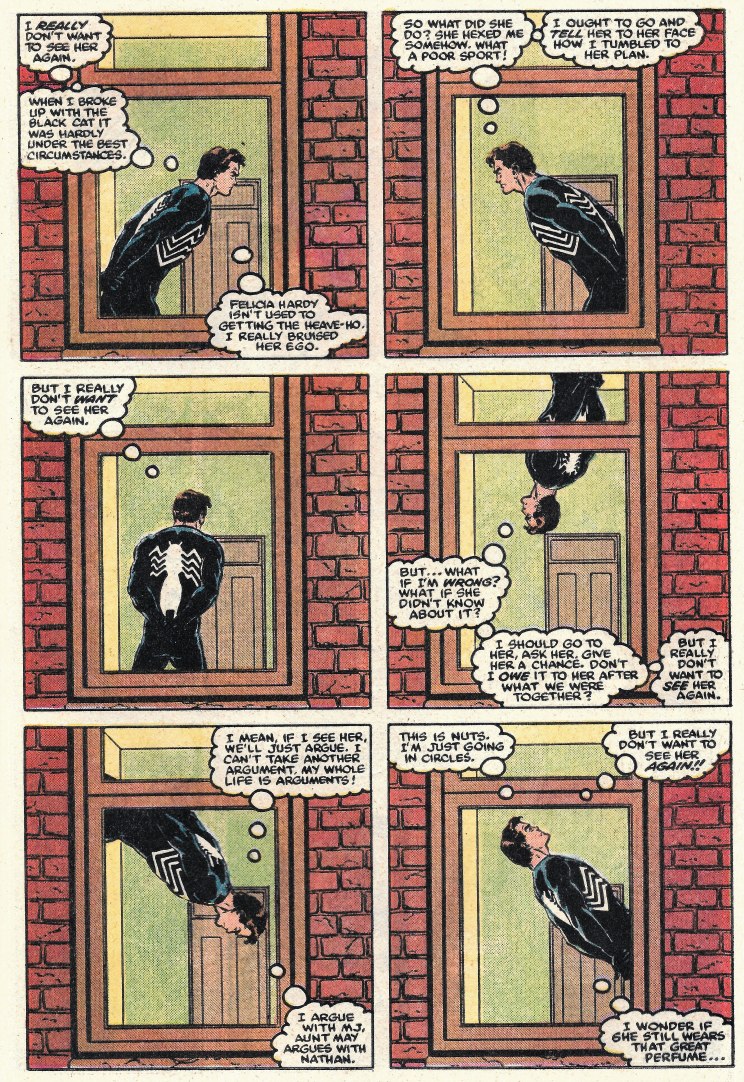 We get this page of Spider-Man worrying himself silly about seeing Felicia and doing it in a way only he can. Gosh, if that doesn’t make you giggle, I don’t know what will. No clue who came up with this, if it was David or Buckler, but to whichever of you dreamed this sequence up: YOU SIR, are my hero. 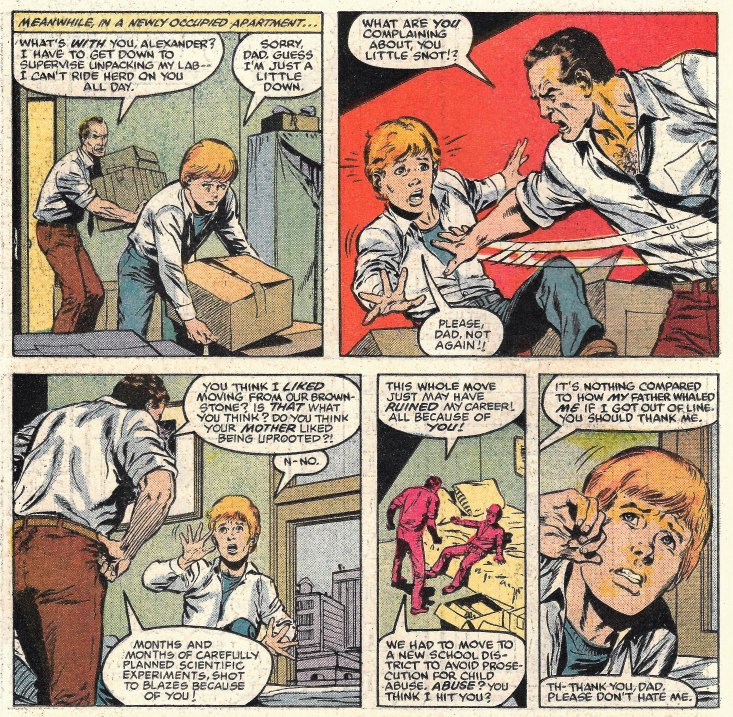 Then we get this abusive father-son relationship for a page (trust me, this gets good toward the end of the issue.) with a couple of panels where the kids hand starts to glow a bit like Iron Fist’s and then we are back. Back to the Foreigner about to show off that he has caught the Black Cat to Sabretooth. 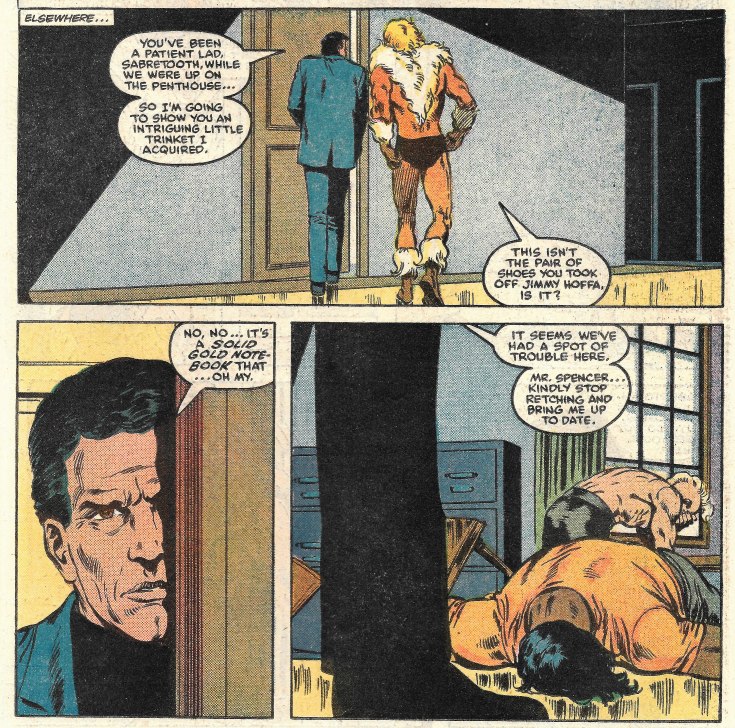 I guess that’s not happening. Love the cold, clinical and unemotional way the Foreigner approaches every situation. I’m definitely going bit diving to find more Amazing and PPtSSM titles in this era specifically for this reason. He’s just a good nemesis. 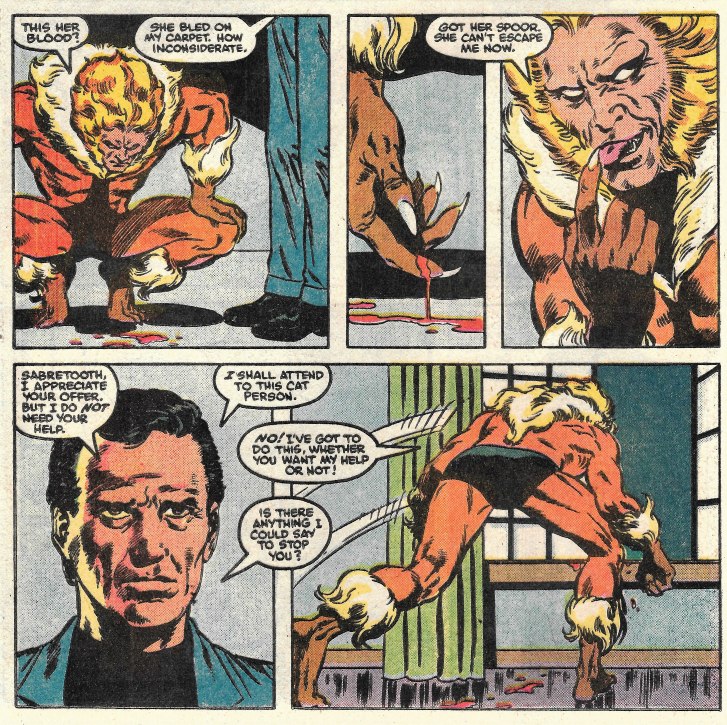 And while the Sabretooth presses the Foreigner to go after Felicia, the Foreigner turns down the help. It is hard to tell if he seriously doesn’t want the heat going after the Black Cat might bring or if he actually does want her back, but is manipulating Sabretooth into doing the deed but thinking it is his own idea. David implies the Foreigner may be playing a mental chess game here and I like the depth it adds to both characters.

And note that he doesn’t kill underlings that fail him like some mustache-twirling caricature. I want MORE of this character. 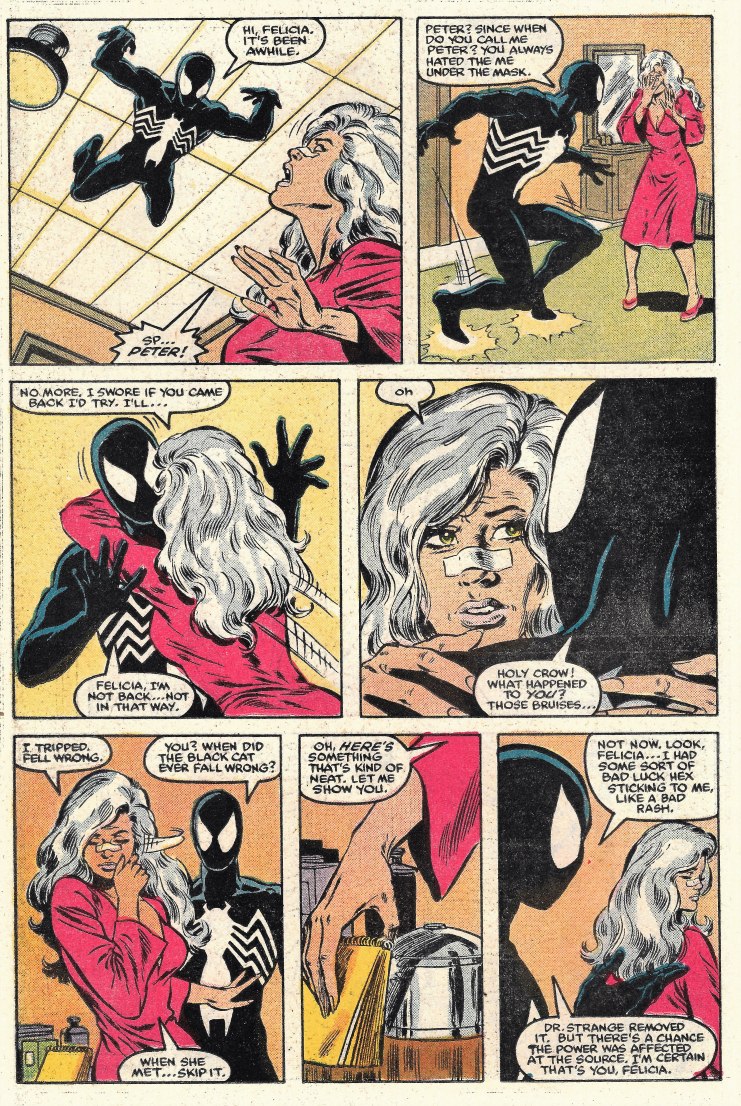 Meanwhile Peter arrives at a battered and bruised Felica Hardy’s apartment. There is a tender vulnerable moment in this that I don’t want to spoil. Every page there is something new to draw you further into the book.
Peter’s revelation riles Felicia up. She goes to strike him and he dodges, causing her to fall to the floor. I love this bit with the neighbors. 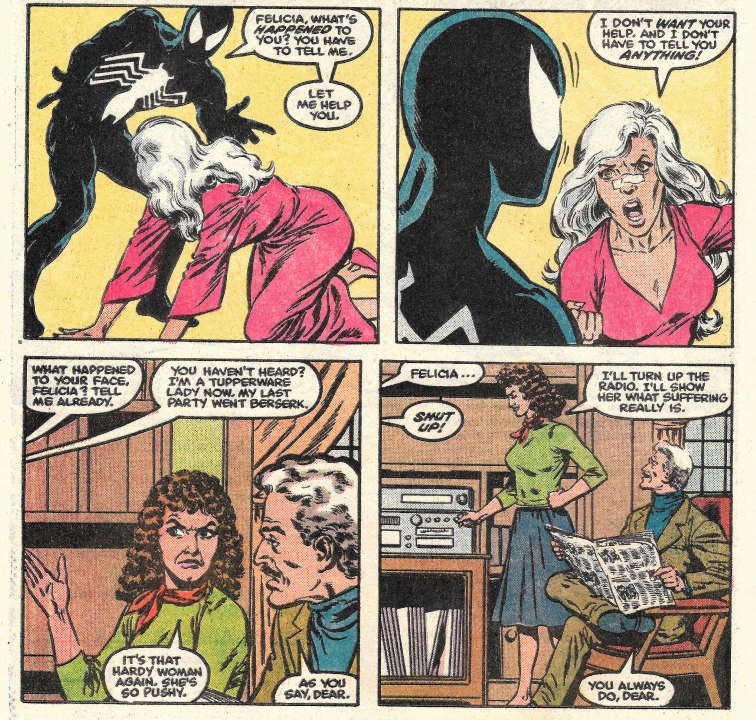 The fight rages, with both of them getting licks in. It gets so bad that Peter scoots out the nearest fire escape and it appears he’s leaving at a very inopportune, not to mention deadly, time. 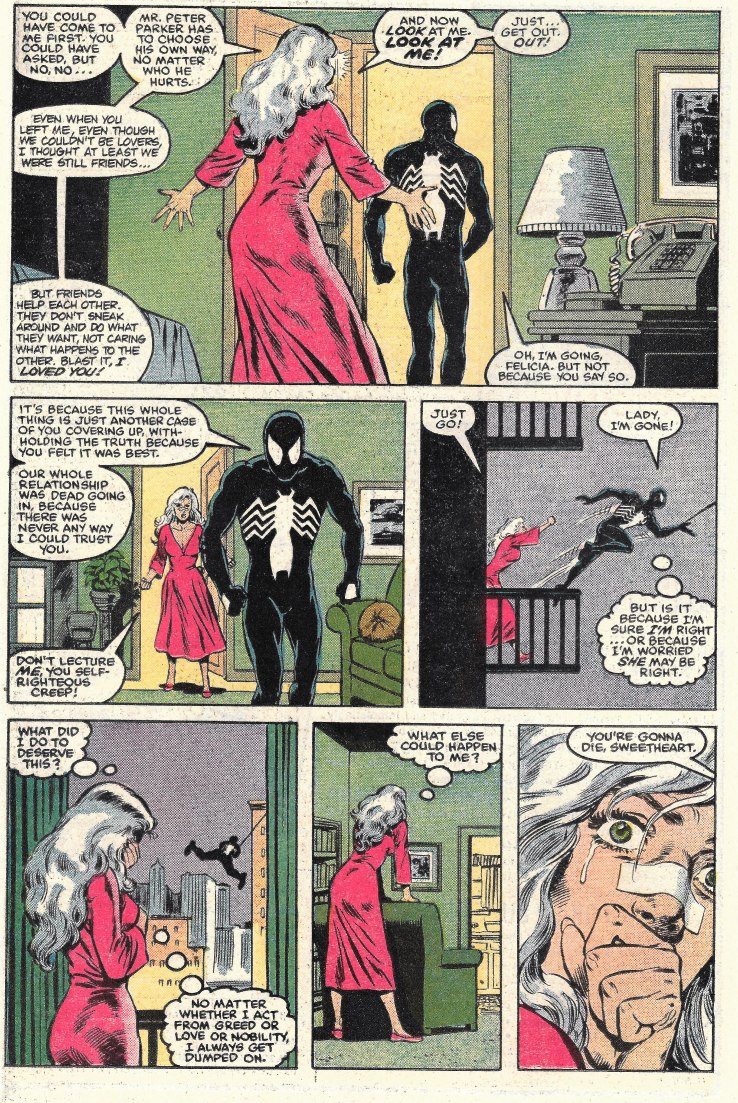 Sabretooth arrives and Felica prepares to give him a thrashing…that probably would result in her getting gutted since she is still weak from being held captive. Thankfully we don’t have to see that. 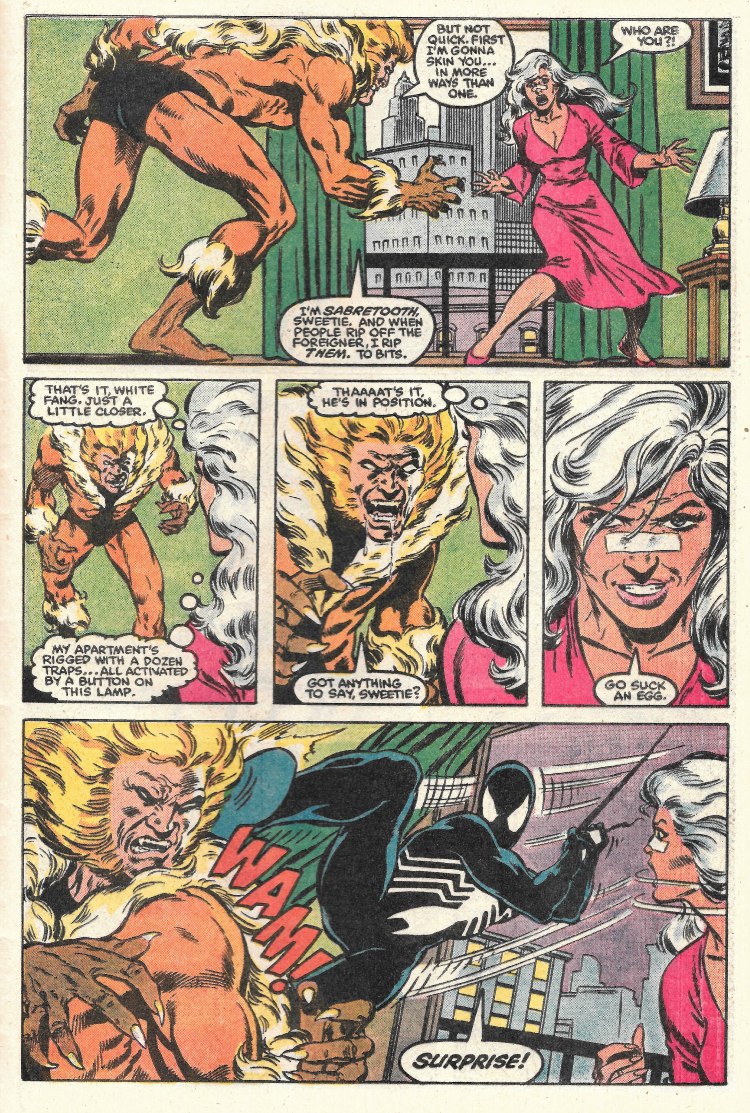 Felicia chews Spider-Man out for ruining her chance at setting off the traps she had trained on Sabretooth. As she is doing this Sabretooth changes targets, going after the bigger menace. Spider-Man leaps away, taking the fight out into the street. Someone ring that bell, shit is about to go down. 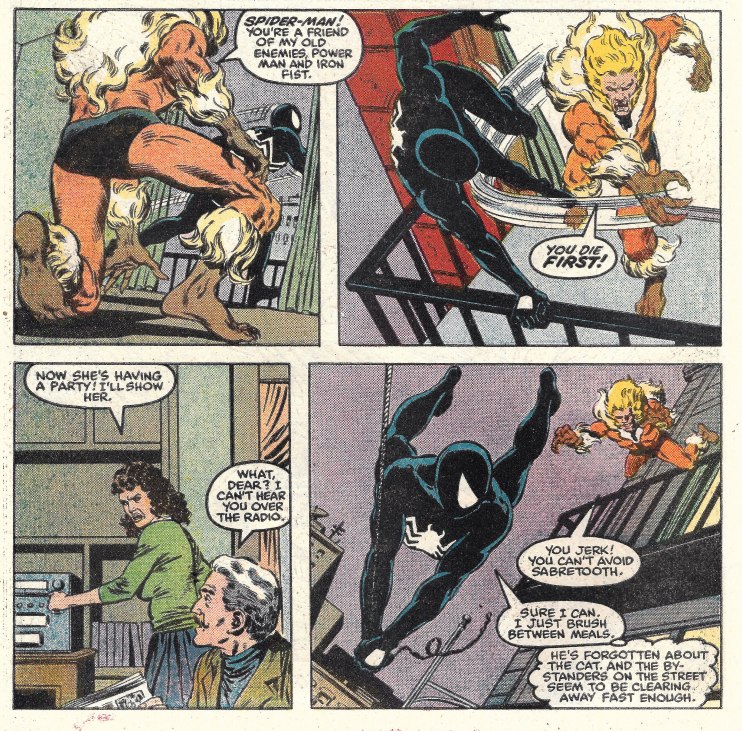 Parker seems a bit distracted by other business during this fight. Neat how Sabretooth was built up as a villain that Wolverine had to use all his concentration to fight and here Spidey looks at him as a costumed attraction. Looks like he paid for that thinking. 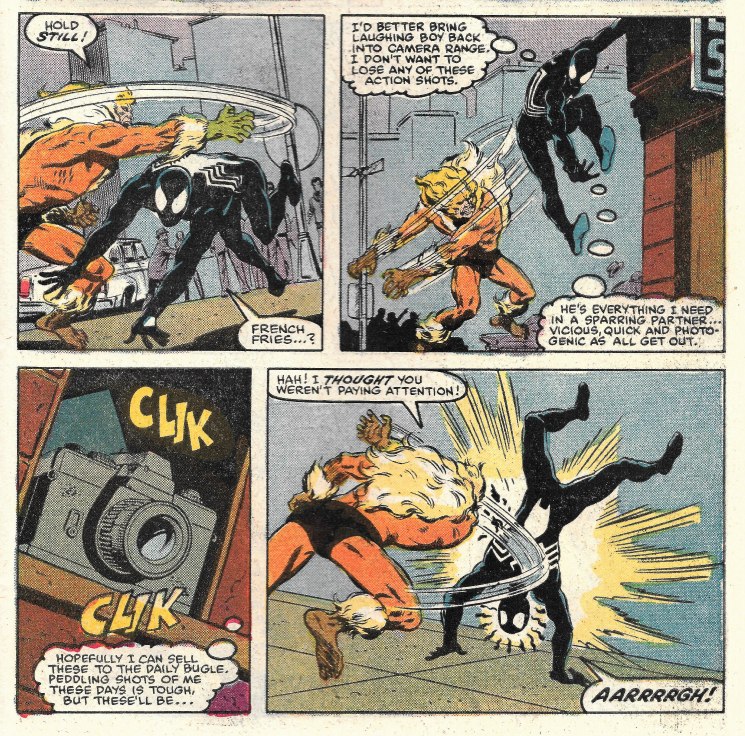 And Sabretooth performs a bit of a thoughtless act himself, ripping off both Spider-Man’s webs and the skin of his face. Yea-ouch! Wonder how long that takes to grow back? 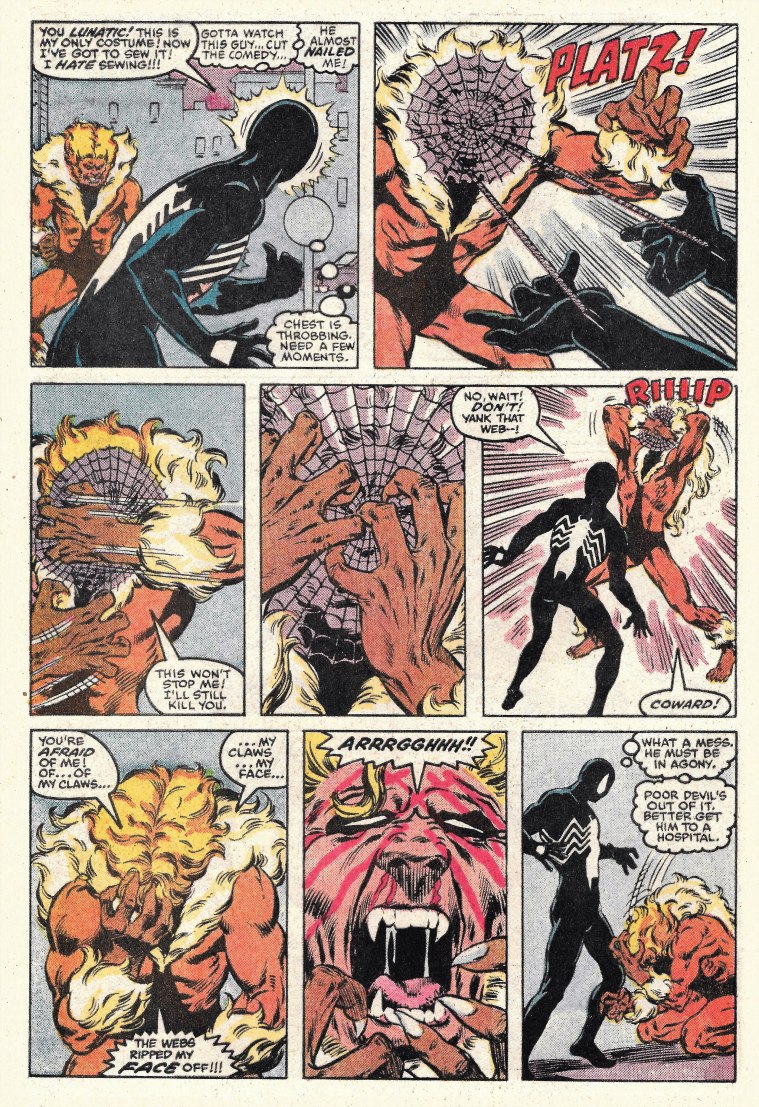 We end with Felica and Peter not speaking, the Foreigner vowing to get Felicia,... 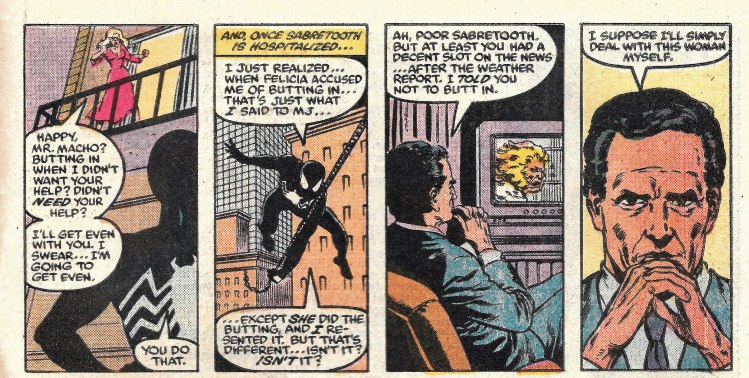 ...and that kid with the glowing hand? 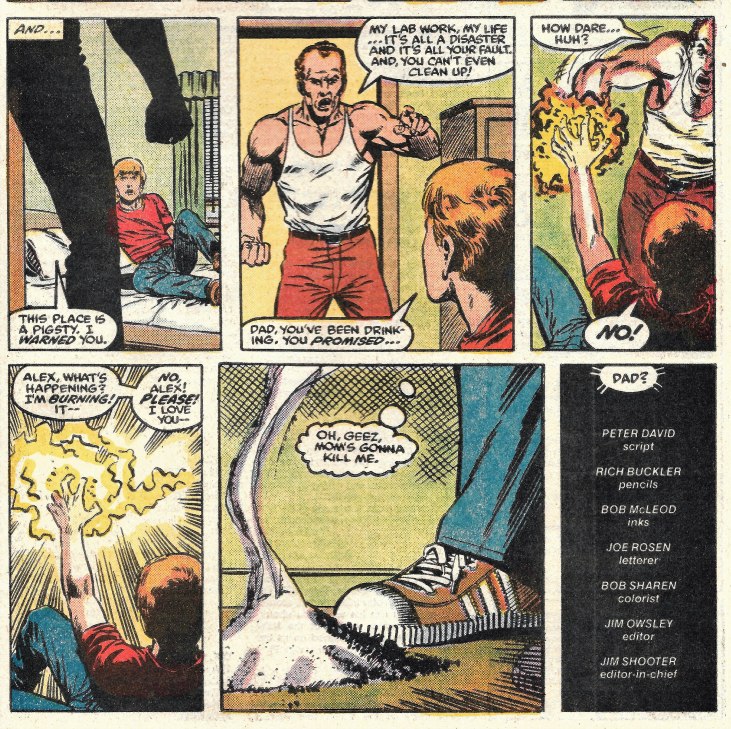 Loved this issue. Rich Buckler and Bob McLeod did such an excellent job with the art. Sharen proved his worth yet again on colors. I have no problems with Rosen’s work on lettering. David was his always amazing self when it comes to crafting a good story with intriguing characters. Loved it. Every page.

I think much of this praise is owed to Owsley too, who knows a good story when he sees one and could coax that out of his staff. That’s why I’m going to keep an eye out for any stuff he or Christopher Priest has touched. He did some work GL for DC on Action Comics Weekly and the first part of Green Lantern: Emerald Dawn. I’ve even see a few of his Quantum and Woody books floating around in the Crapbox.

Posted by SonOfCthulhu at 3:37 AM