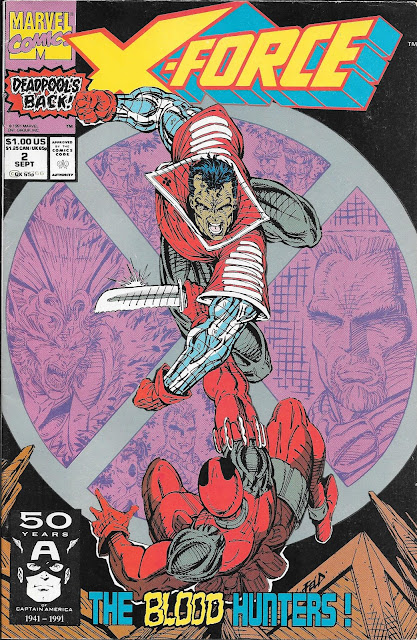 I remember Deadpool when he was unfunny and had poorly drawn feet
Ahh, Liefeld! My old friend. Have you ever heard of the Crapbox proverb that says revenge is dish that is best served with a side of chimichangas and an ice cold beverage? It is very spicy… **burb**… in *braaaap*... in the Crapbox...

I knew noshing on those wonderful Deadpool cakes would come back to bite me.

At some point I knew it would come to this. The point where I would have to deal with and perhaps begrudgingly acknowledge Liefeld's contributions to the Marvel canon. The two characters he created with a lasting impact. The two that I am certain he feels are his offerings of historical significance to the ages to come. The two his fanboys point to as if they legitimize Liefeld as a singular and unique talent.

I'm talking, of course, about Cable and Deadpool.

Well, sorta original- but not really. 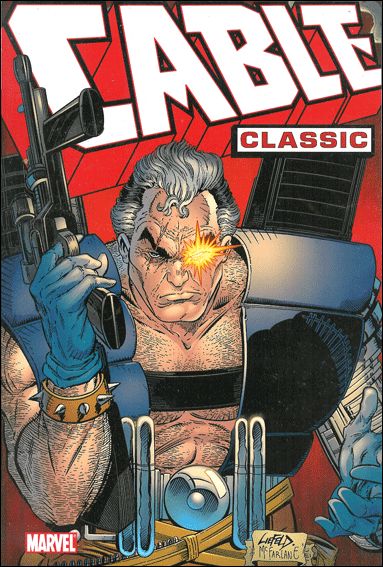 As opposed to "New Cable"

Cable, a mysterious man who first appeared in a single panel in New Mutants #86 and got fleshed out issue #87, became the leader of that merry band way back in 1990. The character owes his origins to writer Louise Simonson and artist/co-writer Rob Liefeld.

This is what Rob has to say about the creation of Cable:

"I was given a directive to create a new leader for the New Mutants. There was no name, no description besides a 'man of action', the opposite of Xavier. I created the look, the name, much of the history of the character. After I named him Cable, Bob suggested Quinn and Louise had Commander X."

I'm skeptical of that "much of the history" part of the above, since Cable's past is one of the most con-vo-fookin'-luted in the entire Marvel Universe. I'll go into all that in a later Crapbox, but suffice to say I don't believe for an instant that Liefeld knew who Cable would eventually turn out to be, nor his lineage.

Rob coasted a bunch on the physical aspect of him being a one-eyed mystery man who owned a bunch of future tech, most of which are badly rendered guns that make a used-up tube from a roll of Christmas wrapping paper look detailed in comparison. Also more functional.

Not to mention that Cable as presented in Liefeld's run is almost exactly the same as another character who had already existed in the Marvel universe for sixteen years. That character's name was Deathlok. 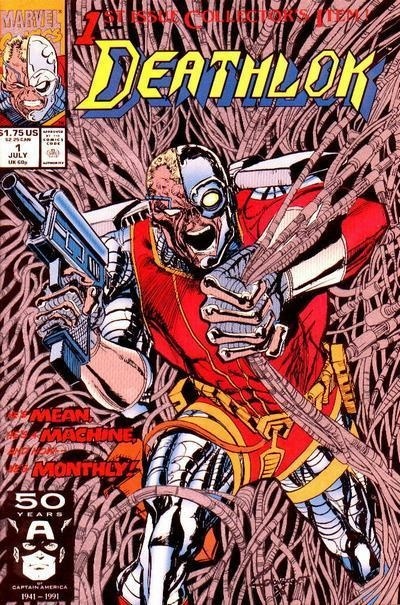 Rich Buckler and Doug Moench created him way back in Astonishing Tales #25. 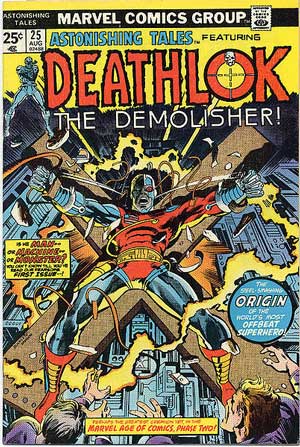 Note the physical similarities here: one eye, cyborg arm, scars on face, muscular, uses guns…Not convinced? How about this: Both of them are time-travelers from an apocalyptic future who have a computerized intelligence companion with whom they communicate telepathically. Yeah, that's a very convenient set of parallels.

Many would claim that the Cable that Liefeld created was very little more than a clone of the Deathlok mold with a less interesting backstory and personality. I would agree with them too. 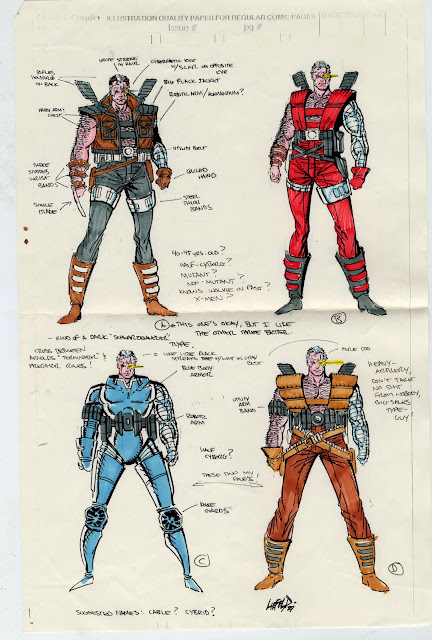 But enough about the leader of X-Force, what you came here for is DEADPOOL.

The Merc with a Mouth.

The Omnisexual with a penchant for Bea Arthur.

The foul-mouthed psychotic assassin with a heart full of chimichangas.

Deadpool. Possibly in the running for one of the top three spots in my List of Ten Most Favorite Marvel characters. In the right hands, an amazing character who can provide moments like THIS: 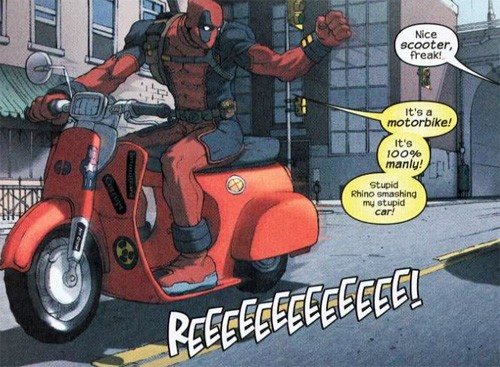 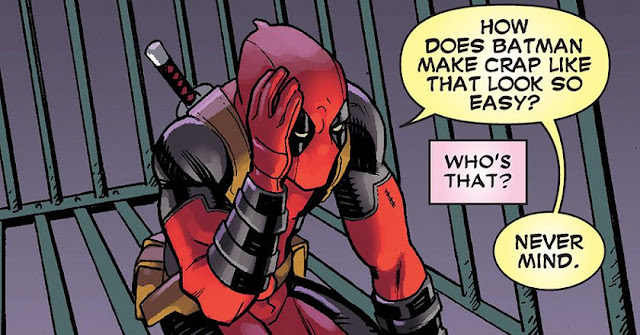 And who holds his own against Mavel's greatest quipster, turning him into the Abbott to his Costello: 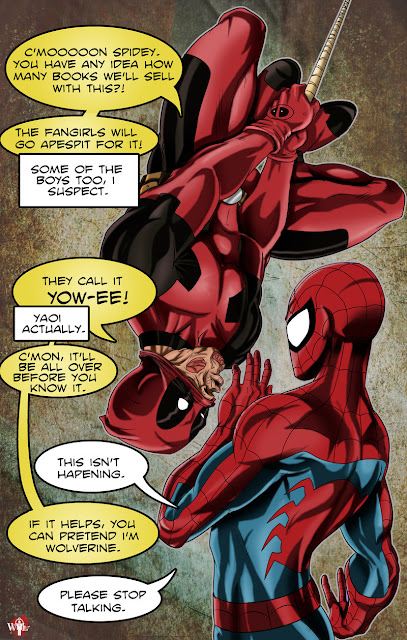 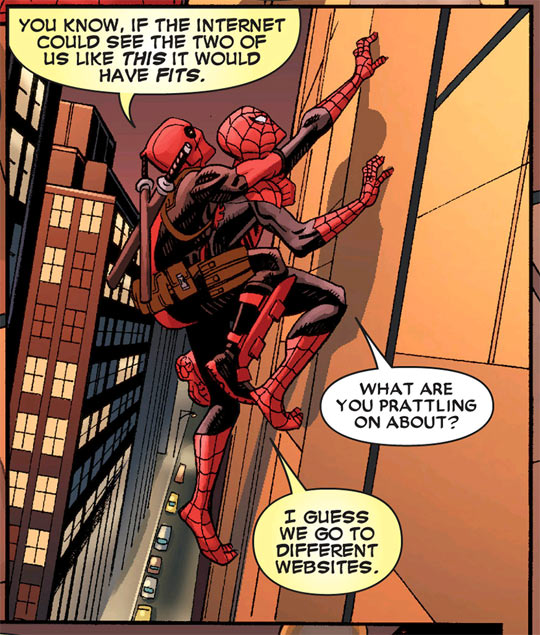 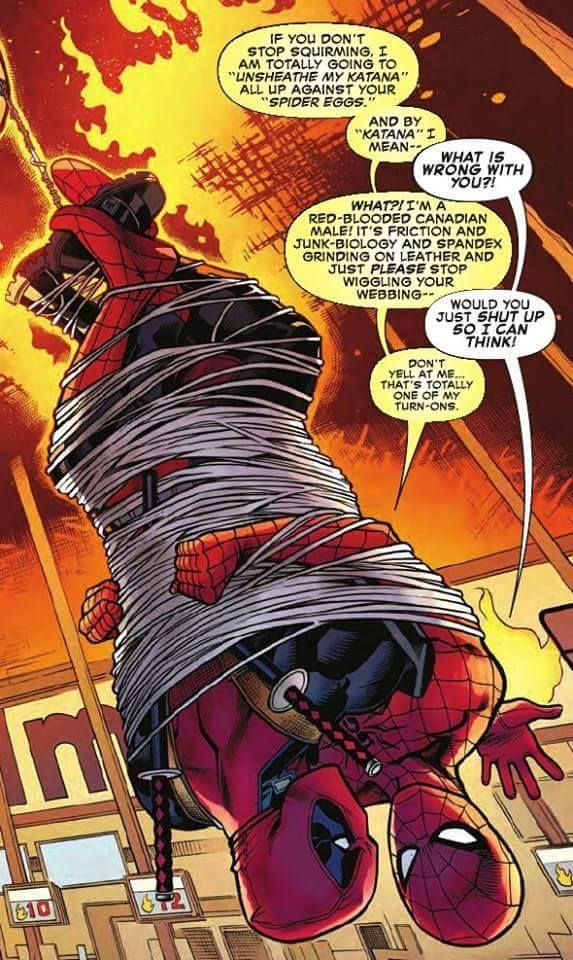 For one of the better encounters in the two's history, check out Mark Ginocchio over at Superior Spider-Talk HERE.


That's Deadpool for you.

Yeah, I have a soft spot for this particular mutant nutjob. And I have to thank Rob Liefeld for his creation. Sorry, I threw up a little when I said that last part.

Does this make Deadpool a unique character? No. According to New Mutants' scribe and co-creator Fabian Nicieza, Rob came up with the design and name while Nicieza came up with the character's speech and mannerisms.
And Rob's portion of this character is ALSO a rip off…

"Rob Liefeld, a fan of the Teen Titans comics, showed his new character to then writer Fabian Nicieza. Upon seeing the costume and noting his characteristics (killer with super agility), Nicieza contacted Liefeld, saying "this is Deathstroke from Teen Titans". Nicieza gave Deadpool the real name of "Wade Wilson" as an inside-joke to being "related" to "Slade Wilson", Deathstroke"

Now watch as you keel over in shock.

I'm going to give this one to Rob. We owe him a big debt of thanks for creating these two guys.

Because just like there is no truly original stories anymore, there aren't any truly original characters either. Everything that can be done, has been done by now. Rob borrowing character designs with some minor tweaking is not as important as what was done with those characters later.

Case in point, we'll see Rob rip off Superman and the Avengers before we finish his career path. Those endeavors don’t amount to anything. I have more Supreme and Youngblood copies in the Crapbox than I could read in a million years. They don't rate. No one really cares about them.

But they do care about Cable and Deadpool, for some reason.

It is dumb luck. A roll of the die that happens to pay off. A winning lotto ticket. There is no skill to this. It's just chance. Chance that involved someone taking a mediocre character beginning and rubbing the right kind of magic on it for it to become wildly popular.

Take THIS Deadpool story from X-Force #2. This is just a few appearances after his debut in New Mutants #98, a title that ended at issue 100 and then changed titles to X-Force. There is nothing more average than the way he is written here. Nicieza doesn't have a handle on him other than he should be annoying and talkative. However he runs into the trap of telling instead of showing. Barely evident are the ticks and traits we associate with Deadpool.

We begin with Kane, a brand new character, attacking Deadpool. 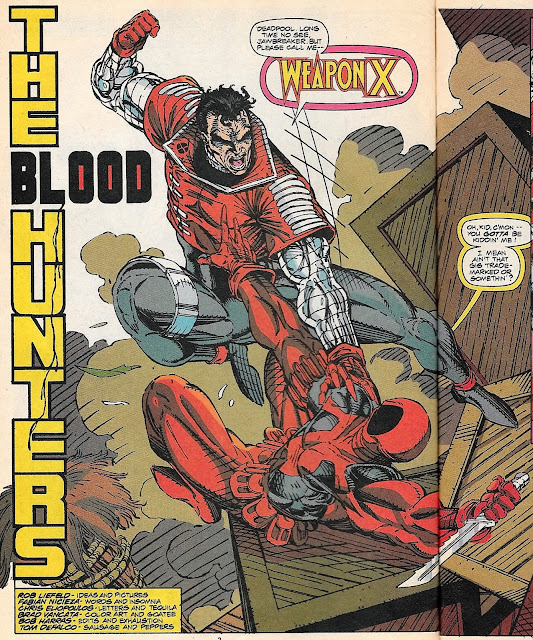 Herein lies one of the most troubling aspects of these issues of the New Mutants – X-Force arc: new character overload. The pages of this magazine exploded with new characters during this part of the run and none of them felt the least bit fleshed out. Deadpool included.

Deadpool is drawn with all the skill the early-20's Liefeld could bring to bear on him, which of course means feet like oblong triangles and awkward poses.
There's worse art coming for Cable and X-Force in the pages that follow, but let's deal with this altercation first. It takes up the first eleven pages of the issue, with lots of kicking and punching for no real purpose or reason.

Kane has been ordered to stop Toliver from receiving a shipment of top-secret software. Deadpool is riding shotgun on the delivery. They fight. Another character named Bridge shows up near the end of the fight to cap Deadpool. Bridge and Kane have history with Cable, and because of that history Bridge offers Kane a chance to help him bag the cyborg. Kane refuses and but loses Deadpool in the discussion.

That hints at a good story. It has mystery and intrigue and draws you in to these character's backstories. The sad part is that just like all the people in these books, their stories end up going pretty much nowhere for long stretches of time. Mostly, I believe, because the writers and editors really don't have a good grasp of what they want those origins to be.

But this fight between Kane and the D-man is humorless and flat, unless you are tickled by talk like this: 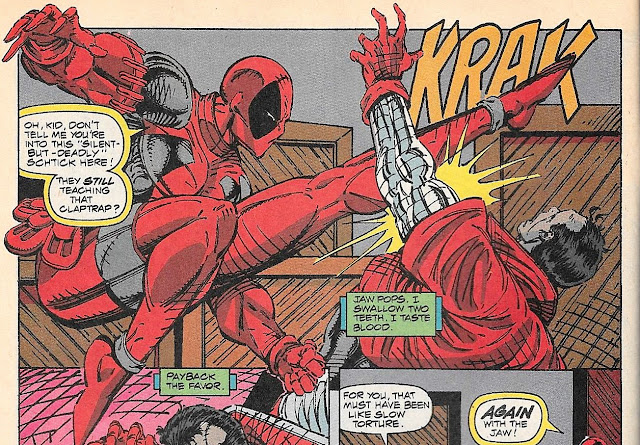 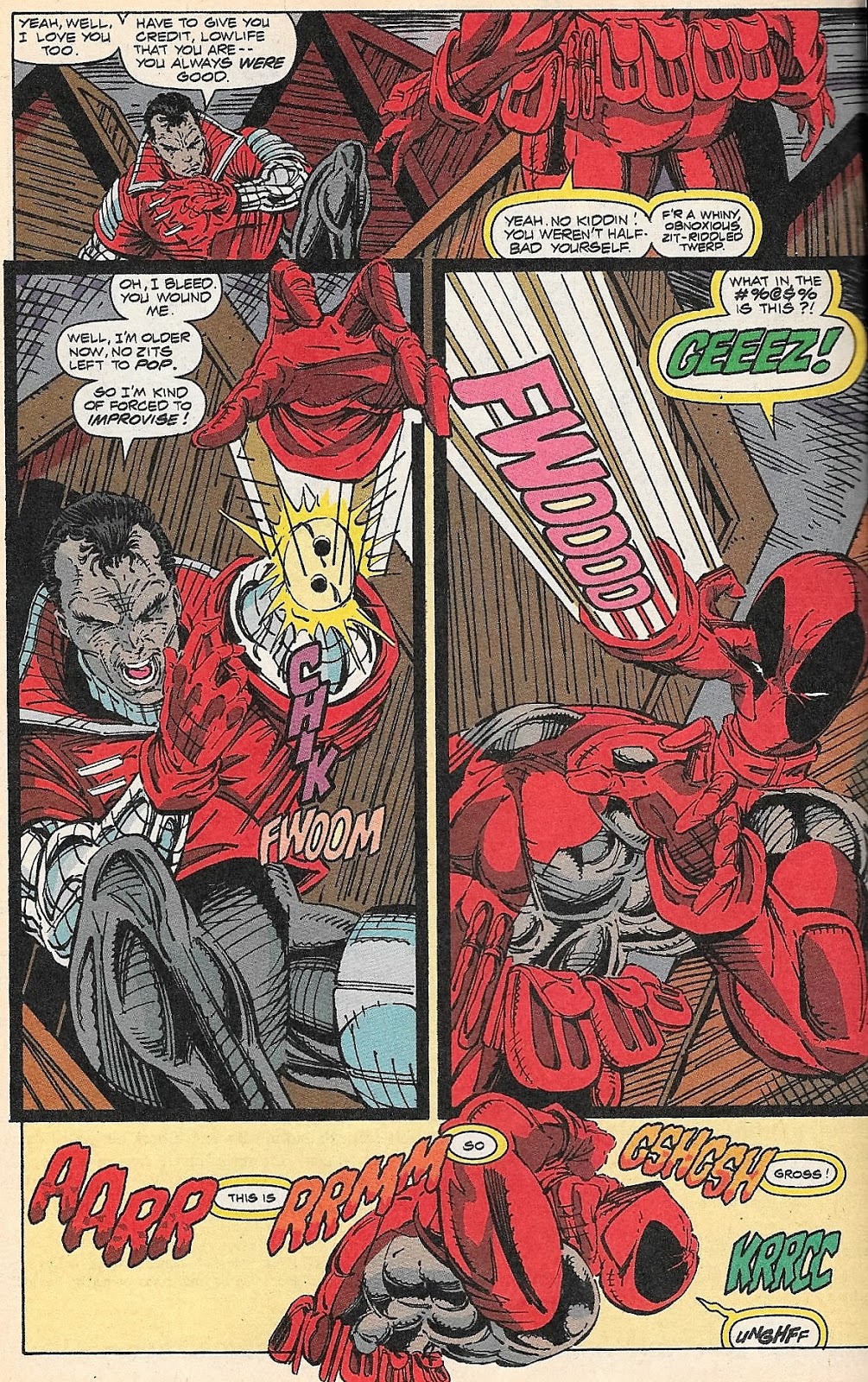 The dialogue is no different than any other overly-cocky, adolescent posturing found in the beginning Image books. It was only later that Deadpool would gain the wit and charm and adolescent humor that made battles like this fun and funny. Nicieza gave him a push in the right direction, but it didn’t amount to much until his ongoing with Joe Kelly and Ed McGuinness. That's when the character came into his own.

How is the rest of the book?

Cable and team face off in a TRAINING exercise against Feral, a werewolf woman who every time I see her makes me wish for the days of Rahne Sinclair's Wolfsbane. And I hated Wolfsbane, but even she was better developed as a character than Feral. Anyway, the exercise ends when Feral cuts loose and guts her teammate Cannonball. He is initally listed as "in critical condition" and then later feels fine. After having his guts ripped open. Just, you know, sitting up in bed having a normal conversation kind of feeling. A touch of evisceration, but latter I feel much better, thank you.

And don't tell me that is foreshortening. That's not how that works. 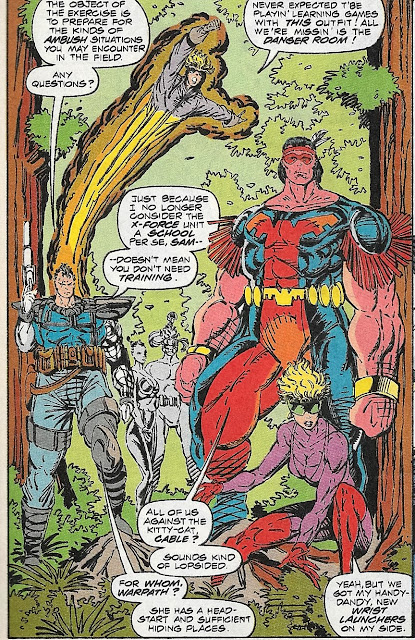 Notice there isn't one pair of fully rendered feet on any of these folks either.

Or check out this full-body shot of Cable and his teeny-tiny feet. Even his calves and ankles are weird. He's like an extra from that Rayne book with the horse-people. And I love the way his right hand is holding that gun thing. Rob just threw that rifle in afterwards when he couldn't figure out what to do with Cable's left arm.

Not that we can give Nicieza a free pass here. Try reading this with a straight face.

It is like they were up against a deadline and he just threw any old shit in there that sounded like it would work on the first read-through. "I am killing"… speaks for itself, don't it?

But the difficulties I have with the art trump the lameness of the story. Especially Cable's guns. They are just so incredibly bad. 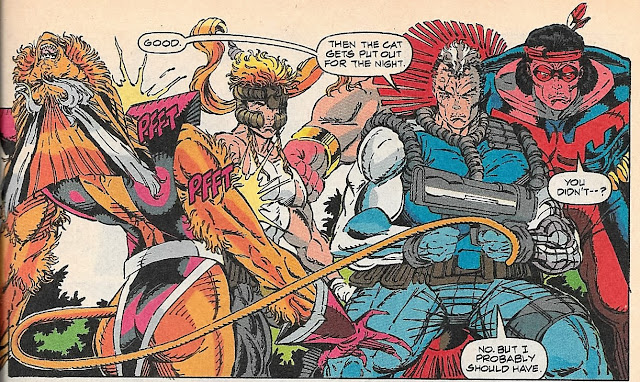 Look at that thing in Cable's hands and imagine using it to shoot at someone or something. The grips look like you would have to hold it at some uncomfortable angle and it looks less like a real gun and more like a rain gutter with handles attached.

I should mention Feral's hair before I go? I have no idea what it is supposed to look like in real life, but this weird, flat, "Bride-of-Frankenstein hairdoo run over by a steamroller" doesn't sit well with me. It is never drawn from the side so I can tell what the dimensions of her hair pile are and it messes with my head trying to understand how it would exist in 3D.

The worst is yet to come, as the next issue teaser takes one of the all-time great X-Men villains and does a number on him. 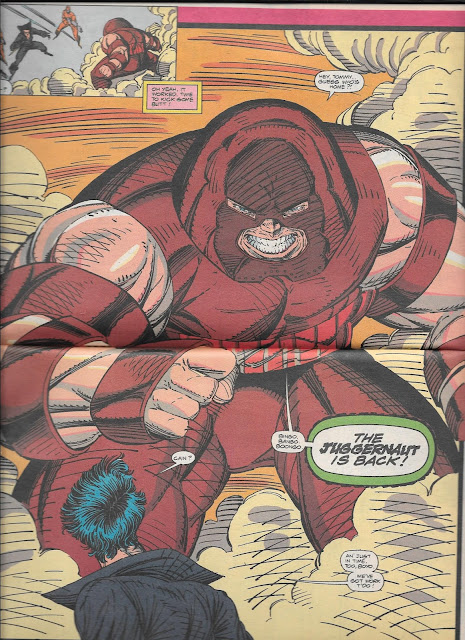 Juggy has always looked a bit out of proportion, but here he looks a bit like a giant midget. His torso is tiny, his thighs are the size of Mini Coopers and his crotch is the same length as his upper body. His feet were just too much for Rob to attempt. I'm glad he didn't.

Sadly I bought these at full price way back when. Finding copies in the Crapbox made me feel doubly bad.

I will say this, in the past few months I've joined a Facebook group whose members are all diehard Rob Liefeld fanatics. Rob even posts in it from time to time. It is so strange to see people post pictures of Brigade or Youngblood with captions of "Look at this great shot" or "Every time I see these in the discount bin, I have to pick up some more copies." The very idea that you would go to the discount bin and buy more copies of a Liefeld book you already own…

I'll let Deadpool sum up that idea for me.

Posted by SonOfCthulhu at 6:29 PM