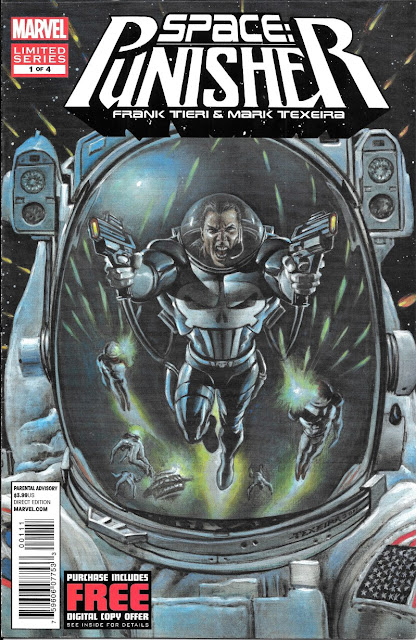 C'mon, Marvel! It's like you ain't even trying anymore

So 2012 appears to be the year that Marvel lost its damn mind. This book is called Space: Punisher, a four issue limited series that must have been someone's What If? story that someone gave growth hormones to. It is exactly what you would expect a Punisher story to be if you took random lines and added the words "in space!" to them.

Okay, it might be a tiny bit more clever than that, but not by much really. It starts with Frank Castle flying his space ship though space. Yes, it is THE Frank Castle. This is one of those alternate dimension things or mirror universes or whatevers, which Marvel has ground Punisher though. We've had future Punisher, cowboy Punisher, undead Punisher, etc. At least this one occurred way back in 2012 and hasn't been seen from since. I haven't really checked however and knowing Marvel's current marketing strategy of "make whatever sells mainstream," it might actually BE the current Marvel Comic Universe's Punisher.

Let's just get in, get out and be DONE.

We begin with Space Punisher having tracked one of the Intergalactic Mafia to the surface of a nearby planet. And yes, those are the exact terms used in the book. So he flies down to the surface in a very "Adam Strange" kind of way that kicks the book off with an epic space opera vibe. We have Mark Texeira doing the art chores, and I begrudgingly admit to more than a truckload full of love for his retro-painted take on things. It is a bit like The Punisher and a 50's sci-fi mag's pulp cover had a lovechild. 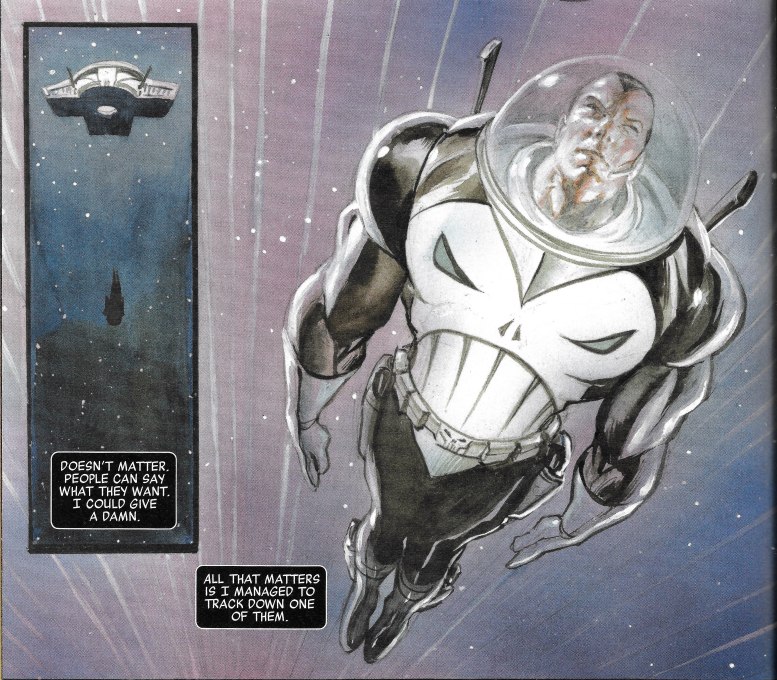 Anyhoo, Frank hacks up the local "flora" or "fauna" or whatever with his sci-fi laser sword only to discover the entire planet' surface is symbiote covered Brood. He is instantly surrounded. 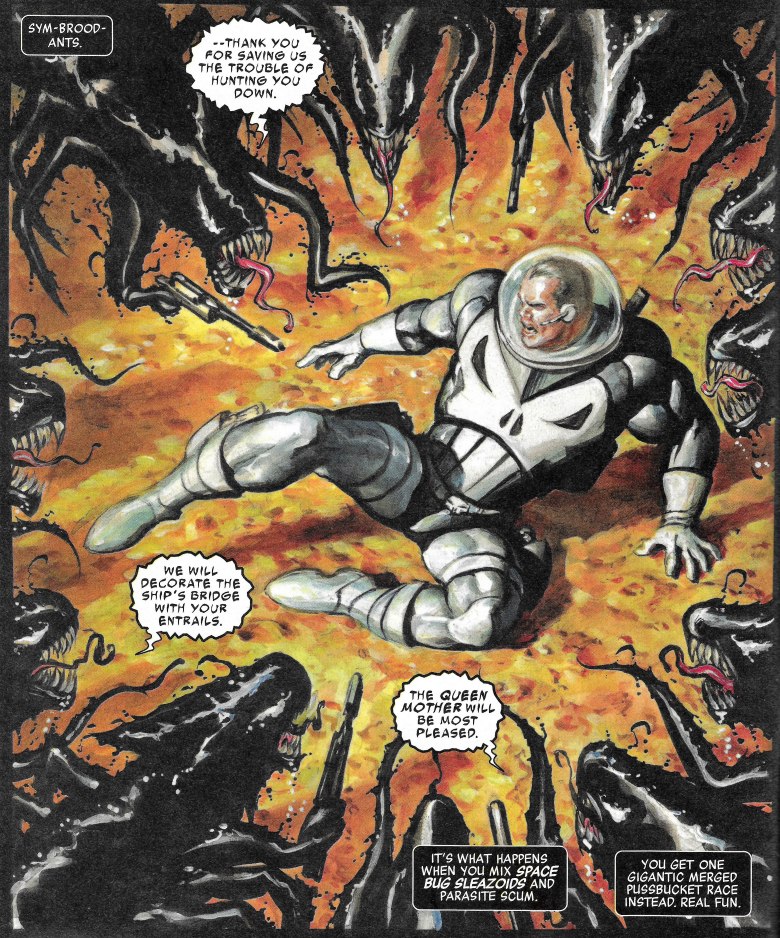 Luckily, Frankie came prepared. Another Frank, Frank Tieri to be exact, is filling the word balloons and making this one up as he goes along, and gosh darn it if by the end of the next two pages if I'm not buying into this whole concept. 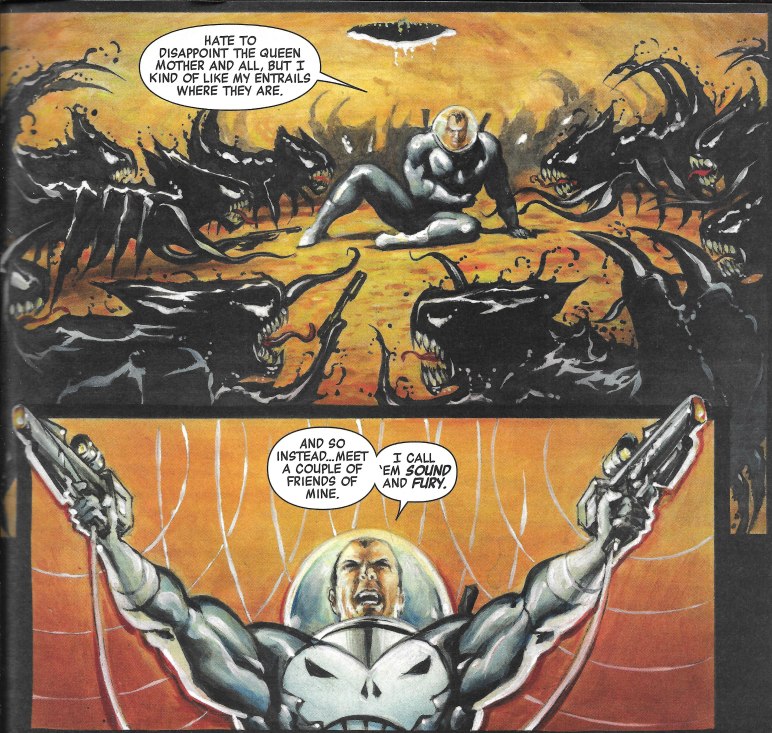 Sonics for the symbiotes and bullets for the Brood. So crazy and so outlandish that something like this is going to work, especially given how the Brood were completely surrounding Castle just  bit ago. Just impossible! 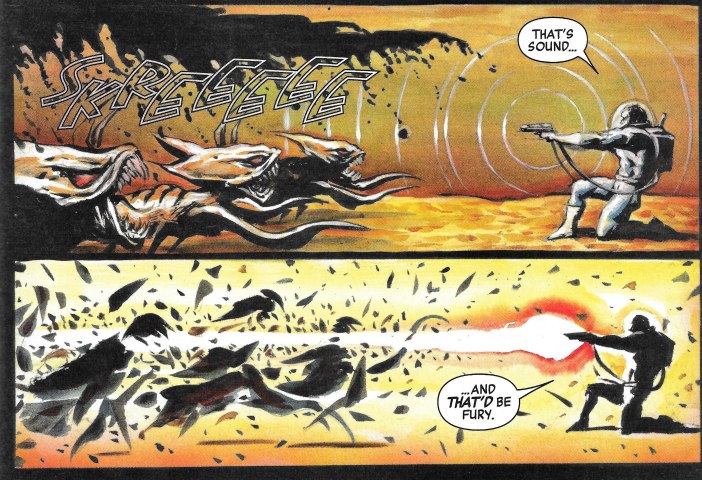 And I'm right. So Frank calls down "Chip", and I'm foolishly expecting his overweight buddy Microchip from the original Punisher series to send down some help… 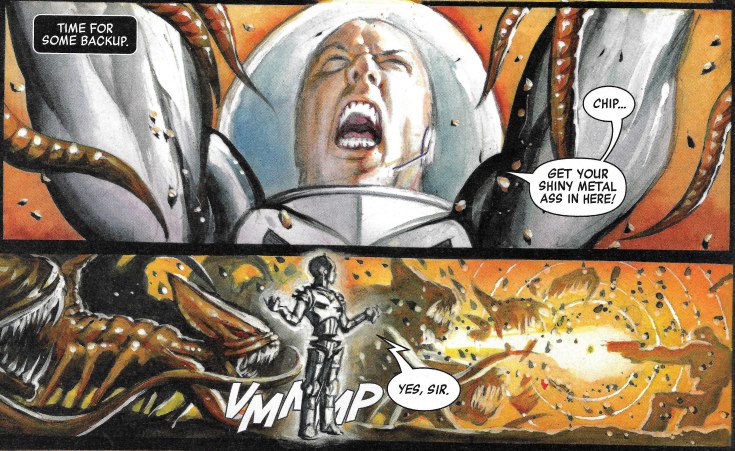 But what I get is this: Chip the silver-plated robotic android ass-kicker whose hands turn into dual mini-guns. 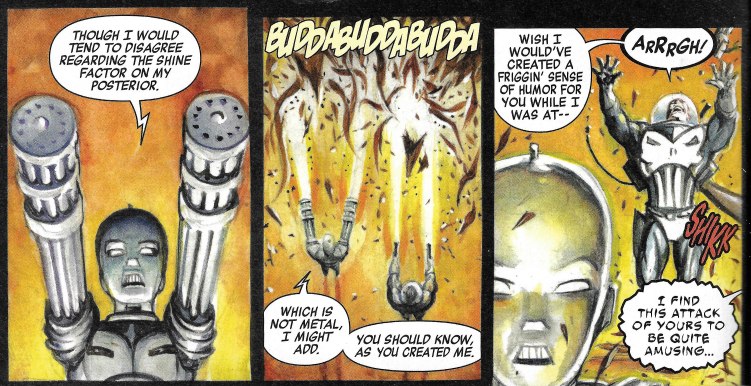 I admit at this point I gave up. I just did. I put down my air of smug superiority and jaded cynicism….and I just went with it. Yes, it is an INSANE concept. And yes, it could seem to spit in the face of all those deadly serious Punisher tales from the late 80's. Sure, it's not the way I want people to remember the character…not as some parody of the action icon. BUT it is a lot of fun, and enjoyment is the name of the game here.

So as Castle starts swinging his lightsaber like a regular Luke-Skywalker-Jedi-wannabe, Chip gets the intel on who might know their next series of targets. And as they beam back to their ship, they leave the brood a little present in the form of a bomb that destroys the nest and perhaps the entire planet. 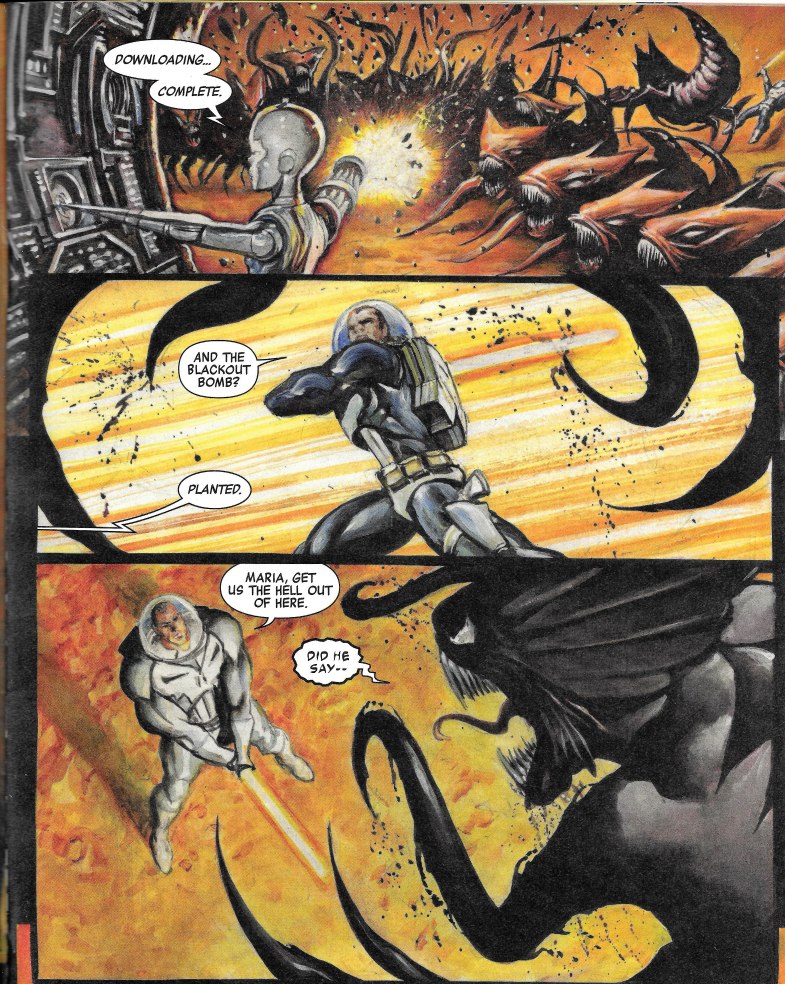 (and yes, I noticed that he named his ship "Maria", Frank's wife's name in the original series)

Then they travel to a space bar to extract the info from the man mentioned in the download. Here they are walking in all bad-ass and stuff. 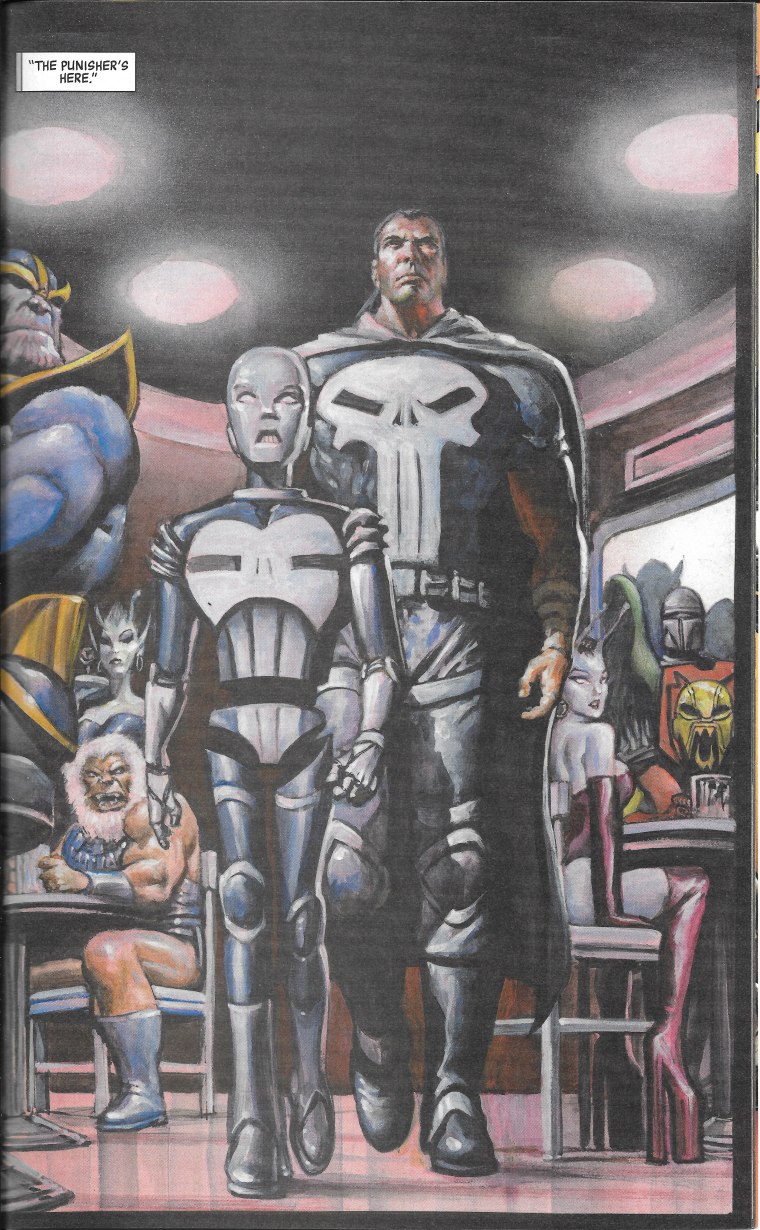 Guy's name is Barracuda and Frank doesn't think much of manhandling him. So Barracuda's "Rhino-like" stand in protests Frank's touching of his boss in a rough manner… 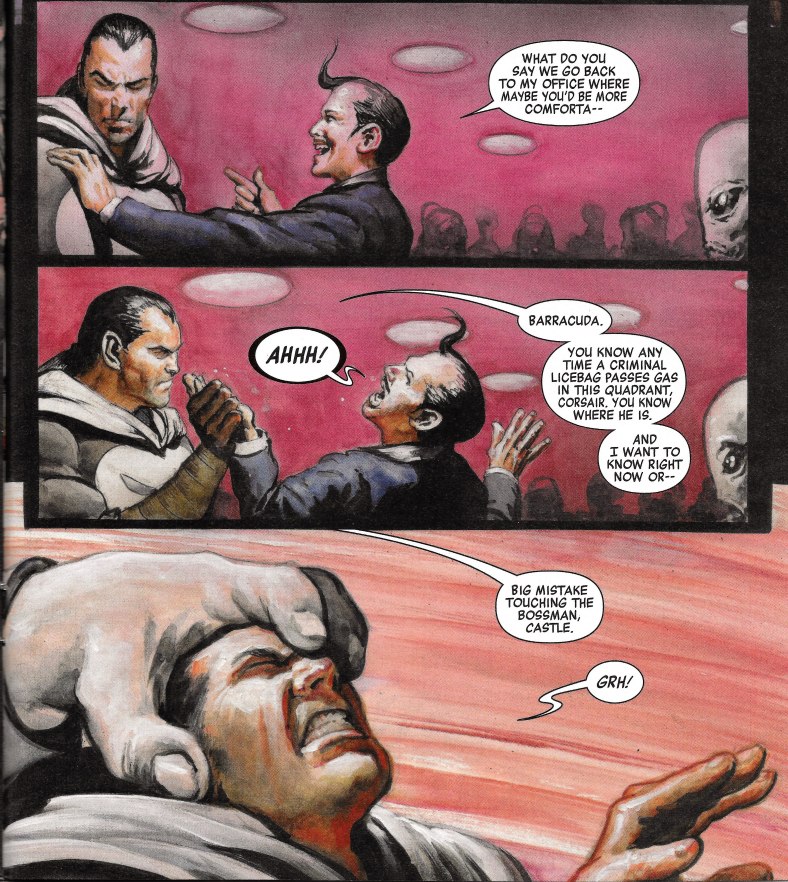 …and Frank's ship fries Rhino-horn in is boots. Or rather everything BUT his boots. 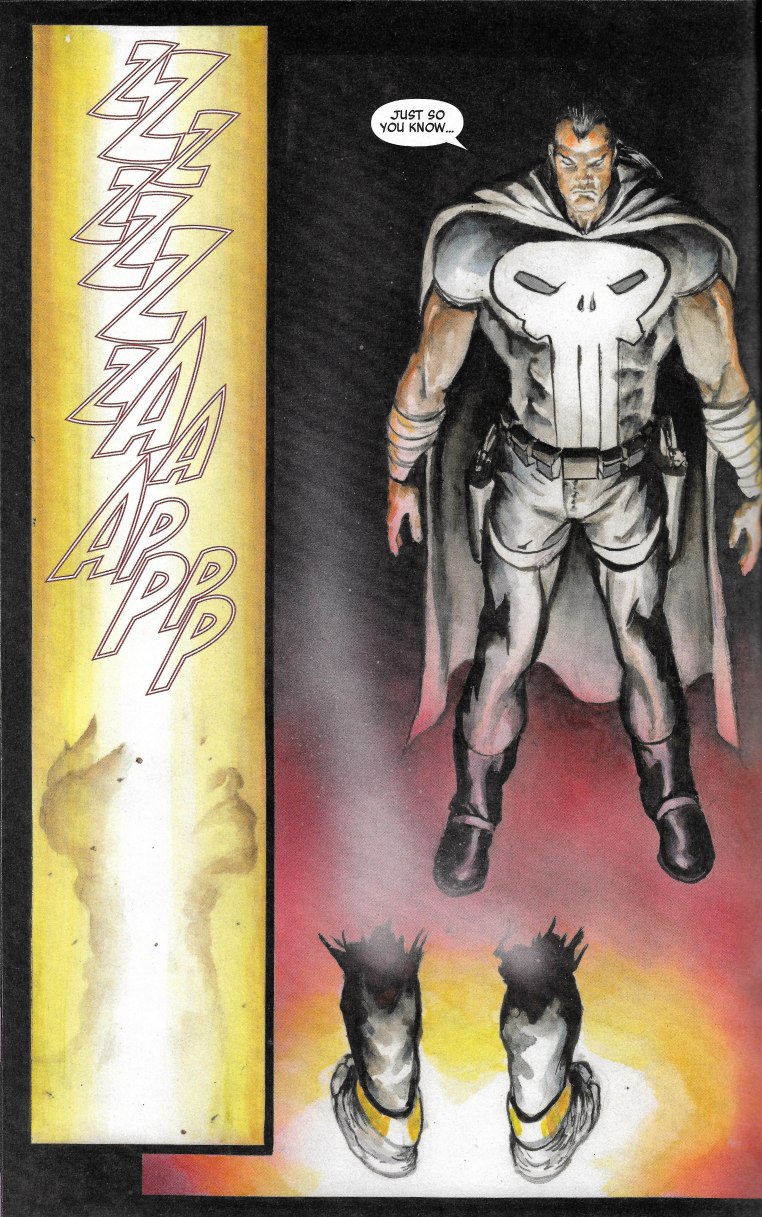 Yeah this is just fun and silly, which counterpoints how deadly serious the Punisher books were when it came to his mission of vengeance. This is just mayhem for mayhem's sake. I'm completely impressed with the execution.

And a little more impressed when I see who Frank will be going up against in the remaining four issues. 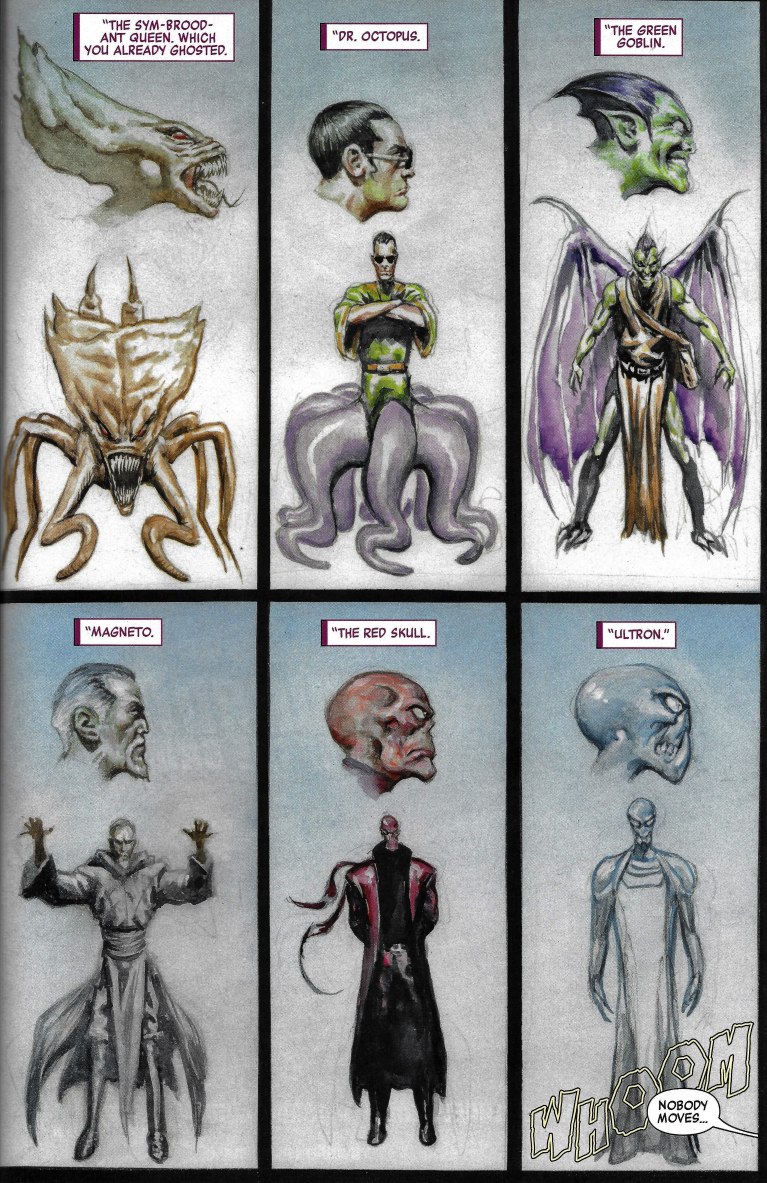 So we took down the Brood Queen, who is queued up next? Space Dr. Octopus! Space Green Goblin! Space Magneto! Space Red Skull (with mutant Nazi Hitlers!) and finally Space Ultron! Not to mention that the next issue featured Space Punisher vs Space Hulk on the cover. AND the fact that the last panel has Space Punisher ambushed by Space Sabretooth, Space Deadpool and Space The Leader...er, The Space Leader?, naw that can't be right...The Leader Space? Heck if I know. The Leader IN SPACE! There, that's good enough.

I have to say that I'm going to comb the bins to find these, because this one was kind of a hoot. It had a 70's DC space tale vibe combined with a 90's Marvel body count. And there is nothing wrong with that.
Posted by SonOfCthulhu at 3:17 AM

Email ThisBlogThis!Share to TwitterShare to FacebookShare to Pinterest
Labels: Ch-ch-ch-changes