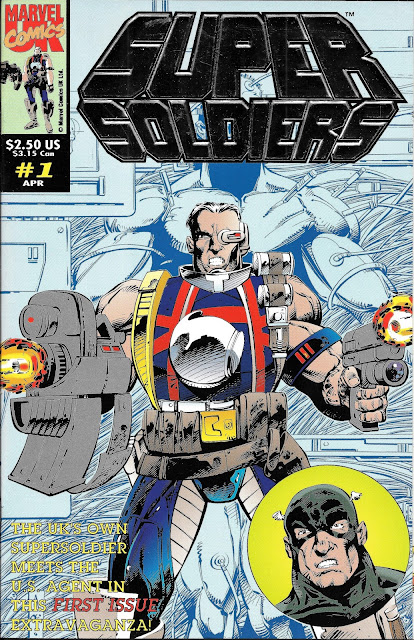 My apologies…The Crapbox is going to be a bit choppy for the next week. I'm sorry, but I've been moving houses and the transition has eaten into my time, my wireless access, and my ability to work on the Crapbox. I will get back on schedule the weekend of January 20, 2017. Promise.

I stumble across the books of the Marvel UK imprint with astonishing regularity. My immediate assumption was that the Marvel UK imprint, created in the early 80's to sell stories to European audiences, was some kind of bust right out of the gate. The truth is far stranger, as the imprint walked a rocky road for over a decade with titles that were hits overseas.

When it wasn't reprinting existing Marvel superhero stories for a primarily British audience, it was developing properties it could sell to both markets. Initially these new titles were seen as hits stateside, however they quickly became causalities of the glut of 90's and most titles were shuttered before the end of a year of publication.

Super Soldiers was one of those titles. After its launch in April of 1993, it lasted a quick eight issues and the vanished from the landscape.

Like most of the Marvel UK imprints of the time, it tried very hard to cameo many existing Marvel characters from the states in an attempt to legitimize the brand. It has always been Marvel's policy to throw in guest appearances on the first issue or two of a title to generate some crossover appeal, so the tactic isn't that new. It does make it a bit harder when the stories being told are taking place "across the pond."

Super Soldiers handles its guest starring drop-ins well, weaving them into the ongoing mystery and backstory. What it doesn't handle well is limiting info dump and breaking that all important "show not tell" rule. It also feels a little like a rip off of all the 80's -90's action movies, from Terminator to Universal Soldier to Aliens, which serves to make the concept feel less "fresh" in my opinion and more like something cobbled together to make a quick buck.

We start the book with a cold open that throws us right in the action but does nothing to explain what is going on, who any of the characters are and what is at stake. We get these shadowy techs dealing with a breakdown of their cryogenic facility. Suddenly worried that "He is going to wake up" and they start issuing orders to a group of guys straight out the Colonial Marines from Aliens. 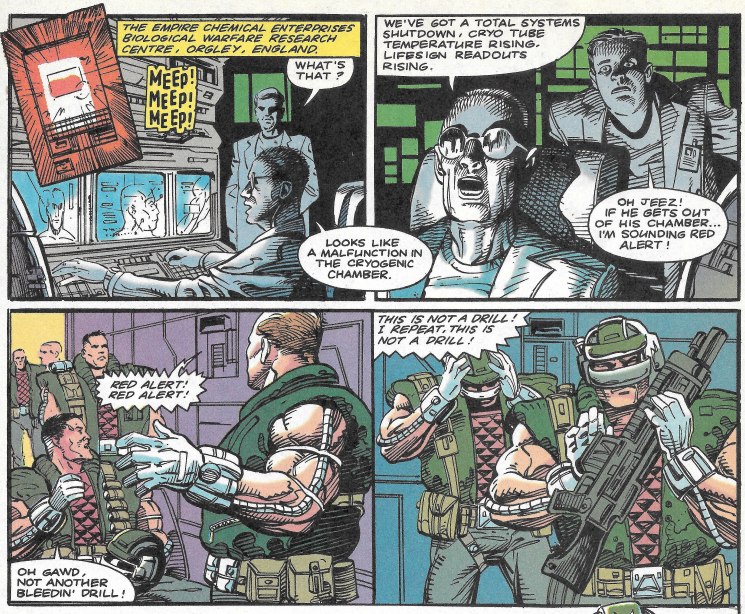 I love how the guy says "Not another bleedin' drill" and then the loudspeaker answers him. 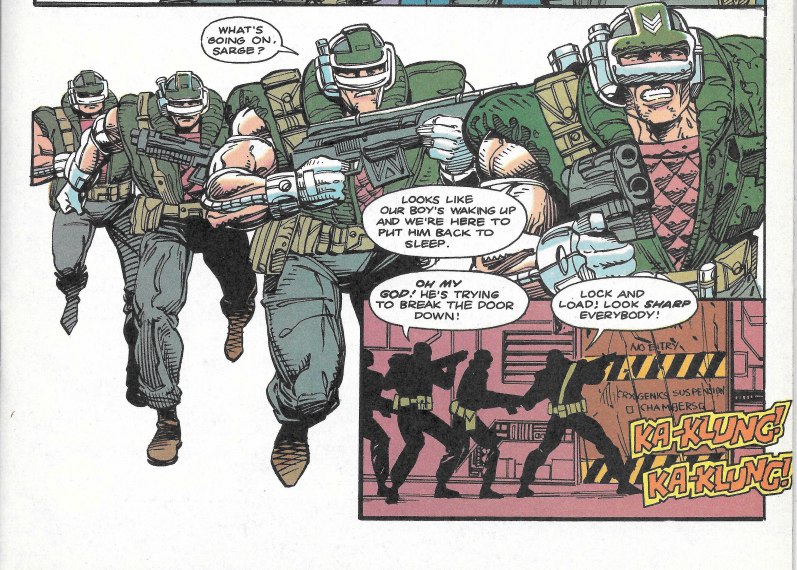 I'll admit that this next part does a bit to get me to feel there is a genuine fear of the upcoming conflict even if I have no idea what the stakes are if these guys should lose. 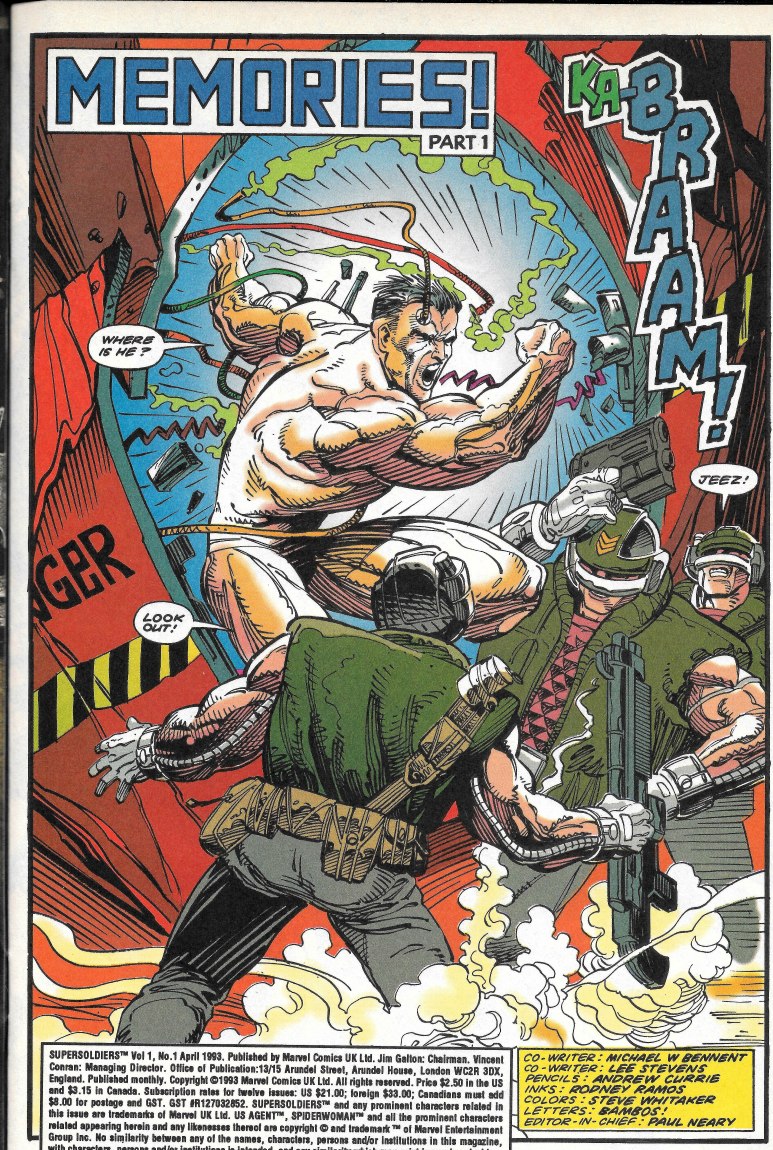 Next up is this neat full page spread of a traditional 90's superhero model, all bulging muscles and attitude, tearing through the scenery like it is little more than cardboard, and ready to kill anyone at the slightest provocation. Oh, and this is our hero folks! 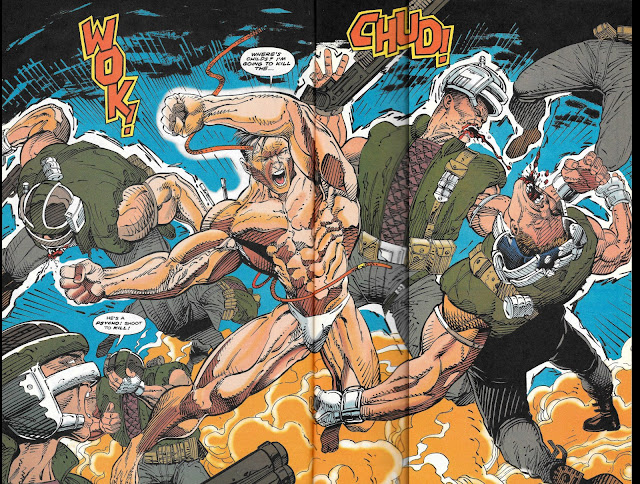 Not content with one full page splash of the Super Soldier in full-on rage mode, the book thinks we REALLY need to see him tearing through guys like a gorilla through wet tissue paper, so they give us a DOUBLE splash page of the same thing right after the first one. 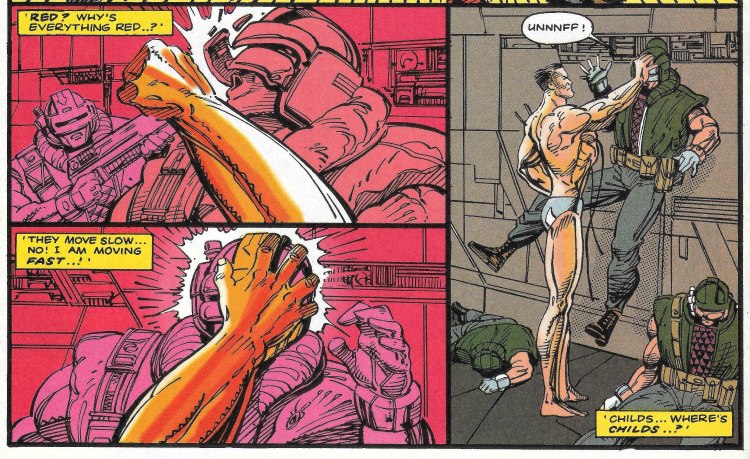 As he takes out the last of the soldiers, we slide into his head to see that everything he is viewing is in "Terminator vision". Apparently he also can move faster than human reflexes. He quizzes himself about the location of a person called Childs, which is a plot string to be cleared up in exposition to be given later while the actual person will be an ongoing mystery. 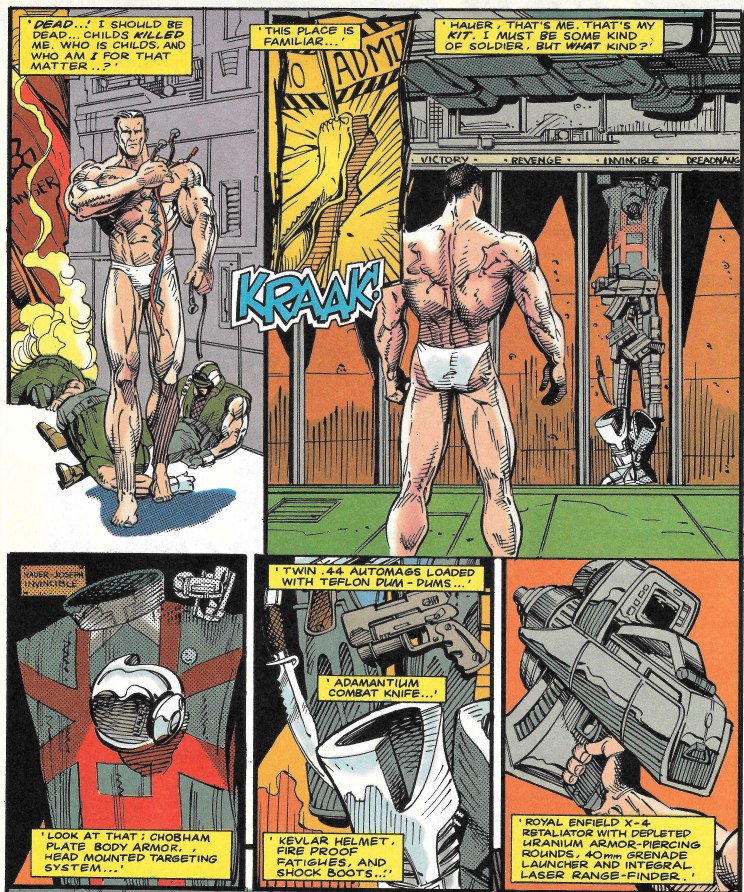 We and our hero lean his name is Hauer from his locker, which comes stocked with bunches of goodies. 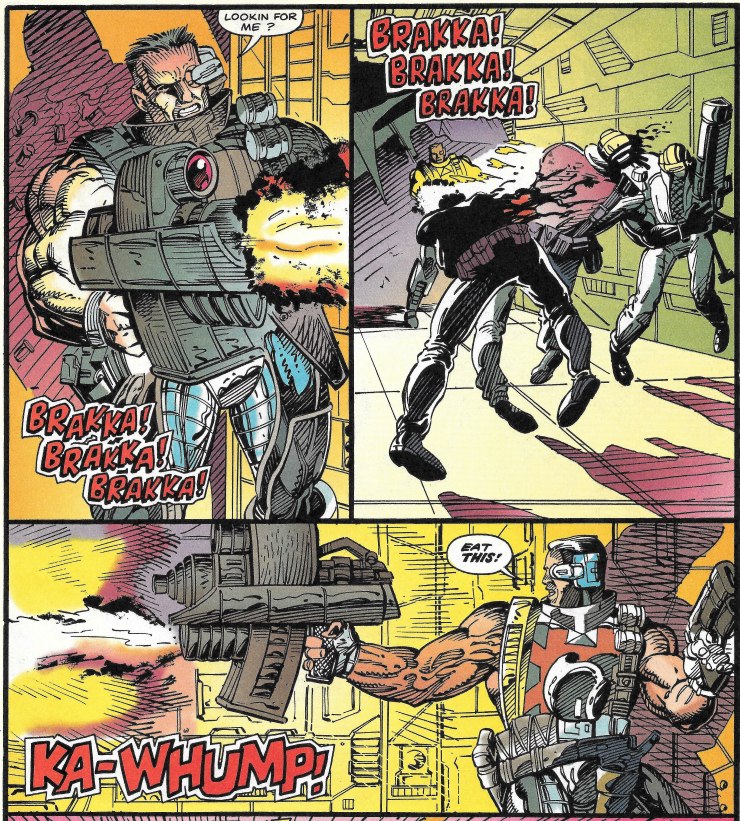 In all this isn't a bad opening so far, even if after he picks up all the items from his locker, I'm suddenly seeing him as a discarded prototype of Judge Dredd. And look at those sound effects! "Brakka? Brakka?" The size of that overgrown pea-shooter too...it's like his picking up a coffee table with a muzzle attached. All of this is just action eye candy as Hauer mows through the remaining regular soldiers in an effort to escape the facility.

And escape he does. What's waiting (conveniently) for him on the outside is this young lady. This is her ONLY introduction into the story. Just "I'm here and I see something that looks suspicious and I'm checking it out…" 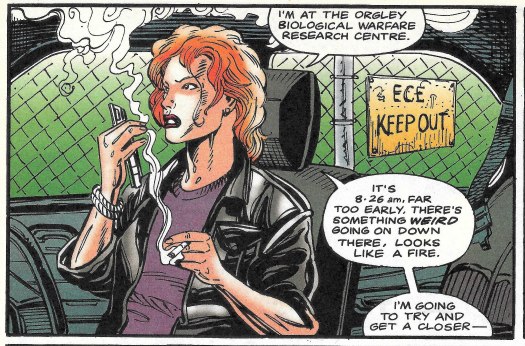 We'll get more from her in a bit, but first we have Hauer getting all muscle-bound on her. 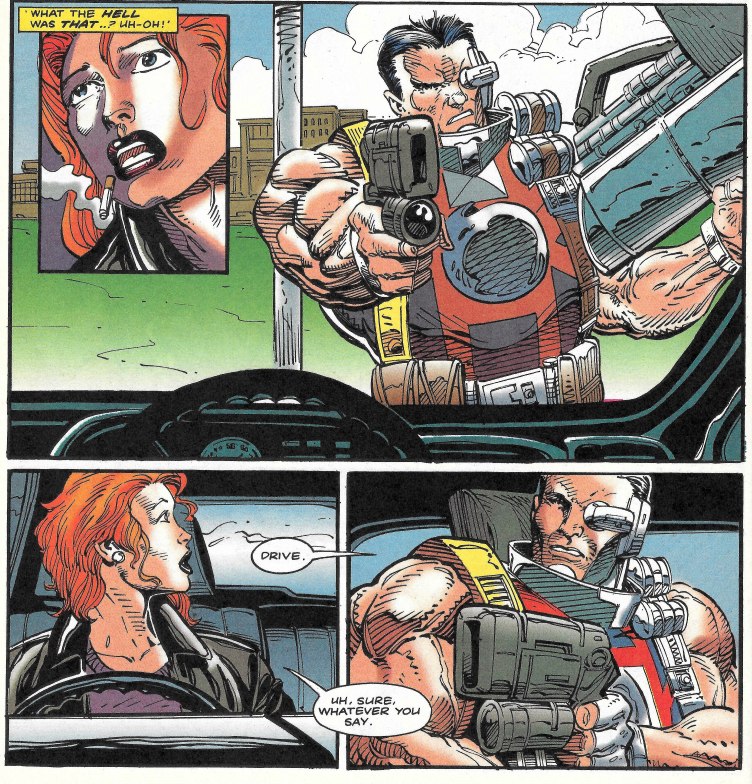 What I wanna know is how did he fit that giant gun in her car? Did it put it in the backseat or something? That thing was massive.
Anyway, enough about packing. Having just moved I've seen too many items crammed into spaces they weren't meant to go. Back to the story where we suddenly get introduced to about five characters who will represent the shadowy conspiracy around Hauer's cryogenic freezing and imprisonment. 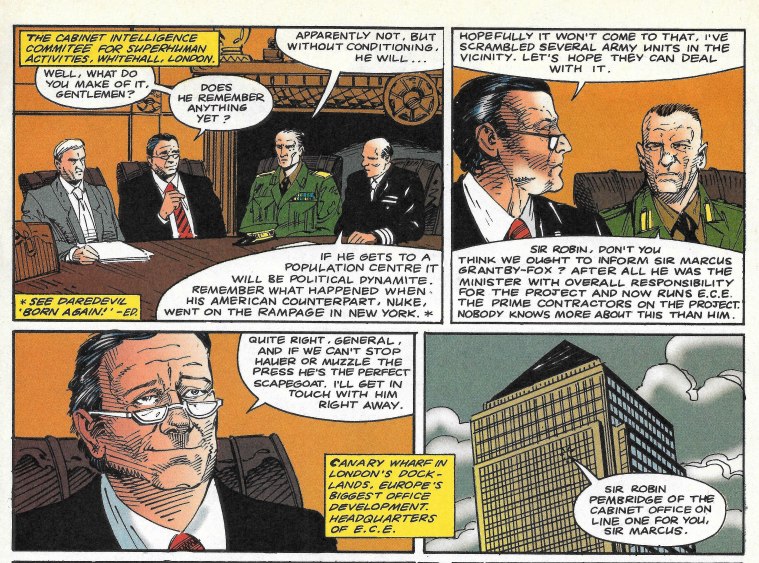 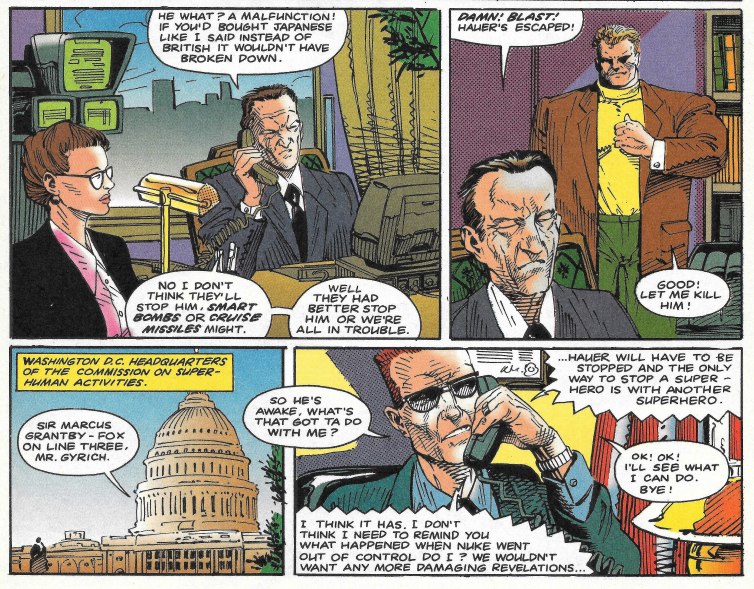 Then the main antagonist and fall guy, Sir Marcus Grantby-Fox. Grantby-Fox will end up sending that huge guy after Hauer but not before we get Peter Gyrich from X-Men/Avengers fame, to make a cameo and name drop some other Marvel characters.

Meanwhile in England they smoke in their comics. 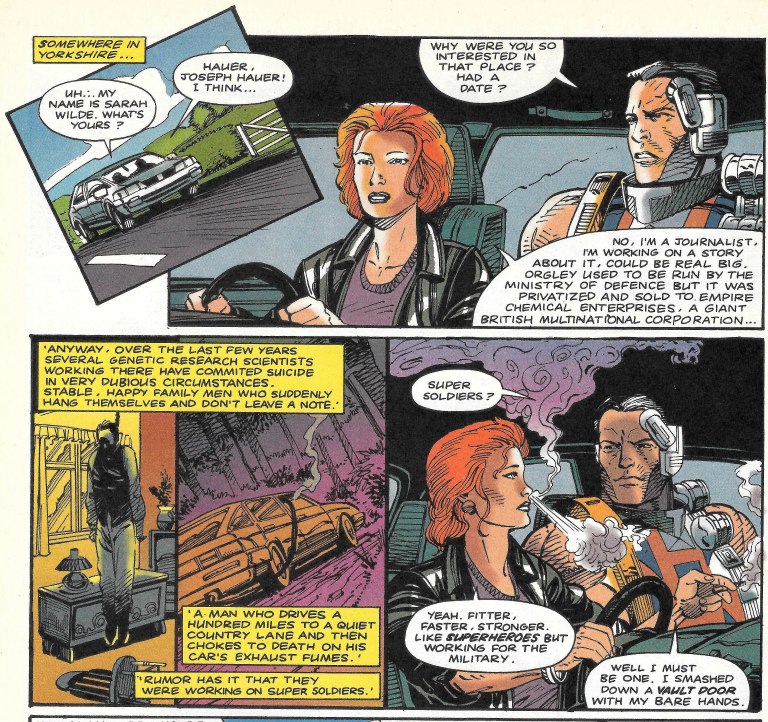 And while Sarah Wild expositions us while exhaling carcinogens, Grantby-Fox has set up a road block, meaning the story was getting bogged down under the weight of its own leaden word balloons. 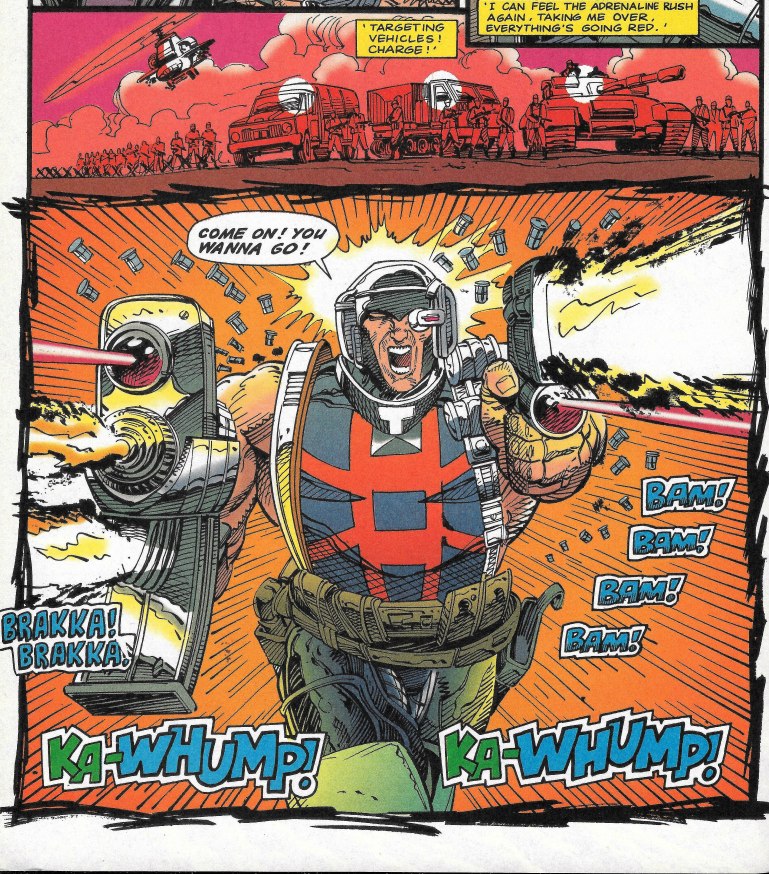 They pull over. Yes, there is a tank and all these gunmen there, but they allow the car to pull over. And I assume for Hauer to carefully unload that piece of furniture he calls a "Royal Enfeld X-4 Retaliator" from the back seat while nary a shot is fired their way. All so Hauer can walk into the ambush guns-a-blazing without any damage to the car or his driver occurring. 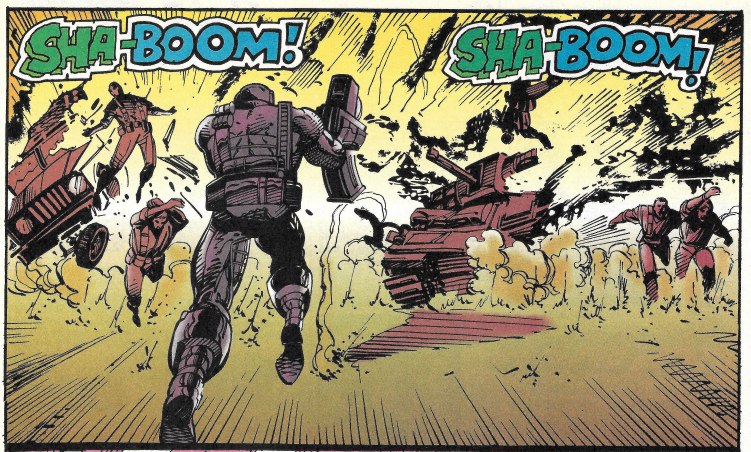 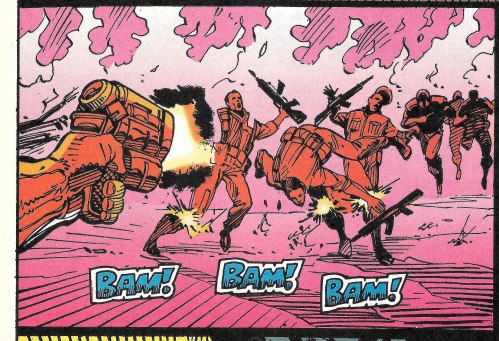 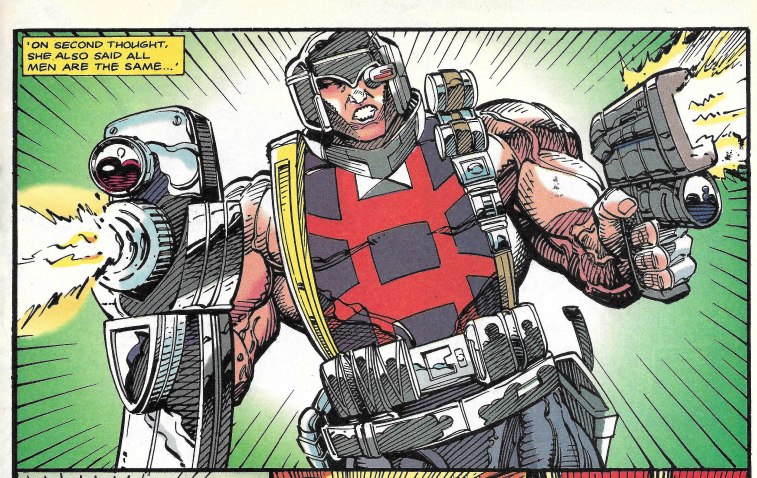 So much blow up! So much! 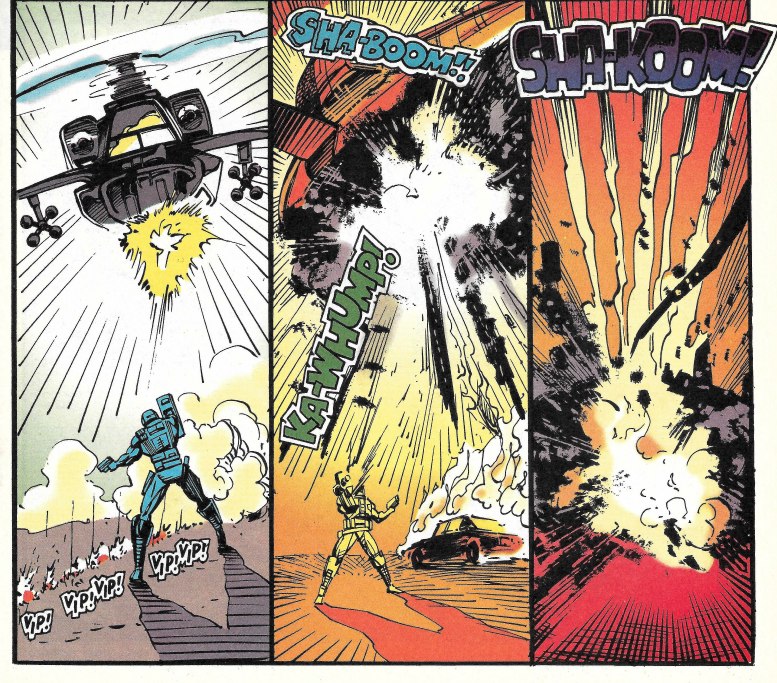 Jeezus! It out Rambo's Rambo. The one thing this book doesn't have though is balance. We get a couple of pages of word heavy plot summary and then three or more pages of things going boom with hardly a word balloon in sight. There needs to be a better connector between the two story pieces than what we get. 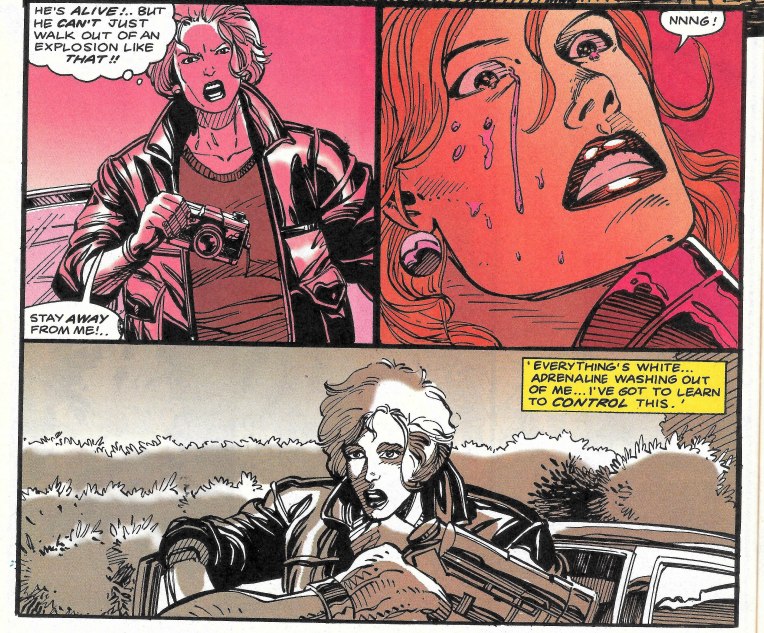 And in the end what we get is that Hauer can barely control his boom-boom, almost doing in the reporter who was driving him. 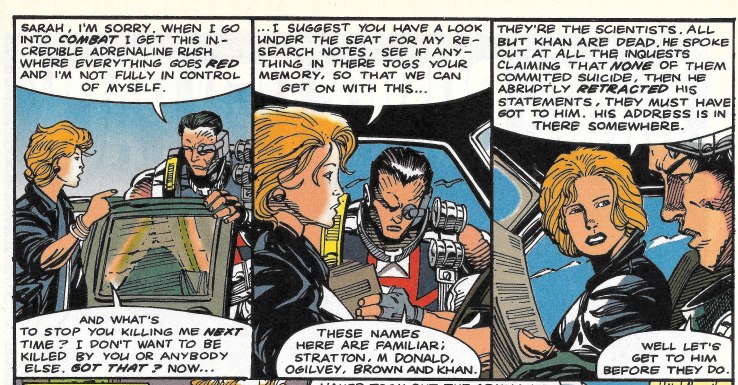 And the next page is a huge mess of words. Just tons of them. Sarah lays her research into the facility and which scientists were involved in projects there. Grantby-Fox sic's the other super-soldier on Hauer and Sarah and, for good measure, the guy they are going to see. However the page feels so heavy that it gives you tired head. Take a look above. 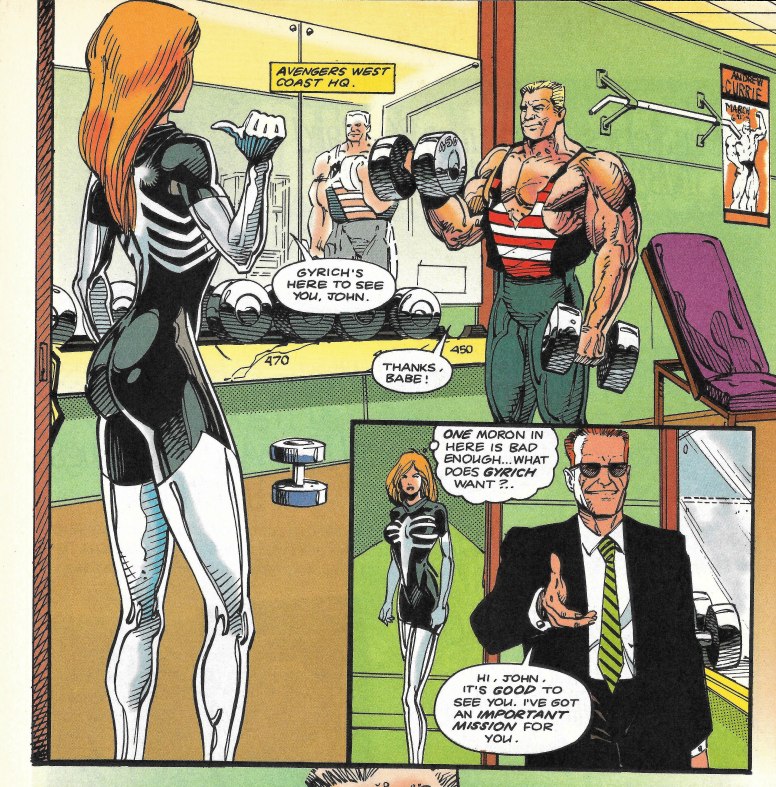 Then they throw in a cameo by Spider-Woman and setup Gyrich throwing U.S.Agent at Hauer in a next issue tease. 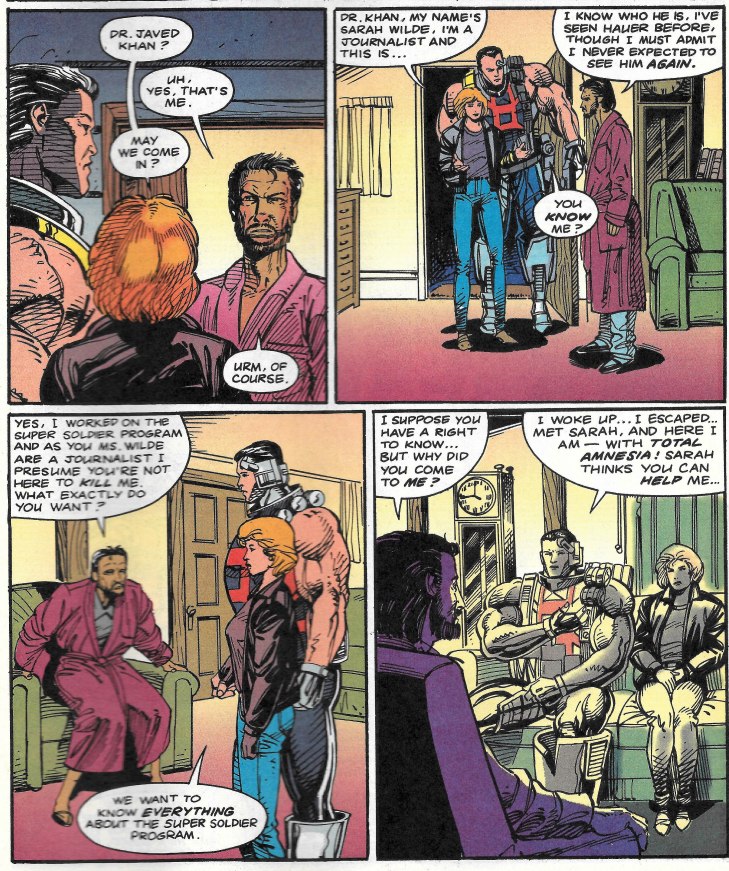 Only to follow that with Hauer and Sarah meeting with Khan, the research scientist who helped create the Super Soldier program. That starts out okay… 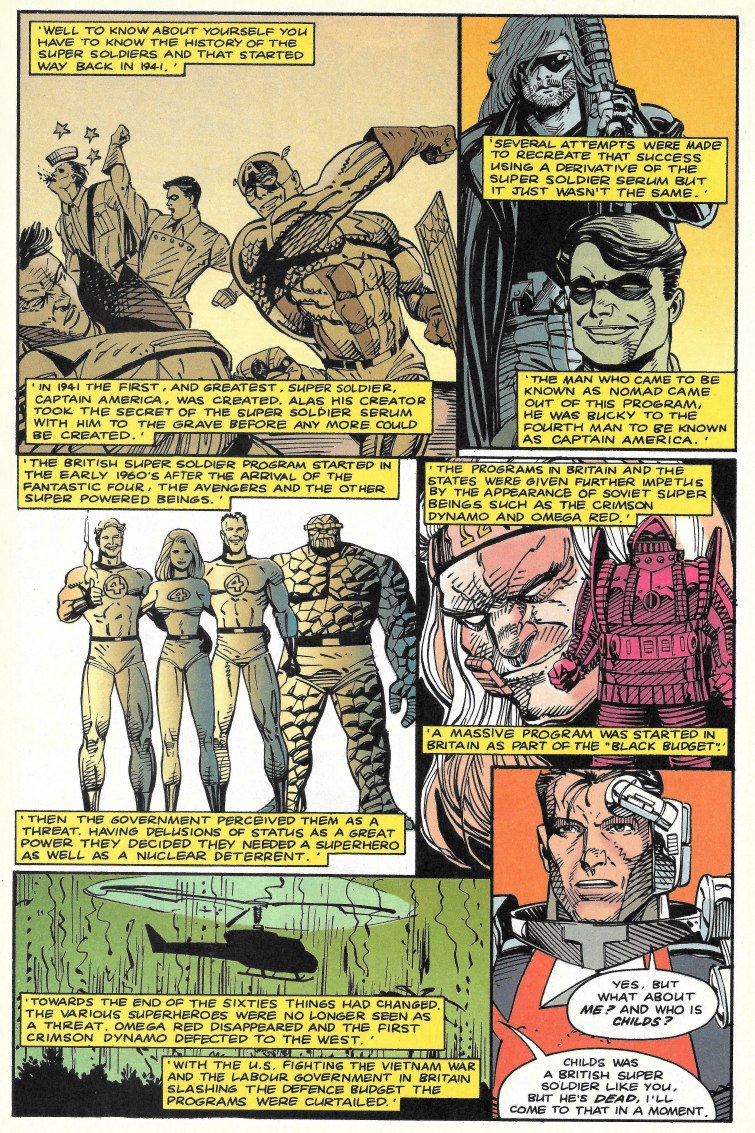 …only to devolve into a page of exposition and random name dropping (wtf are the Fantastic Four doing in this?) that seems too much like the author is info dumping this at us instead of telling us a good story. There is no flow here that makes us invest, no show only a huge tell. All of this could have been handled better.

Childs name is brought up and he is "dead," like that has ever matter in the Marvel universe.
…and we aren't done yet. We next get Nuke from Daredevil discussed and then more exposition/info dump… 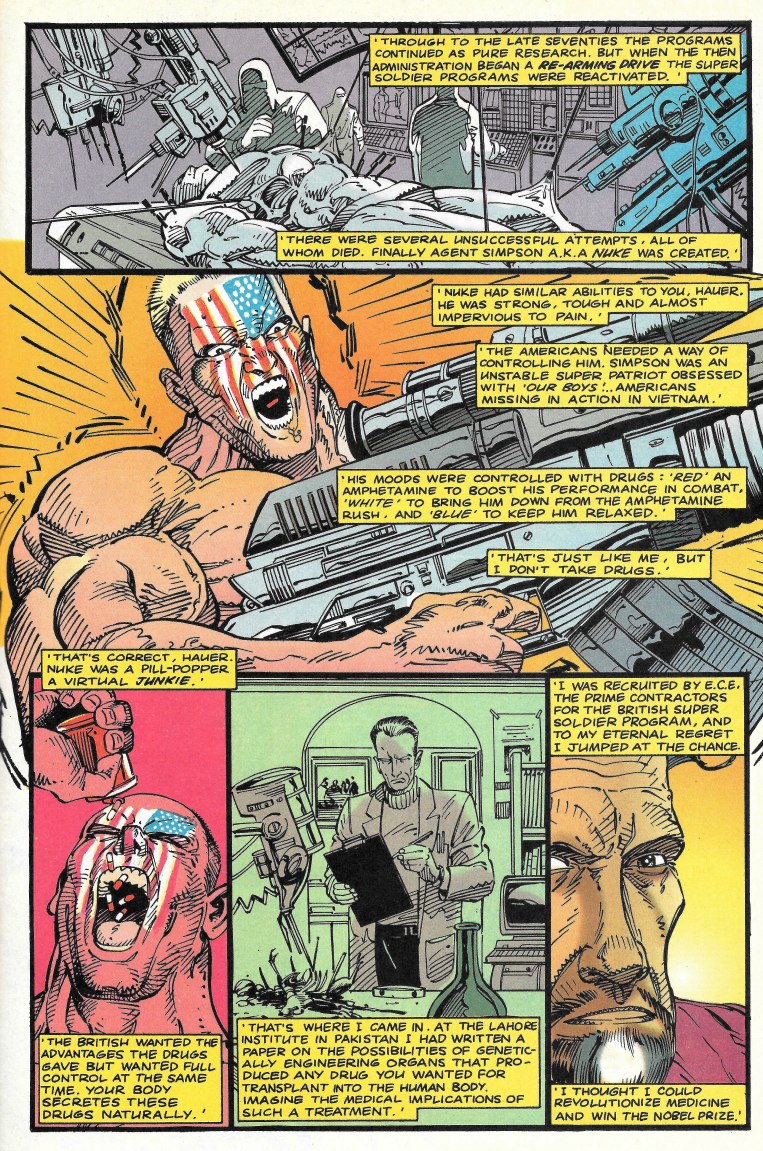 …which goes on for TWO MORE pages. And we already know the outcome: Hauer is a super-secret government super-soldier experiment and the government wants to keep him under lock and key. I could say it in less pages. Heck, I said it in one sentence.

Look, backstory is fine. But don't pour it all out in four-five pages in the first issue. Tease the reader with what they don't know. Give them some, but not all of what they are looking for. Make the reader work for it. Don't just throw it at them and hope they want to continue reading. That's sloppy.

Anyway, that was far too much reading, so now some mindless violence. 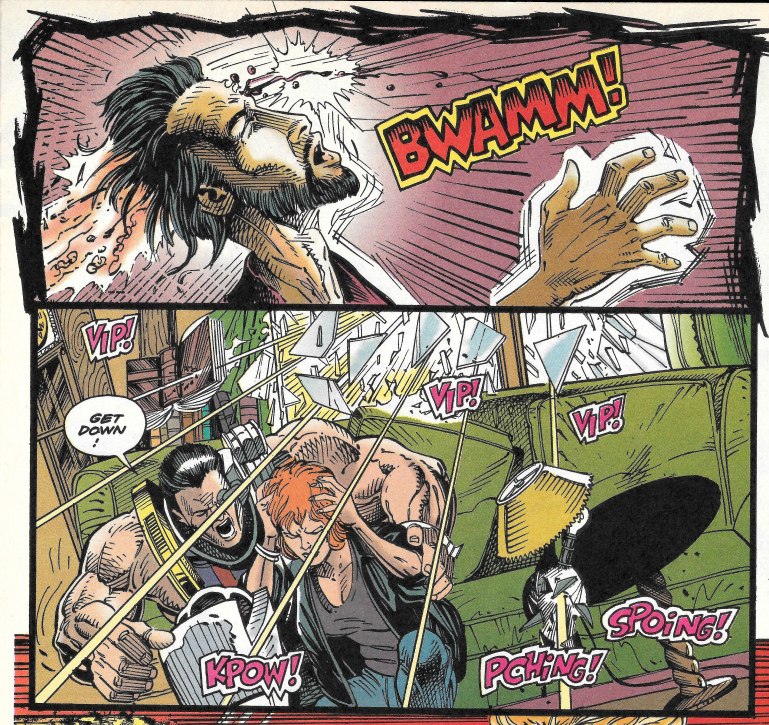 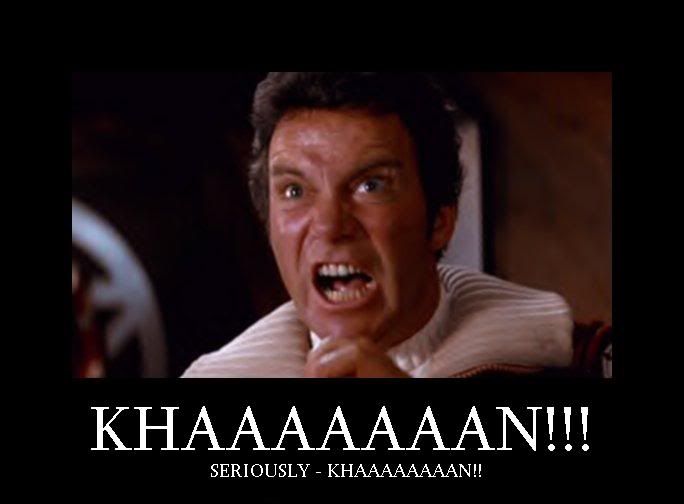 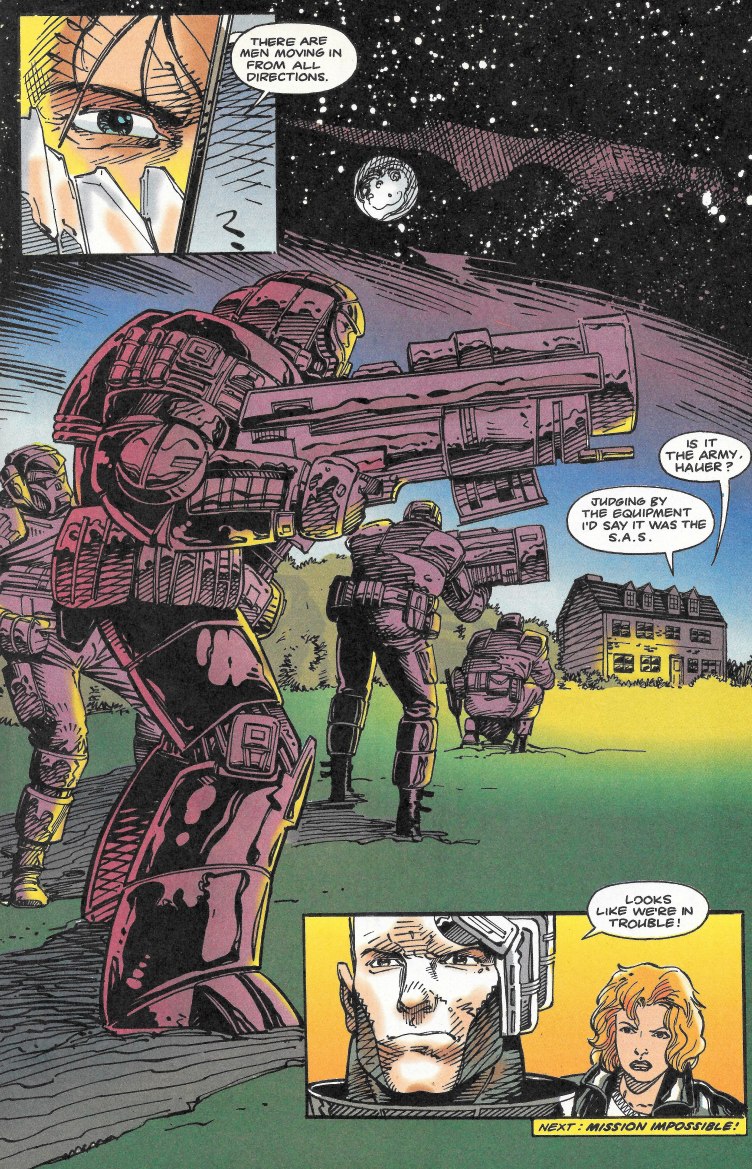 And with men moving in from all direction, the issue moves to continued next month.

I'm not saying I hated this story concept. Sure it is dated and the action movie tropes are VERY obvious, but sometimes those can be fun.

What isn't fun is wading through pages of long-winded exposition that is pure info-dump and doesn't appear to occur naturally. There needs to be more balance to the storytelling here. So shape up, Super Solider! Shape up or ship out!

Posted by SonOfCthulhu at 5:23 AM