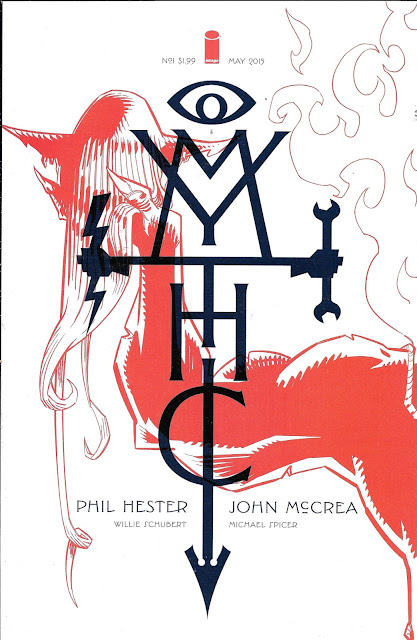 Phil Hester is a quiet, likeable fellow with a great taste in shirts.

Oh, sure. I should start a review by saying he's a talented writer and artist. I should say that he had a breakout hit with Mythic and that of the four issues I found in the Crapbox, I've enjoyed each one more than the last.

I probably should mention John McCrea's art too, given the amount of great things I watched him do in those four scant issues, the number of odd and amazing creatures he's concocted.

I should do all those things. But I'm not. I am starting by pointing you to a piece I did for DC in the 80's where I interviewed Phil and Jia Nitz that lead me to keep a keen eye out for Mythic when my bin diving came across them. And now that I've read a few, I'll have to find the trades next.

They are so, so good.

If you had to boil them down to a 2-second sales pitch, I'd have to go with "Magical version of Men in Black". That does the book a bit of a disservice by being too cut and dried, but there are many similarities at work here.

First off is our protagonist, Nate. He's just a young man working in a beat up ramshackle cell phone store. Nothing unusual about that. Then one day… 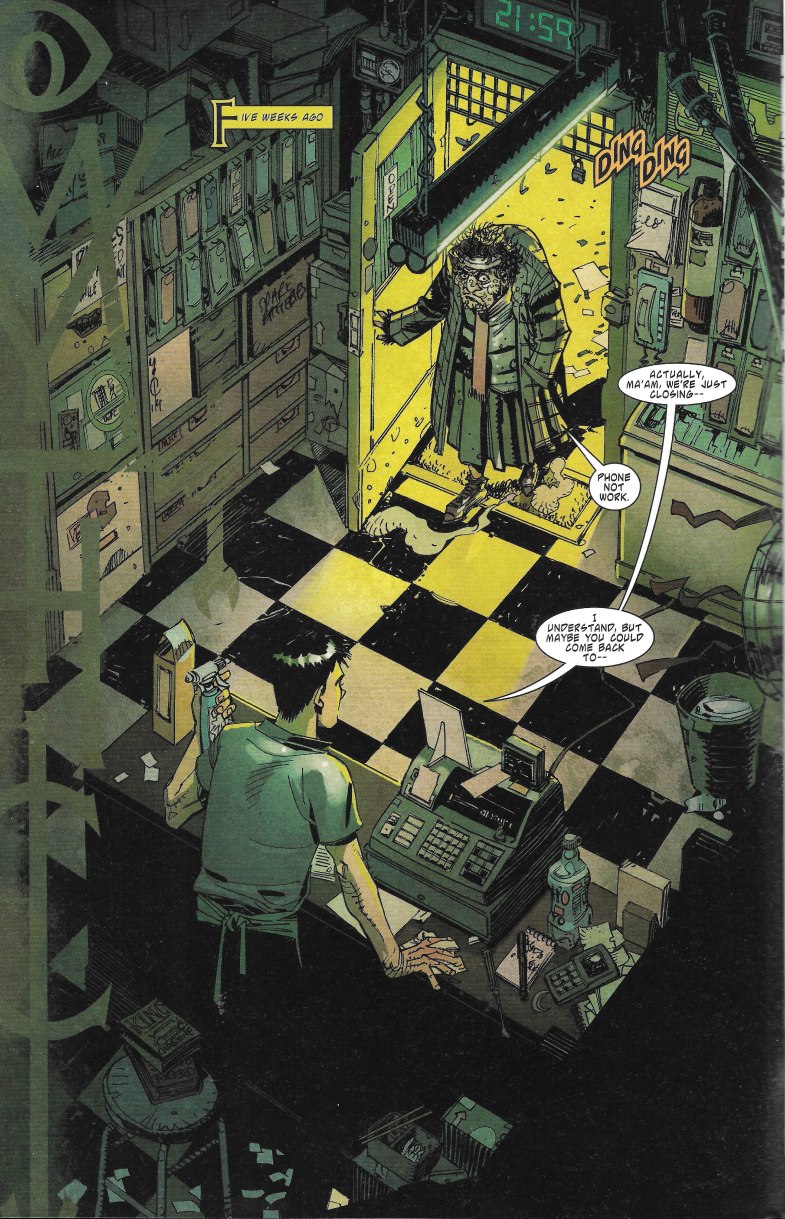 Check out that gorgeous full page panel by McCrea. The colors and the layout with the book title running down the left side. This book is really something special. And speaking of special…

Yeesh, she's ugly. And all she can do is complain about her dead cell phone. Which is okay, really – that's Nate's job: fixing cell phones. 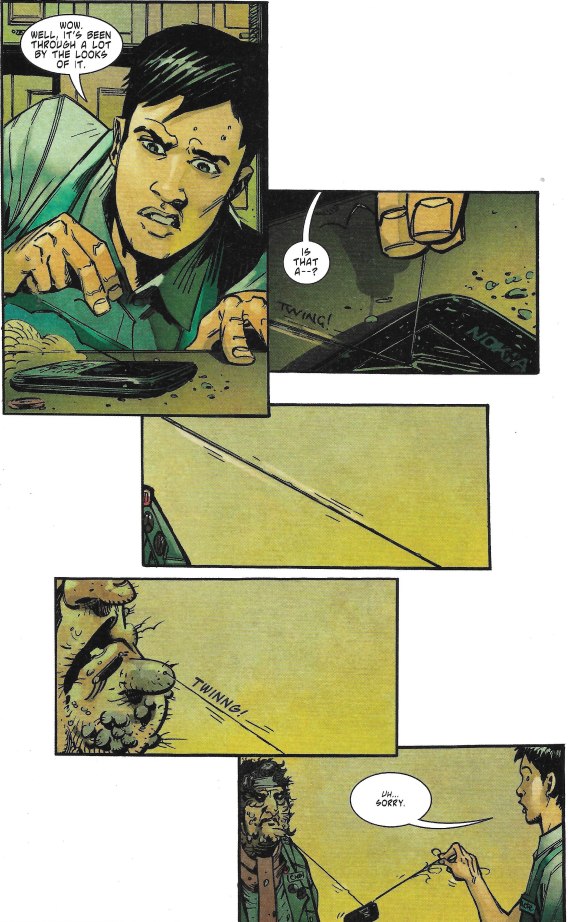 …and all hell breaks loose, starting with the eruption of the old woman's head... 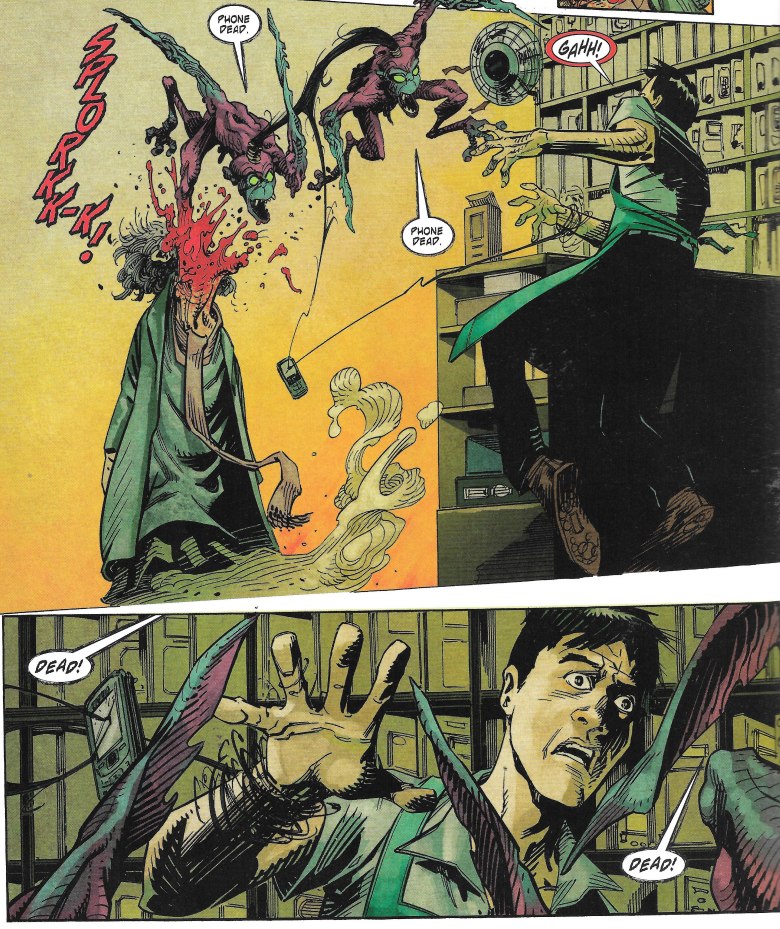 ...and the emergence of two spike-armed monkey things attached by their top knots.

They seem to have their sights set on straight-up murdering Nate.

What an opening. You immediately invest in poor Nate who was just minding his own business when all this head-full-of-crazy starts happening. The battle rages out into the back alleyway in a pretty one-sided manner as the monkey-things grow while taking turns slashing at Nate, who is bound to them by a clump of hair that grows thicker with each passing second.

Nate turns the slashing to his advantage and uses his surroundings (that being a passing city bus) to do away with one of the creatures. 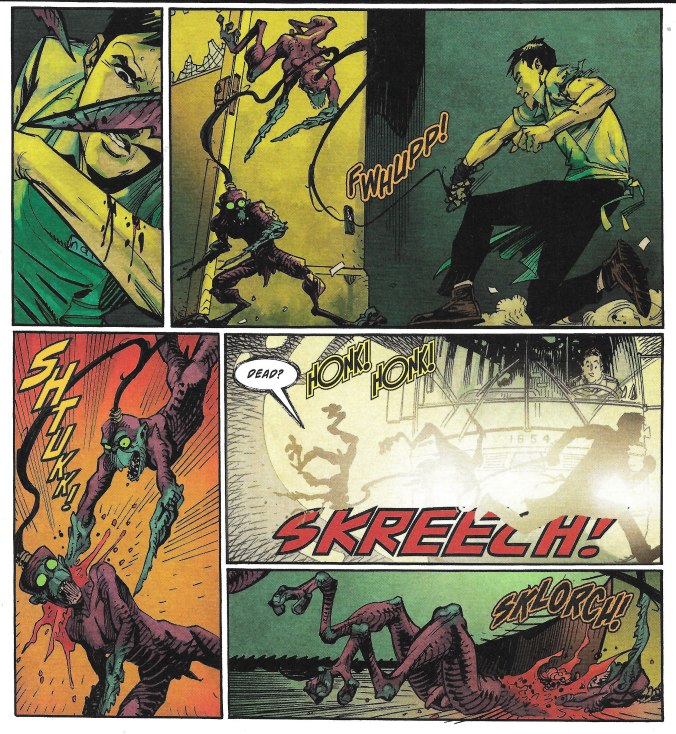 Unfortunately this makes his last adversary larger somehow and even more bloodthirsty. 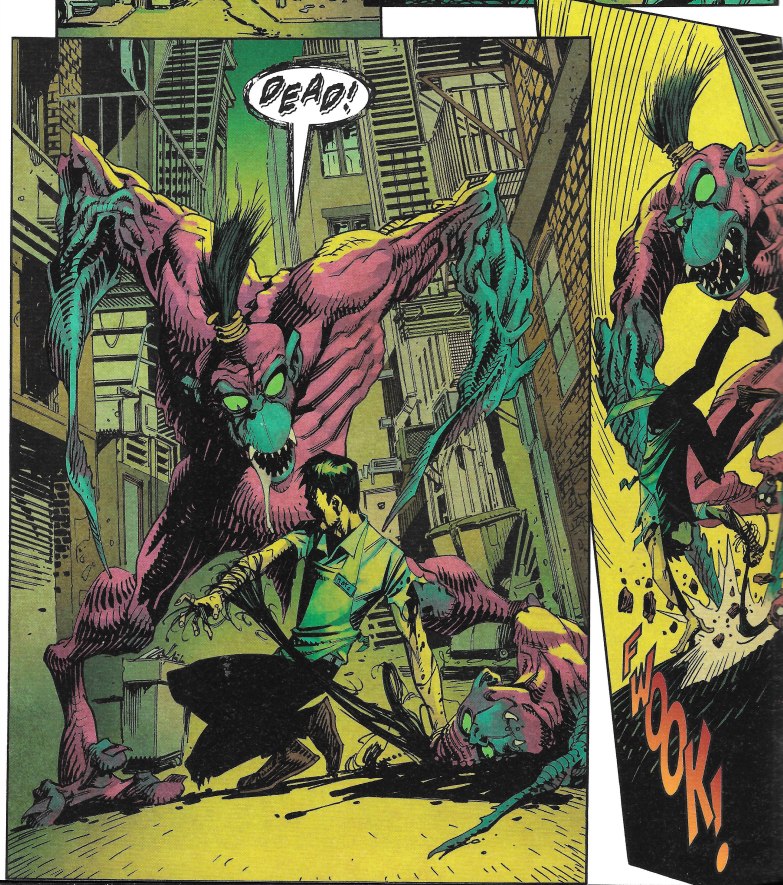 By now you should recognize Nate as the Will Smith of this book. He's resourceful, brave and athletic. So this next bit shouldn't come as too much of a shock. Nate gets the better of the stabby-monkey using a hunk of its brother's arm spike. 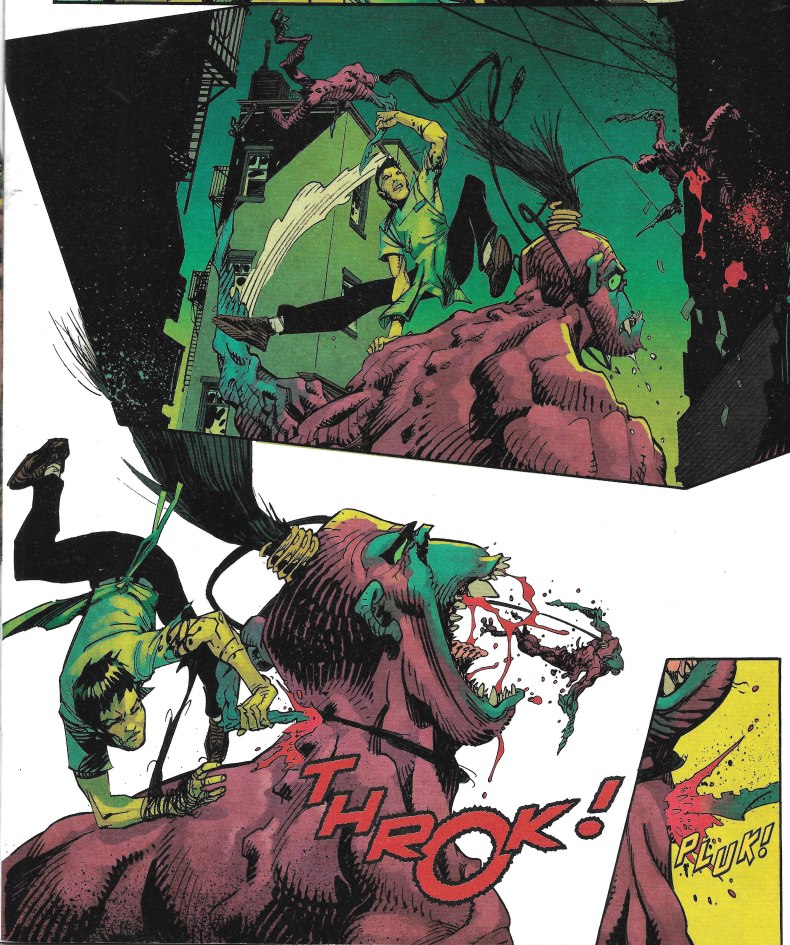 And as he stands over the carcass of the dead thing, he is approached by a stranger with a job offer. A job offer that sounds very familiar. Meet Waterson of Mythic. 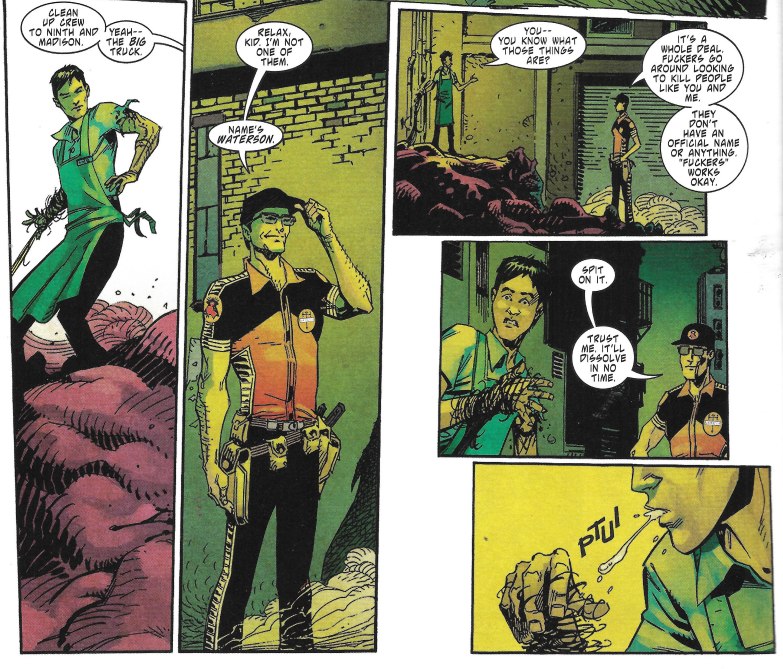 (I love the spit thing. Such a great touch.) Seems that Nate is now "marked" because he has seen and dealt with creatures from the supernatural realm. Marked in such a way that they will keep coming after him. 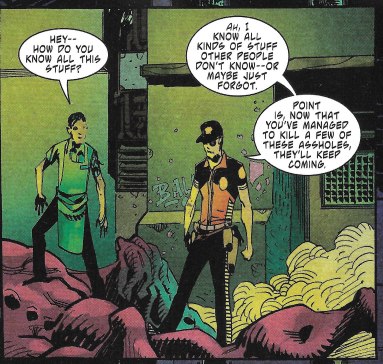 But Waterson has an alternative to waiting around for the boogie-men of bygone religions to come after Nate. He offers Nate a job. 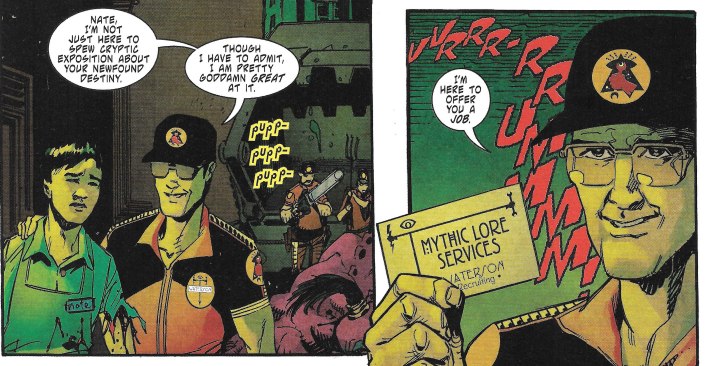 Sure it has story elements we've seen executed before, but NO story is 100% original. Heck, my favorite movie is Alien, which is in essence a haunted house story set in space. The crux of the matter isn't "have we seen this concept done before?" It is "Is this version entertaining?"

From this opening we skip right into Nate on the job as part of a Mythic "problem solver". Note that a lesser writer might turn this into "chase down the boogieman of the month" but Hester has a bit more gray matter than that. He's got gods and creatures lined up with problems rare and unusual. As well, there is an overarching plot that involves the fate of Mythic Lore Services and the human race as a whole.

Our jumping on point to the bigger picture, now that we have the concepts down, starts here, with what is possibly Nate's first assignment to a Mythic Lore Team investigating a drought in a southwestern part of the country.

They've setup bar when they are stumbled upon by the Sheriff and two members of NOAA looking into the odd weather condition. Of course the locals don't take kindly to the team at first, especially since part of the ritual they are performing involves burning a small sacrament…while drinking cocktails from their portable, pull along bar, I might add. However things take a turn when one of the NOAA scientists owns up to having called them in on a lark.

The head scientist pish-poshes Mythic's ability to do anything to resolve the situation, until one member of the Mythic team, a young lady we haven't been introduced to, handily discards his "science"… 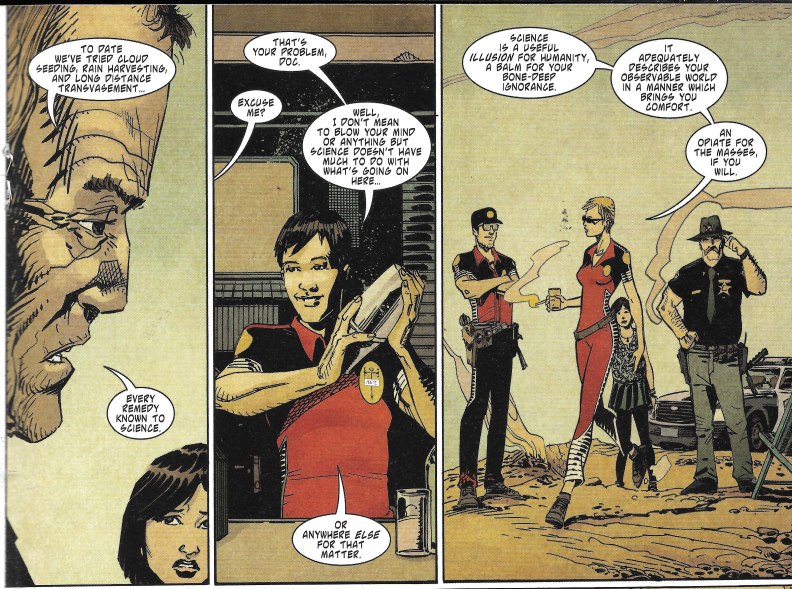 …with a very Lovecraftian "the inability of the human mind to correlate all its contents…live on a placid island of ignorance…and it was not meant to voyage far" kind of thing, that works really, really well. 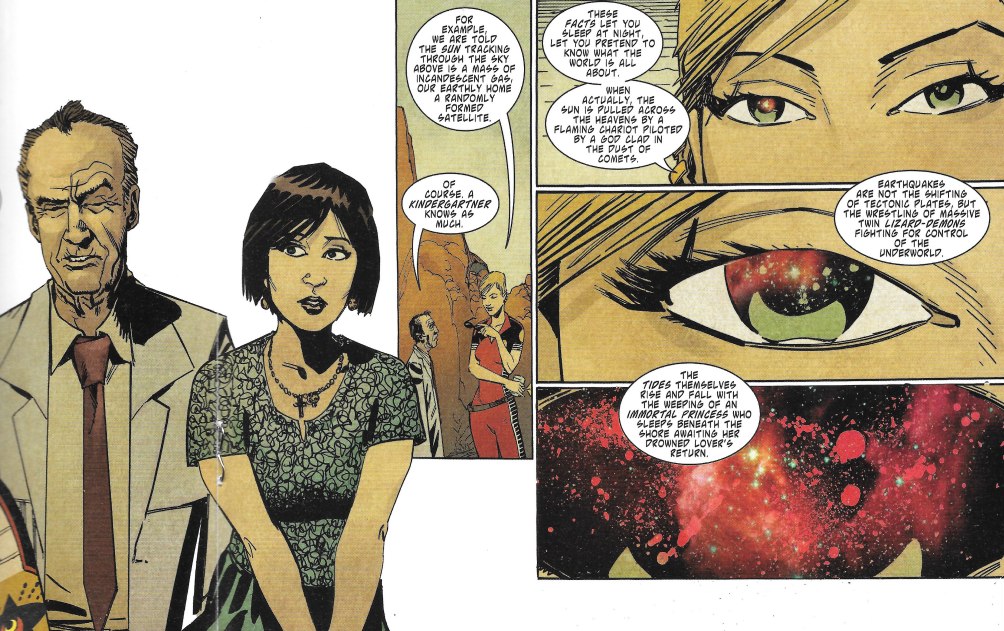 McCrea's art working hard to sell all of it.

Meet Cassandra everybody. She's the psychic part of this team.

She discovers what the problem is: an unlikely and amazing story of elemental lovers who have grown "disenchanted" with each other. 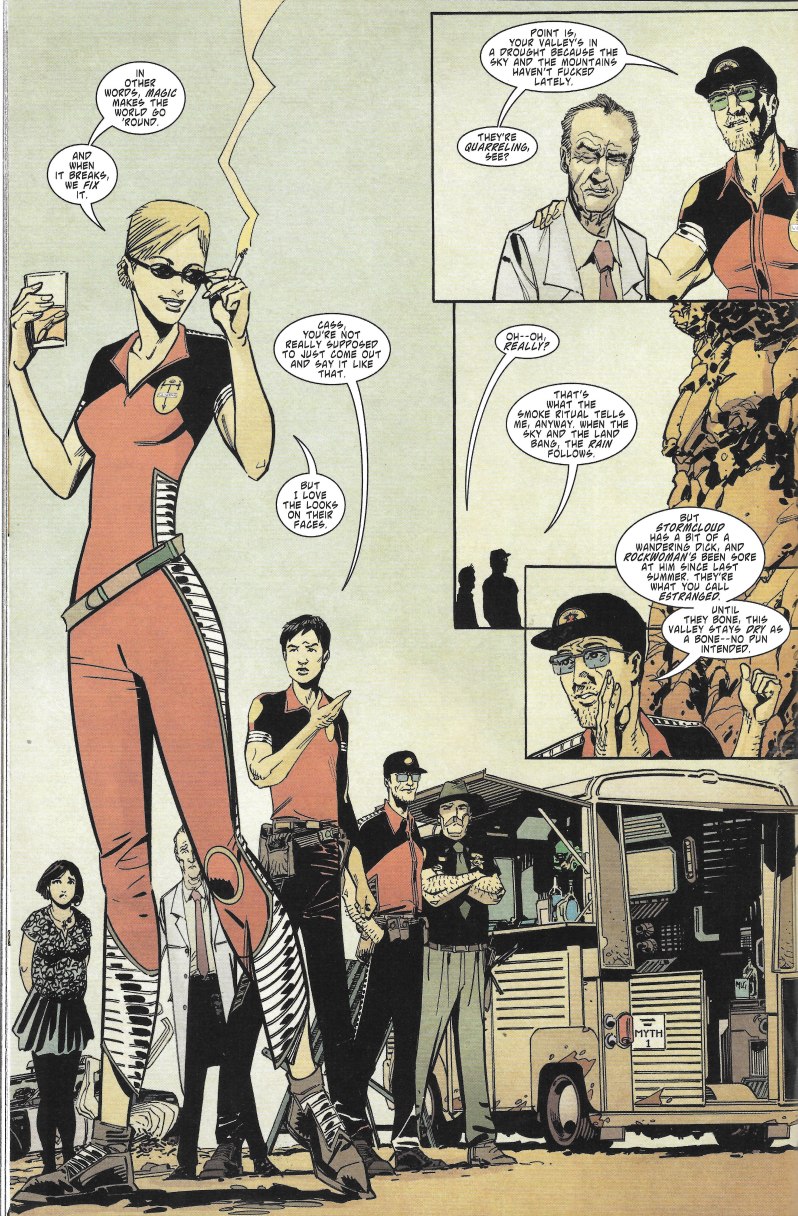 See, I told you Hester was up to snuff when it came to inventive plotlines. She also comes up with the plan for how best to solve it. 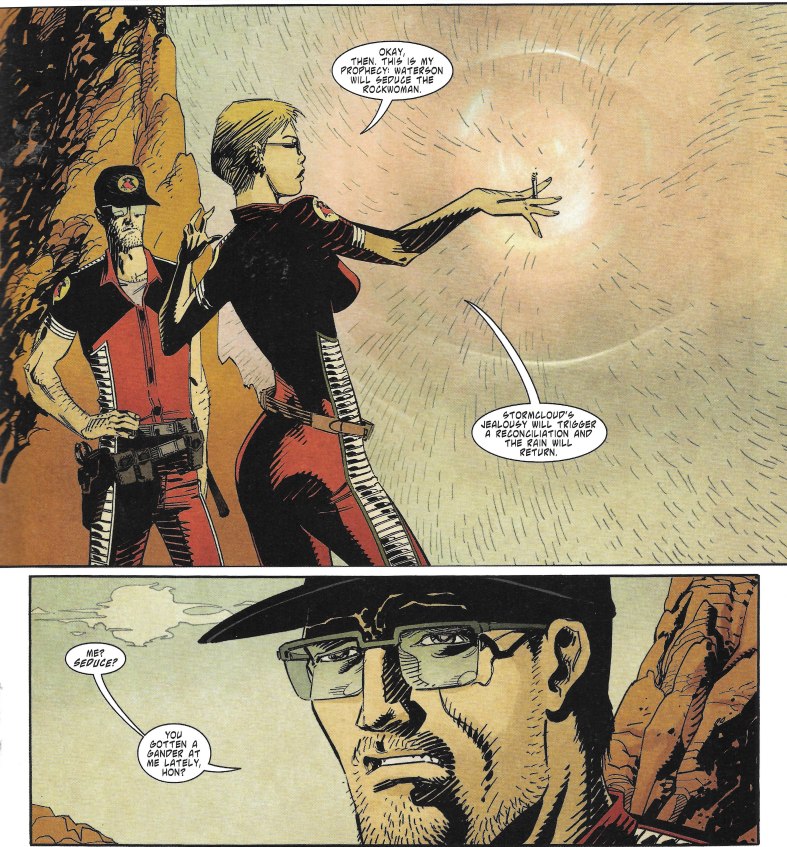 Waterson seems unsure he's up to being the king of seduction, however. When traditional methods fail, Cass makes a suggestion. 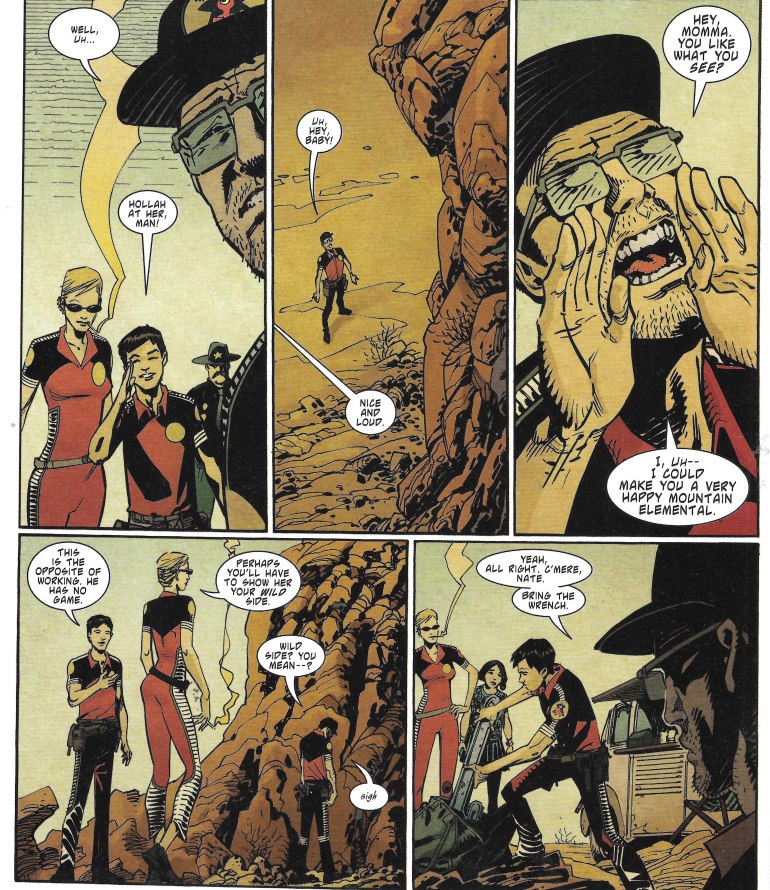 What Waterson isn't letting on about is this little secret he has. A secret that involves needing to be struck by a wrench the size of a two-by-four wall stud. Nate seems reluctant to do bodily injury to a fellow team member. 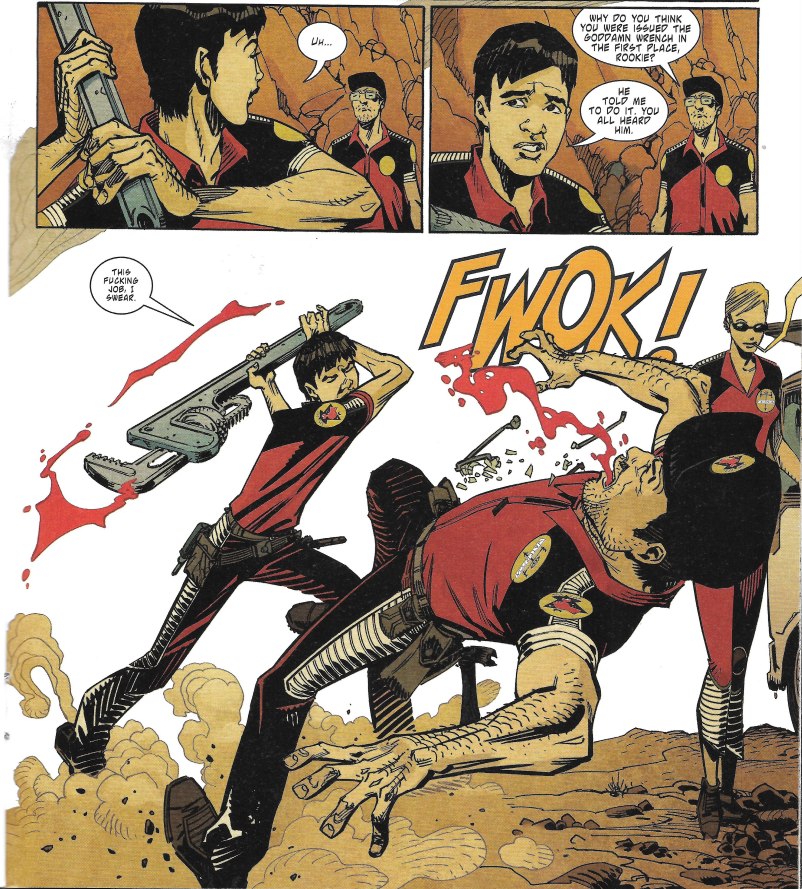 The wrench does the trick, knocking one of Waterson's teeth straight out. Waterson plants it and out springs this guy. 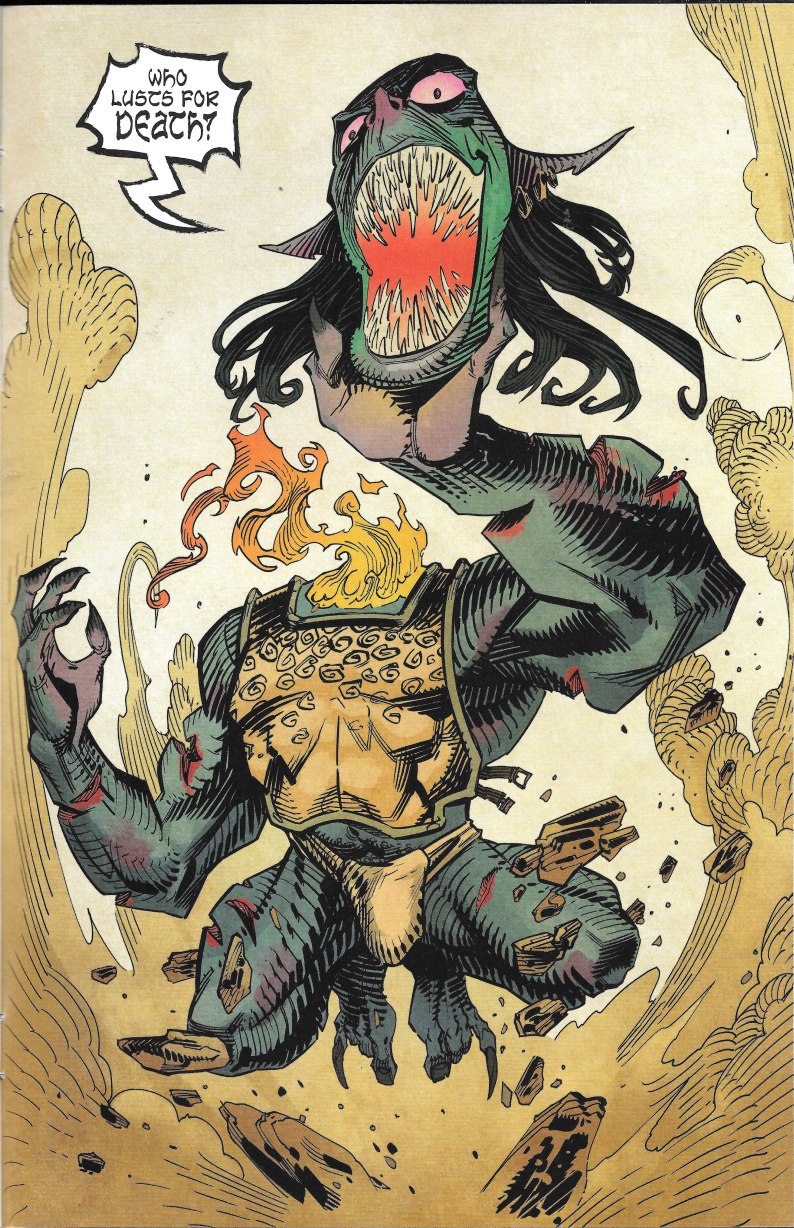 Meet Waterson's "wild side," a headless beast known simply as The Killer of Enemies, and he is every bit as much fun as that name implies.

What's also fun is this entire series. I won't spoil where things go from here, but you know the drill: humanity is in danger and these guys are the front line of defense against all things hoary and mythological. Hester and McCrea are to be commended. They've put a new spin on a great premise and created a series everyone should enjoy.

I hope we haven't seen the last of it.

Posted by SonOfCthulhu at 2:55 AM