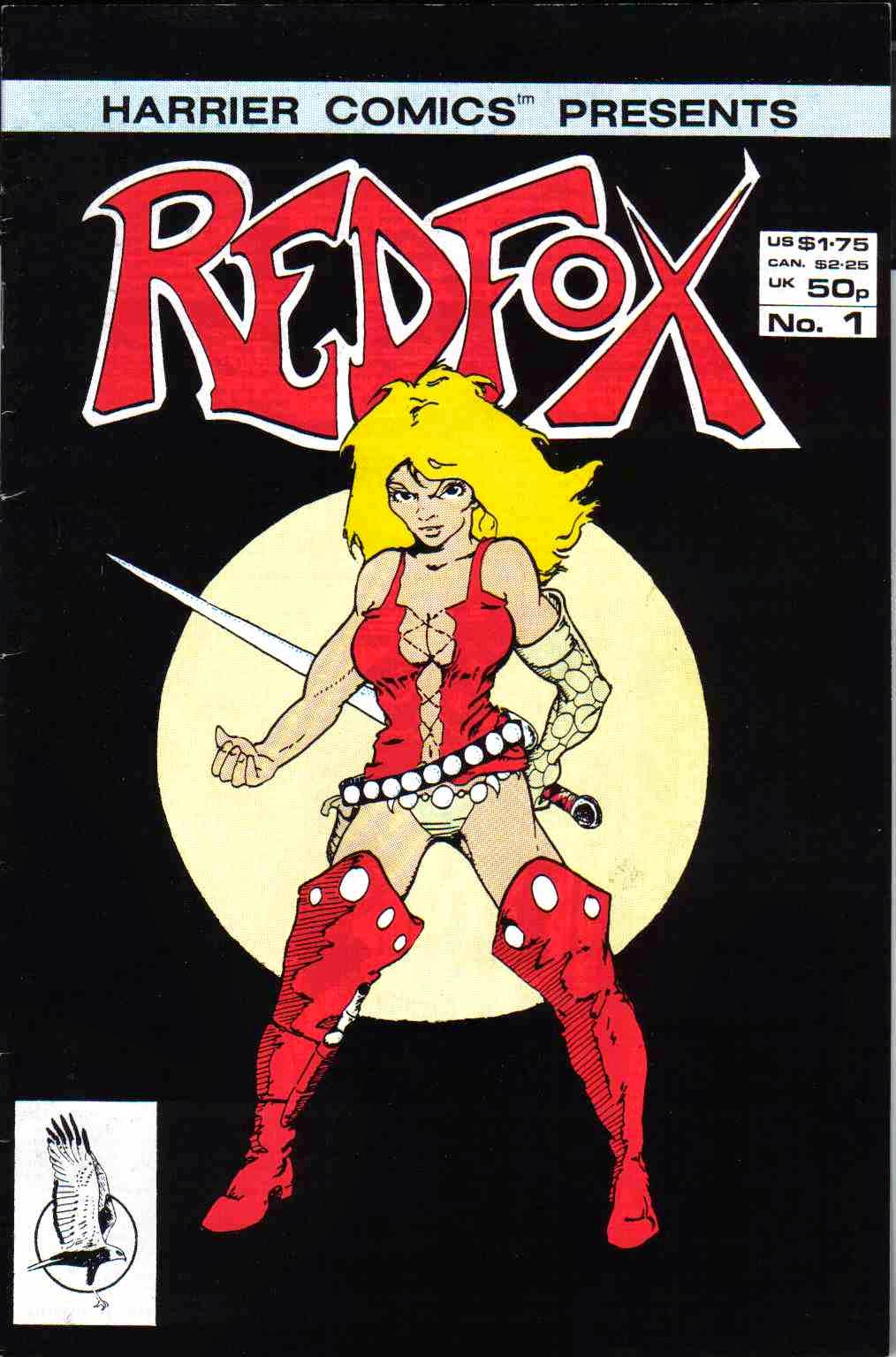 “Oh, this is the big one! You hear that Elizabeth? I’m dying of bad colorless art.” One of the few books in the pack that worked “blue”.

Redfox is a comedic Red Sonja-ripoff book that ran for over two and a half years in the late 1980s. It was nominated eight times for Eagle Awards and winner of the Best New British Comic in 1986. Things must have been really bad for British comics in 1986. No less than Neil Gaiman himself helped with the last issue, which proves that even great writers can suffer from bad taste from time to time.

This book is a very by-the-numbers variety of dungeon parody. There is nothing here surprising or new and the art speaks for itself. 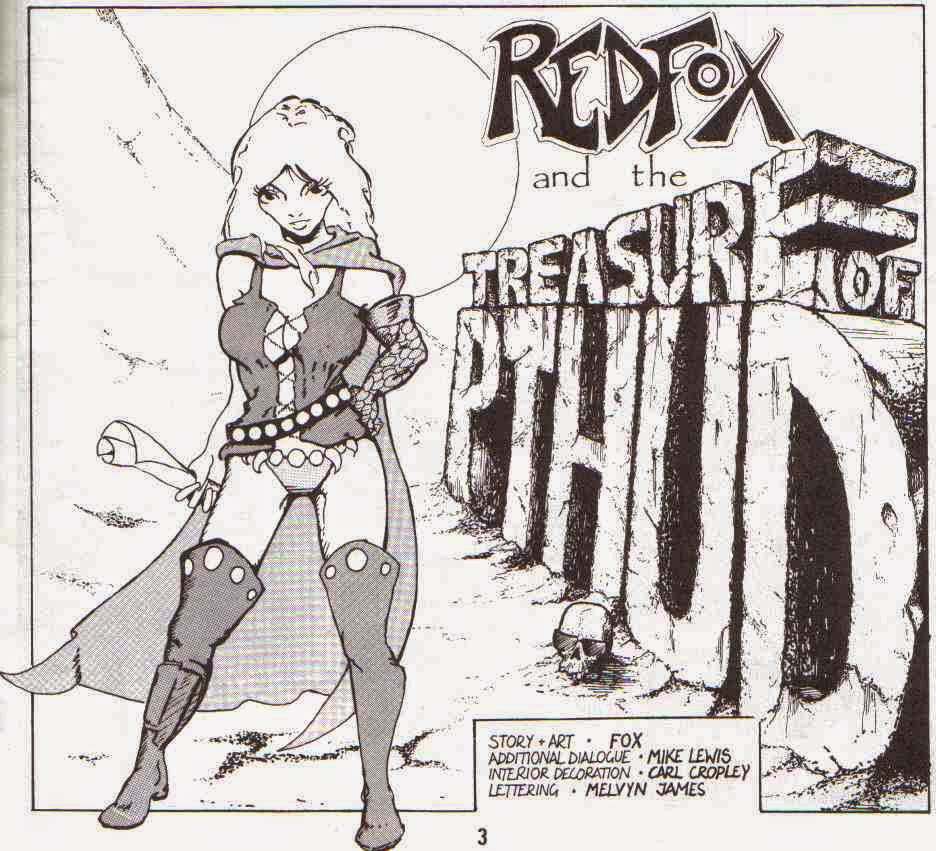 I’m fairly sure that I saw this exact same picture drawn on countless notebooks and book covers in high school.

The story is fairly simple: Red Fox is wandering the desert searching for something called the Treasure of Pthud (bet you already guessed that). She comes upon a burial tomb, digs out a ankh shaped key and opens it up.

She’s lost the key in her purse here. Same thing happens to my wife all the time. 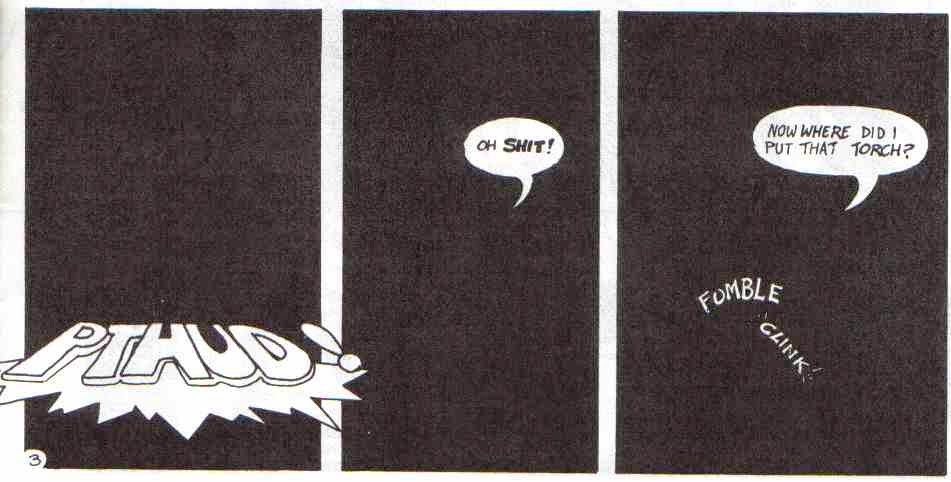 If only all the panels could be drawn like these. Guess they couldn’t afford all that black ink.

Moving on she encounters a creature named Trog who, despite his fearsome appearance, is apparently the tomb’s maid. 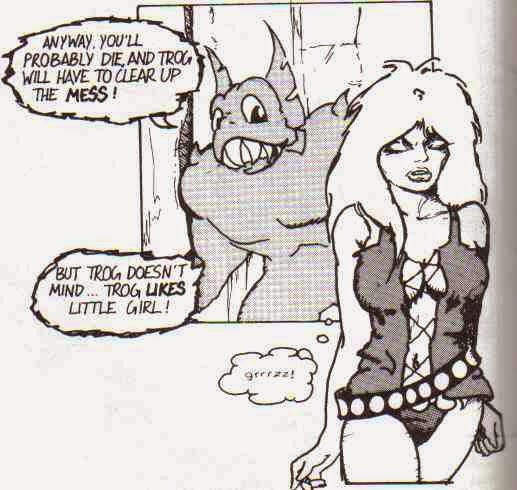 Note that it’s impossible for Trog to chew solid foods due to a tremendous overbite and the appalling lack of medieval troll dentists. Trog explains the way to the treasure and Redfox marches off to collect it. On the way, she runs into a pit trap, a hall full arms holding swords, spears that jab at her from the ceiling and a snake with the power of making her hair defy gravity.

About this time she’s captured by the tombs other denizens, which are led by an Anubis-headed dude who speaks like he’s from the Bronx. See how funny that is? 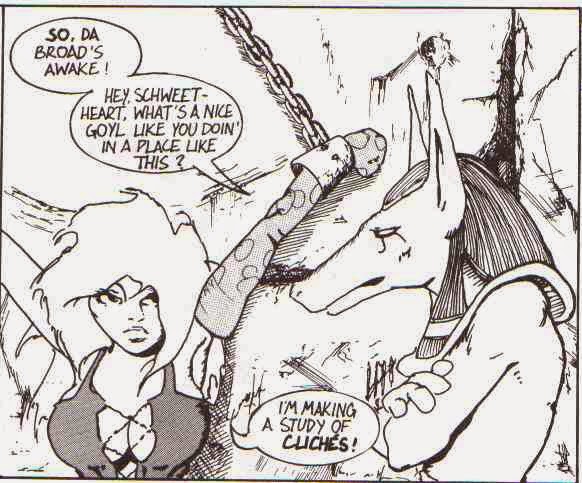 Ok, not so much. Trog arrives and frees her. Redfox finds her way to the temple treasure only to find it’s a dead wizard. Or a mostly dead wizard. Soon the tomb guards are battering down the locked treasure room door and the wizard provides them with a hasty retreat through a magical portal.

That was my exact reaction while reading mag. Funny how art imitates life. Even funnier that I called this stuff “art”.

The wizard’s name is Estaque of Galtaya and he’s searching for the Blue Cobold, another wizard with a potion of eternal life. Red Fox isn’t doing anything now that the treasure turned out to be a sham, so the wizard and the halfway dressed barbarian chick decide to team up. He gives her a ring that turns into a sword and magically changes the color of her outfit. It’s a freaking black and white comic. How are we suppose to tell?

Further adventures await these two and unfortunately I have some of them. But I’m not going to be reviewing them just now. The art in this one was just too much. Stealing a quote from Redfox herself, “I think I’m going to be violently ill!”
Posted by SonOfCthulhu at 3:31 AM