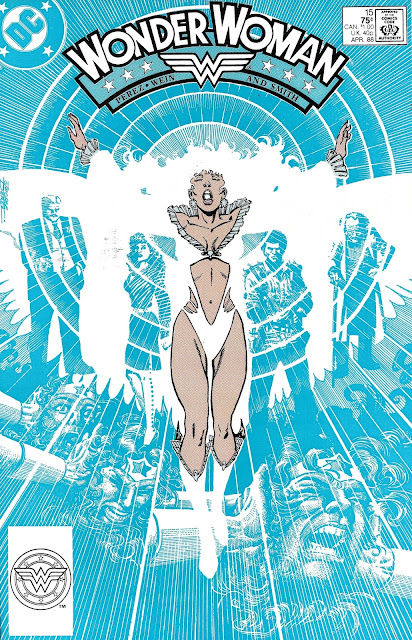 Next up we have Perez, Wein & Patterson a little over a year into their run and at this point things have really started cooking. Wonder Woman's powers and supporting cast are firmly in place and a few adversaries have been set up…most of which have also been knocked back down.

This issue introduces the Post-Crisis version of the Silver Swan, a character originally created by Roy Thomas and artist Gene Colan back in 1982. Perez takes their concept and changes up her origin a bit, still adopting the mold that Thomas used: Hans Christian Andersen's fairy tale of The Ugly Duckling.

But before we can get to that, there's a bit of what back then I saw as silliness to get out of the way. John Byrne over on the Superman title was working with Perez to build up this idea that Supes and Wonder Woman were attracted to each other romantically. Back then everyone knew that Supes had Lois and no writer would destroy decades of history (that never happened since Crisis removed all of it) with Clark's woman of his dreams. 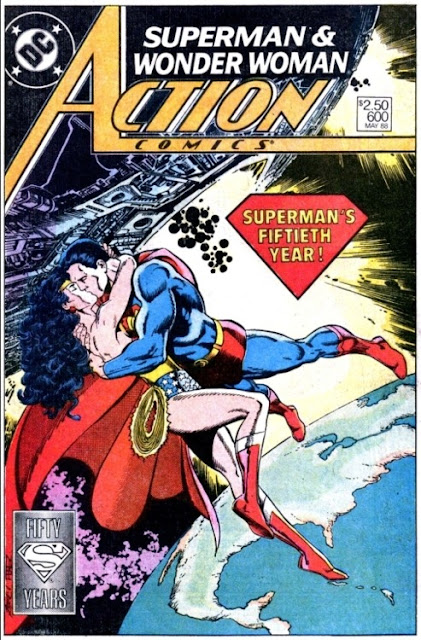 This occurred decades before The New 52 did exactly that, thrusting the two superhumans into a partnership outside of "work." However, in 1988, no one was buying this idea. Not to mention the interaction between the two prior had been brief and unmemorable. It was a red herring to pump up sales for Action Comics #600

Which, for those of us who bought it off the stands, was one of the biggest fake-outs ever. Superman kisses her, she pulls away and gently tells him they are just friends. Totally "Super-Friend Zones" him.

At least we have Perez doing the panels for this bit of nonsense in this issue. 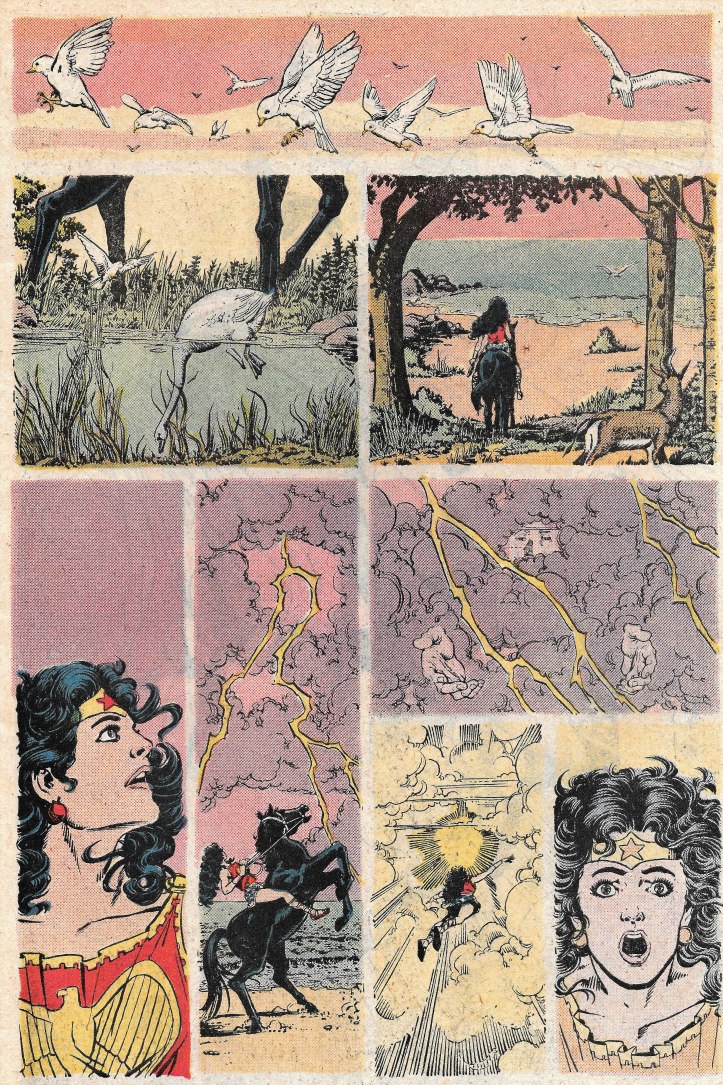 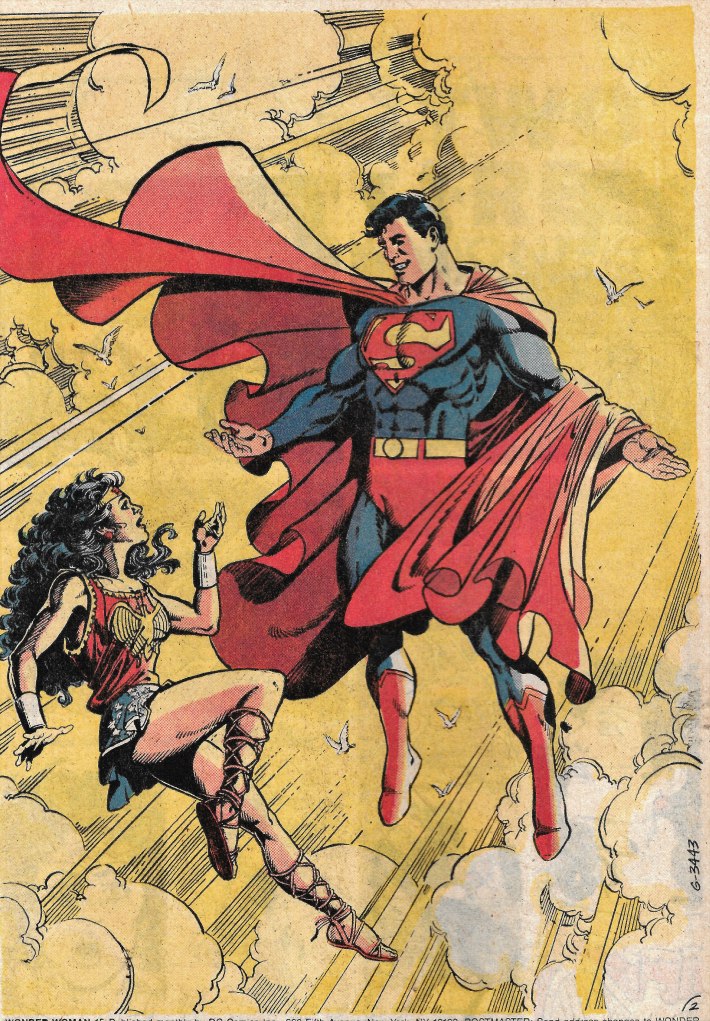 Not certain who is doing the inks on these three pages. Patterson takes credit for pages four on, but these three are uncredited. Could George be inking his own pencils? 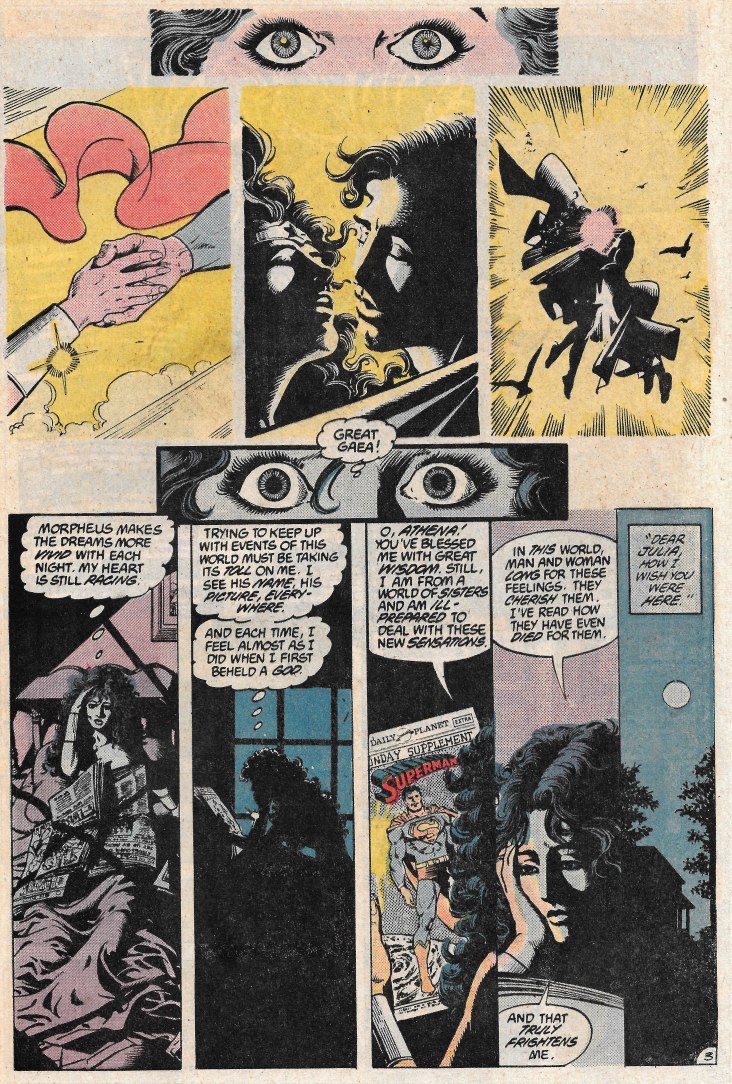 Story-wise, this is Diana's side of crushin' on the other superperson. I enjoyed that she is dreaming of kissing him and the resultant worry she espouses over how being in Man's World has brought on new feelings. She states she's unprepared for the type of relationships that might drive one to cherish and sacrifice in the way hetro lovers do. It is very eye-opening and immediately she has your sympathy.

From there we move our focus off of Wonder Woman and, just like issue 12, we stay off of her until right near the end of the issue. This book is all build up and introducing characters we will grow to care about. In that part, the issue does a great job. It's just sad that my first two Perez books about Wonder Woman contain so darn little of her doing anything.

Instead we get this rogue stealing information from Ogawa Electronics about a person called Valerie Beaudry. Information secured under the password "Silver Swan." With the info in hand, our thief is interrupted by a passing security guard, who seems quick to whip out his gun… 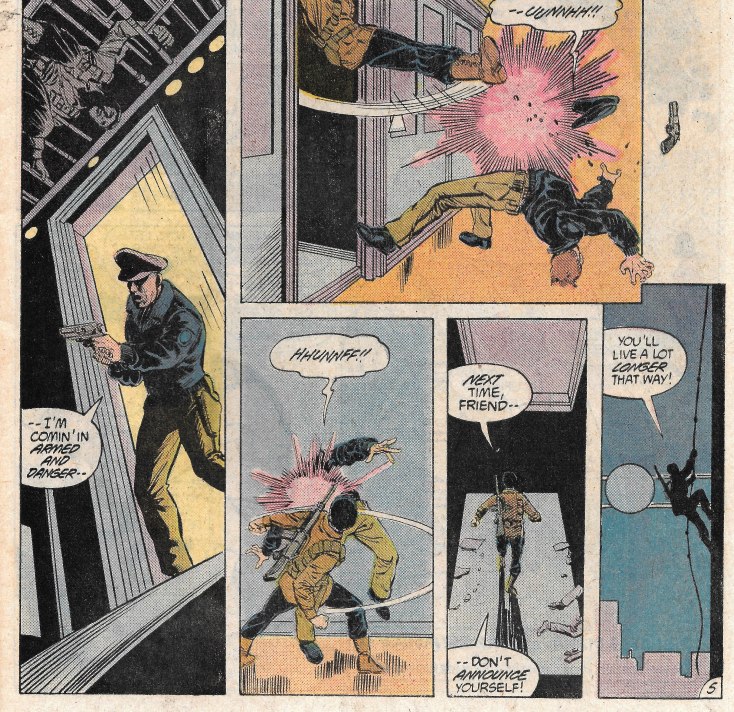 …even if he is too slow to actually get a shot off. This bit of corporate espionage and our mysterious perpetrator will be explained in just a moment.

But first we have to survive an interlude with Mindi and Skeeter, the heads of Mayer Publicists, the firm that represents Diana. They are putting on a fair with all the money going to Charity. I get a Funky Flashman type sleazeball vibe from the drawling Skeeter. Only time will tell if I'm right. 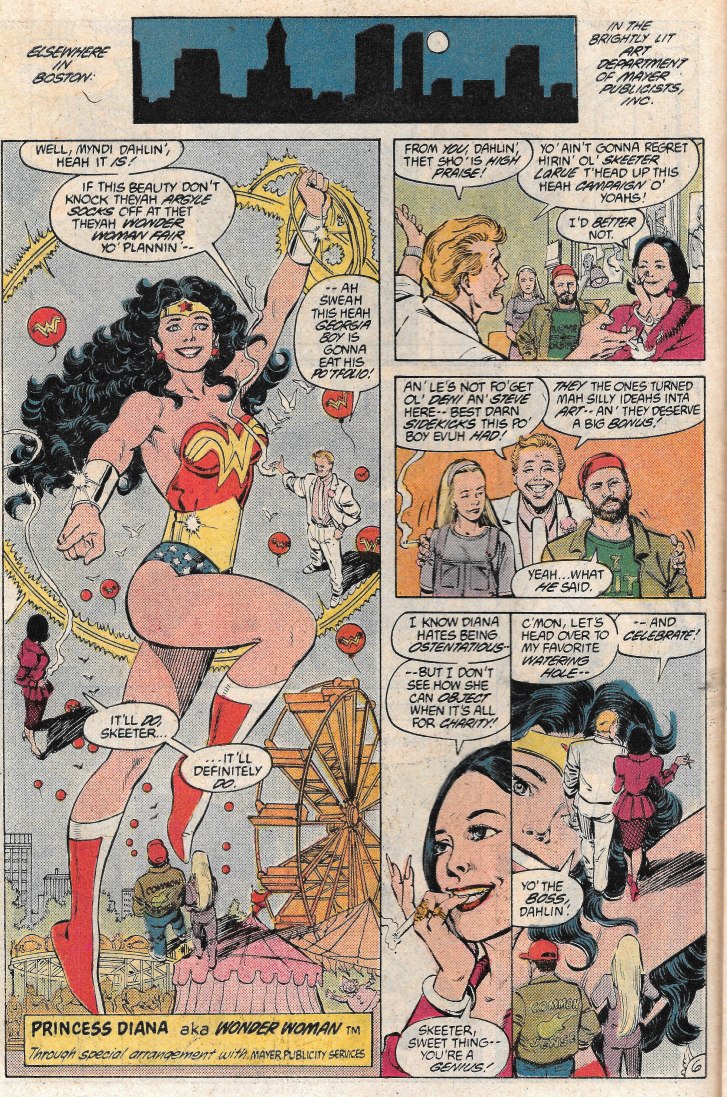 Nice picture of Wonder Woman, though. Unfortunately the two that painted it confirm that my bad guy sense wasn't mistaken. Appears that Skeeter stole the idea of the mosaic and more. This is build up for next issue, I'm certain.

Enough of that, because now we meet our main character of this issue. Maybe not in name on the banner-head, but in number of pages devoted to her story, most certainly.
In Boston's Chinatown, this young red-head is trying to phone a woman named "Val," whom the smart money would bet on that being the very same Valerie Beaudry we saw on the computer monitor three pages ago. Sadly Val isn't home and calling her has apparently marked this woman for death by car. 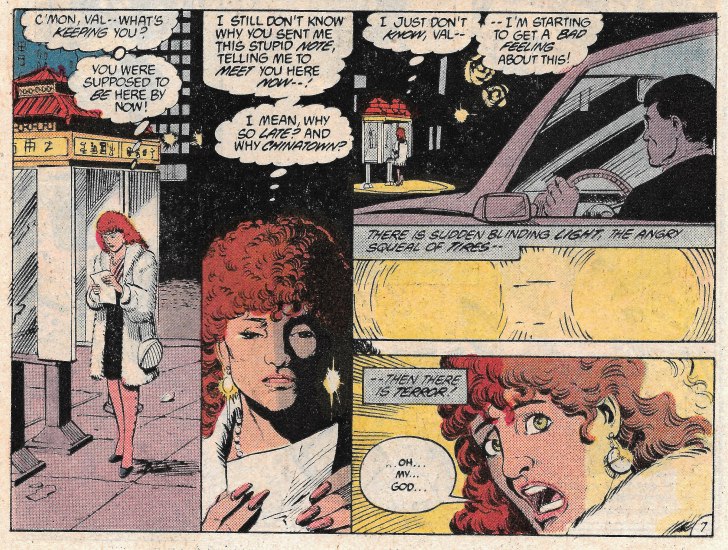 Tonight is her lucky night though, as she dodges aside and the car takes out the telephone booth. That doesn't end its pursuit, however. 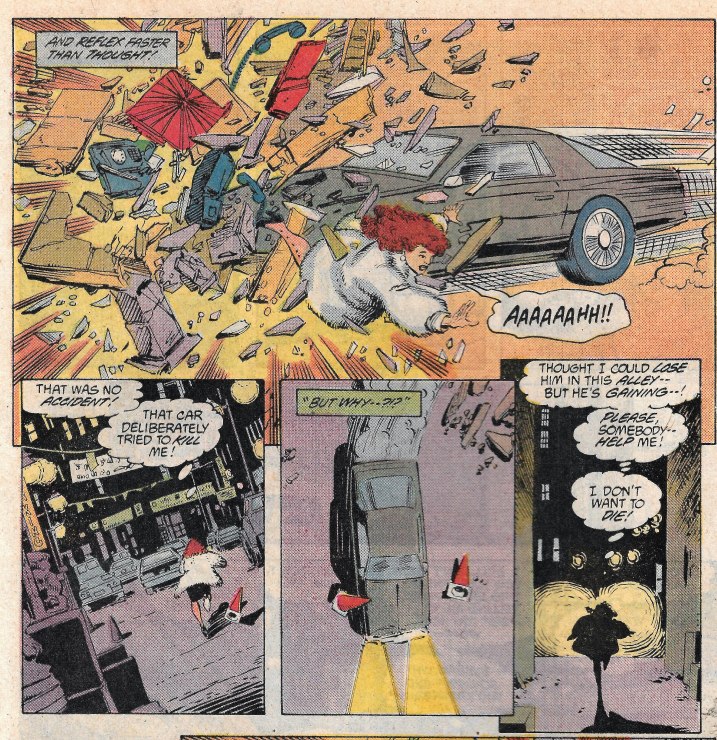 The sound of a gunshot ends what ramming telephone booths at full speed doesn't. 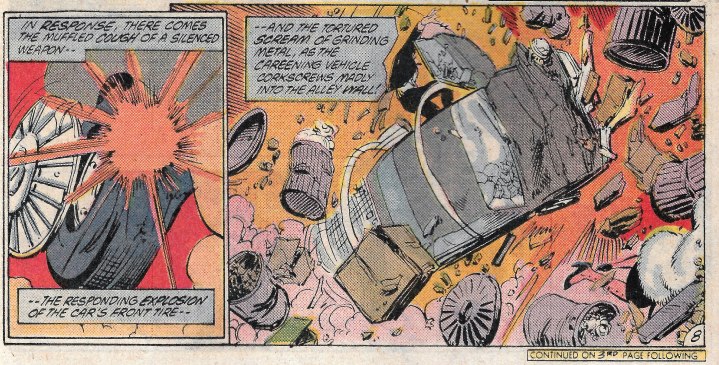 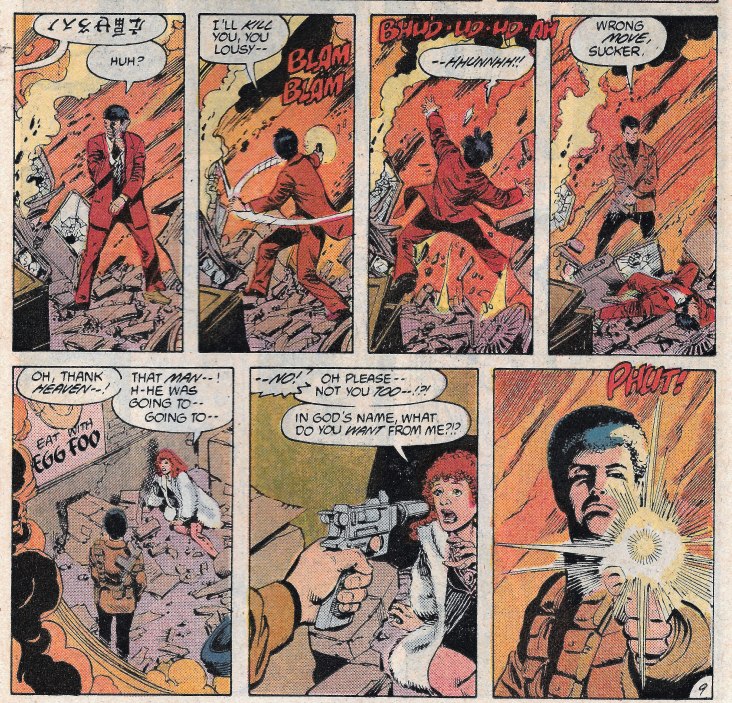 Thankfully shot number two ends his murderous rampage. Look, kids! It's our hero from that break-in who stole all that information…why is he shooting the girl we know is an innocent bystander in all this? Hey! What is going on here?

Well, one thing that is going on here is some really amazingly good panel layouts. Perez certainly knows his stuff and this issue seems tailor-made to showcase them. 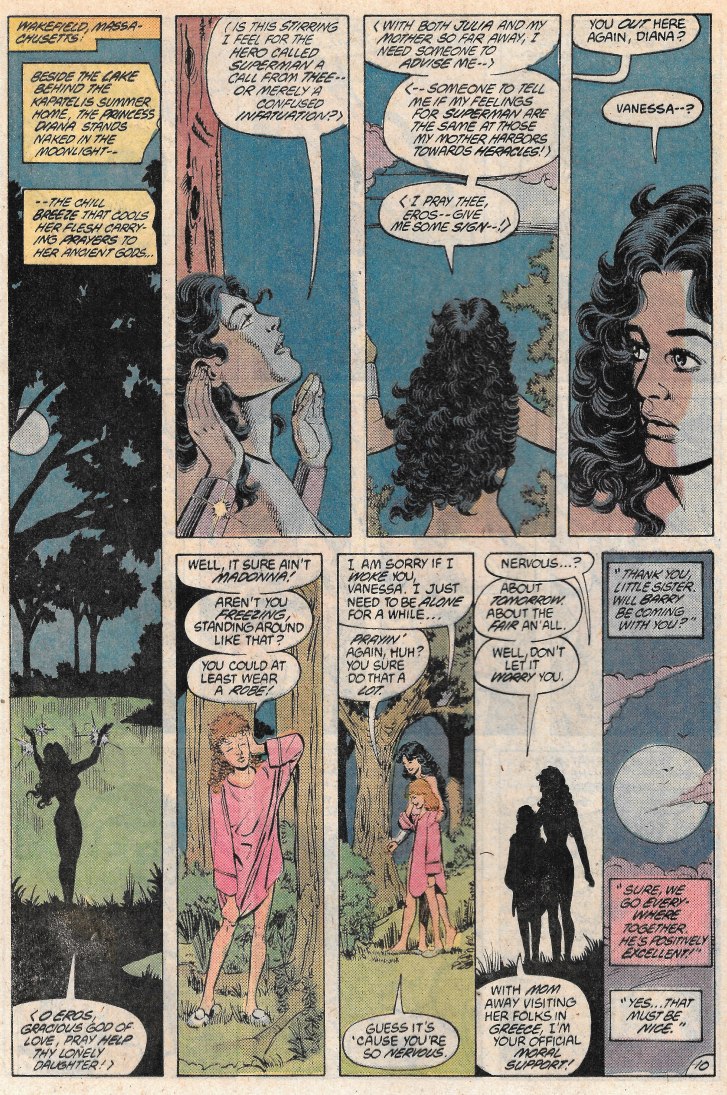 This is an extremely sweet scene and points out the very pro-feminine vibe the book had during this time. Girl catches another girl praying naked by the lake? Treat it with acceptance and understanding. So much of this resonated with the character of Diana that even when other writers took over the series, this was still the core of the character in my opinion. Even in the times that follow that TEST that feeling to the extreme. We'll get to them later. 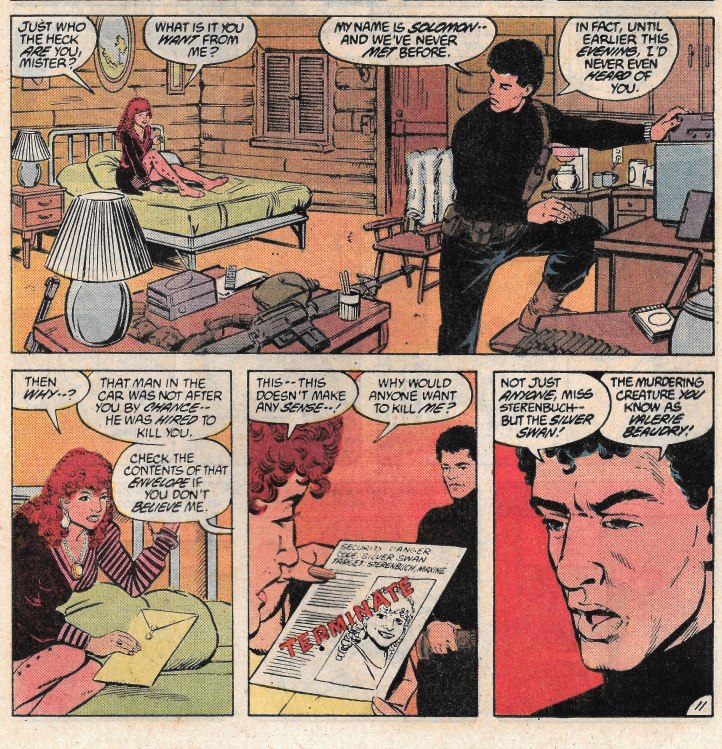 So someone who owns an interest in Ogawa Electronics wants our ginger Miss Maxine Sterenbuch dead. All because she knows Valerie Beaudry, a person Solomon terms is a "murdering creature." Maxine protests that it could not be Val, whom Solomon terms "Silver Swan," and here is the sordid tale why: 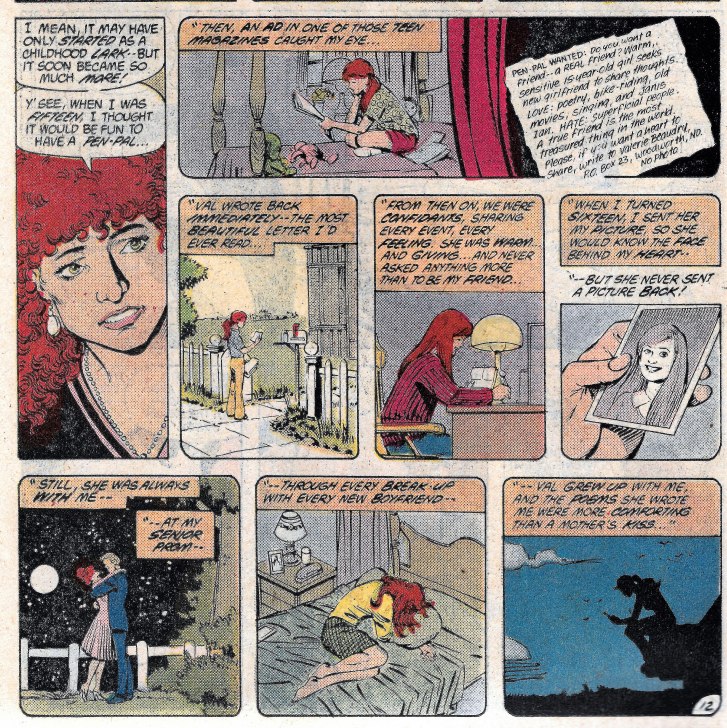 Yet her friendship with Val doesn't end there. Maxine keeps trying to "connect" with her. 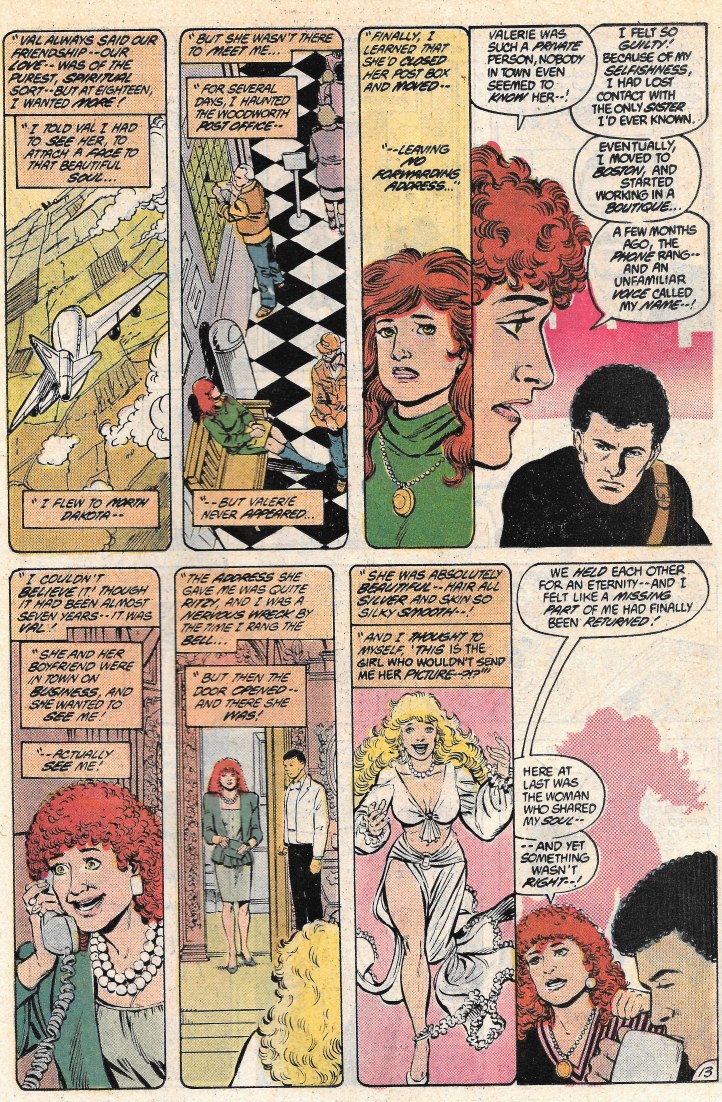 Until finally she does...but things aren't the same, exactly... 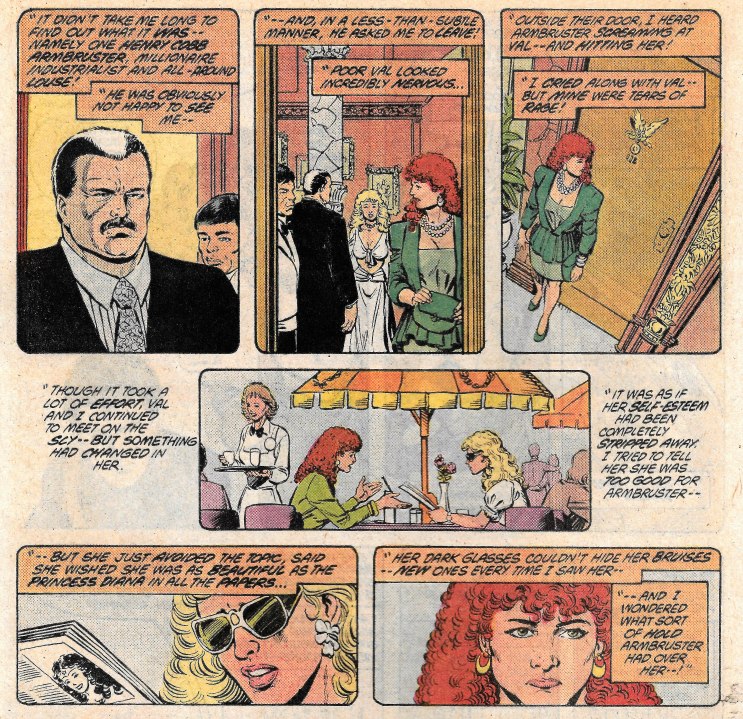 Something about her odd manner seems to be coming from this skunk-haired man, her new husband. And Val appears to be harboring mental issues surrounding how beautiful she looks, constantly comparing herself to Wonder Woman.

Solomon takes all this in stride, even the part about Maxine receiving a fake call to meet Val that turned into that car trying to mow her down. He also exposes the shocking secret of Val Beaudry. 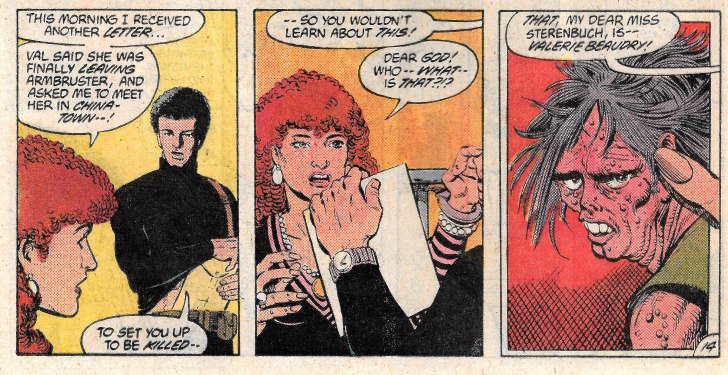 Yuck. Er…yeah that looks like a troll or something. Solomon explains Val's parents were both exposed to nuclear tests leaving Val as you see her. Then five years ago she was subject to the "Silver Swan" experiment from a division of Ogawa Electronic. It made her beautiful and gave her Mutant Sonic-Disruption Abilities (emphasis Solomon's).

Why is Solomon so interested in finding Val? Take a look below. 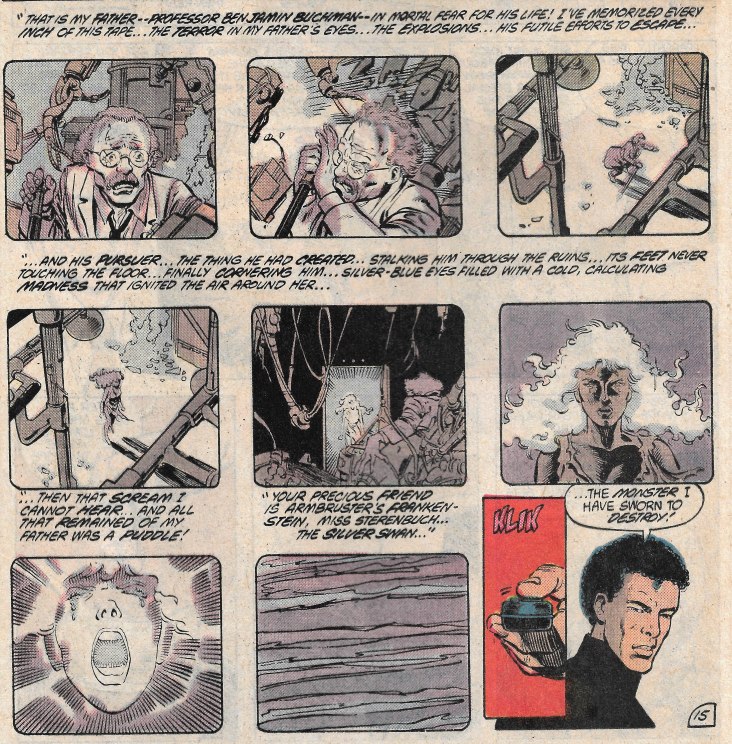 So: his name is Solomon, she killed his father, she should prepare to die. Meanwhile, skunk-haired husband Henry Cobb Armbruster is planning on unleashing his brainwashed wife on Wonder Woman at the fair, something that will earn him a cash reward from someone, it appears. 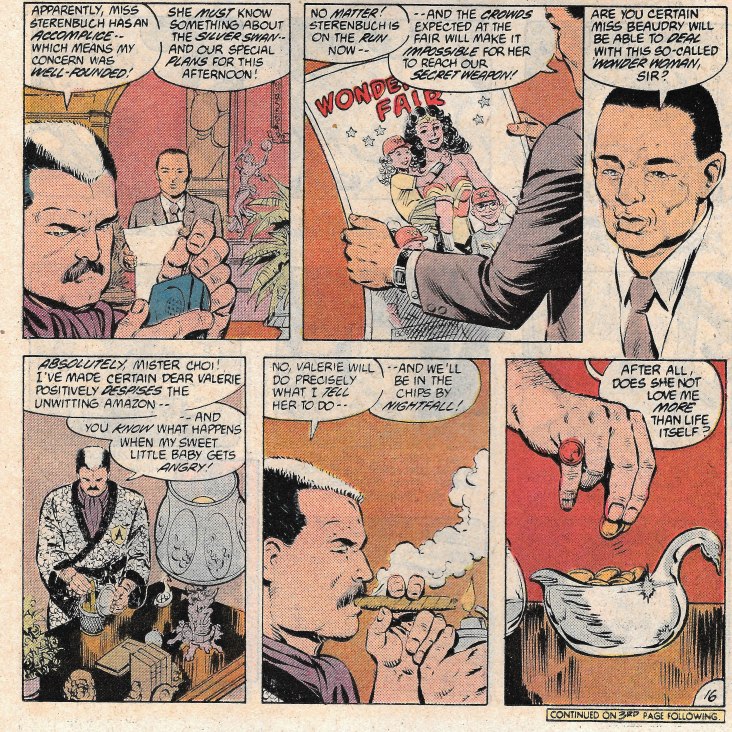 We turn back to regular cast members Etta Candy and Steve Trevor. Etta is upset because she is still pining for Steve. During a routine physical, she mopes because she hasn't lost enough weight (girl, we all have been THERE!) and how can she compete with Wonder Woman for Steve's affections. At the fair, Steve bumps into this gaggle of children of an acquaintance, who are just ASKING to be put in danger later on in the story. The foreshadowing is so thick you can feel it. 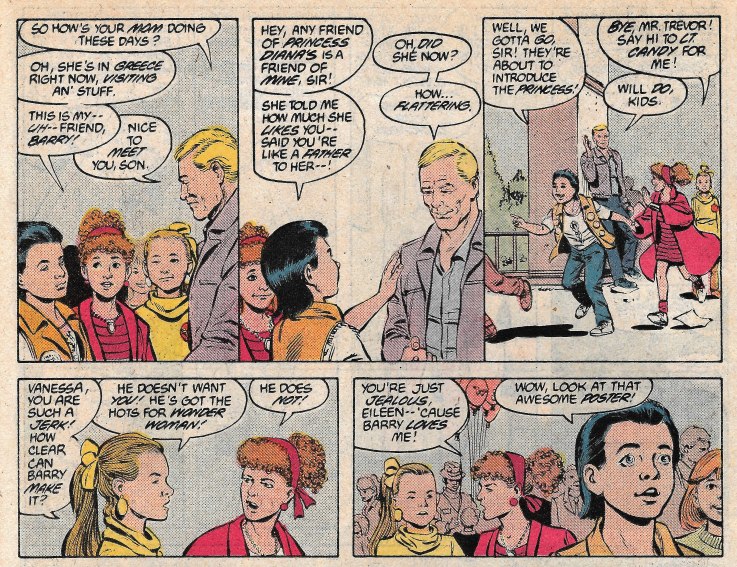 Our promoters get three panels to complain to their boss that the charity efforts are being overshadowed by Wonder Woman's appearance, which is kind of nonsense, but it is a plotline that might have a payoff later, I assume. It's at this point that Diana flies in and makes her entrance. 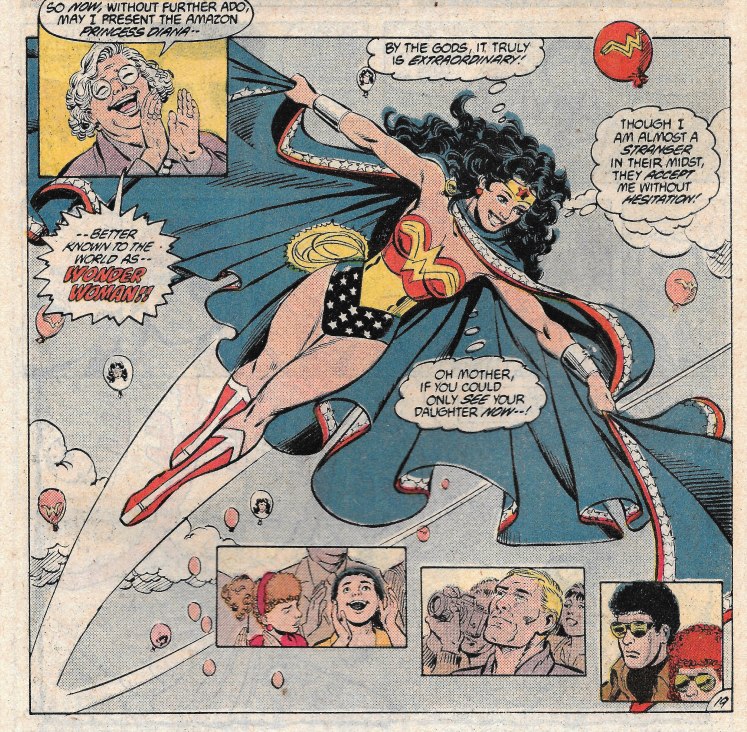 I had kind of forgotten she was in this one. Seriously, this is like page 17 of a 21 page story. It's like she's guest staring in her own title. At least these final pages have some amazing action. Because as Diana wonders if the adulation of the crowd isn't a bit too much and off-the-topic of raising awareness for her charity, this happens. 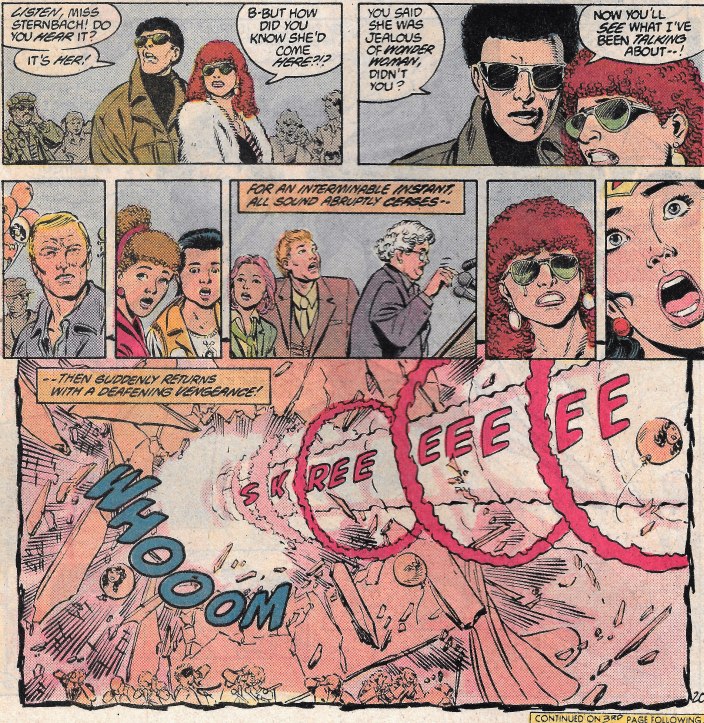 Val swoops in as the mutant powered (hey, they said it. Not me.) Silver Swan, harboring a deep drink of haterade for Wonder Woman. Solomon is held at gunpoint by one of Armbruster's men. Wonder Woman tries to talk sense into Val. That's when all H E double-hockey-sticks breaks out. 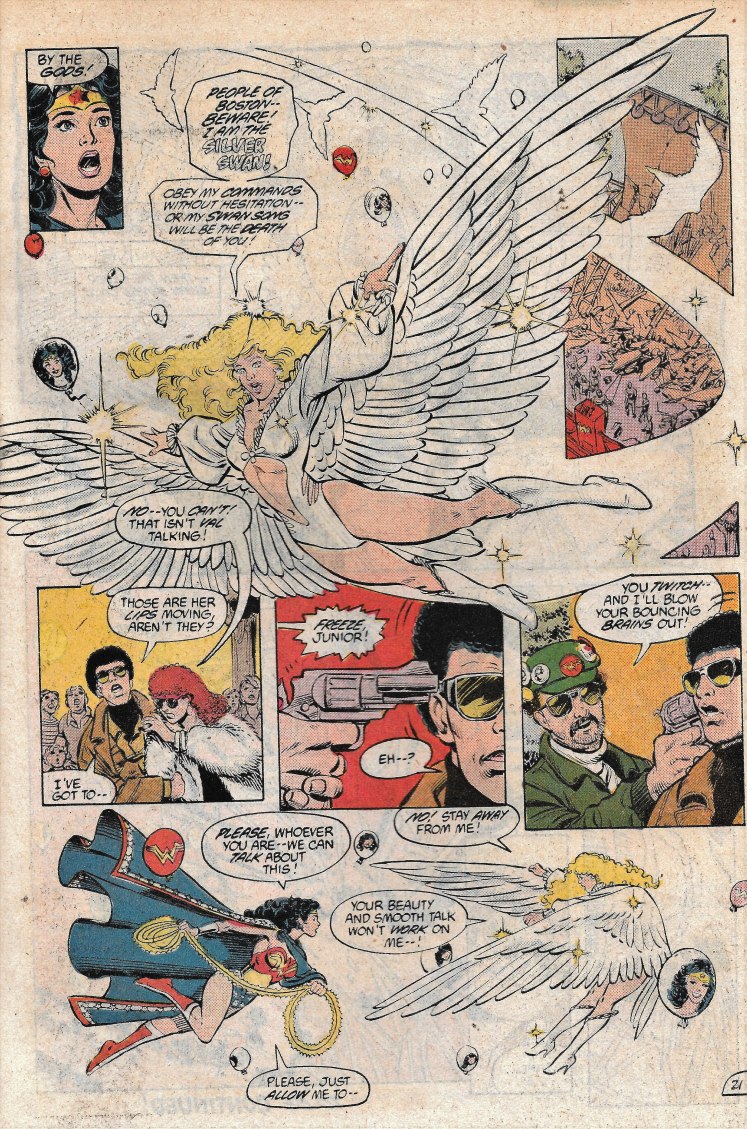 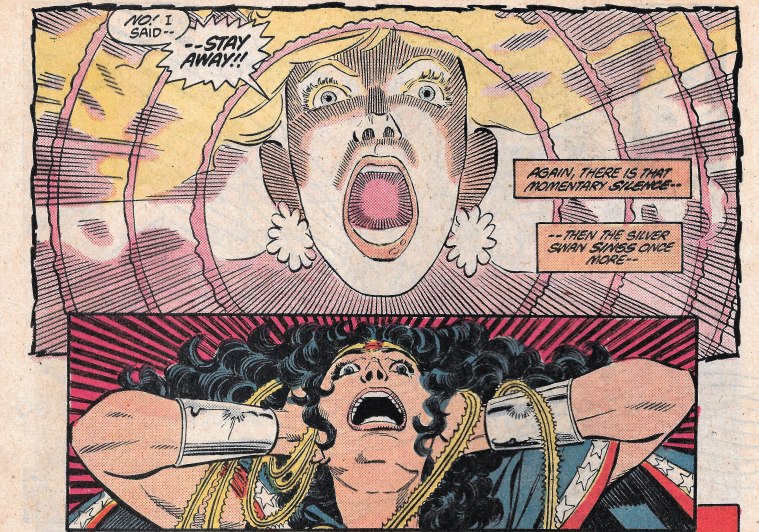 …which looks to incapacitate her in some manner. Unfortunately she pours it on a bit too strong, leading to unforeseen disasters. 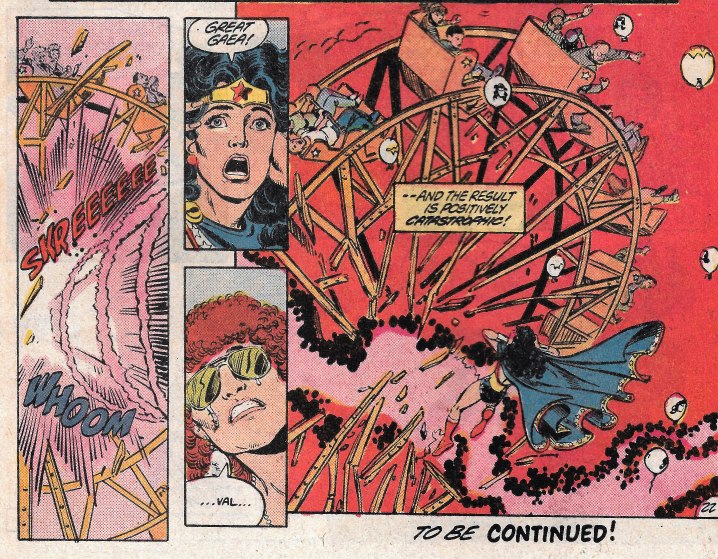 And that's where we end.

So how was this one? It was laser focused on telling its story and I can respect that. The build up to the reveal of Val as the supervillain was great and understandable. I even enjoyed all the side trips with the various other character that inhabit Wonder Woman's life.

The only thing missing, it seems, was Wonder Woman herself. I was really looking forward after those first pages, to seeing her spend a lot more time exploring those feelings and what they meant for her. She has a page where she is obviously still trying to understand what emotions she is carrying around, but we never hear what is going on inside her head.

For what is ON the page, it is a good tale and an opening to a next issue battle that has me really curious as to how Val is brought over to the "Light Side." It isn't this story's fault that it arrived as Byrne/Perez were gearing up for the big kiss issue of Action Comics, I suppose. It's just sad that both things had to fight for space in the same issue.

These are still enjoyable books, however, and I'm really loving the things I DO see in Wonder Woman. We just need to see more of her.
Posted by SonOfCthulhu at 3:50 AM