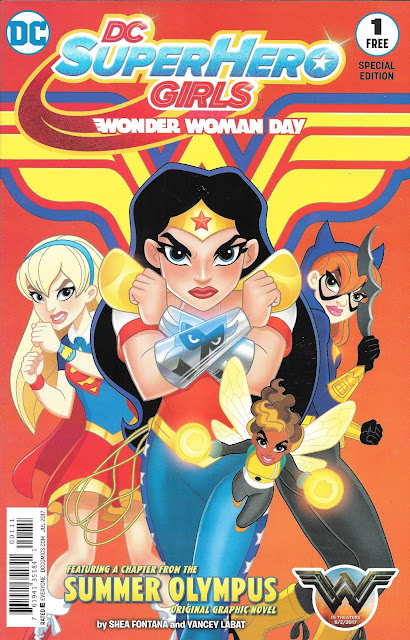 Well, MOST of a bowl of fruit

I had so much fun with the prior Free Comic Book Day edition of DC SuperHero Girls that I thought I would give the Wonder Woman Day issue a spin through the old Crapbox too.

So off we go into what appears to be issue number two of a multipart storyline. The SuperHero Girls broke into three groups for Summer vacation with Bumblebee and Wonder Woman heading to Olympus; Shiva, Supergirl, and Big Barda heading to the Kent farm in Kansas; and Batgirl, Katana and Beast Boy taking in the sights in England. Each has a set of adventures lined up for them and they all look to be quite a bit of fun.

We begin with Wonder Woman and Bumblebee in Olympus. They are busy meeting all of Diana's family. Even the ones who are a bit anti-social. 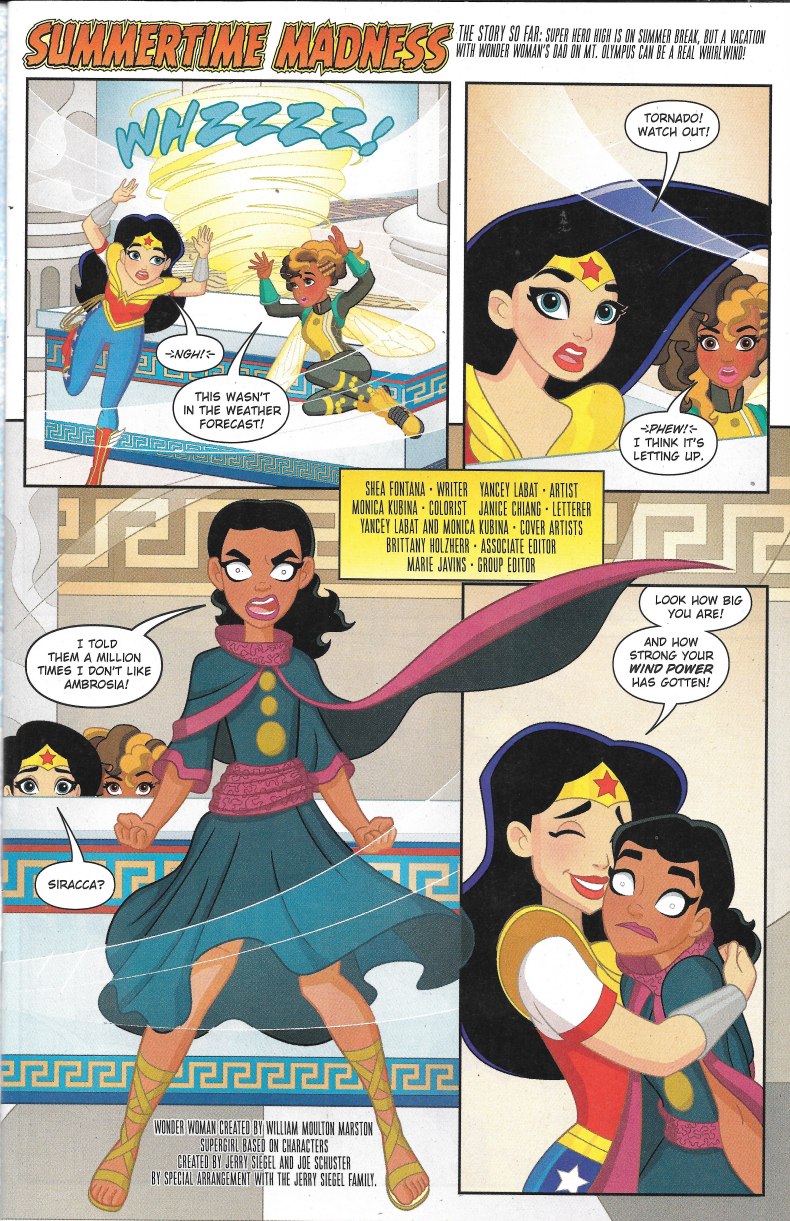 And here I thought Siracca was some kind of new fangled hot sauce. 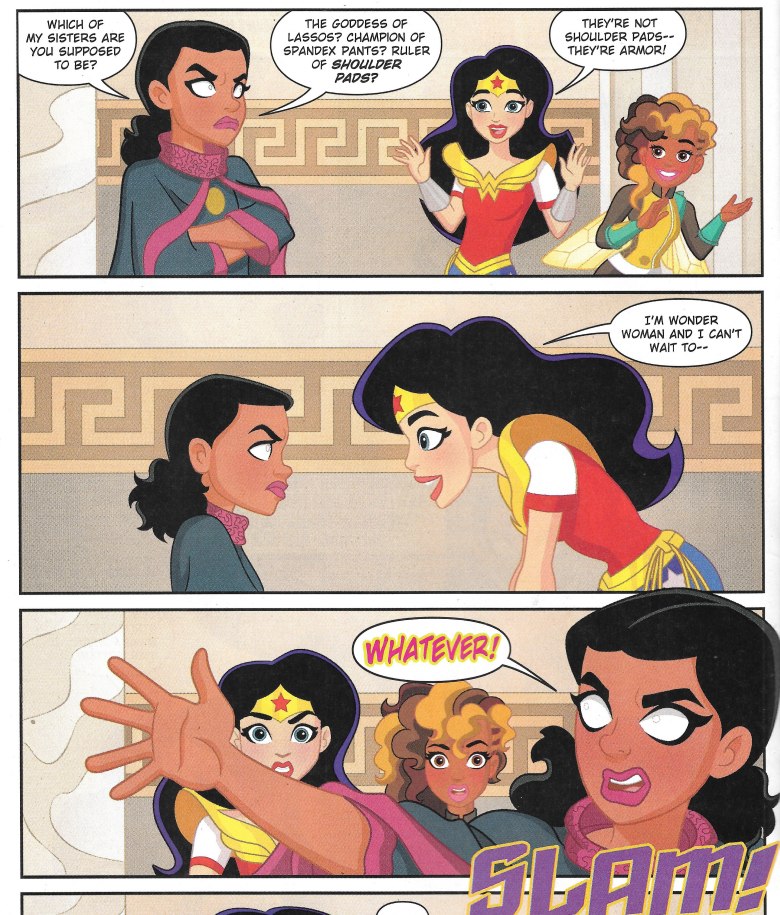 Whatever she is, she blows off Diana and Bumblebee and seems kind of hot under the collar about it. About this point Zeus shows up…

…looking kind of like a muscle-bound Gandalf. He gives Diana a huge bear hug and then starts using his powers to amaze Bumblebee. 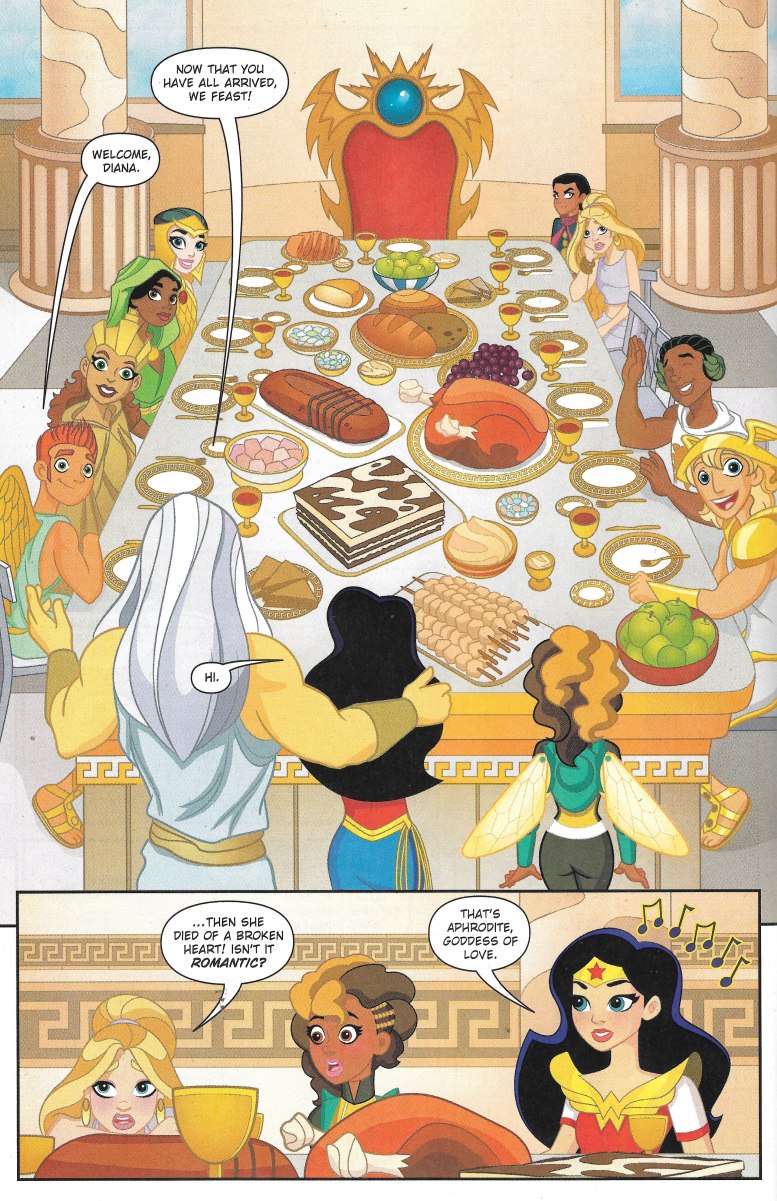 And afterwards, they head into the dining hall where the other Gods have gathered around for the feast. 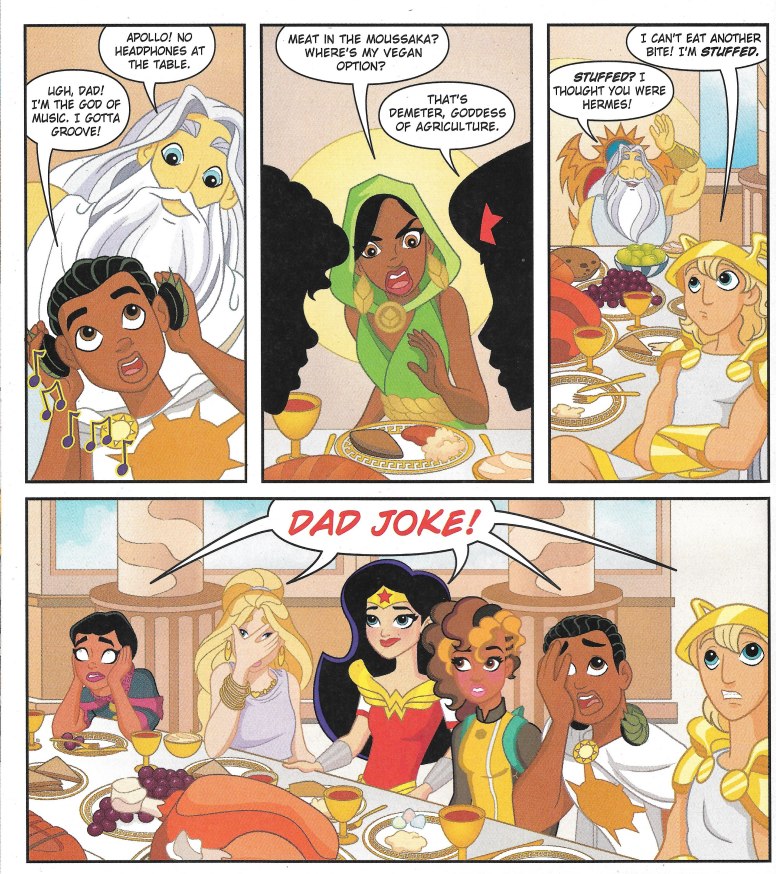 Which proves that dining with the Greek Gods is pretty much the same experience as dining at anyone's family reunion. 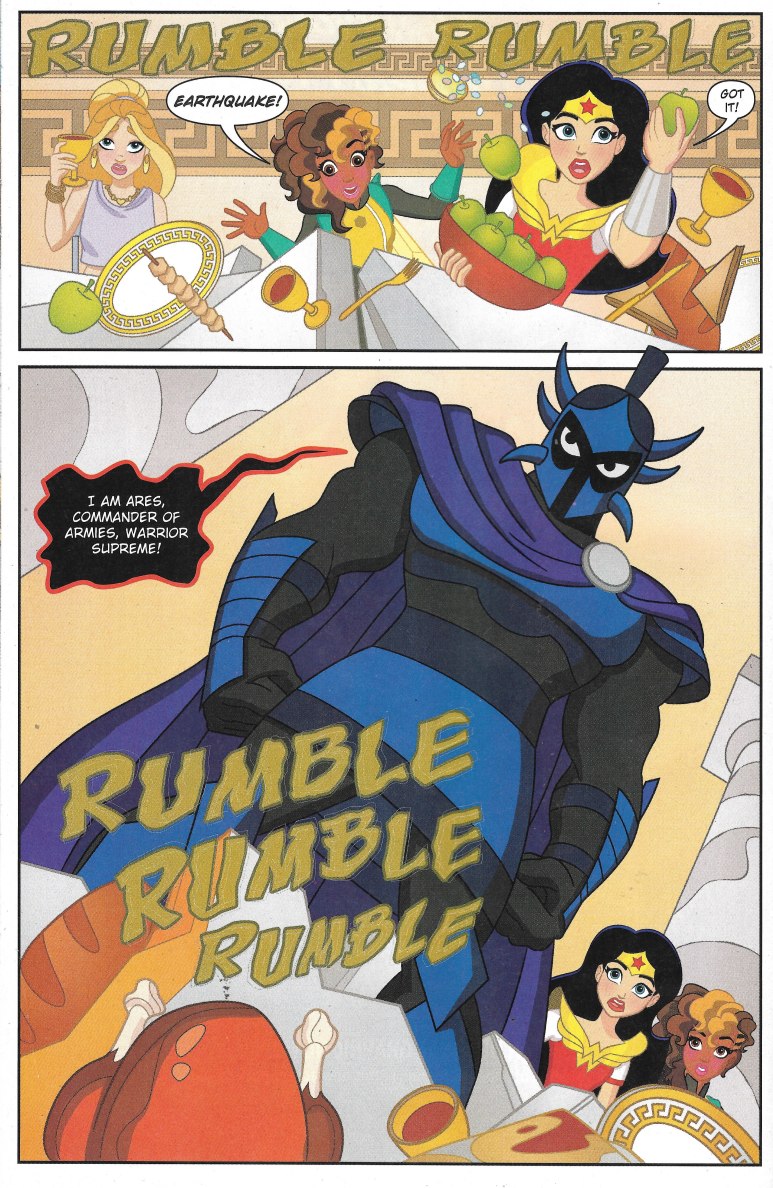 And as with every family reunion, there's always one bad apple who turns up. In this case he turns up while overturning a bowl of apples (good save, Wonder Woman.) 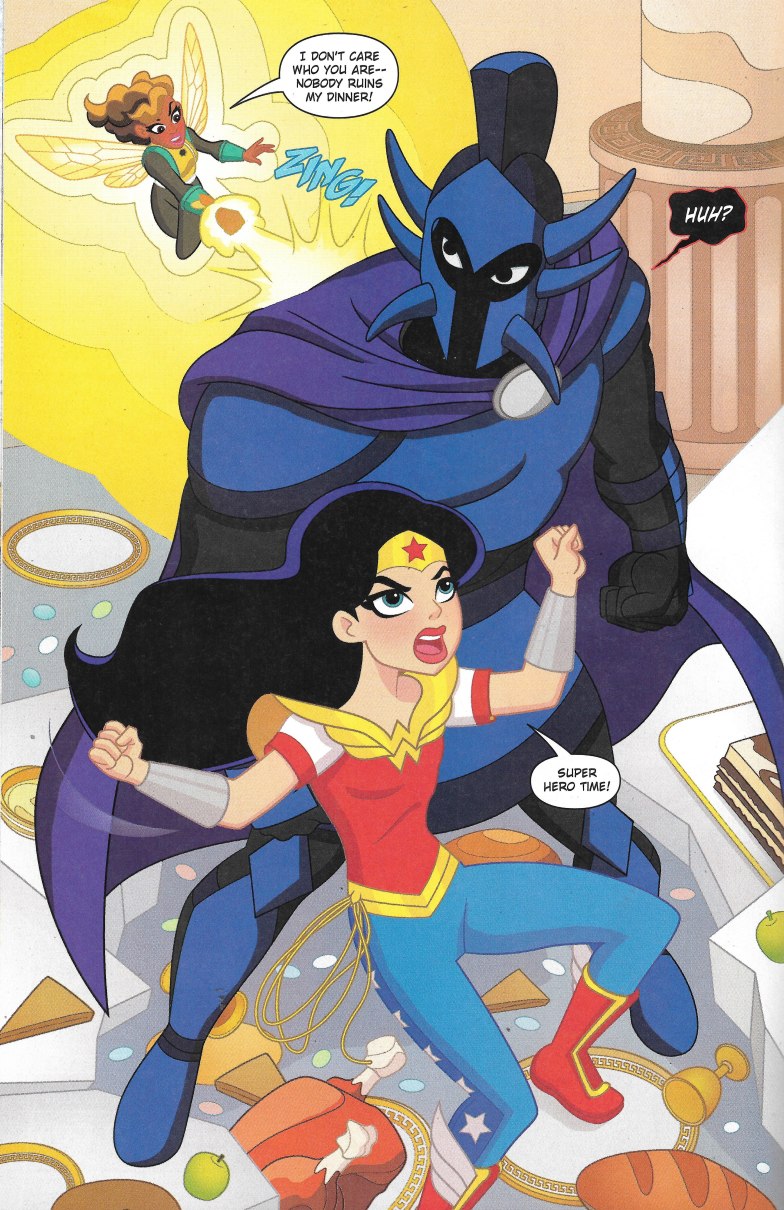 Before you start thinking this will go the way of the AMAZING, FANTASTIC, INCREDIBLE 2017 Wonder Woman MOVIE…just hold on to those horses. 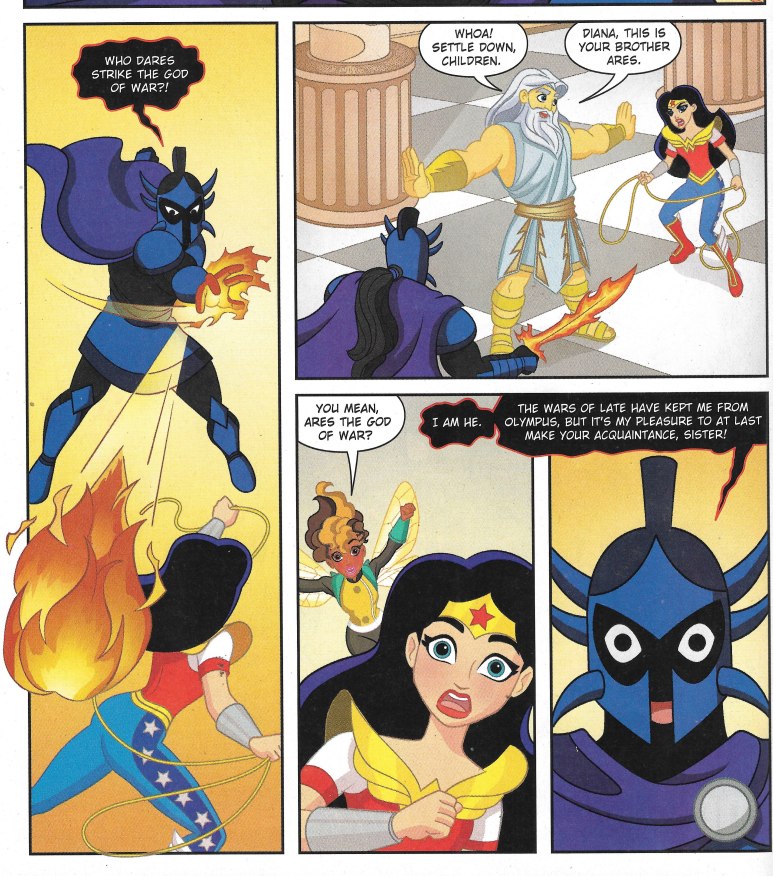 Because old owl-eyes Ares is just part of the family. In fact, given Wonder Woman's status as a child of Zeus, Ares is technically her brother. 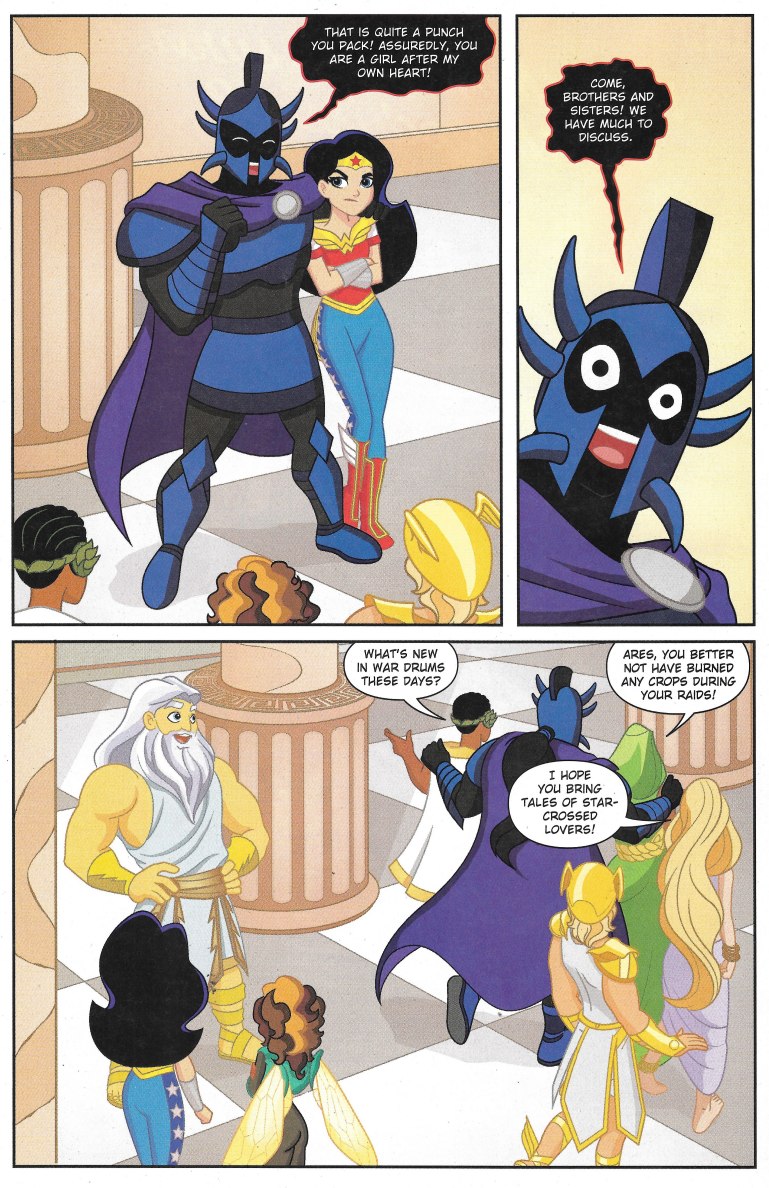 So Ares just wants to hang out and chit-chat before going back to trying to start various conflicts…or something? 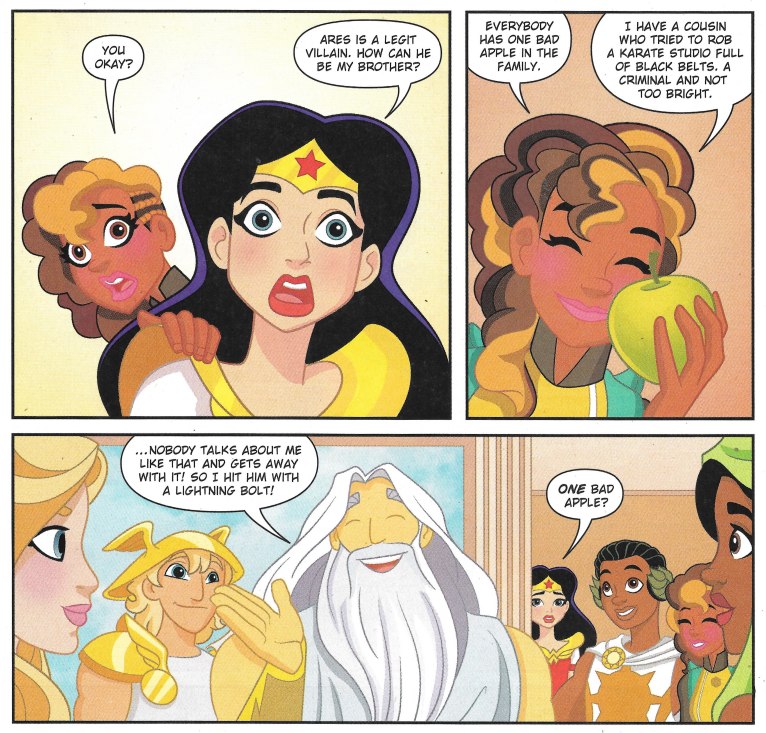 All of this really hits Diana hard, especially given how her Father is also known for his rather dubious exploits. 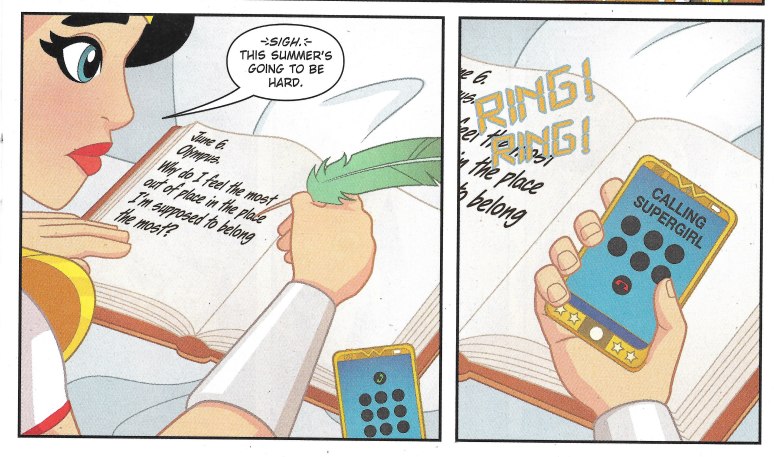 It's enough to make a girl feel darn right uncomfortable. Which it does. Even Bumblebee isn't enough to give Wonder Woman's spirits a lift. That means calling on the rest of the girls to see if anyone else can take the load off for a bit. First up is Supergirl… 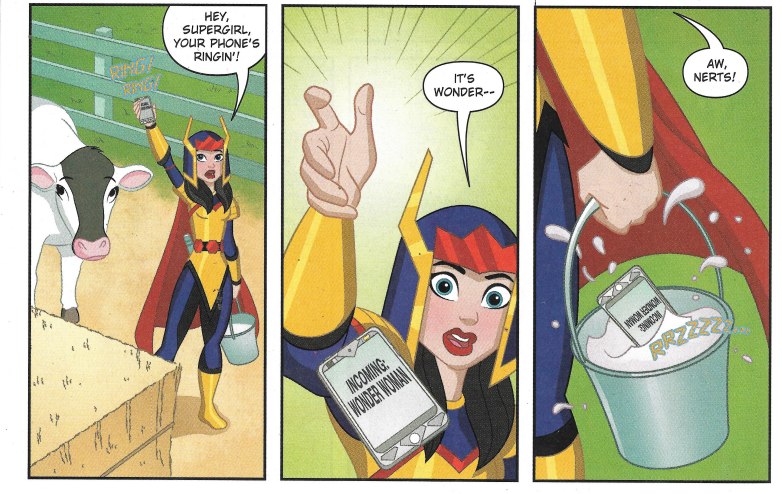 …unfortunately Barda drops her cell into a milk pail. 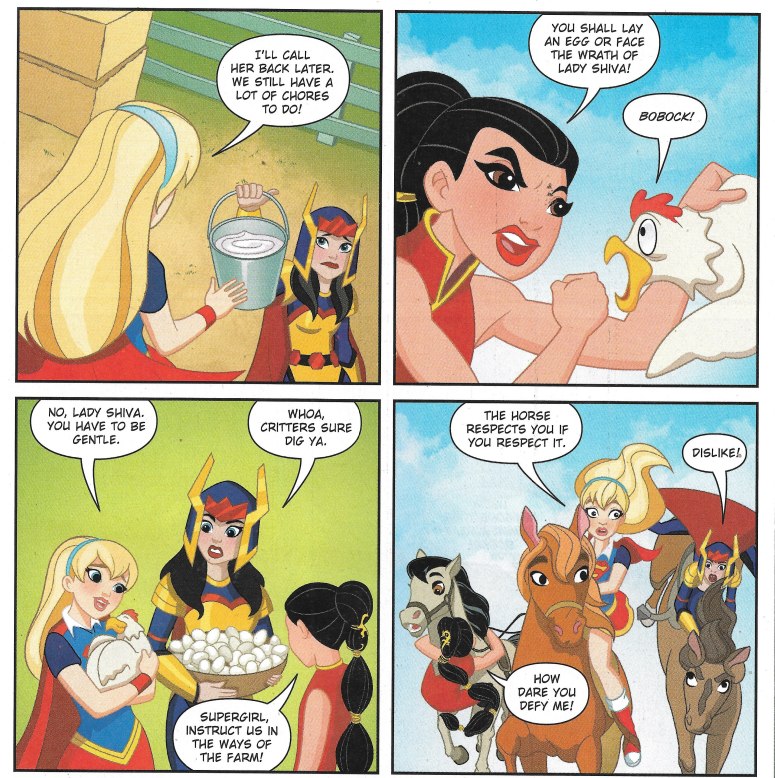 Not that Kara has time for much chatting. She, Barda and Lady Shiva are far too busy working at the Kent farm.
With these two as her helpers, it looks like a "super" tough job. Since she gets no answer from Kara, Wonder Woman turns to Babs. But accepting calls during a stroll of the British Museum is a strict no-no. 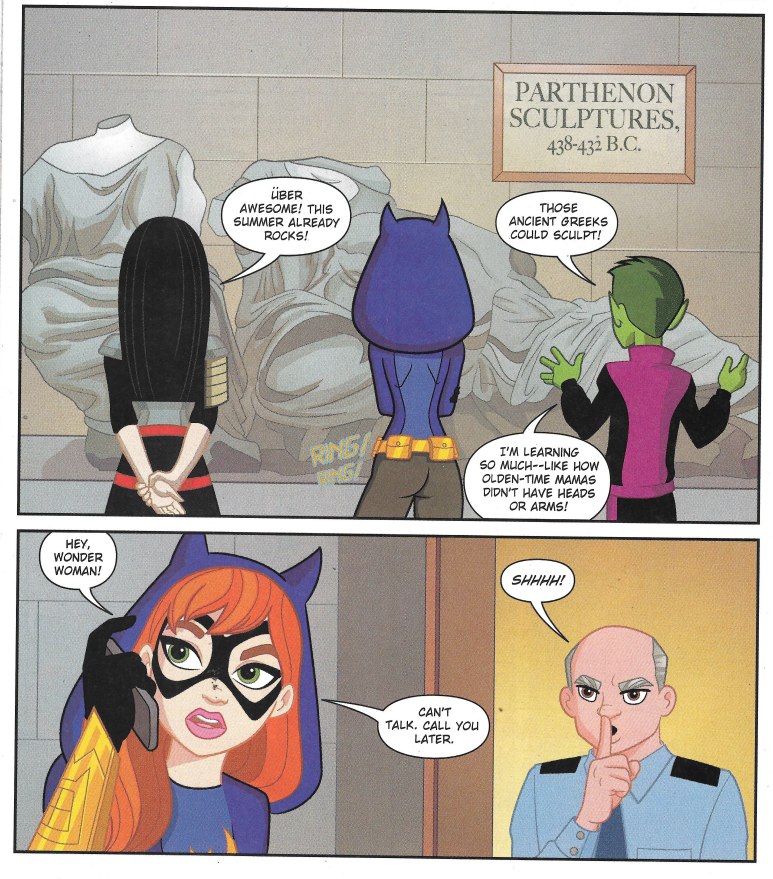 Which Babs fully intends on doing, until a robbery puts all three of these superheroes on the clock. 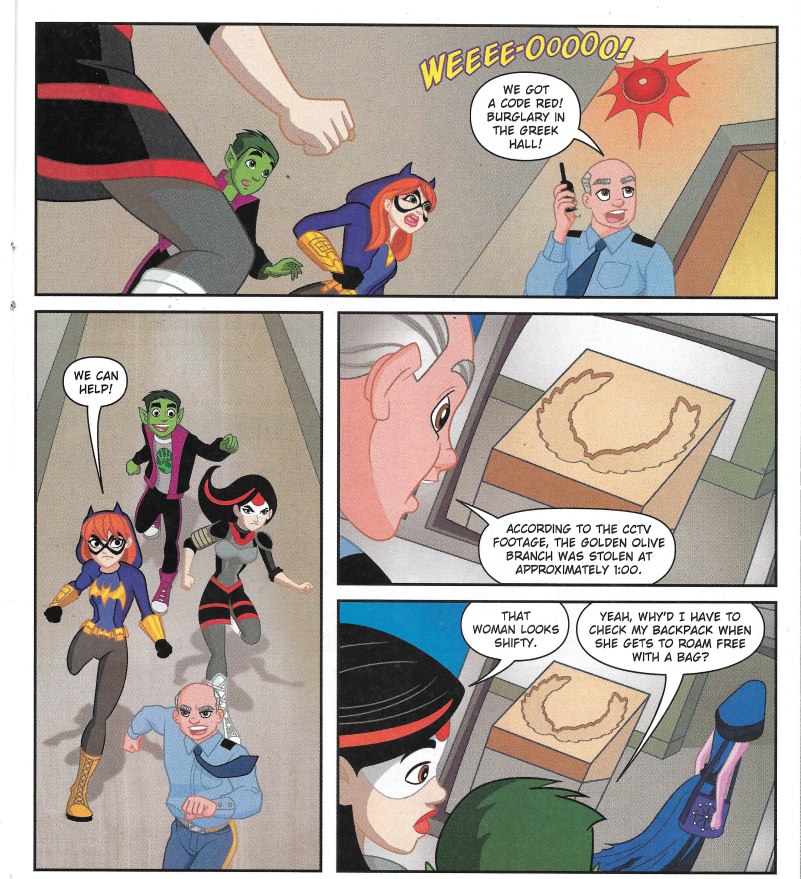 And even if they are too busy to sight-see, that doesn't mean that, we the audience aren't. 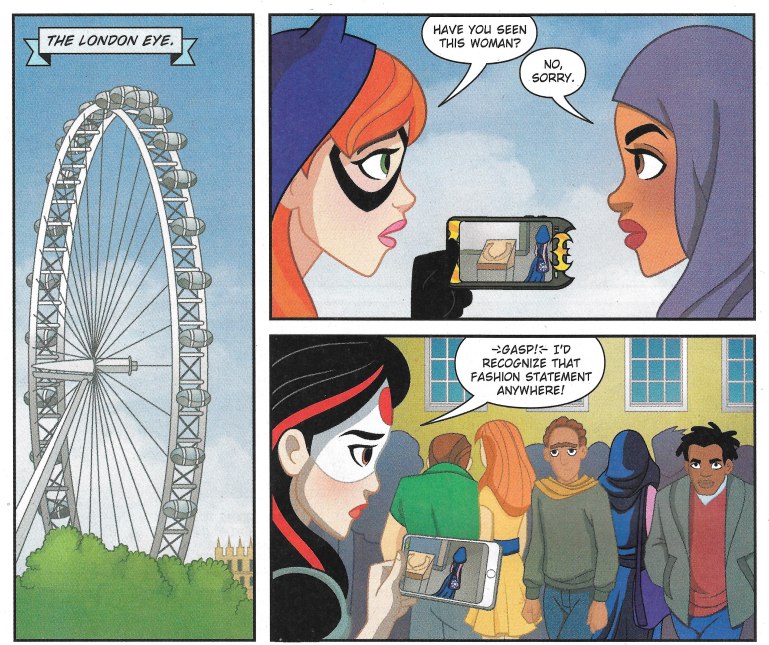 Why, they even stop by Liz's place, who would totally be this cool with superheroes in real life. That woman rocks. 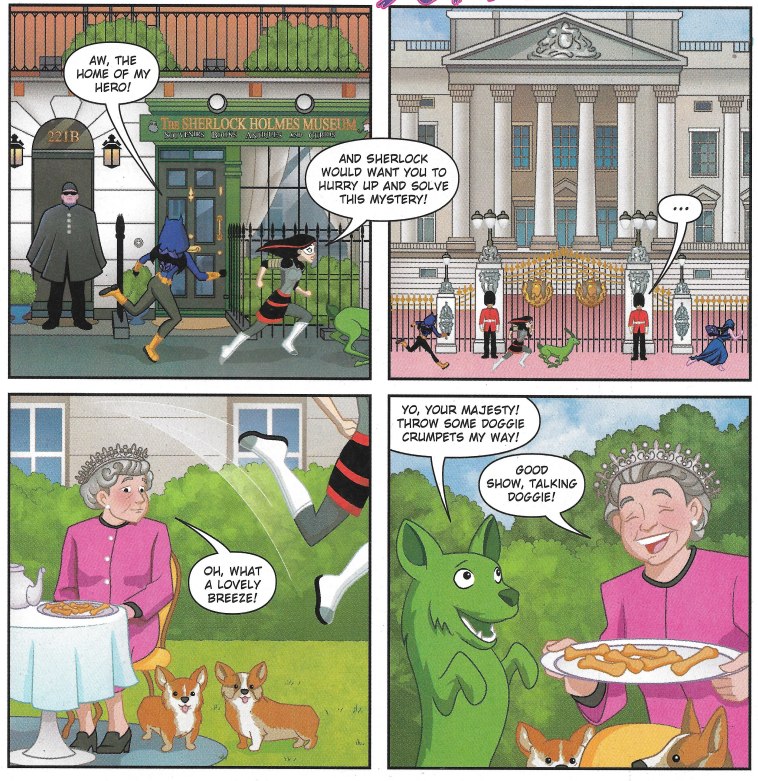 Our bag carrying thief is ready for them using knockout gas in the stairwell of Big Ben to thin out her pursuers. 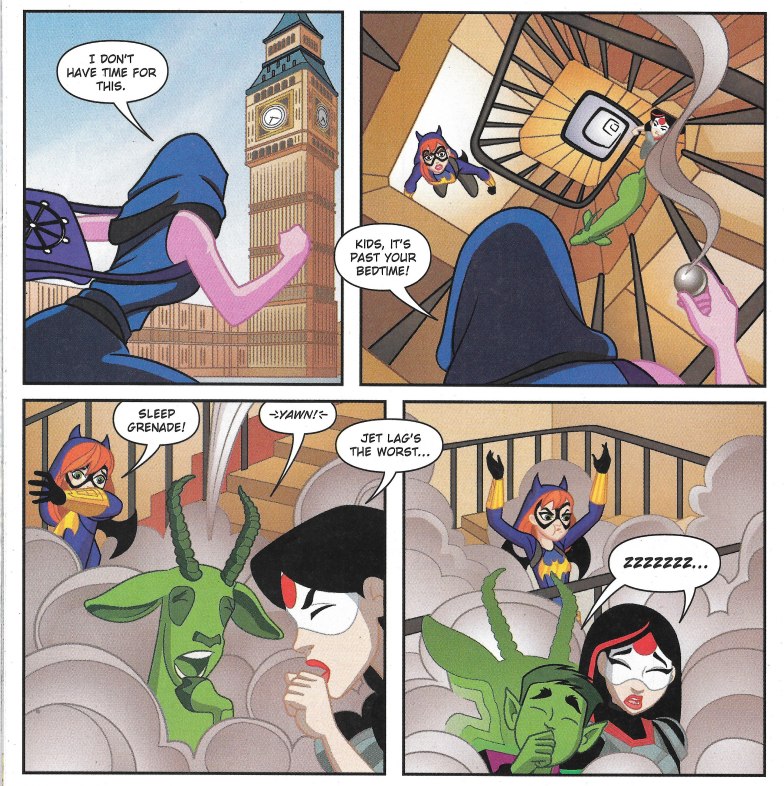 BatGirl isn't sidelined however. At least, not until our unmasked villain kicks her off the tower. Now it's only a matter of time until she falls to her doom. 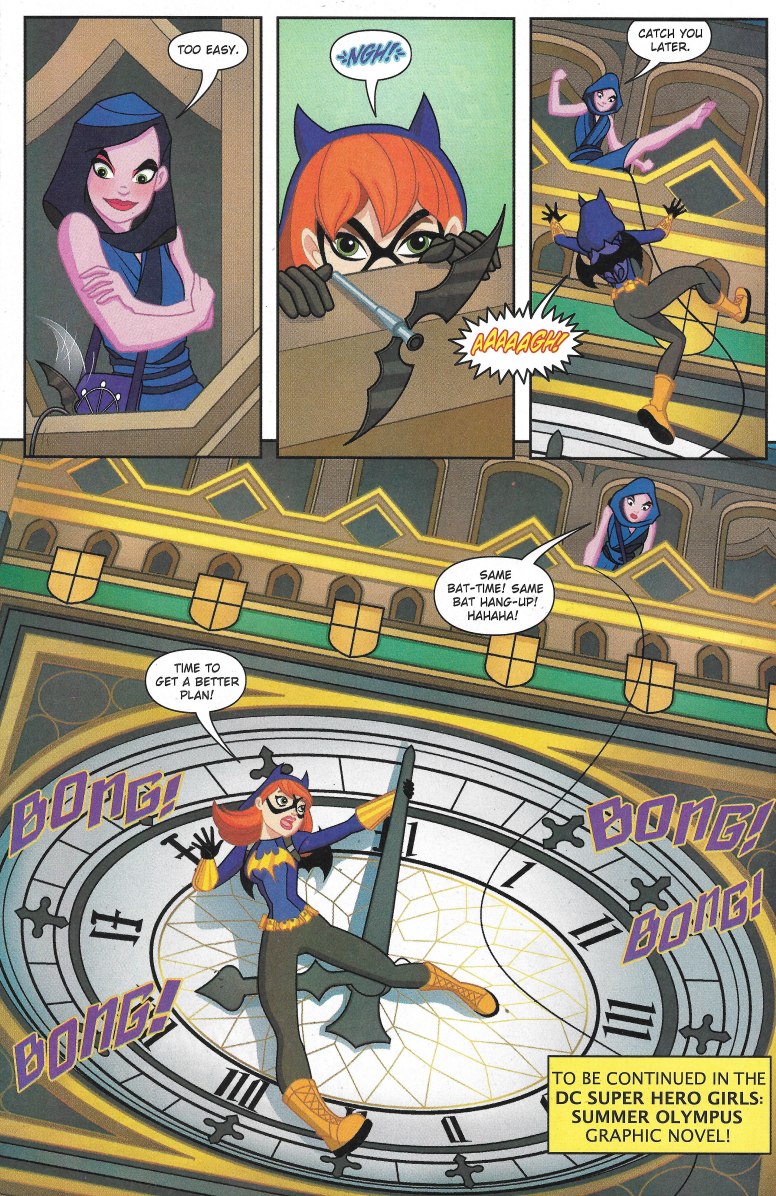 Again I find myself digging these books quite a bit. Easy to read for youngsters, engaging storylines and good introductions to the various characters. Plus they AREN'T silly, stupid Teen Titans GO! Comics. They respect the kids watching them and still tell solid superhero stories.

DC SuperHero Girl comics, you're a Father's hero.
Posted by SonOfCthulhu at 2:55 AM