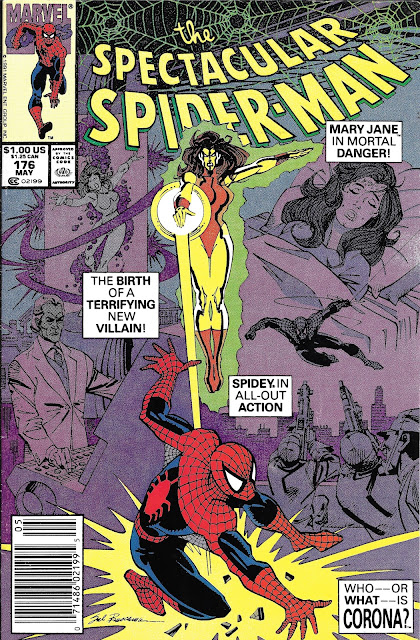 …And we go back over that phrase about power and responsibility

I wonder if Stan knew when he put those words into that comic how that line would impact so many of his readers? I personally have felt it to be the most concise bit of comic book wisdom in existence. It sums up nearly every hero’s journey in the realm of printed fiction.

Stan got it right from day one. And it is not just a well worded bit of personal philosophy, it is also a good character motivation for generating great stories. 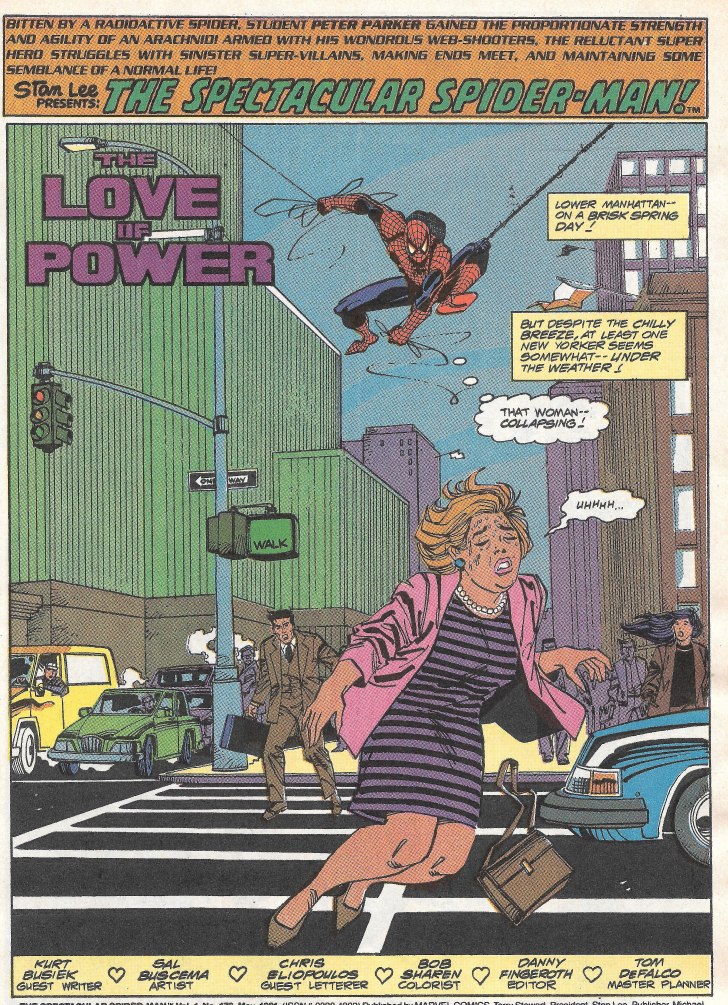 We begin with a little bit of Spring Fever, except this is more like “actual fever that springs upon Manhattanites unexpected in the middle of a crosswalk and fells them in their tracks.” Appears there’s something of an epidemic in the Big Apple that is causing people to unexpectedly collapse. Spidey scoops the woman up and rushes her to the hospital. 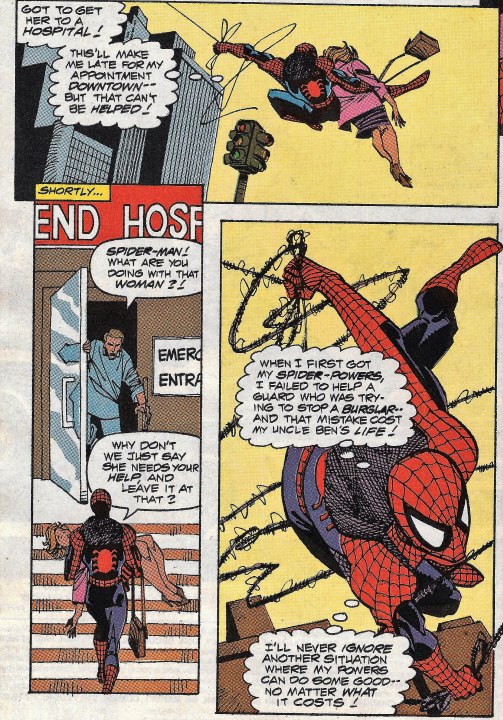 On the way there he worries over missing his newspaper assignment. He’s become more accepted by the populace of due to the Daily Bugle being taken over by one Thomas Fireheart, who promotes Spider-Man as a force for good. Even with the support, however, he still remembers the price of standing idly by and doing nothing.

This is the core of Spider-Man: a burning desire to assuage a guilt over Uncle Ben’s death and his failure to act. He is a hero because he allows his past mistakes to influence how he alters his present and future actions. It’s as if there is a vessel inside him that needs filling, but no amount of lives saved will ever be enough to make up for the volume of what he has lost.

Powers don’t make a hero. An attitude of sacrifice and a constant choice to do the right thing even when it is hard make a hero.

Yet today Parker finds a way to save a life without making any other sacrifices. He arrives in time to accompany Joy on her interview with Cedric Forrester, a very stuck-up scientist working in lower Manhattan on some mysterious super-science project. 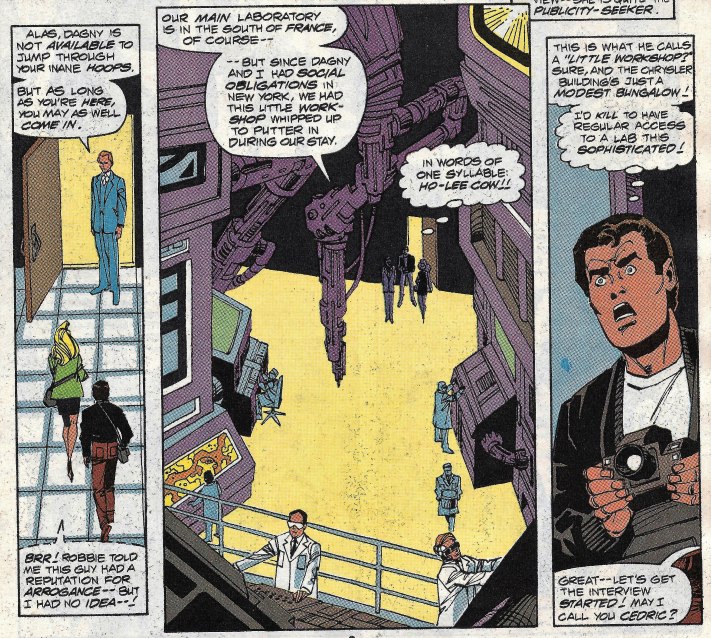 Cedric throws out that the interview was setup by his sister, Dagny and then leads the pair through his lab. Peter is suitably impressed. 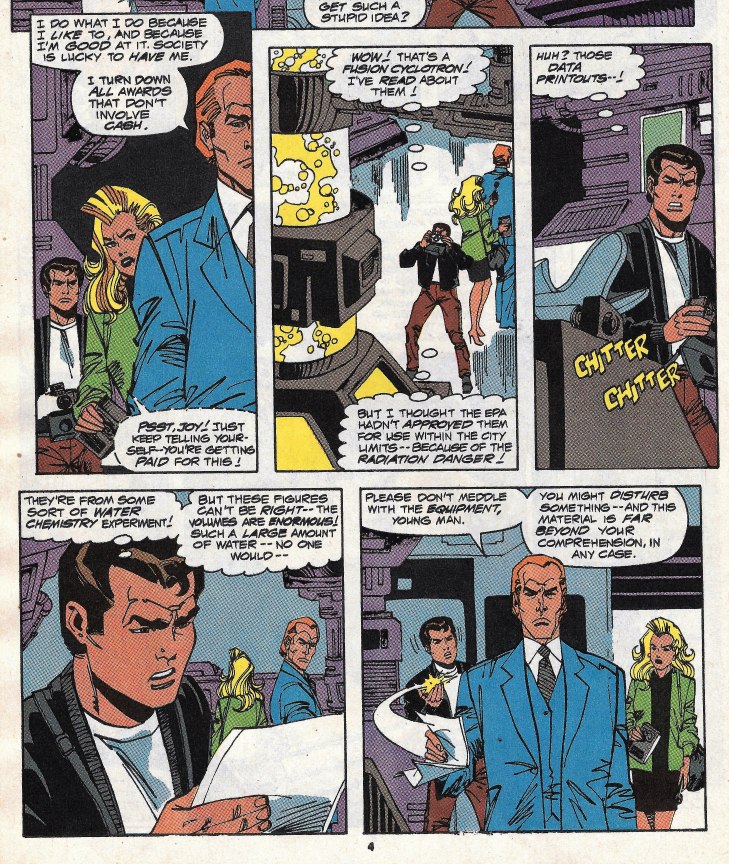 It takes just a few moments for Cedric’s arrogance to rub Peter the wrong way. Not only that, but Pete also notices that a few things in his lab do not appear to be exactly government approved. He doesn’t let on about what he is seeing to either Joy or Cedric. 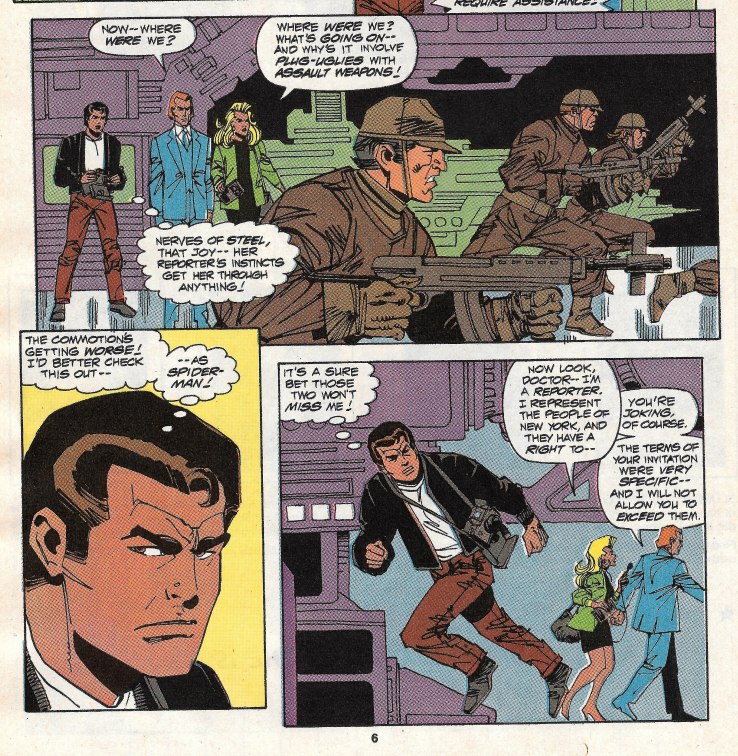 Suddenly sounds of fighting and gunfire interrupt them. Cedric tries to play it all off as armed para-military security forces rush through the lab toward the sounds of the struggle. Pete uses the distraction to make a change of clothes. 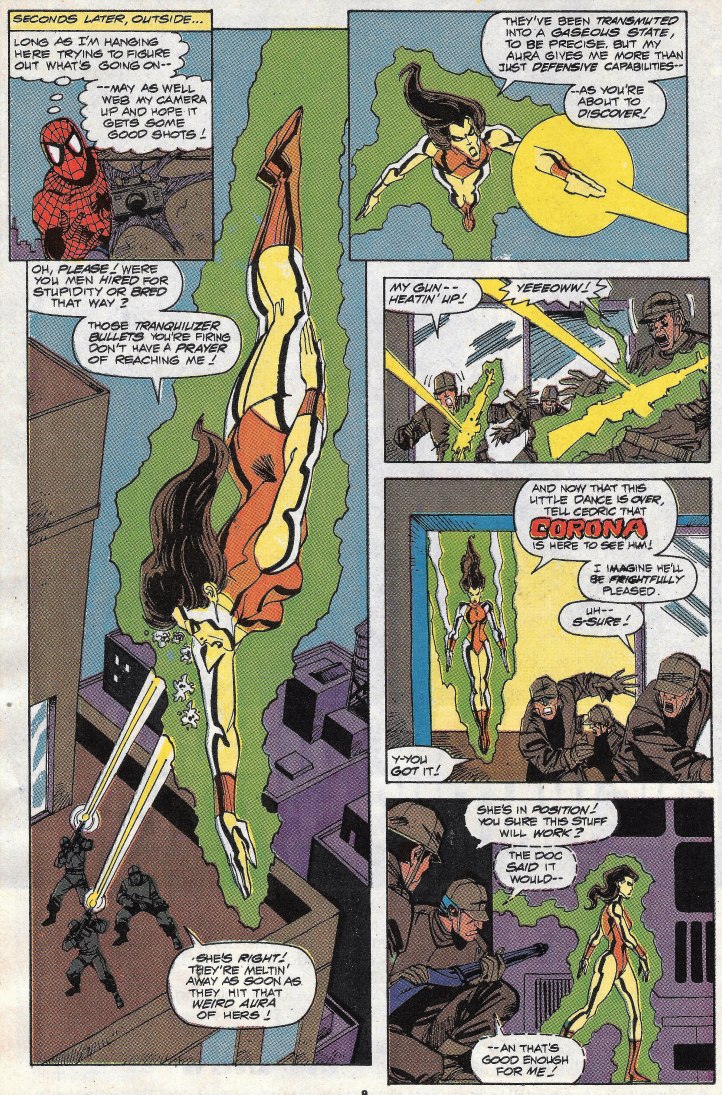 As Spider-Man, he finds the guards trying to knock out a glowing young lady who identifies herself as Corona. She looks like she could use a few beers too, as she could give Cedric a run for his money in being a prick to everyone around her. 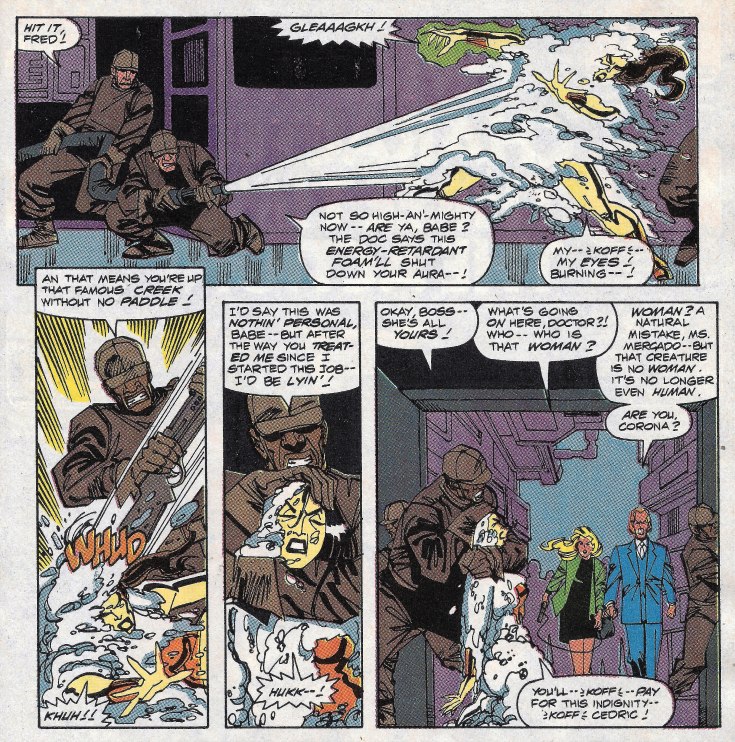 It being a super-science lab, the guards have prepared a little trap for her in the form of a hi-tech foam that neutralizes her aura, allowing a guard to “Whud” her upside the head. As Cedric makes an appearance, it would seem he and this Corona have a history. 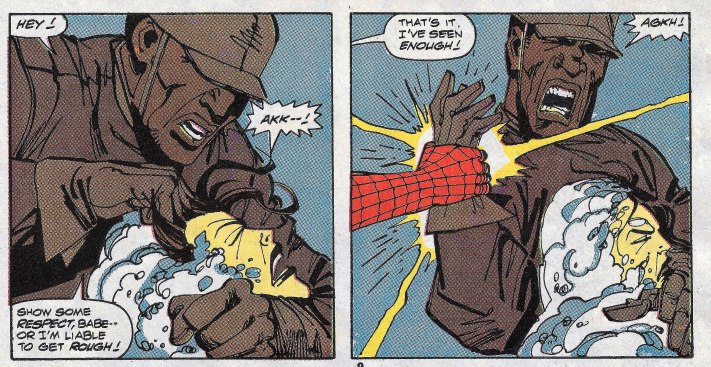 About this time, the guard holding her in a headlock starts a little judicious hair-pulling and Spider-Man has seen enough. 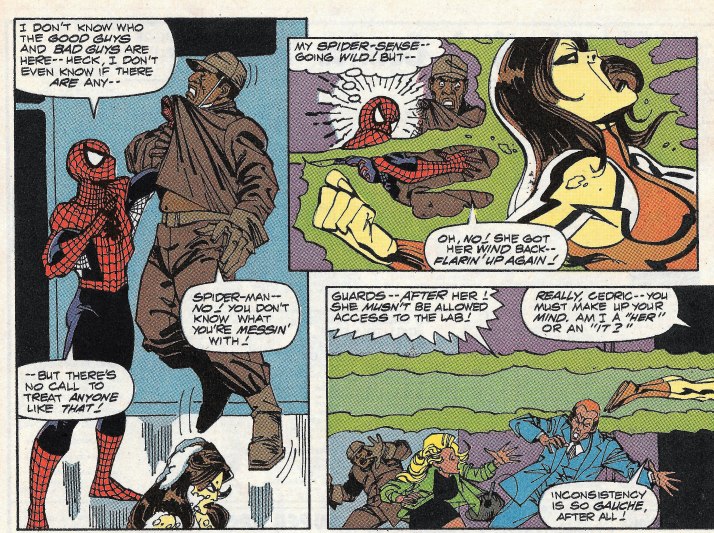 He steps in and attempts to broker peace between these combatants, but instead his actions allow her to get free of the foam with a clear head and purpose. 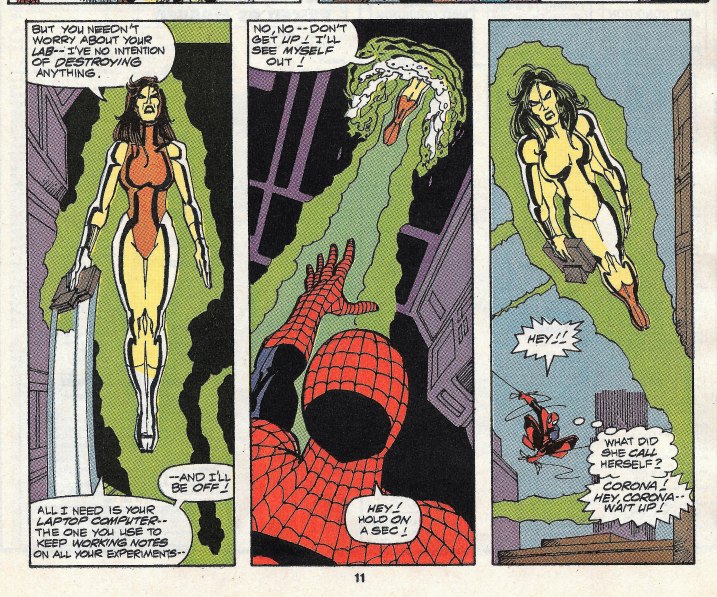 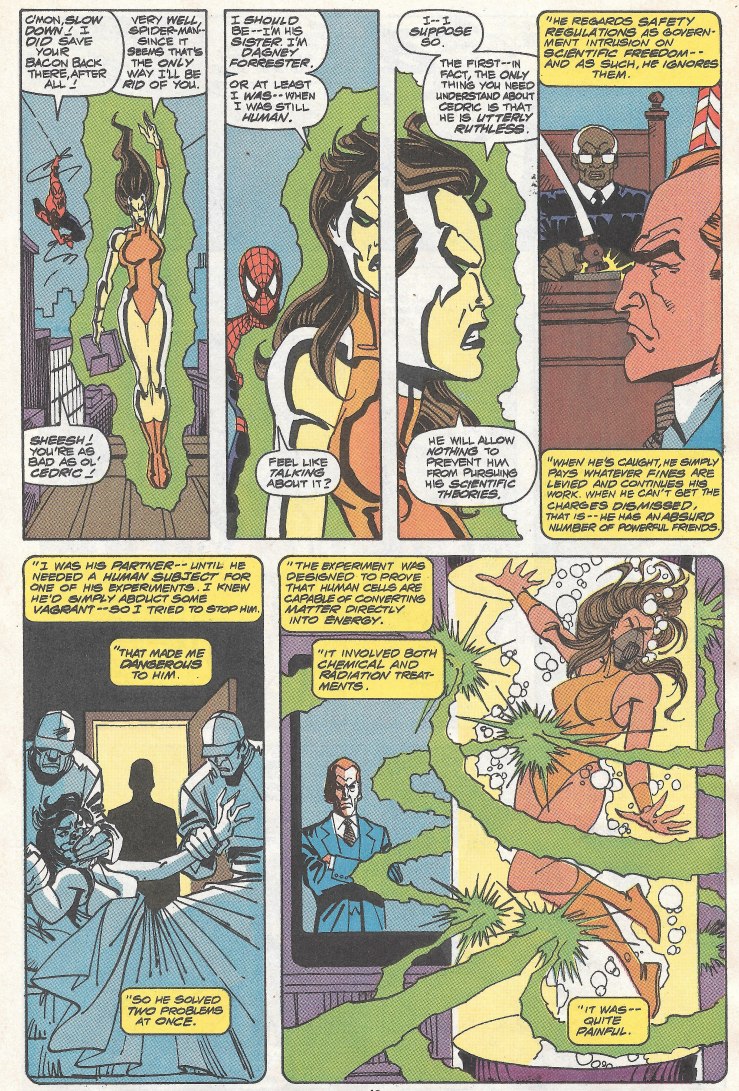 What he uncovers when she lands, is that this is Cedric’s sister, Dagney. Cedric is ruthless and irresponsible, running his lab in a very unsafe manner without any regard for proper safety protocols. Dagney states he performed an experiment upon her without her permission.

The result was she changed into Corona. Now all she wants to do, she claims, is to change back. Given what we’ve seen of Cedric thus fall, all of her accusations make complete sense. 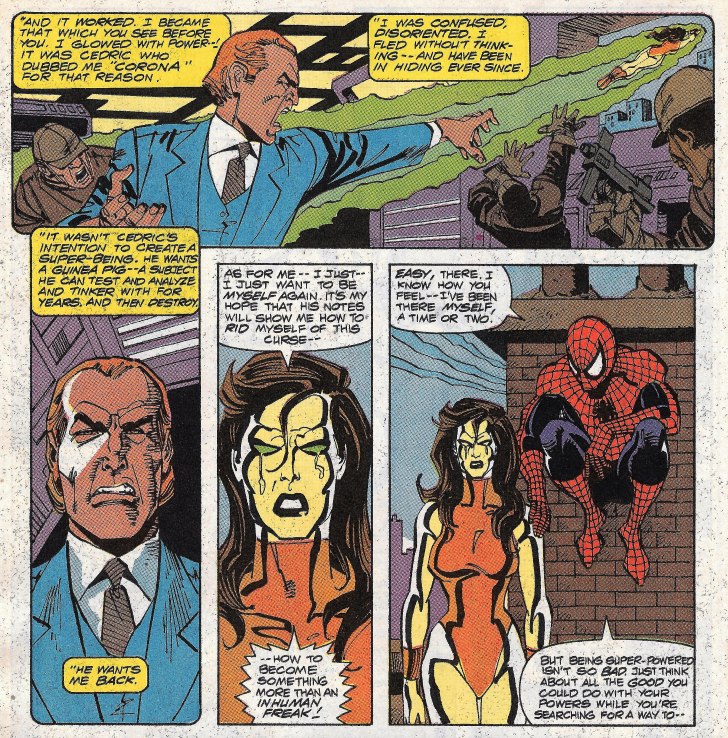 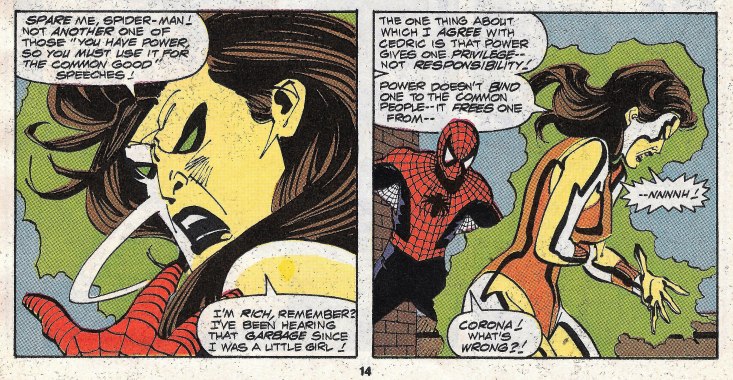 …Dagney cuts him off showing she has a very narrow and incorrect view of what power is. As she puts it, “power is a privilege, not a responsibility” and that having it means you don’t have follow societies rules any longer. It is strange to hear this viewpoint espoused in a Spider-Man book and I would have LOVED to hear where this back and forth took them, however about that time Dagney doubles over and her powers flare up.

Corona jets off before he can stop her, at a speed he cannot match, leaving the wall-crawler to wonder if she’ll find what she is looking for. 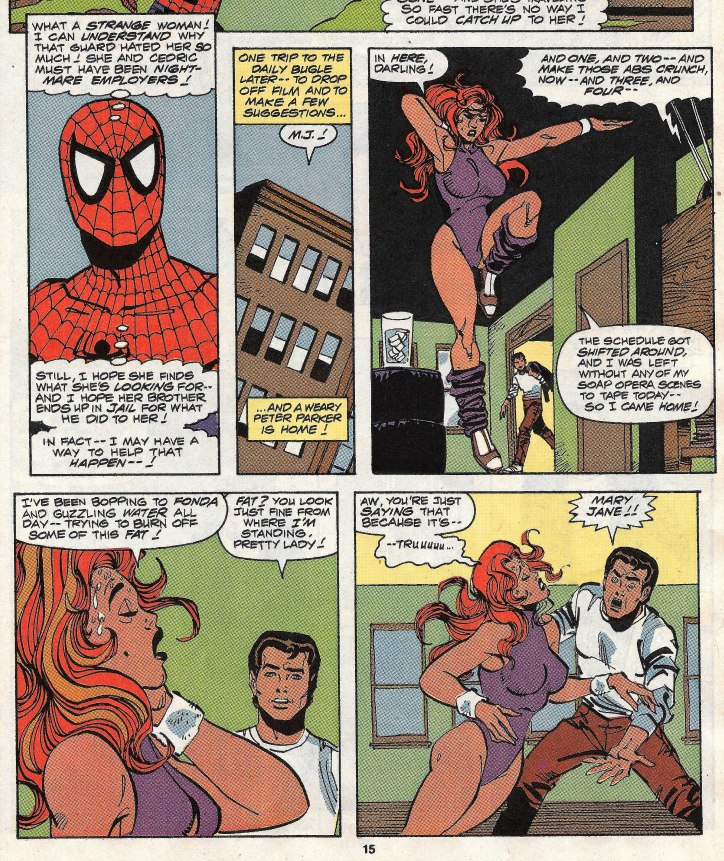 A horrible surprise awaits Peter at home however as Mary Jane succumbs to the mystery fever and must be hospitalized.

As Mary Jane fights off the sweats, Parker races around trying to find someone who knows what is causing the rash of illnesses known as the “Soho Fever.” His search leads him to the Daily Bugle newsroom for history on when the first case was and what it might be linked to. He calls to check in on Mary Jane, who is weak but able to speak. 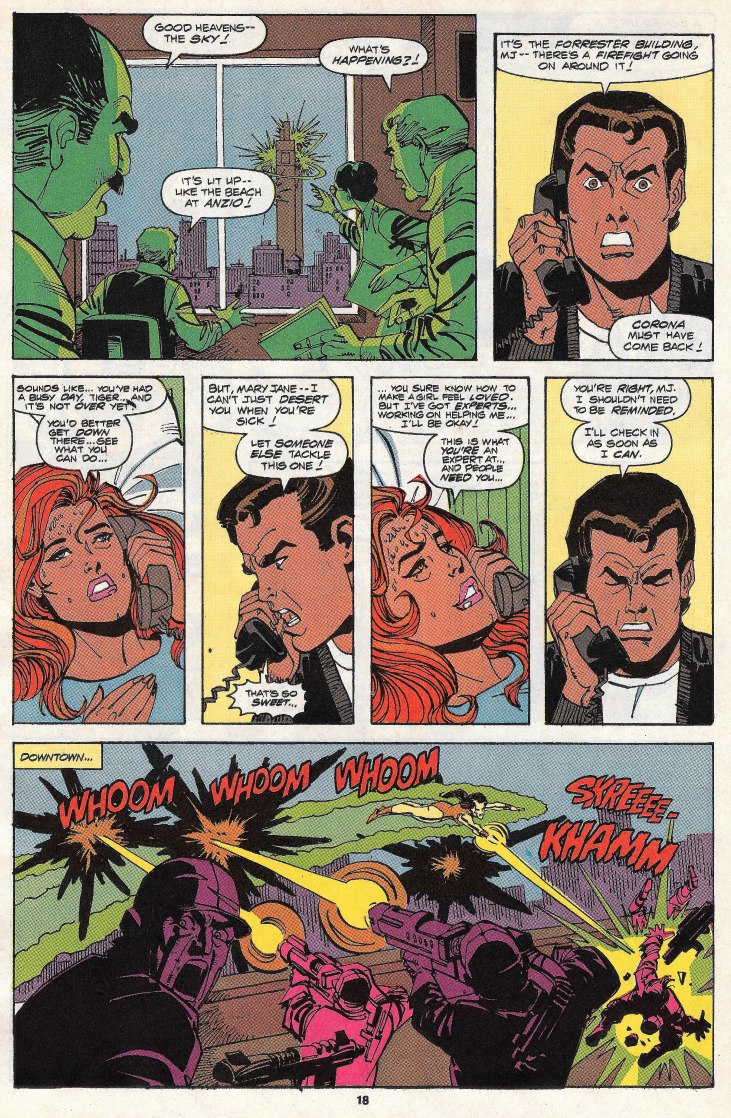 Just about that time though he notices Cedric’s building is under attack. Mary Jane encourages him to fight the one battle only he can do something about.
Peter arrives and Corona fills him in on what she found on Cedric’s computer. Apparently her brother's arrogance has filled the city’s water supply in runoff from his experiments. The effect of all these toxins being added to drinking water is… 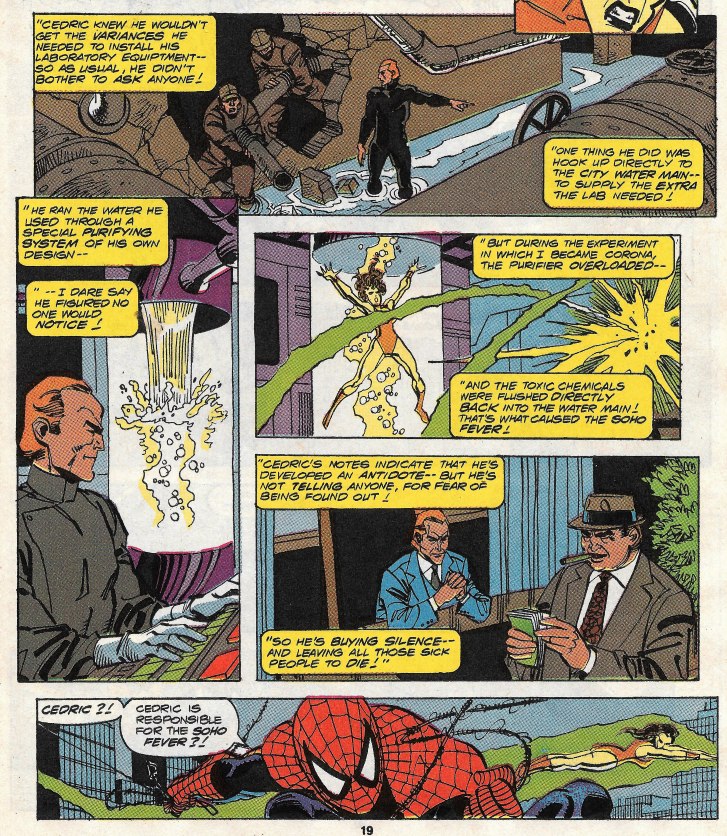 That’s right! Cedric’s willful disregard of safety procedures has created a health crisis for all of New York City. A much agitated Spider-Man confronts the irresponsible scientist. 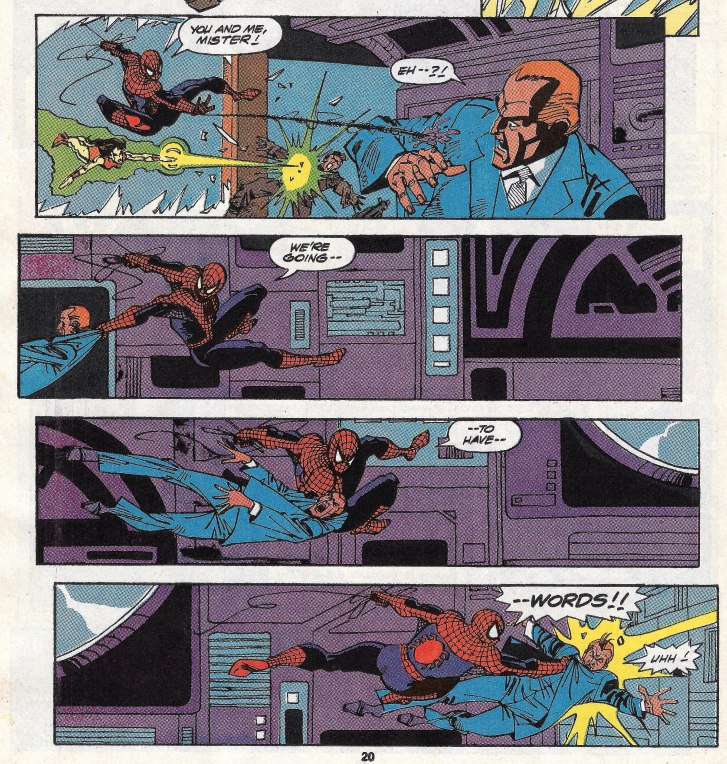 
Appears there will be a quick resolution, however as Cedric has prepared an antidote. Unfortunately there are more twists in this tale… 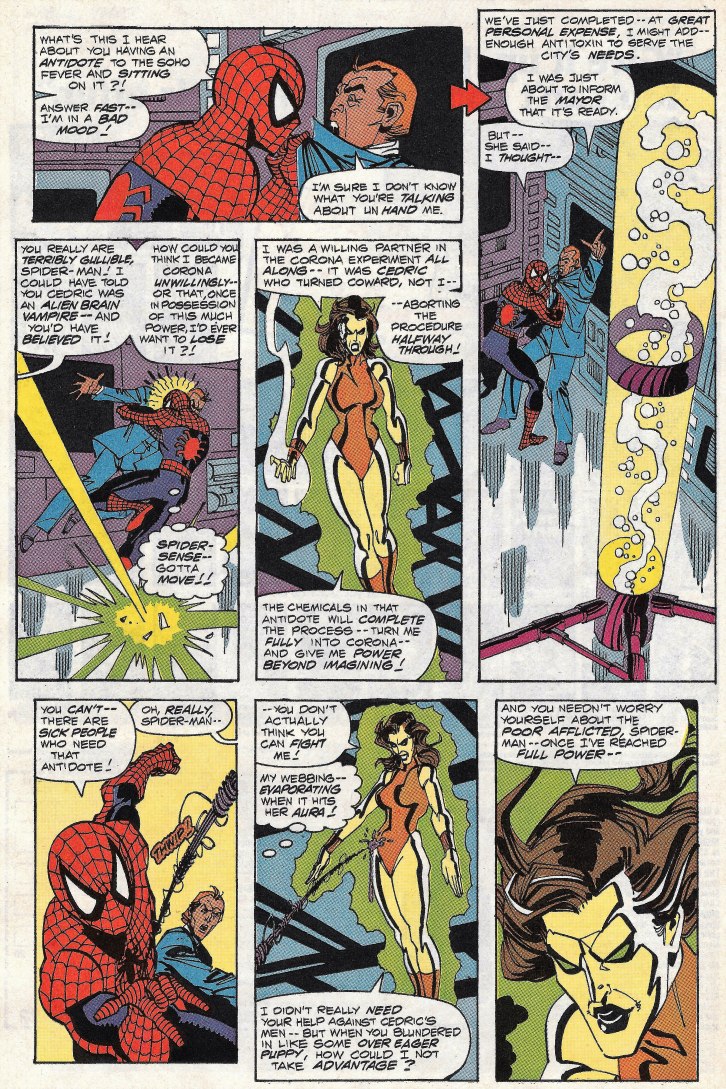 Appears that Corona is only out for herself, that whole bit about being abducted and experimented on involuntarily was a ruse to gain Peter’s sympathy. She wants to complete the procedure and gain as much power as possible. However, given her moral bent, I wouldn’t recommend it. Even with her stating she could cure everyone afflicted with Soho Fever with a single blast once she has absorbed the antidote and reached full power. 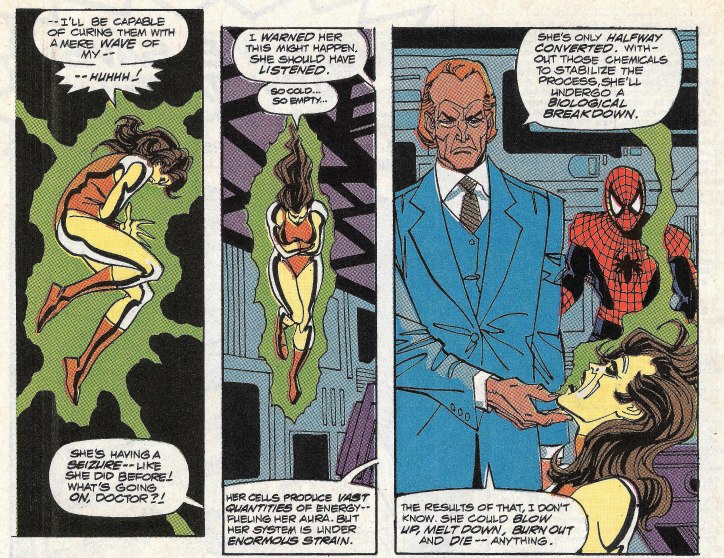 Not that we get to see that anyway as… 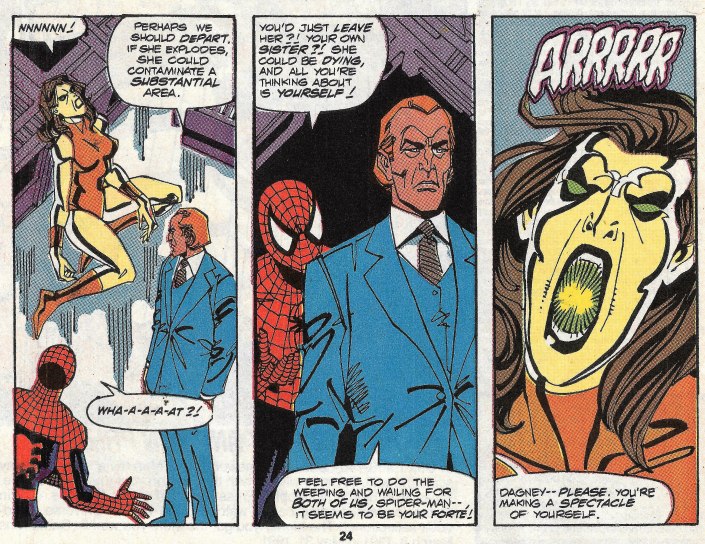 So it is a choice between Corona or helping countless sick people. How will Spidey ever make this choice? Cedric has an answer, of course. 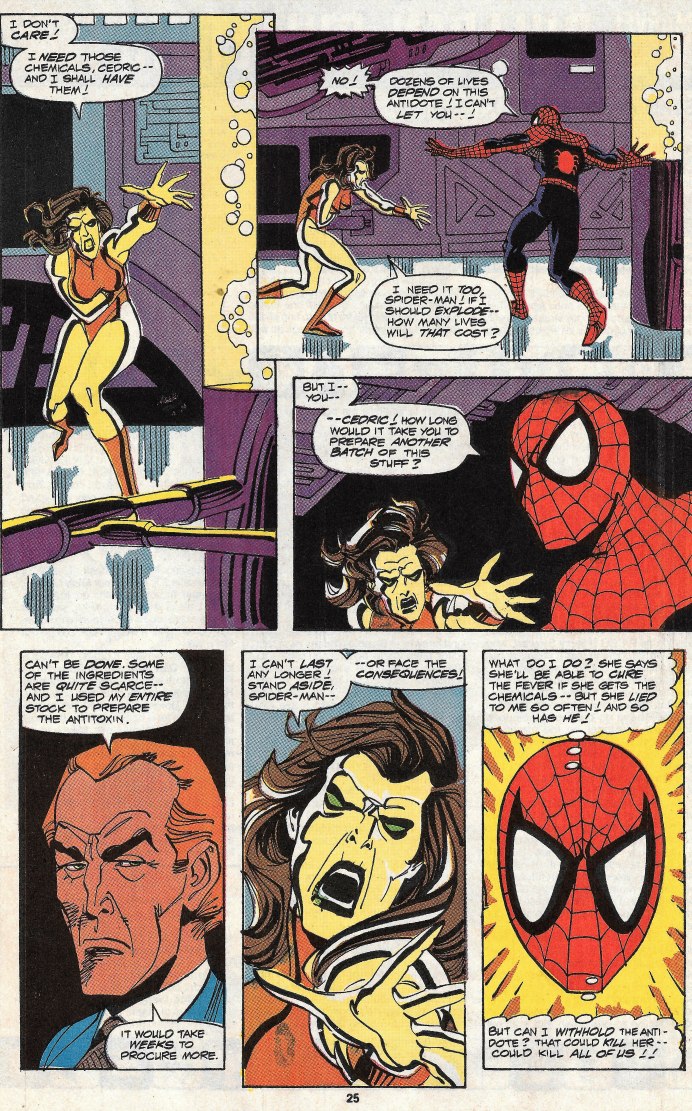 Wow! He’s off her Christmas card list for sure this year. And don’t you just love the bickering between these two? She’s dying and he’s telling her to do so quietly. Sheesh! 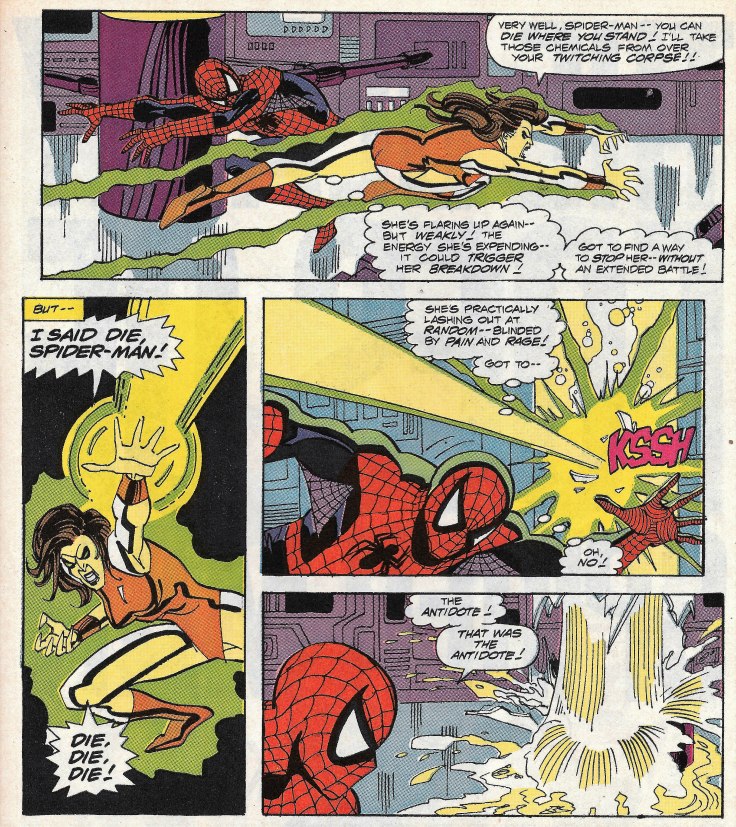 First off, Corona screws everyone by trying to take what she needs, destroying the container holding the antidote. It leaves her quite upset with herself.

As the remainder drips down the drain, her powers go overdrive and she mutates into the most hideous thing this side of Spidey-foe Carrion. And that’s where we exit this tale. 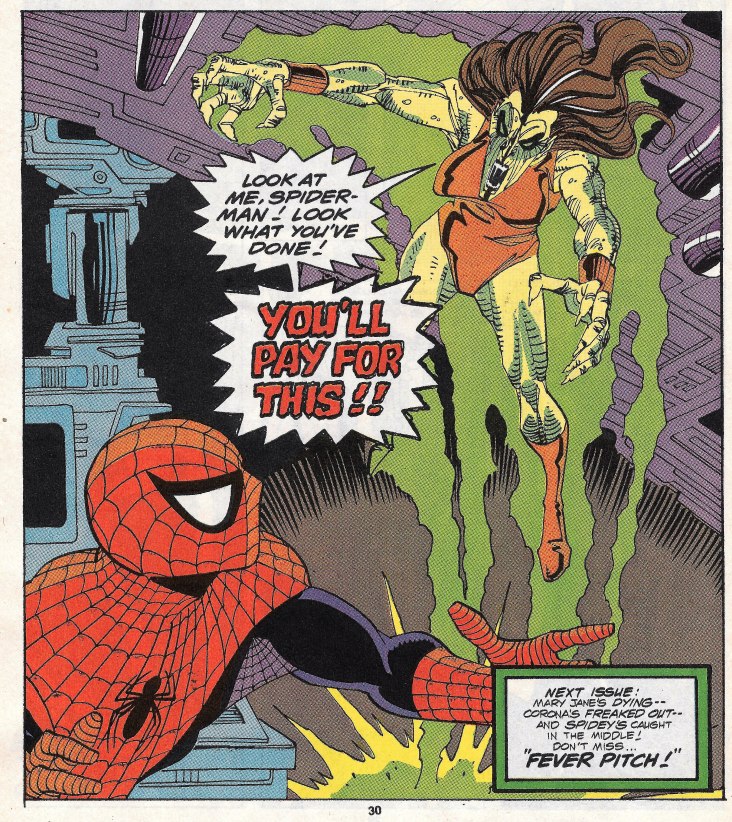 Kurt Busiek started a lot of good, thought-provoking conversations in this issue. I only wish he would have allowed the characters time to explore those concepts. I would love to hear the alternate side of the Great Power=Great Responsibility argument set out before Parker so he would have to justify his own reasons for the choices he continues to make daily. I count this as a great missed opportunity.


I am glad it was brought up that there are people who believe differently in Spider-Man’s universe. It makes for more interesting villains. Or even just interesting characters.


Posted by SonOfCthulhu at 4:19 AM