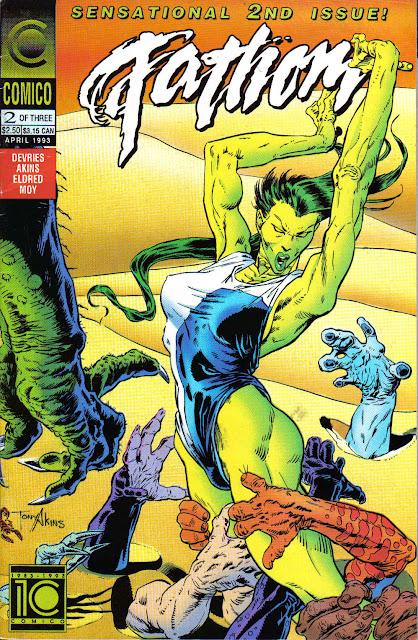 In the mid-80’s, Bill Willingham created a comic book for Comico called The Elementals. Acting as both writer and artist, Willingham took superhero concepts and freely mixed them with fantasy. He created a team book of four superheroes who each gained the powers of the four elements by dying. That's right: DYING! Morningstar was a female detective who gained the power of pyrotechnics, Monolith was a teenage boy with the power to turn into a giant Earth golem and Vortex was an army pilot with power to control winds.

Lastly we have Fathom, who in her former life was  a rich young woman who drowned only to come back with the power to turn her body into water and make like a fire hose. I admit that I only have a limited uneven run of the issues of the original The Elementals comic that Willingham created. My local comics shop sold out of the issues too quickly for me to pick up the book. It was wonderfully illustrated, with very clean lines and layouts. The story was graphic in terms of violence and had a decidedly anti-religious slant to it. I would love to run across the trades in the future.

Unfortunately, Willingham left the series sometime in the early 90’s. He retained creator rights to the characters for a time, but came to an agreement with Comico allowing the company purchase them. Comico the company wasn’t doing so well in the early 90’s, having been pushed off the shelf by the big two and under competition from the steadily gaining Dark Horse and recently emerged Image. The loss of a majority of its other titles forced Comico into bankruptcy, yet it still pumped out several mini’s and one shots of Willingham’s characters before closing its doors in 1997. Many of these books had only a dabbling of Willingham if any at all. The second miniseries of Fathom had none. Sadly the art and story quality fall way short of what you expect in an Elementals book.

That cover brings me pain. I’m not sure if it’s Fathom’s facial expression, her left arm which seems to have two elbows, that each thigh is as big around as her torso or the fact that she appears to have both enormous boobs and a slight “package” where her crotch is. Art duties inside are by Tim Elred, and while they are better than the cover, they ain’t much better.

Not to be outdone in the sucking department, David DeVries writes a Fathom story so convoluted by flashbacks and flashforwards you’d swear he was Guy Pearce’s character from Memento. Not to worry. Just read the inside of the front cover and you’ll make it through the book just fine. Because in a very novel approach to comic writing, the “The Story So Far…” box tells you what happened last issue as well as what’s happening in this issue. 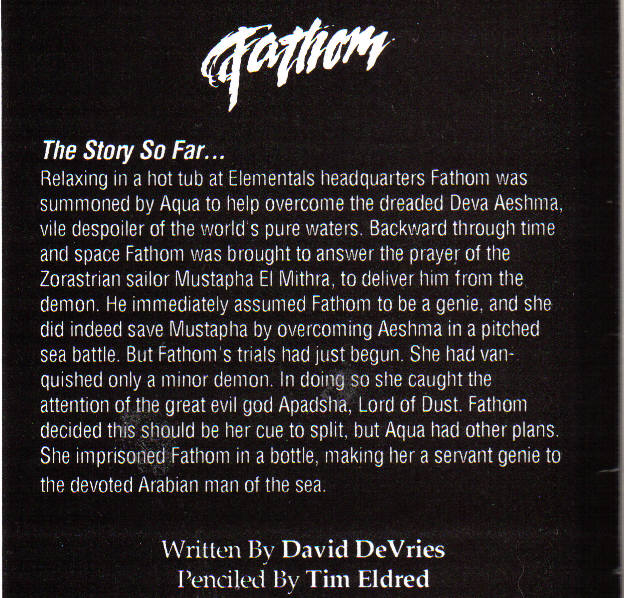 I’ve never read a book that gave away its whole plot in one paragraph before. Maybe David was just trying to spare me from Tim’s mediocre art? We get about 1 page of actual story this issue outside of what you learn here. I know that most middle books in a trilogy are filler, but this is pretty ridiculous. On to the whirlwind story we go, though. Mainly because I want to see if you get lost in the maze of backwards and forwards narrative progression. 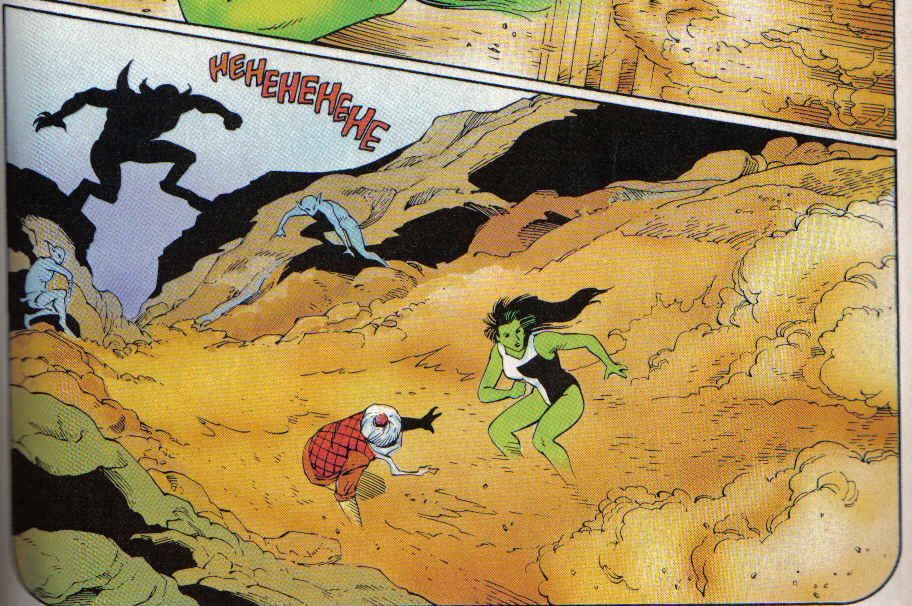 We start with Fathom in the desert of ancient Turkan, AD 992, with Mustapha, an Arabian dude who had Fathom’s “genie” bottle. The bottle made her Mustapha’s servant for the time being. Mustapha has just been attacked by Bushyashta, a dust demon and two horrid creatures. Bushyashta grabs Fathom’s bottle and orders her back in. Fathom resists and attacks him while Mustapha is ganged-up on by the two followers. 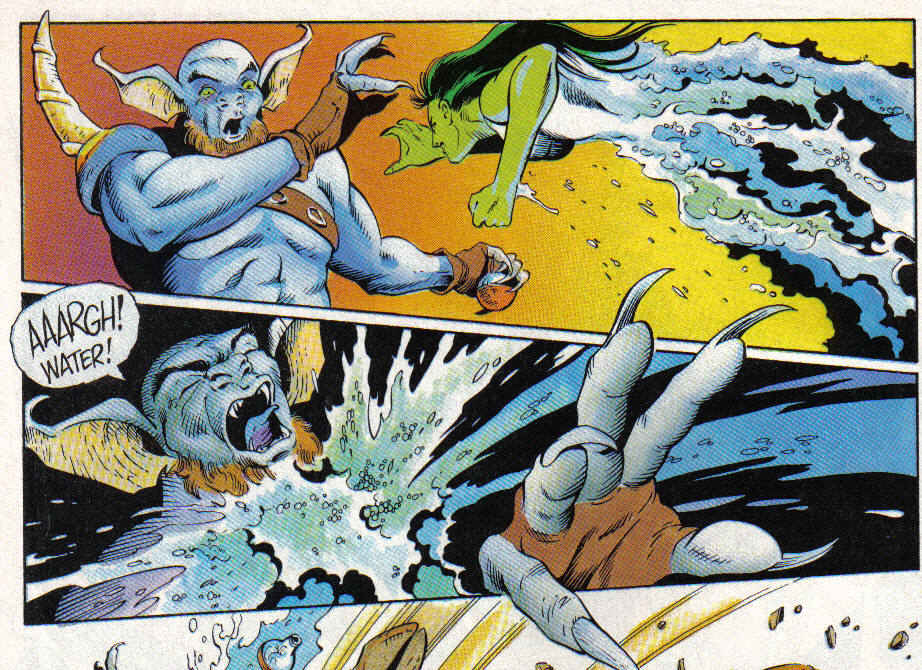 He’s melting! MELTING! Okay, so he's going to be a bit more trouble than the witch from the Wizard of Oz but really, he's a DUST demon. Shouldn't he turn to mud or something? Mustapha does really well fighting the two goblins, even getting one to kill the other. But he appears winded, leading Bushyashta to use him as leverage to get Fathom to surrender.

Pay very close attention to this panel. It occurs at the end of a flashback later with no warning that you’ve re-entered the present-day in the storyline. Yay for poor plotting. The next page we are treated to what happened to Fathom right after she was trapped by the elemental goddess Aqua in the bottle and it was given to Mustapha. So this is Fathom’s flashback. You need to pay careful attention from this part on. After a brief chat with Mustapha, he begins to recount his own story to Fathom. A story that will be shown to us IN A FLASHBACK! That’s right we are now having a flashback inside another flashback. If you get lost here you’ll never get out. 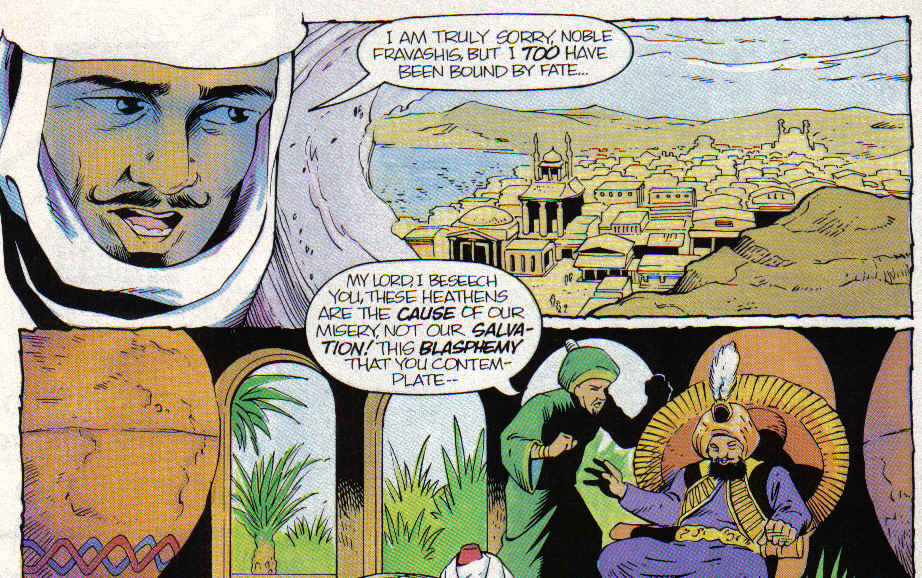 Mustapha tells his brief background, how he was tasked by the Sultan to make the waters of the Caspian sea return. He took a ship out onto the sea to find the deva Apaosha, Lord of Drought. Apaosha sends out a demon to sink it, only to be met by Fathom who has just been transported back to this time period by the goddess Aqua. This is basically a recap of last issue. Seems not much happened then either. Mustapha’s flashback ends.

Now we should be in Fathom’s flashback, but for some reason we get a full page of Lord Apaosha directing Bushyashta to attack Mustapha and acquire Fathom’s bottle. Since Bushyashta already attacked them in the present, this must be happening in the past, at the same time as Fathom’s flashback. But she didn’t know about their little private conversation, so why is it included here? Next we have Fathom getting ticked off at Aqua while trapped in the bottle (still in her flashback.) Aqua then does something that is totally unexpected: she recounts Fathom’s origin in a FLASHBACK. 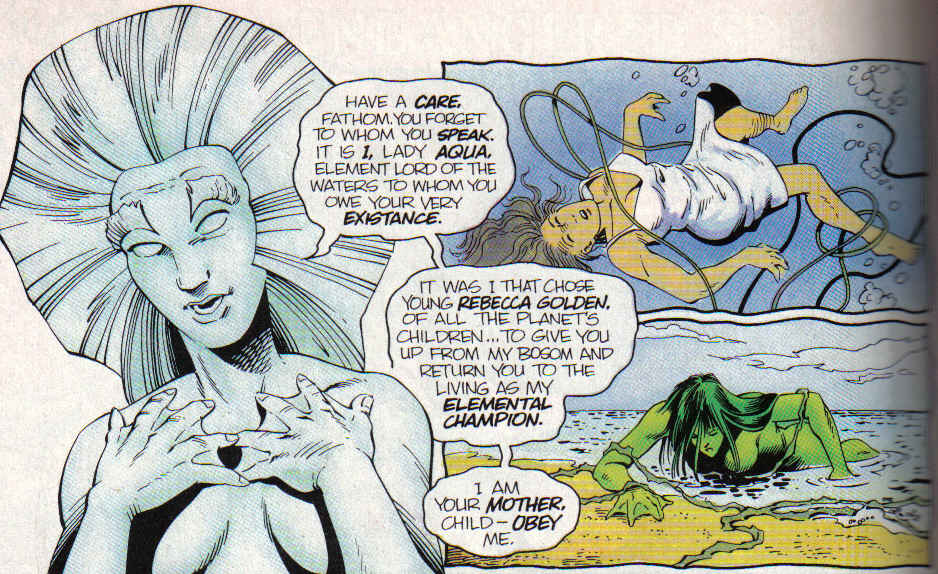 Meanwhile (really meanwhile? I’m not sure anymore.) Mustapha happens upon a temple in the desert. While he kneels to pray by the sacred fire pit, the priest who escorts him in makes a play for Fathom’s bottle. She escapes from it, but the priest, temple and fire pit end up being an illusion and we are back to the beginning of the book again. 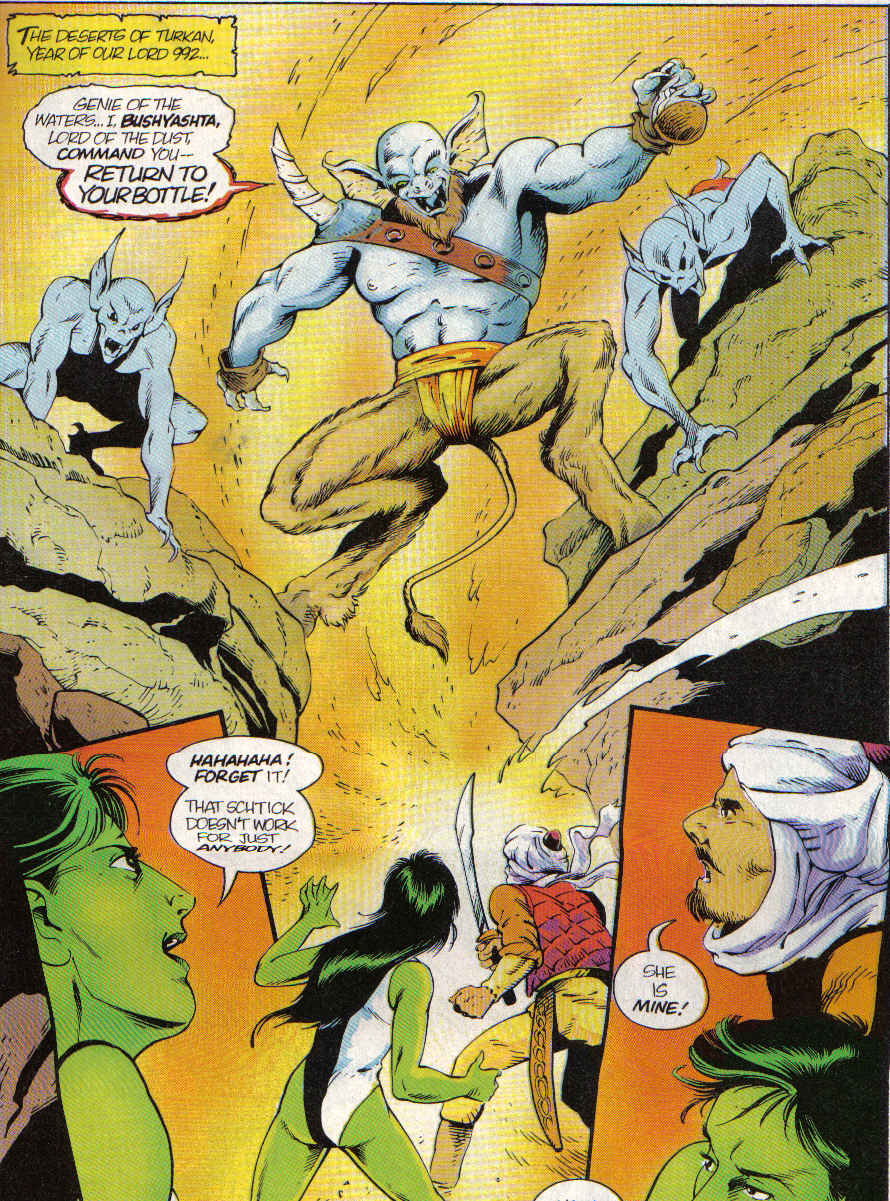 Seeing as how we’ve already watched this battle in the first seven pages of the issue, our writer now has no place for us to go. This is a major problem with his idea of telling the story using all these flashbacks. He has now broken up the narrative flow of his story so badly that he has no choice but to skip over to the end of the battle. And so he does, losing any buildup and confusing the gentle reader with his ham-fistedness.

Yeah, we’ve heard that before somewhere. To end this silly mess, he has Fathom attack the demon by turning into water and splashing him. He endures the soaking and then proceeds to drink her up then spit her back into her own bottle. 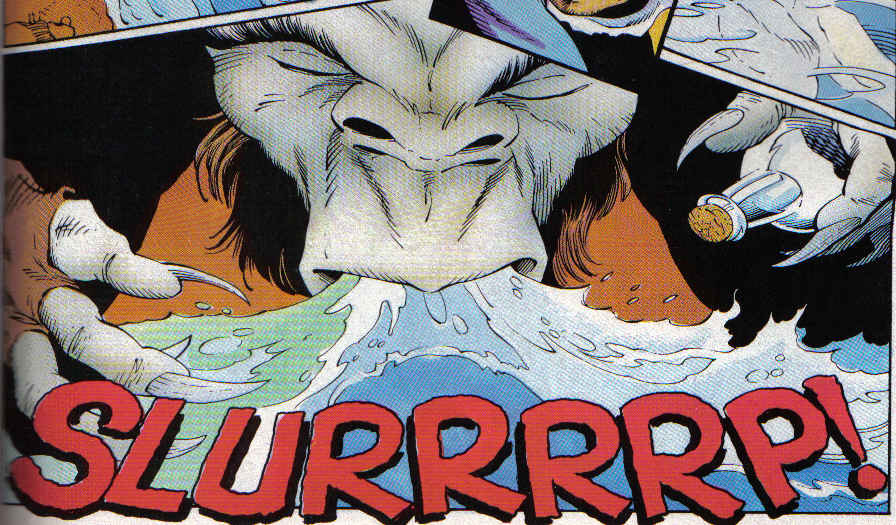 * insert your own joke using the word “suck” here *

Mission accomplished, he takes bottle and Fathom back to his master, leaving Mustapha lost and alone in the desert. Many a reader knows how Mustapha feels at this point.
Posted by SonOfCthulhu at 4:19 AM