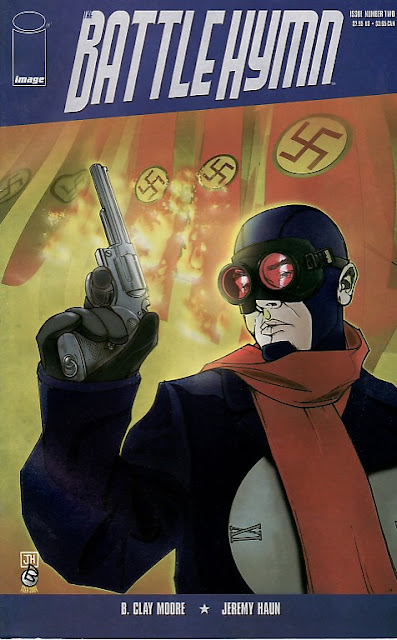 There is a good reason why Marvel didn’t do “Ultimate Invaders”: The reason is it wouldn’t hold a candle to Battle Hymn

It’s kinda rare to come across something in the crapbox that truly doesn’t belong there. Battle Hymn is one of those rare finds. Written by B. Clay Moore and Penciled by Jeremy Haun, this comic is a gritty realistic take on an Invaders-like superhero team going up against the Axis powers in WW II. It contains some scenes that remind me of Millar’s best work in “The Ultimates”. Even the art has a bit of “Hitch-ness” to it. We’ll get to all that goodness in just a bit.

Published four years after Marvel started the Ultimate line, it’s very hard to believe that Battle Hymn didn’t cause any legal controversy. Even if the characters have different names and uniforms, it’s hard not to spot that they were modeled archetypes from Marvel’s WW II comic The Invaders. We have The Proud American (Captain America), The Artificial Man (Human Torch), Quinn Rey – a malcontent king of the merpeople (Namor/Submariner), Johnny Zip (Whizzer), Mid-Nite Hour (Union Jack), and reporter Betty Jones (Miss America). The story has straight-forward bad guys (Nazis) so the drama is the inter-team dynamic. This is virgin territory from what Marvel did with its superteam, so perhaps that’s the reason there’s no law suit. That, plus the fact that the over arching plot is, according to Moore, “The number one problem with all retellings of World War II super-hero stories is trying to explain why the heroes didn't just blow into Germany and take out Hitler and his goons. Writers invariably come up with convoluted answers to that question, but in my story it's only a matter of time before one of the 'heroes' realizes there's no reason he shouldn't do just that. And that's when the shit really hits the fan."

Well issue two doesn’t hold that revelation, but it has got plenty of character driven action and conflict. We start with a press conference where our cast is being introduced to newspaper men. The photo op means that each hero gets a one paragraph introduction to remind the audience who these guys are. Then we run smack-dab into the realization that our Captain America stand in, The Proud American, is something of a dick. 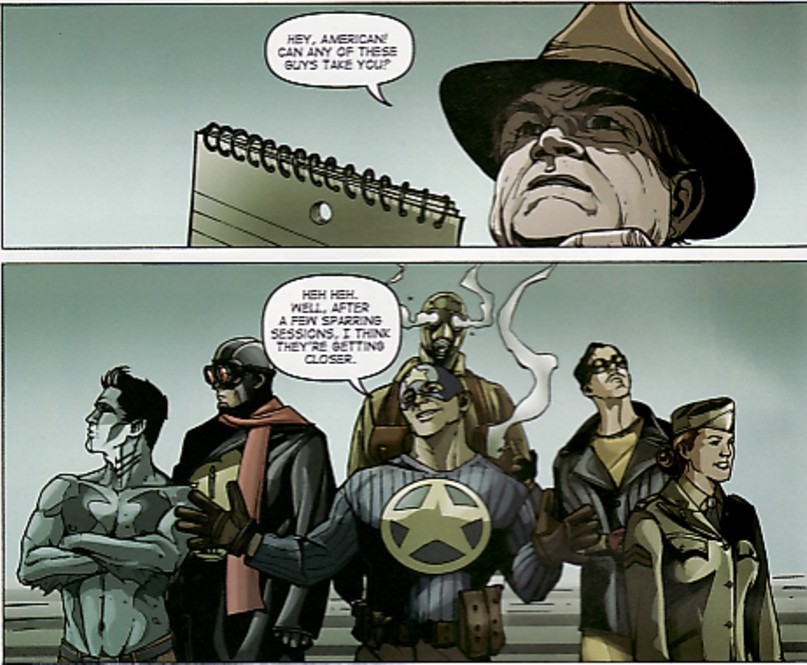 As the press conference wraps up, Betty Jones lets the reporters shoot a risqué (for the 1930’s) photo of her legs. This starts an argument between her and Proud American when the group gets behind closed doors. 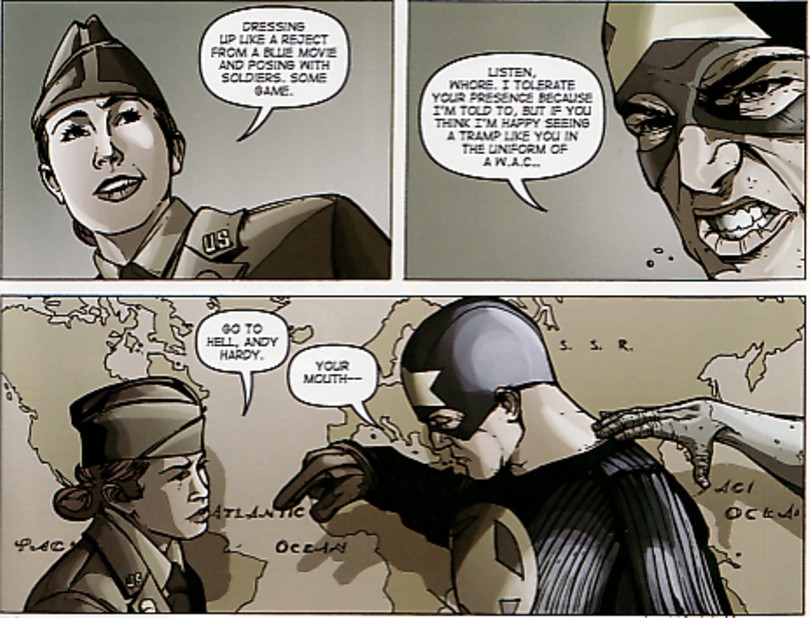 Proud American is as far from Steve Rogers as he can get. But never fear, Betty’s on this team because of her relationship with Namor-boy, Quinn Rey. And Quinn is just a bit protective of her. 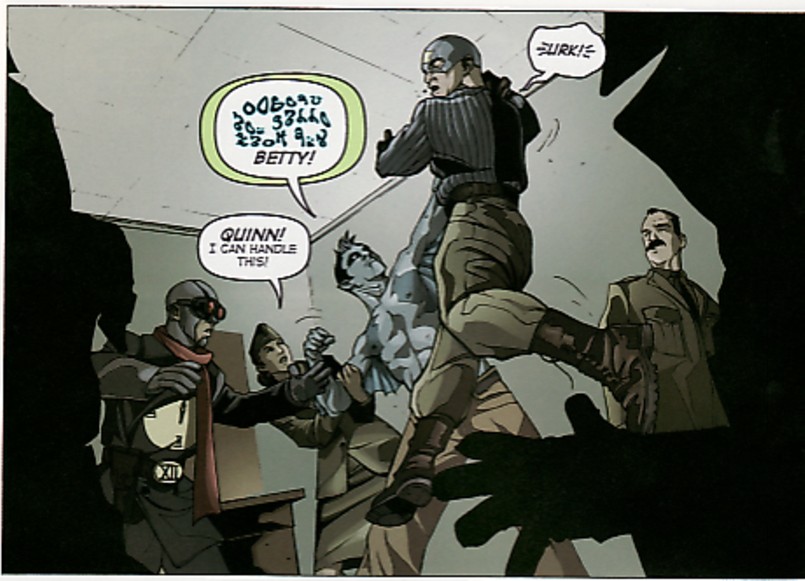 In all my years of reading comics, I’ve never grown to like the group dynamic of any super team as fast as I did in Battle Hymn. Proud American is a poster boy for the war effort, not a front line solider. He’s self-righteous, arrogant, pompous and a bit too moralistic. Betty knows what she has to do to get where she wants, regardless of how improper it makes her appear. She’s strong and self reliant. Quinn is utterly alien and but more human than the robotic Artificial Man who has all the warmth of a toaster oven. Zip is smart lipped yet sly like a fox. He’s only in this for the money and whatever fame might bring him. Our coverboy Mid-Nite Hour is a straight up hero. He brushes off the rest of the groups jibes at his nationality (British) while receiving no monetary compensation for doing what he feels is his duty. It’s Mid-Nite’s head we seem to occupy most of the time or at least he’s the most accessible of the six.

Seems Proud American is needed for photo shoots and troop morale building else where, so the American government brings in a replacement: Defender of Liberty. He’s a bit of a butthole too, but gives the impression that he’ll handle himself better in a real fight. Comes across as a very spunky Bucky. That’s not to say everyone takes to him. 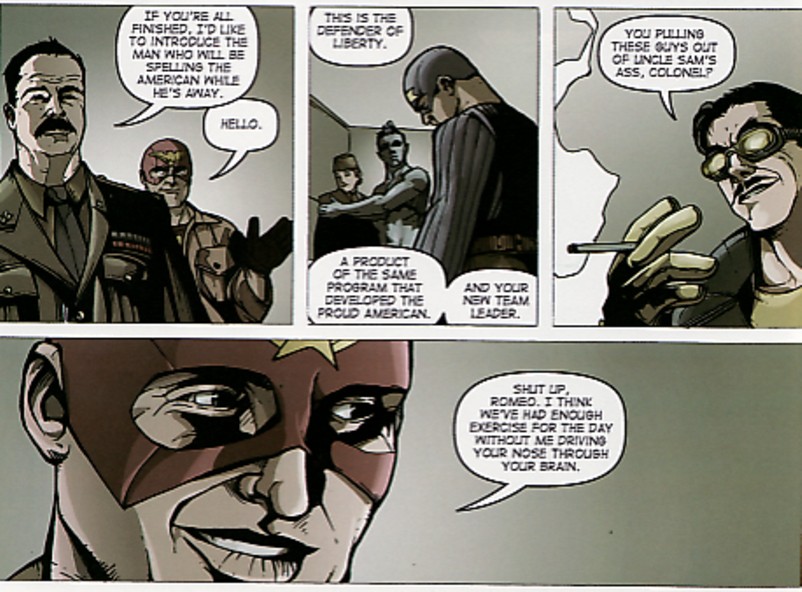 Moving along, orders get handed down and the team (or at least a majority of them) is assigned a mission. Something so easy that they are calling it a “cake walk” assignment. Betty is pulled out and the rest are sent via air drop to snatch a log book from a Nazi terrorist training camp. The plan is that Zip will race in and grab the book while everyone but Mid-Nite charges the camp. He’s left behind to take out any strays. In the cargo plane, they start discussing their misgivings about the non-verbal Artificial Man. 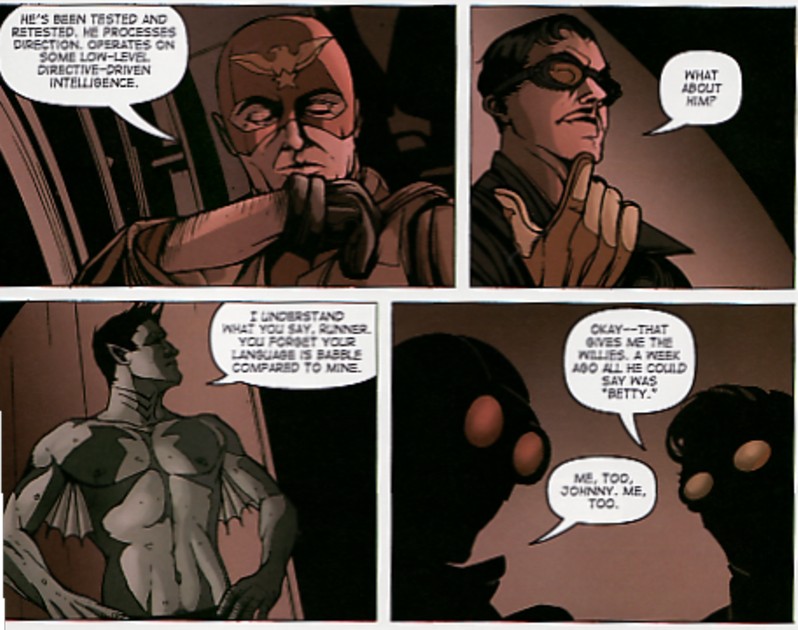 That’s a very tight scene there and conveys just how well and how badly this team meshes together. Quinn conveys just the right mix of Namor/Black Adam badness without crossing the line into self parody. The drop goes well, although we get a creepy kind of foreshadowing when Artificial Man drops out of the sky wreathed in a trail of smoke and gas. It’s clear he makes everyone uncomfortable. Defender lines out everyone’s roles and Zip, AM and Quinn start their assault on the camp. It’s about this time that the Nazi’s get a little shook up by AM. 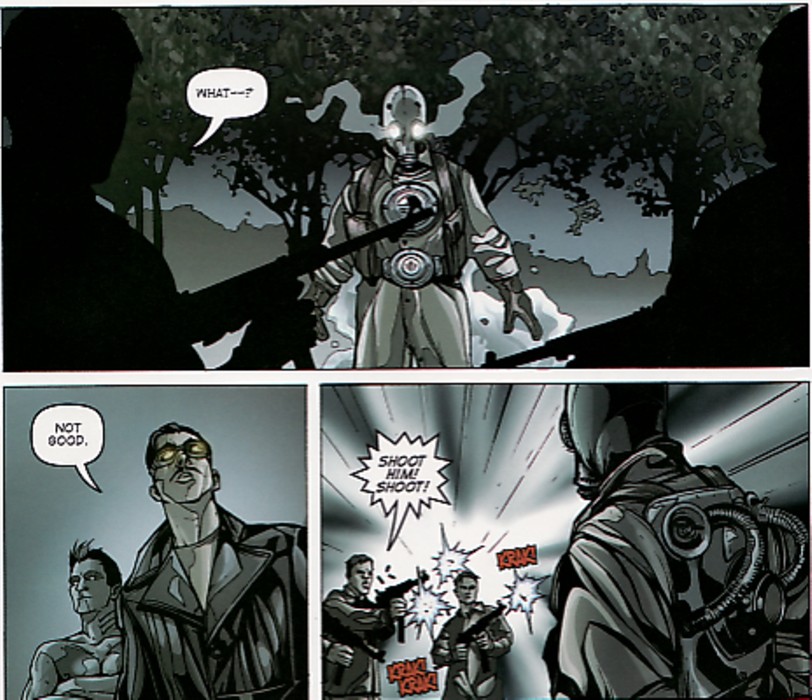 As a stray shot clips AM’s arm you can see that things are going to get ugly quickly. 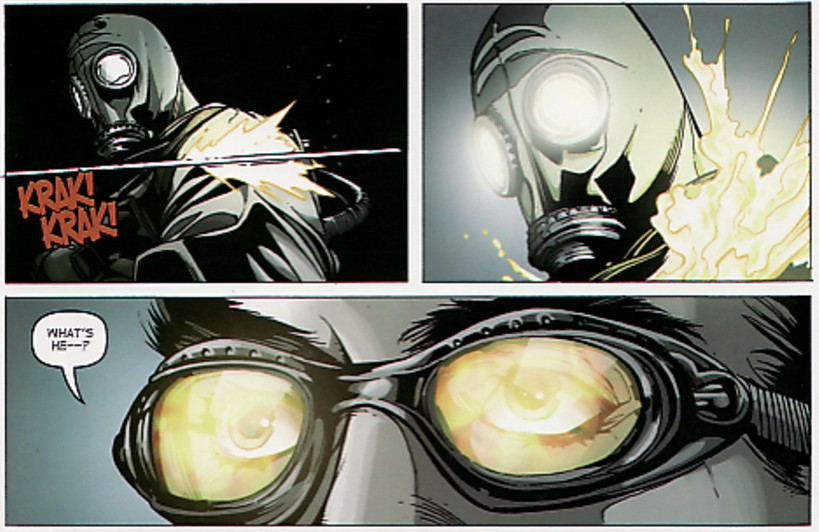 AM’s eyes show a very human degree of burning hatred and the shine on his goggles precludes an all too human reaction. The flow of these panels is flawless and is as good as anything Marvel’s put out in the Ultimate universe. 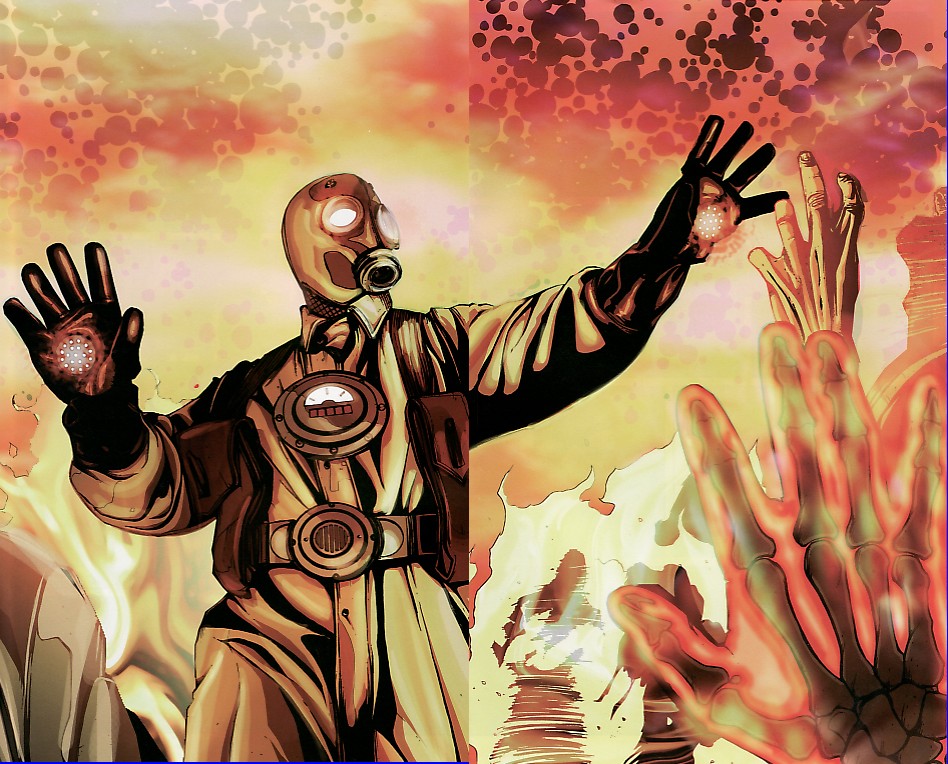 The end result of this is shown in a stunning two-page panel that floored me. I don’t think scans quite do it justice. 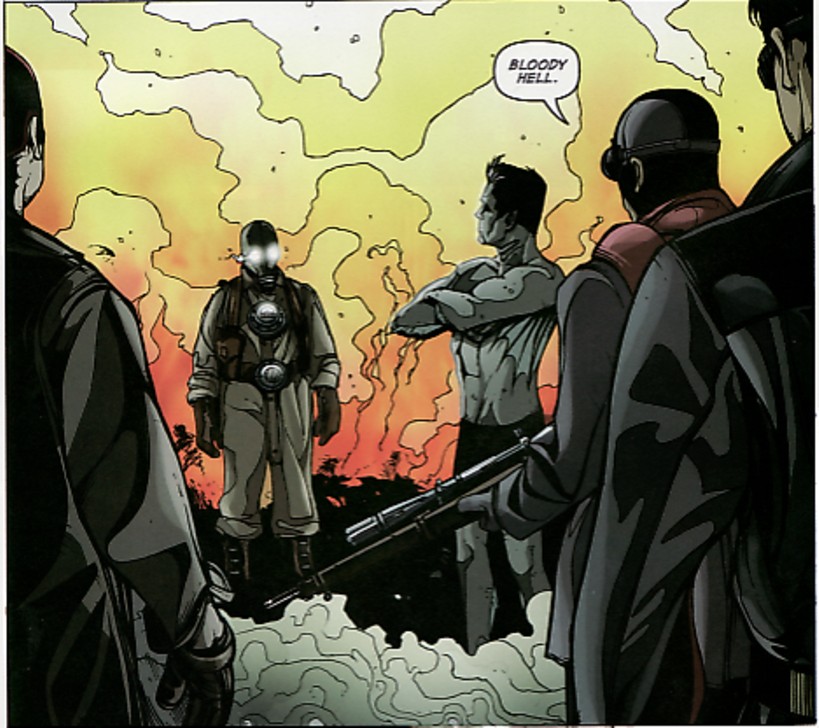 The team freaks. Zip goes back for help, bringing Mid-Nite and Defender to the scene just after the Nazis are all flash-fried. Love Quinn’s pose here.

So the team heads back stateside. Mid-Nite and Zip share a drink in a bar, Zip confiding in Mid-Nite that his selflessness in not taking compensation worries him. We end on Zip leaving with Betty after sharing a rather passionate kiss. Who’s going after Hitler? What will the team do in response? I don’t know, but there’s a TPB out there now that I’m going to have to buy.
Posted by SonOfCthulhu at 10:43 PM