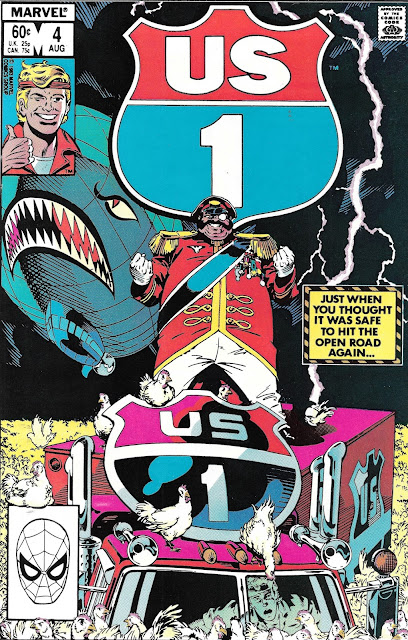 I'll never complain about action figure tie-ins again, given that US1 is a tie-in for a racing set

TYCO came to Marvel's offices one day with a new product they wanted help selling. TYCO was one of the most recognizable names at that time in the low-end model train business. But what they had wasn't a box of train cars.

What they had were TRUCKS.


They had EiC Jim Shooter's ear and it wasn't long before he pulled in writer/inker Al Milgrom to brainstorm some ideas. They both saw the book as a challenge. What emerged from those meetings was an ongoing series that wrapped up in 12 issues.

The series involved a truck-driving "superhero" looking for his missing brother and bedeviled by a mysterious figure shown only in shadow. His name was Ulysses Solomon Archer (or US for short) and he was joined with a quirky cast of side characters.

BlogInto Mystery has done us the honor of reviewing the first issue over HERE, so if you want direct background on how this all came about with a really decent review, I'd head there first.

Meanwhilewe can take a closer look at those TYCO toy sets through the magic of youtube. Seems those on and off loading of items wasn't exactly smooth, but doesn't appear prone to failure. It is funny how the barrels kind of fly out with a loud noise when being unloaded. BANG! BANG! Sure hope that stuff isn't volatile.

But on to the book, and this issue is a doozy. If this issue is any indication of what these stories were all like, then they were structured much like an episode of Speed Racer and having the same kind of goofy sidekicks. In fact, the Speed Racer comparison works on other levels too, as US's truck is tricked out just like the Mach 5 and Speed also had a missing brother. If US's major antagonist "The Highwayman" turns out to be his brother that creates even more parallels. 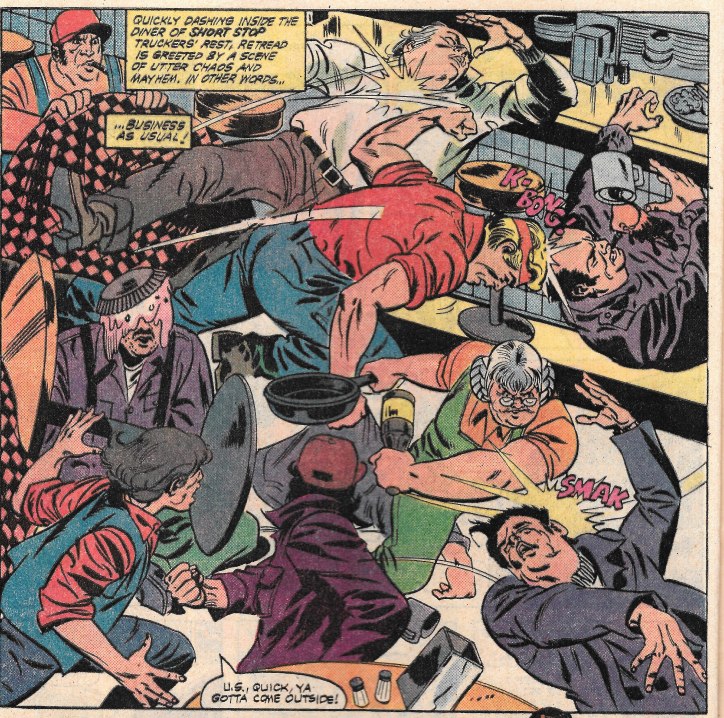 But we begin or issue with one of US's gang with the cutesy nickname of "Retread" rushing in to a barroom brawl going on in a diner. He's there to warn US of a mysterious goings on outside. 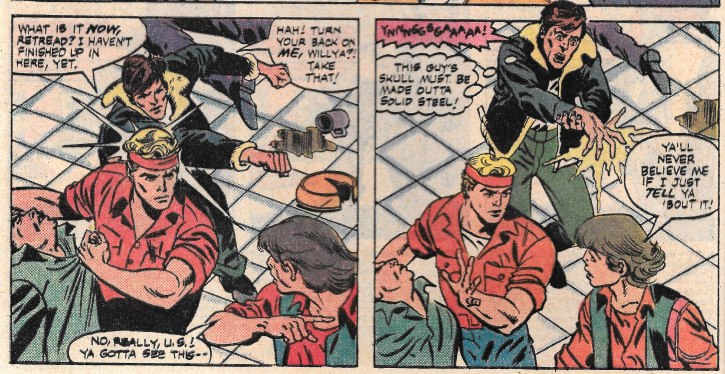 Note the guy striking US from behind. There is a reason he breaks his hand. US's skull had been replaced with steel and CB equipment. Yeah, I can't make that one up. Any blows to the cranium by bare knuckles are sure to result in causalities to the puncher. 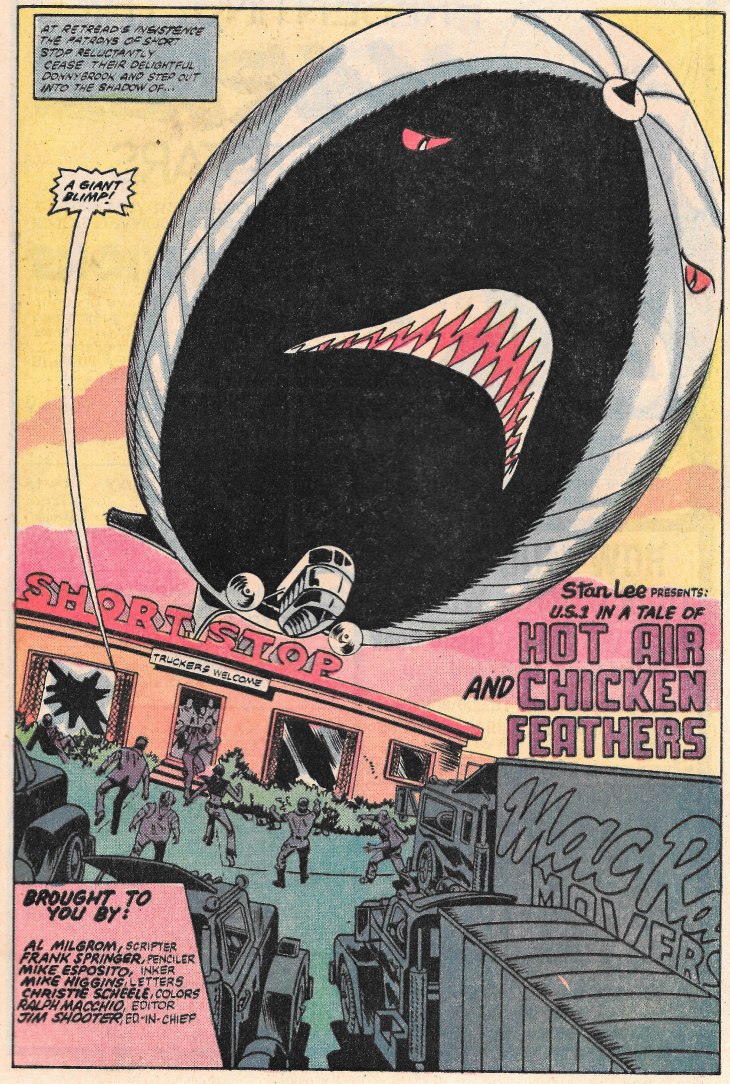 As for what is taking place outside? It appears an evil version of the Goodyear blimp has appeared in the skies over US1's favorite hangout.

The driver is Baron Von Blimp, a man who speaks in a fake 1950's "Chur-man" accent filled with so much Horgan's Heroes' Corporal Shultz that the book ITSELF makes a joke about it. The entire story is told with a high degree of camp and the accent here is our first indication of the "road" we about to travel down. 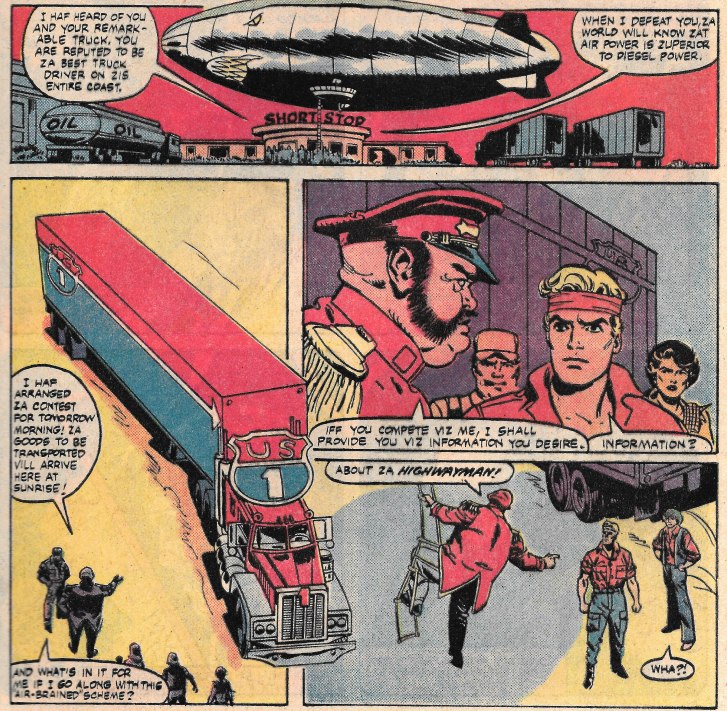 Argh! That accent HAS to go. Ugly and lazy stereotypes like this reduce the major villain to a cardboard standup. I suppose, given the tone they are setting that this is acceptable, but it is insulting to hear in the same way Pidgeon English rubs me the wrong way. 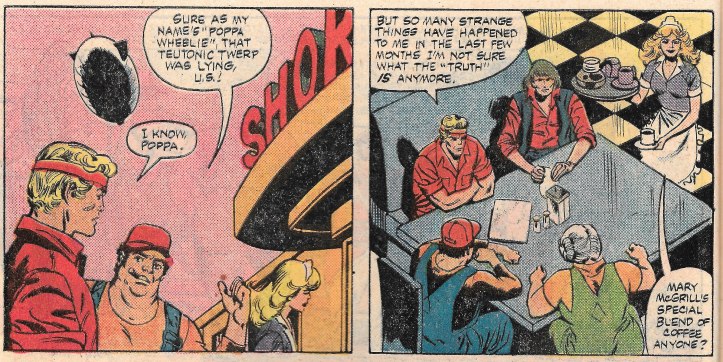 Another thing that ruffles my feathers are characters with annoying spot-on nicknames derived from their actual name.

And speaking of feathers, there are a lot of them coming up right after US recounts his superhero origin… 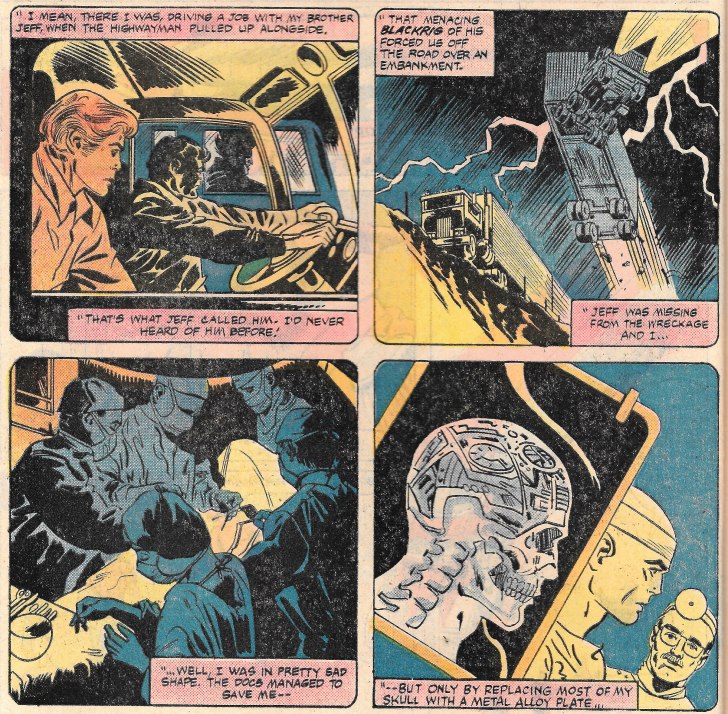 …and brings us up to speed as to the last three issues and the challenges he's faces. 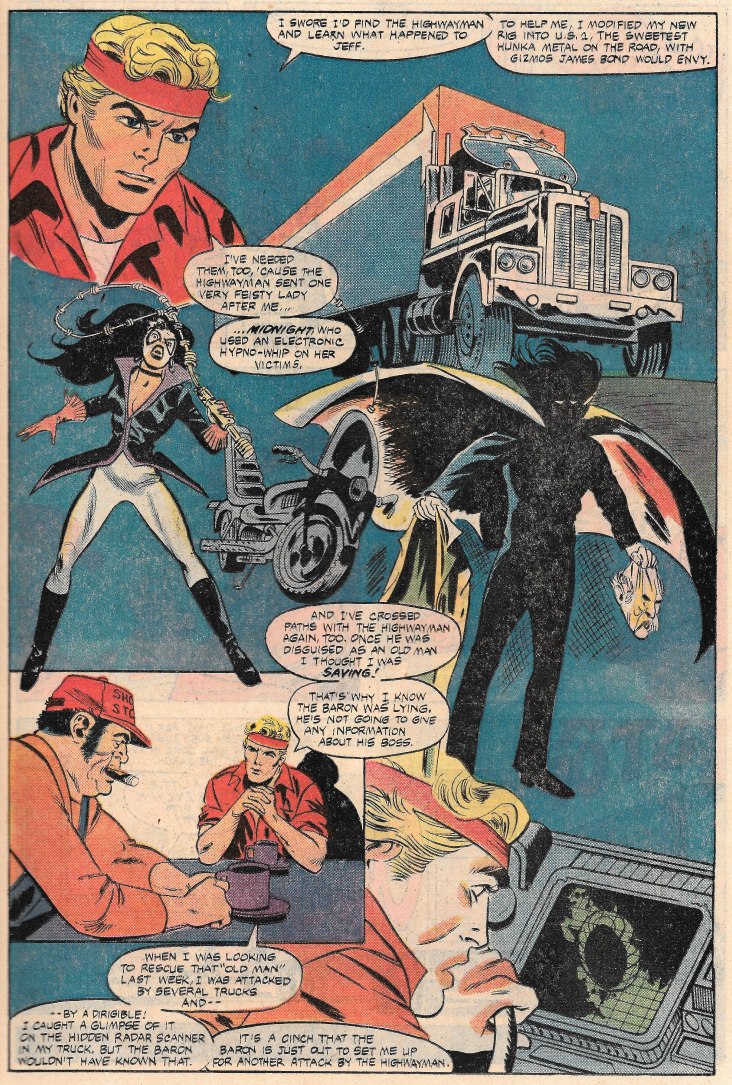 In the end he decides he MUST race Baron Von Stereotype but that he feels his upgraded weapon loaded rig is up to the challenge. 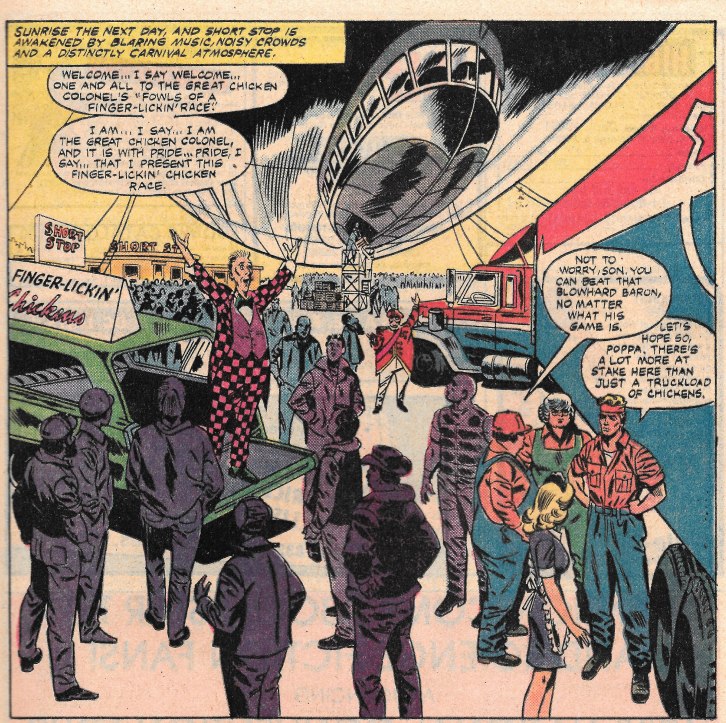 And so we move our story on to THIS mess where the contest is to haul chickens for a thinly veiled Foghorn Leghorn. I think of Al Milgrom as a staple of Marvel comics due to his inking, but this parody of the Looney Tunes character takes things too far. EVERY line he says has to include the halting speech patterns of the cartoon rooster. 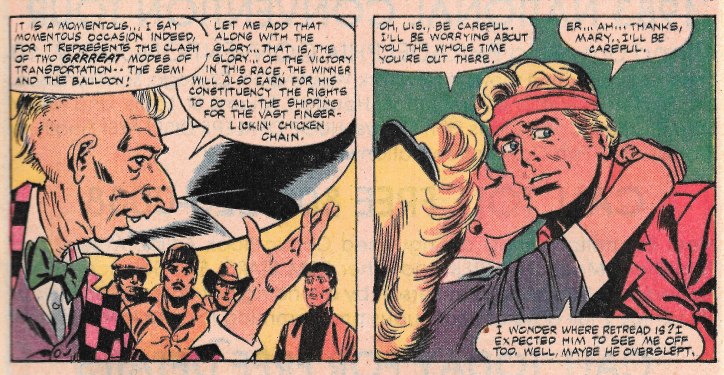 The southern speech pattern is a bit too much even by the second panel with the Chicken Colonel. Also Mary is clearly smitten with US and he is apparently gay. Jeeze guy! Kiss that girl on the lips! So by page two of the Chicken Colonel, we are ready to scream because they have to…I say…they have to shoehorn in the Leghorn to every dialogue box he has. I'm bleeding from my ears now Milgrom. Thanks. 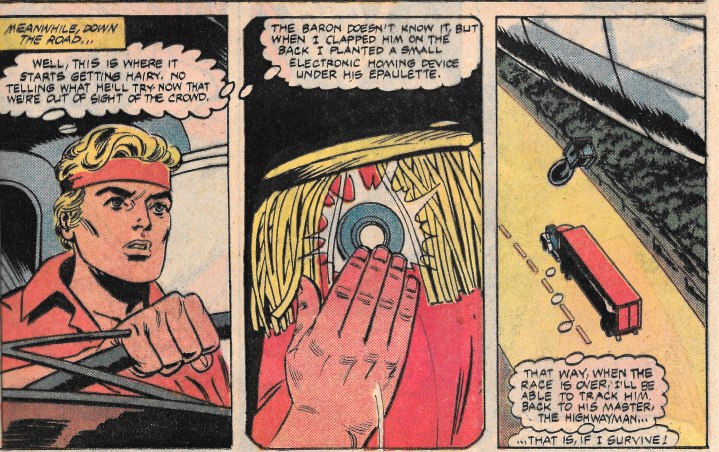 We get a hint of US's plan here: he attached a tracker to the Baron and will wait until after the race to activate it. Then he can track back to The Highwayman's hideout. However, he has to seem invested in the race so the Baron won't suspect. 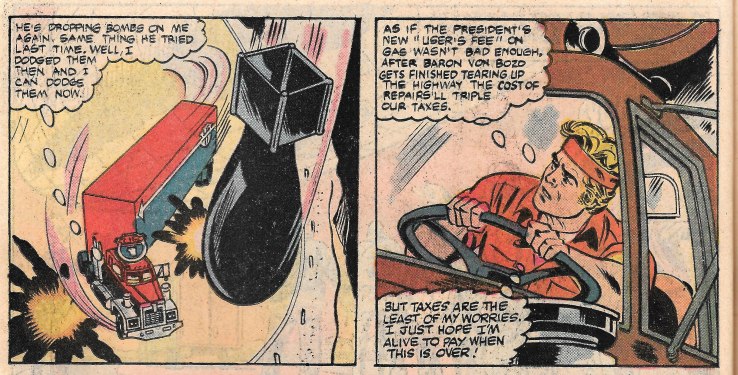 The Baron however has other ideas about what US will do after the race, which appears mostly to be rest in pieces in a smoking crater. And he expresses these ideas by dropping a bunch of bombs on our hero. Which leads US to make prolonged musing about interstate highway funds and tax appropriations. 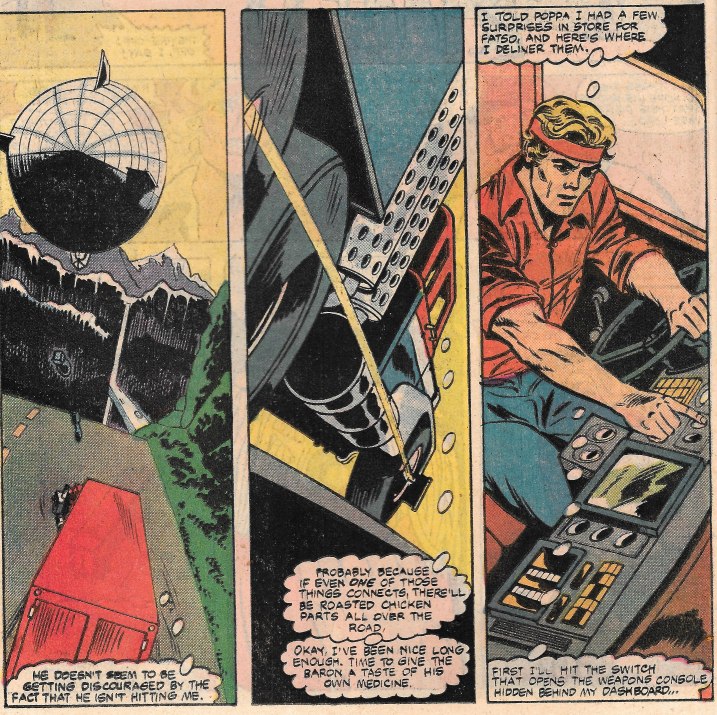 ONLY after a discussing how this turn of events affects his tax status does US access his secret trucker panel of secret trucker weapons. Which is not really much besides missiles in this issue, but maybe we will get more Mach 5 stuff in issues to come.
The missiles embarrass the Baron, who decides to defy The Highwayman's orders to keep US alive and to just kill him with bombs instead. 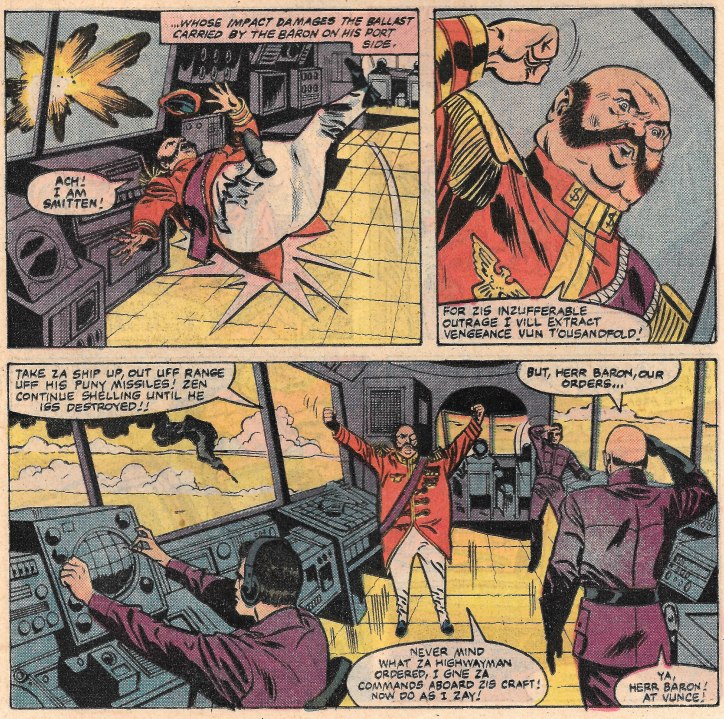 Oh they gave him an entire crew that speaks in sitcom-German. Oh so bad! Meanwhile Retread bails out of the sleeping compartment in US's cab like he's the combined spirit of Spritle and Chim-Chim. Retread is kind of useful, pointing out that blimps don't do well in harsh weather and getting US to plan a sneak attack using an inbound storm system. 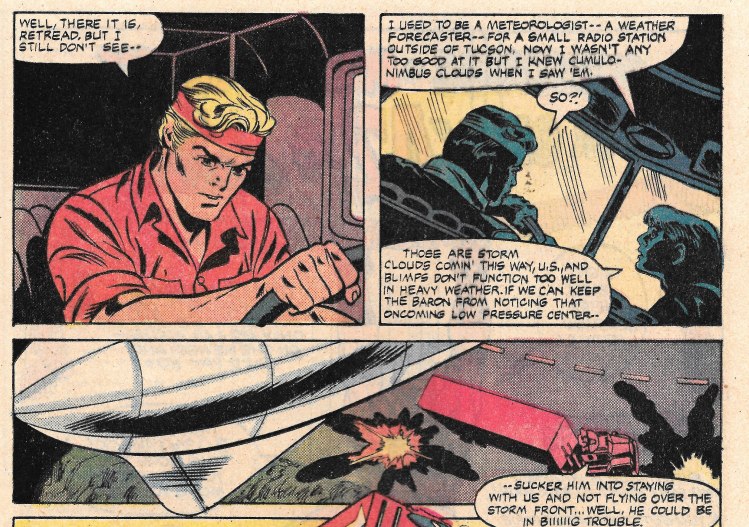 Just to make sure the Baron is falling for his plan, US uses his CB radio power to check out what the Baron is telling his boss, the Highwayman. Which he just happens to be doing right at that moment. 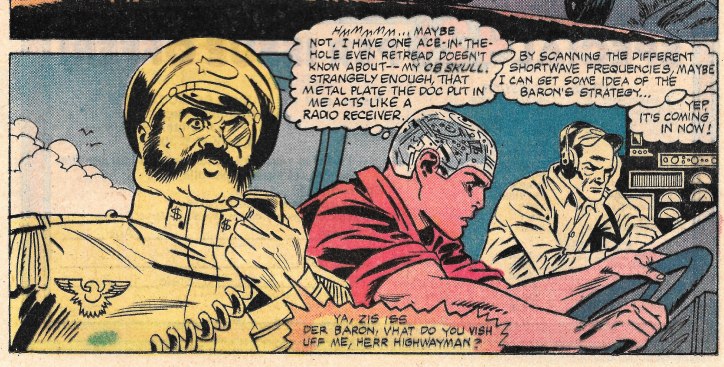 And then the Baron leaves the channel open so US knows all his other plans. Talk about plot conveniences. 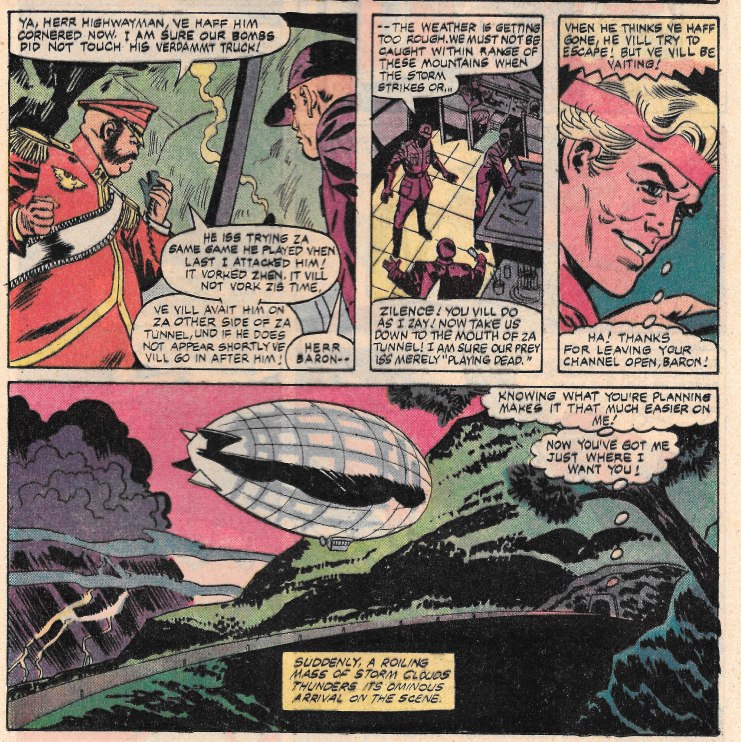 US hides in a tunnel for a bit and then hatches a brilliant plan of standing on the cab and trying to hit the Blimp with a thrown grappling hook, which succeeds of course, because screw you physics.

Also screw you because he is able to scale up the rope to confront the Baron in his own floating lair. 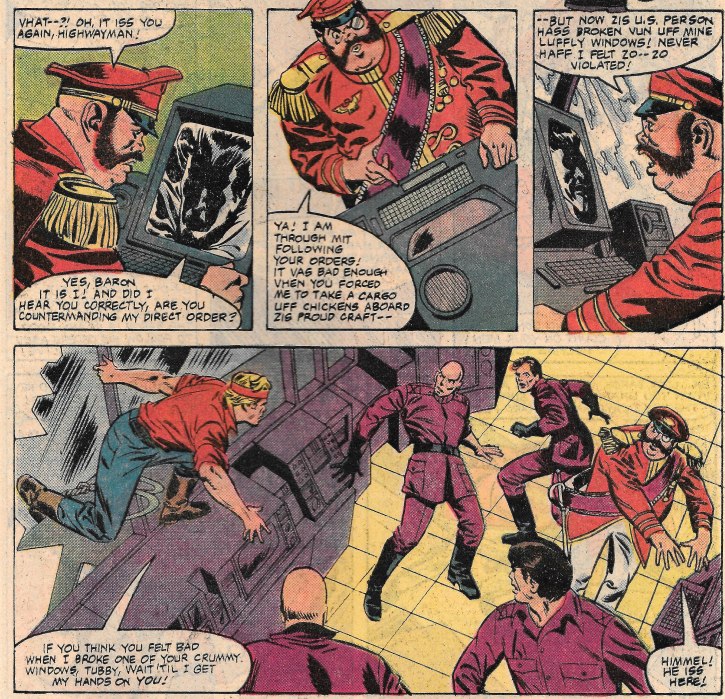 Appears the Baron is really concerned about his Blimp insurance rates going up to be so upset that US broke one of his windows. Of course a fight ensues and it is silly and convoluted, with the Baron's girth not posing any speed hindrance. A high point comes when US uses his steel-hard head to break the Baron's sword with his skull. 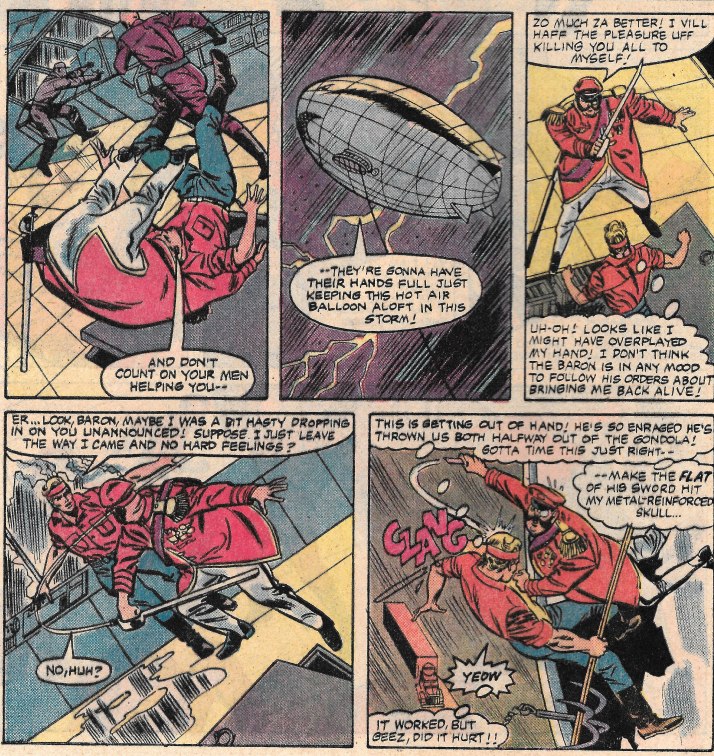 And then the chickens get released in the ensuing chaos. Because every fight scene is better with chickens.

It also leads to one of the worst panels in comics. 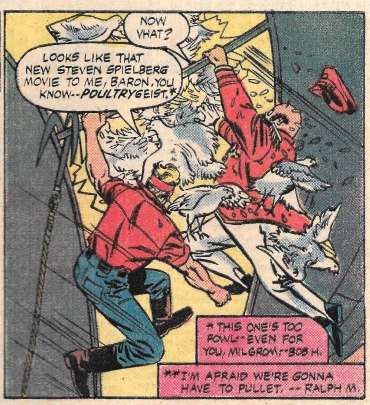 Note below that a bit later we also get the Hogan's Heroes joke. My point is that if you are going to state something is like a bad joke, maybe don't include it at all. 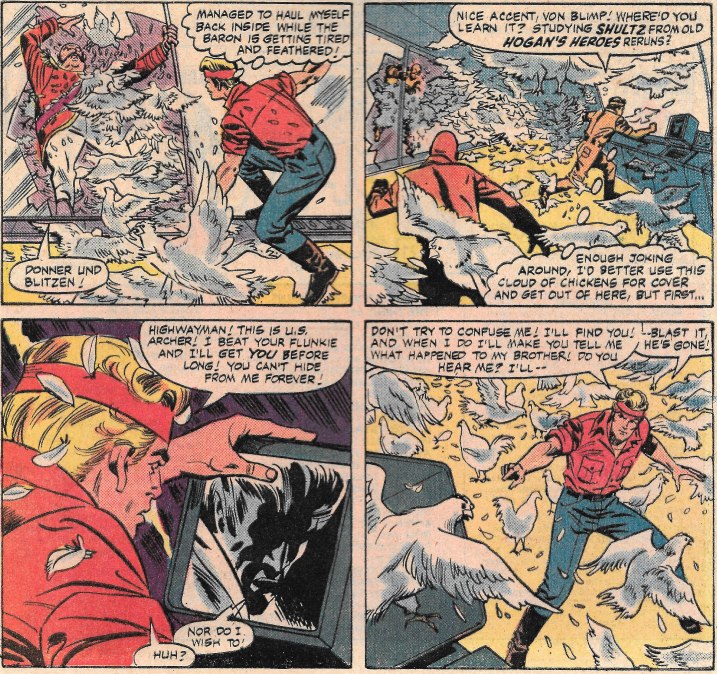 The fight ends with nothing resolved. US cuts his losses and the blimp free after deciding it might take his rig with it as the storm increases. The blimp limps off and US notes his carefully placed tracking device won't work given the blip's heading. Also he makes reference to a 1960's group, which dates the book quite a bit. 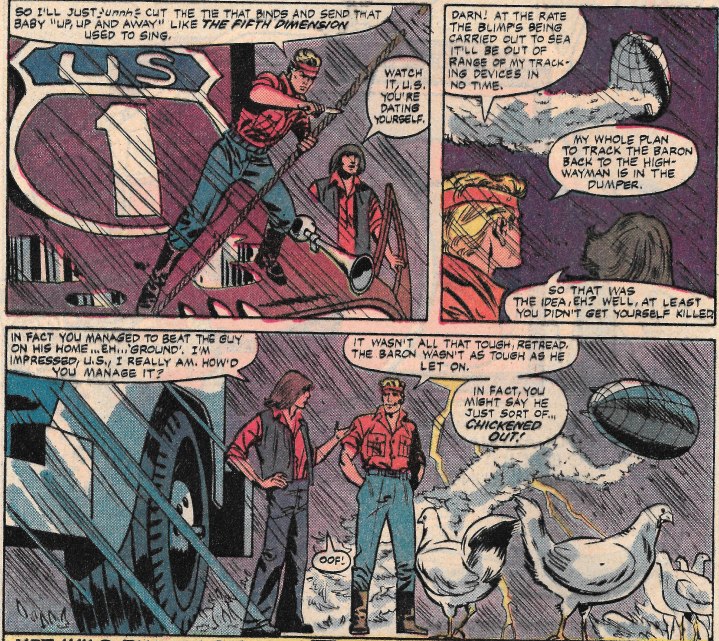 I didn't really dig this issue. There were far too many problems with the characters. It does feel a bit like a Speed Racer clone, with lots of outlandish people and plotlines. If you find this silliness up your alley, be my guest. For me, I've got other loads to haul out of the Crapbox.
Posted by SonOfCthulhu at 4:55 AM