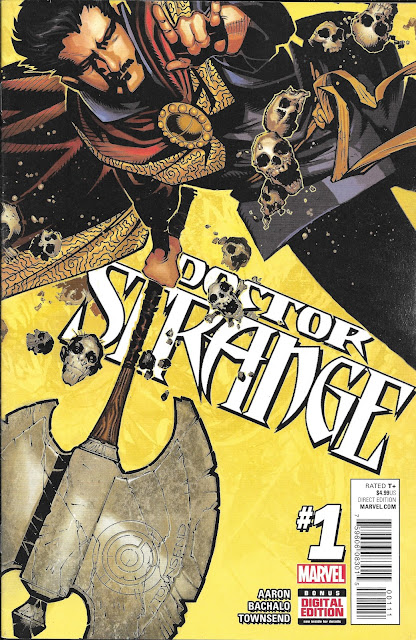 This time out we cover the whole ball of wax and how that relates to the current Stephen Strange, the Sorcerer Supreme and Master of the Mystic Arts in Marvel's post Secret Wars converged reality.

The Makings of a Sorcerer Supreme: all together now!

In the past four reviews we've covered all the traits that are required to be worthy of the title of Sorcerer Supreme. No mystic is worthy of the title unless they possess unquestionable wisdom. Next they must feel confident in their own abilities and be able to look upon the world with eyes that can see the wonder of it all. That person must never give up on finding a bright side to every situations, approaching every event with a sense of optimism that even the worst situations will work out, even if it means that they must make a personal sacrifice for it to do so. And they must have the will and determination to never give up on their ideals of a peaceful resolution for the good of all beings.

When Marvel co-mingled their universe last year, we got slightly altered versions of everyone. So today we are going to look at the first post Secret Wars (2015) appearance of the character in his very own title.

We begin this issue playing catchup and it is clear that Marvel wants to concentrate on new stories and not spending a lot of time rehashing what has come before. We get this one page, mustard colored retrospective. 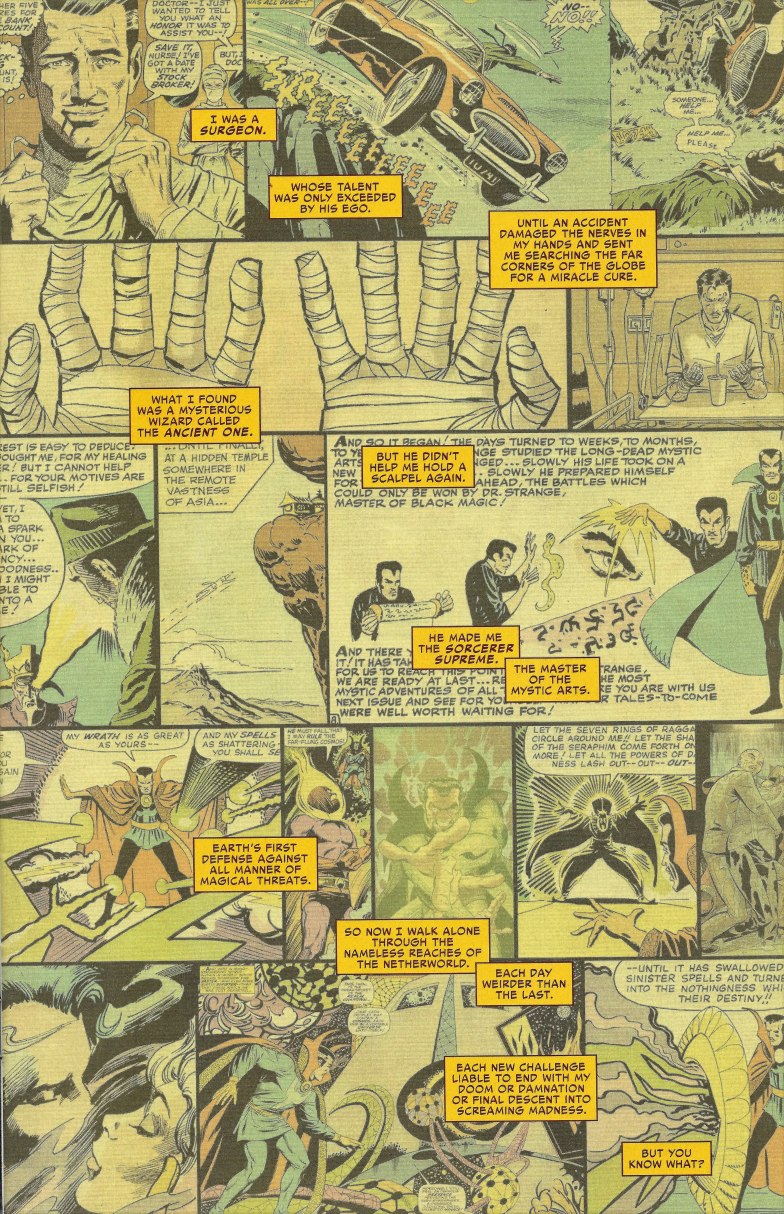 I find it adequately conveys to old-school Strange fans that this maybe a new direction for the title, but that Doc is still somewhat the same guy they know and love. In addition, for new fans it tells them there is important backstory here that will be skipped over to get to THIS: 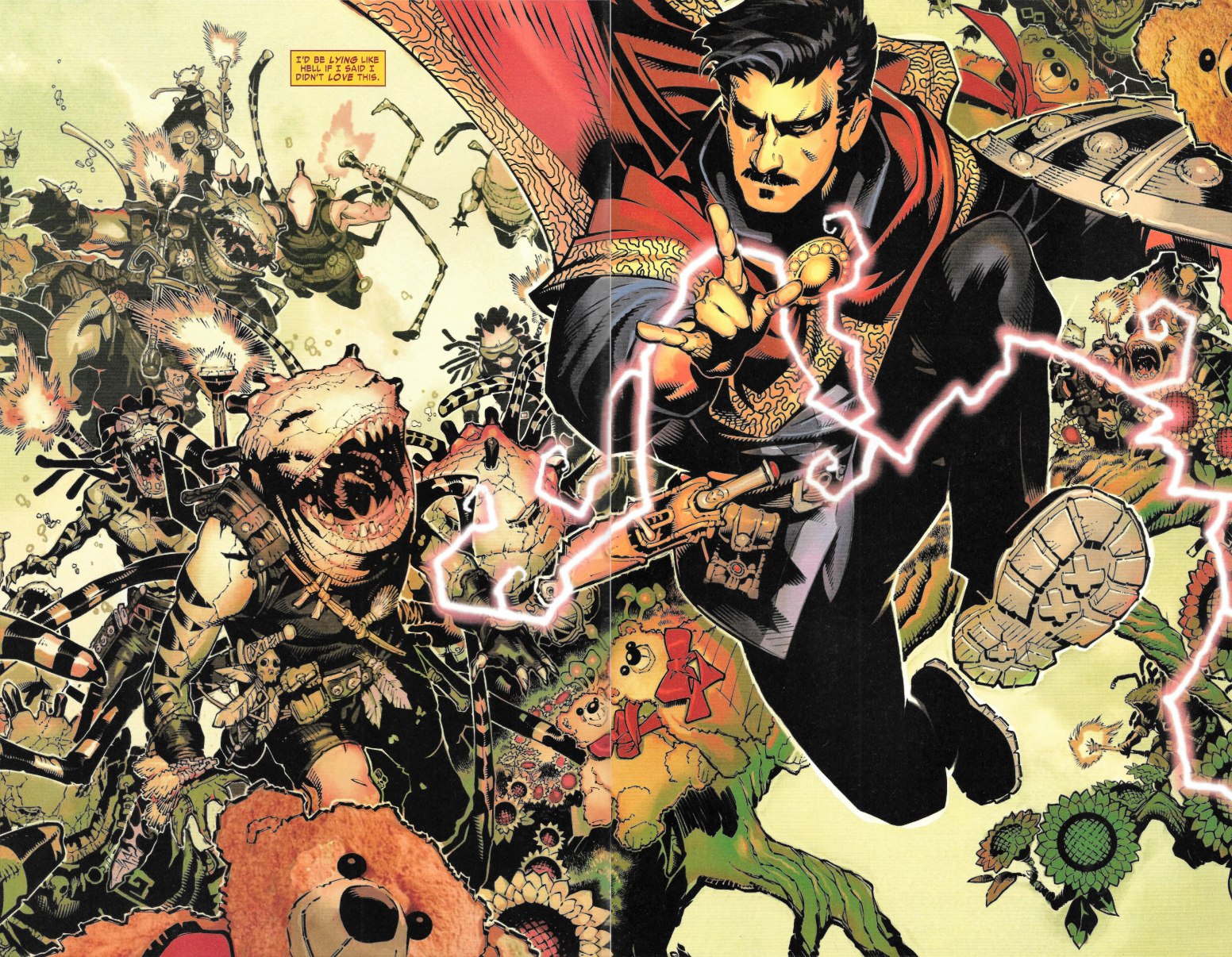 That's right! Action. This book will be about Doc Strange doing things with supernatural enemies chasing him around. I am not going to judge this as good or bad, but from the look of page 2 Marvel is attempting to stop with the stoic levitating and standing still while facing down evil, opting instead for a more adventure driven, daring-doo type look and feel. Maybe that's just an artist choice or maybe both that and editorial mandate. Either way, I'm still in. Doc can get a bit young and hip if done right. Carry on.

One other thing of note that might be more concerning: Doc is carrying a dagger and a shield. Not that from time to time he can't use mystical props, just…he is primarily a magic user that lives by his wits. We don't need another physical/stabby/hack/slash character. Strange was always the magic-user at the Avengers party. He didn't delve into the melee, but cast spells over the heads of the fighters. Let's see how this goes. 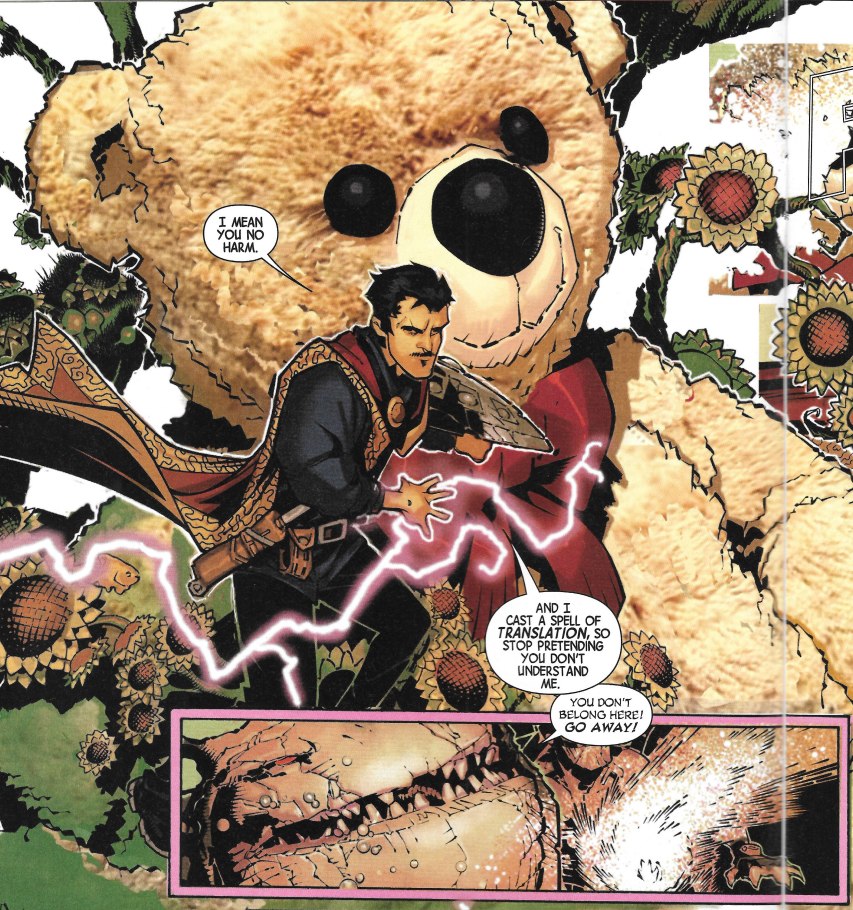 We get Strange acting with compassion and WISDOM, trying repeatedly to talk his way out of a confrontation before wading in.

And then he abandons the pretense of using physical force of any type for a spell and I know we are on the right track. 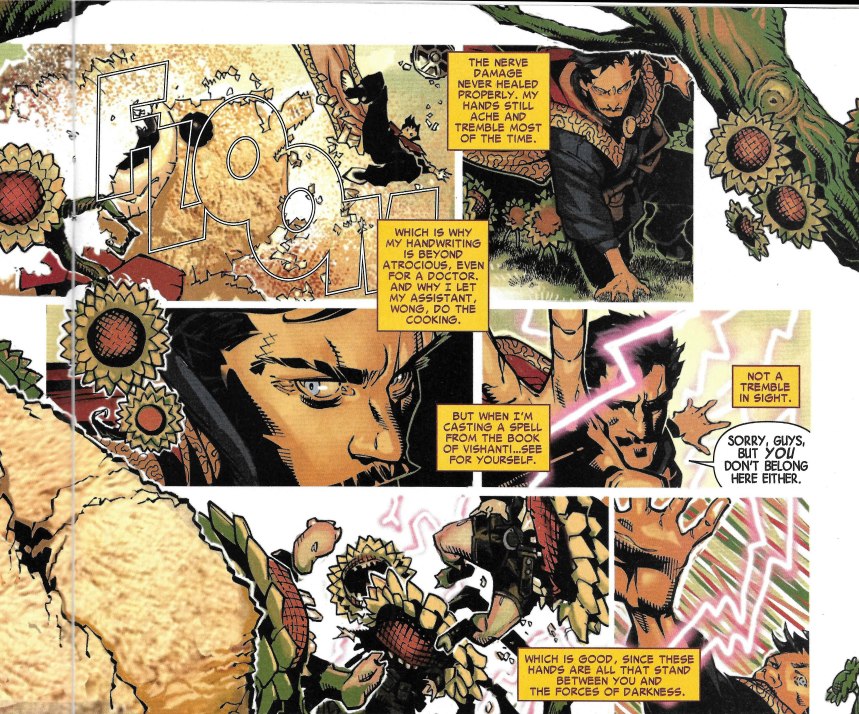 And it happens with the added benefit of hearing this internal monologue that speaks to his DETERMINATION. They are hooking in to the Doctor we all know and love until… 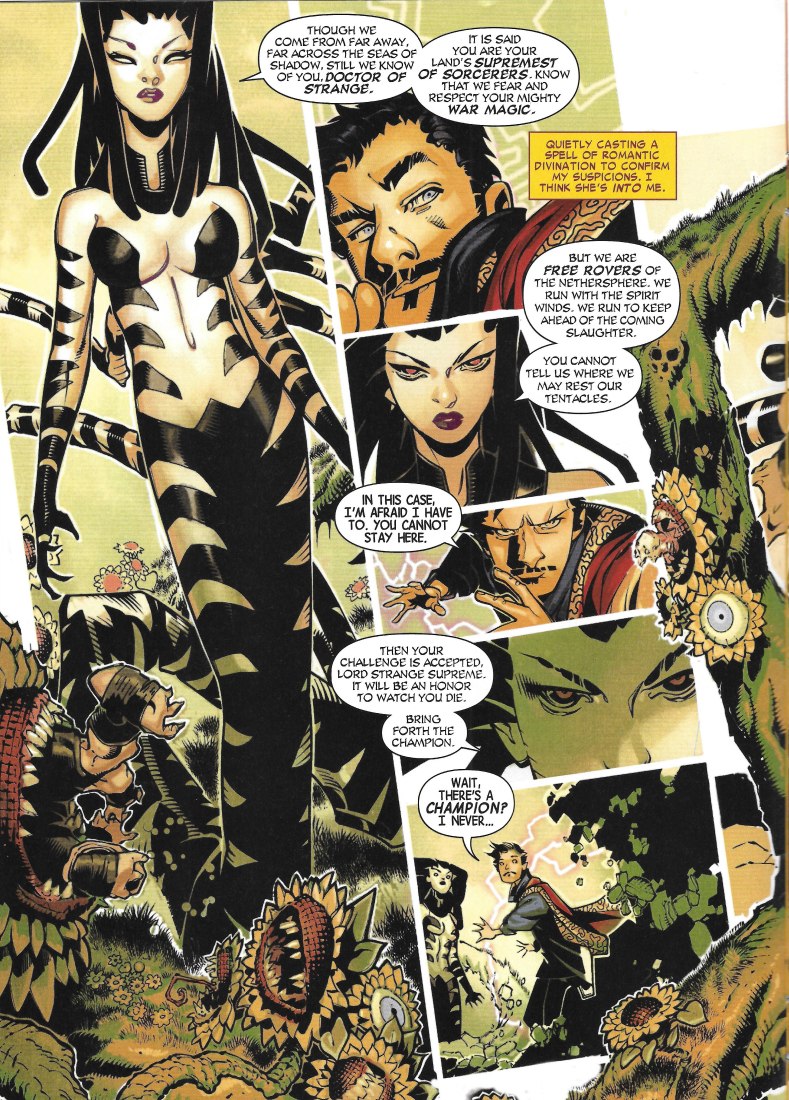 …he channels a kind of lusty, cocky twenty year-old's attitude. I find it a bit off putting. We don't want a narcissist, objectificatifying Sorcerer Supreme, which is the frat-boy level this internal monologue evokes. Doc Strange is supposed to be "enlightened" and that means he doesn't chase the alien tail of every multi-dimensional being of the opposite sex that he comes across. And that's what this feels like.

Many reviewers have pointed out that there appears to be much more of a Marvel Cinematic Universe "Tony Stark" vibe to Strange in this new series, and judging from this page I can see why they would say that. Although the movie version of Stark works well, that doesn't mean we should slam every character with a mustache into that playdoh cookie-cutter charater type.

Strange is much cooler than that on his own.

Yet here we have our Supreme Sorcerer miscasting his own spells… 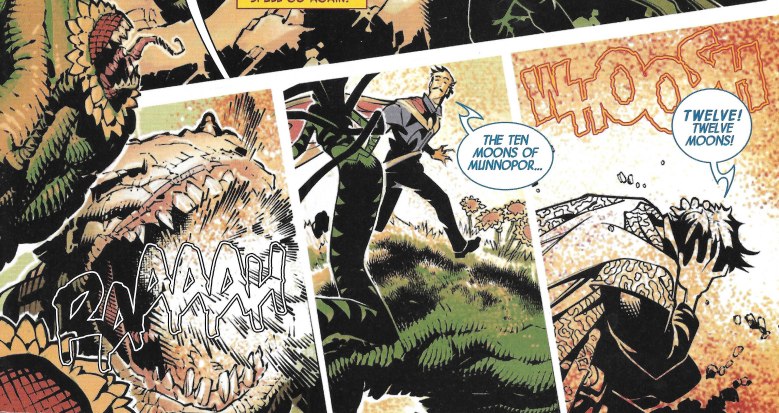 …and then macking on this snake lady like a 2015 version of Jim Kirk after being shocked that he's even alive (so much for CONFIDENCE). 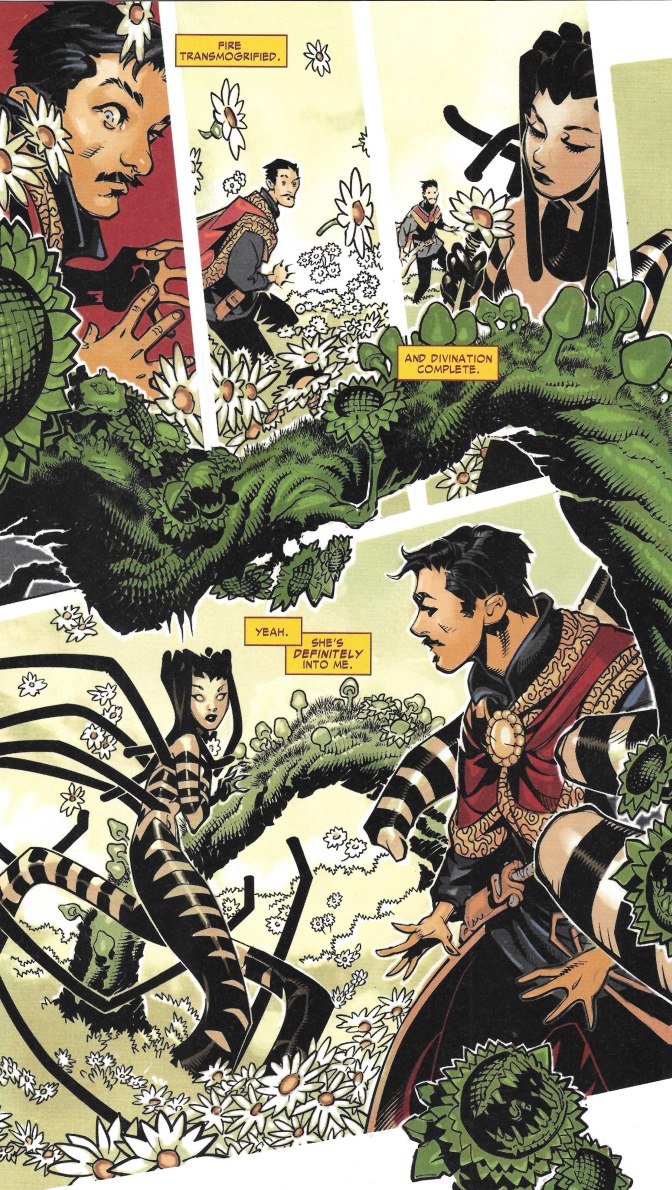 …before going full on raging hormones. 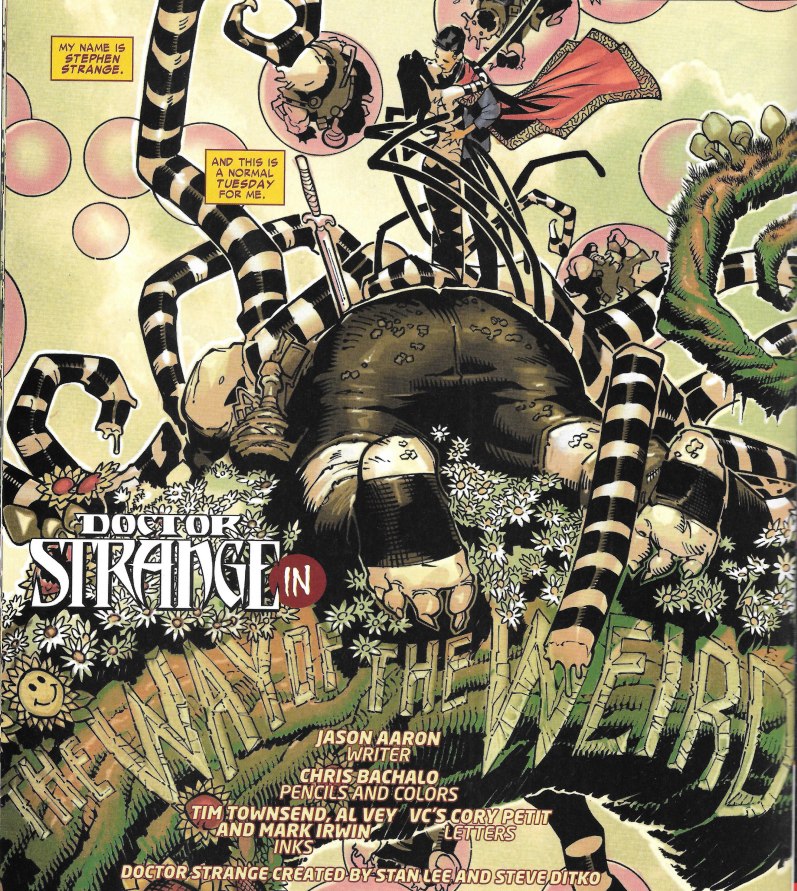 I didn't realize how much about this new take on the character grated on me until second read through. I mean, sure in the original series he hooked up with Clea, but she always seemed more "star-crossed lovers" material than this cheap and tawdry kind of one-night stand affair we see here.

Anyway, Doctor Strange gets derailed at this point by the material world. It appears this entire battle has been taking place here… 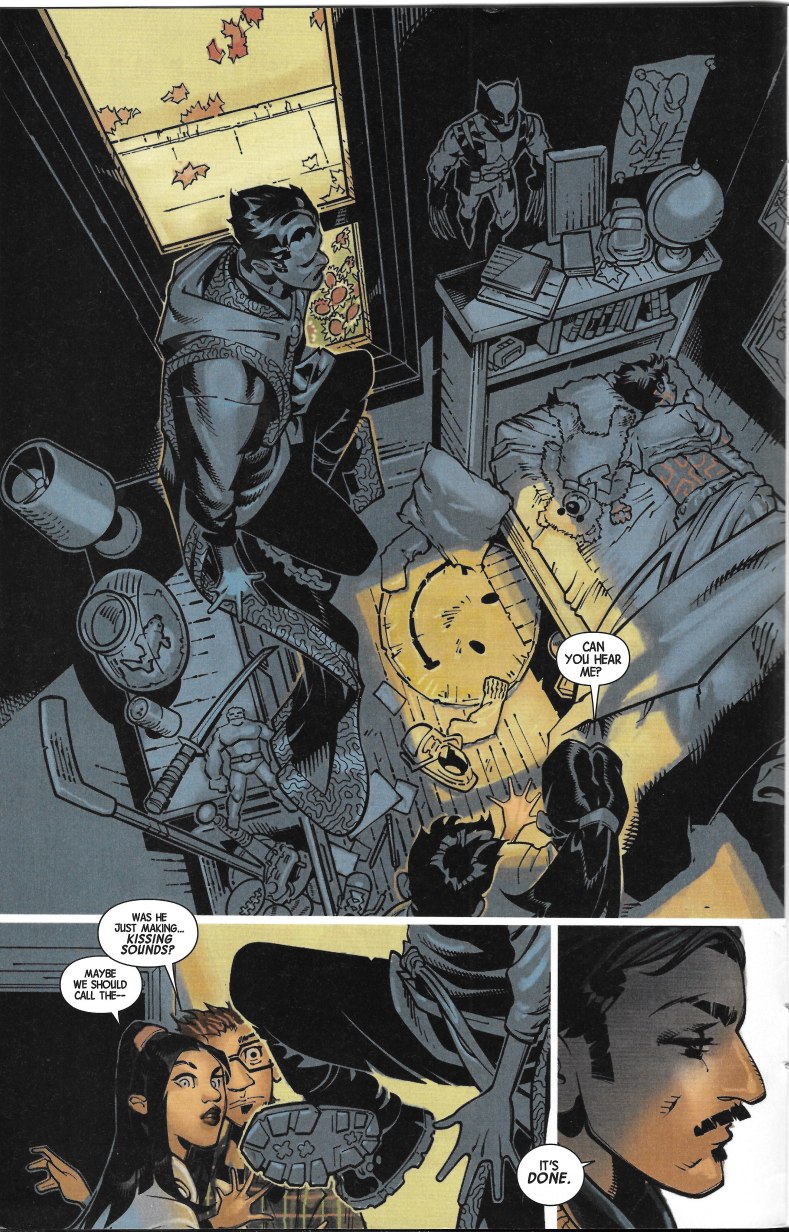 …Ugh. The demons he fought were dimensional invaders who had taken up residence in this couple's son. And he stopped to French-kiss with their leader after battle. It's…a REALLY bad start. I mean, you can't sell me on Strange being someone who would SACRIFICE for others if he can't keep his focus off his own carnal desires when a child is in danger. What gives, Marvel? 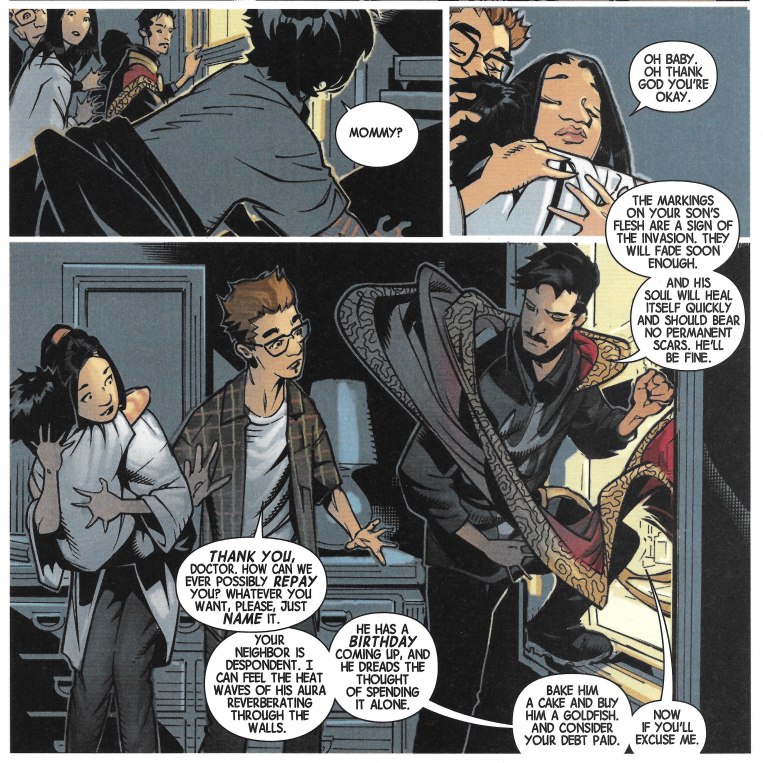 At least they get somewhat back on track with the next sequence in which the Doctor tells them to "pay it forward" by helping a lonely neighbor but this is only after he admits to sending the demon infestation off to the child-molesters at a nearby prison. Which in a world with 100% reliable courts wouldn't be an issue, but…I'm just saying it doesn't appear to be very enlightened. Or Wise.
Next page and we are back to weaving around with my feelings for this title. I mean the text boxes are okay, I dig this internal monologue for substance and content. BUT he's using his cloak of levitation like a he's freaking Aladdin, which rubs my fur counter-flatways. 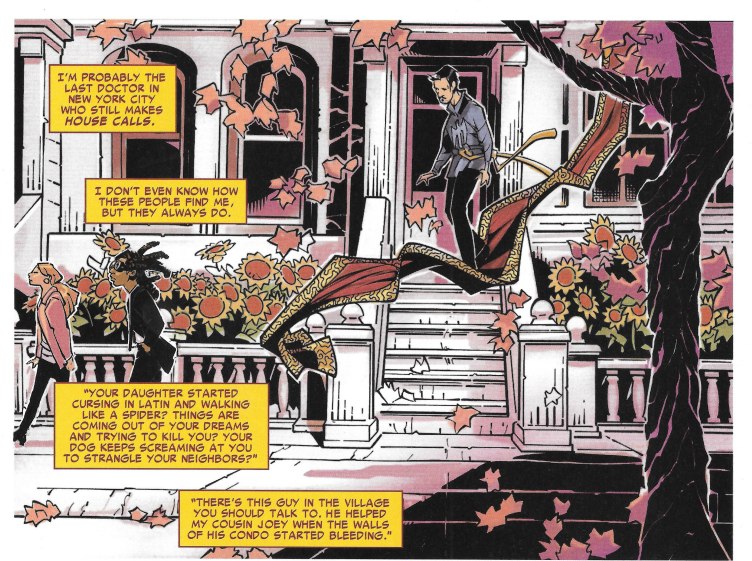 Next it is draped around the good sorcerer's neck like an afghan, which means I'm pushing down my anger not to rail against this depection, while wandering New York's streets. Seems this version of Doc Strange has an emphasis on "strange" as he sees demons everywhere, like he's some schizophrenic. 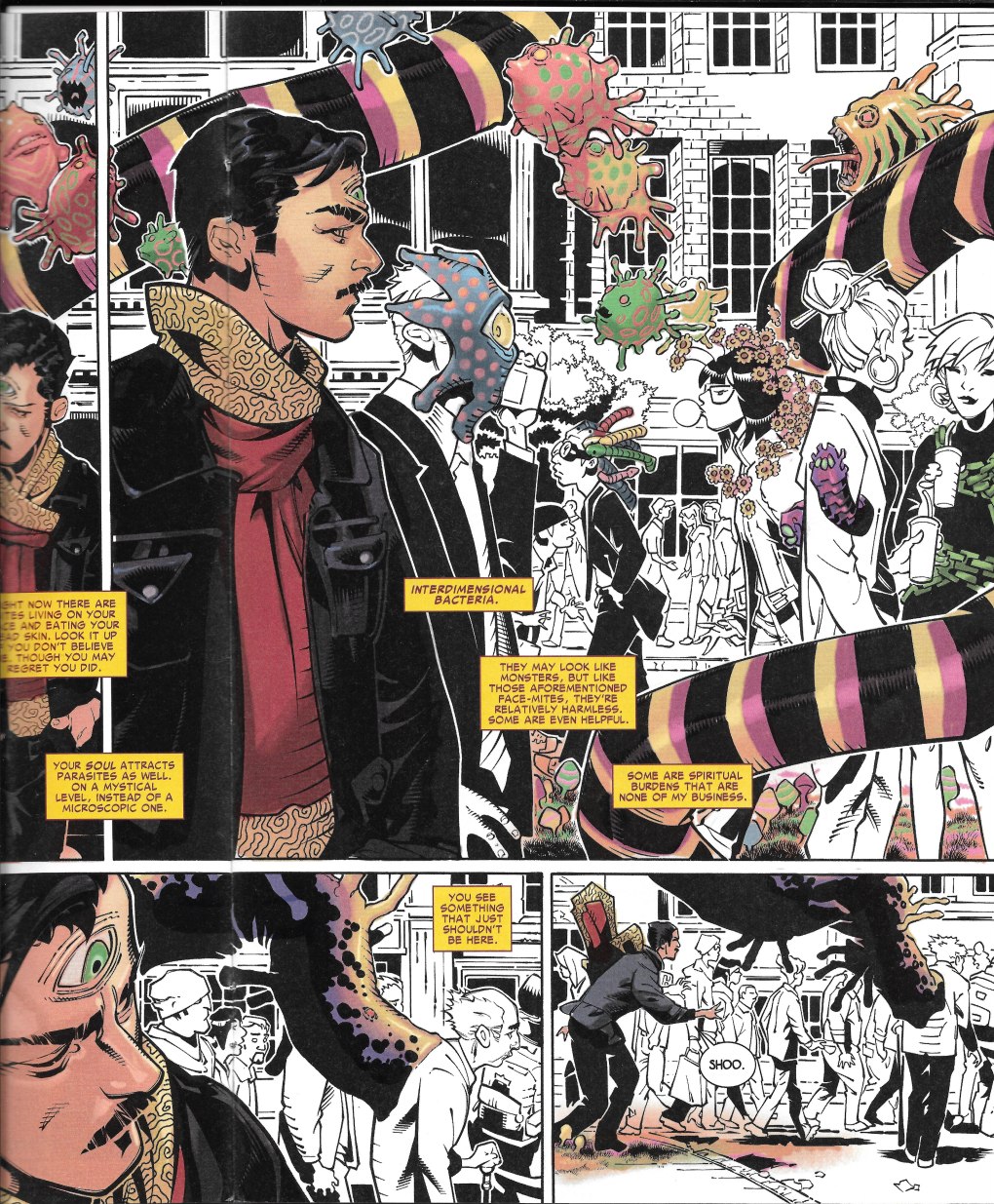 While attempting to help someone who has a giant phantom leech attached to them, he is attacked. Perhaps because he says "shoo" instead of…oh, I don't know? Casting a spell maybe. For his trouble he's swallowed… 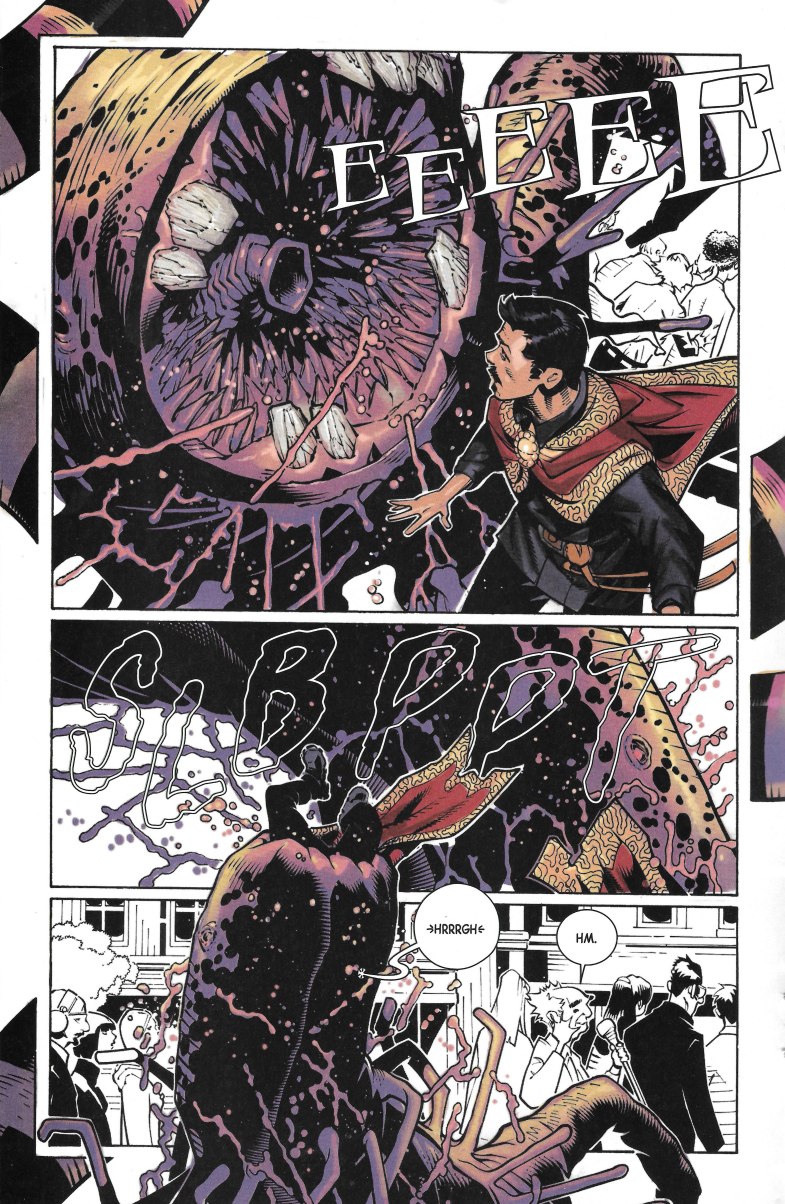 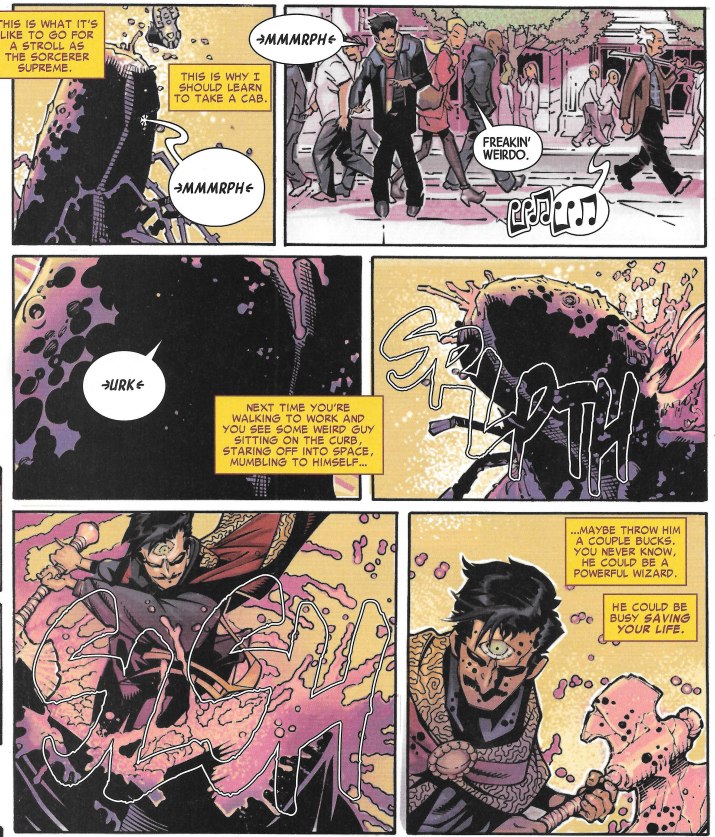 He then uses his powers (novel concept, that) to phase into a bar that looks ripped right from the pages of Shadowpact. Can DC sue if this does indeed turn out to be the Oblivion Bar? 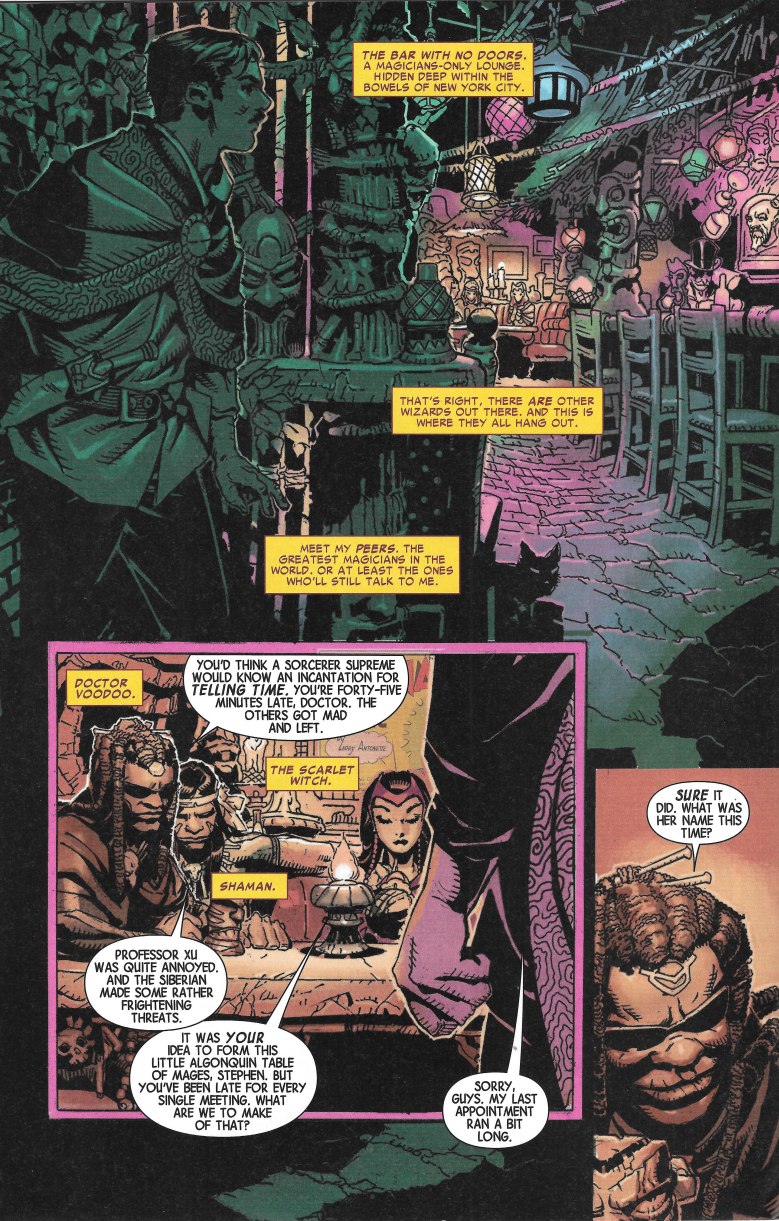 And let's point out that DC's magical heroes seem likely to go to a bar together. They were mostly middle-aged men and low powered humans with no group affiliations. In short, kinda loser-ish. I loved them, don't get me wrong, but Doctor Occult, Blue Devil and Nightmaster are likely to need a stiff drink after battling evil all day.

But Scarlet Witch from the Avengers? Or Shaman from Alpha Flight? Or Doctor Voodoo from…the z-list? All sharing a table? It's like the writers WANT something akin to DC's dynamic in the Marvel universe, but they are going about this the wrong way. I can't see these characters in the same room together, let alone drinking around the same table. They are just all over the spectrum in terms of power and affiliations.

I'm not buying it. 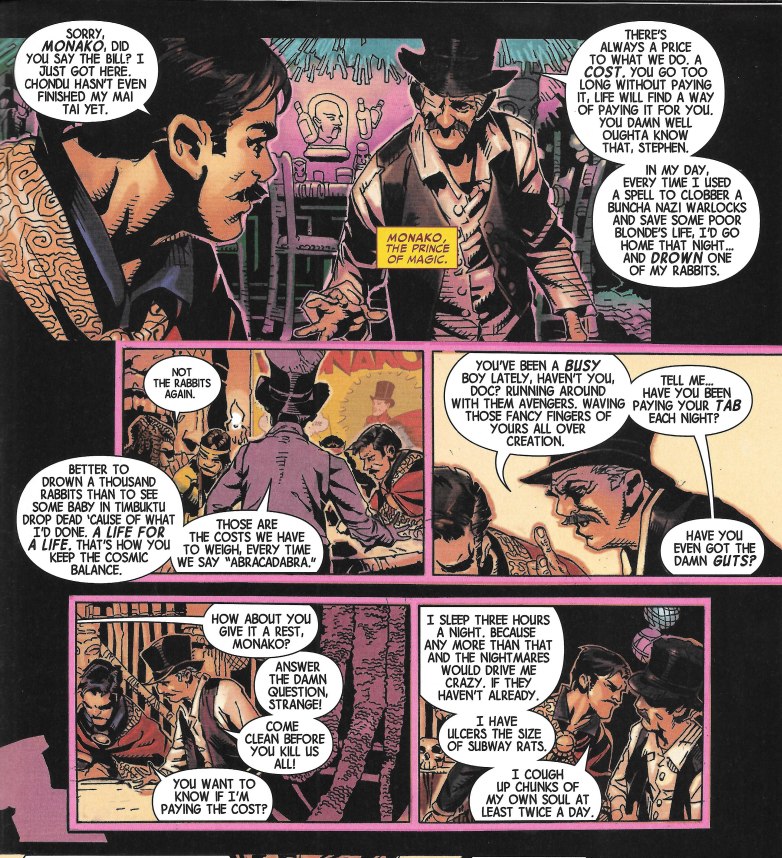 Nor am I buying this character actor pretending to be some WWII magician from Marvel's past who runs his gloom speak over the table about their being a karmic price to what they do. However…

…I agree with this point right here: Strange isn't acting the Sorcerer Supreme.

Take our outro, which has a few tweaks on the Doctor's mysterious persona, but still seems he's channeling Robert Downey, Jr. We begin with "the person needing help standing outside his doorway" cliché. 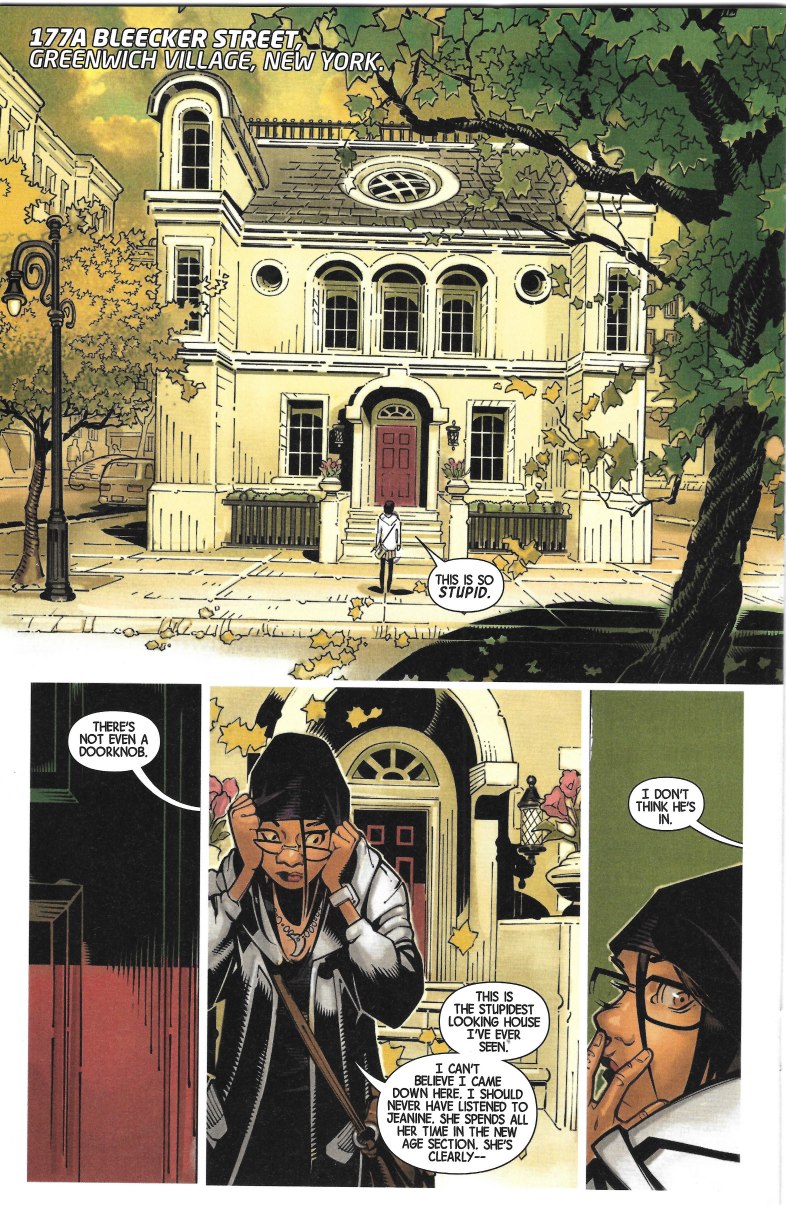 Followed by the "pretend we aren't they guy you are looking for" trope. And the "ta-da! Here I am! I'M Doctor Strange!" introduction… 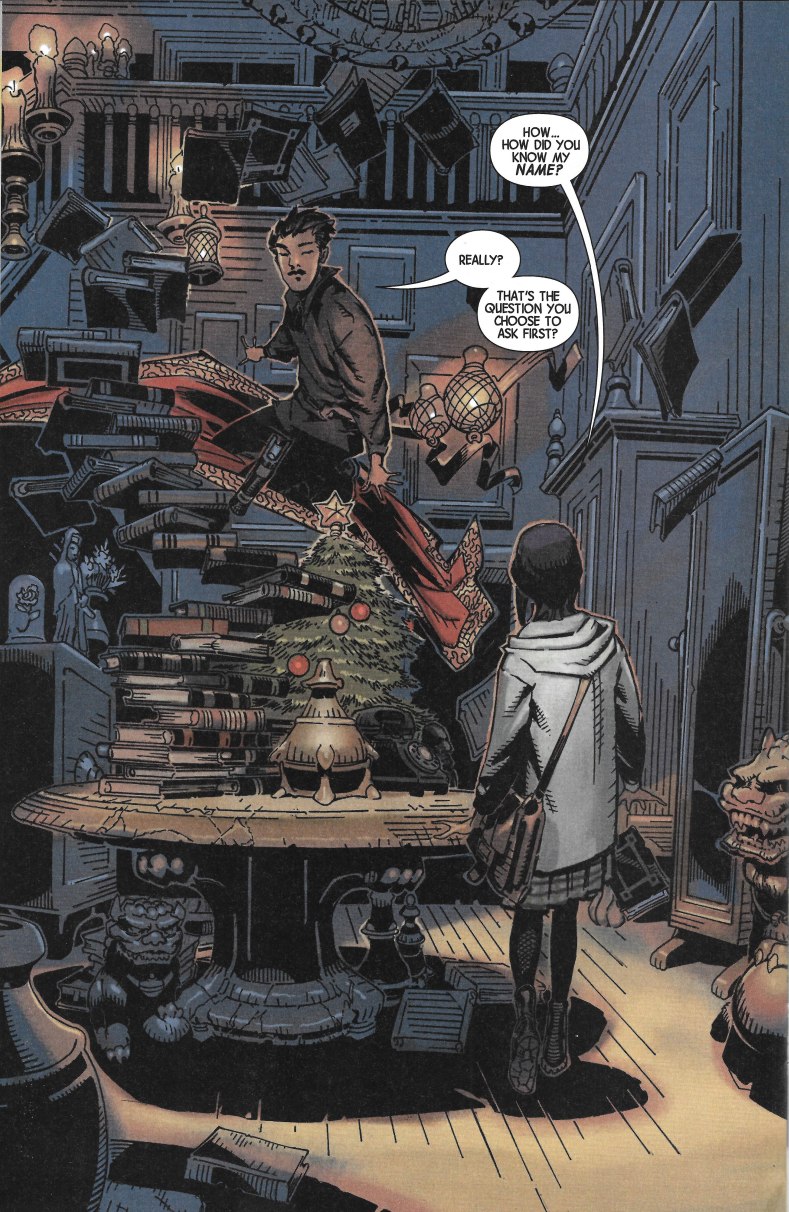 …that I kind of admit was starting to work for me (even though we are back to the cape-as-carpet bit), when suddenly… 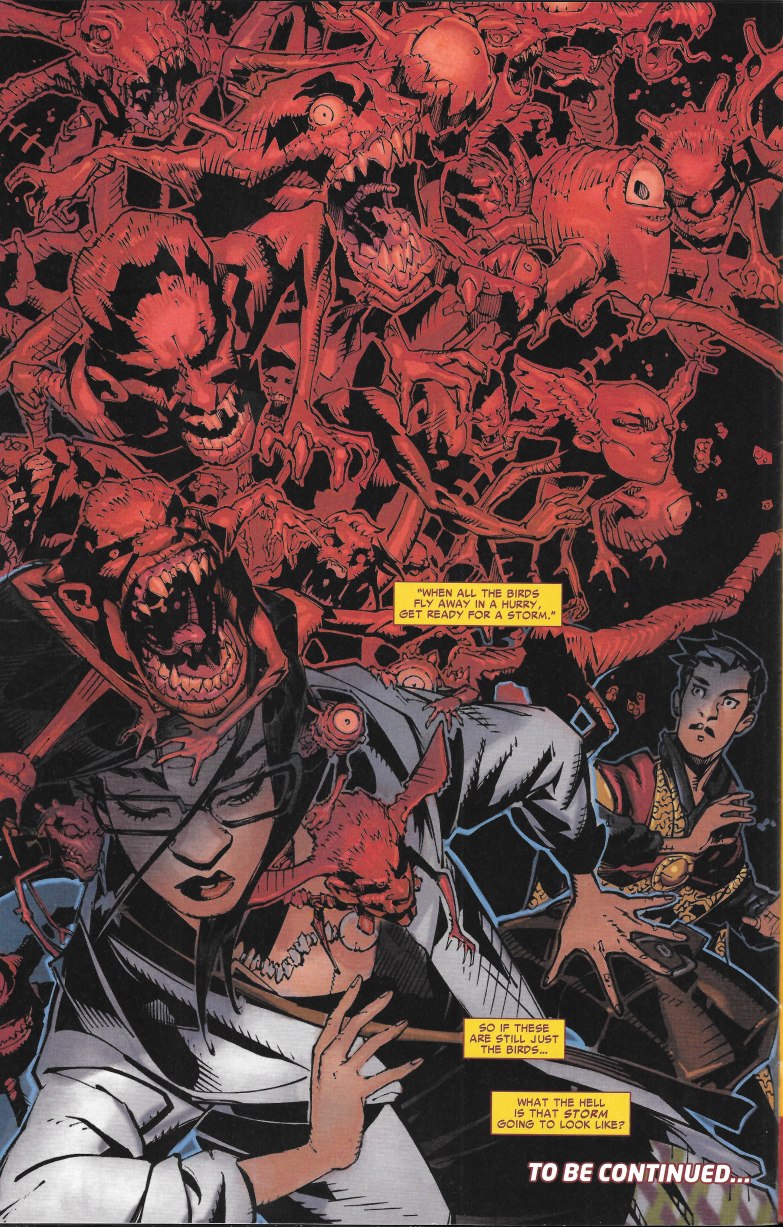 …the issue ends. With great sadness I have to put Doctor Strange #1 in the miss pile. There are attempts to take Doctor Strange to new places in this title, however those places are cribbed from the competitors, sexist, and/or turn Marvel's most powerful magic user into little more than an axe wielding melee warrior. How long until the next reboot?

Let's hope the movie takes us back to the basics of Strange. Happy popcorn munching, everyone.
Posted by SonOfCthulhu at 2:51 AM