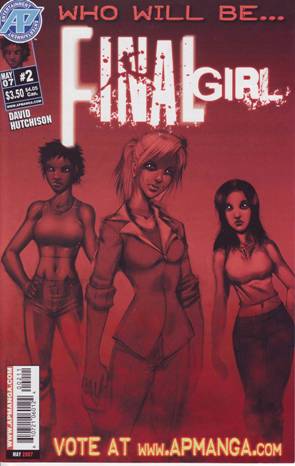 I have very mixed feelings about the Final Girl series. Brought out by Anartic Press in 2007, Final Girl tried to be a first in many ways, unfortunately all of them had been done before. The story was a standard horror tale glommed off the more popular Silent Hill video game. So the story is not anything new. They added a marketing twist here that the readers would get to choose which one of the four girls in the series survived. I’m guessing all the men bite it or something. Also, I’m not sure that re-using the Death in the Family “Robin lives/Robin dies” voting ploy makes this book unique in any real manner. AP seemed to think so. Sadly David Hutchison’s writing ability limited these four girls characters to flat stereotypes. The young ladies hair and skin type are their defining personality traits.

So why wouldn’t I just pan the whole book? Because ARTIST David Hutchison’s (yeah, same guy) gorgeously moody and haunting visuals are truly inspired. I’m sure they are not to everyone’s tastes, but I really dug the stylish visuals. Even if I feel they are ripped off from Silent Hill, they still serve to set the exact atmosphere this genre needs to be effective. But drat it all if there isn’t one single thing going on beneath those pretty 'n creepy pictures.

I know. I NEVER recommend style over substance and the substance in Final Girl is slighter than tissue-paper thin. So we better be talking some dramatic pictures, right? Let me give you one page of the three-page opening backstory from issue number two. It tells the tale of this isolated small town where the new owners of the ironworks factory are all creepy-secretive evil, the town is decaying from within and yadda-yadda-yadda. You’ve heard this one before. 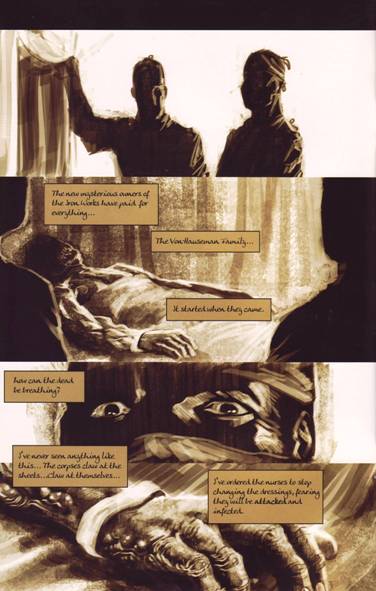 But those four panels there show that there is a definite “right way” to display this haunted backdrop. So what if it has been done before? The Maginficent Seven is not a bad movie, know what I’m saying. If only the rest of the book were as good as the images. In fact issue 2 is all setup. After the neat four page intro we find our cast of nine (five boys and four girls, making nine stereotypes in all) with a menacing giant bear-thing about to attack when at the last possible minute this mysterious ski-masked fellow saves them by distracting it so they can catch its paw in a railroad track switch. 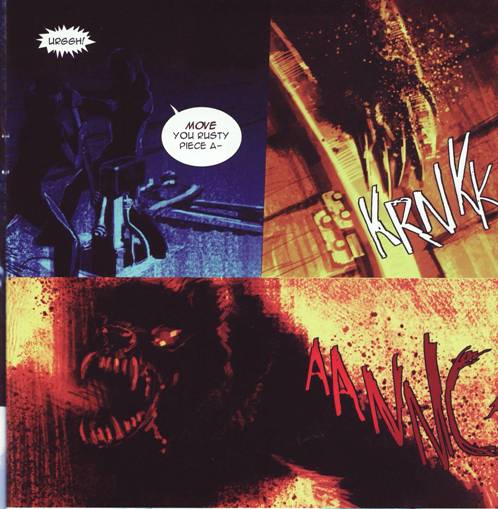 Anyone having first season LOST flashbacks? No? Just me? Okay, then. The art style here is all vague impression and shadowy half visions. Precisely as it should be. Keeping the details at a minimum means the more the audience is allowed to let their own mind fill in those gaps with horrors of its own. This strikes just the right balance in the art which astounds me. Given a good co-writer this might have been a blockbuster success.

Sadly that just didn’t happen. By trying to man both helms, Hutchison comes up short on characterization. And that’s a much needed element since his plot is unoriginal. Here we have another cool panel of the group making way to the rescuer’s underground lair. This is about as good as the discourse gets for any of the characters. Note that there’s no way to match any of these word balloons up with a character. Pick a bubble and it could be attributed to any one of them. That is a pretty damning statement. 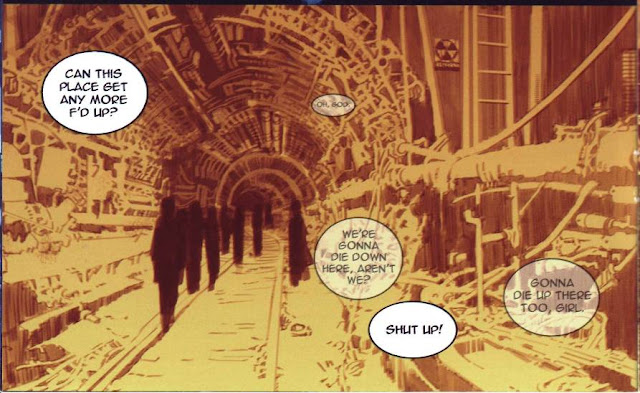 Once they reach the underground hideout we get to meet our Final Girl cast. Everyone gets one panel to introduce themselves. It seems more like they have to explain their existence in 25 words or less. Here’s a short look at what passes for deep characterization in the book. 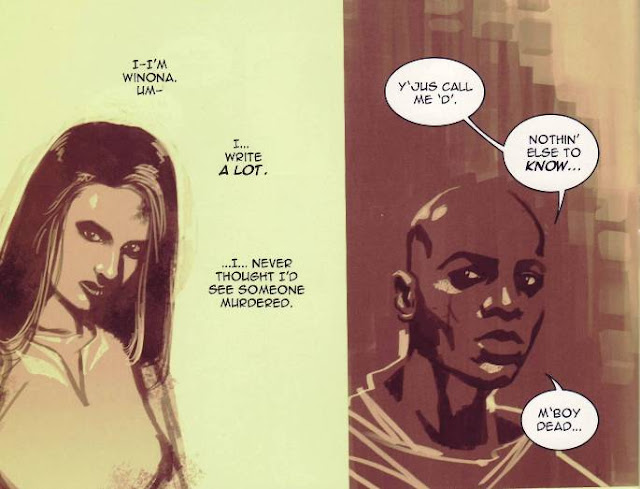 It’s like Hutchison took a class in “Stereotyping 101.” The group of victims are so cardboard thin I’m afraid the monster will just knock them over instead of killing them. The male cast can be summed up as: the black “street smart” guy, the class brain, the brash stoner, the goth/emo guy and the football jock. Hutchins appears to have cloned The Breakfast Club.

Surprisingly the girls are LESS fleshed out than the guys are. You have Winona, the red head, who writes a lot. No, really! A LOT. Look it even says it in BOLD ALL CAPS up above. How much does she write, you wonder? Well, in the time it took you to read this paragraph, she’s written 8 haiku’s, 25 verses of emo poetry and come up with a three page interpretation of the entire album “The Black Parade.”  Also you can guess the token gangbanger guy who talks street inhabiting the next panel over is just by his skin color.

Oh right! Heather. The less said about her the better I guess. Heather is the brunette. And that’s also her personality. She’s probably the one the audience will end up saving. Because she’s so…uh…um, personable. 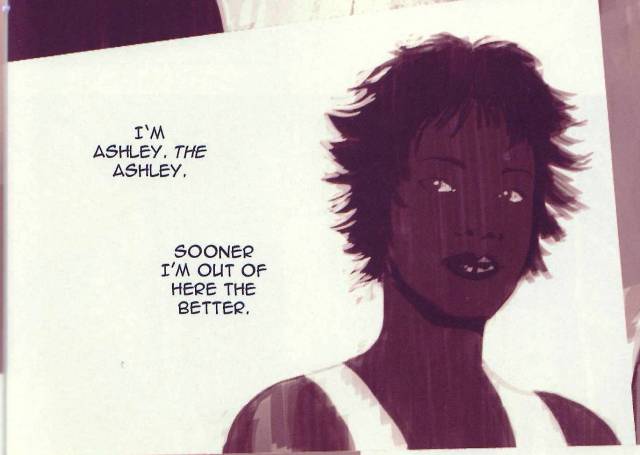 This is Ashley, and unless you had some previous misconceptions about which Ashley, she’s glad to tell you that’s she’s THE Ashley. Someone should remind her that being a bitch in a horror setting usually gets you offed first. Or maybe someone should suggest that she go for a walk down by the lake alone while wearing a t-shirt bearing the Target company logo on it. I kid, I kid! Also – a token black chick? Buuuuuuut.....She’s also the snobby, elite rich kid, too. Cause this an equal opportunity monster and stuff. 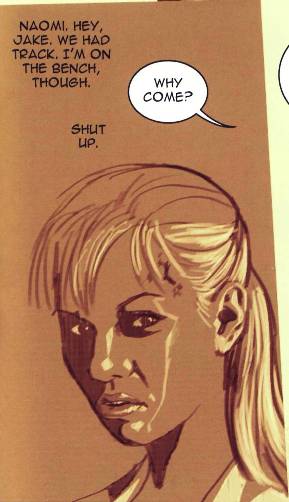 And last up we have a blonde, which should shock no one. Unless you were hoping for some additional ethnic diversity, which I’m glad the author didn’t think of. Otherwise we’d have so many generic characters standing around it would take a whole issue just to list them. Each without any defining personality trait, too.

To complete the cast introduction, the guy who saves them ends up being called, get this….”Mr. Man”. Earlier when asked for his name, he told them to “Shut up. We can talk when we’re not exposed.” Yet even when they get to his safehouse, he tells them the he has no memory since he woke up in the middle of one of the town’s streets. Complete amnesia. I don’t have to go far to say that I could come up with something better than that as a writer. He talks about the horrors that roam the streets, killing anything in their way and builds up to the reveal of this guy: 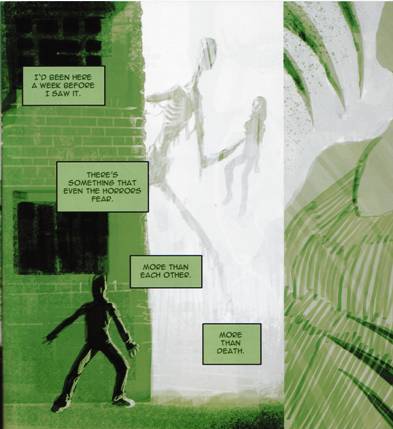 Meet Final Girl’s stand-in for Pyramid Head. He’s some kind of ghastly 20-foot tall zombie skeleton-thing, and I love that misty shadow he throws. Apparently the rest of the town’s twisted horrors give reverence to this guy, so much so that Mr. Man says they worship him. So he’s someone to avoid, I’d say.

As for a plan of action to get out of this town of terrors, Mr. Man has some thoughts on that too. He’s seen people, real normal-type people, working at the town’s steel mill. The same steel mill that was mentioned as being the origin point of all these terrors in the introduction. So of course the obvious thing to do would be to get out of town by heading away from it? If you said yes to that, you haven’t been watching enough horror movies. So the plan is to cross this railroad bridge to… 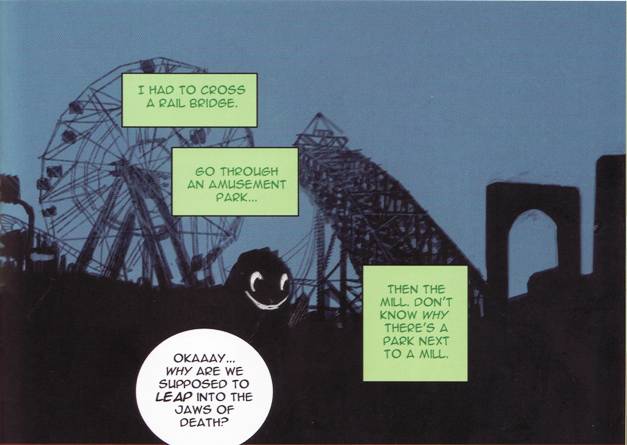 Exactly! Take the railroad bridge to the scary amusement park of fear then onto the pants-soiling steel mill of horror. Much better idea than just LEAVING TOWN. This is why all the councilors at camp Crystal Lake end up dismembered. All these warning signs go up and they just completely ignore them. Now you see why everyone roots for the slasher. They are usually the only person on screen who is acting in a somewhat rational manner.

That wraps up this issue, folks. No, I don’t have anymore, so please don’t bug me to find out who finally survived or if the mystery was ever cleared up. I don’t want to do wikipedia’s job.