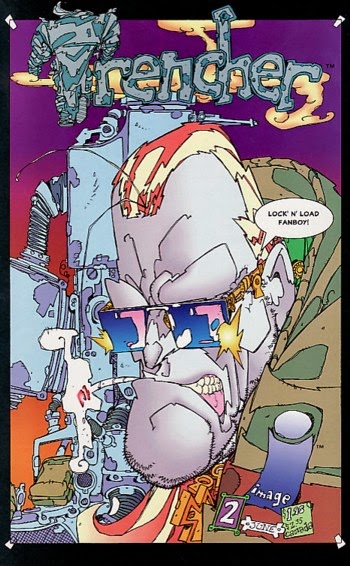 The “magic eye puzzle” of comics

I’ve had a soft spot for Keith Giffen for quite some time now. I’ll admit that I didn’t get into his books until after he started his run on Justice League in 1987, but I quickly picked up all his Ambush Bug stories, Video Jack and even some of his work on LSH and Jonah Hex. No one can argue that he isn’t a talented writer/artist. Some of my fondest comic memories now and in the past I owe to Giffen. From his plotting of the best, funniest and most human Justice League to his recent translation of the Battle Royale manga, Giffen’s writing doesn’t fail to impress. His art was always “quirky”, with flattened, abstracted images being hemmed in by very ordered, almost regimented boarders. But his style was always understandable and brought a certain flavor to book, much like contemporary Bill Sienkiewicz.

Trencher puts all that Giffen goodwill to the ultimate test. Here is a title where the art makes it so difficult to distinguish what’s going on that you spend minutes going over each panel individually. Maybe it’s not totally Keith’s fault. Giffen supposedly did this series relying on ink instead of pencils. This gives each image a very definite bold edge that looks a bit like they all came out of a kid’s coloring book. But you add to that Lovern Kindzierski’s ambitious color palette and you end up with panels that look like the inside of food processor after it has chopped up someone’s vegetable bin. Let me show you what I’m talking about. Here is page one of issue 2. I’ll give you a hint, there’s two people on this page. 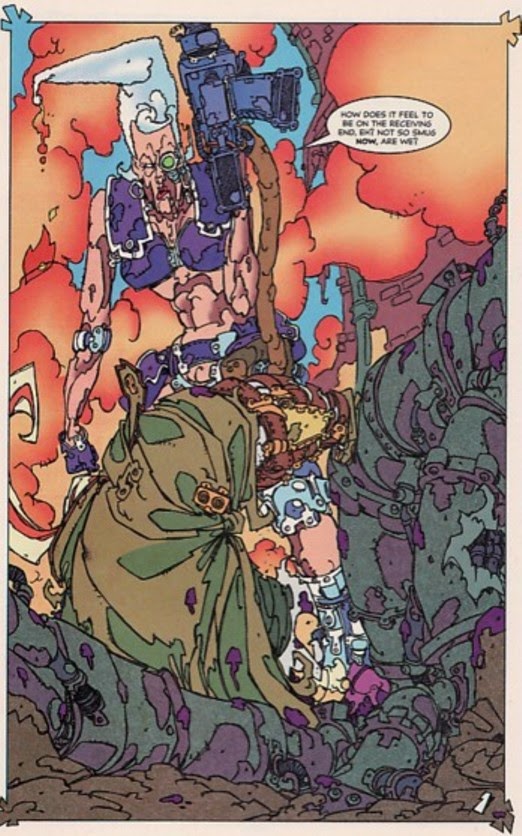 Like some kind of “Where’s Waldo” book gone wrong, every page will have you staring for minutes, possibly hours, in confusion. That’s Trencher’s back/upper torso on the ground in front of the cyber-granny, who’s name happens to be Cher Noble (heh). The book is about Trencher, a bounty hunter of sorts who repossesses errant or misplaced souls. I’m not asking too much at this point as I’ve gotten a slight headache from the first panel. Gideon Trecher’s body will regenerate from any injury, usually within 24 hours. He is assisted in his mission by Phoebe, who maintains radio contact with him and tells him who to go after. She’s never shown. Not quite sure what Phoebe is even after reading the book, but oh well. By the way, as we start the issue. Cher Noble appears to have blown off Trencher’s left arm and his body below the midsection. Trencher doesn’t seem too impressed. 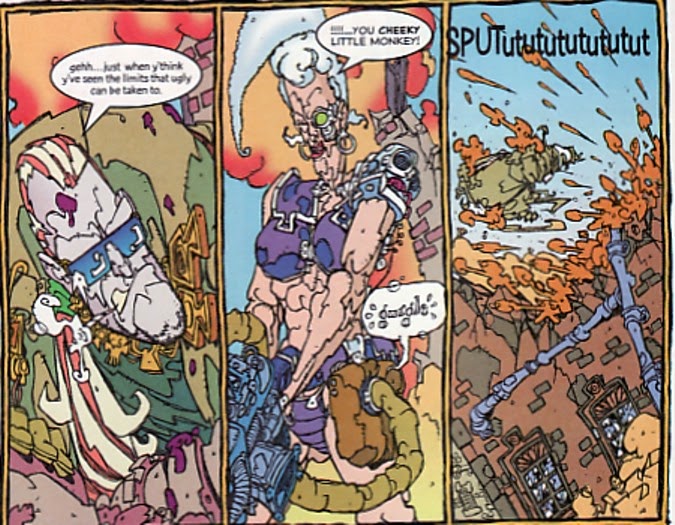 Trencher, I’m beginning to feel the same way. It’s like staring into the toilet after you’ve thrown up. All the mashed up colors swirling together… eww. Anyway the story is that Cher Noble’s soul needs to move on from this Earth and Trencher’s trying to help that process. Cher gets the best of him and looking like a reject terminator, pursues him to administer the coup de grace. Trencher decides to beat feet and commanders a car. After much staring, I deciphered that this book is very gore heavy. 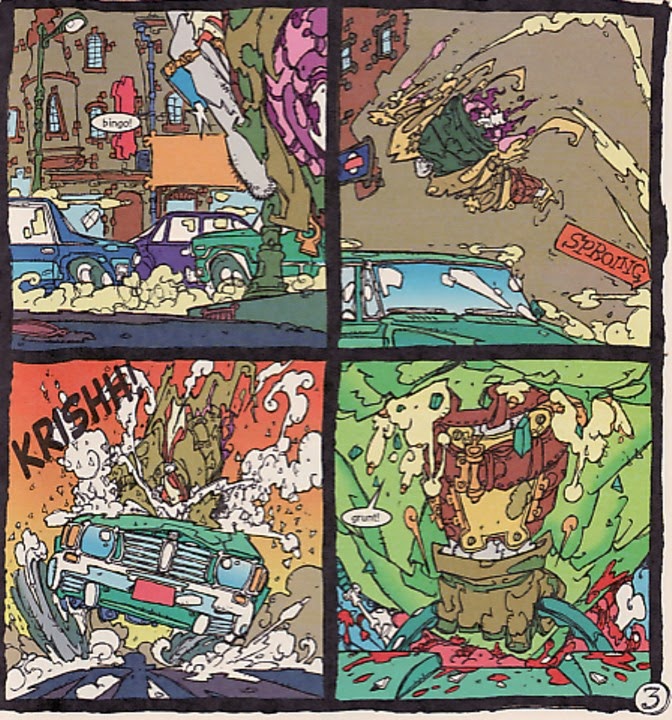 Yeah, that’s some poor innocent Trencher just squashed while making his getaway. So he fits the anti-hero mold Giffen perfected when he created Lobo. Granny keeps pace with him and some how Trencher gets her trapped on a exploding truck or a truck blows up and falls off an overpass or flys up in the air and crashes on her inside a shopping mall or … heck I can’t make out what’s going on in these panels. I haven’t had this big a headache since last New Year's Day. 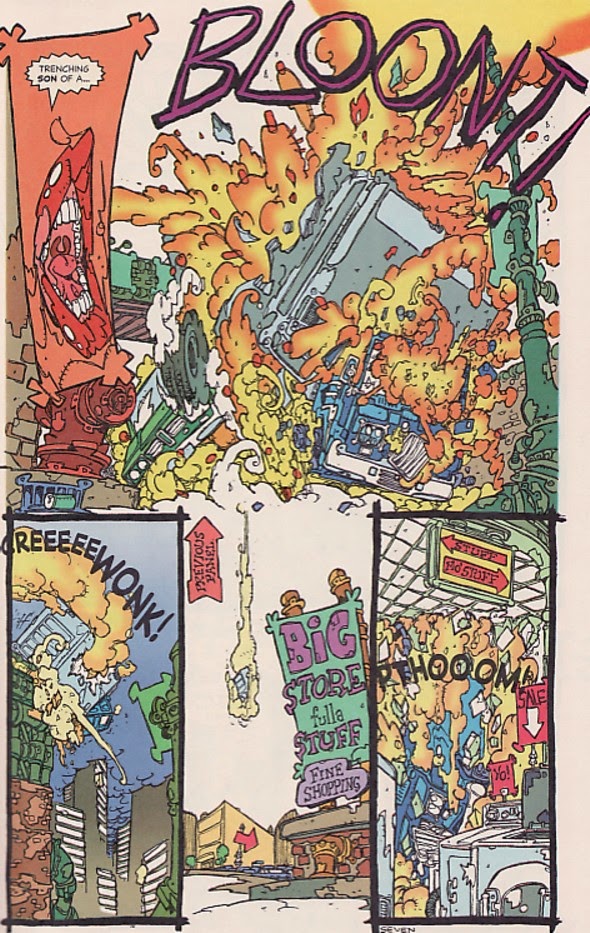 Anyway, Cher Noble ends up with her brains hanging out of her head, so Trencher dashes them on the pavement to do her in. The cops are coming so Phoebe recommends that Trencher “play dead” while the chassis (his body) regenerates. Trencher wakes 23 hours later and busts out of the morgue.

If you can’t make out from the scan, the sign on his crotch says “Sorry Gals”. Giffen still has a wonderful sense of humor. His next few pages prove that he’s not afraid of developing distinctive bad guys either. Most writers would stop themselves before unleashing a supervillain with the power of…well, you’ll see for yourself in a few minutes. First though Phoebe sends Trencher to Arizona to assist the next soul in need of travel planning. Once he arrives, he finds his quarry already taken care of, but not before he crosses paths with the insane dude who did him in. Ready yourself for “The Hurler.” 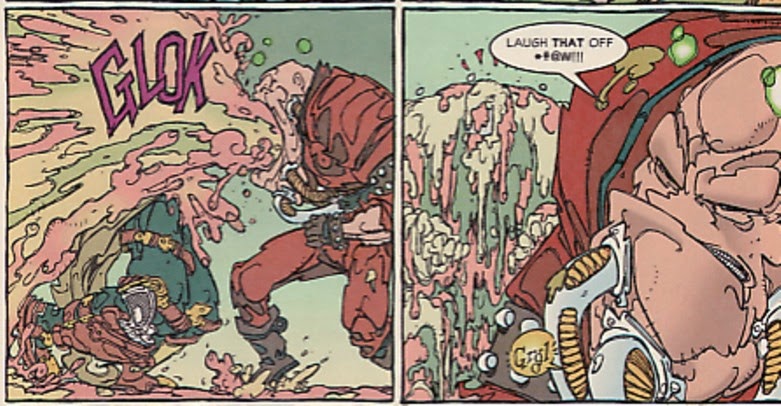 Yes, a villain with the power of projectile vomit. That’s the kind of idea you don’t see thrown around a lot these days. Mainly because most comic writers are older than twelve. Trencher tosses him out of the bar and into the street. The Hurler takes Trencher’s act a bit personally.

Using his awesome power of puke, the Hurler destroys the building Trencher is standing in. Trencher emerges unscathed and smacks the Hurler down after some artful dodging of throw up. Just as Trencher is about to leave, an emerald armored superhero shows up spouting gibberish about how Hurler had rights even if he was a menace and Trencher should have left him be. He gets the smackdown treatment too. But the issue ends in a pull back from the action as another party has taken an interest in Trencher’s activities. 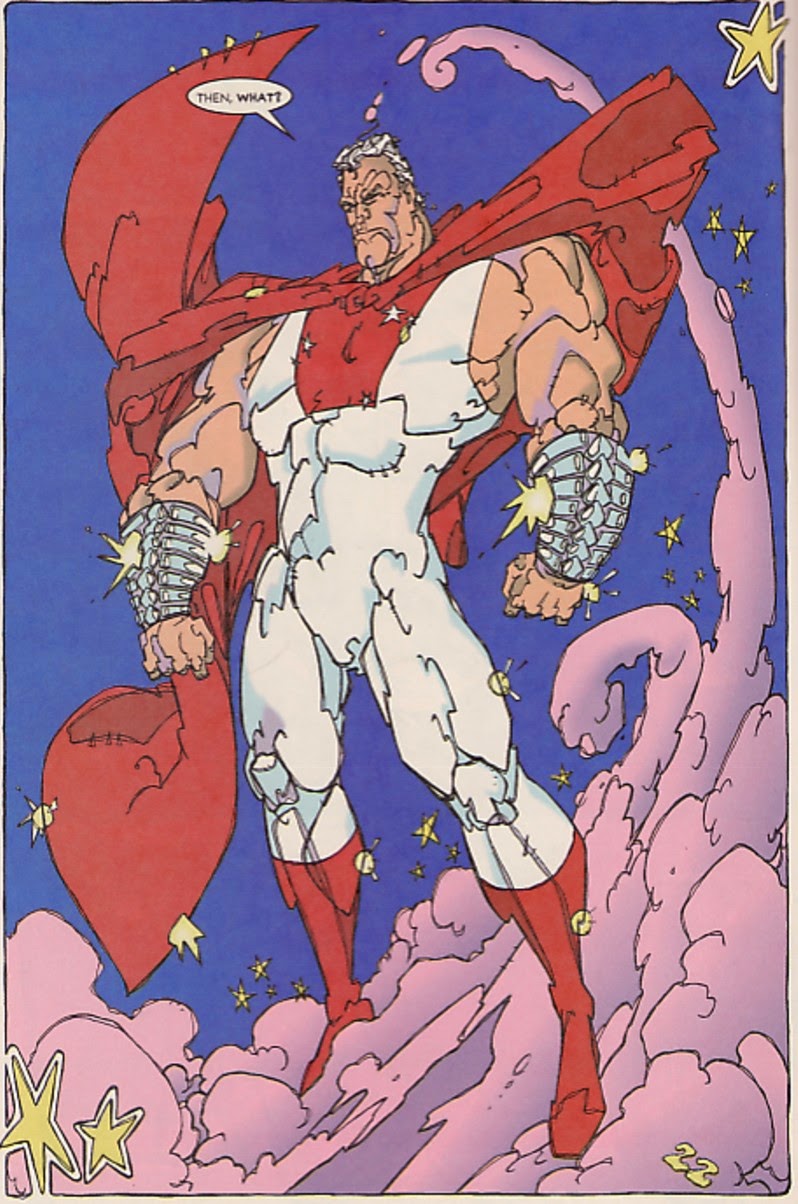 Yes, that is Supreme being given the Giffen “Trencher” treatment. Beside the hard to interpret art, I’m intrigued by what Giffen would do with Liefield’s Superman stand-in. Alan Moore did a great deal with him and Giffen might have tons of leftover Supes stuff from when he did JL (Keith couldn’t use the man of steel for it due to the Byrne reboot). Sadly, I don’t have issue three.
Posted by SonOfCthulhu at 12:00 AM