Some random Wonder Woman books, Part 17
We are back to "punching things together" 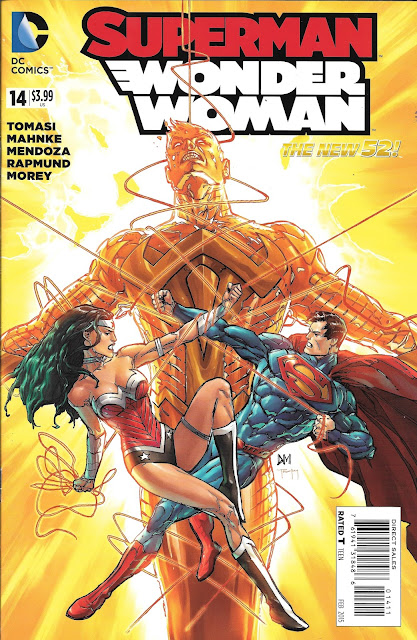 And that's all for the best

So seldom does the Crapbox get two issues in a row, that when it does happen it seems like the Gods have smiled on us.

Or in this case, the Gods are having a big laugh at our expense. We concluded yesterday's article with Superman and his unlikely love interest Wonder Woman having been saved by a new, unknown hero. 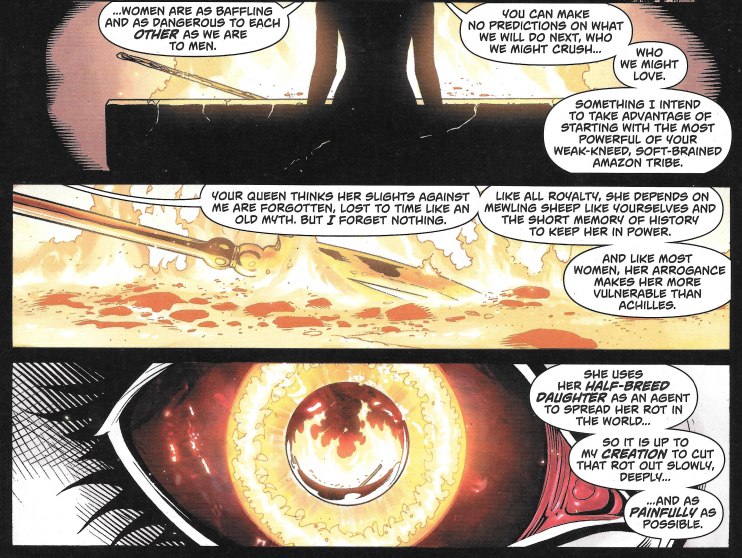 We begin this issue with a God, possibly Olympian judging by those columns in the panel, who appears to have a beef with women in general (even though they are one, apparently) and Wonder Woman in particular. This is our Arch-Enemy of this story arc, and the writer is still keeping who this is under wraps. That spear thing she dips into the molten lava looks to be a clue as to what she has planned, however.

But back we must go to the very unconvincing couple and their savior of the evening: "Wonderstar." 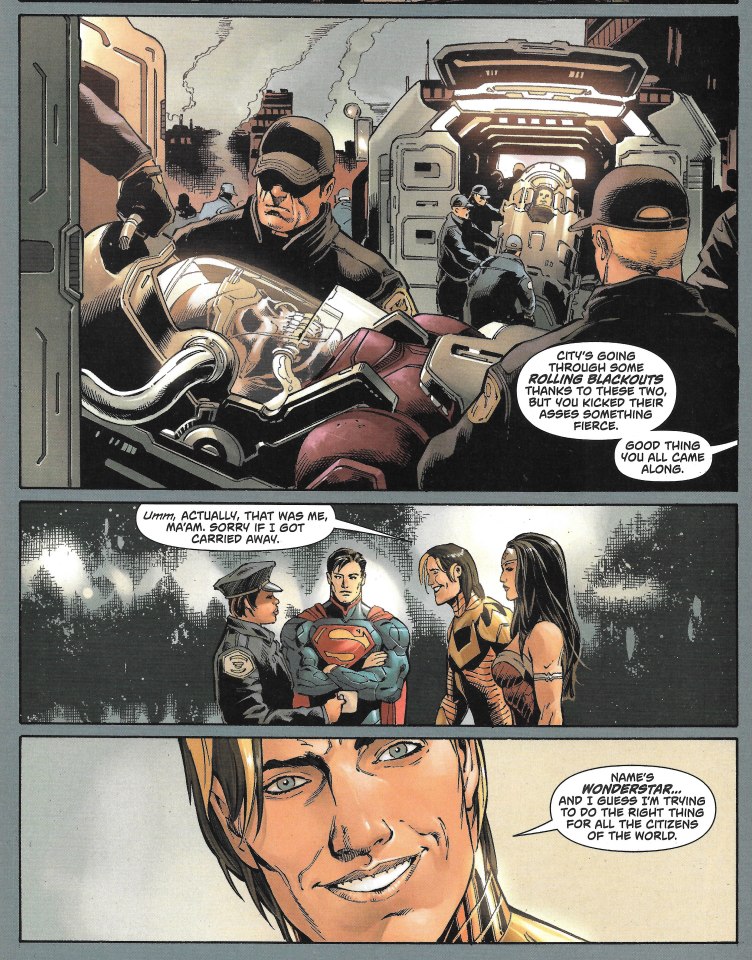 With the bad guys knocked out, Wonder Woman and Superman decide to have a chat with their new friend Wondy. He is ecstatic since they are his favorite superheroes and he wants to be trained by them by his own admission. 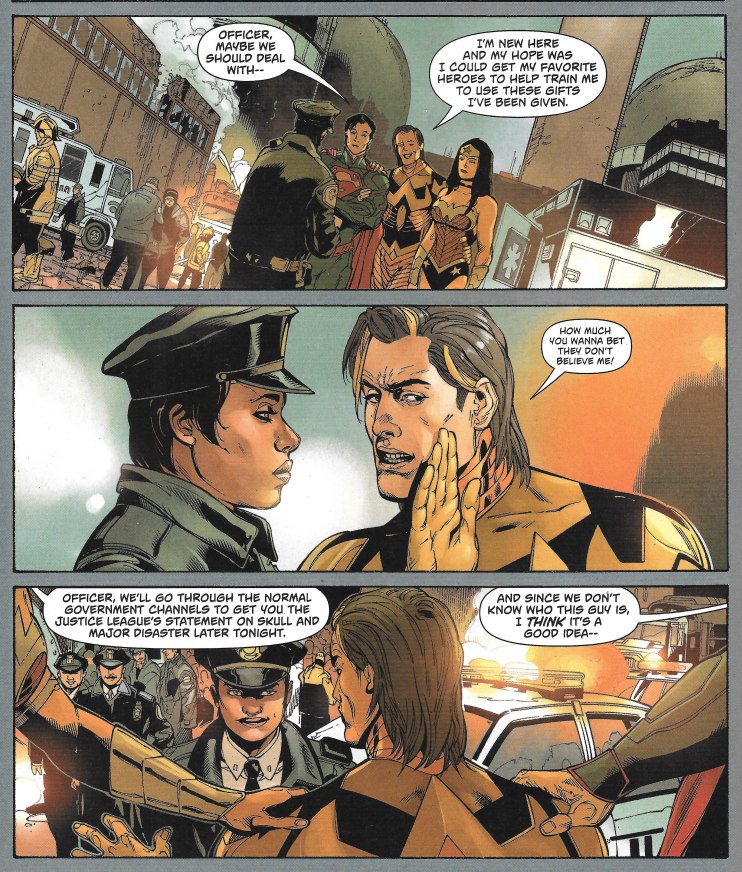 This part kind of works. The part here where we have the pair as Teammates. Because that's where I've always seen them, working together for the betterment of all mankind. Not getting mad because one of them is too kind to strangers or upset because they aren't getting dressed on time (uh, you both have superspeed. How long could it REALLY take?). 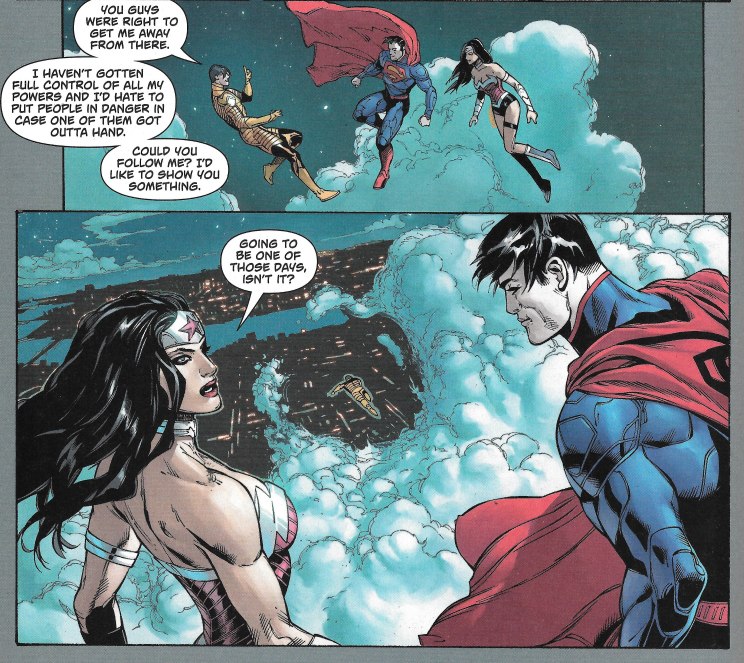 Anyway, Wonderstar shows them the literal rock he crawled out from under, and of course he has no memory of who he is or how he came to be here. Then suddenly there's an emergency and off he flies. 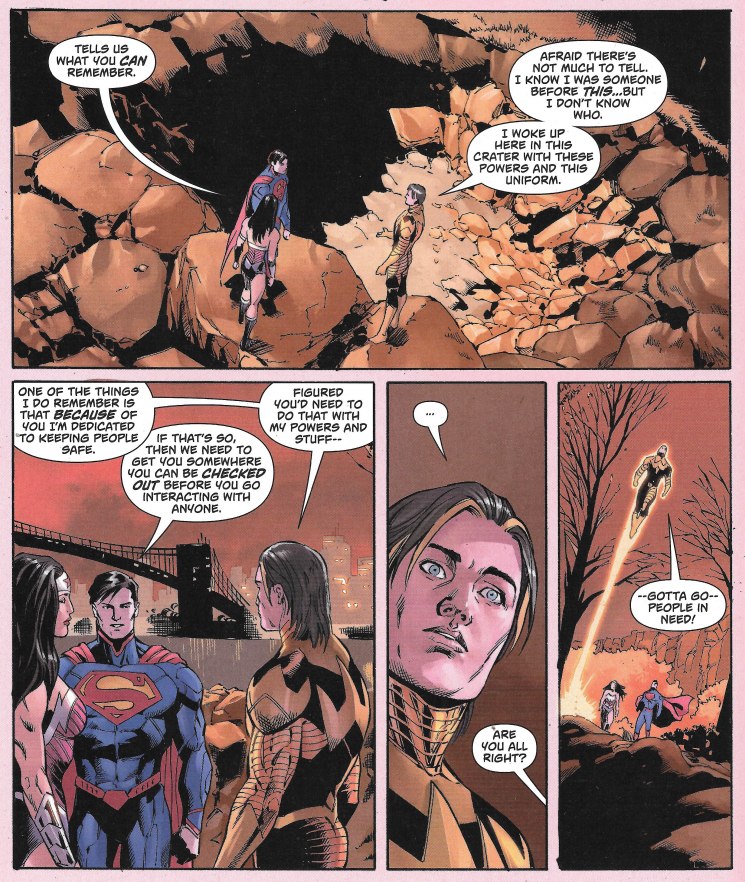 …and Wonder Woman and Superman join him to check out how he does / keep him out of trouble. 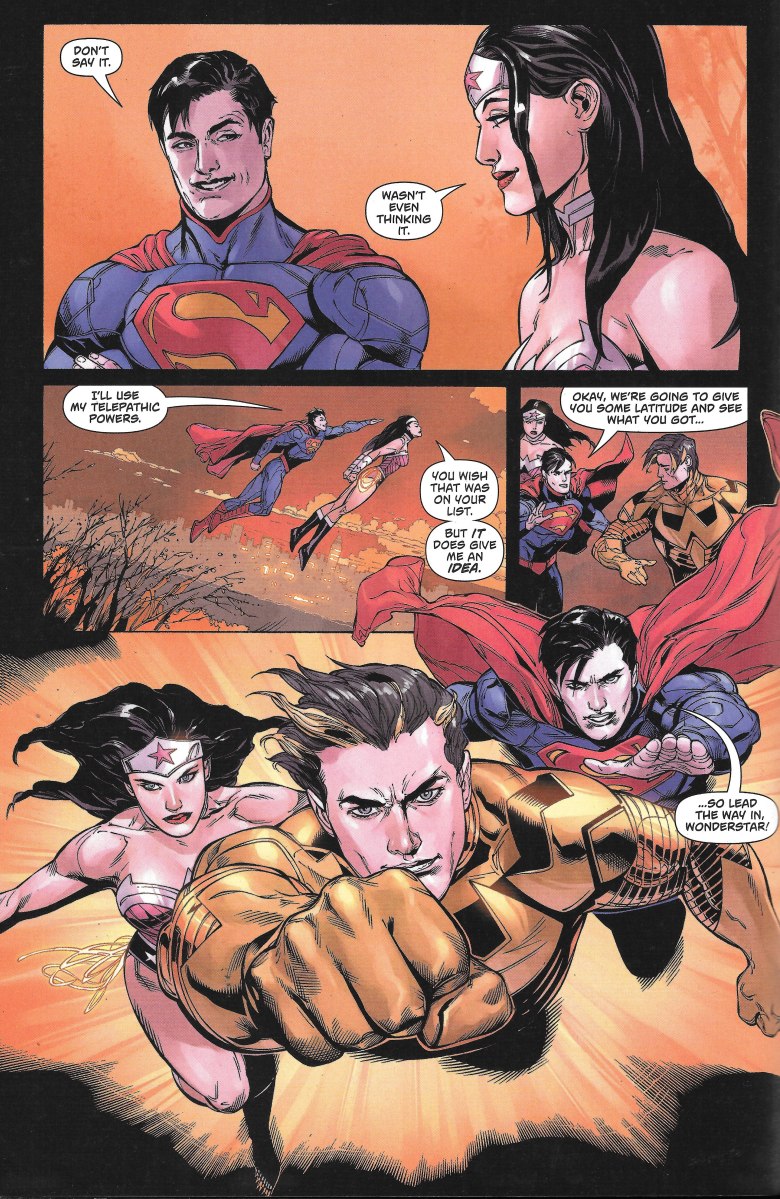 And because the writer can't come up with great villains, we end up with three tanks: Mammoth (who I have to admit made me grin in panel one), Debutante, and Crash. They are committing a bank robbery, because that isn't cliché or anything. 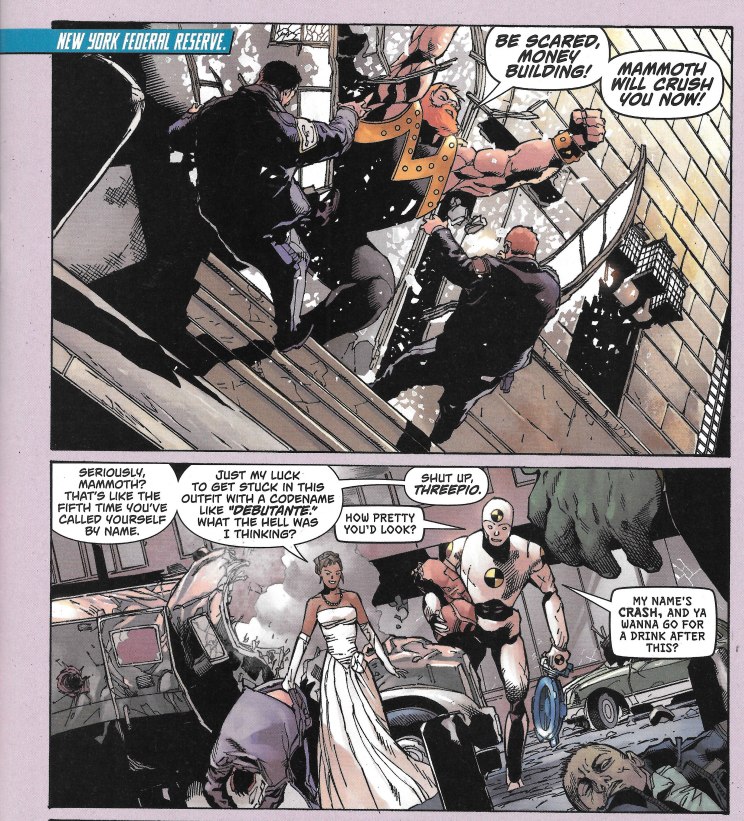 As they dump the money into a portable hole that might disintegrate the money for all they know, the heroes arrive and kick all their butts. 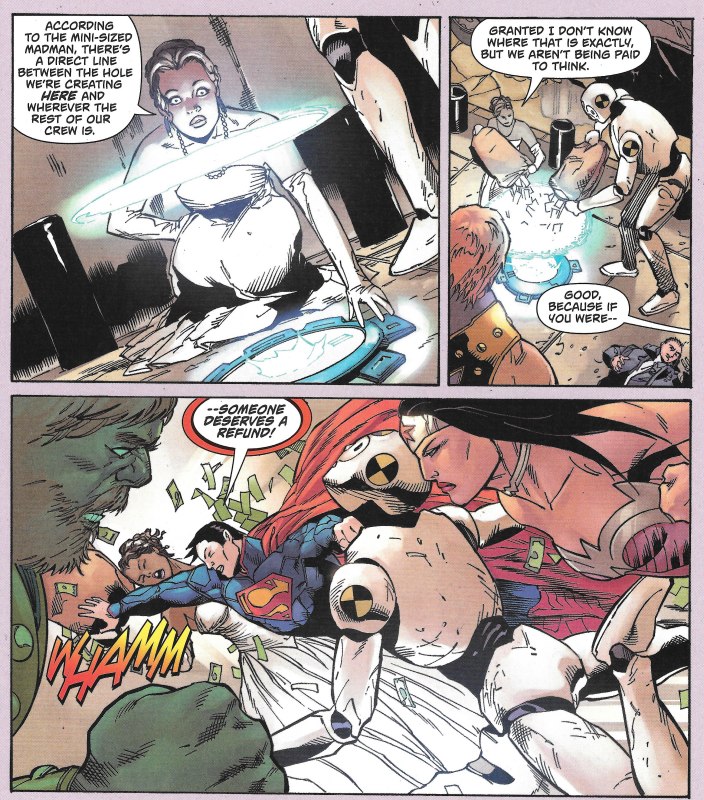 Wonderstar finds out he has laser vision. Or heat vision. Or psionic vision. I don't know, but whatever it is, I'm pretty sure it ISN'T Martian Vision. Maybe. Whatever. 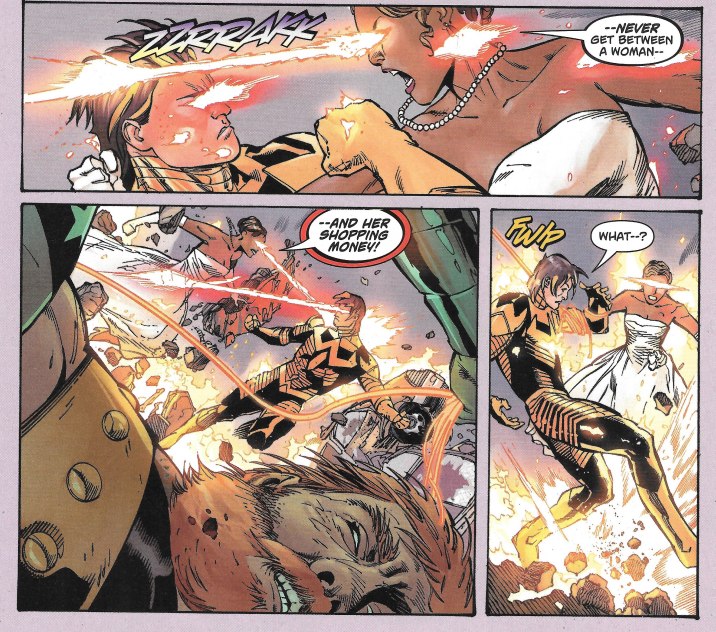 Superman "Crashes" this little party and seems ALMOST like his pre New 52 self here. 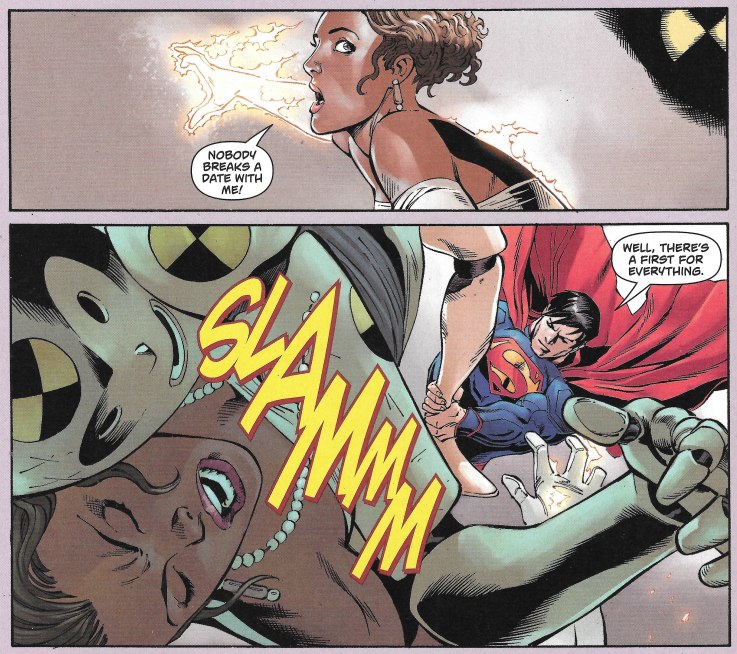 During all this Wonder Woman has to yank Wonderstar out of the way with her lasso, which seems to have allowed her to run a few test questions on him. 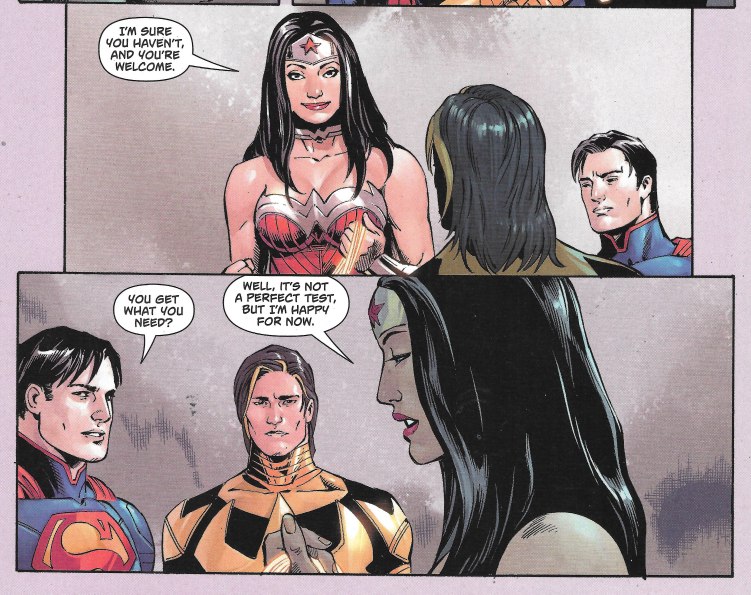 Wonderstar is unfazed by this slightly morally dubious action. In fact, he's rather happy. I suppose there isn't anything wrong with it per-say…but still I'd rather her not make it a habit. 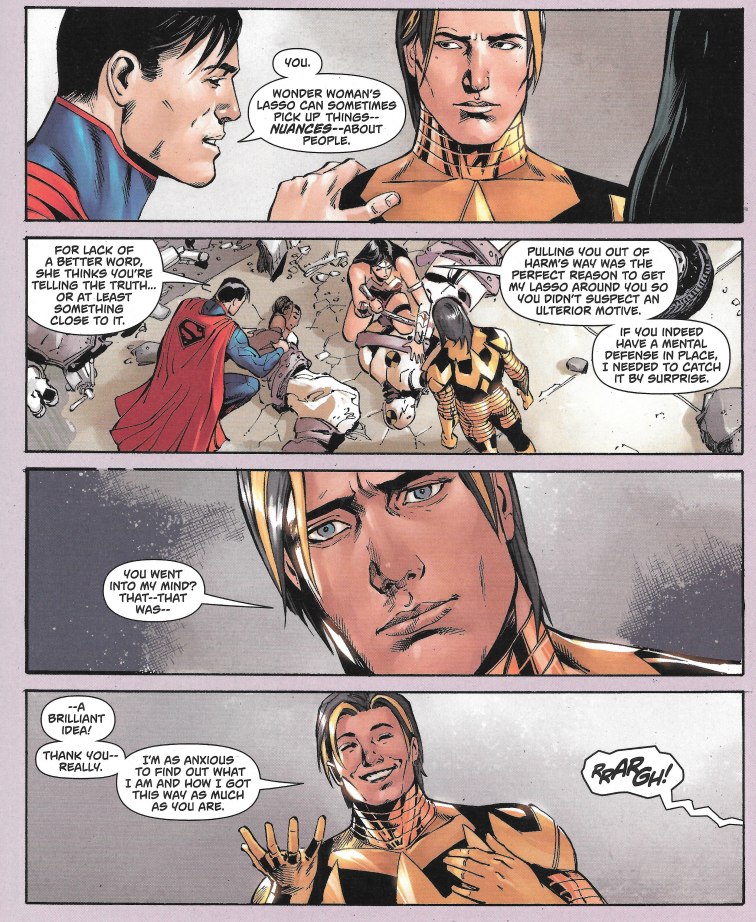 Oh, and that gurgle you hear is Mammoth waking up. 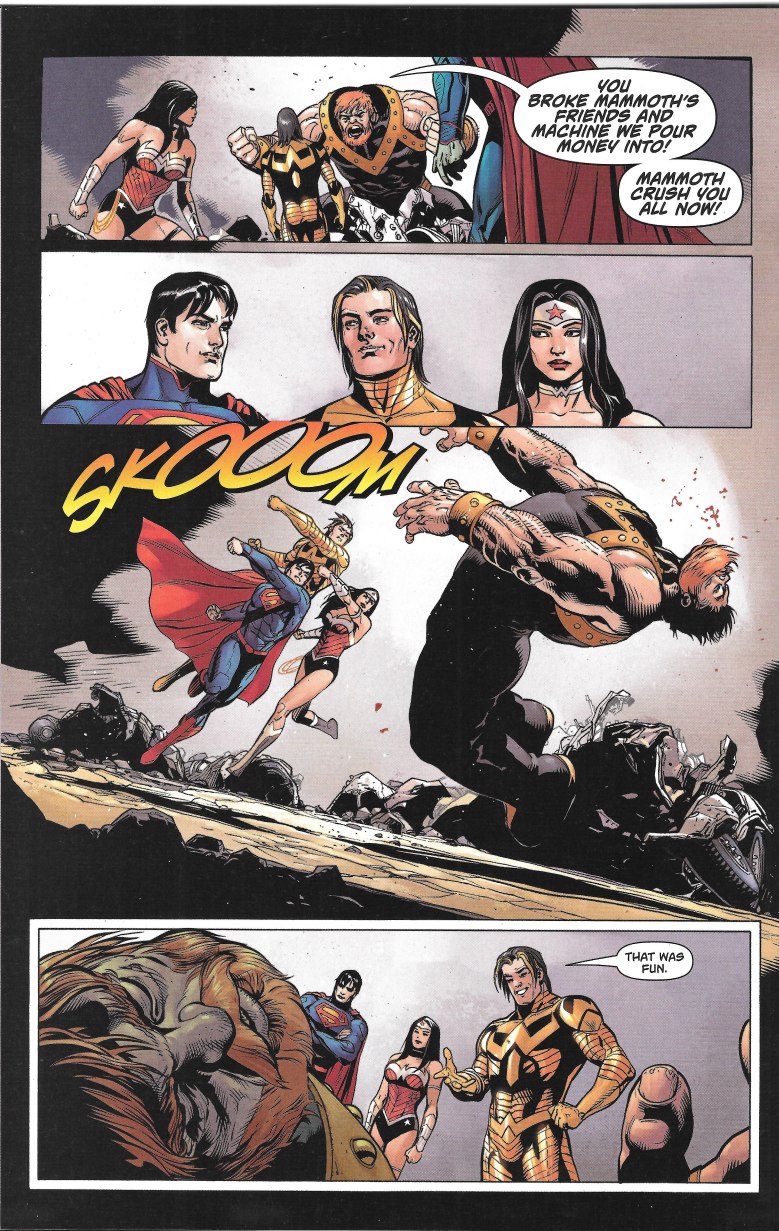 I hate to admit it, but yeah that part kind of was neat. I'm sure our writer just made a mistake by including something entertaining. 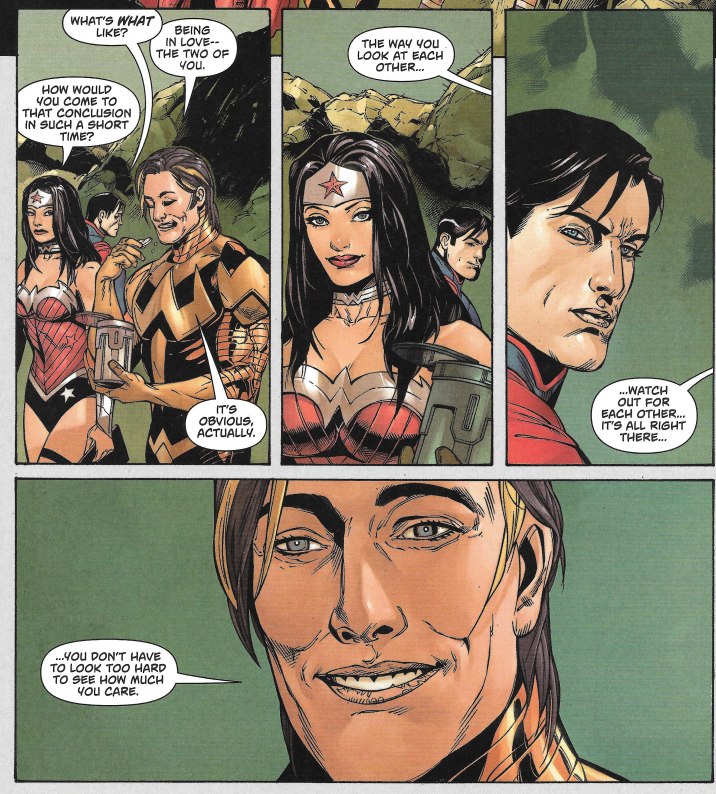 Sure enough on the next page Tomasi has Wonderstar blithering like an idiot about how "in love" the pair are while the creepiness factor comes into the art again. And with so many inkers over Mahnke's pencils, I have no single person to place blame on. 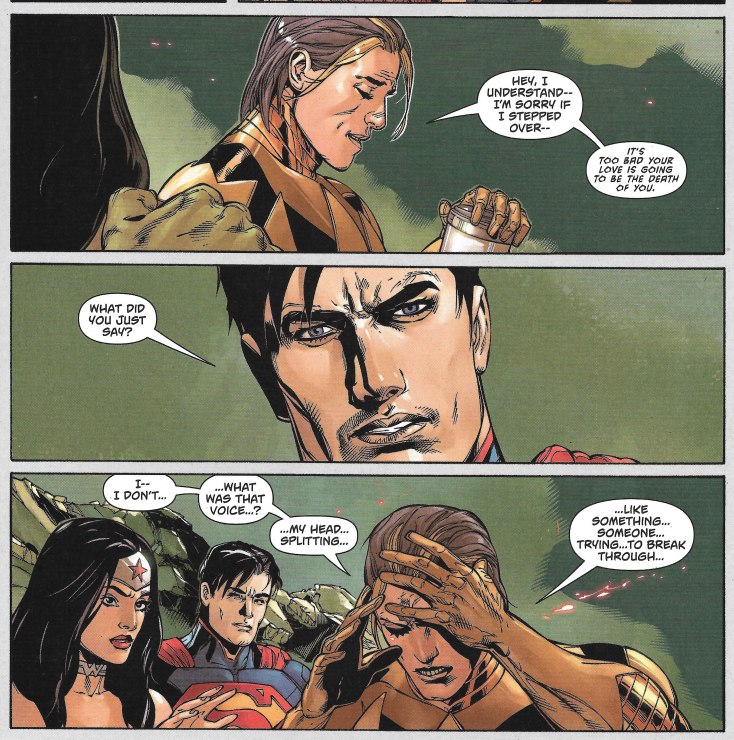 And just like that, Wonderstar begins to lose it. He starts saying things and he convulses and changes… 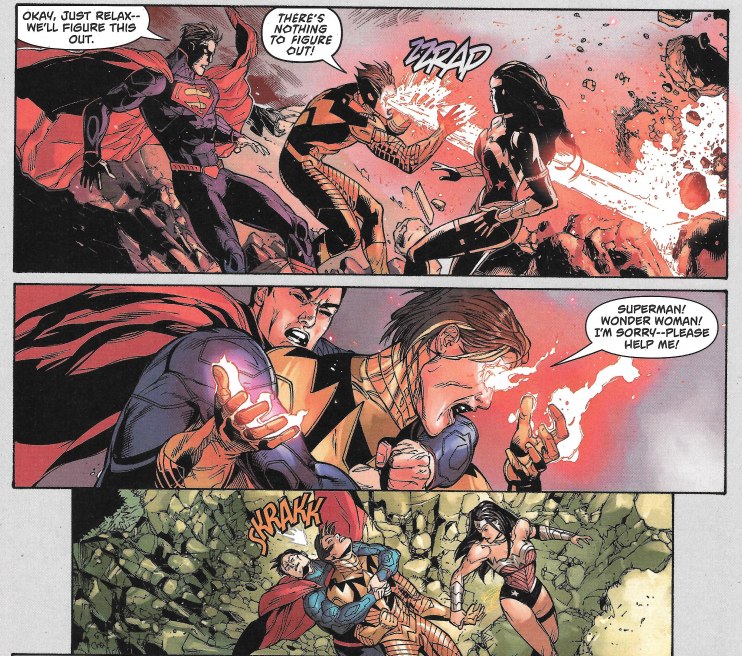 …and his super vision thing goes out of control. Supes grabs him from behind, but can just barely hold him. 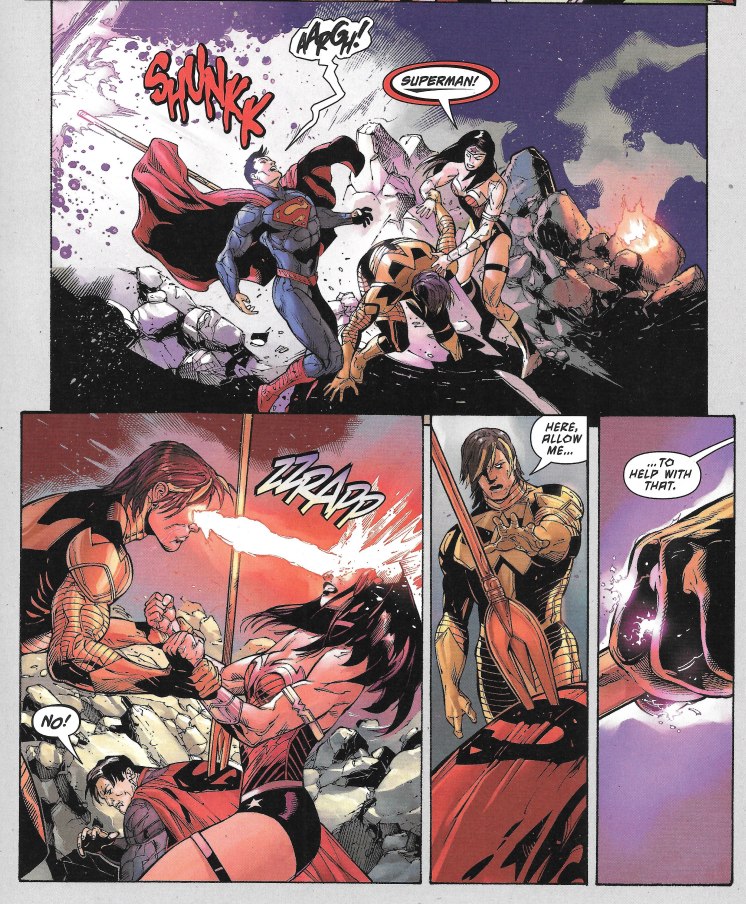 He starts jabbering about remembering when suddenly a spear that looks exactly like the one that started off our issue, gets flung from a glowing pink boom tube thing in such a way that it impales the man of steel.

Wonder Woman takes a face full of super pink vision all the while Wonderstar seems more and more corrupted. He grasps the spear and the deception falls away to reveal… 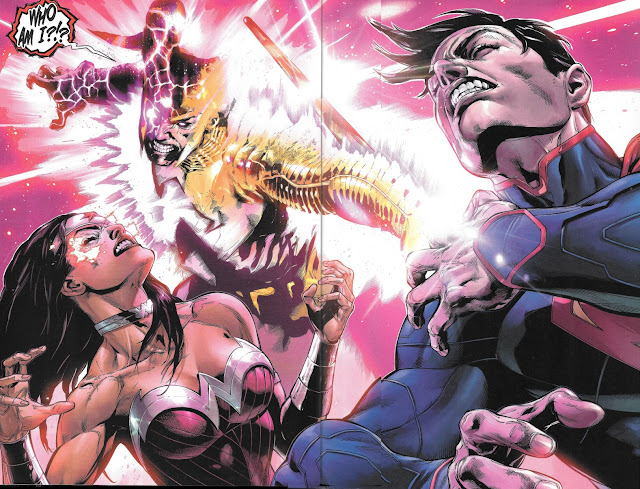 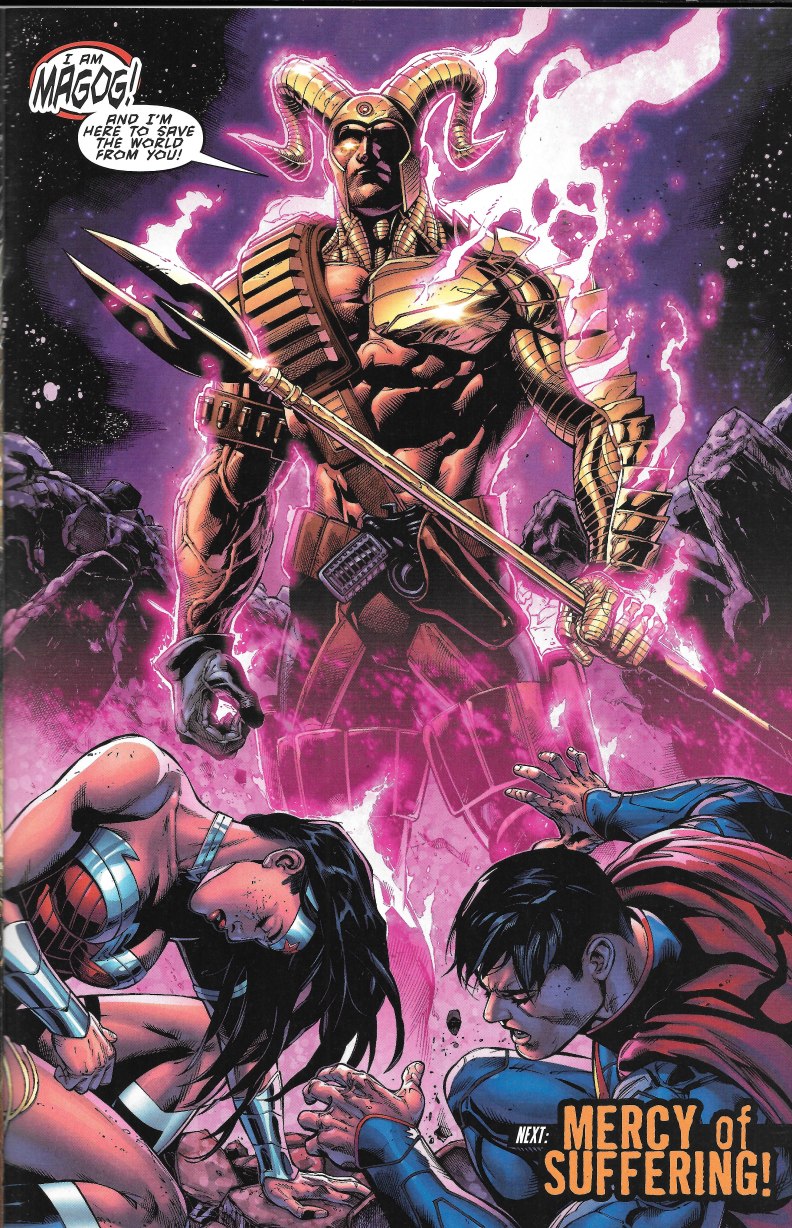 …and one who has killed superheroes before. Magog, a guy I really liked when he was a part of the JSA. No telling how he will end up here in the New 52, but even money is on "most likely dead by the end of next issue."

Wonder Woman is in this and the only reason she fairs better than in issue 13 is she hardly has any speaking parts. Leave it to the Crapbox to spit out back-to-back issues of something this lame.

Posted by SonOfCthulhu at 2:22 AM