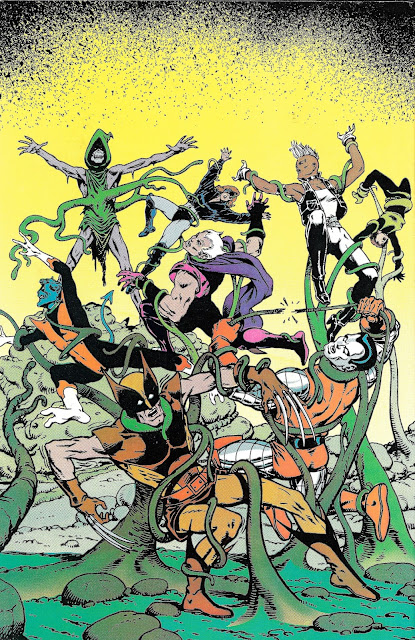 That first part has you guessing who the bad guy was.
This part will have you wishing they had kept it a secret.

In Part One of this review, it became clearer on second read through that so far all of these "plagues" being visited upon the X-Men are of the same nature as what is happening to people in Africa: Depression, guilt, loss of humanity, physical suffering, moral dilemmas regarding governance and self-worth in the face of staggering mortality. While this maybe subtly implied, it is never explicitly stated nor does it factor into the story in a real way. The mystery of WHY this is suddenly happening is explained away in one of the books more awkward sequences and as to how they tie this all to Africa is one of the more bizarre leaps of logic I've yet to see. However, at this point there was at least the germ of the idea in the editors' minds that this would be explained as a clue to the adversary's location. Here we go with how that comes about.
We start with Storm chasing a guy dressed as a ringleader through a Hall of Mirrors that branches out into a circus tent. Whatever the entity is, it has the ability to alter someone's perception of reality. Which includes creating a room full of crème pies. Jo Duffy is scripting this mess of very jarring slapstick while John Bolton does double duty and penciler and inker. It is here that the story really starts to kind of unravel. The implied contradiction contained on these two pages seems to be the frivolity we engage in vs the plights of our fellow humans that we ignore. Storm gets it and like Wolverine, appears to have beaten the entity at its own game. 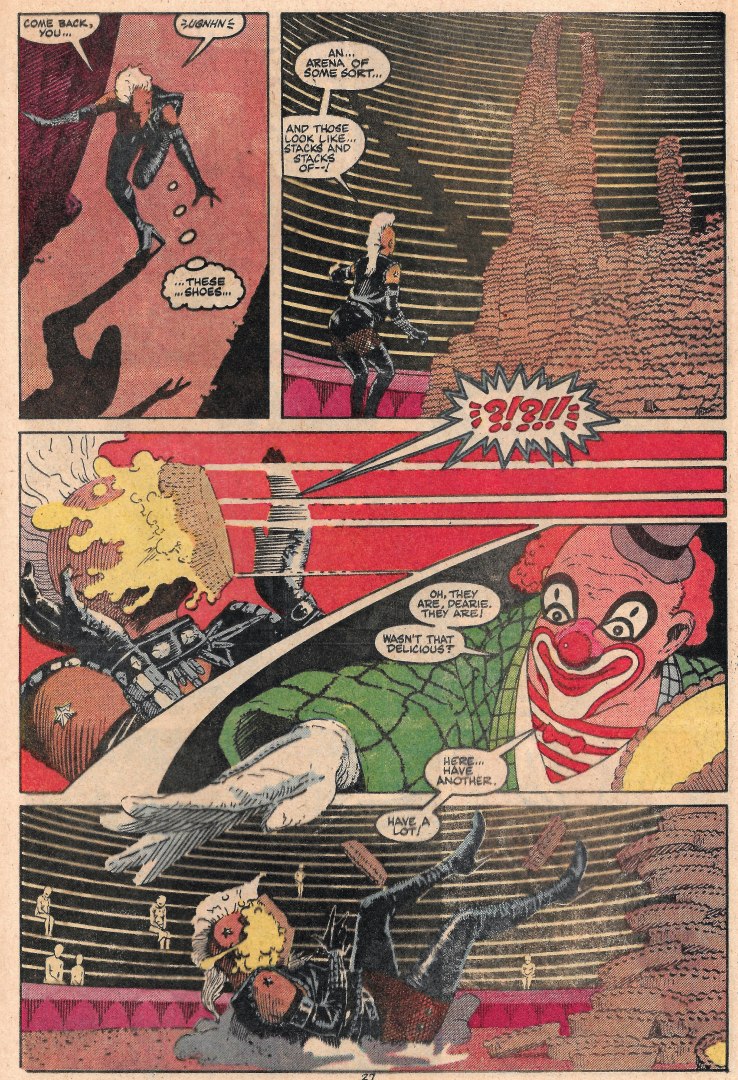 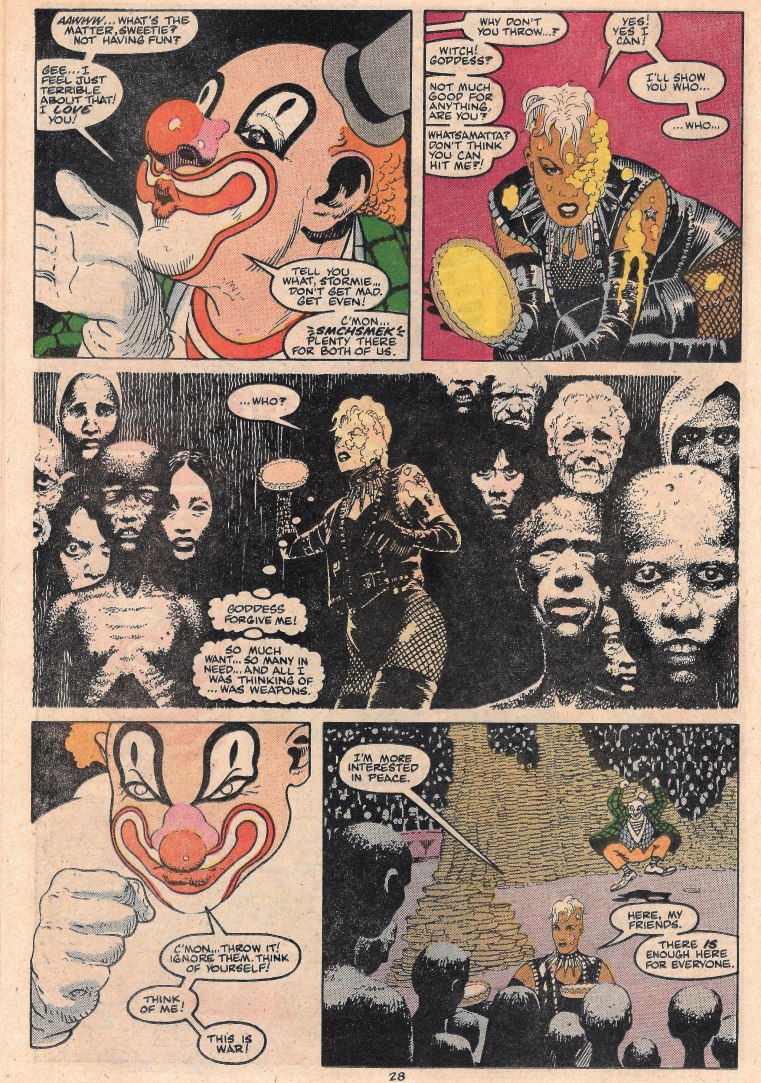 She awakens to all the X-Men knocked out and when she goes to wake them up, they are all depressed. She rallies them and they all follow Rachel, who thinks she is in psychic rapport with the entity. Mike Baron is handling the tricky job of explaining the entity, what it is, what it does, how its powers work and why the X-Men need to travel to Africa to confront it. Sadly in no hands would this wealth of expository info dump sound or flow naturally. Baron gives it his best along with his artist pal and co-creator of Nexus, Steve Rude. Rude's pencils are great for these two pages as are legend Carl Pott's inks. It's upsetting that they weren't given juicer parts to draw. 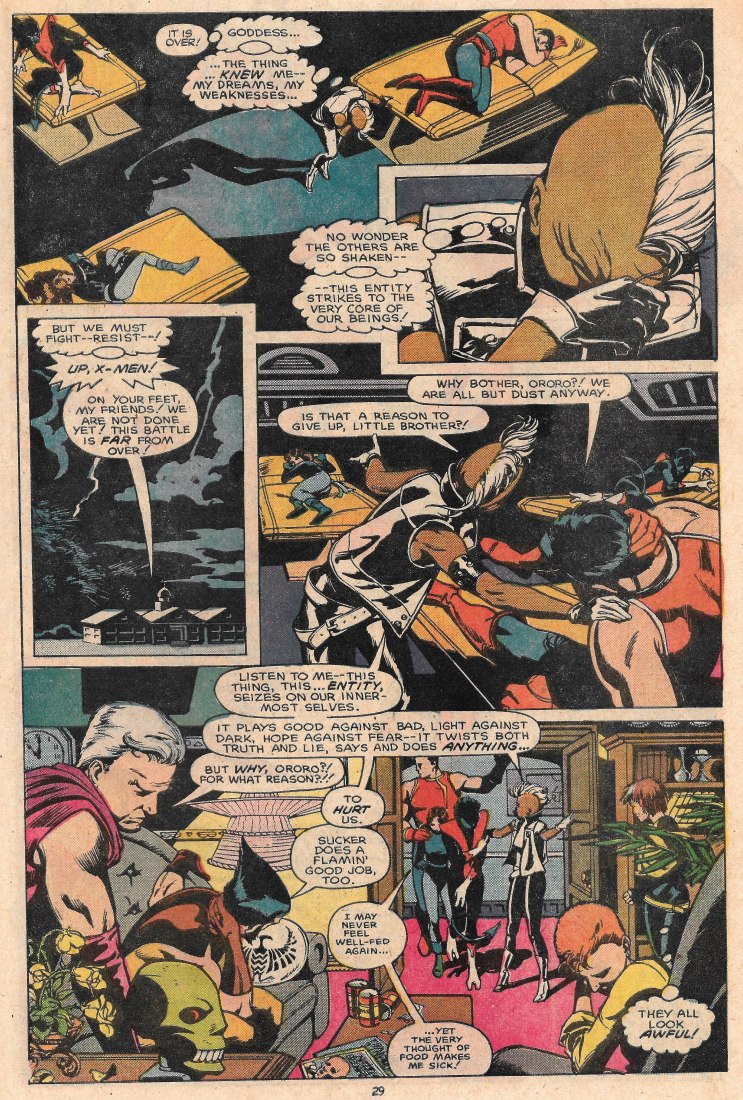 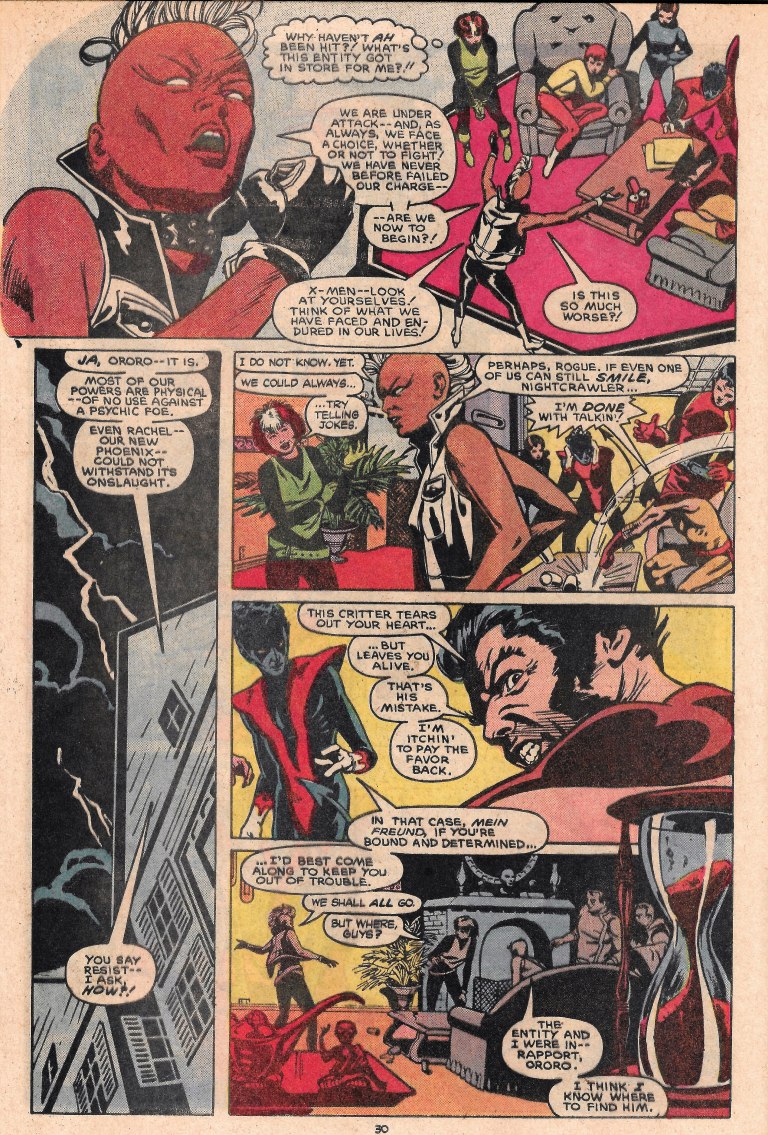 Next we have Denny O'Neil trying his hand at finishing the connection that Baron started that links our antagonist to the plight of the African nations undergoing the famine. I don't feel this really works, actually. It feels very tossed in and it only gets worse. Bret Blevins handles pencils and it is that period in his career right before everyone started to look like pseudo-Elfquest models. I really disliked that phase of his work and I can see it in his work here. Inks are by Al Williamson, who almost finds a way to cover it up. 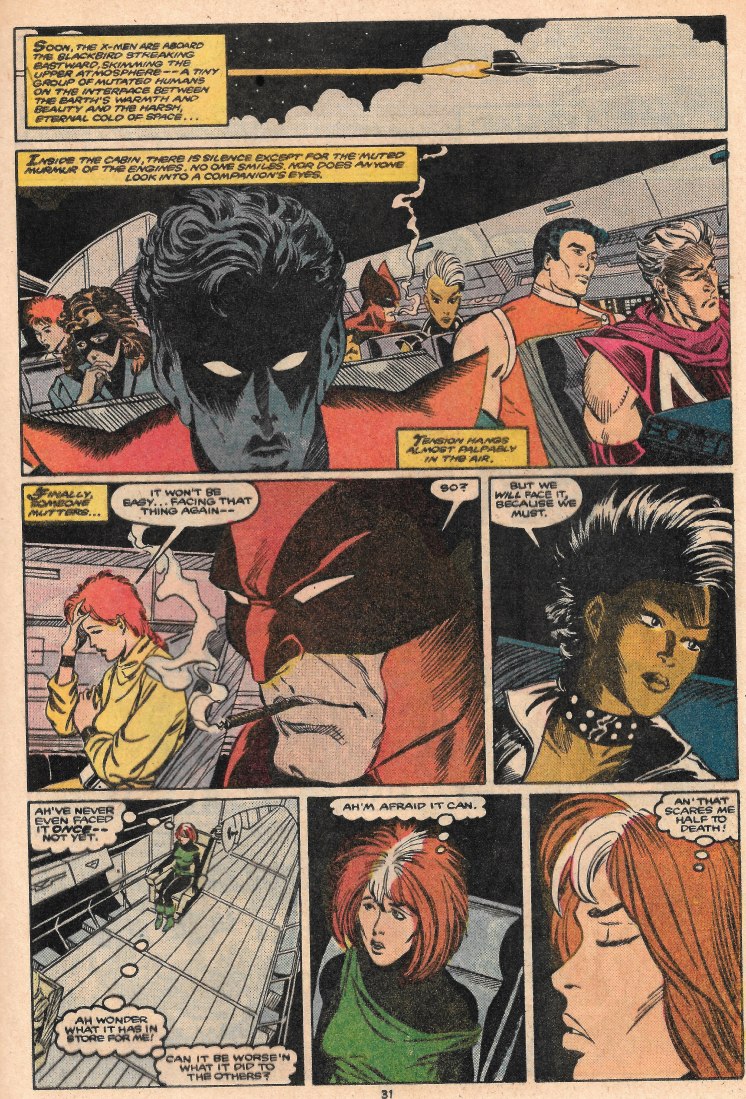 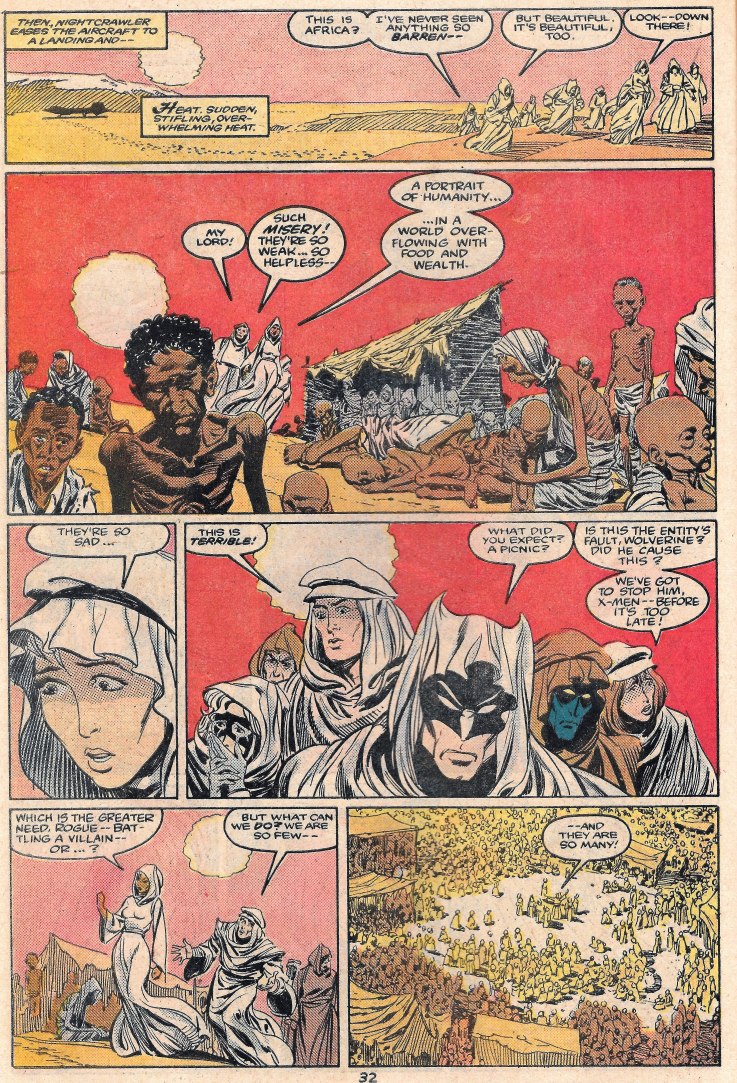 Next up George Martin takes the helm and decides what we need is some action…so he has a plane land and has the crowd rush the props. I don't know. I just don't know. This sounds like the least likely thing that would happen, but this is what we get to watch, X-Men saving people who are Darwining themselves into the plane's propellers. Art is by old-schooler Herb Trimpe with Sal Buscema inking that stuff up. They leave us with the X-Men little more than cargo handlers. 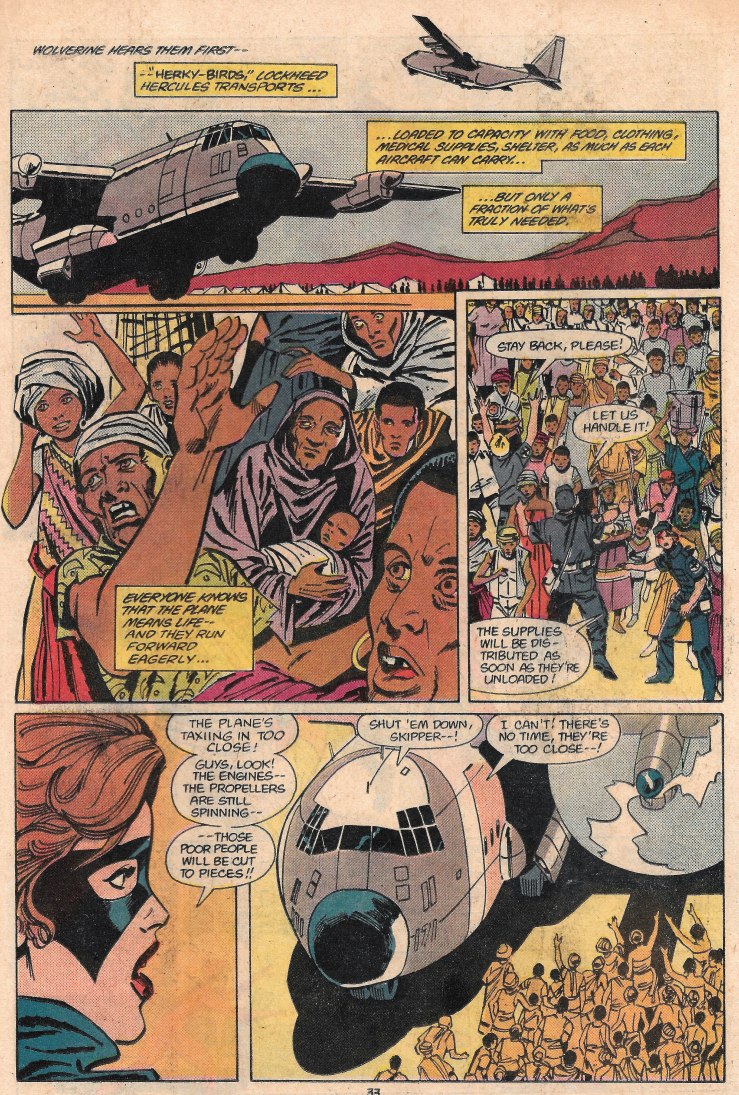 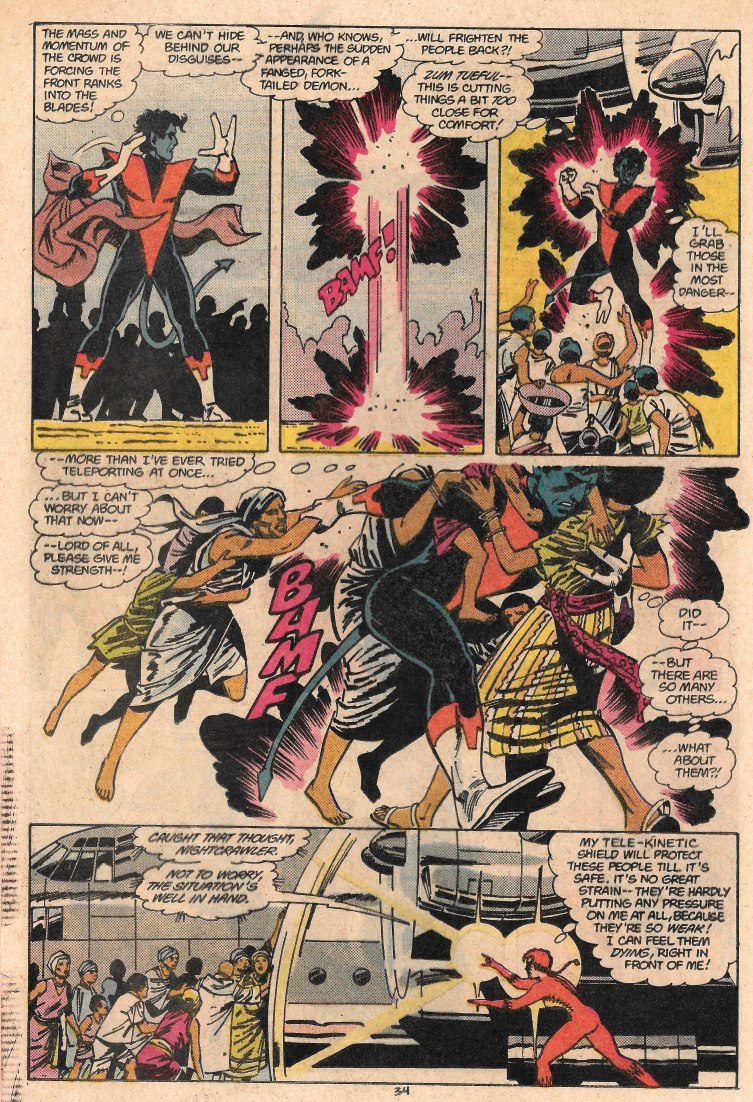 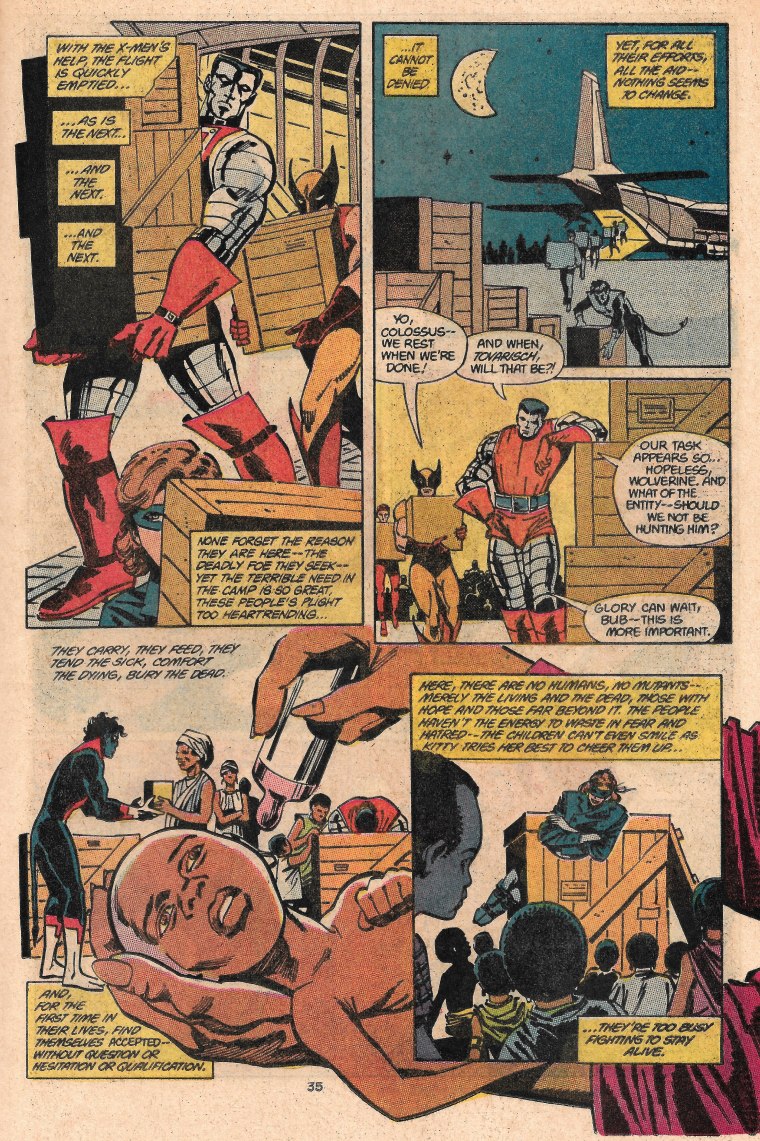 Bruce Jones steps in write and finally Rogue gets the spotlight for two pages. She does something that Rogue nearly never does, steals all her teammates' powers to take on the entity single-handedly. Last time she pulled this trick in the comic continuity was against Nimrod. Gray Morrow does pencils and inks, and after seeing his work now in this and the DC Heroes Against Hunger books, I must say I'm not really a fan. Maybe it is just these books? 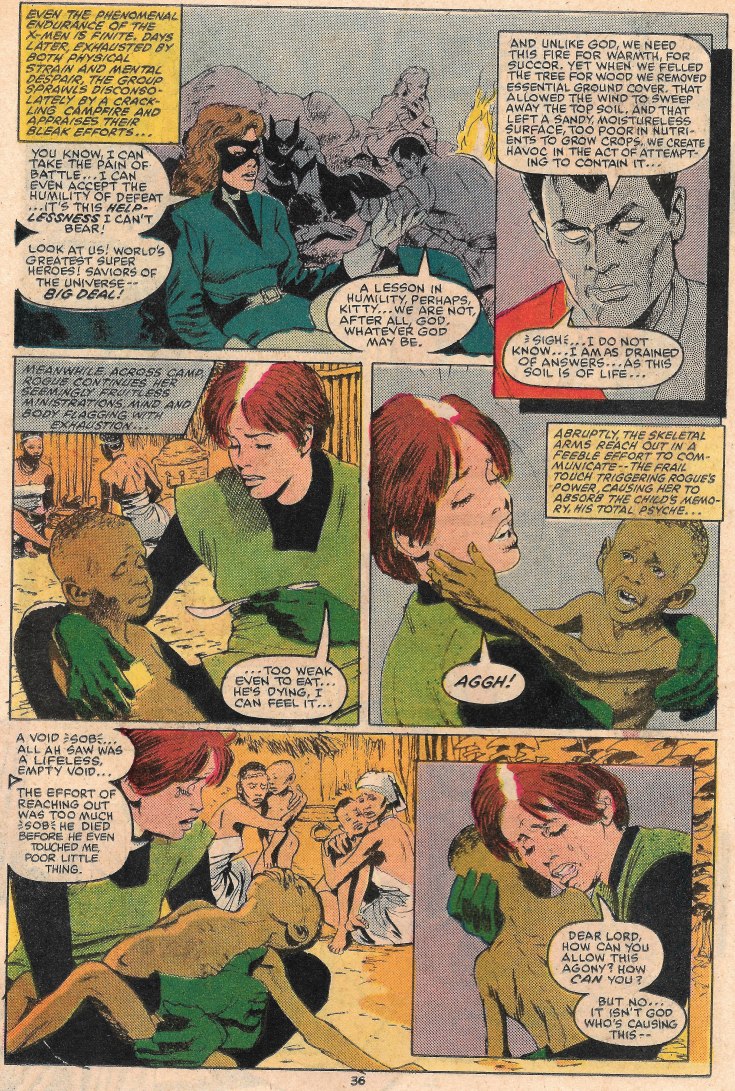 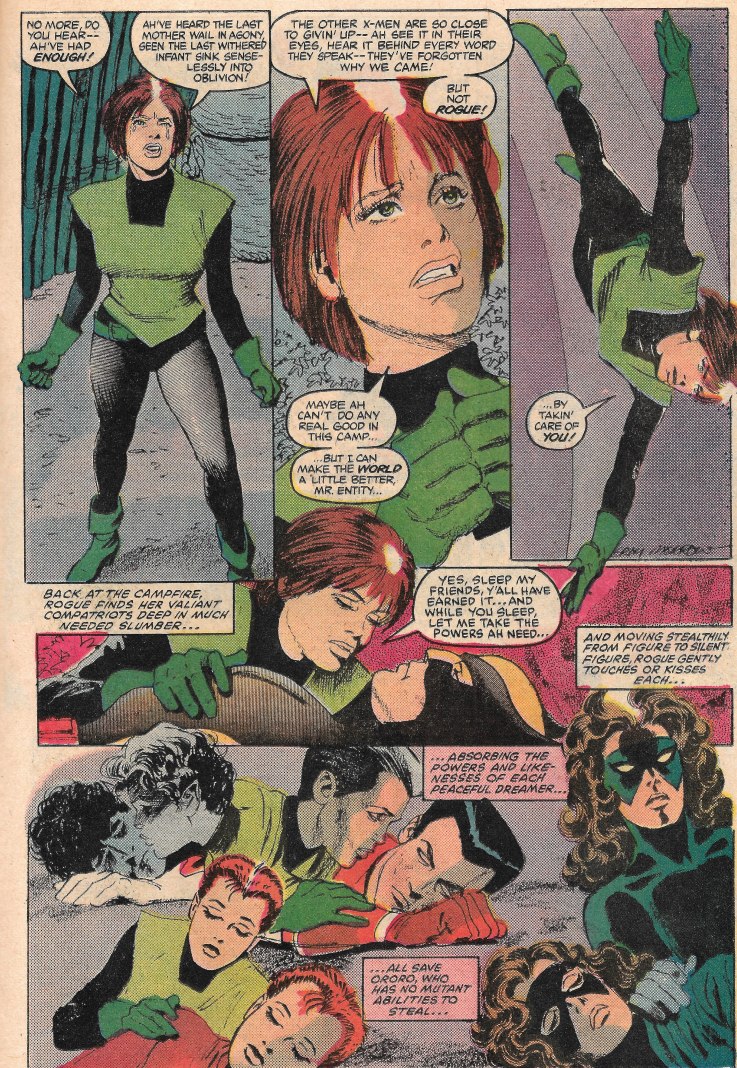 So now we have Rogue flying off looking like every character the 90's would produce only with less pouches to confront the entity in its pyramid home. Oh, and Storm wakes up because she had no powers at this point in the comics, so Rogue didn't knock her out. The creature reveals itself and it is…*surprise* a humanoid, tentacle lizard monster! Because nothing says depression like a lizard monster. You know at least in the DC book we got to see the alien-robot thing in the beginning. You knew where that book was headed. This is kinda really out there. I will say that with art chores are done by Paul Gulacy and Bob Layton, that at least we get a good lizard monster. Writing this mess is Steve Englehart, who should really know better. 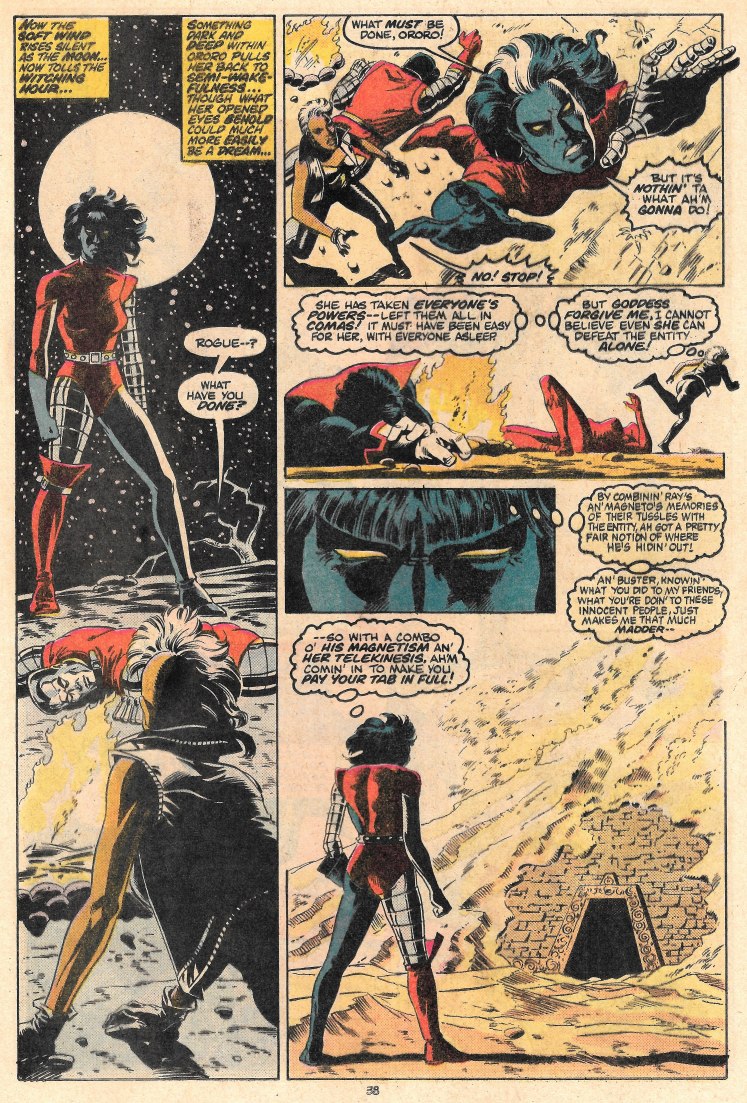 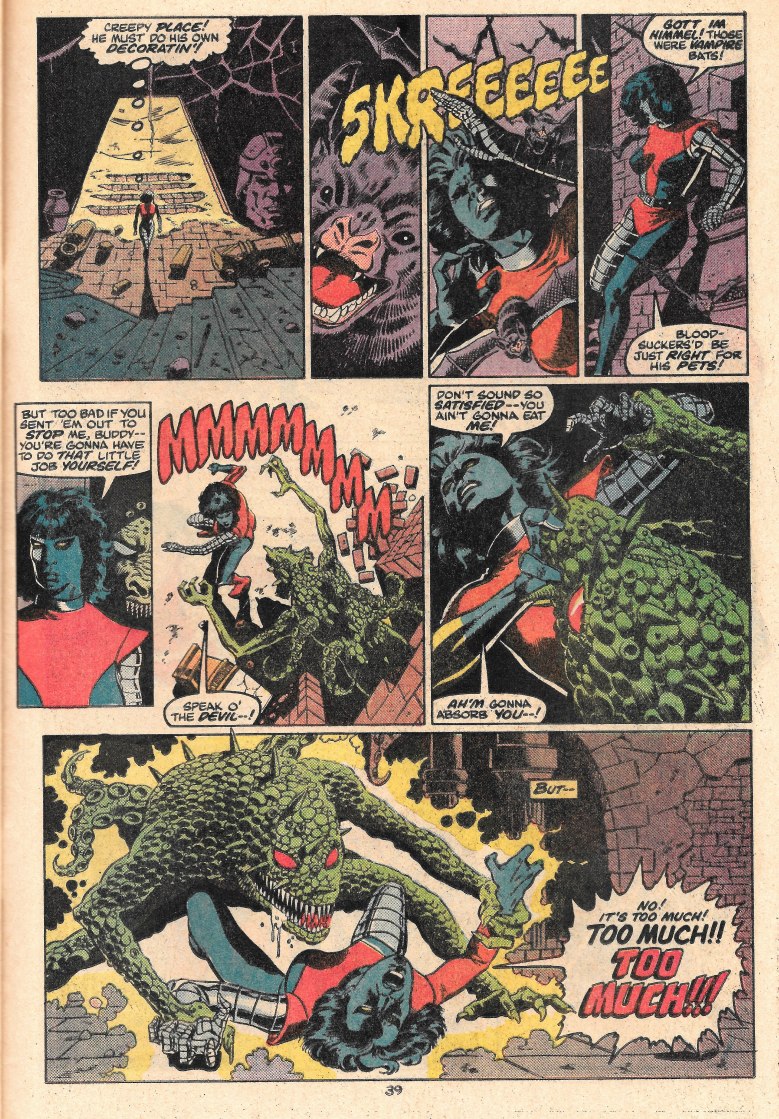 Jim Shooter steps in to try to make things better by having the lizard monster disappear when it possesses Rogue. It chases Storm around and they trade banter for a bit…then we see Alan Weiss's pencils and Joe Rubinstein's inks give Storm a rather odd look near the end of page two and… 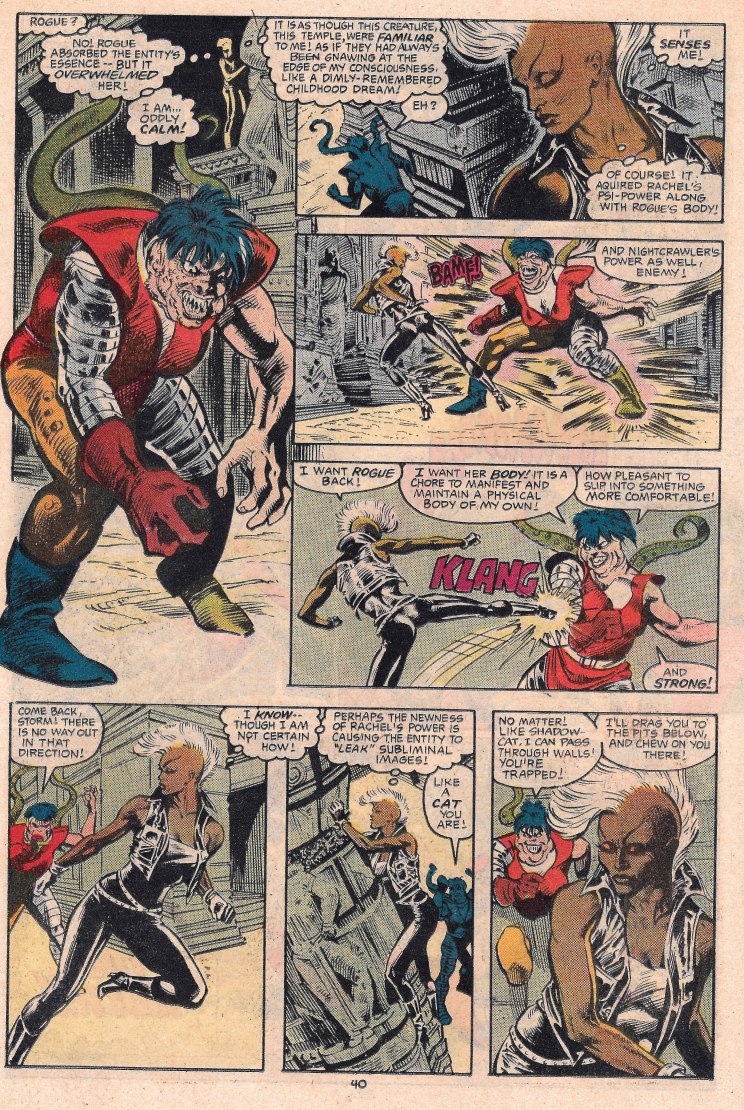 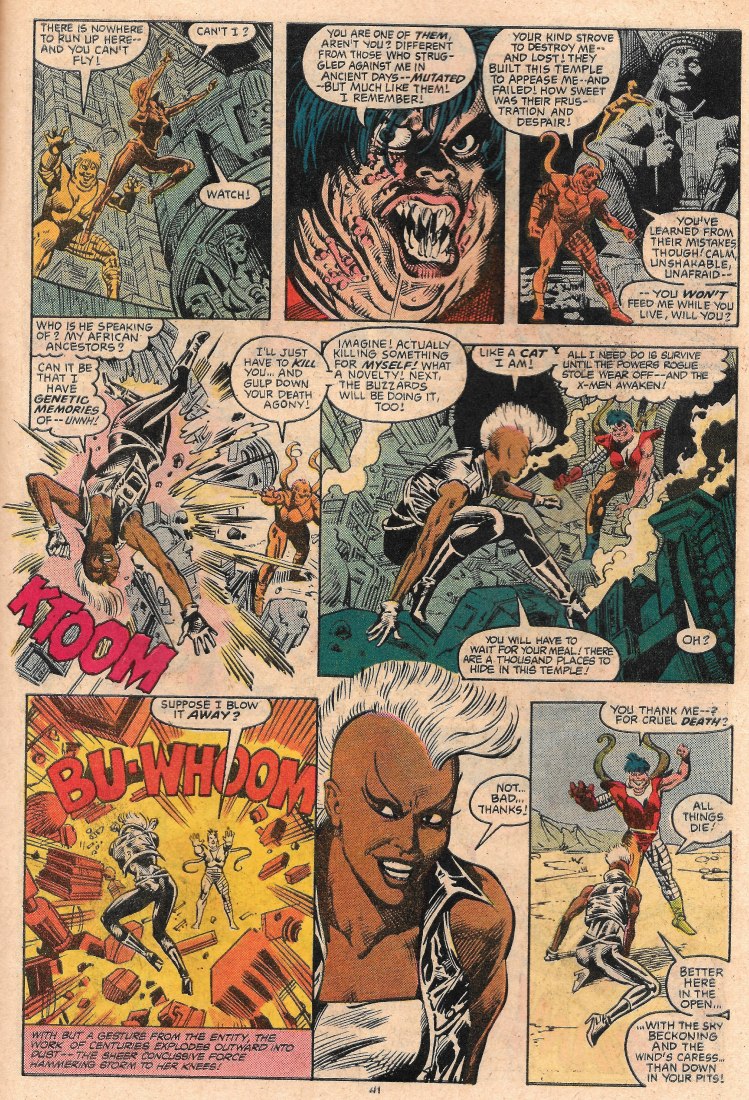 Then we get Mike Grell for three pages to bring the X-Men back in for a wrap up battle with the possessed teammate. Jackson Guice is on pencils with Steve Leialoha on inks and they really know their stuff. These pages work, if only they occurred in a different less schizo story with an understandable antagonist. The creature makes itself out to the personification of suffering meaning all this bouncing around isn't doing squat to defeat it. 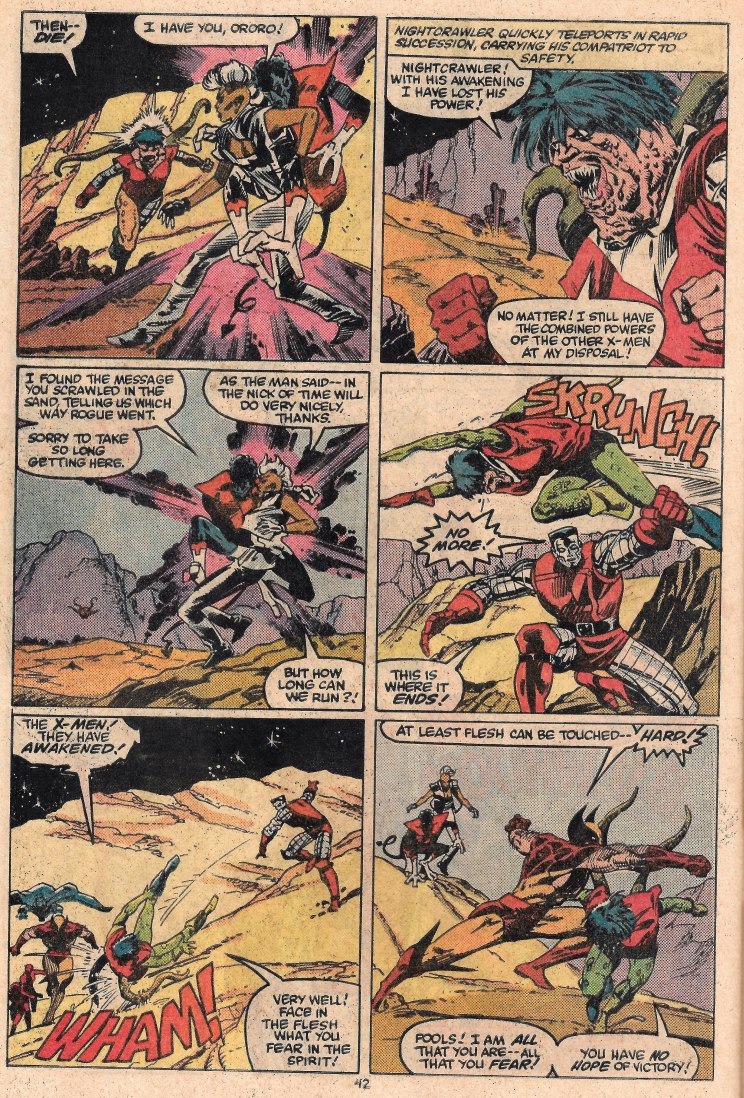 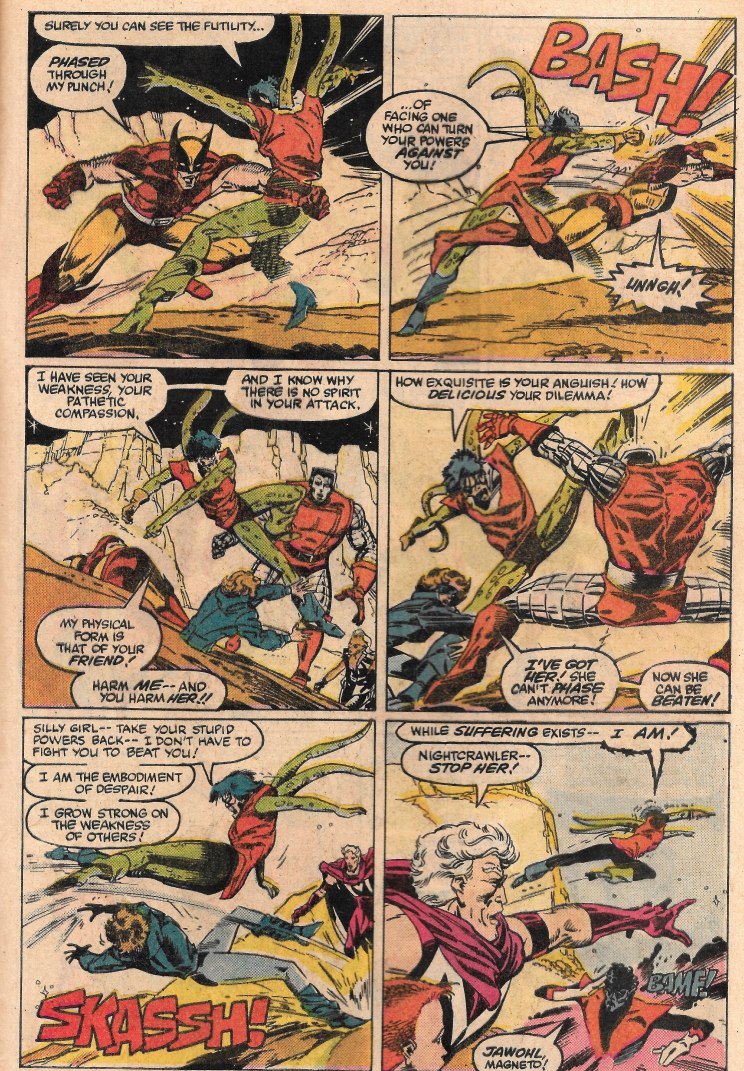 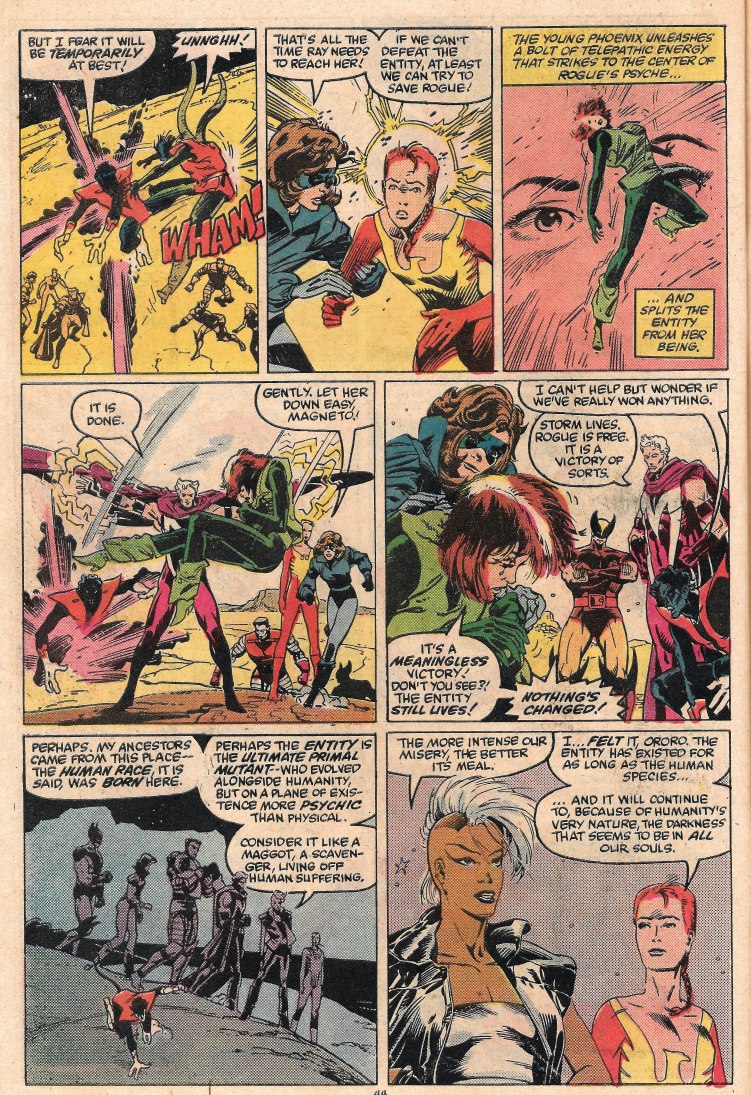 Yet defeat it they do…or at least drive it from Rogue's body. Which gets them diddle squat in my estimations. They are right back where they started from.

Then Archie Goodwin is trying hard for a four page wrap-up here and he isn't getting one. At least not one that bring that hope we've talked about in the title. Why not allow the X-Men to capture the entity somehow? You could still say that to repair the damage it had done and to keep it from gaining enough strength to come back that everyone needed to send $20 to fund relief efforts or something.

But no. It is just gone for a bit and the heroes go help unload more planes because it makes them feel good about themselves. Oh, and it probably occurred BECAUSE of Mutants. So Mutants cause famine and despair. Hmm, that's a big leap in logic.

I'll tell you what is more depressing: the final four pages are Howard Chaykin pencils being inked by Walt Simonson. So we have this really hamfisted explanation occurring over one-of-a-kind art and it's just planes and characters standing around for the last four pages. So much lost potential, as I respect the art styles of both those gentlemen and this doesn't give them much to draw. 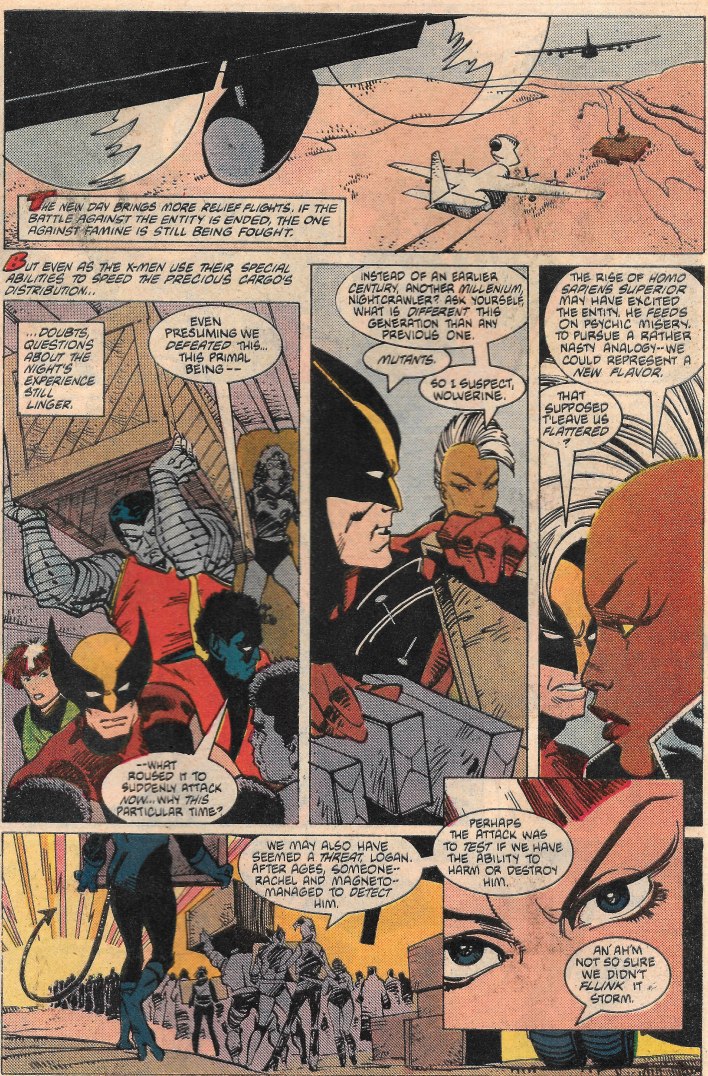 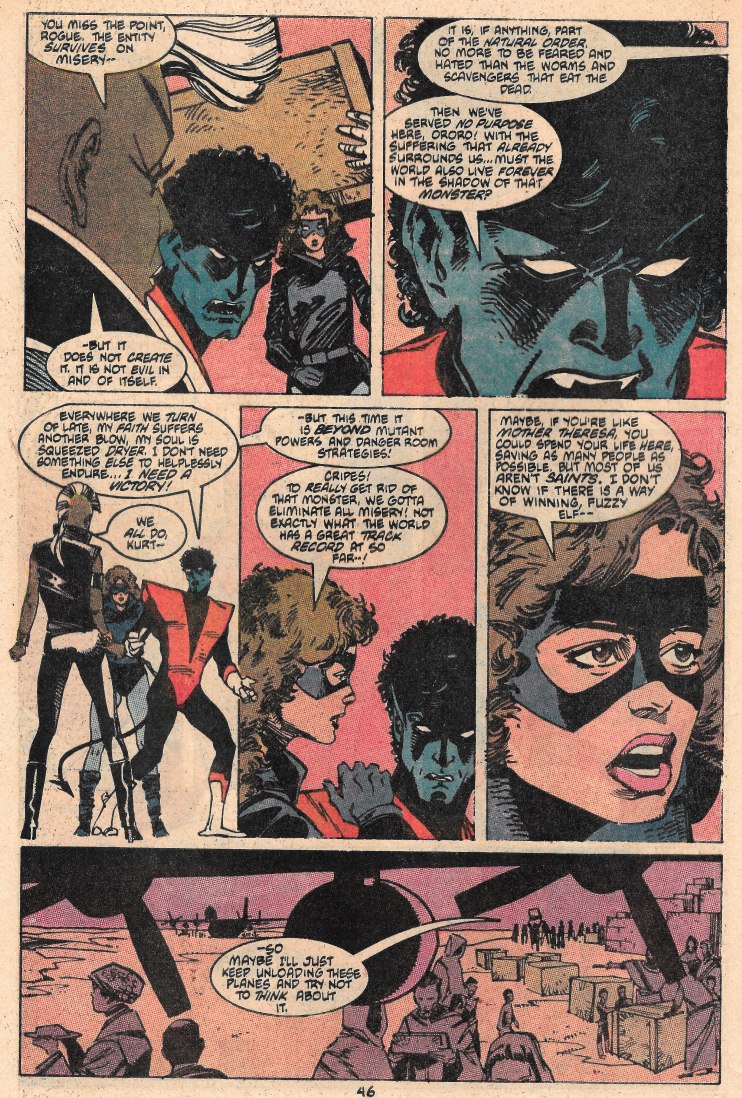 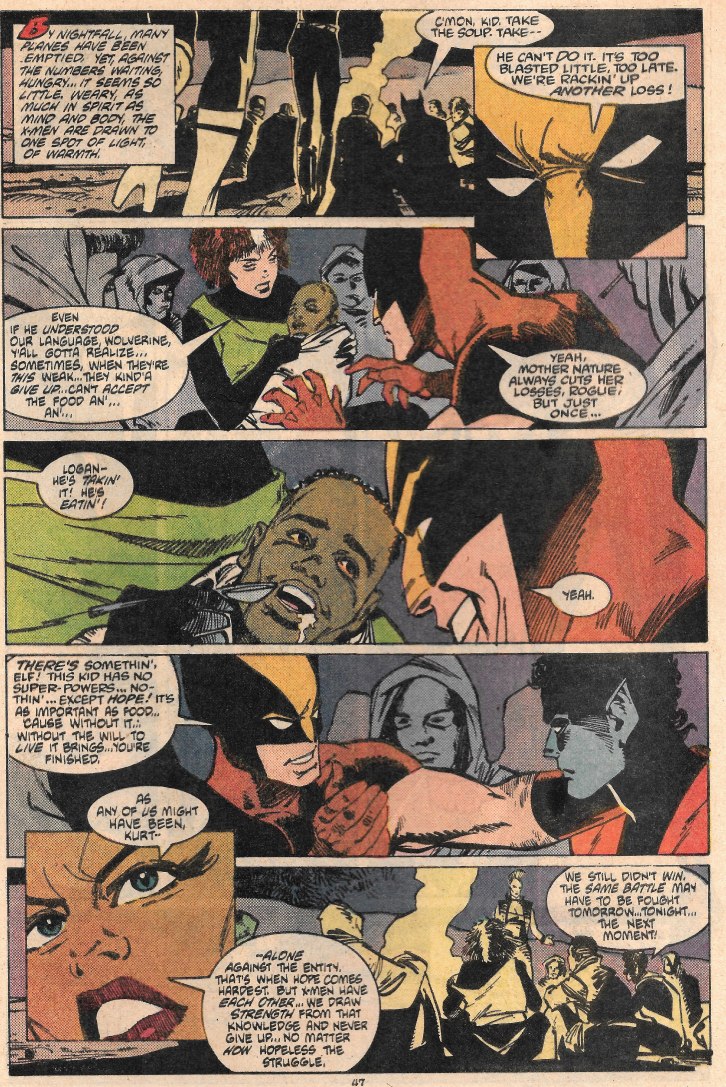 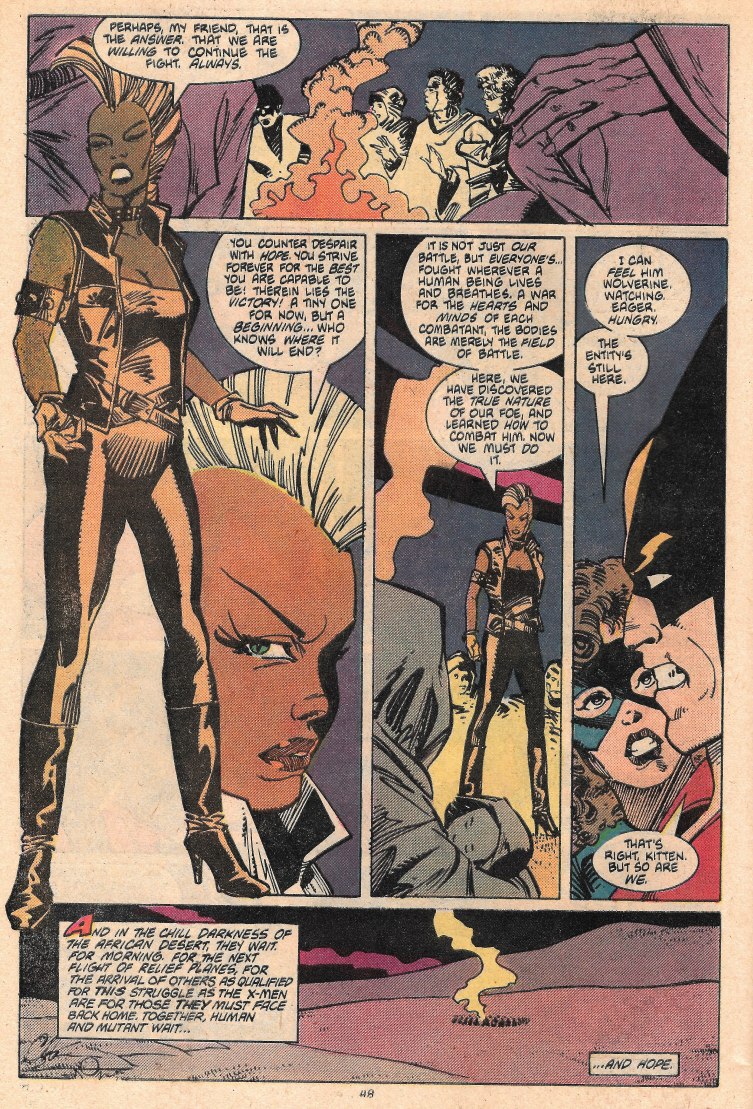 I'm including the letter to the readers that was printed as the inside back cover as an aside. 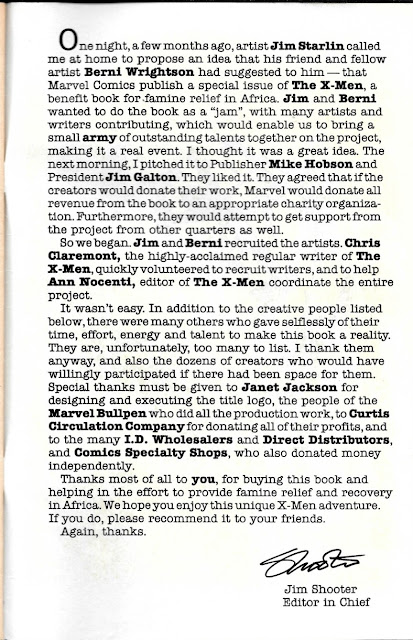 So much talent wrapped up in one book. And yet, even with all those pages of story, still not as good as even the mediocre issues of X-Men at the time. There's a phrase about "too many cooks" that ends with a bad tasting dish. We don't have that here, exactly. What we have is bland and unmemorable. We have a forgettable villain without understandable motivations and an unclear ending. Are there moments of brilliance in this? Most assuredly. I can point to that Moore/Corben matchup as worth the price of the book. But overall, I'd give this one a pass the same as I did back in the day.

One thing we shouldn't give a pass to on this Black Friday is helping out others. Included below is a link to the Red Cross, an organization that does help others in need. They were there when my daughter's apartment caught fire and burned to the ground, taking with it everything she owned. If you are in a charitable mood, maybe make a donation to help those across the nation who need a little assistance. The Red Cross website is HERE.

And as always, I'll be back with more crapbox soon.
Posted by SonOfCthulhu at 12:02 PM