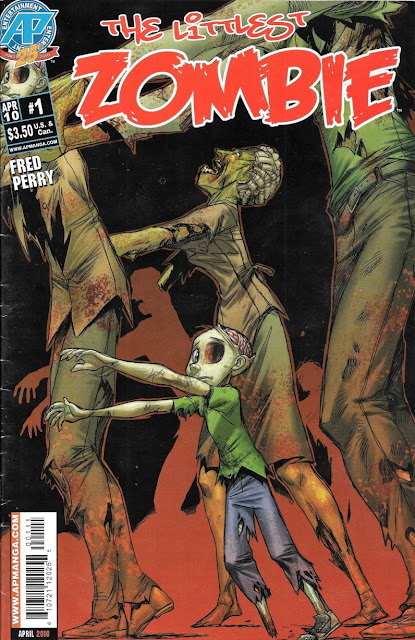 The story of the plucky little zombie that could

Fred Perry is on to something here. Tapping into the current wave of zombie love and the all too human response to all things adorable, Perry has created what may be the first zombie that we actually root for.

Perry is best known as the creator of Antarctic Press's unexplainable yet hugely popular Gold Digger series. By saying that, what I mean is that there probably is an explanation, but the book reeks of blatant manga-style cutesiness to the point that every time I've tried to pick one up (and there are literally a dozen or more in The Crapbox) I get violently ill and have to go take an insulin shot.

In other words, it might be good but I'll never know.

However, zombies I can get down with. I don't know what the 250 or more issues of Gold Digger are about other than cat girls with large breasts or something, but zombies I UNDERSTAND. And as much as I might like to meet a cat girl with large breasts, I think zombies coming into my life a much more likely occurrence.

The Littlest Zombie first appeared in the anthology "A Very Zombie Christmas" (marks title down on list of books to look for) as a short tale back in December of 2009. Since then, the character has appeared in three other books including facing off against the littlest vampire. This is a one-shot title and the story is fairly intriguing. Almost enough to make me try one of Perry's Gold Digger books. 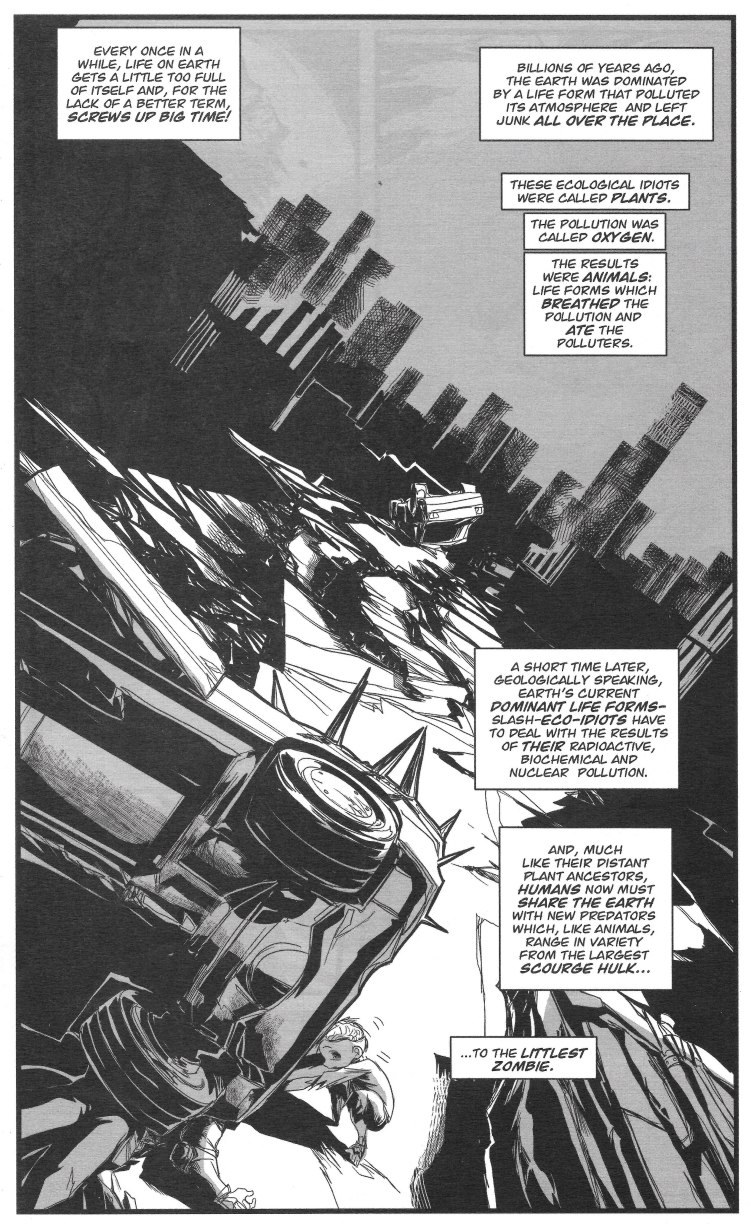 We begin with The Littlest Zombie (hereafter I'm nicknaming him "TLZ") just trying to make his way in the world, foraging for food underneath a wrecked car. Perry sets the stage with a great opening that allows us to feel a degree of sympathy for TLZ and zombie-kind in general, although that will change in just a bit. 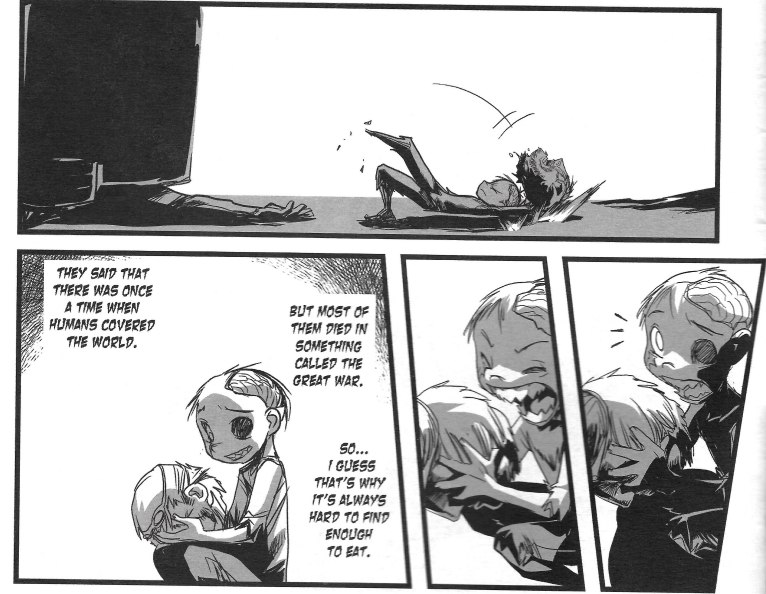 As in right now. 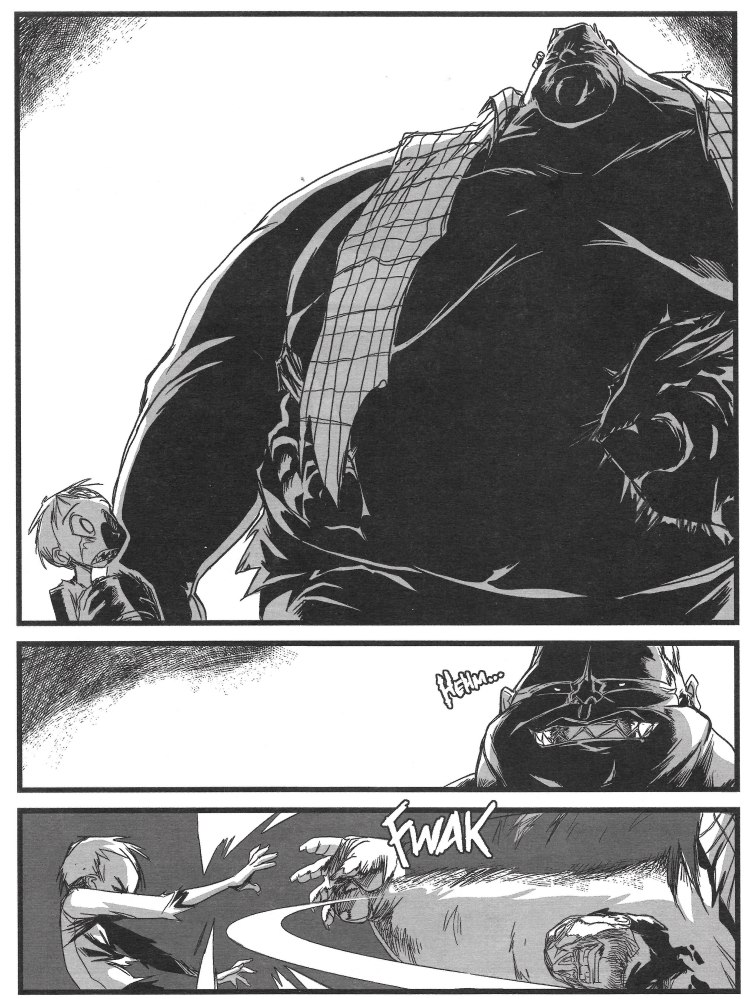 I dig on the art. It conveys what you expect it to: the right degree of horror and innocence. So the giant zombie takes away the littlest zombie's meal. *sad face* But then the unexpected happens… 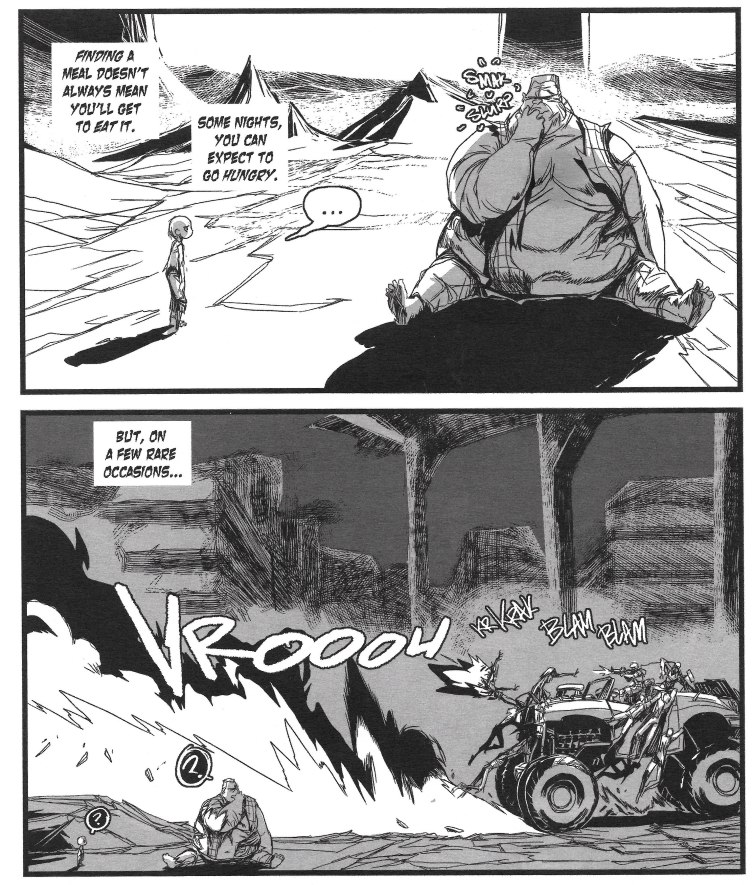 …and that truck full of tasty snacks with all these clingers on the outside smashes right into the side of a building, almost as if on purpose.

It's then that we get introduced to our four plucky human survivors. This quartet have one injured guy named Sam (from non-zombie bite) and a very important water purifier that means life-or-death to their tribe. Janine, the driver, thought to use a trick of driving through the building's wall to shake off the zombies. Wonder why that didn't work this time? 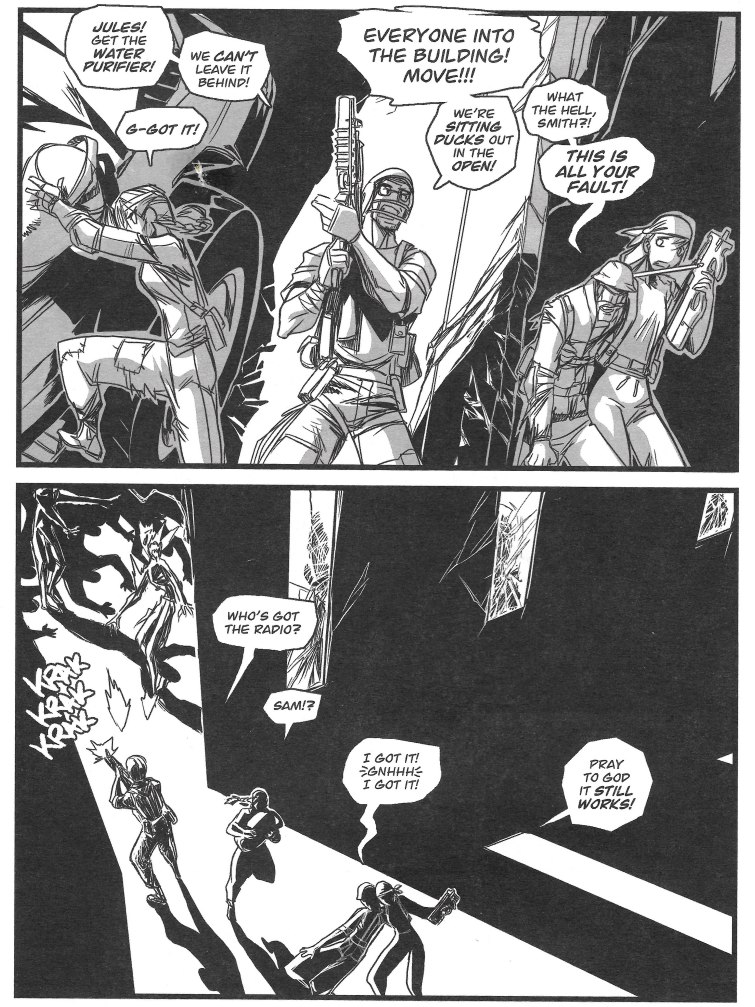 The building is a bank with reinforced walls, so now they are trapped in a bank building with no way out. And things are about to get worse. First let's check on TLZ though. 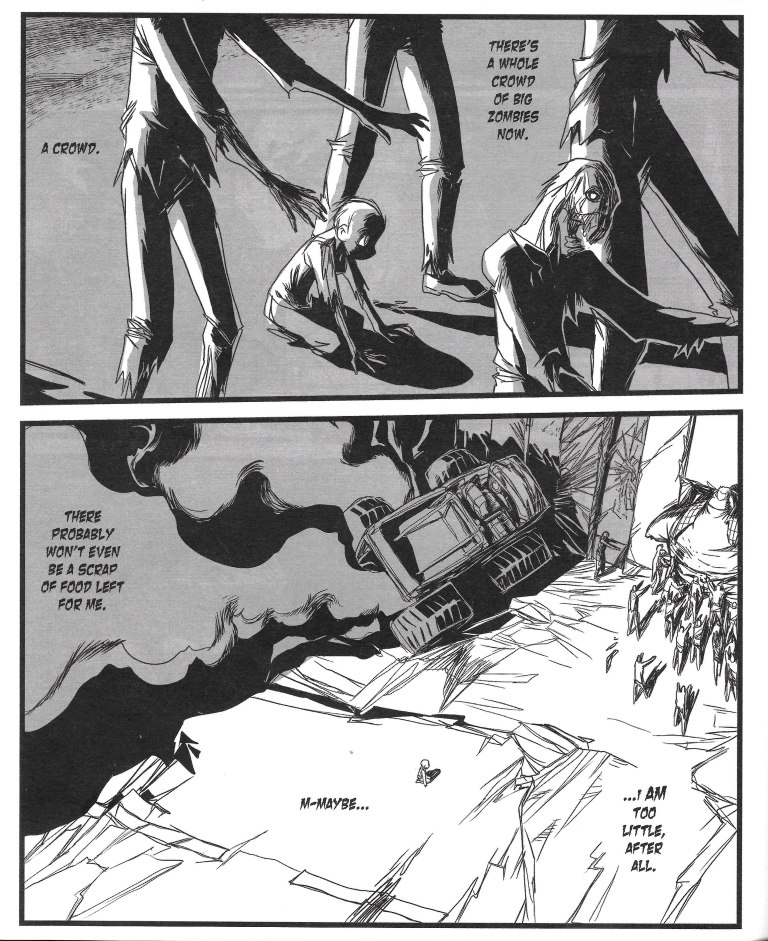 Aww. I mean, uh, yeah, well those are people you are talking about eating. Meanwhile big and nasty Zombie gets himself wedged in the doorway, giving the human survivors an idea. 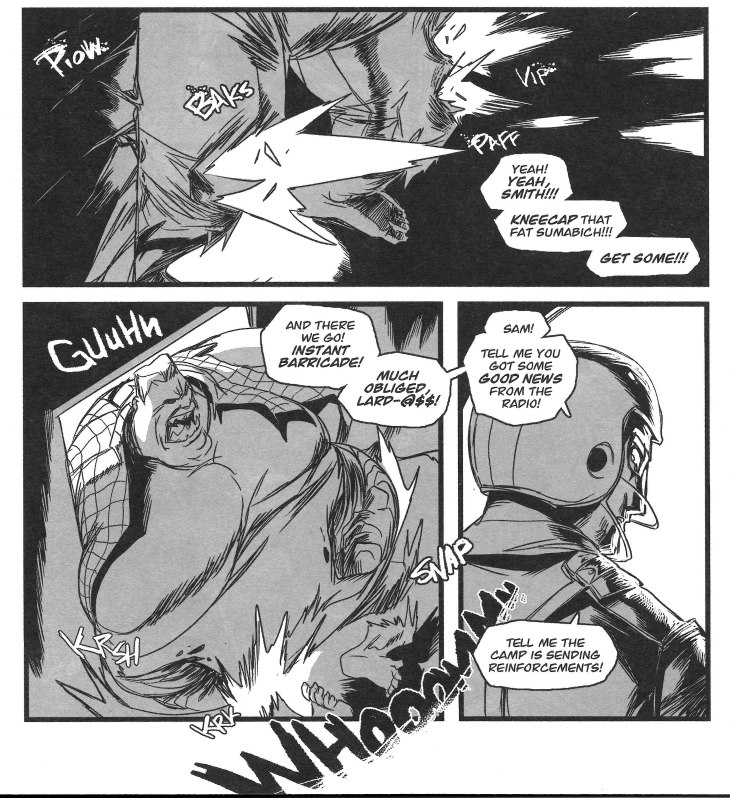 Sadly, Sam does not have good news on the radio. He's tried over and over again. And he's still an annoying cuss. Janine lays into him for being the reason the zombies had a chance to swarm them. Seems he got hung up "checking something" in the building that they got the water purifier from. Their arguing leads to this. 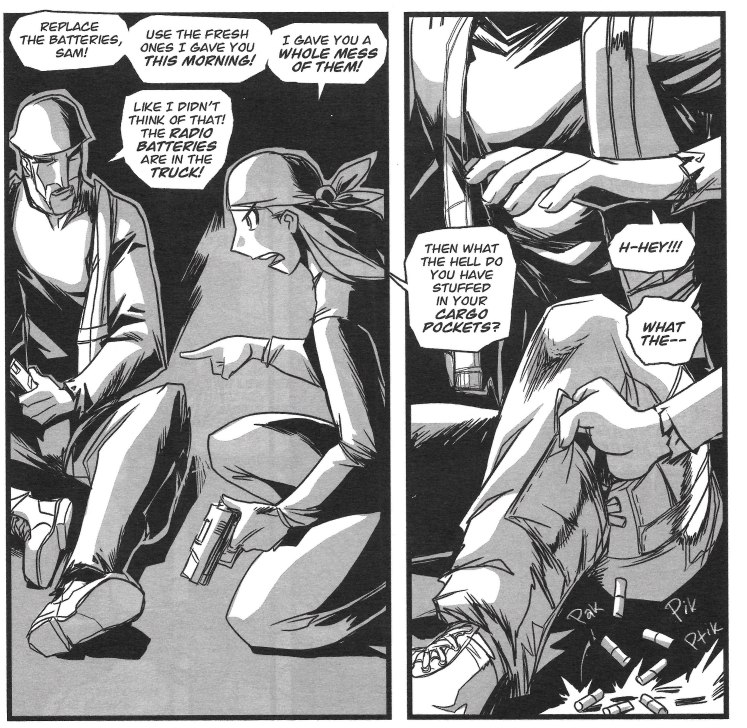 Yup! Those drugs called "stims" and Sam was late because he was procuring them for himself. Nothing like a little conflict to liven things up in our little group.

Just as the arguing reaches a fevered pitch, Jules, the other female who has been silent for all this time offers up a way out. Not in a good way mind you. 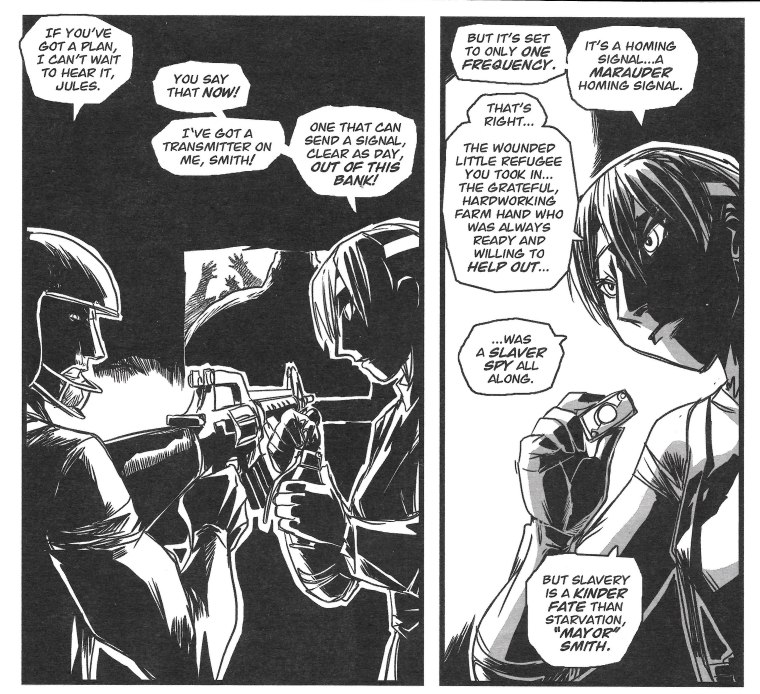 What does this mean for our trio who aren't slaver spys? Well it means they become just as much of a parasite on humanity as the zombies outside, using their knowledge of the camp to help capture it. Not that being a parasite doesn't come with perks… 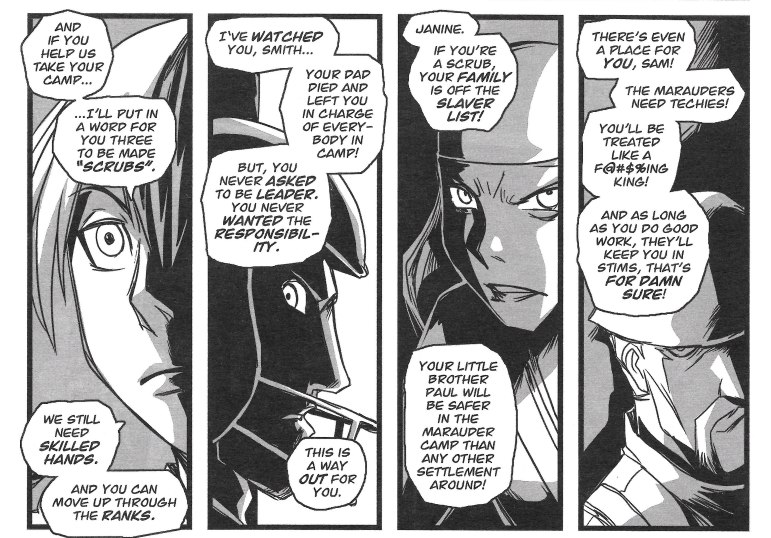 And there you have it: Perry has pulled off a silly little tale of a weak little zombie wanting to get a bite and turned it into a story that sets us with a neat moral question for us to ponder. I have to admit when Jules gave this as an option, I saw it as possibly the ONLY way out the situation for these folks. Well, maybe not the only way, but the only way where they were still all alive. However Perry has a few more surprises for us.

Meanwhile TLZ has discovered something in the truck the survivors drove up in. 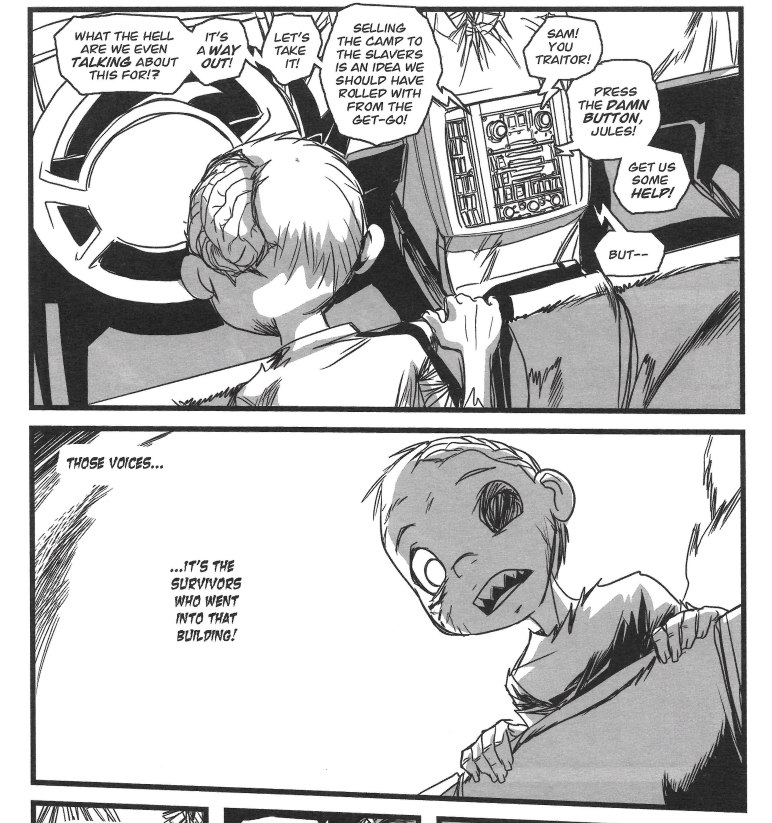 And if he can hear their voices that means… 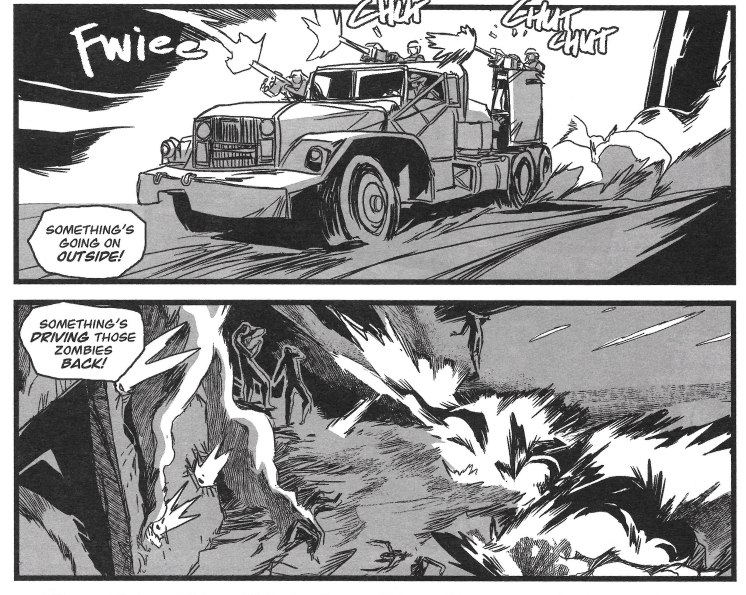 Yup, that radio was only half working: sending, but not receiving. Now we have an even bigger mess on the hands of our four-some, because what they just did was basically sell out every member of their tribe for their own lives. And the rescue team might not be too happy about that.

However when asked to drop their weapons, Jules pulls this stunt… 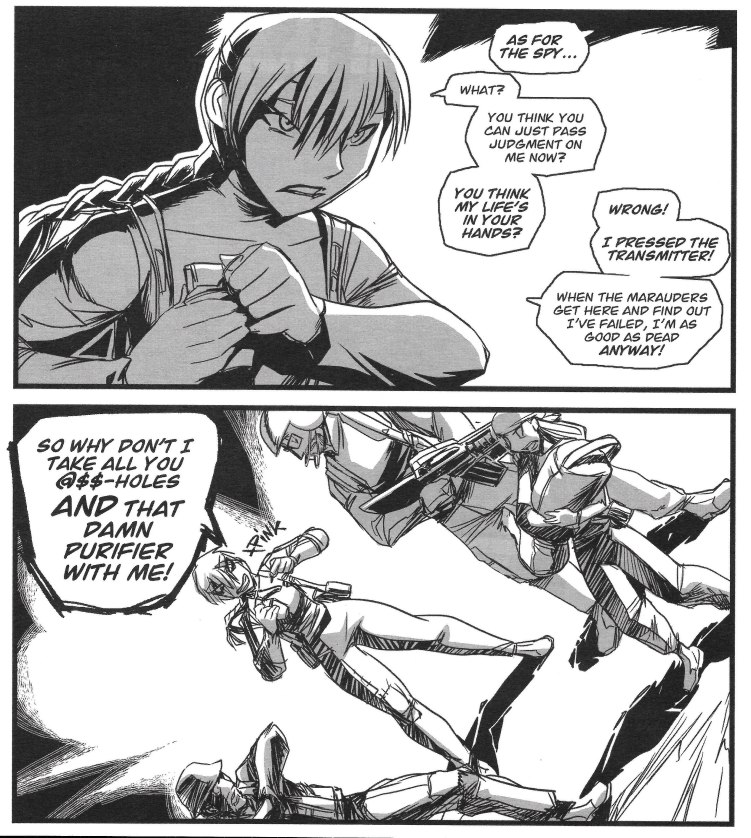 The grenade explodes, as they are wont to do when their pin is pulled, but in a dramatic reveal, how things end up isn't quite what you would expect. 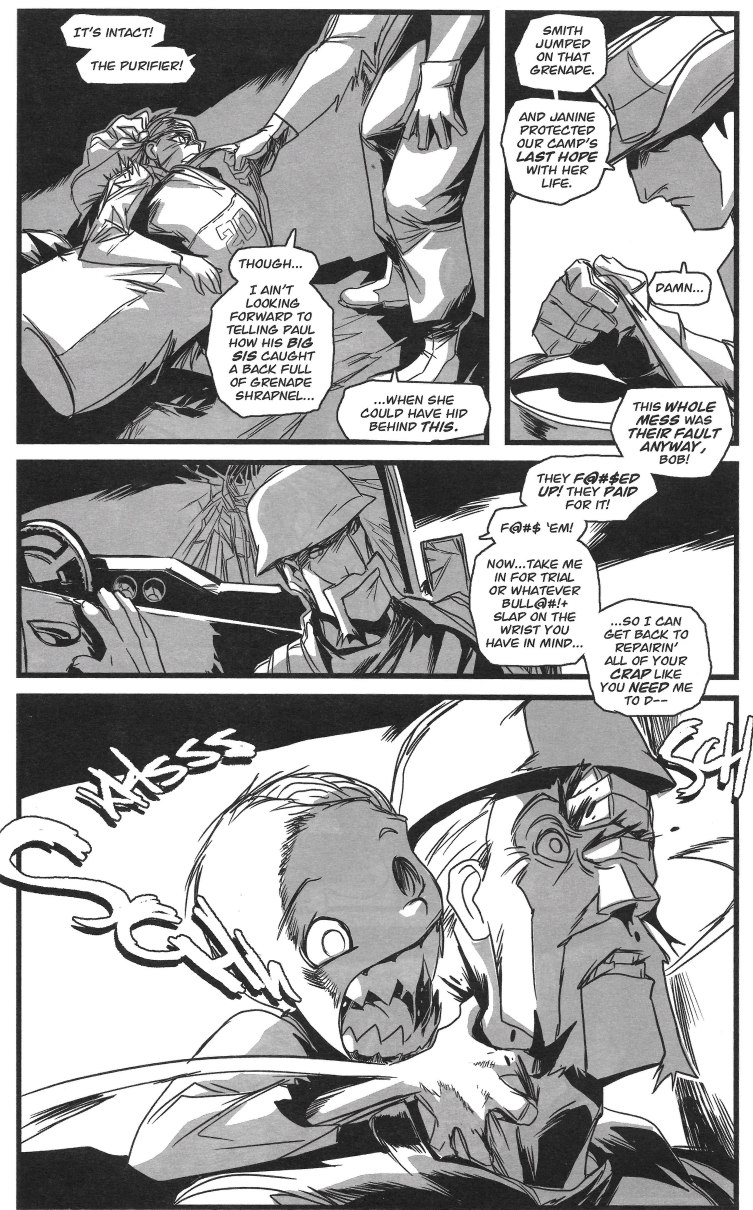 Awww…cute!
Heh, no. Not really. But apt. Sam gets to be a morsel for TLZ and the others cut their losses and leave with the purifier. Meanwhile TLZ gets to have his cake and eat it in front of the remains of big zombie jerk, so win on that front at least. 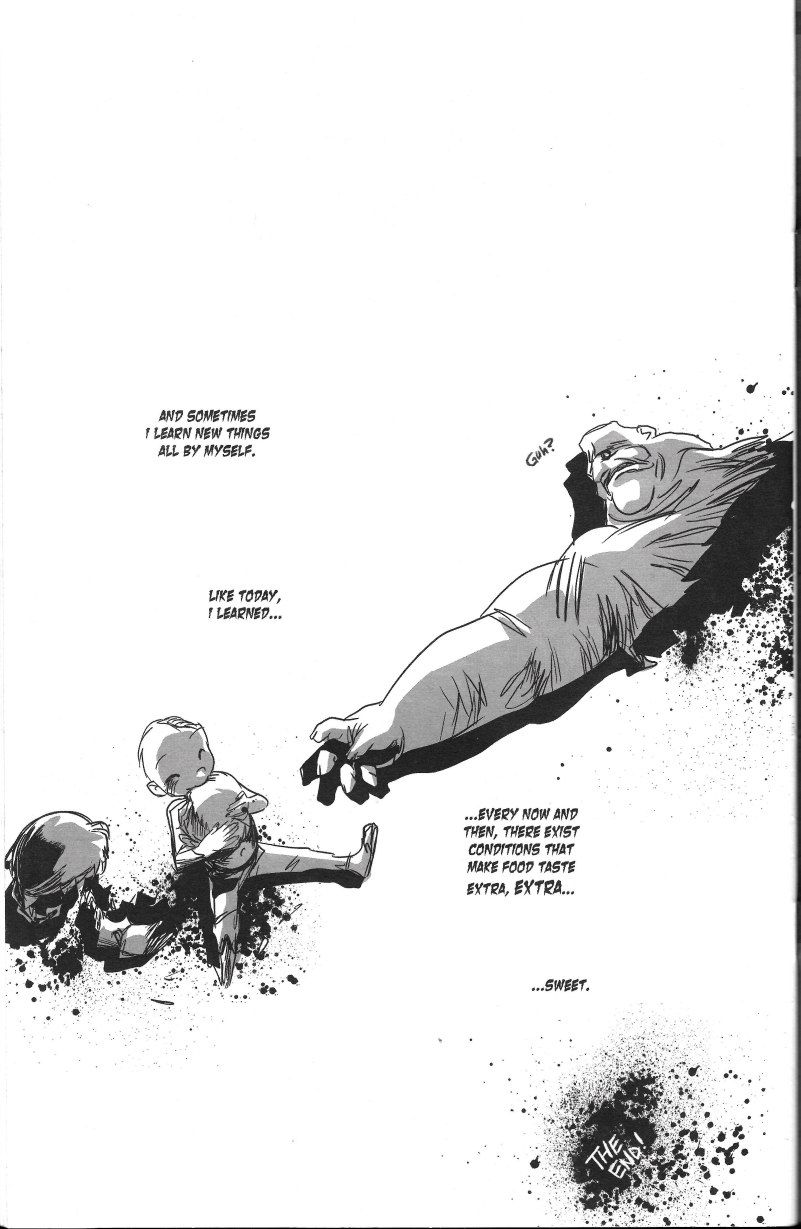 So this issue won my ass over. After Halloween is over, I will dig out a few of those Gold Digger books and give them a try. Perry has a good grasp of story and if they have any of this books pacing or humor, I might be able to stand them. As for TLZ, there are several of his books floating around as well as the A Very Zombie Christmas volumes yet to find. You should probably get them too.
Posted by SonOfCthulhu at 3:07 AM