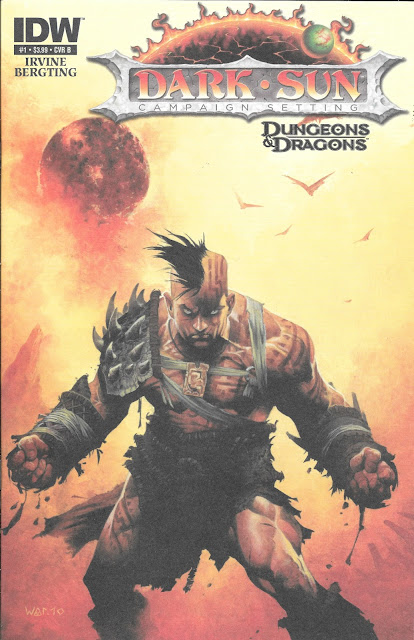 In the early 90's, TSR took a gamble and released two new Advanced Dungeon and Dragon campaign settings. Campaign settings are backdrops for the DM to use that include maps, scenarios to build long adventures around and special bestiaries to befuddle and amuse players.

The first release came in 1990: Ravenloft, a dimension surrounded by mists that was filled with classic horror monsters, some so powerful that not even the most well-rounded of parties dare tackle. Being the horror geek that I am, I loved the concept and bought every module hoping to someday run a campaign in the "Domains of Dread." 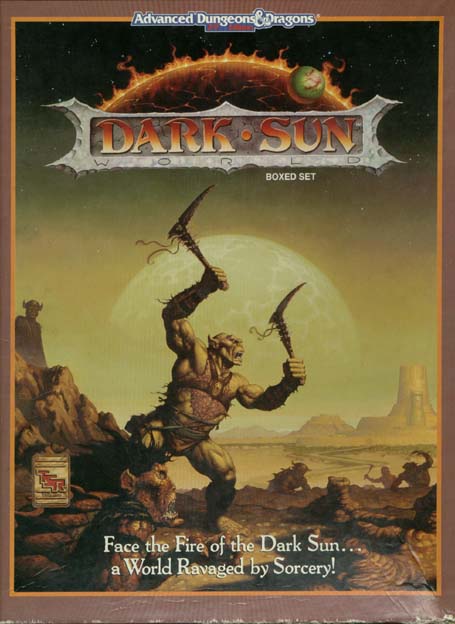 The second appeared a year later and was titled Dark Sun. Centered around artwork by the legendary artist Brom, Dark Sun looked like a desert world with huge bodybuilders wandering around in bondage gear. You could color me unimpressed at the time. I mean the artwork was cool (or hot, due to it being red-toned arid sand dunes) but who wants to wander around a desert? I mean deserts are plenty boring, right? 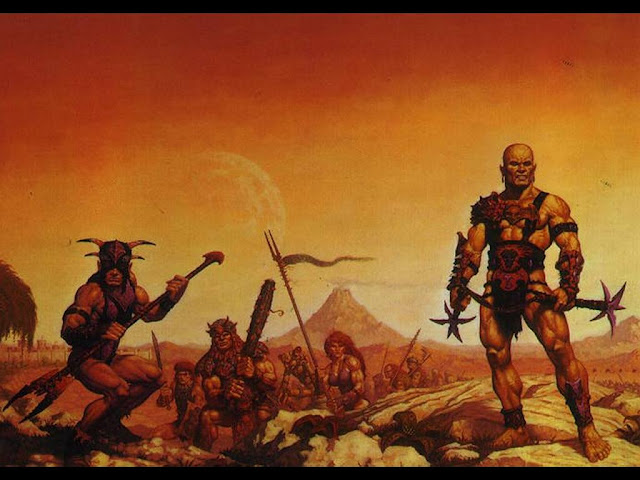 I ignored Dark Sun and went about my business.

Turns out I was dead wrong.

Dark Sun just so happened to be TRS's most inventive campaign setting to come along in years with a deep overarching narrative, complex, unique new character types and a storyline begging to be played. And here I was fully invested in Ravenloft, ignoring Dark Sun completely.

It wasn't until a friend struck up a game and I started reading the first book series as background that I learned what I was missing. Troy Denning's Prism Pentad filled in all the backstory I needed on the desert planet Athas, the setting of Dark Sun. Athas had been a garden paradise until ecology destroying magic had rendered the entire globe a wasteland where few creatures survived. Those that did make it existed in a post-apocalyptic Mad Max-meets-D&D type world with gladiator arenas and oppressive city states, each ruled by a rarely seen "Dragon King". The Dragon Kings actually devoured the lifeforce of Athas, unbeknownst to their populace, however they used that lifeforce to remain immortal, all-powerful despots that no one dare challenge. 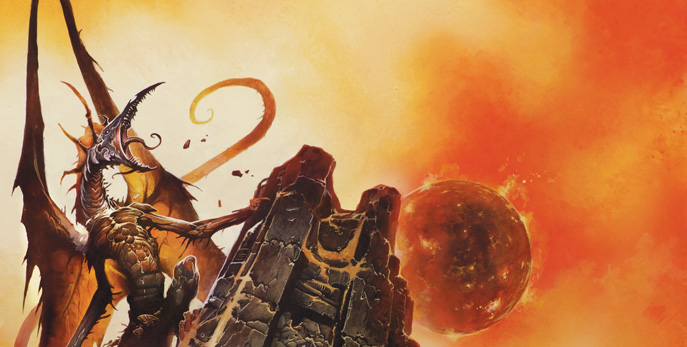 Other little nuances made the setting so appealing. Magic was abhorrent to the populace, but psionics widely available and used. Dwarves were close to hairless, halflings were savage cannibal tribes, human-dwarf hybrids called muls and half-giants called goliaths vied for strongest race-type, and elves were untrustworthy tradesmen or shepards. 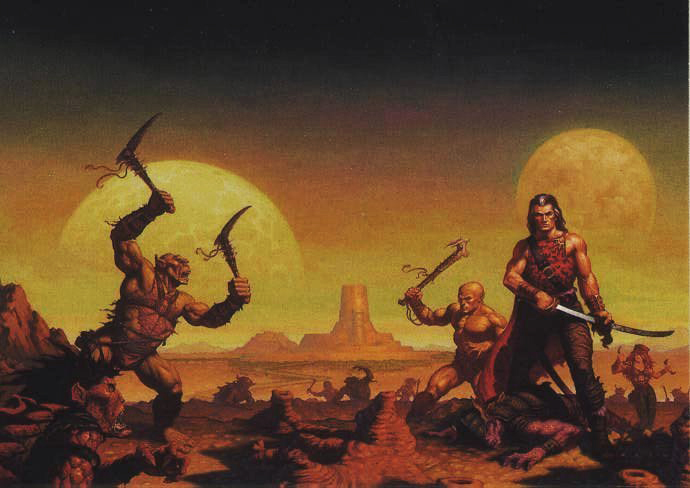 Fancy playing a giant bug? Dark Sun had giant, human-sized insects called thri-kreen. Want to be a wizard? (Harry? Or in the case of Dark Sun most characters were un-hairy) Do so at your own risk. Love rolling lots of dice? We have Gladiator OR Barbarian/Brute classes to fill your need.

Plus you couldn't find a world more in need of saving than Athas. Those Dragon Kings were some bad mamah-jammahs.

What made Dark Sun leaps and bounds ahead of Ravenloft as a campaign setting concerned how characters ended up there. Ravenloft was meant to be a setting that characters of Greyhawk or Dragonlance or one of the other settings stumbled into. The standard good-triumphing-over-evil fantasy trope applied to those realms. Then they were introduced to a land of nightmare and the trick was to escape it.

With Dark Sun no escape was possible. These people lived a nightmare existence every day. If you didn't watch your back on Athas, your life was forfeit. The strong were just a vulnerable as the weak. The Dragon Kings created gladiatorial contests to identify potential champions and then wear them down. And some of those contests weren't strictly voluntary. With food being scarce, you never knew who to trust. Anyone might sell you out for a day's meal. And if you though being in town shortened your lifespan, you were in for a real treat the moment you stepped out on the desert.

Athas' deserts offered a million ways to die, none of them pleasant.

The desert is where we find our hero of this five issue limited series from IDW. His name is Grudvik and he is many things. Former gladiator, former lover and almost former slave. It was that last bit that brought him out here, his escape from slavery a hard won commodity. 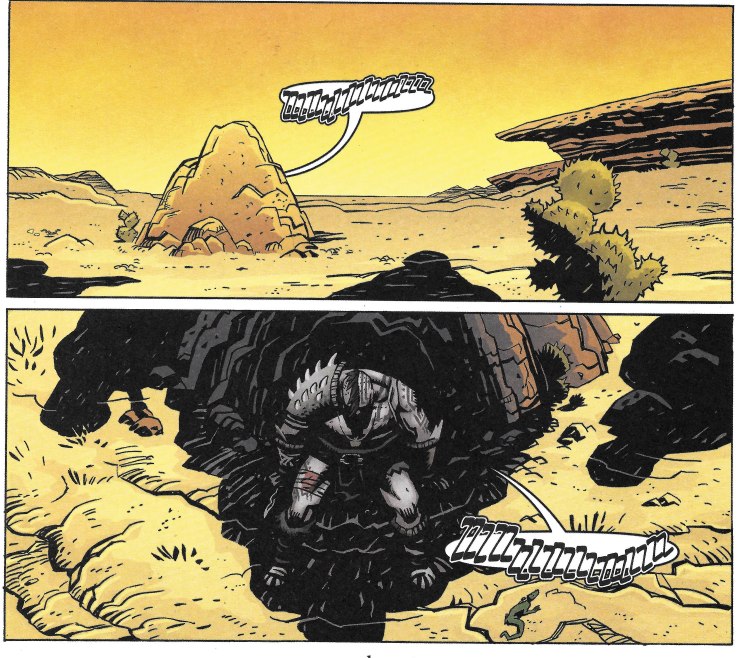 A commodity that the slavers sent after him hope to gain back. Their chances look much improved as Grudvik sleeps off the midday heat, oblivious to their approach. 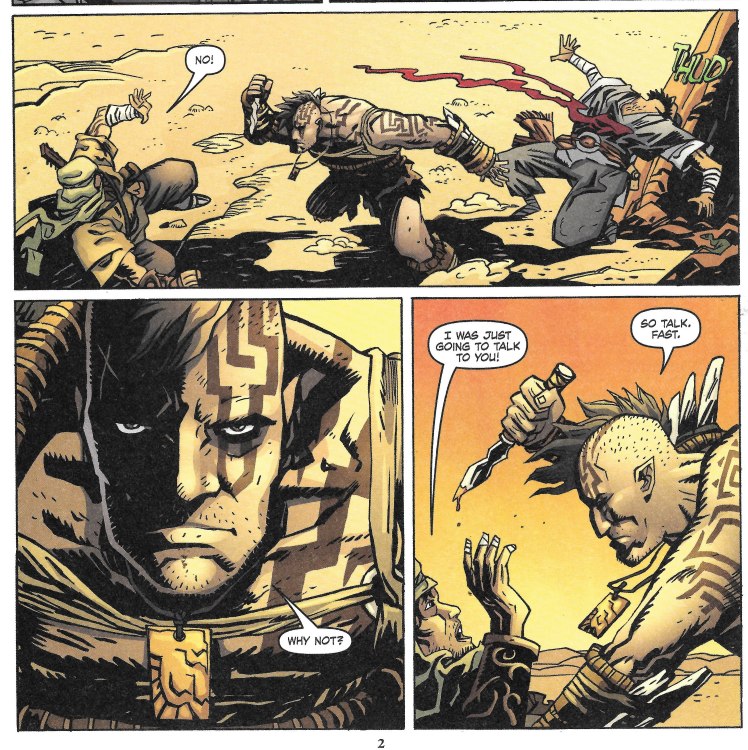 Maybe not so oblivious. He guts one and prepares to impale the other, but hesitates, giving the man a chance to plead his case. He introduces himself as Aki and states that most slave hunters would fry Grudvik's brain with psionics then cart him off. He suggests an alliance to get out of the desert. Grudvik seems unimpressed with him. Oh, and Aki is obviously a bard because he cares about Grudvik tossing his guitar about carelessly. 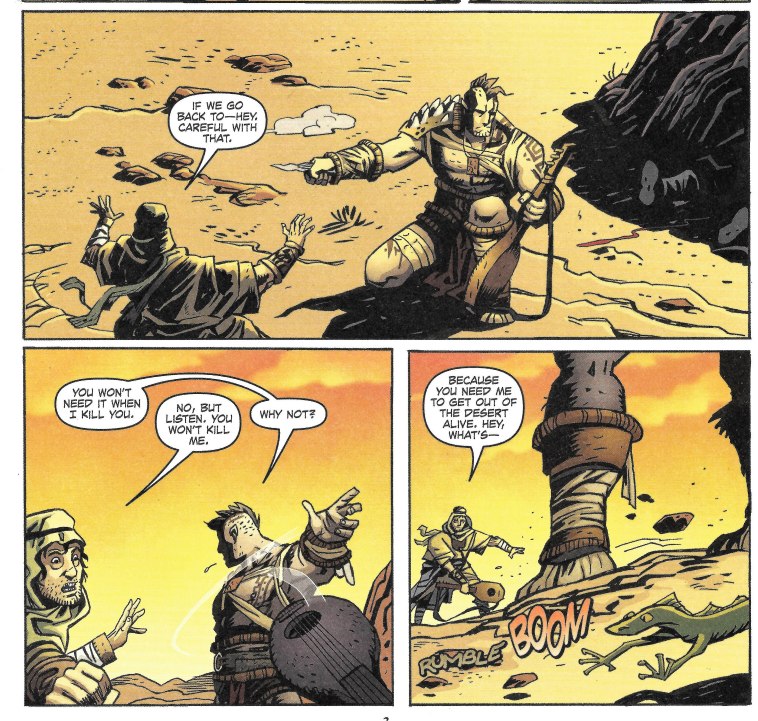 I love Grudvik's retort. "You won't need it when I kill you." Classic. 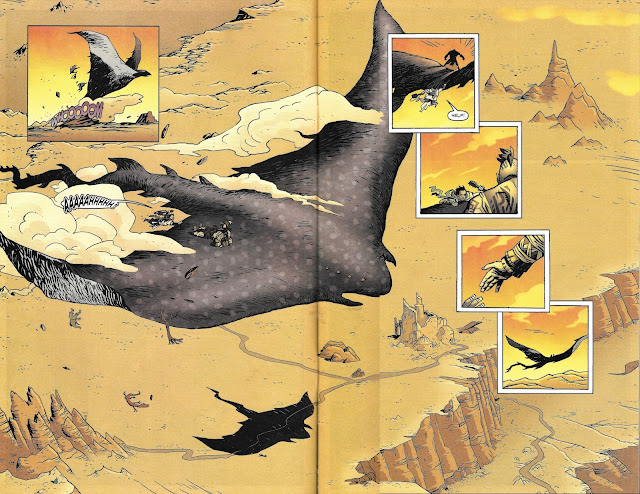 And then the ground literally gets pulled out from under them as we find they've been arguing on the back of an enormous cloud ray elder, which chooses this moment to take off. 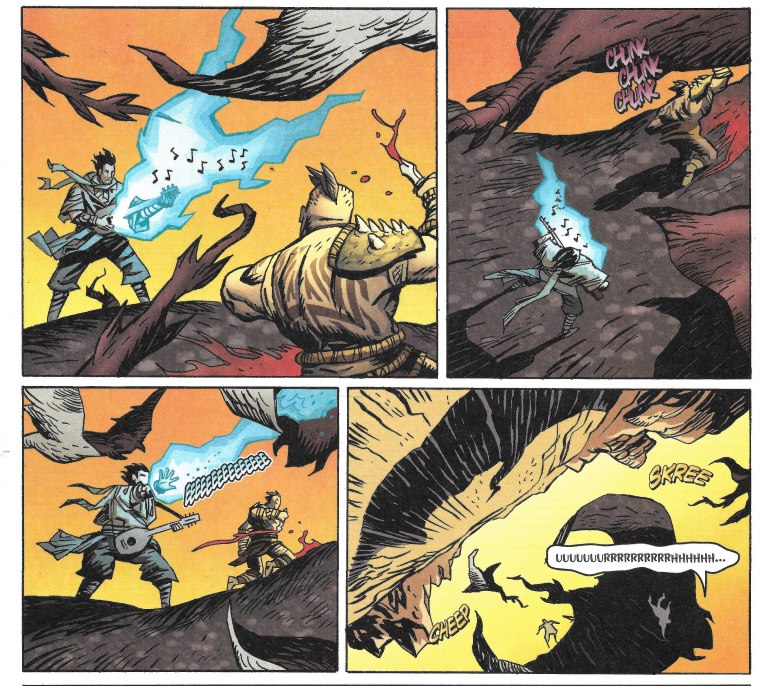 Some of its young attempt to pick the pair off the back of "Mom?"/"Dad?" (I don't know here, giant flying manta ray sex identification wasn't part of my college coursework.), but are met with Grudvik's teeny-tiny knife and Aki's bad banjo picking. 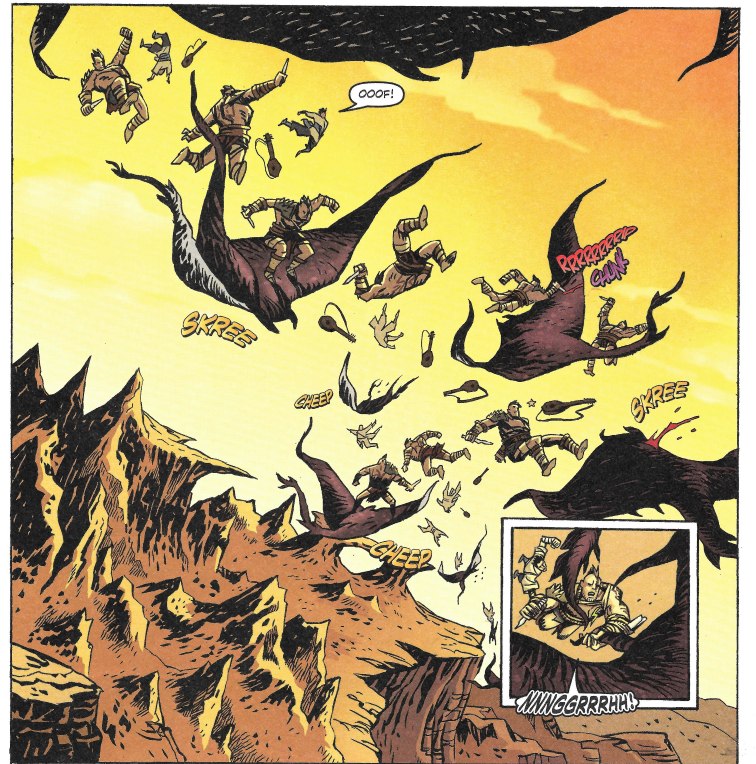 In the end, the elder flips over, leaving the pair to bounce from pup to pup all the way down to the sandy desert. 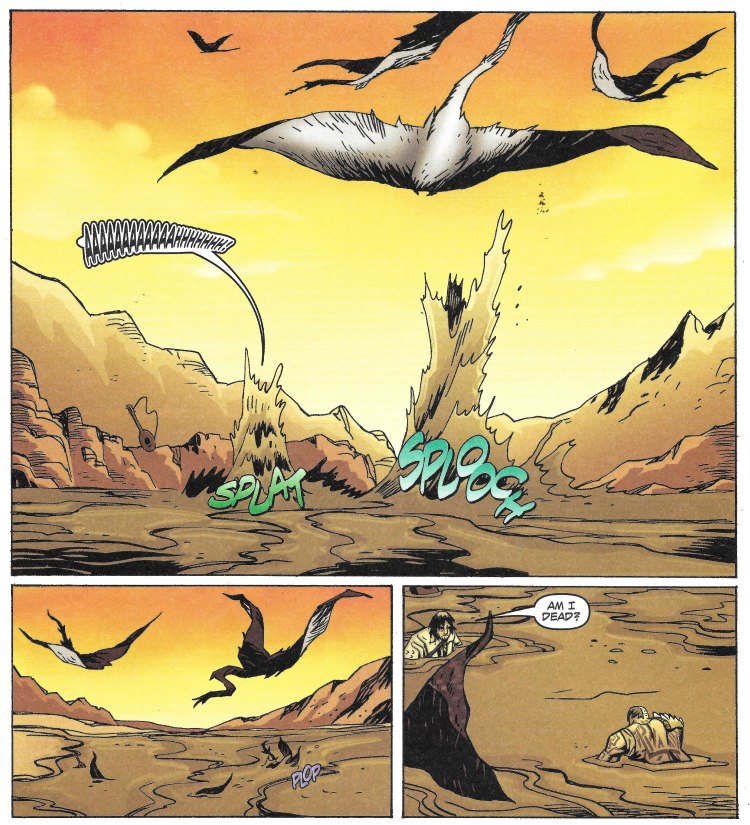 They survive only because they land in the Silt Sea, the only remnants of the great ocean that used to cover the world of Athas. As they will discover, it harbors menaces as well. 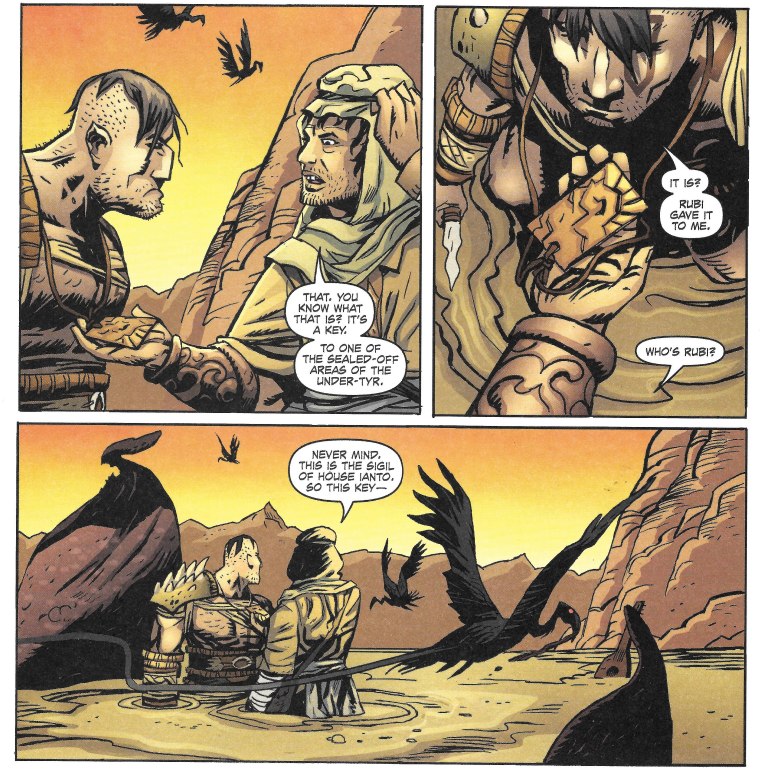 But before they can discover them, Aki's interest in Grudvik's necklace leads to some startling revelations. 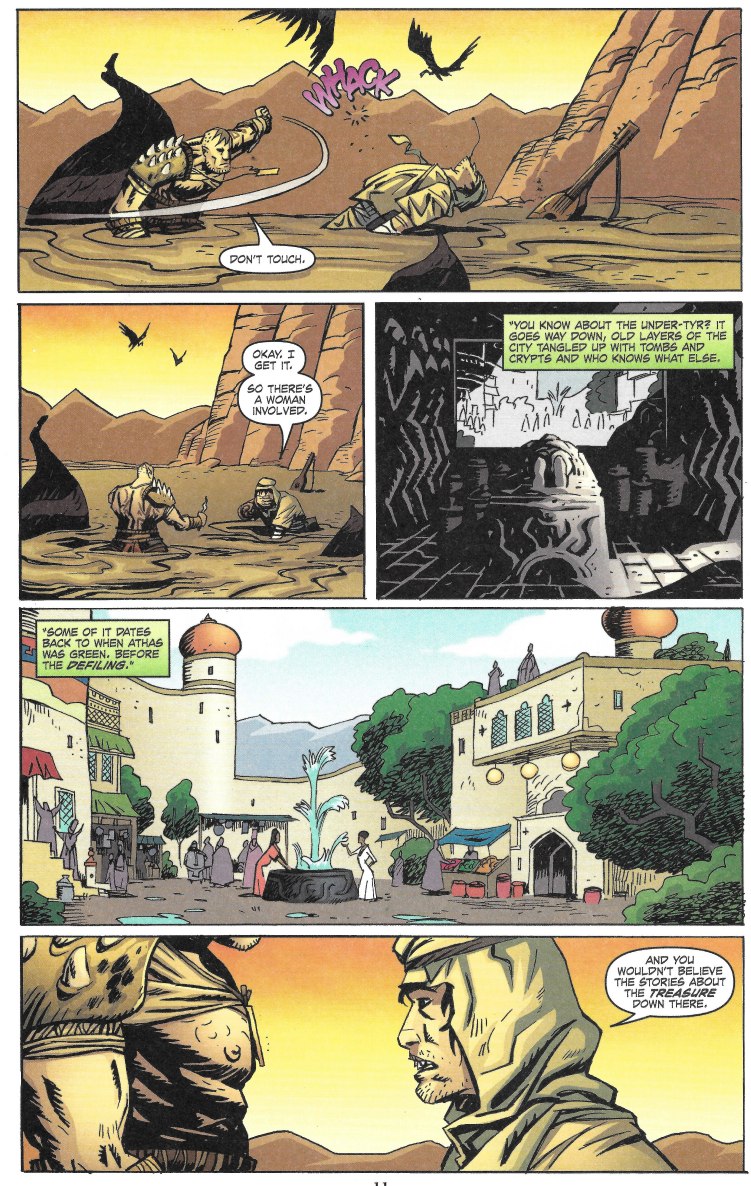 Not necessary welcome ones, at that, as Grudvik's relations are not a topic for discussion. Or maybe they are?

However, Aki shows no interest in who Grudvik may have bedded, but only in the potential of using the undercity key to find riches and treasure. 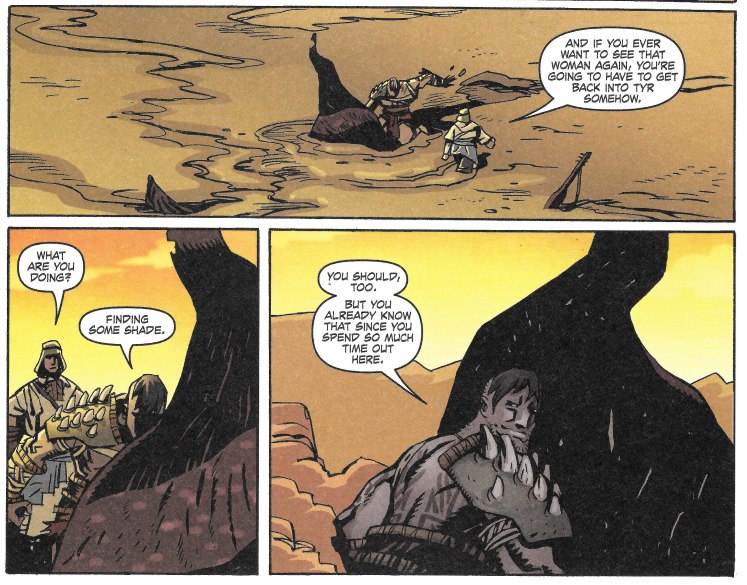 None of this really matters if they remain trapped in the desert. And speaking of desert, it gives them both a chance to banter back and forth and us to watch a begrudging partnership unfold. And in a partnership there is always one stronger and wiser in the ways of the world, while being a bit of a pompous ass… 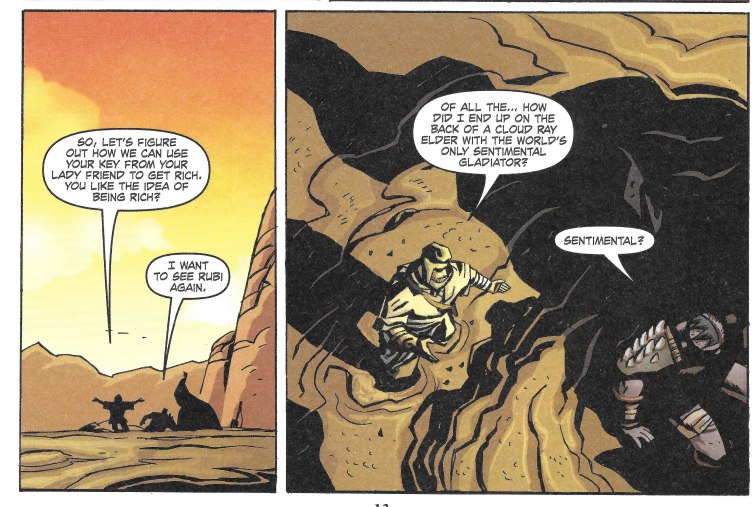 …and another being weaker but wily, having lived on their wits and survived by the seat of their pants. Eventually they will begrudgingly admit a measure of respect for the other and grow to become friends. At least in most places, but this is Dark Sun. Likely Aki will end up betraying Grudvik in the final panels or Grudvik will straight up slit the slender bard's throat. 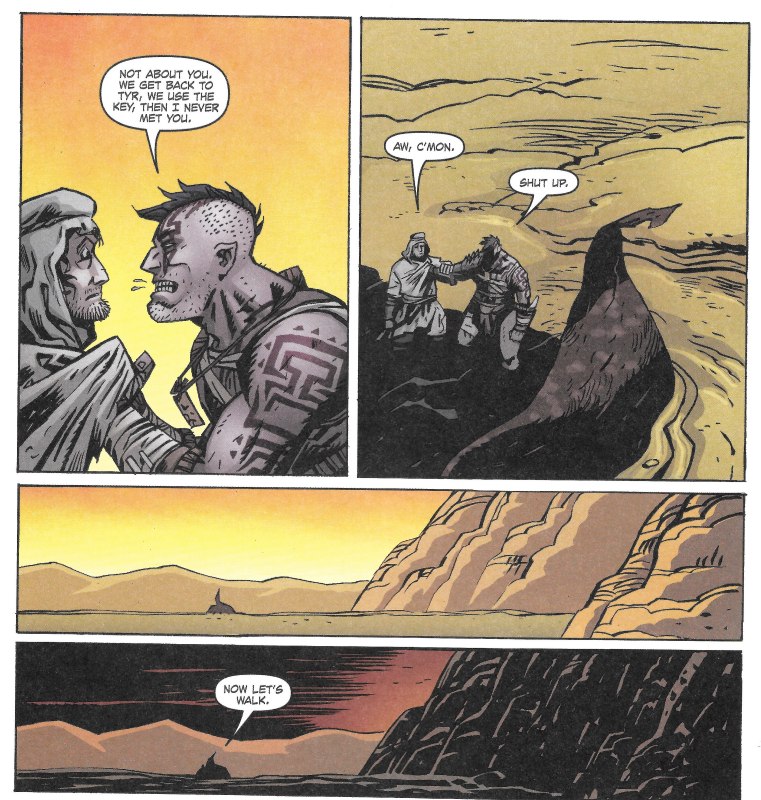 "Listen! We ain't partners, we ain't buddies, and we ain't friends. And if Ganz gets away with my money, you're gonna be sorry you ever met me."
"I'm already sorry."

A free comic to anyone who emails the Crapbox with where those lines came from. 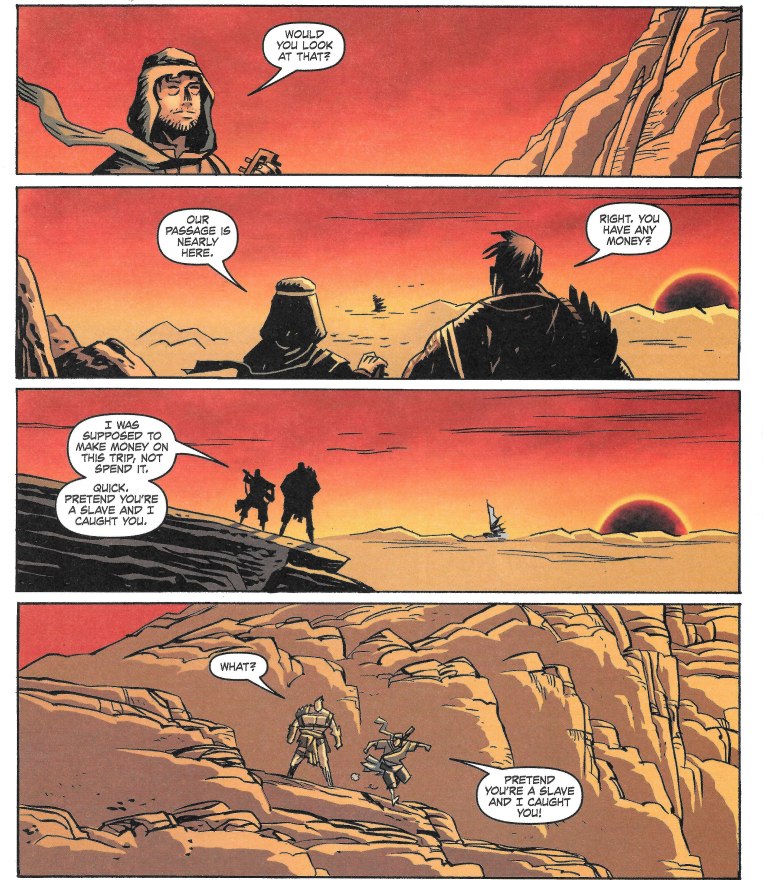 Of course that's only if the Silt Sea doesn't do them in first. Because everything on the world of Athas is dangerous. Including booking unexpected passage on a ship sailing across the sandy desert. 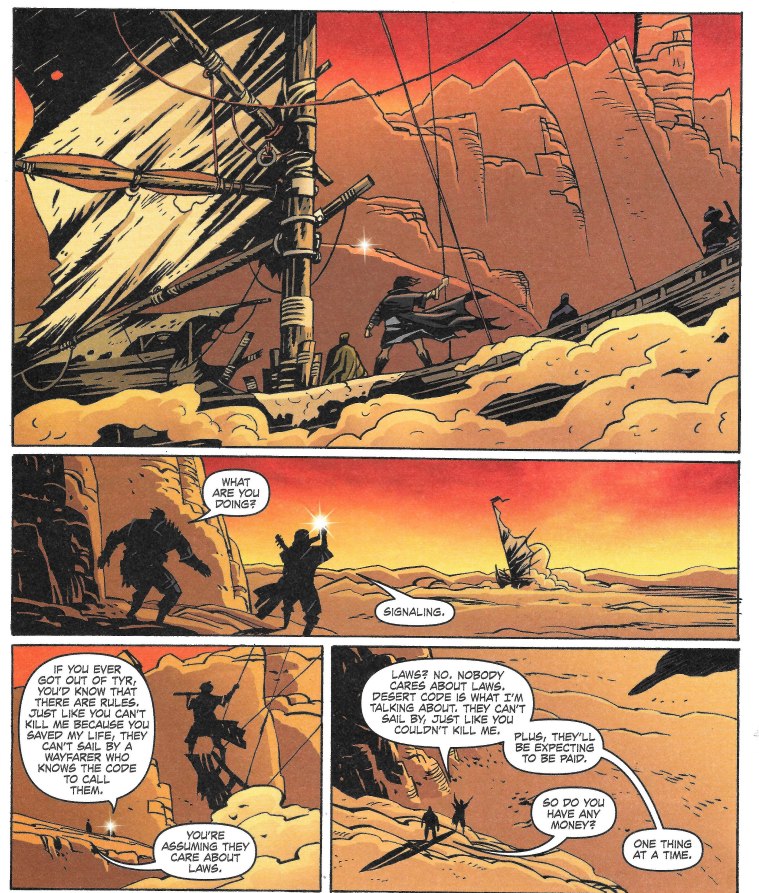 Aki spins a story that gets them passage for money he doesn't have yet. However something odd and green slithers up behind the wake of the ship as they leave. Perhaps they aren’t the only ones who wanted to climb aboard?

No matter as once they are underway it's all smooth sailing. Smooth enough for Aki to pose the question to Grudvik as to how he came to be on the run (the story of which was in Dark Sun #0). So Grudvik, in an oddly talkative mood, recounts the tale for him. 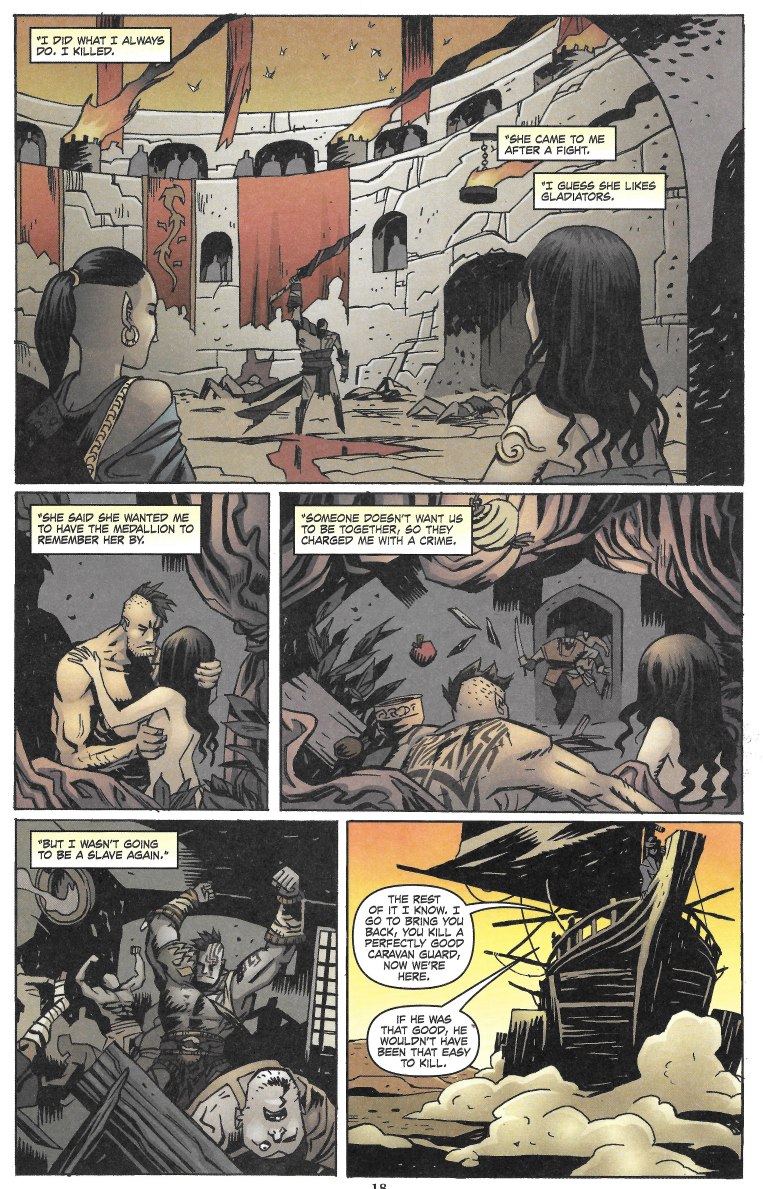 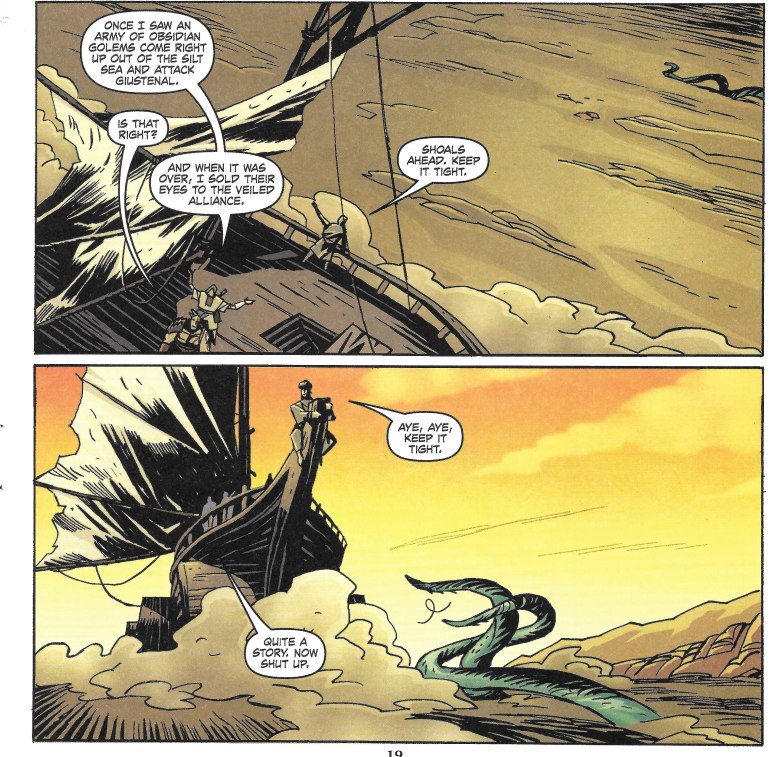 Why it's our tentacle-beast from a few pages ago. IA! IA! Lil' silt horror fella. He does exactly what you'd expect him to… 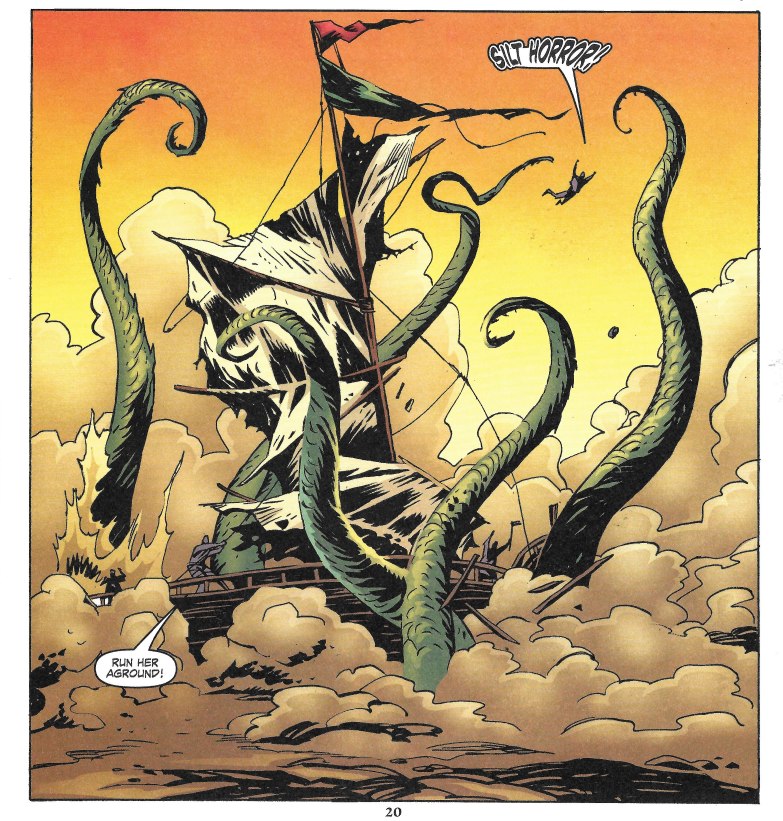 …takes the entire ship apart leaving Grudvik and Aki the only survivors. We end on their sniping banter as they walk off into the sunset toward Tyr and adventure. 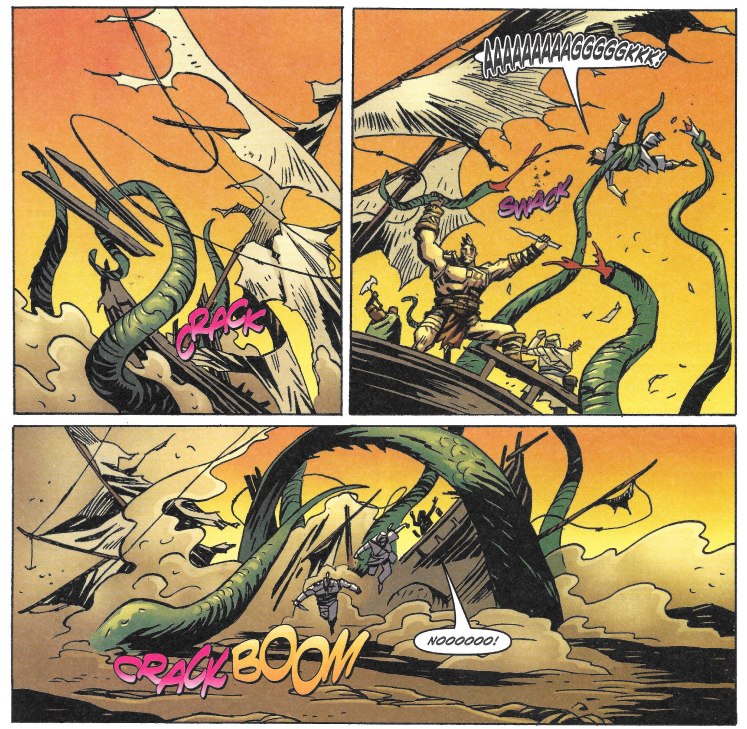 It's a good start to a series and worthy of the Dark Sun books that I gushed about in the beginning. I enjoy the characters and feel that when one or both of them die I will miss them. And of course they are going to bite it eventually. It's Dark Sun. Haven't you been paying attention? 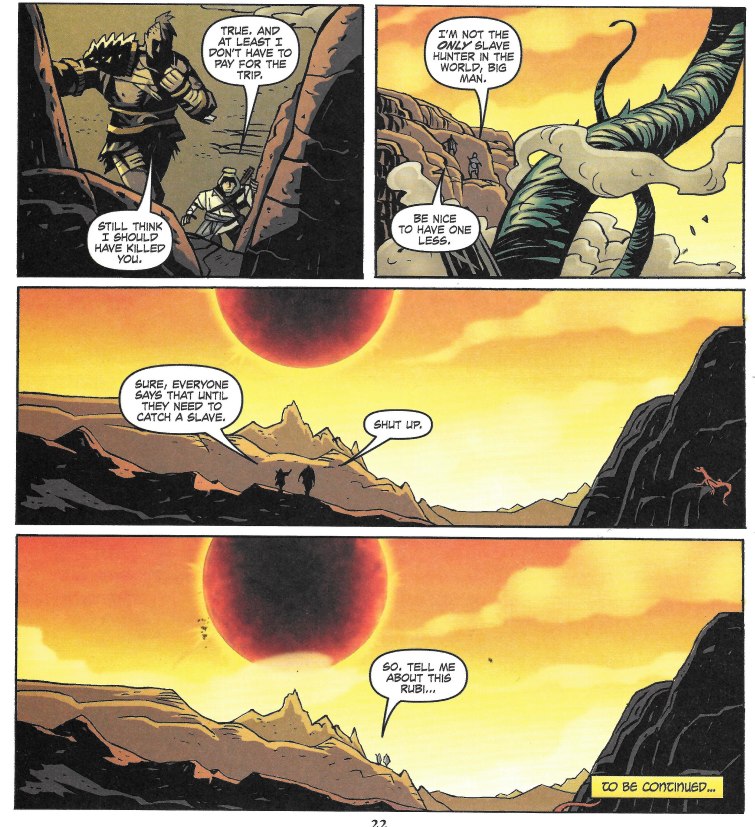 Shame it only lasted five issues, but better that than the concept running stale, I suppose. It is an acquired taste. Look for them in a discount bin near you.
Posted by SonOfCthulhu at 2:31 AM