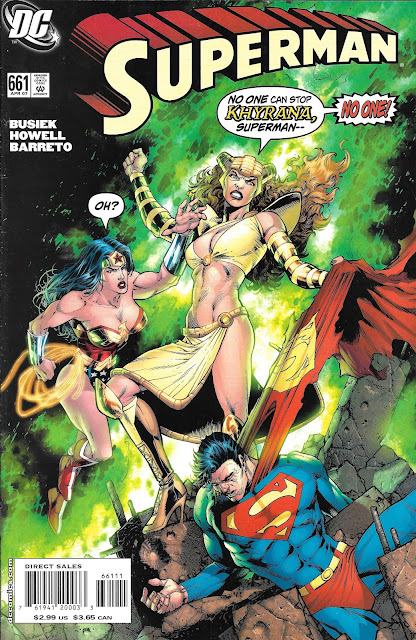 Because sometimes Supes isn't so Super

THIS is the type of team-up I want to see from Superman and Wonder Woman. I'm not in the "they should be together romantically" camp.

I feel that most people who go in for that type of Superman-Wonder Woman story really never look much beyond the superficial aspects of their power set. Sure they both can fly and are super strong. However Clark and Diana are not exactly cut from the same naïve world view.

Diana doesn't know much about Patriarch's World, a society that Clark seeped in the values of because he grew up in it. Her natural instinct may lean toward peaceful, compassionate outcomes for her conflicts, but her Amazon heritage and training grounds her in a warrior's mindset when in battle. As Maxwell Lord found out the hard way, back Diana into a corner and she's a solider as well as a superhero. Clark will always try to find a non-lethal solution up to and including letting Aliens facehugger him.

I believe there would be issues between them after a bit.

Not that those wouldn't make interesting stories. I believe they would, however I would much rather see stories about Diana like the following one from noted scribe Kurt Busiek.

Because you see, Diana is quite frankly a … 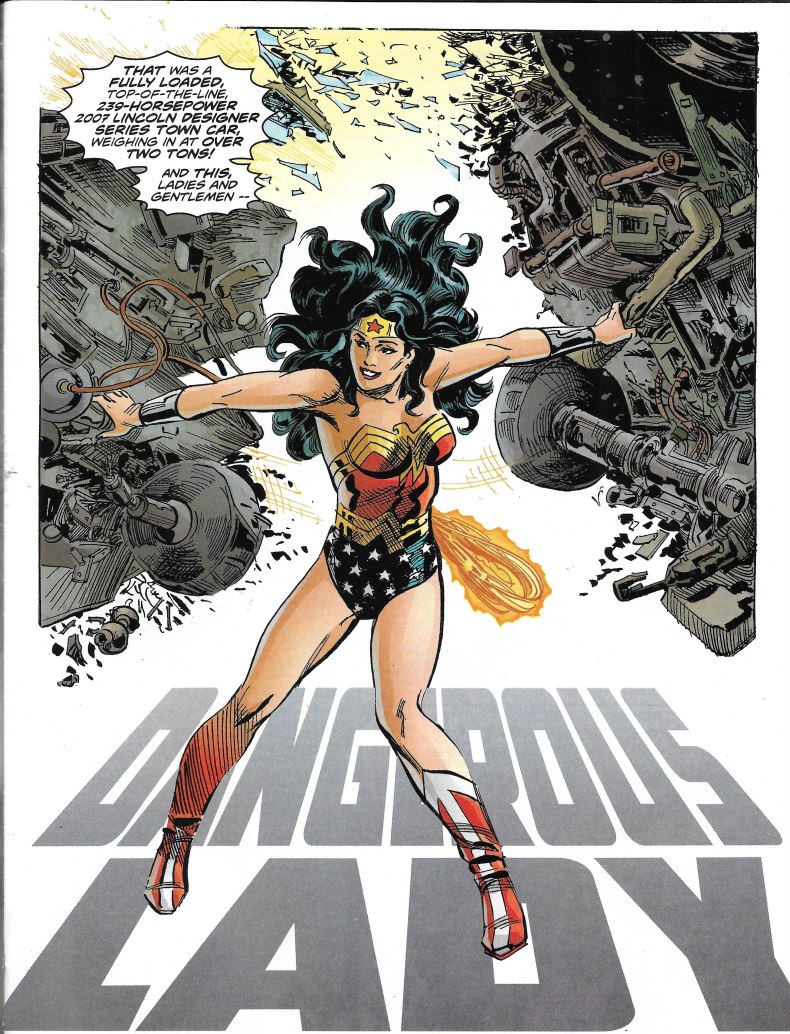 A dangerous lady who can rip apart a car in front of an arena full of people for the benefit of a local charity that helps battered women. There's a theme in the background here, but I'll let it percolate for a bit. 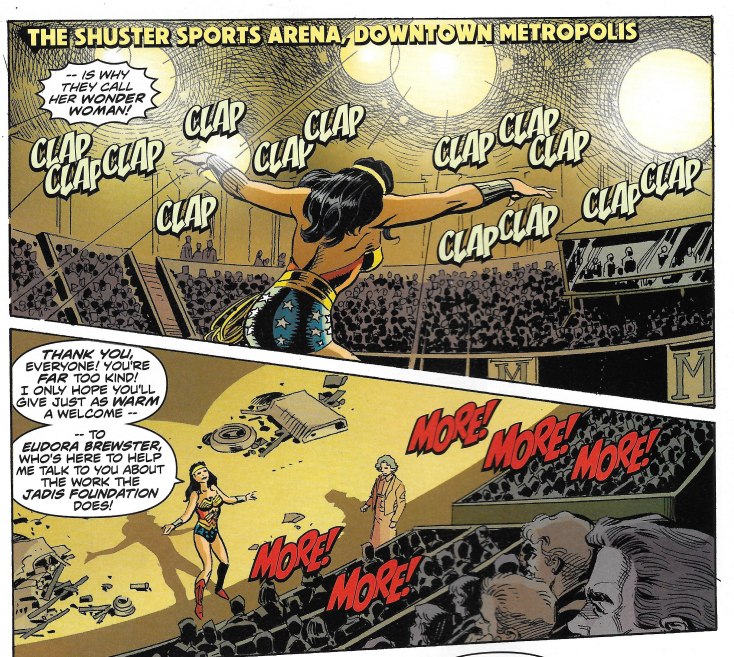 And since we are in Metropolis… 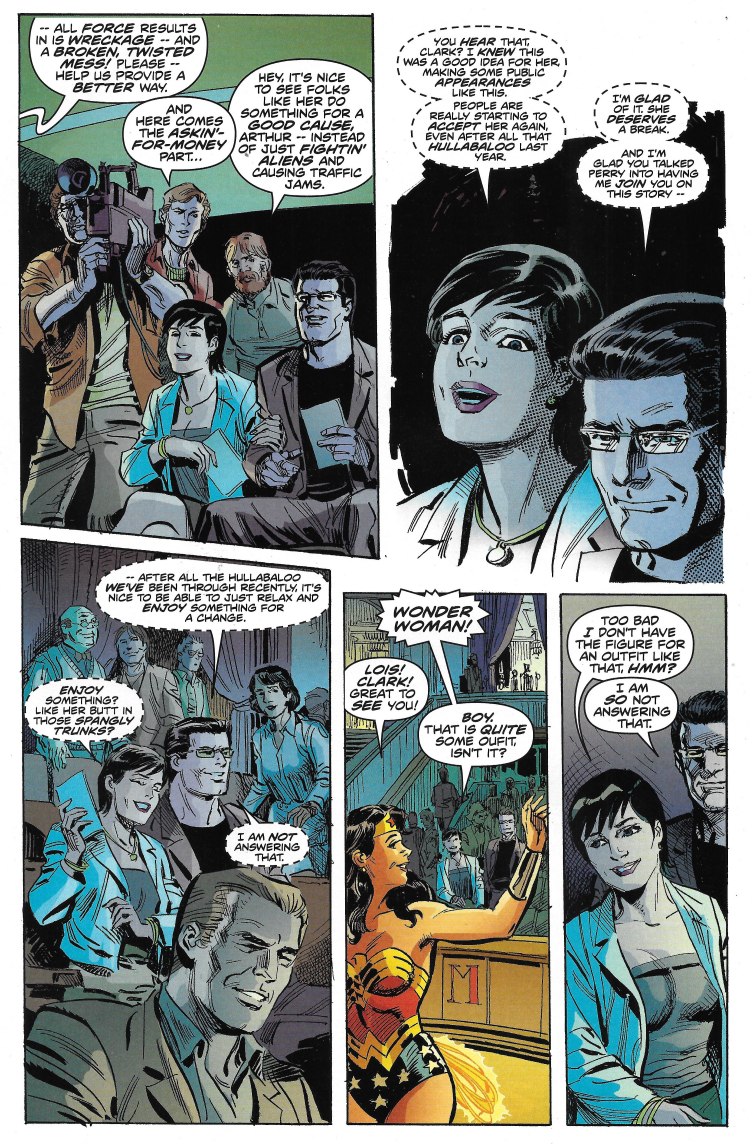 Lois and Clark wouldn't miss an event like this for the world. Plus it will give these three some much needed social time, which is something they don't get to do because they are always fighting aliens or causing traffic jams.

I love the natural banter and good-natured ribbing between Lois and Clark. That is something you only get from couples who know the grass may look greener over the other side of the fence, but they really love THEIR grass. That metaphor might have gotten a bit lost in the weeds, but I'm going to let it stand.

Love the questions Lois throws out about how Wonder Woman looks because we can tell it isn't coming from a place of insecurity, but she is just needling Clark. And Clark's answers shows he is in on the joke. It feels very authentic to me. 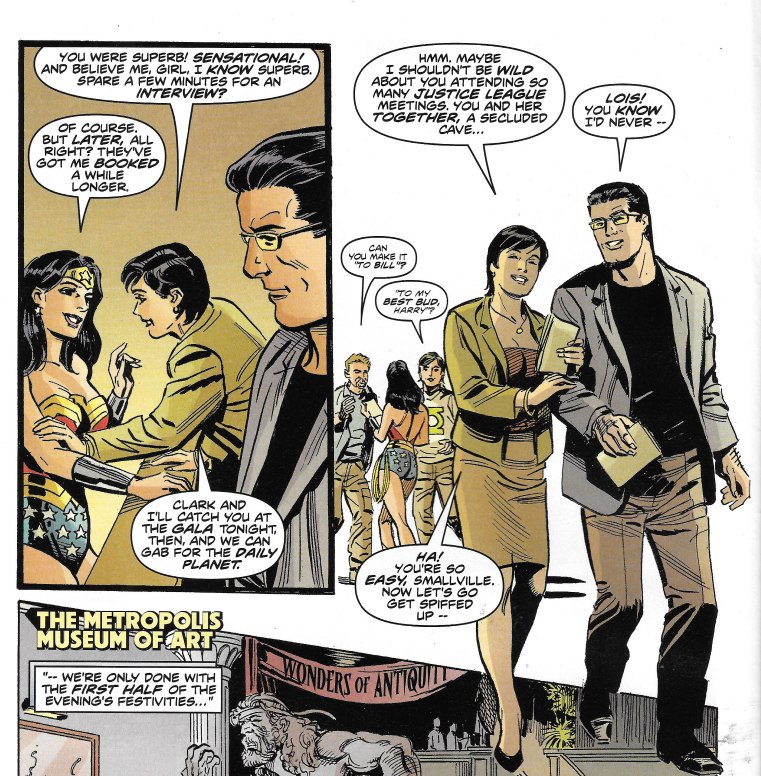 So later the trio attend a museum gala to benefit charity. All are in their civilian identities, with Diana hiding behind a pair of rose tinted glasses, which is a cute take off Clark's own disguise. They stroll around the Greek antiquities and Diana gives Lois her story material. 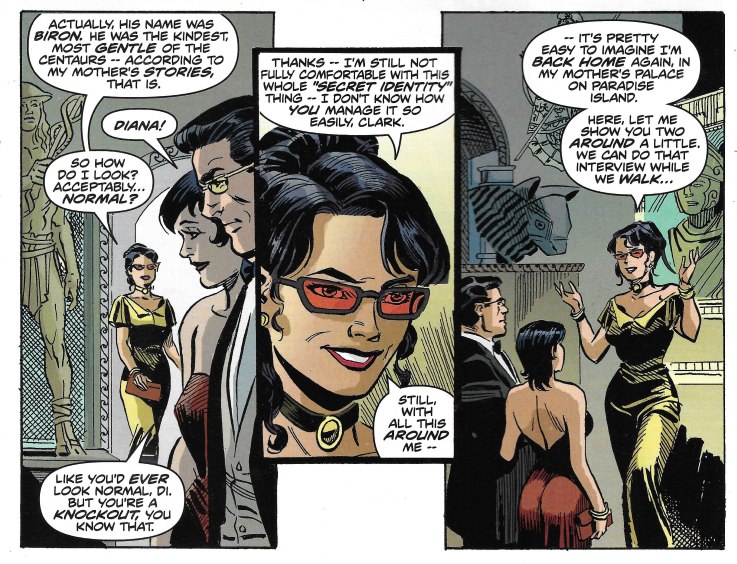 When suddenly this crazy lady, who is actually one of the museum's benefactors, shows up and starts taking back pieces of her collection…in a rather unorthodox manner. Clark moves to obstruct her destructive impulses… 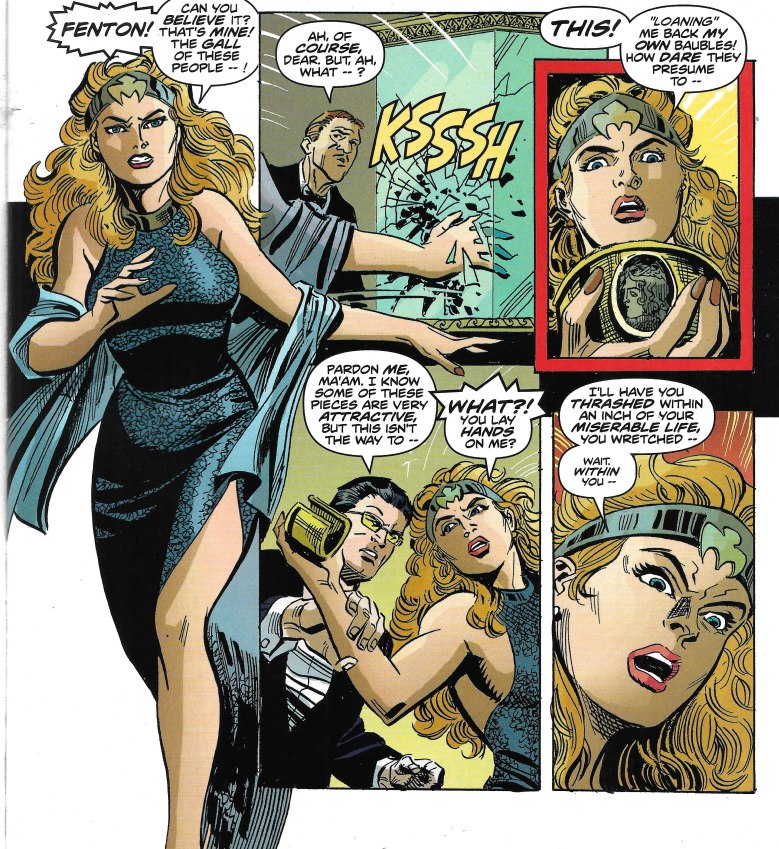 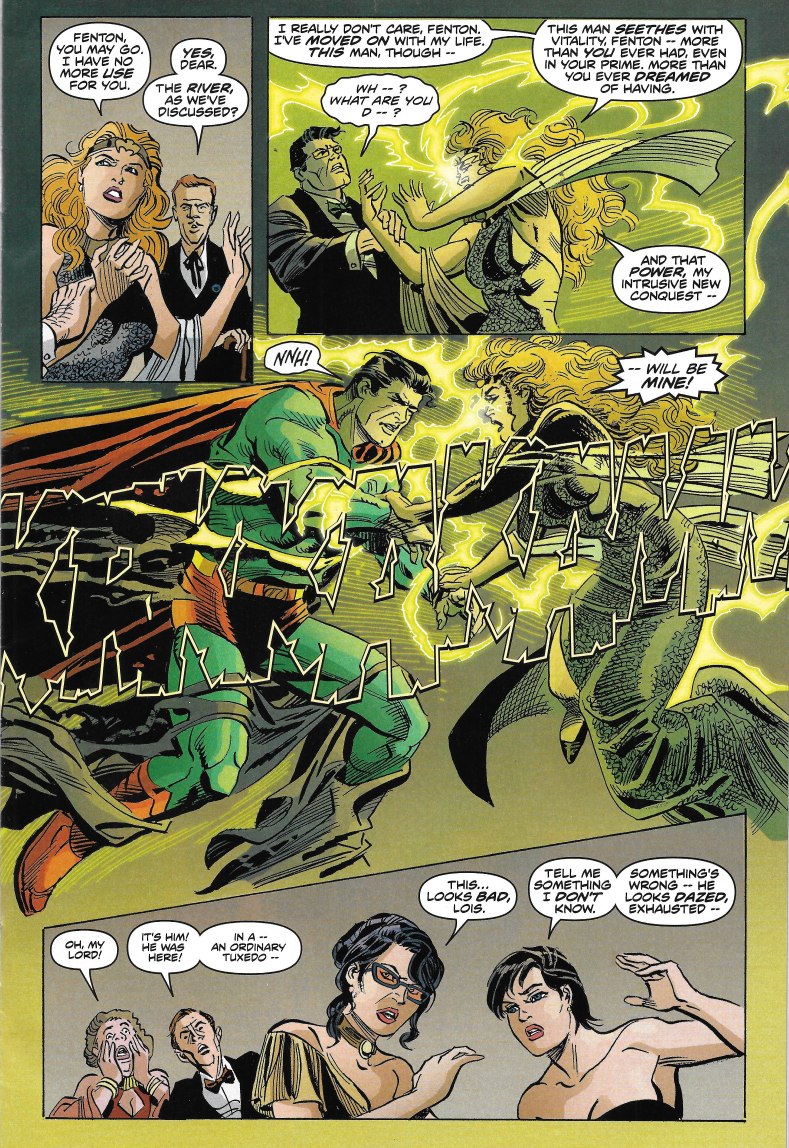 …because she uses some kind of magic power to drain him and expose his costume. Here's the thing about Diana too, most of her enemies are magic based. That makes a relationship with Clark, even a working one, a very dangerous proposition. She'd spend most of her time rescuing him. 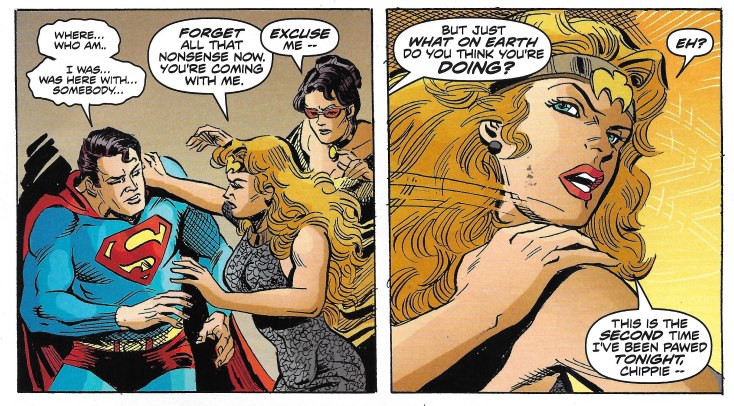 And speaking of rescuing, this lady looks to take Superman with her and he appears to drained by her touch not to say no. Diana moves to block her escape and… 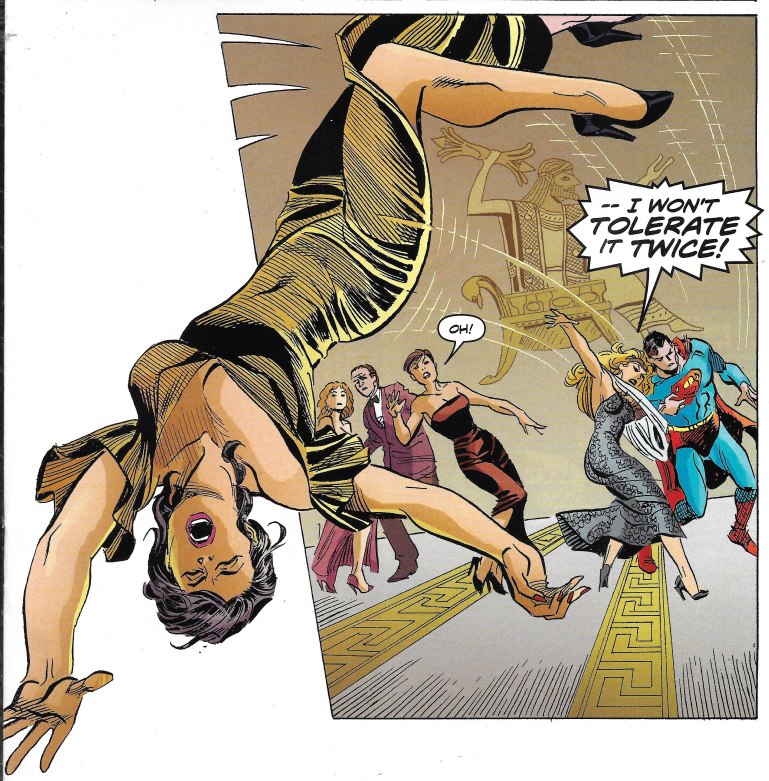 …appears the woman keeps the strength she drains as her own.
Lois moves to help Diana up from where she cracked the wall and to allay any bystanders' eyewitness accounts of the ordeal. By the time Wonder Woman and Lois make it out the door, the mysterious woman has vanished with Superman in tow. 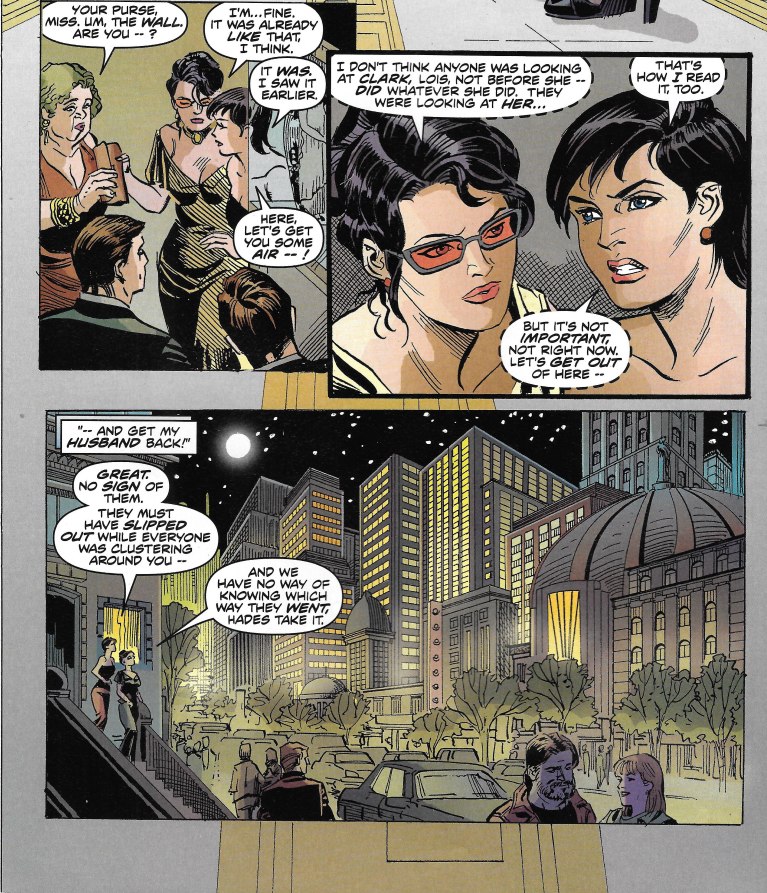 While the ladies walk back to Lois's apartment, Diana realizes the woman's real identity… 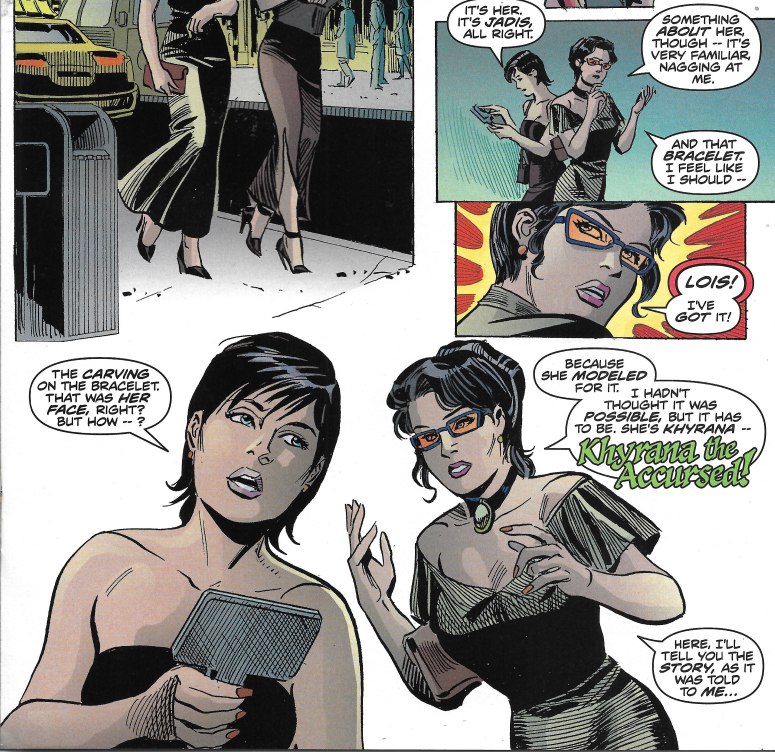 and tells the reporter the story. 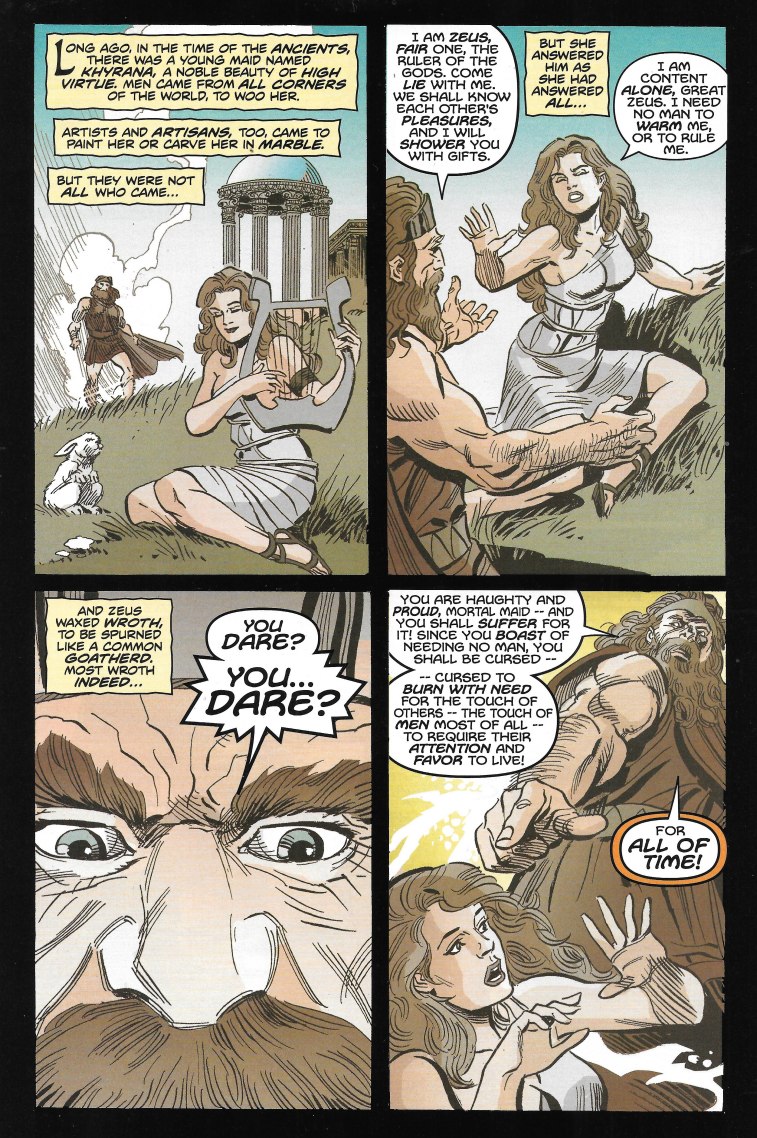 So again it is Zeus not being able to keep is peter in his pants. The horndog of the gods curses Khyrana and she is doomed to need the touch of a man forever. Doesn't sound so bad. 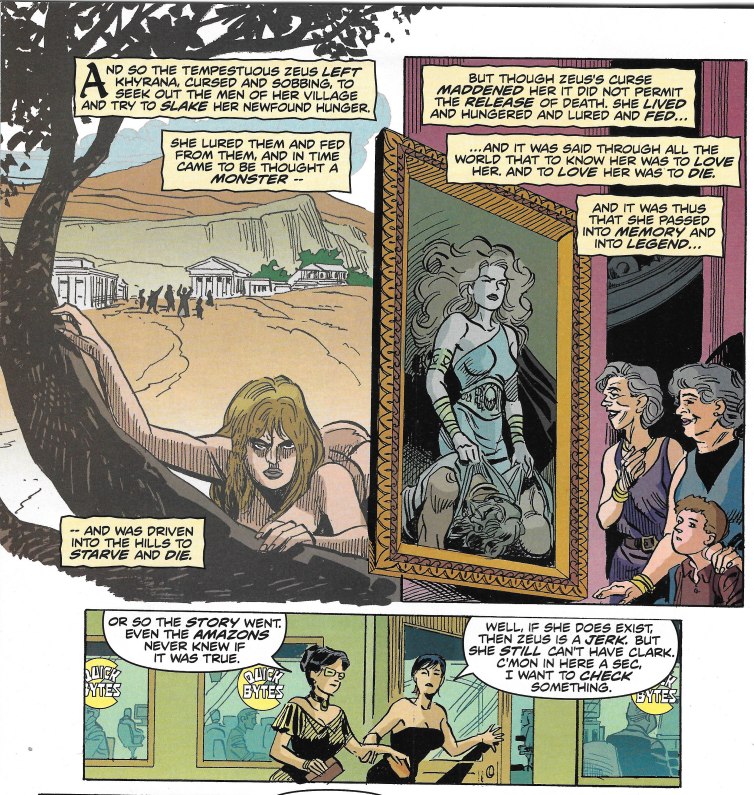 Except the part where she starts draining the energy from the men she is with due to Zeus's curse just to stay alive. Lois has a hunch and ducks into a cyber café, which Diana appears confused by the concept of a "computer cafeteria." Using the computers, Lois uncovers Khyrana's secret identity. 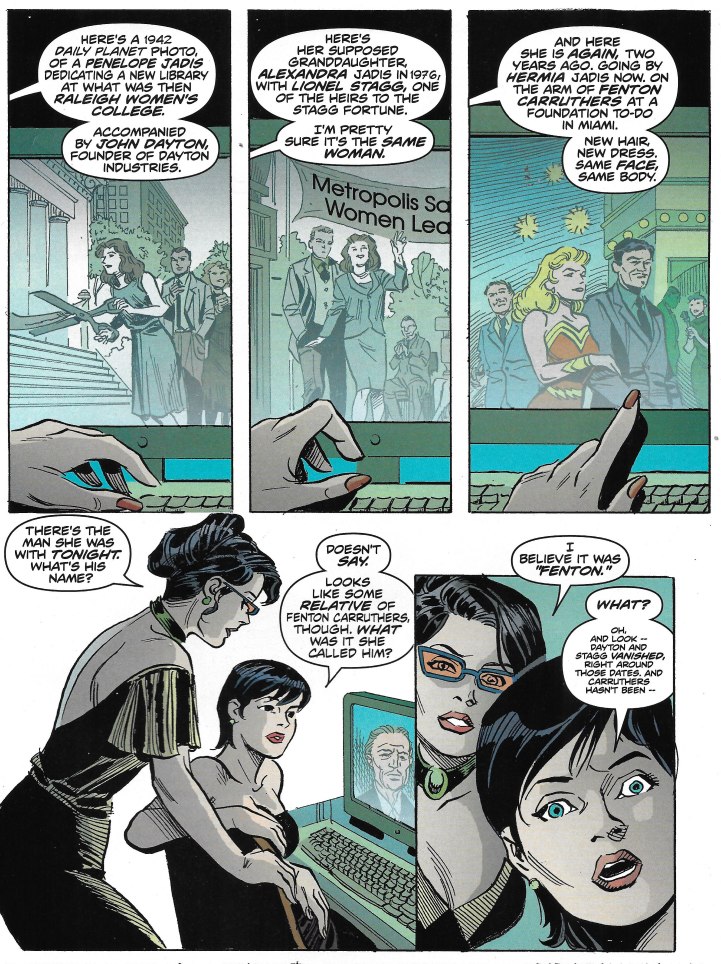 They both become suddenly very concerned about Clark. Wonder Woman flies ahead while Lois calls in the boys in blue. Diana doesn't wait however, she bursts through the door to find… 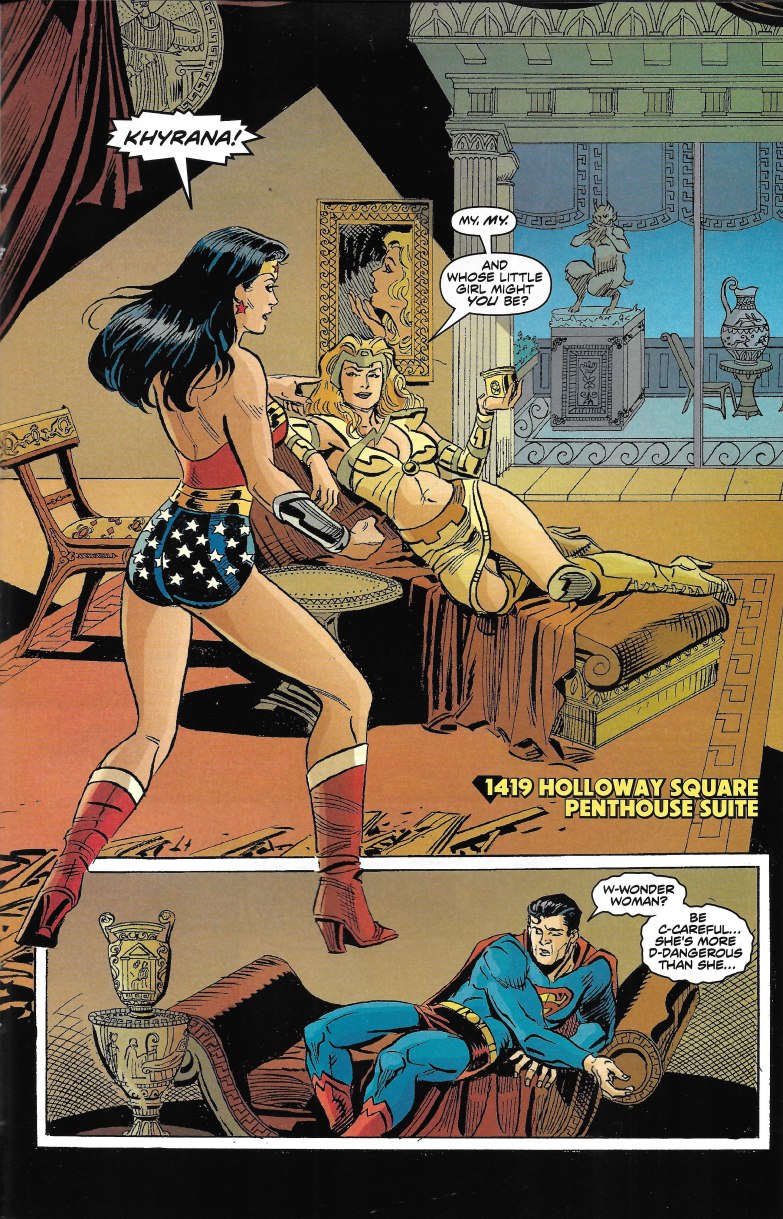 Supervillain lair number 152: Greco-Roman style penthouse. Love that Superman is more concerned for Diana than he is for himself. Look at him being so gallant and selfless.

Khyrana explains she plans on keeping Superman, who at the level she's drained him should be in a coma, but is still strong enough to speak against her, even if he can barely move. She even slights Diana's outfit. 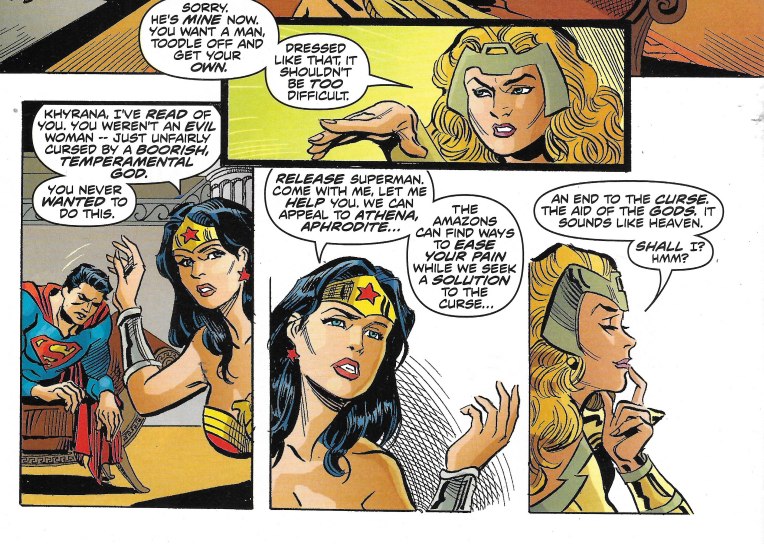 But that doesn't stop Wonder Woman from giving it one more try. She attempts to reason with Khyrana… 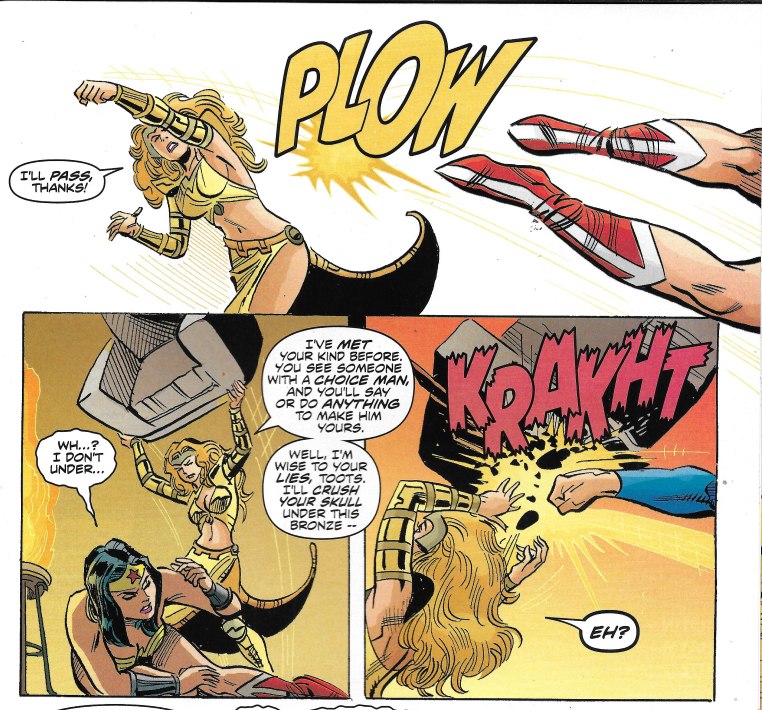 …but it doesn't work. Appears she likes draining men, and Clark more than most. Without the first round bell dinging, we have a cage match going, with Khyrana resorting to throwing a chair right off the bat. However Wonder Woman gets an assist from her partner… 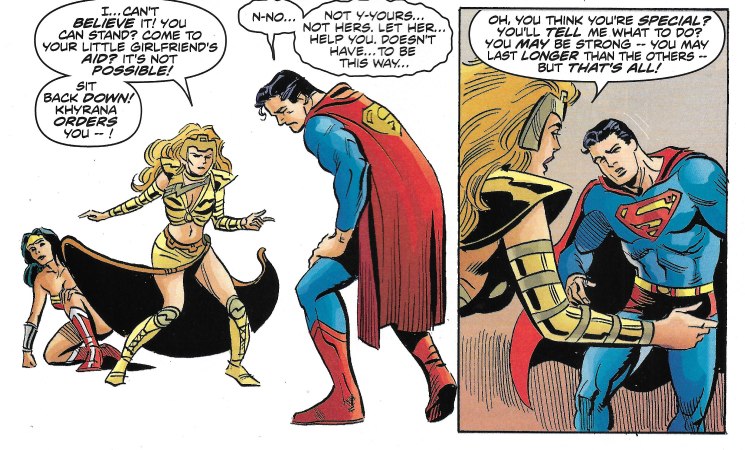 ..a barely vertical Clark. Who is defiant enough to want to decide his own fate in this. Khyrana starts throwing punches that Clark can barely dodge while she lets off steam at the idea of being with a man who would "rule" her. 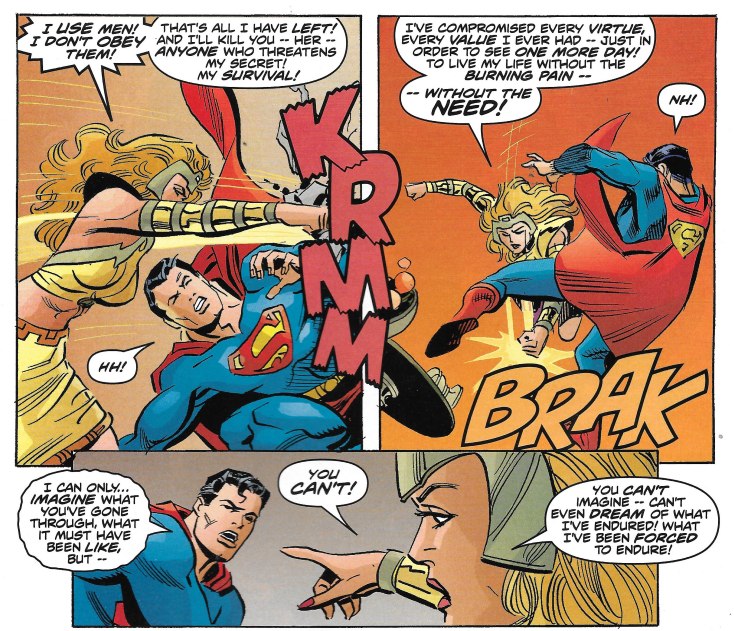 We quickly get a feeling that Khyrana is a bit of sympathetic villain. She has done monstrous things to survive, but in that way she is also filled with a very human self-loathing. And again we have a villain that is more in need of compassion and not just being punched unconscious. 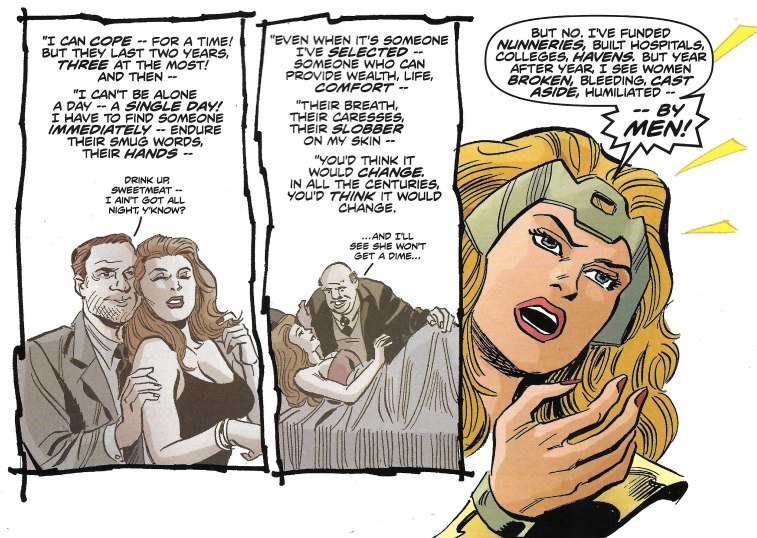 Zeus is really a bastard, is all I've got to say. This woman might never have wanted to be with ANYONE, but that is her choice. His curse was overly cruel and completely unjust.

If this were a Wonder Woman book, she would talk Khyrana down and they would work this all out. Instead… 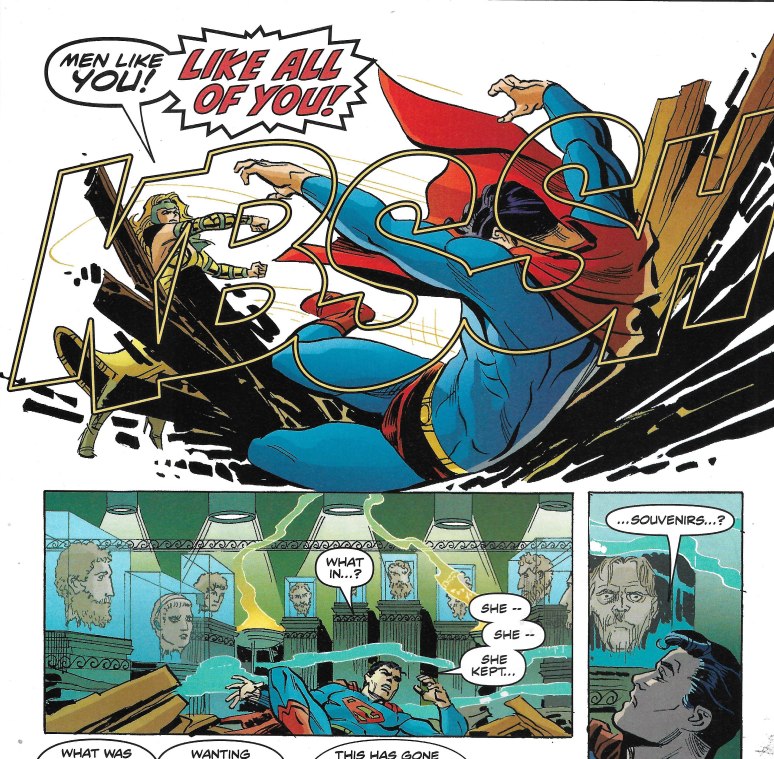 …Clark finds she's keep the heads of her victims as a kind of odd sort of trophies, and out the window goes all that goodwill gained in the last two pages.

Wonder Woman tries to restrain Khyrana again, but instead gets the draining touch. She threatens Superman, who intervenes only to find himself in her grip too. Khyrana decides to drain BOTH of them and take out the two threats at once, unfortunately this doesn't go as planned for the vile woman. 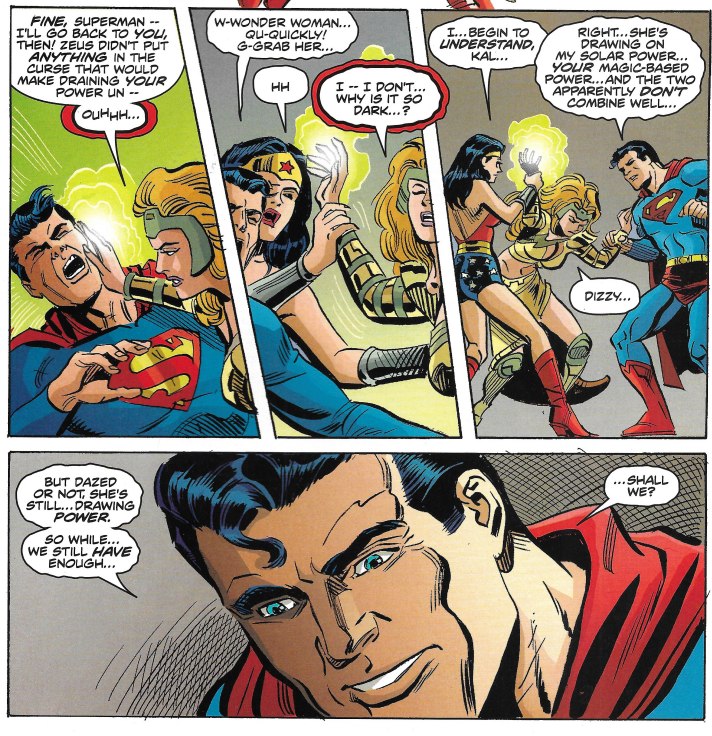 With Khyrana being the one feeling faint now, the two heroes join forces and with one blow… 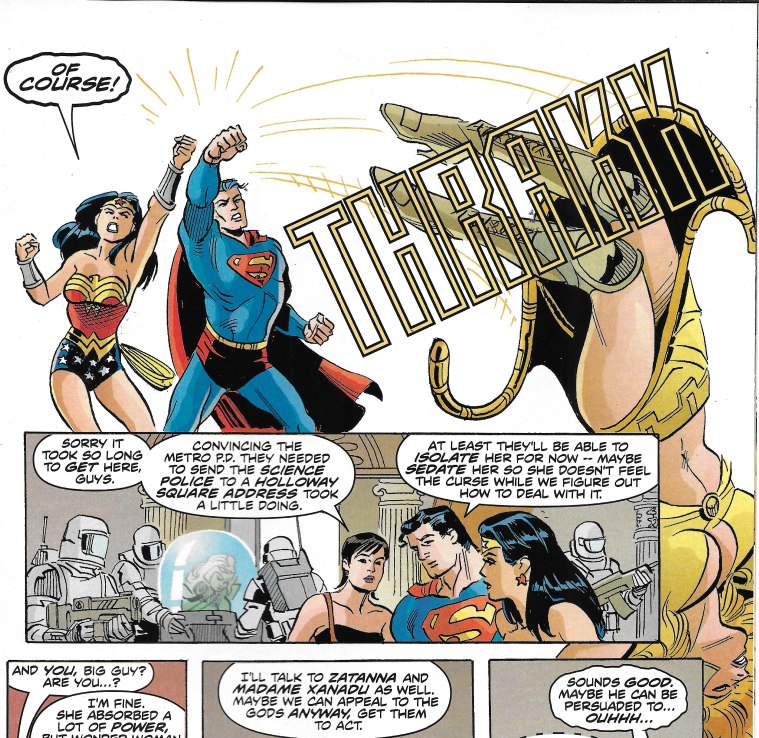 …lay her out just as Lois and Metropolis' finest show up.

All three head back to Lois and Clark's apartment, which gives us this cute little end scene. 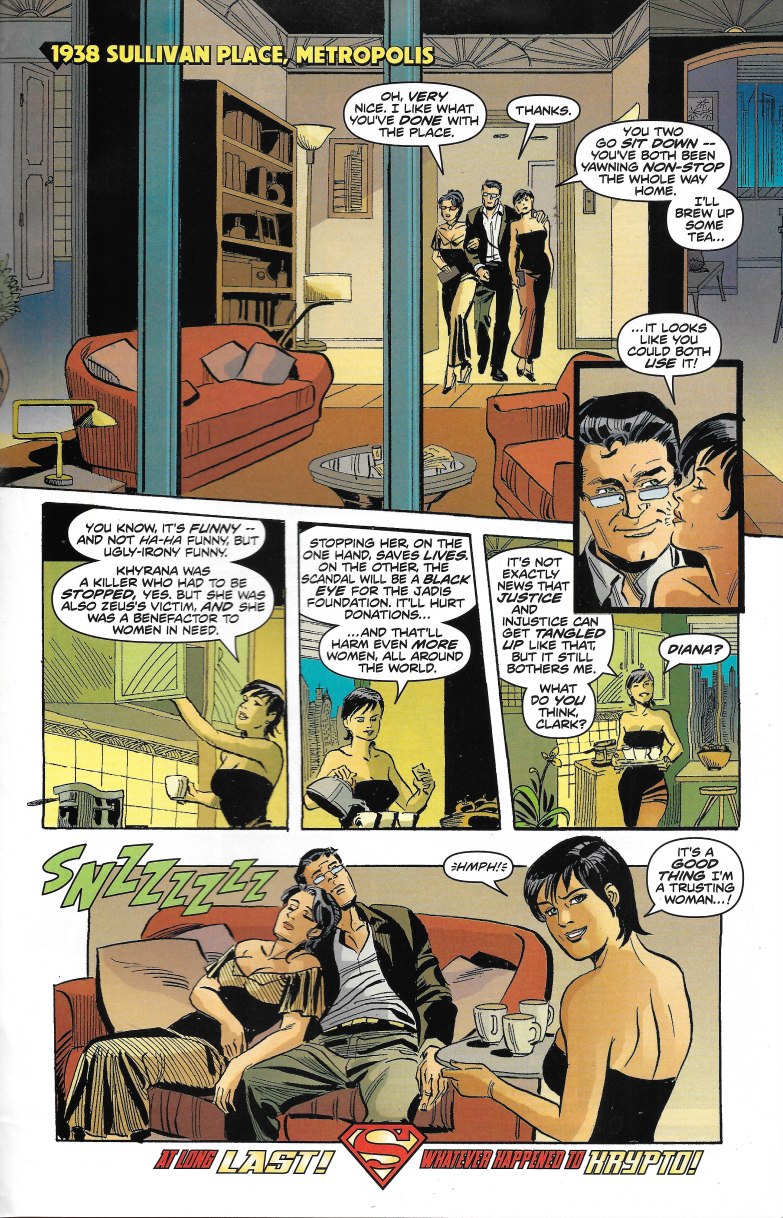 I liked the story and the art had some really great moments (that splash page opening is dynamite.) However, I'm saddened that we ended another villain by punching. Remembering whose book this is takes much of the edge off that criticism.

Superman and Wonder Woman appeal to different audiences in that way. And there, yet again, is another reason to allow them to work together and even play together, but to not ball all that up into a super-romance story.

Have fun at the movies! The Crapbox will be back on Monday with MORE Wonder Woman books. We've barely scratched the surface.
Posted by SonOfCthulhu at 4:36 AM