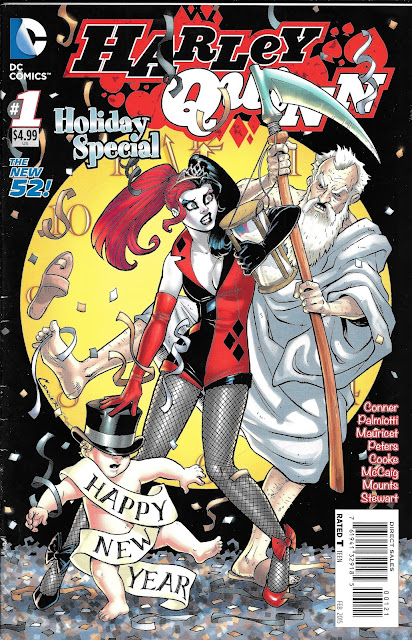 What is this book about again?

When I plucked this issue out of the Dollar bin, my first thought was: Christmas review. I mean, the front cover says Holiday Special, so I just went with it.

Then on first read-through I realized: I have no clue what a comic with Harley Quinn would even be about. My complete knowledge of the character stems from one source: the Bruce Timm Batman: the Animated Series. Well that and seeing her cosplayed every-freak'n-where.

But to me Harley, the character, is a psycho who loves the joker and helps him commit homicidal actions. She isn't someone I could see an ongoing series developed around because her past actions are one of a villainess. She is supposed to be evil, right?

And the answer in this "New 52" version is less evil than just anti-heroic. She doesn't murder people (or at least doesn't do it in panel) and her adventures in this book seem almost Archie magazine caliber. This isn't a villain of the week book. It is a teen relationship mag dressed up with a cosplay icon.

Her adventures are comedic riffs on situational comedy that play to a Archie-age crowd that are bit morally twisted. This isn't a superhero book. It's a sitcom about a bratty loudmouth with a heart of gold. And part of me find that so odd given the inspiration for the comic book Harley.

Don't believe me? Here we go with tale one of the three and the only one I'll be reviewing for part one. Our dilemma? Too many animals. 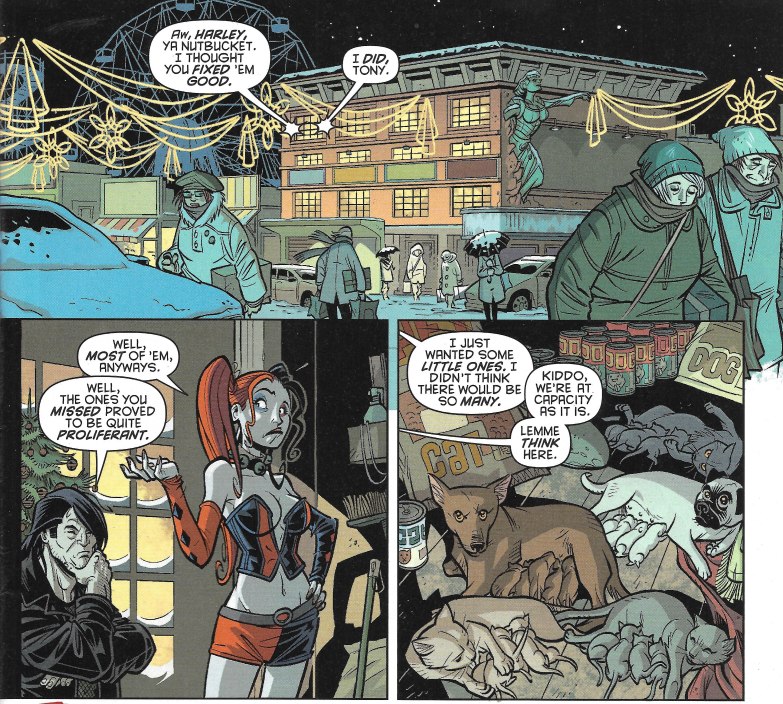 No, seriously. That is what drives the story. She has to get rid of dozens of puppies and kitties. Remember that Timm episode where she almost killed Batman? No? Did I dream that one?

What I’m saying is this is a drastically different character. She isn't REALLY Harley. The comic book (or at least the 52 version) Harley looks to be gentler and have no homicidal edge. This happens plenty of times when a villain character bridges over to a starring role and writers have to tone down the more anti-social aspects of their nature. 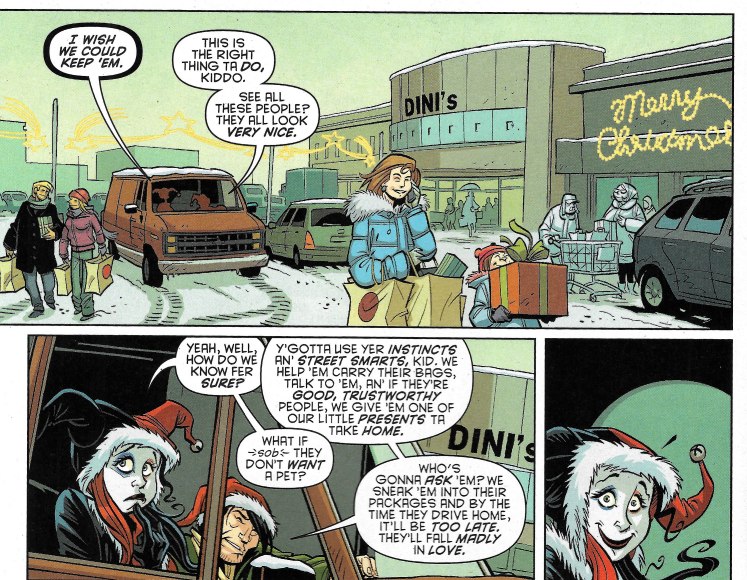 Anyway the conflict at the beginning of this tale is resolved by Tony and Harley handing out the animals to unsuspecting people at the shopping mall, figuring by the time they get home they will be in love with the critters. This is like a Brady Bunch idea but we go with it because why not? This isn't going to turn into a Batman: the Animated Series book no matter how hard we wish. 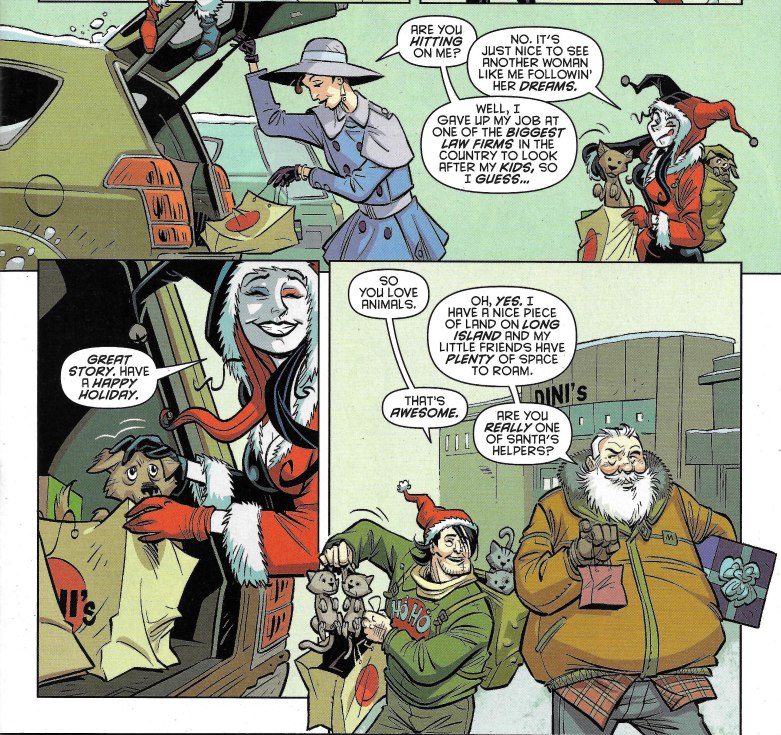 They have good luck with almost everyone. 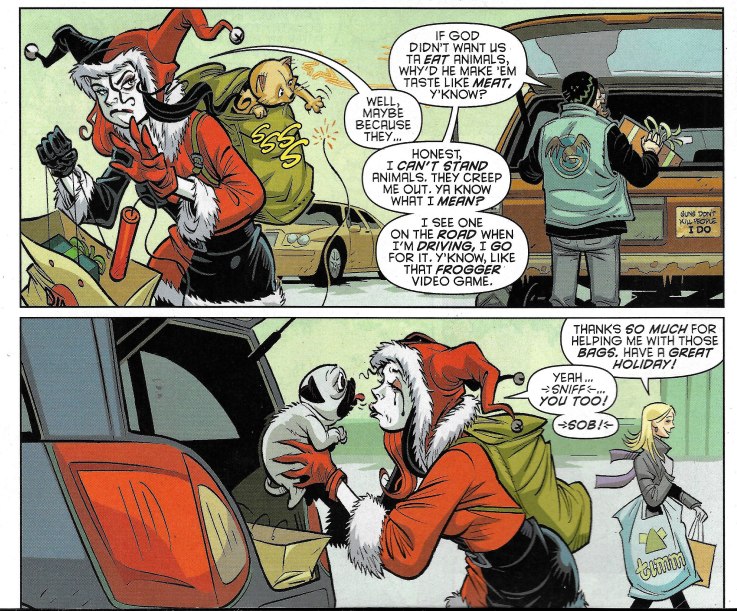 I mean there are a few bad apples (note this is a "comedic effect" stick of dynamite), but it mostly goes off without a hitch, although Harley is really taken with this last pug puppy.

Which is the driving impulse for the rest of our tail..er, TALE. 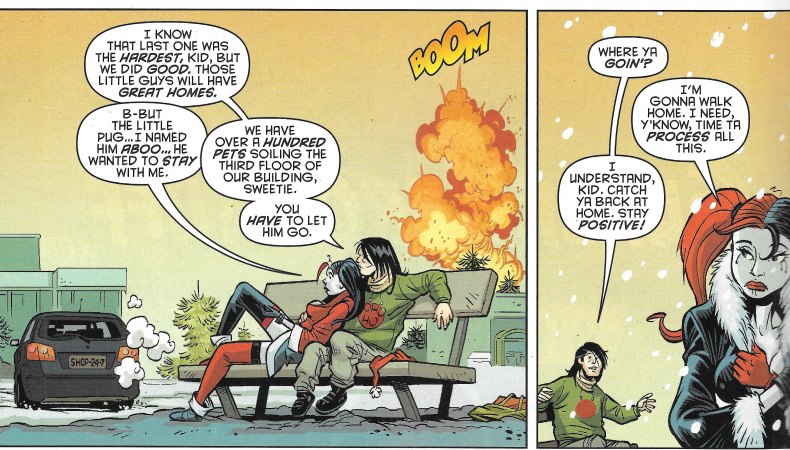 Seems Harley misses the little Aboo critter too much. 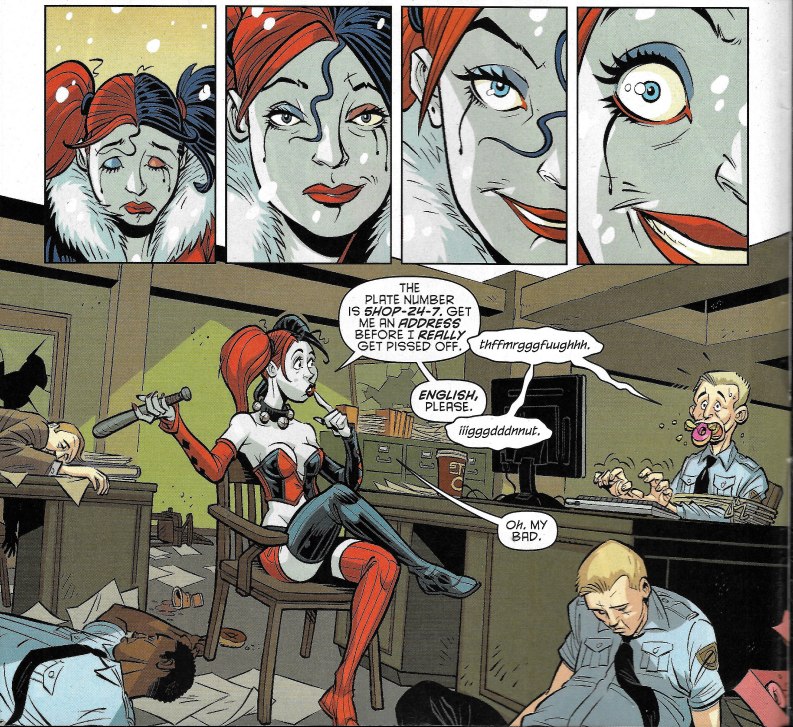 So much that she hatches this insane plan to find out where the lady lives that she left him with: she beats up an office of the department of transportation to learn the address. This part involves some obvious butt kicking but no fatalities. Again, they have to soften her character. 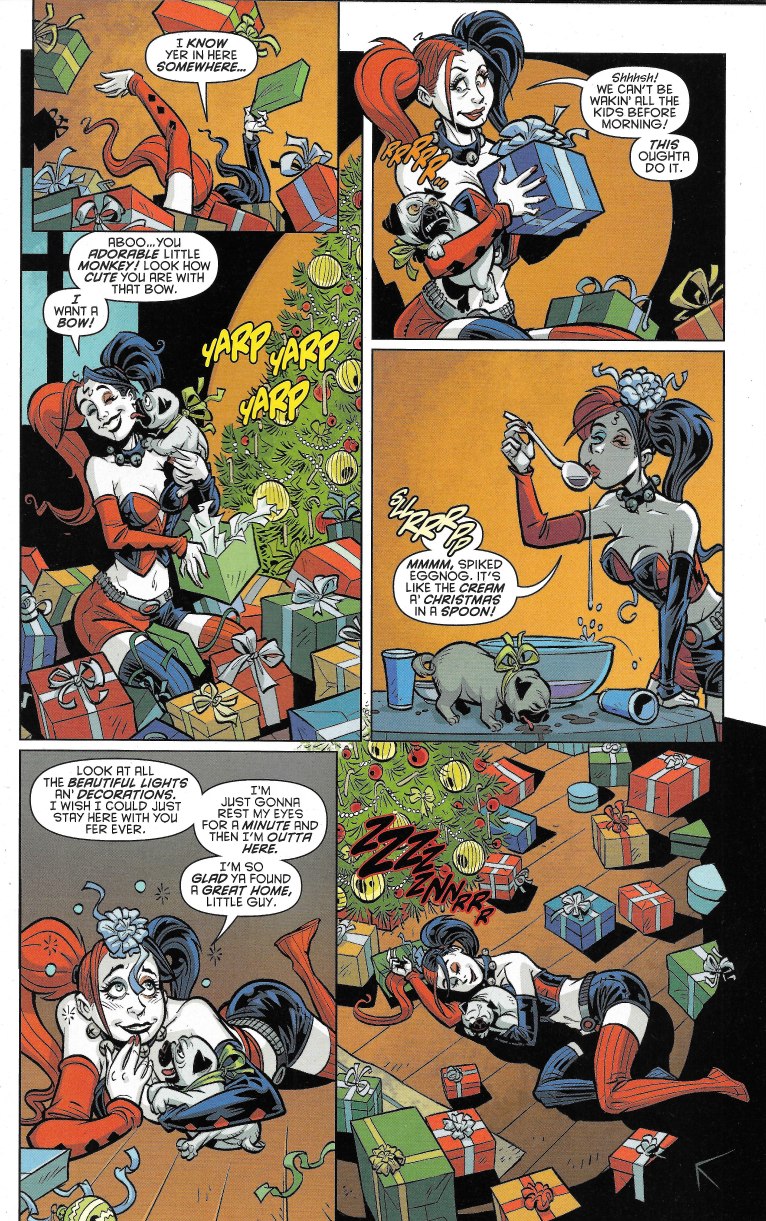 Harley steals a car and breaks into the lady's house and falls asleep on the floor next to Aboo after a few montage panels of misdemeanor mischief. 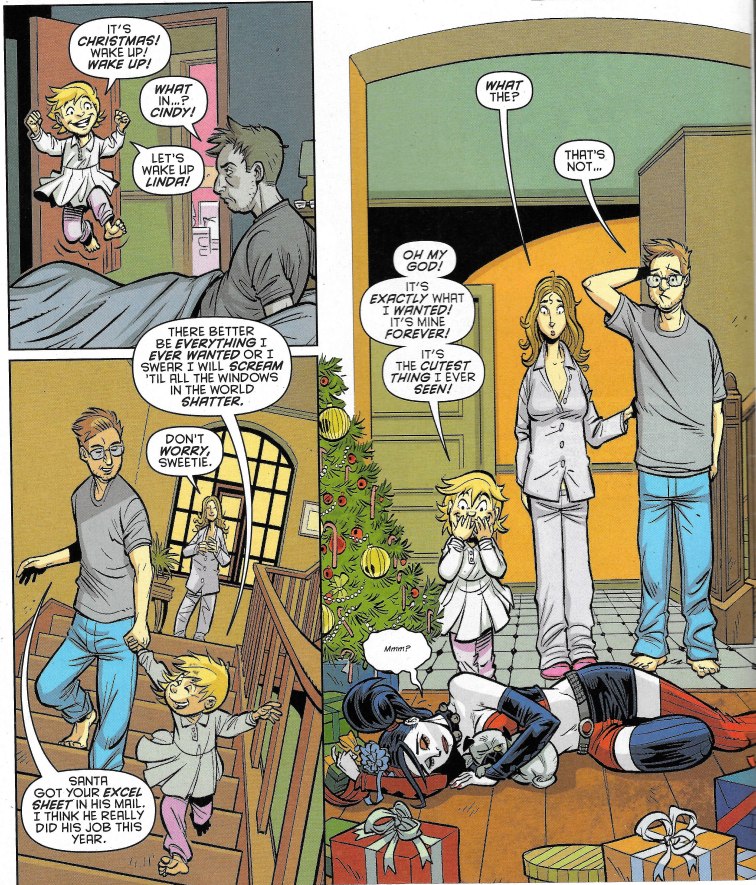 In the morning, the couple's young daughter Cindy awakes and acts kind of a pill if you ask me. (and you should) Once she spots Harley, Cindy acts like the young criminal is her present. We all know that isn't the case. 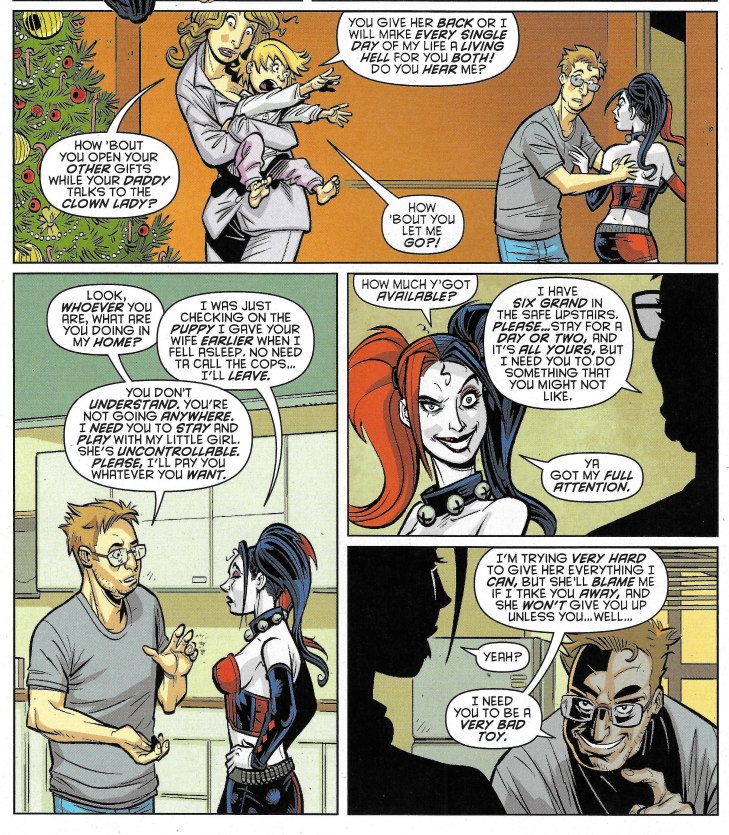 Yet because of some weird coincidence we end up with the plot of Richard Pryor's "The Toy". Harley is asked to make the kid hate her in exchange for a big money payout. And Harley is all about that since it will allow her to pay for her pets to be fixed. 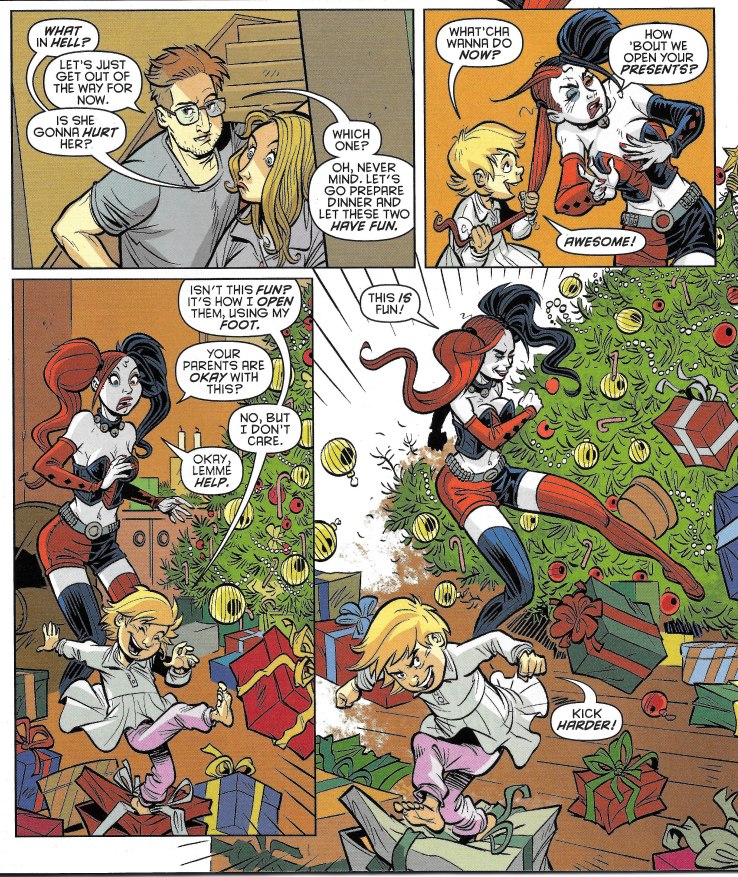 So this idea works for about two seconds because then the two of them are bonding over being so bad instead of Harley trying to scare the kid straight. 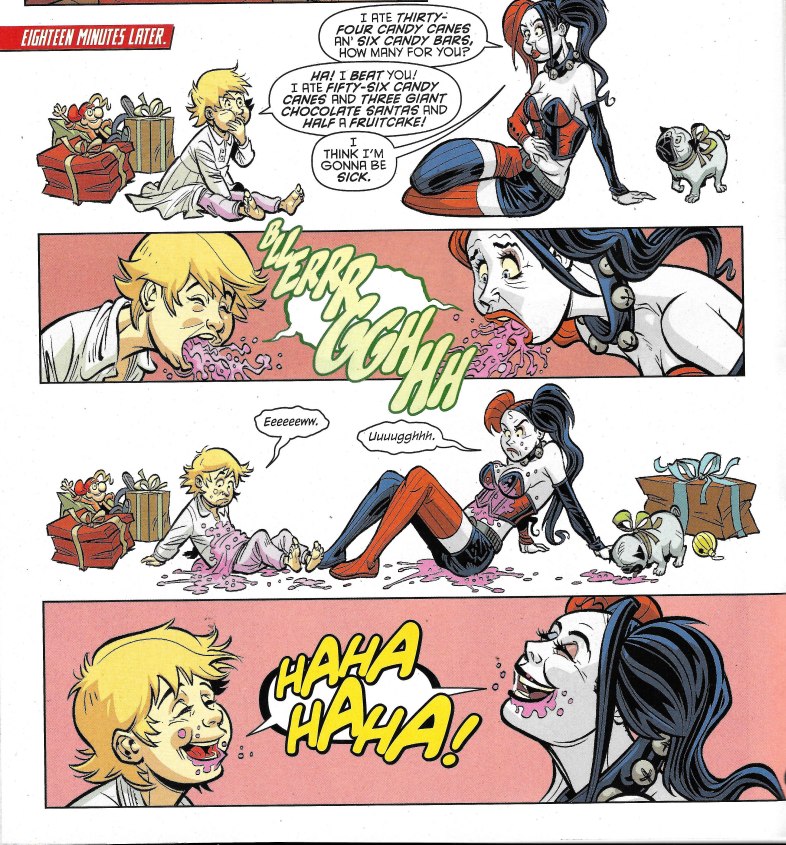 And who wouldn't bond if you and that person ate so many candy canes that you yacked pink goo all over each other? 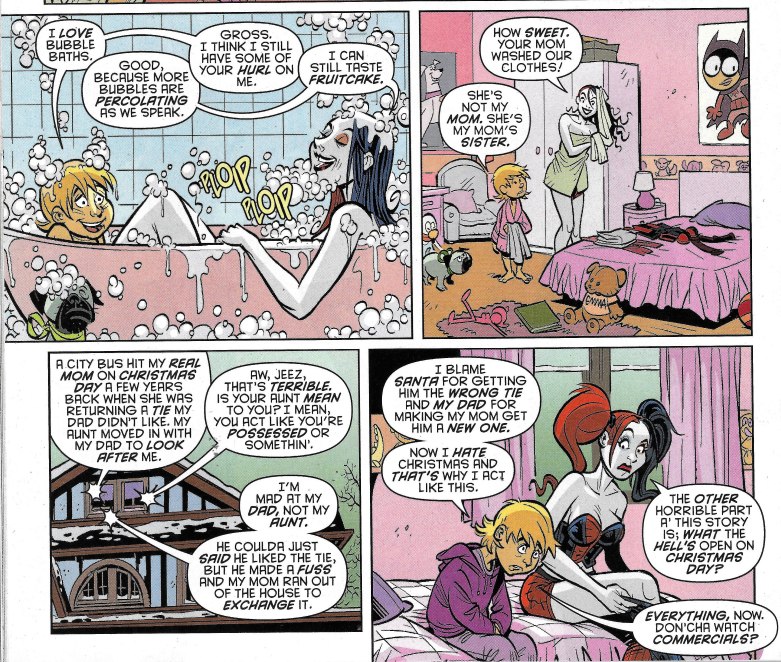 A quick soak in the tub together and they are besties and the horrible, terrible truth about why Cindy is such a holy terror comes out. And it is a real tear jerker. That tie bit is kinda hokey and I wonder if there isn't another REAL reason her Mom left on Christmas Day, but this has a bit of the ring of truth to it. If something was amiss, you'd probably use the tie story with your kid to cover up whatever the Mother was rushing out to see on Christmas Day. 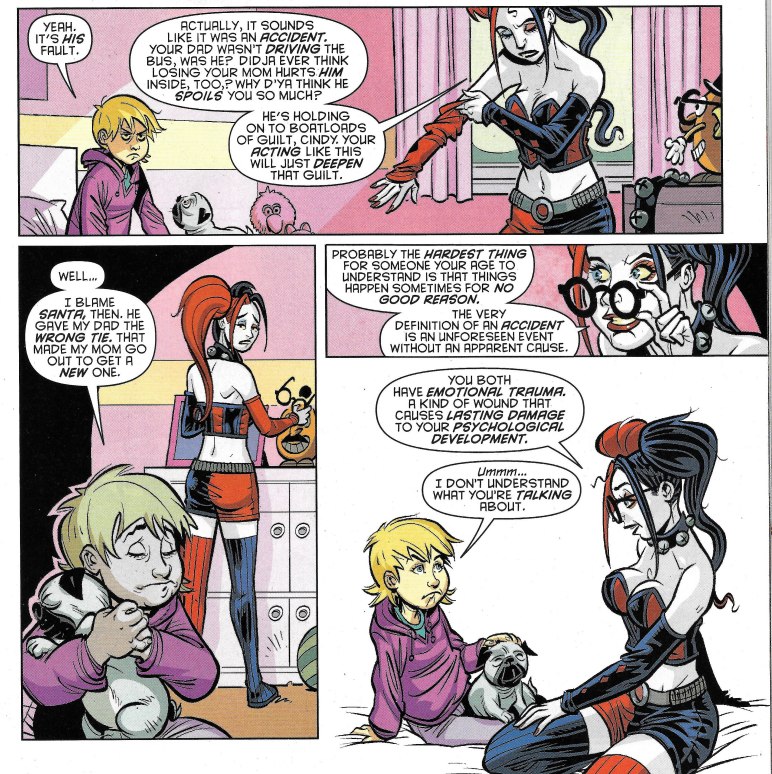 Harley comes clean to Cindy about her Dad paying Harley to be a bad toy. This next part is VERY neat though. Harley puts on specs from one of Cindy's toys and you slowly watch her transform from troublemaker in a hot outfit to the psychologist she once was before going off her rocker. It's a great sequence and worthy of a bunch of praise. 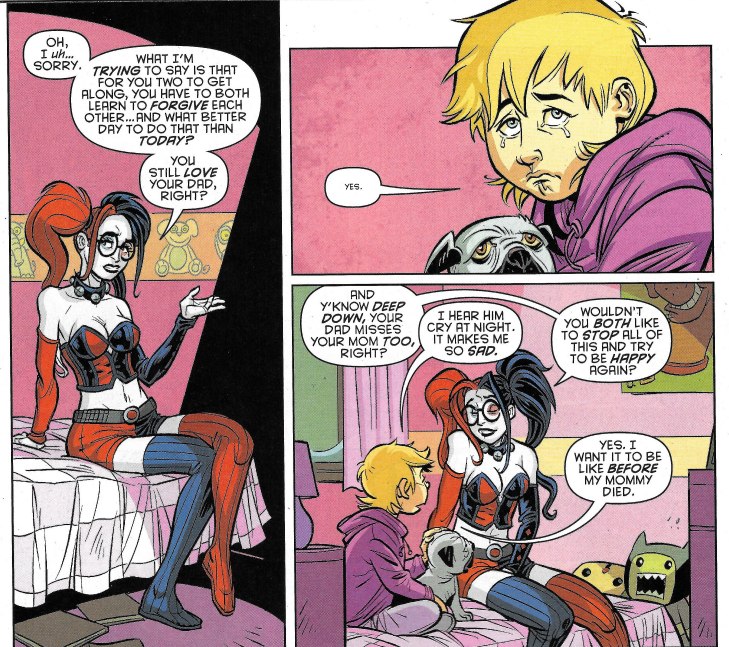 Especially since it works in a way that is logical and hits on an emotional level. Good job to the team of Conner and Palmiotti. Harley even has an idea on how to start the healing between Father and daughter. 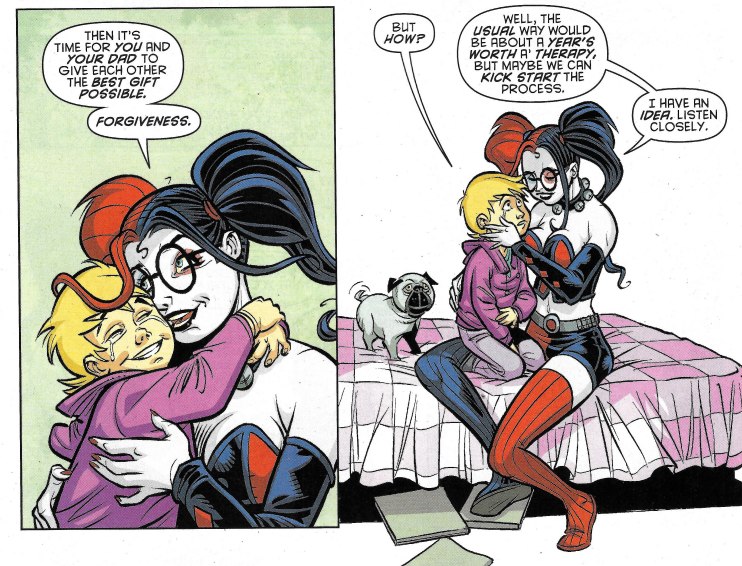 Unfortunately it means going just a bit nuts. Luckily she's up to that task. She might have told Cindy that it would involve deadly physical altercations though. 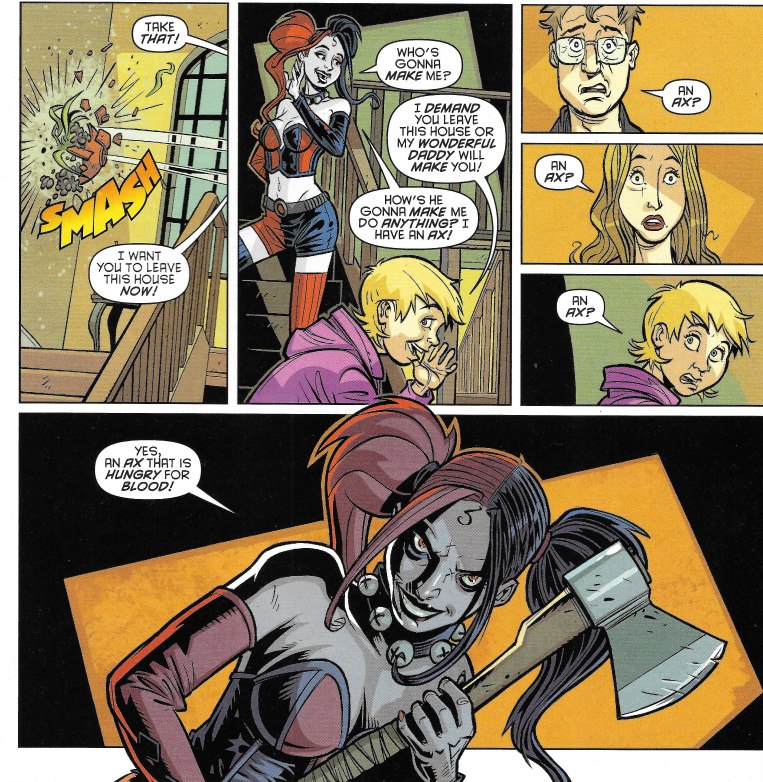 After a few deadly swipes… 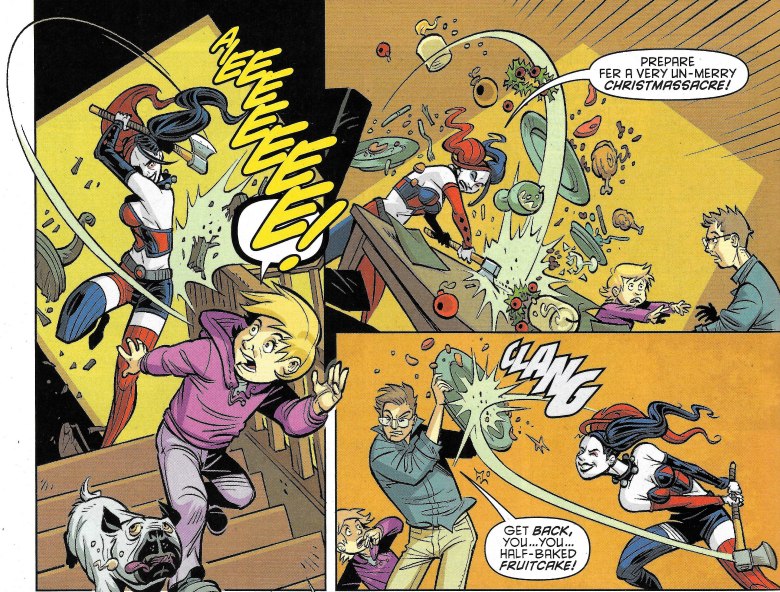 …Dad disarms Harley and sends her on her way. 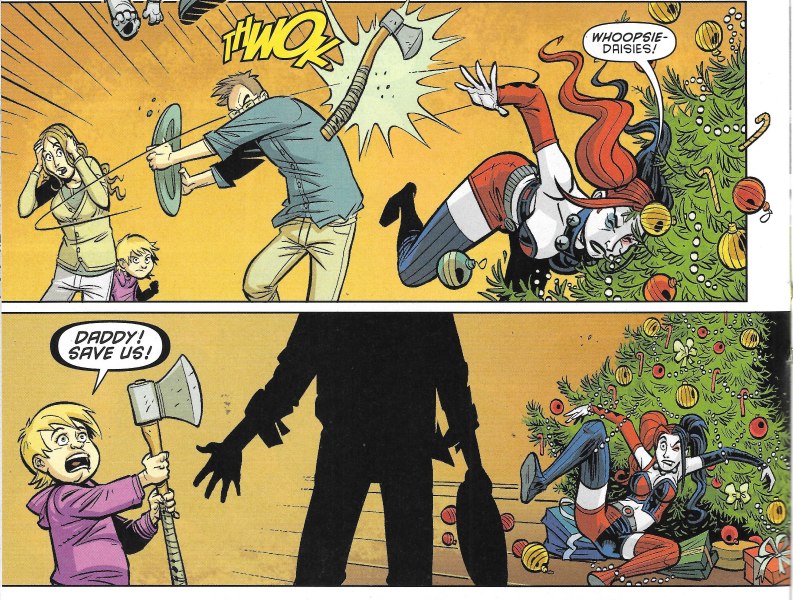 Then we get cute, heartfelt goodbyes from all involved and Harley heads back home. Again, this works for me. It is sappy, yeah, but no more so than a dozen Rom-coms I've seen and enjoyed. 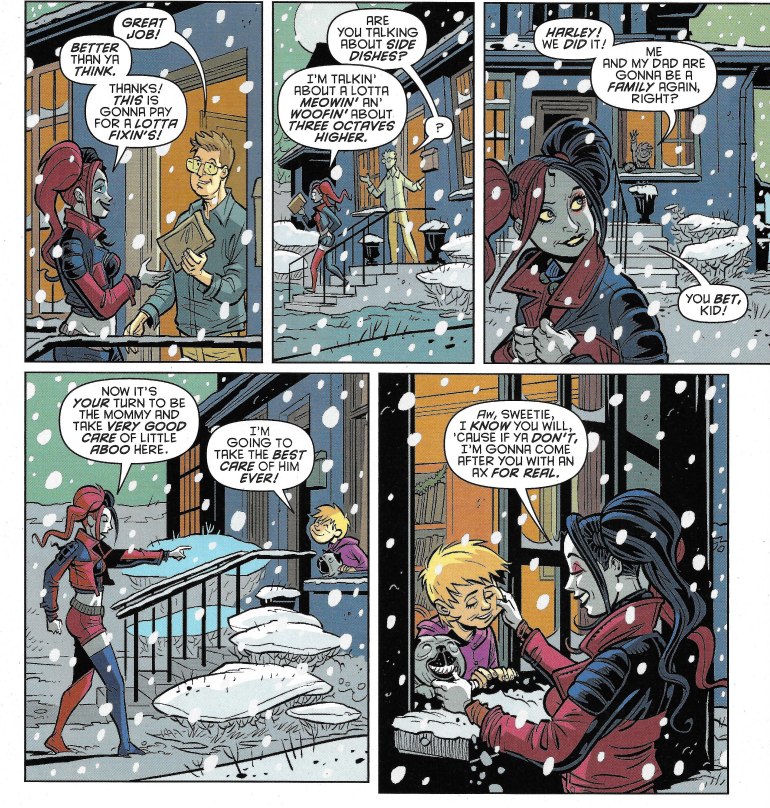 So maybe the real question isn't what is this book but instead why is Harley considered a "bad girl" icon at all. She's a bit off her rocker, but not really anything more than a mischievous schoolgirl.

The other two tales we are saving for Part Two closer to the next holiday. We will check in then and see how Harley handles New Years from a very special artist.
Posted by SonOfCthulhu at 4:13 AM