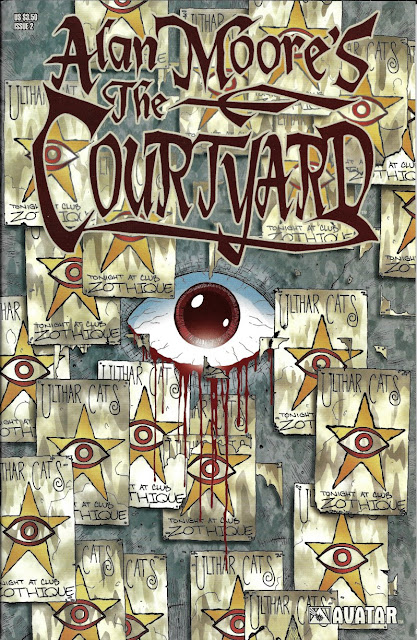 Prepare to be unsettled

There needs to be a huge disclaimer on this Alan Moore work: Danger! Reading this WILL cause you to lose sleep!

Alan Moore is of course the guy most noted for his work creating Watchmen, for penning two of the best Superman stories in the world ("For the Man Who Has Everything" and "Whatever Happened to the Man of Tomorrow"), for his Batman/Joker story The Killing Joke and for The League of Extraordinary Gentlemen. And those really are just the high points.

Moore has done lots of smaller tales with just as much impact as well as setting up other universes after leaving the majors. He is a magician, and not just in the literary sense. By that, I mean he actually believes he is a sorcerer.

After reading a few of his tales, I am inclined to believe that he can think whatever the heck he likes as continues to write like he does. Moore is a storytelling genius. He makes writing great storylines and dialogue seem effortless. I have no idea how he does it but at the risk of it being him dancing around naked in the forest during the rising of the first new moon after the Winter solstice, I say let him do it.

Hell, I'll shed my clothes and go help him.

Just give me another book as good as Marvelman or his run on Swamp Thing. He is simply AMAZING!

And he's a Lovecraft fan, so I respect him even more. When I saw he had written some Mythos fiction in graphic novel format, I snatched it up without even checking the price. I mean Alan Moore doing HPL stuff? I'm in. All the way in!

The book was called Neonomicon.

And it scarred me emotionally.

I read it on a business trip to Vegas. The convention I attended was a struggle, the constant lights and smoke of the casino that you had to walk through to get anywhere gave you sensory overload every time you left your room. Then you got to the vendor floor and experienced an entirely different type of overload. Not to mention the break outs and sessions where you got brainloads full of tech ideas. There was enough going on that I needed a break when I got back to my room.

Reading Moore's Neonomicon was NOT that break.

To an already unsettled mind in an unsettling place, this was like pouring boiling acid into a three inch papercut.

I don't think it was just the place, though. It was Moore's ability to clearly convey an idea in such a way that it seems like life. And the book has plenty of unexpected twists and turns that I will NOT spoil here. With the exception of The Courtyard, the ending of which is spoiled below.

See The Courtyard was a short story that Moore originally wrote as a prose tale in 1994 for the anthology The Starry Wisdom: A Tribute to H. P. Lovecraft. Moore planned to adapt it for his short lived HPL series called Alan Moore's Yuggoth Cultures and Other Growths, but Avatar gave him the means to print it as a stand-alone, two issue limited series.

Anthony Johnston stepped in to assist with adapting the story for comics and Jacen Burrows did all the art. Alan Moore guided the duo as the "consulting editor."

The result was astounding. So astounding that Moore decided to pay some bills using The Courtyard story as sort of a springboard into a bigger four issue epic called Neonomicon.  The story takes Lovecraft's racism and bizarre rituals to an Adults Only extreme that is impossible to read without feeling sympathy, sadness, and horror.

It is possibly the best horror comic on the planet, but not for the squeamish.

But the story begins here, in The Courtyard. It is the opening two chapters of Neonomicon and it serves to both introduce the setting and a few characters while being a self-contained story that is chilling. I'm going to state for the record that it is creeping me out to even think of rereading part of this tale. It is just that jarring. You will note that this story is in black and white, whereas the Neonomicon is in full color.

I only have issue two in actual comic format, so allow me a bit of setup exposition before we dive in, if you will:

Aldo Sax is an FBI agent who specializes in "anomaly theory," a method of correlating unrelated data to catch criminals. He's been very successful. His latest case is a mystery that needs solving. Three serial killers have been caught in different parts of the country, each killing their victims using the exact same ritual torture and dismemberment. None of the killers had any contact with any of the others.

Aldo has traced a lead to a nightclub in Red Hook. A band called the Ulthar Cats went crazy speaking gibberish on stage the night before issue two opens. Aldo saw the performance and met a contact for the unknown drug that the band was on. A lisping man who wears a veil named Johnny Carcosa offers him a hit of the new substance, something called Aklo. Somehow the drug, Carcosa, and the strange language the Ulthar Cats were throwing down relate to the case, and only Aldo Sax's anomaly theory has pulled all these threads together. 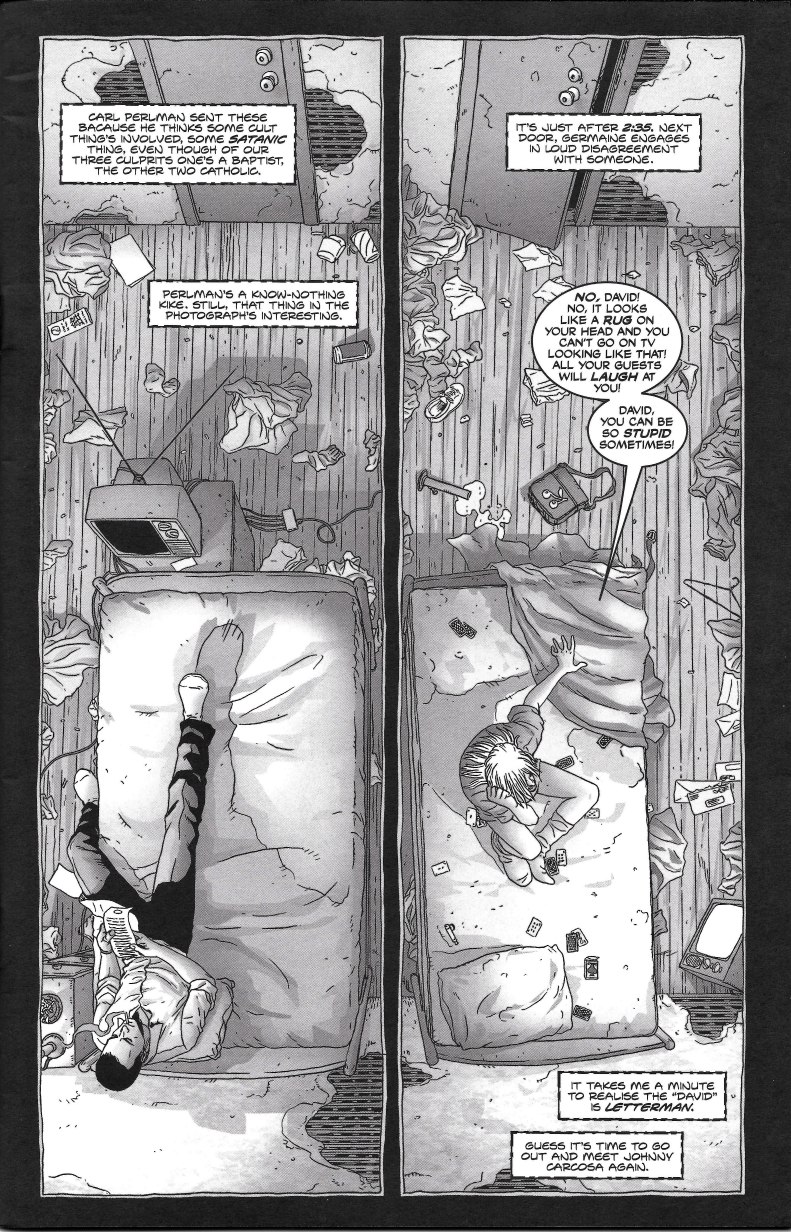 We begin with Aldo sitting in a flophouse, his cover identity being that of someone who couldn't cover his own expenses. His current roommate is a disabled woman who appears schizophrenic. Here she is talking to the TV before Aldo goes to meet Carcosa for the hook up. 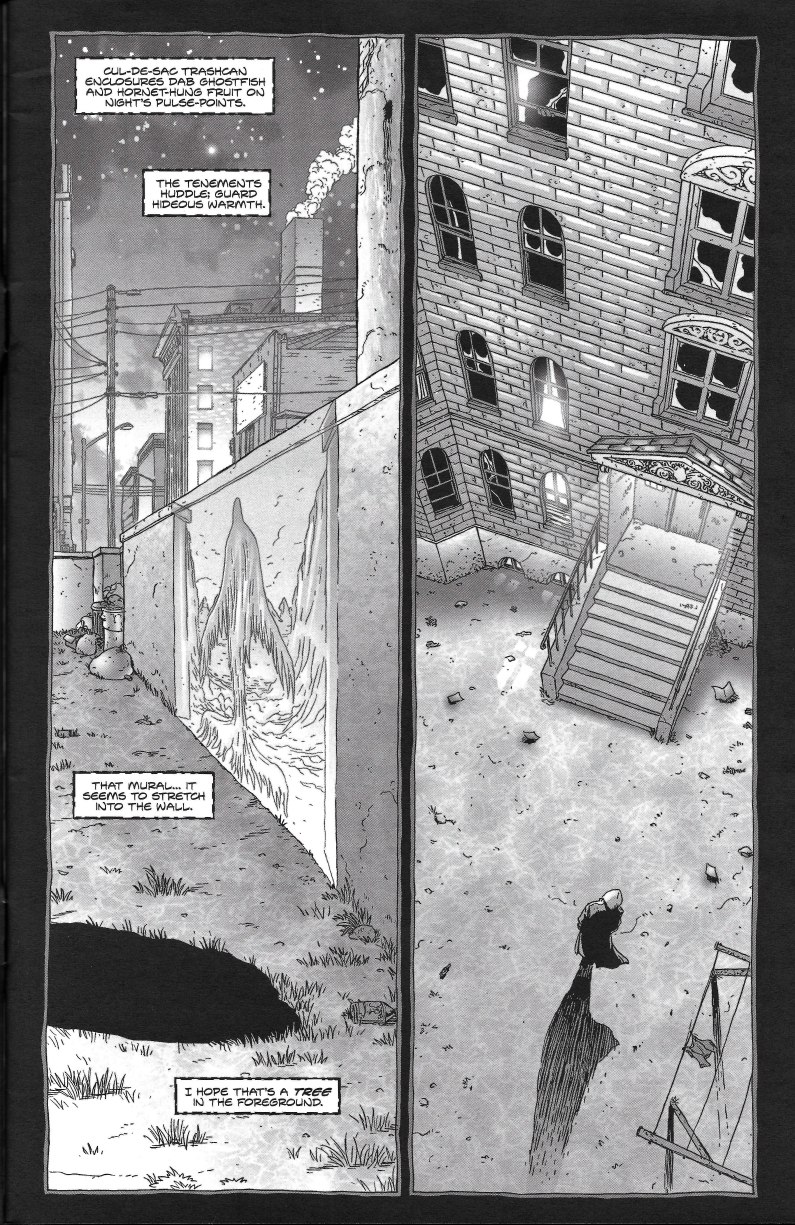 This same panel design is used throughout this issue, which was something I didn’t notice in the bound edition. It is very effective. Aldo has to cross the courtyard to get to Carcosa's building. The place has a unearthly painted mural that factors into the other story in a much bigger way. Here it is just window dressing that pricks our neck hairs up. 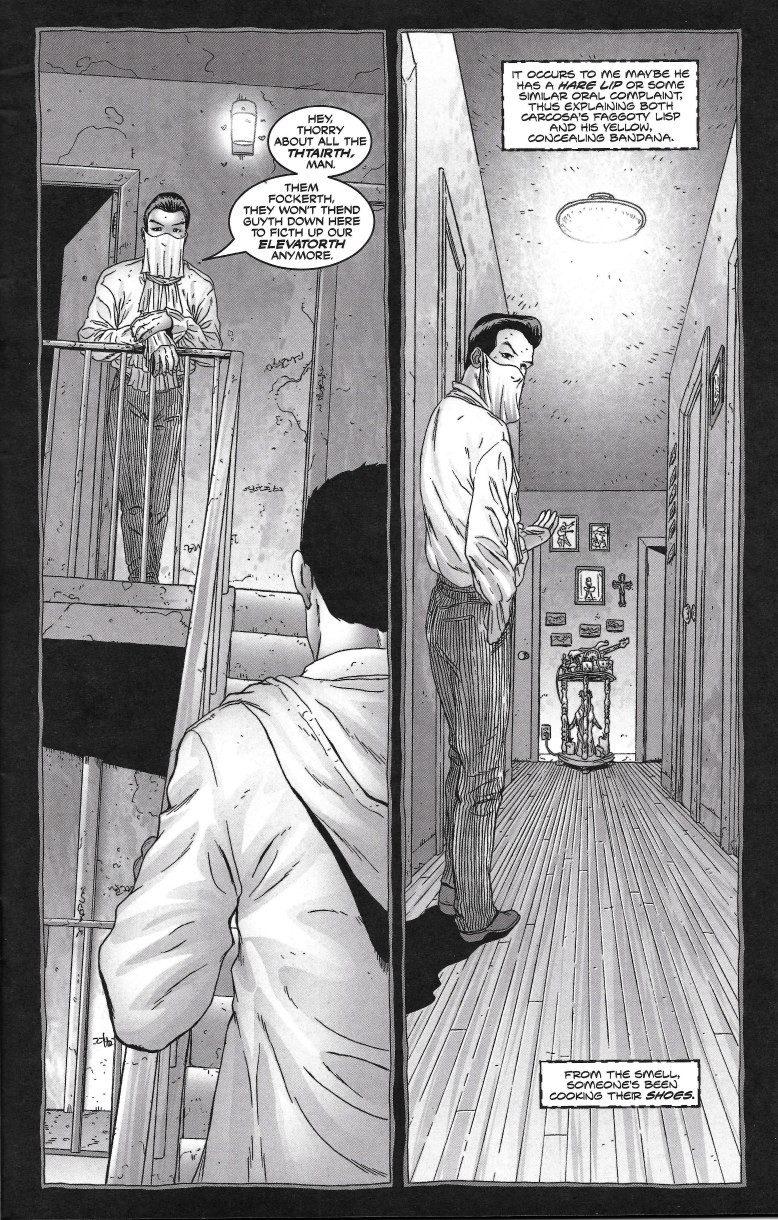 Carcosa is waiting for him, like he knew exactly when to expect the undercover detective. From the get-go, there's something of a creeping unease emanating from the fopish, lisping dandy. 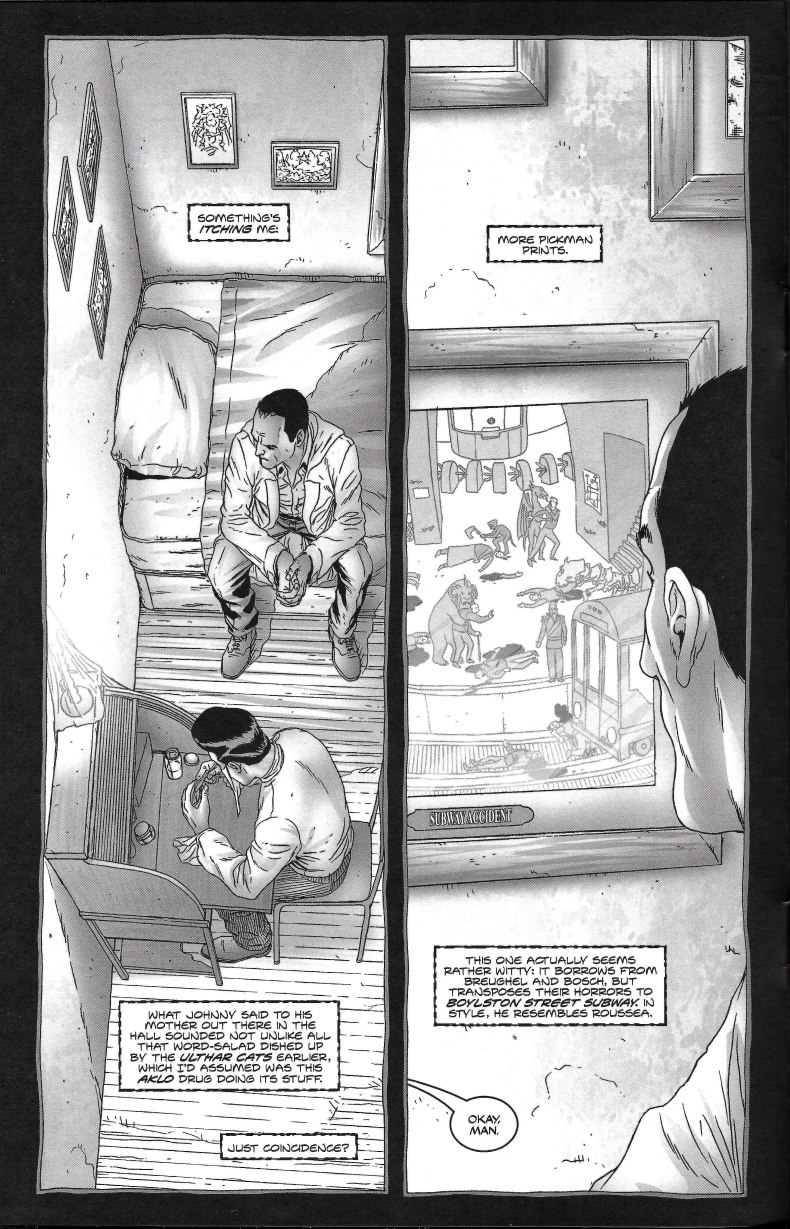 As Carcosa leads Aldo into his apartment, the drug dealer has an odd exchange with this woman we assume is Carcosa's Mother that uses the same language as the Ulthar Cats did. Feeling he is on the right track, Aldo follows Carcosa's lead into his bedroom. There is lots of HLP dropping here, all intentional and all to add to the setting. It firmly plants this in the Mythos and I applaud the way these are handled. 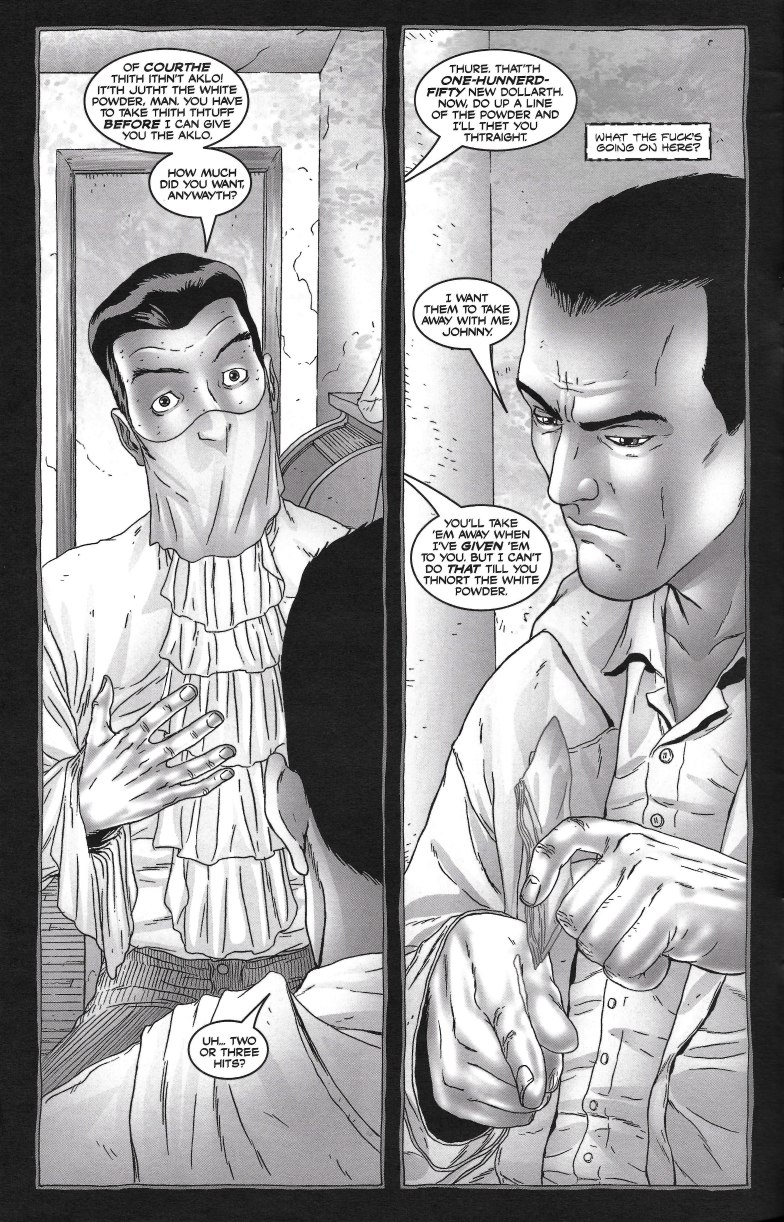 Carcosa offers Aldo a drug called DMT-7, which is a short-lived hallucinogen and not the link that Aldo is looking for. Aldo also thinks he'll be about to take the Aklo away for analysis. He'll take it away alright, just not in the way he suspects. 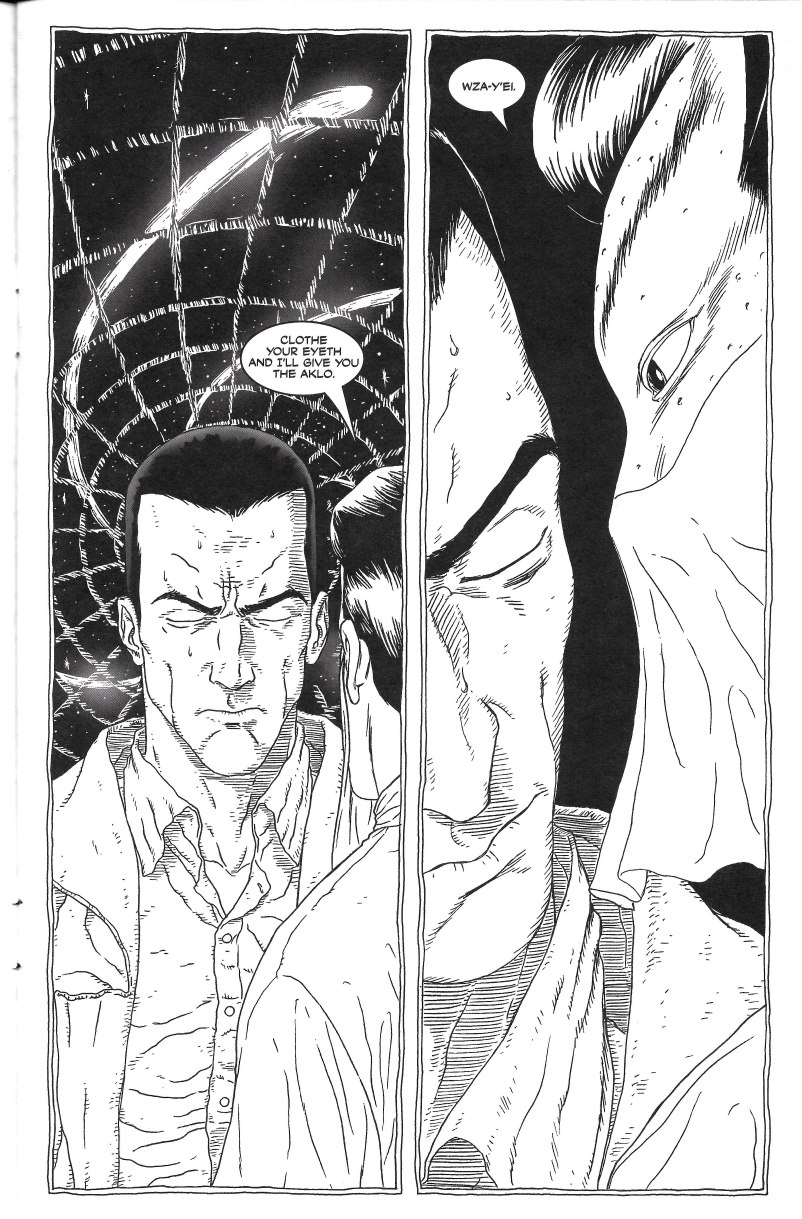 To humor Carcosa, Aldo snorts the powered and Johnny starts giving him the Alko, which isn't a drug. It's a language. Alko is the language of Cthulhu and the Elder Gods. The next six pages are astounding graphics that evoke the mythos as Aldo is imagining them under the influences of the DMT-7 and Carcosa's careful application of three single words of the Alko language. 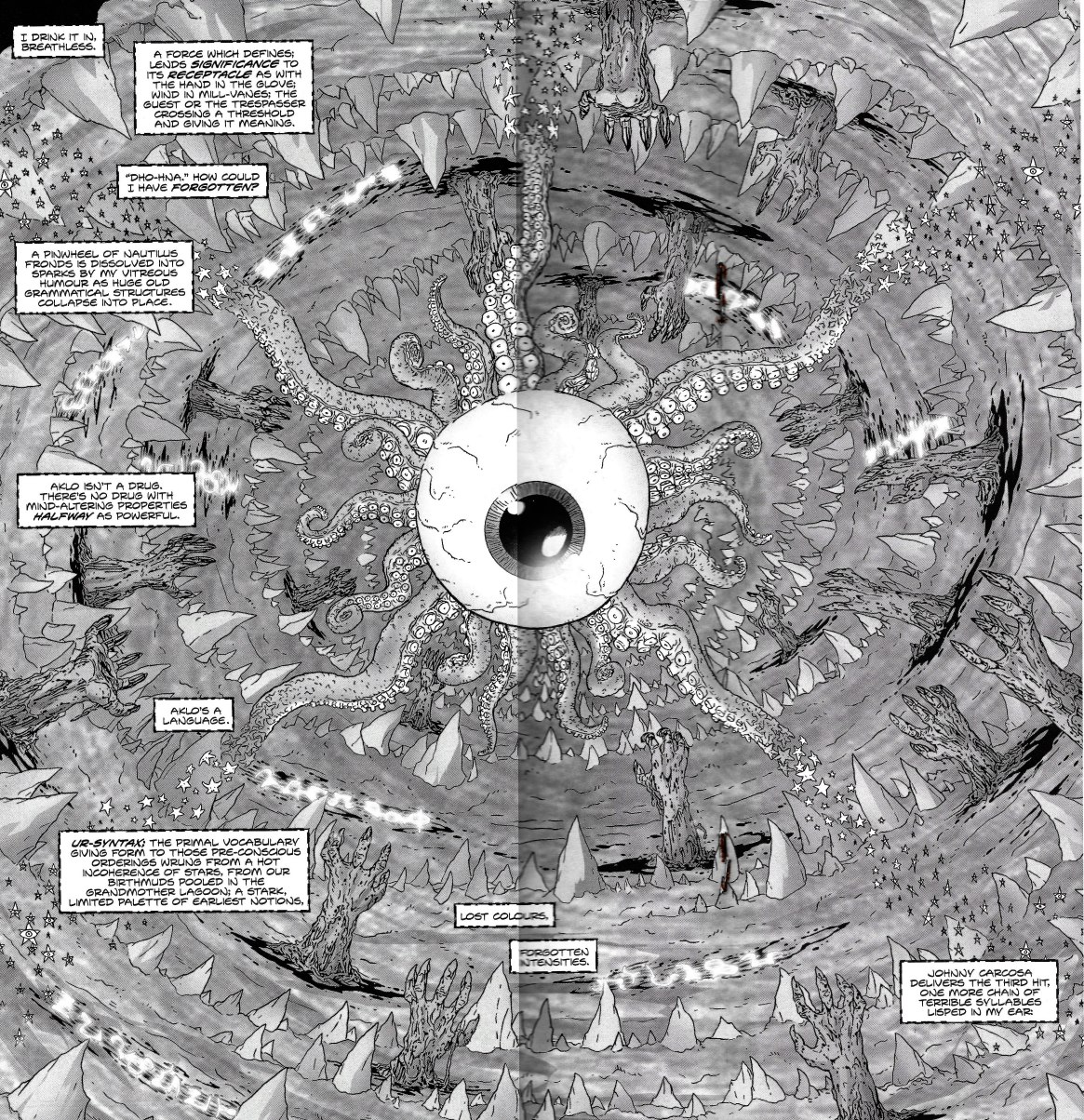 It is enough to drive someone mad. 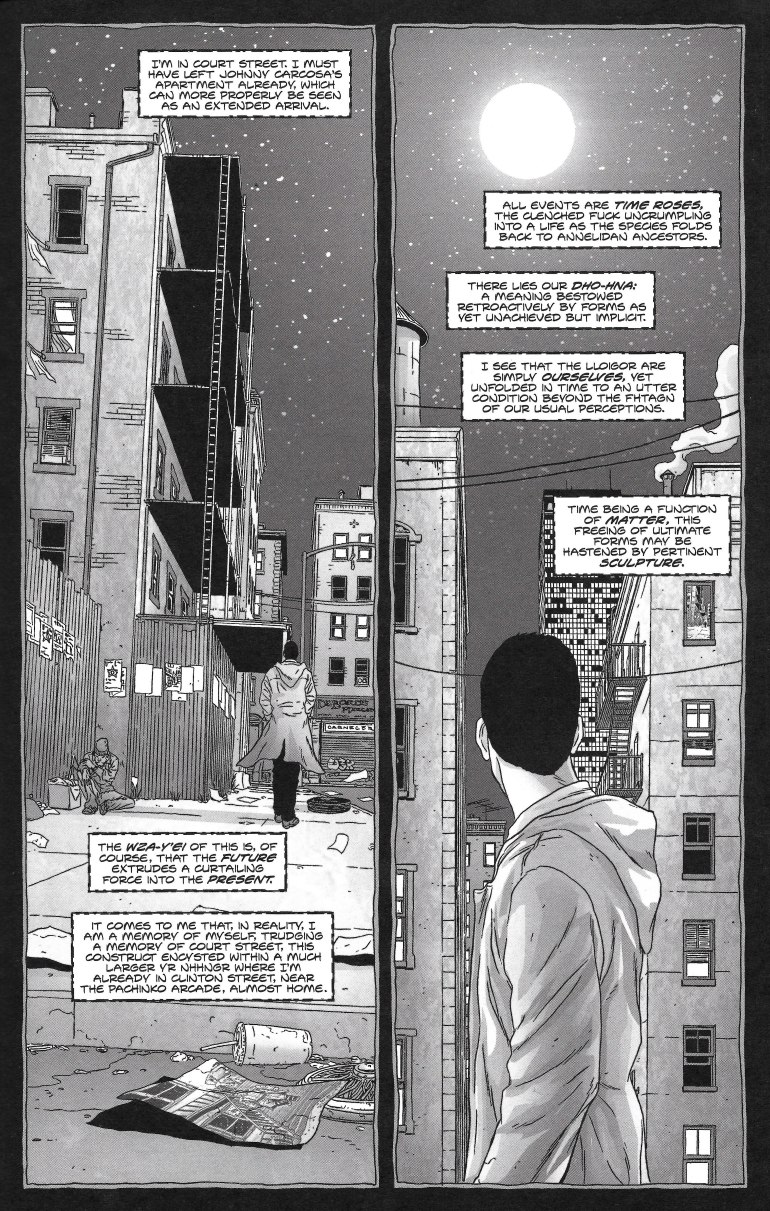 The book ends with two pages of Aldo back at his room. 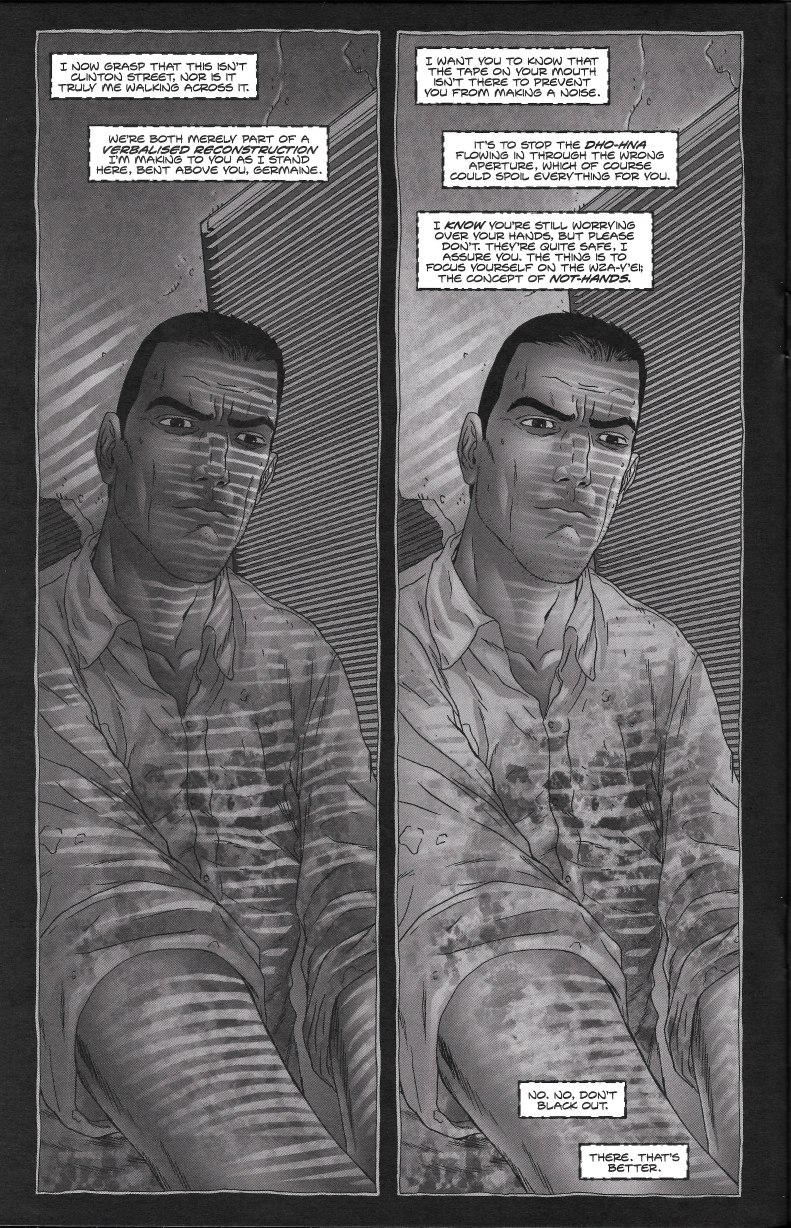 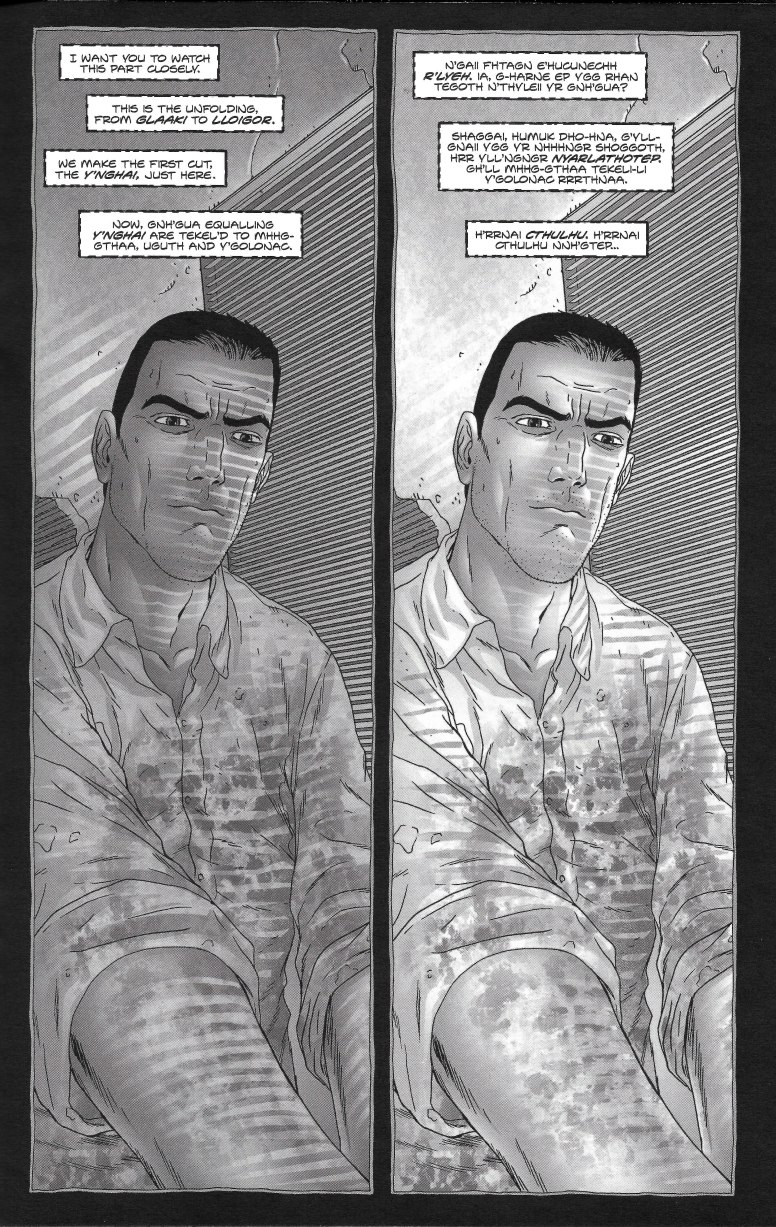 He is murdering his roommate, the young schizophrenic girl, using the exact methods the other three murderers used. He has discovered the secret of their murder sprees by becoming a part of the mystery.

And that is only the prologue to a larger story. A larger, darker story that will have you on the edge of your seat and upset you for a tremendous time afterwards. This is a story about words driving people to the brink of madness and over. And the story itself nearly accomplishes that goal all on its own.

Fhtagn!
Posted by SonOfCthulhu at 7:46 PM