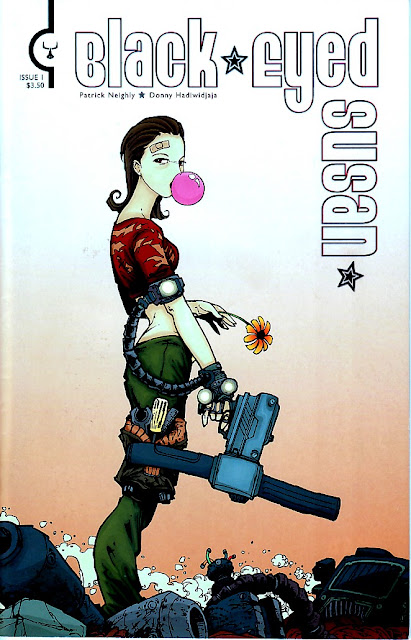 Black Eyed Susan started out with a few problems. Yes, that cover price is something to get over. For a book produced in 2004, that was a bit above average. The nice thing is the story is 46 pages long with no ads. Additionally the book was scheduled to come out bi-monthly, so if you got absorbed in the story you’d be shelling out that price and then waiting. If you’re worried about your wallet or your patience then it’s lucky for you the comic bit the dust after issue 2.

Unfortunately it’s not lucky for comic readers in general. Mad Yak Press, the company that produced this book and several others was the joint effort of writer Patrick Neighly, Kereth Cowe-Spigai and Anne Marie Horne. Mad Yak produced a handful of comics, graphic novels and one guide to Grant Morrision’s The Invisibles before folding up tents. Their website lists no reason for the dissolution, but does state that each of the principals have gone their separate ways.

BES was written by Patrick Neighly and drawn by an artist named Donny Hadiwidjaja. Hadiwidjaja is an Asian manga artist that Neighly found while doing his full-time job as a journalist focusing on Asia Pacific technology and culture. While Neighly is an interesting case study of a modern renaissance man, what with his journalism, comic writing, experimental filmmaking and manga adaptation work, the person that really intrigues me is Hadiwidjaja. His artwork in BES is nothing short of amazing. The book is very light on words and uses images to convey much of the action, character and emotion. Hadiwidjaja’s talent carries the book so well, it is a shame that it was discontinued before the first story arc could be completed (I had to track down issue 2 after reading issue 1. Sadly it was in the same quarter bin.). I can find absolutely no information on Hadiwidjaja except for the brief mention by Neighly of where his artist lives. Hadiwidjaja also did work with Neighly on the books Texarkana and The Supernaturals. Damn shame there isn’t more of his stuff around. Just look at this opening panel sequence and tell me it doesn’t leave you begging for more. 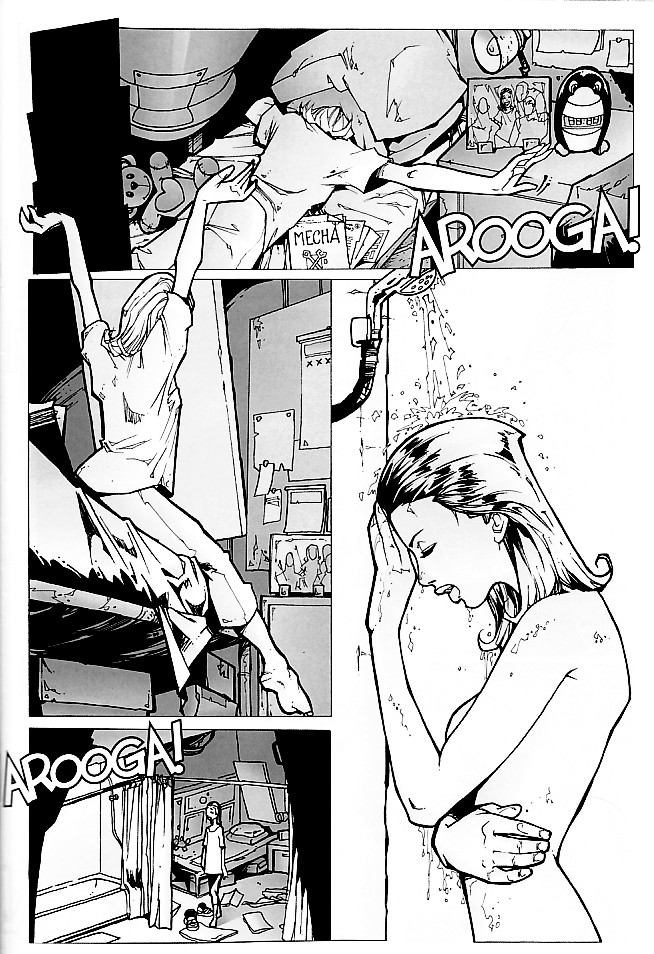 This is the way our story begins. We get a minimum of explanation as to our Martian invasion or how the war is going. Heck, we don’t even know if what we are seeing is taking place on Earth. Neighly keeps things on a very personal level, which does wonders for developing our main character/supporting cast. It also leaves much of the rest of the book vague and keeps you intrigued about how everything got this way.
Say hello to Melanie McDonaugh, our central character in Black Eyed Susan. What? You thought she would be named Susan? Silly, a Black Eyed Susan is a type of sunflower. Like the one she’s holding on the cover. Melanie is a mechanic. She’s been drafted by the military to fight off a Martian invasion. Her assignment is aboard the Tigerlilly, some kind of floating aircraft carrier.

You now know something the reader won’t for the next 16 pages. Not that any of that matters because what does matter over those pages is the complete unveiling of the character of Mel with nary a hint of dialogue. To show you how it all unfolds, it starts with that annoying AROOGA sound that is filling the Tigerlilly. 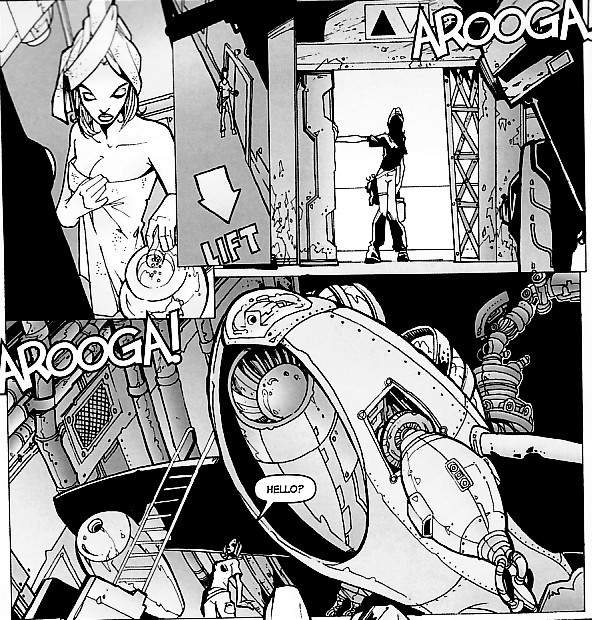 Mel proceeds to the aircraft hanger looking to see who’s alarm clock is going off. After checking a few of the planes she realizes two things. First, she is completely along on the Tigerlilly. How this has occurred is unknown as there appears to be a full compliment of planes stored there. Secondly that’s no alarm clock. It’s a proximity sensor that’s detected an incoming wave of Martian attack craft. 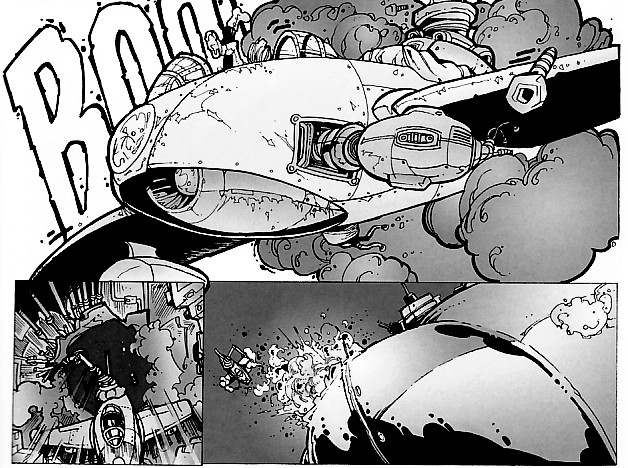 The attack is so violent that the Tigerlilly is holed, causing Mel and a fighter jet to be bounced out. The good news is that she’s in the jet as it goes winging its way into the sky. The bad news is that the jet is not powered up. Mel gives her best at getting it started up before she becomes street pizza. 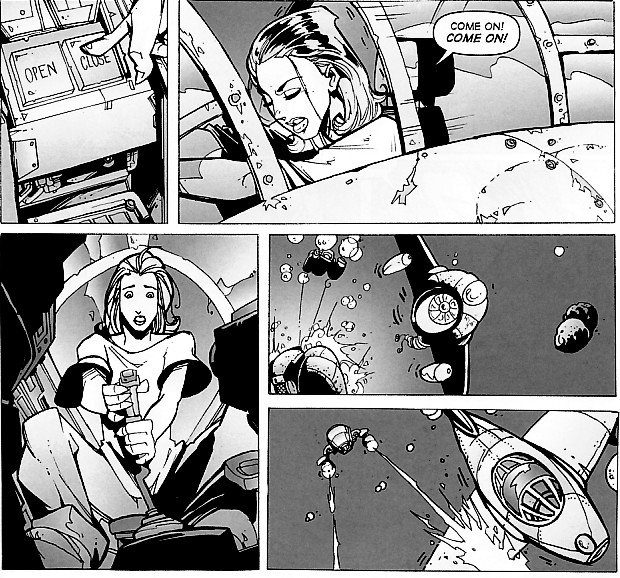 I love the effortless way all that is conveyed with a minimum of word balloons. Hadiwidjaja really knows his stuff. The fighter in that last panel takes one final potshot at Mel then peels off. Mel gets the jet started and the nose up enough to soft land in the desert. She tries contacting the Tigerlilly a few times with no response and then proceeds to wait for a pickup. 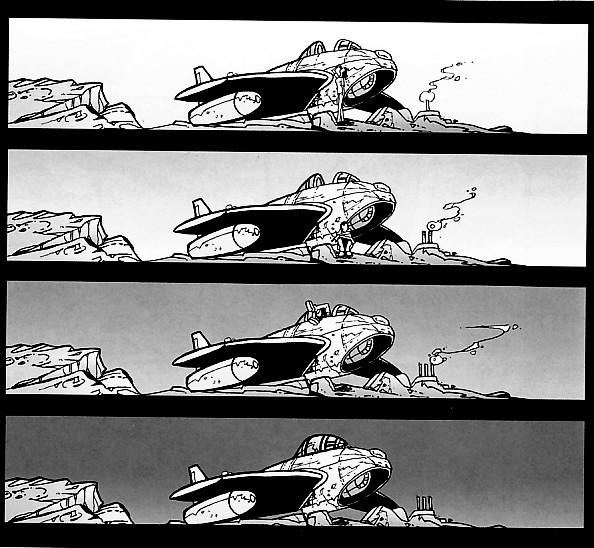 Again a simple series of panels tells us a lot both plot-wise and about our main character. Mel breaks out the survival kit and goes to work. She doesn’t panic and she is methodical about signaling her position. Mel waits patiently for a pickup without changing location for as long as it is safe to do so. The panels also show the passage of time. This is the type of art that makes you slow down and absorb it.
The next morning Mel begins work on the jet. Her efforts are rewarded with a working airplane. She takes off for the nearest city. What she finds is a desolate lifeless husk of a cityscape. 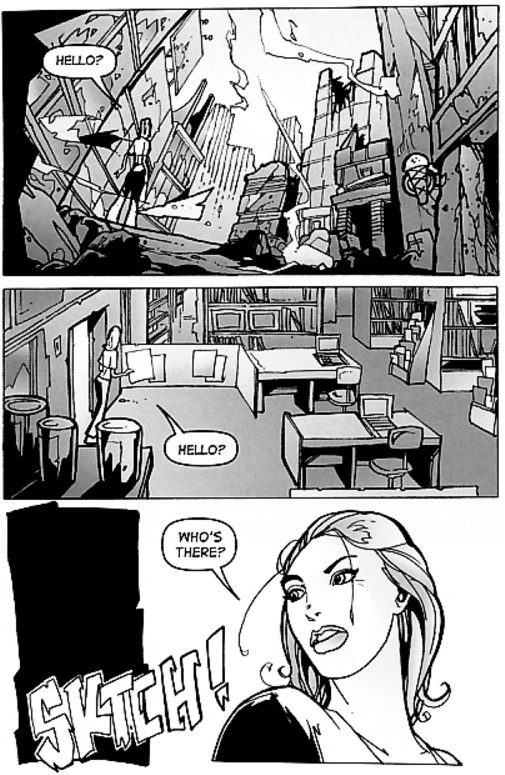 Mel hurries off to find out what is making that noise. Her investigations lead her to follow the sound she hears out into the street. Unsurprisingly it’s an alien. Surprisingly it’s a very well rendered giant cockroach-like alien. 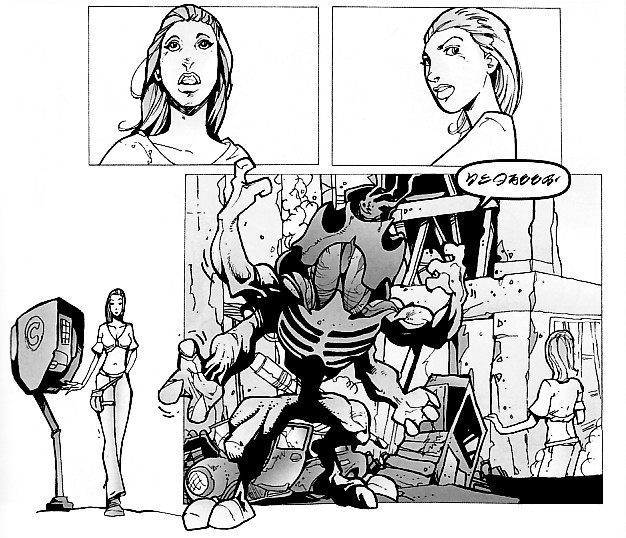 Very neat invader design. It’s menacing and unique. I do get a bit of the “Starship Troopers” vibe from it, but that’s okay. Bugs were good enemies there and I don’t see why remaking them into Martians isn’t a good idea here. 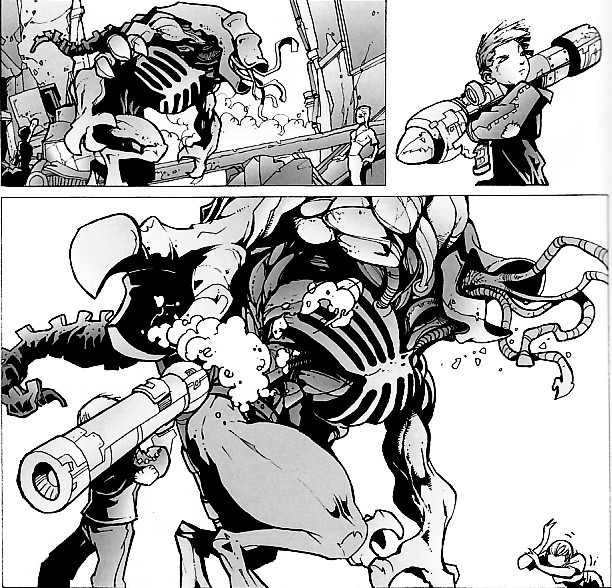 I also don’t have a problem with introducing another character at this point, even if that character is one-third Newt from Aliens, one-third the Feral Kid from The Road Warrior and one-third Rambo. This is our mute wunderkind weapons master, who just so happens to arrive in time to save Mel. Sure, we’ve all seen his type before. However the book manages to yet again take something old and do something interesting with it. 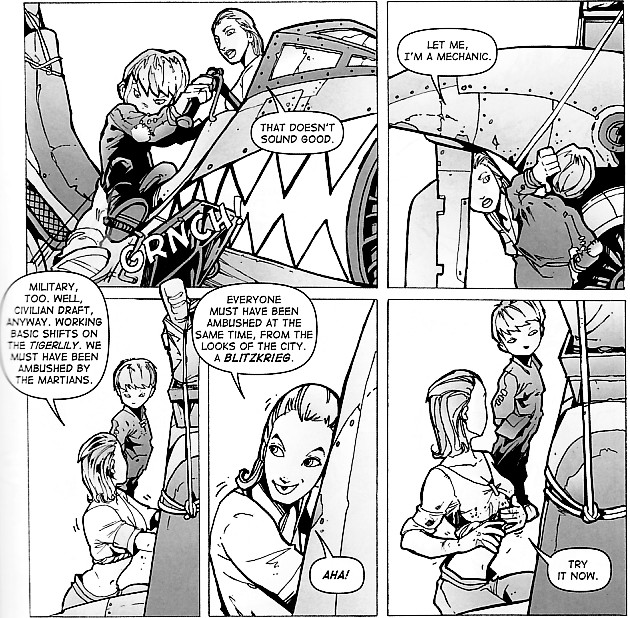 What follows is Mel following the young man around asking him questions while he restocks his supplies. He doesn’t speak a word and after he’s done raiding stores, jumps on this sail-motorbike that looks like something out of Star Wars Episode One crossed with One Piece. When it doesn’t start right up, Mel puts her skills to work and fixes it for him while filling in the holes in her own back story.

These two pages create a relationship for how these two will interact. They are equals, if different from one another. The boy is all business but Mel has a more maternal instinct tempered by cautious optimism. Next she asks him for a ride back to her jet. Parked beside it is the alien’s spaceship. Mel tells our kid that she’ll follow him home. The kid meanwhile shows shrewd thinking and destroys the ship before taking off. Note how Hadiwidjaja pulls this panel off. 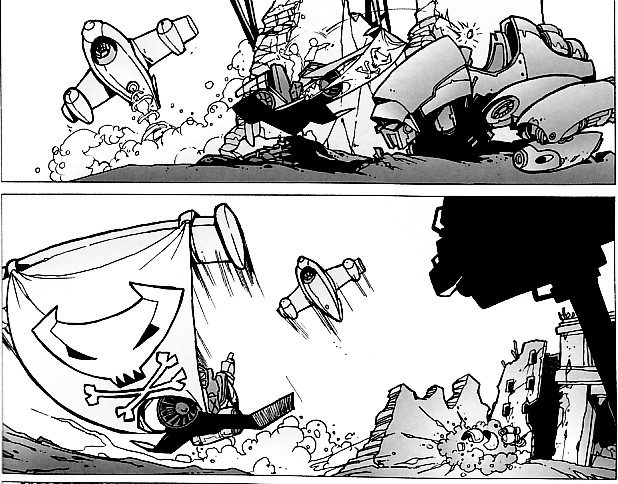 It’s neat to have such a role reversal between these two. The kid takes care of the “mother figure” and is more versed in military tactics than the solider. I like the dichotomy created but feel it needs something more. That something comes in the form of another solider who rushes in to save our pair just as a Martian tripod (YEEESSS! What’s a book with attacking Martians if they don’t have giant tripod war machines?) destroys the kid’s home and almost does them both in. Here he is watching the melee between the pair and their mechanical attacker. 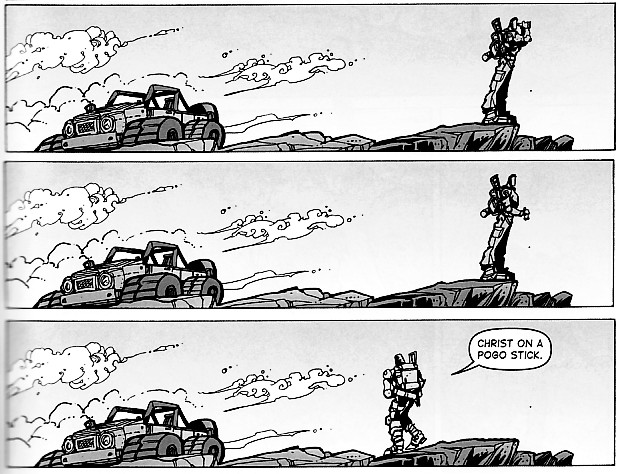 Meet Gus, the last surviving member of the Seventy-Sevens. Gus saves Mel and the kid’s bacon. After none of their ordinance dents the invader’s craft (and Mel displays how she can’t hit the broad side of a barn), Gus takes it out with a rocket powered grenade from behind. Mel is ecstatic to see another human and the audience is happy for some additional dialogue. It’s a credit to Hadiwidjaja that he got 30 pages with only one character talking without the book being an epic fail. He’s done a great job, but now we the audience really need some verbal interaction. Neighly does a nice job of filling those word balloons up. 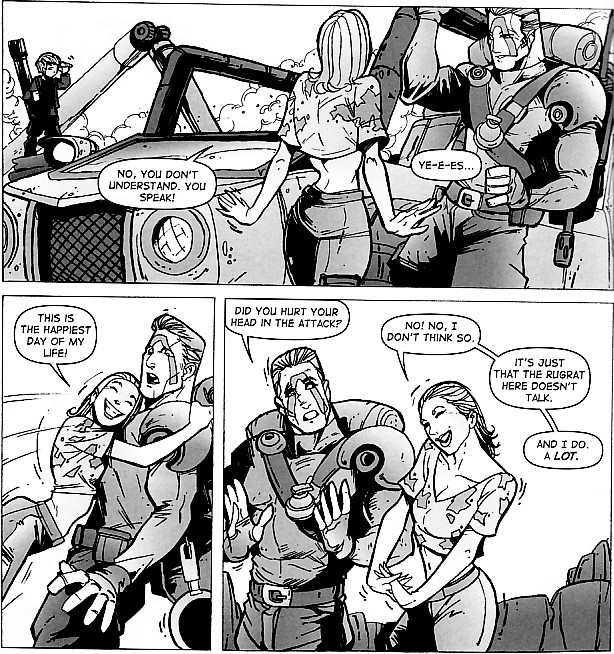 The end results of these newfangled “dialog boxes” are three fold. First our trio decide the kid’s home is marked so they move out following Gus to find a better hidey-hole. Second is a deepening mystery of just what is occurring with this alien invasion. Mel and Gus’s clocks are off – by three weeks. And Gus informs Mel that her ship that she was on a couple of days ago had been destroyed weeks ago. I’m wondering if the Martians aren’t screwing with these guys heads at this point. Lastly Gus finds out that Mel isn’t a going to winning any sharp-shooting medals anytime soon. Not to worry though, he has an answer for that. 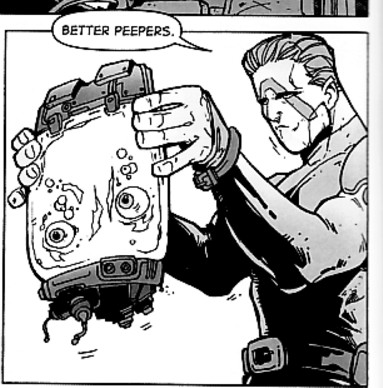 Youch! That’s an idea I don’t see eye-to-eye with him on. The eyeballs are “invasive ocular enhancements" that will turn anyone into a sharpshooter in about ninety seconds. After insertion, all their new owner has to do is look to aim while using a special gun. The technology does the rest. Unfortunately Mel has the procedure forced on her because the group finds themselves targeted by a couple of alien jets. The results are quite impressive. 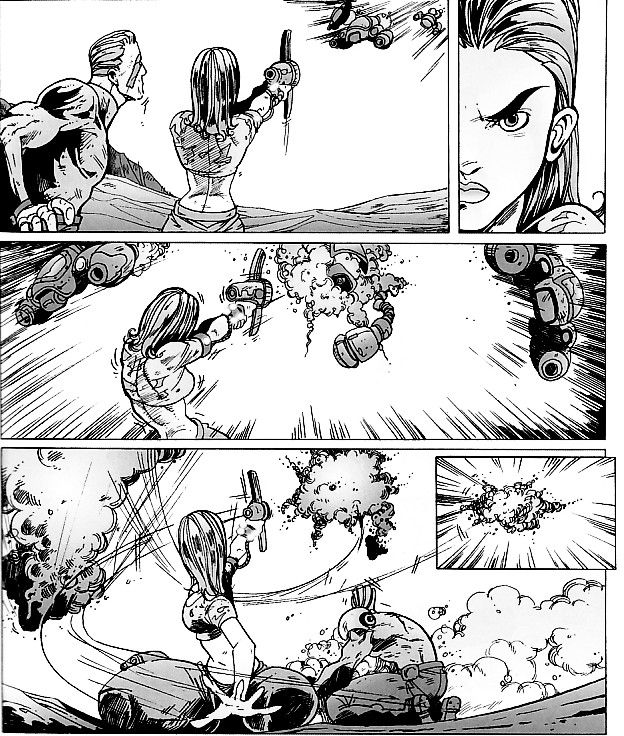 And that’s where we end, our group is formed, the enemy has been defined and we have an ever unfolding mystery as to how they and the world got into this predicament. It’s sad that BES didn’t last longer. Issue 2 was just as good as this one, but something tells me that high dollar charge (even for a double-sized book) was the killer. Too bad, too. I would have loved to see where this ended up.
Posted by SonOfCthulhu at 6:12 PM