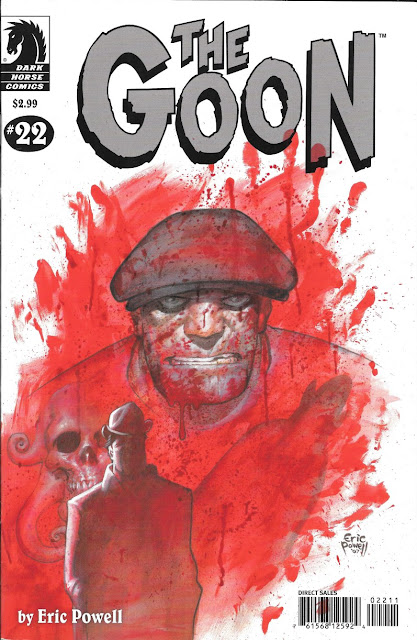 If you aren't reading this series, for shame on you

Eric Powell is sort of like a national treasure.

Powell writes and illustrates The Goon, a book I encountered because I am a horror and pulp aficionado as well as a bargain hunter. So when my local Half-Price Books offered three of his The Goon trades on sale in a multipack, I had to give them a try.

It was a bit like love at first read.

Which was problematic. Because, you see, Powell's stories are TOO good. They beg to be read again. His art demands you savoir each panel. A man could spend his entire existence reading Powell's The Goon and not feel any of it wasted.

And of course you know I can't let that happen, I have this monster of my own to tangle with: The Crapbox, where every day a book of questionable quality spits itself out at me and I am forced to, for good or ill. endure reading it.

So after those three morsels of Eisner-winning TPB perfection, I put my copies of The Goon back on the self, sadly vowing to one day return to them with all the additional volumes it would take to catch up and shuffled off back to see what popped out of the stacks for that day.

Here is where the hard part comes in. The Crapbox contains all kinds of odd's 'n ends, those bundle packs I buy books in being piles of different kinds of stories and what-nots. So I was happily surprised and astounded when I came across this book, issue 22 of The Goon.

Yay, I thought: I get to review it. But even better, I get to read it. Sadly I forgot that both of these actions require me to put it down at the end. I'm fighting with myself right now so I don't order the remaining TPBs online at Dark Horse.

It is just that good.

So read on IF YOU DARE!

But don't blame me if you find yourself, credit card in hand, filling a cart at Amazon with Powell's Goon-y goodness. Because you will. You WILL!

(Also Spoilers, which I never-EVER say in these things, but The Goon is seriously that good that maaaaaaybe you just go buy it on my recommend and skip the article until you have gotten past this part?)

So what is The Goon about? It is about a town with a nondescript depression era Noir feel that finds itself overrun by the living dead. Not just the mindless kind either. Their leader is a mob-boss style demon in a human's guise known as The Zombie Priest or Nameless Man. He seeks to take over things. And things being not just people but the occasional odd alien, mutant, mad scientist or blueberry pie-hungry skunk-ape.

As to what stops them? Enter Powell's hero The Goon, a scar-faced brawler in a pork-pie hat who seems as indestructible as the Hulk and just as efficient. He is often accompanied by his pal Franky, an Orphan Annie-eyed chum with a penchant for exploding things. The Goon has for years been running a scam that he is a collections man for Labrazio, a mob boss who The Goon beat to death with a rock.

We open the book with The Zombie Priest having fallen on hard times. It appears two new arrivals have stolen his power and are now violently torturing him. 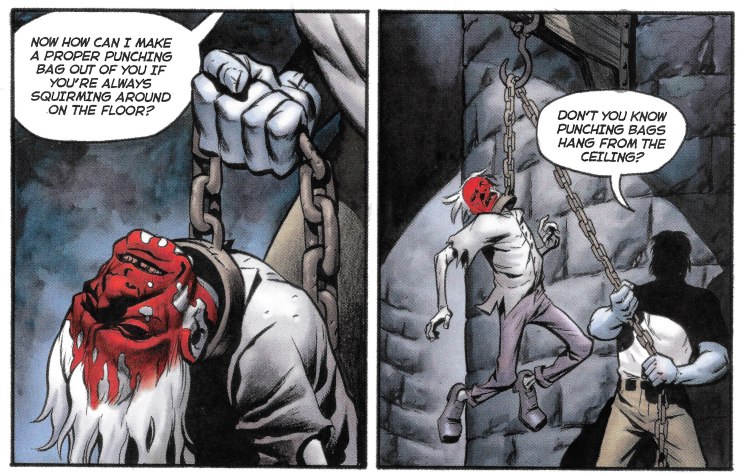 Spare no sympathy for him. He's done lots to make amends for in this series alone. Powel's pictures always have such power and grace. I mean, yeah it's zombies and brawlers and stuff, but Powell understands panel layout and how to arrange figures so it conveys more than just a momentary image. That first frame shows how hopeless and helpless the once mighty Zombie Priest is now. Everything from the weight of the chain and the hardened grip of the fist…graphic storytelling at its finest.

Anyway, so the bad guy is beaten by the BADDER bad guys and then they make plans to kill Momma Norton, an old gypsy woman who is one of the Goon's friends and informants. The Goon, however is busy dealing with Franky. 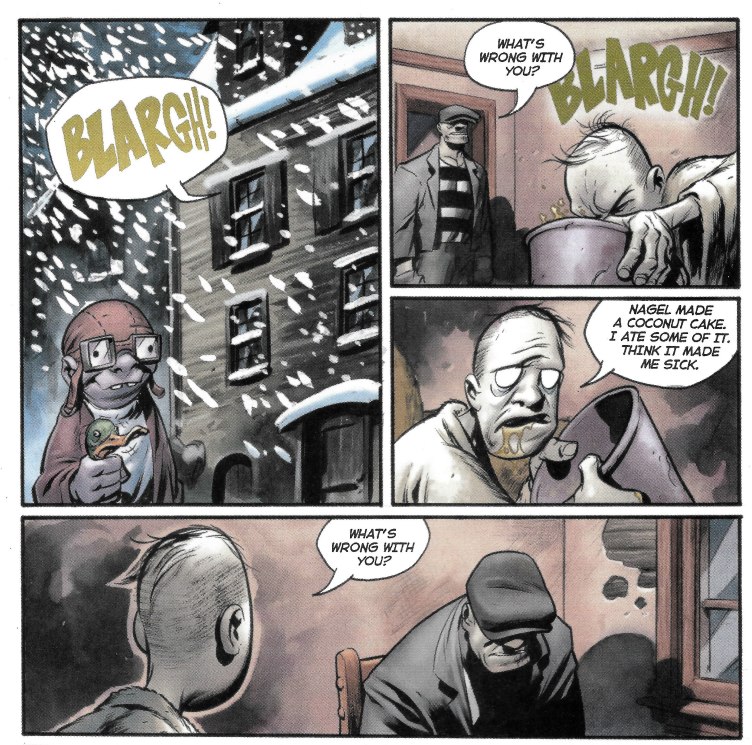 Franky got food poisoning off Nagel's cake. The Goon didn't have any but looks sick at heart too. Appears one of their friends was turned into a zombie, a guy by the name of Smelly Steve. Before Goon leaves he can't help but turn the crank on Franky one more time. 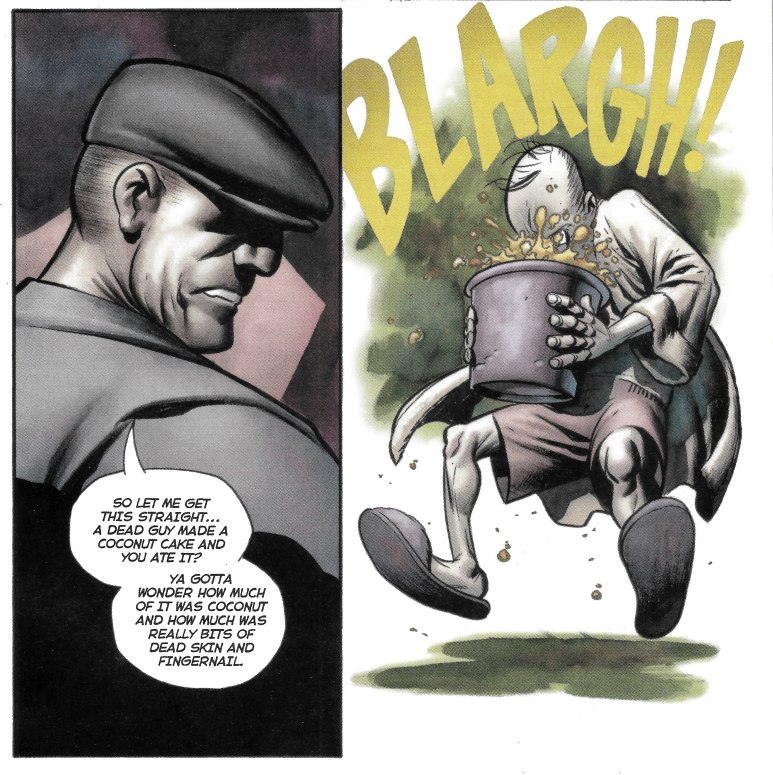 There it is: Powell creates humor and insight into each character with a deft touch of dialogue and art. Simply amazing.

Back to the story at hand though, because it is a heart-wrencher. First the setup page of Momma Norton leaving the neighborhood shop and encountering a powerfully accurate portent of what's to come. 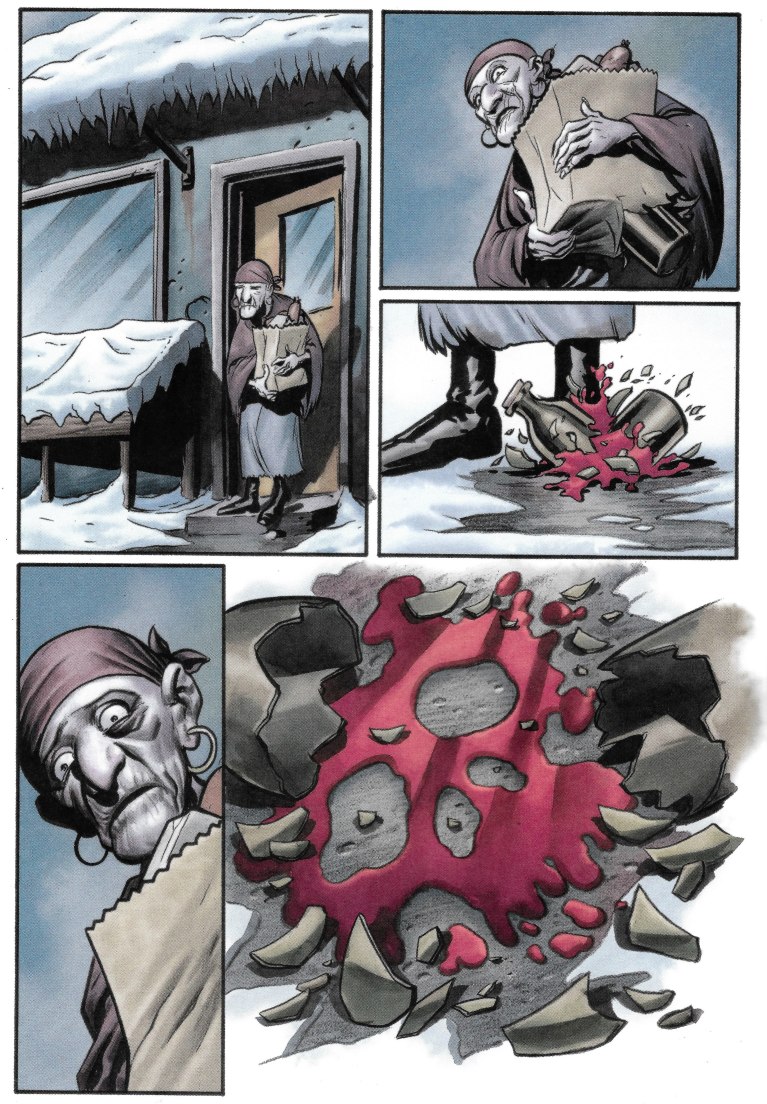 Beautifully done. I FEEL the emotion in every line.

And the next page counterpoints that scene with one of equal power as her omen comes true. Our mysterious friends who took the priest make good on their threat to the Goon and anyone who helps him. 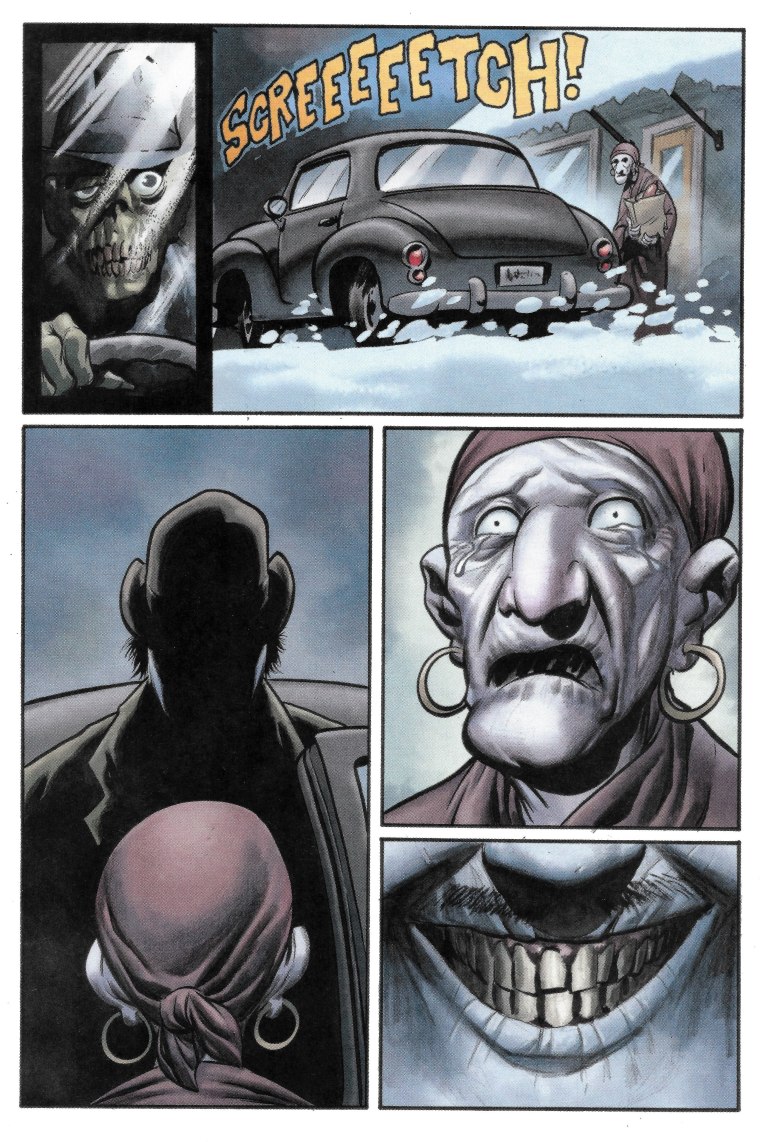 Look at the power in those two pages. Note there isn't one word of dialog, yet the content says VOLUMES story-wise. Annoyance, shock, surprise, terror, realization, revenge…all played out in two pages without one piece of narration or one character speaking. Astonishing doesn't begin to cover it.

Like the all-knowing sage he must be, Powell knows we counter-point all this with something very ordinary, like two friends cutting up as they walk down the street, unaware of how their world is about to change… 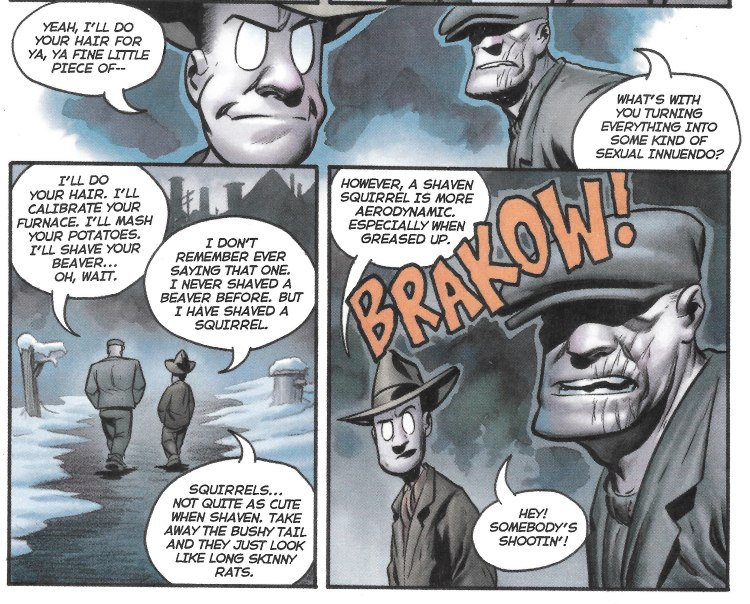 And then it does… 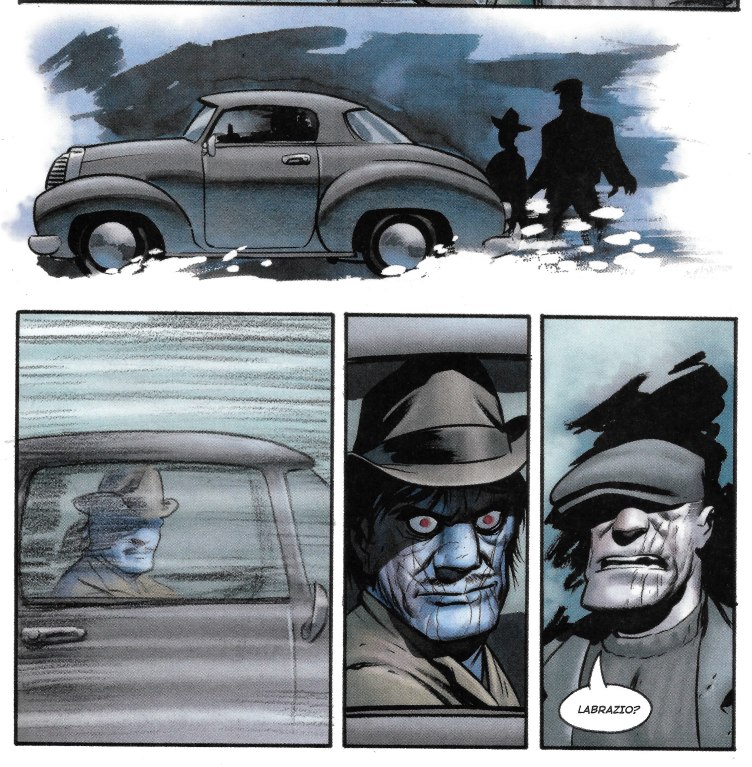 There are pages in The Goon that you just have to absorb in their silence. They call to you to drink in their essence and FEEL something. Art. True art does this.

So there is a new mystery for The Goon here as he killed Labrazio years ago and clearly this guy's cranium isn't bashed in. But before he can tackle this puzzle, he has to deal with this. 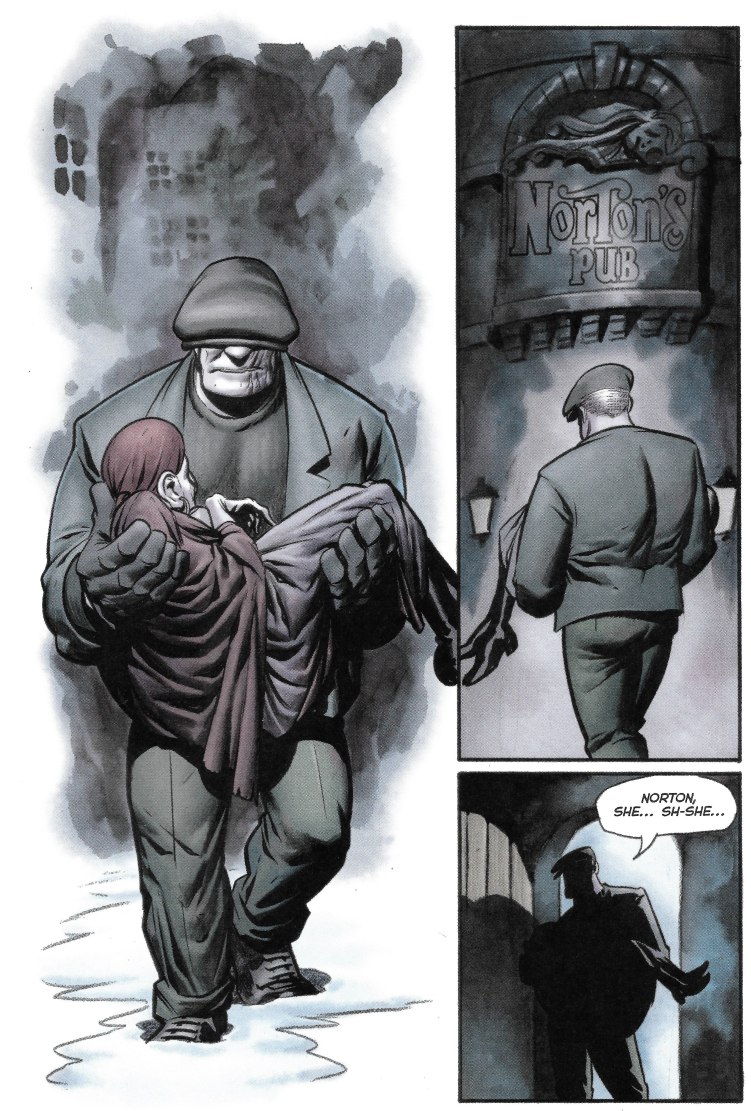 Punch me right in the gut, will you Powell? Just make it hurt.

Momma Norton's son vows revenge, while the Goon looks into Labrazio's resurrection, sure of who he saw. His frustration and pain well up as he digs up Labrazio's coffin. 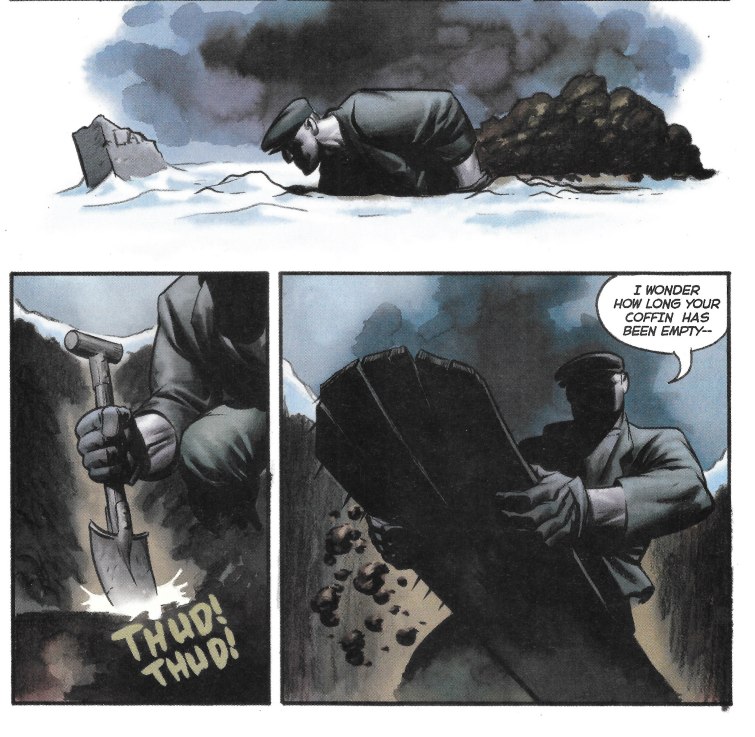 Labrazio's corpse. And, upon exiting the grave, a host of mini-demons hidden in the snow waiting to kill him. They try… 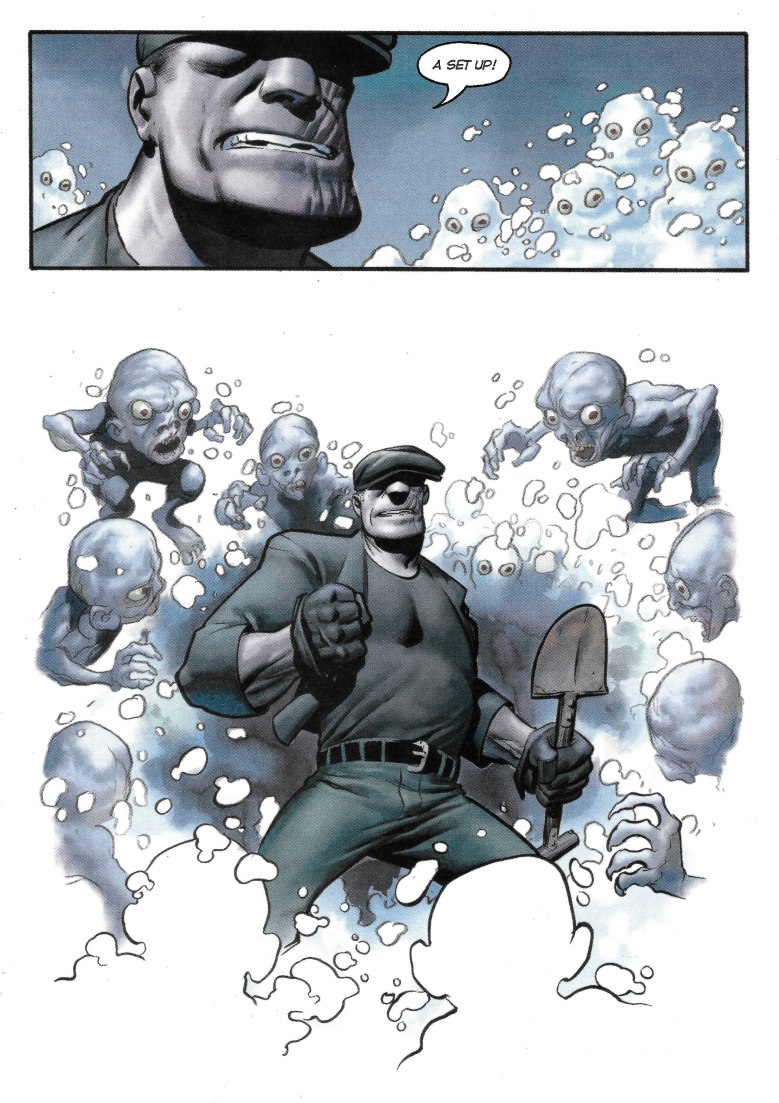 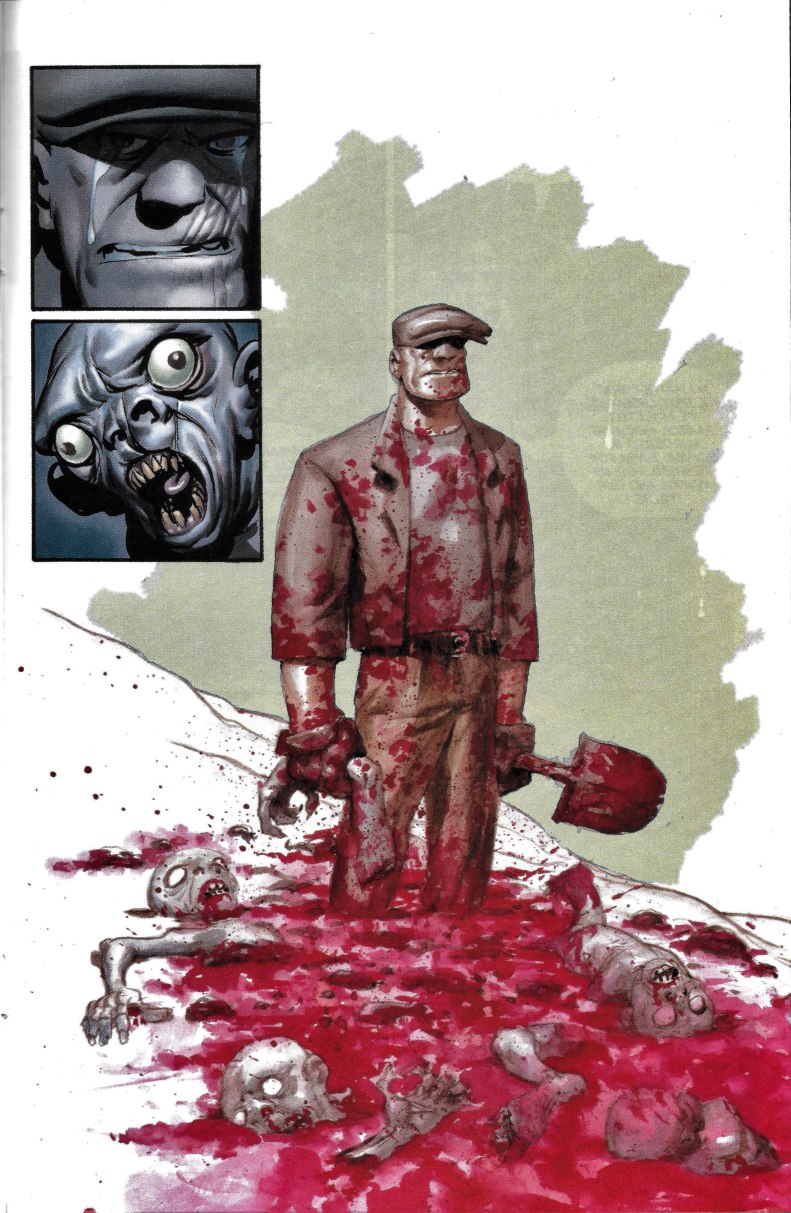 So by now you've already ordered a set, right? If not, WHAT ARE YOU WAITING FOR?

Highest endorsement ever. Go Get THESE NOW!

Posted by SonOfCthulhu at 6:40 AM