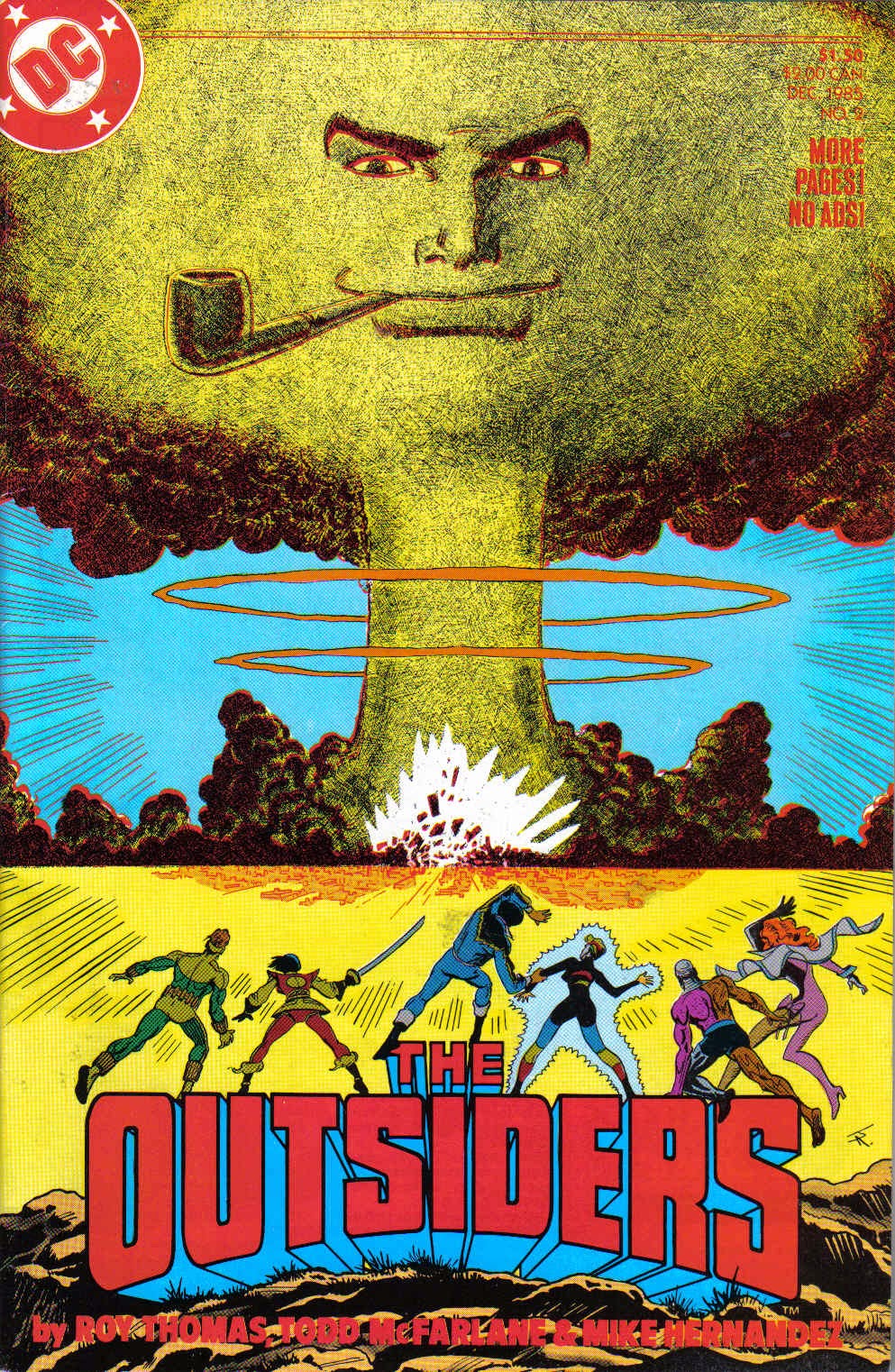 Don’t get all excited! Todd McFarlane did NOT draw this comic!

Cover mistake aside, I promised that I’d give my review of Looker’s outfit before barreling into issue number 2. I’ve been having trouble putting this into words because each time I view the pictures of Looker in her outfit, my brain starts to spasm uncontrollably. Aparo writes that the concept for this travesty in cloth was “inspired by an actual dress and an actual swimsuit”. What he doesn’t say is that the real dress and swimsuit were sold only to the mentally handicapped. 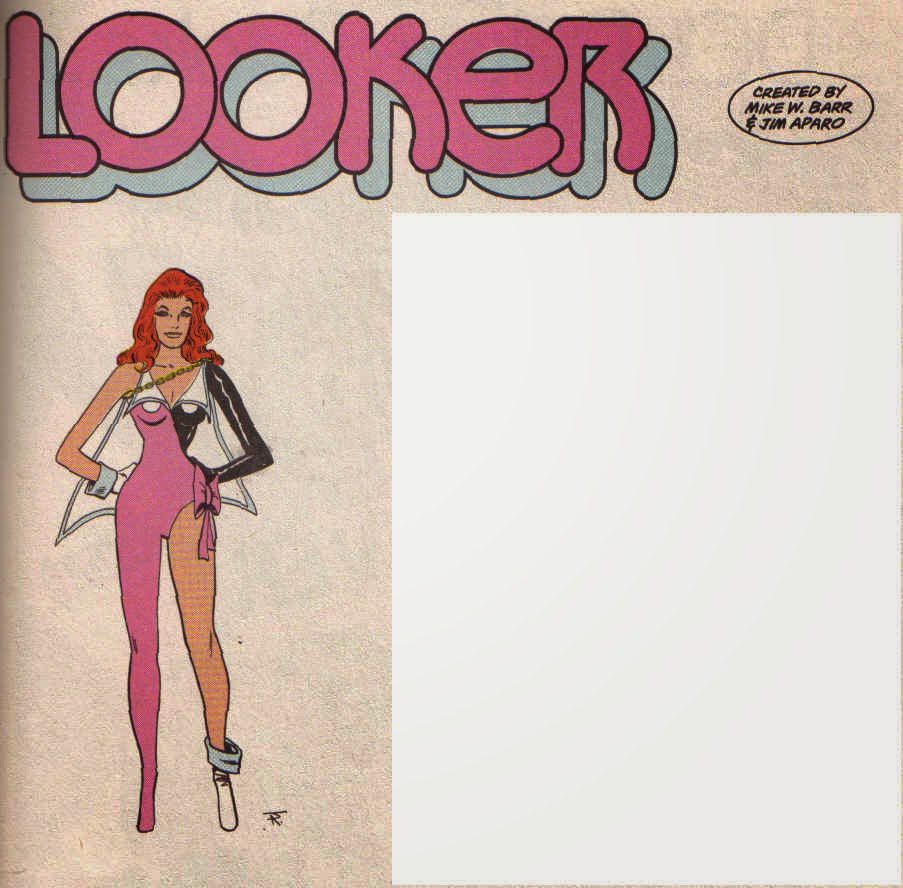 Let’s do this as a top 5 countdown to help me focus on the problems I have with Looker: 5. Too much eye shadow. There is a reason that eye shadow is sold in those small little compacts and not in Sherman William’s-sized paint cans. You aren’t suppose to use a bunch of it on your eyes all at once. Even those compacts are suppose to last multiple applications. The way looker applies it, she’s empting one compact a day. Last villain she fought called her Raccoon Girl by mistake. 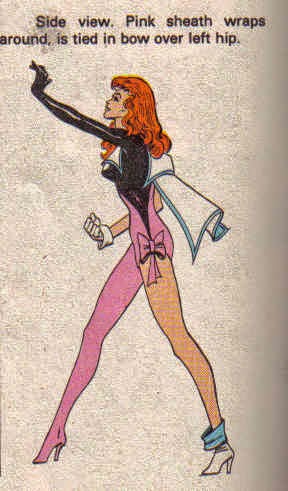 4. Pink bow does not say “I’m a tough super heroine”. It says “I work in a Holly’s Hallmark store.” It’s very clear she didn’t get much benefit from Batman before he left, because hip bow is not going to frighten any “cowardly, suspicious criminals”. It might make them giggle uncontrollably, but that’s an embarrassing way to beat the enemy. 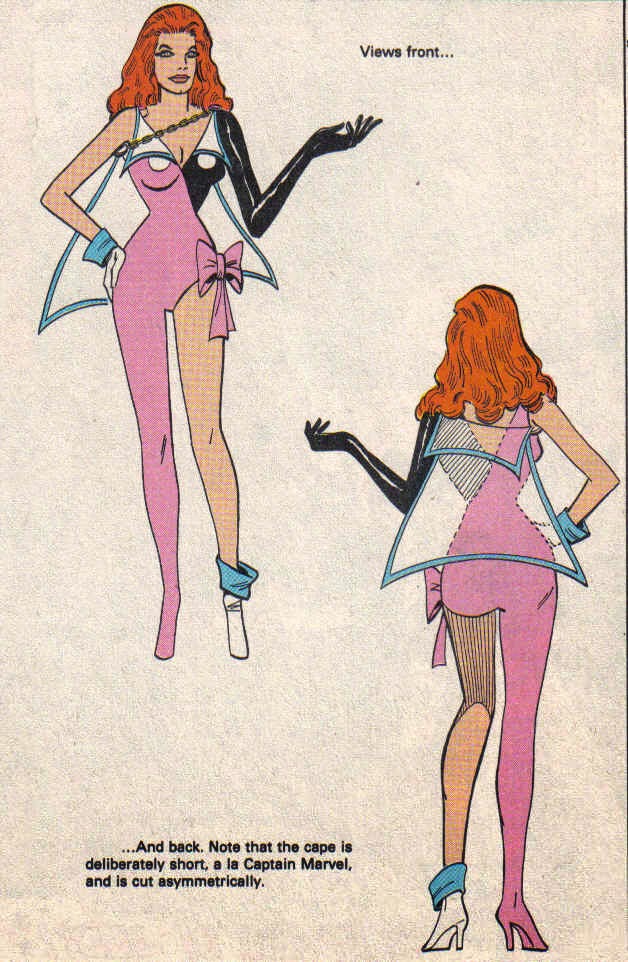 3. Bare arm and leg look goofy. Did one pant leg get eaten by a lawnmower? Did it spit back a boot? What is the explanation on the right sleeve then? Some superheroines look like they’d be freezing when it is cold because their outfits are so skimpy. There are other heroes who look like they would sweat like a pig if the temp rose above 75 degrees. Looker’s costume has the singular honor of looking uncomfortable at any temperature. 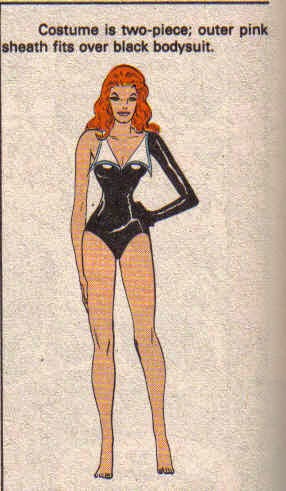 2. High potential to “ride up”. The crotch area of Looker’s costume enjoys the double-jeopardy issues of uncovering her left cheek and/or flashing her enemies a glimpse of her bare camel toe region. 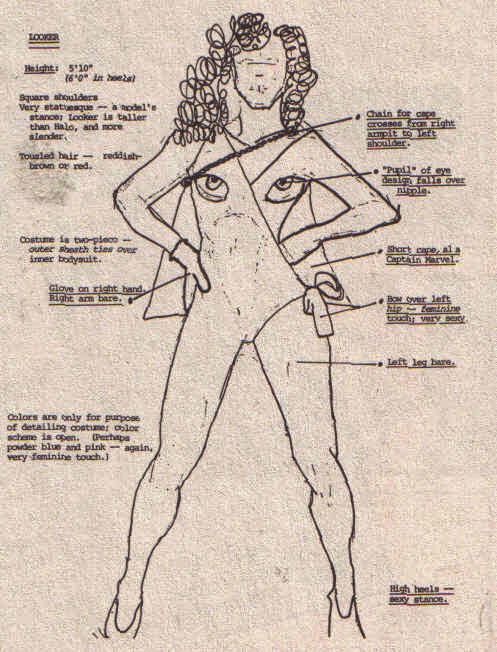 1. HER BOOBS ARE EYES! I get it. Looker means using your eyes and so they put eyes on her costume. Not real detailed, but enough for you to get the idea of what they are. All that seems logical to me. I do have a problem with where they placed them, however. Looker’s boobs are suppose to look at you. Now how many times have women caught men staring at their boobs only to tell that man to “look her in the eyes” instead. With Looker, you can have it both ways, because looking at her boobs means you are looking at her eyes.

Notice that the pupil of each eye is suppose “to fall over the nipple”. Sadly, when she gets older, her eyes may end up looking at the floor.

*sigh* Well enough of poor, poor fashion-victim and seasonally-challenged Looker and on to reviewing issue number 2. As you recall from our last issue Looker was captured by our prune-faced villain. She is being drugged by the environmentalist who is reluctantly helping Mr. Wrinkles and his “nuclear family”. The Outsiders come to the conclusion that her cover must have been blown and use the Mom robot to stage a trap. Unfortunately this leads to a confrontation with the upgraded Nuclear Family, who give them a hard time. Also they trade witty barbs while fighting. 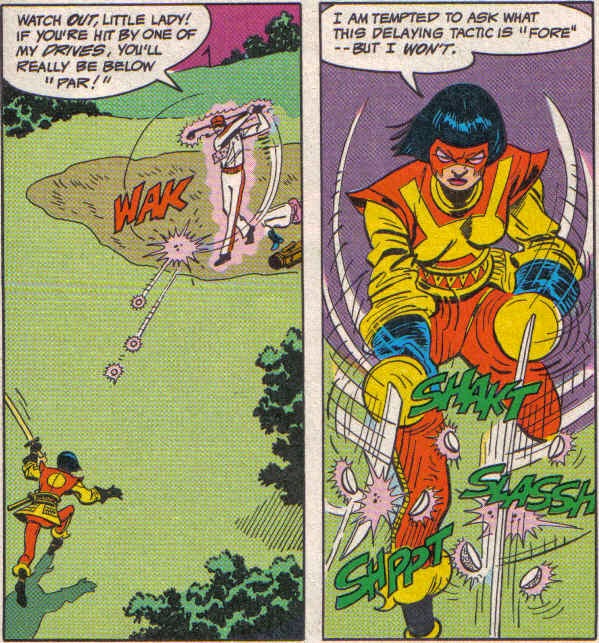 I’m not sure what's worse: the goofy weaponizing of golf balls or the inane pun that Katana counters with. Worse still is that she regrets doing it, but DOES IT ANYWAY. Remember Katana, ninjas are silent for a reason.

All goes badly and the Outsiders get their butts handed to them on a silver platter by a bunch of zany automations. This leaves the villains at full power, the Outsiders a man down and no clue how to stop them. It’s enough to make our youngest member zinger the new leader. 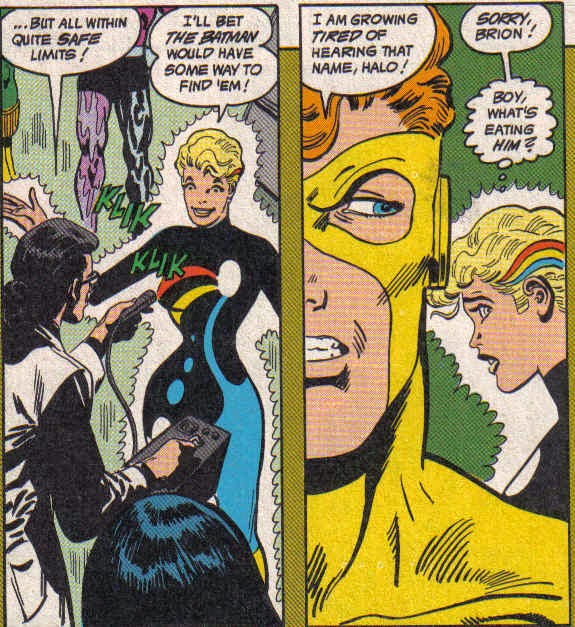 “Gee, Geo-Force, if Batman were still leader we’d have a clue what to do next.” I’m beginning to think my assessment of Halo having mild brain damage from dyeing those stripes on her head might be dead accurate. She may be leaving the Outsiders sooner than she thinks. Brion does come up with a plan however it’s overly complicated and nets them the environmentalist, who is hot-footing it out of town. She spills the beans on the prune’s hideout. The Outsiders arrive and free Looker, whos outfit has become all ripped. Not to fear, Halo’s here! My thoughts exactly Halo, my thoughts exactly! Making someone put that outfit on is kind of like cursing them. But enough about that, on to the final battle, where the Nuclear Family is perched atop the reactor about to blow it and LA. Suddenly Geo-Force and Metamorpho hatch a secret plan to stop them. 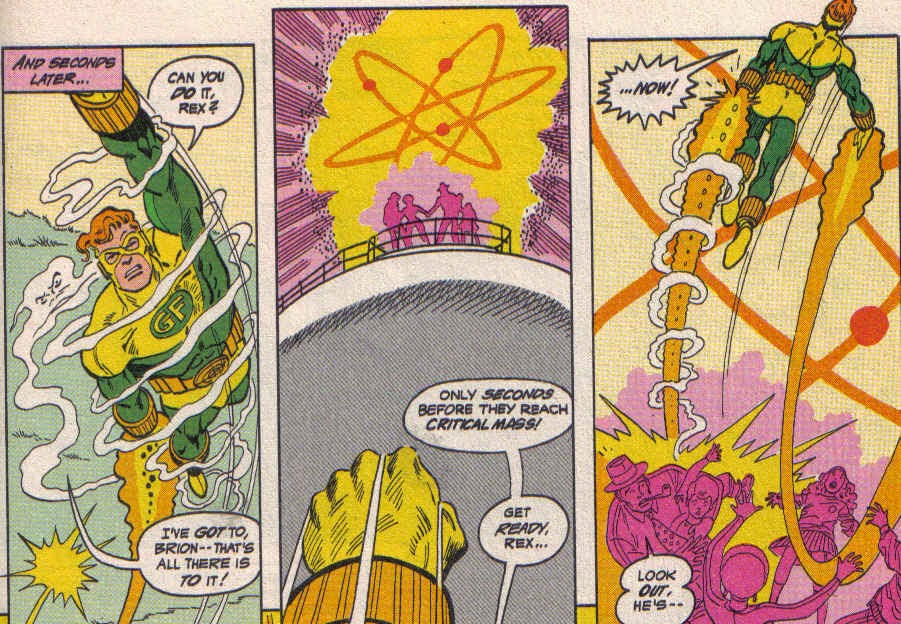 The plan succeeds! What was it? Metamorpho turned into TNT and blew them up. Now I’m not one to gripe, but couldn’t they have disassembled them in issue one when they had them all helpless? At least the story arc is over and they can get on to fighting better dressed, more upscale villains like Darkseid or the Anti-Monitor. 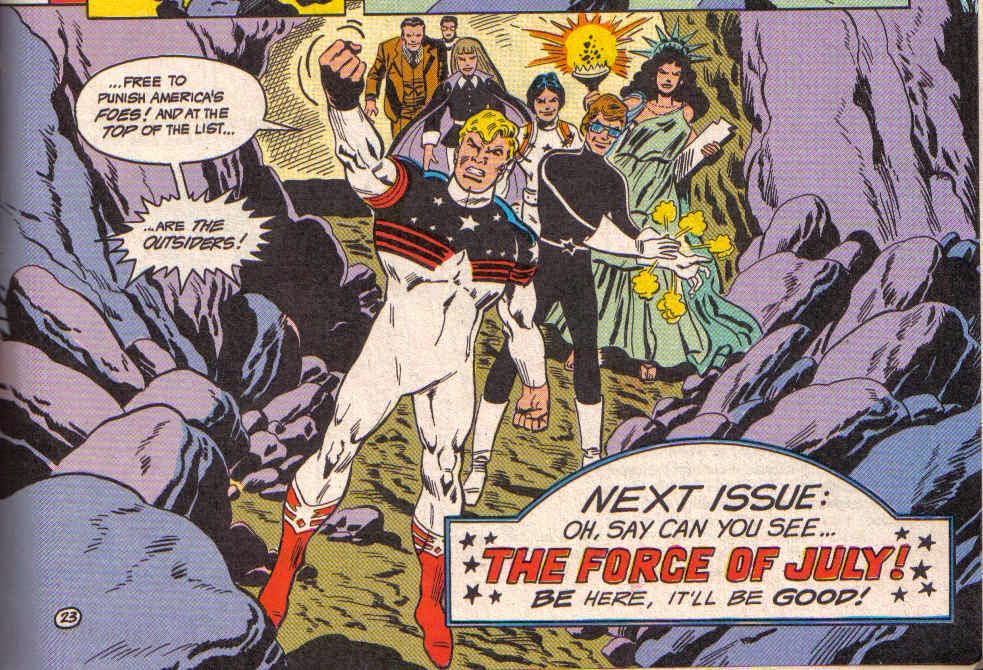