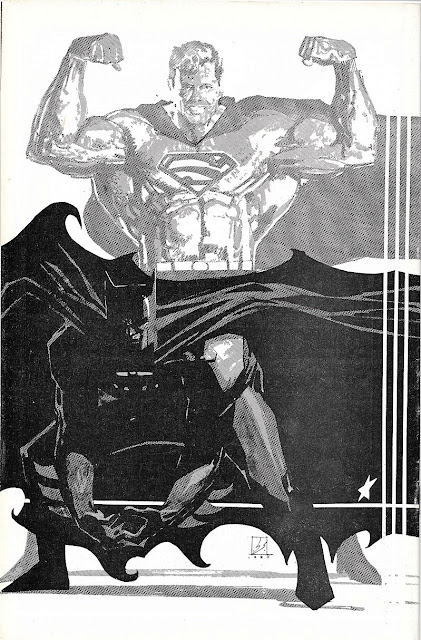 Back piece by Bill Sienkiewicz

Part 2 of diverse hands doing their best to come together for Africa!

We are back again for the last half of this patchwork quilt of a story. We left off with some good momentum. Let's see if that continues or if it fades down to boredom.

We jump back in with our heroes having to trust Luthor to help revitalize part of the African soil and help them defeat this "The Master" character. In a kind of dumb twist, writer Tony Isabella has both Superman and Batman play up to Luthor's ego to the point that they defer to his leadership. I will say that Curt Swan's pencils look great with John Byrne's inks. Swan's style was always ultra clean to the point of looking a bit too much like coloring book pages for me. I grew up on Swan and his Superman look is the one I always picture in my head. Byrne did one of the best takes on the character, however, and here he adds depth and shading to achieve a melding of their two styles. Sad there isn't more here than a black blot covering the Earth. 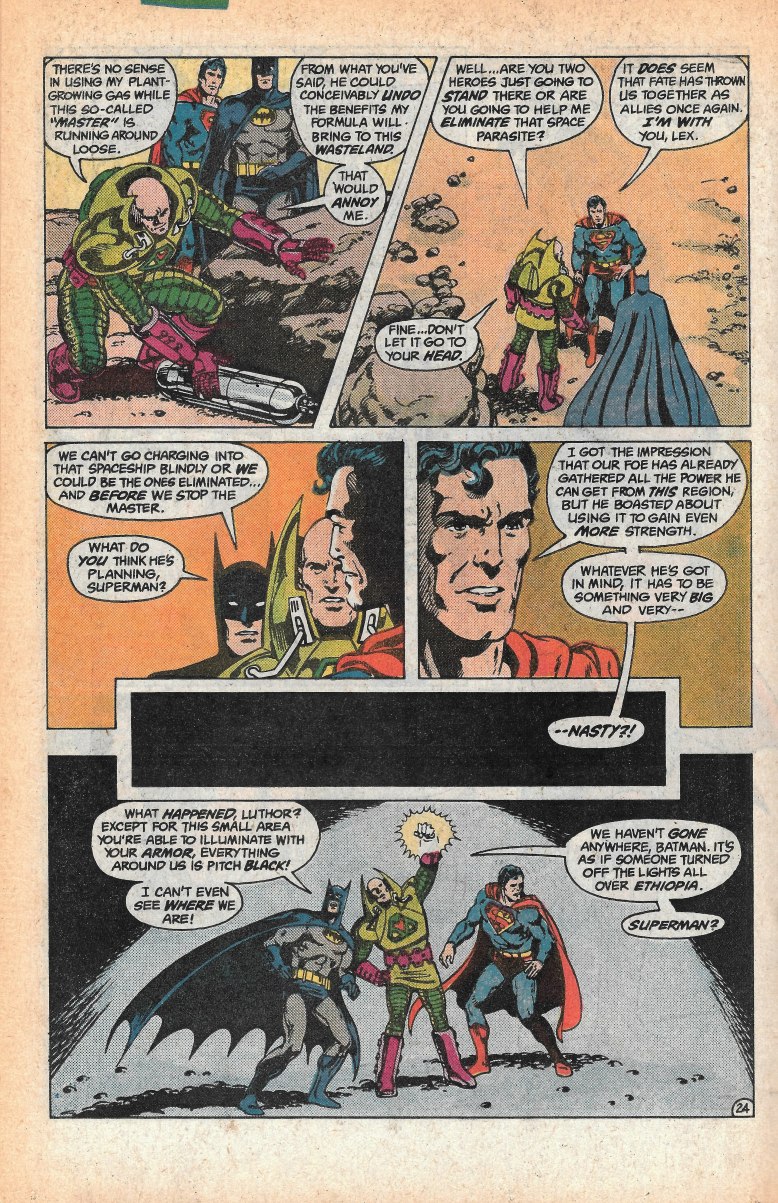 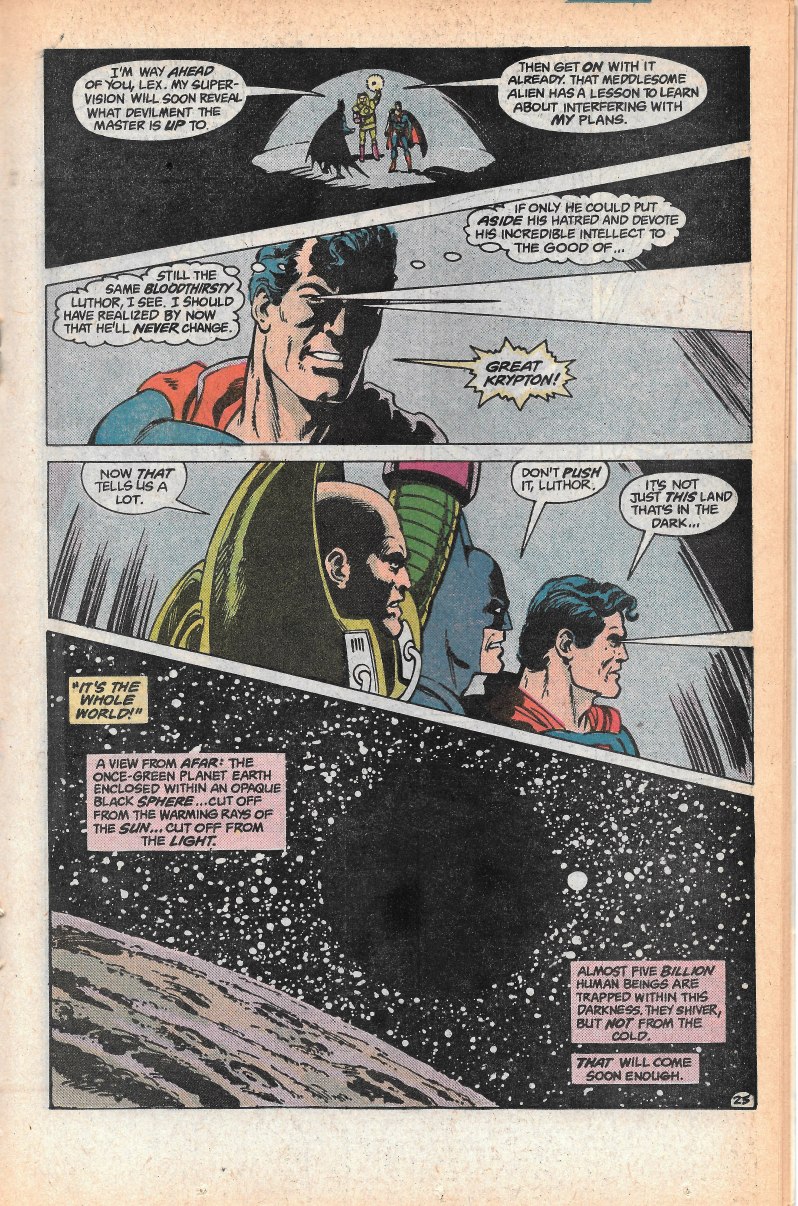 Just to make sure we don't forget why we are here, Gerry Conway does two pages of how this affects everyone, with lots of exposition and standing around. These panels come courtesy of the great Barry Windsor-Smith inked by Jeff Jones, and while well done, include that silly shot of Batman being carried by Superman. I guess he didn't have a backup Batplane. There is some heartstring tugging, on Luthor of all people, as we exit the final frame. 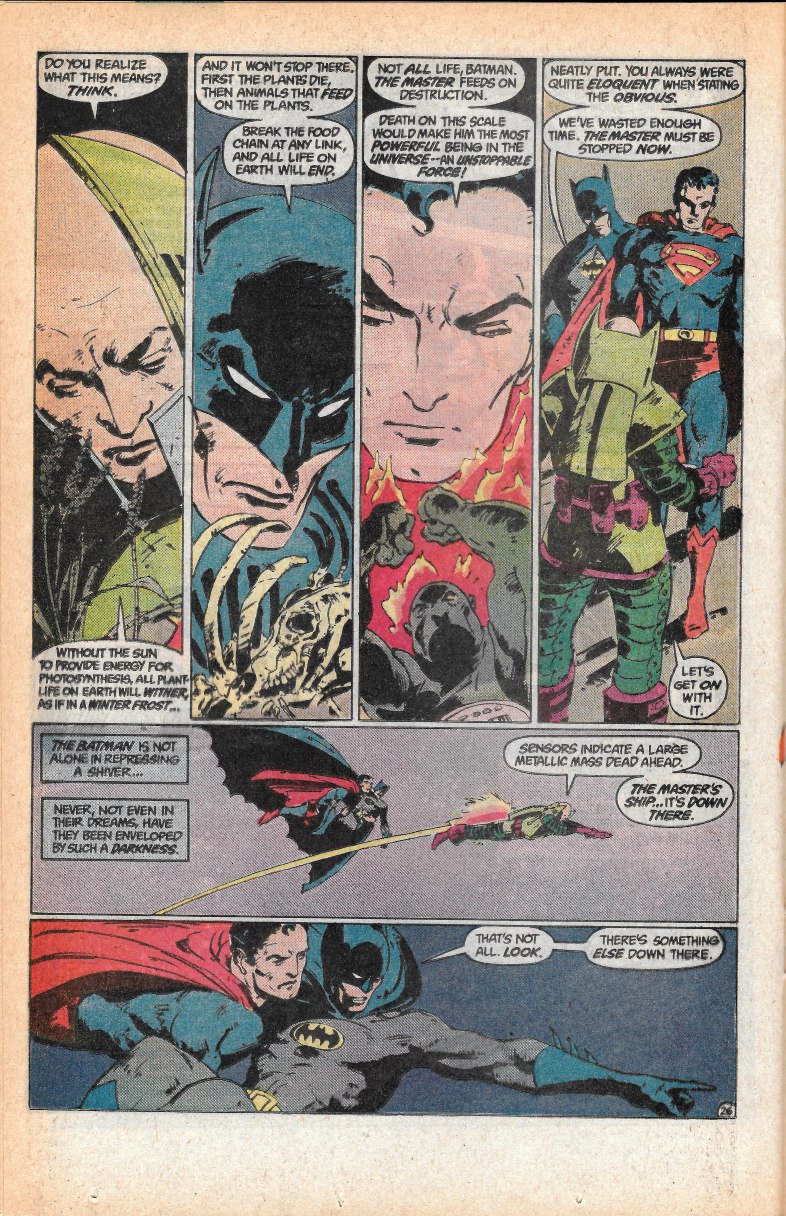 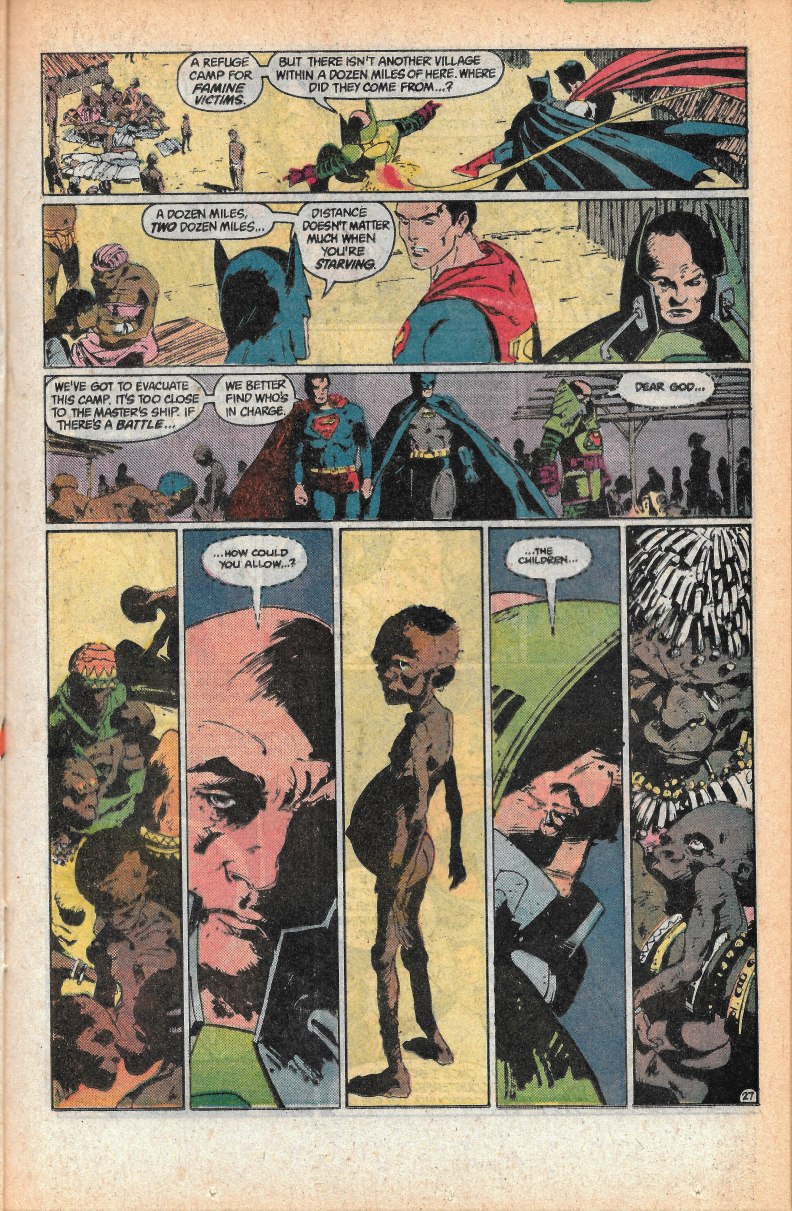 Between Conway's setup and Barbara Randall's follow-through on the next page, we go a huge step toward humanizing Luthor. Or making the crisis seem so hideous that even a world-conquering supervillain would do their utmost to correct it. Ernie Colon under Terry Austin's inks keep the flow intact, which after Windsor-Smith is no small thing, and we prep for the big end battle. 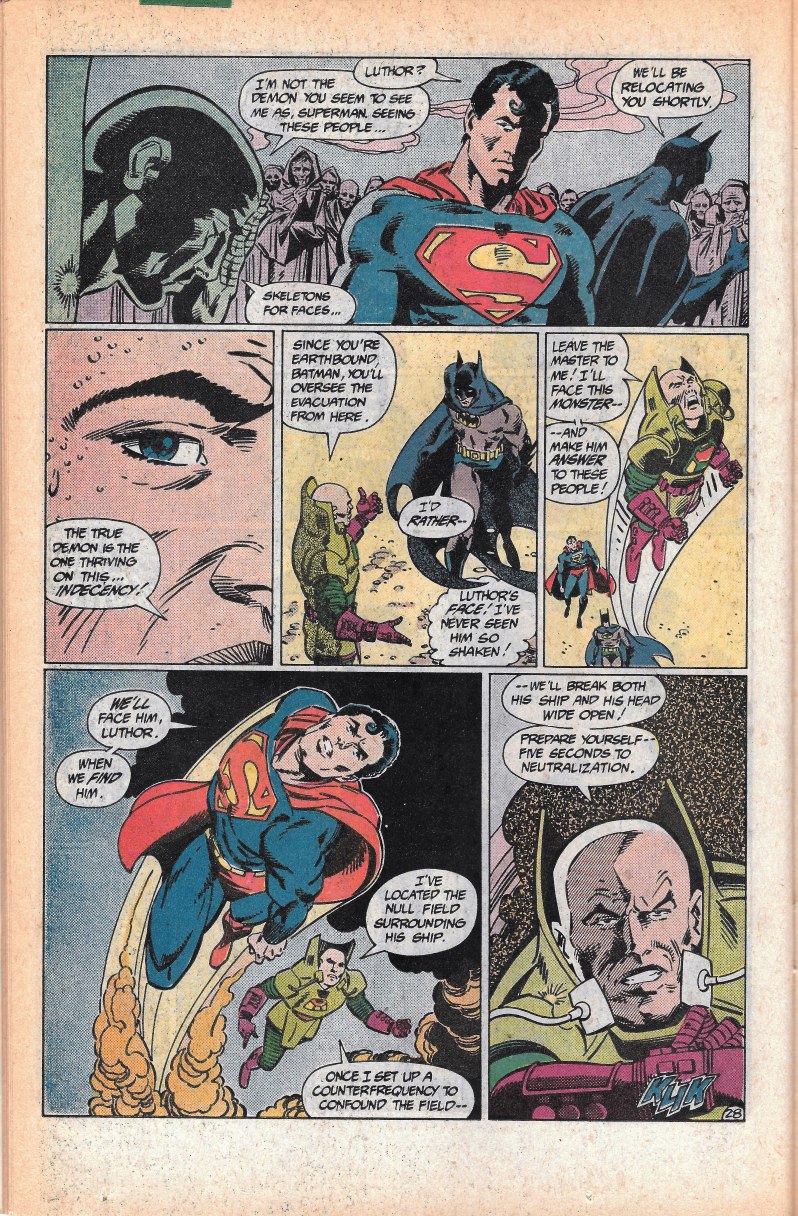 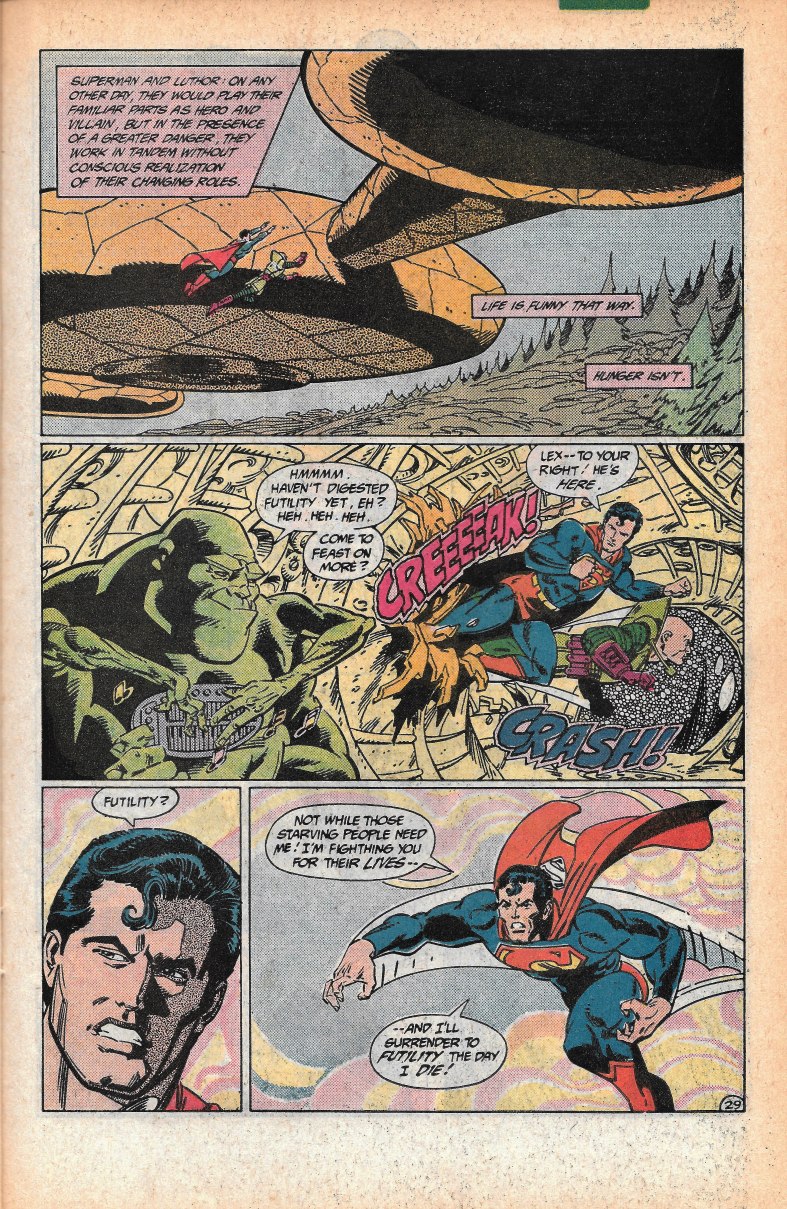 Andrew Helfer gives Superman a case of the old "trapped in another dimension" problem and then allows Luthor to get in his licks against The Master. These glorious battle panels are handled by a different set of drawing masters: the incomparable Walt Simonson on pencils and the stalwart Steve Leialoha on inks. BAWHOOMM! Indeed. 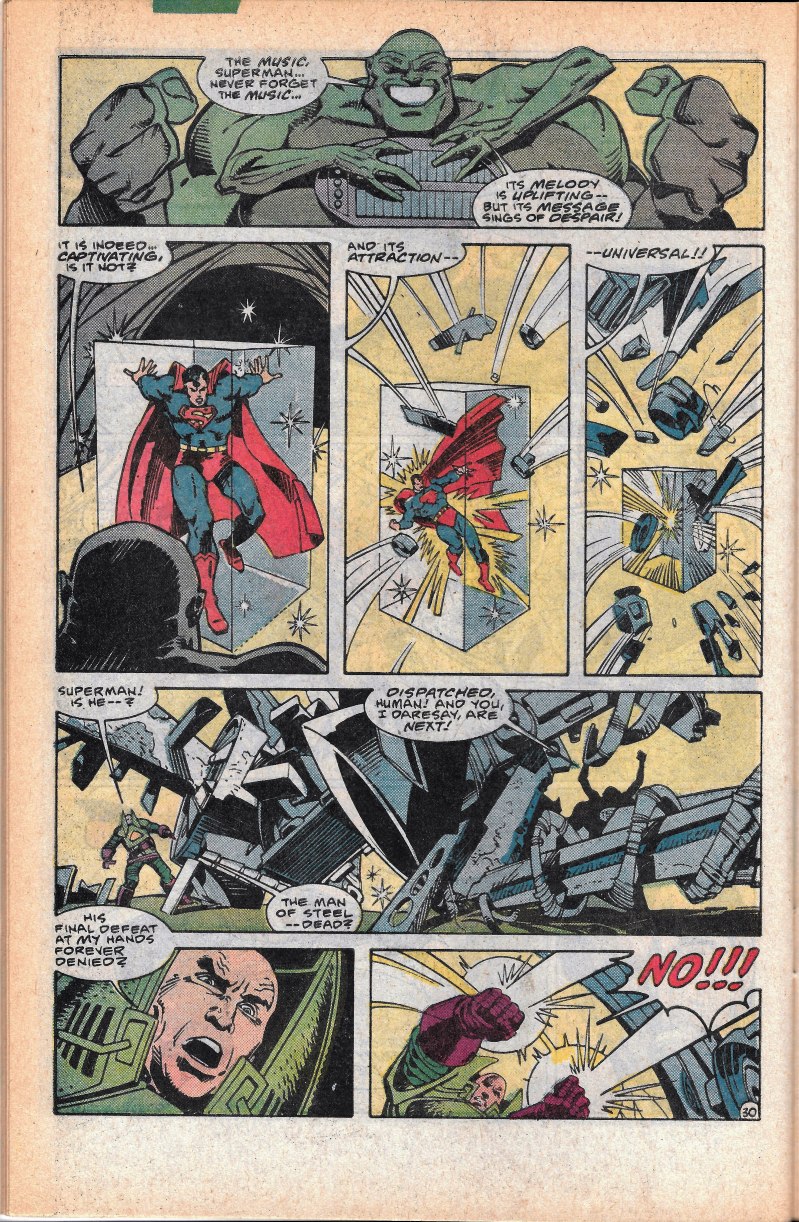 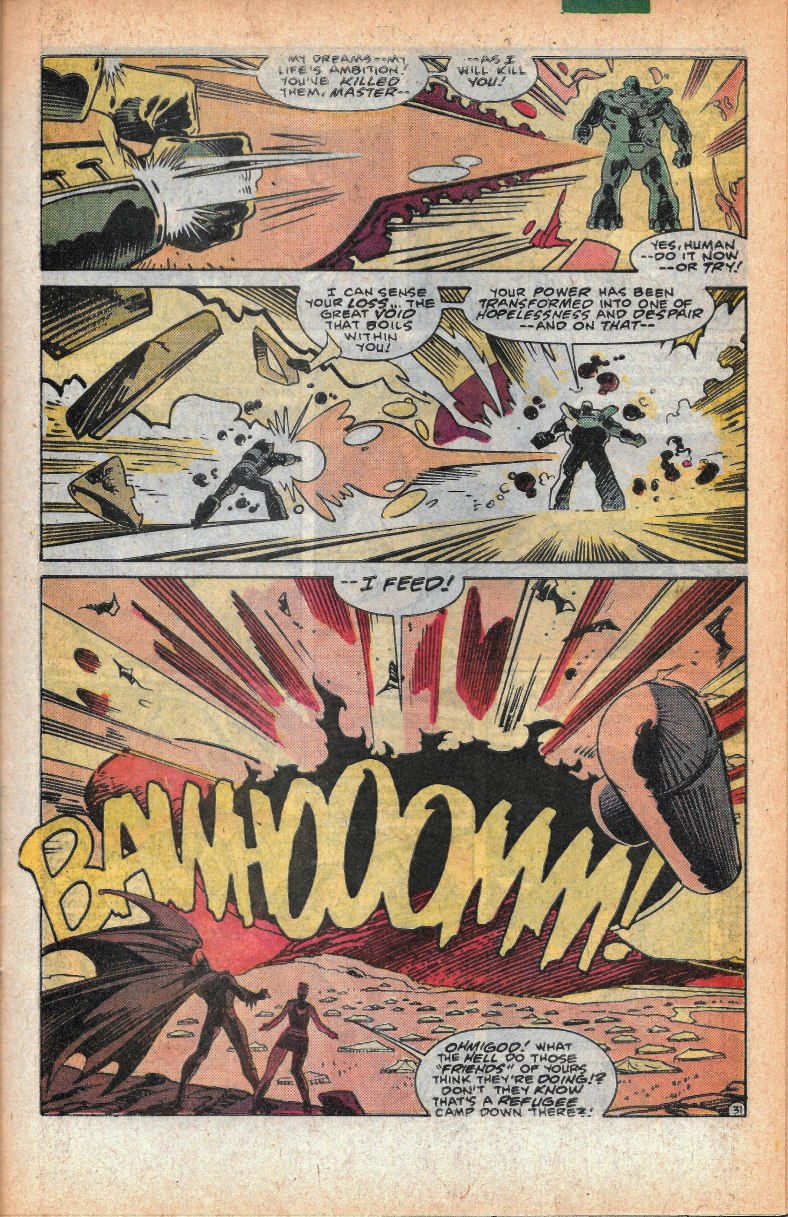 With everyone throwing out last ditch efforts to defeat The Master even at the cost of their own lives, Superman tries to find his way back. These two pages by Dan Mishkin emphasize that this is a team effort and no one hero or villain can defeat The Master. Edurardo Barreto does an excellent job on both Batman and Superman and why shouldn't he? His wonderful pencils are covered with Romeo Tanghal's magnificent inks. 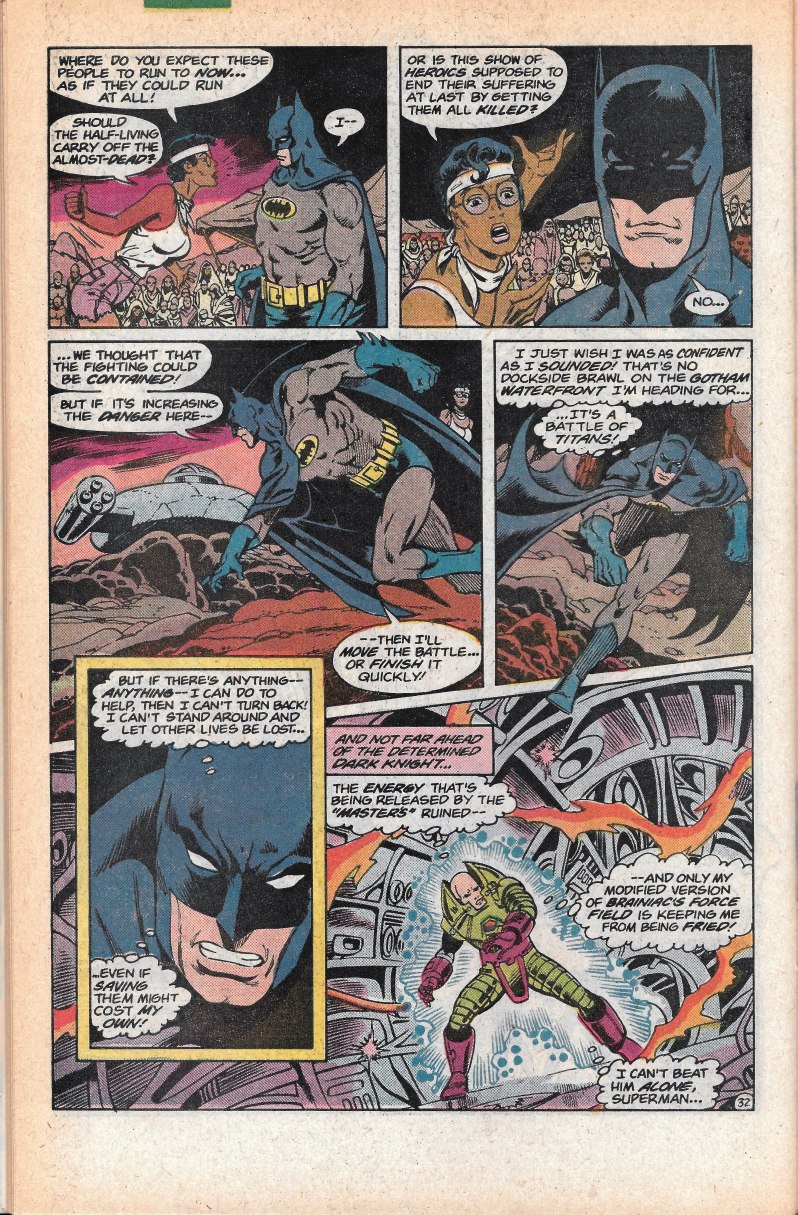 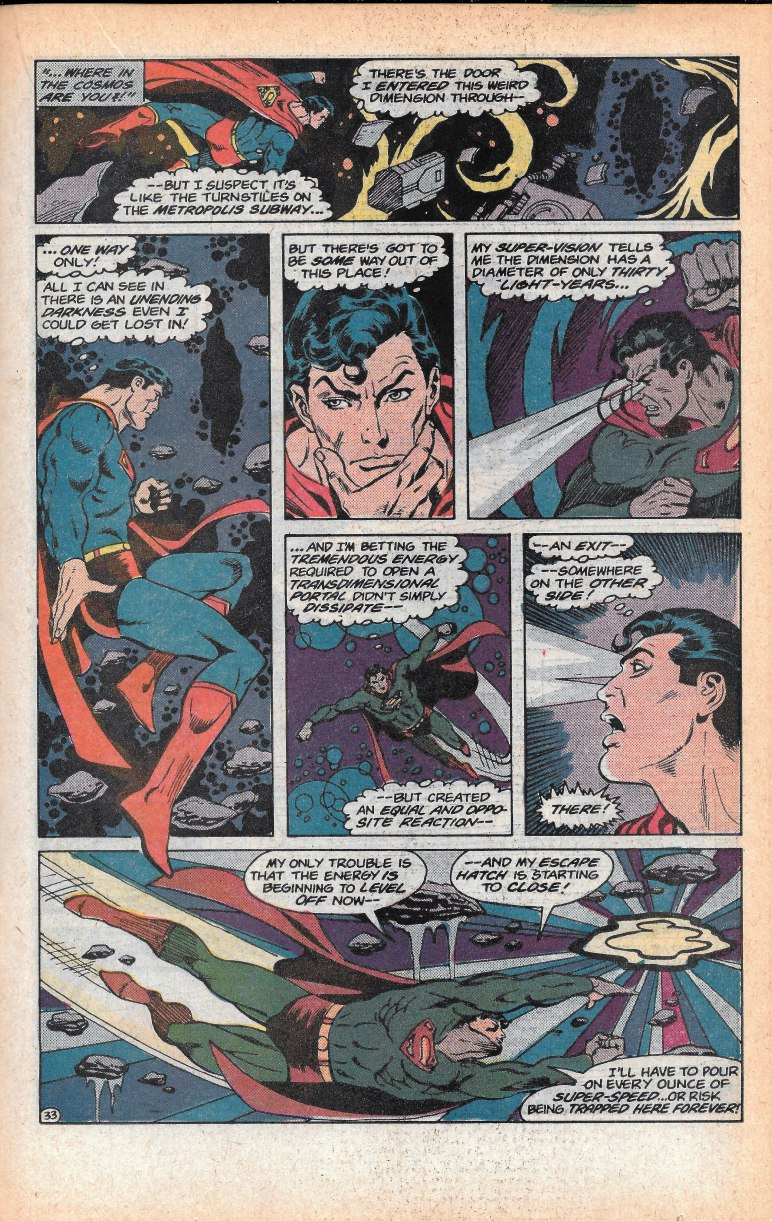 Dave Gibbons is tasked with drawing the Man of Steel out of his other-worldly prison. Sad that only gives him and inker Bruce Patterson one page to truly shine. Len Wein does an excellent narration job, it just seems a shame to not have Gibbons do more here than a bunch of speed lines. But one page of action is what we get with The Master unleashing some new deadly threat to our Superman/Luthor team-up. 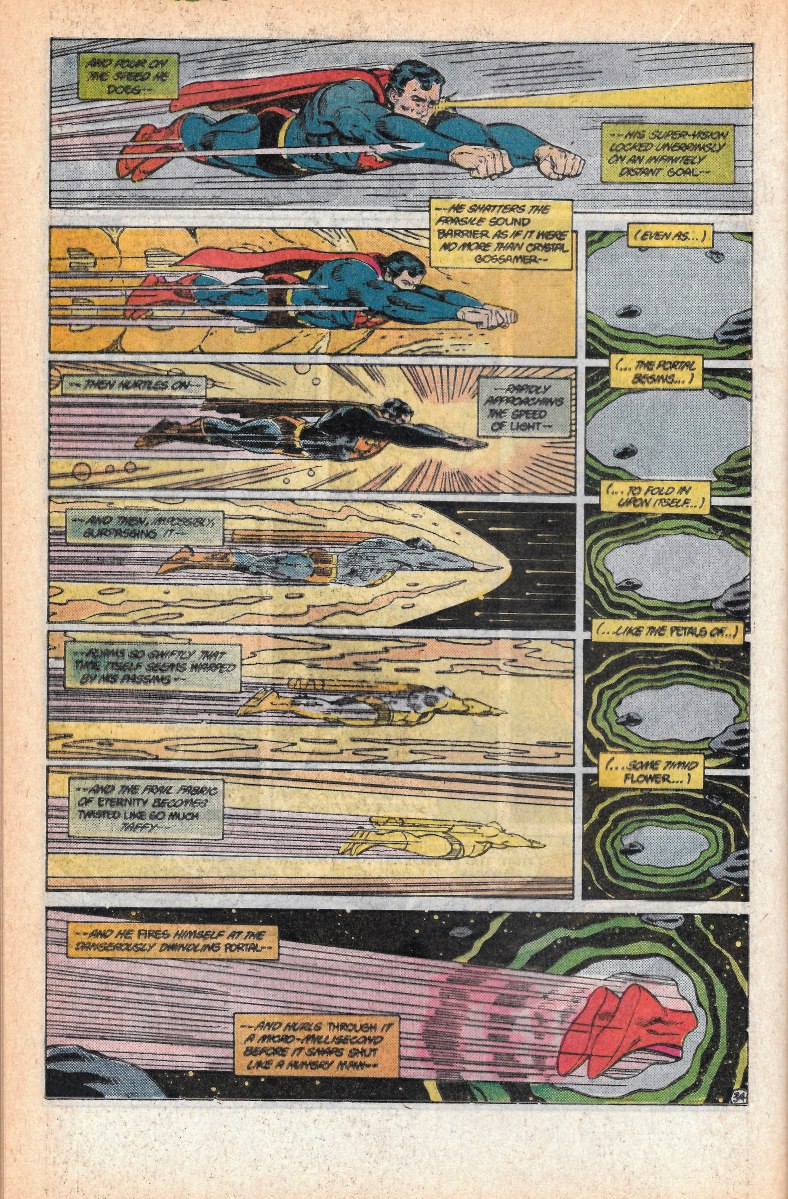 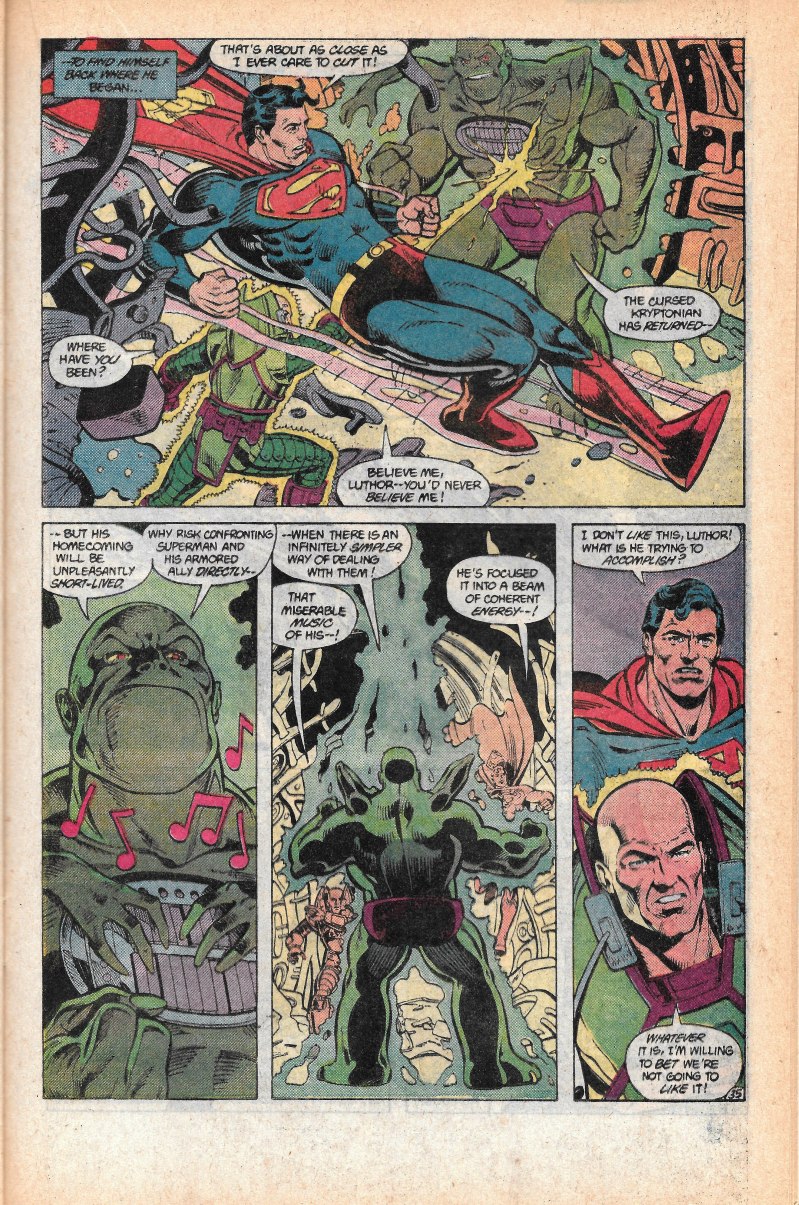 Jack "The King" Kirby throws down as only he can, unleashing giant fireballs and countering with Superman's power of speed and flight. Al Milgrom inks over his pencils, and his heavy hand complements Kirby's bold line style. This was a fine pairing. Ed Hannigan allows them to coast with some Luthor over the top exposition. Pages like this one and the Simonson one make you wish you had a full 22 pages by these match ups and not just the one in your hand. If Marvel or DC ever does this again they should have every artist matchup do the entire book and release each one. Same story, different artists. THAT would generate sales. 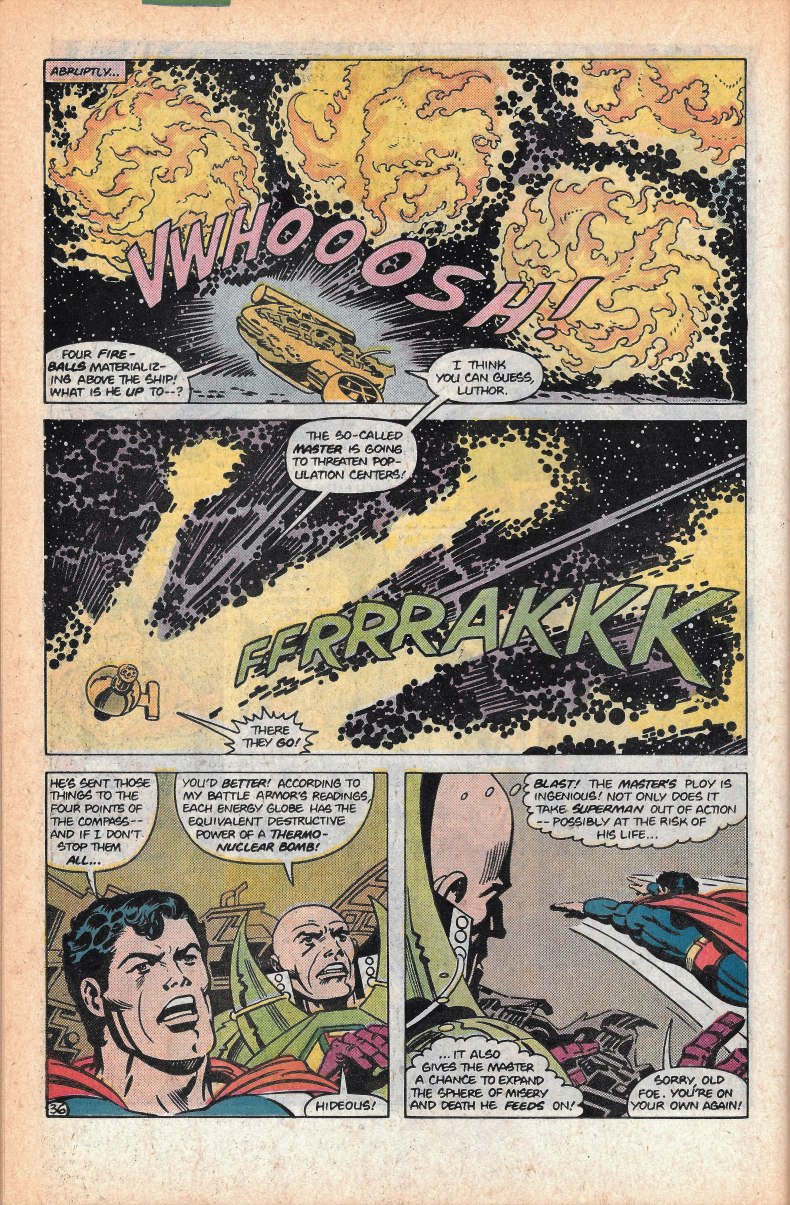 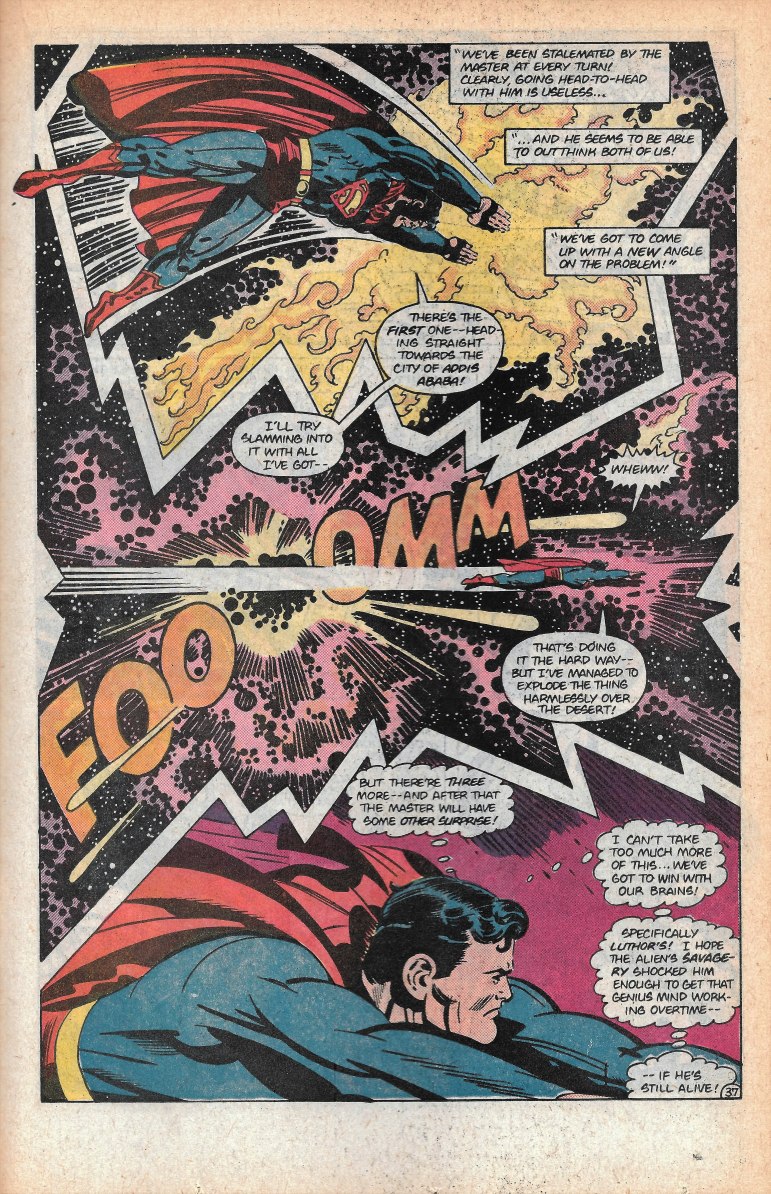 Apologize for the sloppy scan on the second one. Mindy Newell finally gets Batman into the fray, with some very passionate art by Tony Salmons inked by Tom Mandrake. I love the shots as they seem almost like Mark Badger, Kyle Baker, or Bill Sienkiewicz. Emotional, moving, filled with energy and rage, this is what I buy comics for. Panels that make you FEEL the story. 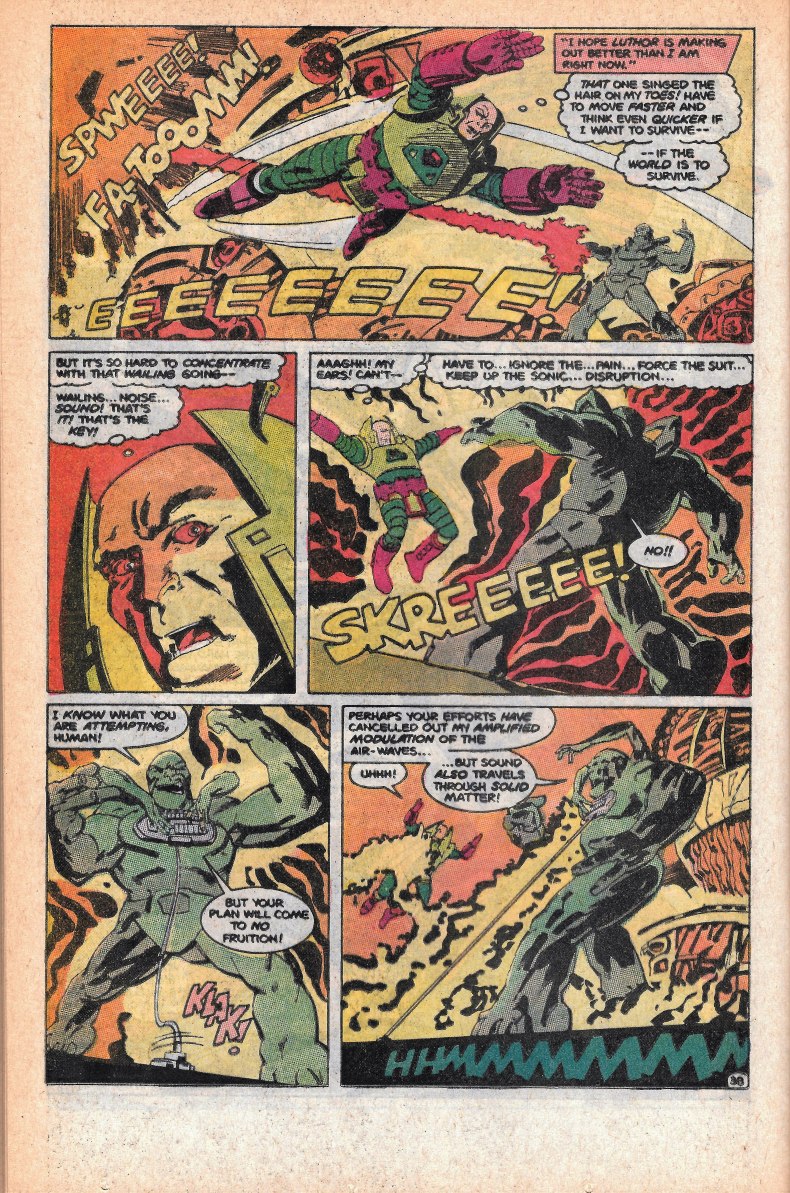 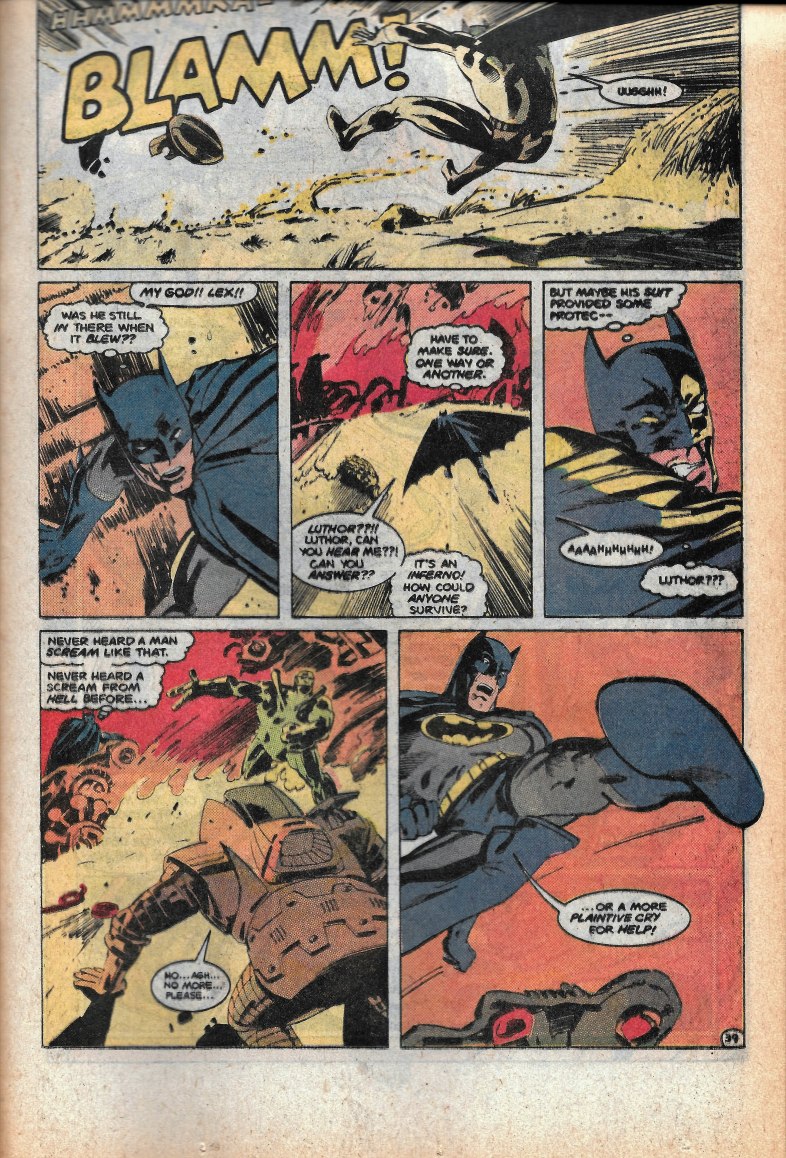 Then we are back with Dan Jurgens under Bill Wray's pen and a more standardized cartoon look and feel. I love both these men's work, just when juxtaposed as it is, it loses its advantages. There is a ton to be said for Jurgens clean, crisp style, and I'm a huge fan of that genre of art too. Just put side by side against more stylized pieces it makes you go up and down a rollercoaster of tone. Steve Englehart provides the words and I'm okay with that. I have a 50% chance of liking Englehart's stuff. There were moments in his GL run that I found un-amusing. This Superman last minute save works for me though, so… 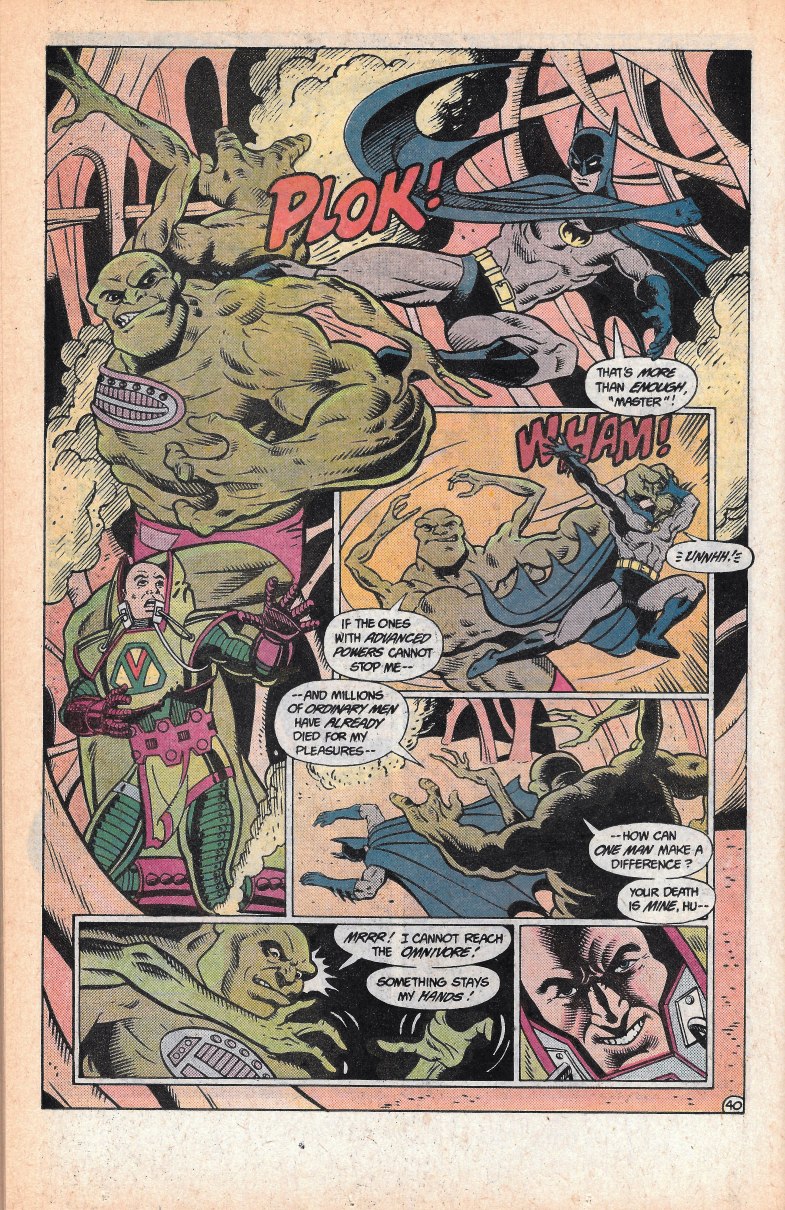 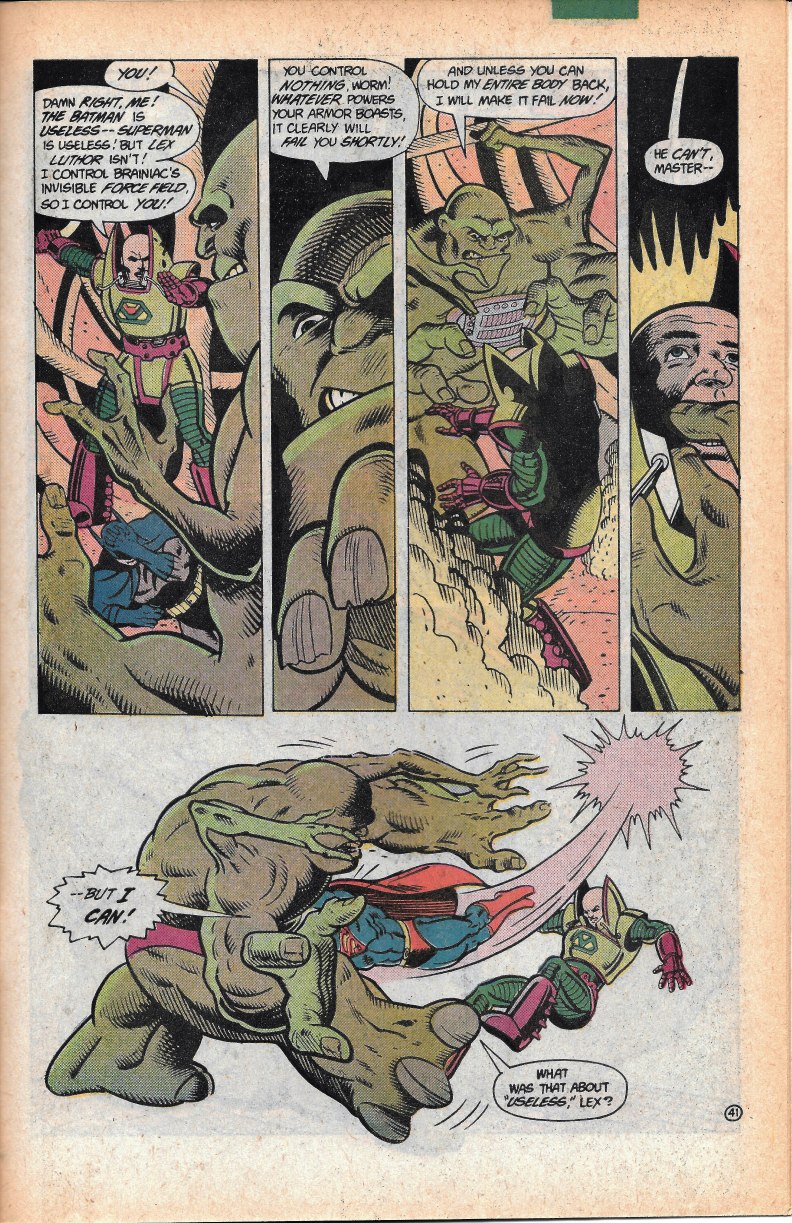 Now we move on to jolting Joe Kubert with Joe Rubinstein inks, as Joey Cavalieri scripts The Master's downfall.Note that Andy Kubert, Joe's son and an artist in his own right, provides the lettering here. Neat touch and I'm sure the Joey-Joe-Joe team up had to be someone's idea of cute. It works is all that matters, even though it seems like Supes could have done this very early on. 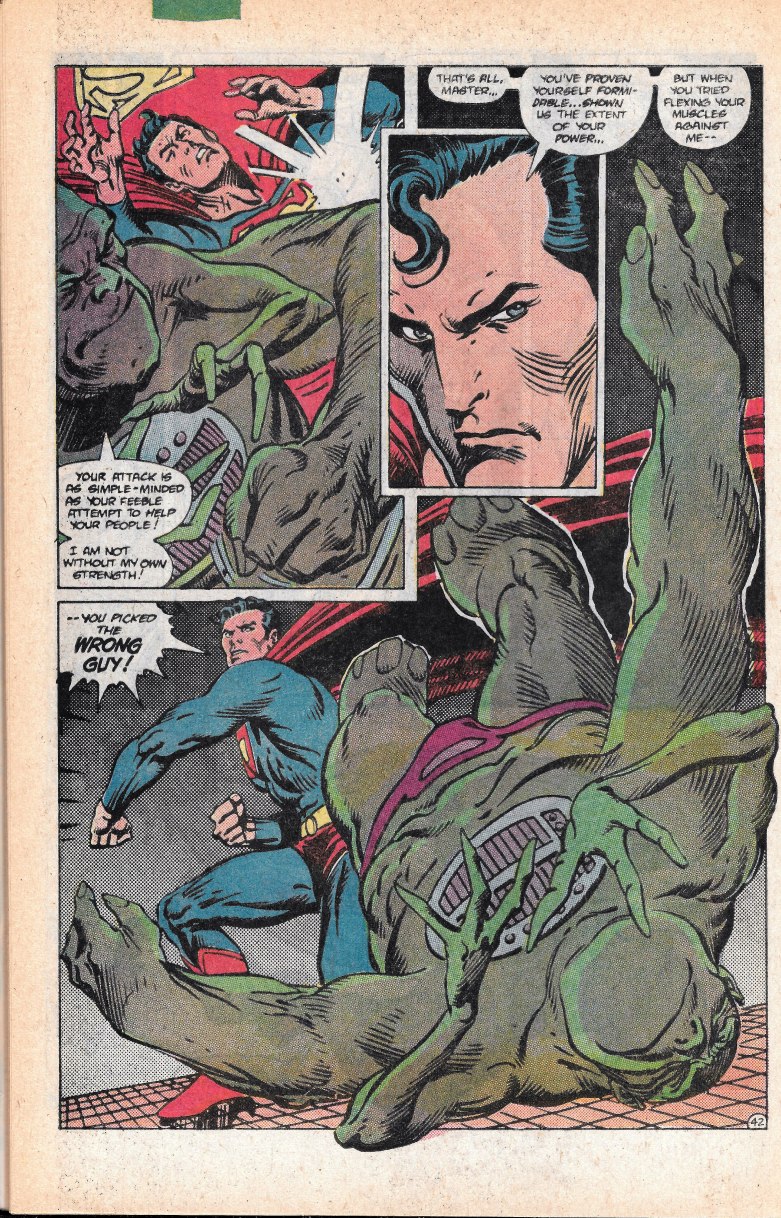 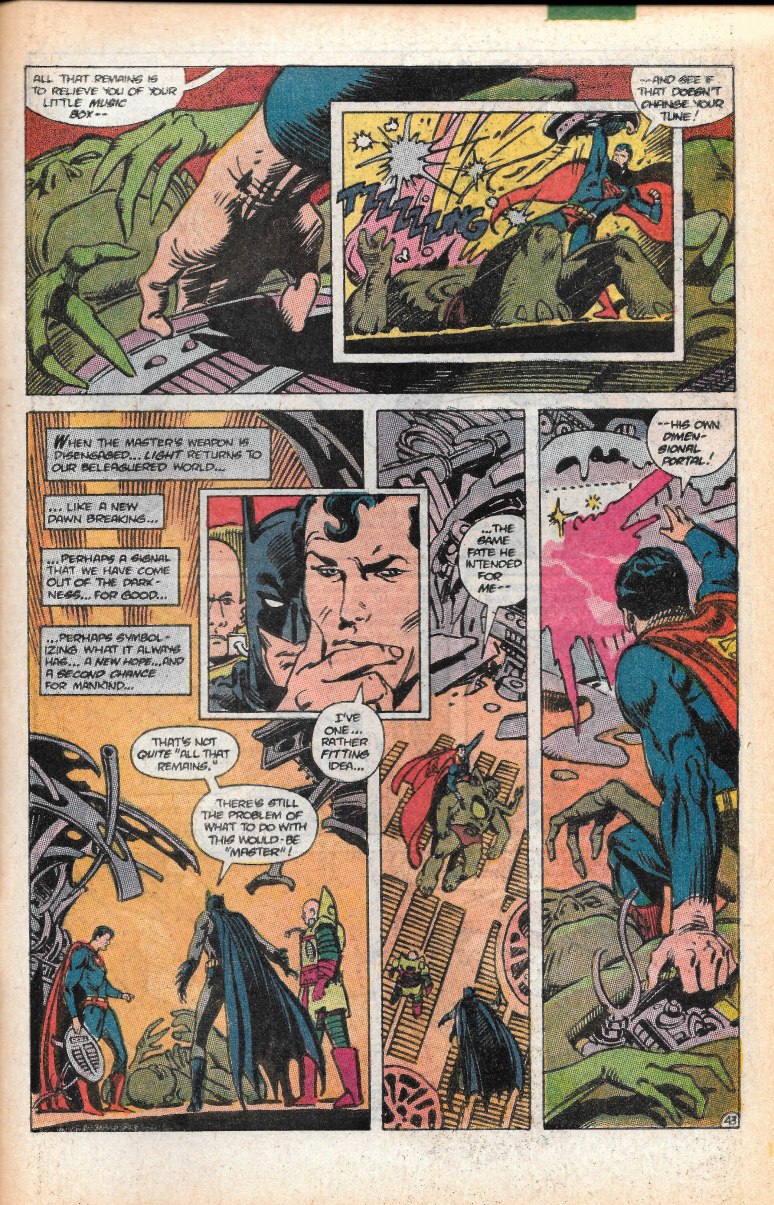 So we bid a final farewell to The Master and move on to giving Luthor a chance at making good on his promise. Paul Kupperberg is playing us out, and I'll get to him when I tackle Doom Patrol's storied past a bit later. As for art chores, David Ross is on pencils with inks by the Howard Chaykin. I don't recognize Ross (hush! I can only cram so many artists into my brain) but Chaykin's work is very well known to me. Here he plays off Ross's style in a good way, amounting to work that looks very little like Chaykins but still has some of his textures and line forms. 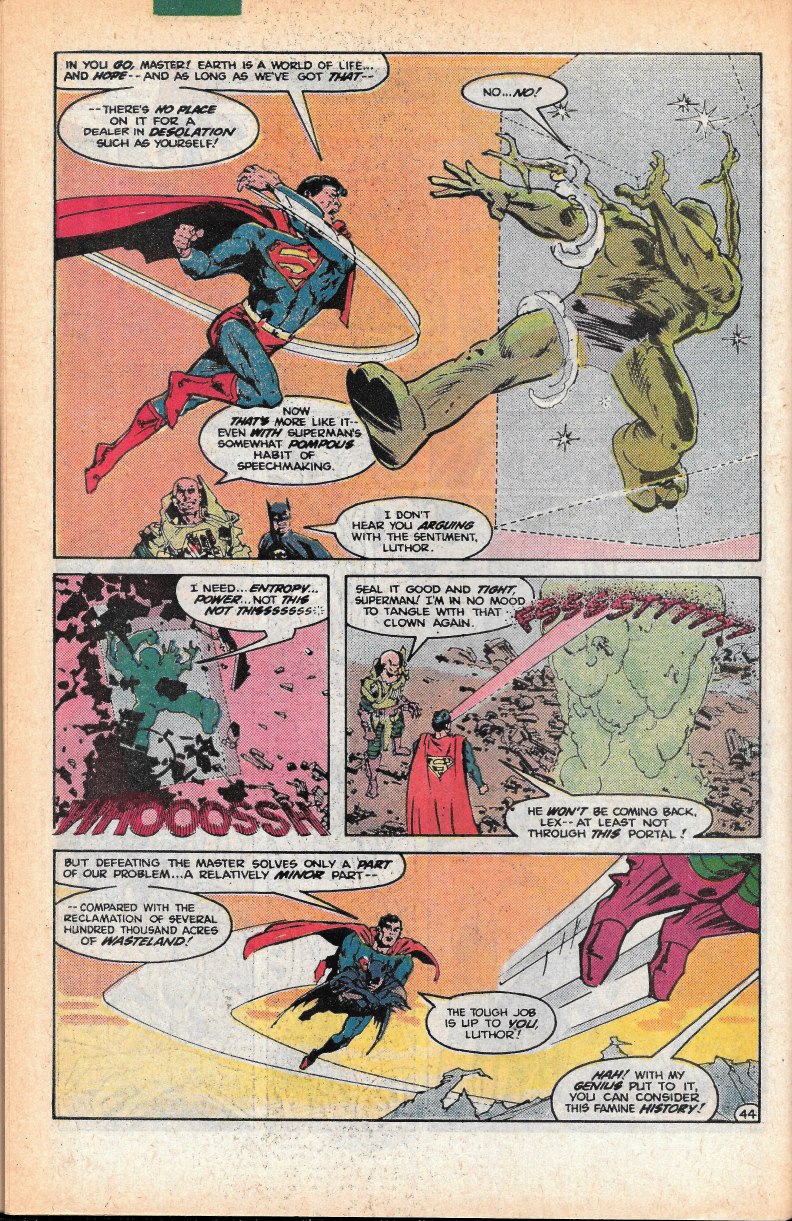 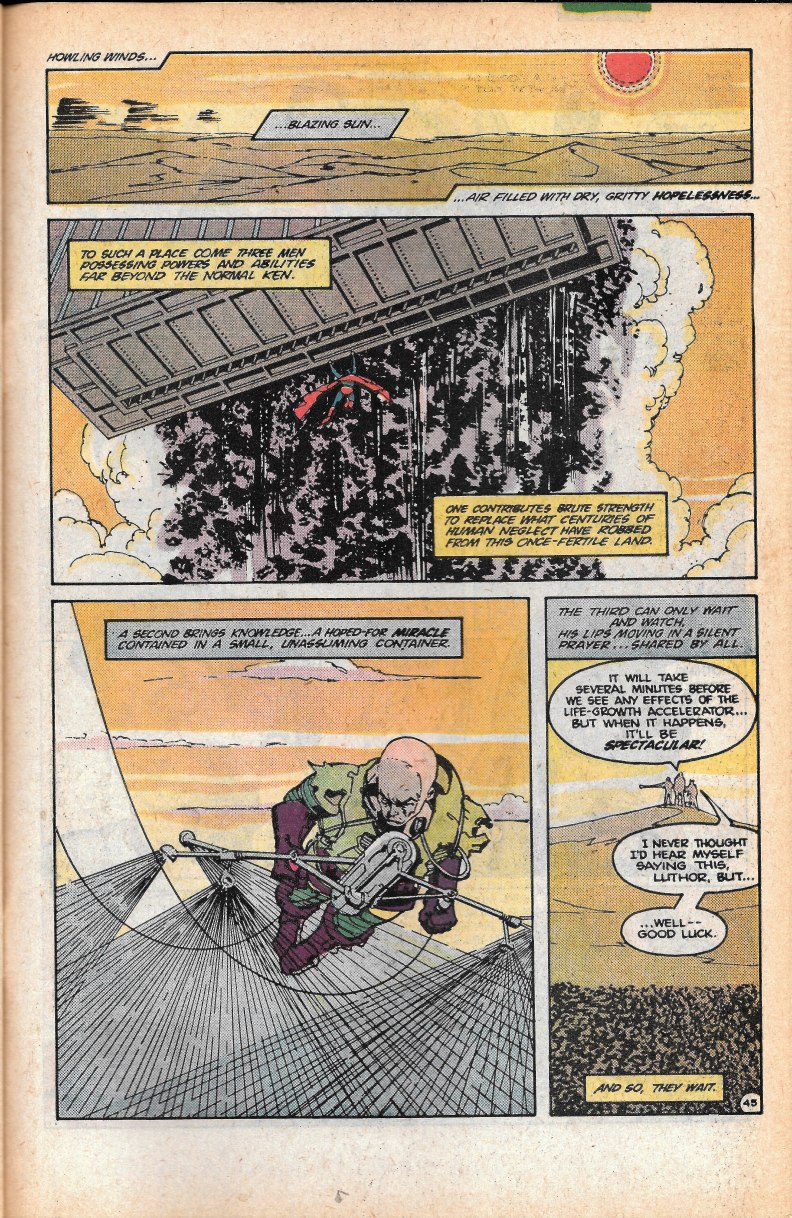 Then we hit our bump in the issue. Luthor's plan doesn't work. We get one of our talking heads from the beginning of the issue to come back to tell the heroes of the impossibility of the task. And here I have to say that I take offense to this. If the book is to do anything it is to fund projects built upon hope for brighter futures. Instead we get told this problem is too big for people who fix impossible problems every month. It is a sad commentary that Doug Moench hands down, and the panels of Jim Sherman's pencils inked by Greg Theakston and Alan Weiss are a bit overly dramatic. Way to miss sticking the landing guys. 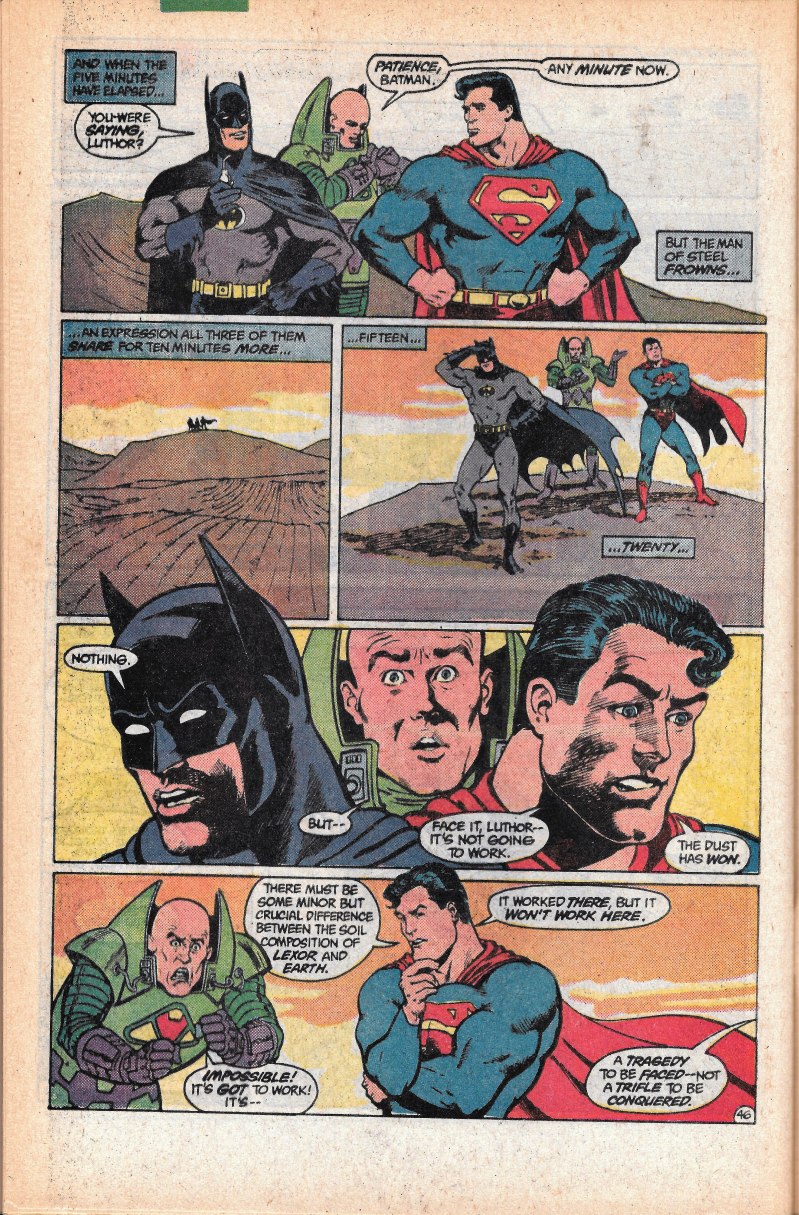 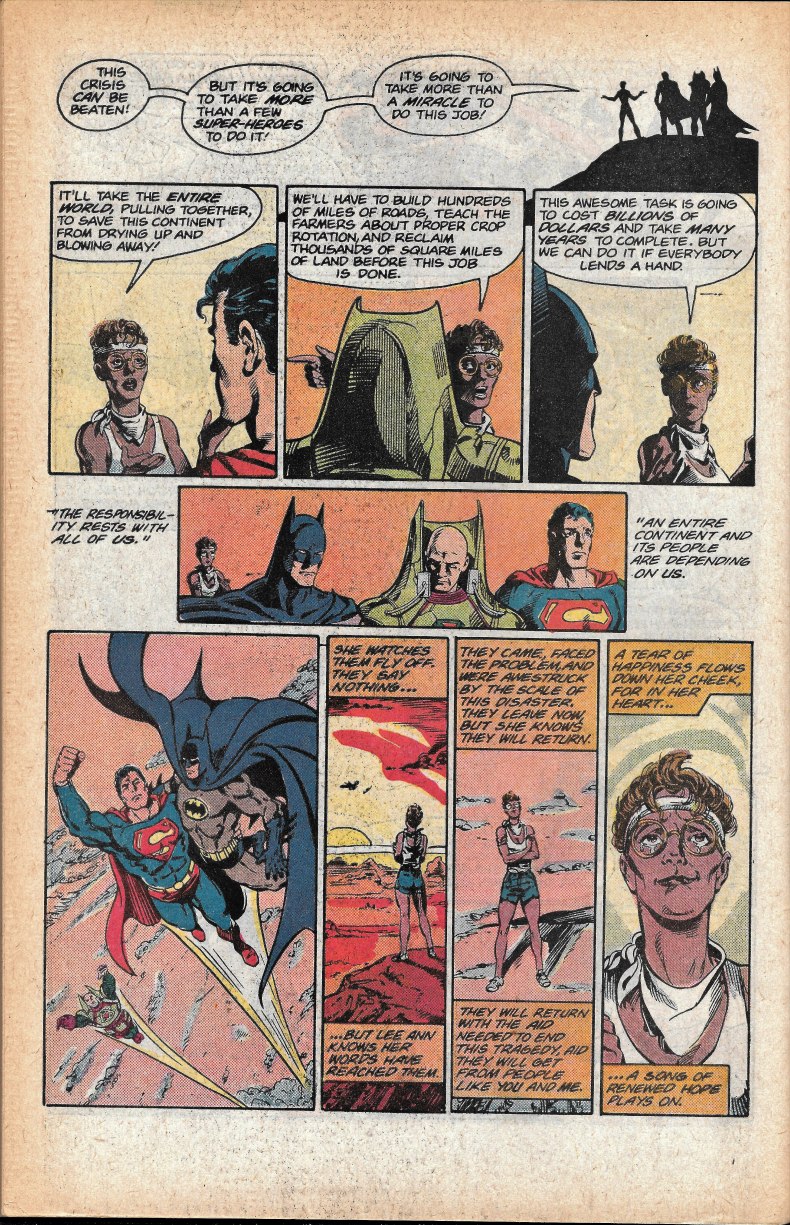 And the last page is Starlin-Perez-DeMulder that makes the task sound completely undoable. It will take a miracle to solve Africa's crisis. Glad to know my $1.50 did so little. 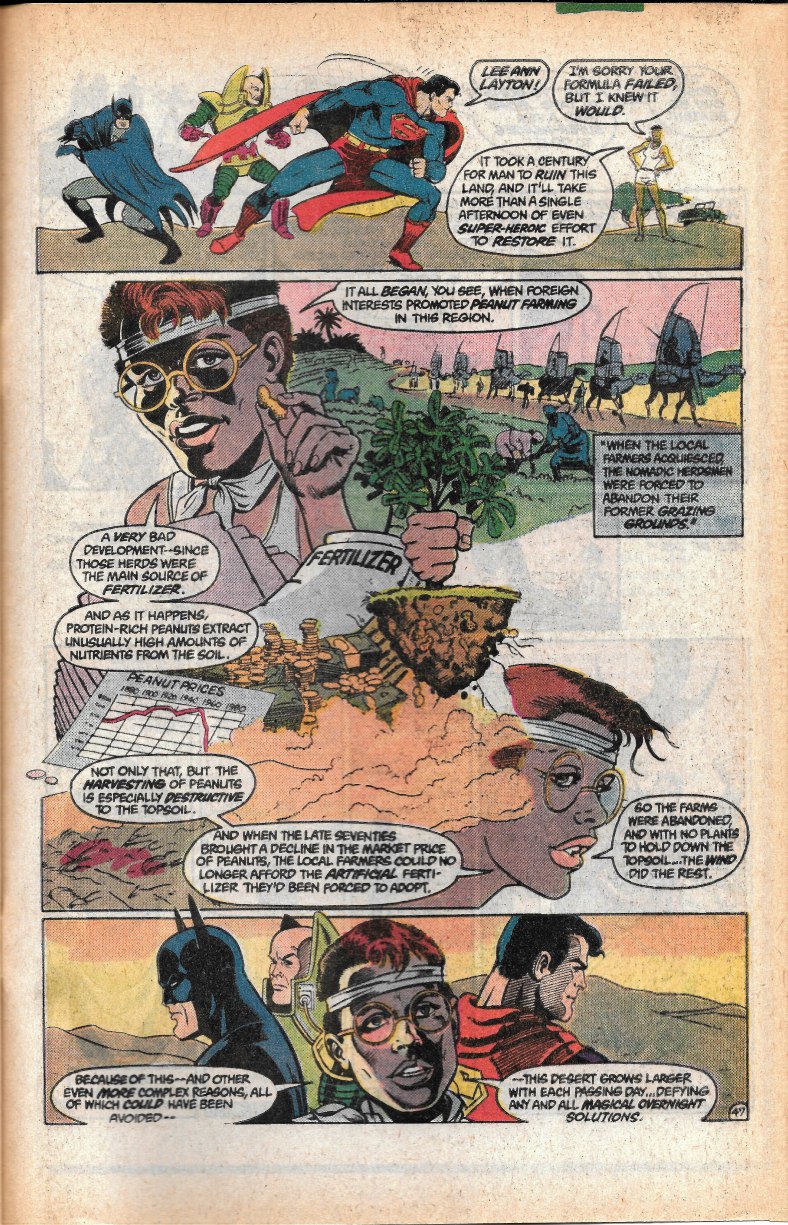 The issue ended on this letter from Dick where he credits LiveAid and Heroes for Hope for the start of this idea. He praises the collaborative effort and the need for assistance with famine relief in Africa. 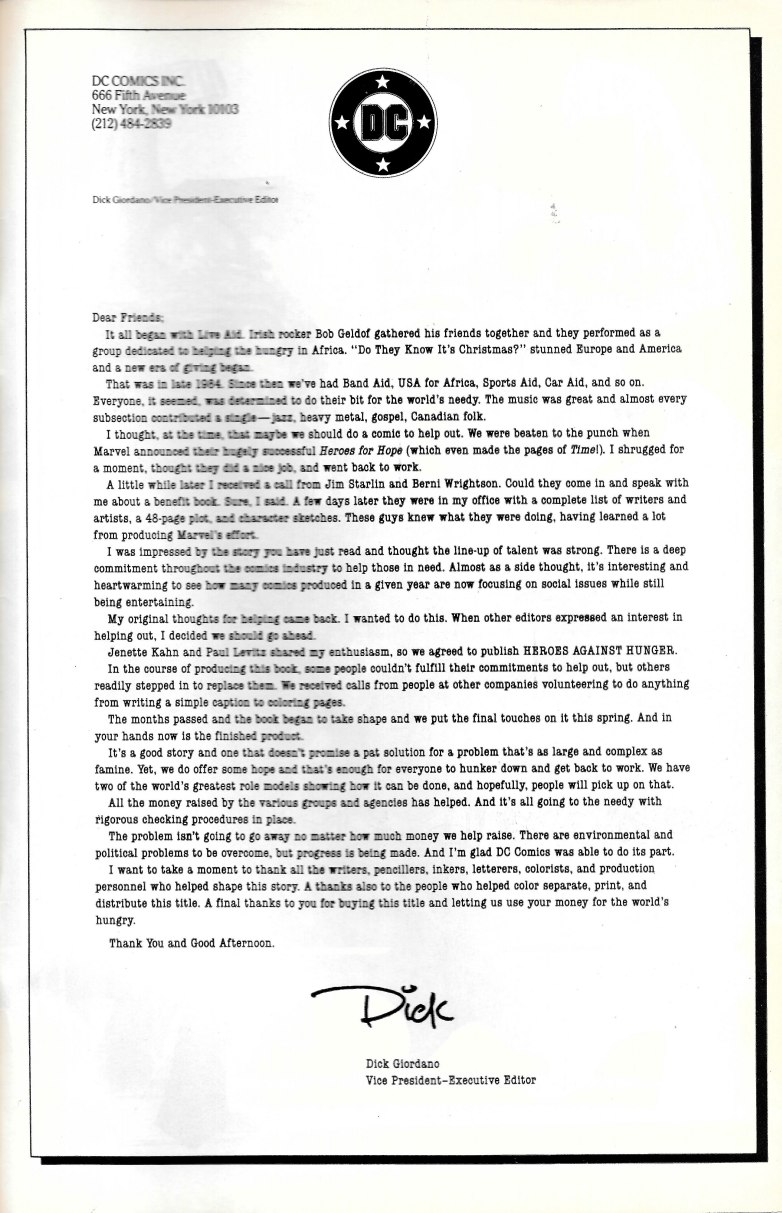 I've given a link in the last review to one such website that works to ensure adequate training and education occurs in this area, but I want to tackle something closer to home in this one.

And with that I am going to encourage you to support your local food bank with a gift of cash or goods that can mean the difference in starving people in your own neighborhoods receiving the food they need. The Feeding America Network supports local food banks as well takes cash donations and provides links for those in need to gain necessary assistance and meals. In this time of Thanksgiving, perhaps you can be the change in the world by helping out a starving family in need.

I hope all of you had a blast with this one and wish each and every one of you a fabulous turkey day.

PS: the Crapbox's new schedule may be a bit off in upcoming days as I settle in to a new house, but I will do my best to meet those Monday-Friday deadlines. THIS week, I hope to be serving you up something on Thursday. And I'll try to make it something other than turkey.
Posted by SonOfCthulhu at 4:01 PM