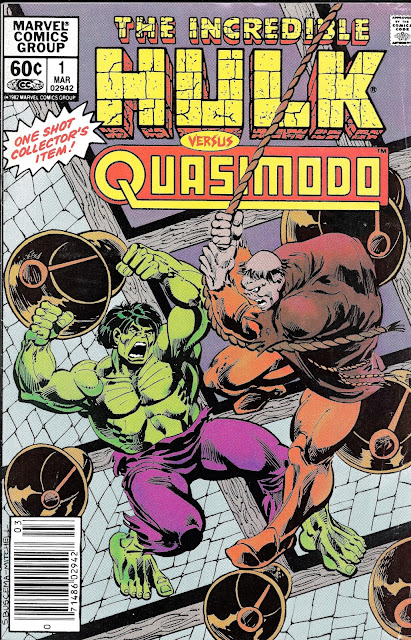 What's up next: Namor versus Moby Dick?

Again this has to be because I stored these books in a non-air-conditioned shed over the summer. This particular issue of The Incredible Hulk must of melted into one of those Classics Illustrated books on The Hunchback of Notre Dame. How else could we explain it?

I suppose it could have been a tie in comic for an animated TV episode of the same name. Mainly because that thing happened. This would have been 1982 and I was in high school, so that's probably a good reason why I don't recall this at all. Hulk cartoons were not my main focus at the time. (*ahem* GIRLS *ahem*)

Easy to see how I might have missed this. It was an episode of the 1982 Incredible Hulk TV show called "When Monsters Meet", and the book follows that plot faithfully. The book doesn't fit into Marvel 616 universe continuity and that's why Betty is a secret agent for her Dad, General Ross, why she hangs around with Bruce Banner like he isn't being hunted because he turns into the behemoth known as the Hulk, why his clothes magically stitch themselves back together when he turns back into Bruce Banner and why the whole mess appears to be so dog-gone contrived.

I'm not sure if Mantlo wrote the original script or if the writer of the TV episode, Arthur Browne Jr., did. Mantlo does work some magic in his narration of the action, enough to get us to forgive most of the goofy story elements that pop up. However, whichever person is responsible for the plot of this they have to know it is incredibly silly.

We begin with Stan Lee narrating an opening that kind of says "Put your brain on hold and just go with me here. We are going show you the Hulk fighting the Hunchback. Don't you want to see that? Okay, don't ask too many questions." 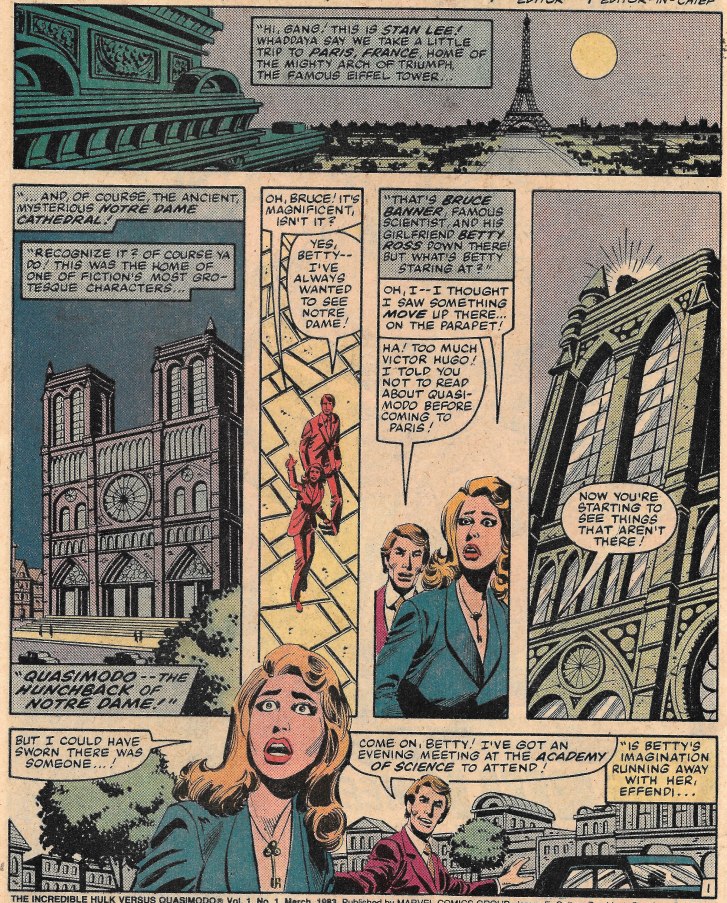 Betty has apparently indeed seen THE hunchback of Notre Dame himself, as we are introduced to him in a full page spread on the next page. 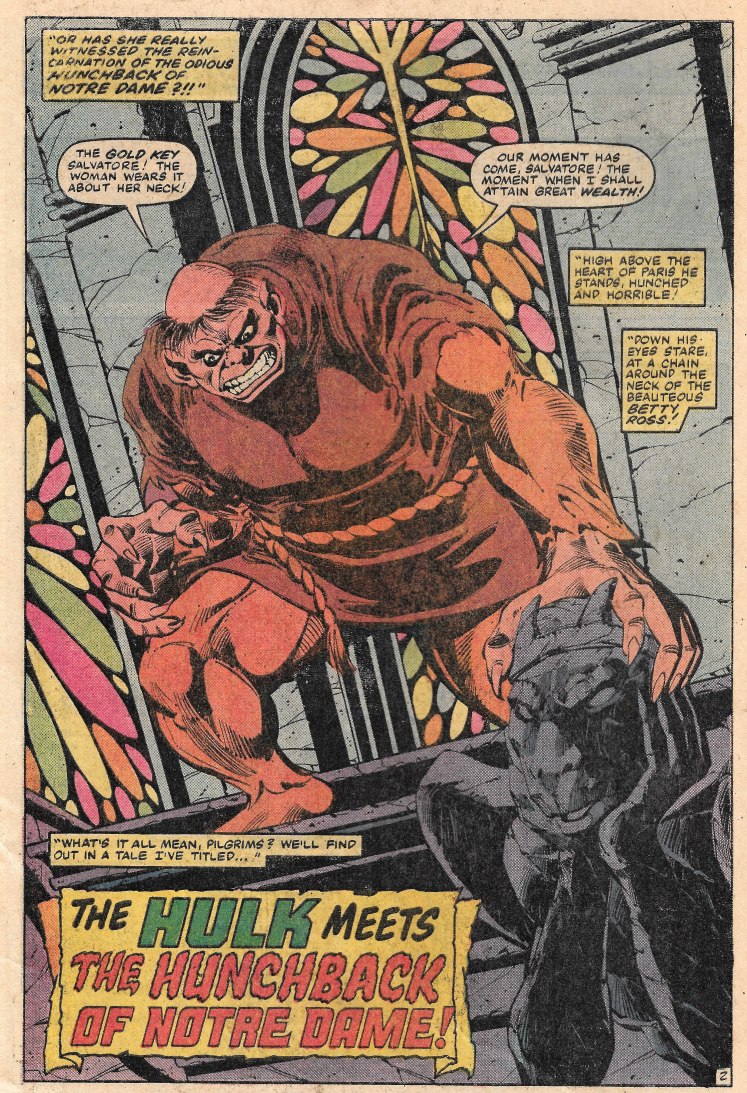 Stan's still narrating and glossing over the fact that the hunchback existed in 1482, still in the "just go with me here" mode. More fun on how Quasimodo is around in 1982 a bit later. But first, on to the MacGuffin part of the story. See Betty has a golden key around her neck…

…and that key is one half of what's needed to unlock a huge store of gold. While Quasi monologues to his friend Salvatore the giant, man-sized bat, we learn that this version of the hunchback is crafty, money-hungry and has an almost evil moral bent. As he plots to either get Betty to give him the key or die, we turn back to our happy couple. 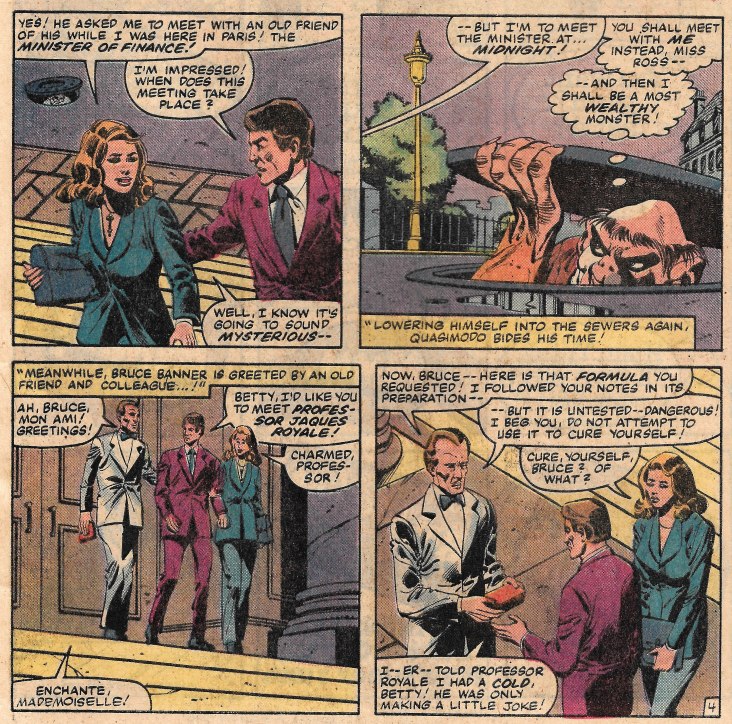 Betty spills a little of the beans about being here to meet the Minister of Finance, but not why. Bruce appears to be concealing something too, the fact that he's the Hulk and he's trying to cure himself.

As both of them go their separate ways for the evening, THIS happens: 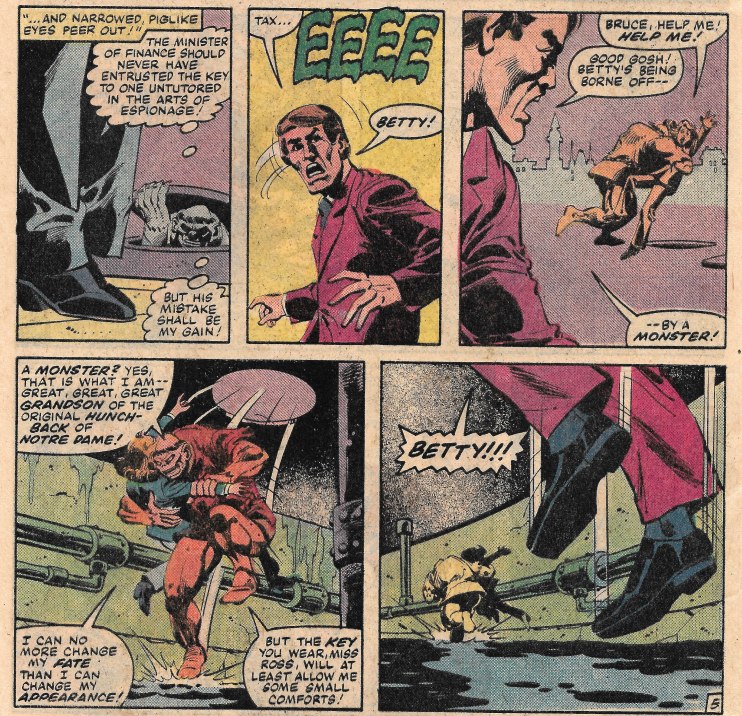 That's right, Betty gets hunchback-napped and then taken on an exclusive tour of Paris' marvelous sewer system. With Bruce in hot but slow pursuit, Quasimodo explains that he is the great, great, great, grandson of the original hunchback of Norte Dame, a story that holds as much water as a colander.

First (spoilers on the non-Disney Hunchback ending) in the original story the ORIGINAL hunchback dies at the end of the book. And they don't mention him getting jiggy with Esmeralda WHO ALSO dies before book's end. I'm pretty sure that the original Quasi was NOT the exception when it came to women throwing themselves at horrifically disfigured bell-ringing muscians, so Esmeralda would have probably been the only woman he ever had a chance with.

But for the sake of this weird argument…

So he is the fifth generation removed from someone alive in the 1400's. Okay, I'll buy that. The math of that seems about right, if these were long lived people having kids in their latter years. That seems almost plausible.

But for him to have the exact deformity and be named the same as his famous ancestor? Doesn't that just seem like his parents were exceptionally cruel? And part of me wants to imagine his entire lineage was all gypsies and hunchbacks, as if Quasi's looks were the rule and not an abberation.

It's all too much to really put your head around for a comic book based off of one episode of a Saturday morning cartoon. I'm sure the producers were really just trying to get the little tykes of 1982 to turn off their TVs and read a freakin' book once in a while.

However the inner-workings of THIS Hulk universe works, we have a Quasimodo. And this hunchback takes Betty to his secret jail cell under the cathedral and locks her in. Bruce is in hot, but also slow, pursuit still. 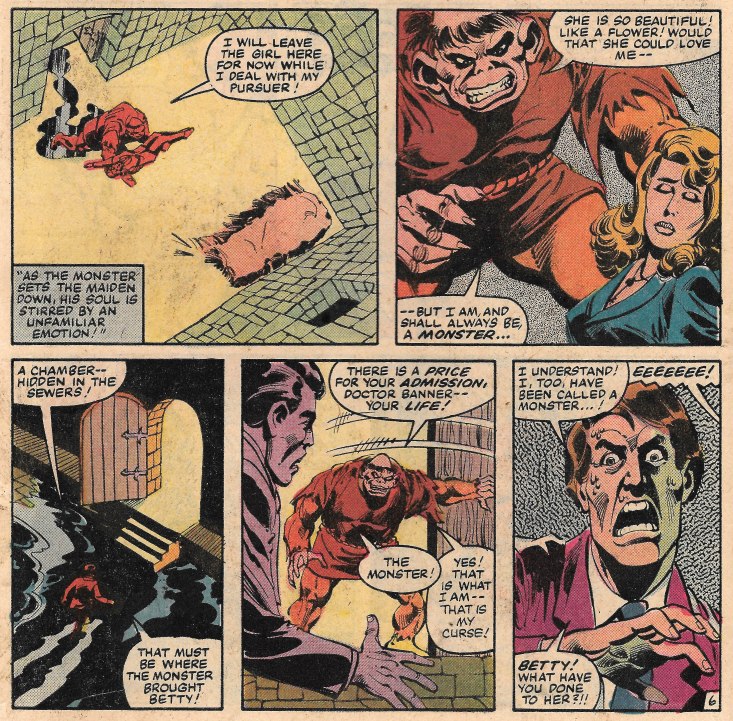 And as Bruce freaks out over what might have befallen Betty at the hands of THIS particular monster, we get that familiar feeling and the part of us alive in 1978 all hear the same thing…

Well, okay. Maybe just me. Many of you are more used to the new "hulkout" from Avengers. 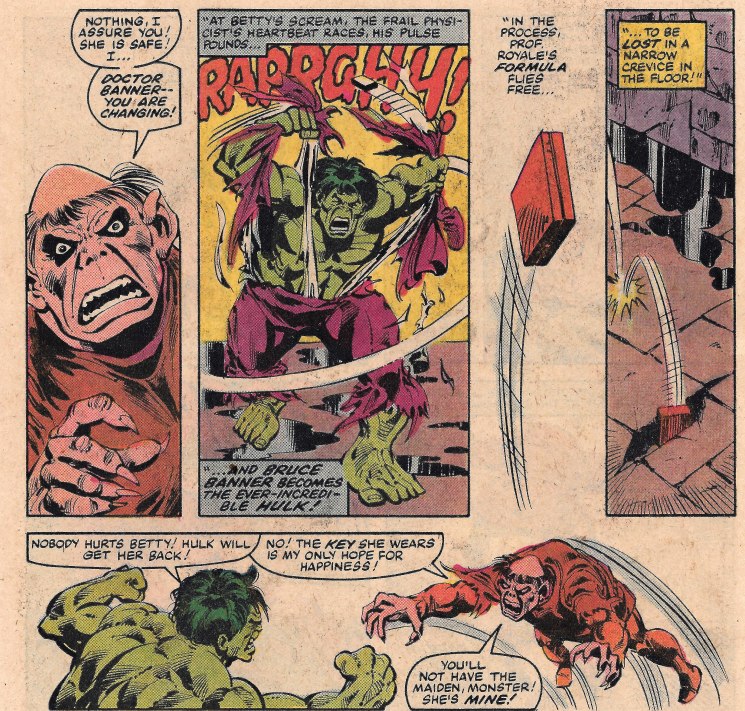 We do get some great Sal Buscema pencils doing their magic, which is always a bunch of fun. Our second MacGuffin, the vial full of monster cure, breaks loose and falls into a convenient hole in the floor, which acts like a ringside bell for these two. 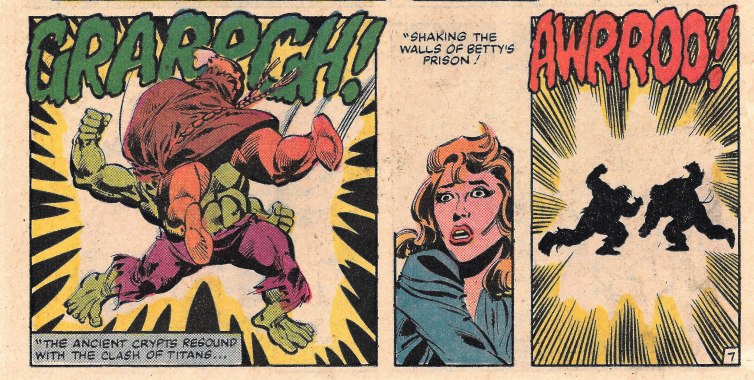 I'll admit that I enjoyed this part of the book. I never believed I would have cared about the Hulk going toe-to-toe with a literary figure before, but this won me over. Maybe next time Frankenstein's Monster or perhaps Mr. Hyde? 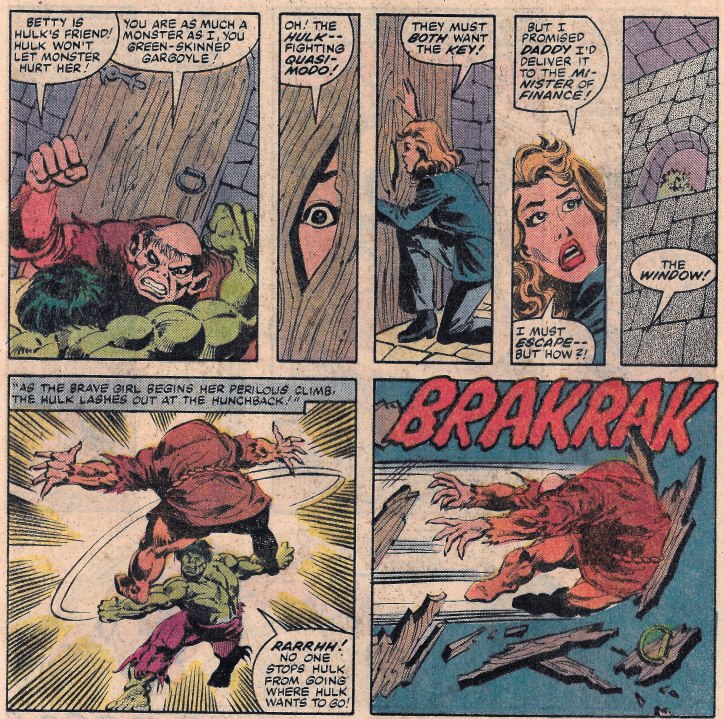 Betty will sneak out while the monsters duel, by the way. And what a duel it is. Buscema has lots of fun over the intervening five pages, throwing wheel shaped chandeliers… 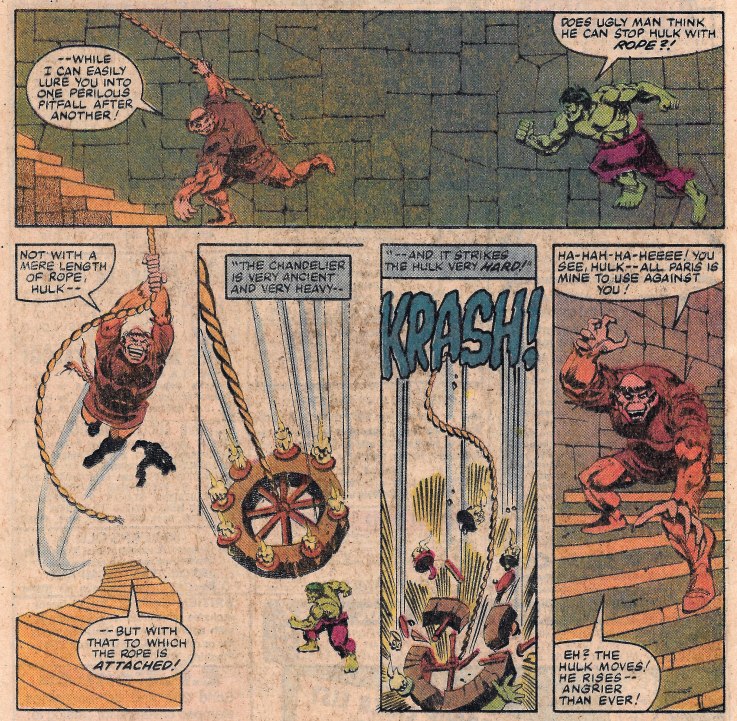 …and the famous Notre Dame bells around… 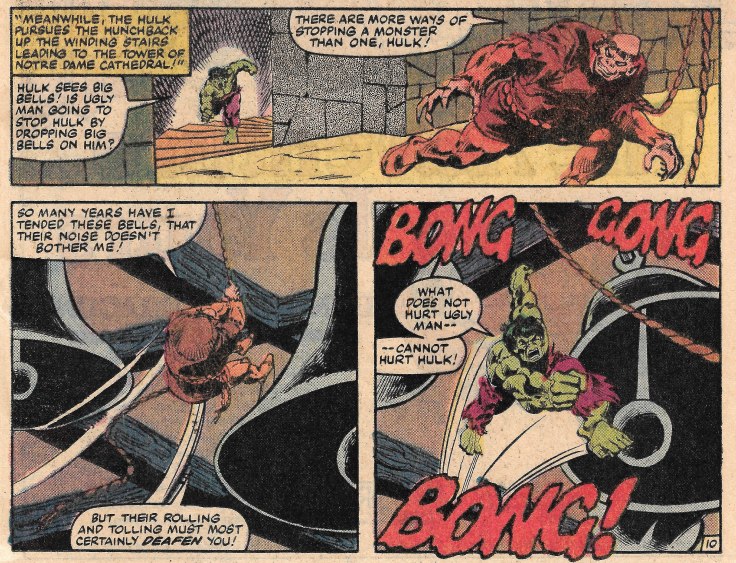 …before finally depositing the Hulk in the river Seine. 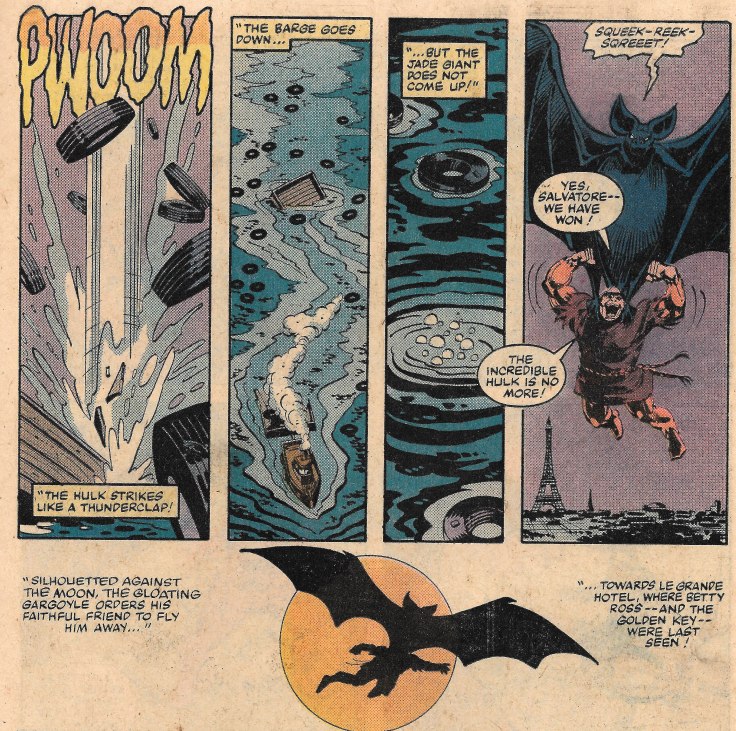 Quasi flies off courtesy of his pal Salvatore, who the hunch-man then dispatches to find where Betty has made off to with the key. Salvatore finds that happens to be this secret underground rail terminal. 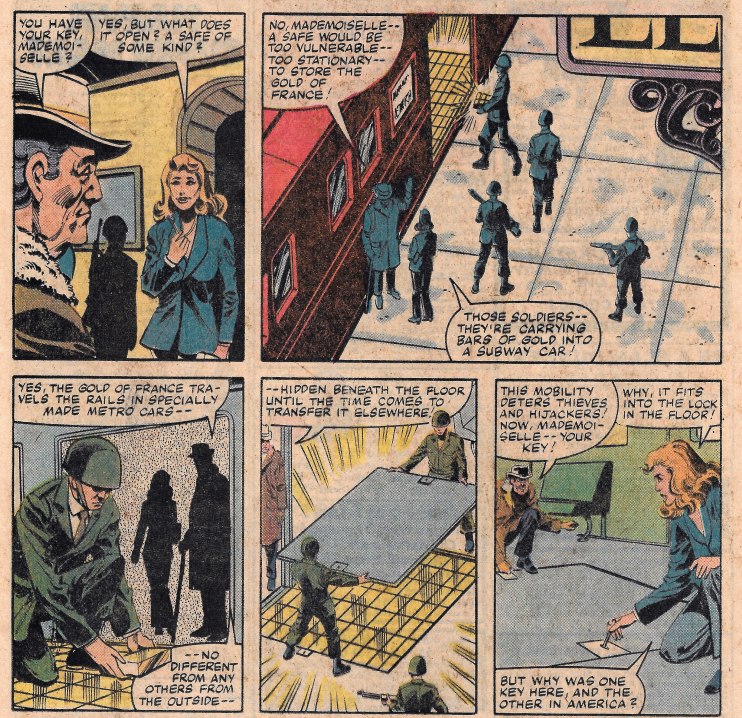 And while Betty and the minister take a gold-laden train ride straight out of a Bond film, Bruce Banner emerges from the Seine and goes off in search of the lost cure. He finds it at the same moment Quasimodo finds him, leading to this fateful decision. 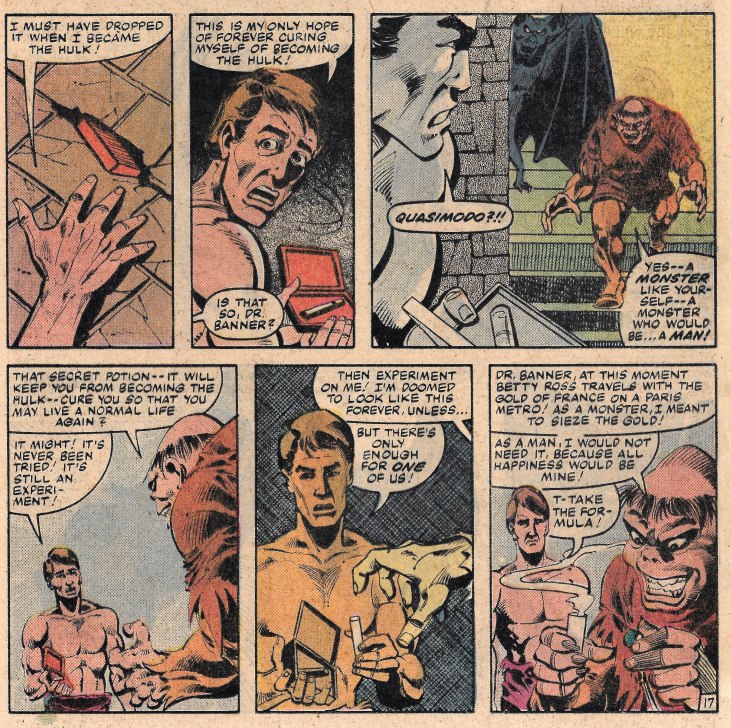 Um…Banner got his ugly pal via gamma radiation. Quasimodo's gruesomeness is genetic. How does anyone think the cure for one would work for the other? I mean, I don't. At least. Does our writer? 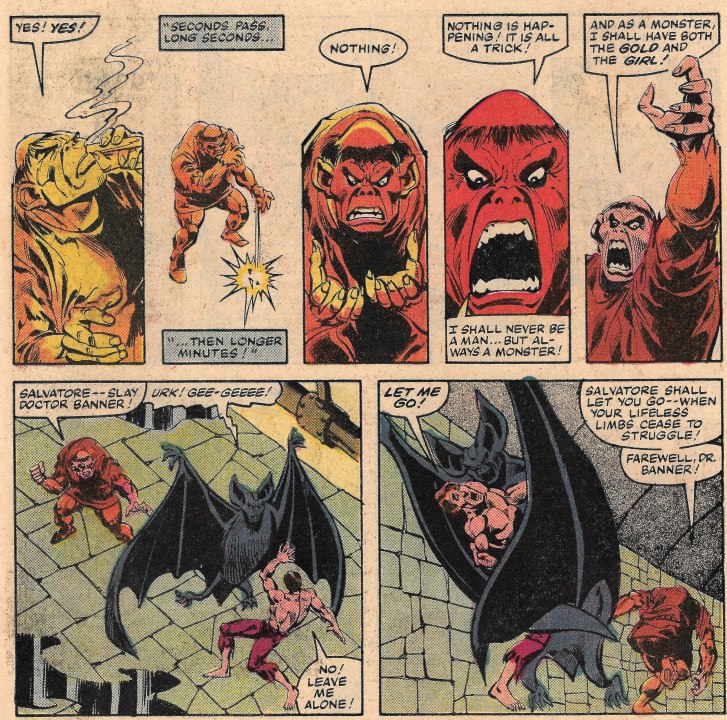 No. He doesn't and I'm glad of that in a story about a comic book character meeting a descendant of a literary figure who has all the physical characteristics of his ancestor and is even named the same, that SOME ONE drew the line at this working.

Banner is left getting the world's nastiest bat-hug, which isn't going to turn out well for the bat. I mean, we've seen what this guy can do to a shirt and pants when he changes…that bat is not going to fair well either. 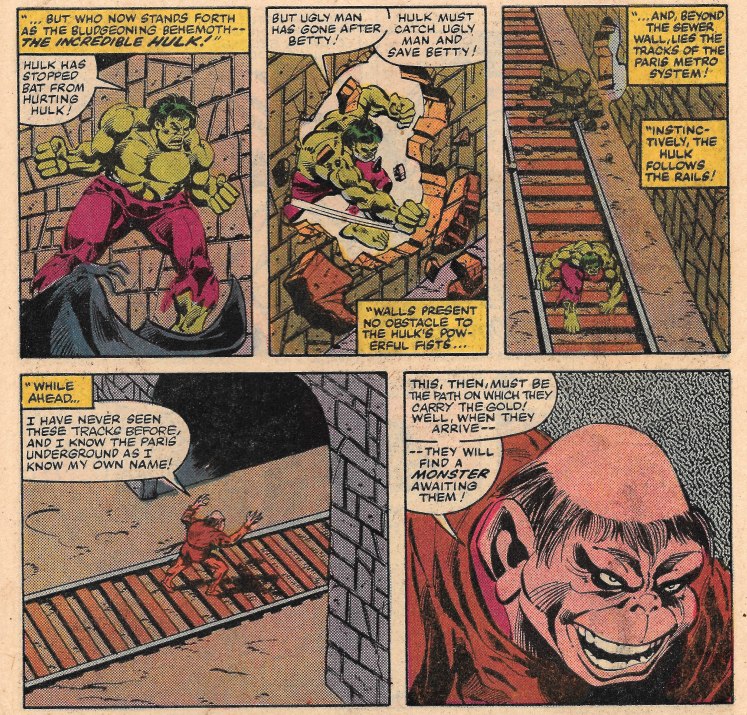 By the time that occurs, Hulk has to try and track Quasimodo down by using actual train tracks. Quasimodo is looking for the gold train, having been warned by his bat.

Once Quasi finds the train he jumps on and as the train passes the Hulk, Hulk does the same. And then Hulk knocks the hunchback off. However this means the train has no one steering it. 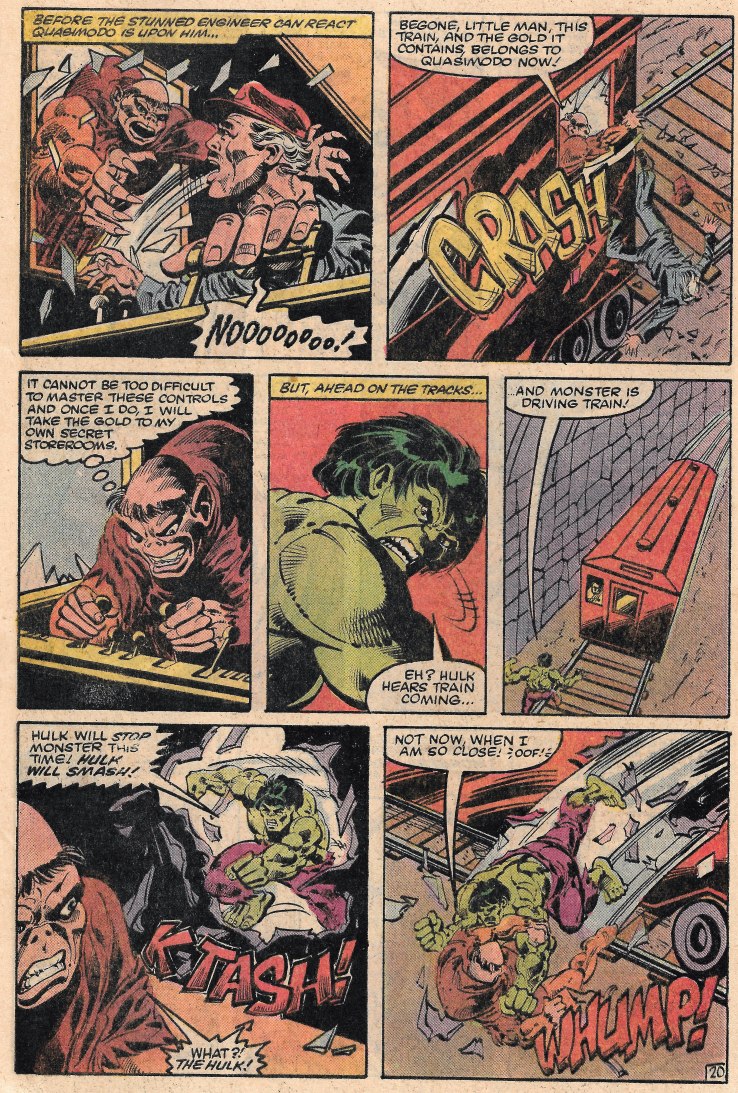 Speaking of no one driving, it's about this point that whomever is writing this loses his damn mind and decides the cure DOES work on both Hulks and Hunchbacks alike. 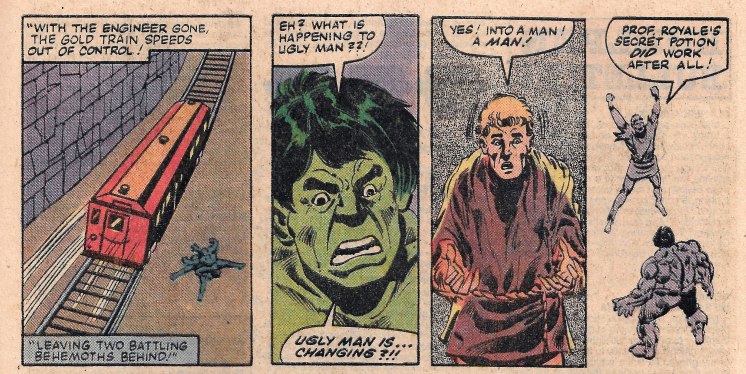 In the midst of all that insanity, the Hulk still has "a train to catch" so off he goes to put the brakes on it. 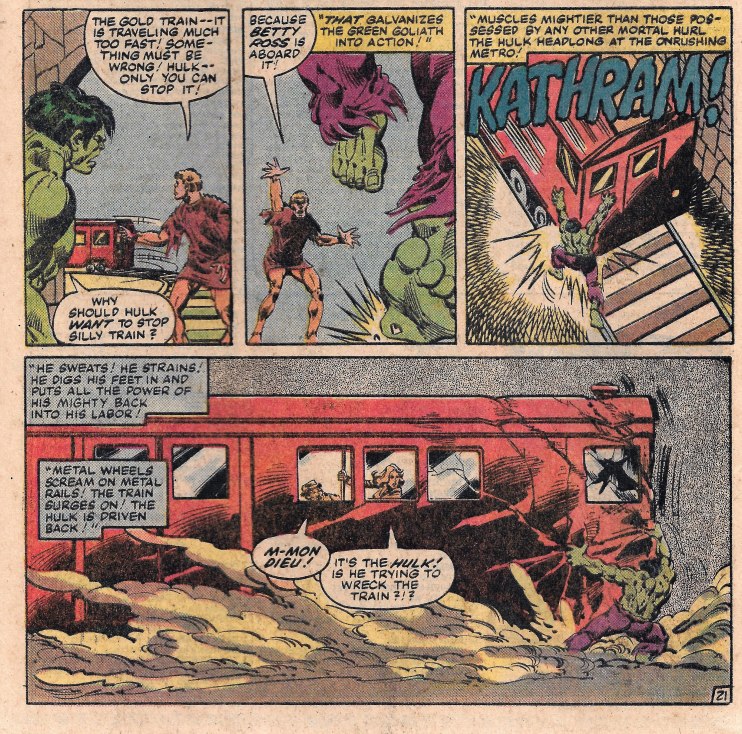 After Hulk saves Betty, the former hunchback of Notre Dame leads him off so she doesn't see him change back and they become BFFs or something similarly silly. 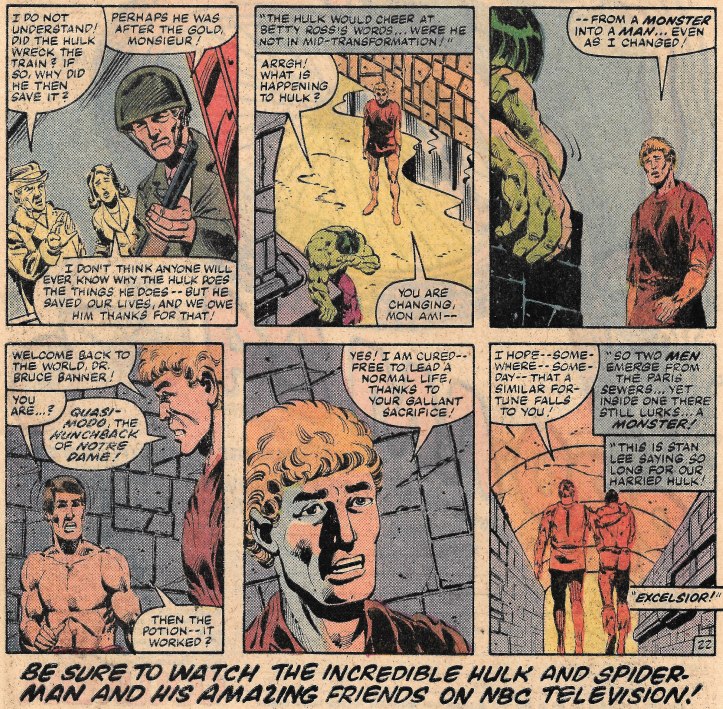 This was an odd issue, every time I tried to check my brain at the door, something would come along and carry it right back to me. I can tell now that it was based off the TV show and deals with a world full of much simpler logic and reasoning. Or lack thereof. In that spirit, I give it an E for "entertaining"…but only because E as an actual letter ranking is below D and right before F.

Epilogue: Here is the ending page that attempts to explain the differences between 1982's comic Hulk and 1982's TV Hulk. Thought everyone would enjoy this, unlike the comic. 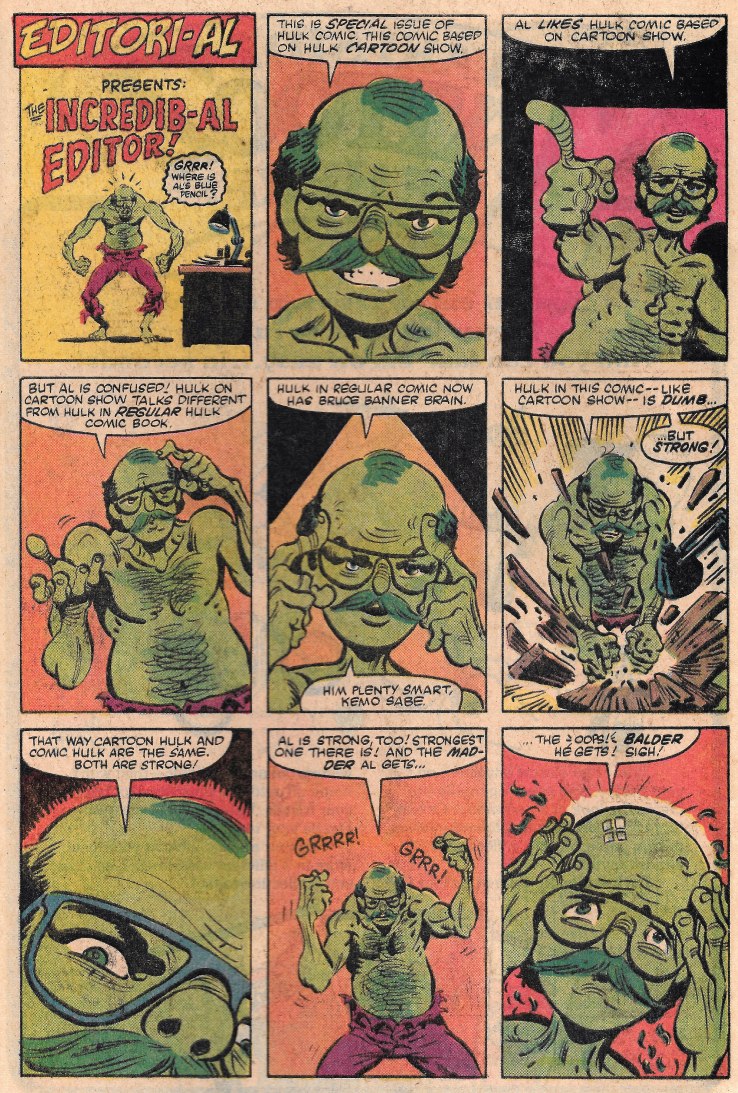 Posted by SonOfCthulhu at 2:41 AM