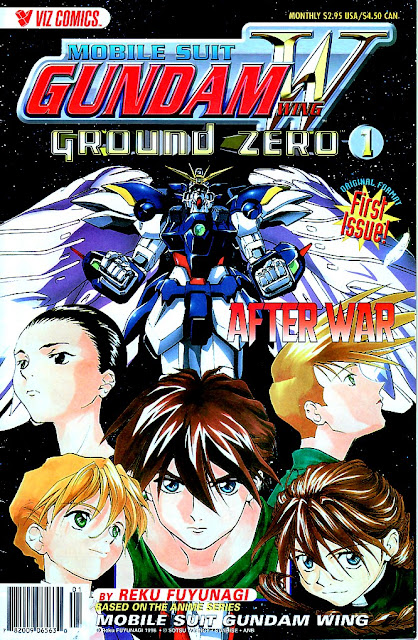 Place this book at Ground Zero and send in the strike

Gundam is the name Yoshiyuki Tomino and a group of creators at Sunrise came up with back in 1979 to describe their particular series of giant robot stories. The history of that term is quite convoluted, much like the Gundam series themselves. Gundam began as Gunboy (which is a term that I don’t think would fly in Post-Columbine US), became merged with the end of the word freedom for a bit (Gundom) and then finally settled in as Gun + Dam, which the wiki describes as “a gun that is strong enough to hold back enemies like a dam.” Not that I’d be able to tell that after reading MSGW:GZ #1, but more on that in a bit.

This history of the Gundam universe appears just as convoluted to me as the background of the name. Having series and movies spanning the years back from 1979 to the present day, learning Gundam history would be a daunting enough task for most people to assimilate. However Gundam has made it even trickier. Seems that some series are alternate realities of what could have happened after the previous series. Add into that the calendar years in the stories are sometimes called After Colony, sometimes Universal Century and other times Future Century, and that’s enough to make your head swim. From what I can tell Mobile Suit Gundam Wing: Ground Zero takes place after the regular anime series Mobile Suit Gundam Wing ends but before the Gundam movie “Endless Waltz”. Not that this information makes anything clearer.

If you don’t know anything about Gundam, and want to see what is making my head spin so badly go HERE for Gundam Wing info. 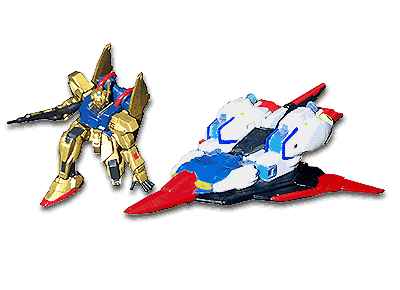 Since the Gundam series first started airing, parent company Bandai has made a killing off related model kits and articulated Gundam toy robots. After seeing the prices on most of the “toys”, I was tempted to label them “collectibles” ($50 for a Gundam toy robot? Holy crapbox!) and ditch the idea of including this book here. The fact that they sell model kits as well won me over, however. Plastic model kits are a staple of teenage boyhood. Parents of newborn baby boys should be handed a guidebook that absolutely requires them to have their child fire off a toy rocket before they are age 11 and to have them build at least one plastic model by age 15. There is just something so right about getting those plastic sheets of pre-made parts trimmed and ready for assembly that brings on a euphoric sense of accomplishment. And it brings that feeling way before you open the paint thinner and plastic cement that will create other euphoric states. 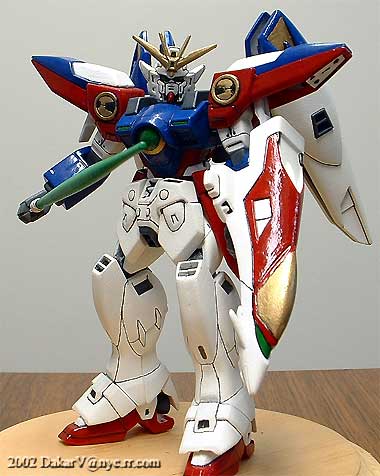 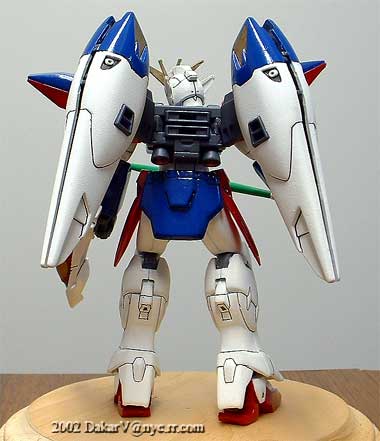 If you suddenly feel the need to go buy a model kit, try some of the techniques found HERE for best results. Also check out his really cool detailed Gundams. 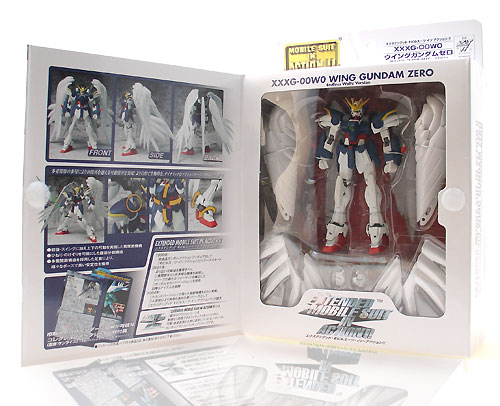 From what I did glean from wiki (since I don’t have time to track down what looks like no less than 8 and possibly 9 series and the associated movies), most of the Gundam series involve war between political factions. Usually it’s a tight-fisted Earth government lording it all over space colonies. Sometimes it’s the other way around. No matter who the evil bad guy is, the method of dealing with them appears to always involve giant robots. Now that is a concept that I can totally get down with. Too bad no one reminded writer/artist Reku Fuyunagi about it.

MSGW:GZ was released as a series of four comics in Japan in 1998 and then translated into English by Viz comics in 2000. The series takes place After War, a term that means to fans of Gundam Wing that events in the book happen in the peaceful time after the five Gundam pilots have defeated the evil OZ forces. Why do they need giant robots to fight lollypop guild midgets? Don’t ask me, but I’m pretty certain that would make for some awesome anime. They’ve also pressed a new peace accord in place between the Earth Union and the space colonies. Again, I’m not too sure of any of this because there are almost 50 Gundam Wing episodes that I haven’t watched that spell out the details. 49 of them to be exact. Lucky for me the first four pages recap the central characters. Here’s the page on Heero Yuy: 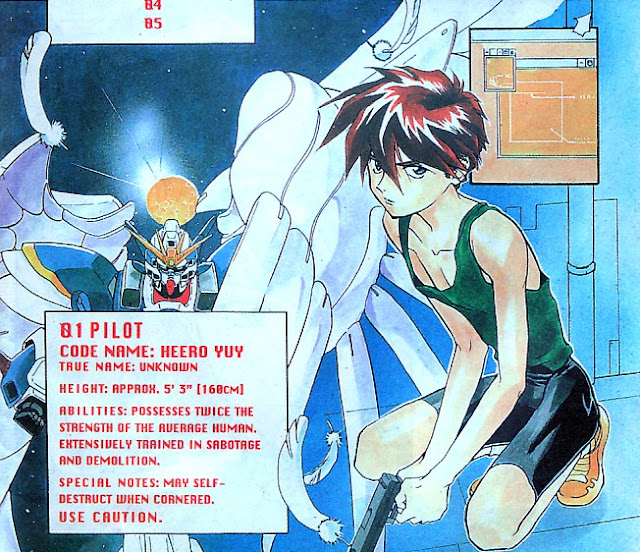 Yup, I’m in trouble. This tells me nothing about the plot of the anime series. Plus what is all that stuff about him self-destructing? I’d think it was some kind of typo or bad translation except… 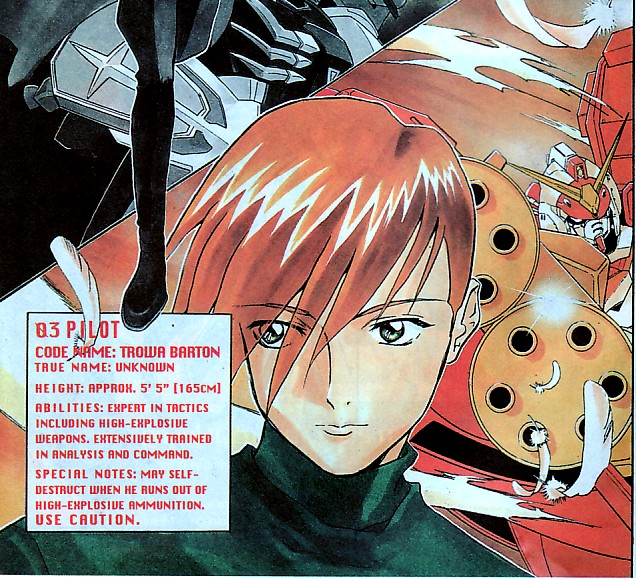 …they mention it again when describing another Gundam pilot. I sincerely hope they are talking about how they handle battle situations. I’d hate for this guy to run out of high-explosive ammunition while eating baby-backs at Chili’s one day and his head suddenly explodes like that guy in “Scanners”.

So I move on to the story in hopes that I can pickup stuff as it goes along. The book does a fairly good job with that. Unfortunately, I’m about to make an unpleasant discovery about this Gundam book. There’s no Gundams in it. 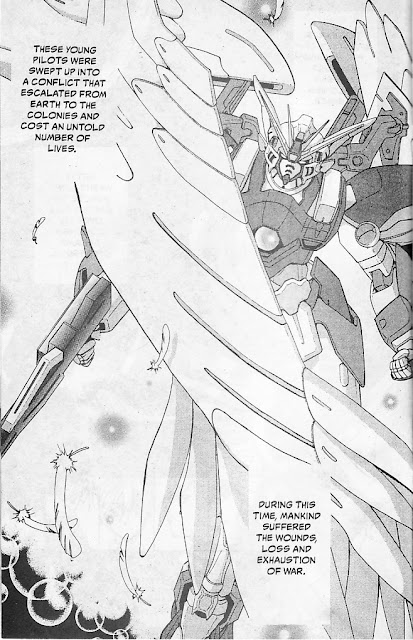 Ok, well there is that one. But that’s more like a one page flashback to the series and we don’t see it do anything except look cool. No missiles or chain guns or laser swords or wing shields or anything. What we do get is page after page of emo nonsense and a basketball game where nothing much happens.

Here is the beginning of the pivotal action scene of the book: 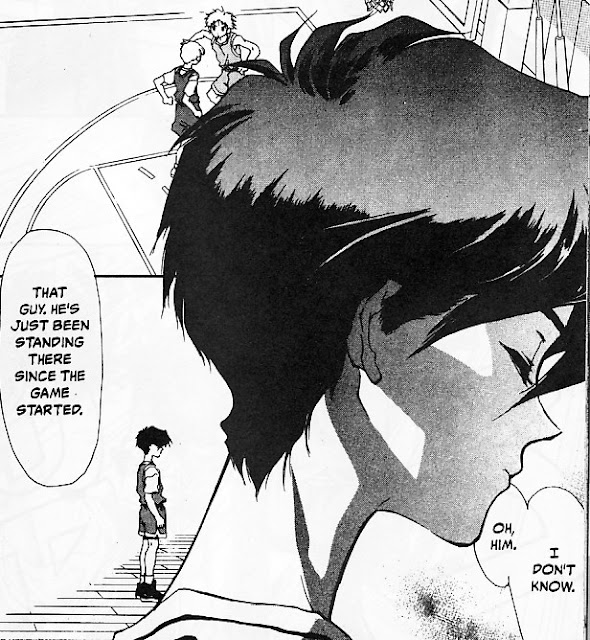 That’s Heero Yuy, our main character. In the course of the next five pages he will spring into action, run across the basketball court, grab the ball away from someone who is probably not guarding against insane guys who run on the court for no reason, and shoot a three point lay-up.

At least we didn’t waste five pages of material for him to put up a brick. Everyone is stunned. I dare Heero to try this same move in Compton, however. Still, in Japan they are very into Heero worship. (Ha, no that’s not funny. But it stops me from thinking about this book, which is good.) So now everyone is asking who this strangely fast, mute basketball god is they see before them. The answer is of course: 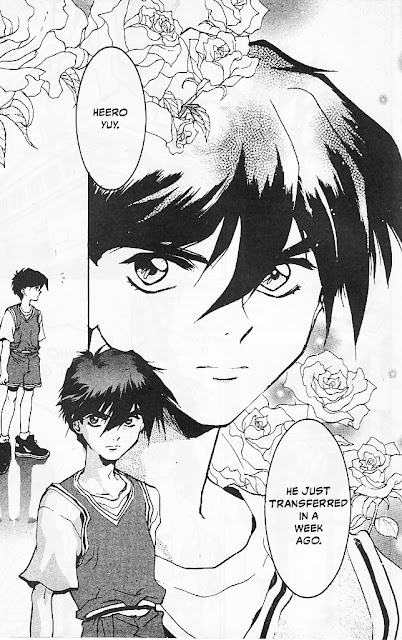 What is this? Tiger Beat magazine? They are using scrapbooking techniques by surrounding the center picture’s corners with flowers to soften the page. (And don’t ask me about how I know this. Sometimes a husband has to go do things with his wife he’d rather not talk about.) Why does this warrant a whole page? Where are the giant robot fights?

We move on to Heero sitting outside on a bench with his laptop computer open. All of the guys from the gym are hanging around him being all nice-nice because they want him on their team. Heero keeps ignoring them until one of them touches his arm to get his attention. Heero gives him a glare that causes all of the dudes to run off in a panic, saying things like “He’s scary!”. To which Heero’s astounded reaction is… 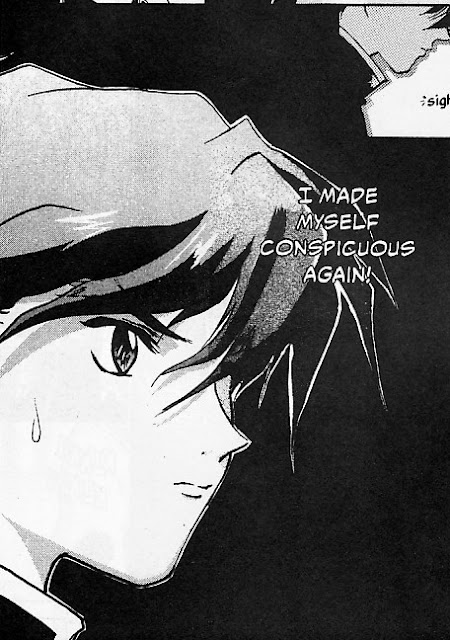 No duh! Acting like a complete anti-social space case one minute and then jumping into a team sport you weren’t invited to play just to show off isn’t trying to be “inconspicuous”. It is boarderline psycho stunts like that that will make other people think you are autistic, crazy or worse.

Then we have three pages of Heero talking with (I can only assume) love interest Relena Peacecraft. He’s all emo about the war being over and how now he has no place in this world. She seems kind but distant, giving him advice that, while it’s really exactly what he needs to hear, does absolutely NOTHING TO GET US CLOSER TO A GIANT ROBOT BATTLE. 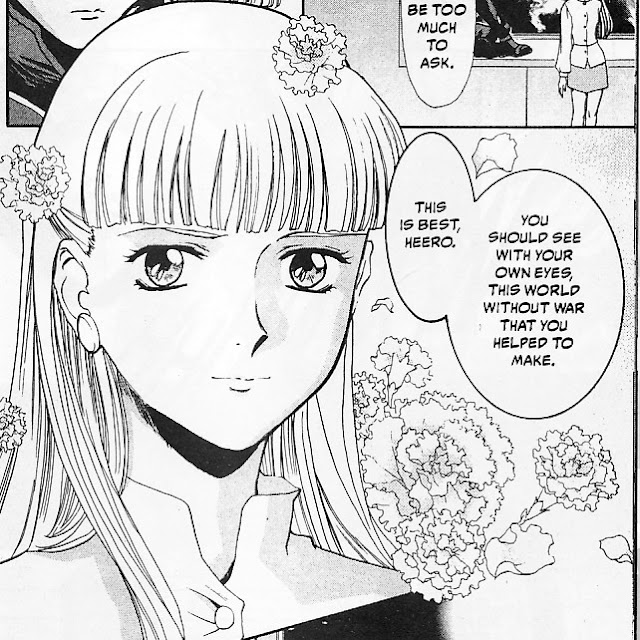 Suddenly! On the next page! It happens!

He remembers what a Gundam looks like! That’s good too, because after this many pages of not seeing one, I had totally forgotten. Then he goes back to feeling sorry for himself. Then he gets an email on his laptop claiming his Gundam has been removed for storage and if he wants it, he’ll have to meet with the robbers. The message is sent from someone calling themselves “O”. I’m wondering if this is the production company from “The Big O” anime repossessing his robot because he wasn’t using it.

Heero checks out where his Gundam was stored and finds it empty.

That’s where a cool battle mech would have been stored, if the writer of this book knew what his audience wanted. Heero decides that there’s only one way to find his lost robot (and with it, the only chance this book has of winning me over to the Gundam franchise).

That’s the end of the issue. A few pages of fan art follow, none of them have Gundams in them either. I guess the fans forgot this was a series about giant robots too. I have to say that there needs to be some kind of truth in advertising disclaimer on the front of this book. Something to the effect of “This book does NOT contain any giant robots.”
Posted by SonOfCthulhu at 3:12 AM