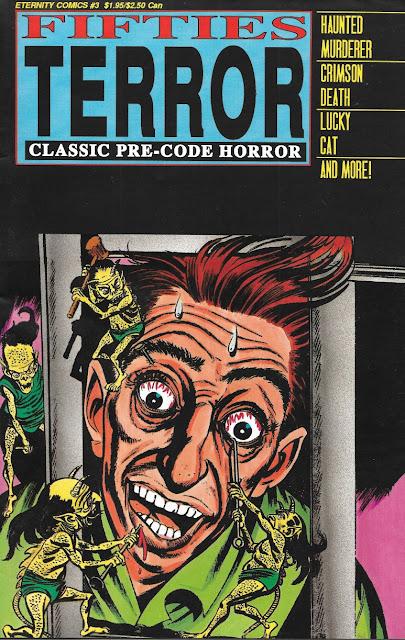 So much fun, it became illegal

Of course that's not strictly true.

In 1954, concerned parents stormed Congress in a fury. The reason for appealing to our highest lawmaking body in the land?: comic books and an inflammatory book by Fredric Wertham called "Seduction of the Innocent."

Seems that some of the crime and horror comics of the time had set off the more conservative sect in our society who were worried about depictions of violence, gore and sexual innuendo. Basically, all the things that make comic books great. Book burnings of comics occurred in Oklahoma City and Houston. Knowing the worth of some of those books, I bet those people feel pretty stupid right now. Or dead. Either way is fine with me as I respect books more than I respect most people.

Congress found an industry that was easy to bully into submission and before the government could step in, the comics industry in toto created the CMAA: the Comics Magazine Association of America. Each comic would have a number of issues submitted for approval and would receive a seal to place on that title showing it met the Comics Code Authority for not being too much fun for any child. 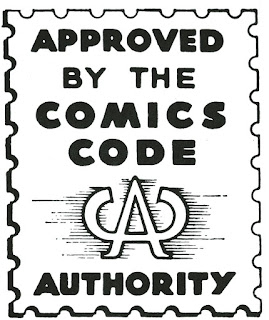 These were dark years, censorship-wise, and it really makes you wonder what the CCA might have held back. Which artists or writers might have tackled more challenging, thought provoking topics had they not been shackled by the CCA. It is enough to make you weep, since comics are, at their very core, a form of Art.

And Art should never be censored.

Why, that is the very foundation of the First Amendment to the United States Constitution: freedom of speech. But business is business and our more extreme elements of society don't understand the damage they do when they stifle the voice of even one artist.

The code existed until the early 2000's. It bankrupted many publishers who would not bow to its draconian censorship. The most famous was EC Comics and William Gaines, the creator of Mad Magazine. But as time wore on, the CMAA power dwindled and it had to be revised again and again. By 2001, Marvel abandoned it completely. In 2010 only three publishers still adhered to it: DC, Archie and Bongo.

This volume of public domain reprints comes courtesy of Eternity Comics and they are so cheap that the pages feel like old newsprint and they are rendered completely in black and white. The four stories were originally printed in Tomb of Terror, Eerie and Chamber of Chills. How do stories this old feel to us modern day post-code connoisseurs? Let's take a look: 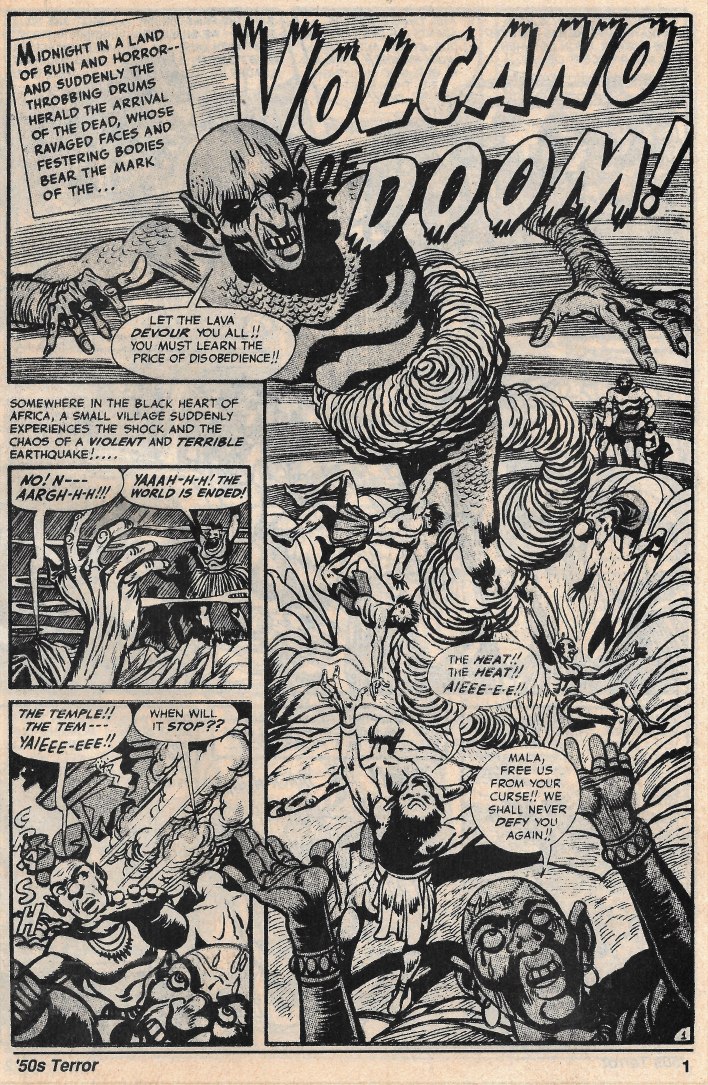 Our first of four is called "The Volcano of Doom" and from splash page on, I was hooked by the dimensions the art created. I love old panel layouts and this story has a few doozeys. The story is about a village with volcano next to it that houses their God.

Unfortunately that volcano causes an earthquake and the next thing you know everyone is upset with Mala, the volcano God. Naturally they decide to take it out on the village shaman and village leader. 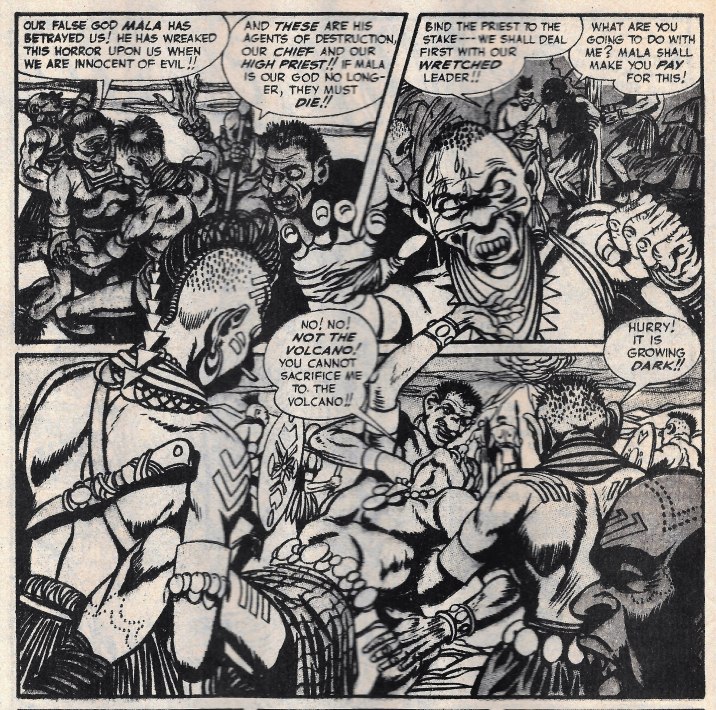 They bind up the priest and through the leader into the volcano, and I couldn't help but notice that they included a panel of him falling to his death. Neat!

The priest however they save for the next day, either being superstitious or worried about being around the volcano at night. That means he has a chance to slip his bindings and then plead for help from Mala. And boy does he get help.
Mala appears and then takes him to the sacred burial ground of the tribe where he raises all the dead and sends them back to wander the village streets. 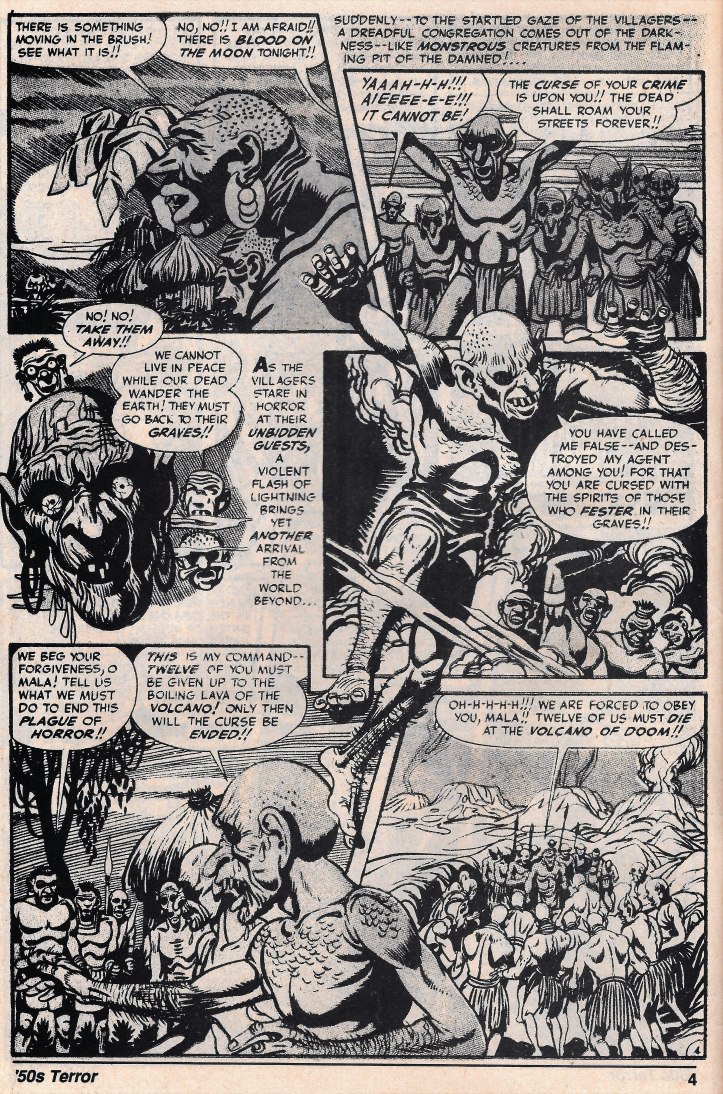 This greatly upsets the villagers to have their own relatives walking around rotting before their very eyes. They approach Mala and the priest to make amends. Mala demands twelve people jump in the volcano. So the conspirators make their way to the top to throw themselves in.

However, after that task is accomplished, Mala has a few additional conditions to add to the villager's punishment. 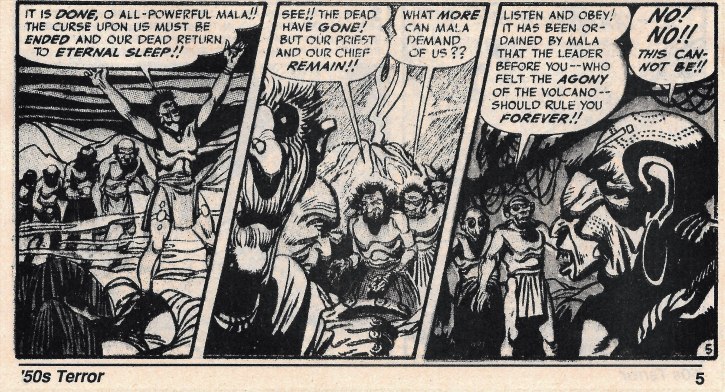 At hearing this, the people balk at Mala's wishes. He appears in a flash of lightening and declares they have defied him for the last time. 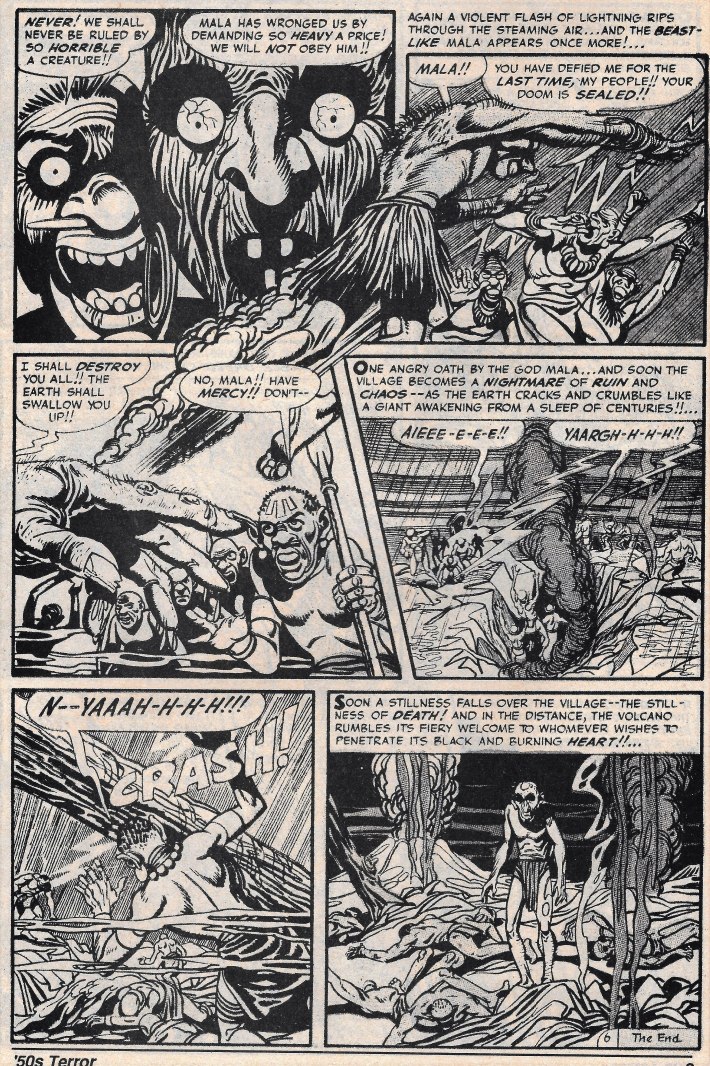 NICE! So the first story kicks things off with the right mix of horror and supernatural. Which is good as our next tale is not as visually appealing and a bit more boring. It's a tale of haunting that gets silly very quickly. 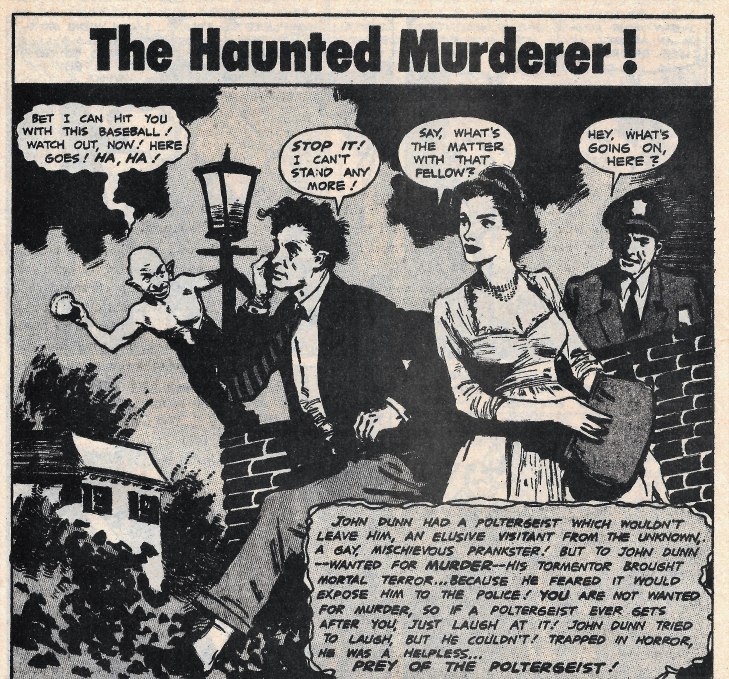 "The Haunted Murderer" starts out with a decent premise, that being a murderer was hounded by an invisible ghost only he could see and hear that would play pranks on him, threatening to expose him. However this quickly devolves into us just waiting for any resolution as it becomes almost situational comedy. 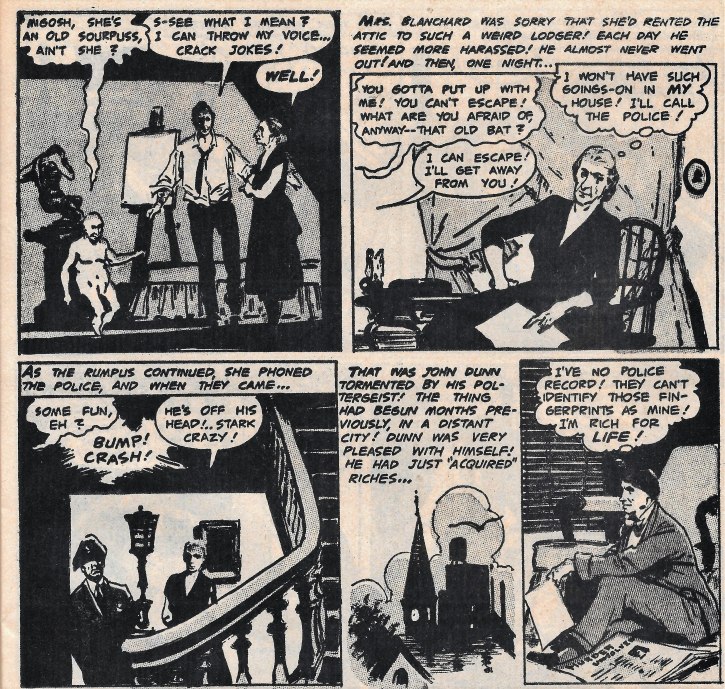 We begin with our murderer renting a room, then dealing with the poltergeist tearing it up and having to explain to the landlady why he's torn the place apart.

Finally it is too much for her and she calls the cops. As they ascend the stairs, the murderer accounts for how he became targeted by the ghost. 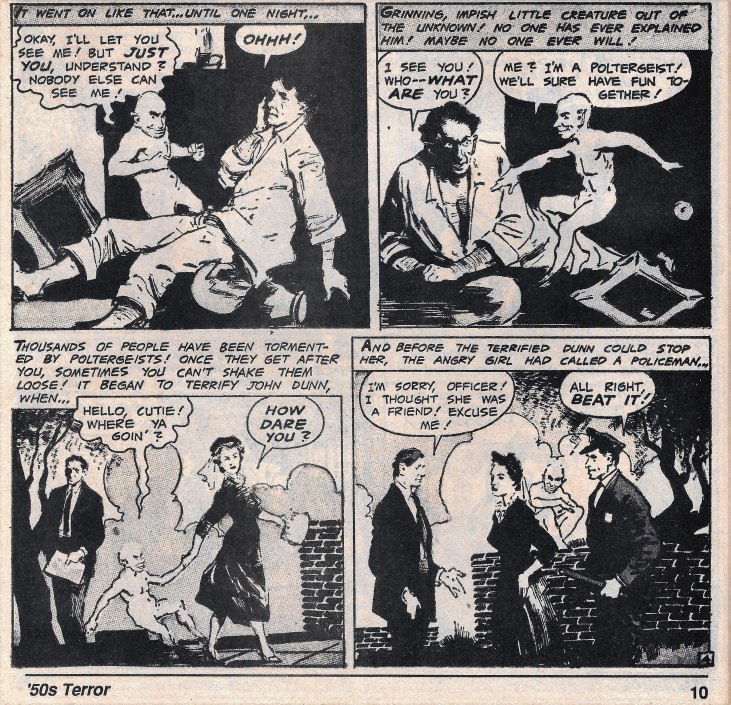 After a page or two of the poltergeist's antics get stale, we end the extended flashback to find John has a solution to getting rid of his haunting. 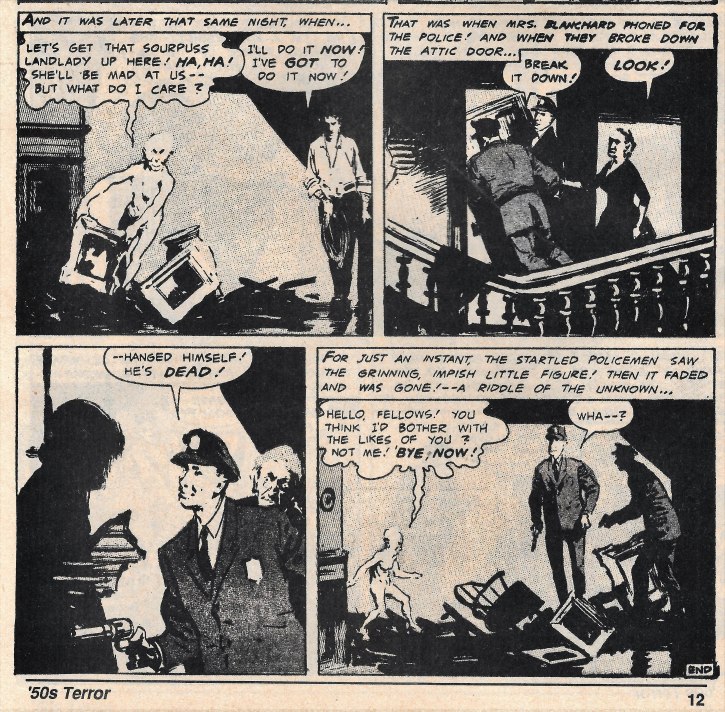 Okay, that works too. Guy kills himself he so overcome by the fear of being found out someday. I was bored by this and perhaps it was the more standardized panel layouts. I love it when artists feel free to use the whole page. This didn't take enough risks for me both story-wise and artistically. Luckily there are two more stories to go. 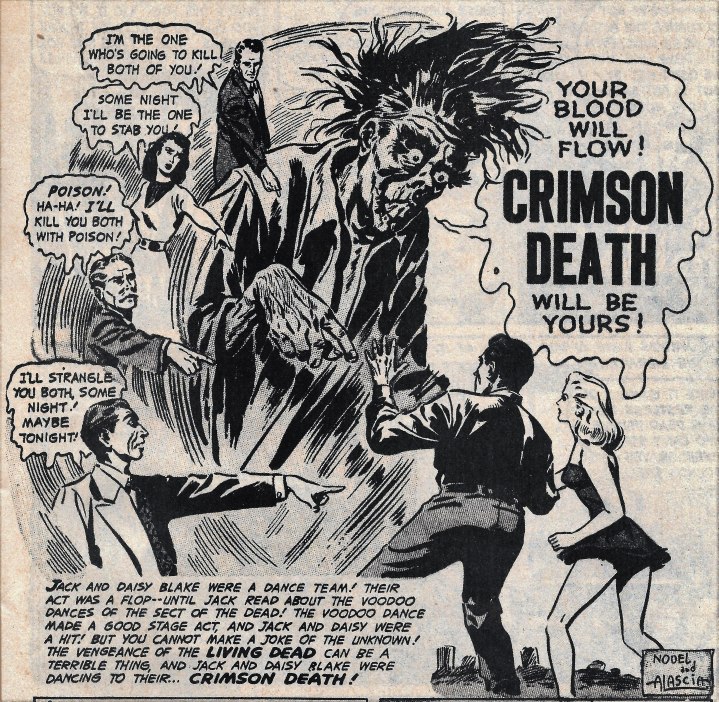 Moving on, we have "The Crimson Death" about two down on their luck performers who decide to use a voodoo dance to become famous. This front splash tells almost the entire story. Since the art isn't all that terrific, allow me to cha-cha past the part this splash spoils. After performing the voodoo dance, the couple has this happen. 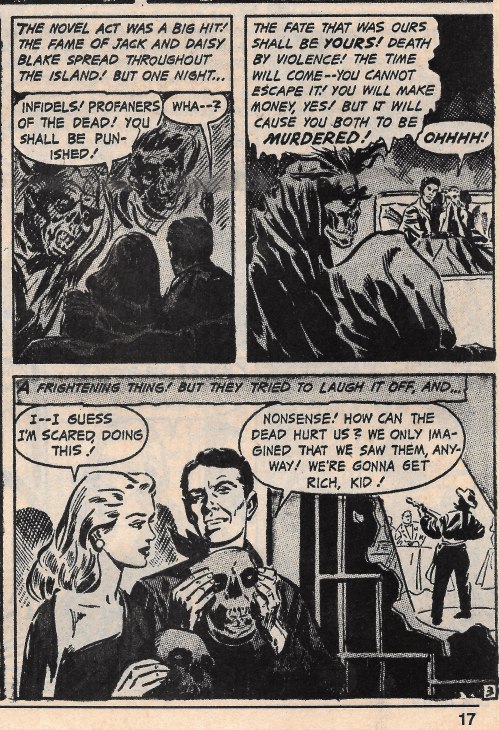 Yeah, we only imagined the exact same scary dead people images and voices. No way that has any connection with our dancing voodoo rituals and playing with powers beyond our mortal understanding. Shut up, Daisy! 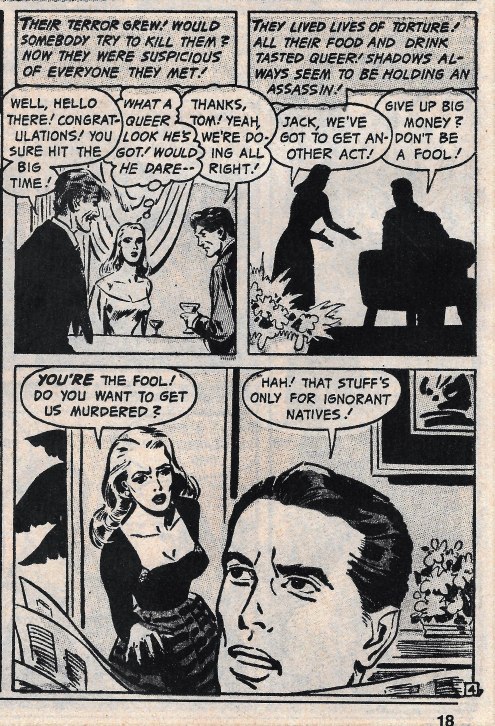 Jack finds another prettier, more willing dancer and starts to get deadly ideas… 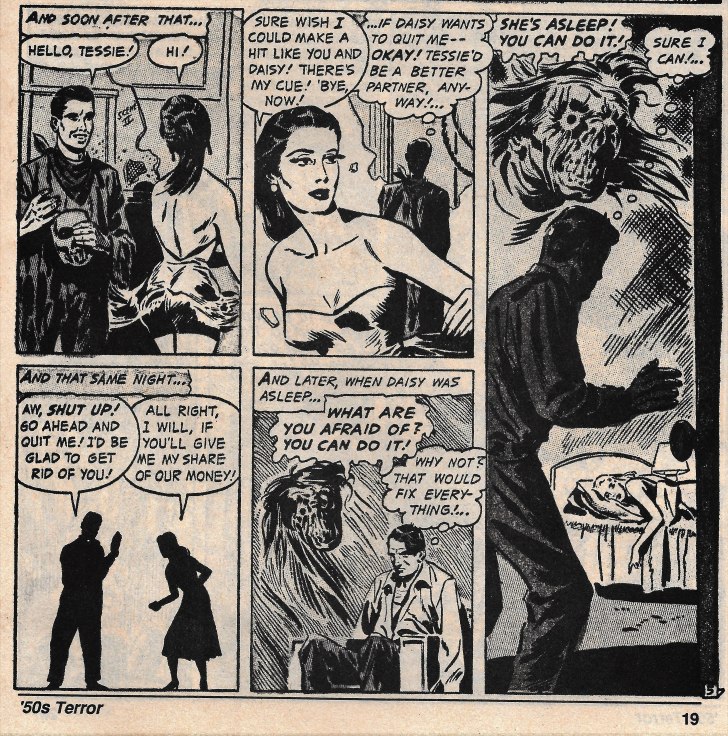 And they kill each other. 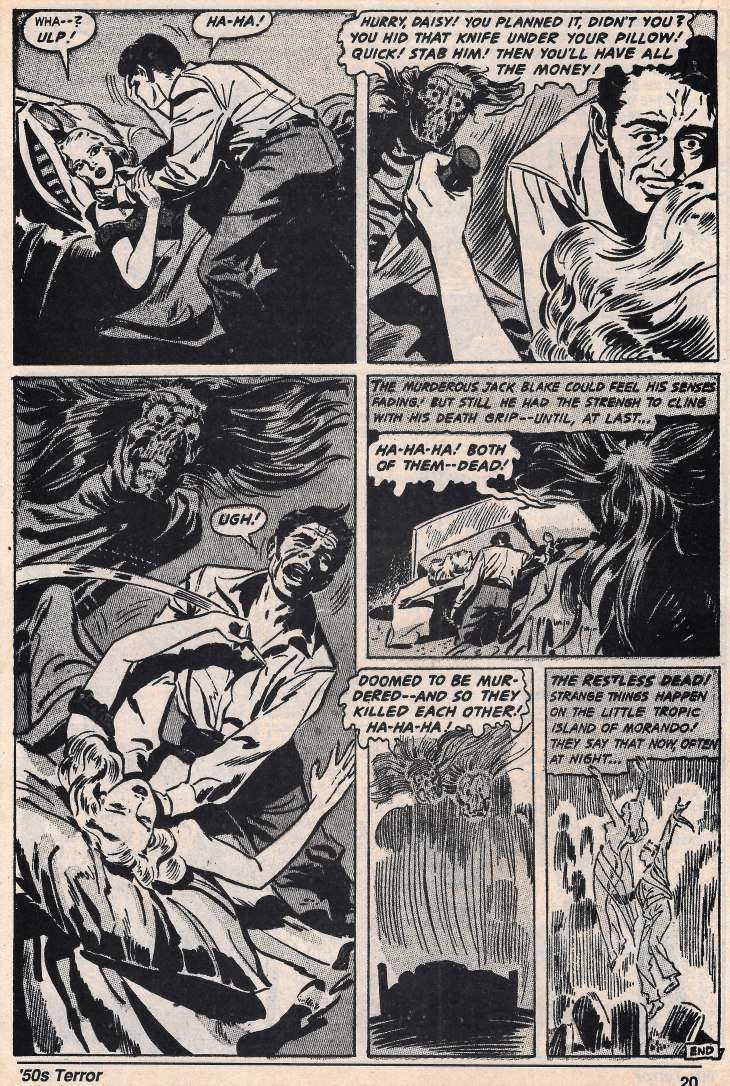 Moving on, our last tale is called "The Green Killer" and talk about ending on a strong note. We start with a stranger arriving at a campfire with a tale of terror. 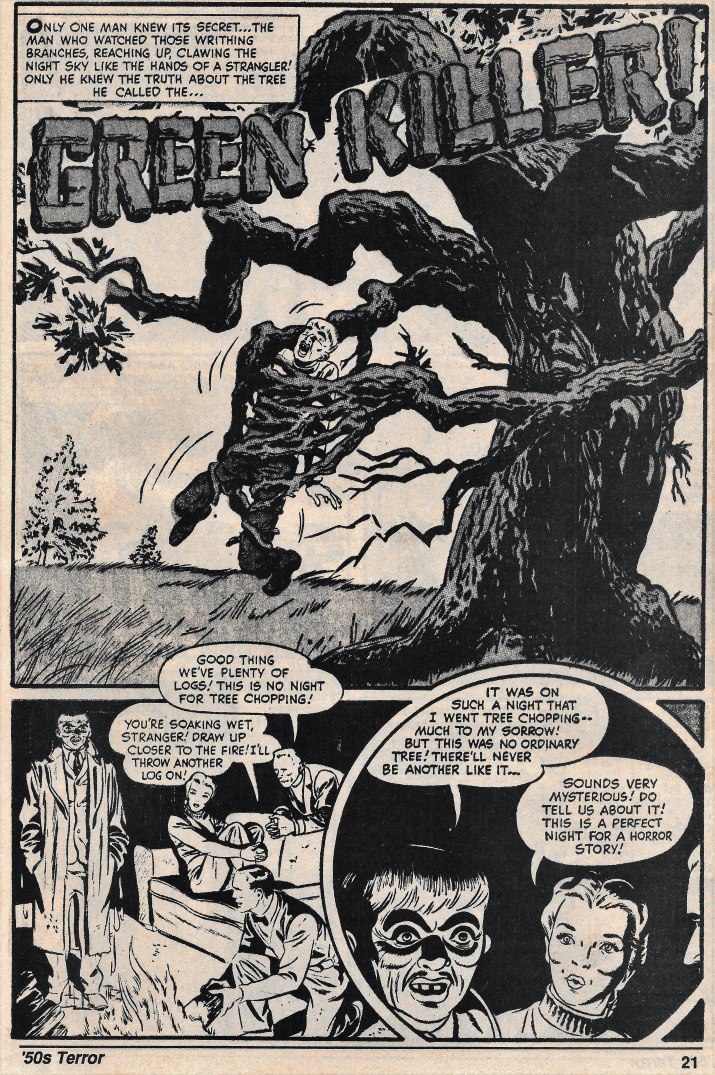 He begins recounting a tale of going for firewood and finding a very special tree. A tree of EVIL (lightning strike / thunderclap!) 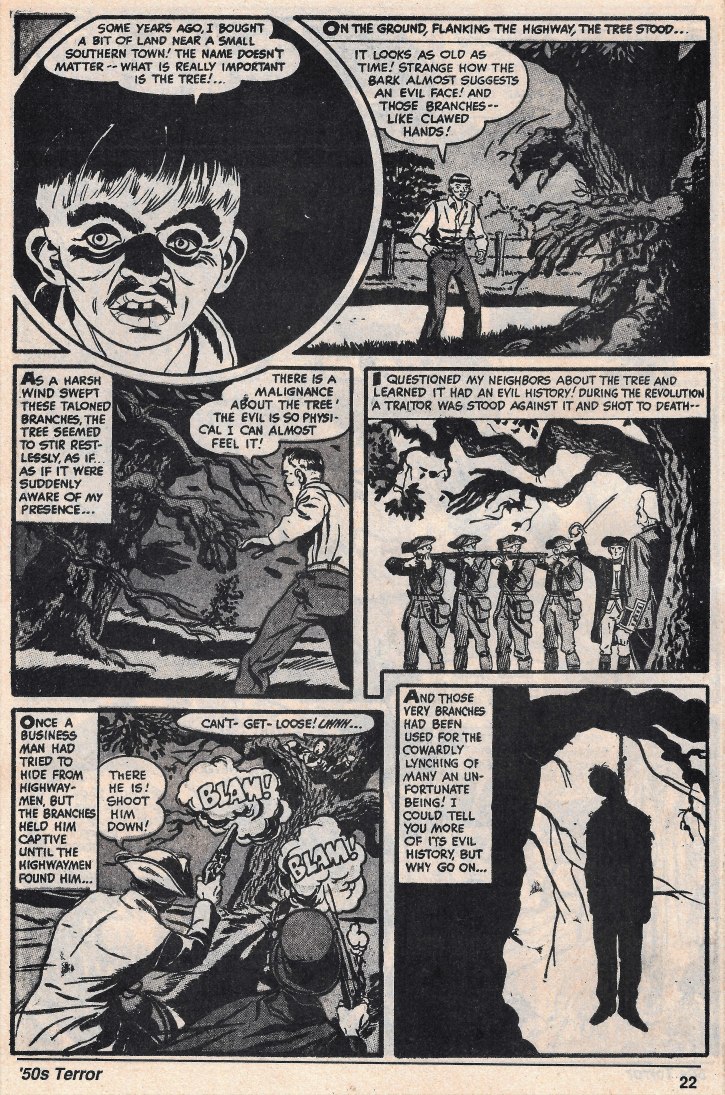 So all manner of bad things had been done around this tree, so much so that the plant itself bore humans malice. Love this so far, by the way!

The tree isn't just a passive observer of horrid events now, but is indeed an active participant. See this part here… 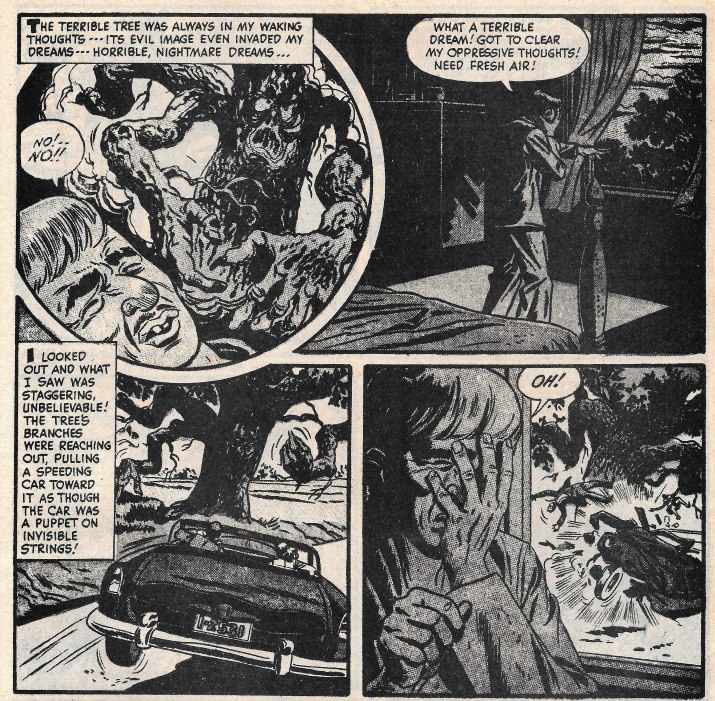 Yes, ladies and gentlemen: It's an evil tree with mind-control powers. Just great. The narrator goes to chop it down… 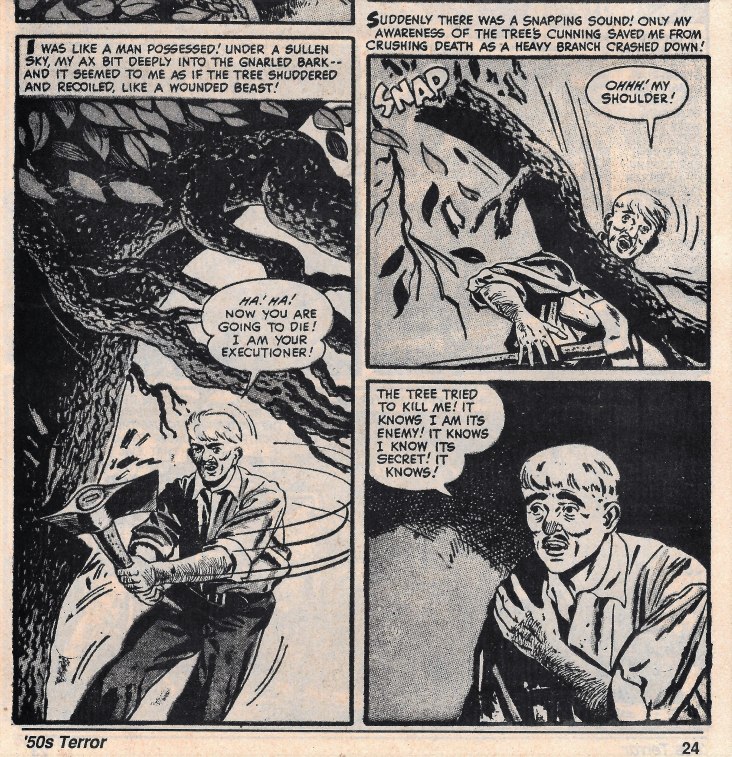 …and it attempts to crush him under a dead branch. He gives up. But a swollen riverbank causes him to flee his home by boat… 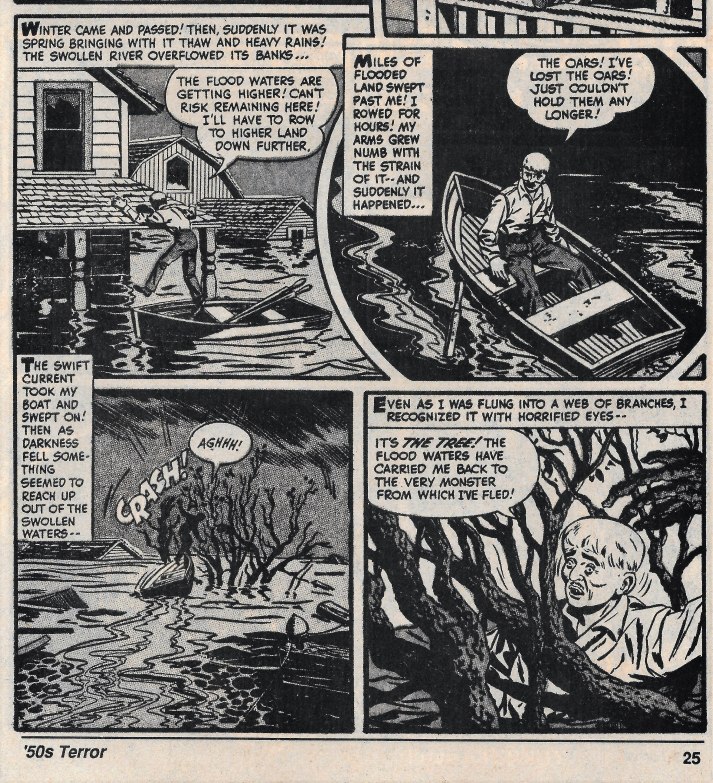 …and his wooden craft is drawn downstream to the tree, becoming entangled in its branches. Soon, he too is caught and strangled. How does he ever manage to get away? 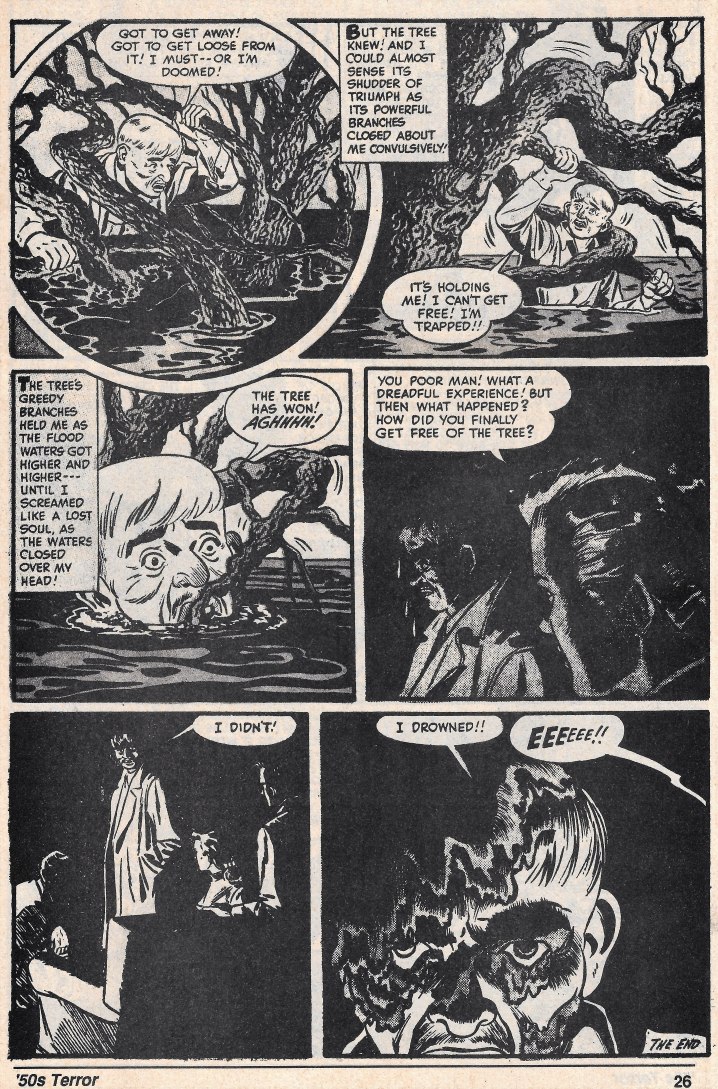 Thankfully most precode stories remain around in some form for us to examine, read and be entertained by. I often wonder though about the stories from those intervening code years and ponder what might have been.

Posted by SonOfCthulhu at 8:16 PM