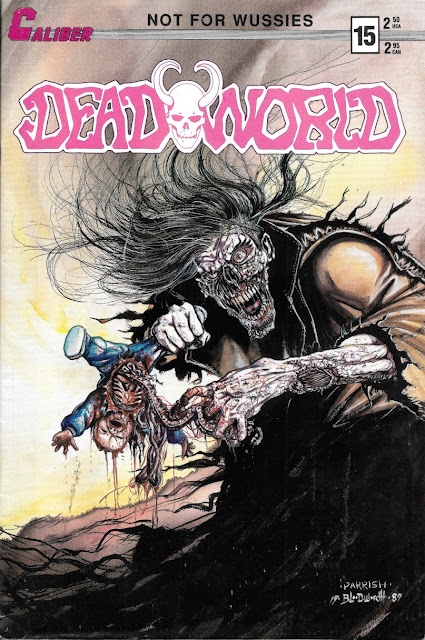 What if The Walking Dead had been made in 1987?

I need to add to that subhead up there "…and had been way harsher on its survivors?" I mean that tagline on the comic about it not being for wussies is the real deal. As if the zombie yanking the intestines out of a baby didn't scream "not for kids".

This issue hit the stands in 1990 and if you are doing the math in your head you'll realize this title must have had a rocky publication history. Created by Stuart Kerr and Ralph Griffith with illustration work by Vince Locke, the title was published by Arrow comics initially. Building a foundation on gore and horror, Deadworld grew to cult status very quickly.

Who could have guessed end of the world zombie comics would sell, right? Especially violently gory ones.

When Arrow ceased production of all titles, the rights of the book fell to Locke who transferred it over to Caliber Comics. Gary Reed took over as writer after the twelfth issue. It would go on to produce 26 issues, the final issue of that first run rolling off the presses in 1992. Not a very reliable title to do so little in five years.

If anything like the copy in my hot little fingers, what did come out in those early years was the harshest post-apocalyptic zombie take yet. We start this issue off noting that we've got Reed doing words, Parrish and Bloodwortt doing pencils, and Locke doing finishing inks. I believe that the two pencilers were necessary because of this opening sequence, a transition piece that begins with an idyllic suburban still life… 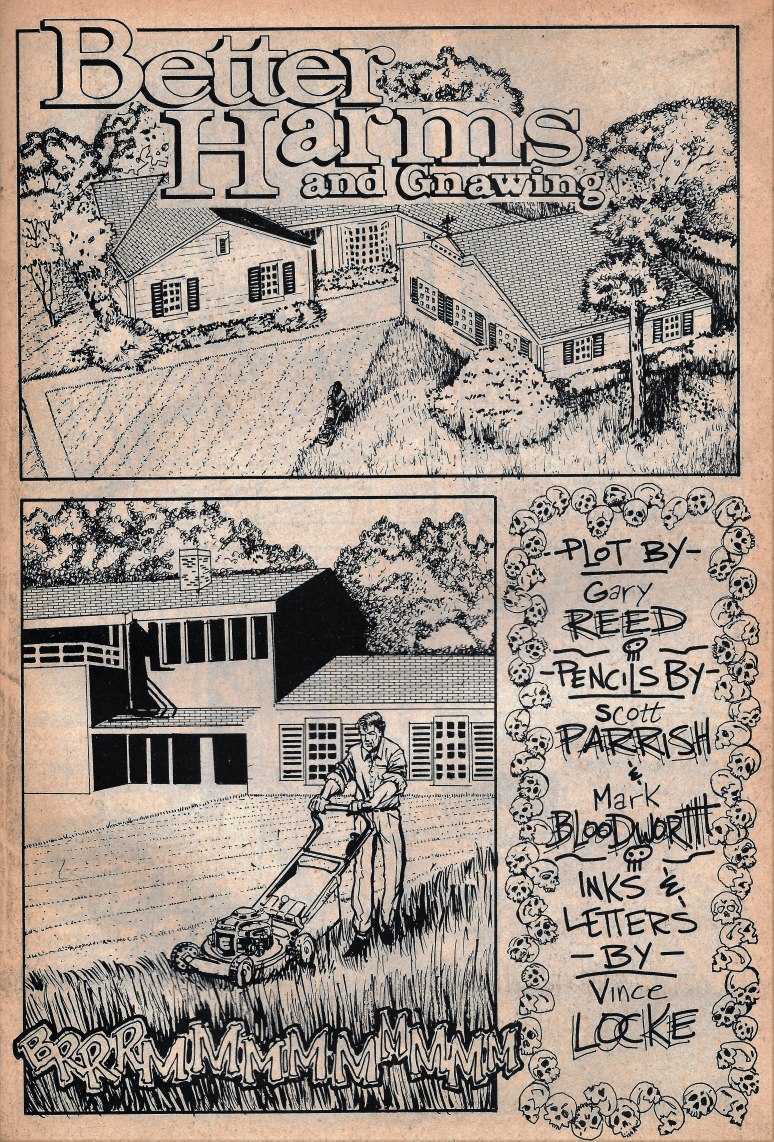 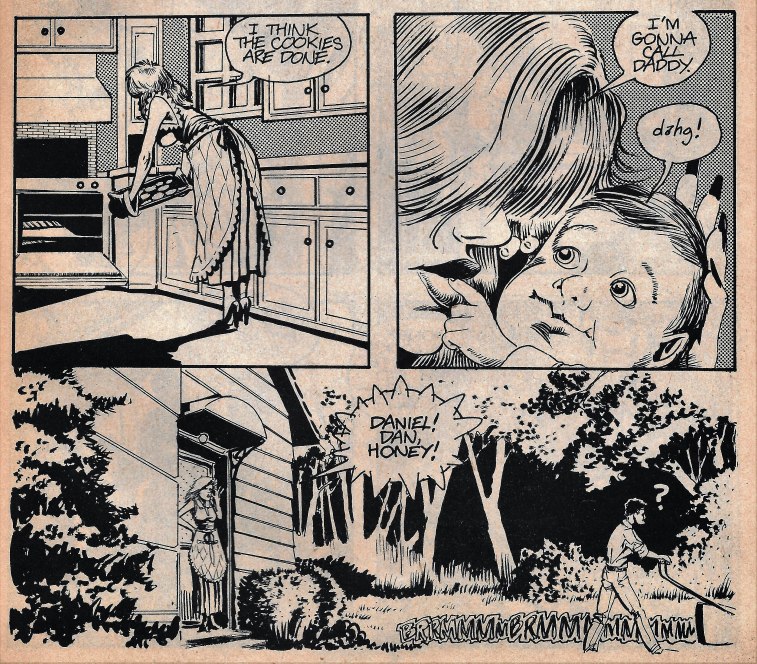 …that shows some dark corners… 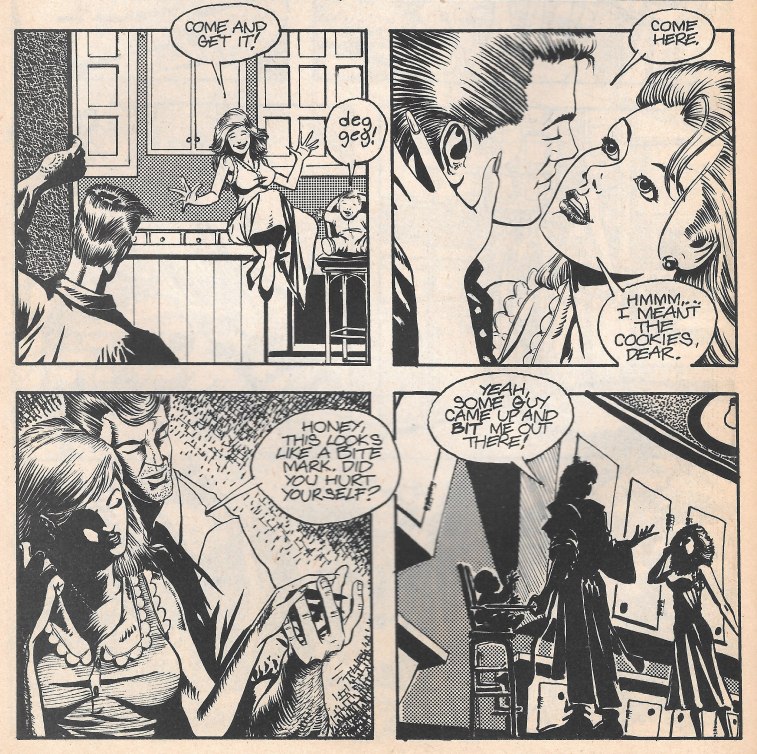 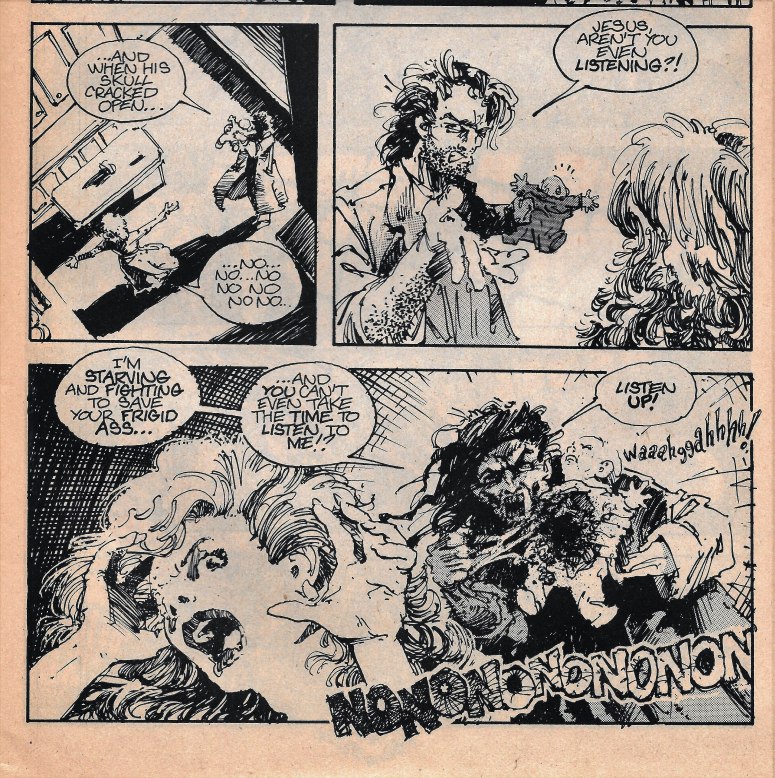 …that peel back into nightmarish proportions… 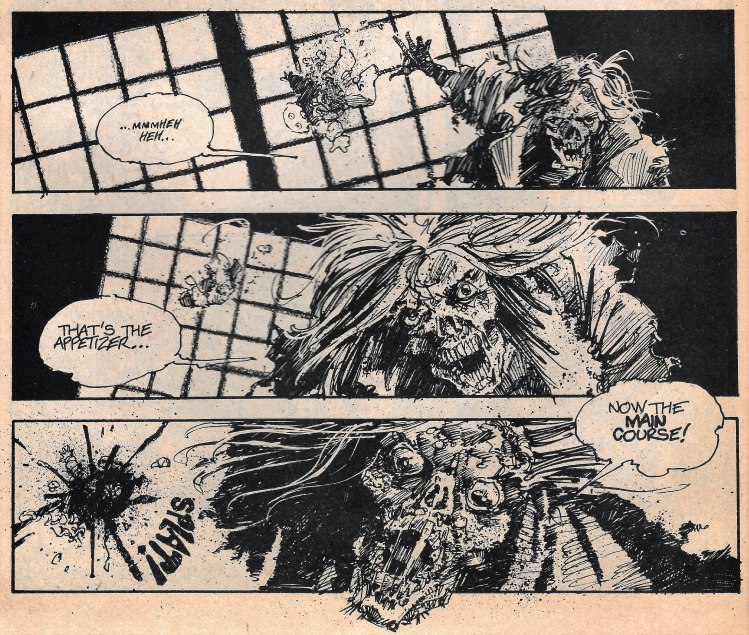 …before descending us into the very depths of Hell itself. 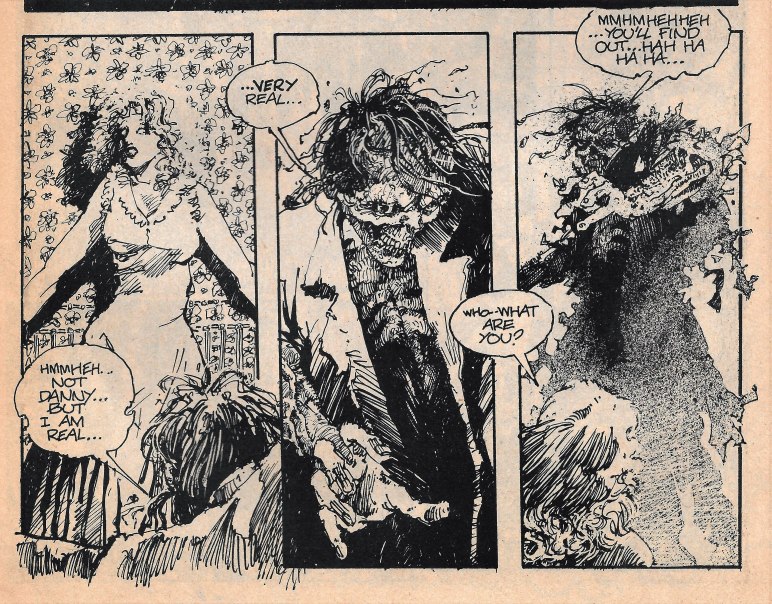 Well, at least we know where they got that cover idea from. This resolves itself into a dream that Donna, one of our cast of survivors, is having. I have no clue if this is a metaphor for her journey so far, if she's had a baby devoured or anything, but I can say that I would not put it past Deadworld to have done just that. 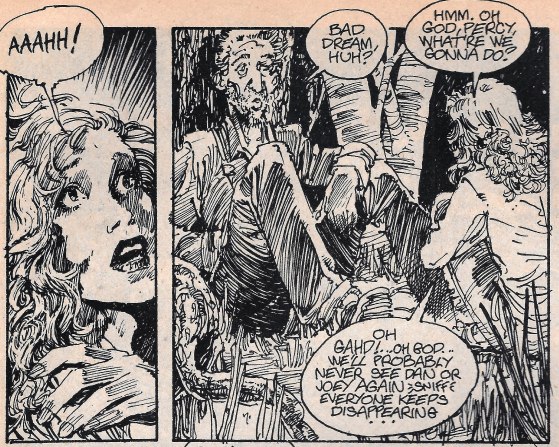 If you thought Kirkman's Walking Dead was tough on its characters, you are likely to think they have had a cake walk in comparison to these guys.

I also have to state that rarely has a comic made me not want to read anymore as much as Deadworld did. Count me as a "wussy" if you want, but there are usually lines drawn in entertainment. One of those is "No kids, No dogs" and that means there are things off the table.

In Deadworld they are the main course. Literally.

Donna and Percy, a mentally challenged companion, are alone in the forest, having gotten separate from their group of survivors when the place they were being held against their will fell to the zombies.

Which brings up a good point: Deadworld is populated by three distinct factions – humans who are hunted by zombies as food, regular zombies or "geeks" that are similar to Romero zombies, and thinking zombies that speak but are still filled with the same urges as the regular walkers. At least one thinking zombie is in this issue, a person known as King Zombie. King Zombie can control the zombie hordes and is working for actual demonic masters in their bid to conquer the Earth.

And right now more of King Zombie's undead minions start hunting them and they have to run. They come across one zombie strung upside down on a cross as one of KZ's motorcyclists zoom toward them. 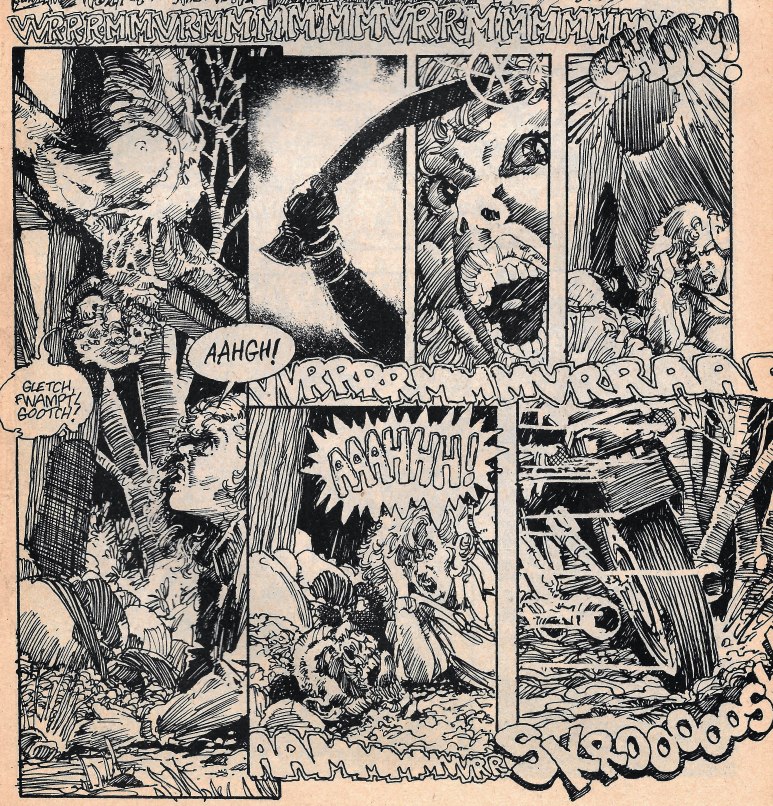 All isn't what it seems there, as the motorcycle screeches to a halt. We'll rejoin them toward the end of our tale, but for now we swing over to Joey, they youngest of our survivor band, and Dan, the trenchcoat wearing long-hair from Donna's dream. They are like wise wandering through the forest when this band of geeks happen upon them, so many that their goose is surely cooked. 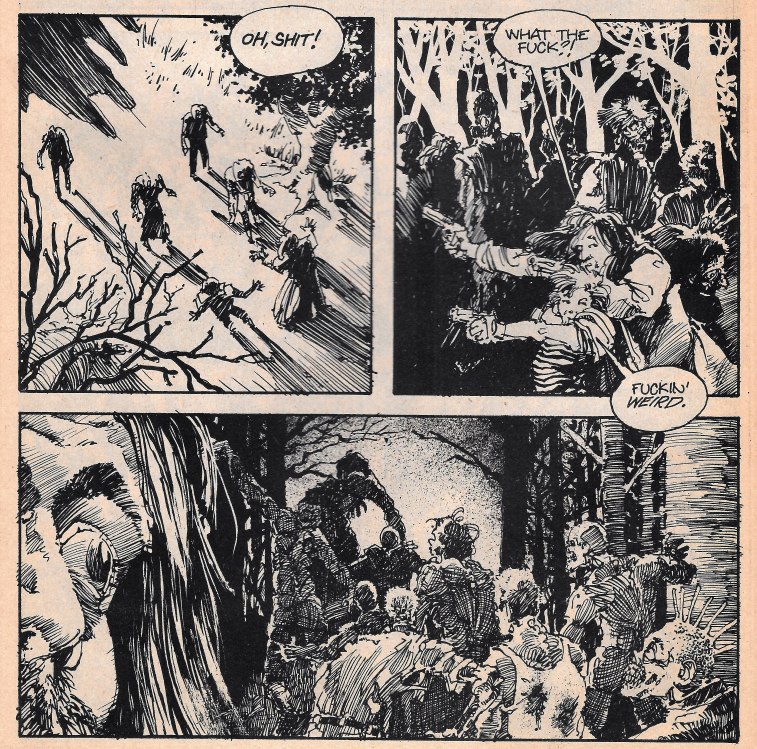 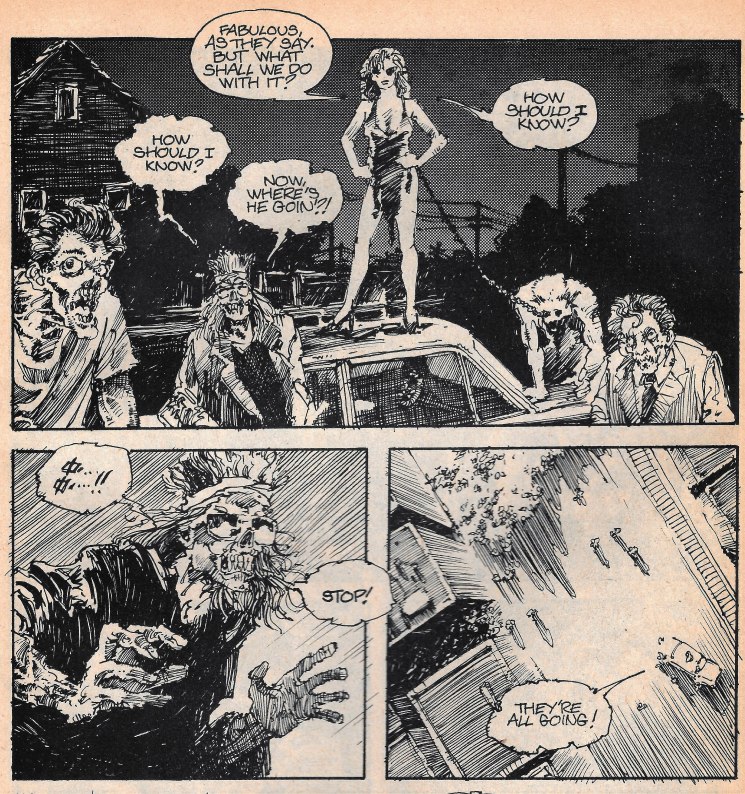 King Zombie isn't behind it, as we find him and his main squeeze (a human woman whose name isn't mentioned in the tale) just as perplexed. KZ aims to find out, though. 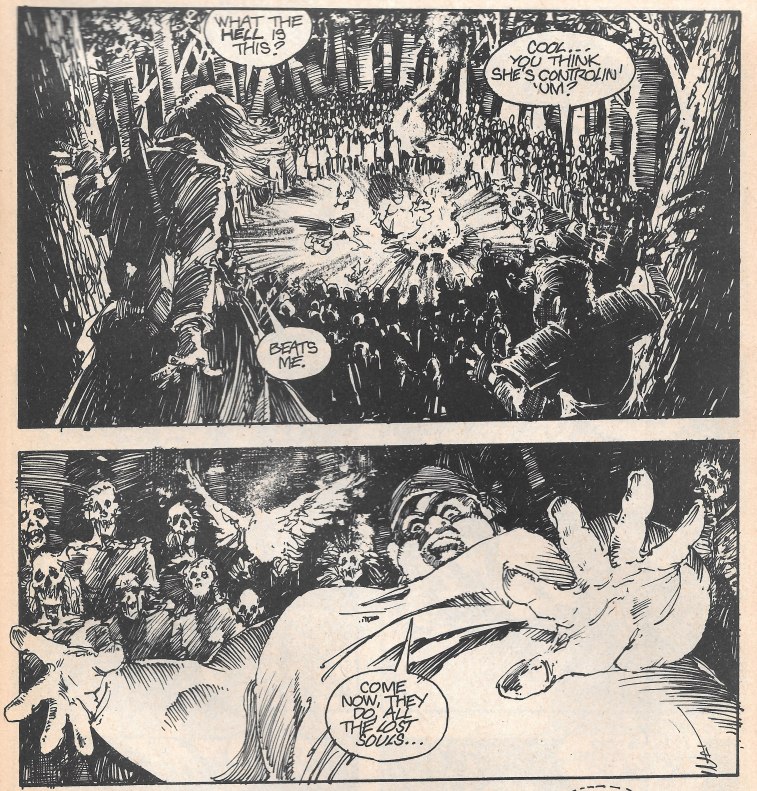 Appears the Zombies can also be controlled by some voodoo nonsense these people are spinning. And Dan, Joey and KZ all arrive at the same moment. Dan thinks this the perfect time to take out the leader of all the undead. 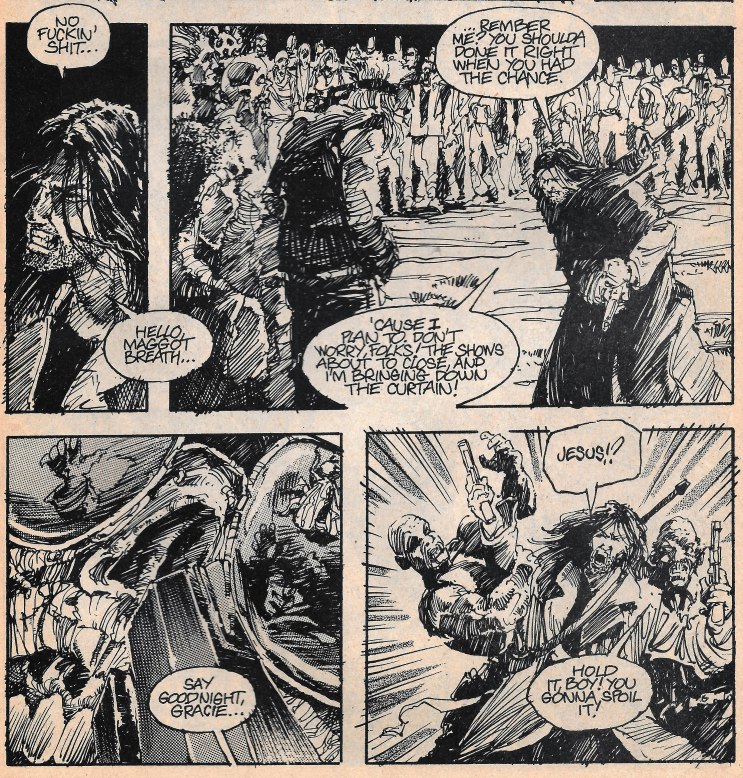 When restrained, he dangles the name of Deake in front of KZ, Deake being a guy who can open and close portals to KZ's demon overlords. 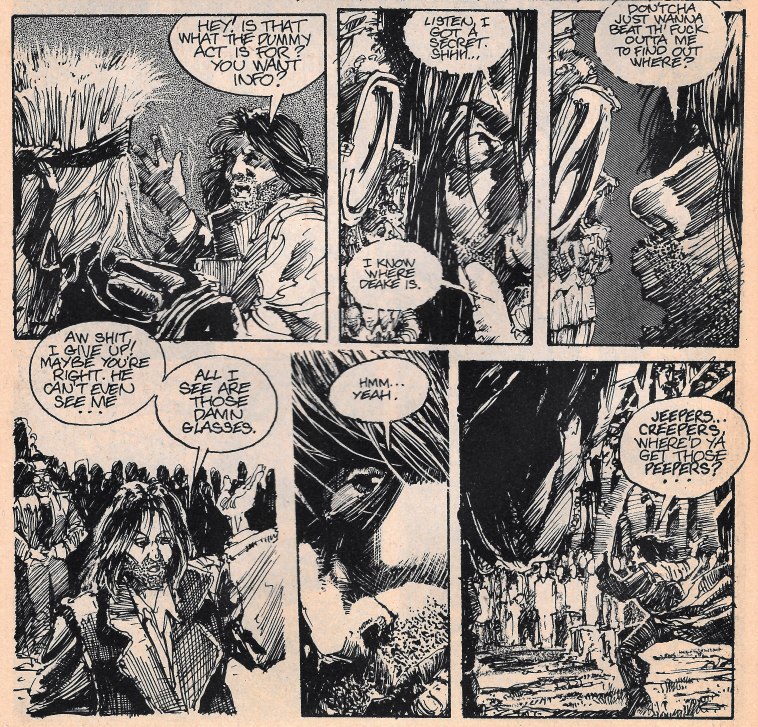 Still not budging, he assumes he could tell by looking him in his eyes, which might be true… 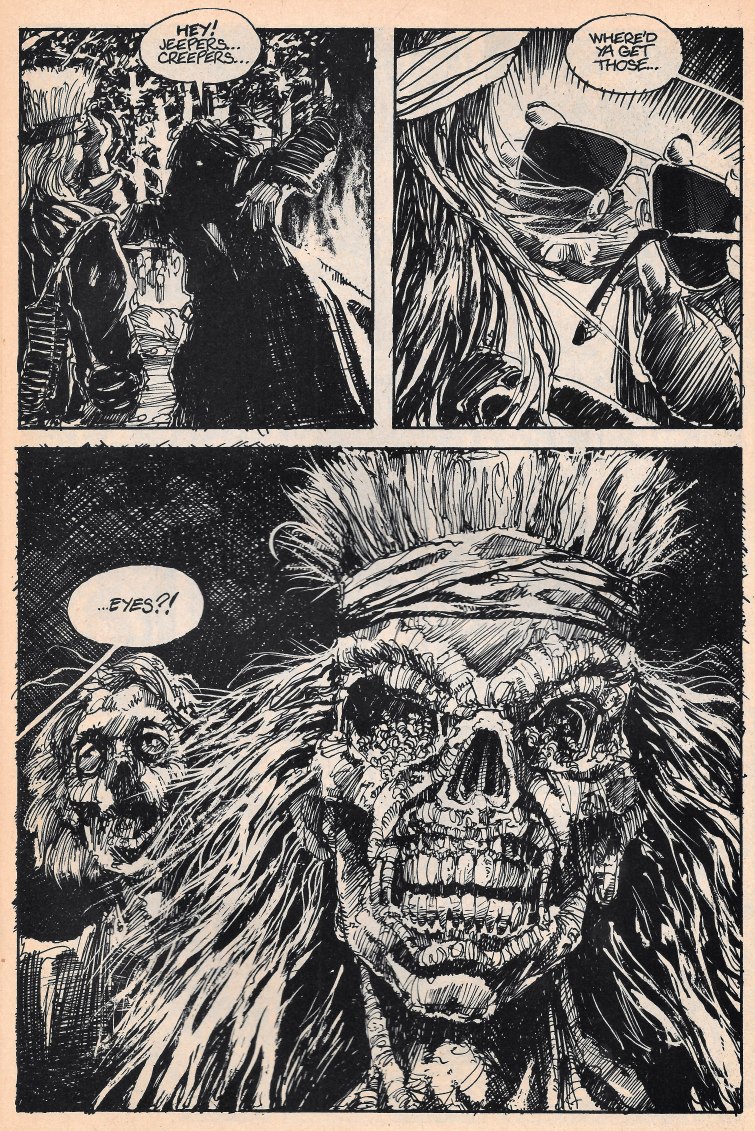 …if King Zombie had any.

Eeech! That's too gross for words. But hold fast. We aren't to the worst part of our tale yet. That comes dead last as we flip back to Donna and Percy, who have been saved by a band of motorcycle riding humans. But things aren't as rosy as they seem. 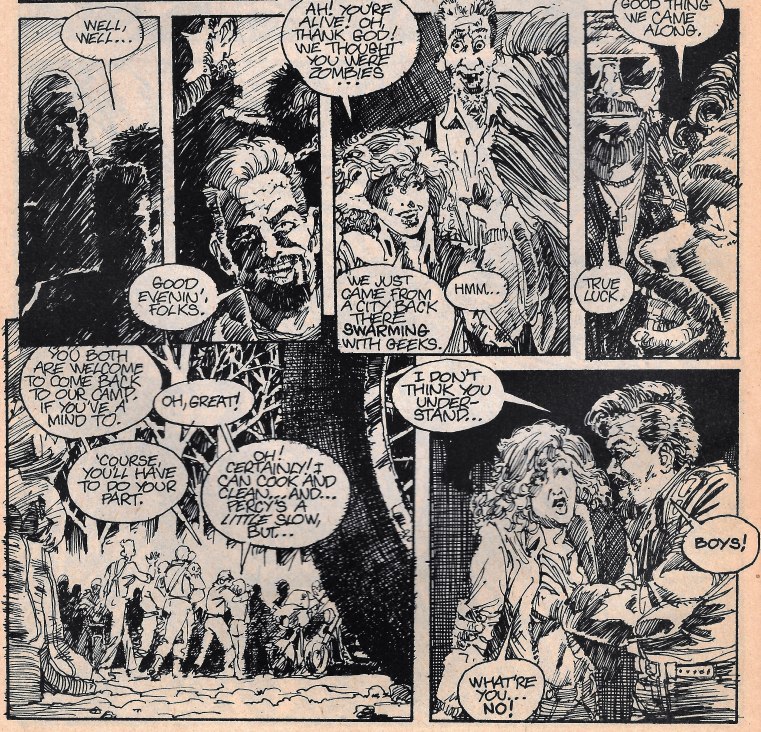 Yup. The book now shows the graphic rape of Donna at the hands of the motorcycle gang. I'm not posting it. It is heart wrenching enough just describing it to you. And Percy is no help at all. 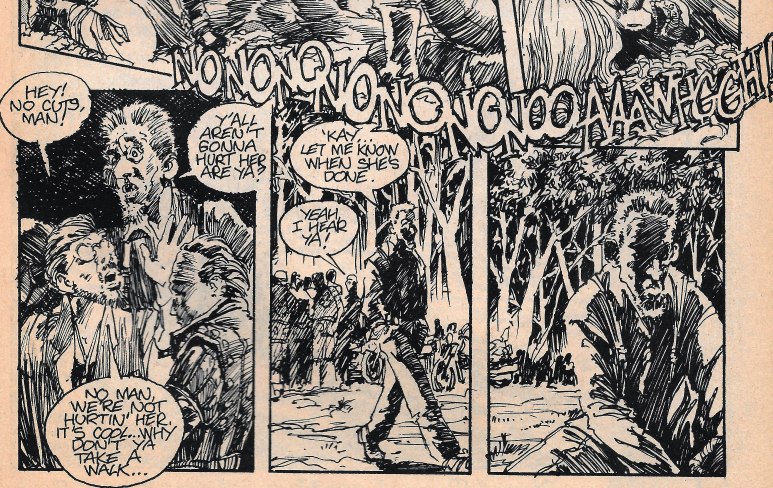 The title has since had several different revivals and one-shots through Image and IDW print houses, the last coming out in 2014. With the impressively gritty art and story, there is a lot of quality on these newsprint pages. However, the morbid mix of elements and tragic plotlines are too much for my soft heart. I would vote we give Deadworld a pass and sink our teeth into the kinder world of The Walking Dead. Those of you with stouter stomachs might disagree.

Posted by SonOfCthulhu at 3:34 AM