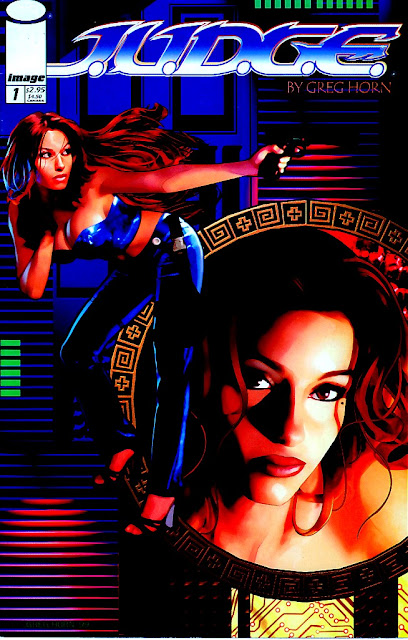 Is it Art or is it Memorex of Art?

Greg Horn is a phenomenally talented cover artist. If you’re like me, you’ve probably admired dozens of his covers without knowing who he is. And if you’re reading Secret Invasion, Witchblade or *ahem* Jenna Jameson’s Shadow Hunter, chances are high you own a cover of his or two. I highly urge you to check out the vast array of covers and posters he’s done at the link above. You may even recognize a few from your collection. It will cement in your mind that Horn really does great work on covers.

I want that thought firmly in your mind because I’m about to tear apart one of Horn’s first full-length comics, J.U.D.G.E. Horn is listed as creator, writer, artist, letterer, and designer. That last bit is kind of overkill. I guess he’s talking about breakdowns, but I’ve never heard that broken out separately unless it’s a different person than the artist. But whatever, Horn here has owned up for all the glory...so that means he also gets all the blame.

Why should Horn get blamed for J.U.D.G.E.? Partially it’s the art. Horn obviously has a beautiful wife, a bunch of buff looking friends and a digital camera. Every panel in J.U.D.G.E. is crafted by taking some still photographs and then digitally painting over them. While this can be tremendously successful tactic in crafting a single still image, doing this throughout an entire comic book makes for panels that are cramped and too bright. Shadows don’t exist in the world of J.U.D.G.E., they have been blotted out by the camera flash. Everyone’s skin glows so brightly that many pages are smears of hot flesh tones. Pages of art come off looking like someone cut a frame out of a movie, which doesn’t correctly convey action from panel to panel. And all of it is indescribably flat, with the digital painting covering up natural depth and shadow.

Additionally Horn’s story is as weak as the art. The plot follows a group of young, buff agents who have been augmented by some super-secret process. It makes them all stronger than normal, but the program can lead to mental instability or metamorphosis into complete monstrosities. A promising beginning and in better hands it might actually deliver a decent book. Unfortunately the agents are all pretty much generic jerks once you get past their painted on clothing and attitude, even the lead agent Victoria Grace. Horn thought so much of these characters that he provided character bios and a paragraph of introduction. Sadly they are on the inside back cover. You’ll only find it after reading the comic and by then you don’t care who is who anymore.

Let’s dive in so you can see what I’m talking about. We start with one of the new augmented agents succumbing to a bout of depression. He takes a loaded pistol to the temple and pulls the trigger. We pull back and find that the whole thing was recorded on video and our new agents are being shown their companion blowing his head off. Why? Because this is suppose to teach them to be more observant of each other’s moods. This is one of the most demoralizing tactics I’ve ever seen. 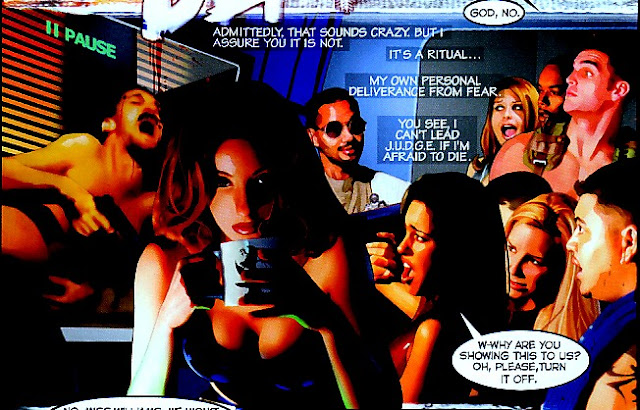 Victoria is front and center in the panel. The model for Vic is Greg Horn’s wife. Throughout the book she’s depicted in hot outfits that defy gravity and would be as inconvenient as heck. No one outside of the chicks on that TV show V.I.P. wear high heels to a stake out. Since this is the first group shot panel, Horn feels he has to show every character in the book. It’s more crowded in that one panel than in a bathroom during Oktoberfest. You can easily see in this panel how the book suffers from “filmstrip-itus”. Frozen in motion, people end up with goofy, unnatural expressions on their faces. Check out the brunette chick to Vic’s right and also the look on second-in-command Nick’s (top right) face. So unnatural, you have to stifle a laugh.

Victoria berates everyone for their teammate’s death, which is a management technique I haven’t heard of before – belittle people in a traumatic situation. But it’s all good. Did I mention that they will be giving these folks deadly weapons in a few pages loaded with ammo? Sure hope none of them harbor a grudge for being blamed for their partner’s death.

Anyway, after a verbal tongue-lashing the troops are released to have fun at the circus before they go on their mission. No, I’m not joking. Check out the background here. It’s like Horn played cut-n-paste with some photos of a county fair. I don’t think he even painted over any of the objects.

Thomas Crowell is the mediator between the government and J.U.D.G.E. organization, and he’s a bit steamed at Victoria. It’s pretty easy to see why, since she just told them in no uncertain terms to either shape up or kill themselves. Note that while Victoria may not be portrayed as the sharpest psychologist (according to the back page she’s trained in “occult, mysticism and a master psychologist”), Horn always makes sure she is the finest piece of azz you’ve ever seen. Her porn star-esque good looks are about the only thing the book gets right. Just what you’d expect from a cover artist. 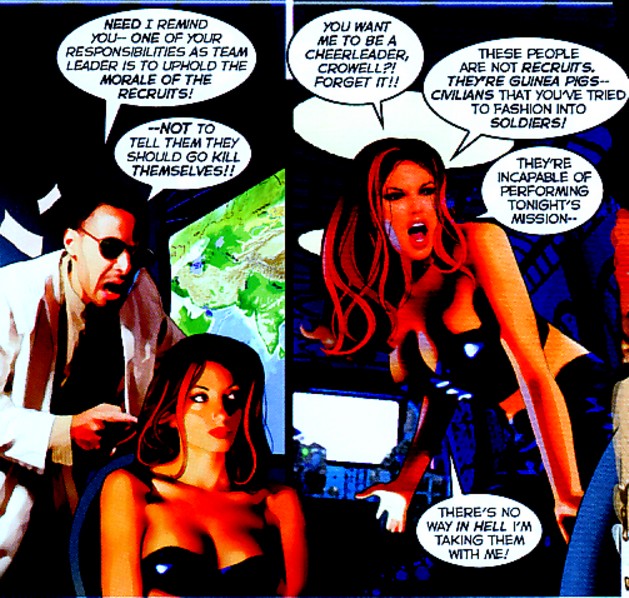 The next section of the book diverges from realistic settings and into an occult retreat in Tibet where Hu, one of J.U.D.G.E.’s senior operatives, is meeting with mystical wise men. These panels work the best out of the whole book, mainly because there aren’t characters stepping all over each other and because Horn actually gets to create art instead of just color tracing a photograph. Sadly this is over in three pages. Hu is the guy that brought the J.U.D.G.E. organization the augmenting process and he stole that knowledge from these mystics. He wants absolution, but to attain it he’s told that he may have to face his teammates in battle. Don’t worry, the title ends at issue 3 and Hu’s arc looks to have been planned for issue number 4. 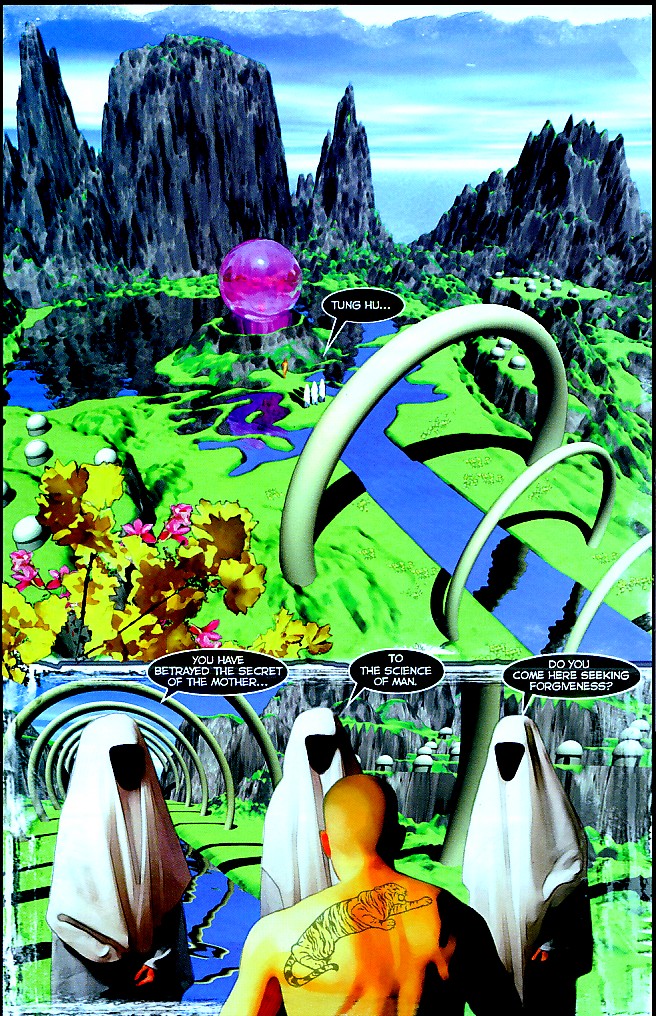 If you thought that first panel was crowded, check out this circus shot. This is possibly the worst offender in the entire book, with objects in the background rendered as just dots of color that merge into a flat collage.

As for our main characters in the foreground, they bicker and fight with each over insignificant crap. It’s like watching a group of nine-year-olds. Even Nick does it. The disconnect with the audience is so great that I wouldn’t care if they all died right now. Here’s a brief sample. 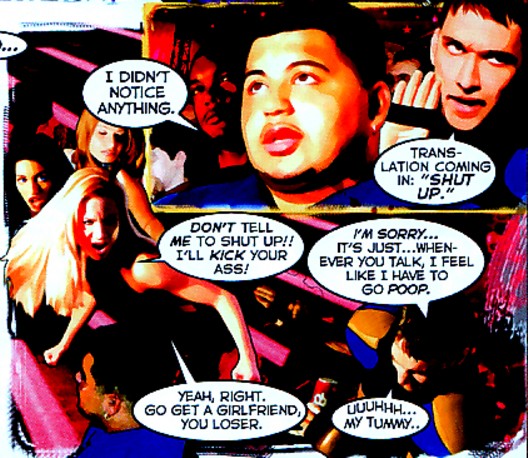 Somebody turn the fire hose on them. So Victoria and Nick have this team of green augments who’ve never seen battle before. Nick thinks that some or all of them are going to get killed (He’s right! He’s right!) and warns Victoria. Since she’s following Crowell’s orders, Victoria ignores his warning and we end up at the cemetery preparing for a hit. Seems a convoy of baddies are on there way to one of the crypts. The recruits spend most of their time sitting beside tombstones, posing for non-existent camera shots and bitching/screaming at the top of their lungs at each other. Sheesh, Helen Keller must have taught these guys about stealth. 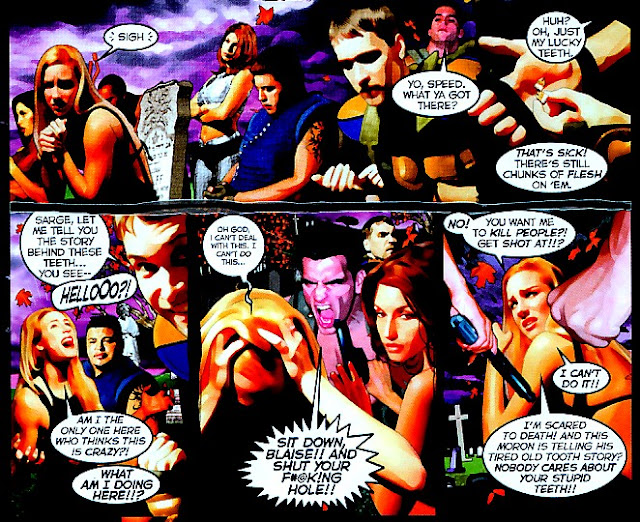 When the three cars actually show up, our fat explosive expert screws up the detonator, causing the wrong car to go boom. In the multi-page wild melee that ensues, the head bad guy gets into the crypt. Nick runs in after him and Victoria moves in to cover followed by the chick in the red outfit that stands around with her mouth open all the time. What they find is suppose to be gruesome, but ends up looking rather silly. Meet our head bad guy: No-nose. 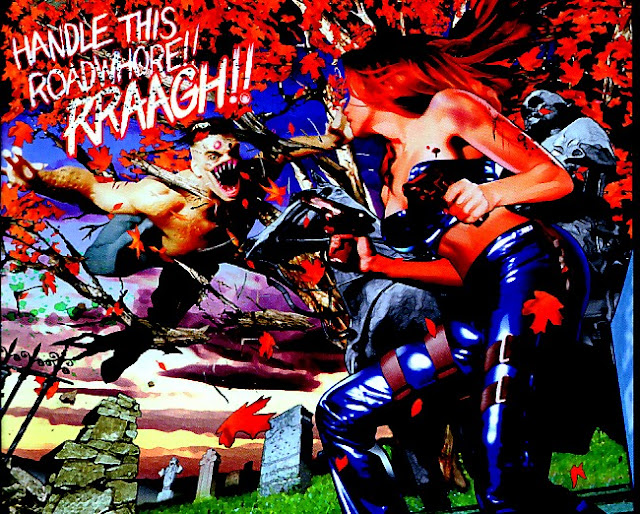 I’m not even going to talk about how fake he looks bursting through those tree branches. And I don’t have to mention the “no-nose” thing. As a character design idea it really…well…stinks. Not that the creature would notice, of course. Nick is downed with a giant gash on his forehead and the other chick nearly buries everyone by using her voice power to bring the stone crypt down around them. Victoria escapes but is pursued by the freakshow. Seems that bullets have no effect on him. 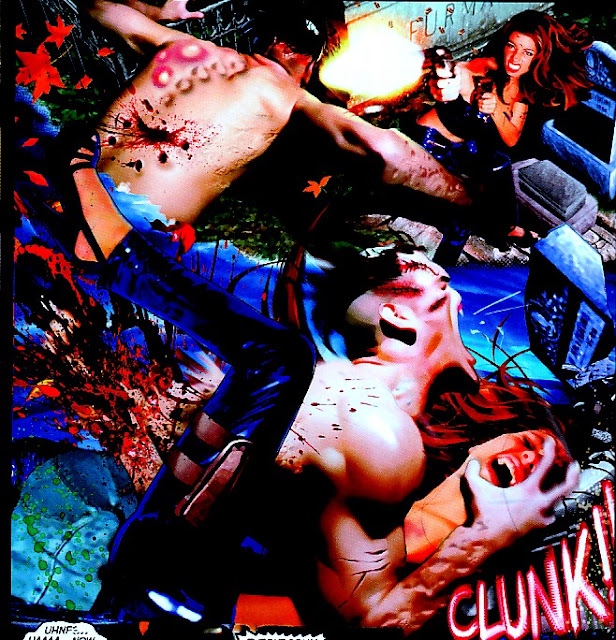 Neither does he have to obey the laws of depth perception. Yug, what an ugly panel. He gets the best of Victoria and is about to chow down on her, when suddenly he gets scared that Horn might draw him worse than he is now if he eats the chick that’s the stand in for Horn’s wife and runs away. Really. He just drops her and runs when someone says “Hey, everybody. Look over here (at this dead body).” Believable plotting comes natural to Horn.
All the surviving agents run over and we all know it’s going to be Nick, mostly because he was inside the crypt when it was destroyed but also because he was foreshadowing before the mission by saying “someone might get killed. Even me” or words to that effect. But we make it there and surprise! It’s the chick in red that brought down the crypt. How she died is a mystery since she was shown running out before Victoria. 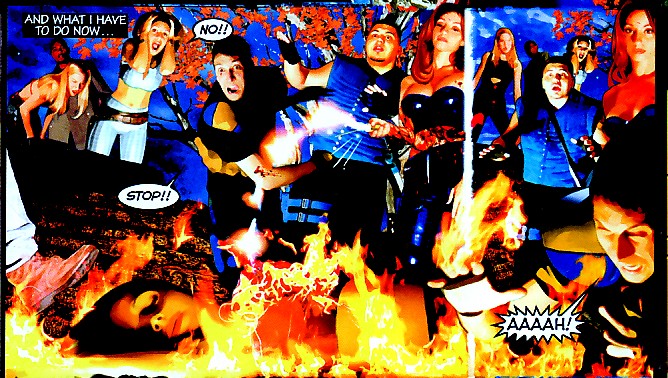 No matter how implausible this all seems, no one could expect what happens next. Victoria without ANY warning uses a flare to burn the body to a crisp. Which is hard on the goofy guy on the left because he loved the girl who died AND WAS HOLDING HER BODY WHEN VICTORIA LIGHTS IT ON FIRE. If I was him, I’d quit now.

Thankfully that’s the end of issue one, with Victoria going off to play like her gun is loaded and she’s shooting herself to prove how tough she is. I’m kind of wishing there was a way to fill it with bullets.
Posted by SonOfCthulhu at 6:33 PM