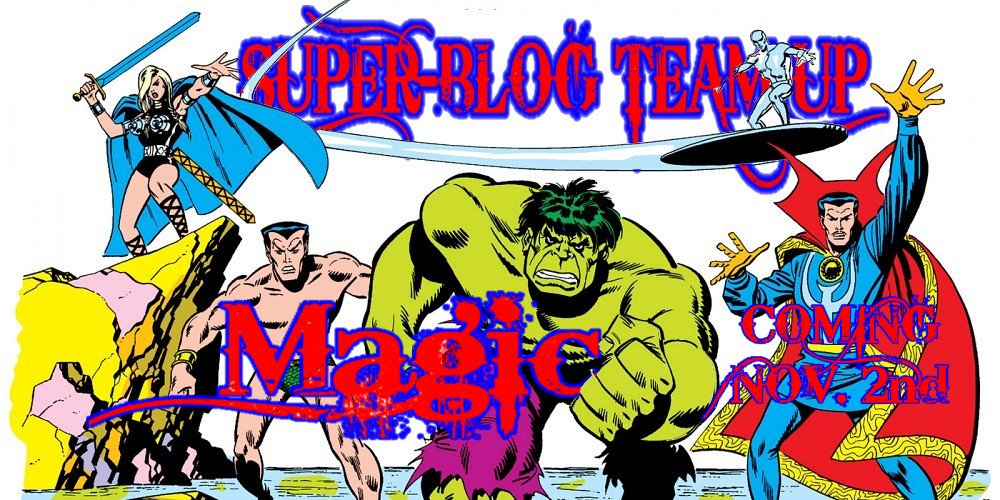 Welcome to the Super-Blog Team Up:
Magic Edition!

Before your very eyes, watch as ten blogs conjure up magic like never before. Celebrating the release of the latest entry in the Marvel Cinematic Universe Doctor Strange!

Just follow the links at the end of this article for more mystical articles that are sure to leave you spellbound... 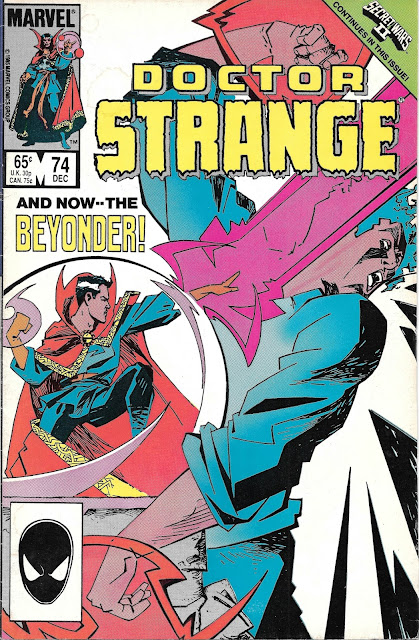 A crossover that retreads familiar ground


Continuing to cover just what it takes if you want to become the Master of the Mystic Arts for this entire multiverse.
Part 1: Wisdom
Part 2: Determination and Wonder

The Makings of a Sorcerer Supreme: Optimism and Sacrifice


Secret Wars II, the follow-up to the 12 issue Marvel Secret Wars series was really all about the tie-ins.

The story continued the tale of the Beyonder, a God-like being of impossible power but limited understanding. He existed on another plane where he was everything, but some event made him aware of the Marvel 616 universe. Once he discovered this realm of utter chaos, there was no way for him to ignore its existence.

First he sought the answer to which was stronger, good or evil. To that end, he created Battleworld and threw superheroes against super villains in a contest to see who would survive.That got him stripped of his powers by Doctor Doom for a short time and not many answers.


Thus he decided to come to Earth, create a clone of the perfect man (Steven Rogers, 'natch), and wander among us to try and figure out humanity. And that's where we are in this Secret Wars II tie-in, of which there were so many back in 1985-1986, with The Beyonder arriving to seek wisdom from Doctor Strange.

And because it is a tie-in, it is also an attempt to lure new readers to the title. I'll show you how they do that in just a bit.

What we will find contained within the issue aside from that story is two of the key traits of a Sorcerer Surpreme: Optimism and Sacrifice. We begin with an ending. Strange has assisted his lady-love Clea from wresting control of her home plane, the so-called "Dark Dimension" from control of her evil parents, Orini and Umar. 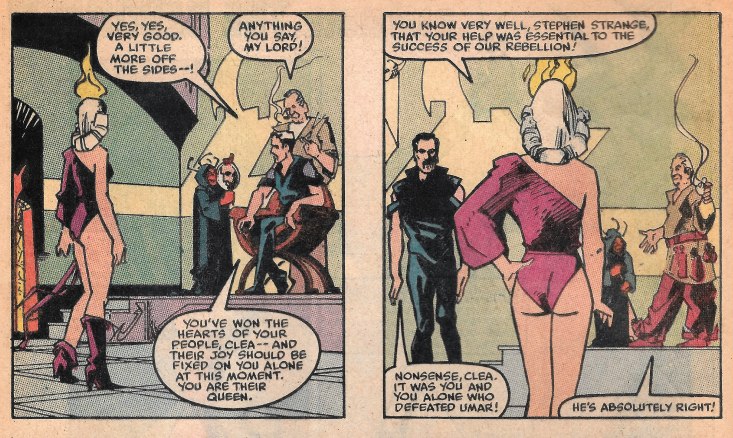 Clea is wreathed in the "Flames of Regency" something I originally thought was a physical characteristic of a much earlier ruler and Clea's Uncle, the Dread Dormammu. They complete a rite that banishes Clea's parents forever, since they were corrupt and evil beings.

Clea had been Strange's love interest since very early in the series and with her becoming the ruler of the Dark Dimension, Strange knows their love can never be. This is a very heart-wrenching thing for me as they always seemed made for each other. Here, Strange is giving up personal happiness willingly for the good of everyone. He tries to kiss her fair well, but first some eyes interrupt their liplocking. 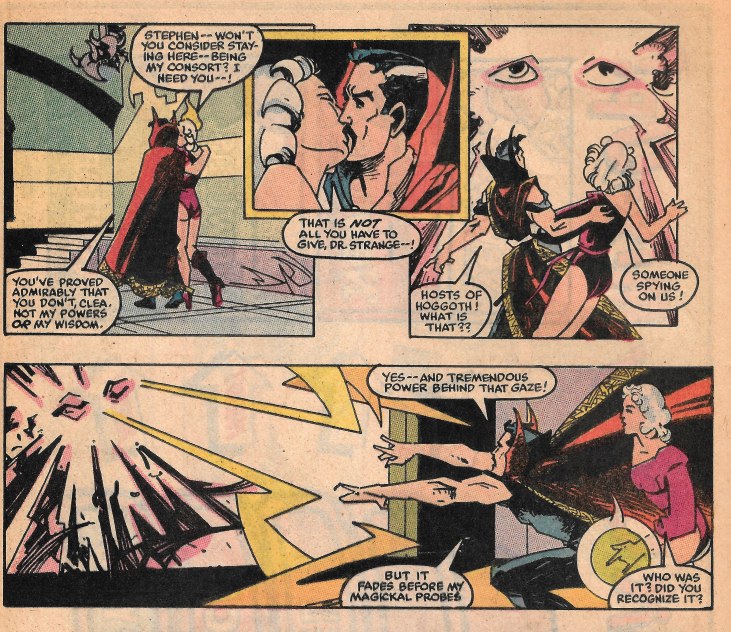 Sheesh, A Sorcerer Supreme can't even get a decent goodbye kiss.

And yet he does not lament this, but instead encourages Clea, believing that the universe will provide them both with happy futures. I don't believe I could ever be that positive. 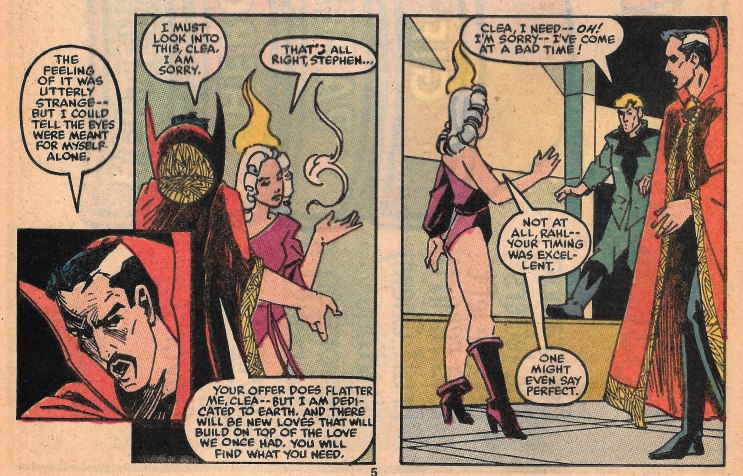 He sets off immediately. The trail of that powerful entity that totally lip-blocked his last kiss with Clea leads back to Earth and Strange's very own Sanctum Sanctorum (Holy of Holies) in Greenwich Village. 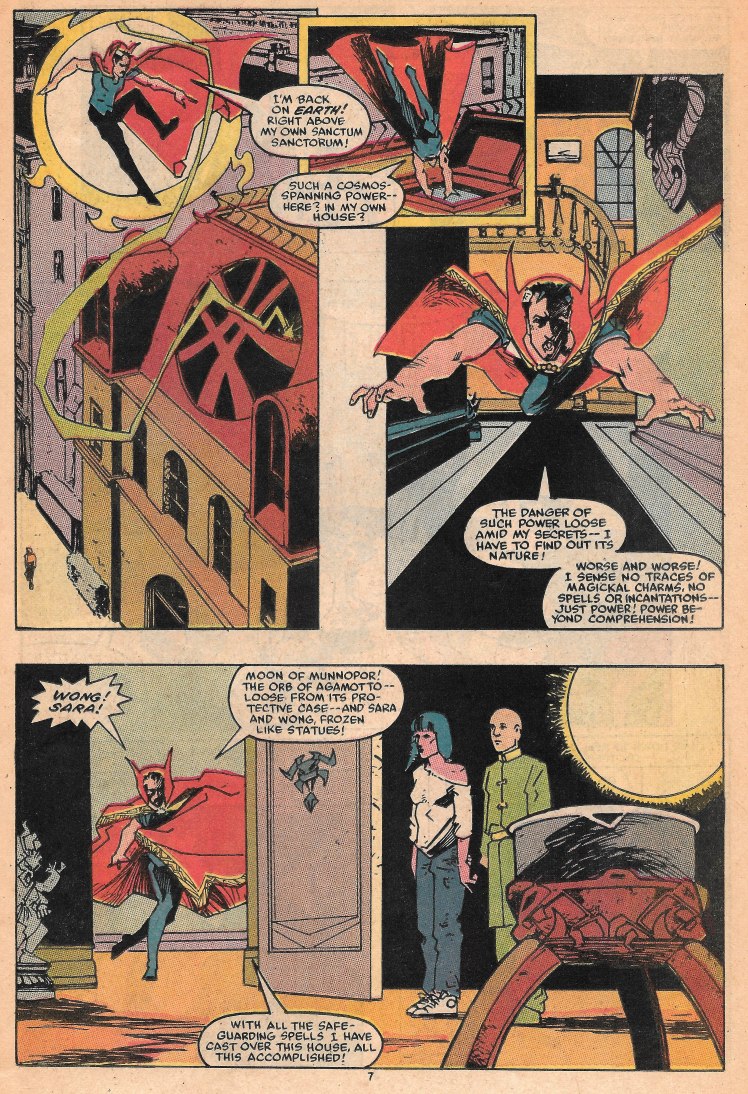 And I have to say that I love Mark Badger's art work. So much going on in the way he styles poses and lays out the page.

Wong and Sara recount their visit from an odd powerful being who burst through the house's defenses, immobilized them and proceeded to tear the cover off the Orb of Agamotto looking for Dr. Strange and answers to questions that have no real answers. Again the art really comes through when delivering emotional content from the figure placement, facial expression, and posture. 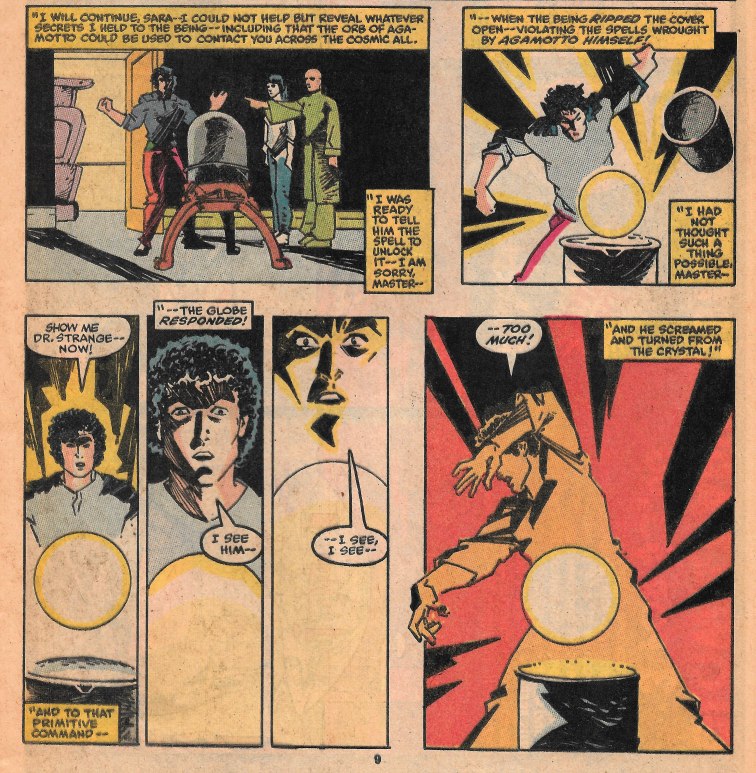 After hearing this tale, Strange searches out the being from Beyond (he had yet to determine who or what he was. Strange did not participate in the Secret Wars) and finds him drunk at a local bar. 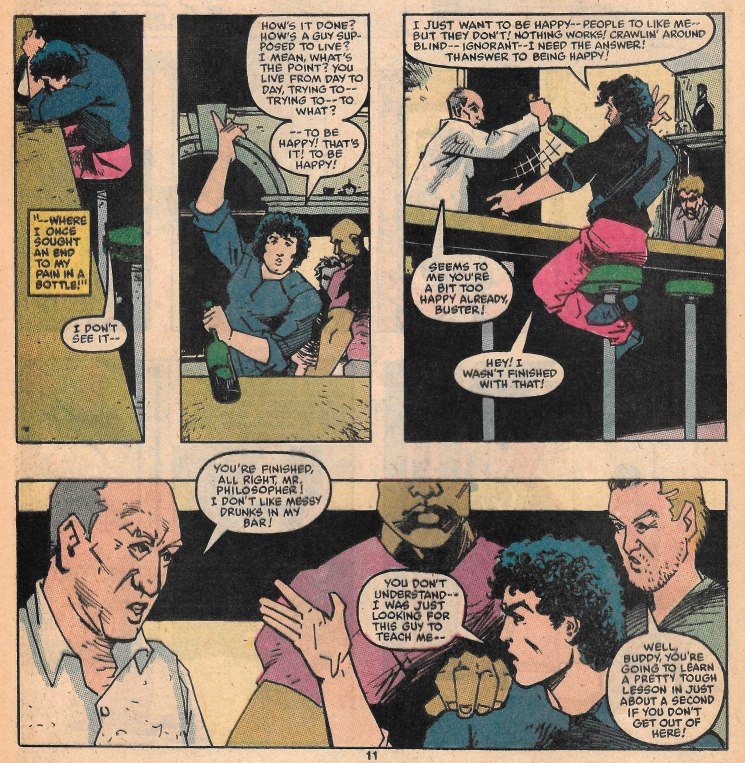 Seems the Beyonder only wants to find happiness, but can't quite figure out what it means or how to achieve it. Again these are perplexing philosophical dilemmas we all face, only blown up into comic book proportions. The neat thing is we are going to get to see Doctor Strange apply his East Asian mystical take on these problems. 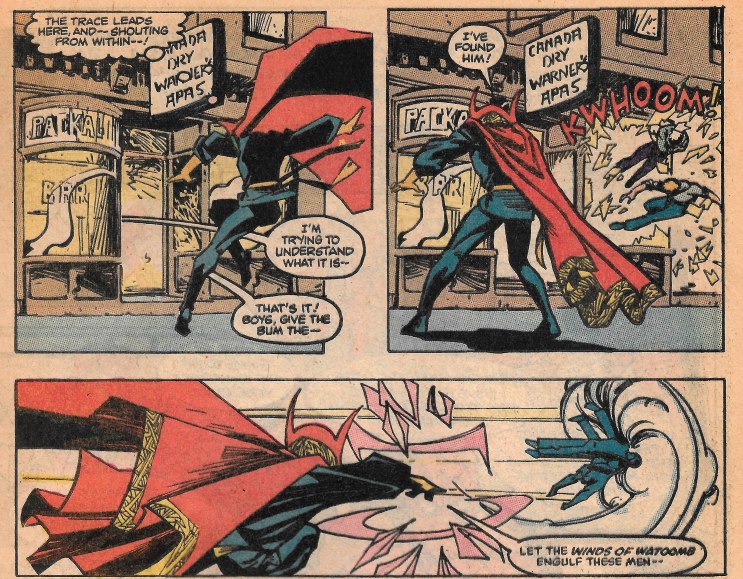 At least he will after he rescues these bouncers trying to throw the Beyonder out of the bar from going splat.

Instead of an enemy spoiling for a fight though, Dr. Strange encounters a very drunk and needy Beyonder. Love Badger's added touch of the barkeep tossing one back in fear. 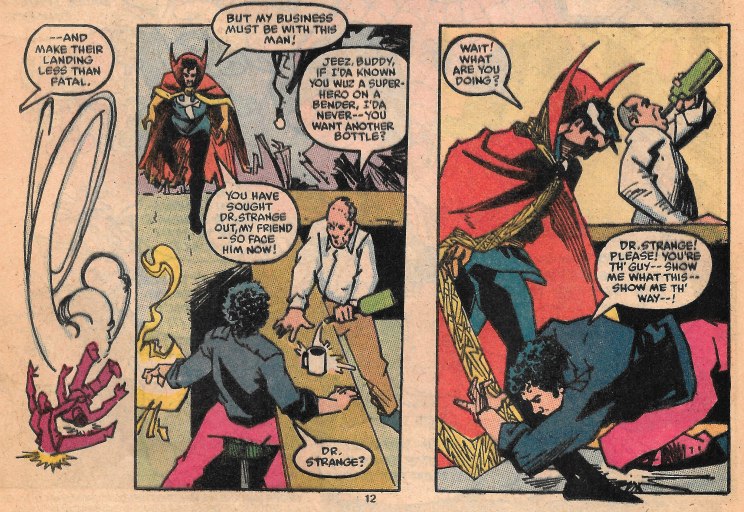 Not knowing who this is, Doc uses the All-Seeing Eye of Agamotto amulet he wears around his neck to look into the Beyonder. What he sees (images of how it discovered our universe and Earth) is brilliantly shown in the bottom half of the page, I just wish there had been a better color panel on the shot of the Beyonder in Molecule Man's apartment. Love Strange's body language, though. 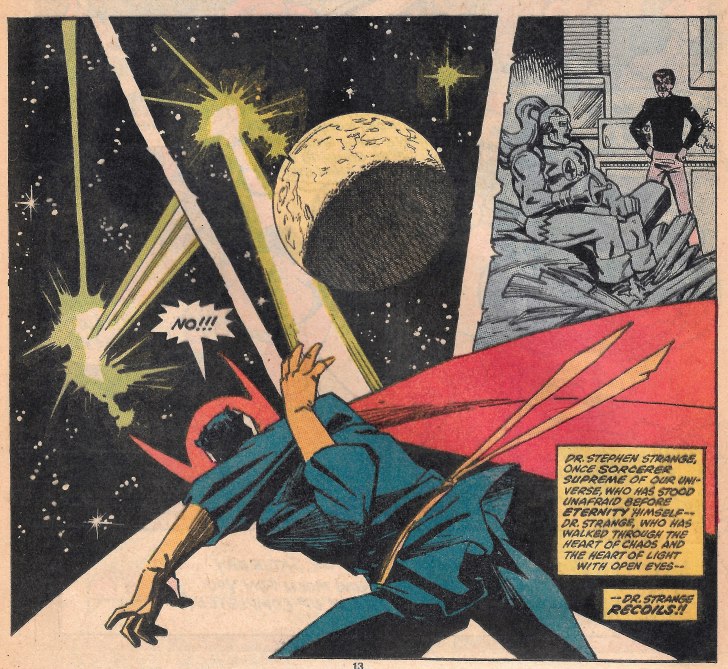 This knowledge of what the Beyonder is staggers him. He sees a being that is "power to make and unmake – Power and things beyond power!" For a moment he is tempted to use the Beyonder's trust to destroy him. In the end though, Doctor Strange chooses to believe that the Beyonder can learn the wisdom to control his power for good. It is a defining moment in Strange's world view here. This being could destroy all life and Strange has a chance to stop him, but in doing so means he will believe the worst about fate, destiny and all living things. That's just not who Doctor Strange is.

So instead he recounts his origin. Because it is a great morality tale as well as the Secret Wars II crossover makes a good jumping on point for people unfamiliar with the character. Yes, Marvel is making the track of this story a business decision. Luckily it works even if it is so transparent.

Stop me if you've heard this one before: A brilliant surgeon is kind of a jerk to people, doesn't count his blessings, and really has it coming to him… 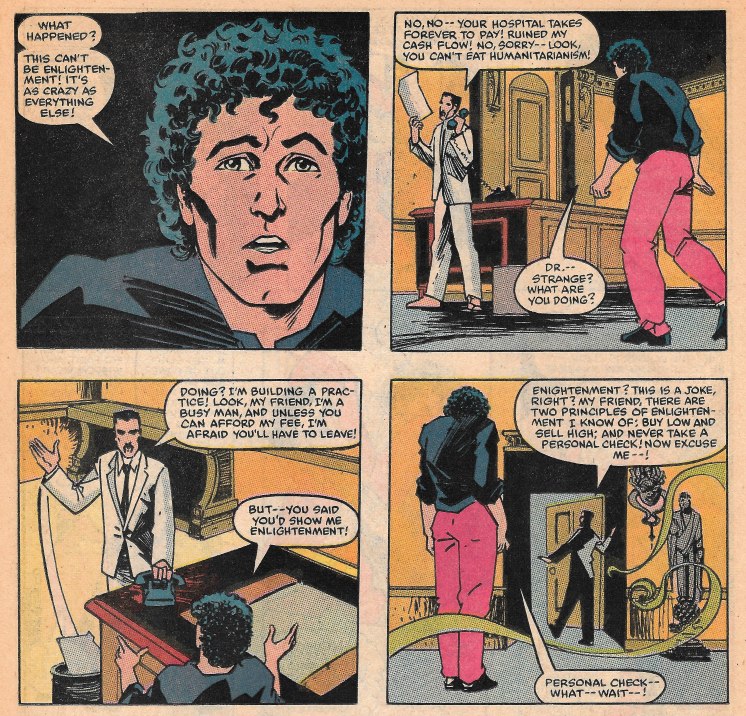 …karma pays him a visit, in the form of a car accident that ruins his hand's ability for fine surgical detail work… 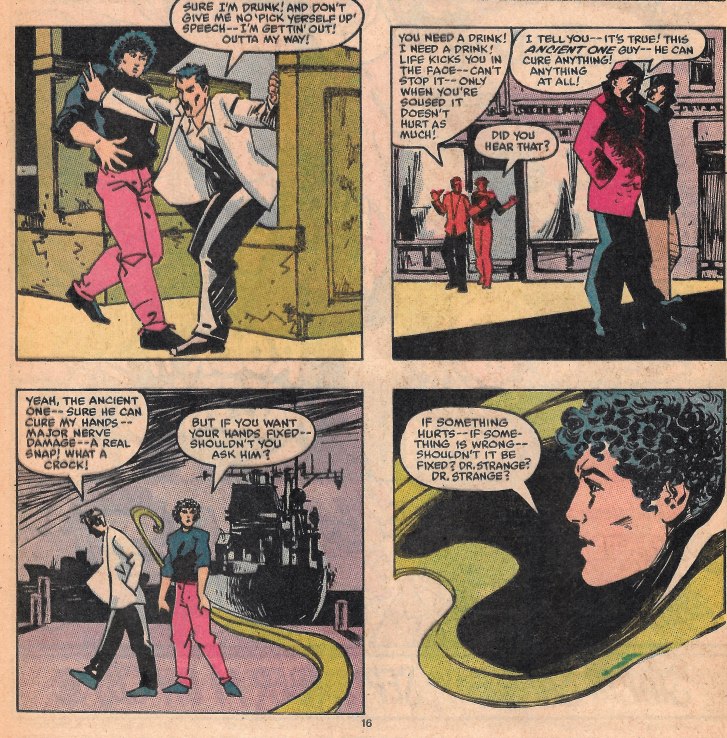 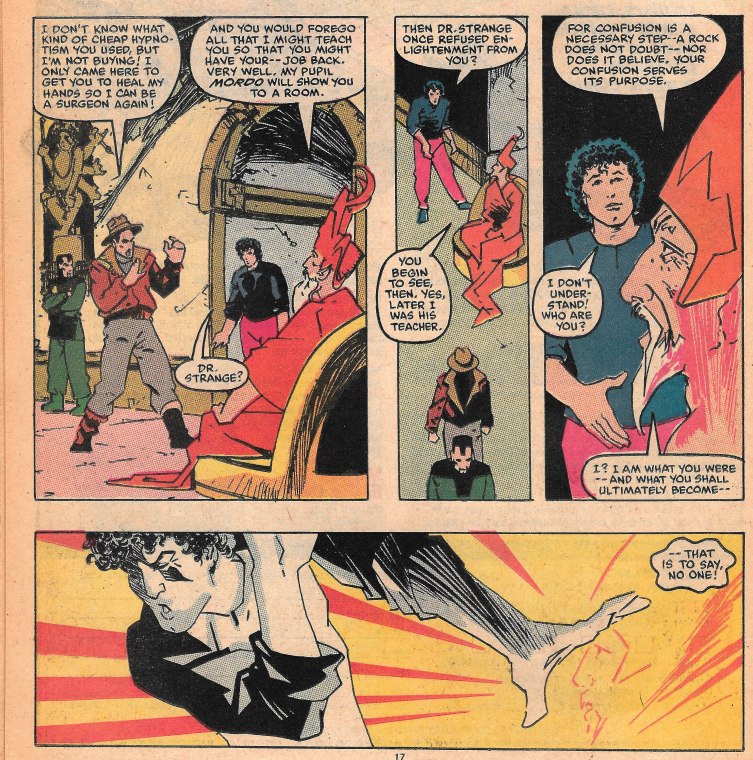 …who agrees to heal his hands, but infers the good Doctor could learn so much more, to which the Doctor gets mad and tries to leave… 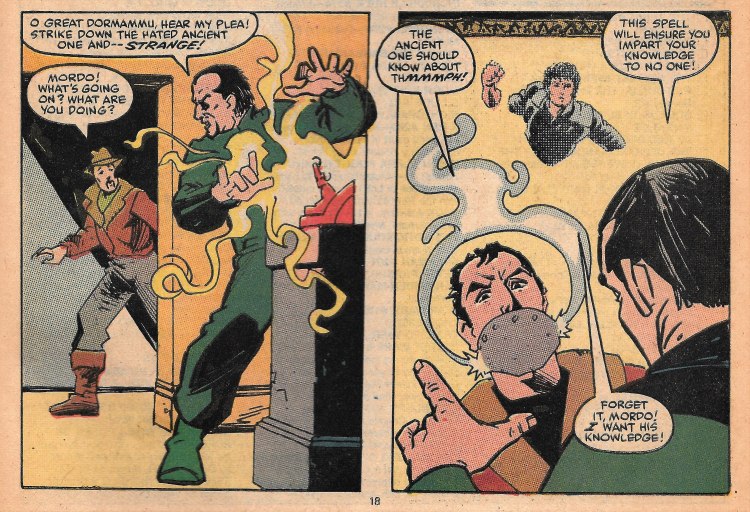 (and the Beyonder can't touch for some reason) 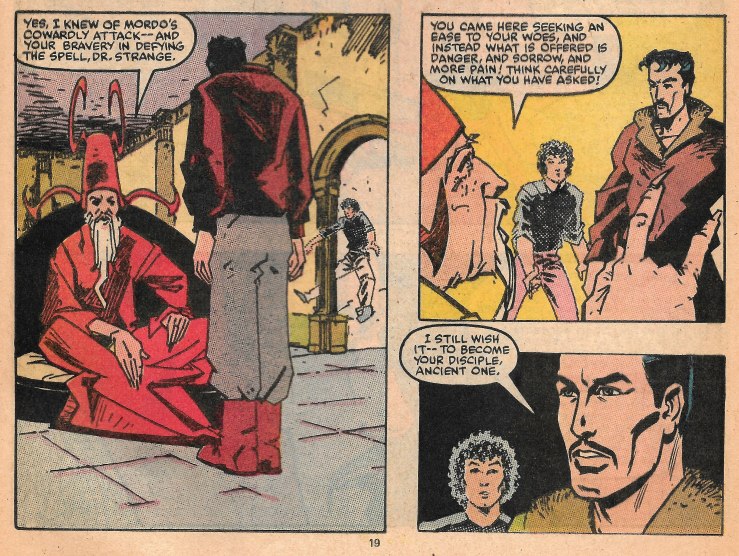 …thus forcing the Doctor to give up his dreams of returning to the life he knew in exchange for staying with the purpose of protecting the mystic's life with his own (even though the guy totally knew what was going on anyway.)


Sorry to recount all of that, but his origin is one of my favorites.

Meanwhile, getting back to the Beyonder's dilemma, he is a bit confused by what Strange is trying to teach him. The concept of self-sacrifice has little meaning to one who was the only thing in his prior universe. Yet as we hear Stephen tell it, his foregoing the use of his gifts for his own person gain to the point of even giving up regret over that choice is a core principle that he lives by. This is an astonishing insight into what makes the good Doctor tick. 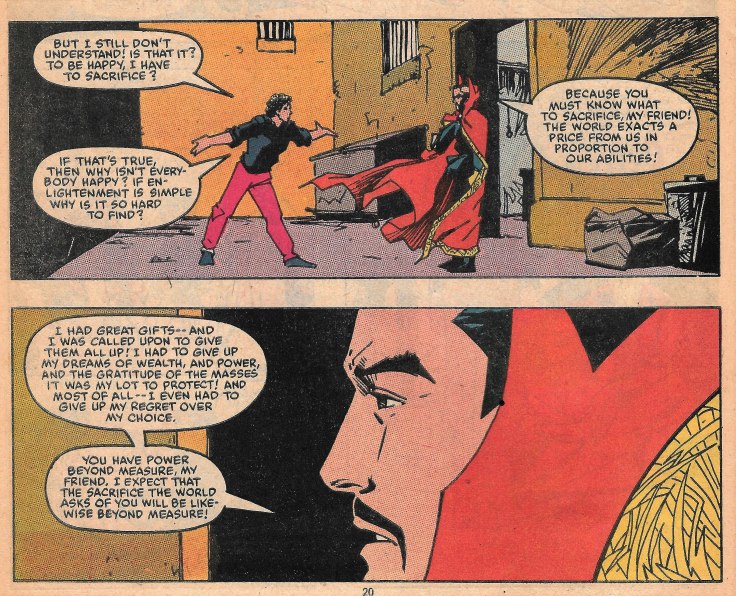 And as long as you are asking, yes I do really dig this "Kung Fu" wisdom stuff. It is always neat to hear comic book characters justify their viewpoints in philosophical debates. Great stuff from Gillis in these pages. 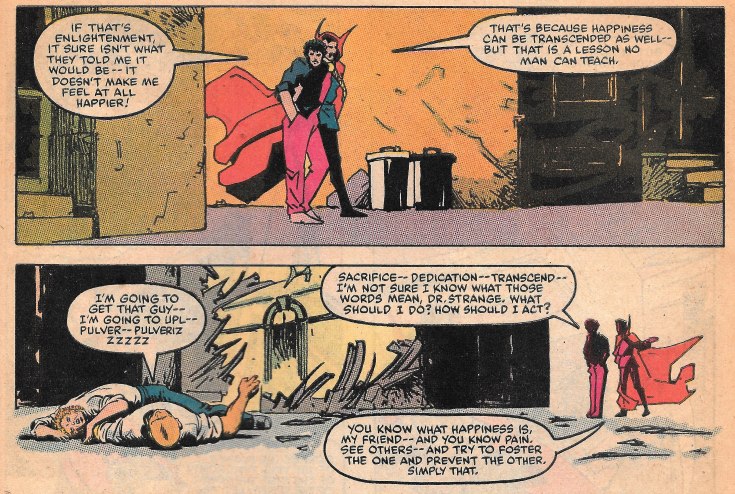 The Beyonder leaves thinking he has learned his lesson (he hasn't really, but more on that in later Crapboxes), but in parting tries to put the bar back together. He is still a bit drunk and makes a muddle of it, but Doctor Strange fixes it after he vanishes.

His presence does make the Doctor wonder a bit, and in those musings we find a final bit about that optimism I was speaking of earlier. 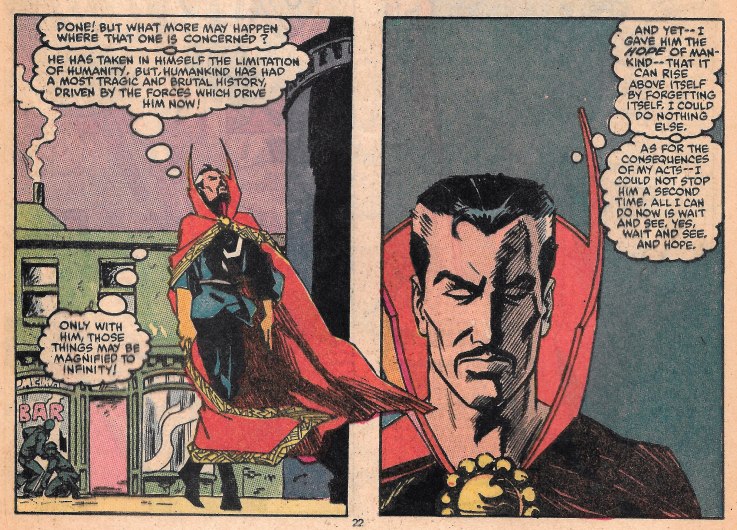 In all, the issue is a hit. Even for a tie-in that spends most of its time recounting an origin, there is enough good in the art and philosophy to make this one a hearty recommend. And I plan on keeping my eye out for more Mark Badger around this era.

For more MAGIC than you can shake a wand at, click the links below for supernatural hijinks from all of the Super-Blog Team-Up Members


Between The Pages
The Wonderful World of Doctor Strange

Chris is on Infinite Earths
Doctor Strange and Batman

Retroist
The Other Dr. Strange Film