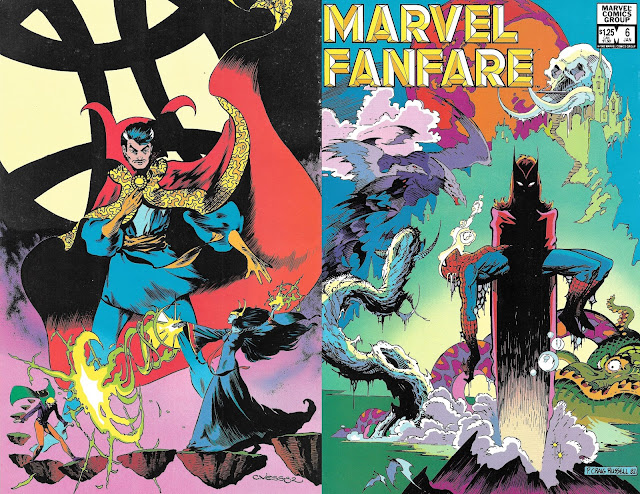 A short intro story to kick off our Doc Strange countdown

We only have five days to go until Doctor Strange drops so we need to make good time. I'm of the mind that most folks don't know who Doctor Strange is nor what he means to the Marvel Universe. I've taken it upon myself to pull five carefully selected tales from the Crapbox that give you a good idea of the mage. Not just anyone could become the Sorcerer Supreme of an entire dimension. These five articles will give you insight into the man who wears that mantle.

The Makings of a Sorcerer Supreme: Wisdom

I've always had a lot of love for the Marvel Fanfare title.

In an age of cheap paper insides, Marvel Fanfare was a class act. The book featured slick pages with top-shelf writers and artists telling out-of-continuity tales that usually weren't book length. It was a neat title.

And popular. Or at least popular enough to last from March of 1982 until January of 1991, almost ten years later.

It was bi-monthly, however, making it hard to remember to pick it up. And not always did the stories it contained feature heroes that you cared about, so you didn't automatically add it to pull lists. At least I didn’t'. I'm kicking myself now over not doing it, as the few that have turned up in the Crapbox are really good tales told really well.

Al Milgrom served as series editor and had this to say about the book.

" It was intended that [Marvel Fanfare] would appeal especially to the fans. [I] tried to get the best possible stuff (…by either established pros or talented newcomers). At least part of the purpose was to use better paper, more elaborate, detailed coloring and, by charging a higher cover price, to eliminate all those unsightly ads. The creators were paid a bonus 50% rate, too. I was sometimes 'accused' of just using up inventory material — as if that was necessarily a bad thing. I did use some inventory stuff — if I thought it was of high enough quality…"

Inventory stuff or not, this Doctor Strange tale from issue six is great stuff. Roger Stern is at the helm and he is doing his usual great job. We begin with an arrival at 177A Bleecker Street… 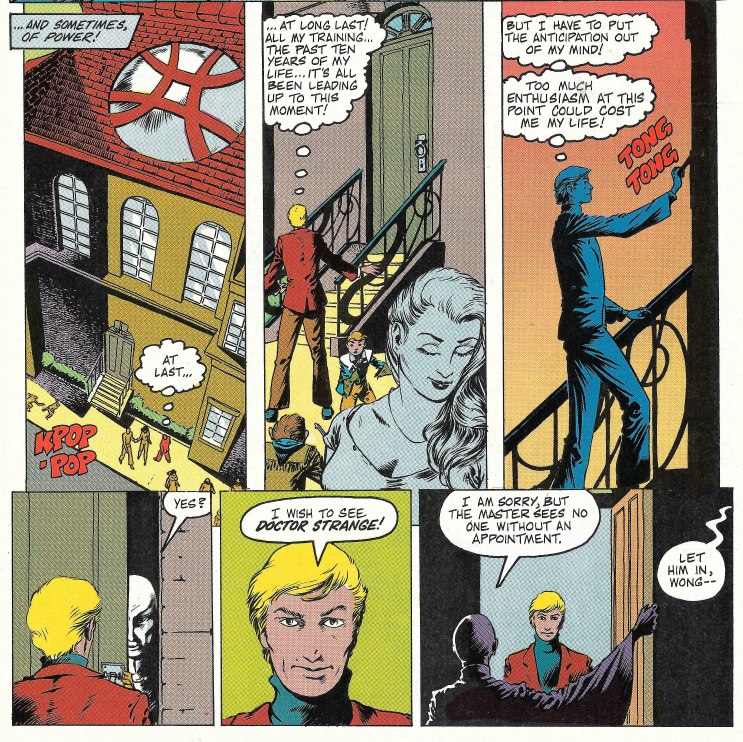 But this slip of a youth is, as with everything in Doctor Strange's universe, not what he appears. Not that any of this takes Doc Strange by surprise. 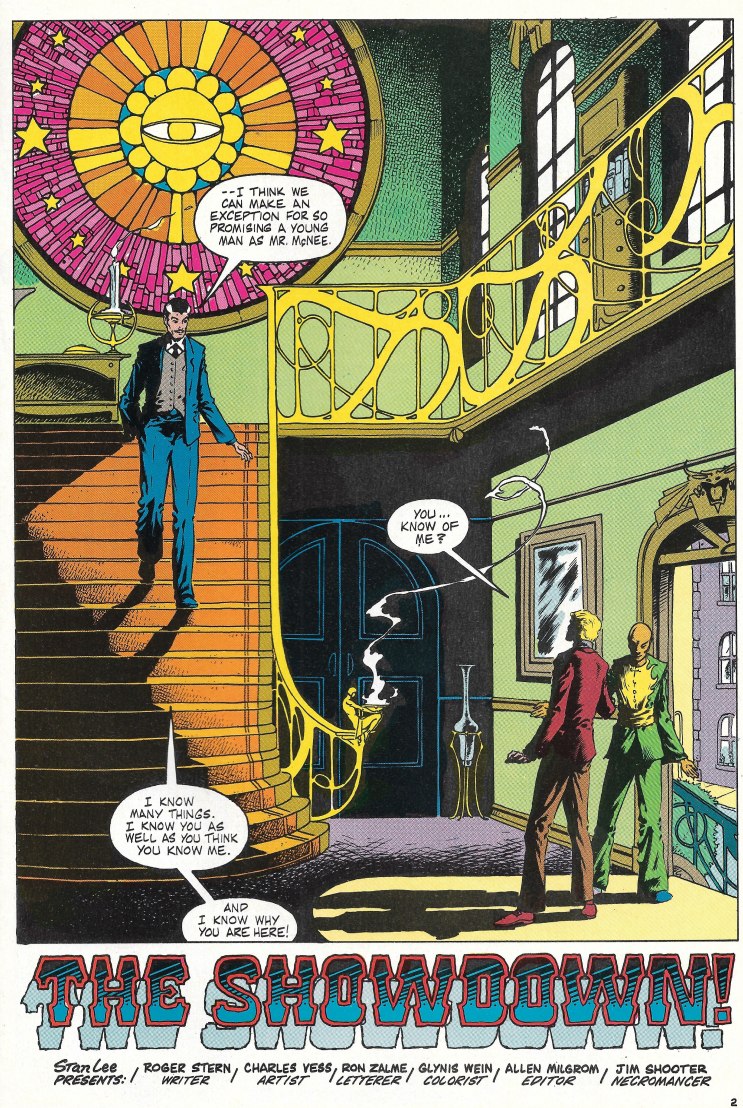 For it appears Mr. McNee is a sorcerer himself. A sorcerer intent on making a name for himself… 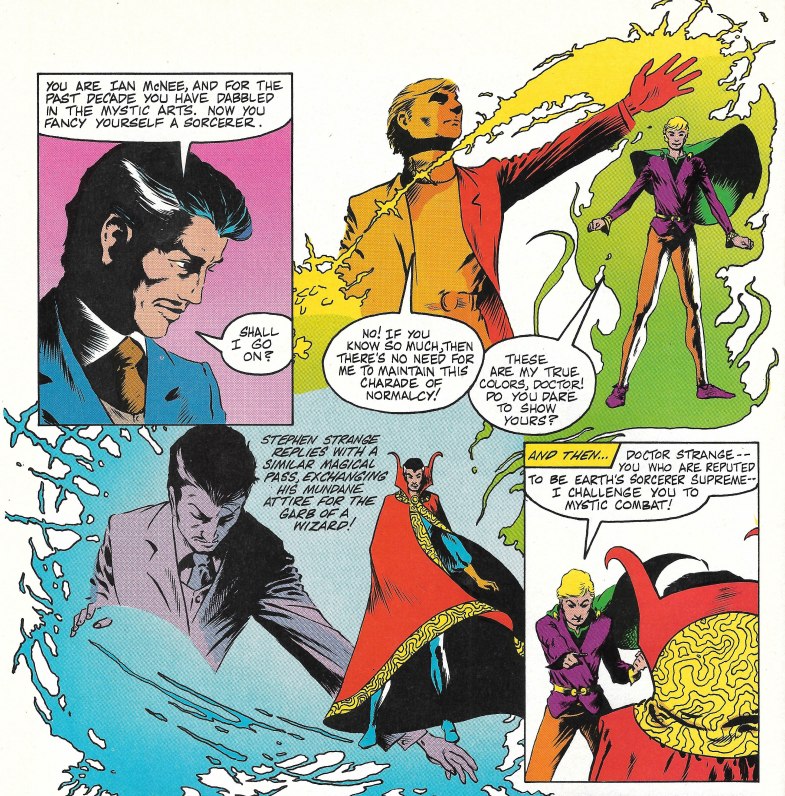 And that name happens to be the title of Sorcerer Supreme, the title currently held by Doctor Strange. He's thrown down the gauntlet.

Doctor Strange accepts and leads him through the Sanctum, which appears to act much like Doctor Who's TARDIS in that it contains more corridors and endless hallways than could possibly exist given its exterior. The reason for the journey through his abode is to get to a room far enough away that their battle will not impact anyone outside. When Strange finally picks the door, McNee hesitates. 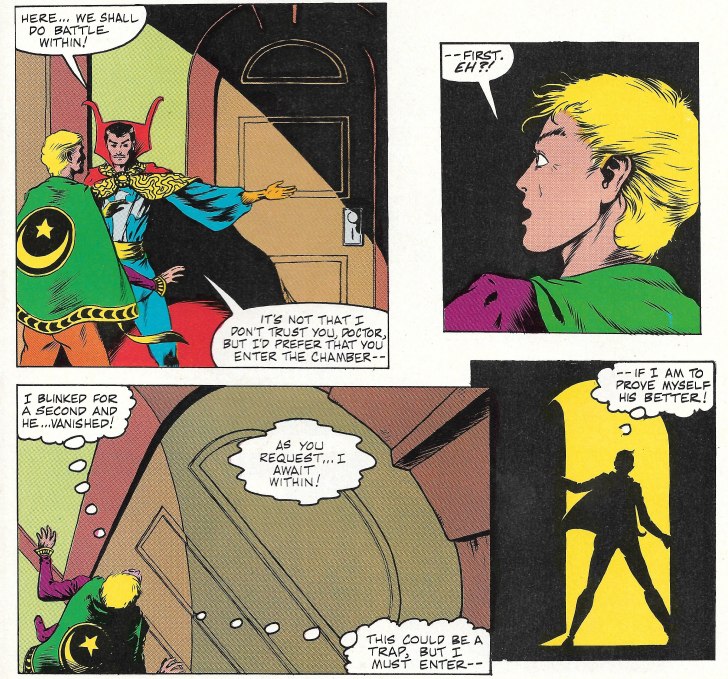 Those of you who are fans of Westerns, see the story archetype at work here. However, how it plays out here would never work in a Western. McNee enters the battlefield. 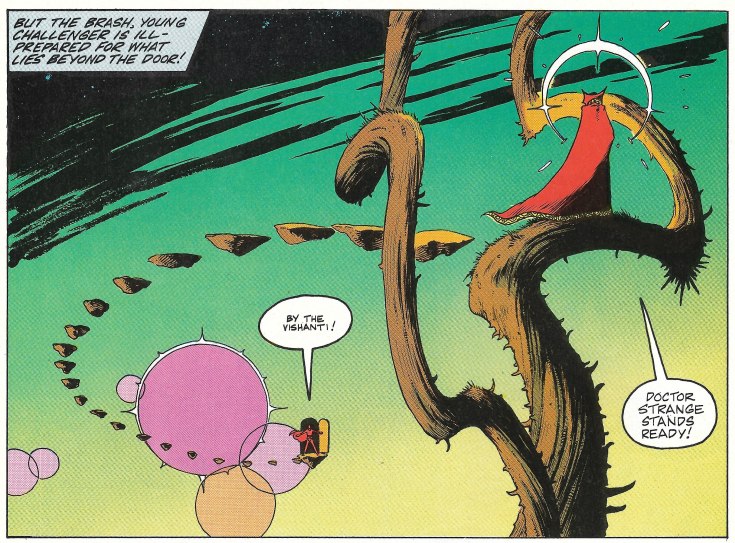 They join in mystical combat. 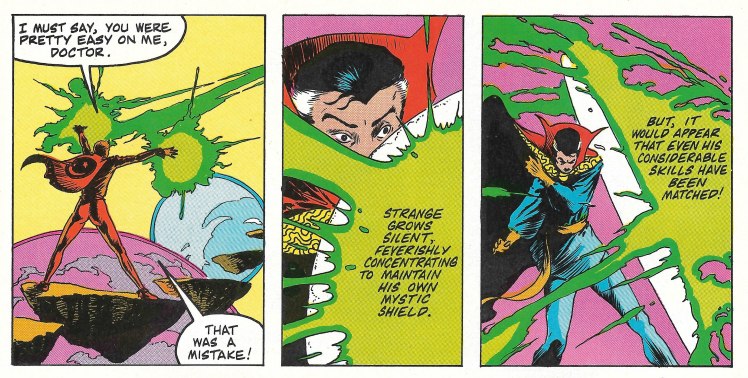 And in a surprising move, Doctor Strange is defeated which leaves McNee the new Sorcerer Supreme. 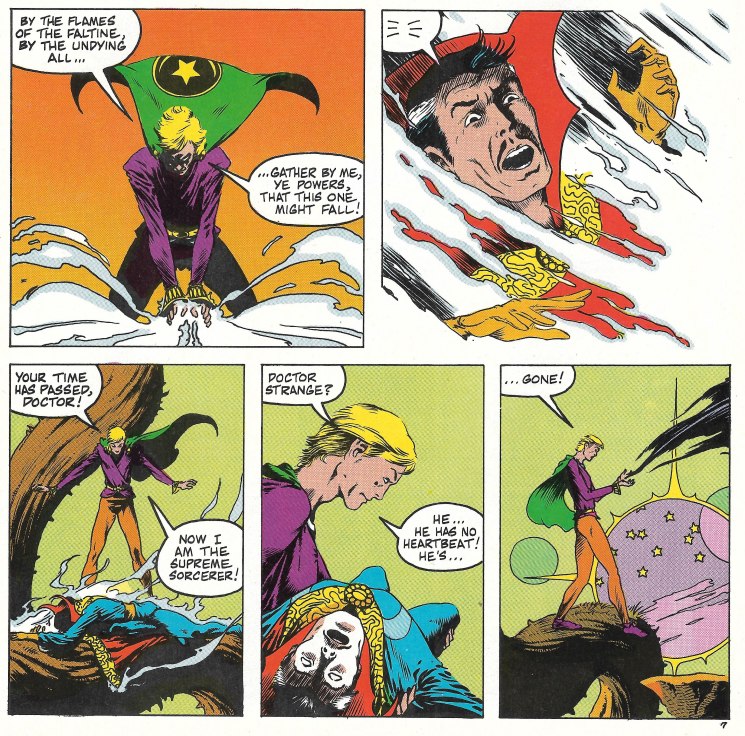 Something that doesn't escape the notice of one of Doc Strange's other rivals. Without further warning, McNee is under attack for his newfound position. 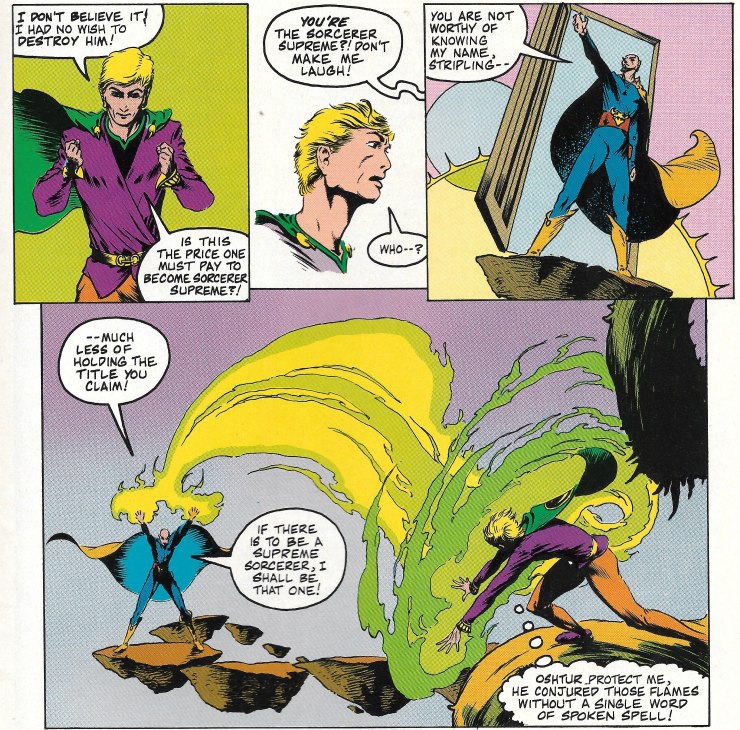 And when that enemy lies defeated… 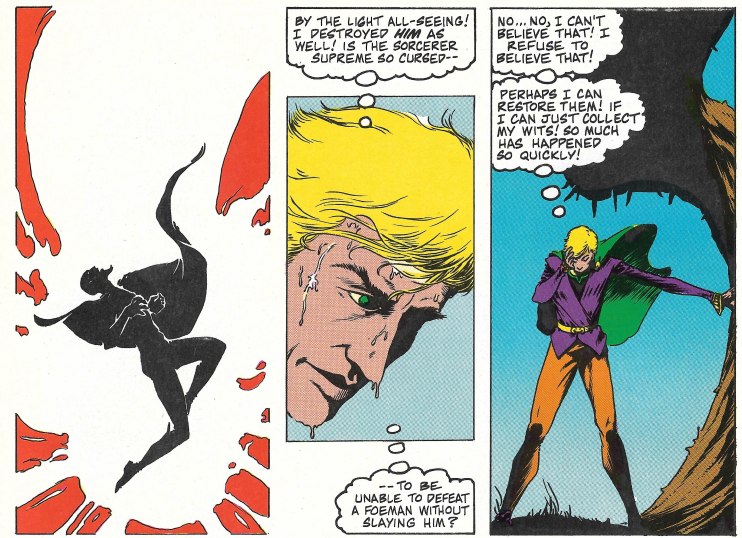 He is assailed again… 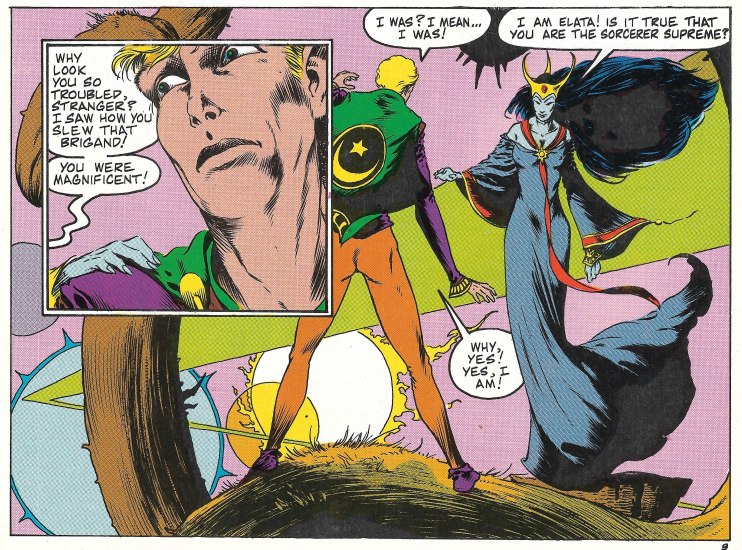 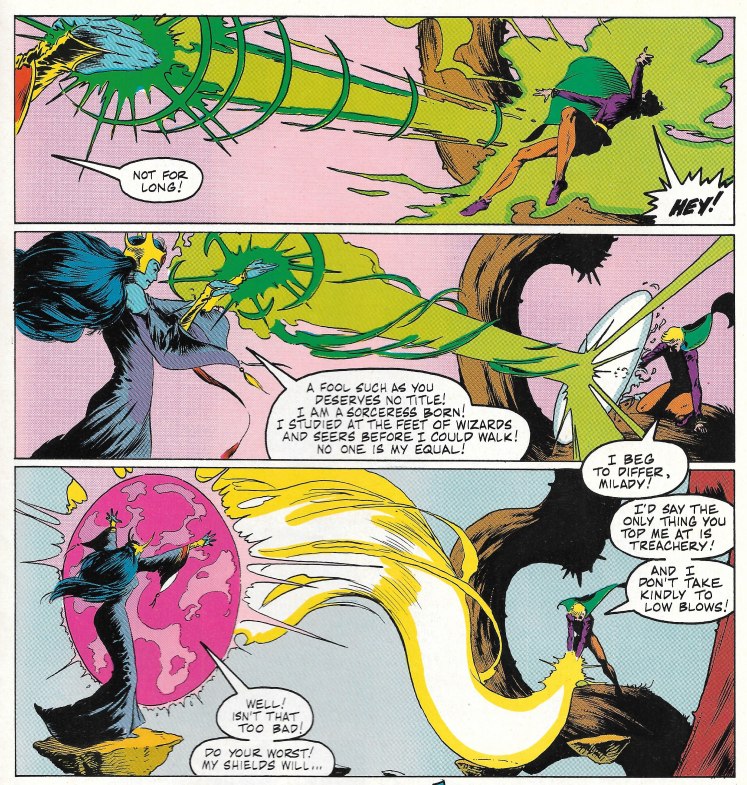 …in a never-ending battle for the mantle he wears, each defeated foe vanishing to be replaced by another. 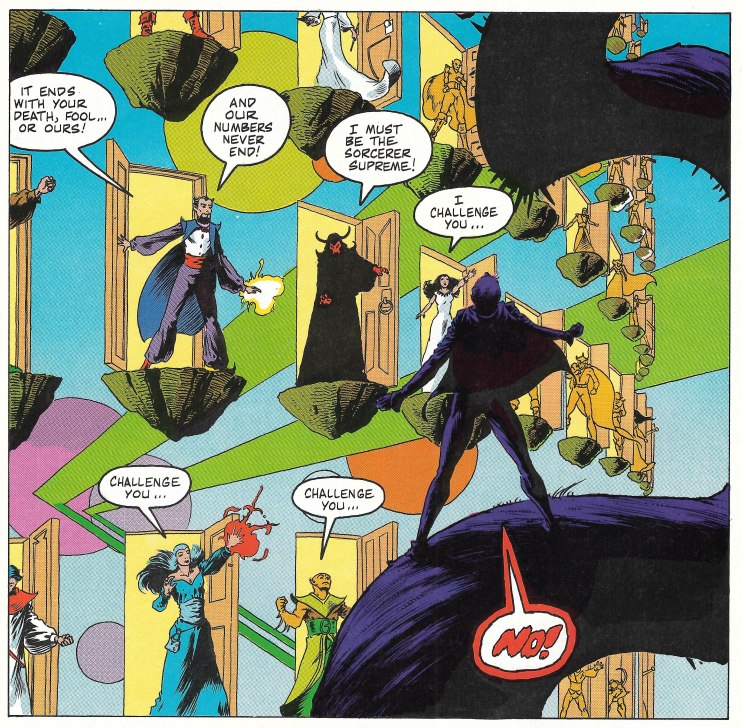 Of course this is all just an illusion created by Doctor Strange who is still very much alive. 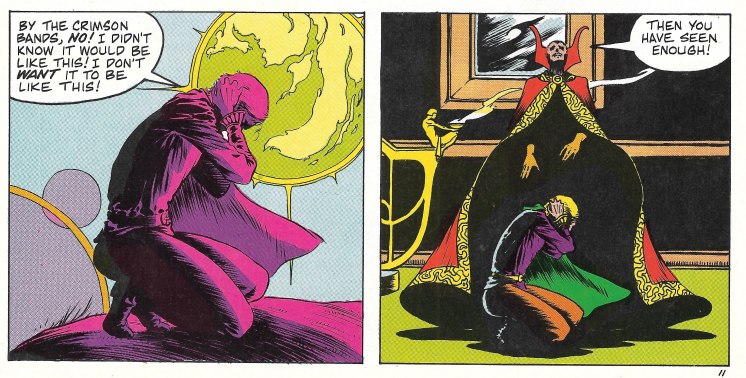 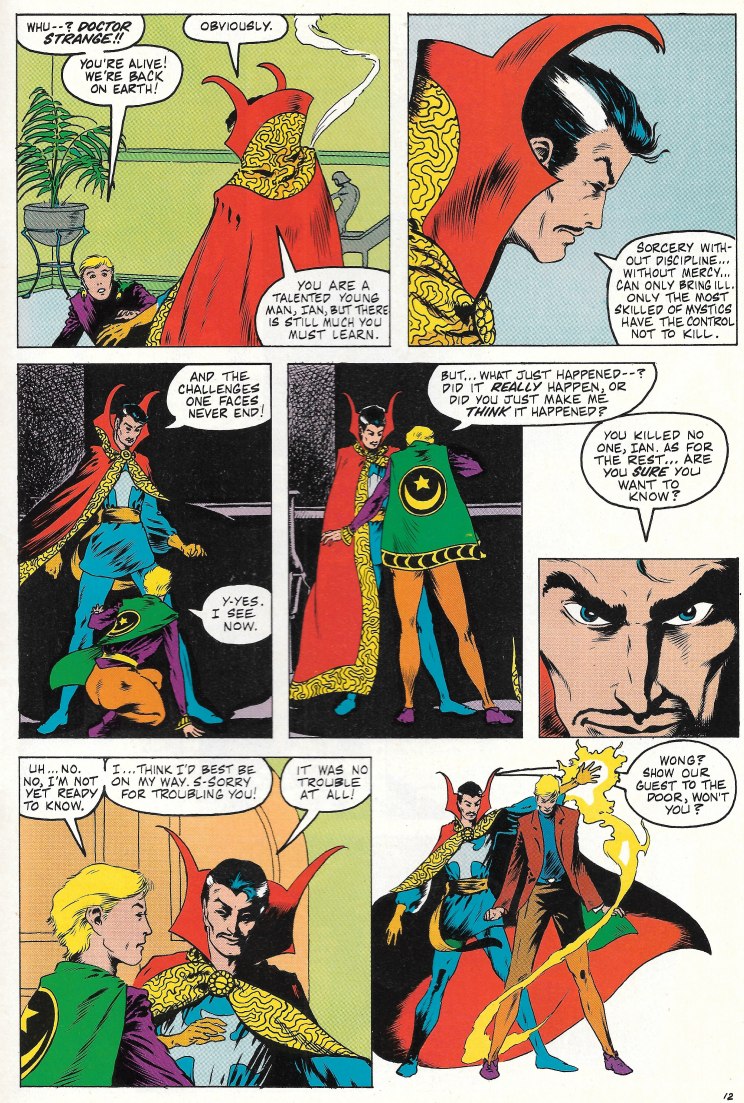 It's important to remember going forward how Stephen Strange became Sorcerer Supreme. That is wasn't something he sought, in fact what he was seeking was just as selfish as the title young McNee sought just now. However Strange gave up that desire in order to serve the Ancient One, subverting his own desires in an effort to save the older teacher's life. Now Stephen has become the teacher and McNee has learned a lesson.

Stern kind of rubs it in here. 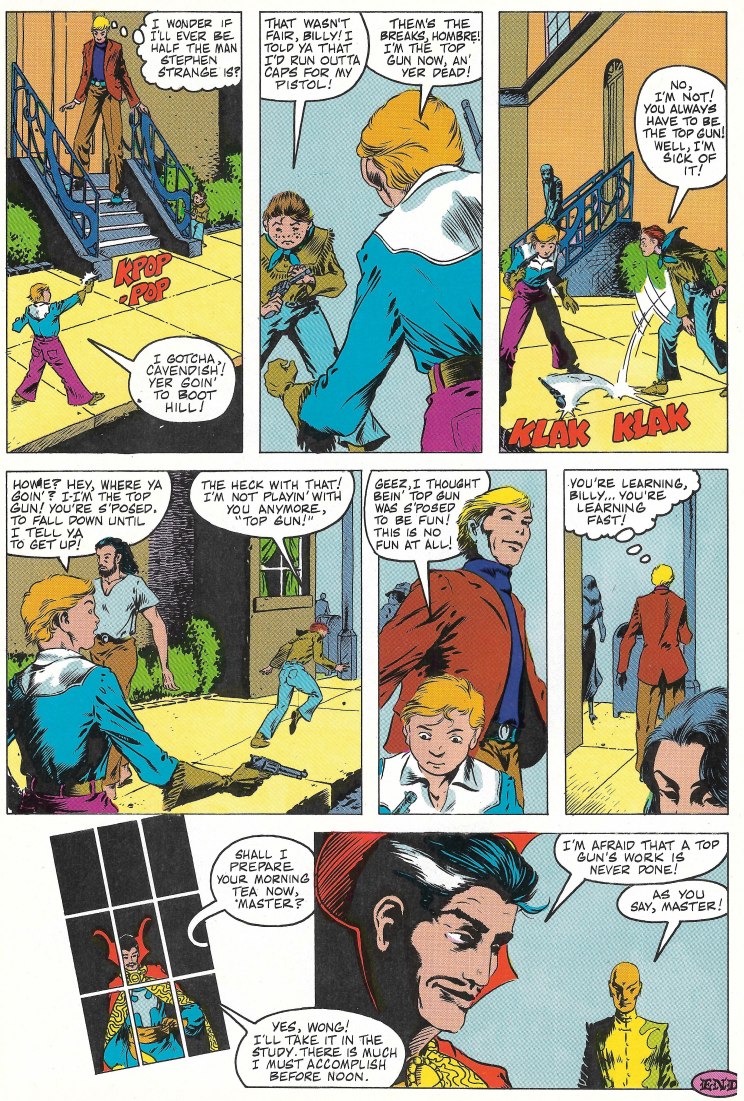 In all a great issue though and a great place to start our journey exploring who is Doctor Strange.

Posted by SonOfCthulhu at 2:02 AM