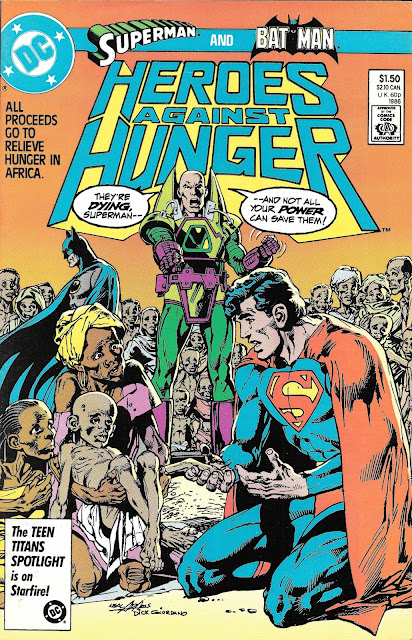 Part 1 of this interesting experiment on famine relief in Africa provides a mediocre story that ends up less than the sum of its parts.

Given this will drop right before the week of Thanksgiving here in the United States, I thought it only fair to serve up a bit of what we have to be thankful for in the form of some old-fashioned charity books.

We are going in reverse order here. Heroes Against Hunger came about after Marvel's Africa fundraising book Heroes for Hope: X-Men, but existed for pretty much the same purpose. A gathering of DC's greatest writers, artists, inkers, letters, and colorists assembled (Assembled? Can I say that with DC?) to produce this amazing book. Even though the cover price was more than twice that of other books in 1986, there were no ads to distract from the amount of talent it contained.

Sadly, it is astonishing for a comic fan yet ultimately disappointing as a comic reader.

The book showcases every talent here, yet the storyline itself is bland and ends rather depressingly. We get this is about how food shortages are a problem that has to be solved in the real world, but the writers end on such a bleak note. Too bleak, in my opinion. It is a trip worth taking though, as the contrasting styles of art and writing are so much fun to behold.

I put up there that this book has "everybody" in it, and I don't want you to think I was lying. Here is the frontispiece to the book: a brief matrix of who was responsible for which pages. Using this as our concordance, I plan on walking through the book with you, every single page, because it really is something special that has to be seen in its entirety. 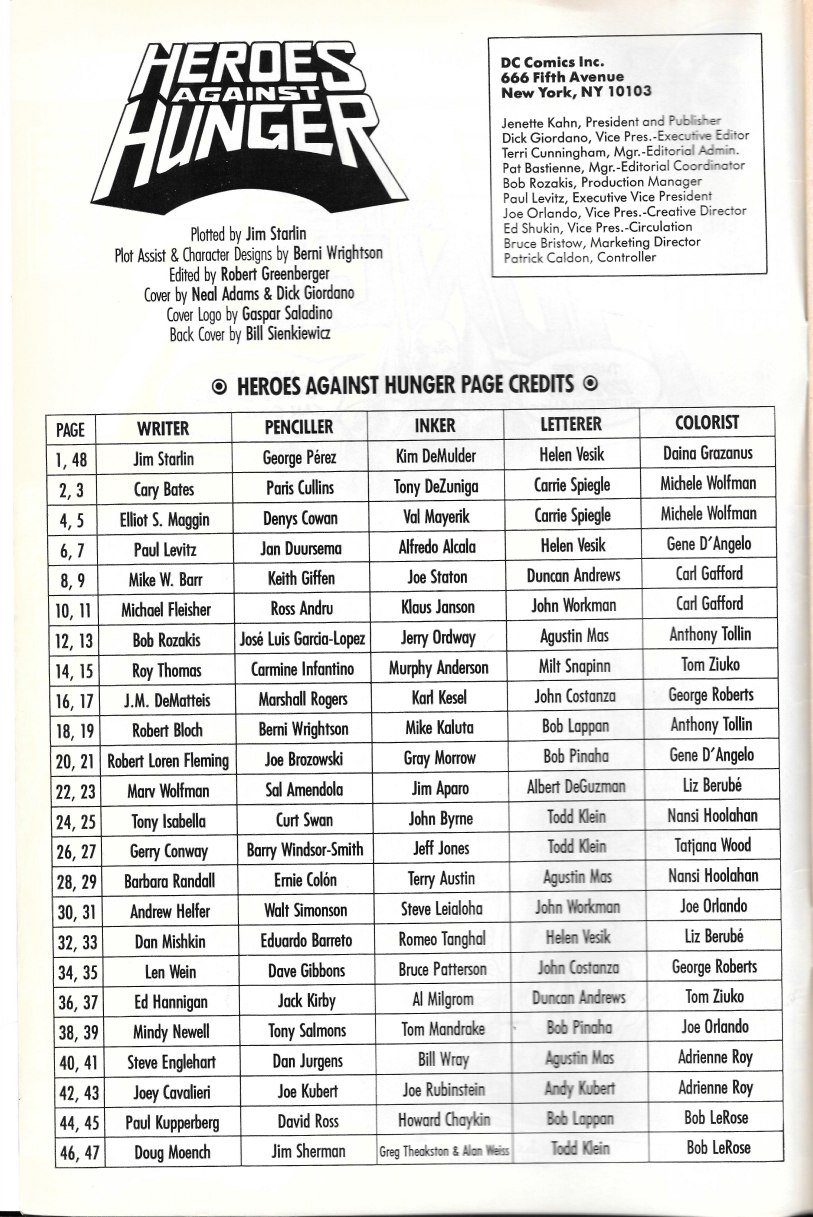 We should probably start with Neal Adam and Dick Giordano's wonderful cover, great art with blubs harkening back to the days of the Silver Age stories just slightly before my time. Adam's Batman never looked better and Giordano's inks emphasize the plight of these famine stricken families. The cover sells a book that will hit the standard superhero tropes, but also deal with a real world problem.

From there we move on to the first page of the story, with Superman flying above the African desert. This is probably Ethiopia, but the story never states an exact African country. Starlin covers the dialogue and his ominous ending text box foreshadows the heroes defeat. Perez is doing the pencils, and even though DeMulder's inks don't detract, it is a missed opportunity to give him just a solitary figure for this splash page. Perez excels at making busy panels look understandable, so not including him in the later fight scenes feels wrong somehow. 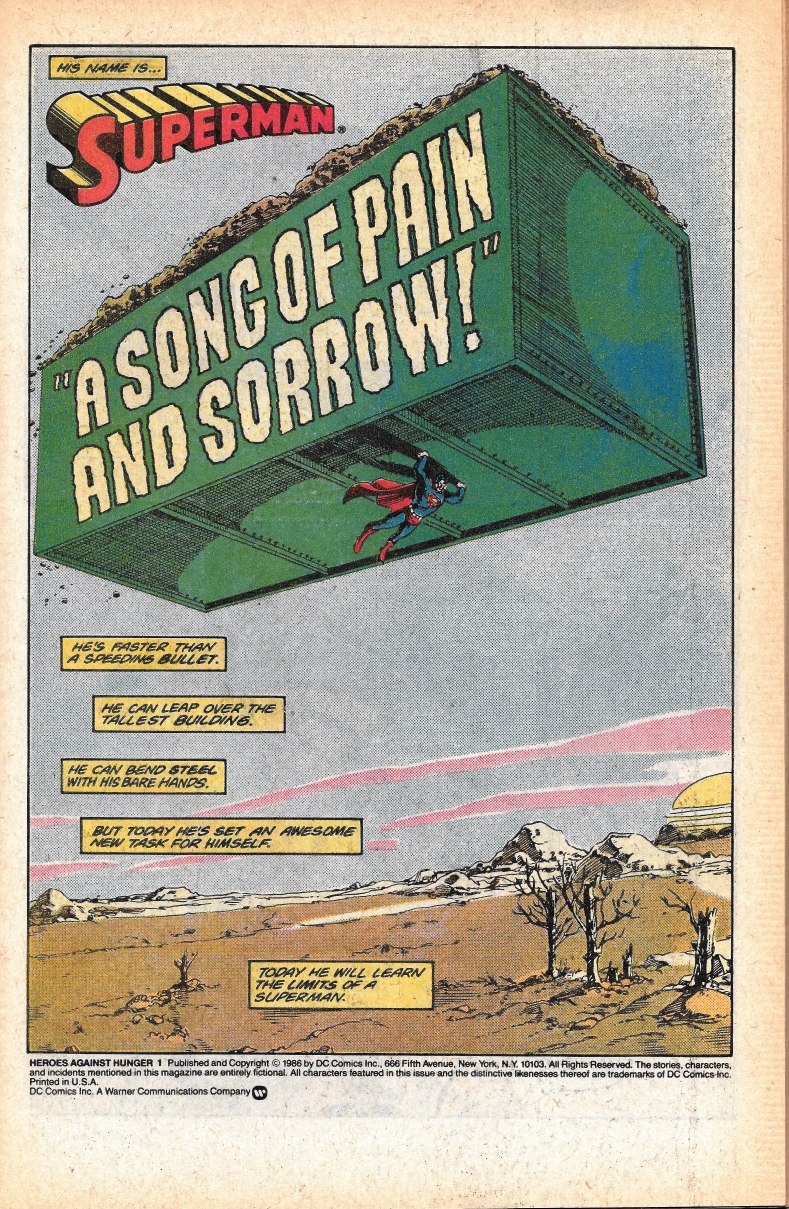 Paris Cullins turns in the next two pages with inking by DeZuniga and I'm struck by those "in motion" moments that we would see in comics from this era that now are deemed hokey. Loved these. Bates utilizes a newscaster as his exposition mouthpiece, but it's done in an even manner. And a common theme crops up: one man isn't powerful enough to solve this crisis. Even a "super" man. 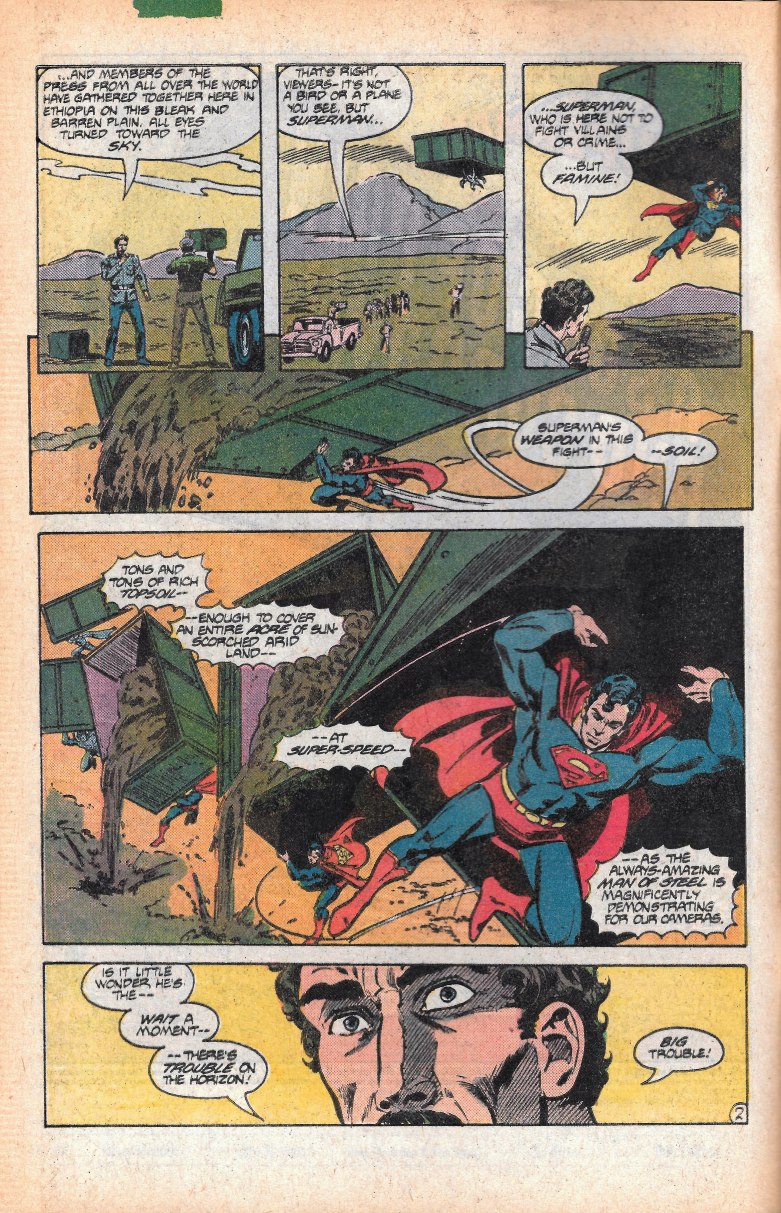 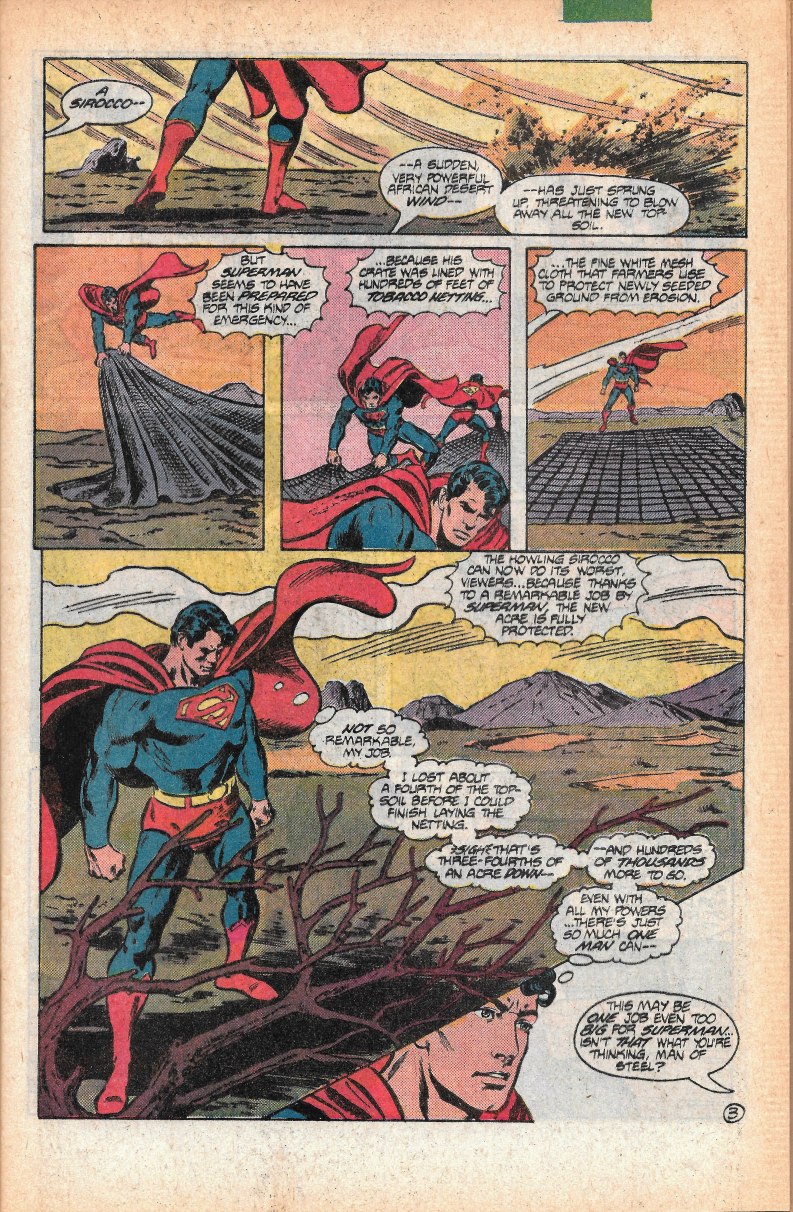 We move to the next page where Elliot S. Maggin introduces yet another "character". I say that in quotes as again it appears this a cardboard stand-in that exists solely to spout exposition, this time questioning any solution to the crisis. It is an odd thing to have the Peace Corp telling Superman off. I mean, any assistance at his level is better than none, right? More thoughts on that later. Denys Cowan and Val Mayerik do the art chores, leading the book to experience the very first of many sharp tonal shifts in artwork. 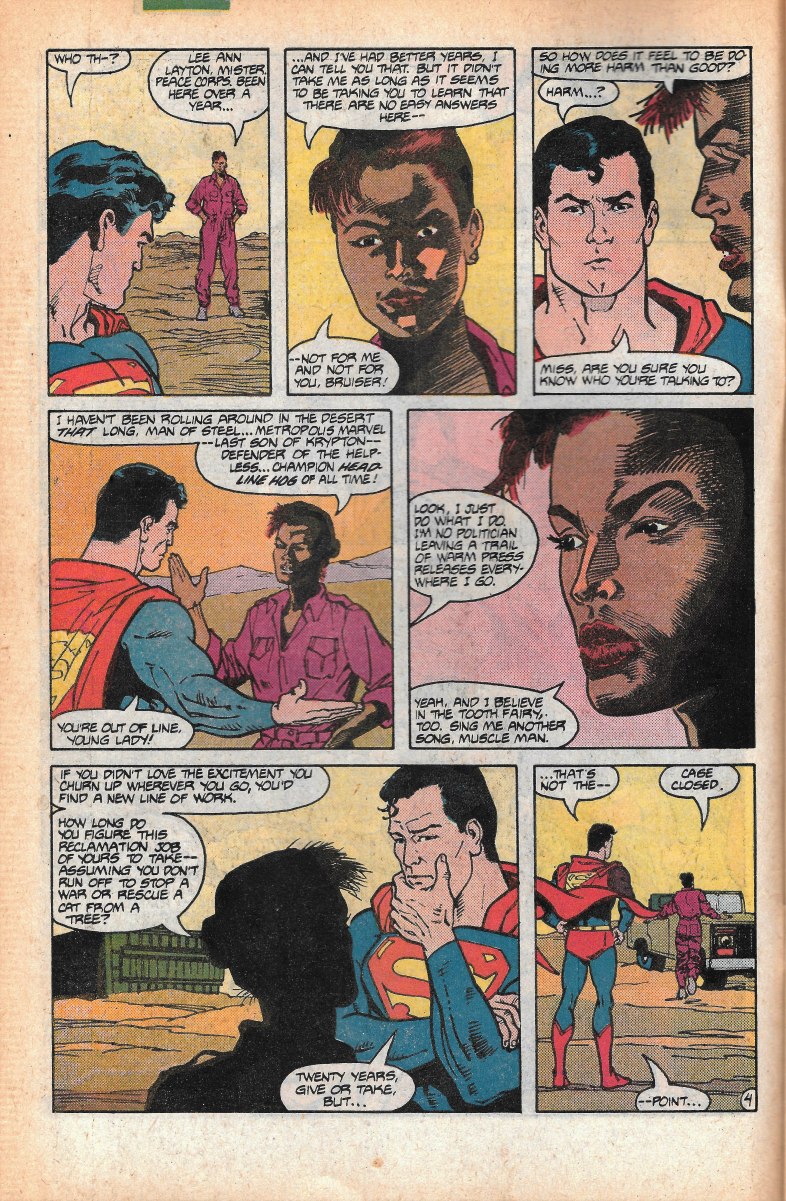 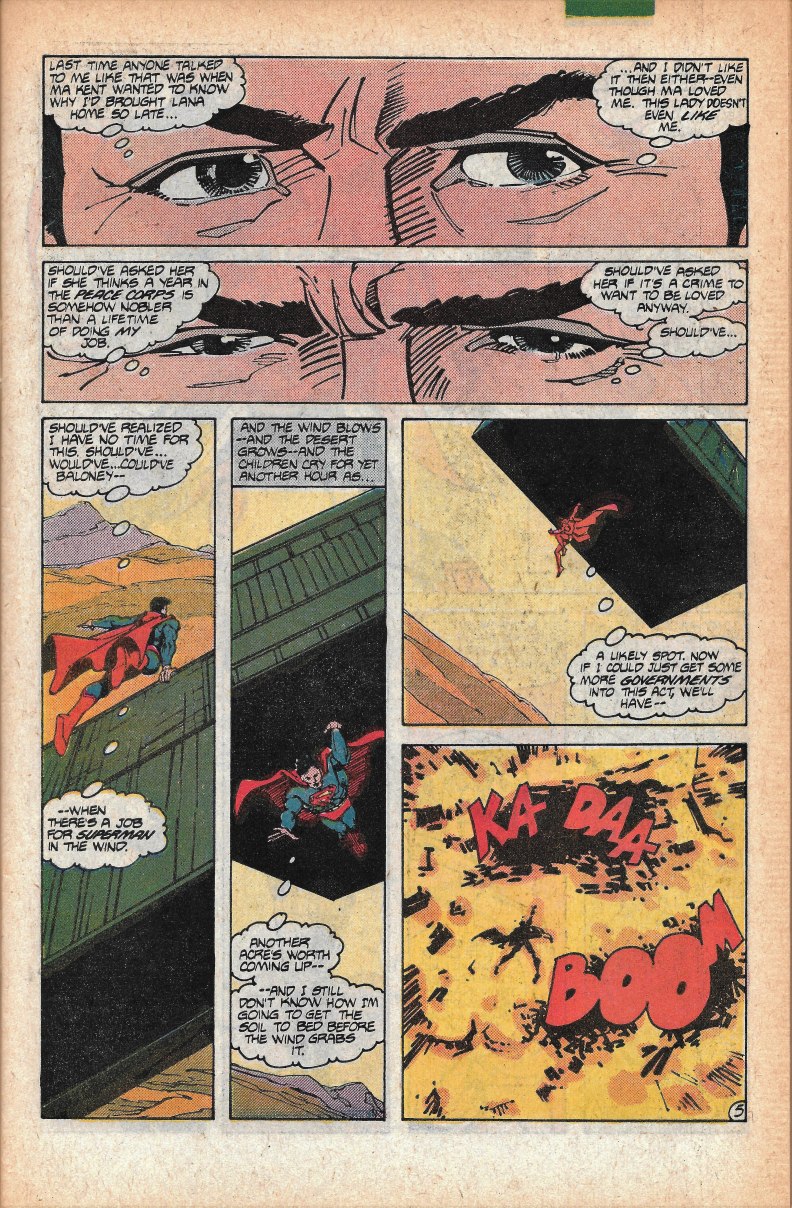 And here we have a shift in story as Paul Levitz finds a way to shoehorn Batman into this with the mystery of six planeloads of food having been shot down. Jan Duursema and Alfreado Alcala proved two pages of really great art. I've not been complementary of Duursema's art in the past, but I'm going to lay that off on pairing her with an incompatible inker. I love her Superman/Batman panels. Unfortunately there is yet another "person" who is involved only to fade into the background as quickly as they appeared. 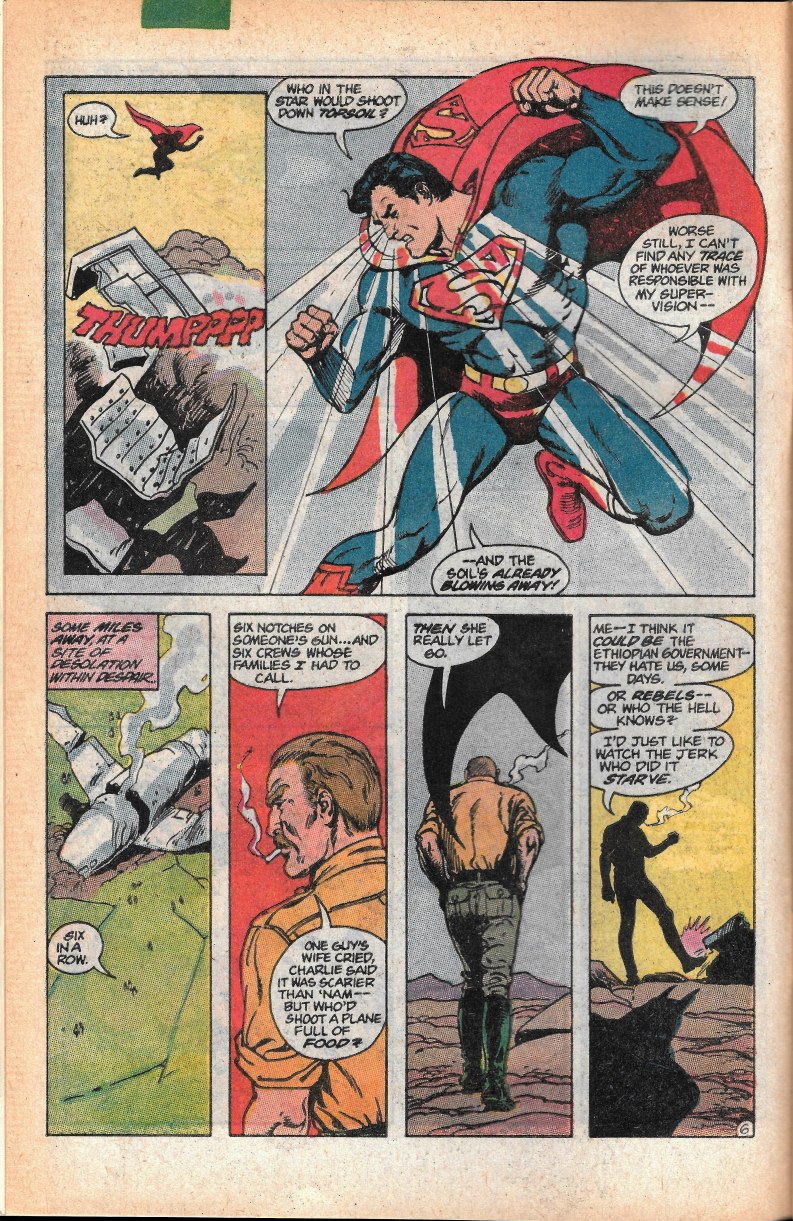 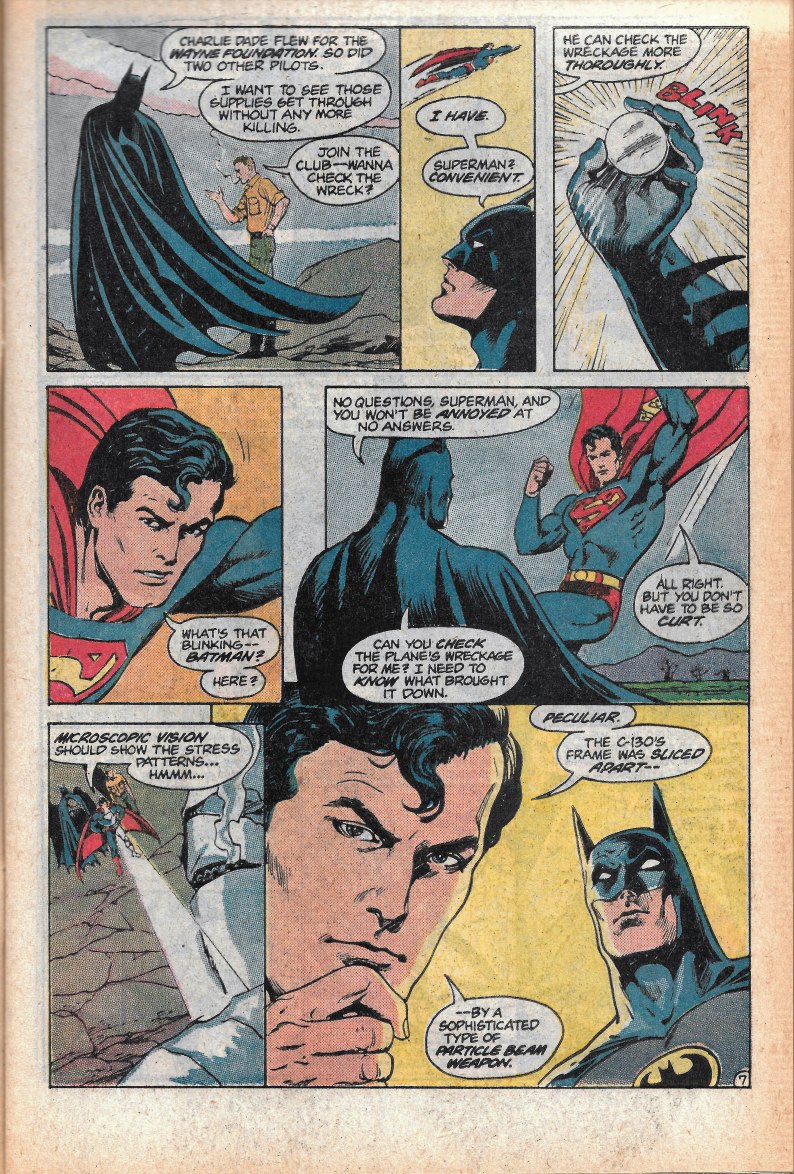 Suddenly: BANG! Joe Staton inking Keith Giffen's pencils. Talk about a jarring change. Before we just had heavy shading, but this is full on boarder-meets-boarder Giffen with lots of close-up angles and blackness. Story chores get picked up by Mike W. Barr who does the ole "bickering friends" cha-cha before introducing Luthor as a known heavy. The dialogue shift is noticeable, making these two pages appear the ones most likely to have been inserted from another magazine. The sum of these two pages is to split our pair up, which seems a bit silly when they just joined forces. 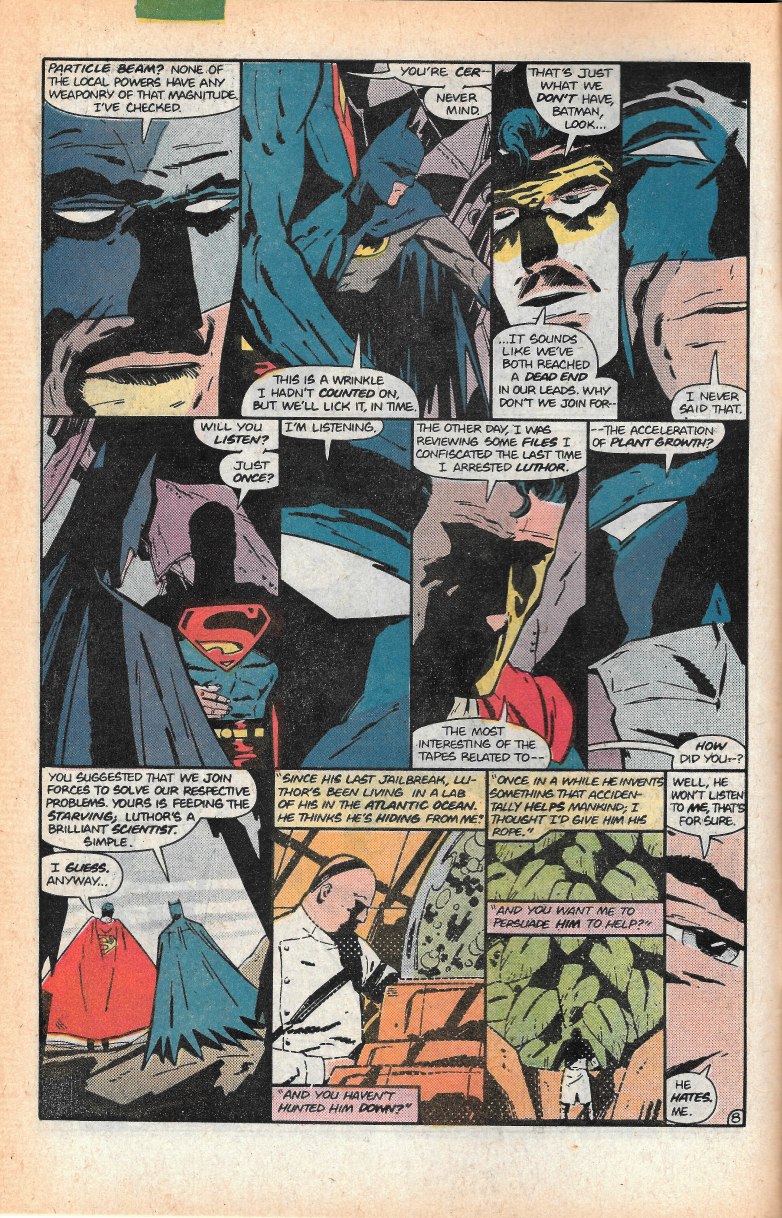 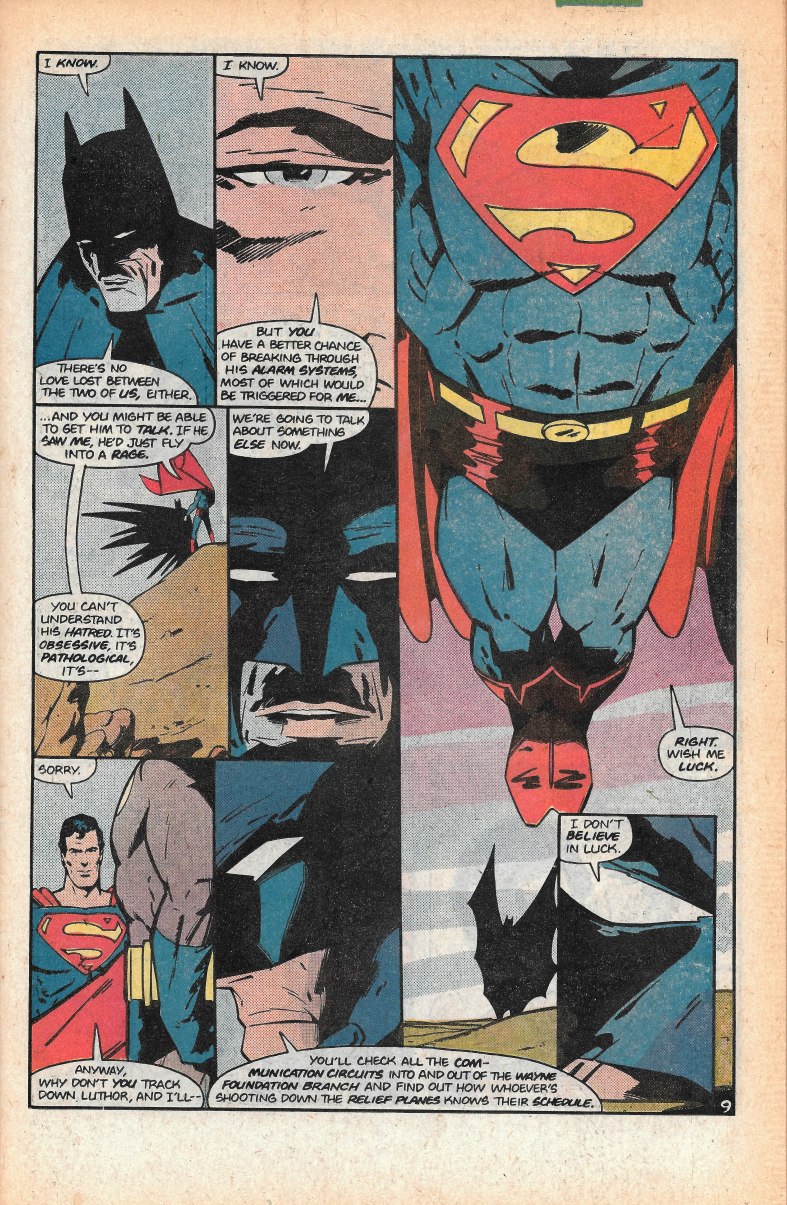 Next up we shift way back to Ross Andru looking very old-school even with Klaus Janson's grim and gritty inking style. I've always loved his shading technique, but seeing him over Andru's very open pencils is a trip where you can't tell if it is classic 70's style or very early 80's. As for storylines, Michael Fleisher throws out the common attack of the killer androids scene, with some heat vision melting for good measure. 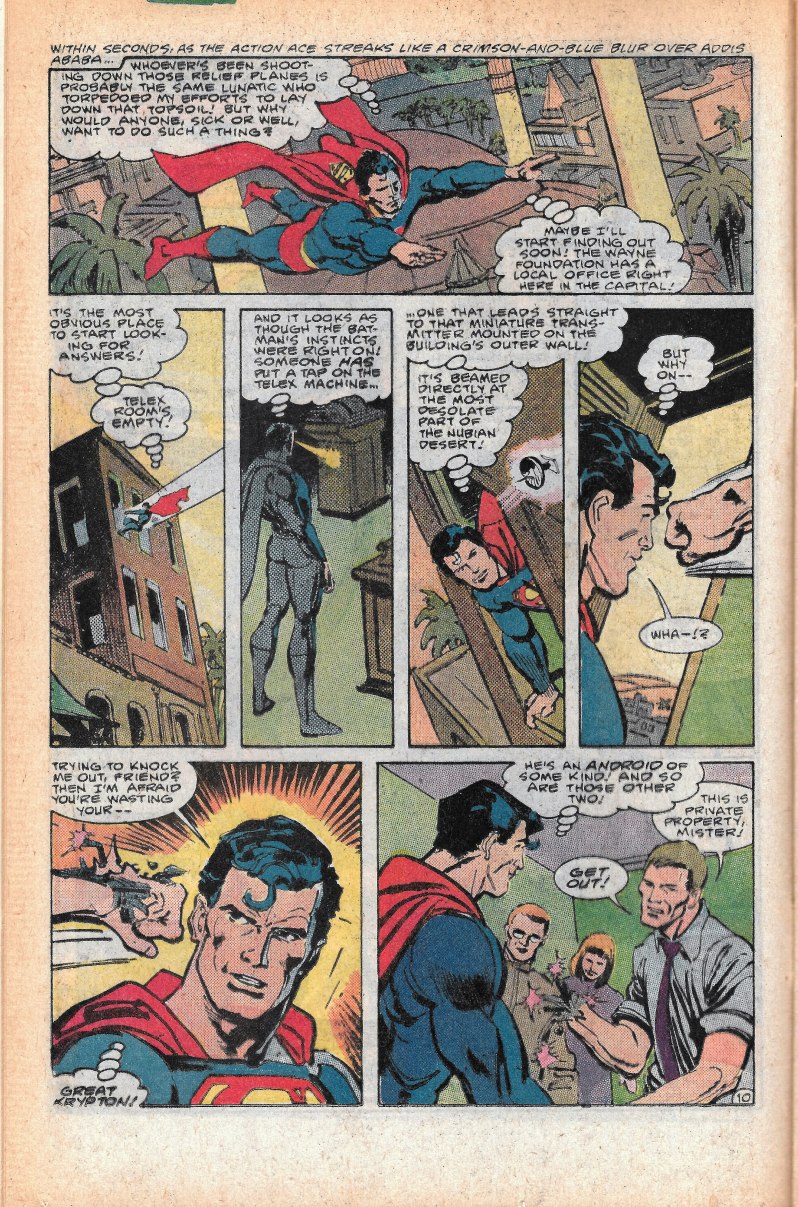 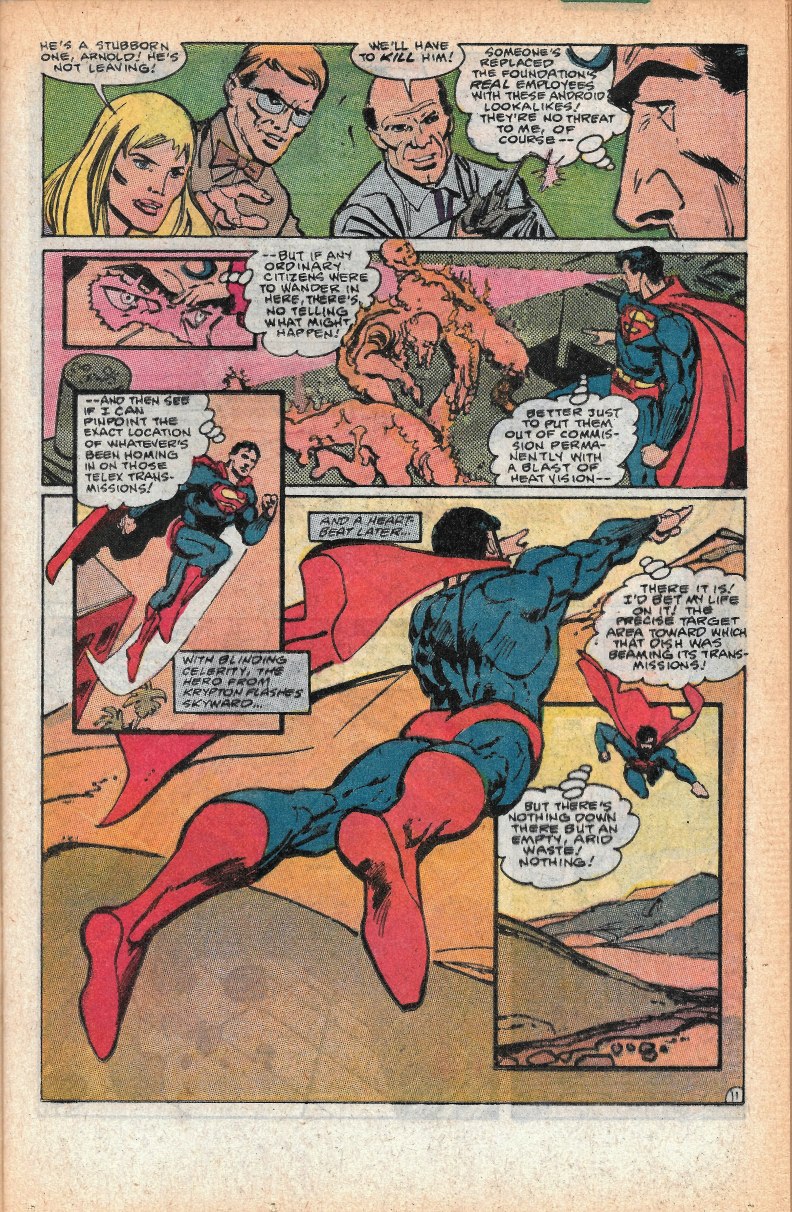 Jose Luis Garcia-Lopez inked by Jerry Ordway comes sliding in next and I get John Byrne Heebee-Jeebees even though he isn't on as anything until later. Bob Razakis throws in an alien robot called The Master to both create some fight scenes and to serve as our primary menace. But before we get to those fight scenes... 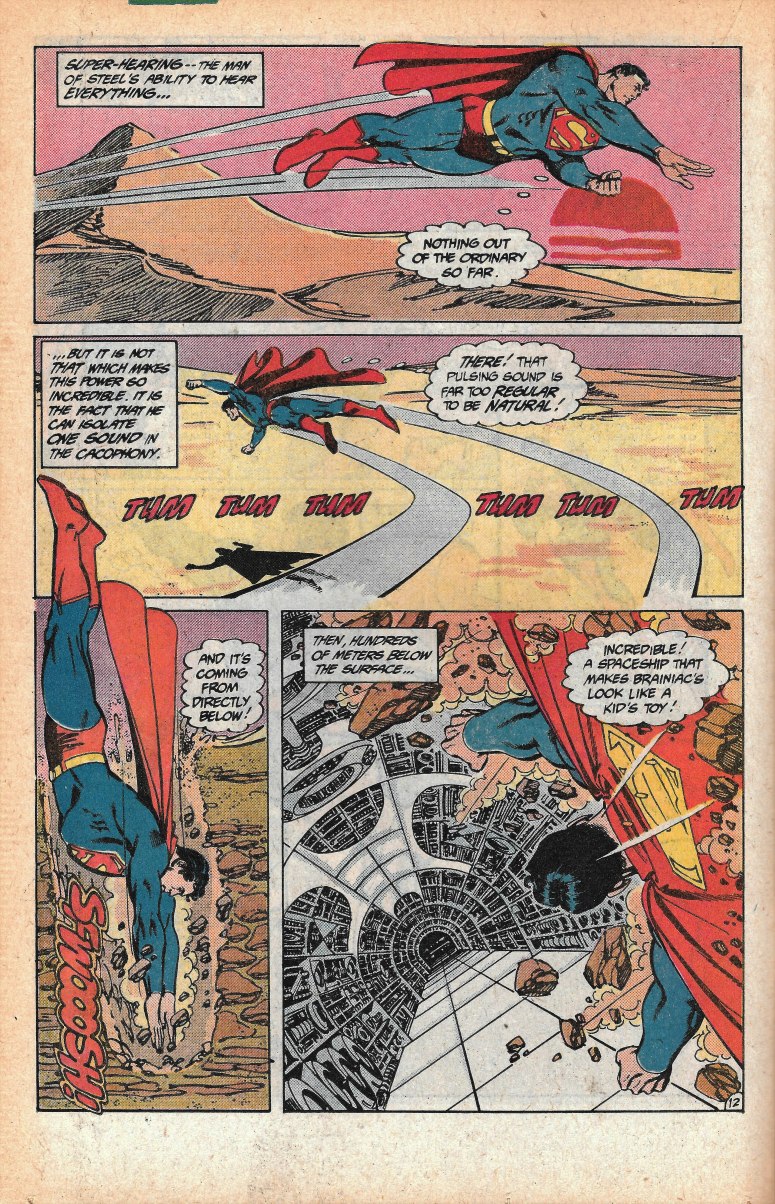 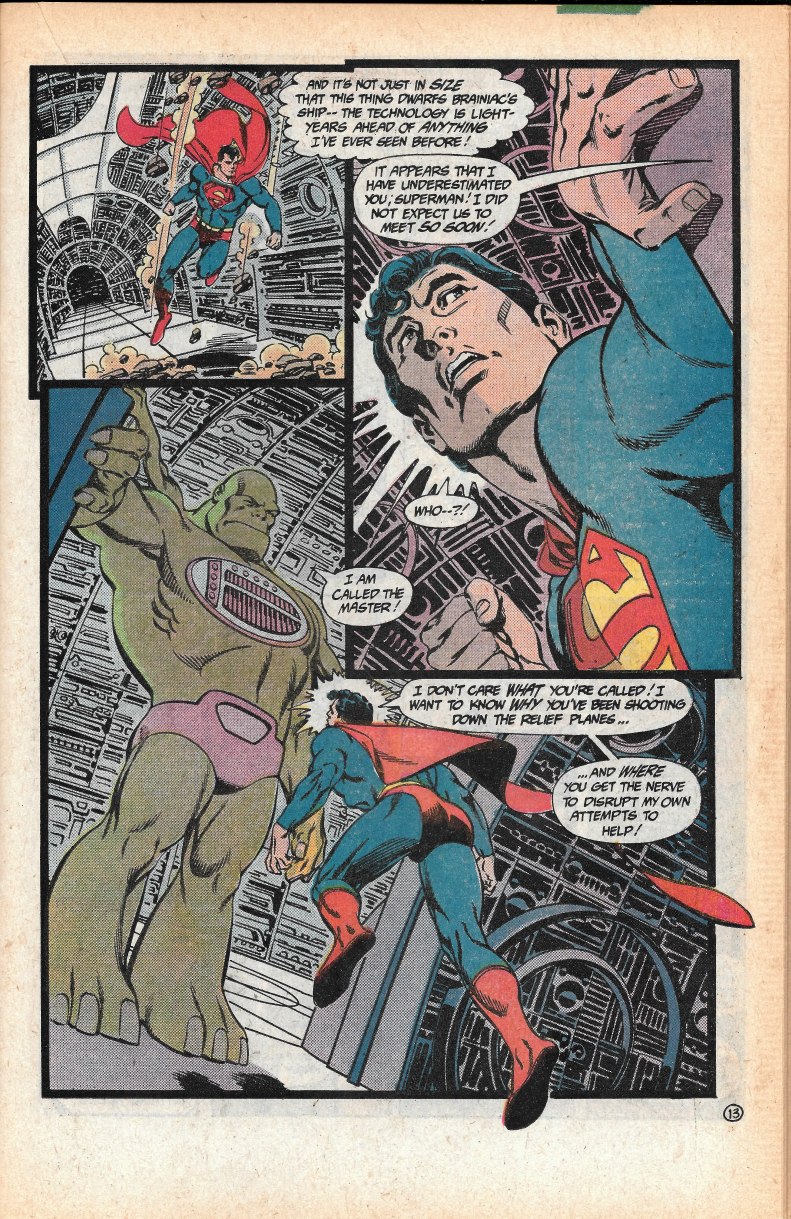 Roy Thomas fleshes out our bad guy's motivations and then sets the marvelous Carmine Infantino being embellished by Murphy Anderson loose on providing a mummy of metal for the man of tomorrow. This part gives me hope the book could suddenly rise to being grand entertainment. Prior pages were a bit…slow. But in the past six, we've gained an enemy, had a couple of action sequences, and developed character motivations. 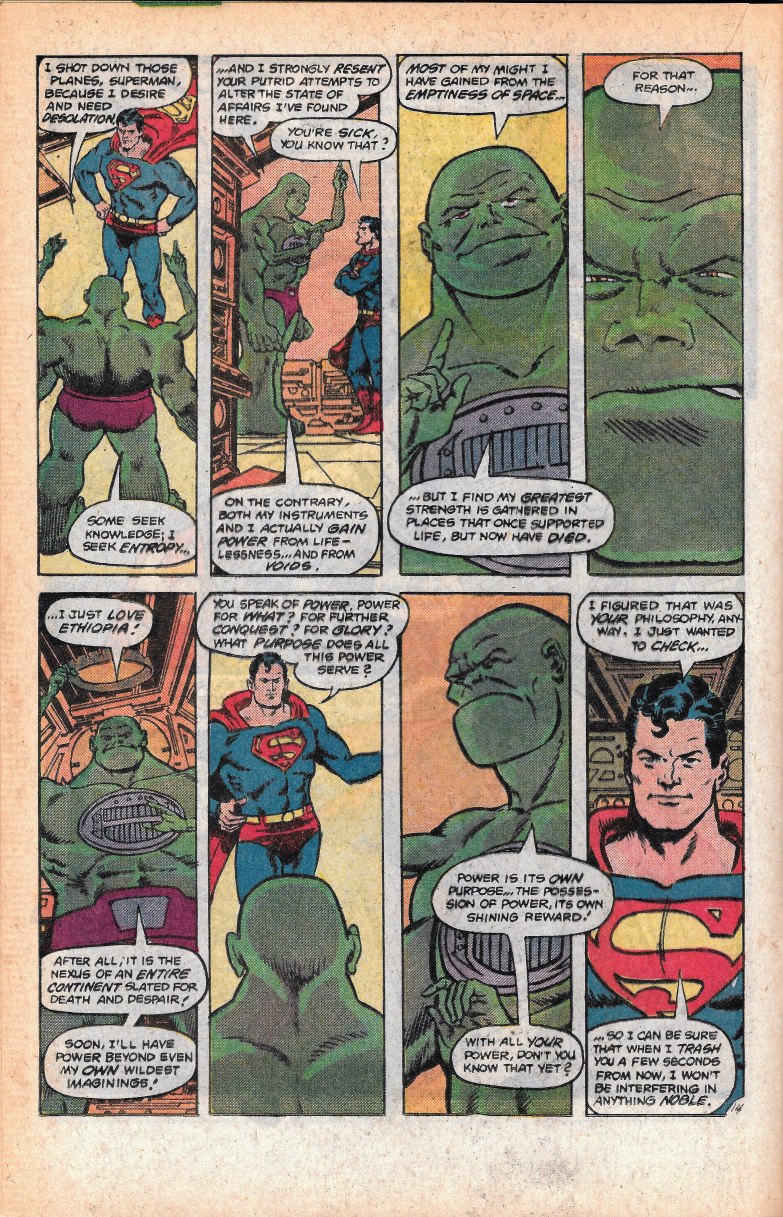 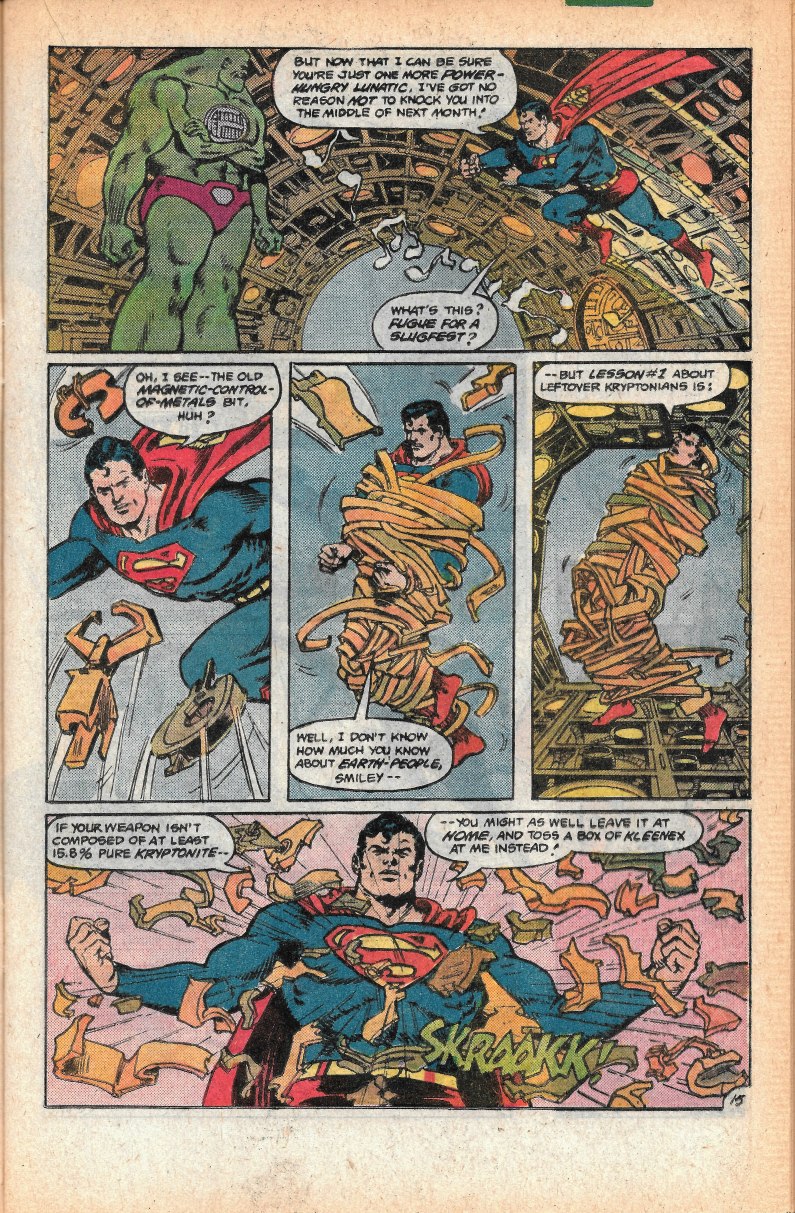 Now we skip over to Batman and continue with the action. J.M. DeMatteis tries to shoot the dark knight detective down with assists from Marshall Rogers on the pencils and Karl Kesel on inks. First a few missiles and then some robots with frick'n lasers on them. But it's Batman, so yah know. It is keeping the story going though. 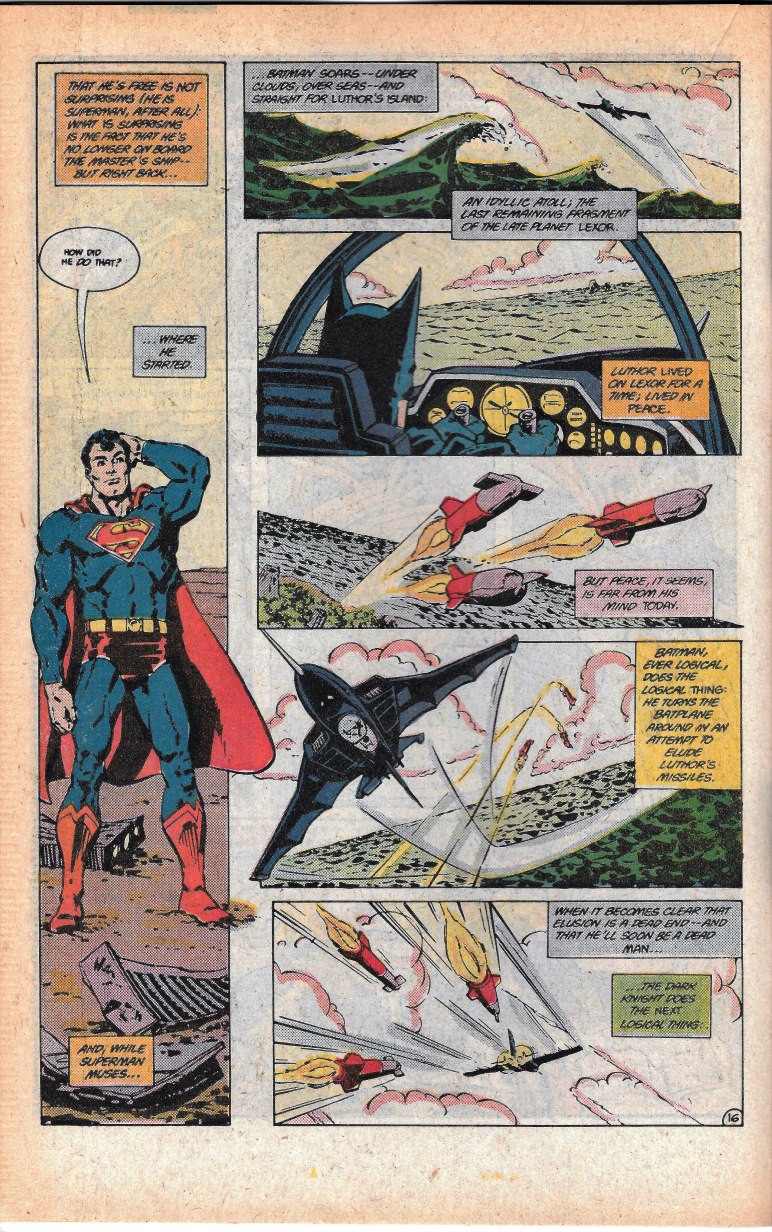 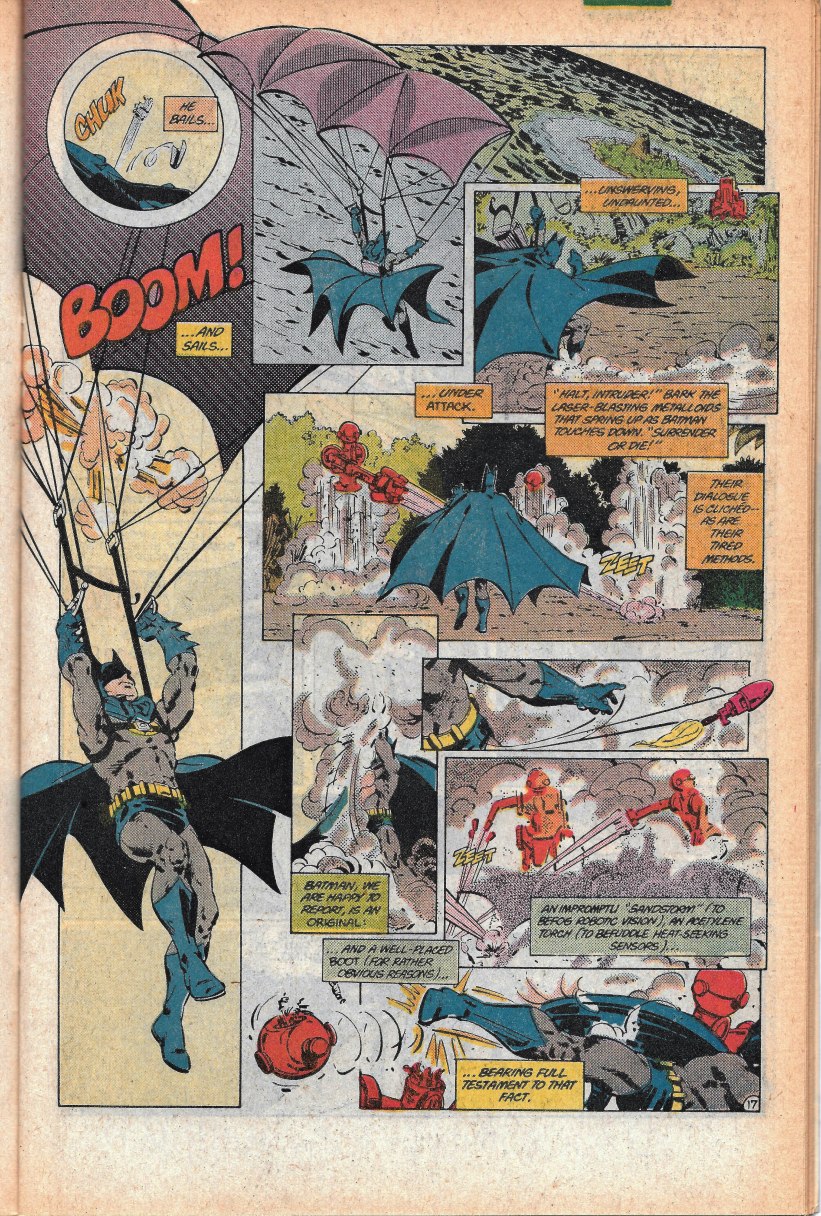 And going it does, in some unconventional hands. Writing the next two is Robert Bloch, HPL alumni and author of Psycho, with art by Berni "Swamp Thing" Wrightson and Mike "House of Mystery/Secrets" Kaluta. Seems a bit of a left turn, but the art is amazing and the story works in context. Batman asking Luthor for help works because Supes cant. 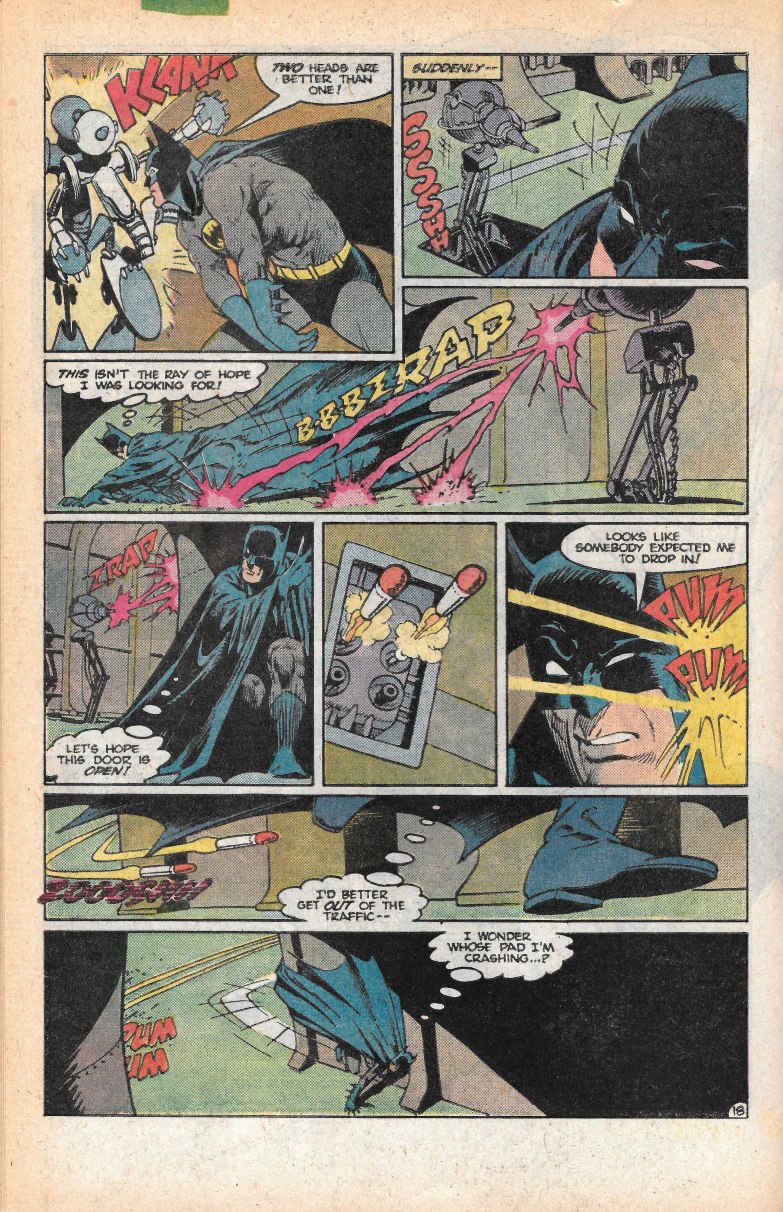 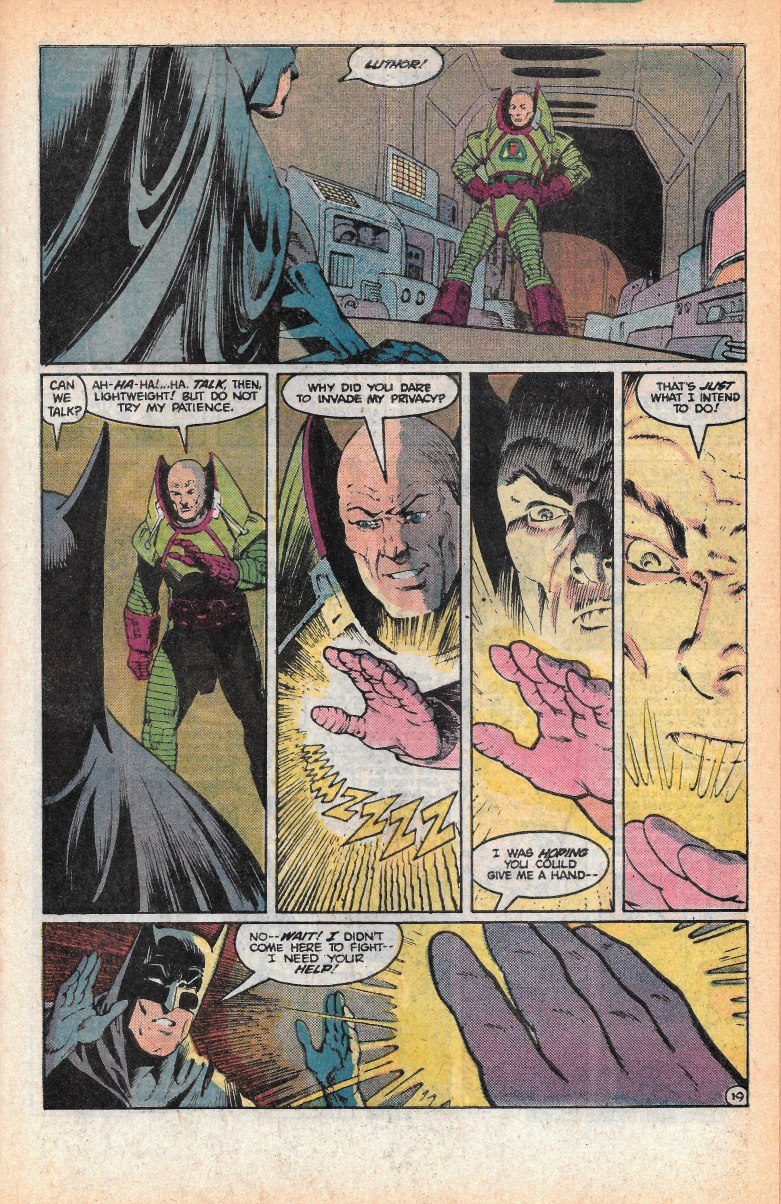 And then we get something out of Batman '66 as Joe Brozowski inked by Gray Morrow throws us a curve ball. I dig the look, but it is another bump in the road, even with Robert Loren Fleming doing a solid on scripting and dialogue. We get Luthor being the loveable egocentric narcissist we've always known him to be with Batman playing him along for all it's worth. 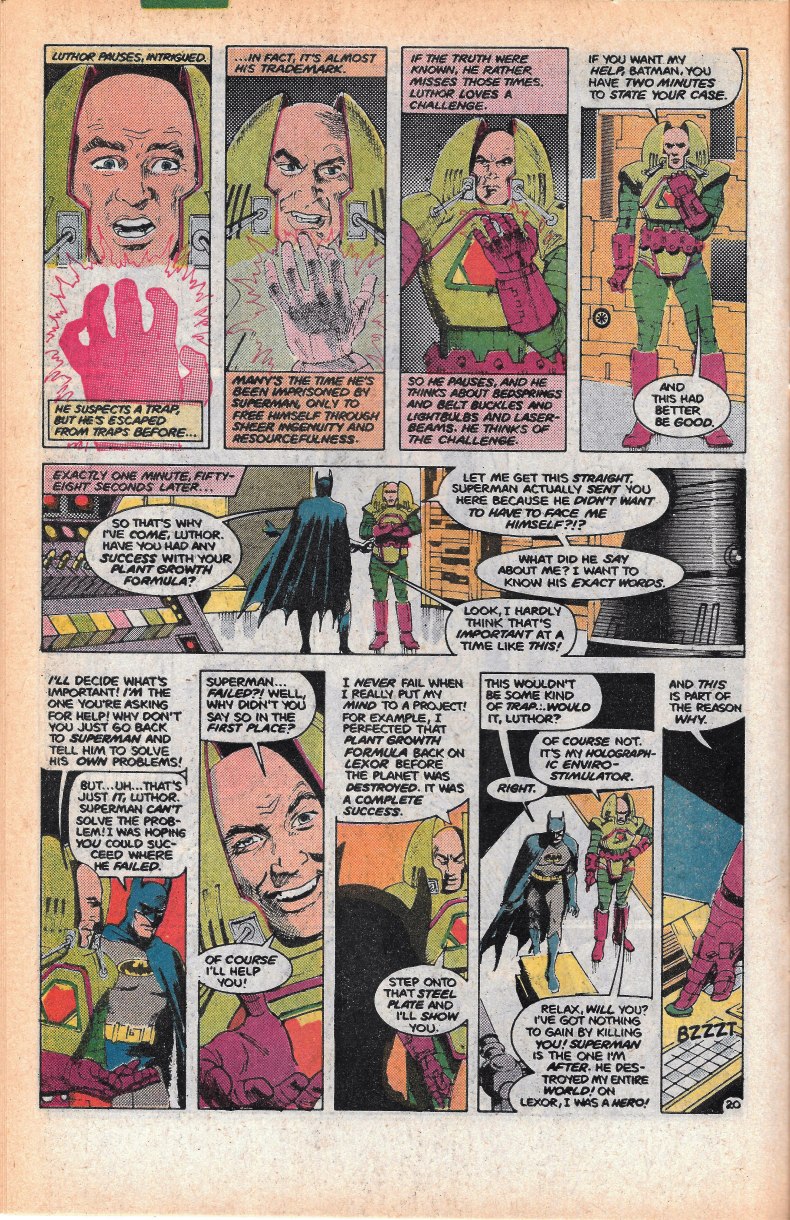 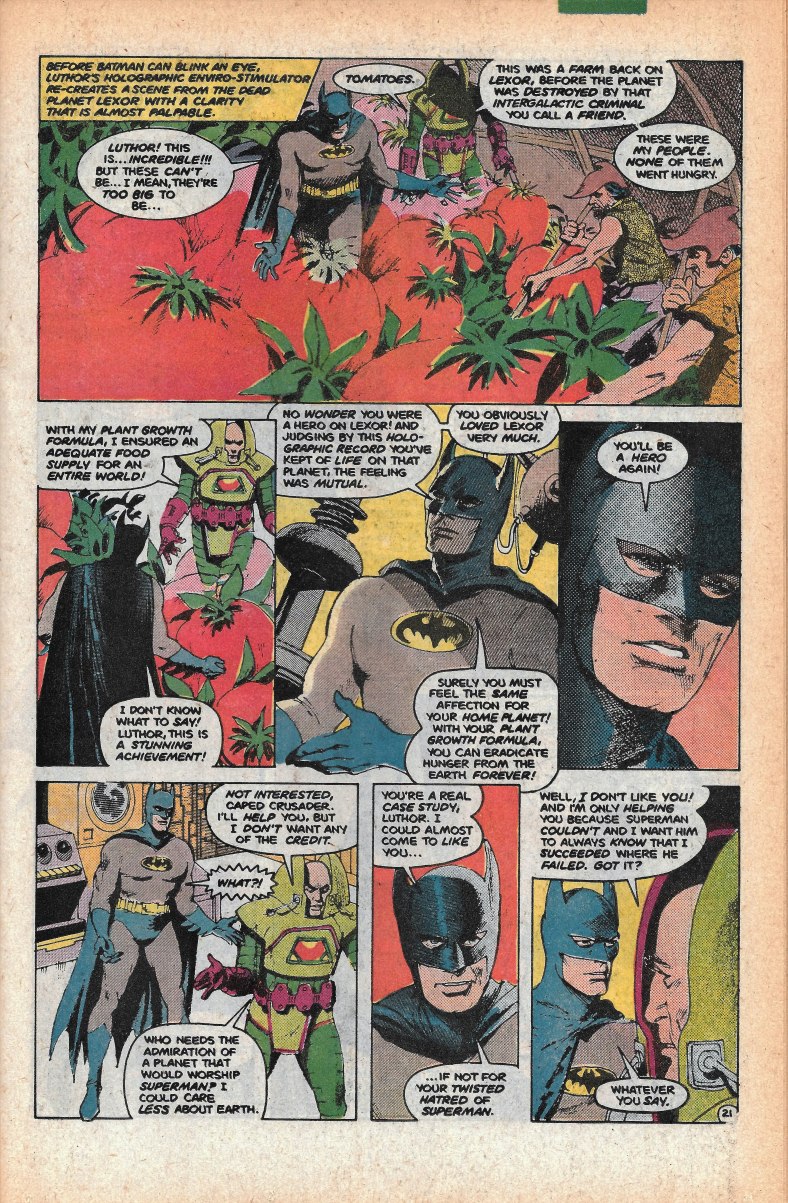 Turn the page and Sal Amendala with Jim Aparo inks make a much easier on the eyes Batman. Add to that the stable hand of Marv Wolfman at the helm as writer and we can end this first half of the book on an up note. One that has Superman clearly playing Luthor's ego to get something he wants: the location of the alien's craft. 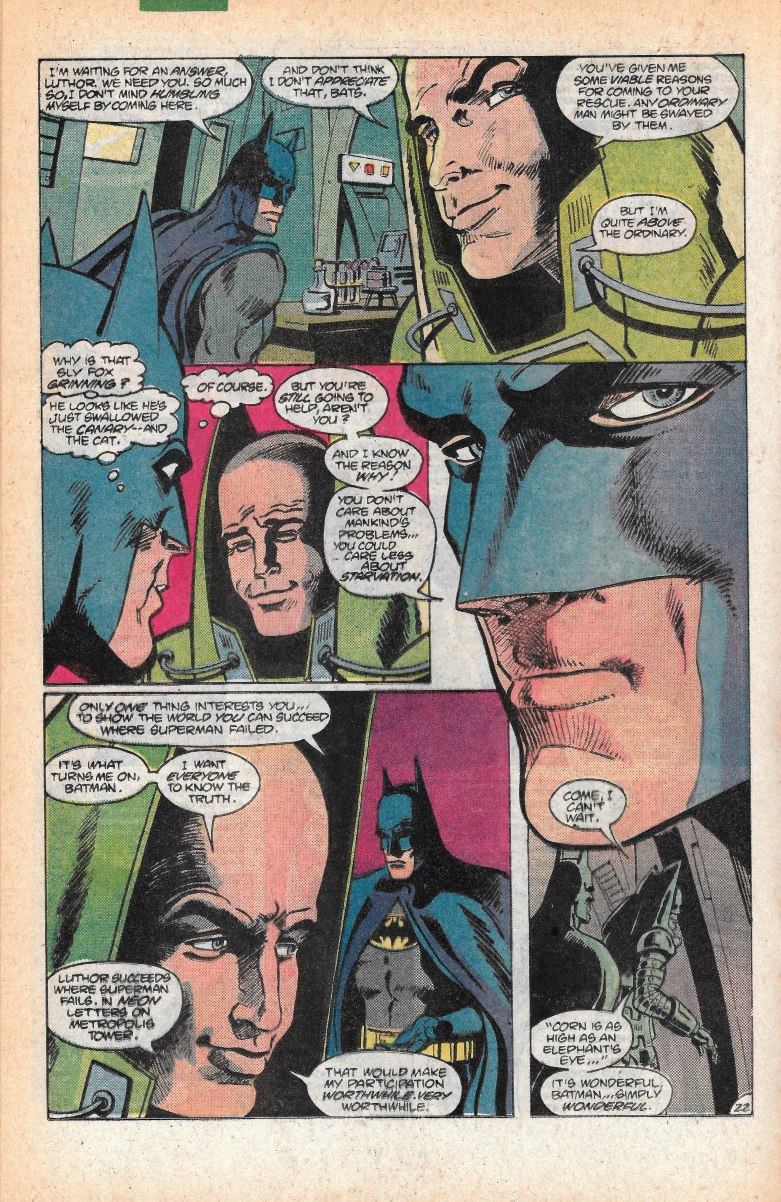 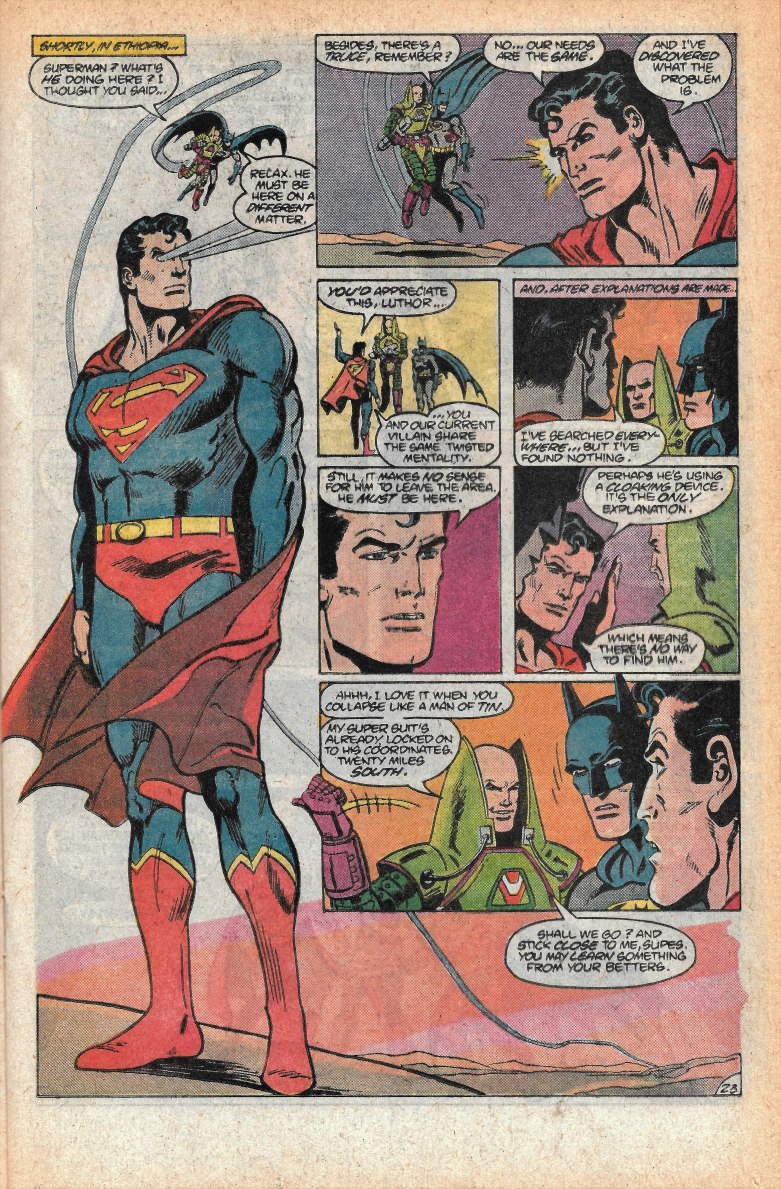 And while we are playing out, since the book was originally a charity drive for peoples in Africa, I thought it only fair to throw out a charity you could donate to today that keeps that spirit alive. Rated at four stars by Charity Navigator, Operation Bootstrap Africa funds a variety of educational programs on the African continent aimed at helping people help themselves. Go HERE if you'd like to donate or find out more.

Posted by SonOfCthulhu at 1:50 AM