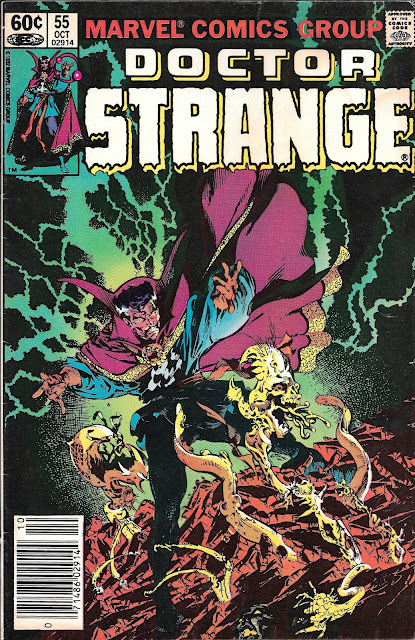 Throw him in the pit of D'Spayre

We cover perhaps the most important attribute of Stephen Strange.

The Makings of a Sorcerer Supreme: Determination

There are times in every person's life where the question if the resolve they possess is equal to the obstacles life sets before them. For Stephen Strange it is no different. His will has been tempered from his days as a brilliant surgical student, through his terrible accident, as he journeyed to the ends of the globe seeking the Ancient One. It culminated in his decision to become the Ancient One's apprentice, sacrificing his life and future to save him.

You will not find Stephen Strange lacking in this area. It is part of what makes him the perfect Sorcerer Supreme, and woe to those who underestimate his steadfastness. You need look no further than this issue's story "To Have Loved…And Lost!"
We begin our tale in the upper room of Strange's Sanctum Sanctorum. It is a fowl night and he is in an even fowler mood. Clea, the Doctor's beloved has left him for her home dimension. 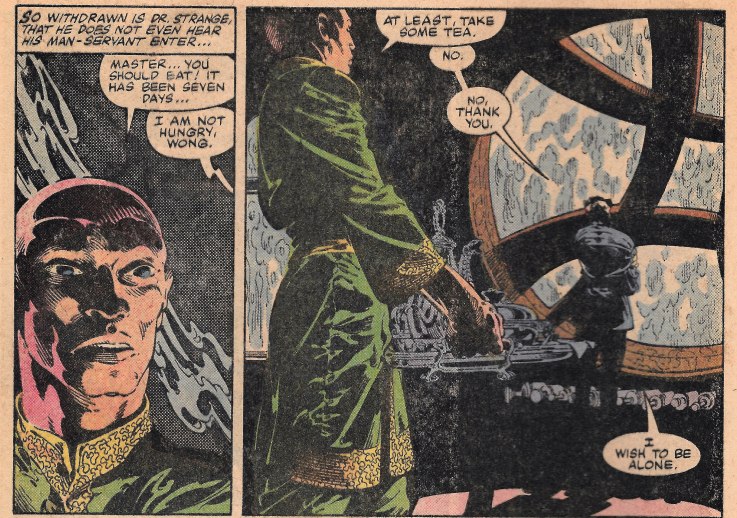 Could this broken man be the one I spoke of so glowingly but brief paragraphs before? Surely this is not the figure of the master of the mystic arts? This is just a man in pain, mourning a love lost.
And if their love was true, how could Clea bear to part with him? What force would drive her from the man responsible for saving so many and loving her so deeply. We will allow her illusionary image tell all. 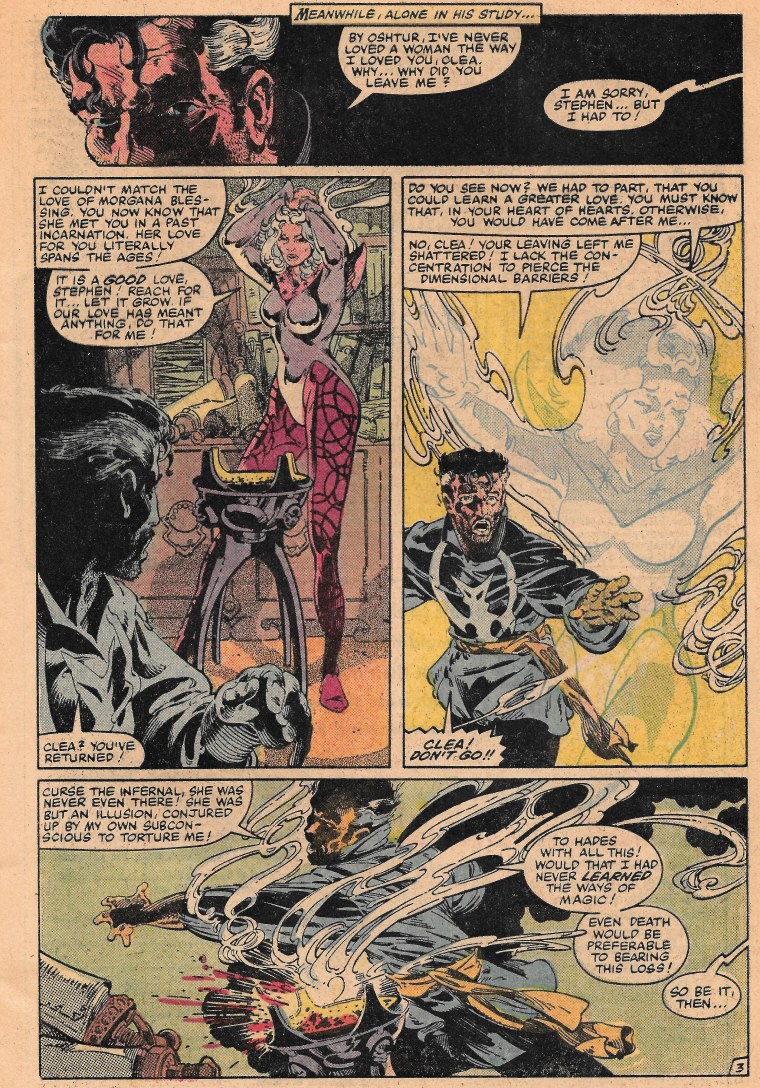 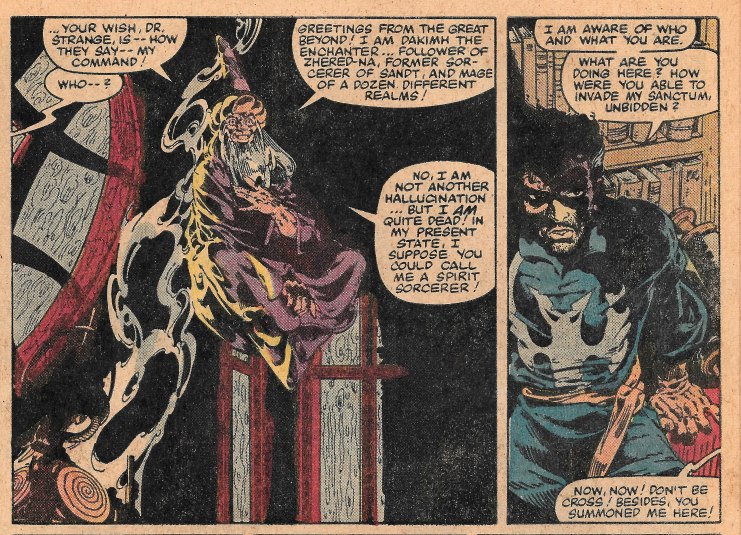 The spirit of the Late Dakimh is typically the companion of Man-Thing and Howard the Duck and a longtime foe of the demon D'Spayre. His presence here is a mystery, as is his method of entry. However that may have occurred, he performs as a surrogate Clarence Odbody, yanking Stephen from his body and showing his astral form in very non-Capraesque visions what the present would be had he not studied magic.

We begin with what occurred to the Ancient One, his mentor and onetime master.

Strange doesn't realize what has been done at this point, but it rapidly becomes clear… 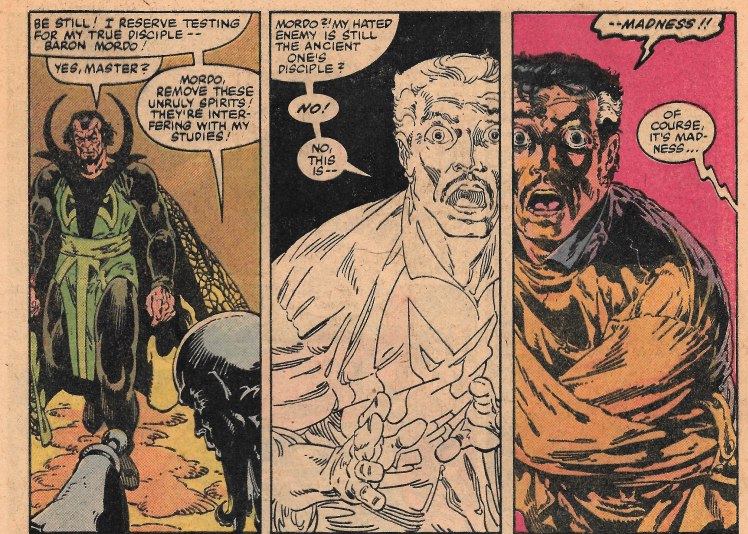 As Baron Mordo is revealed to be the Ancient One's disciple, Strange himself is fitted with a coat with arms that tie in the back… 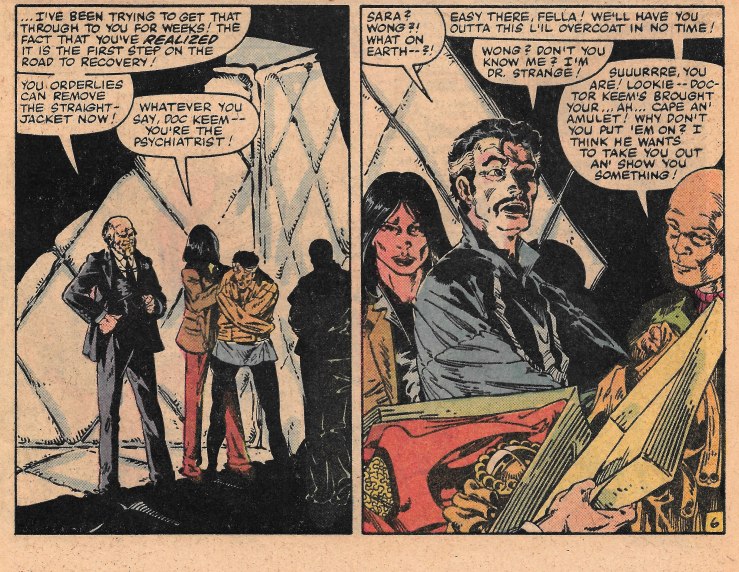 At least until a business suit wearing Doctor "Keem" check him out to show Strange something. Note that Wong and Sara are on hand in this too. 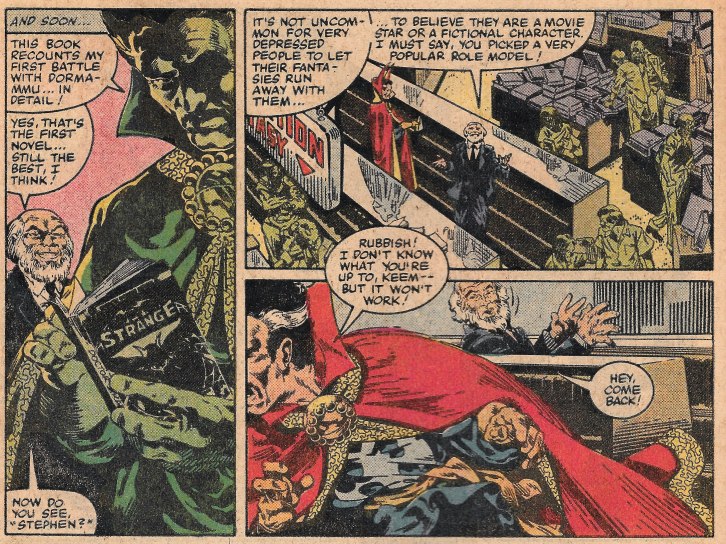 But now things take a very decidedly nasty turn. Dr. Keem begins working to undermine Strange's faith in himself. Stephen tries to get away but his cloak of levitation is useless. To make matters worse, more events happen to make Keem's lies look like the truth. For instance there is a movie about….well, see for yourself. 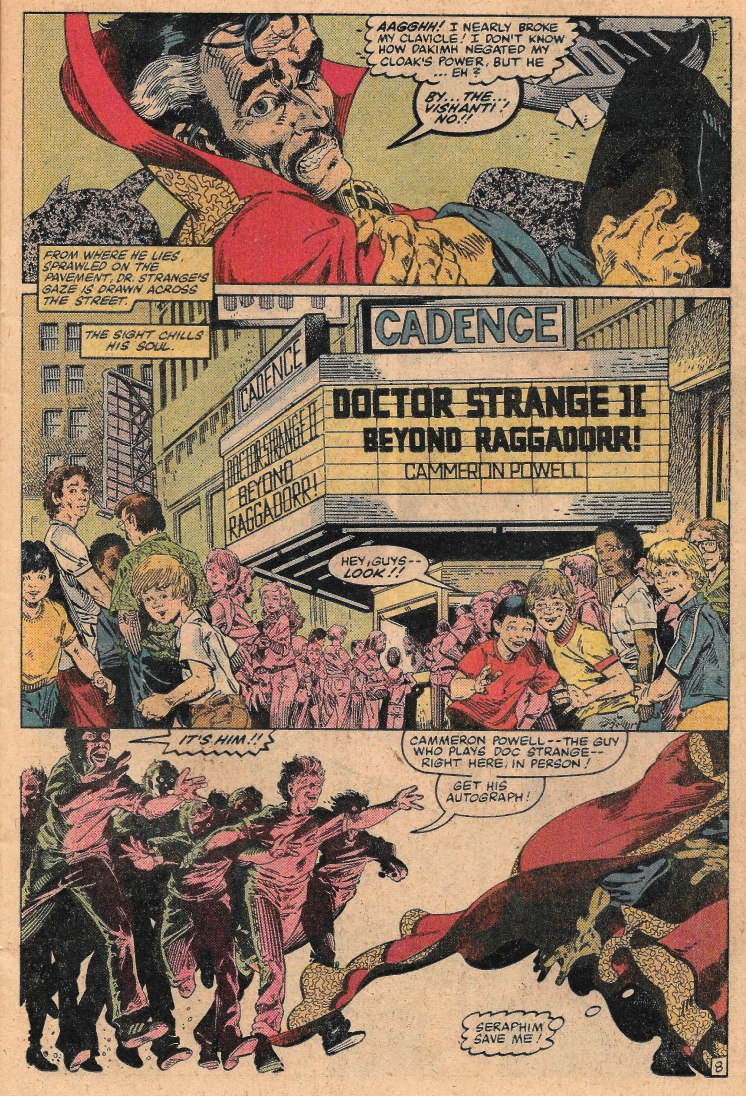 And as this "Cammeron Powell," Strange finds himself hiding in garbage. Garbage that swiftly turns into Keem's car. 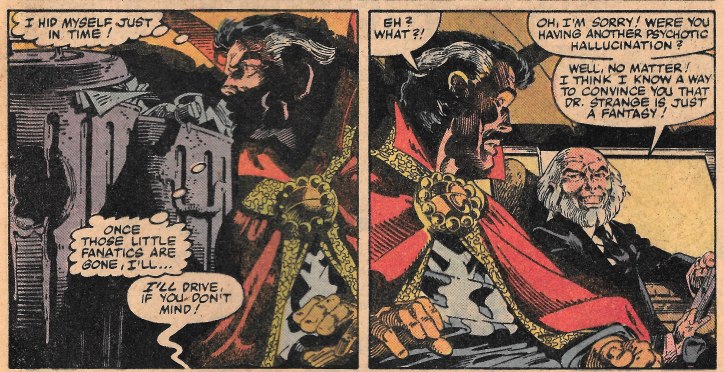 And Keem's next stab at getting Strange to doubt himself is to arrive here: 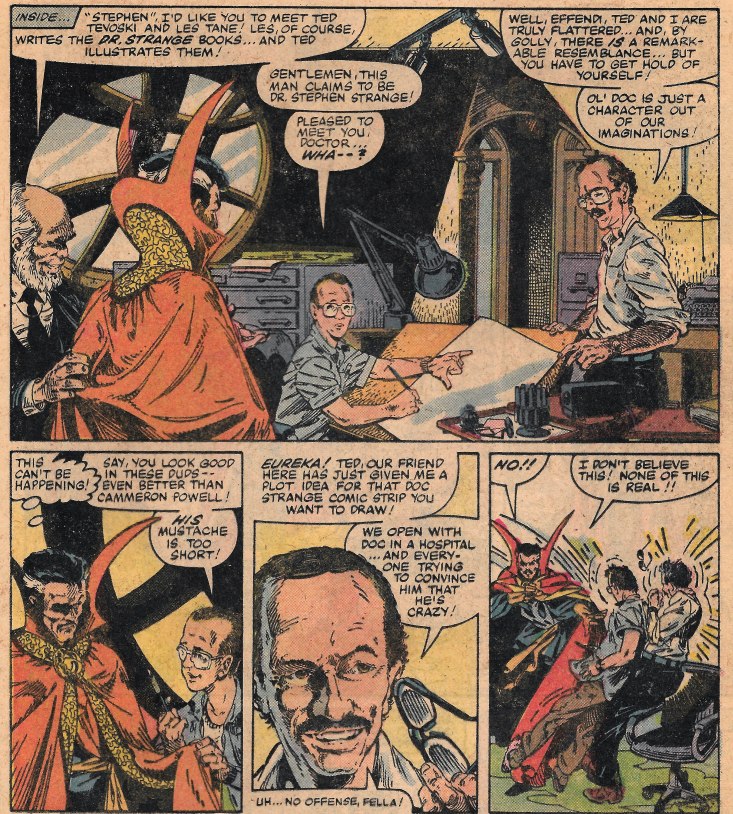 That's a thinly veiled Steve Ditko and Stan Lee up there, Doctor Strange's first artist and writer. When they fail to break his resolve, he pushes them over to reveal they are the cardboard cutouts we know them to be.

Dakimh isn't done yet. He proposes that Strange's life is a play and then causes the Sanctum Sanctorum to come apart like a prop. 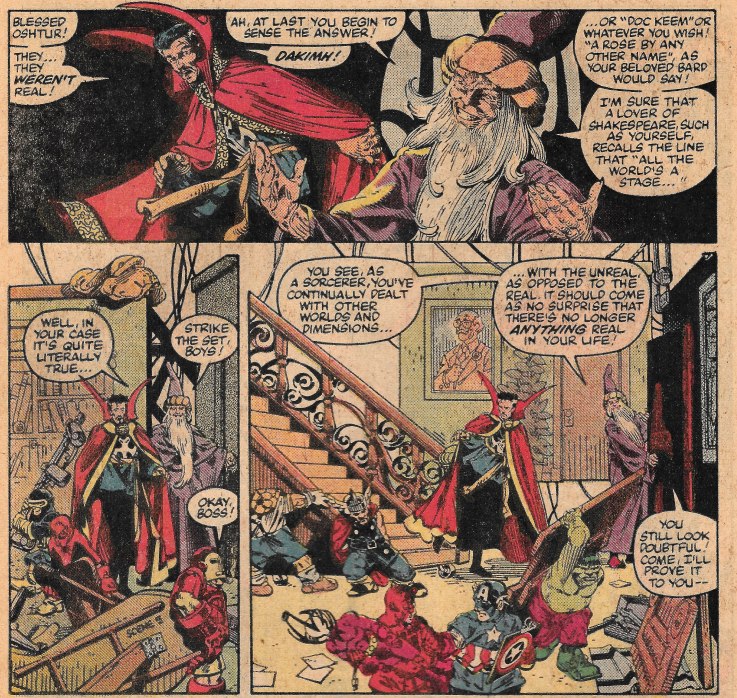 He even opines that the good Doctor's fellow Defenders are unreal as well. He proves it by letting the air out of a very lifelike Valkyrie, who becomes a rubber blow-up doll. 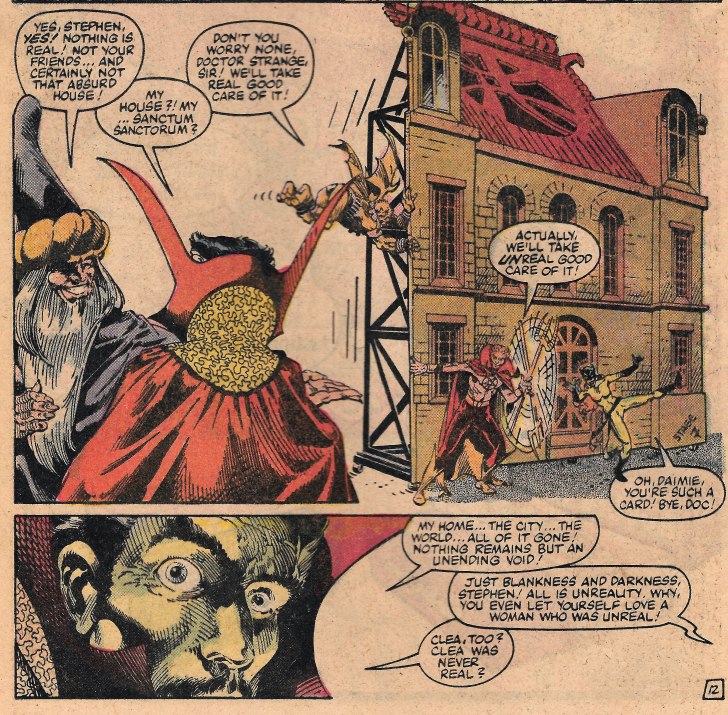 It looks like his words are finally having an effect, too.

Which is when all this unwinds. I'll give you a hit folks: that ain't Dakimh the Enchanter. 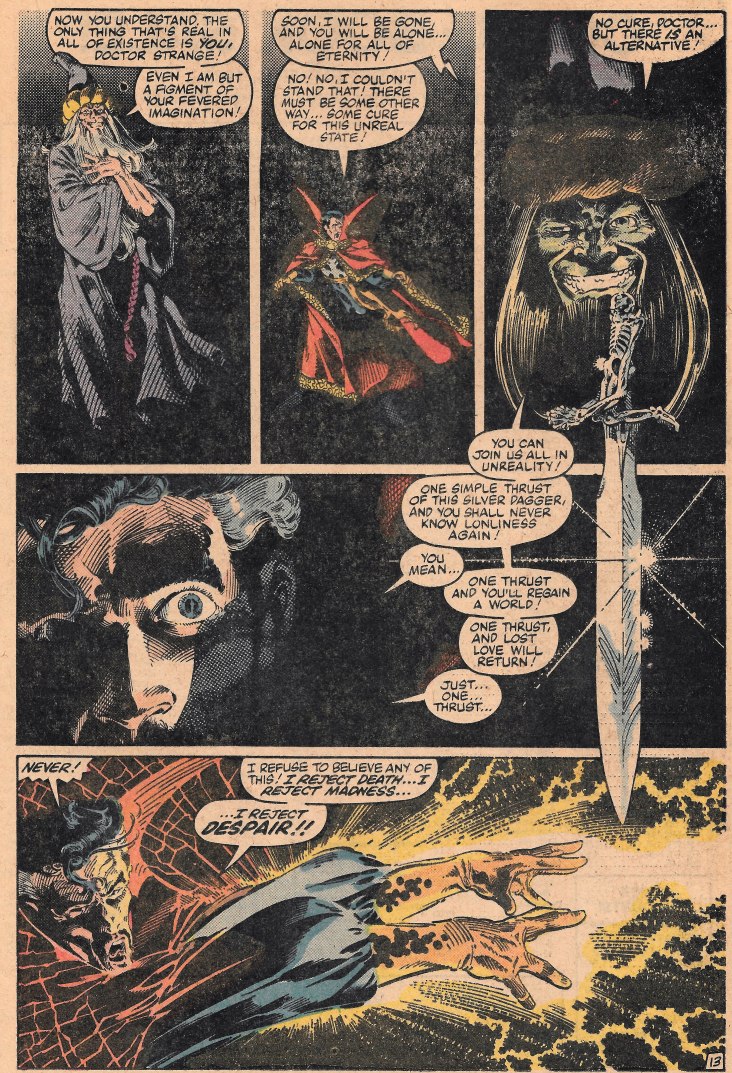 And Doc Strange knows it. So big reveal time: who has been trying to play the Sorcerer Supreme like some kind of patsy? 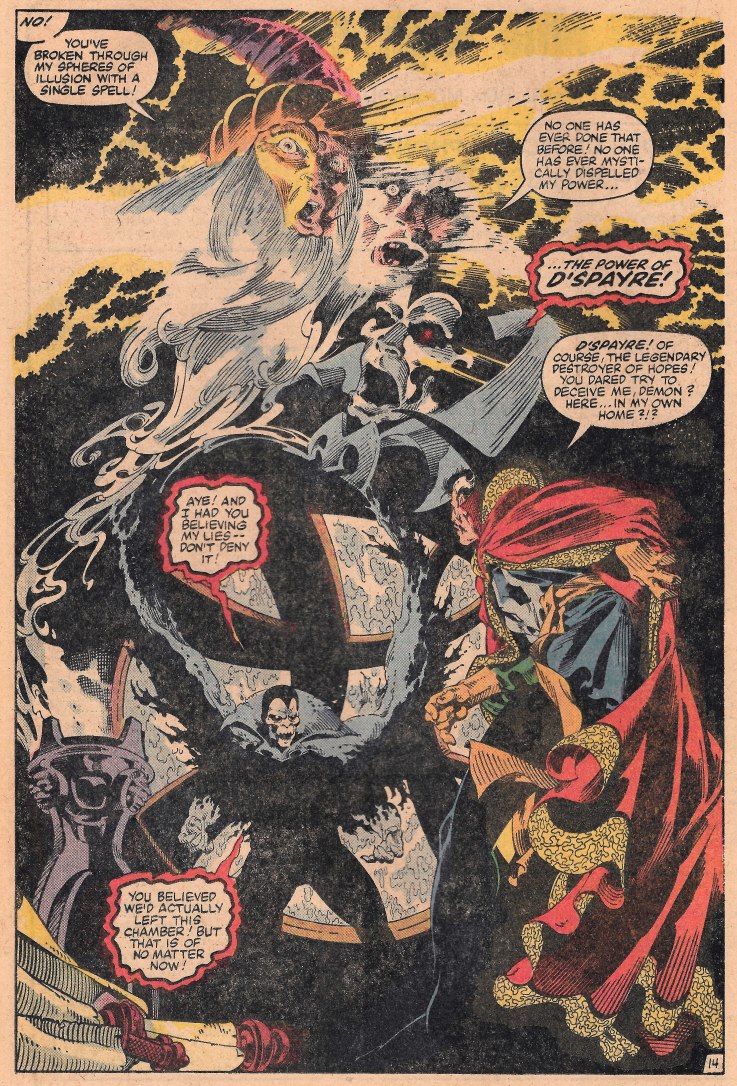 D'spayre, one of the fear lords and a powerful demon. Powerful enough to mess with Strange's head since he is depressed about Clea. Can the Doctor muster enough will to stop him? The answer appears to be no. 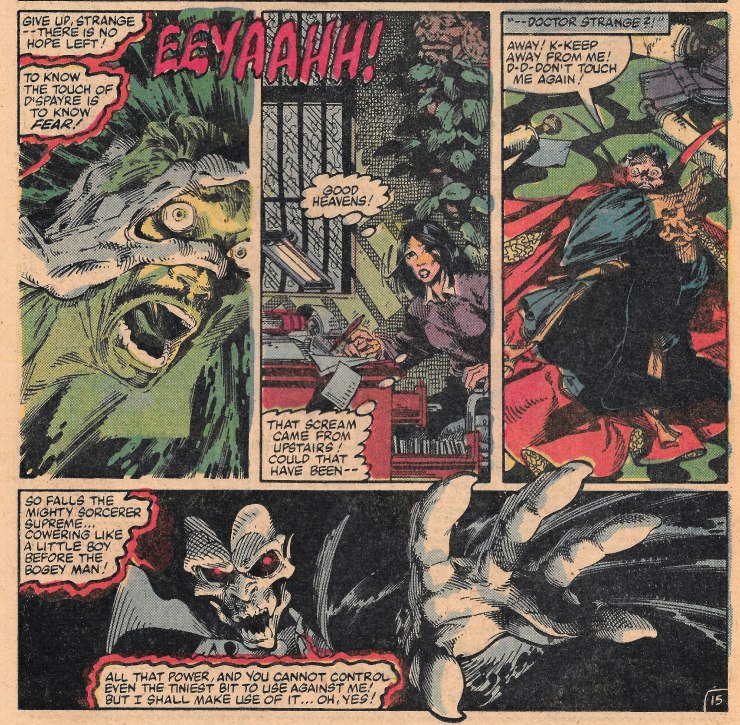 Until D'spayre makes a fatal mistake. 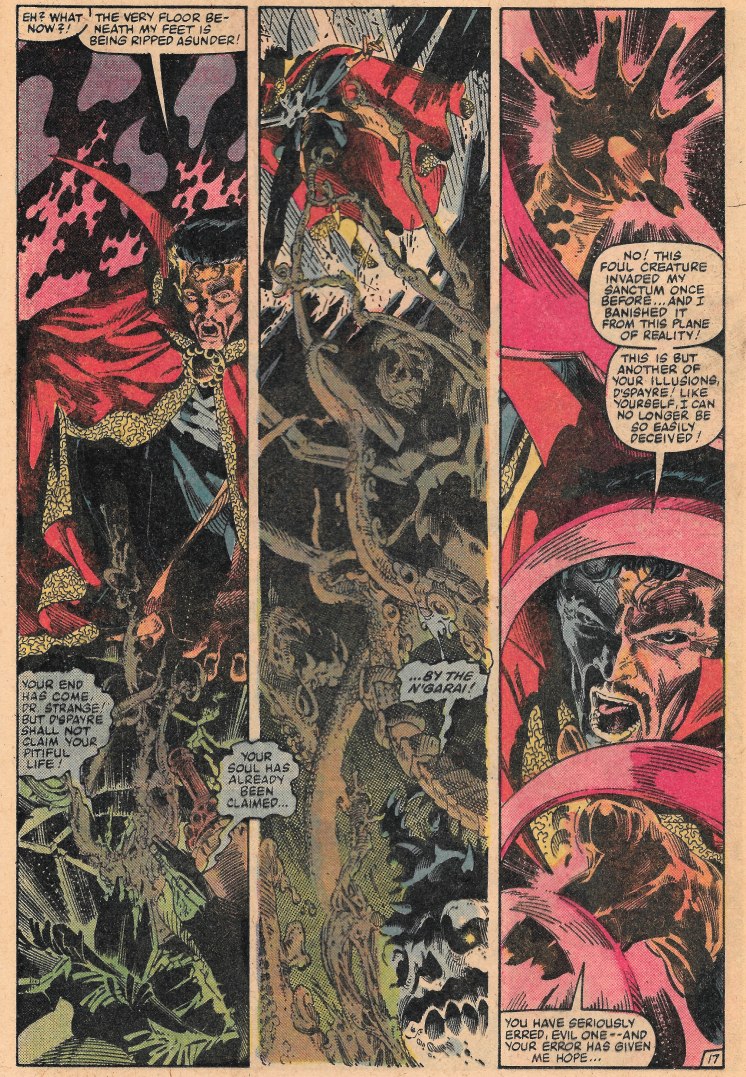 By conjuring up something Stephen knows can't exist in his abode, the mystic realizes that everything done to him so far is an illusion and he gains the upper hand. D'spayre even turns into an image of Clea to prevent the Doctor from sealing him away for all time, but Strange is having none of it. 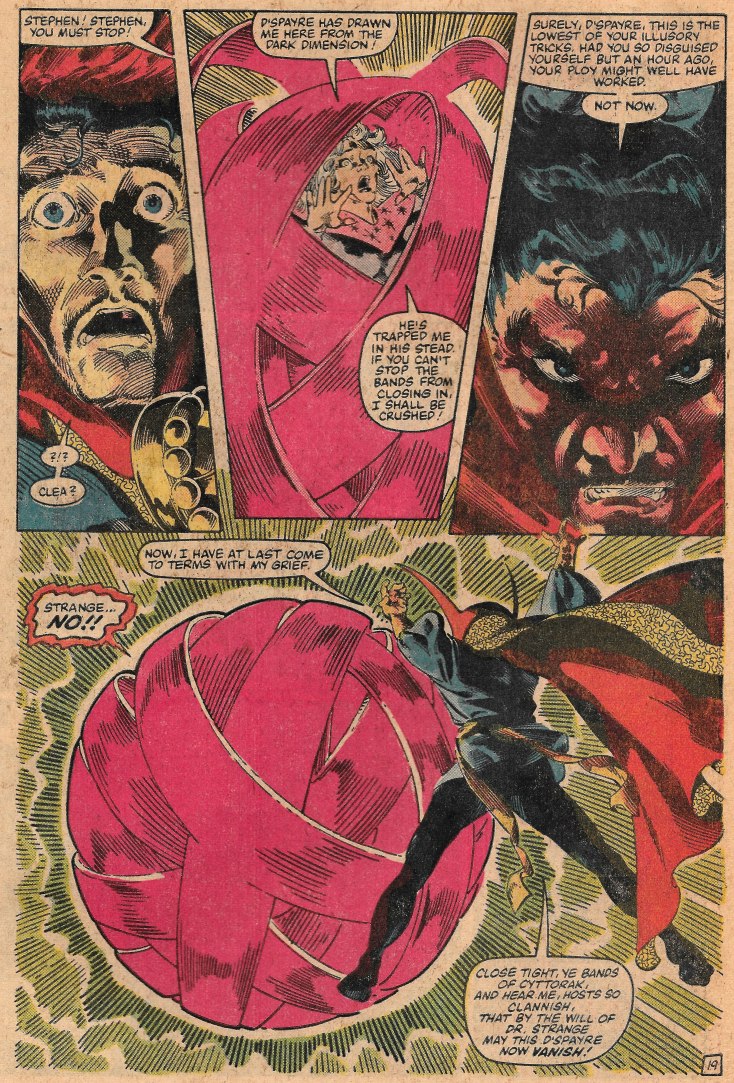 And thus we end with Stephen's faith renewed and his determination unbroken. 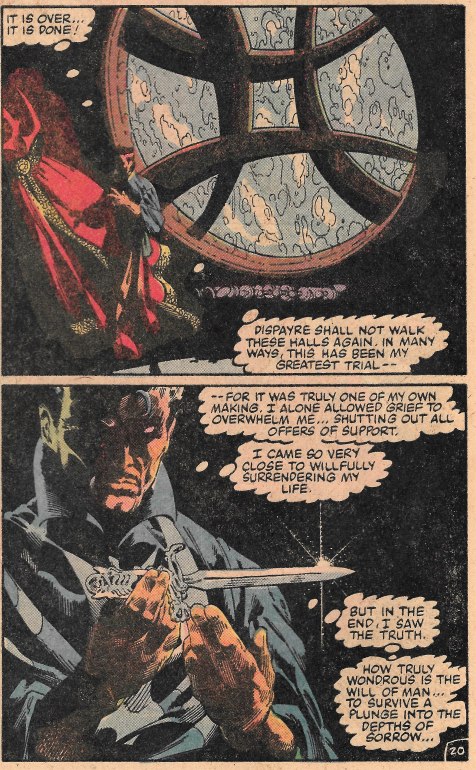 Great story and art in this one. One of the best Strange tales yet.
Posted by SonOfCthulhu at 2:16 AM