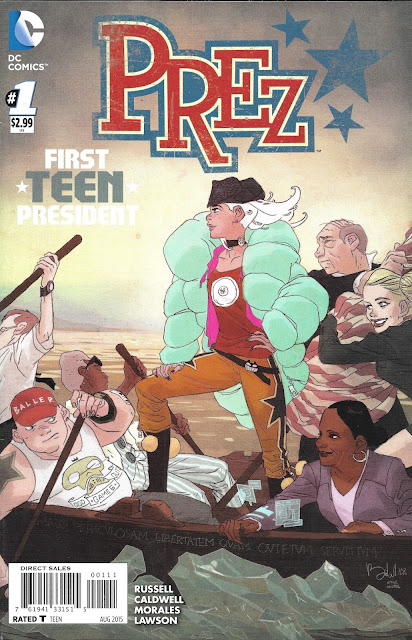 This is an Election Day special review! And you know who else is cooking up a special review? Why Chris Sheehan over at Chris is on Infinite Earths. He's got a certain bald genius getting elected to the highest office in the land. So both of us are showcasing DC's forays into the political realm. Check his blog out and then head on back over here.

Prez was a little known or remembered series from 1973 that lasted four issues. It covered the nomination and subsequent presidency of a teen boy named "Prez." It was a forgotten part of DC's past until The New 52 reboot. That 2015 event saw DC pulling out every concept they had ever tried and still held copyrights to, greenlighting new versions, and then throwing them one at a time against the wall of the comic-buying public just to see what would stick.

Sadly we only got 12 issues this time around. I say "sadly" because the concept and the execution here are just a blast and it should always have an ongoing, and that comes from a guy who's only read two issues.

What makes it so good? The humor, for one. And the smarts. It is full of biting political satire and humor about the process of government. Really takes it and spins it on its ear. Come with me and I'll show you:
We begin with a shadowy cabal plotting the ascension of the next president. I give you, ladies and gentlemen, The Colonels and their leader Senator Thorn. 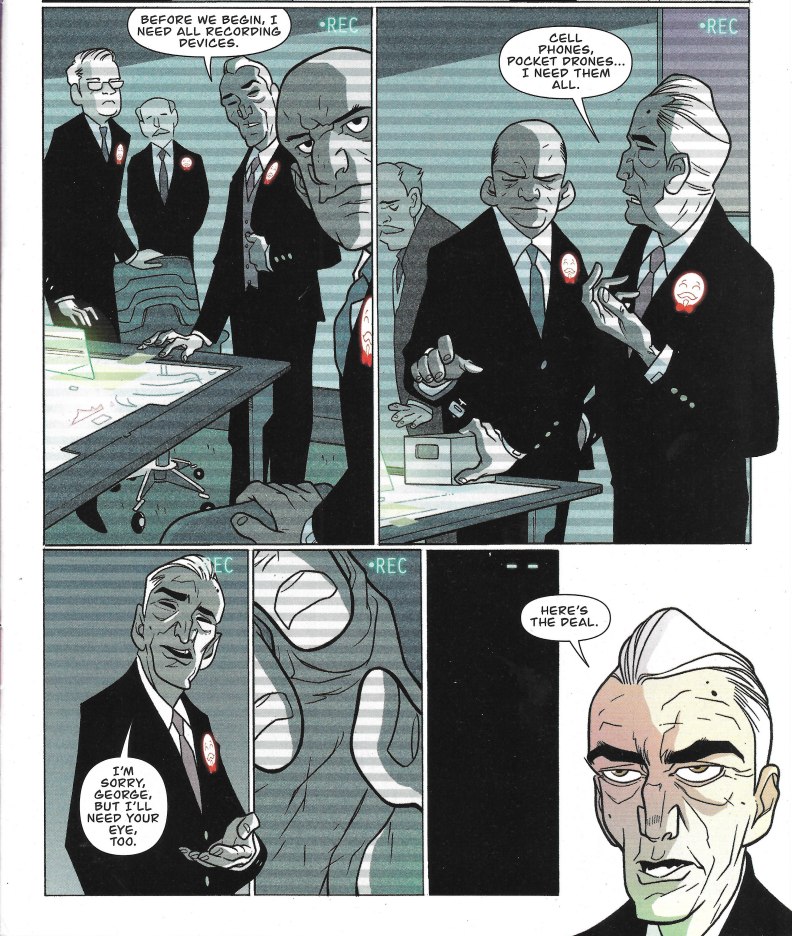 I love the eye bit. Anyway, why are they here? 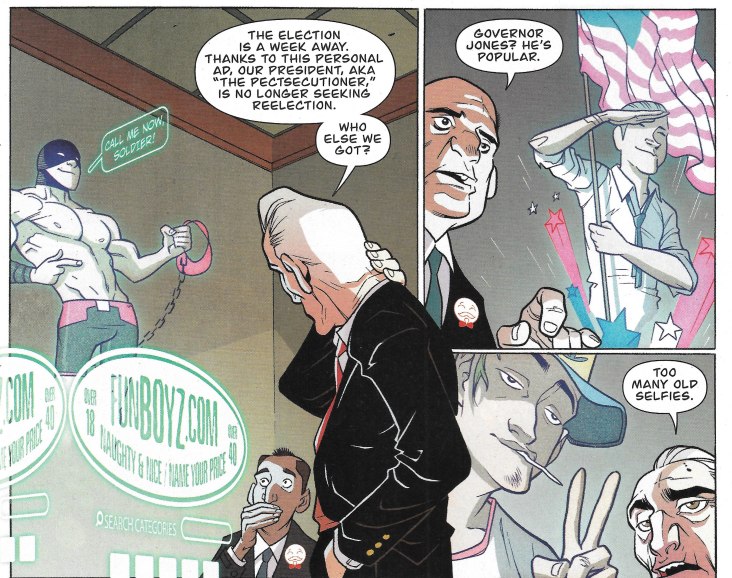 The pickings appear to be pretty slim, but finally a selection is made in much the same kind of way as the frighteningly upsetting 2016 Democratic nomination process. I mean if you follow the notion of a few of us Bernie supporters. They want someone electable, but someone they can control. And not too many selfies. They settle on the unexciting "Gary Farmer."

Meanwhile at a place called Lil Doggie, weenies of a different kind are being kept off the grill while it is cleaned. And our cleaner-in-chief is Beth Ross, soon to be internet star. What for? Well, her co-workers are filming her grill cleaning for a future training video, when this happens: 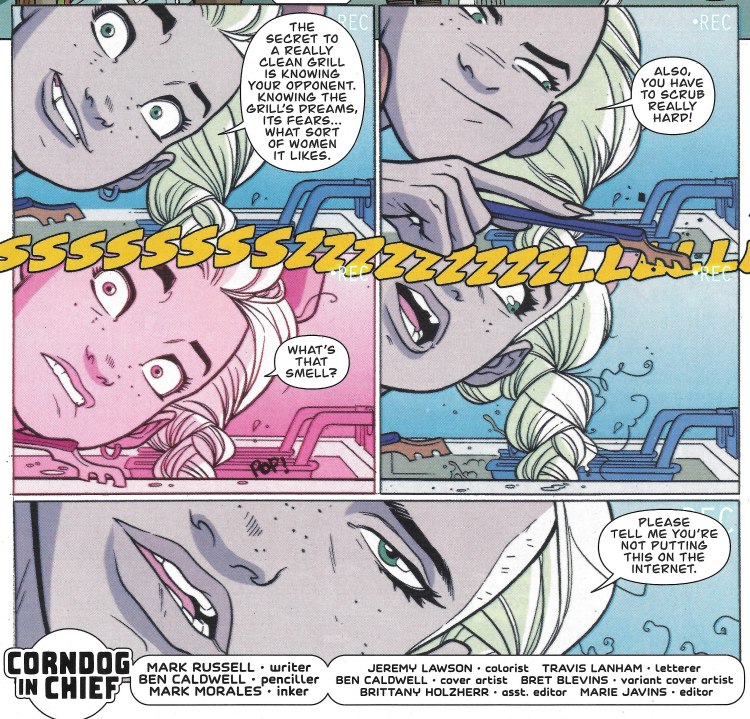 That will come in handy later. For right now though, we turn to Senator Thorn, doing his best to shoot down appeals for common sense in the application of welfare funds. Oh, No! None of these will do. Thorn has his own idea, and it is so bizarre and invasive and demeaning that it might have been birthed from an actual Republican think-tank. It starts with the words "Taco Drone." 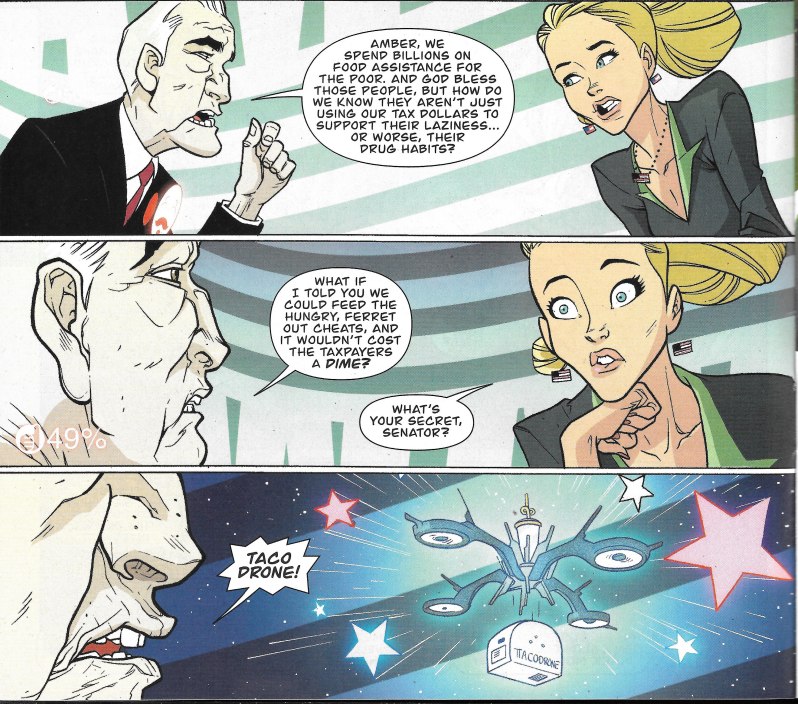 As in "welfare taco drone." And it would deliver these fine items: 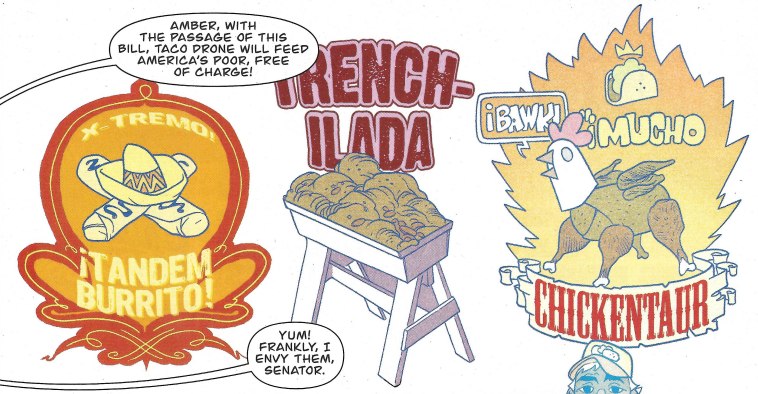 Let me just stop right here and state that what comes up in this is a kind of sharp as a skewer political satire that is on par with the best of the Robocop news montages. Ready? Here we go. 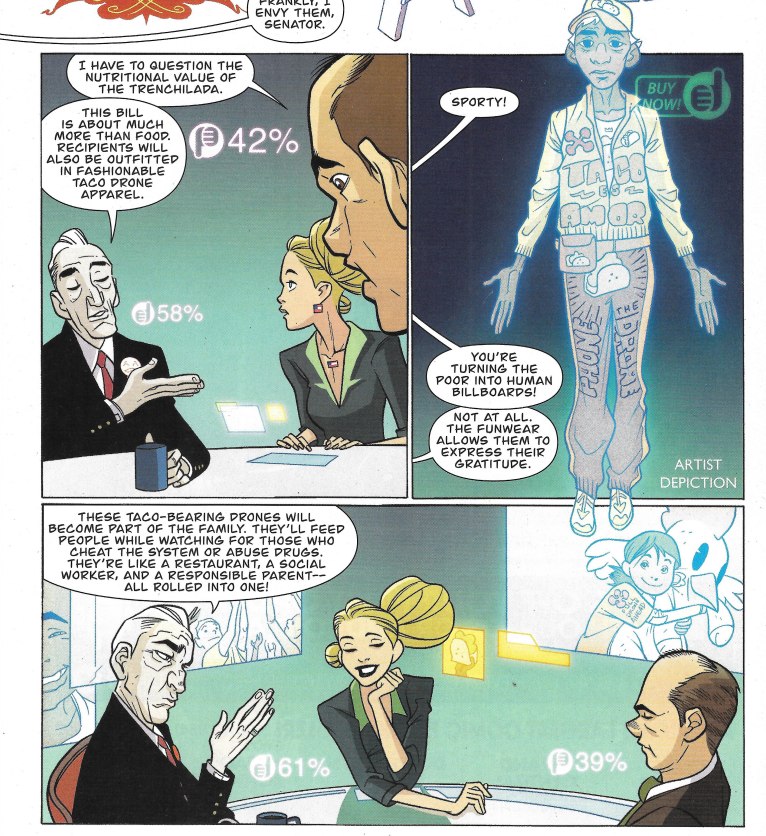 First up note that there are active Facebook/Reddit thumbs attached to each Senator, so we get live popular opinion on what they are stating and it affects the losing side immediately as he is forced to backpedal. The ideas presented are the worst kind of welfare-queen tropes in existence: they are primarily some form of non-Caucasian ethnicity, they are lazy drug users, they should be demeaned in a way that makes them easily identifiable as someone who needs public assistance, and whatever is done around this, has to transfer money to corporate donors.

It would be frightening if it didn't seem so close to actual reality. But just wait, it gets worse. 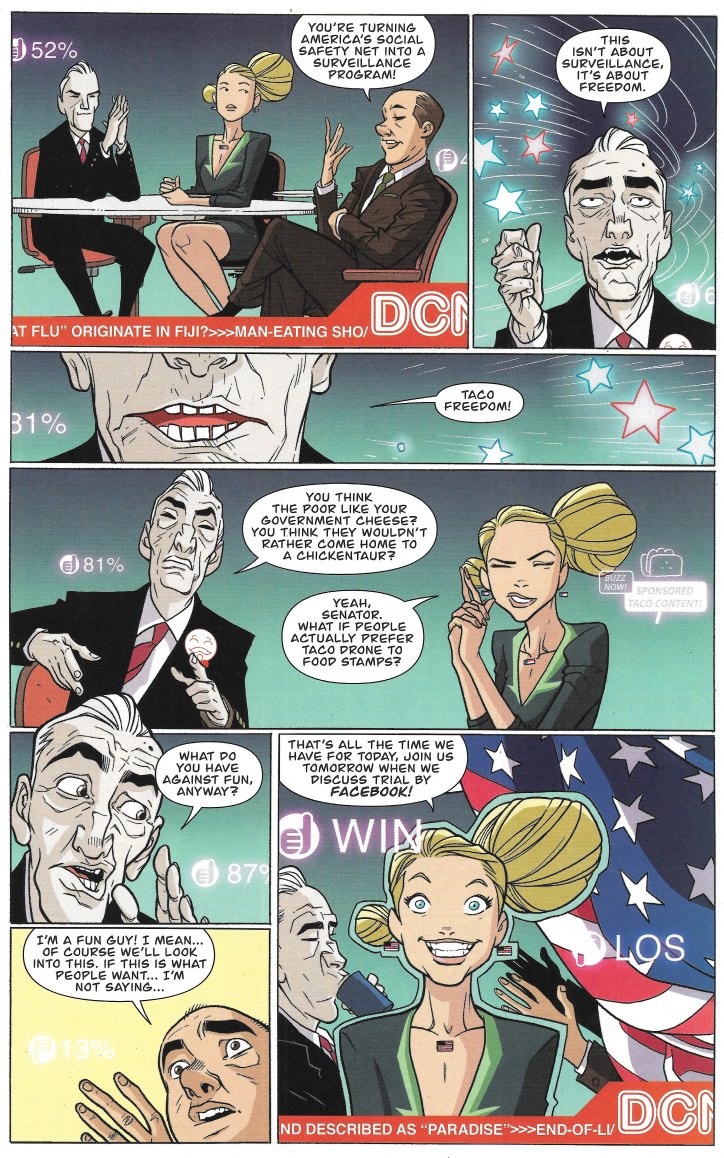 That is the most horrifyingly close to "modern day life" satire I have ever encountered. This is a fun house mirror held up to the American political landscape, but the more you look at it, the more the image doesn't appear to be distorted so much as it has brought REALITY SHARPLY INTO FOCUS. 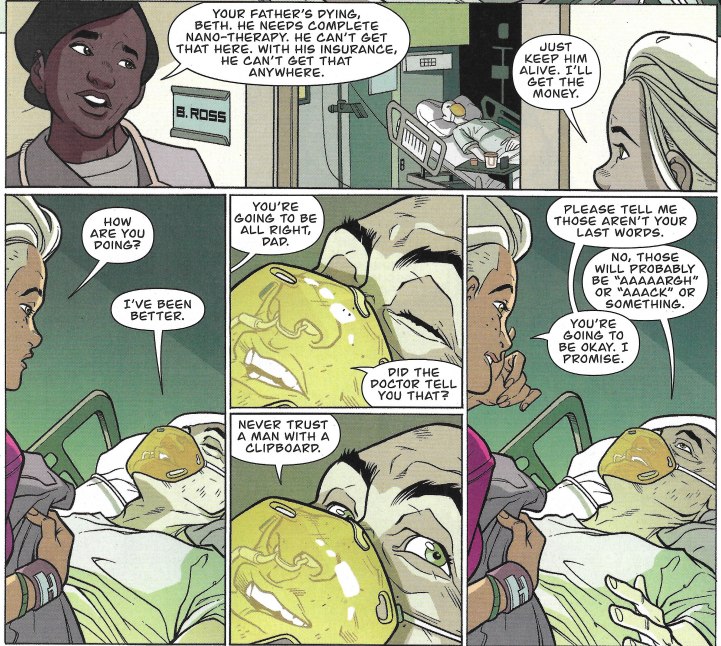 We spin back to Beth Ross and her dying father, who could be saved except for not having enough medical insurance to cover the procedures. Sounding familiar yet?

Then spin out to Senator Tom Downey, who has so lost credibility because of his interview opposite Senator Thorn that now his bid for the presidency is in jeopardy. His campaign manager books him on the Puppy Slaps internet stream. 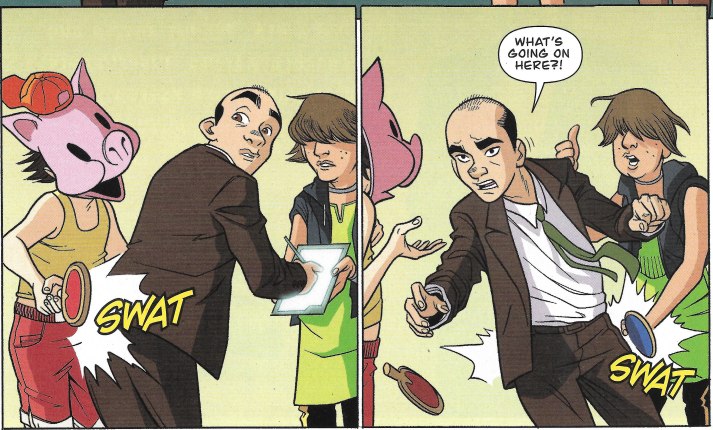 …will determine the success of candidates reaching out to the younger demographic. This is what the future will look like: instead of basking in the lights of the Tonight Show or the Late Show, candidates for public office will end up on some "hot" vlogger's live stream being subjected to the worst pranks of all time. 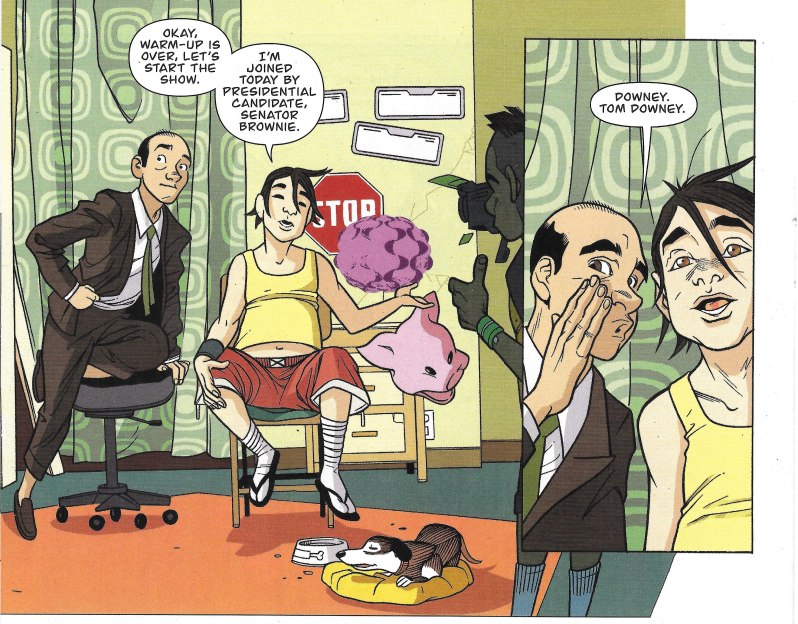 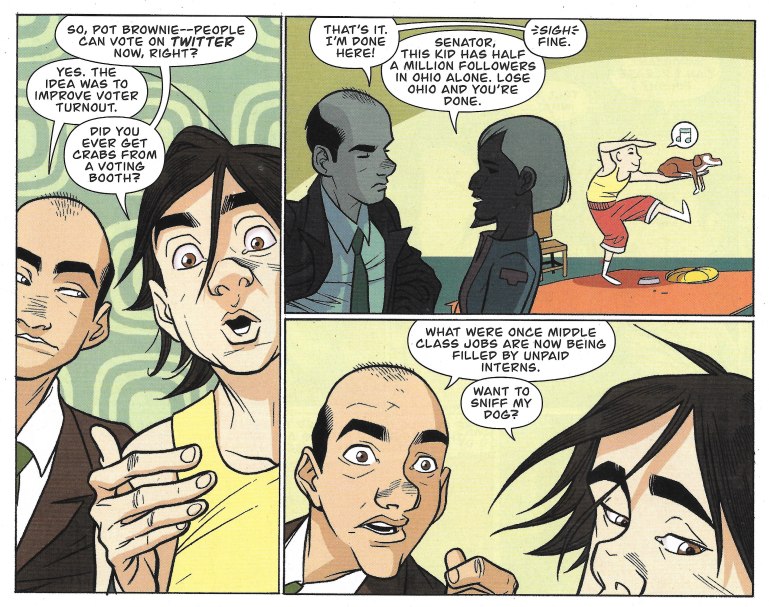 …and being called "pot brownie" while trying to push his platform talking points. Absurd, you say? Call me in five years. At that time this will be what it will take to become the next President of the United States.

Where is our other nominee, you might ask? Senator Thorn's puppet Gary Farmer is on the fabulous game show…. 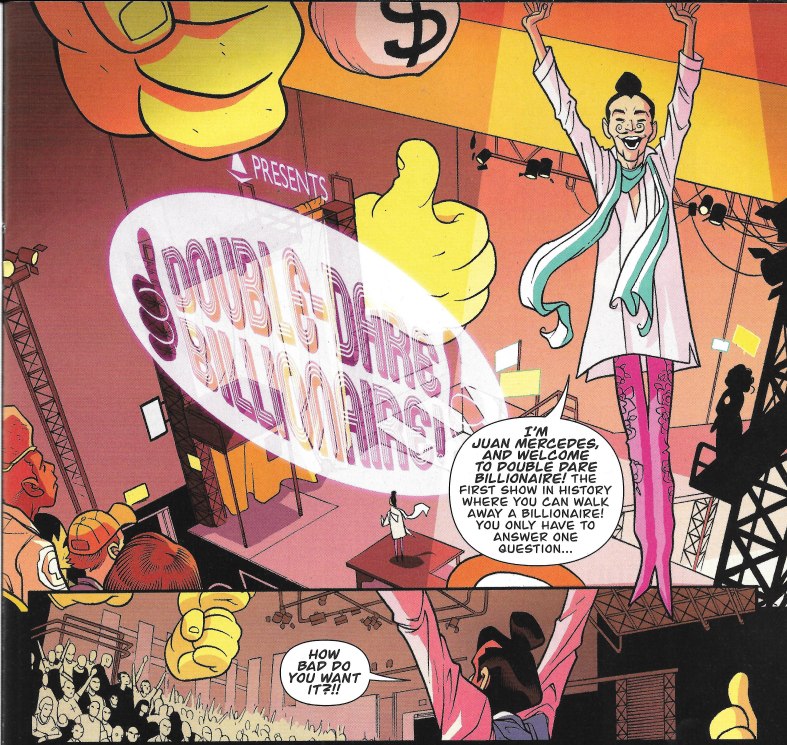 And "how bad do you want it" means exactly the kind of bloody suicidal challenges that you'd think it would mean. One contestant plummets to her death and the other must endure an obstacle course of terrors before being forced to shoot himself to win the money.

Crazy kid does, which means Beth Ross has to go back to her Dad empty handed. 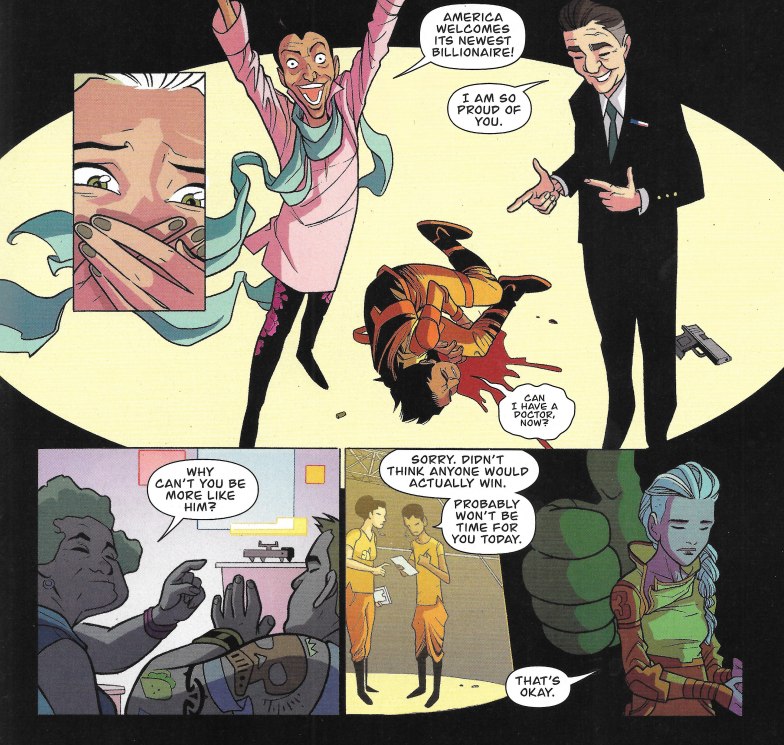 After a page long shot of her Dad in a hospital bed looking VERY ill while Beth checks her "SickStarter" campaign, only to find it is nowhere near her funding goal, we turn back to the election. Beth's Father having this illness gives the story a huge emotional punch. Enough of that, however. On to the talking heads: 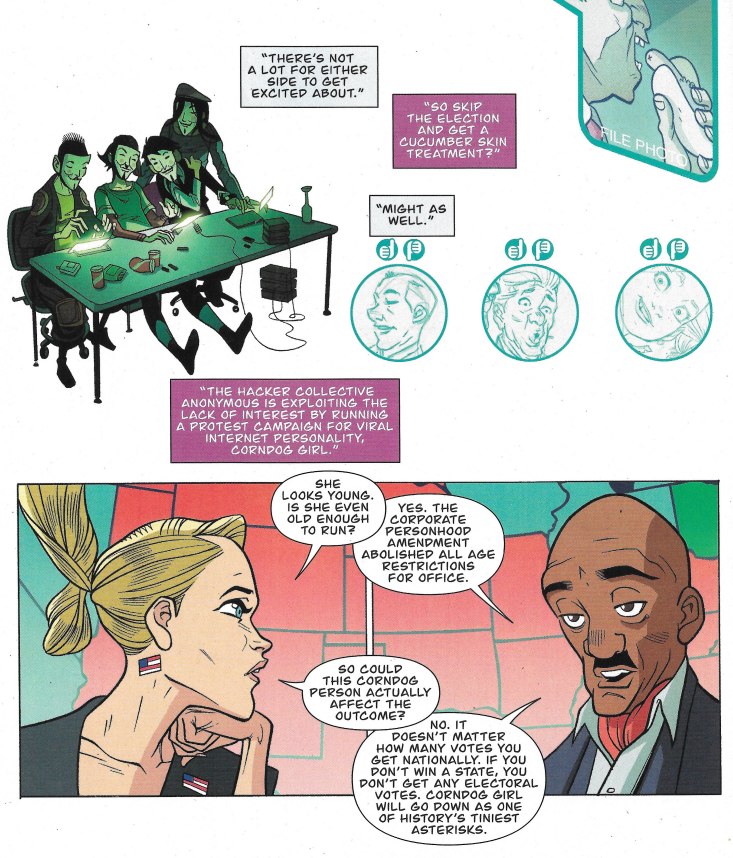 So the future version of Anonymous like Beth's burning her own hair video so much that they toss her name into the ring in all fifty states. No small feat, that. However everyone discounts her since she would have to win a state to even be in a runoff. Much like this guy Evan McMullin IN REAL LIFE… 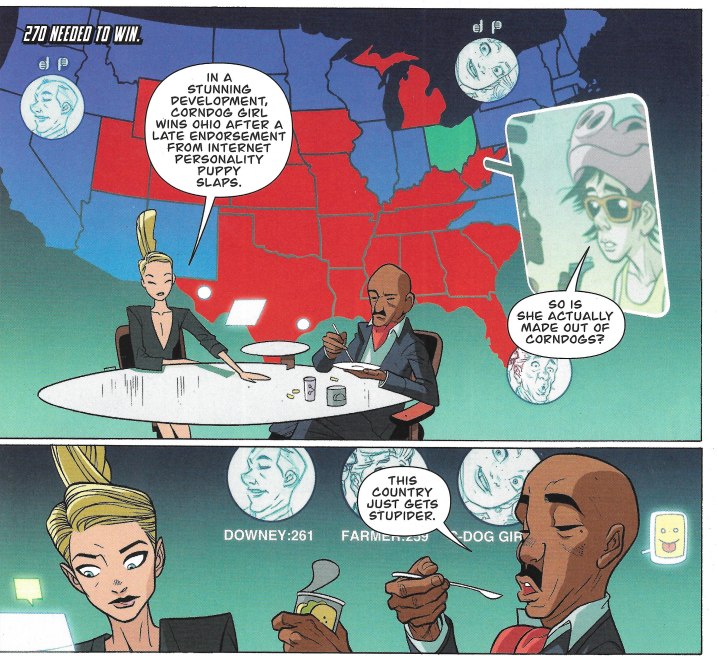 And then the election happens and Beth takes Ohio due to a last minute endorsement by "Puppy Slaps". 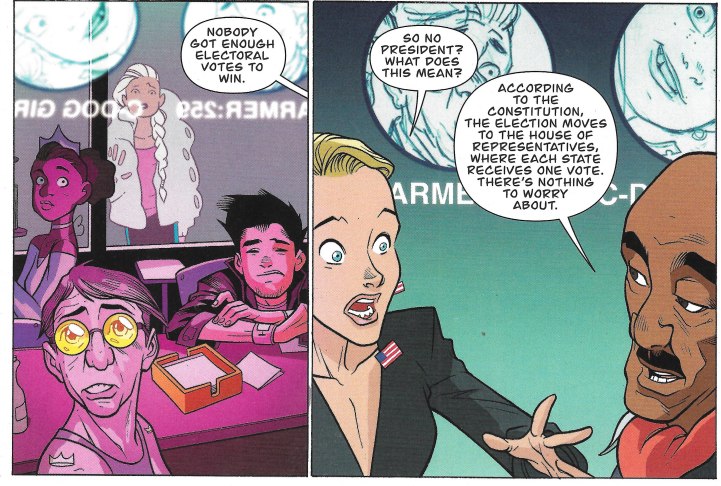 And the other two parties split the electorate 50/50 and neither candidate garners the 270 electoral votes needed to win the Presidency.

Suddenly we are thrown into the House of Representatives, which is where we will take this part of the story up in issue 2, but not before a few nervous CEOs hold a quick meeting. 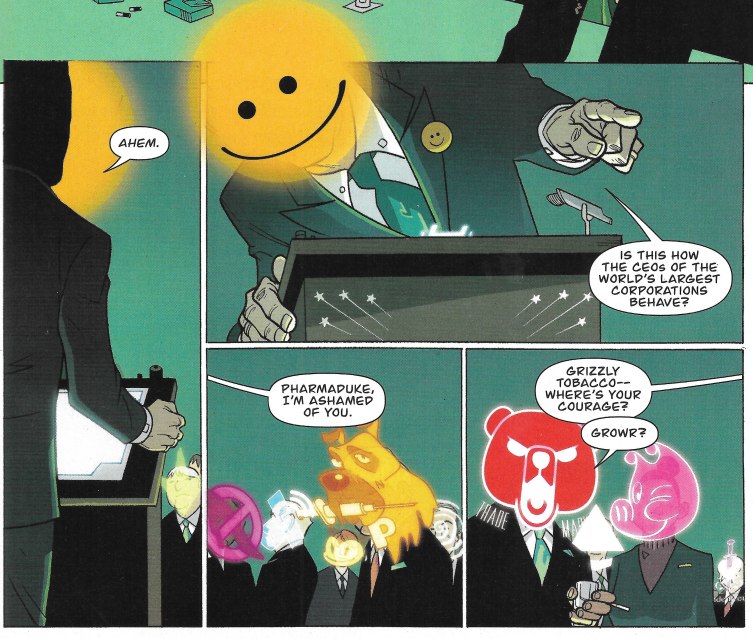 The book has an eerie way of casting new light on our political process in a way that makes you want to do something about it, limiting special interests being one of the major problems we face with our participatory democracy. In its own little way, the book gives me that Transmetropolitan vibe.

The CEOs vow to continue to run things no matter which candidate wins the election. We'll see how that turns out for them.

These books are pretty much everywhere. I've found them in nearly every discount bin I've been too. At least issue one is an easy find, the others I have on my automatic pull list when I find them. The book is sharp, witty and knows a good deal about satire. If you see any, grab them. Someday someone will realize these were gold.

And also a crystal ball into our political landscape of the future.

As for me, I'm off to go cast my vote. You should TOO! Happy Election Day, everyone!
Posted by SonOfCthulhu at 4:36 AM