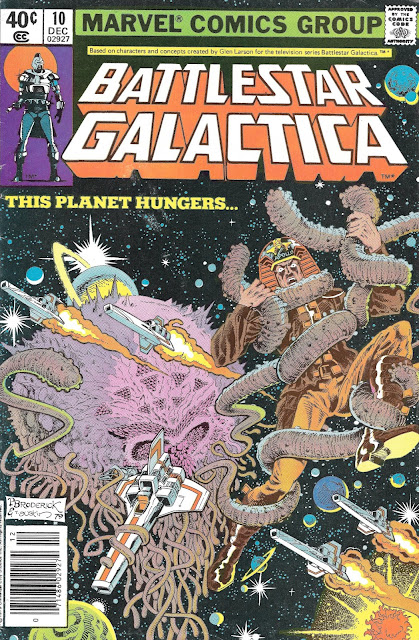 Kicking Halloween off with a scary giant space testicle

I mean, I could easily see why you would think that. However, it isn’t remotely the case. I think. I think I’m still alive. Maybe someone should check on me just in case though? I might be mistaken.

Not that it would matter in October because this month is Halloween post-a-day and even being dead won’t allow me to stop the post train from rolling down the tracks. “Whoo-whoo, mothertrucker!”

Our first stop this pumpkin-spice season is the depths of outer space, as the Crapbox travels back to my yesteryear and a little-loved yet fondly remembered version of the show called Battlestar Galactica. The Crapbox may have visited this neck of the woods before, I can’t really be certain. Too much time away from what I’ve reviewed will do that to an aged brain like mine.

What you need to know is that this Marvel book popped out alongside the original 1978 TV series, lasted 23 issues, and the faded alongside the show. Like Marvel’s Star Wars before it, some of those issues were illustrated by such talented hands as Walt Simonson, Rich Buckler, Klaus Janson, Sal Buscema, and (our artists on this issue) Pat Broderick with Eduardo Barreto and Pablo Marcos. Our writer this outing was Tom DeFalco, still on his way up to his own stint as EIC.

Being 10 issues down the chain we are well past the actual recap of the television movie (the magazine format graphic novel of which had secured the book a ongoing) which was sliced into the first three issues. The adaptation of the two-part TV episode “Lost Planet of the Gods” appeared as issues 4 and 5.

But by issue 10, BSG the comic book and diverged greatly from BSG the TV series. At this point in the comic story our wagon-master to the stars, Commander Adama, got himself trapped in a dream state courtesy of a technological memory simulator. Sadly, instead of finding info that would lead the BSG fleet to the lost 13th tribe of humanity, Adama just found his dreams were jumping off points for stories of past conflicts with the robotic Cylons.

No doubt this was done to keep the book somewhat behind the TV series so they didn’t wildly diverge from each other.

Whatever the purpose, what we get is this tale of terror in space care of Lorne Greene in a big snow globe. Our lead-in is these nice exterior shots of the Galactica… 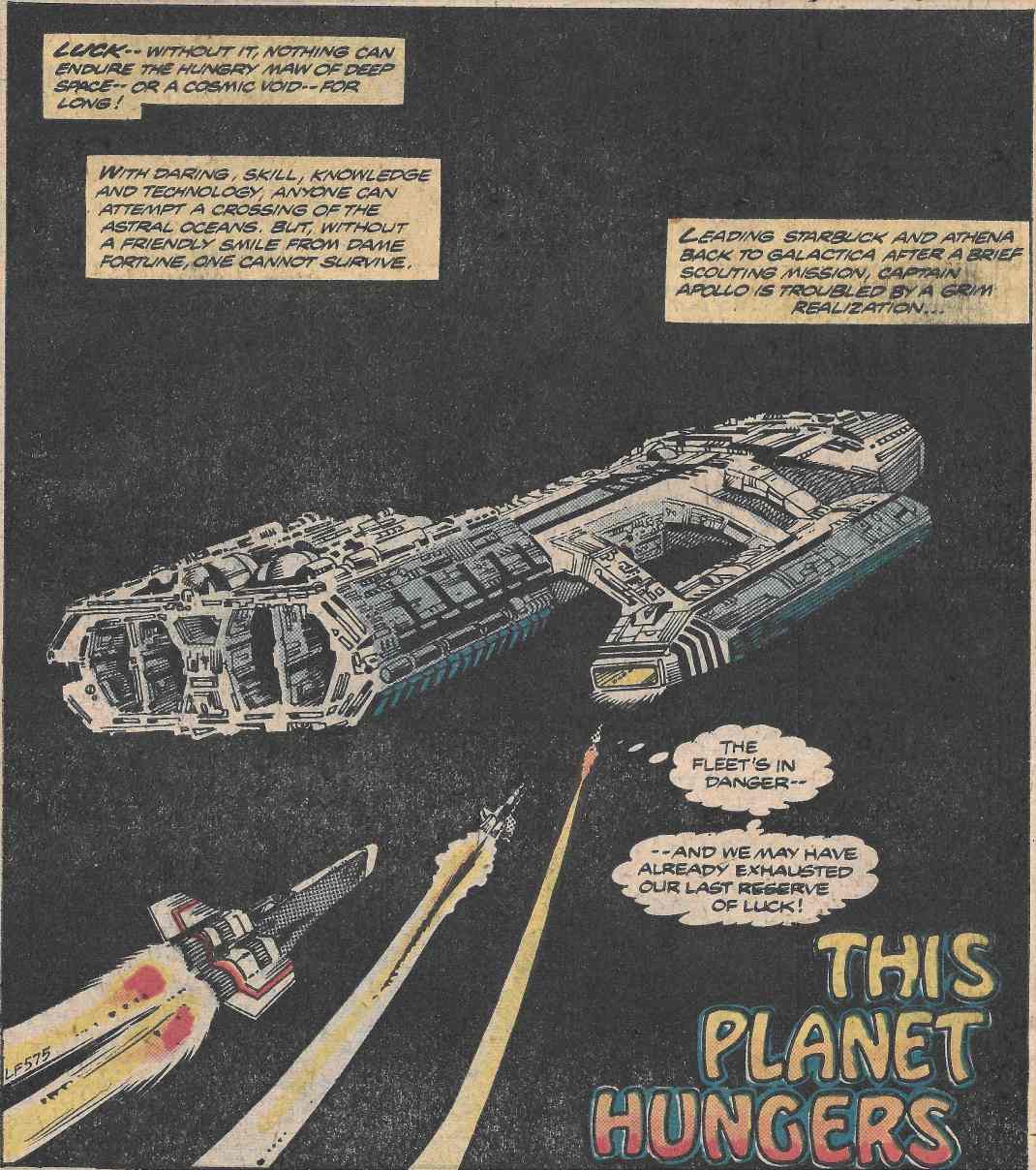 …followed by Apollo racing to check on his Father’s state. It is currently unchanged. 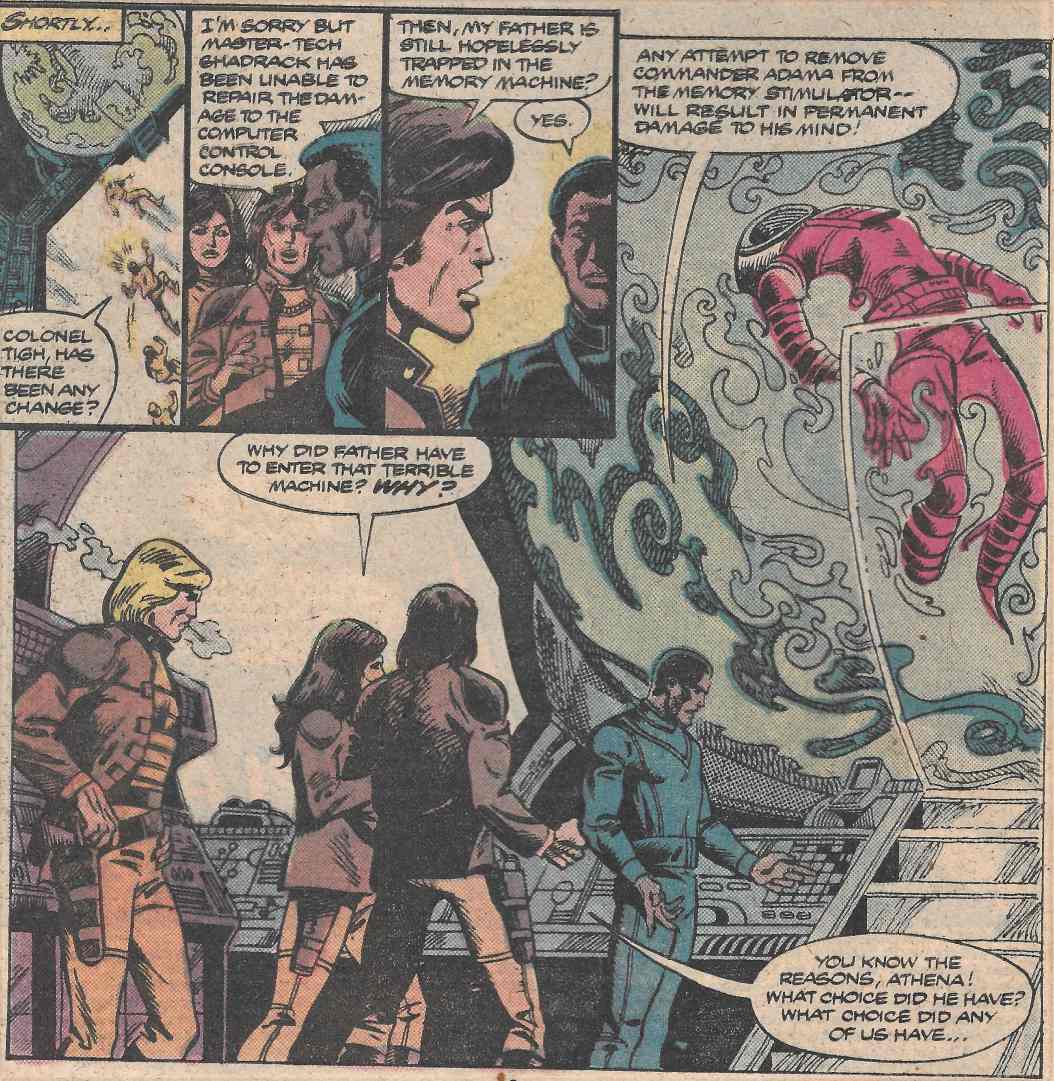 But as Apollo, Athena, Starbuck and Tigh look on, we get the start of our flashback story. Something that happened to Apollo and Starbuck far back during the war with the Cylons…but strangely is known about in such complete detail by Captain Adama that he can remember their parts of the story too… 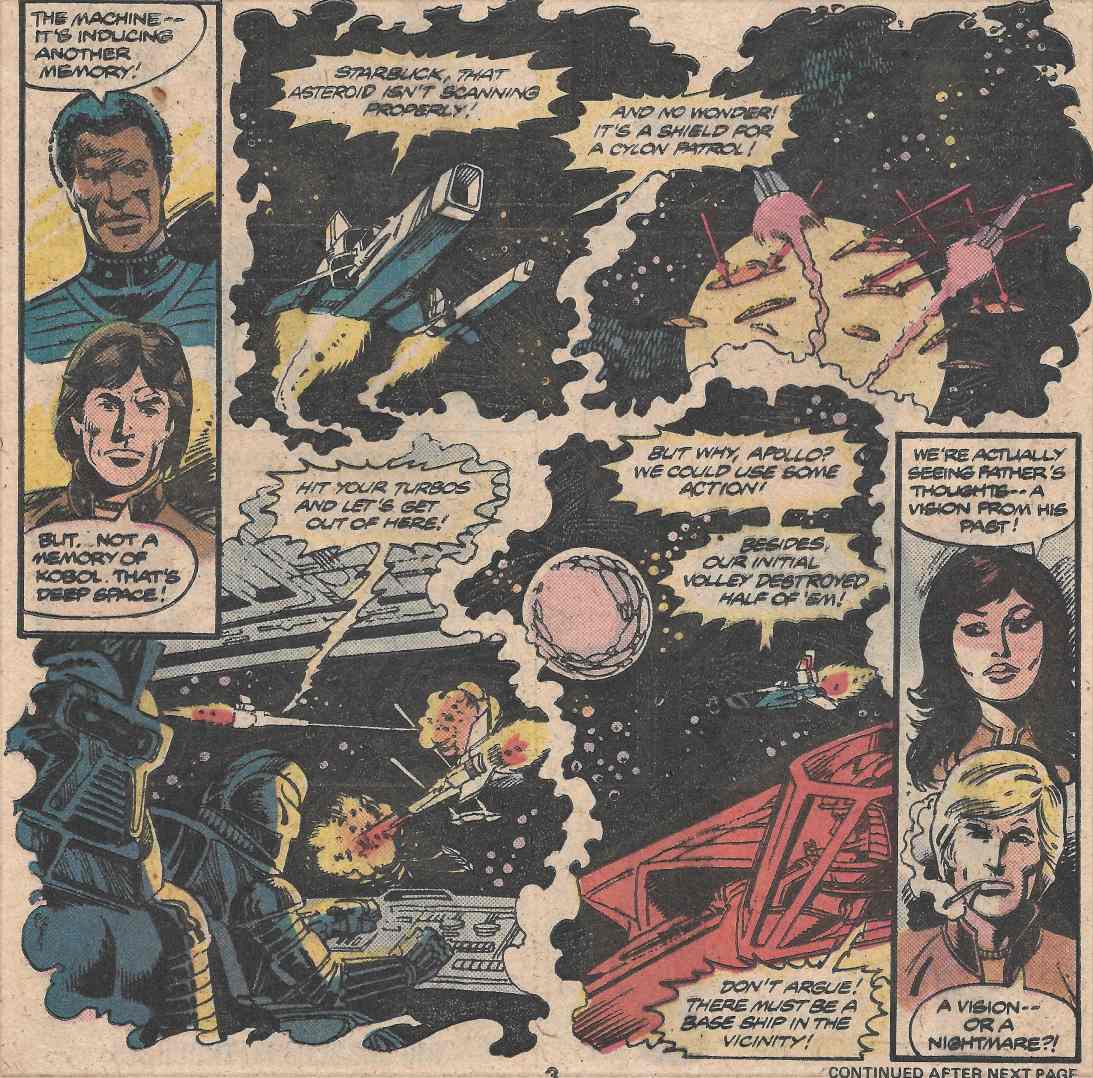 It begins when the Galactica’s long-range scanners notice a strange, huge blip on their radars. Adama sends his two best pilots to investigate. 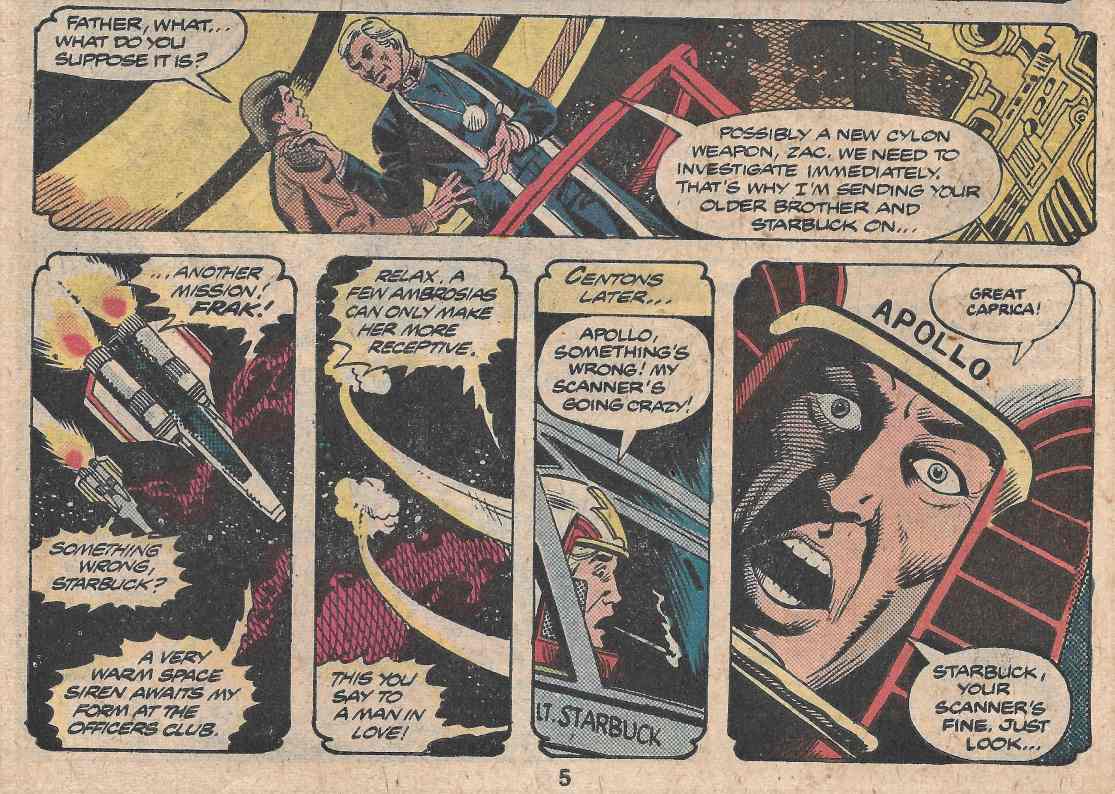 They are shocked at what they find! Mainly because it happens to be a giant floating space-testicle. 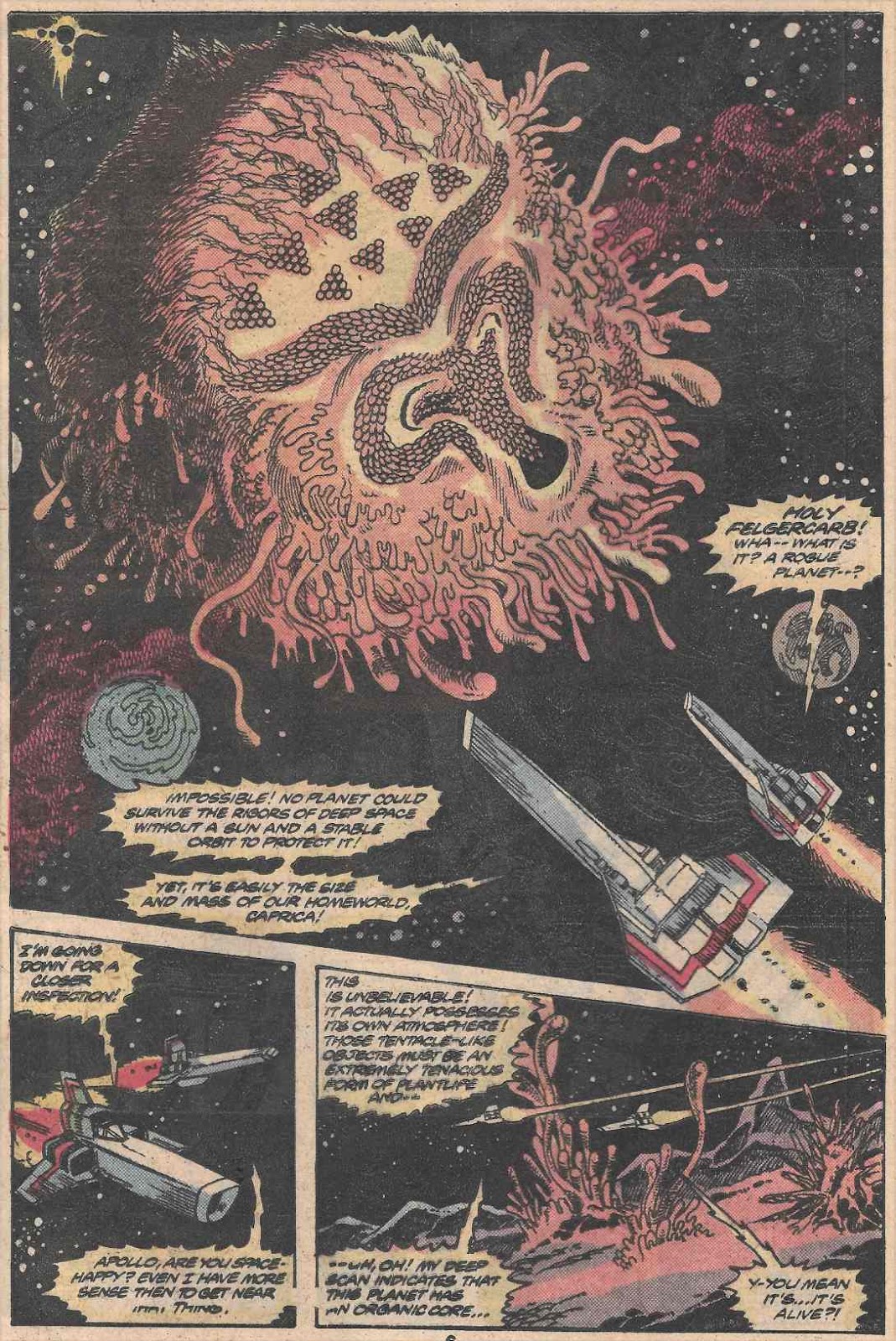 Okay, so maybe at first they think it’s a rogue planet or something, but soon the evidence of their scanners… 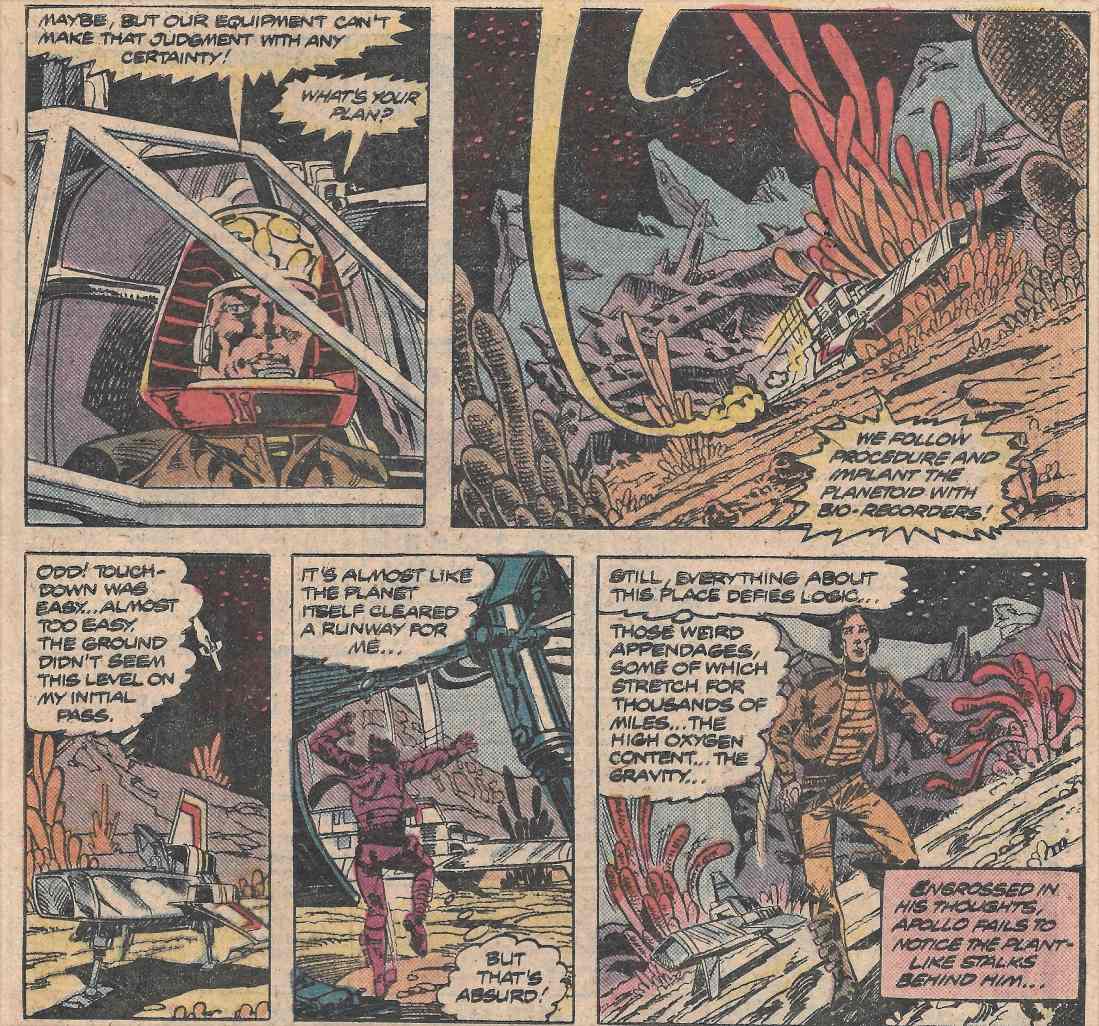 …and their experiences, lean toward this being something completely different. 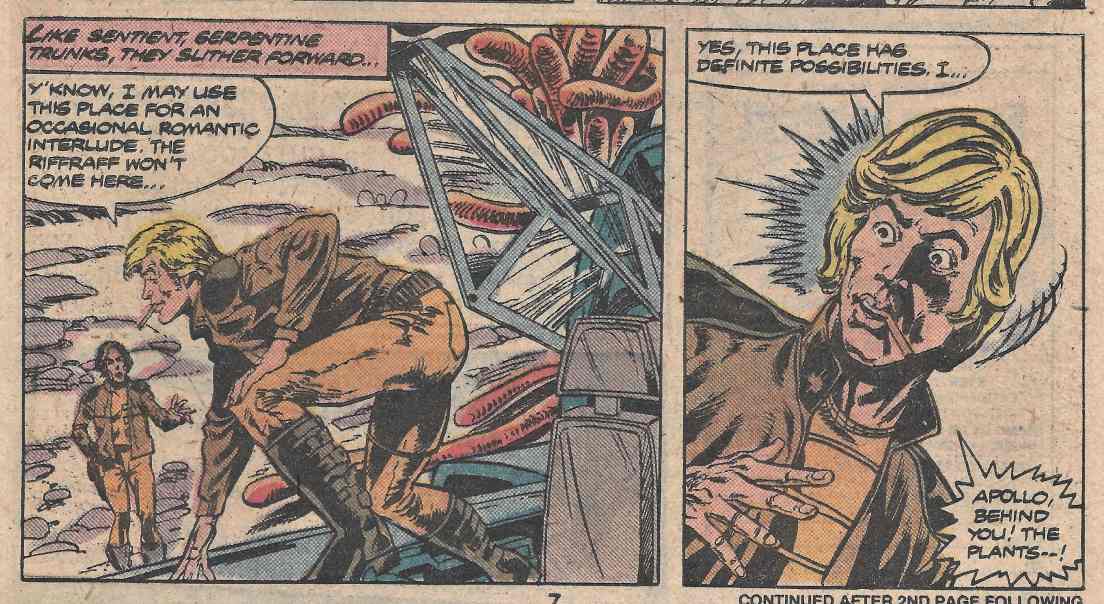 And you’d think that a place this weird would put both of them off, but THEN you’d remember that this was the 1978’s version of Starbuck, a man desperately trying to beat Jim Kirk’s “girl in every port” score. And I think he would follow through on that promise if it wasn’t for these plants… 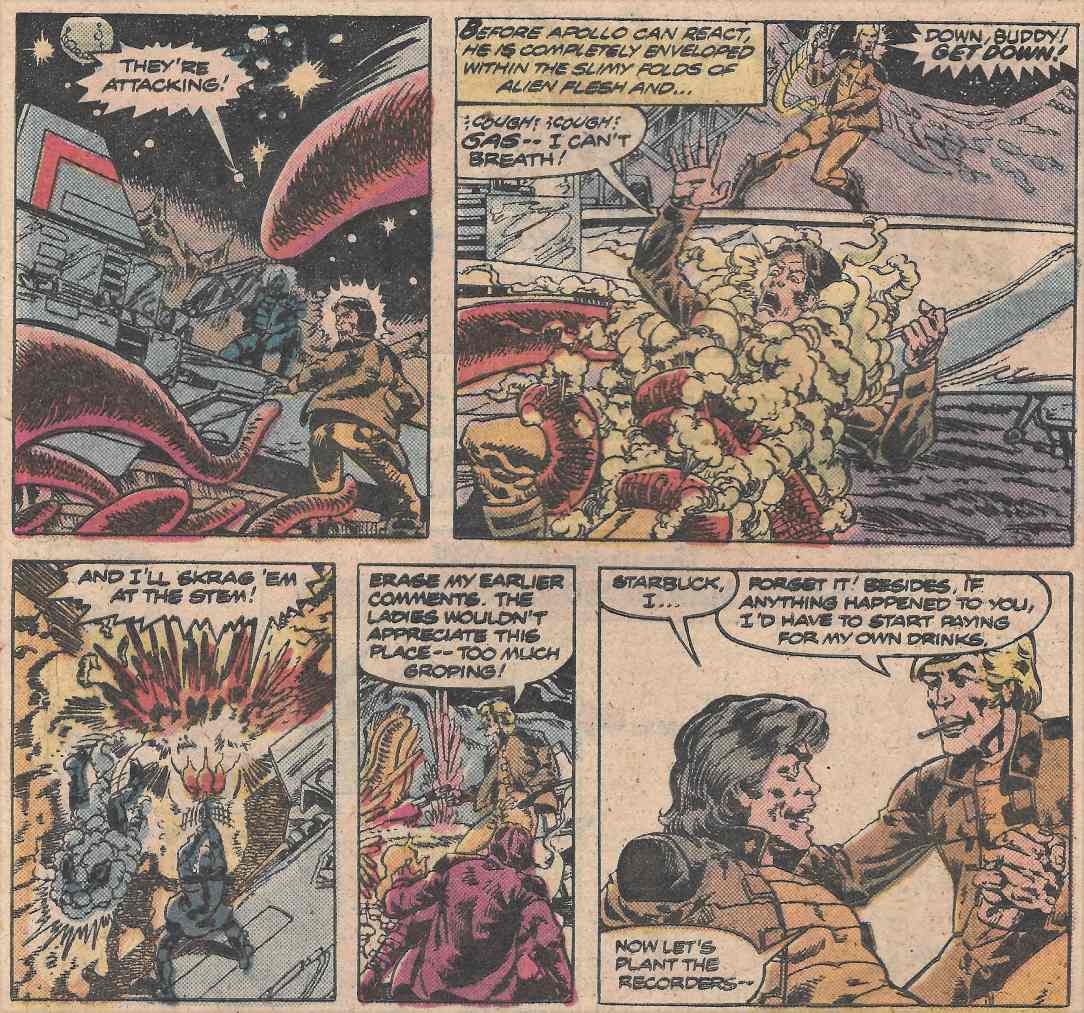 …that sexually assault Apollo. Try figuring out what hashtags to add to that #METOO movement, A-Paul. Just like in the best Japanese Henti, the plant tentacles spooge their nasty gas all over Apollo and then retreat, with Starbuck’s gunfire to hasten their farewell. 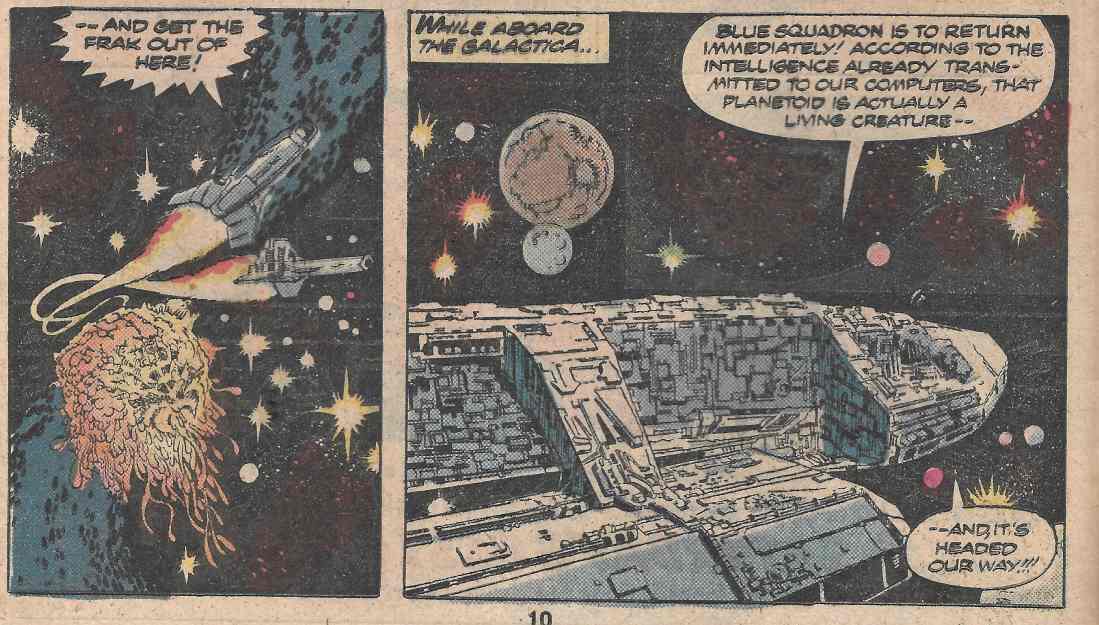 The gents hate to “be groped and run” but they’ve had enough mistreatment at the various appendages of this unknown moon. So back to Galactica they race.

And they arrive just in time for Starbuck to come down with a mysterious case of “space herpies” or perhaps “space face-herpies?” Looks like the boys should wear full body condoms whenever they go for a spacewalk. 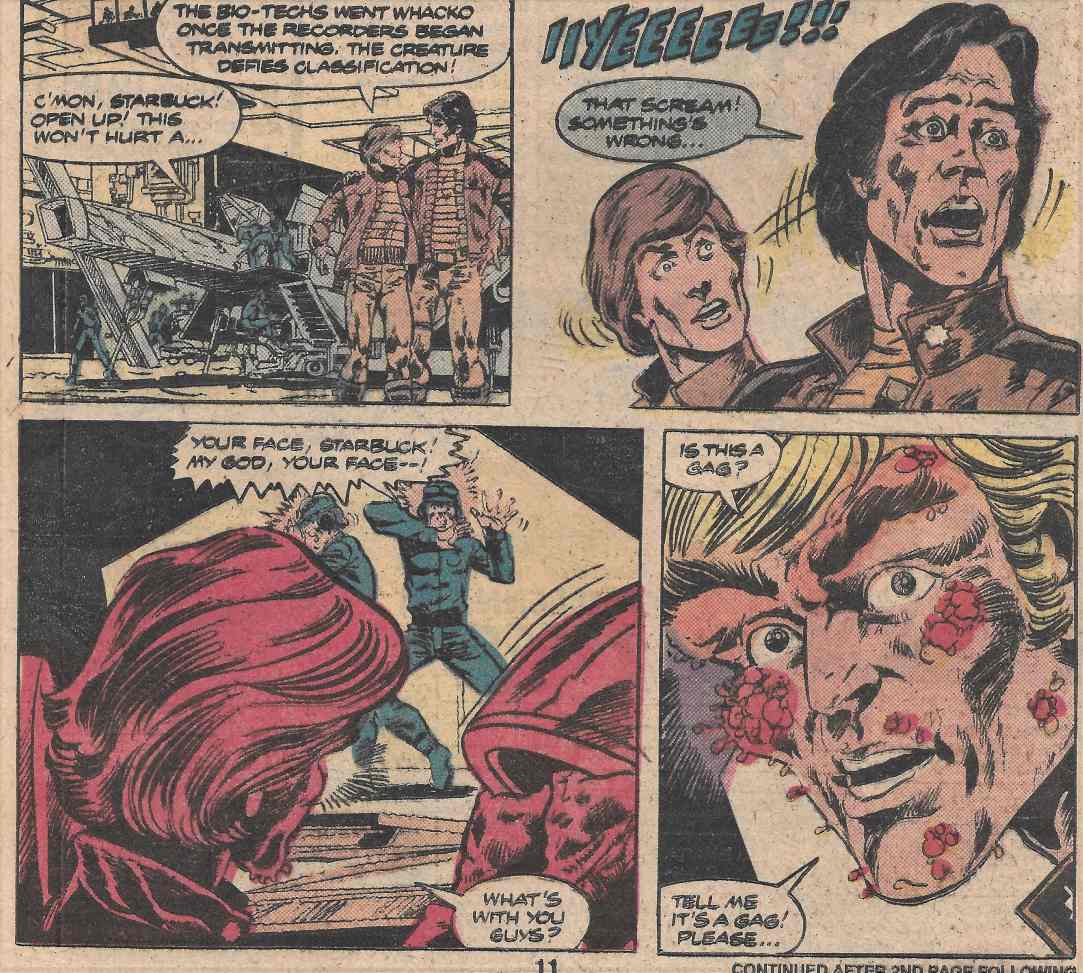 As for it being “a gag,” NO, but your face is now making me gag! 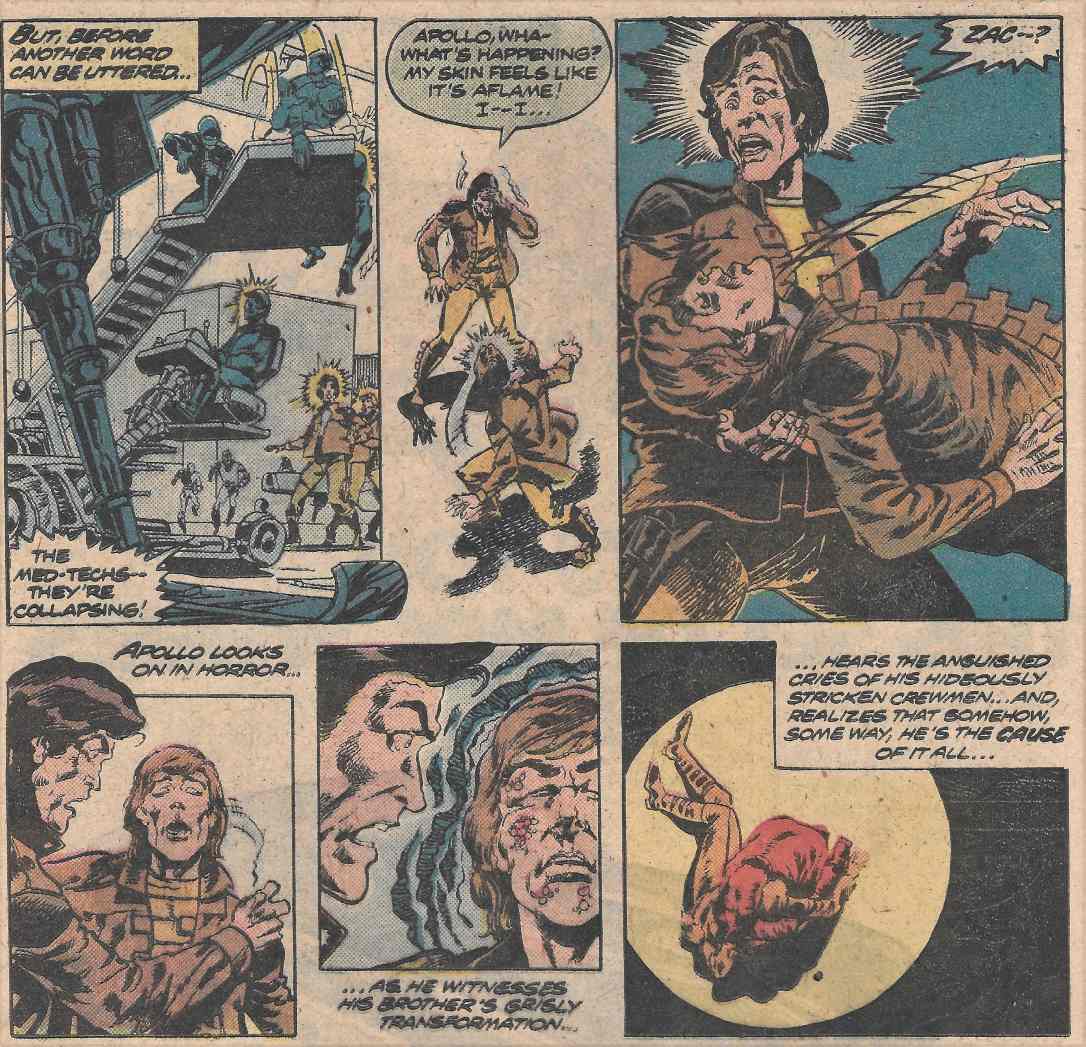 Something on the mysterious planet of probing tentacle plants has gotten him genuinely sick. And that highly contagious whatever infects Apollo’s kid brother Zac in a matter of seconds. So sick, he faints right into Apollo’s arms.

Within a few hours or “centars” or whatever made-up time unit we are dealing with here the ship is ravaged by this plague that makes people look super-gross and unable to get a date for their high school prom. Also, there is some nonsense about it being spread telepathically. 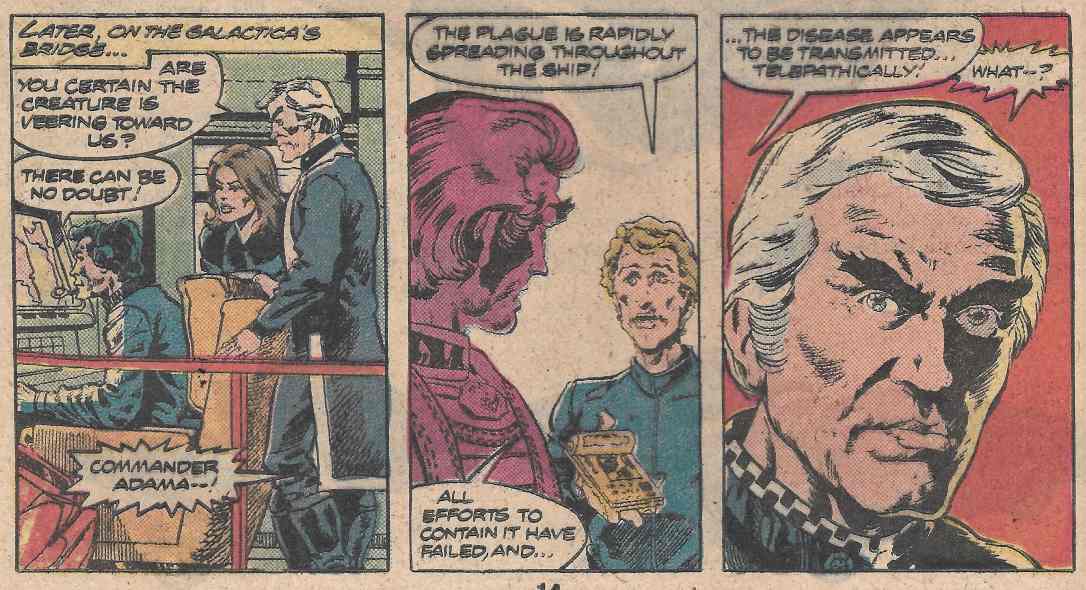 To make matters worse, there are three Base Stars rapidly closing in on them, forming a pincher that is forcing them closer to the giant infectious space testicle. Galactica is truly caught between a robot death squad “rock” and a sweaty diseased ballsack of a “hard place.” 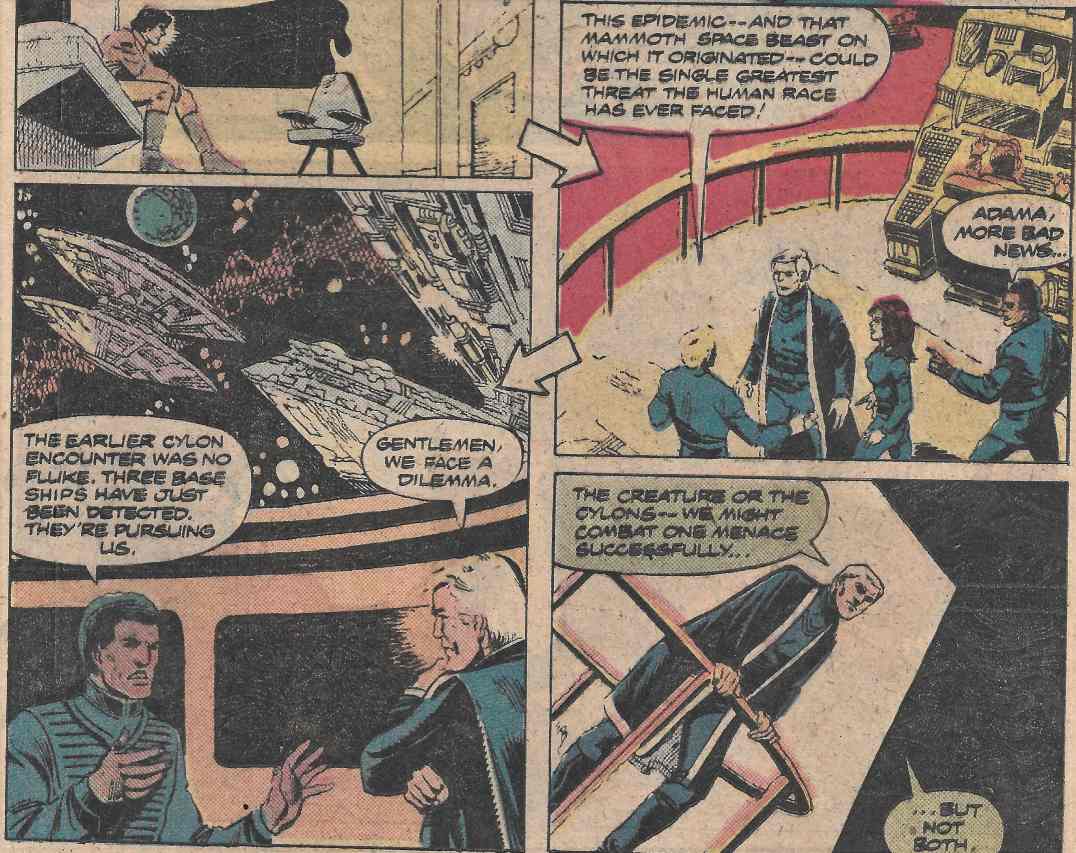 Meanwhile, in quarantine Apollo is having nightmares of being groped by an alien planet, which I’d say is pretty standard for someone who has been touched inappropriately by an entire world’s worth of tentacles. Kid needs some counseling. 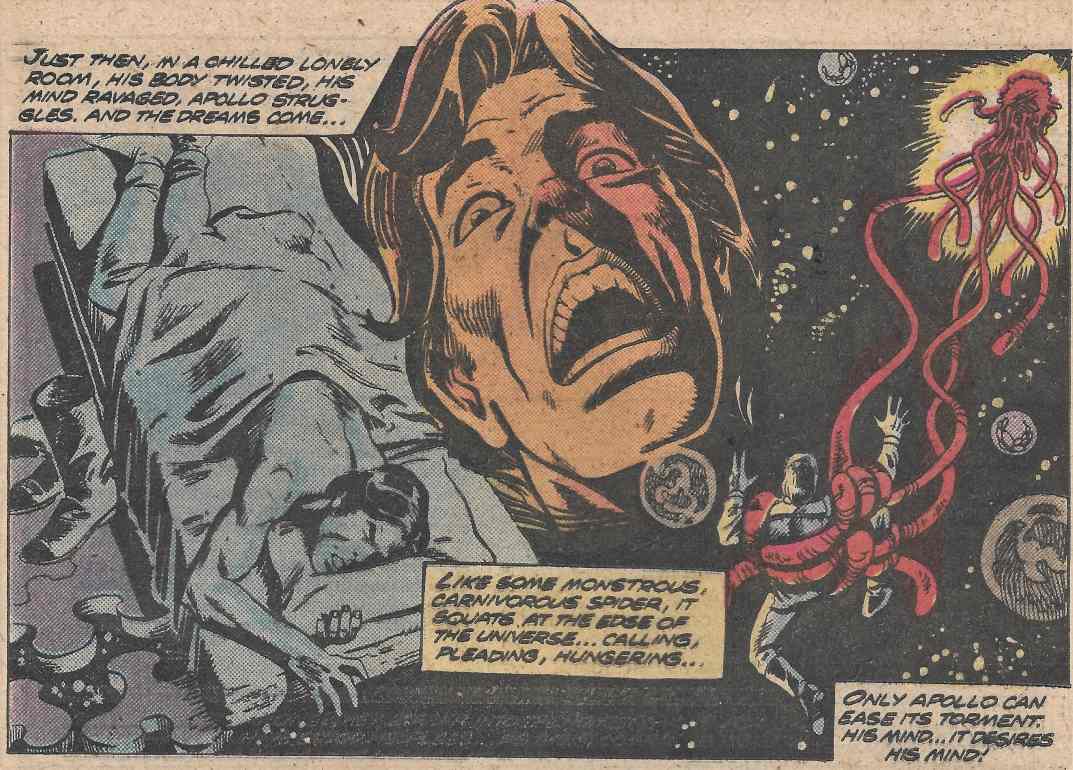 Or something else? Apollo goes nuts and breaks out. While on the other side of the ship, Adama makes the decision to wipe out space ball’s threat to humanity. 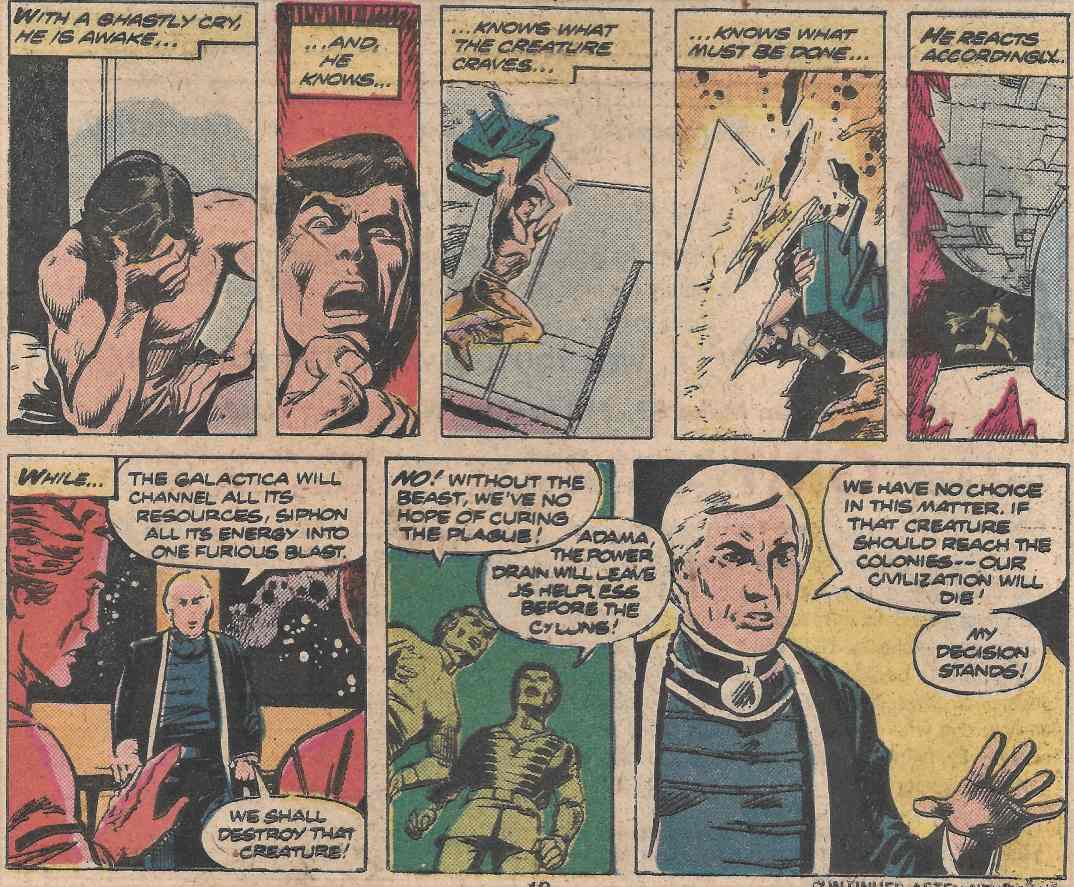 He has to put those plans on hold as Apollo (using a leg longer than his entire body) takes out a guard, steals a viper and heads for the planet’s surface. 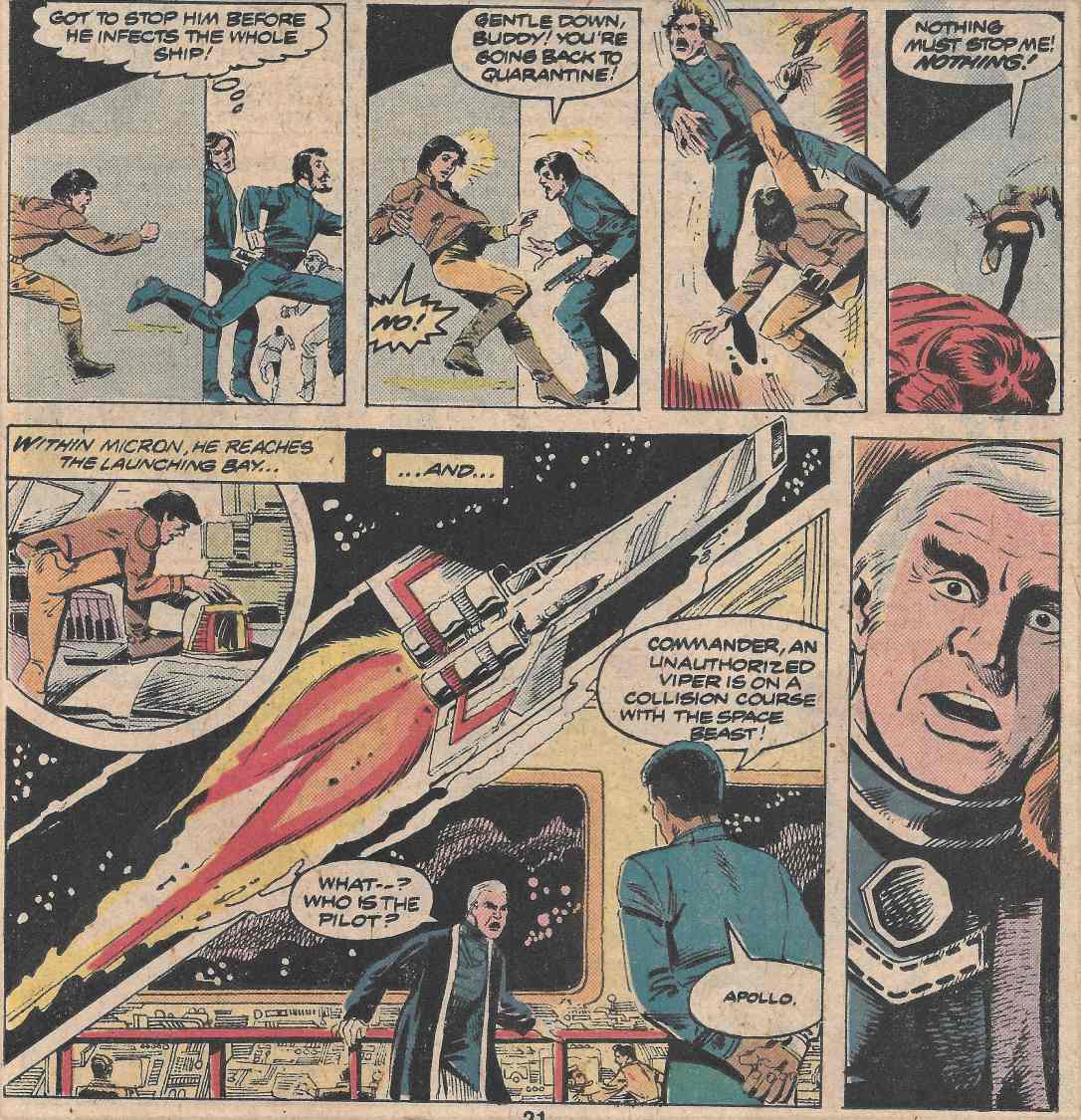 Not that it’s a long trip, as we can see in the next shot. Galactica looks to be dangerously close to getting tangled in some space-pubes. Adama isn’t about to stop his countdown though, and I’m assuming he feels the three Base Stars will take down Galactica anyway. That would account for his unfeeling attitude at nuking his son alongside the giant space nut. 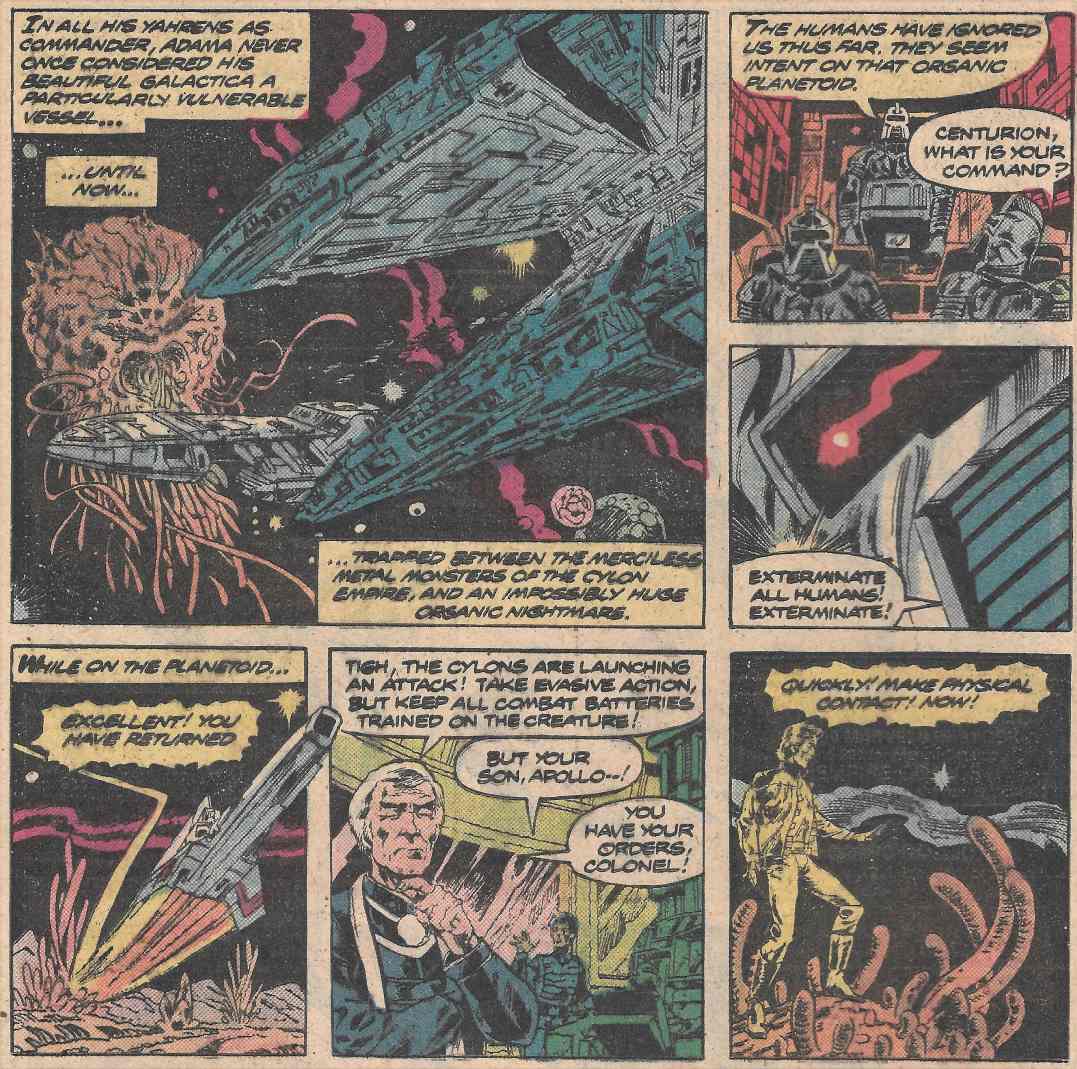 That telepathic plague has something else in mind, however. Adama finds he can’t order his ship to fire on the planet. All this, while Apollo is apparently getting kinky by making “physical contact” with the planet tentacles on the surface. 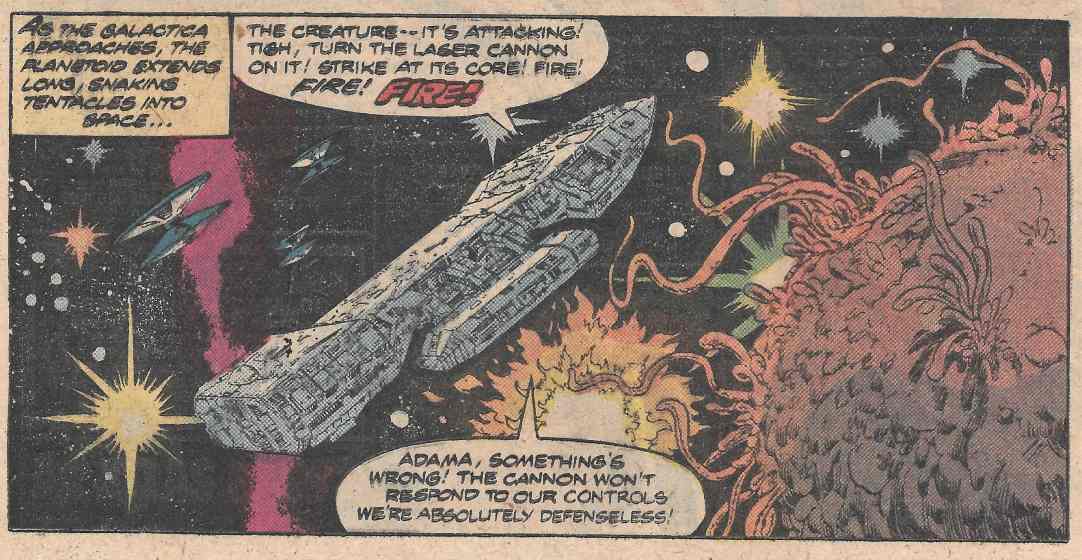 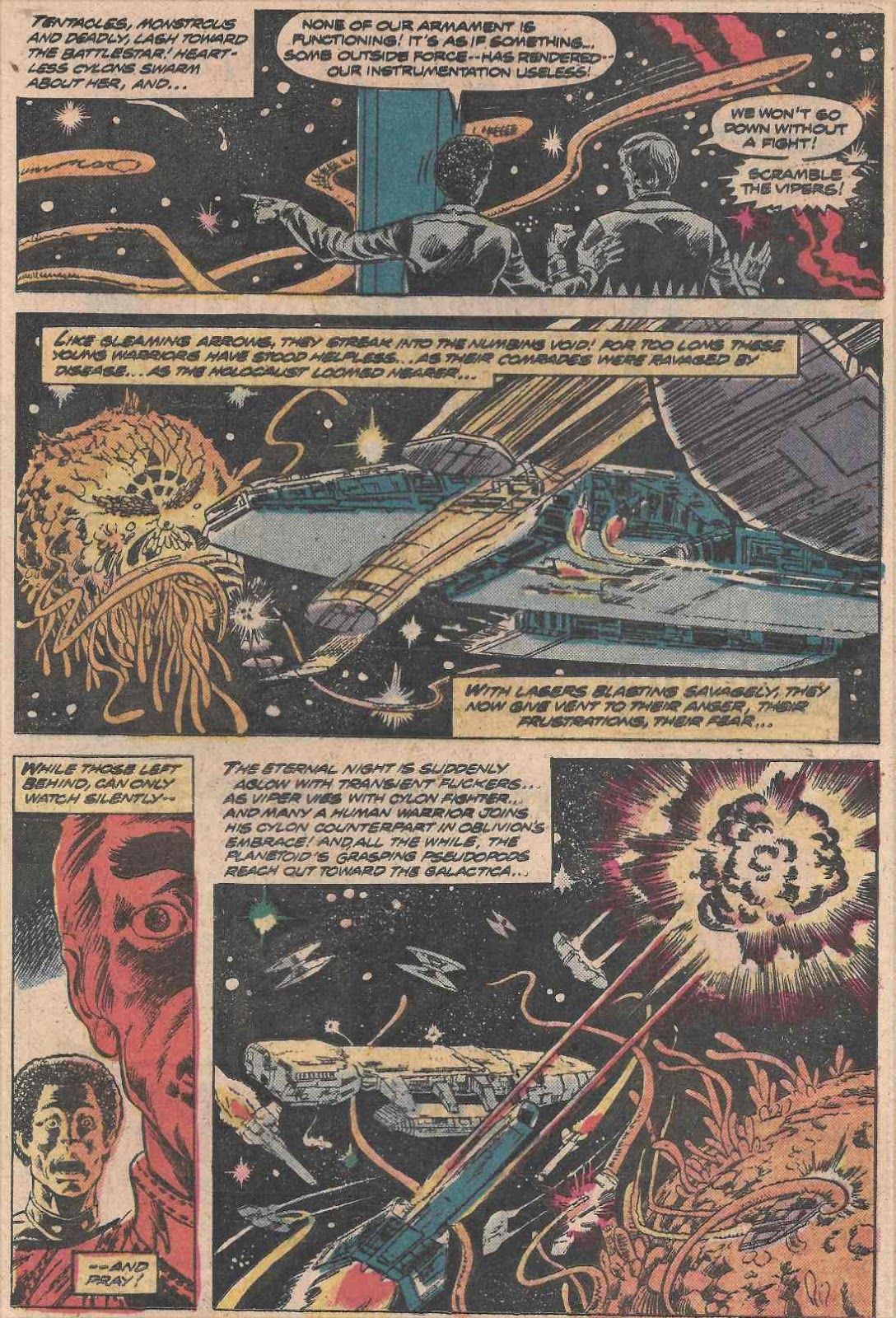 …only for the twist of the story to come: the living testicle is a GOOD GUY! He (naw, I didn’t check its gender in terms of the story, but take my word for it. This one is a “he.”) destroys the basestars and saves Galactica… 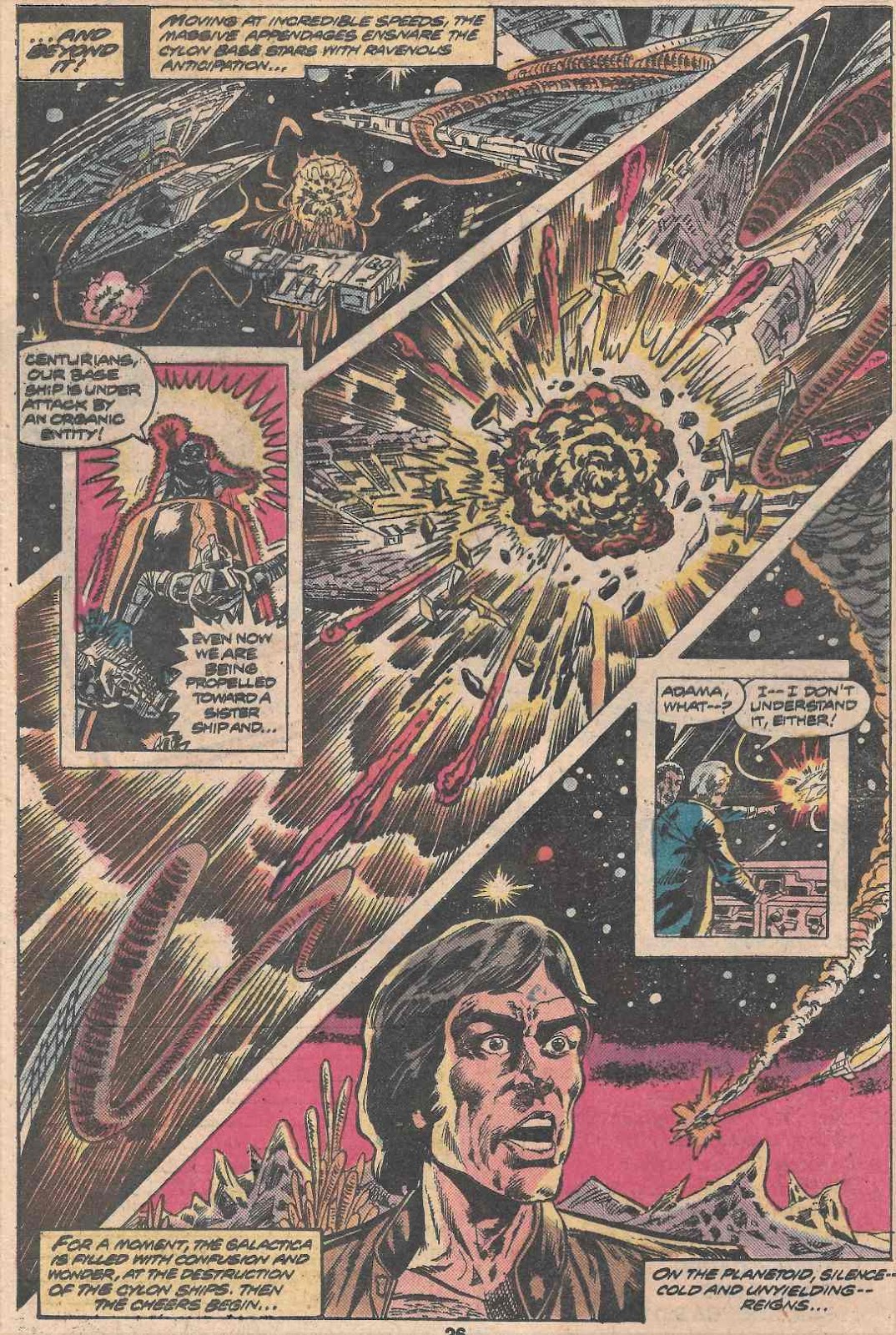 …and afterwards explains that the plague was just its attempts at telepathic communication. Also it mentions being hungry for companionship, which is weird given that Adama’s son is on the surface in “physical contact” with this weird giant space ball. 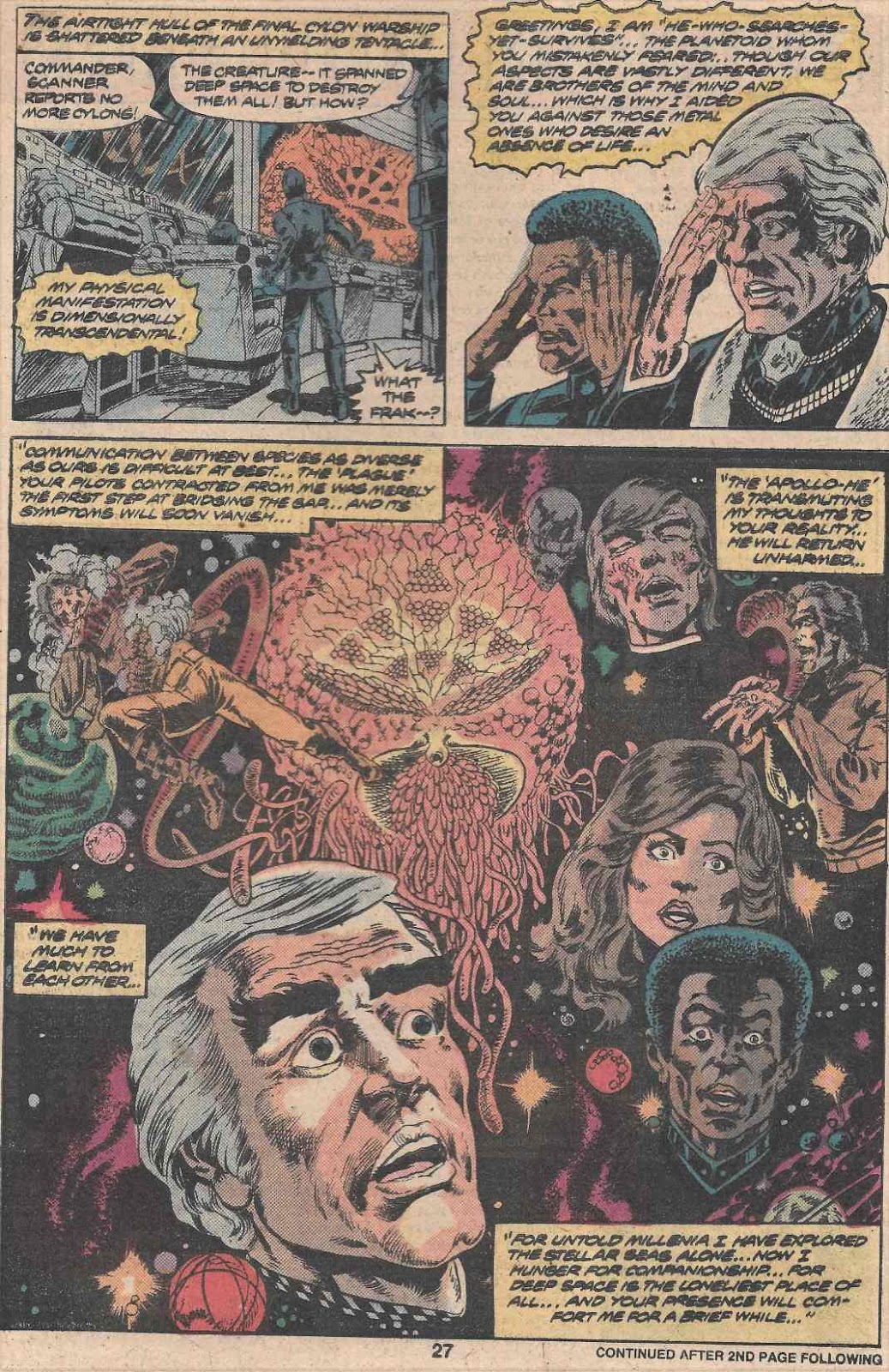 Regardless, Adama realizes he was wrong the entire time…and as the page count at the bottom shows us, he’s out of story time too. Back to the memory-flashback wrapper we go. Back to more warnings that if they don’t free Adama soon he’ll die lost in his own memory. No mention is made of what happen to the very handy giant moving killer space testicle and why it isn’t being used to destroy more Base Stars. 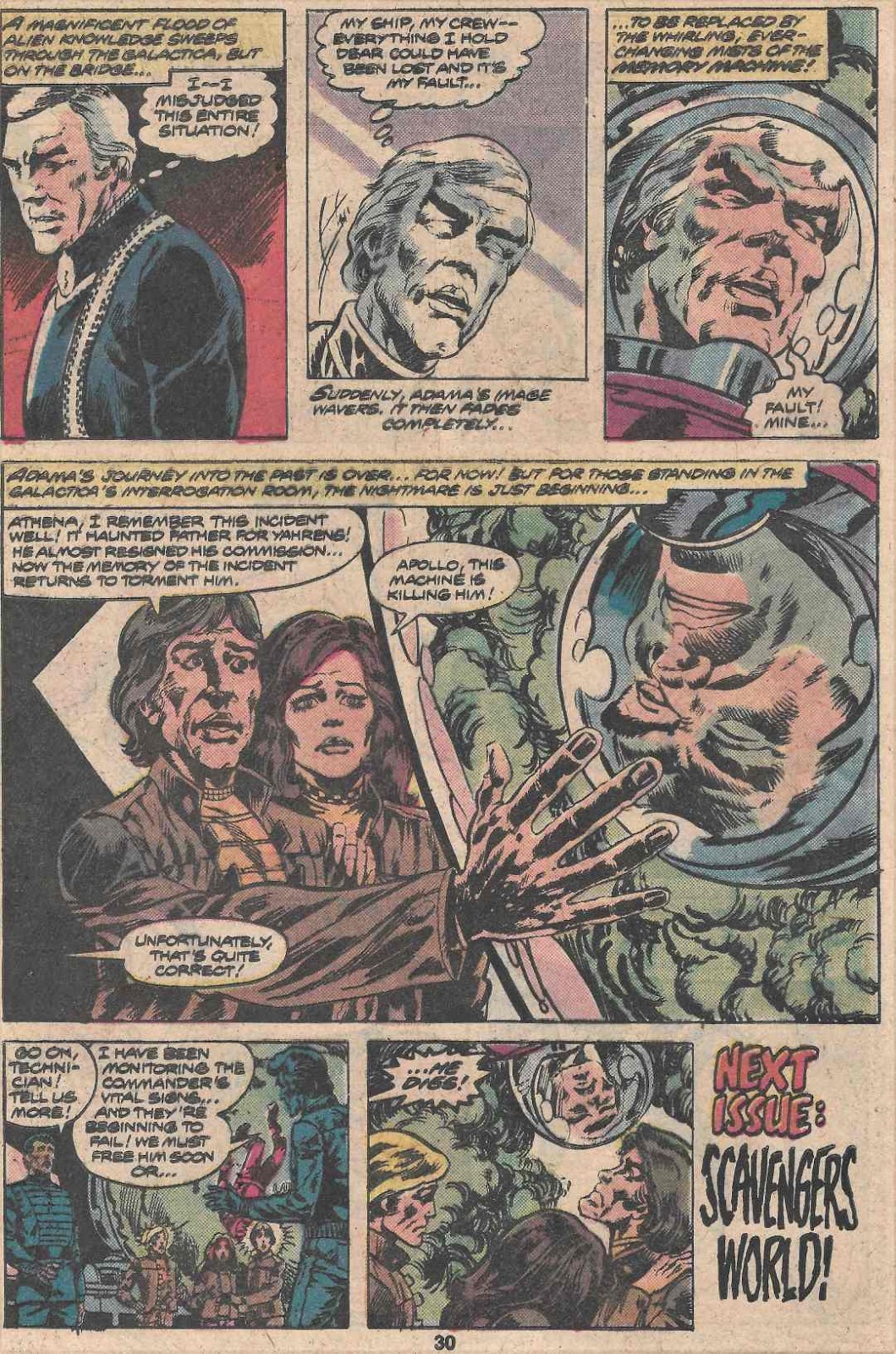 Although, there is a “next issue” blurb about “Scavengers World!” staring in issue number 11. An issue with art by the amazing Walt Simonson inked by the astonishing Klaus Jansen. An issue free of planet-sized, scary space testicles.

They didn’t have the balls to bring it up again, apparently.
Posted by SonOfCthulhu at 6:55 PM 1 comment: