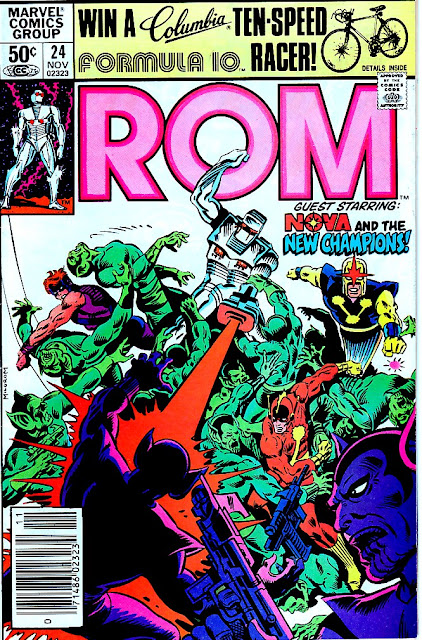 The crappiest toy ever to have a successful comic series

ROM the spaceknight made a mint for Marvel comics. Originally created by Bing McCoy as an Egyptian Mystic doll, ROM was remade as a cyborg in 1979 when McCoy couldn’t find any buyers. 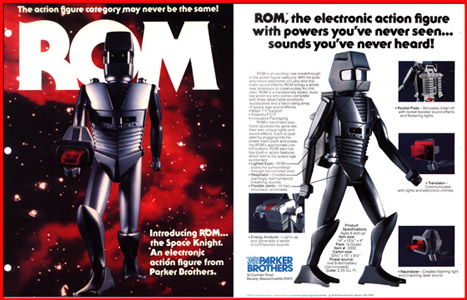 Parker Brothers snatched up the new design and negotiated a deal with Marvel Comics for a series about ROM. A series that would outlast the toy’s shelf life by about five years.

ROM itself was an annoying toy. It had about three points of articulation (shoulders, hips and knees) so it wasn’t very poseable. The reason Rom was such as stiffy was that board game maker Parker Brothers hadn’t released an action figure before. They were cutting costs anyway they could. Originally designed with green LED lights for eyes, ROM got red LEDs instead because the green lights were too expensive. ROM came with a variety of gear to hold in his permanently bent arms, each emitting its own irritating noise. Usually this was a variation of “beep” or the nasty sound your garbage disposal makes when it’s backed up.

I really despise this doll. 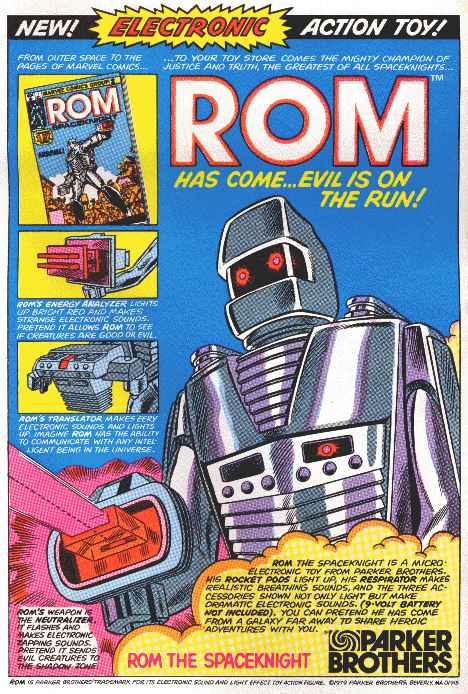 For more on the ROM toy go here

I was 12 years old when ROM came out and even I knew it wasn’t going to be popular. First off, ROM didn’t have any bad guys to fight. Secondly, the rigid arms and the stiff legs gave off the appearance of an “action-less” figure. My 12-inch GI Joe could kick his butt. Even the ones without kung-fu grip. So what if Joe didn’t beep.

I could tell that there was a “cheapness” factor to ROM and getting involved with him would only end in heartbreak. No one wants a toy that is headed to the discount shelves next week. No one wants to be that “kid with the ROM doll.” I didn’t realize back then how right I would turn out to be. Even though ROM sold between two to three hundred thousand units, it was deemed a failure by Parker Brothers. The line was dropped. I never gave the comic a second look, but a very strange thing occurred with the book.

Marvel brought in Bill Mantlo to write the adventures of both ROM and the series based on the Micronauts toys. Mantlo had previously helmed both Iron Man and Thor titles with success.

Something peculiar happened with these two toy titles. Mantlo breathed life into the hunks of plastic, eventually writing both series for more than seven years. ROM got a great backstory, villains and interactions with top rung Marvel heroes. Heck he even got to be Rick Jones’s pal. ROM went on for 75 issues and outlasted the Parker Brothers doll by five years. Meanwhile the Micronauts turned into an outcast team book in the tradition of X-Men. The Micronauts series won the prestigious Eagle award for Favorite New Comic in 1978 and was nominated for Favorite Continuing Storyline. The book thrived with issues well into the late 50’s. Mantlo and a stable of capable Marvel artists had truly taken two sow’s ears and turned them into silk purses.

Given my already outspoken hatred of the ROM action figure, I really have no cause to like the book, right?

Mantlo really knows his stuff and the art by Sal Bucema fits the silver age material perfectly. ROM’s background has him stranded on Earth while chasing a race of shape-shifting aliens known as Dire Wraiths. ROM is a spaceknight from the planet Galador and has been hunting Dire Wraiths after they were defeated on his homeworld. While being stuck on Earth, ROM has discovered the planet to be infested with the evil aliens. Recently the Wraiths showed ROM an image of his homeworld in ruins. This information drove ROM to borrow a Skrull saucer from the Fantastic Four’s leader Reed Richards. Richards programs a course to Galador for ROM and sends him on his way. Sadly, finding Galador isn’t going to be so easy. 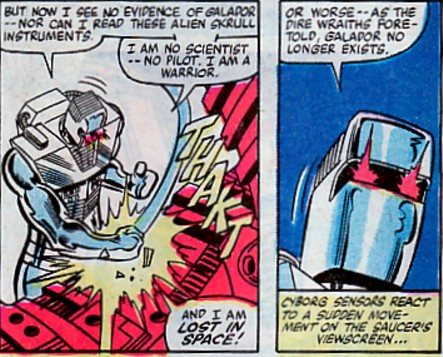 “ROM hate stupid spaceship! ROM smash!” Sorry, I guess Mantlo must have been channeling his days writing Banner’s alter ego. Luckily for ROM, the sector of space he is in isn’t uninhabited. I guessing this plot twist was planned in advance because there’s nothing like drifting in space for several issues to really put a book on the top of the sales charts. So who is it that’s racing to intercept our hero? 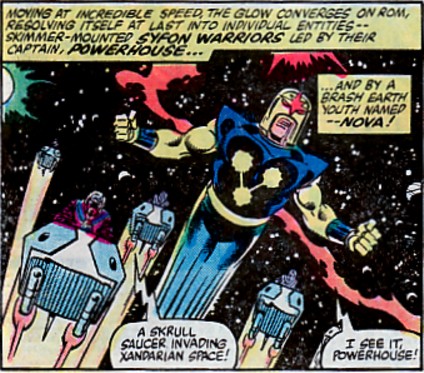 Why it’s our old friend Nova and the ex-villain Powerhouse. They are zooming closer and closer to us. I wonder if they will be our friends? Not likely, given that we are riding in a Skrull saucer and Xandar, the world Nova is the protector of, is currently at war with the Skrulls. Oopsie?

After fielding a few potshots to his saucer, ROM flies out an airlock to take the fight to them before they damage his space ride. Powerhouse is up first, but ROM causes the lad’s draining power to work in reverse. Leaving Powerhouse's unconscious body floating in space, ROM becomes the target of Nova. 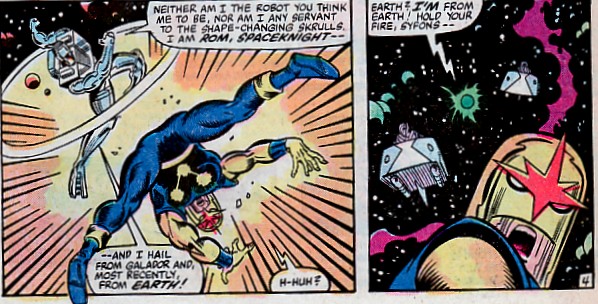 I guess we know whose book this is. ROM tosses Nova around like a Frisbee, but gets a free pass to Xandar by mentioning Earth and then recounting his origin story. He also happens to mention what it is he’s looking for. 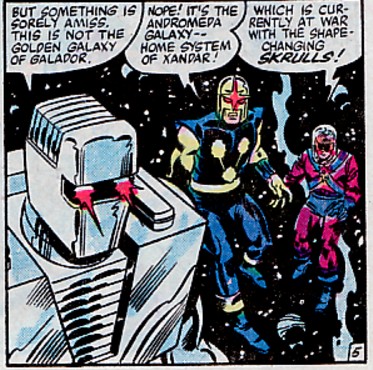 I’m sorry but “the golden galaxy of Galador” sounds like a breakfast entrée at IHOP. I believe it comes with a large Belgium waffle, two pieces of bacon, a slice of ham, one egg any style, a small Orange juice and a Coffee. But enough about breakfast, on to the planet Xandar! 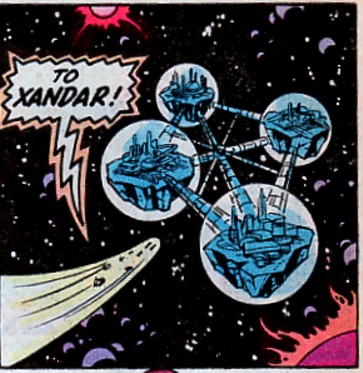 Okay, make that “on to the four floating blobs of crap strung together like some high school biology model of DNA that we call the planet Xandar.”

On Xandar, we meet Queen Adora, Suzerain of all Xandar, who may know the way to Galador. This makes ROM happy. 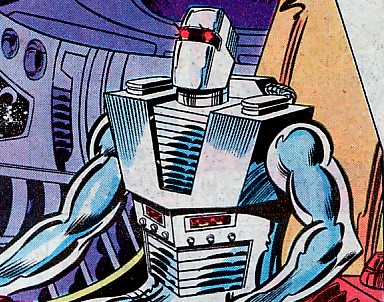 But Queen Adora doesn’t know the way to Galador, she’s never heard of it. This makes ROM sad.

However, the Queen tells him that Xandar has giant living computers that might be able to find Galador. This makes ROM happy.

Except for the fact that Xandar’s Prime Thoran transferred all their knowledge into himself becoming The Protector, so now the computers are useless. This makes ROM sad.

But now that the The Protector knows all that the computers knew, he can tell ROM where Galador is. This makes ROM happy.

Unfortunately, The Protector left with the rest of the New Champions to pursue the Skrulls in Nova’s spaceship and hasn’t been heard from since. This makes ROM sad.

When suddenly, a message arrives stating that The Protector has returned with the New Champions in Nova’s ship from defeating the Skrulls. This makes ROM happy.

BUT when The Protector and the New Champions beam down into the midst of the gathered Xandarins, all they offer Queen Adora…

All the people that beamed down are Skrulls in disguise. This makes ROM sad.

Anyway, ROM starts blasting the Skrulls while Nova sets off to rescue his captured friends. Diamondhead has sided with the Skrulls and starts using his knowledge of the ship against Nova. Forced to attack his own spaceship, Nova cuts loose. 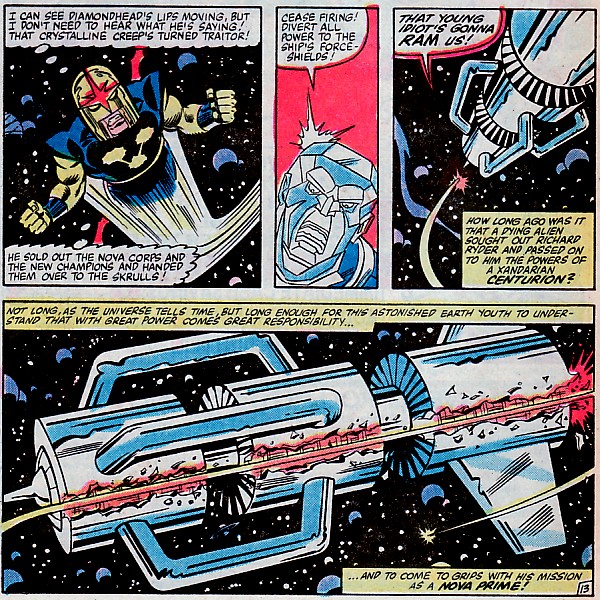 Nova gets better scenes here than he did in his own title. Way to go, Richard Ryder! All the Skrulls are sucked out into space, leaving only Diamondhead on board. He’s no match for a frustrated and mad Nova.

After leaving Diamondhead to float helplessly in space, Nova finds and rescues the Nova Corps, New Champions and The Protector. Meanwhile, ROM’s been pretty busy himself. 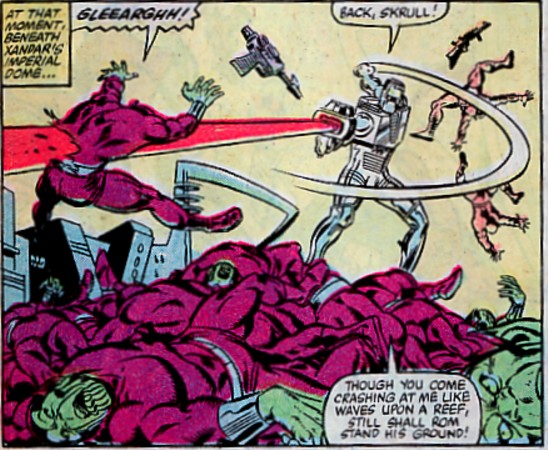 This makes the Kree look pretty damn wussy is all I’ve got to say. One, count ‘em, one spaceknight is handily decimating the attacking Skrull force. He has defeated so many enemies that he has to literally stand on top of their fallen bodies so he can shoot some more. Captain Mar-Vell, eat your heart out.

Nova and friends arrive, the Skrulls are captured, and everyone has a happy ending. Nova is beamed back to Earth and ROM is beamed to Galador. The next issue setup comes in the final two pages showing that something is wrong with ROM’s friends on Earth. They are acting strange, perhaps they’ve been possessed by Dire Wraiths?

Only buying the next issue would tell, which many, many readers did.

I wanted to say a few words about Bill Mantlo. Bill was a great writer. The few issues I had the pleasure of finding in his Micronauts run were some of the best, most involving comics I’ve ever read.

Unfortunately Bill Mantlo was struck by a car while rollerblading in 1992. He suffered severe head trauma and spent over two weeks in a coma. He has since been institutionalized and is not expected to fully recover.  An article covering Mantlo's condition that will tear at your heartstrings is located HERE.

A benefit project for Bill Mantlo has been set up offering a book called Mantlo: A Life in Comics filled with interviews of Bill and an unreleased story by him. All proceeds of the book were donated toward the costs of maintaining Mantlo’s daily care. Currently the book is out of print, but if you would still like to make a donation, see the link below.

If you can, please give generously to someone who has given us so very, very much.

A link the project can be found HERE.

Posted by SonOfCthulhu at 6:21 AM