Kid's Stuff, Part XVII and Strange Team-Ups, Part I: G I Joe and the Transformers #2 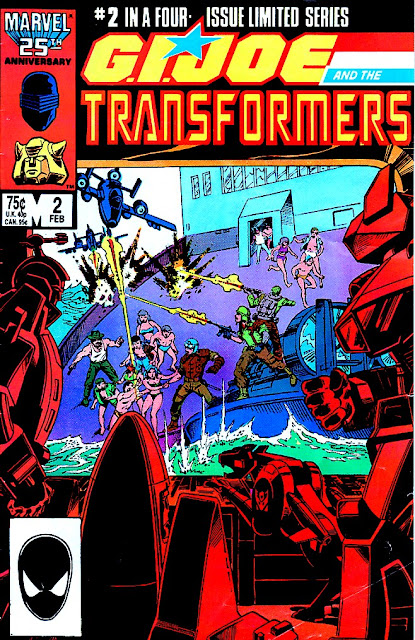 G I Joe and the Transformers was a four issue mini-series produced by Marvel in 1986. By then, both of their solo books were going full steam and the time seemed ripe for a crossover. Sadly the series suffered from trying to be too faithful to the existing storylines in each of the ongoing series. This meant that several key characters (Optimus Prime, Cobra Commander and Megatron) were left out of the crossover because their characters were all presumed dead at the time.

Talk about wimping out. That’s like having a Star Wars and Star Trek crossover where the only major characters to show up are Chewbacca and Wesley Crusher.

As issue 2 begins, the G. I. Joes have just killed Bumblebee in the prior issue. At least that sounds exciting, if a bit of a downer. The transformer Superion arrives at the Joe’s base to collect the remains and is met by some startled Joes. 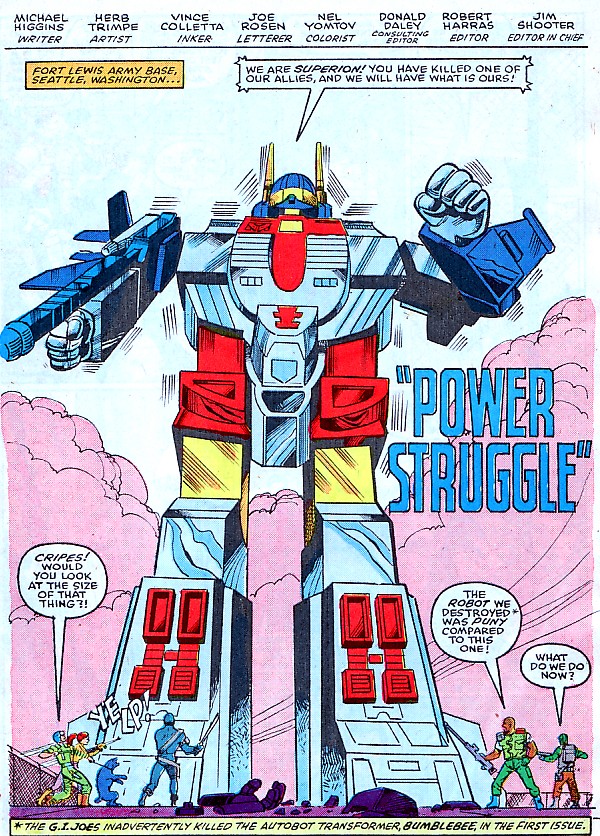 The correct answer here is “When confronted by a powerful, giant, sentient robot with the ability to step on you the way you would a hamster, fire wildly at it in hopes that your shots will somehow find a weak spot in its nigh-impregnable armor. Also wet your pants a little. It’s okay, we won’t tell anyone.”

That’s what the G I Joe handbook says anyway. Wonder who writes that thing? 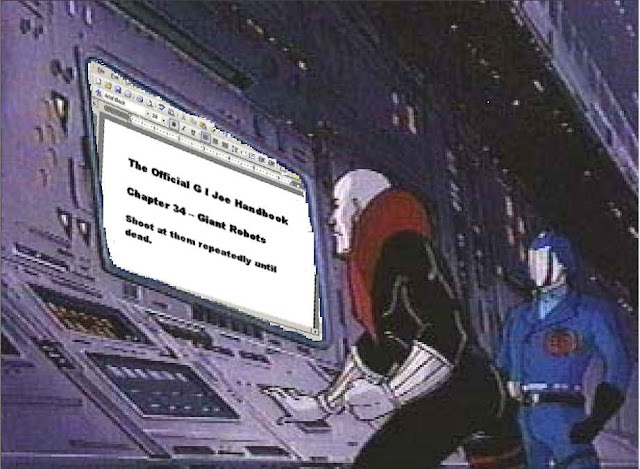 I kinda thought that is who it’d be. Anyways, as the Joes continue to pelt the Transformer with enough ammo to take over a small country, Superion decides not to squash them all like the insignificant mammals they are. He’s nice like that. 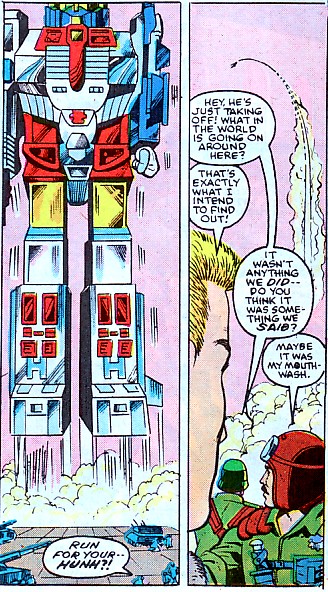 The Joe that’s asking about his mouth-wash is the newest Joe in the line up: Hal Toesis. His action figure comes with “dung poo breath”. Yeah, I went there.

The leader of the Joes, General Hawk gives the troops a pep talk asking them to get to the bottom of the appearances of the giant robots. Then Hawk steps out to get some assurance that government appropriations for the G I Joe program don’t get cut. At least that’s what I’m assuming from this series of panels. 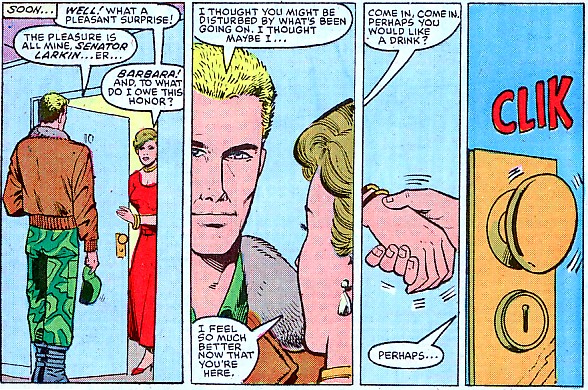 That’s one dedicated solider! He’s had to make sure his funding isn’t cut about six times this week. Twice on Tuesday alone!

We next turn to the villains of the piece starting with the Decepticons. Shockwave is deciding to try and usurp leadership of them again since Megatron has apparently fallen in love with the spaceship thingie the Joes are guarding, Power Station Alpha. Here the lovelorn leader of the Decepticons is pining for the totally non-sentient hunk of metal. Isn’t this a bit like a human falling in love with a blow up doll?

Meanwhile Cobra has taken an interest in Power Station Alpha themselves. Dr. Mindbender takes control of the space plane and causes it to take off from the Joe’s base. General Hawk is caught with his pants down on this one.

Literally! Joe knows he has to go after the missing super secret advanced technology space power house thing. But Senator Larkin a/k/a Barbara has some special instructions for him.

I guess it’s fair to say that Hawk isn’t allowed to keep his balls. Probably why he allowed the space power plane whatever to get stolen in the first place. Now the Joe team has to scramble to get it back. I wonder if any of them are harboring a grudge against Hawk for causing so much work? If they do, none of them say anything about it.

Cobra sends up a fighter wing to escort their new prize home. The Joes take them on until Serpentor has the Cobra troops threaten and then sink a passenger cruiser as a delaying tactic. Correction: it’s either a delaying tactic or it means Serpentor hated “The Love Boat”. This allows the Cobra agents to escape with the plane. All goes well for the terrorist organization until this guy shows up. 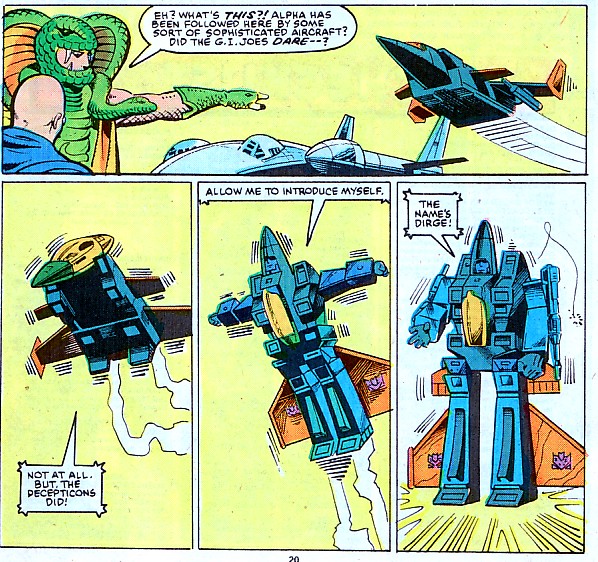 Dirge makes with the sweetness and light talk. Dr Mindbender doesn’t trust this robot proclaiming itself Cobra’s ally, and with a name like Decepticons, who’d blame him. The scene then shifts and we check in on poor, poor Anthony Duranti. He’s been acting strange since issue number one and his Mom’s taken him to the doctor. The results are in and they aren’t good. 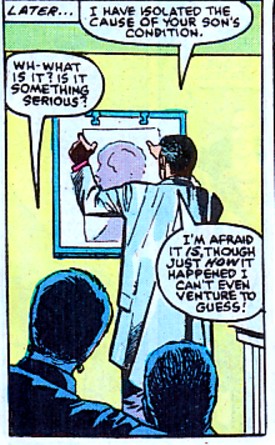 “I have no idea how your son fit several toy action figures that far up his anus. It’s like a warzone in his colon.” Maybe I better let the doctor finish. 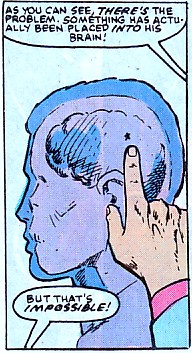 Mrs. Duranti was about to add “... My son doesn’t have a brain.” Common for parents of teenagers to think that. What this has to do with giant robots and anti-terrorist operation groups, I have no real clue. But speaking of clues, Dr Mindbender gets one as the secret recording device he placed on Dirge allows him to eavesdrop on the Decepticon’s conversations. Is it possible their plans are more diabolical than Cobra’s? 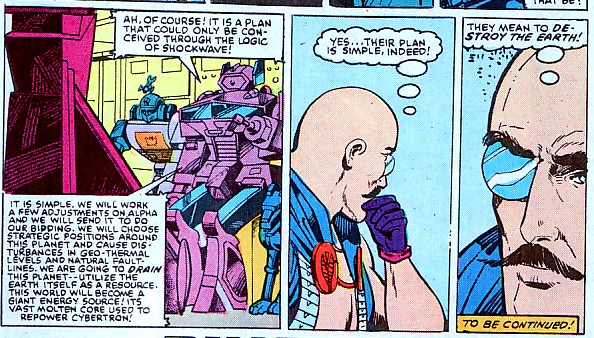 Why yes, indeedy. Now what can Cobra do about it? Why, team up with the Joes of course.

Which they did. The mini series was completely ignored in Marvel G I Joe continuity. However it was essential reading for Transformers fans, as Bumblebee was reborn as Goldbug and if you didn’t read the mini, you had no idea where he went.

Devil’s Due revisited the idea of putting these two groups together in 2003. The first mini featured an alternative universe where Cobra controls some of the autobots, including Optimus Prime. The story was well received by fans (since it was an “Elseworlds”-type tale, why quibble over vast changes if the resulting story was entertaining, I guess?) and spawned three more spin off minis. The last occurred in 2007. And who knows what the future will bring for these guys. Maybe they will do more that glower at each other from across the toy shelf aisle in 2016.